Because of a very large trade fair in Düsseldorf, we are actually staying in Cologne. So after checking into our hotel, we headed down to Düsseldorf.

The first order of business was some sustenance, so we walked by Schweine Janes for a Schweinebrötchen -- a slice of rotisserie roasted pork on a crusty roll. Don't tell my Doctor you saw me eat this.

So then it was to Uerige for one of the best beers in the world.

After a few outside, we moved inside to a table. It was Goulash day so I had a boll of Gulash as further sustenance.

Monday is also Potato Pancakes day, so some order them.

Soon it was nearly 6pm (local time). We have a tradition going back a dozen years, where we stand in front of a webcam and wave to those who couldn't make the trip. The locals think we are a bunch of crazy tourists because they don't know about the webcam.

Next stop was the newest brewery in Düsseldorf, Kürzer. But along they way I just had to take a picture of another pork stand, named Ham-Ham


They have an unusual dispensing system. It is a glass "barrel" filled from a serving tank in the basement. Once in the barrel it is gravity dispensed just as in a wood one. A great mix of the old and new.

The beer is nice, but I am not sure it has the "legs" to stand up for a long session. After a couple I found myself getting a bit bored -- something that doesn't happen at the other Altbier houses.

Then it was on the Füchschen for -- wait for it -- another alt. Füchschen is much improved at a low spell a few years ago (brought about by some equipment changes)

After a few here, it was off to Schumacher who has a new Anniversary beer, 1838 (the year they were founded, making the them the oldest brewery in Düsseldorf0.


It had quite a bit more hop character -- including some grapefruit notes which usually means American hops. Very, very nice and better (I think) than their regular beer. 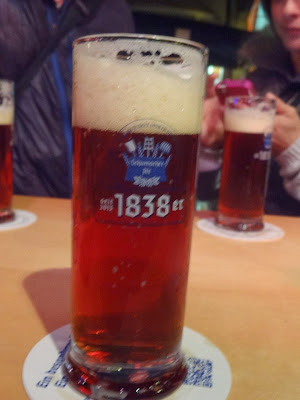 I have a new portable LED fill in light so I placed it under the beer for a dramatic effect. That is about as fine as art a you are going to get on Düsseldorf pub crawl.

Hi ! I have read your experience as far as Dusseldorf. Fun is not the way. Thank you for sharing your experiences and knowledge about holidays. impi.com