We caught a bus at the ZOB at 10:00am and a half hour later we were at Brauerei Wagner in Merkendorf.

Most chose the Lager as their second beer.

I especially like the entrance mosaic, as the initials are the same as mine...

Then it was down the street to Brauerei Hummel. Six draft beers here. 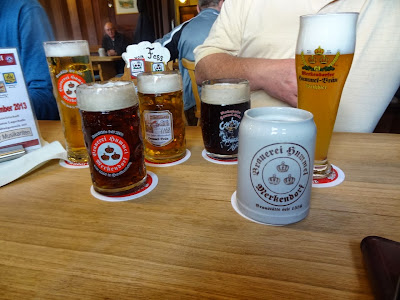 We had lunch and another beer. Then it was time to catch the bus back to Memmelsdorf, were we had a quick beer at Höhn.

I haven't had their beer in a few years. It was perfectly drinkable and I can see why some people find it to be a favorite.


Then it was couple doors down to Drei Kronen where they had three beers on draft, a "Frankisches Altbier" (FrAlt), the Keller-Pils and Stöffla (their lightly smoked lager). Herr Straub stopped by for a hello and then rushed back to the business of running a brewery. 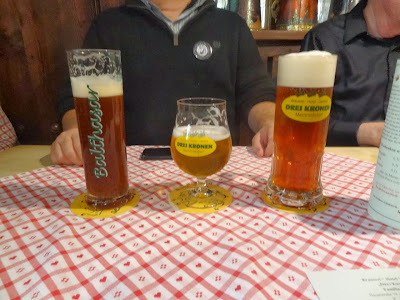 Then it was back on the bus for the short ride to Strassgiech and Andy Gänstaller's tap room at the old Drei Kronen pub.

First up for me was the Kellerbier, while other's had the Zwickel Pils


Soon after dinner, the Zwickel Pils ran out and Andy tapped his latest experiment, a stein bier. This was his second version, called "Rocks II"

There was a bit of smoke character, from the hot rocks and a nice bit of caramel from the caramelized  wort on the rocks. A very drinkable and interesting beer.

We were staring at the chalkboard menu which had a strudel listed so most of us broke down and ordered one. 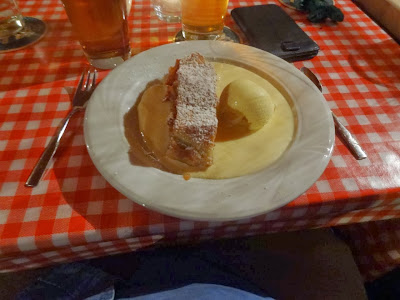 Andy then brought out some of his more exotic beers, a 8+% highly hopped smoked lager he calls IPS (India Pale Smoked). I didn't think smoke and hops went together, but he mad it work. 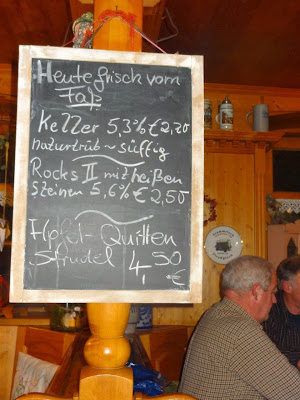 Then he brought some bottles of his Baltic Porter (has a long name with "Riga" in it but I was too busy drinking). We had this last December when it was fairly new and it has only improved with time.

By now we were ready for a cab back to the rooms and we were so beer and fooded out it was straight upstairs, do not pass go, do not drink a beer at Spezial.