Across the IJ in Noord Amsterdam is a former shipyard and industrial complex called NDSM. As is happening in lots of places, it is being developed into a housing and business complex. In one of the former warehouses is a new bar/restaurant called IJVer. Behind Centraal Station is the GVB Ferry Terminal were you can ride a free ferry to NDSM (and other places). 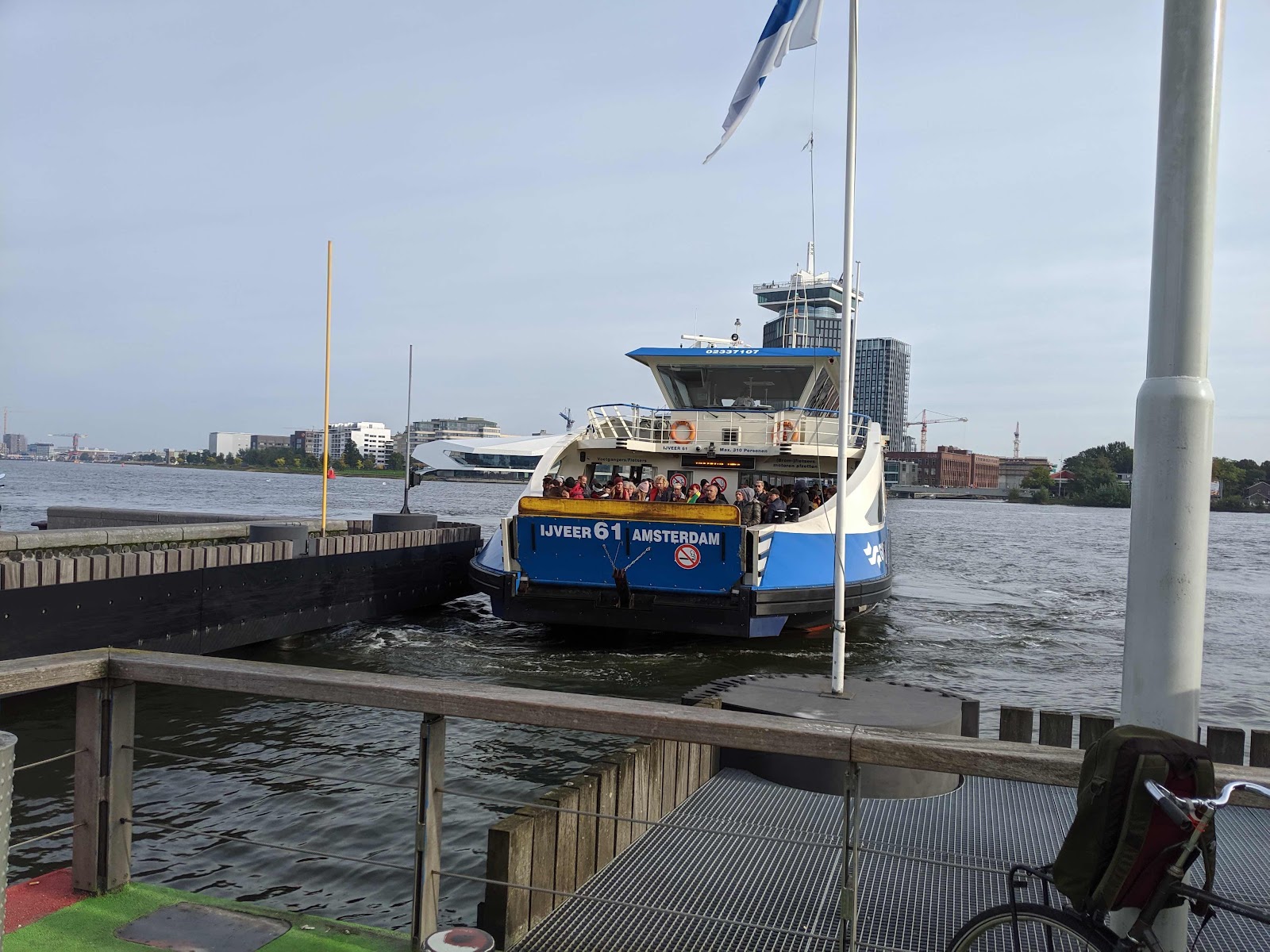 You get a pretty good view of the waterfront so it might be fun to ride the ferry just for the view.
When I got off, just about the first thing I saw was this business. They didn’t seem to have any beers on tap so I passed them by. I don’t know, maybe Sexyland will be a future addition to Disneyland. 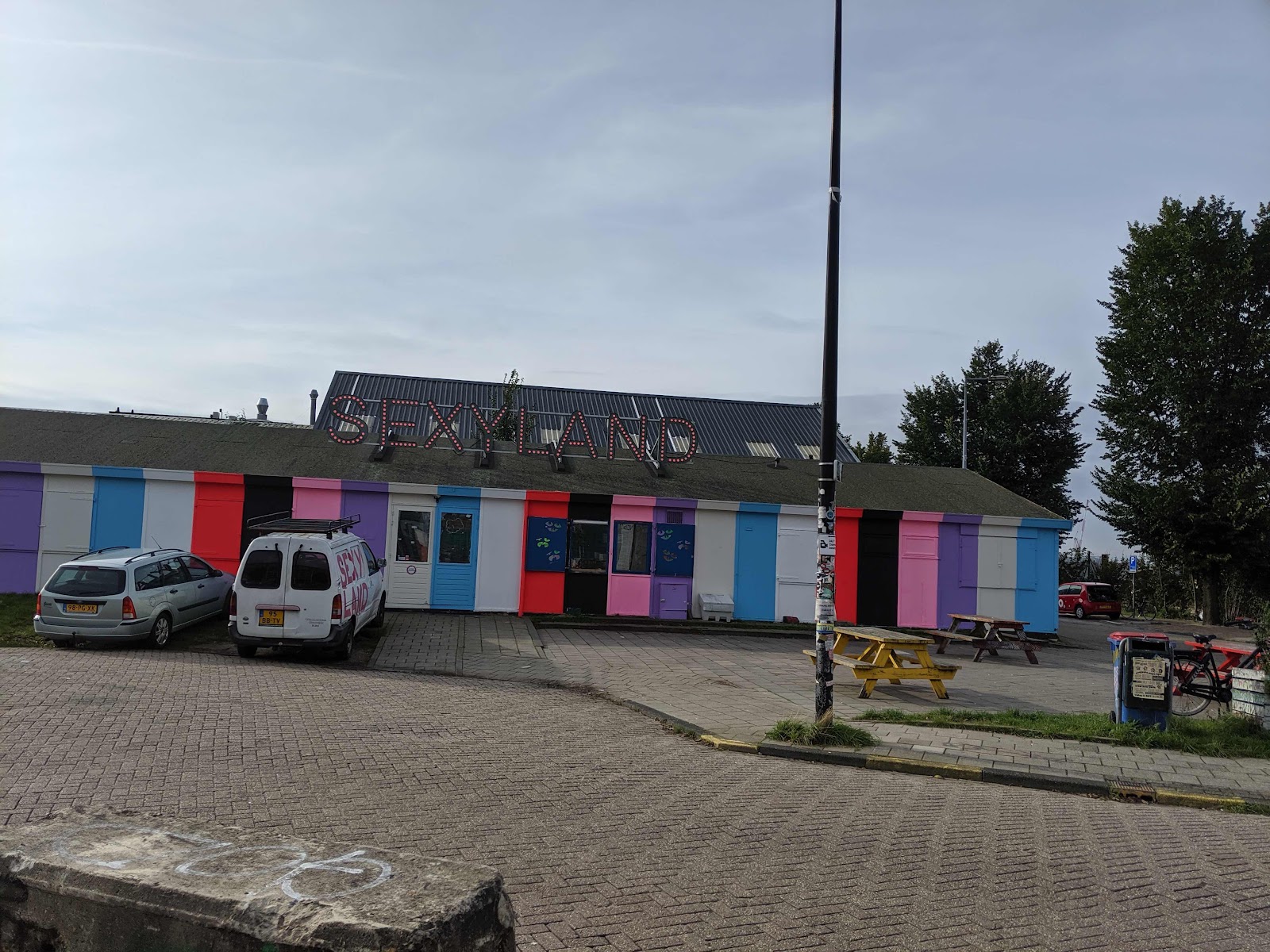 I couple of block from the ferry is the warehouse where IJVer has made its home. They have a large terrace that looks like it would be nice in the warmer months. 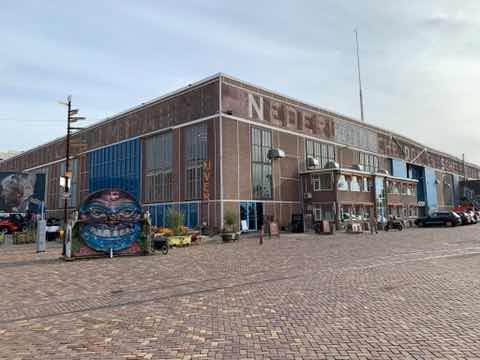 The inside is huge, at leave two levels and multiple bars and enclosed patios. In addition they have 20 beer taps, with a good representation of Dutch craft breweries. 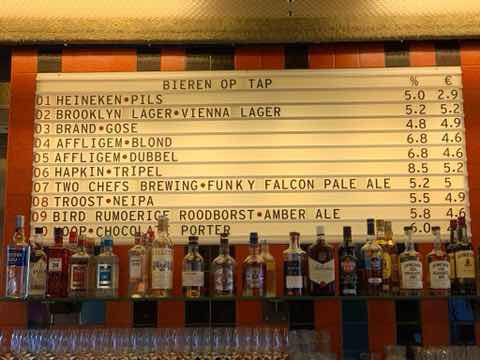 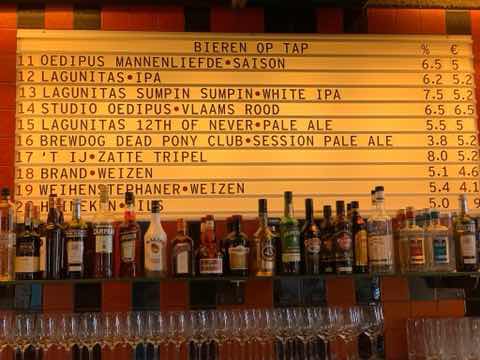 I started with the Two Chefs Funky Falcon Pale Ale. It was very nice but not all that funky. 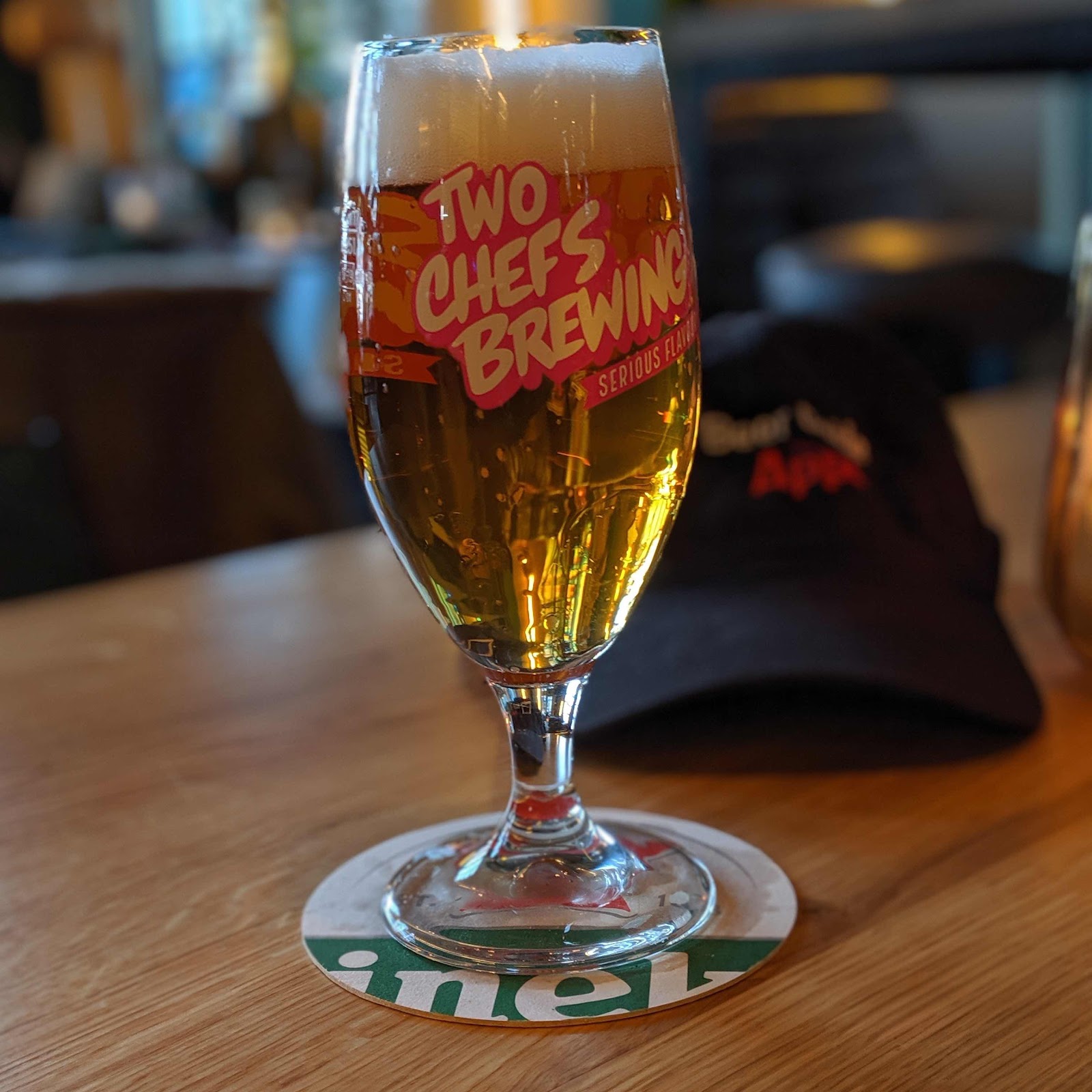 I followed that up with an Oedipus Mannenliefde Saison, a beer I remember liking when I visited the brewery last year. It didn’t disappoint. 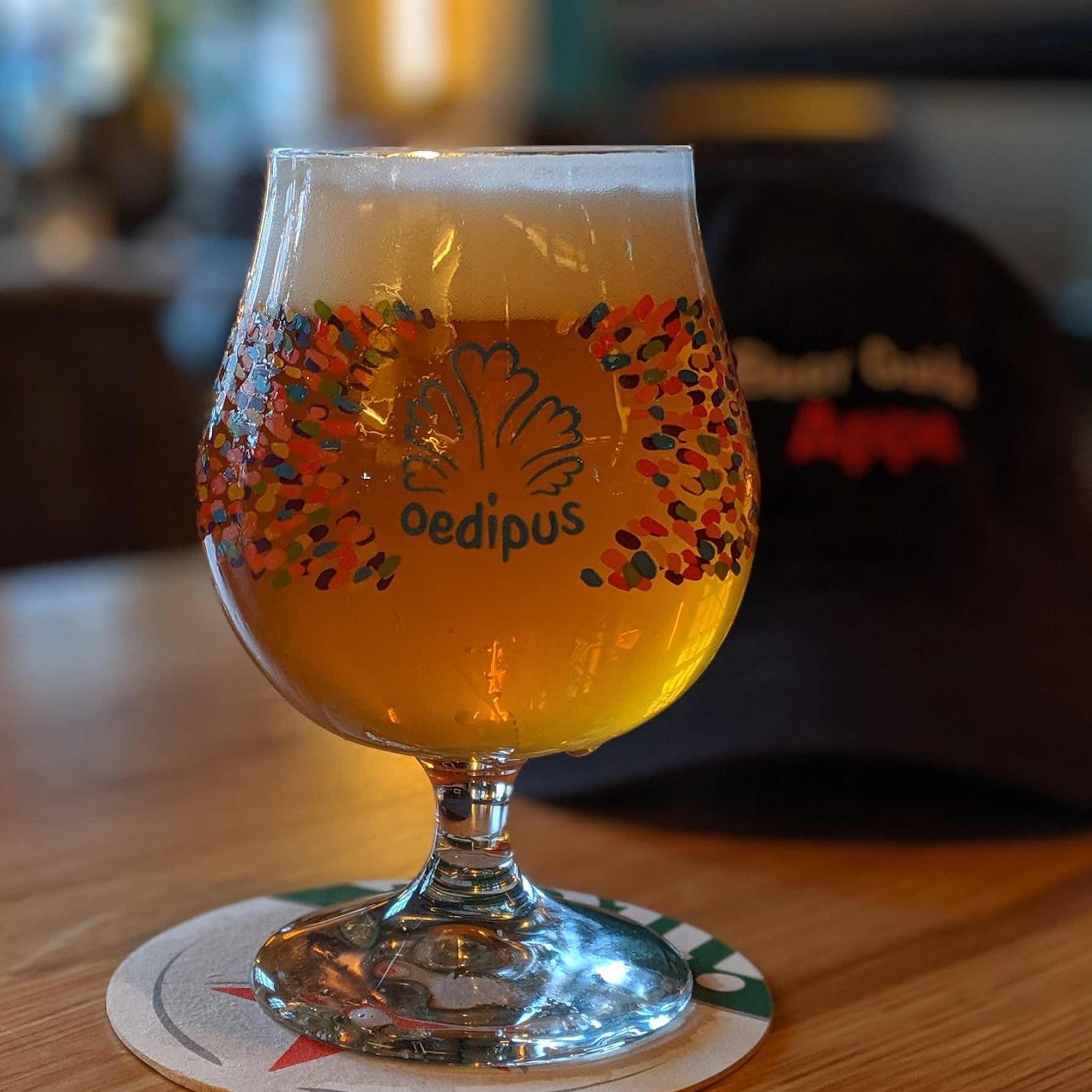 It was lunch time so I ordered a Pastrami sandwich. I didn’t read the fine print and was surprised to find it was open faced. But it worked. 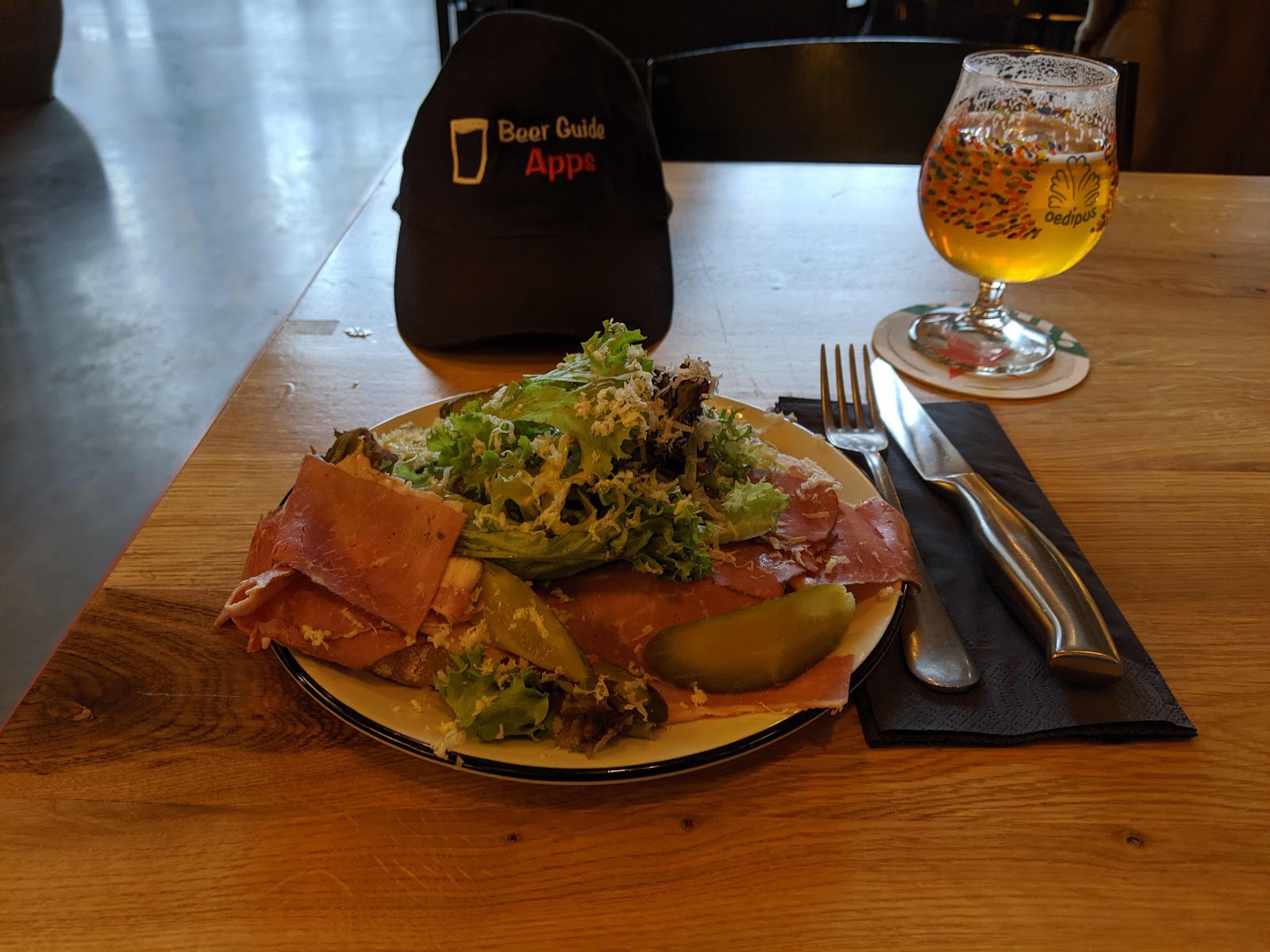 It was time to move on, so I walked back and caught the ferry and then walked up to In De Wildeman  my home away from home in Amsterdam. I was first there in 1997 and have enjoyed it each time I’ve been back. They were just finishing up “Amsterdam Beer Week” so a few taps were dry

I started with a Duits & Lauret Altbier. Very much in the Alt style, but Uerige doesn’t have to worry. I did enjoy it though. 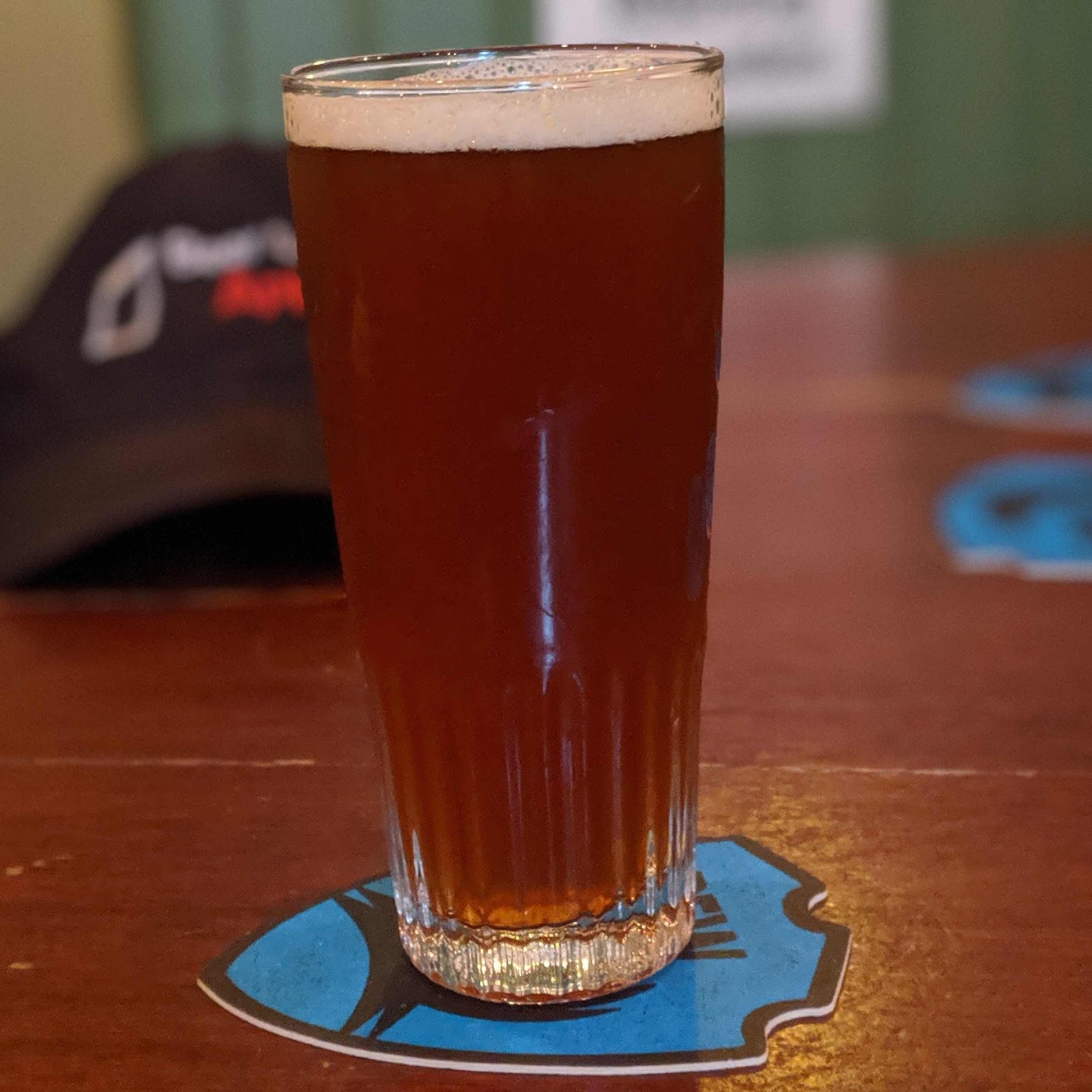 I ordered some olives to keep me company. 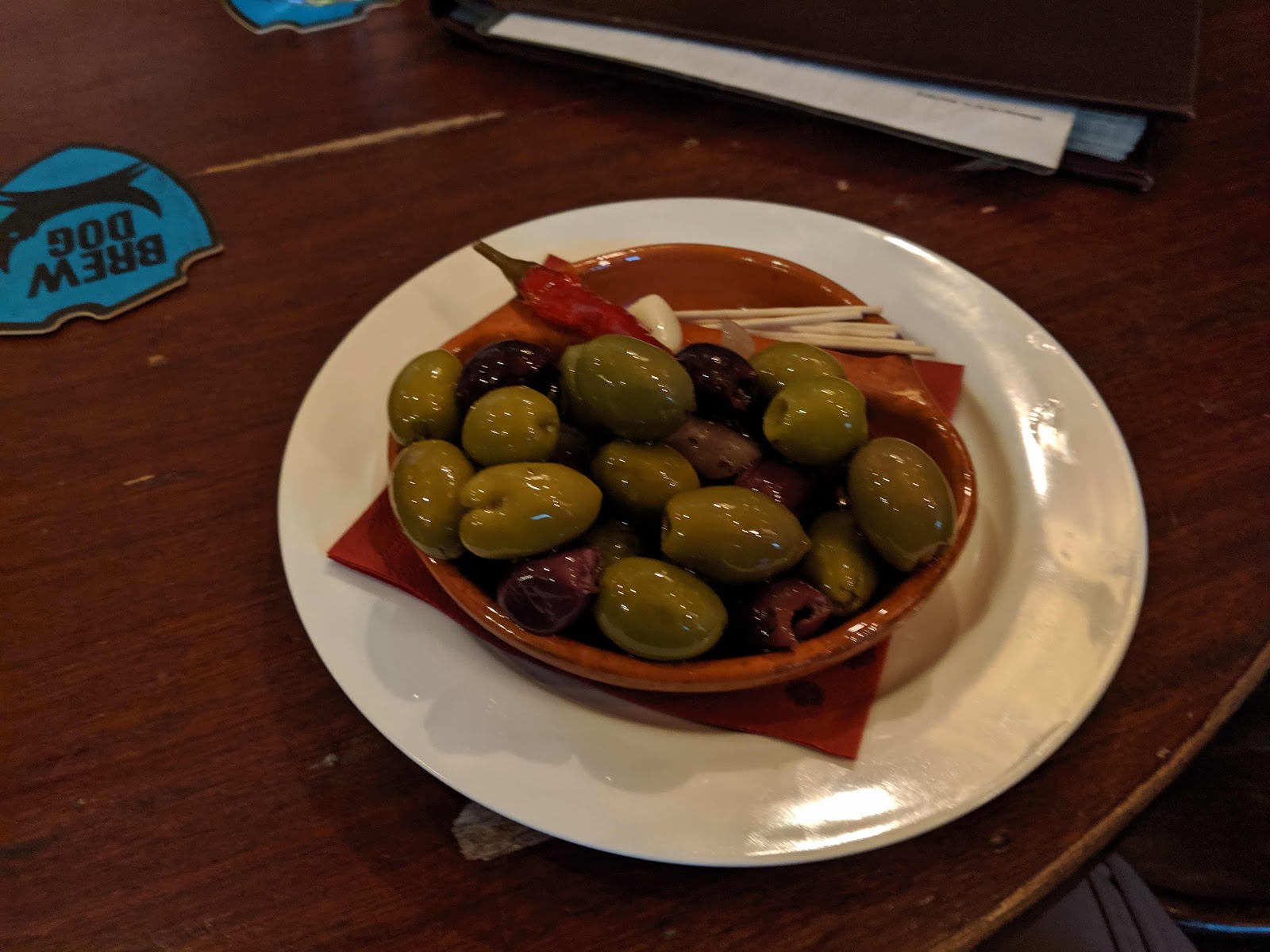 Next up was Het Uiltje Tettnang on Board the Titanic IPL. Cold, crisp and hoppy, very nicely done. 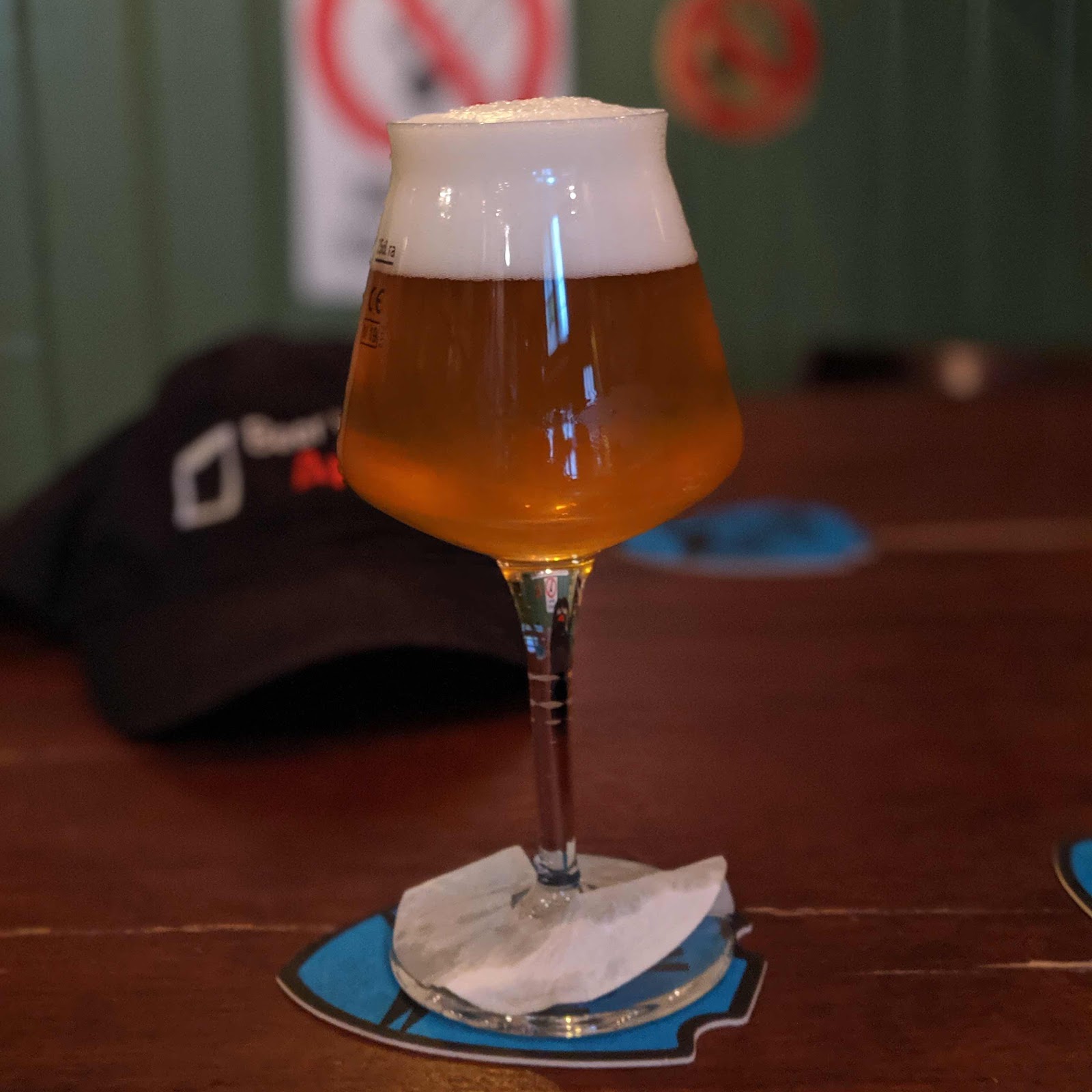 I was going to order the Kromme Haring Brett IPA but they added a new beer from a brewery I wasn’t familiar with, Friekens Brightside Hoppy Pale Ale, so I decided to try it and I wasn’t disappointed. About 4.5% abv (IIRC) but lots of flavor. I would have ordered a larger one if it was available. 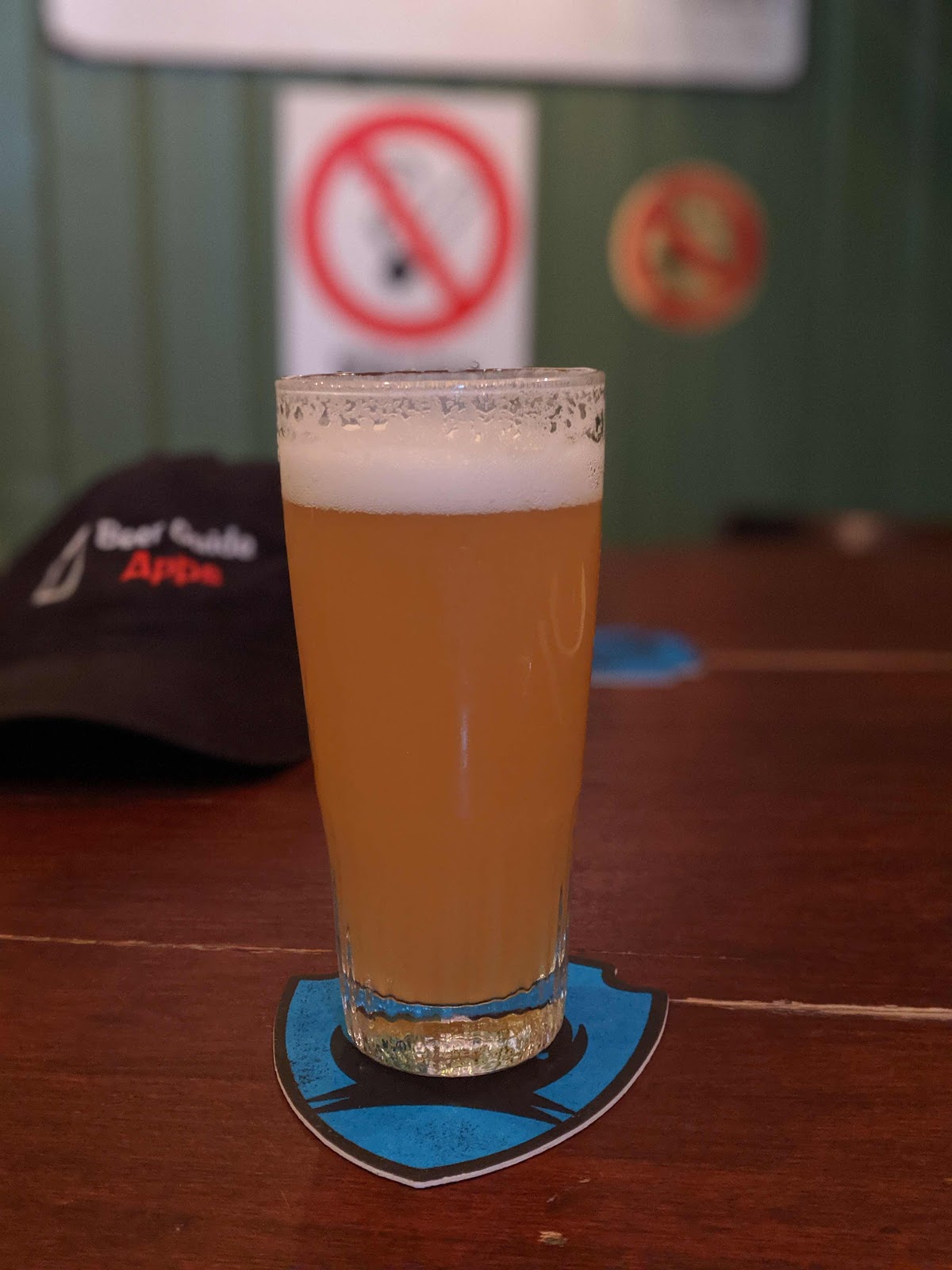 And the Wildeman doesn’t forget about the pooches with a water dish just outside the door. 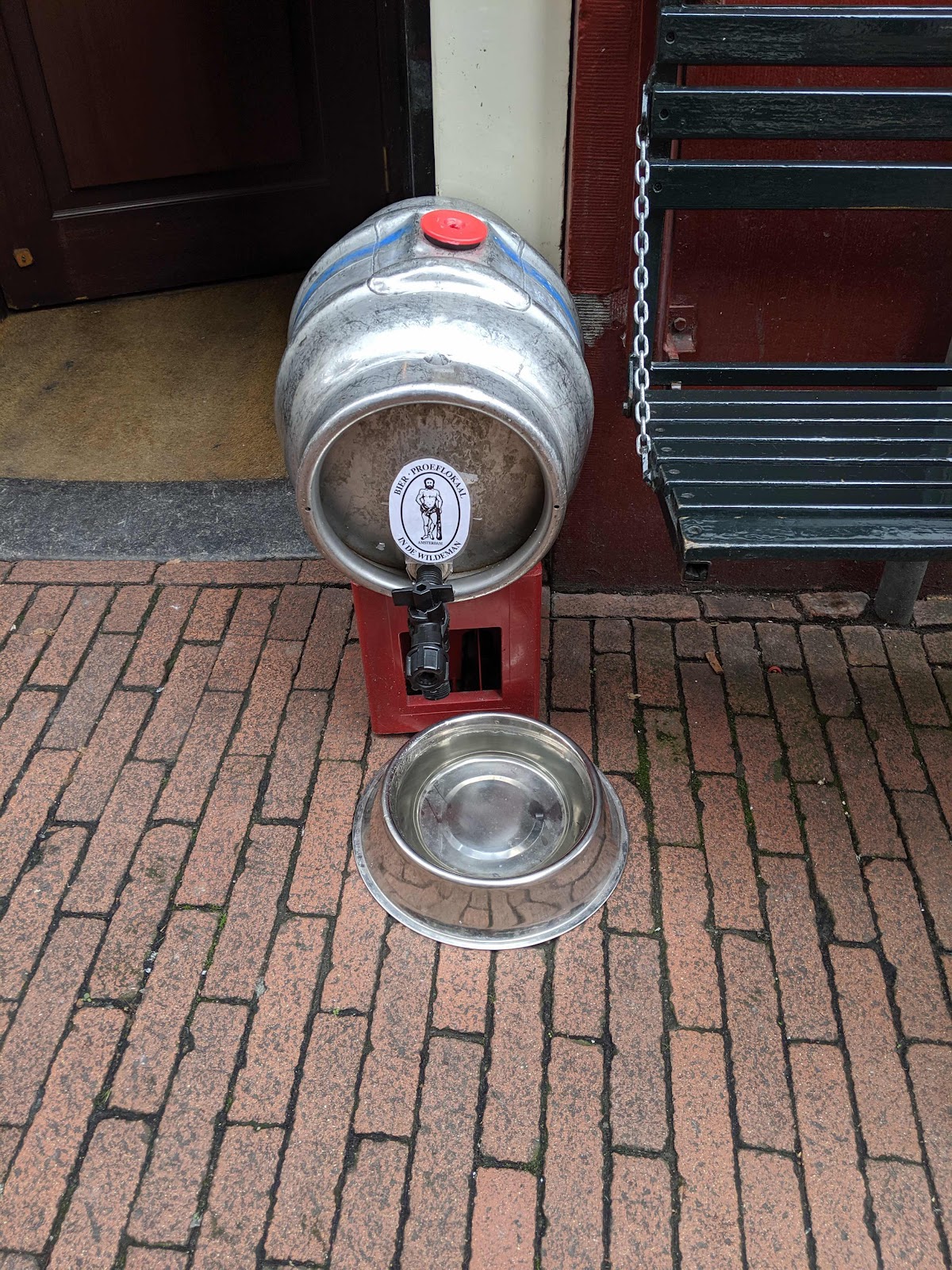 I headed next to another place I hadn’t been to but was recommended: Taproom. 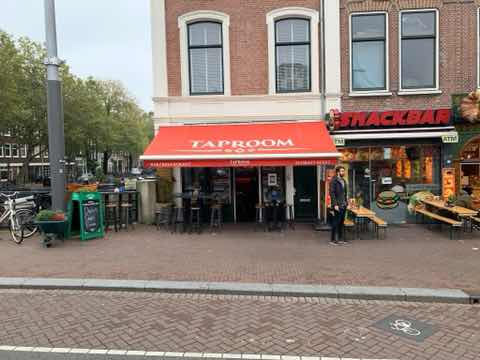 It was supposed to act as a taproom for Amsterdam Brewing Company but I guess that relationship has fallen by the wayside as there were no ABC beers on tap. There were 8 or 9 empty taps, so I guess those were previously ABC beers. But they had lots of good stuff left to choose. 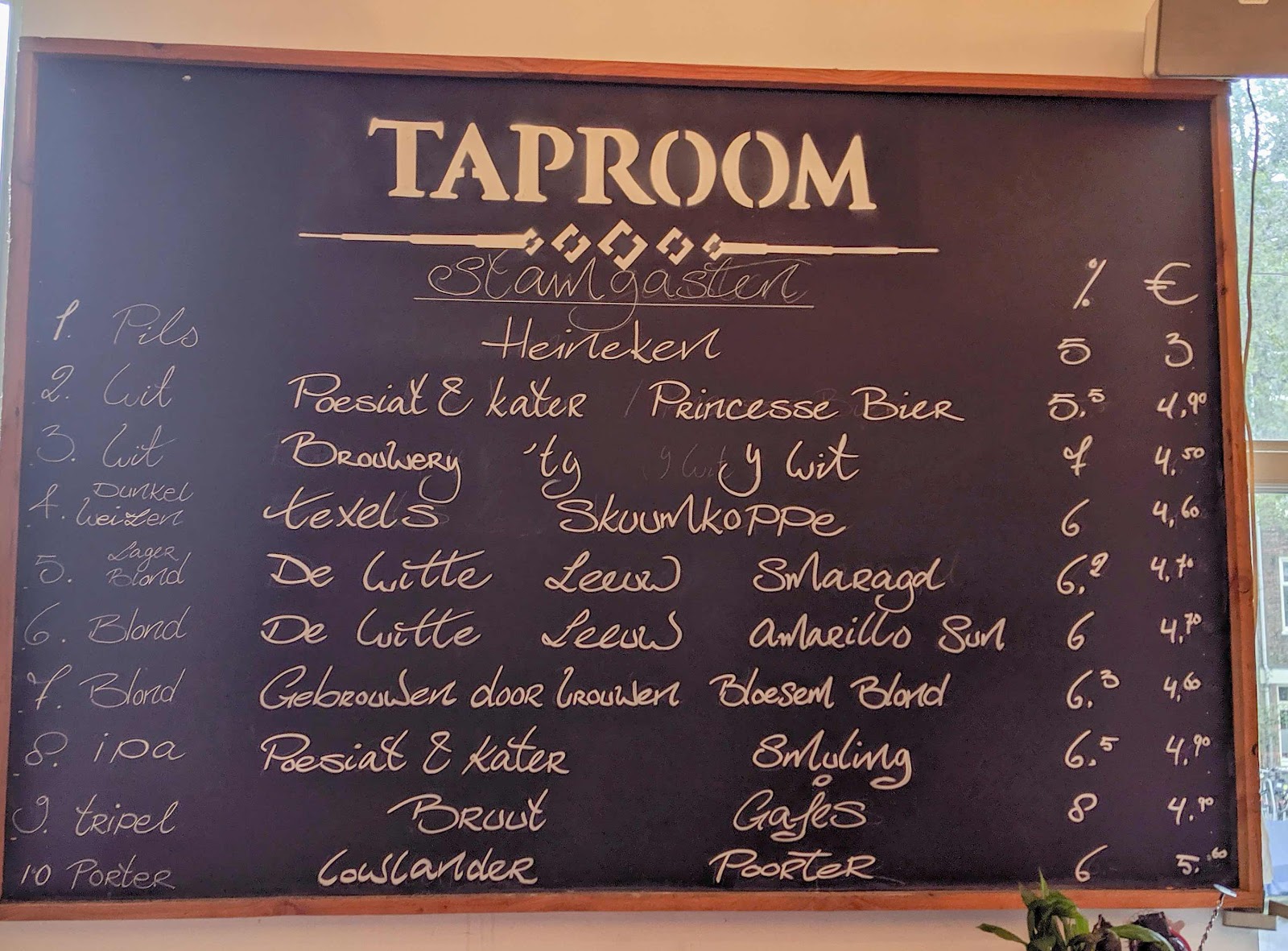 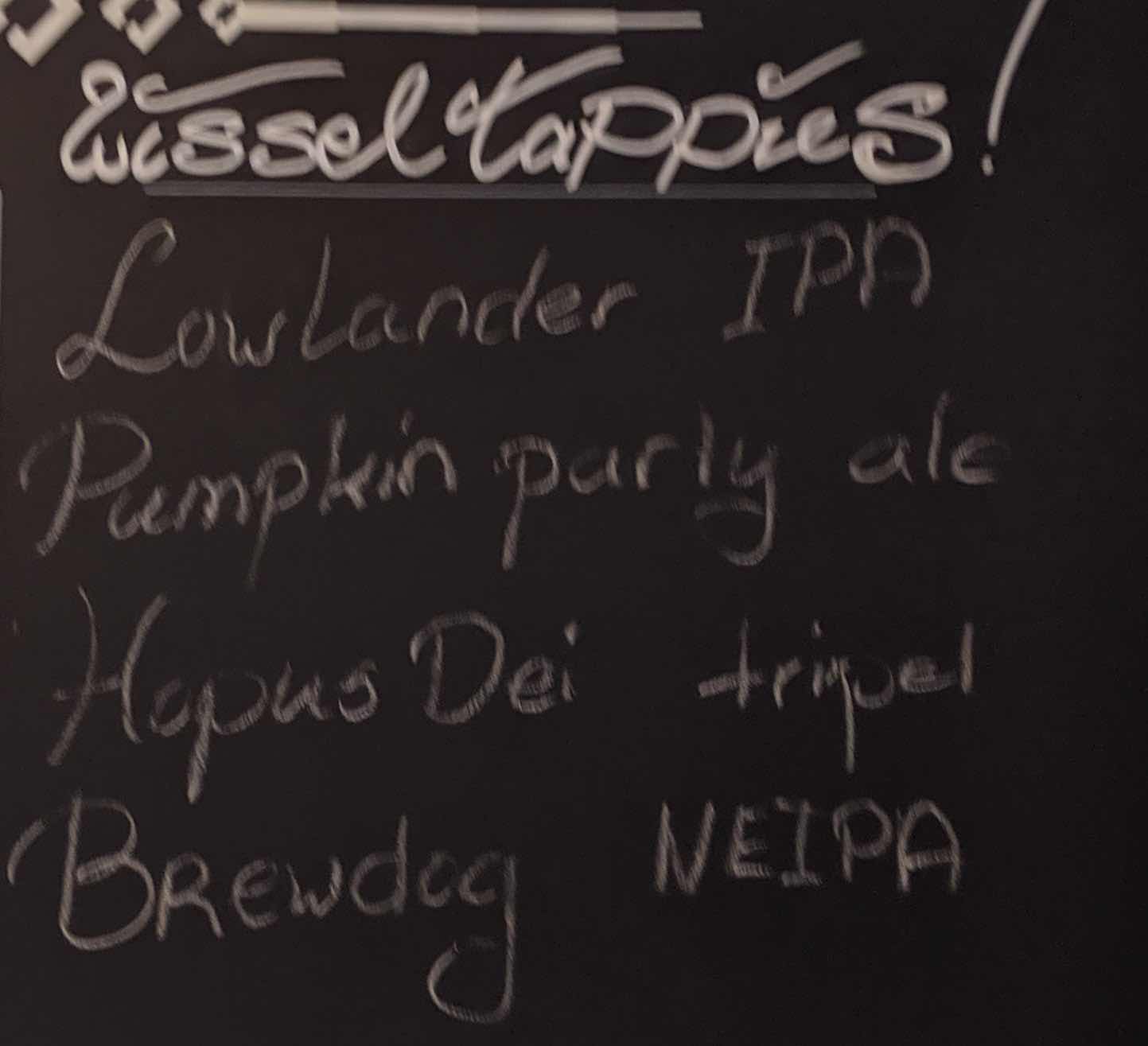 I started off with the Gebrouwen door Vrouwen Bloesem Blond. This a brewery founded by two sisters, hence the name (Brewed by Women) 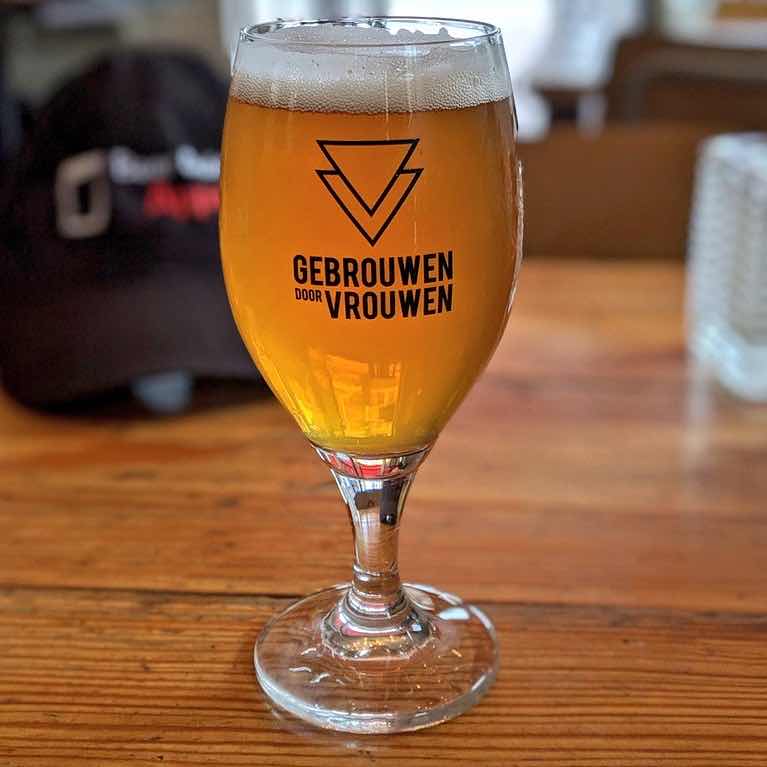 A very nice beer, as have all the ones I’ve had from them have been.
Next up was a Poesiat & Kater Princesse Bier, a Wit. 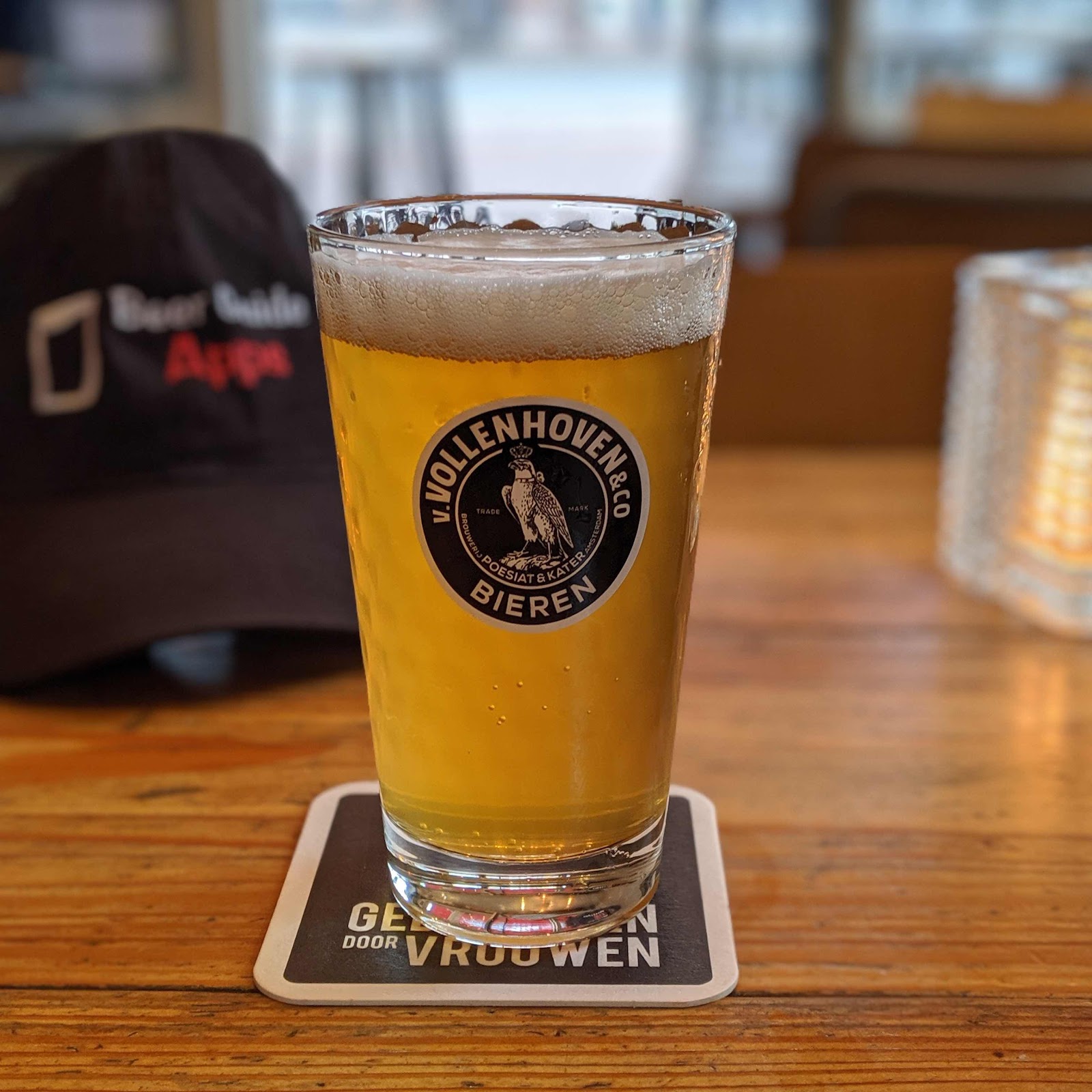 You might say, “Hey wait a minute, that is the wrong glass.” Well sort of. Van Vollenhouven is an old Amsterdam brewery that was bought by Heineken and Amstel in the 1940’s and closed in 1960. Poesiat & Kater have licensed the name and produce beers based on old recipes under the Van Vollenhouven name. It is a nice Dutch style Witbier.
Next I hopped a couple of trams heading to Oost Amsterdam and Bar Joost. 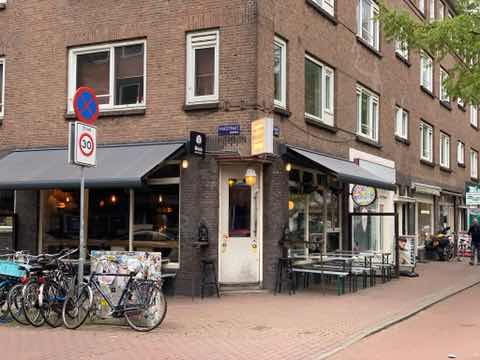 This is a tiny pub that specializes in Amsterdam brewed beers 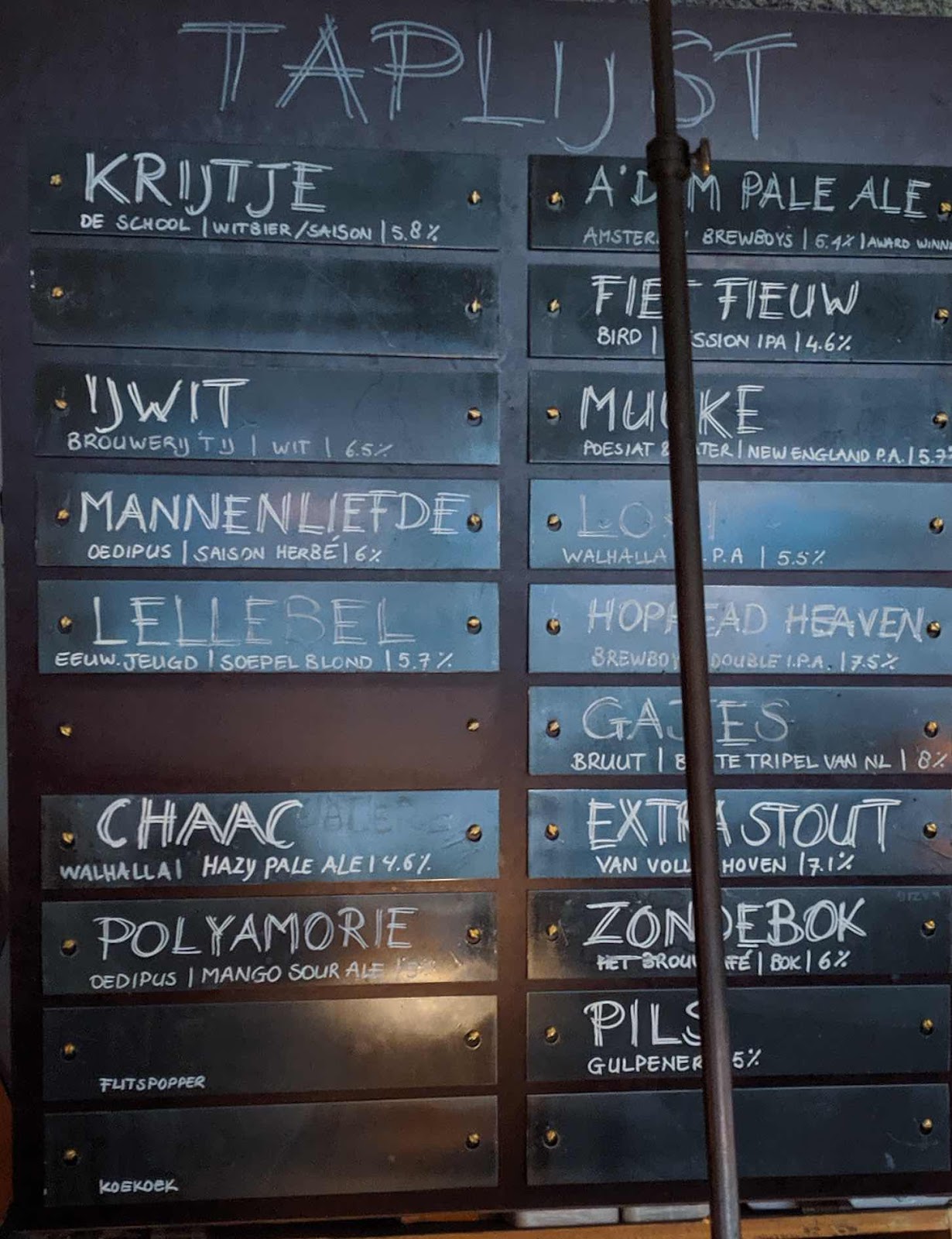 I started off with the Bird Brewery Fiet Fieuw Session IPA. Nicely hoppy and not too strong. 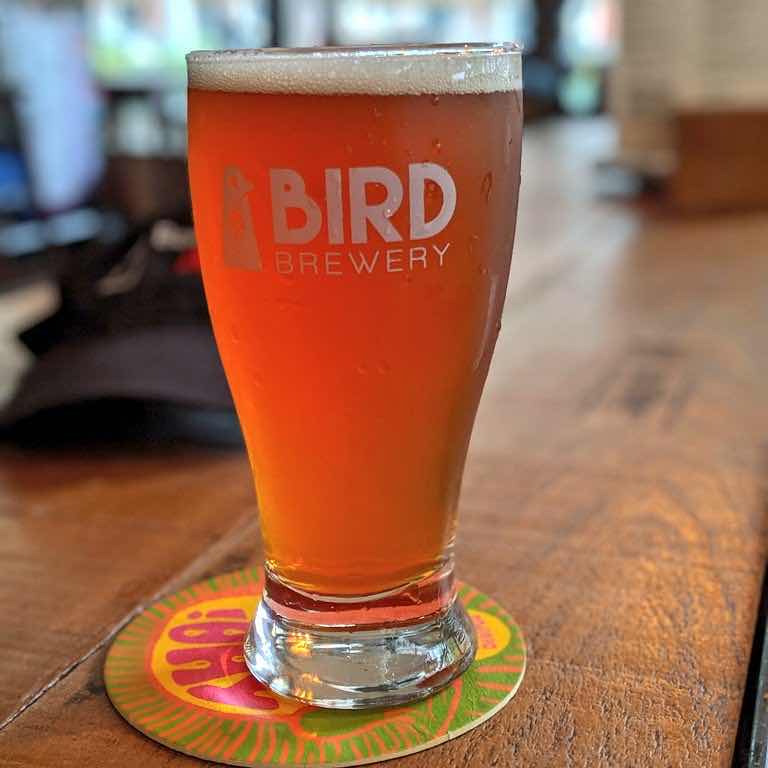 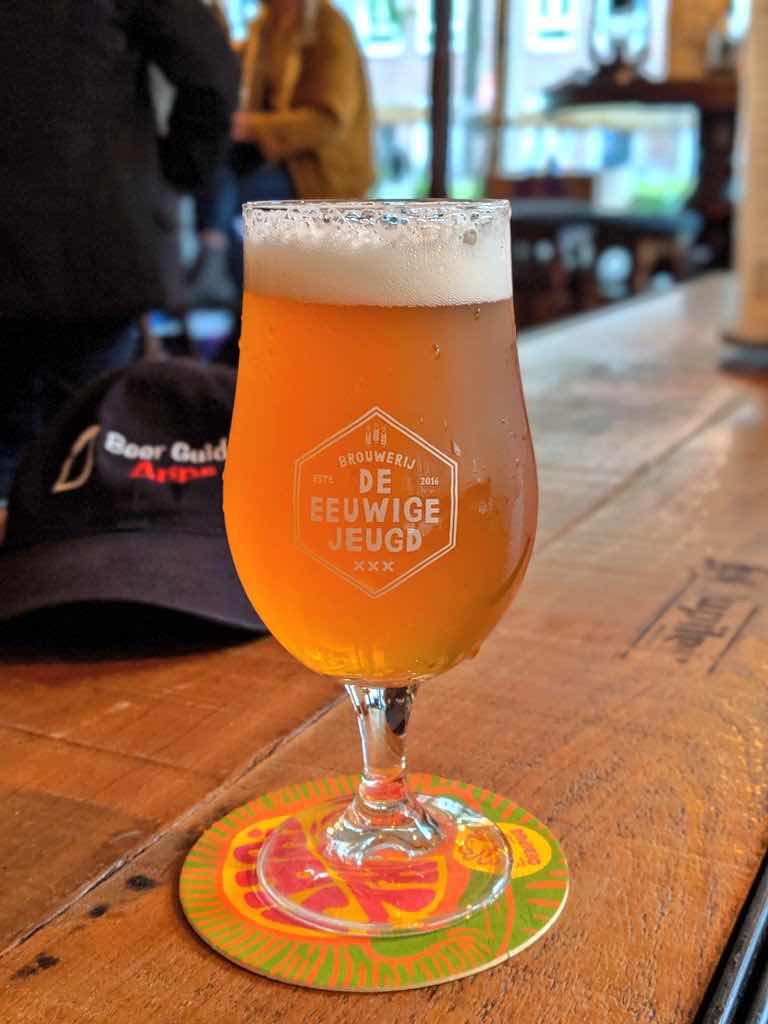 I was on a roll and tried the Bruut Gajes Triple. Voted (by somebody) as the Best Triple in the Netherlands. I assume they won a competition somewhere. I 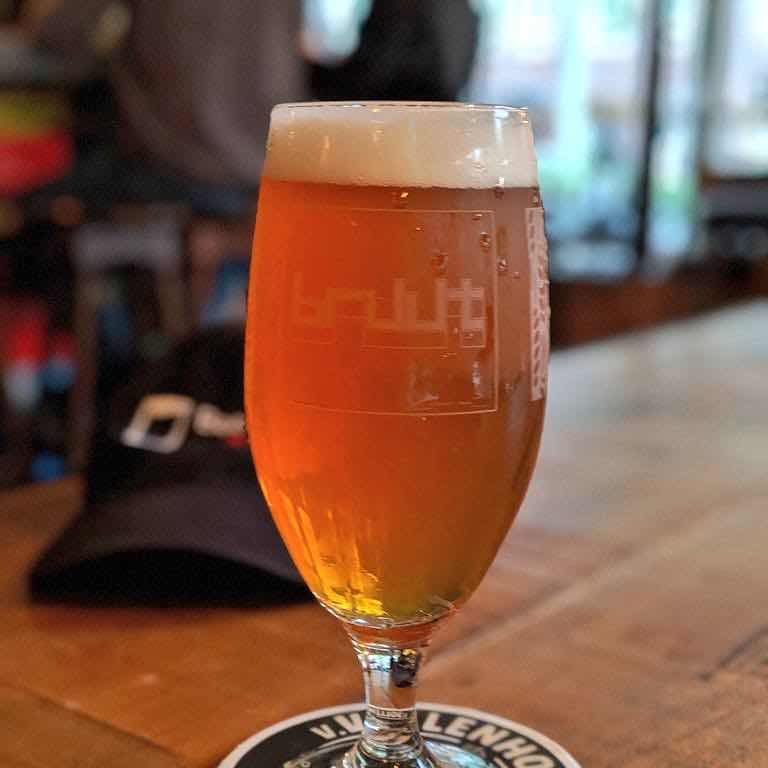 It was a nice beer but a little maltier in the finish then I like my triples. I think I am more in tune with the Belgian approach. But a very tasty beer.
I was really time to start heading back to the hotel but I was having such a fun time I decided to have a Van Vollenhouven Extra Stout. 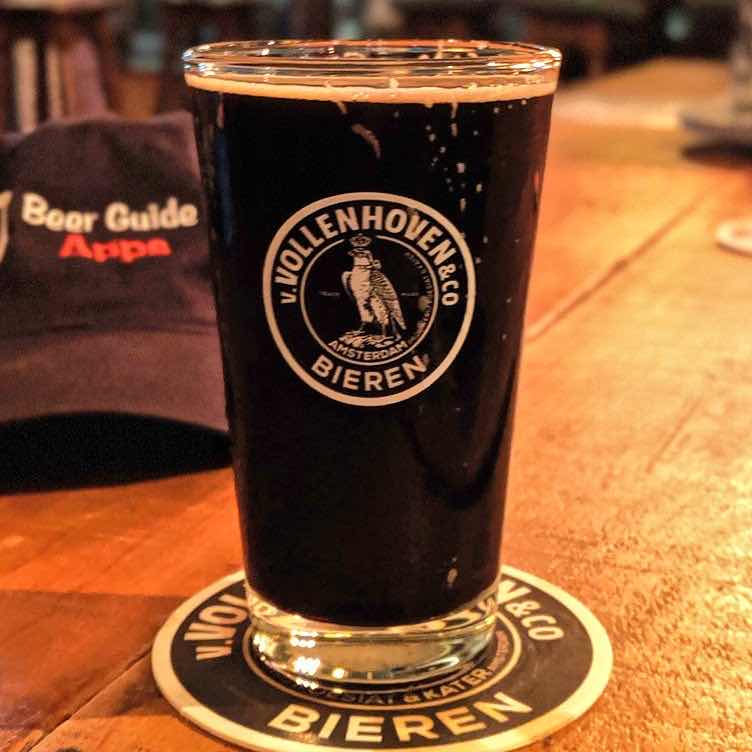 It was very nice. Roasty and full bodied. I wouldn’t say it was the best stout of the Netherlands — they brew some very nice stouts in Bodegraven — but I haven’t had a better Amsterdam brewed stout.
It is nice to get away from the city center as there aren’t that many tourists at Bar Joost. But I did end up apologizing for the activities of a countryman (no, not the Orange One). An American who said he was a brewer, was arguing that he shouldn’t have to pay for a bottled beer because he didn’t like it. He wasn’t claiming it was spoiled or off, just that it wasn’t what he expected. Oh well.
On the way back to the hotel I passed a pretty posh looking bike shop. I like their attitude. 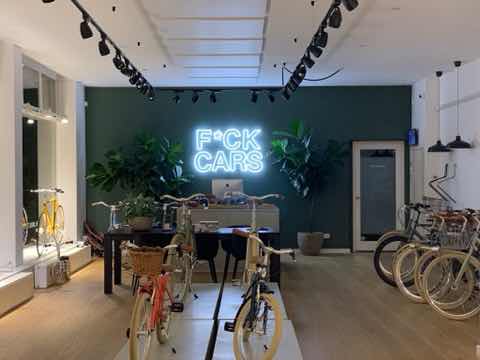