First stop, of course, was Uerige. 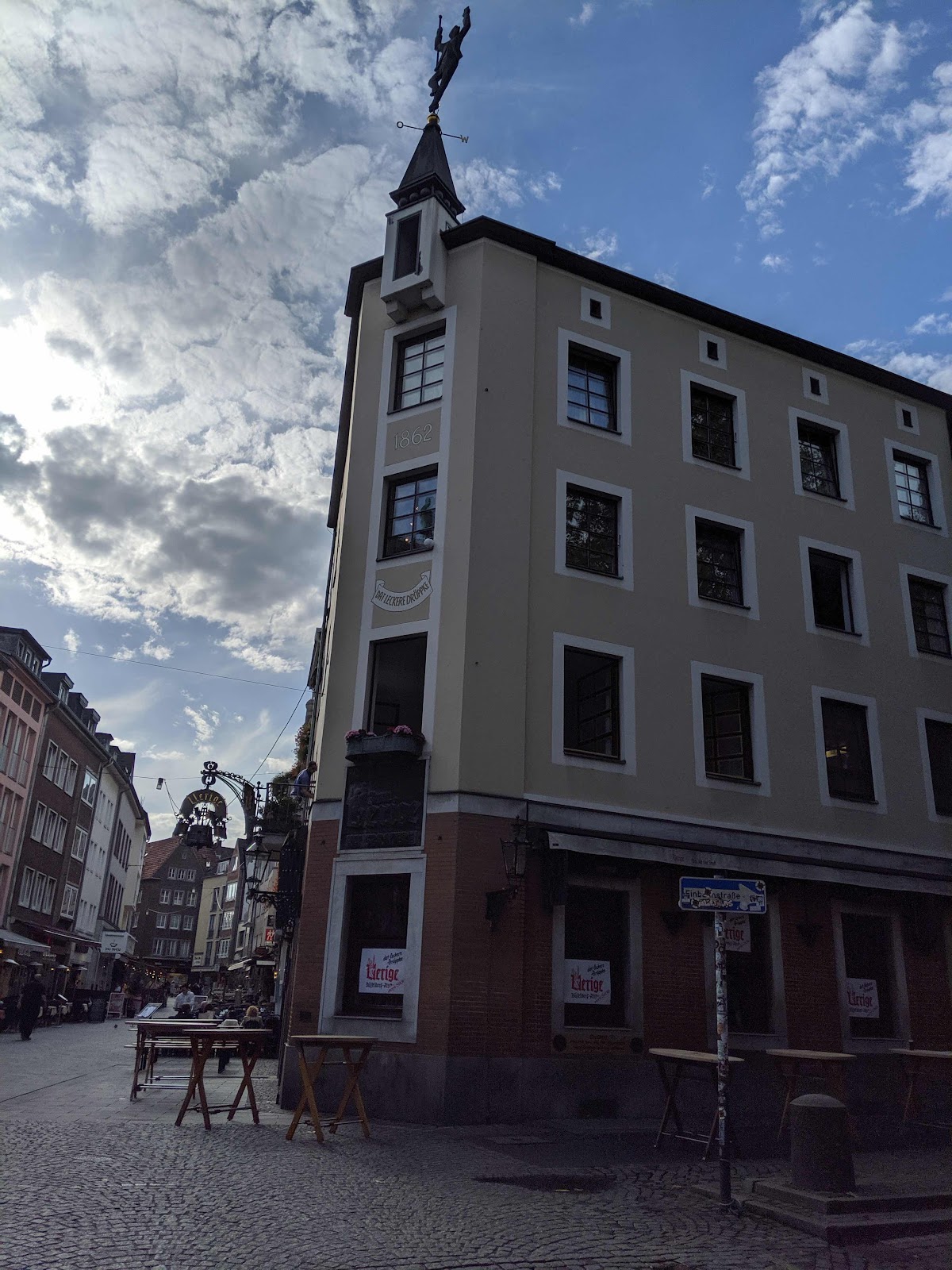 I am always happy to see this sign, as it means I didn’t schedule the wrong week. 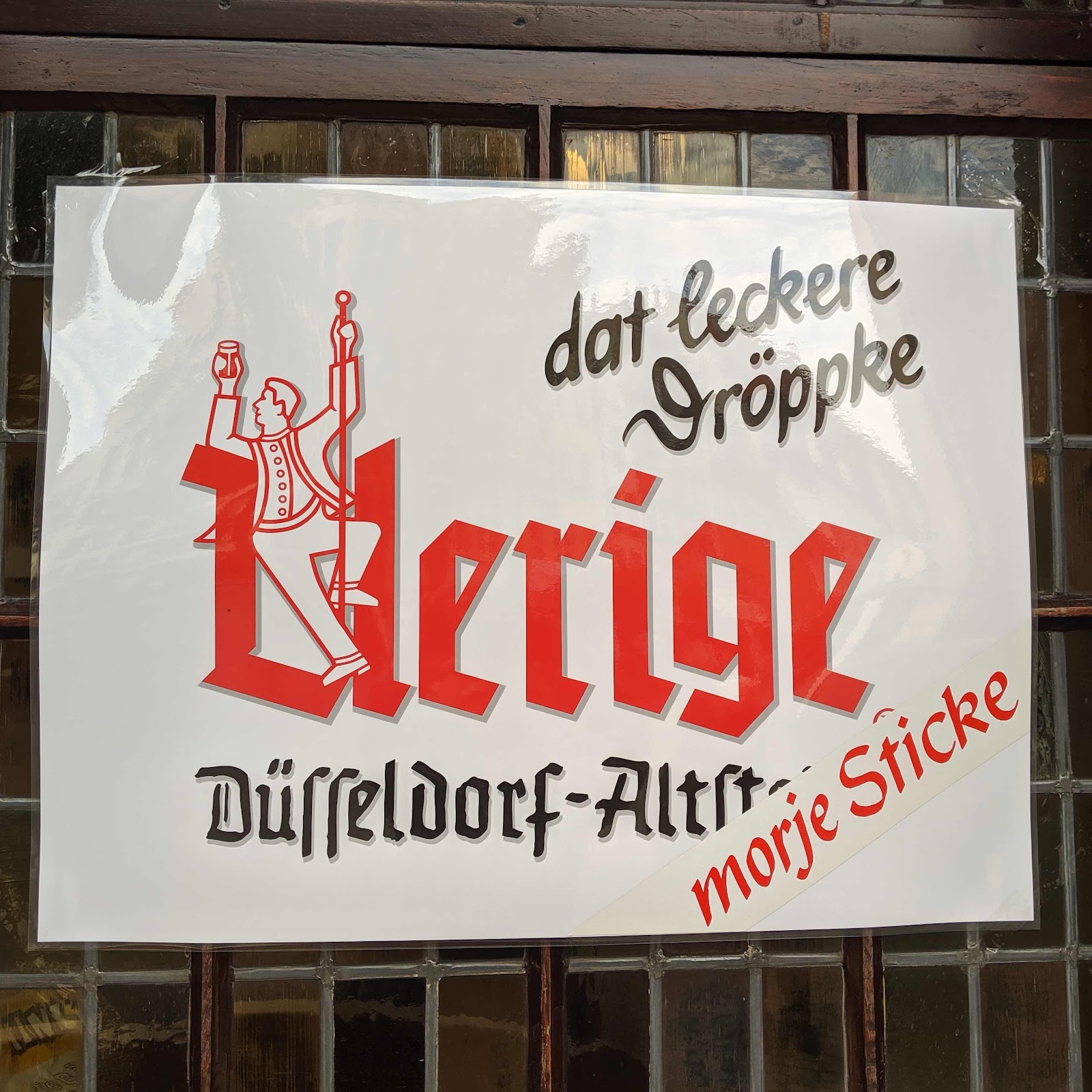 It was warm so we sat outside and drank a number of beers. I’m only showing picture of one, because they pretty much all look the same... 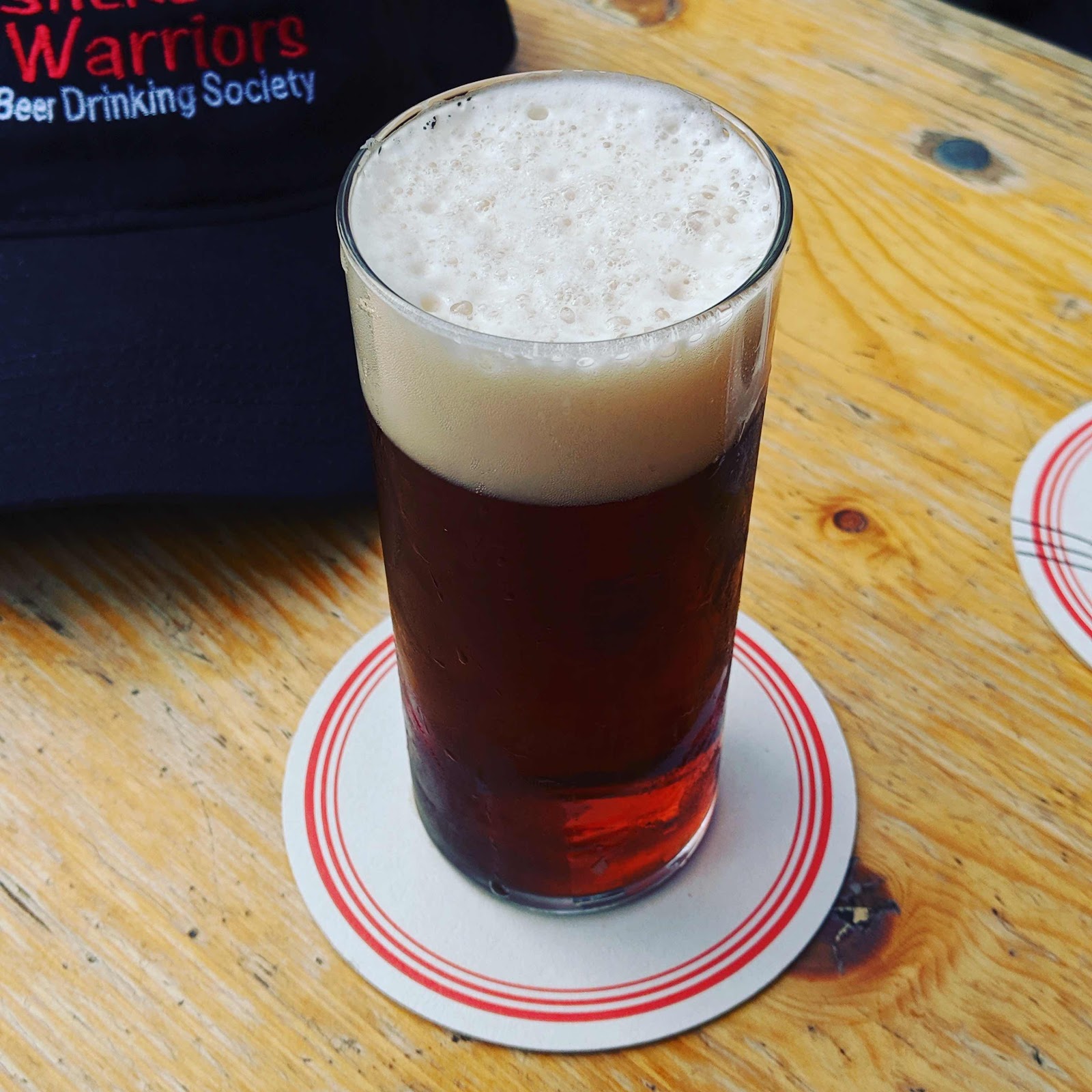 It was time for a bit of food so we walked over to Bolkerstraße and bought a Schweinebrötchen at Schweine Janes. Yummy! 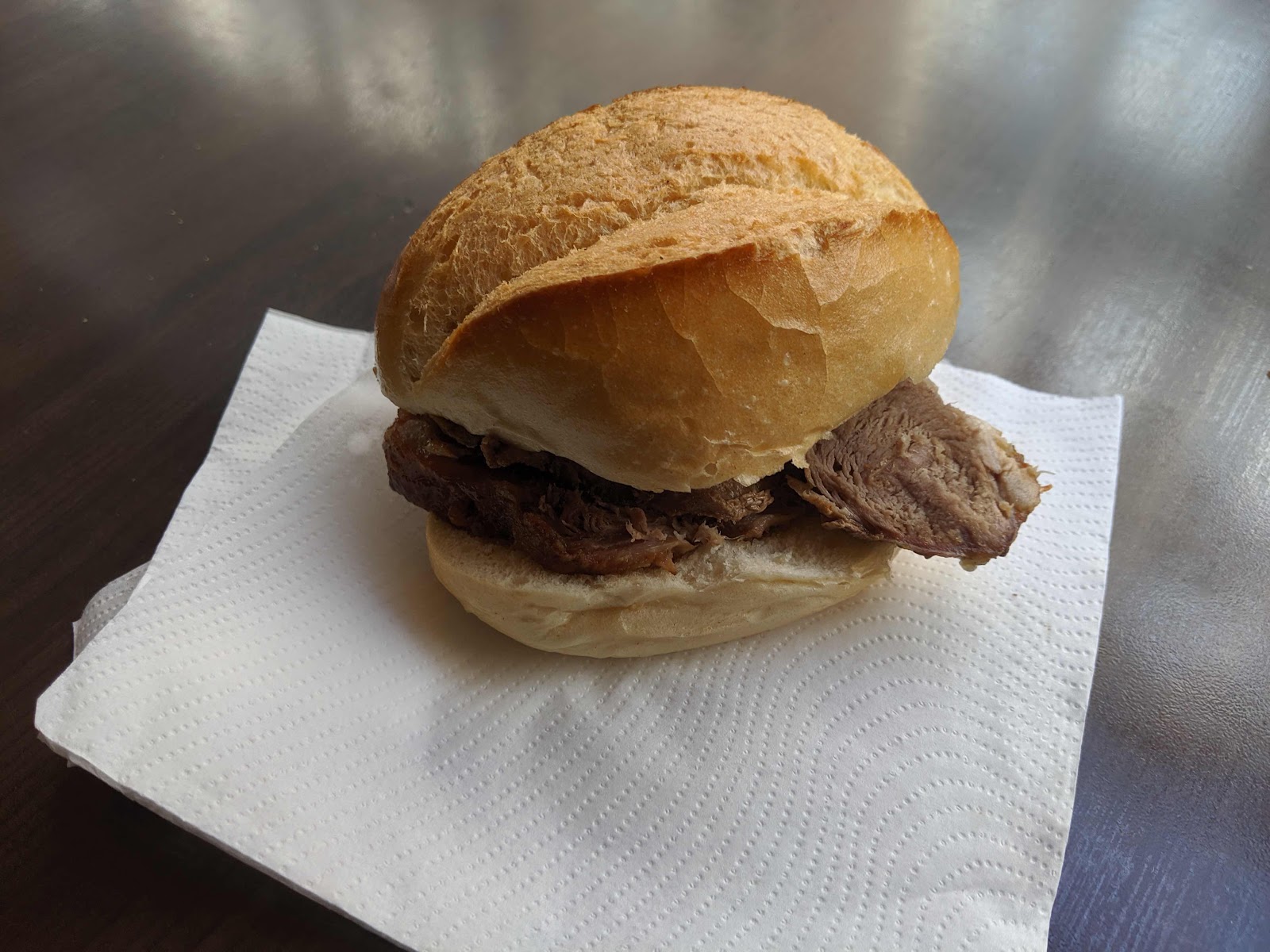 The it was up Bolkerstraße to Zum Schlüssel. They had tables set up outside so we took advantage. 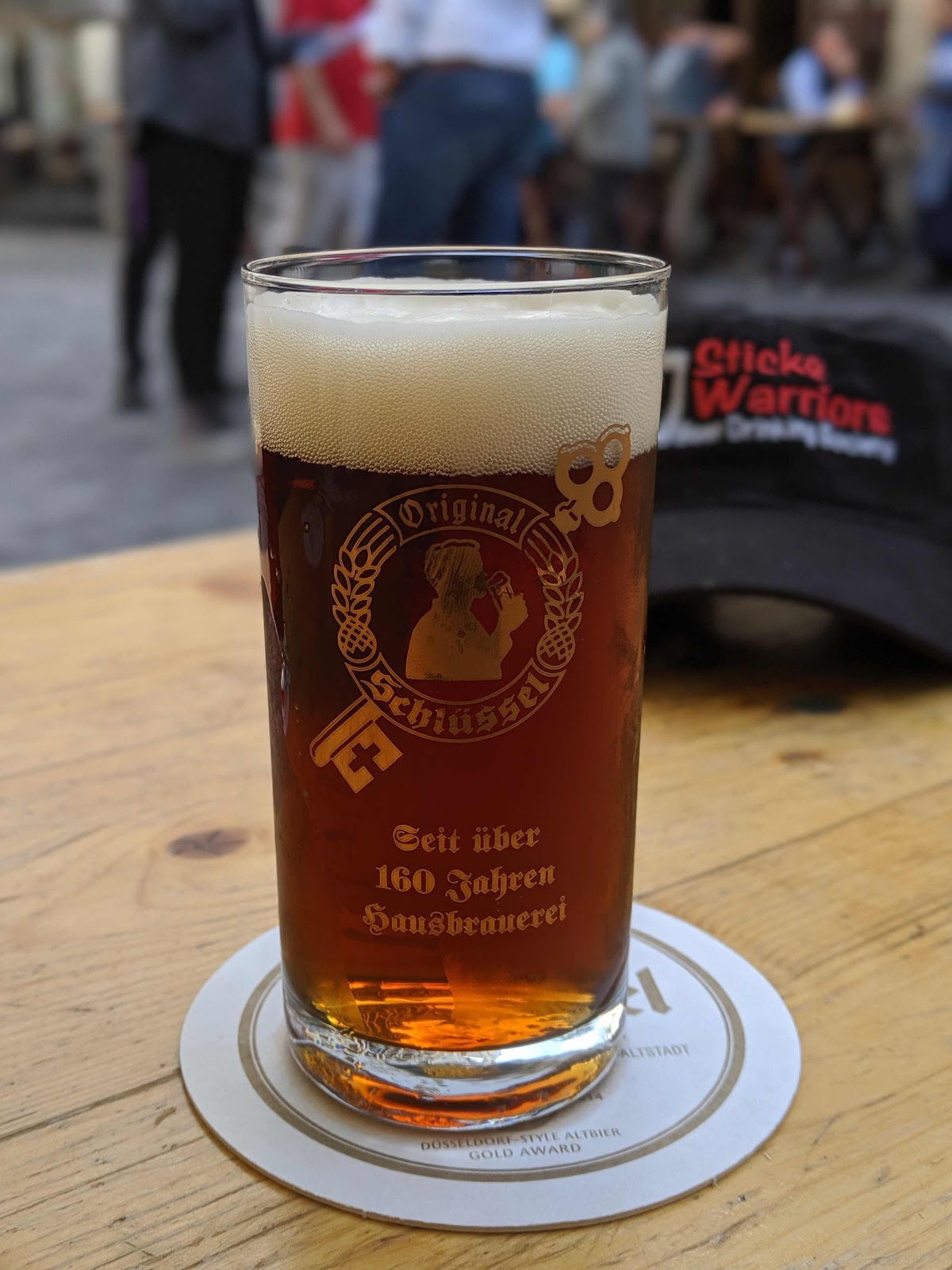 Schlüssel is my least favorite of the original four breweries. I find it a bit on the sweet side, though there are those for whom it’s their favorite. It is a well made beer so it is just a matter of personal choice.
Practically across the street is Im Goldenen Kessel, the Altstadt tap room for Schumacher (the brewery is on Oststrasse) 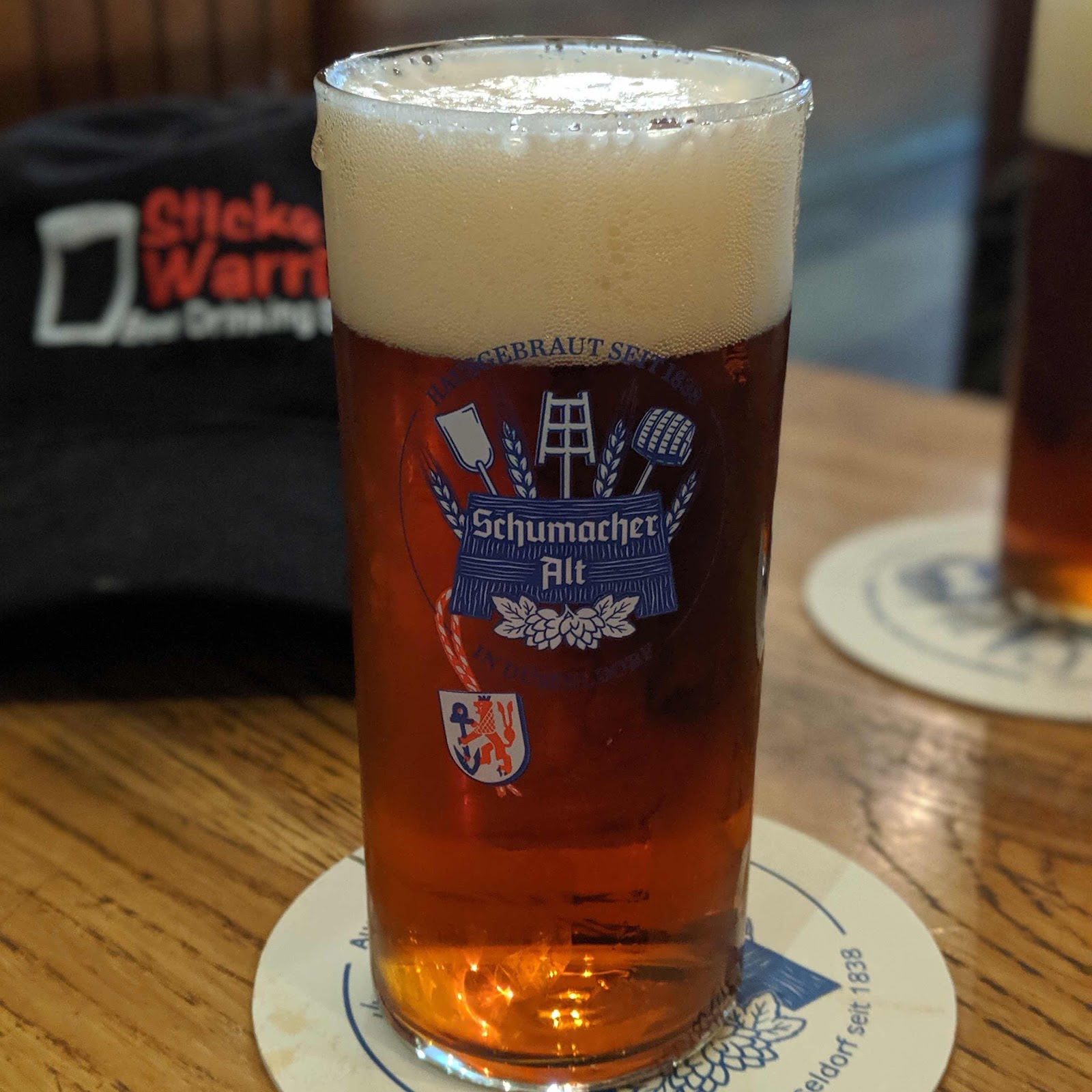 This was a little less malty than I remembered, though it was good. When the others ordered a second, I ordered their “Premium” beer the 1838er. This is served from a keg tap, not a gravity barrel. 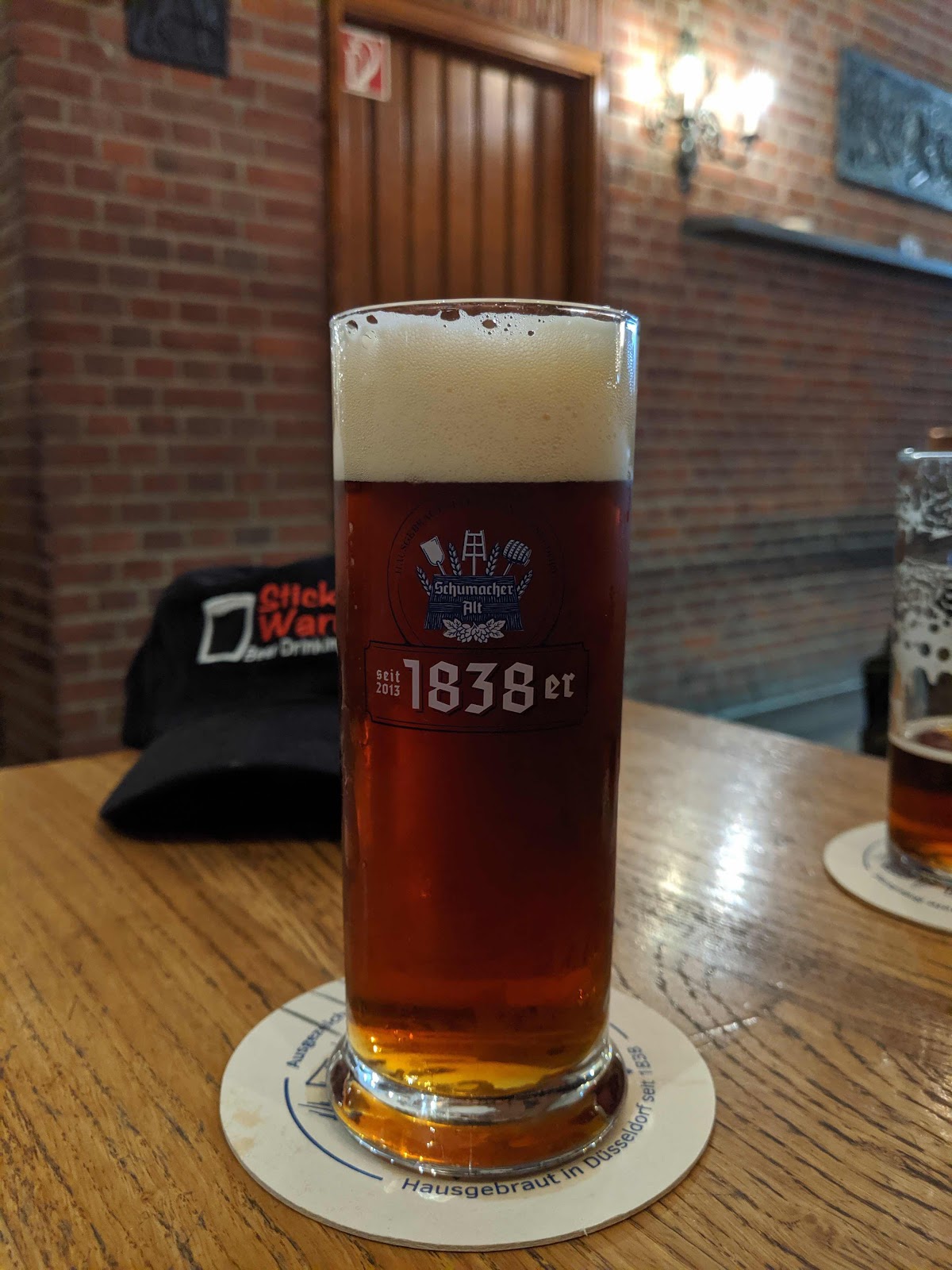 The glass is pretty but the beer was horrible. Tom said he could smell the diacetyl from across the table. It was also very sour. I think I fell victim to “First Beer Out of the Tap” syndrome. At least I hoped that was the case. After a short discussion they brought me a replacement. This one was much better but I didn’t enjoy it as much as I probably should because the awful taste of the first one lingered.
Next it was over to Kürze, the newest member of the family. I have found there beers to be very inconsistent: Sometimes very good, a few times totally awful but usually just sort of Meh.  This one was very good. I hope that is a sign for the future. BTW, the picture is not distorted, they serve in a short 20cl glass. 20cl? If I wanted that size, I’d go to Köln. 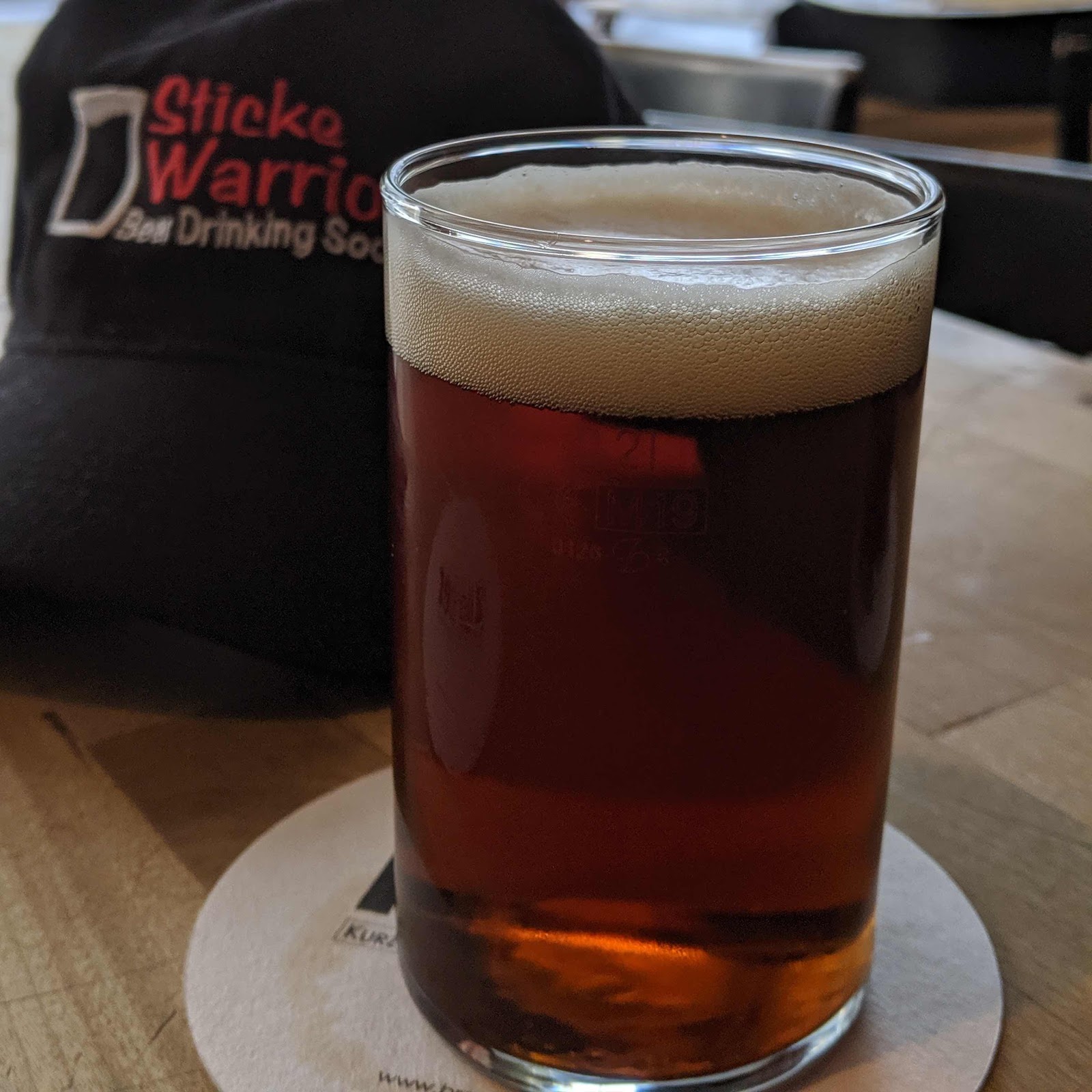 Finally over to Radingerstrasse to Im Füchschen. The beer was in good form today — not as good as it was a few years ago before the had problems in the brewhouse, but better than the past couple of years. 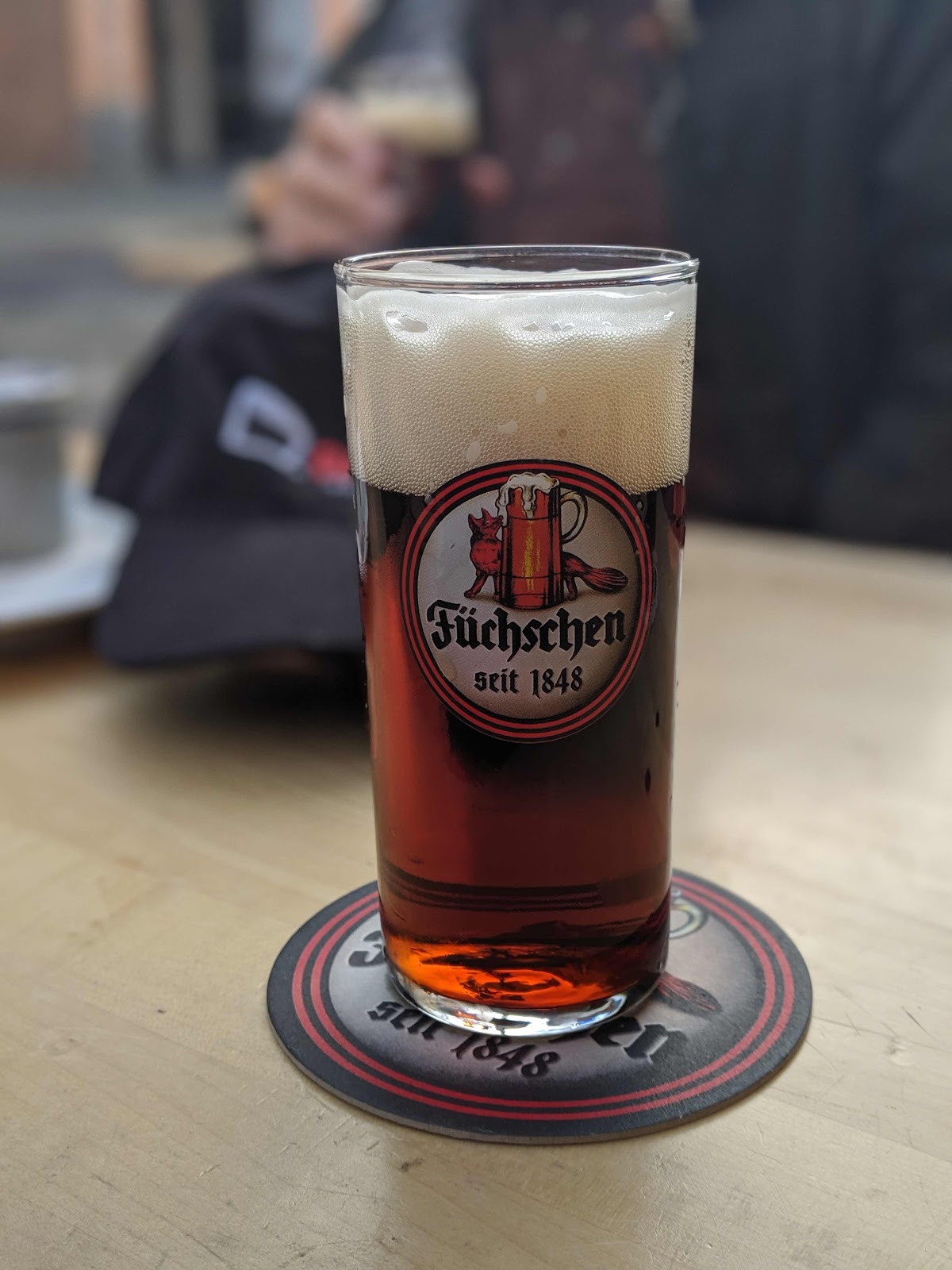 The soup of the day was Kartoffelsuppe so we had to try it. It was good, with nice chunk of sausage. 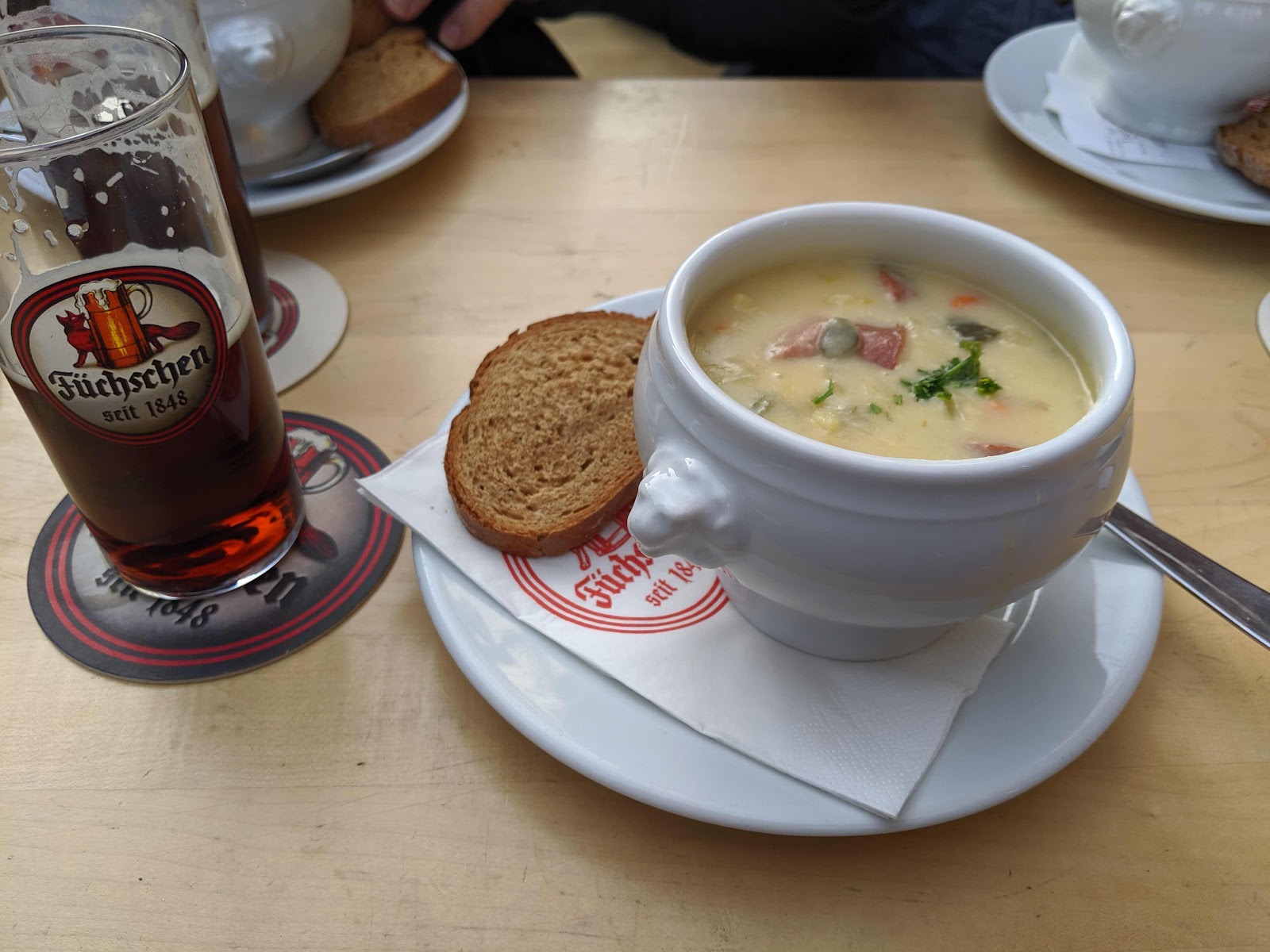 Füchschen now brews a Pils and I thought I’d try it. 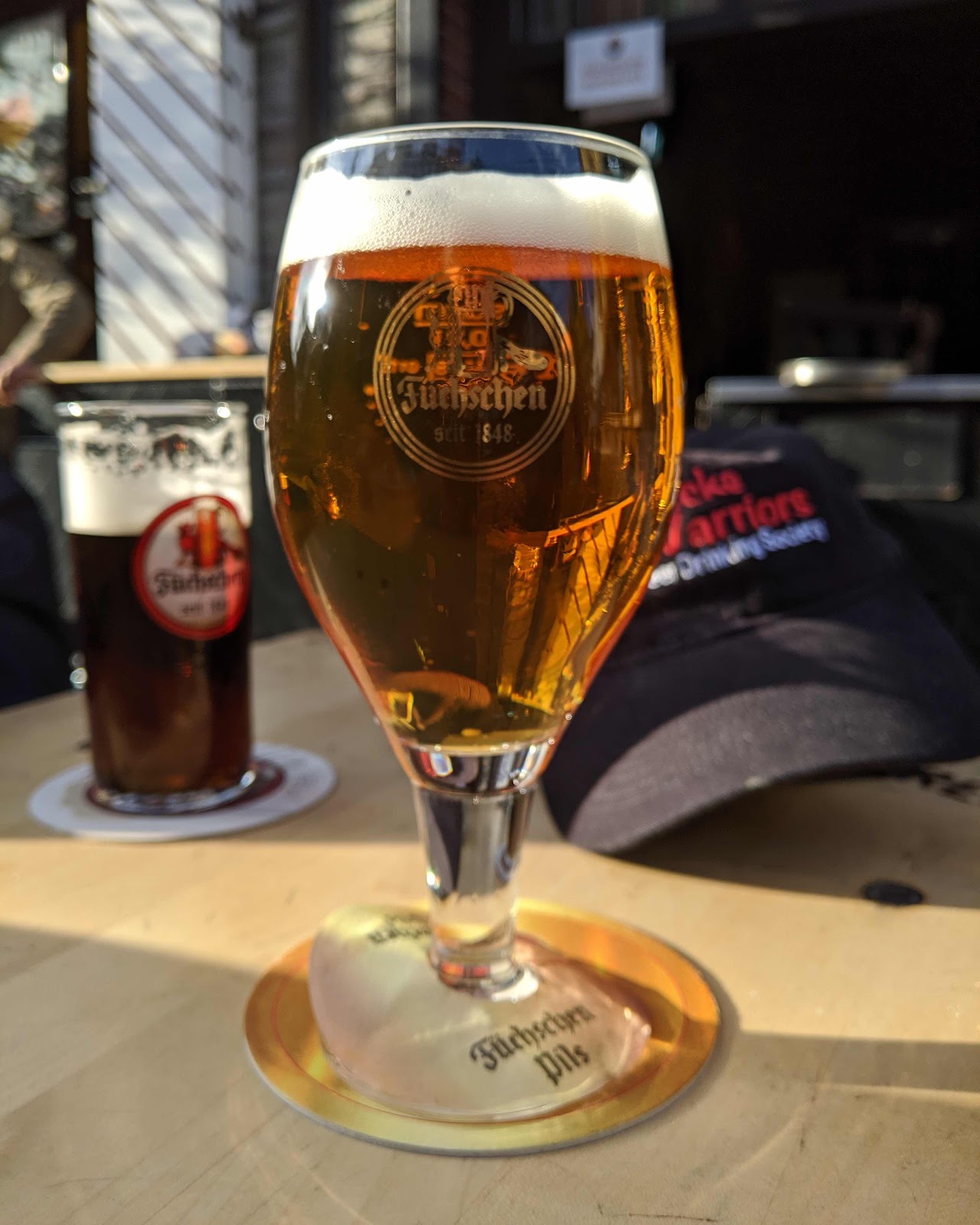 It was a bit darker than I’d expect a Pils and it had some Crystal/Caramel malt I think (a bit of a raisin note). It was an OK beer but stick to the Alt, it is much better.
We were heading back towards the Marktplatz and our traditional “Stand in Front of the Webcam” when we passed Holy Craft and realized they were open. They were just coming off a Flügge tap takeover so a lot of Flügge beers on tap. 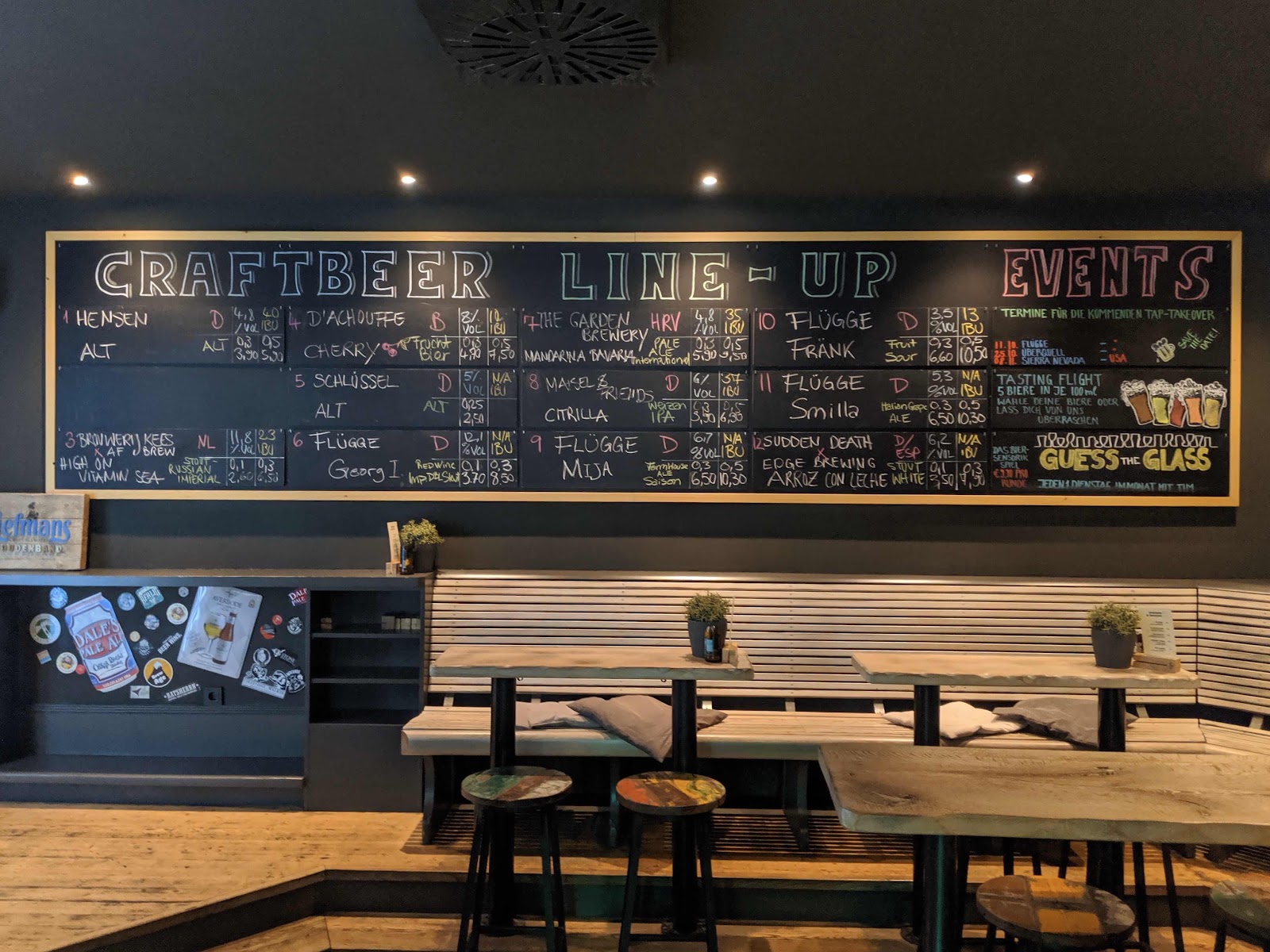 I went with the Mija Saison. 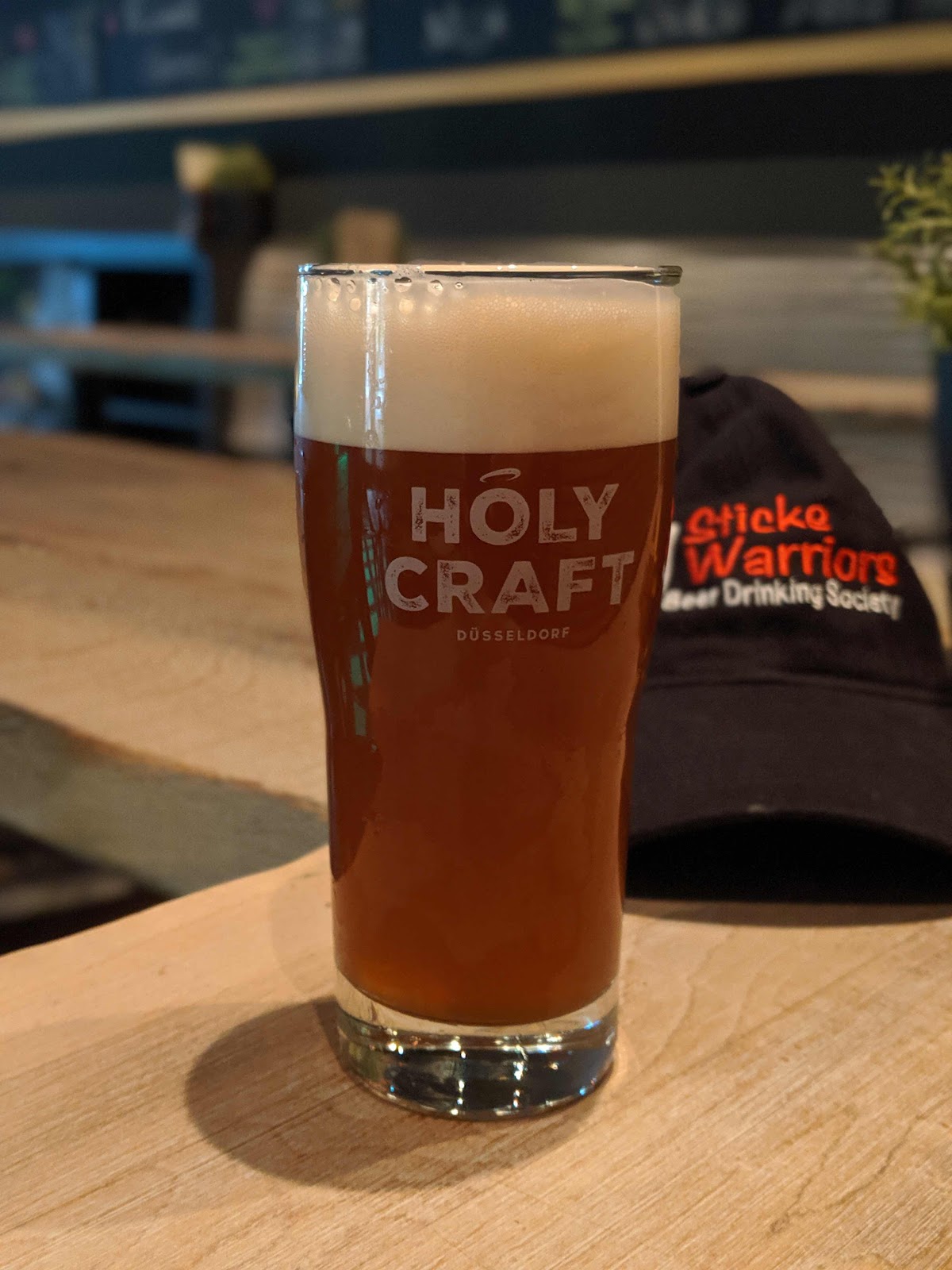 It was fine, not in the same class as the good Belgian ones but nicely tart and drinkable. A bit murky in looks and flavor.
We headed to last be to the Marktplatz, where Gunnar from Stockholm was waiting for us. We stood waving for 5 minutes — I’m sure you all saw us. We are the little group of four to the right of the stature.

That was tiring work, so it was back to Uerige for a beer or three. 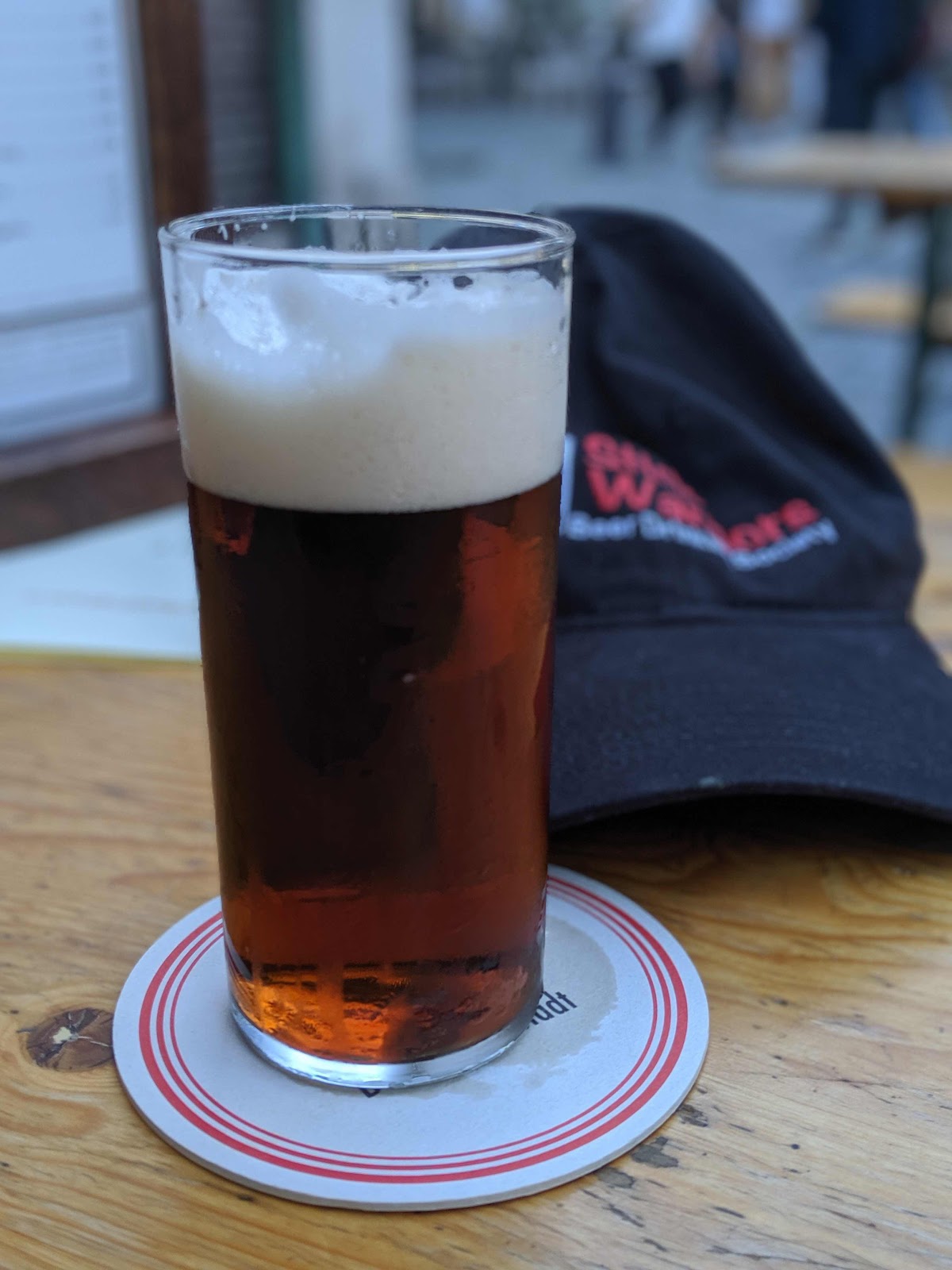 They offer a full menu in the evenings now, so I thought I’d try their Schnitzel. 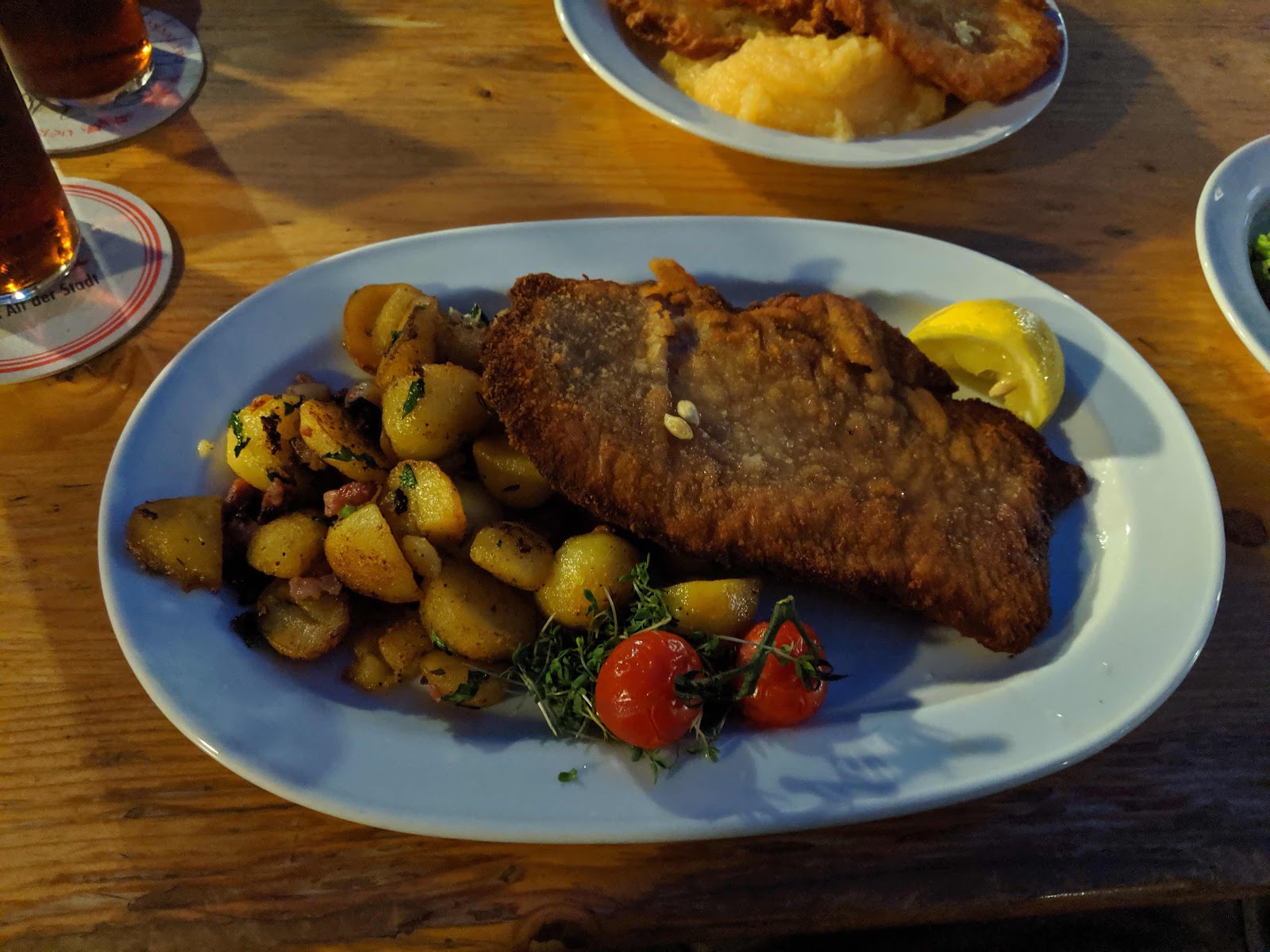 It was OK, a bit on the dry side, as if it sat in a warmer for a while. But the fried potatoes where very good.
Then it was a nightcap of Killeptisch and back to the hotel to rest up for the big day. 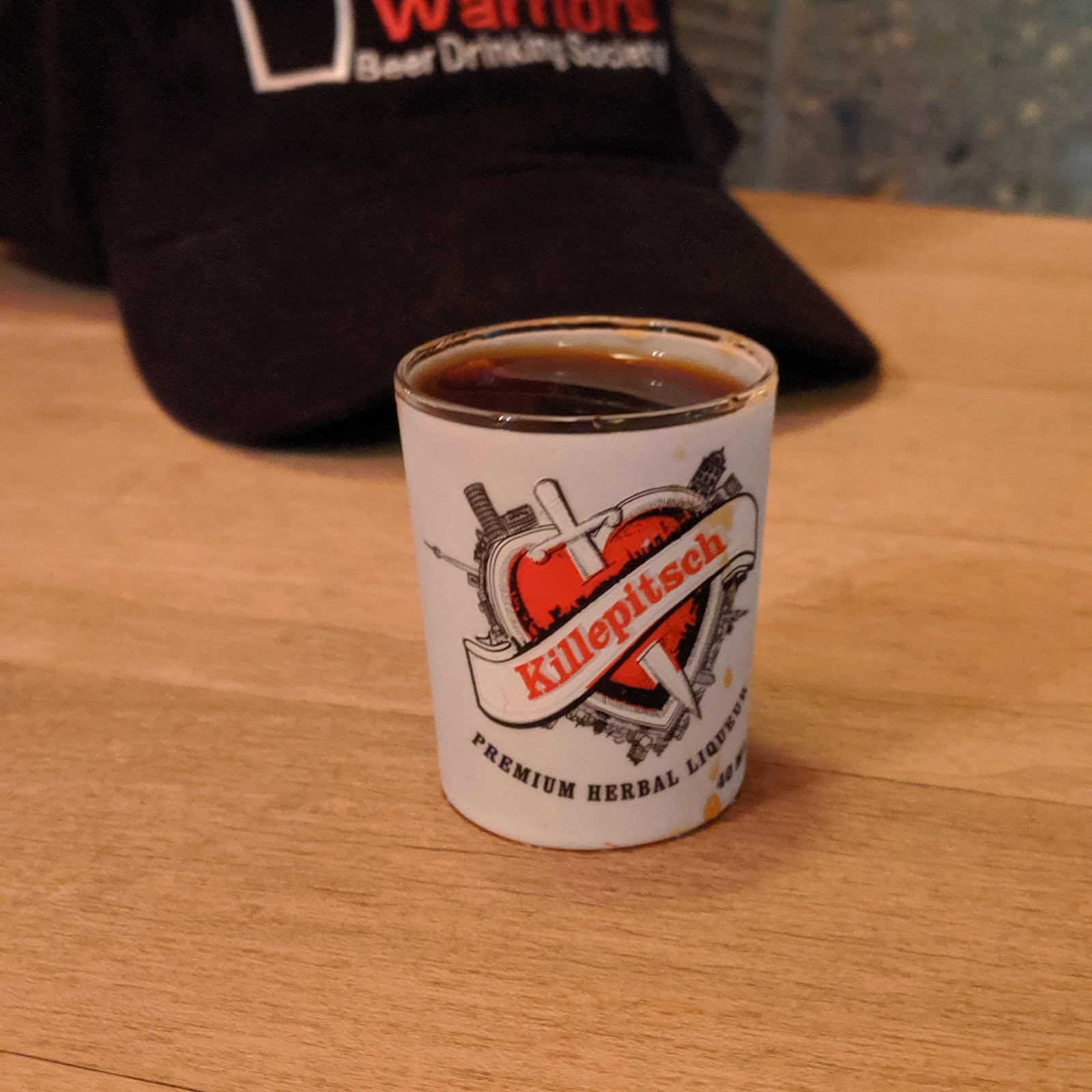 Email ThisBlogThis!Share to TwitterShare to FacebookShare to Pinterest
Labels: 2019, Düsseldorf