This the start of the 22nd “Sticke Warriors” beer tour. We started in 1998 and have done a trip every year since. I will be visiting Amsterdam, Antwerp, Düsseldorf and Bamberg. We have a small group this year, I will be meeting some of them in Antwerp and others in Düsseldorf.
One of improvements overt the past few years is you now can find a decent beer at the airport. The first beer of this trip was a Strand Brewing Beach House Amber at the Delta SkyClub at Terminal 3 at LAX. Not a huge pour but being a SkyClub member the price was right (i.e. free). 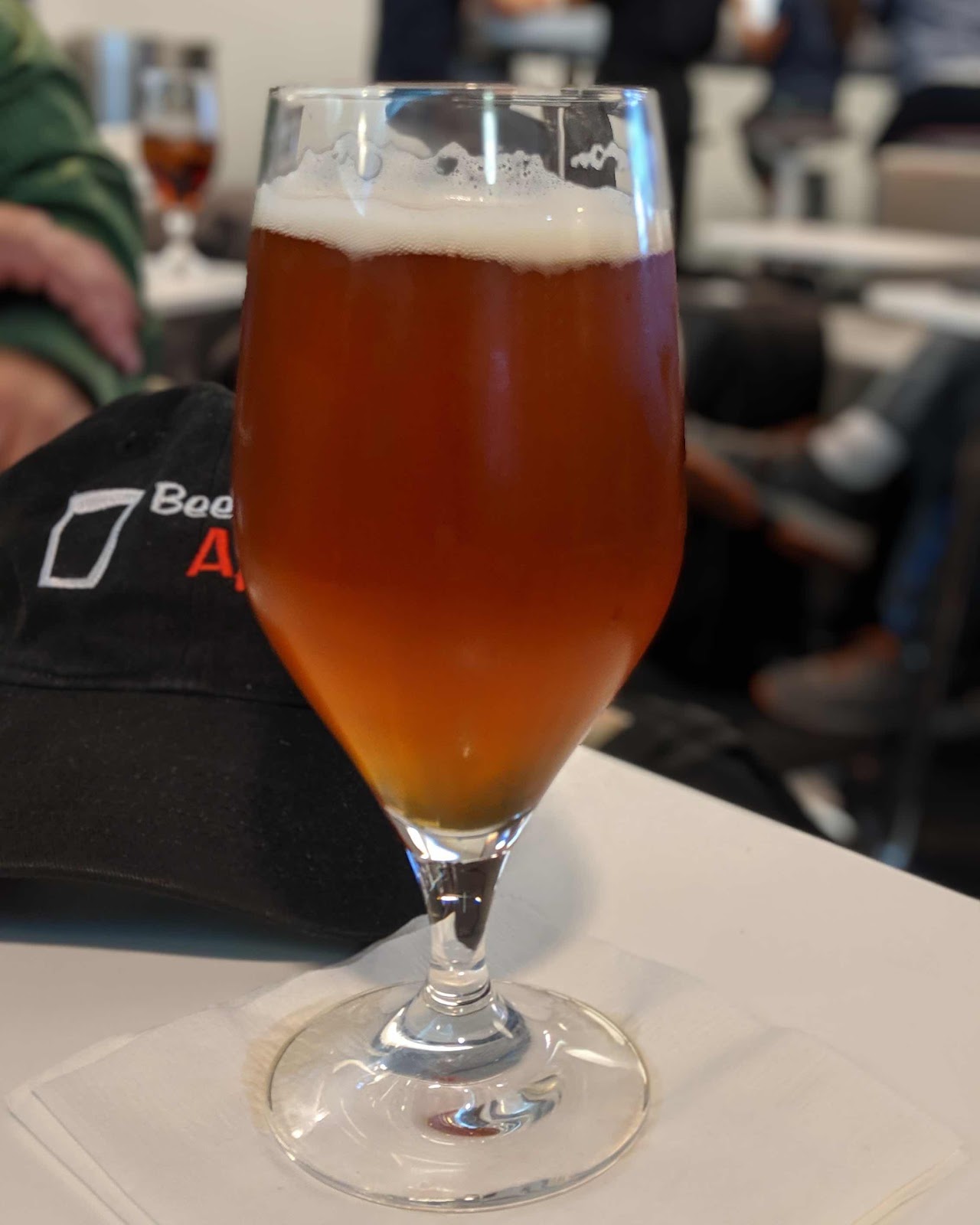 I was changing planes in Minneapolis (MSP) and as luck would have it I had to go from gate G2 to gate G4. After such a trek I decided I need a beer to recover. They have a nice system at the bars near these gates: select a beer from a menu on an iPad, swipe a credit card and a nice young man brings you your beer. Saves a lot of time. So I ordered a Summit Saga IPA and had just enough time to enjoy it before my flight was called. That is “Minnesota Nice.” 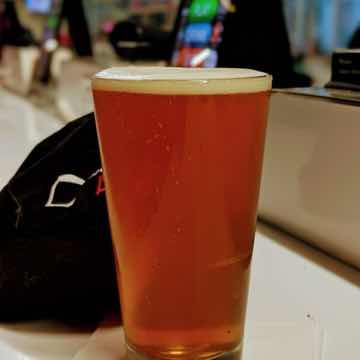 It was a terrible flight. We ended up leaving a couple hours late because of mechanical issues, the plane was absolutely full (the guy in the middle seat next to me was even wider than I was) and it was extremely bumpy. And to top it off, it took nearly an hour to to thru passport control to enter the Netherlands. They were asking many (not all) people to prove they had a return ticket. Of course tickets are not on paper these days so they folks were having to dig out a receipt or call up an email on their phone, etc. etc, Which made for a longer than average wait. And to top it off, KLM misrouted my bag to the wrong carousel. Oh, and it was raining. By the time I got to my hotel I was ready to crash. But those beers don’t drink themselves so I took a deep breath and headed out.
Not far from my hotel (500m) Foeders  which in the two years it has been open has become one of the best bars in Amsterdam. Thirty plus beers on tap, a large selections of Lambics you can buy by the glass and a huge selection of Lambic bottles. 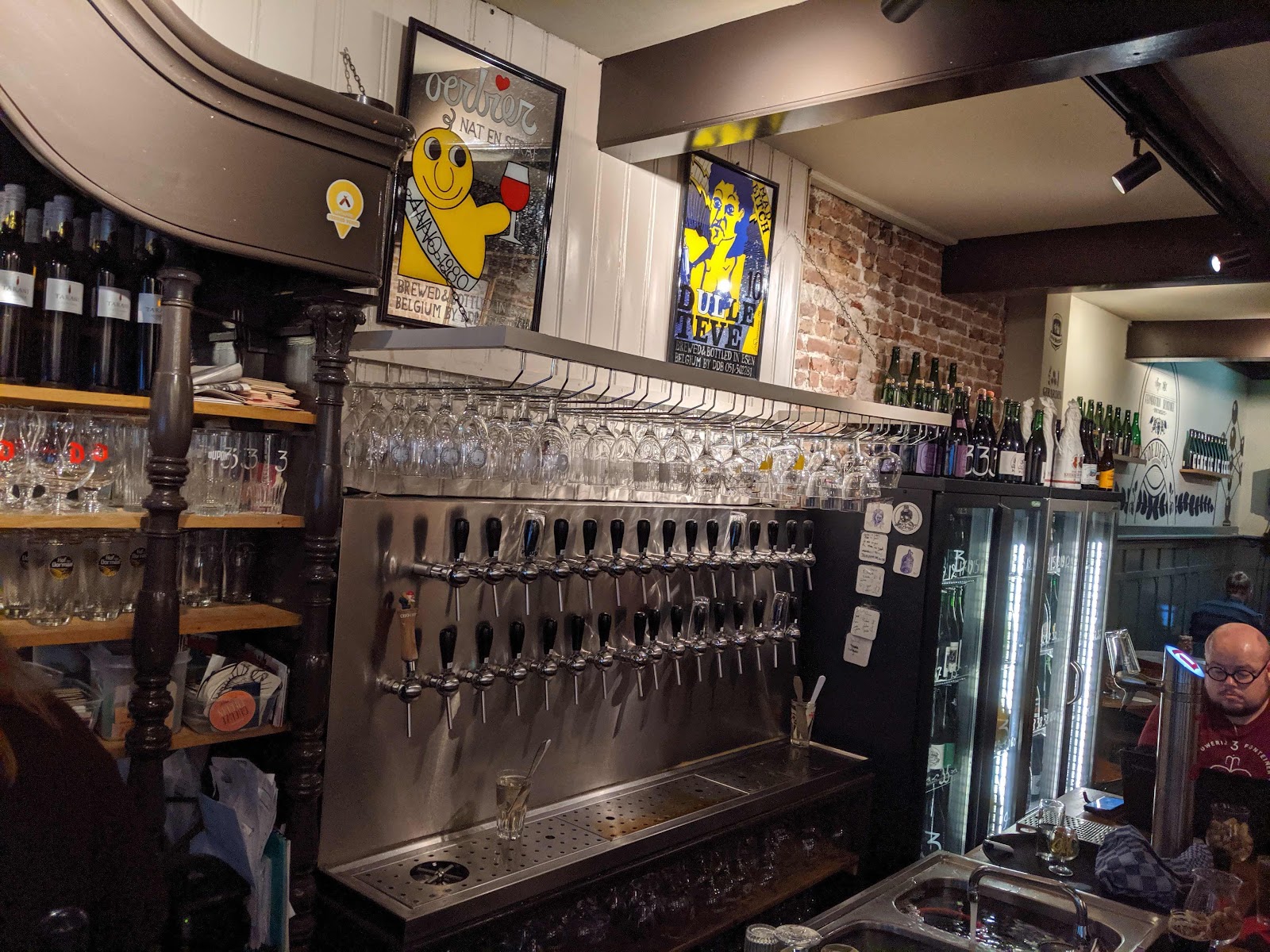 The next two pictures show most of the beers on tap — I might have missed one or two because you are standing in front of the bar. 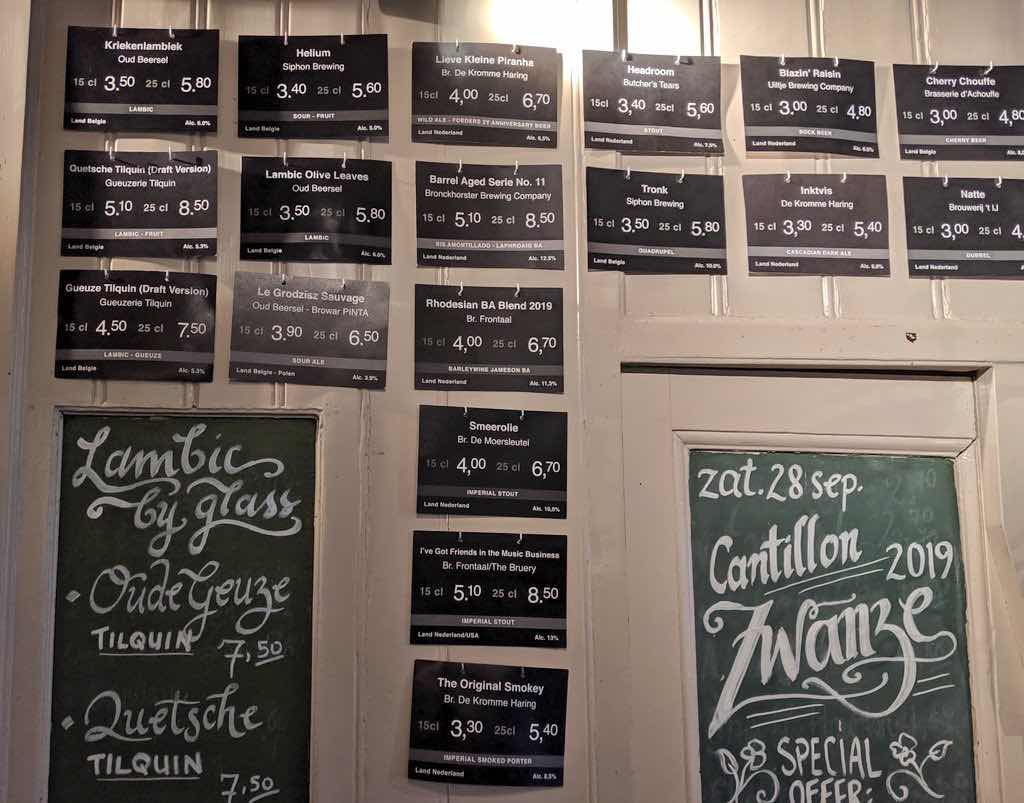 I started with the De Kronen Haring Inktvis a Cascadian Dark Ale (which in the old days was a “Black IPA”) This was a very nice beer. De Kromme Haring is in Utrecht and I’ve enjoyed every one of their beers I’ve had. Maybe a visit to Utrecht is order. 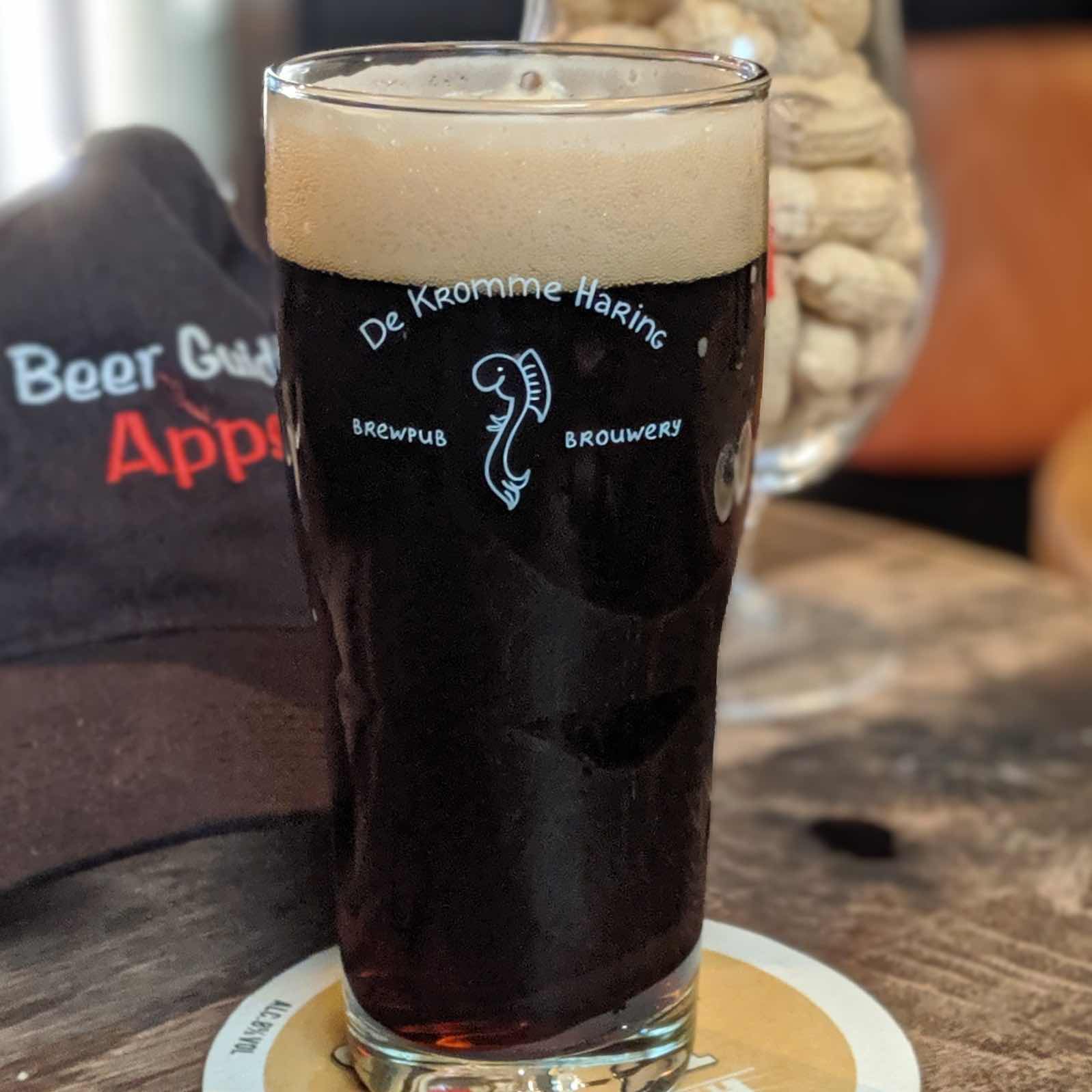 Next I tried another beer from the same brewery, the Lieve Kleine Piranha, brewed in honor of Foeders second anniversary. It would have been rude no to have one. It is a sour wild ale and the name comes from a song from the Belgian band Gorki. The beer did have a bite to it, so I guess the name is appropriate. 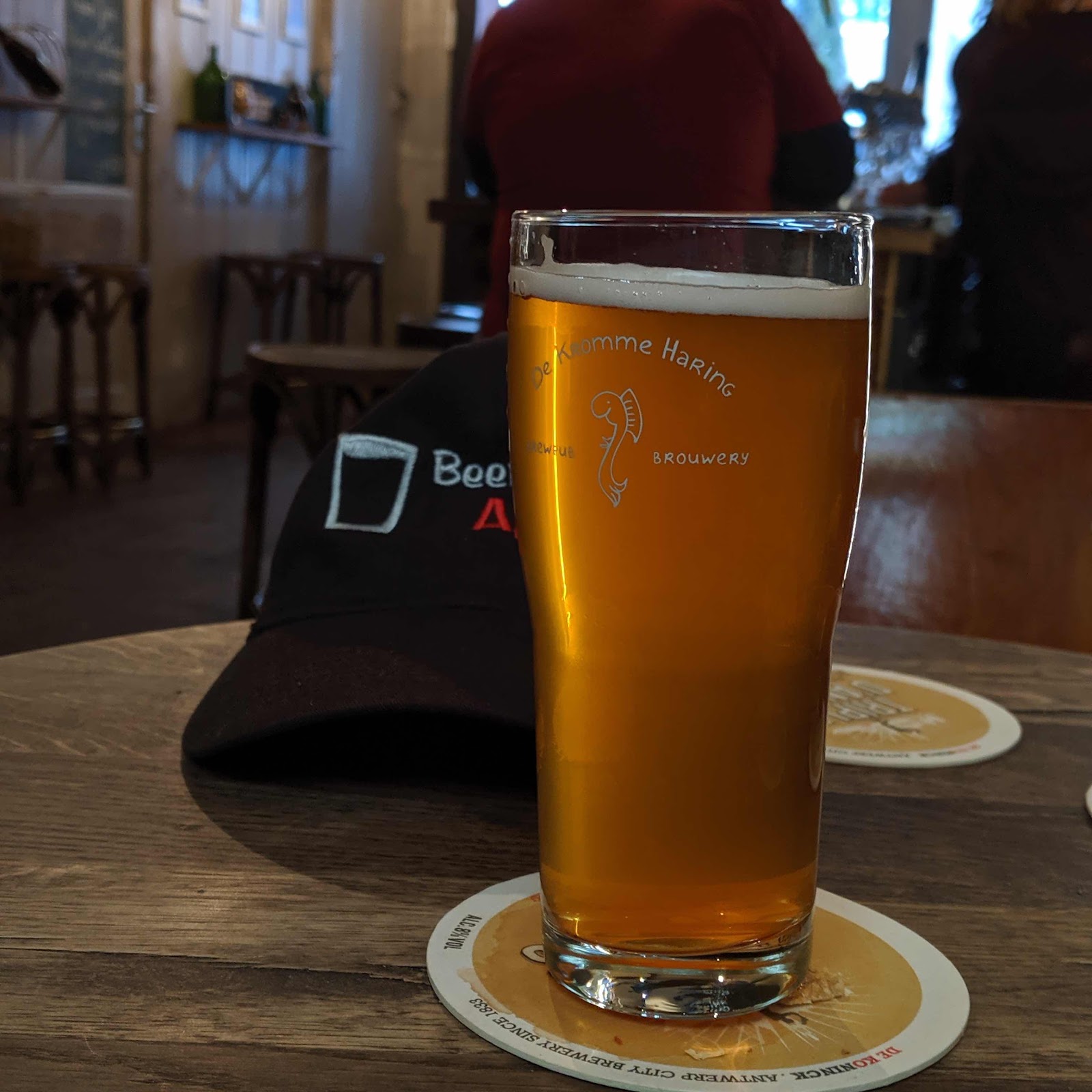 Jet lag was starting to win, so I headed back to my hotel, picking up a sandwich to go at the market. I was so tired, I didn’t eat but crashed and sleet for 11 hours.
Posted by The Mad Brewer at 10:11 PM