We were going to ride the trams today so Tom & Mike needed tickets. We had a hard time fining a working ticket machine but finally did. We waited a bit and caught the Number 11 tram. A couple of stops from Astridplein the tram stopped in the middle of the street and the driver used what I assume was foul language and went out the door. It turns out there was a parked car that was sticking too far into the street. He got on his radio (I assume to call a tow truck) but after about 10 minutes another guy with a radio showed up and with the second guy guiding, we barely squeezed by the car — we did hit is front side bumper but there appeared to be no damage to car or tram.
With that excitement over, we soon arrived at Dageraadplaats and were ordering beers at ZeeZicht. I started with an Ename Blond, the others had Chimay Tripel. 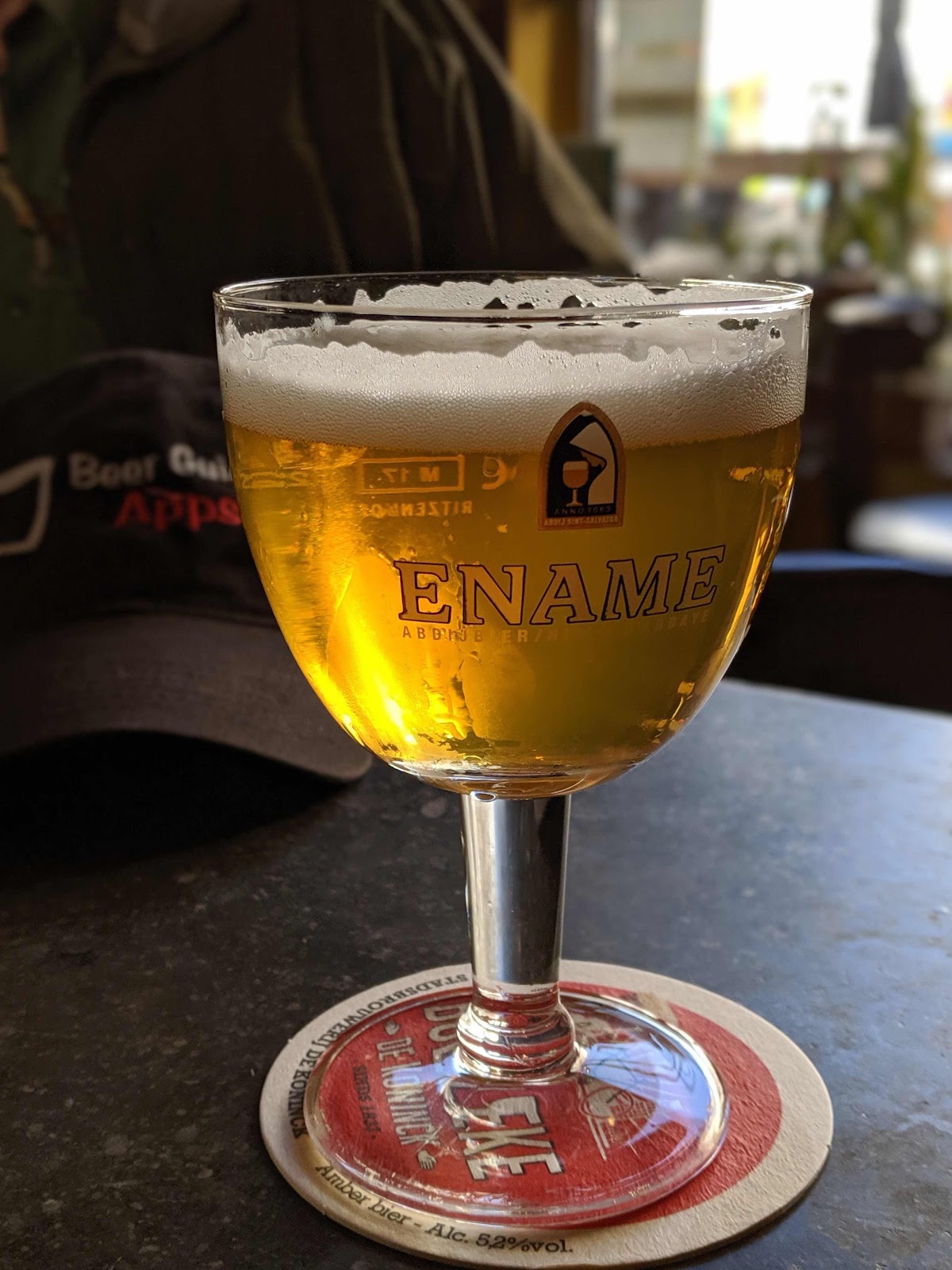 The tap list isn’t extensive but I’ve always found something to drink.  The bottle list isn’t bad either.

The soup of the day was Mushroom Soup so we all ordered one. It wasn’t what was expected — more of a vegetable soup with lots of mushrooms. It was really good and came with some think slices of rye bread. It hit the spot. I ordered another beer — this time the Chimay Tripel — to go with it. 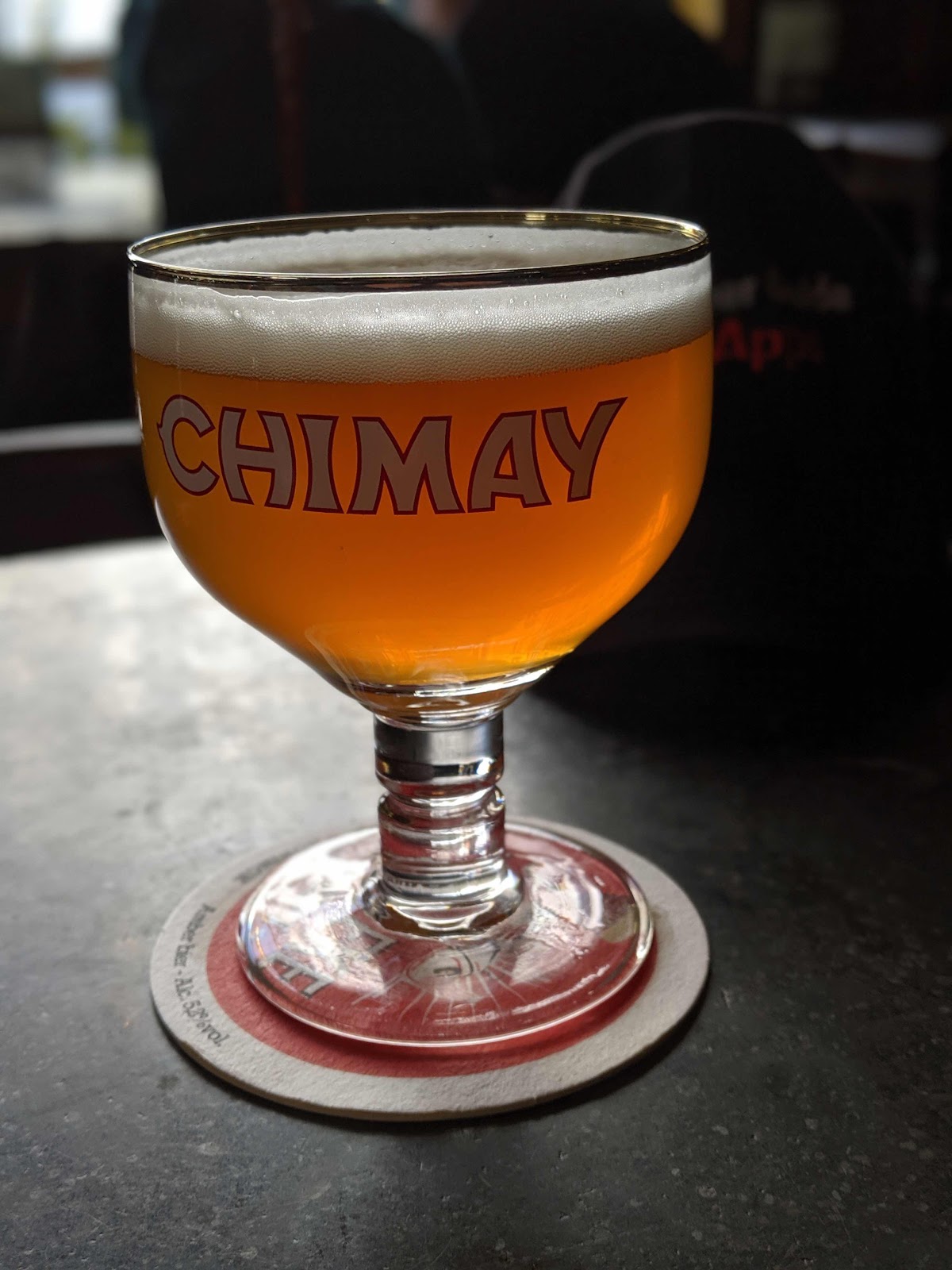 ZeeZicht is a very cozy and comfortable place and I recommend it if you want to get out the the city center.  The area also has large selection of Art Nouveau houses built around 1900 and is a protected architectural region.
Across the square from ZeeZicht is another interesting cafe, Moeskop. It doesn’t have as many taps but it has a good and varied bottle selection. 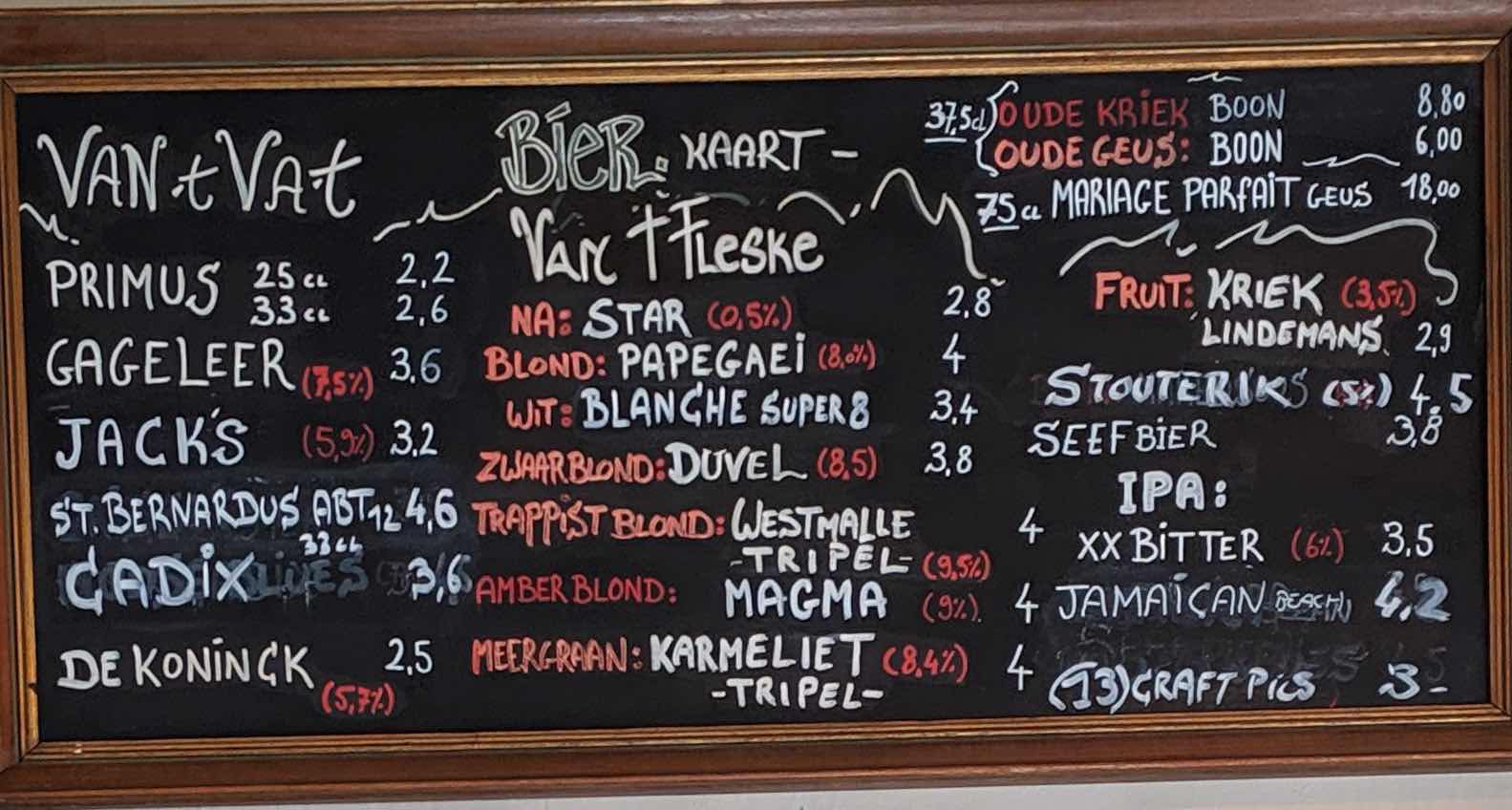 I ordered the Cadiz Super Dry Hopped, brewed by the local Antwerpse Brouw Co. (The brewers of Seef, hence the glass). Mike copied me and Tom had a St Bernardus. 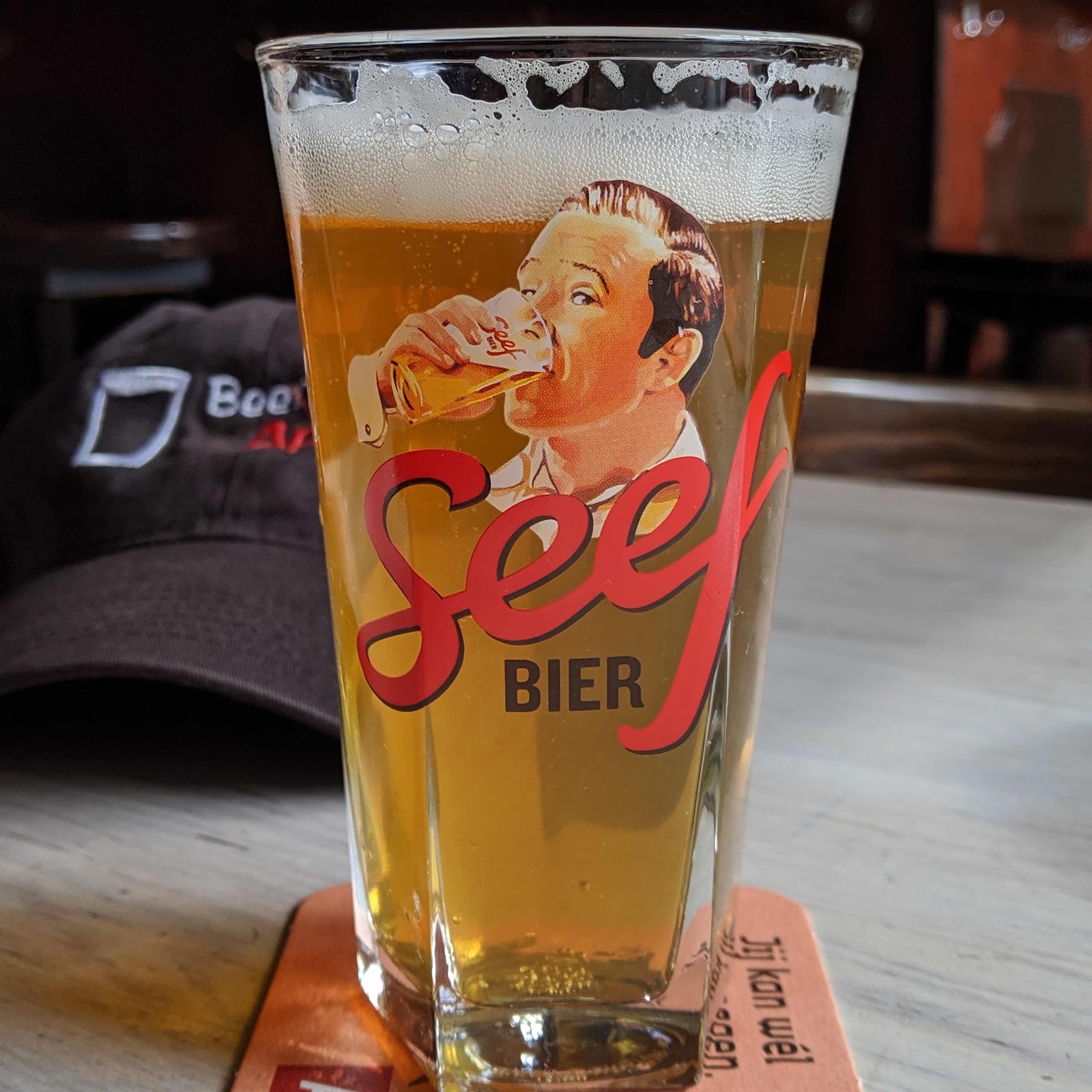 We were behind schedule so it was one beer and done then back to the tram. Soon we were at Speciale Belge Taproom, hidden back in a complex that was once a military hospital. 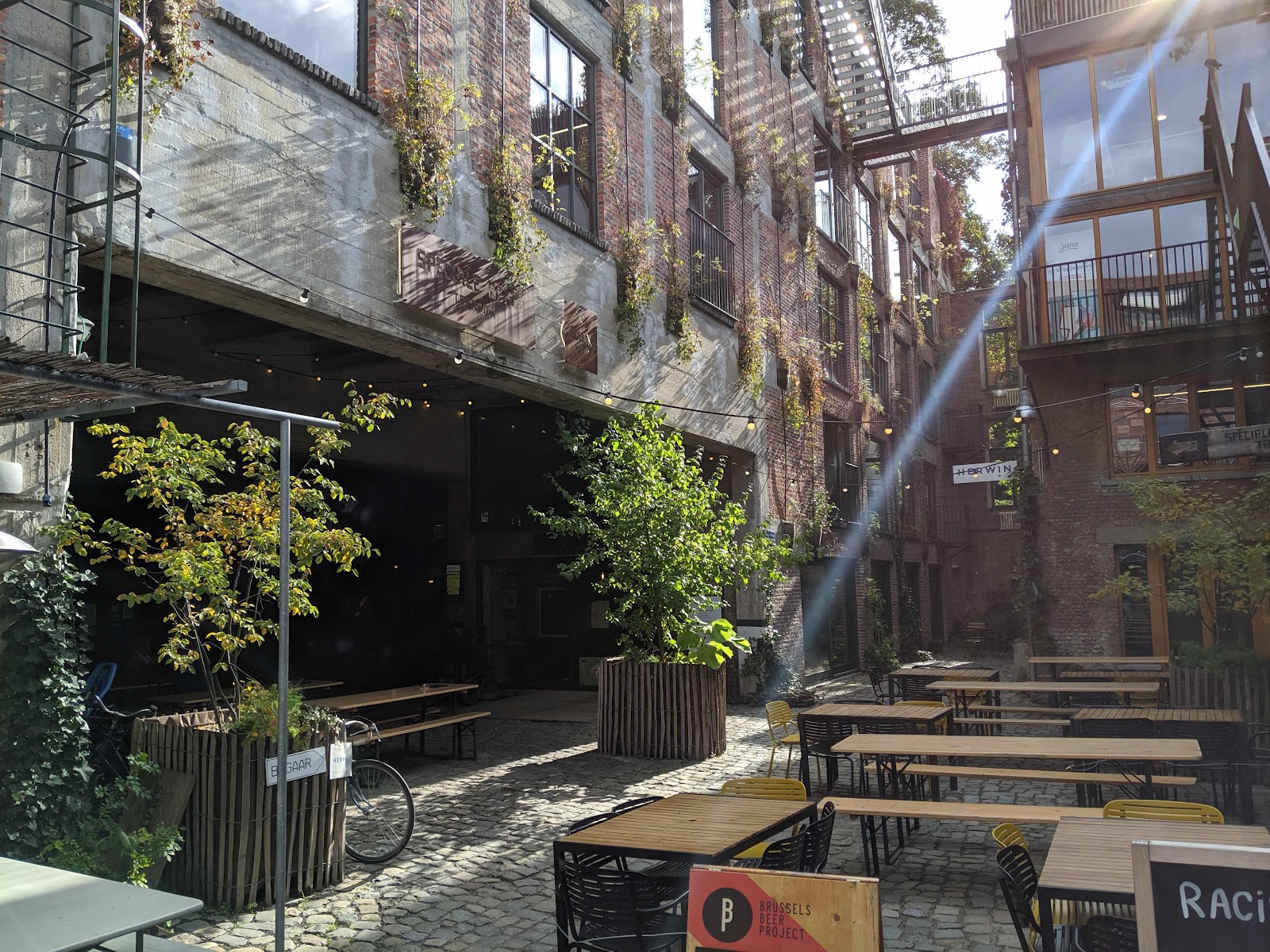 I ordered a Brasserie de le Senne Taras Bulba and the others had Oud Beersel lambics, one infused with hibiscus  and the other with green tea. They were interesting but I like my Taras Bulba. 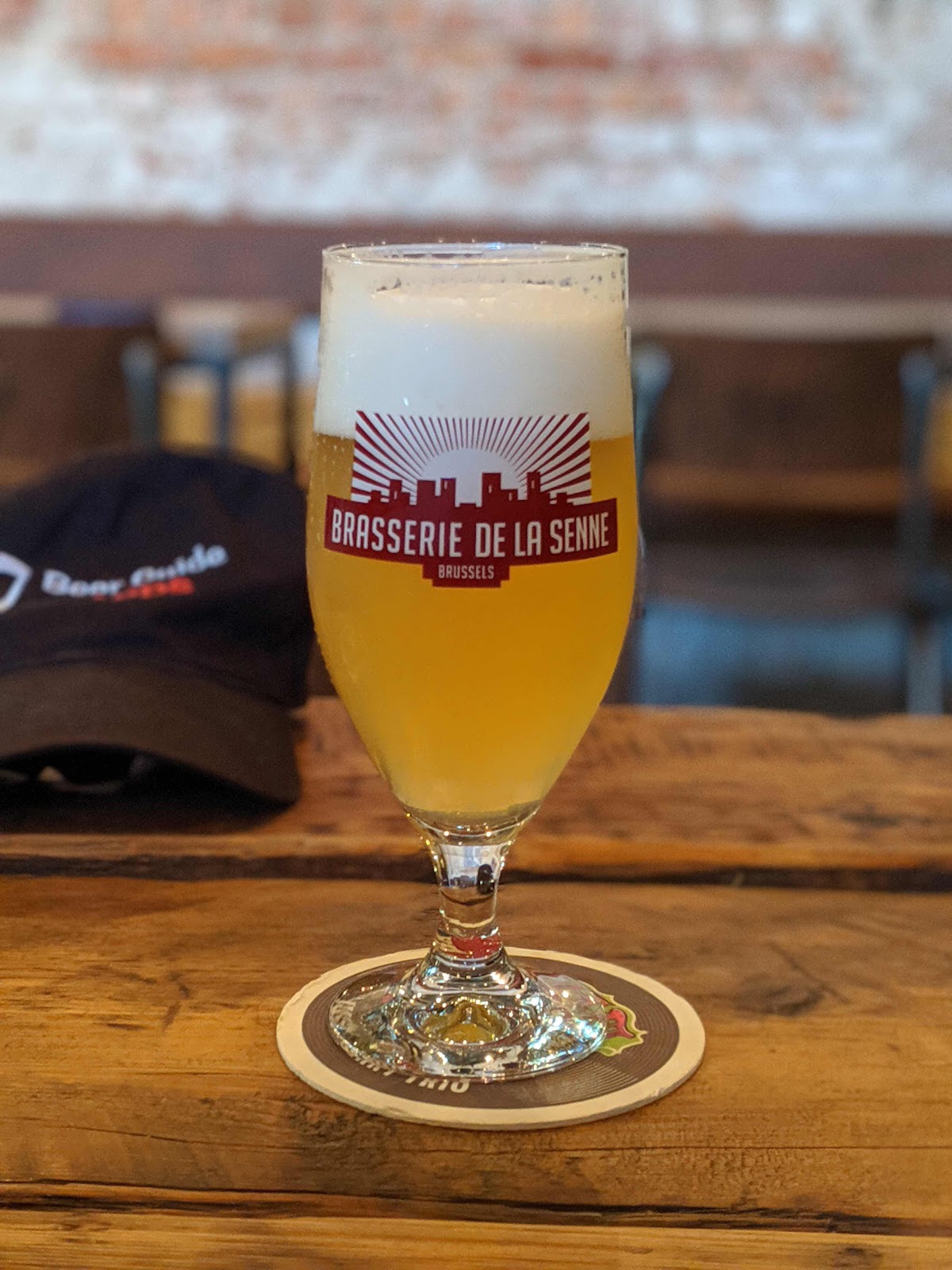 They have 18 taps and a growing bottle selection and are in the process of installing a brewery, which they hope to have operating by the end of the year. 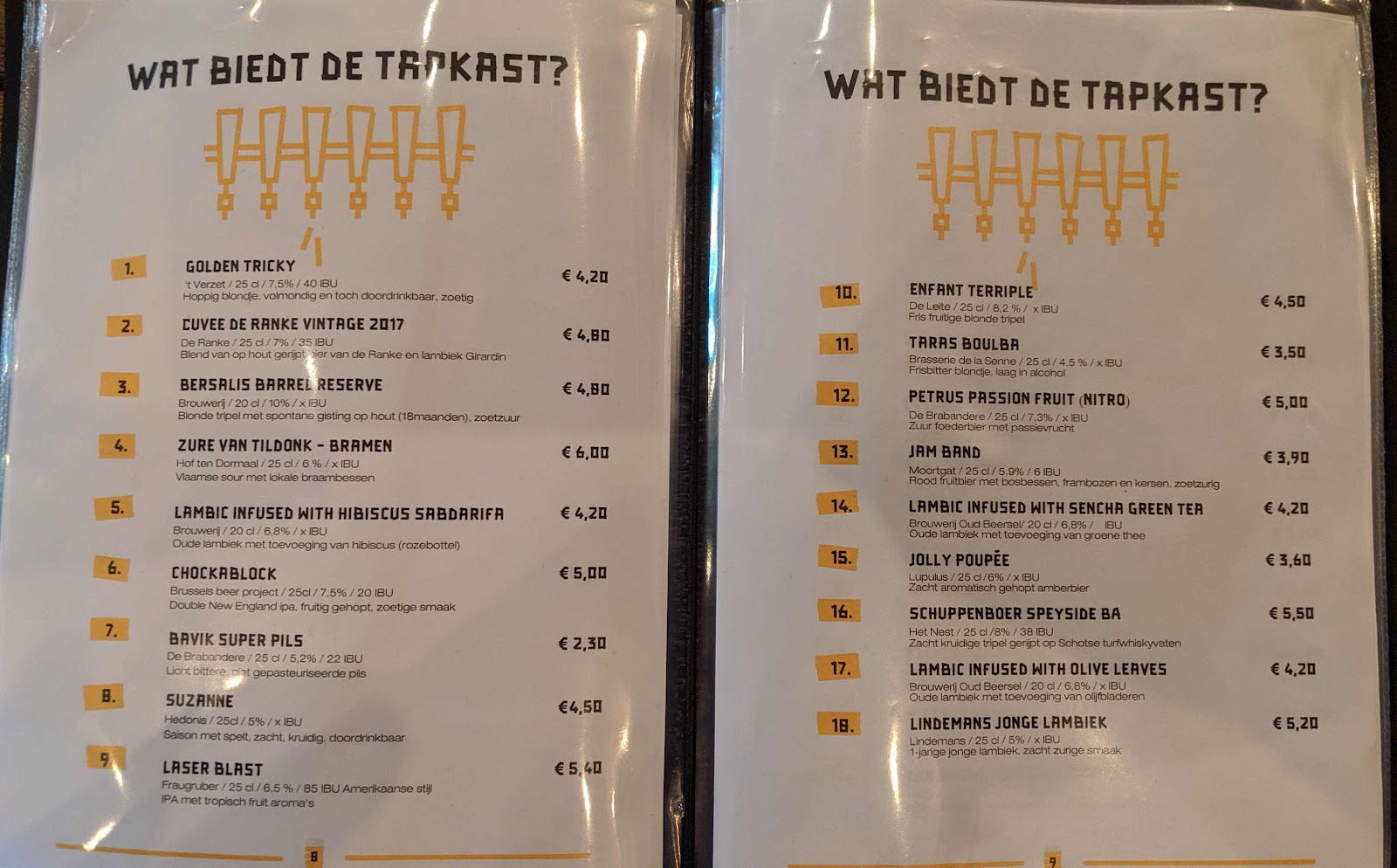 It was getting close to 4pm so went back and caught our tram and were soon at the Kulminator, a few minutes before they opened. It turned out to be a quiet night and we needn’t have rushed to get seats. 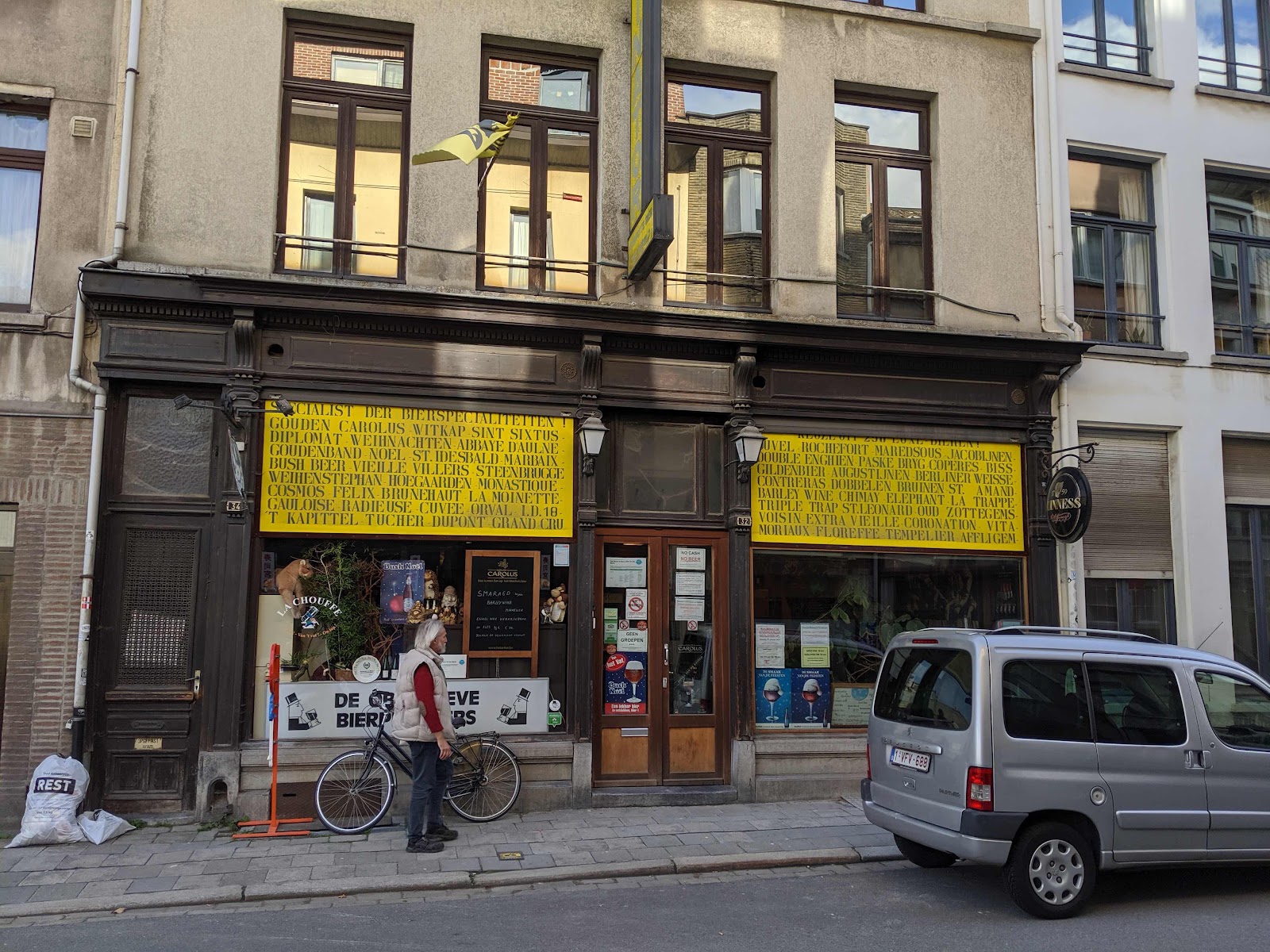 I started with the Het Kapittel Abt. It wasn’t as good as the taste I had of Tom’s last night, but I managed to finish it. 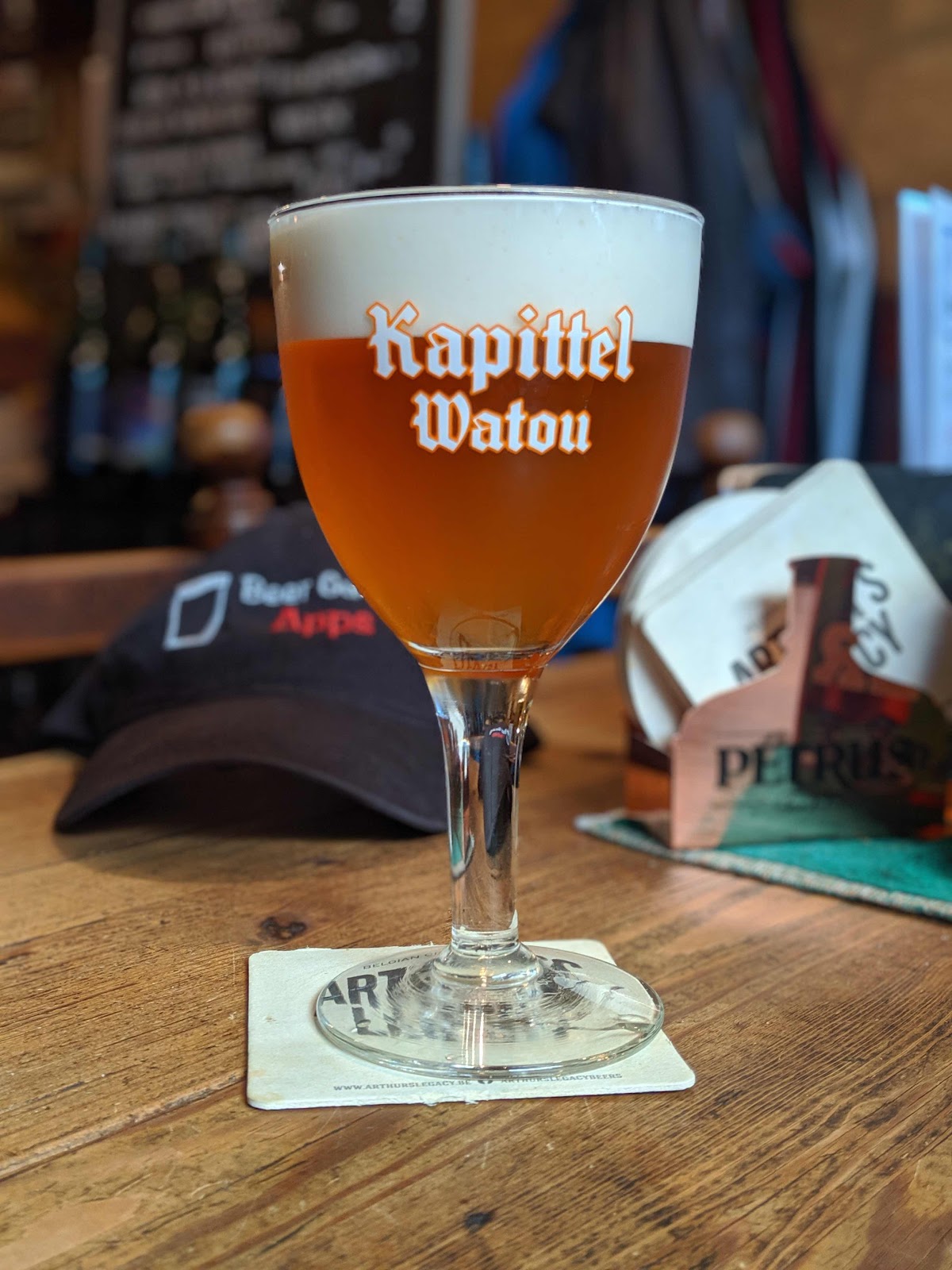 It is important to stay hydrated... 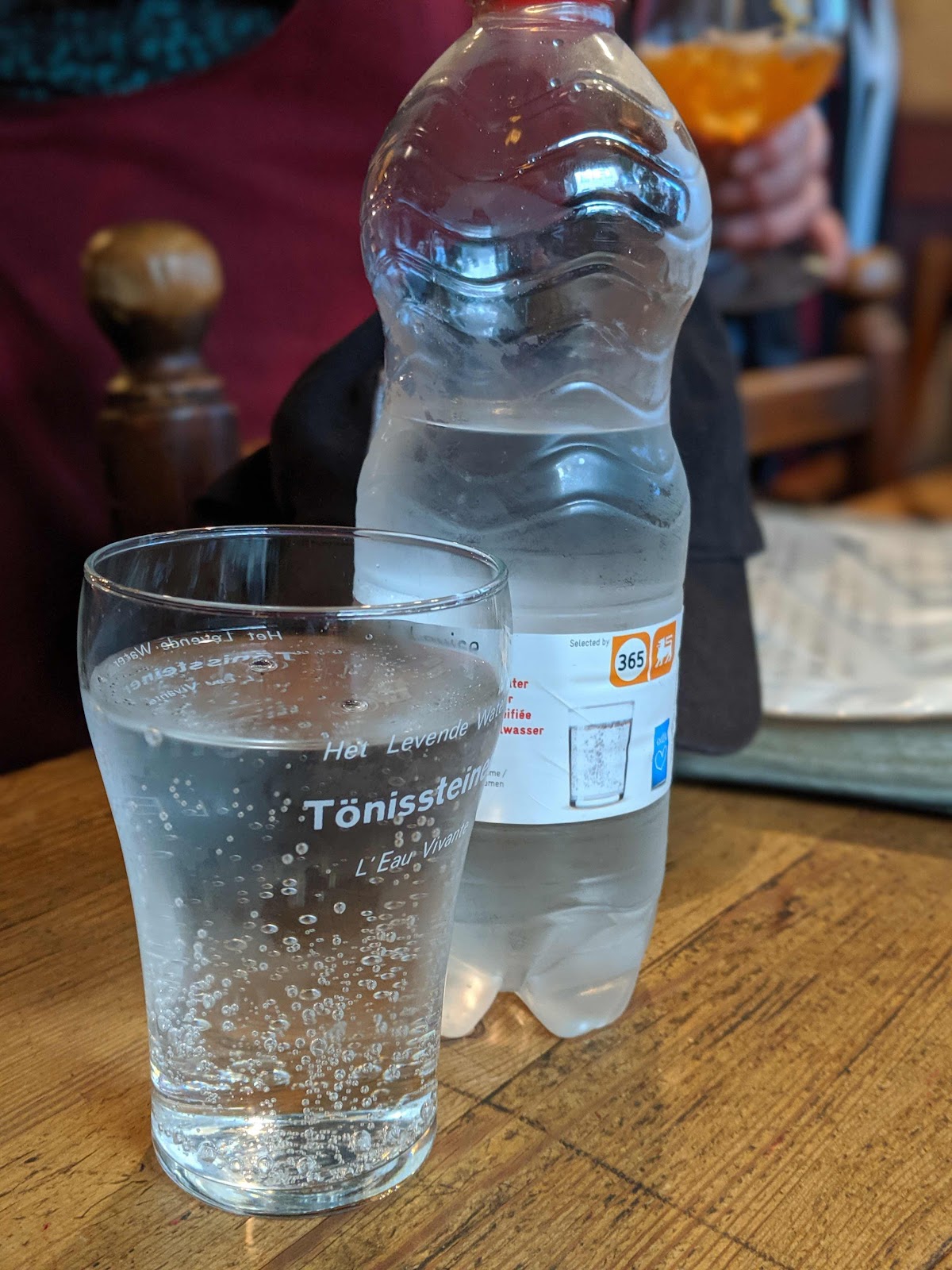 Tom ordered a De Dolle Dulle Teve and that sounded good so I had one too. Turns out the had misfiled the new ones so this was from 2007.  I like my triples younger but Tom was happy. 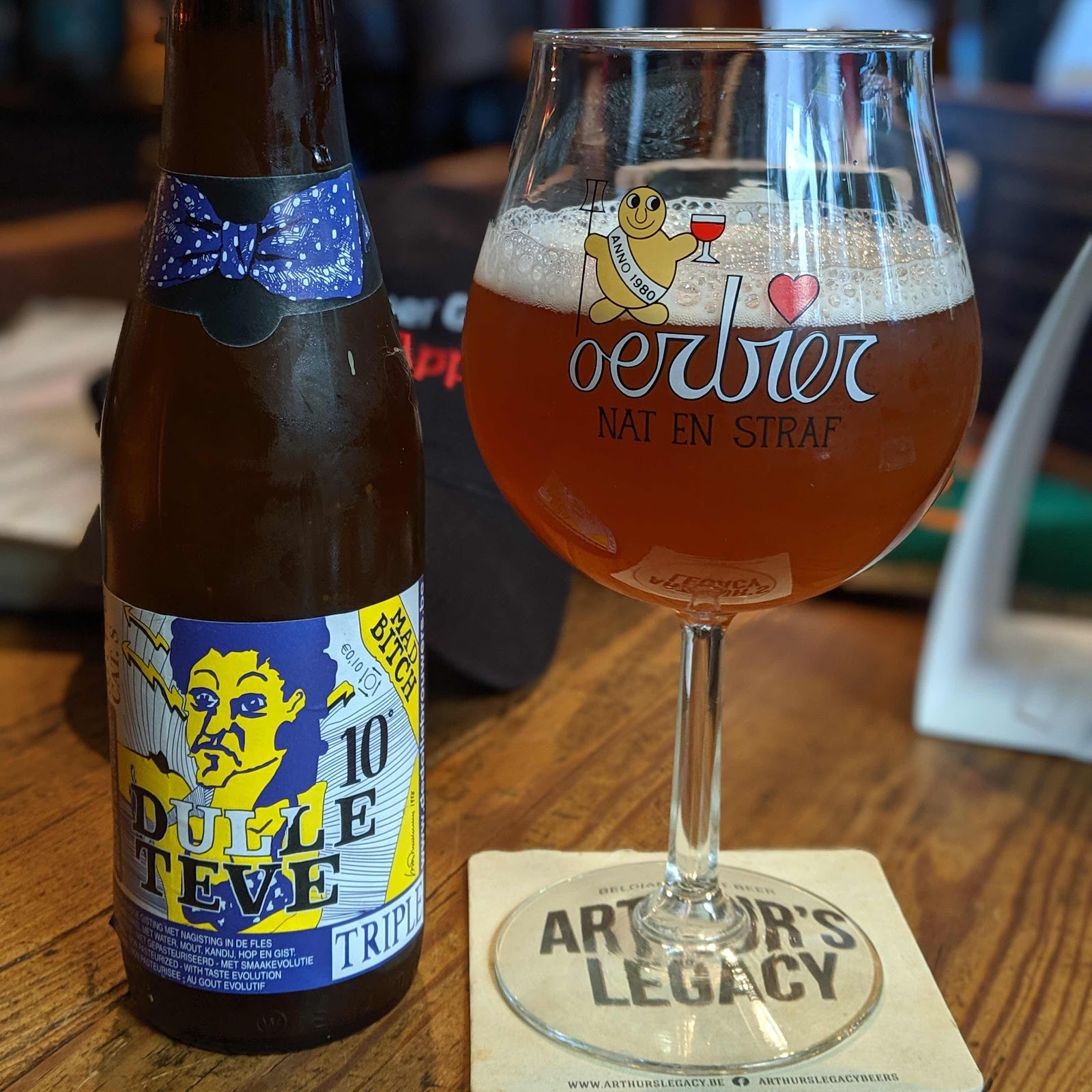 I asked how old the Orval that had was, and it turned out to be less than 2 months old. Sign me up! 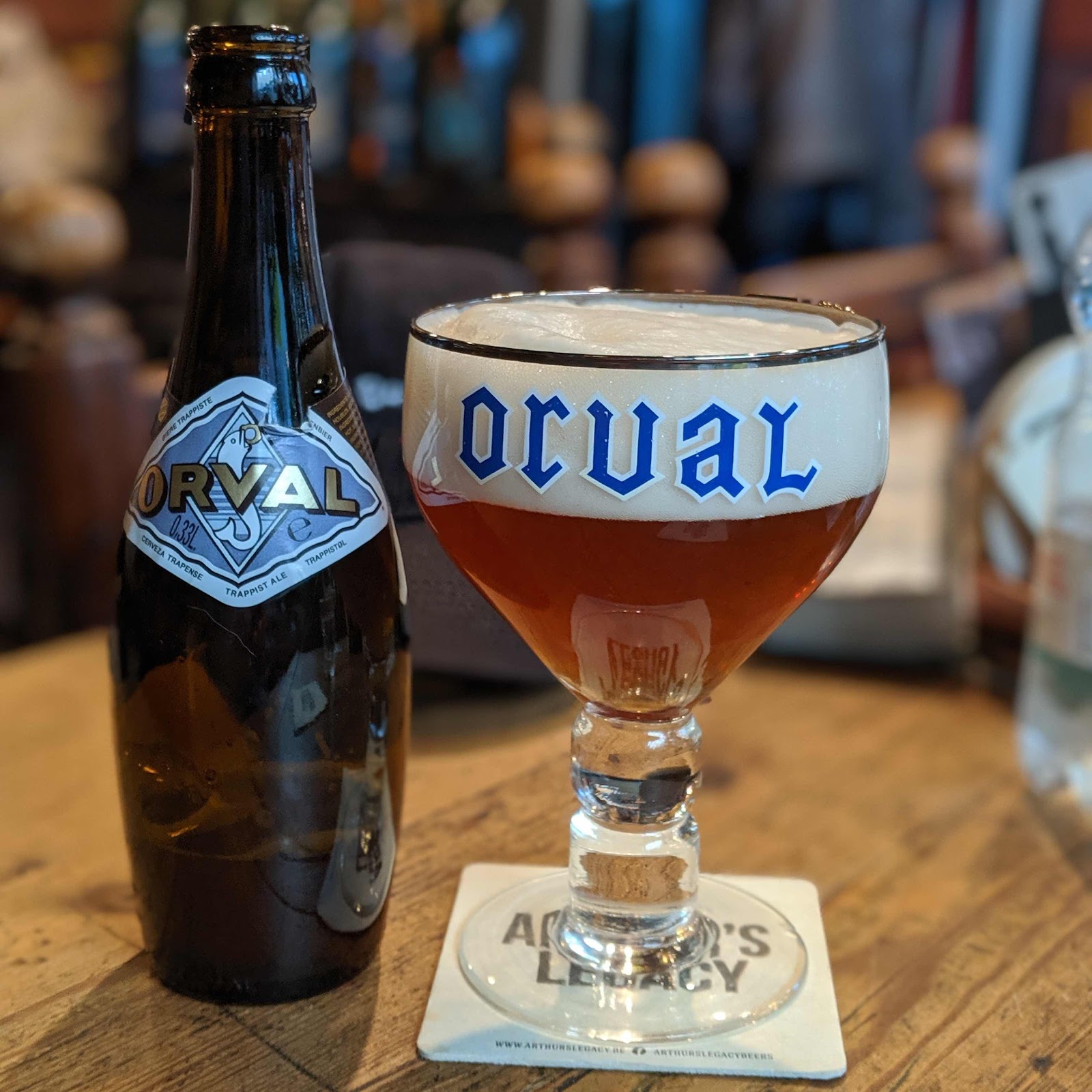 I love this beer when it is fresh. Well, I also love it when it is aged a bit. I guess I’m a sucker for Orval.
They had a table tent for Urthel and I have some fond memories of this beer from days gone by, I ordered the Saisonniere. It was find, but I think my expectations were higher. Could be me, could be the beer. Probably a bit of both. 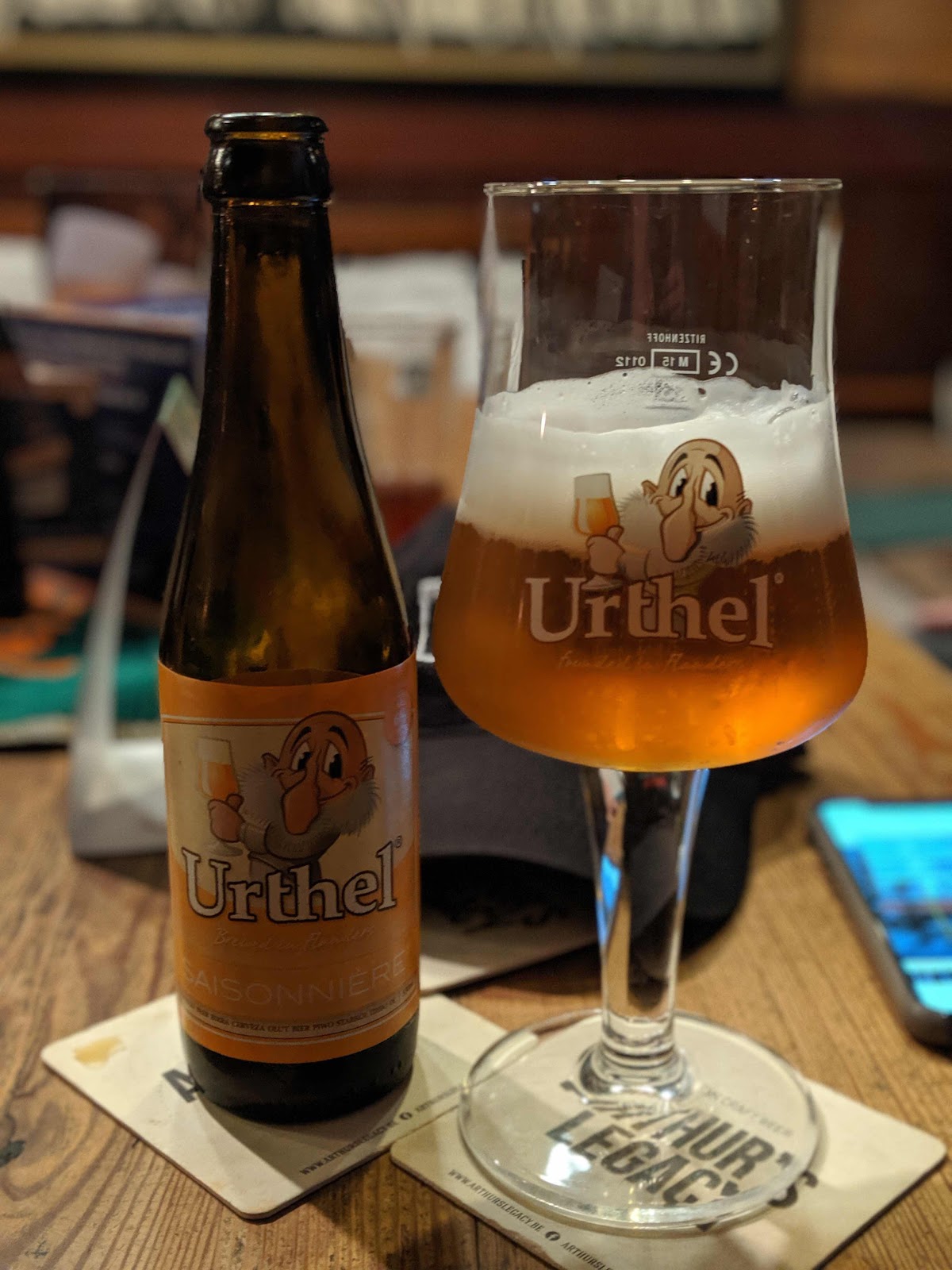 We started to get into the heavy lifting. Tom and I ordered a fresh (2018) Stille Nacht and asked for one a few years old. We got the 2015. 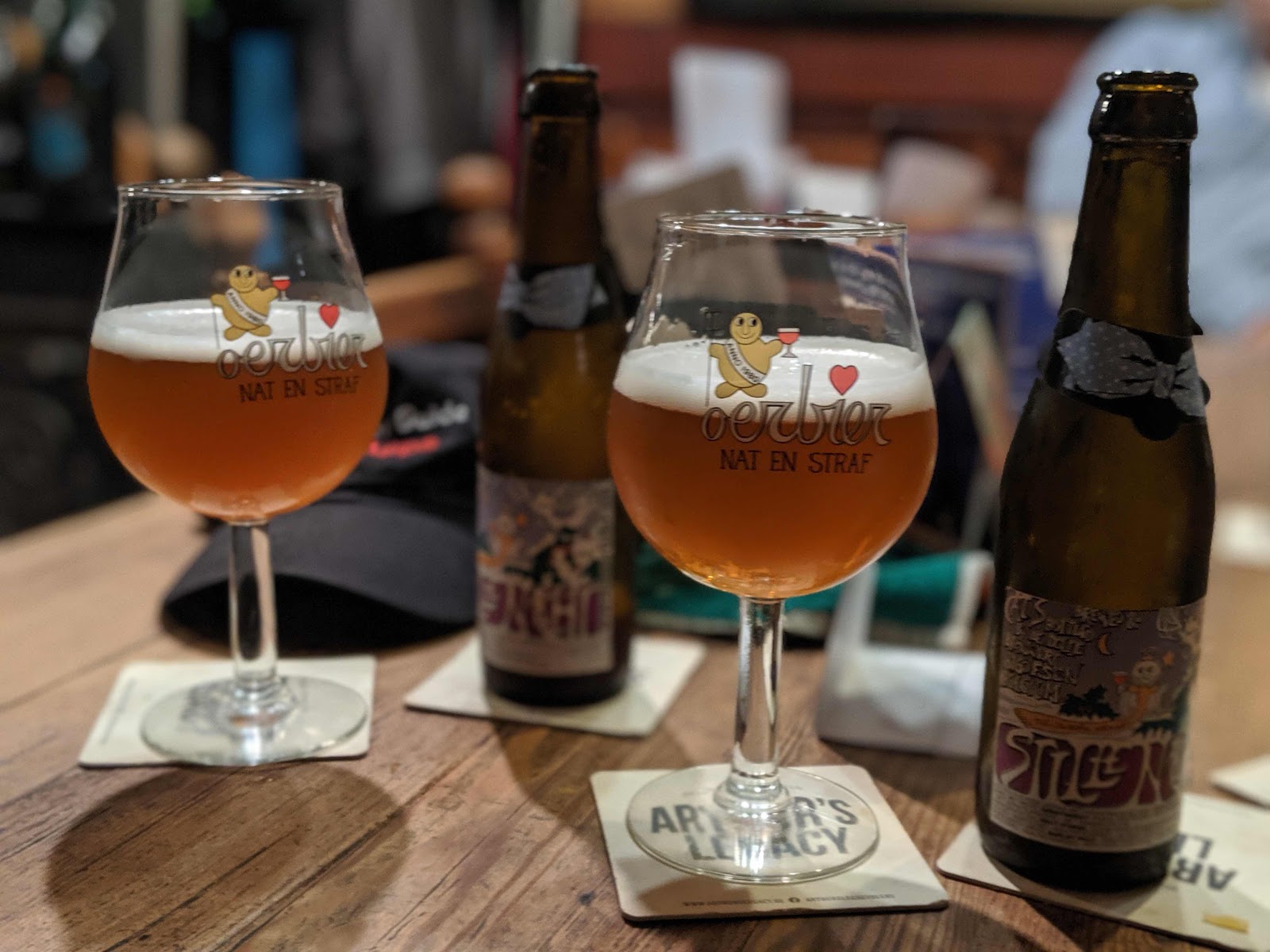 They were both very good. I preferred the 2018 and Tom the 2015 so it worked out well.
Tom wanted to try the Mikkeller Big Worster barleywine. I stayed with the Mikkeller Black. I find the barley wine to be a little bit, well, “wine-y” 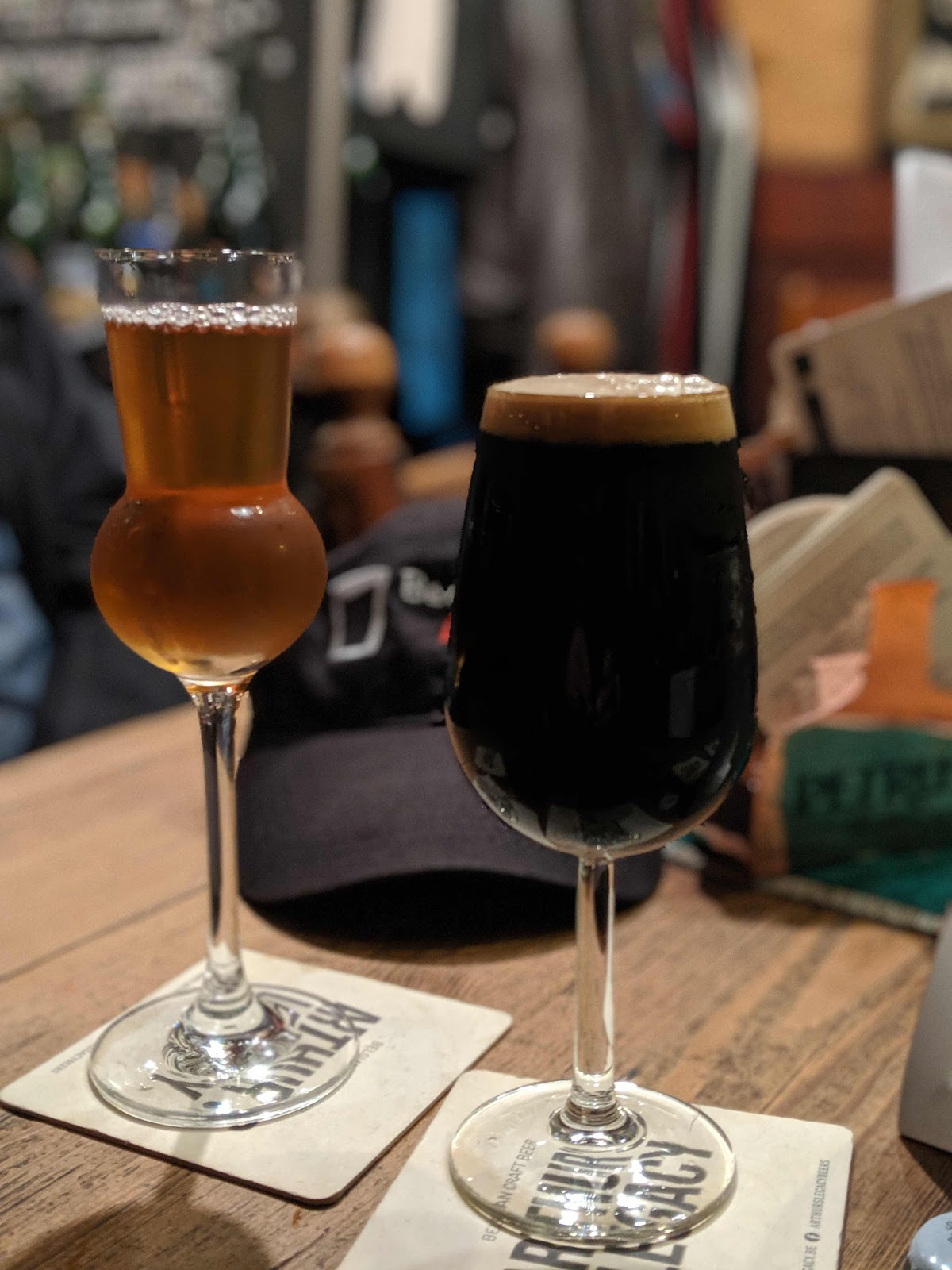 We thought the Mikkeller Black needed some company so we split a bottle of De Struise Black Albert. It is “only” about 13% so quite a bit lower in alcohol than the Black but it stood up well. 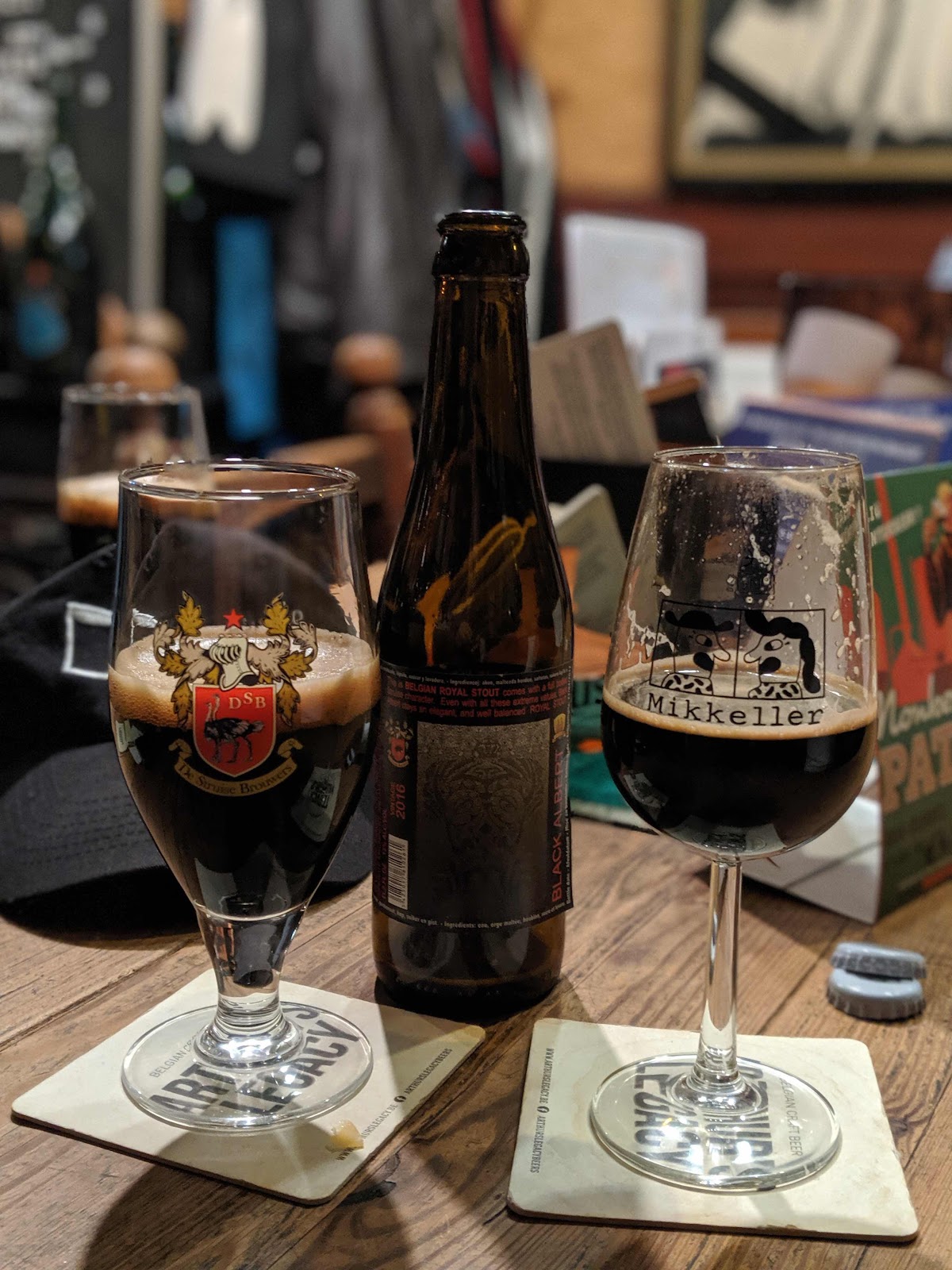 At this point we were starting to get silly (“starting?”) so we called it a night and stumbled back to the hotel.