I wasn’t sure where I wanted to go today, so the default ruled — In De Wildeman, my home away from home in Amsterdam. Down a narrow alley between Nieuwendijk and Nieuwezijds Voorburgwal it can be hard to find. But worth the effort. 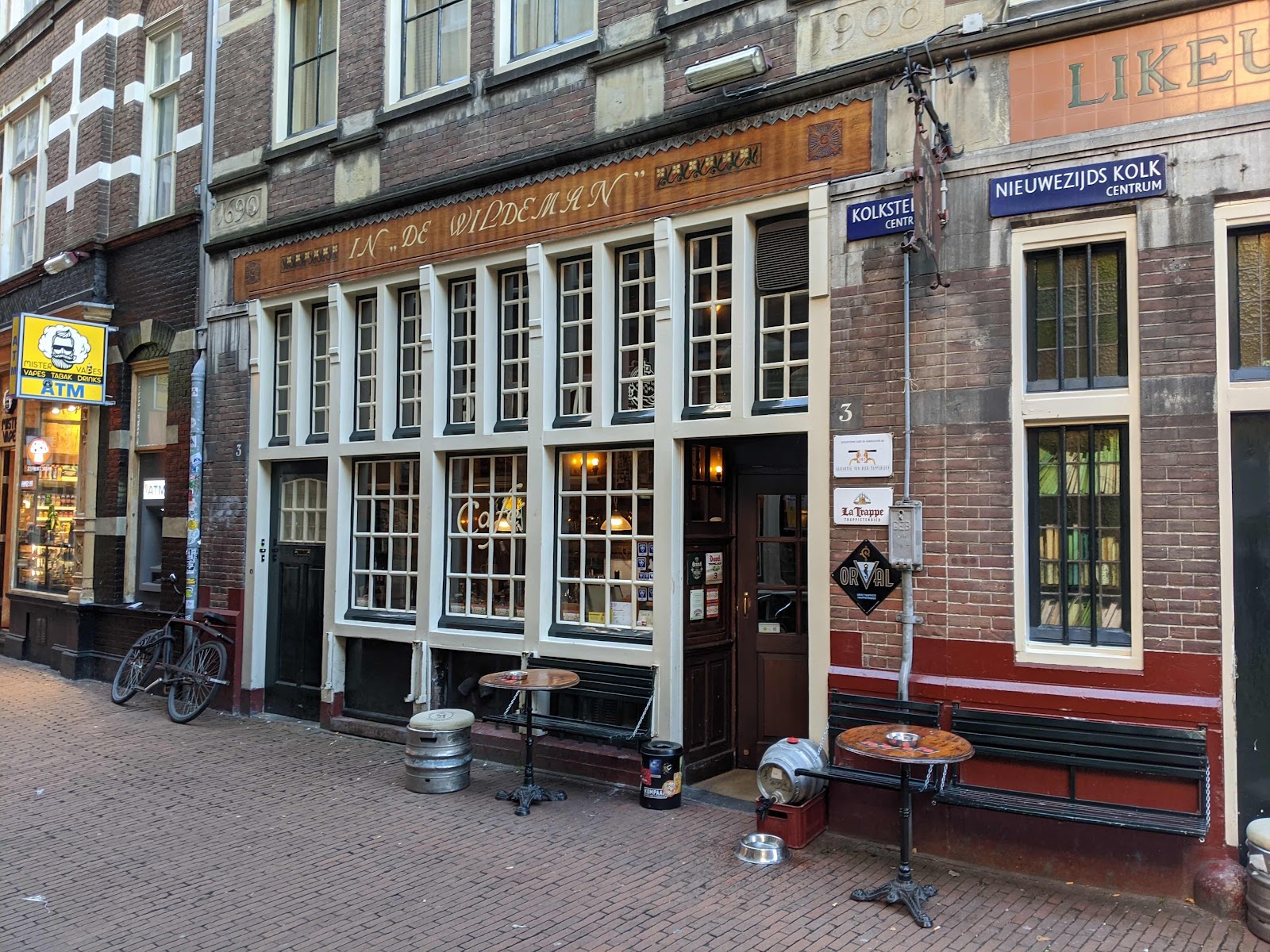 When you walk in the door, turn around and you’ll see the tap list above the door. 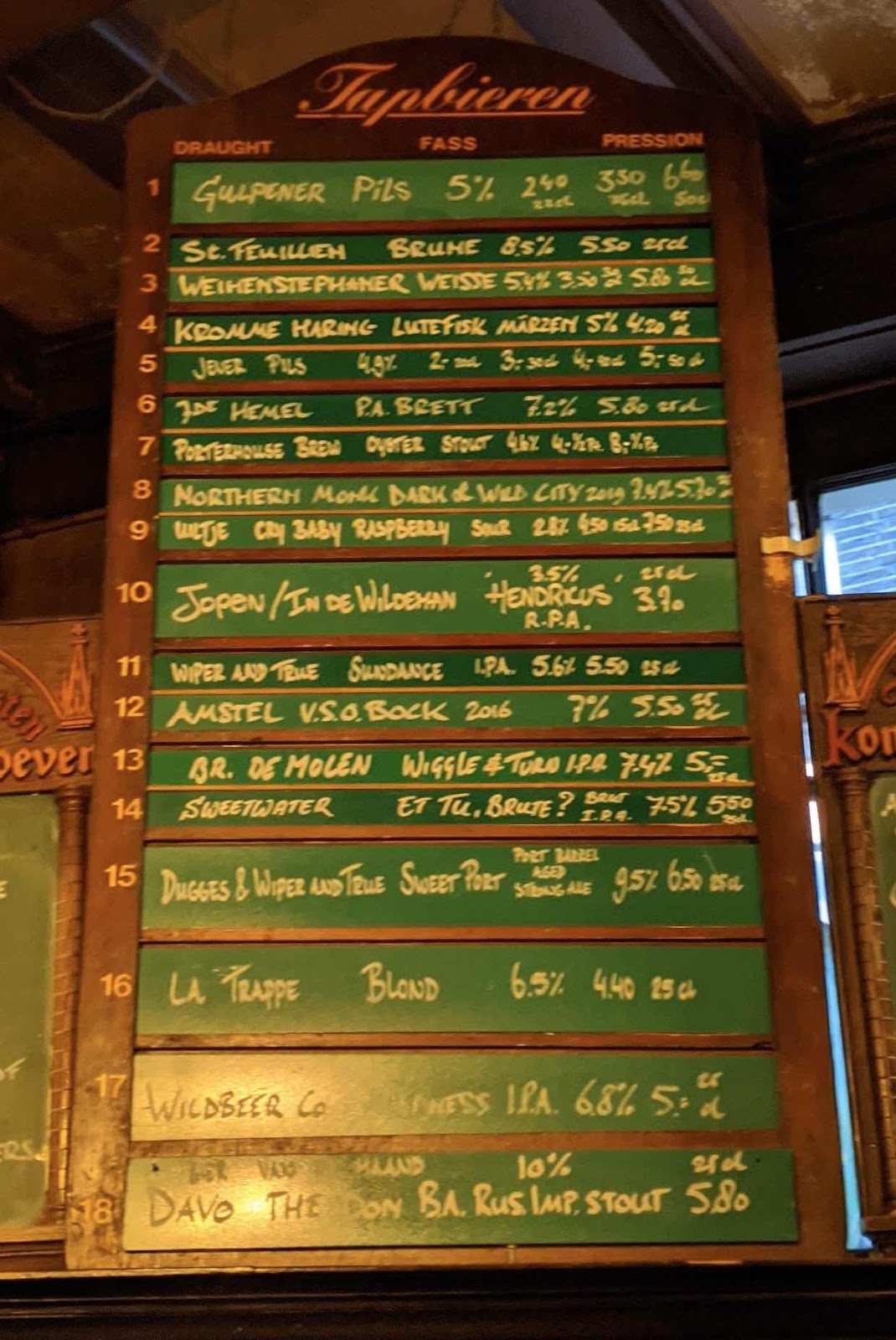 I started out with the beer that Jopen brewed for them, the Hendricus RPA. Nice and easy at 3.5%. Tasty, too. 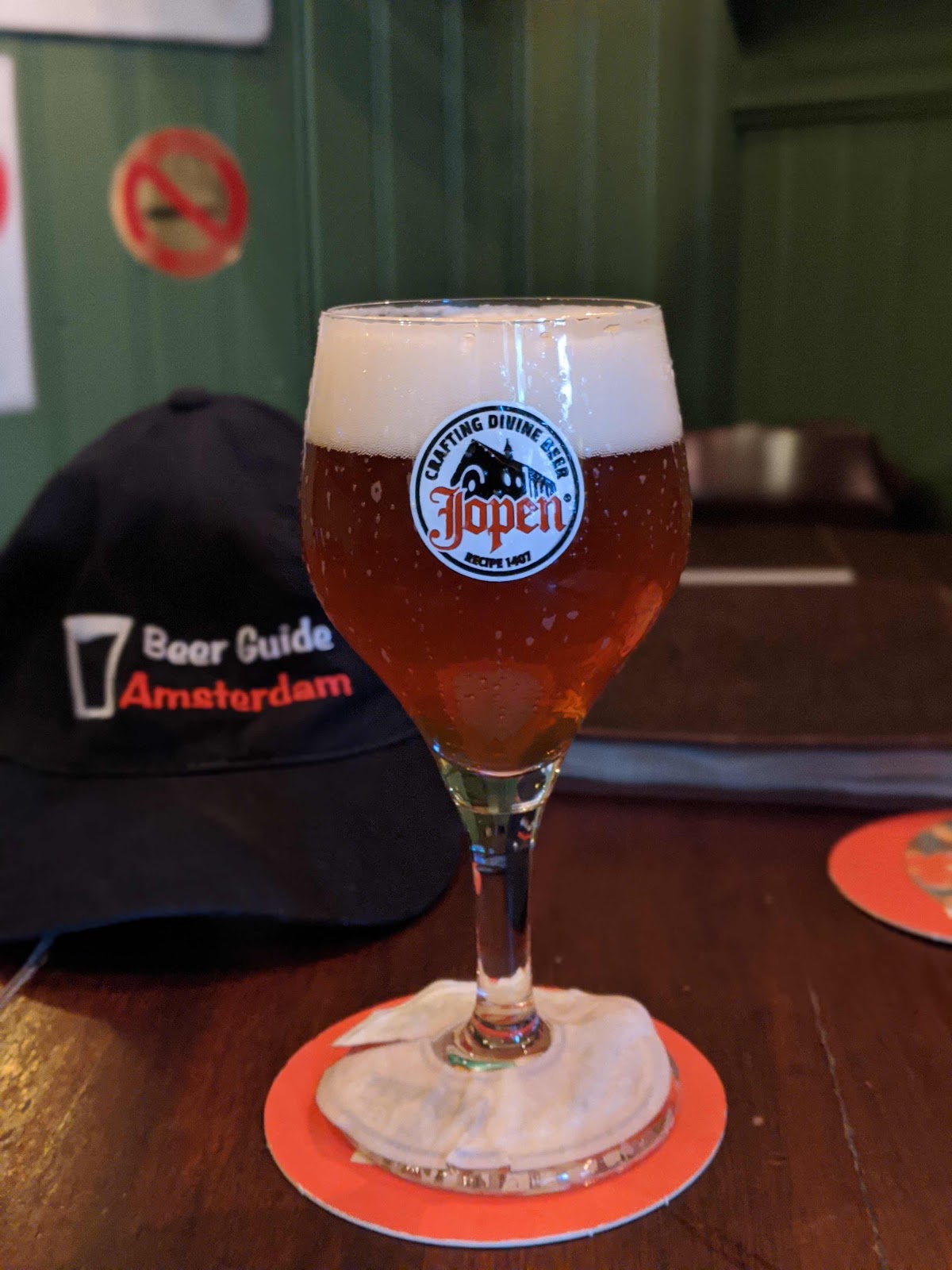 That had a beer from what is becoming my favorite new brewery, De Kromme Haring — a kveik Märzen named Lutefisk. Having once tasted Lutefisk and not being Scandinavian the name did not attract me, but the brewery did so I tried it. 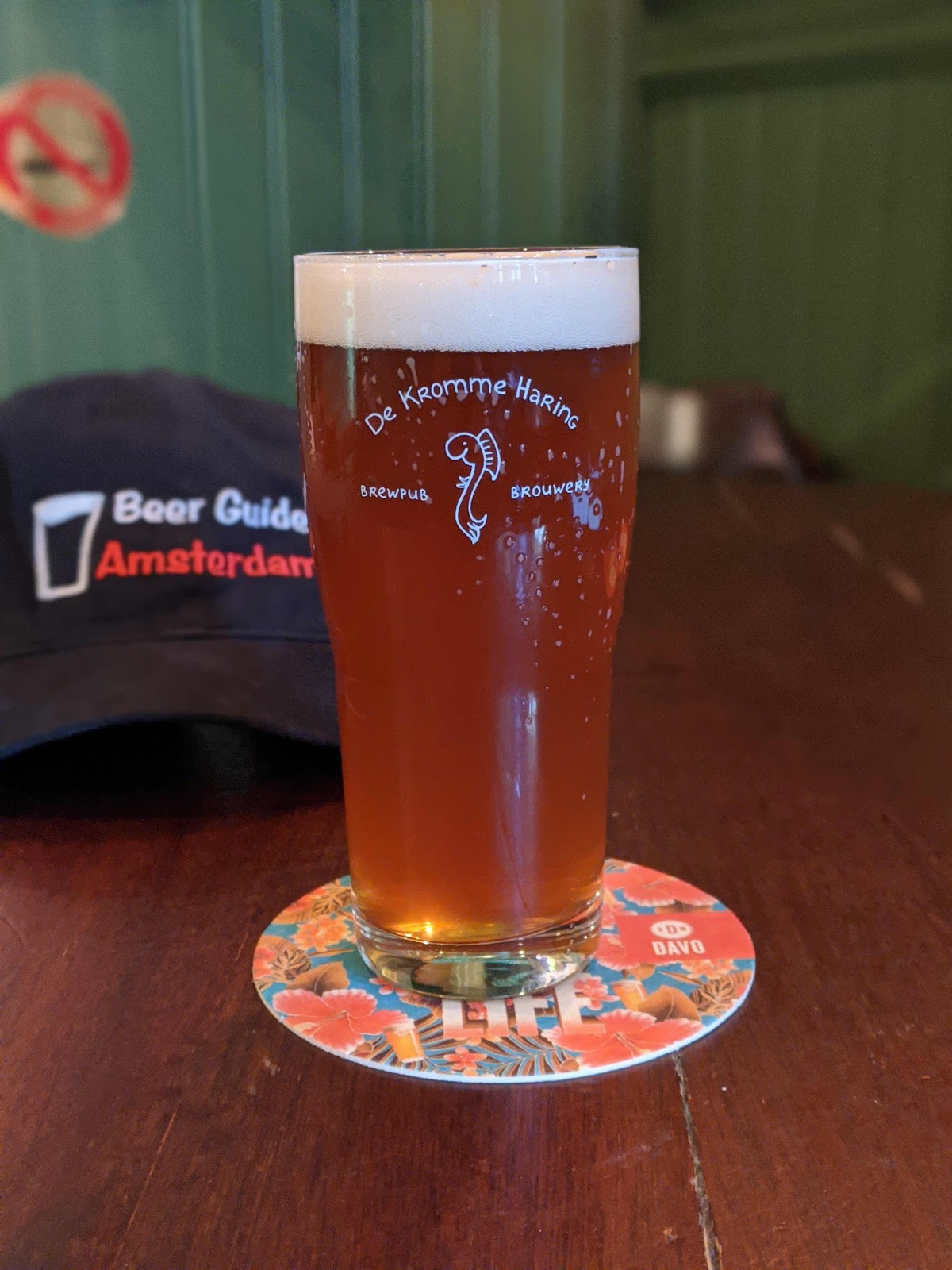 It was quite nice — a little bit “funky”  but just enough to make it interesting.
It was past lunchtime and they had a platter called a “Meat Ploughmans Lunch” — so I tried it and it was pretty good. The little pot had some sort of duck liver pate-ish thing — didn’t get the name. It was a bit strong in flavor but went well with the Lutefisk beer. 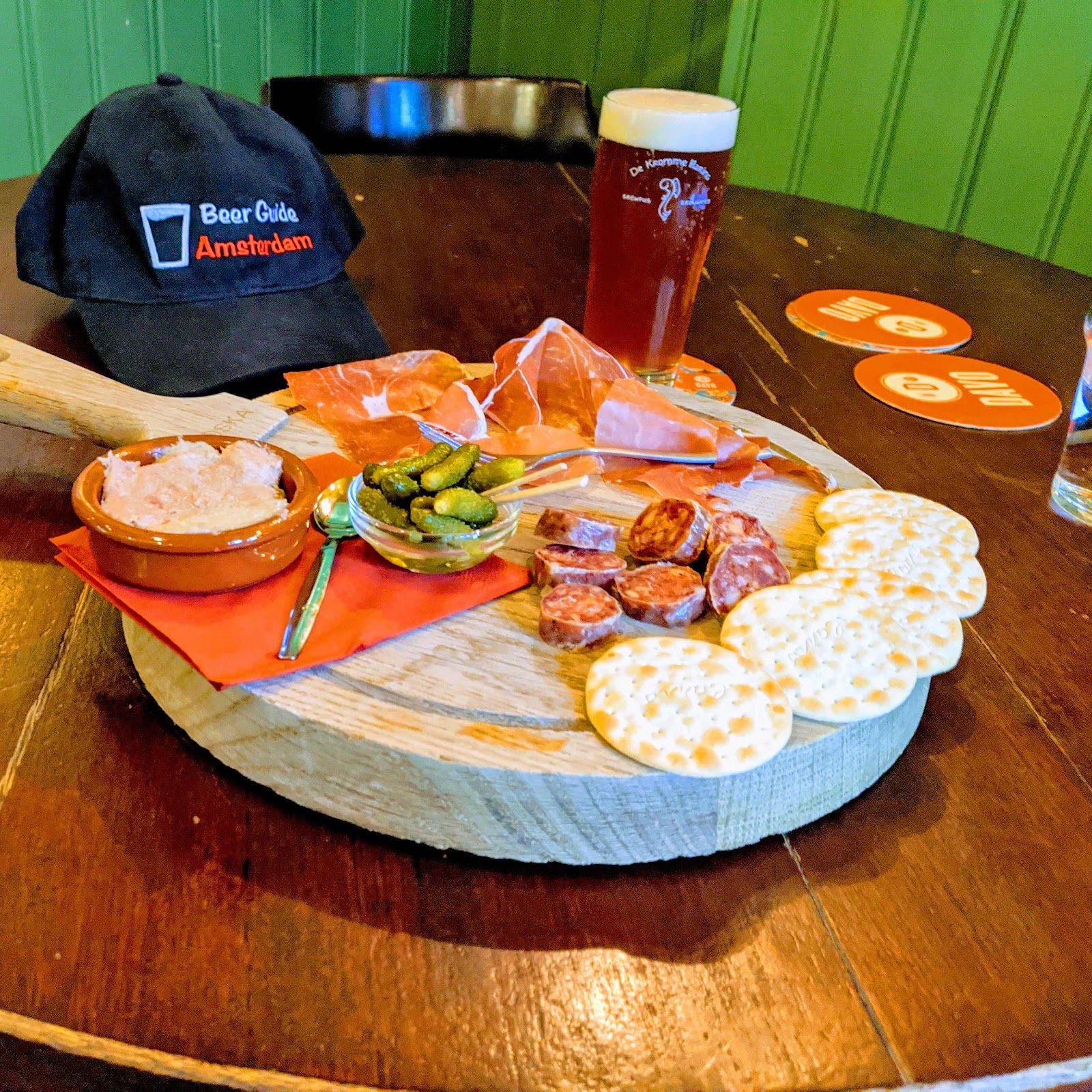 I usually try to drink Dutch beers when in Amsterdam but will have the occasional Belgian beer. Usually I am coming from or heading to Belgium when I am in Amsterdam so I try to limit those. But they had one of my favorite beers of all time on tap — the Oyster Stout from the Porterhouse Brewing Co in Dublin. I could not pass that up. 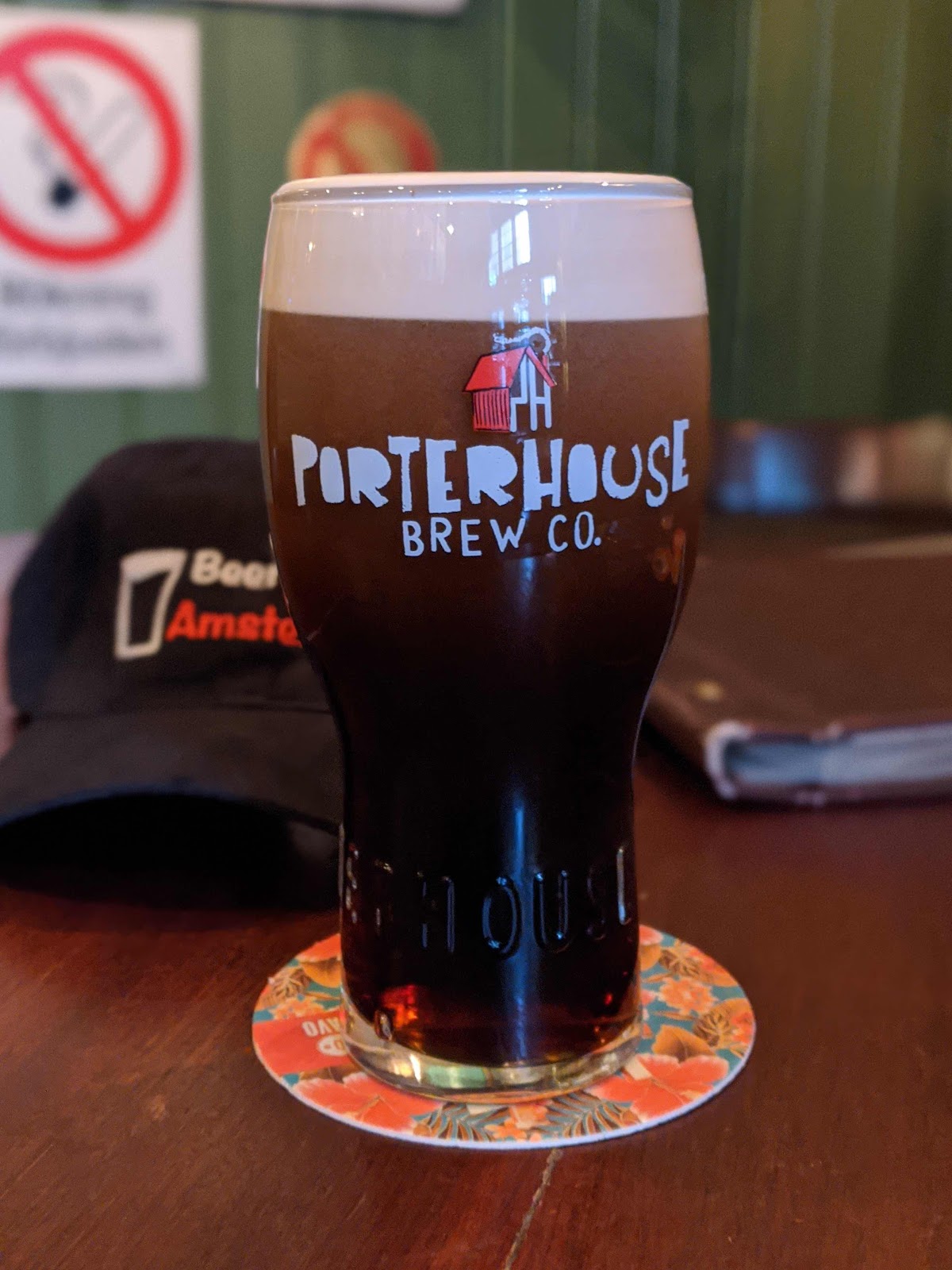 It actually was almost too pretty to drink. Almost. It has been a couple of years since I’ve been to Dublin (heading there in late January) so it was good to have. 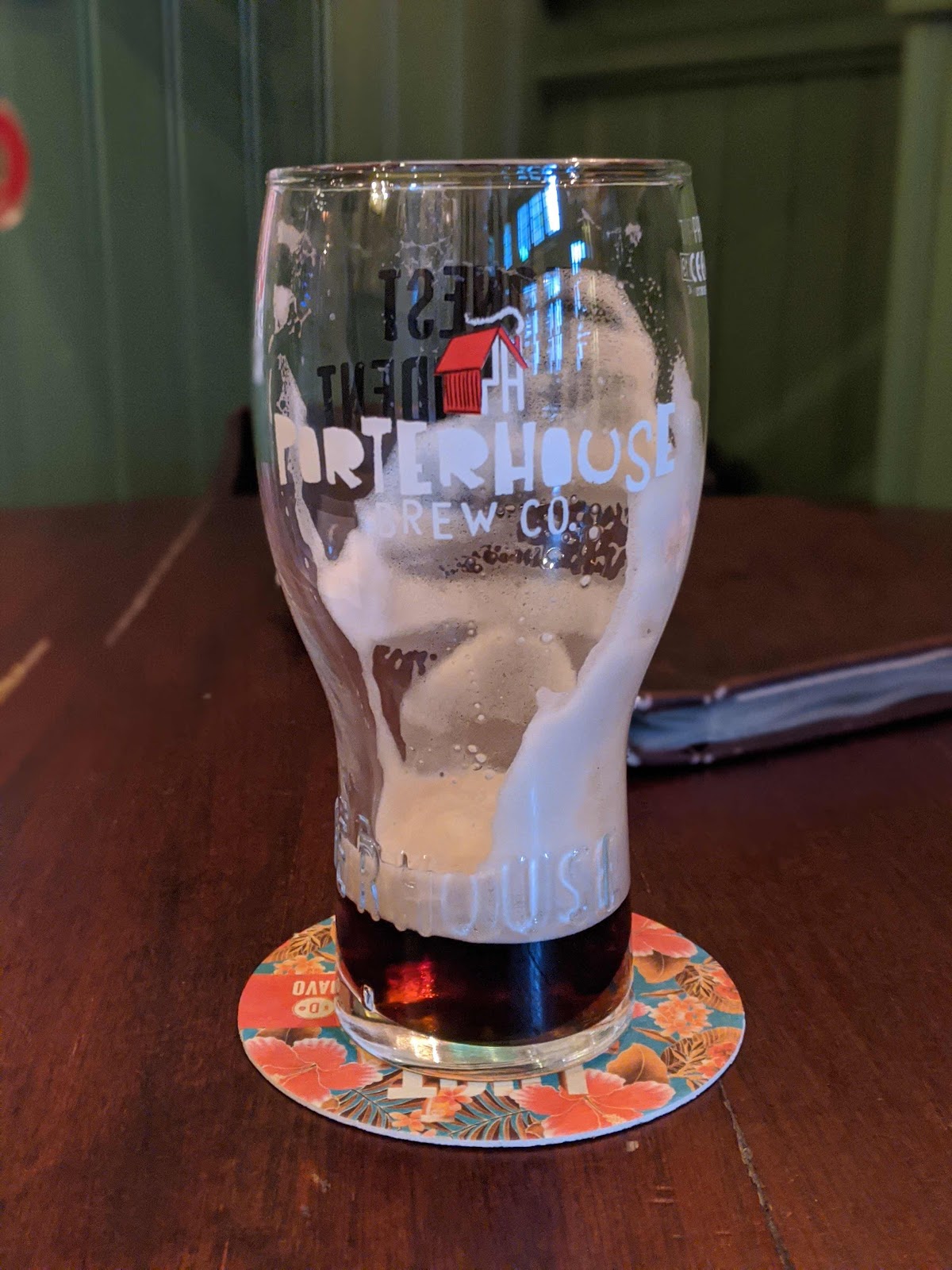 Even as a nearly dead soldier it was still pretty.  One thing I like to point out — they keep their Trappist and Abbey beers at room temperature. It was a bit chilly inside but still way warmer than a typical bottle fridge. I hate having to warm up a beer before drinking. 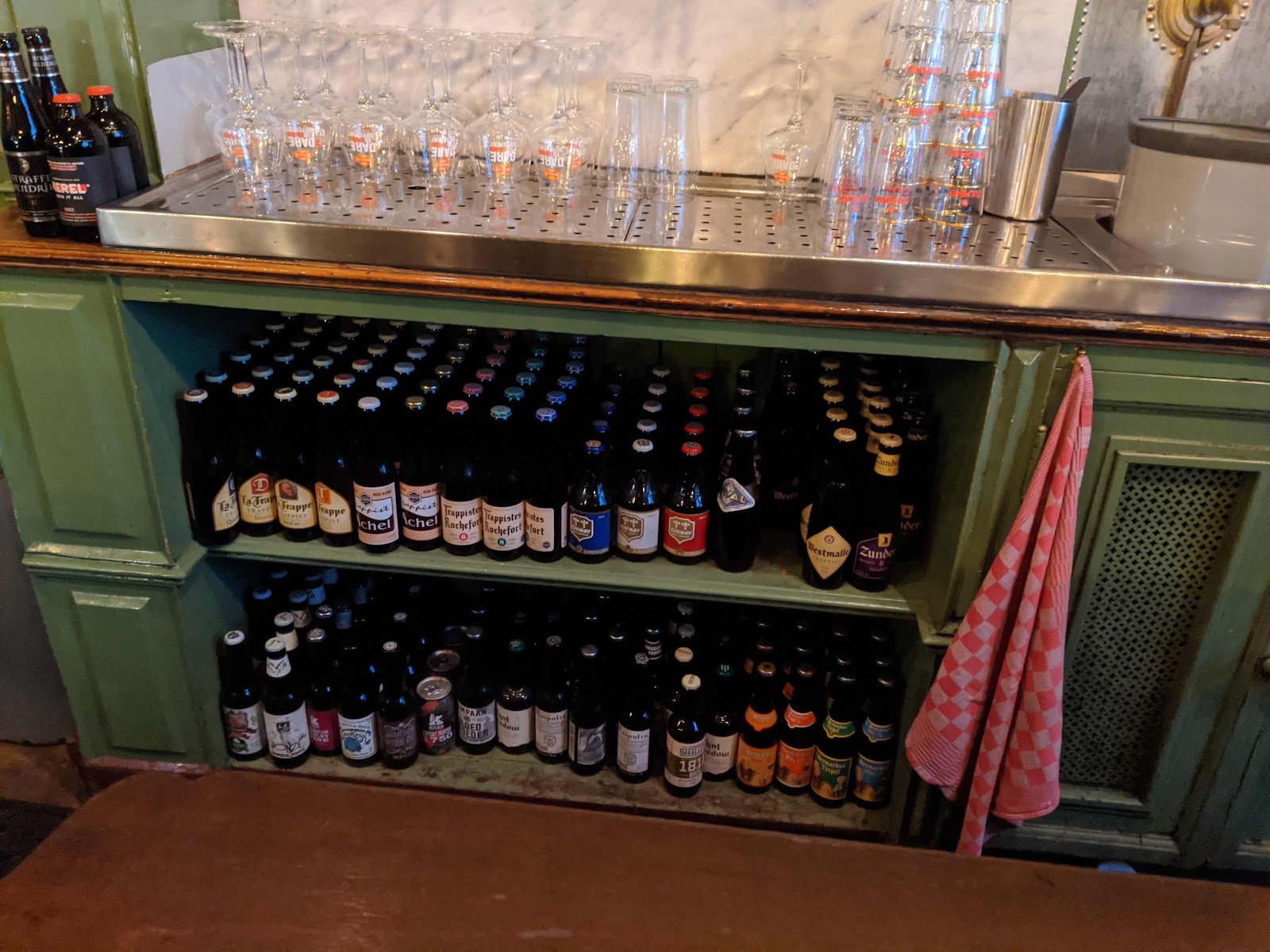 My next stop was a new tap room for the Butcher’s Tears brewery — called the Tears Bar. Their website said they were open at 3pm and I arrived there about 5 minutes early to find it totally deserted. No way was it going to be open at 3pm. 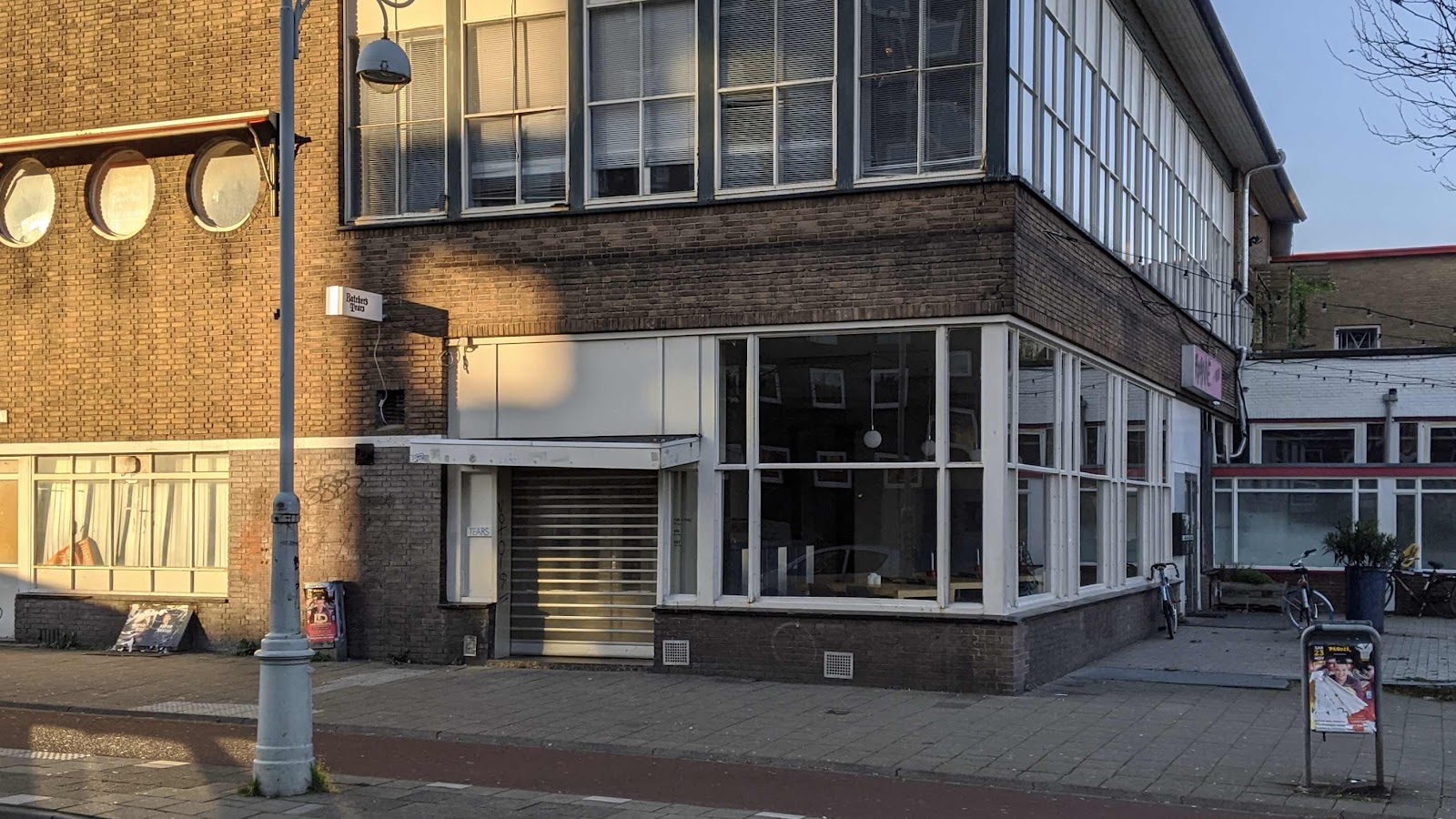 A look at the front door and their actual hours were 5pm. No way was I waiting around for two hours. The next nearest place didn’t open until 4pm so that was too long as well. 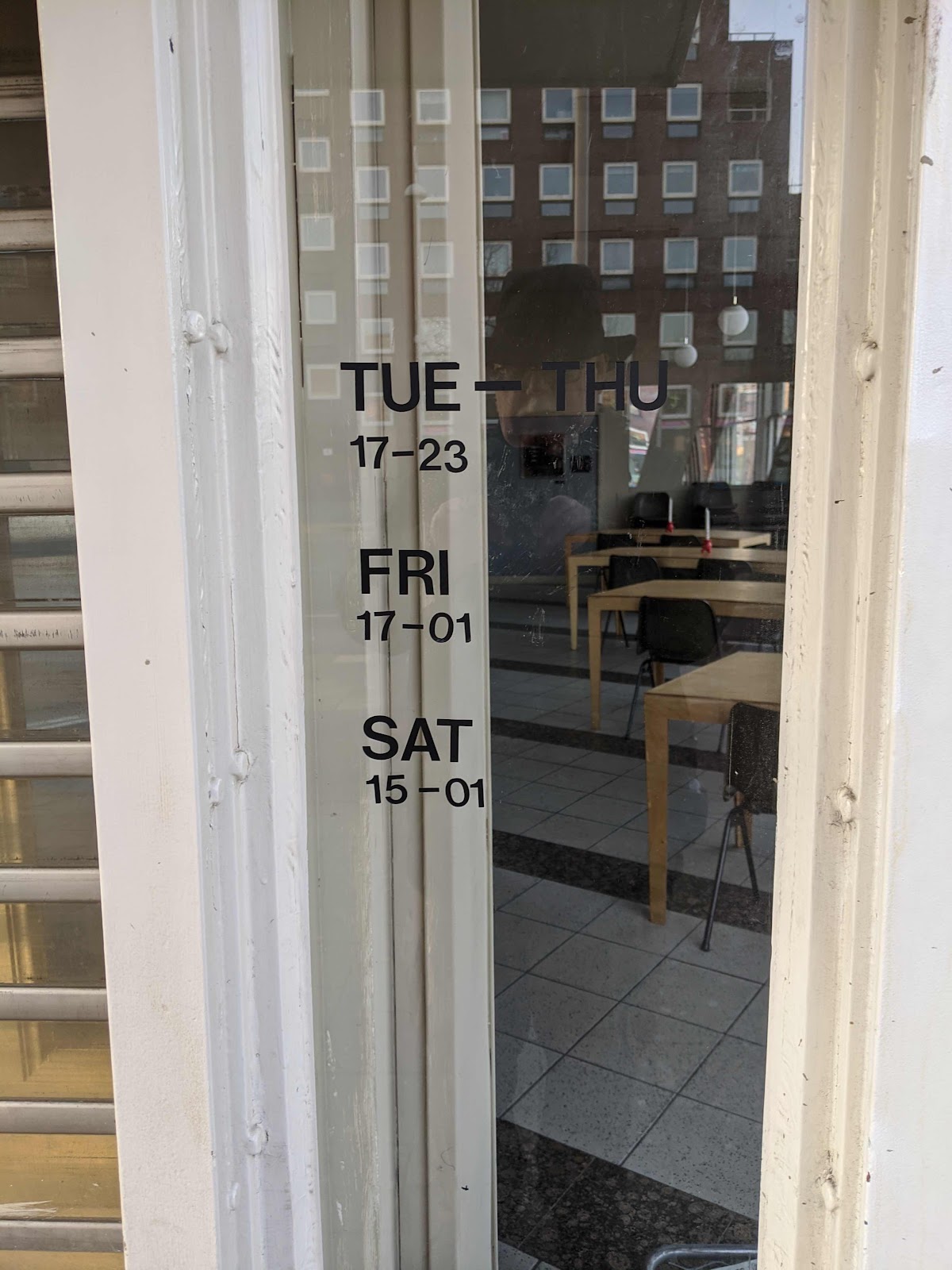 I checked my transit app and there was a good connection to one of my favorite places, Bar Joost. Literally on the other side of town but an easy bus ride. 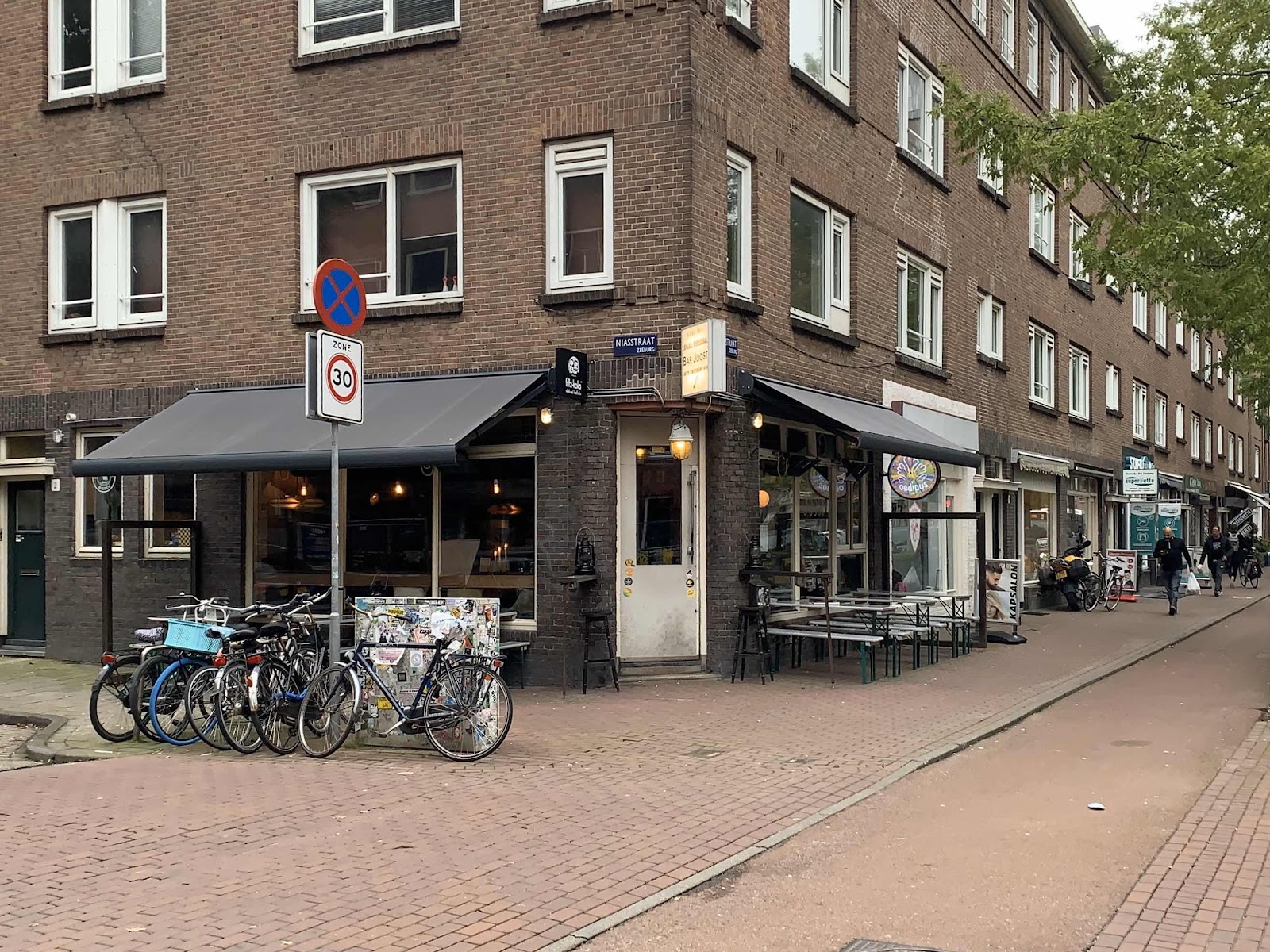 They don’t have a huge tap list but it is well selected and local breweries well represented. Also a great bottle list. 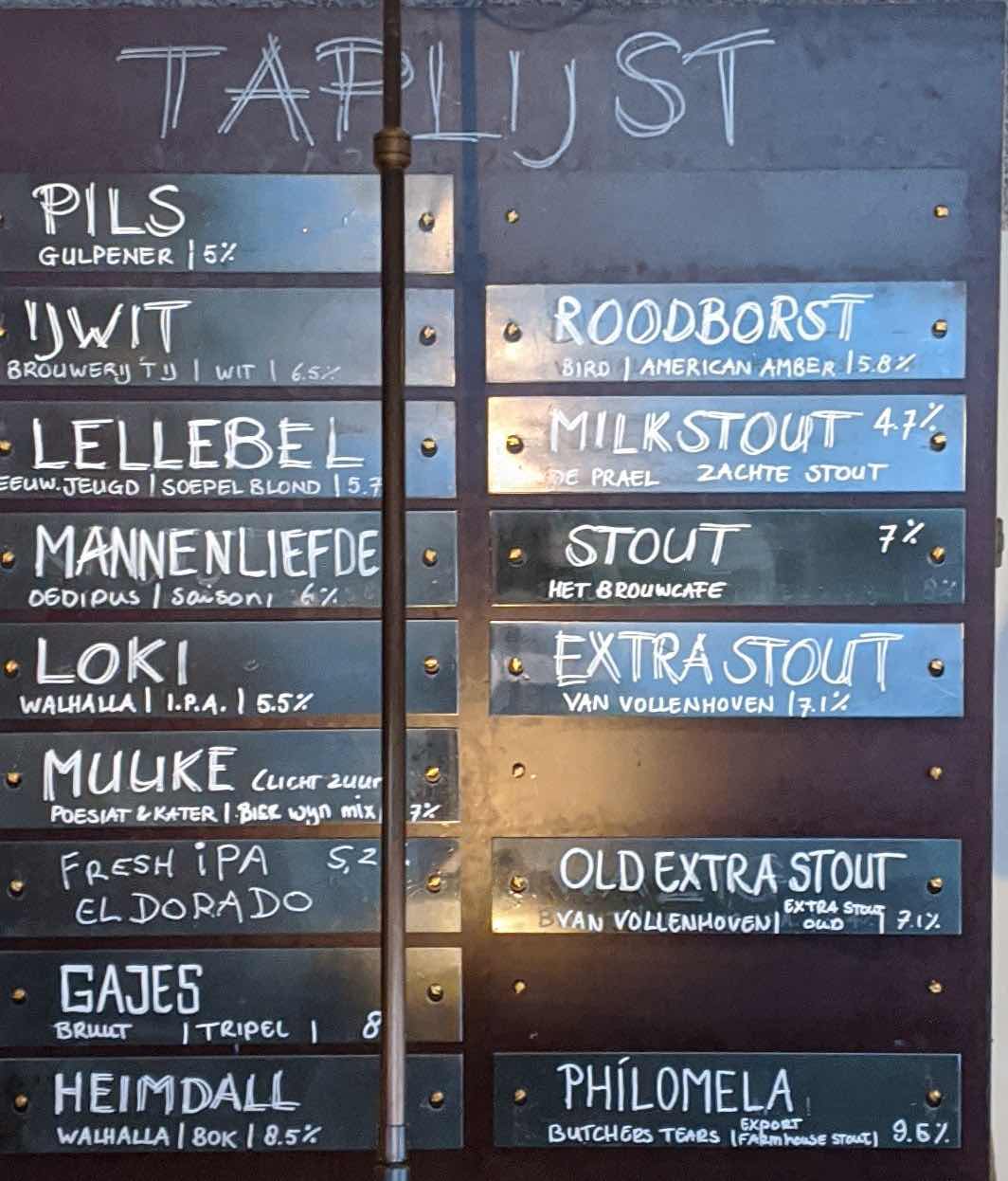 A number of the beers I’d had when I was here in October were still on, so I went for something new (to me), the Milk Stout from De Prael 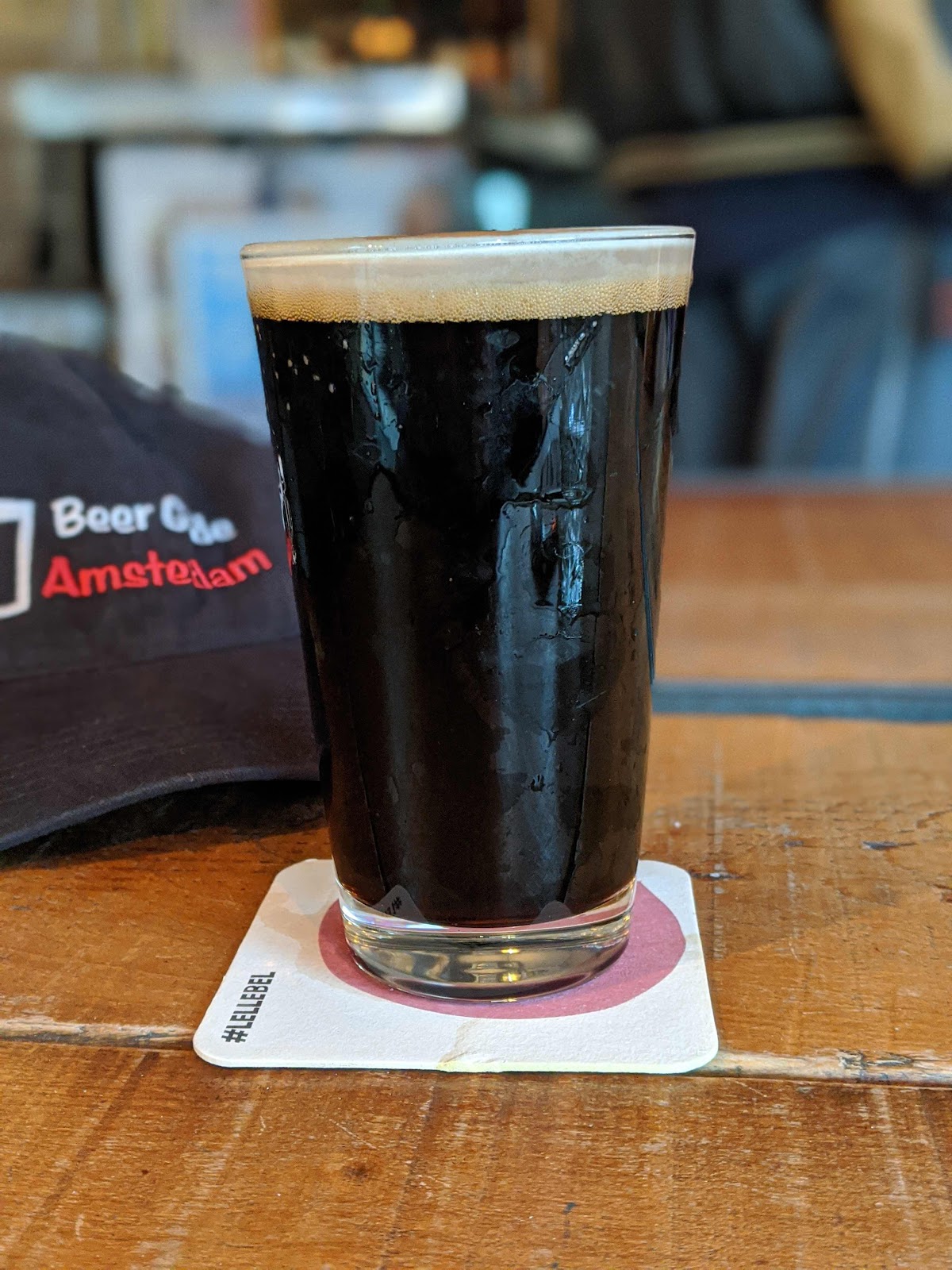 As the board said, it was sweet but not overwhelmingly so. But one was enough.
The young man behind the bar suggested the Muuke from Poesiat & Kater (which is nearby) and offered me a taste. It is a blend of beer and wine but the barman didn’t know anything about the wine (white wine, of course) 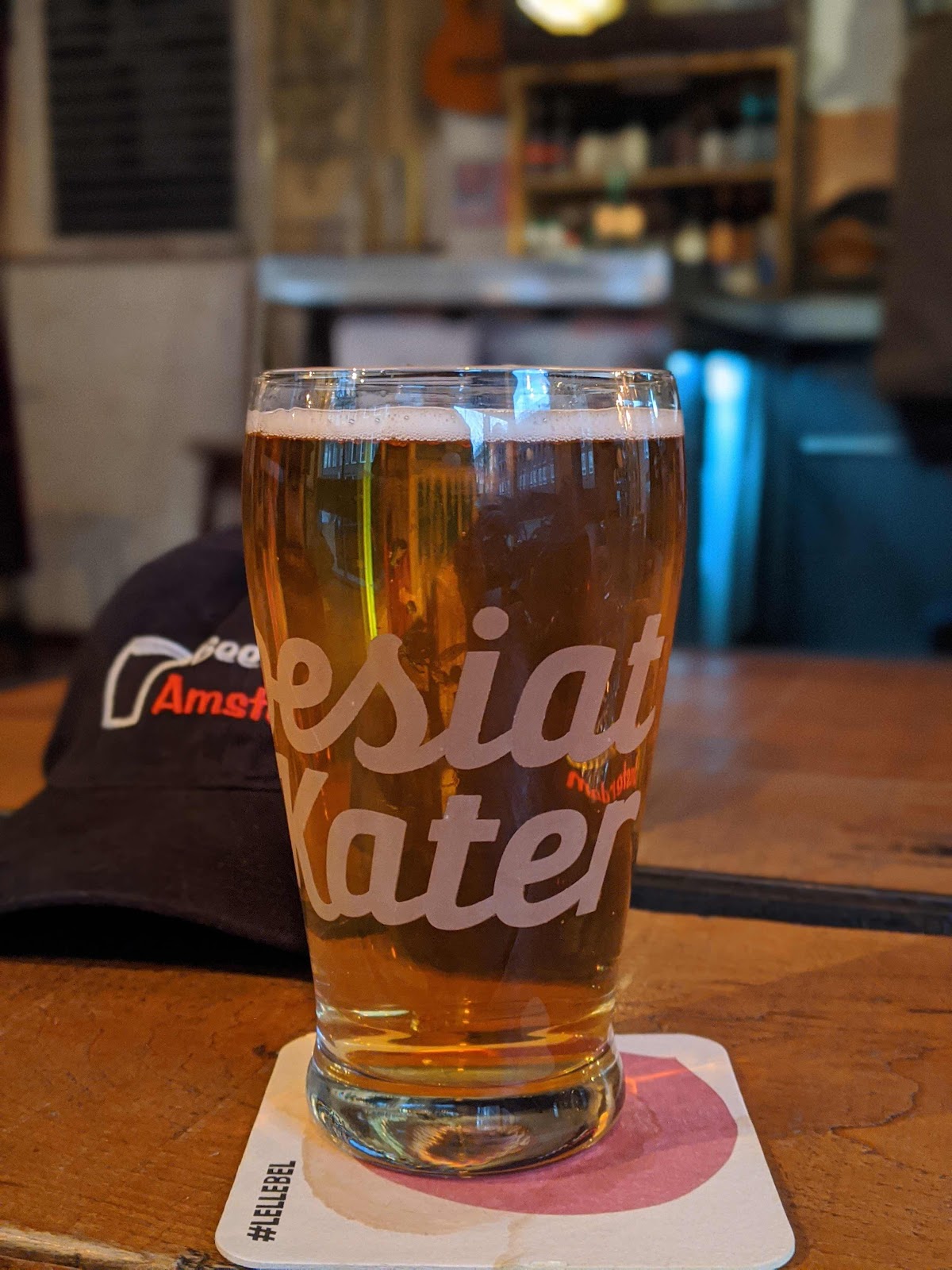 As the board said, it was slightly sour and fairly enjoyable. One of those beers I was glad to have tasted but don’t feed a need to have another one soon.
By this time they had updated the beer board and added some new choices. 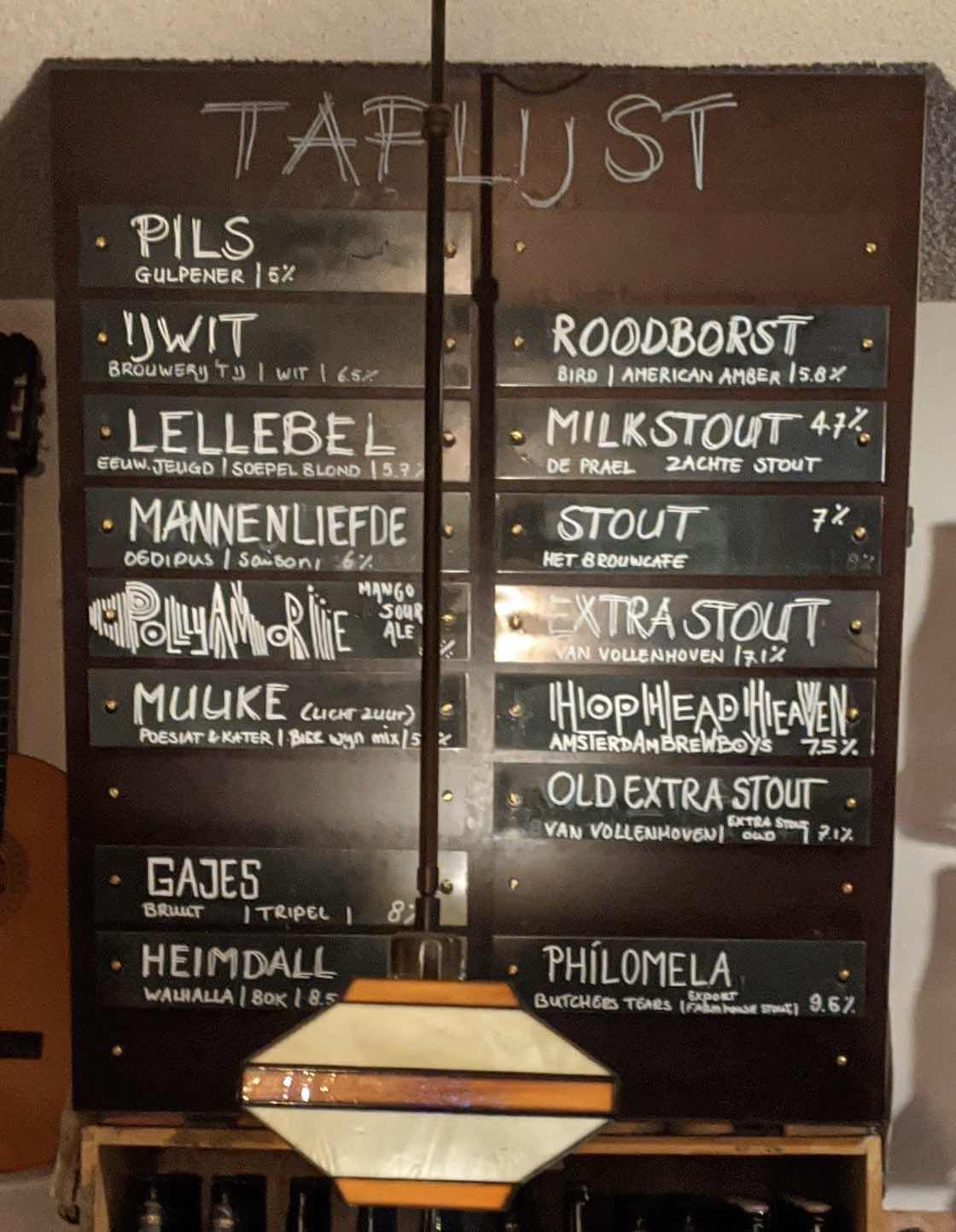 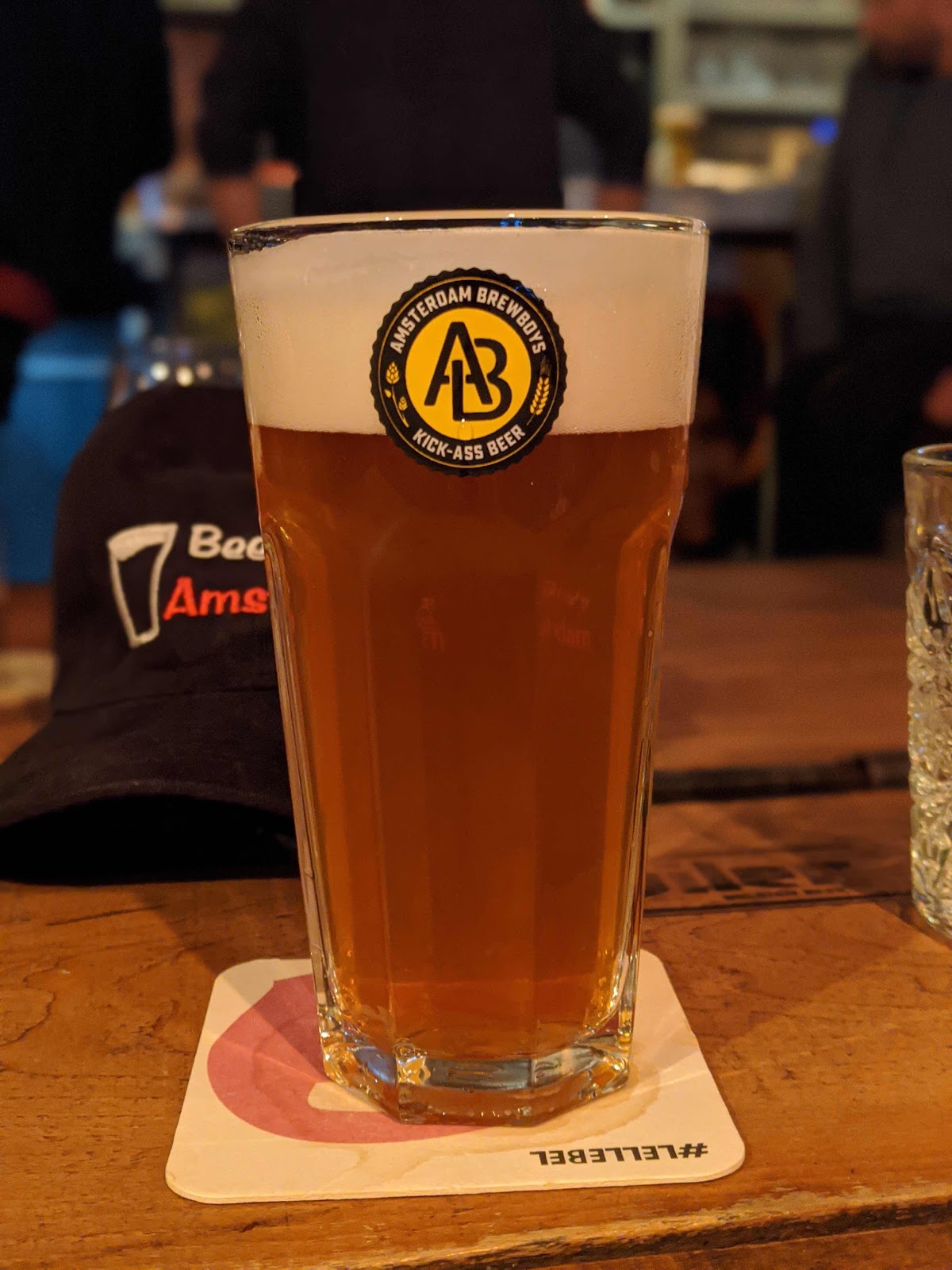 It was hoppy and could have been brewed in California — which I guess is saying they hit their mark. But I wasn’t that homesick yet :)
I really like the Van Vollenhoven Extra Stout (brewed by Poesiat & Kater) so I thought I’d try the Old Extra Stout — as I was feeling extra old these days it seemed apt. It was good. Slightly sour — just a tad really — gave it that “old” feeling.  Plus it makes a pretty picture.
I really probably should have left after that, but the Philomela from Butcher’s Tears sounded interesting so I had one. 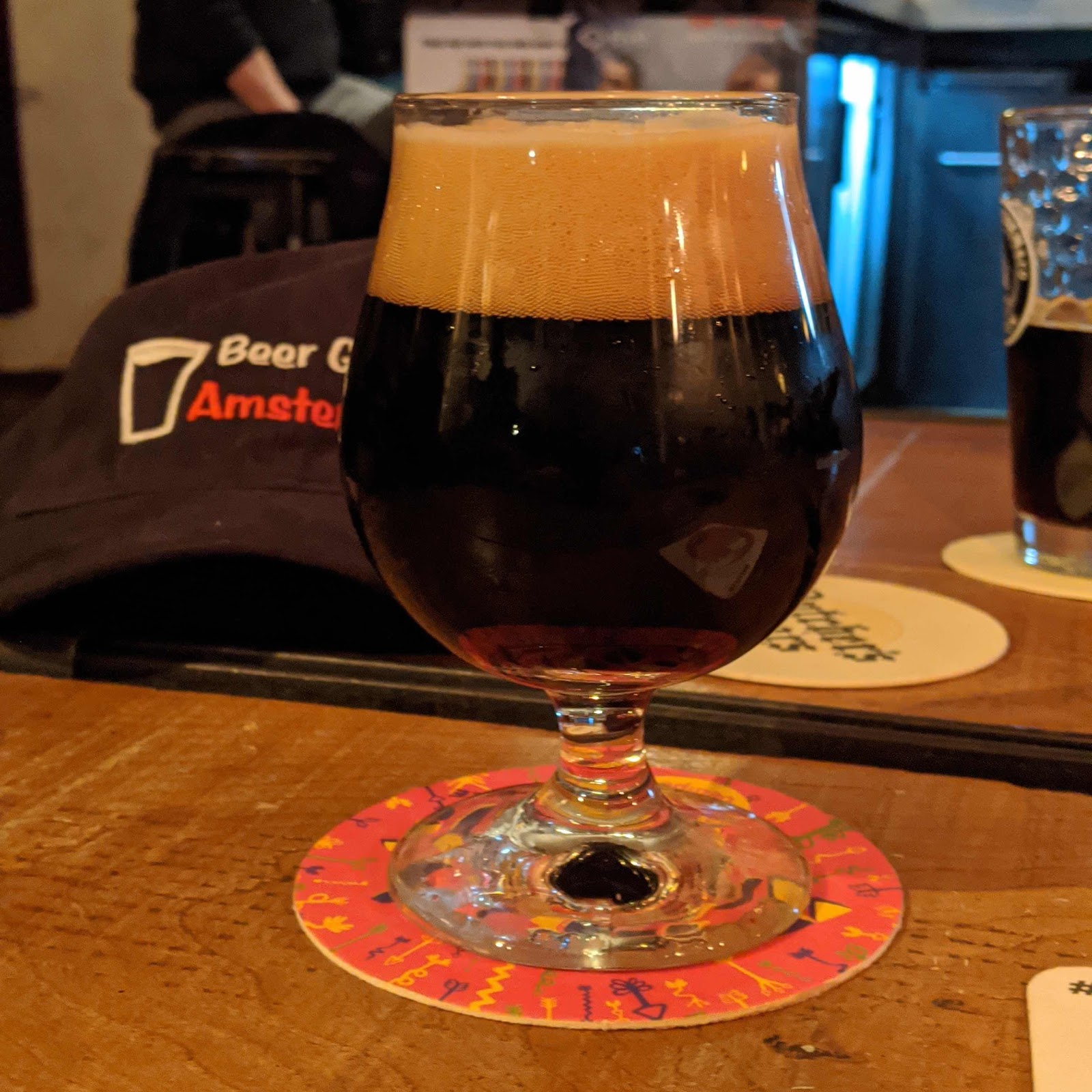 The description said “Farmhouse Export Stout” and from the farm reference, it too was a tad sour and very enjoyable. Drank a lot easier than 9.6%, which is dangerous.
Sometime earlier I had ordered a Ham and Cheese Toasty. There was only one person working the bar and the place got busy and he was busy pouring beers (I have no argument with that priority) and he finally made my toasty just as I was finishing my beer.  It did hit the spot, though. 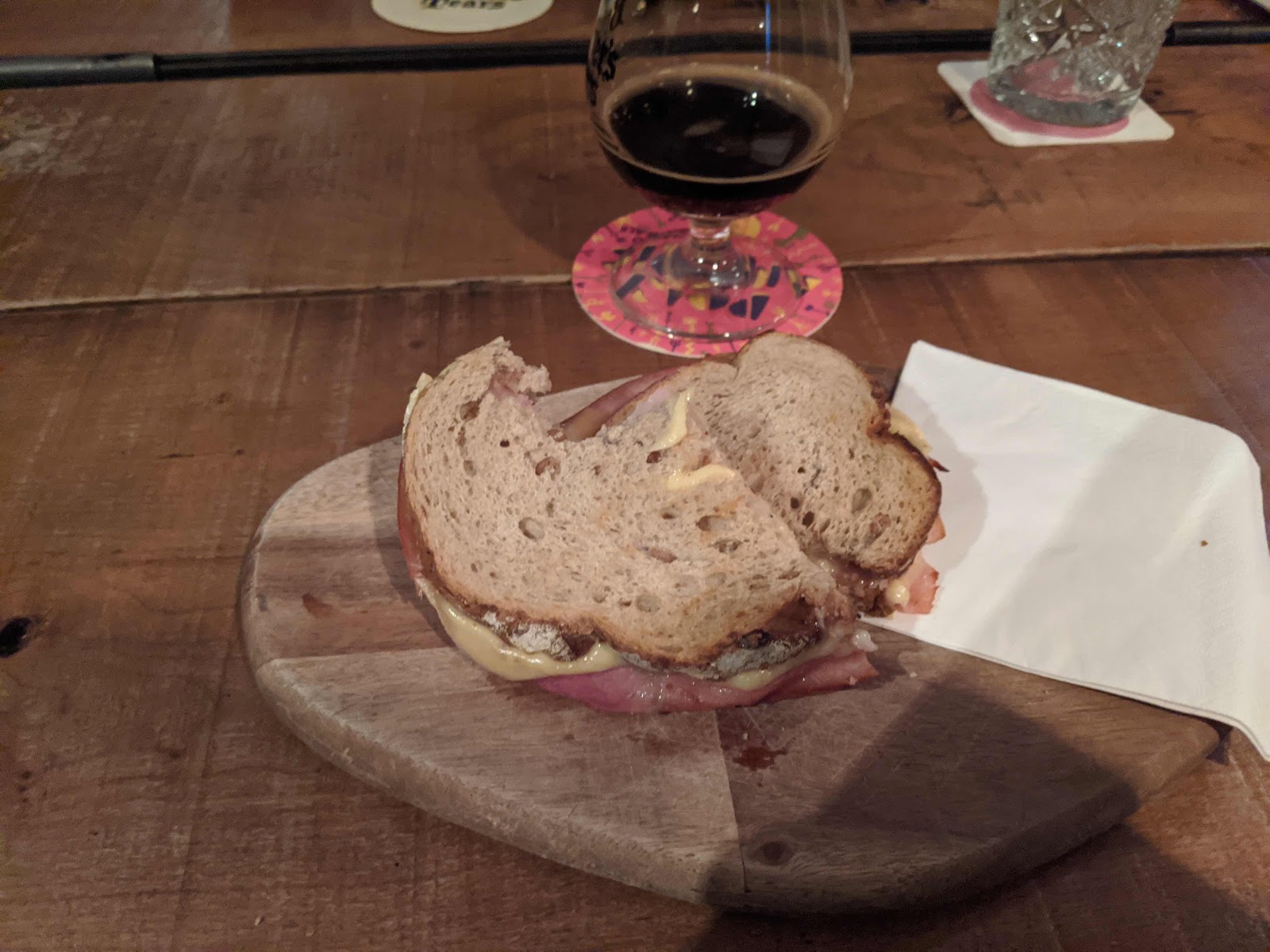 Originally I was going to pop into Bar Joost for a beer or two and four hours later I headed out for my hotel. If jet lag hadn’t started to kick in, I probably would have had another beer or two. It is that kind of place, which is why I love it and why you should seek it out next time you are in Amsterdam.
Posted by The Mad Brewer at 2:10 AM