For a change, I decided to take the non-stop LAX-AMS flight on KLM, rather than taking my usual Delta and changing somewhere. The first sign that it was going to be a long day was when I found out that KLM doesn’t recognize my TSA PreCheck. I knew things were going to take longer as the Bradley International Terminal doesn’t have CLEAR — the paid service that makes traveling almost like pre 9/11 days. So I waited in the line with people who travel once a year and are unclear on the whole TSA thing. Whine, whine, whine (or whinge, whinge, whinge as some of you say)
KLM uses the Korean Airlines lounge and when I was last there a few years ago it wasn’t anything special. No decent beer at all (but a great terrace that looks out over the terminal). I’d heard of great food offerings at the Bradley so I went in search but on the wing were my flight left were pretty much only high end stores (Rodeo Drive/Königsalle level, if you know what I mean). I finally found a wine bar that had some bottles so I had an Anderson Valley Hop Ottin’ IPA — an old favorite that I hadn’t had in a while. 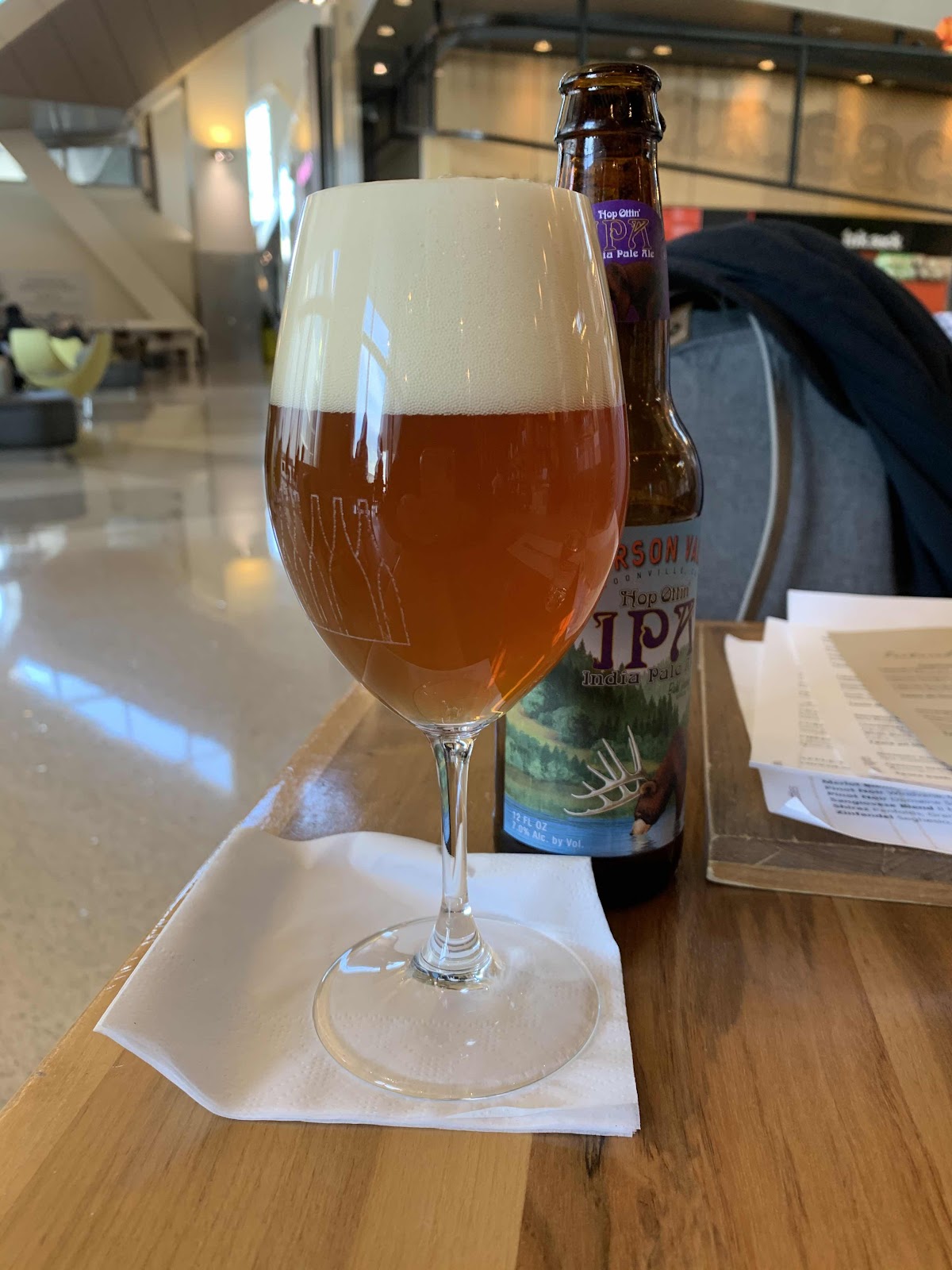 Along with that I had an overpriced (even for airport standards) sandwich— though it was very good, just small and pricey.
My section of the flight was absolutely packed. There was one open seat that the purser offered to the nice lady in the middle seat next to me, so at least I had an empty seat next to me (a/k/a poor man’s business class). We had a stiff tail wind which made for a quick, but bumpy flight. On Delta (and most US airlines I’m told) they turn on the Fasten Seat Belts sign for the most trivial reasons — and leave it on for an hour. KLM is different — I’ve often thought that KLM pilots are docked pay for every minute the Fasten Seat Belts sign is on — they almost never turn it on. Flight attendants are weaving down the aisle like I do after all day at Spezial but the sign is off.  On this flight, they turned it on many times, it was that bumpy. I don’t sleep well sitting up but I got less rest than usual. Even though we left 40 minutes late we arrive 15 minutes early.
When I flew to Amsterdam it October, the arrival was a mess — hour long wait to go through passport control, hour long wait for my bags, etc. etc. This time everything went fine — 15 minute wait for passport control and a 5 minute wait for my bag. I topped up my OV Chipkaart (you have to have a minimum of €20 to take a train), waiting 10 minutes for a train and was soon at my hotel. Of course it was too early to check in but they side my room would be ready in 20 minutes, so I had a coffee, got caught up on email. And was soon in my room. The first place I wanted to visit wasn’t open yet, so I though I’d just rest my eyes for a minute— yeah right.
When I roused, I fussed again with the hotel WiFi — my room is in a bit of a blind spot, They offered to move be to another room in the morning, but I’d already pretty much unpacked so I decided to live with it.
I headed out to Foeders but along the way I realized I hadn’t eaten in a while so I stopped at an Italian restaurant and had a very nice late lunch. They only beer they had on tap was Peroni and I didn’t want that to be my first beer in Amsterdam so I had a bottle of water instead. 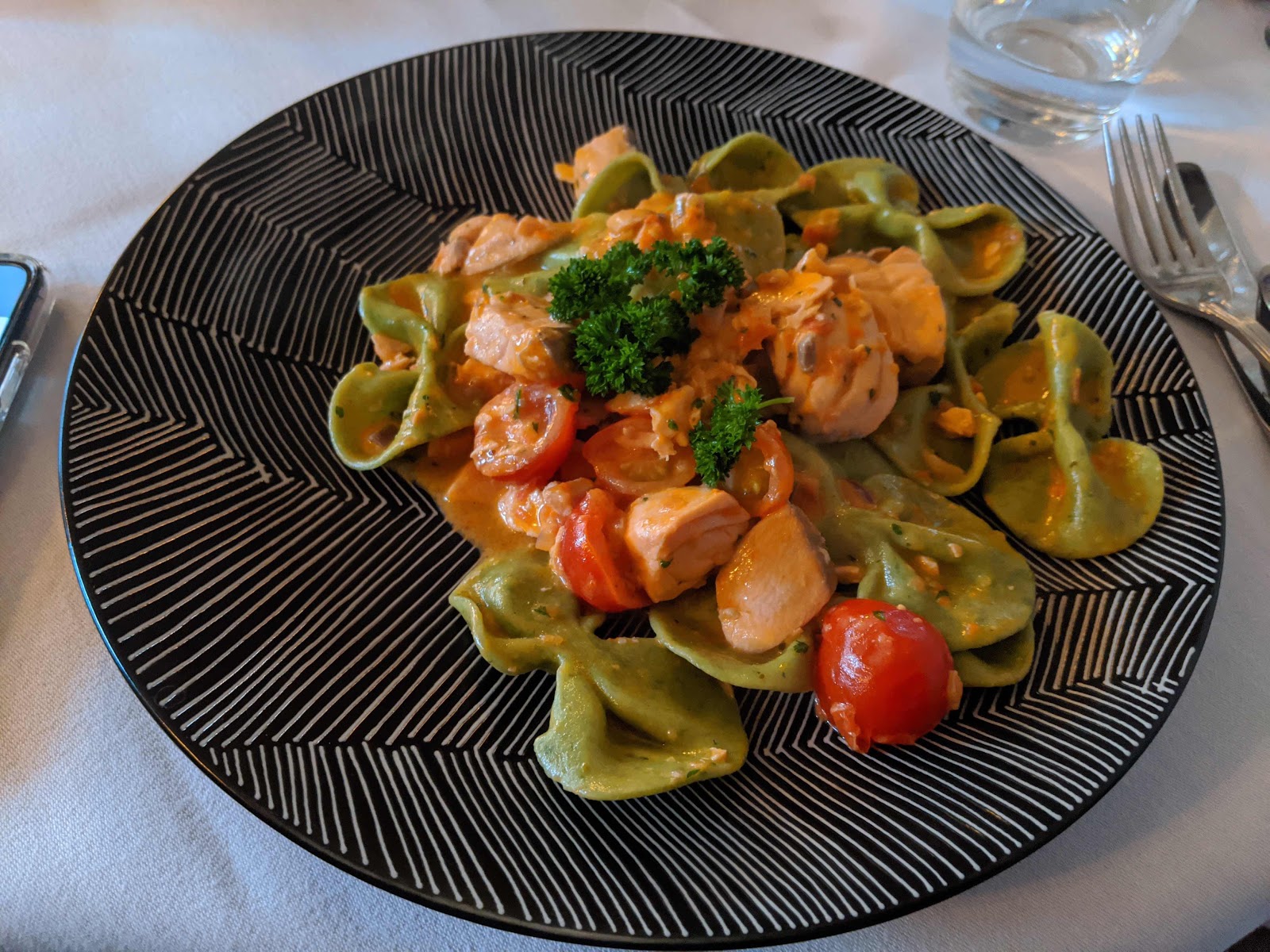 The lunch special included the main course, dessert and coffee and was cheaper than my beer and small sandwich at LAX.
Around the corner is Foeders. 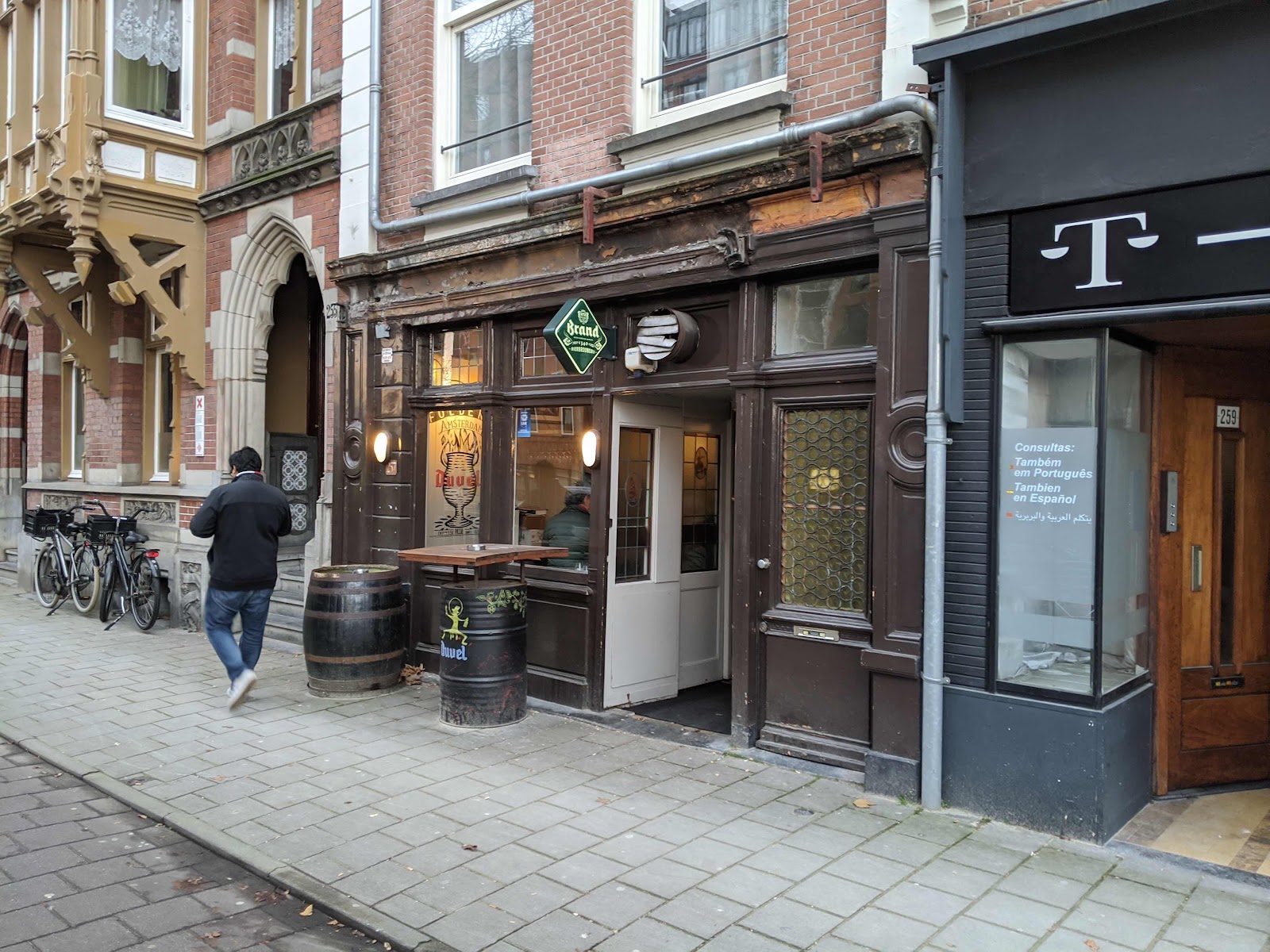 If you haven’t been, you should go next time you are in Amsterdam. It is a great place.  One complaint, though is it is hard to get a picture of the tap list. It is right across from the bar and is spread across a fairly large wall so it takes multiple pictures from bad angles. But I can live with it. 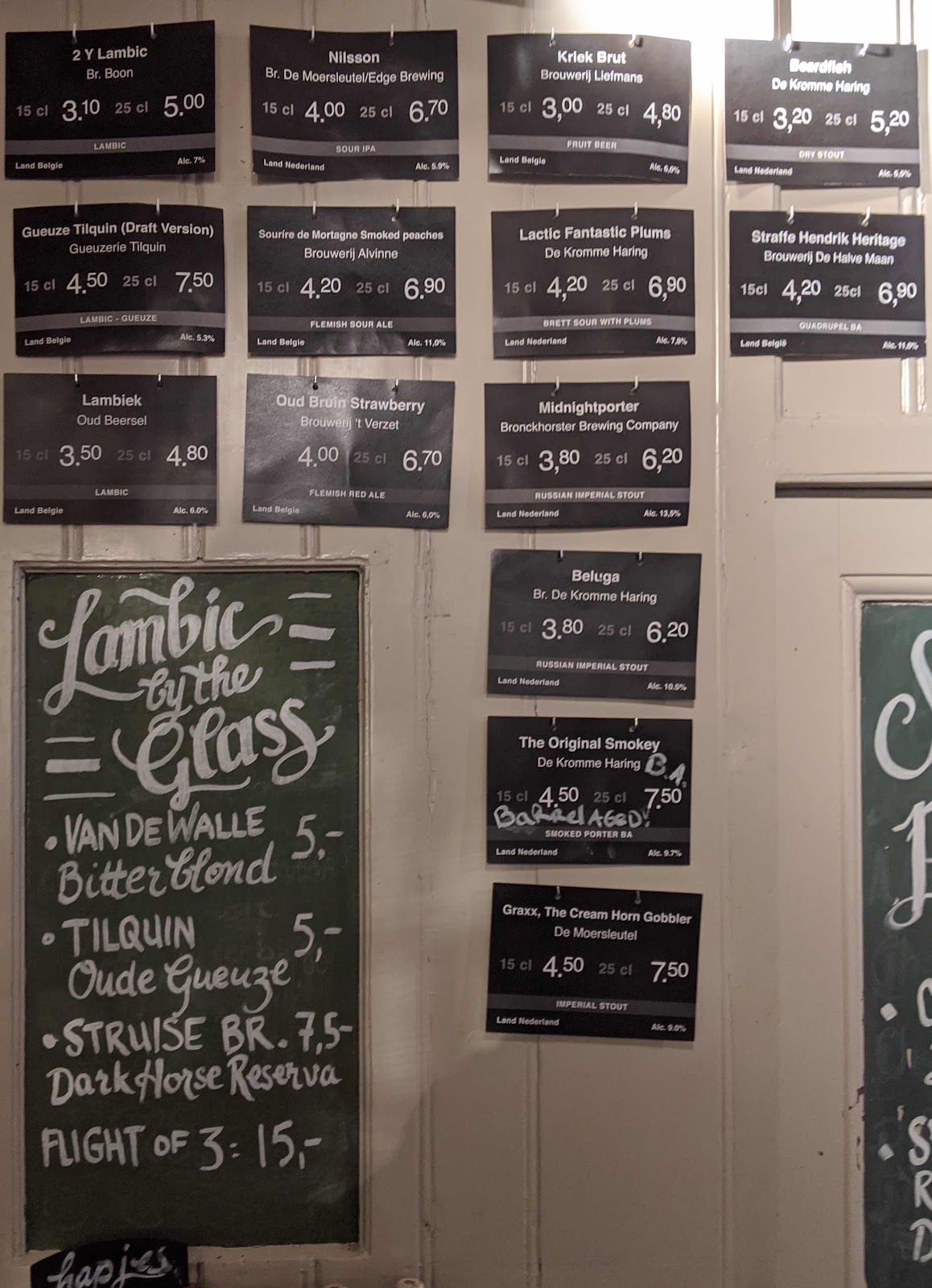 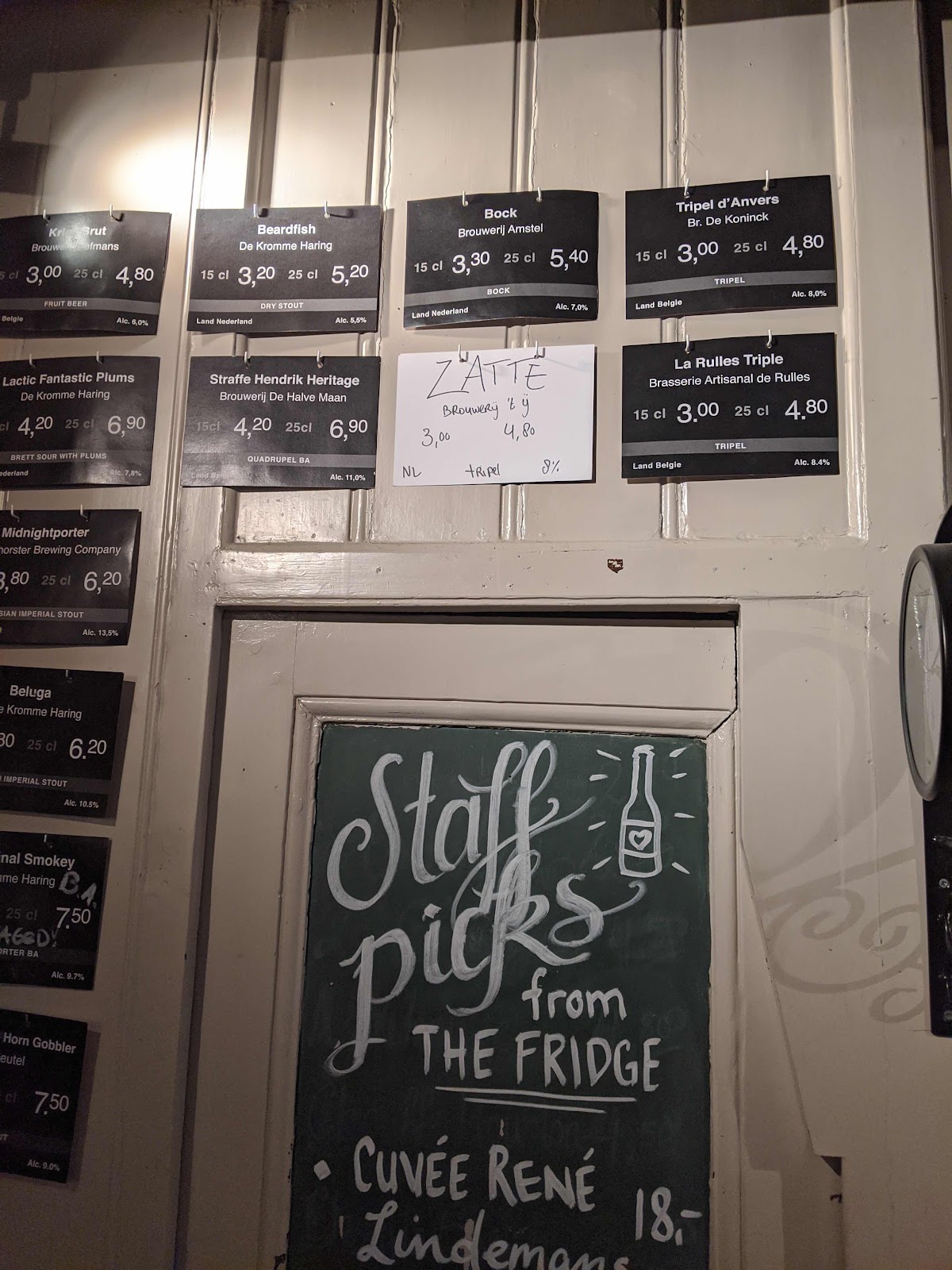 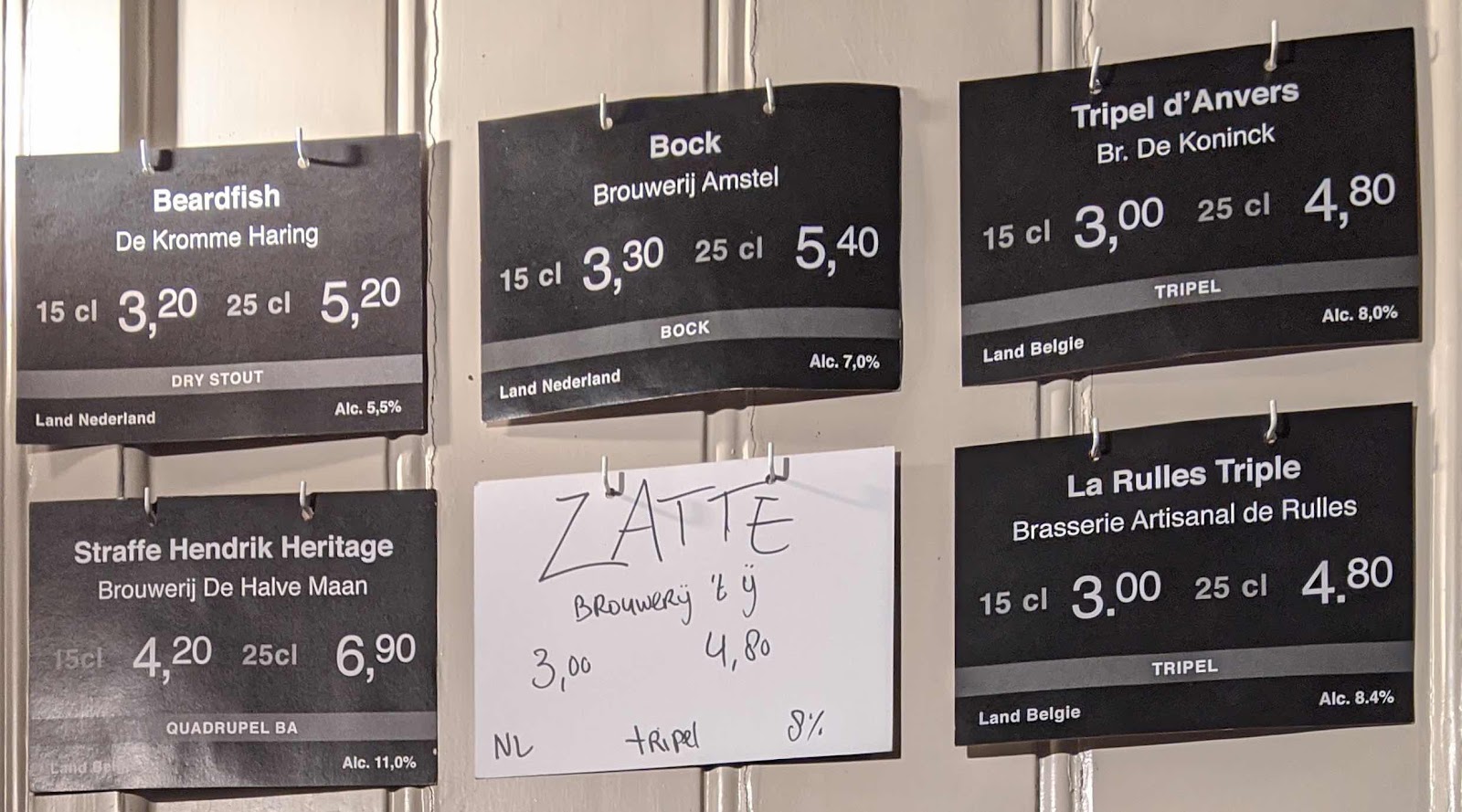 A note — I show the tap lists to let people know what sort of beers are available that day. The above started a bit of discussion on twitter about the prices. Please don’t. Yes, you probably can find a particular beer somewhere else cheaper. That is not the point. The one time I had Mönchsambacher Lager on tap in the US it was like $9 for a half liter. I didn’t say “What a rip, I paid €1.90 when I was at the brewery” (since gone up). I said “Another one, please.”
So I started out with the De Kromme Haring Beadfish Stout. I have been really impressed with this Utrecht brewery — every beer I’ve had has been good and this was no exception. 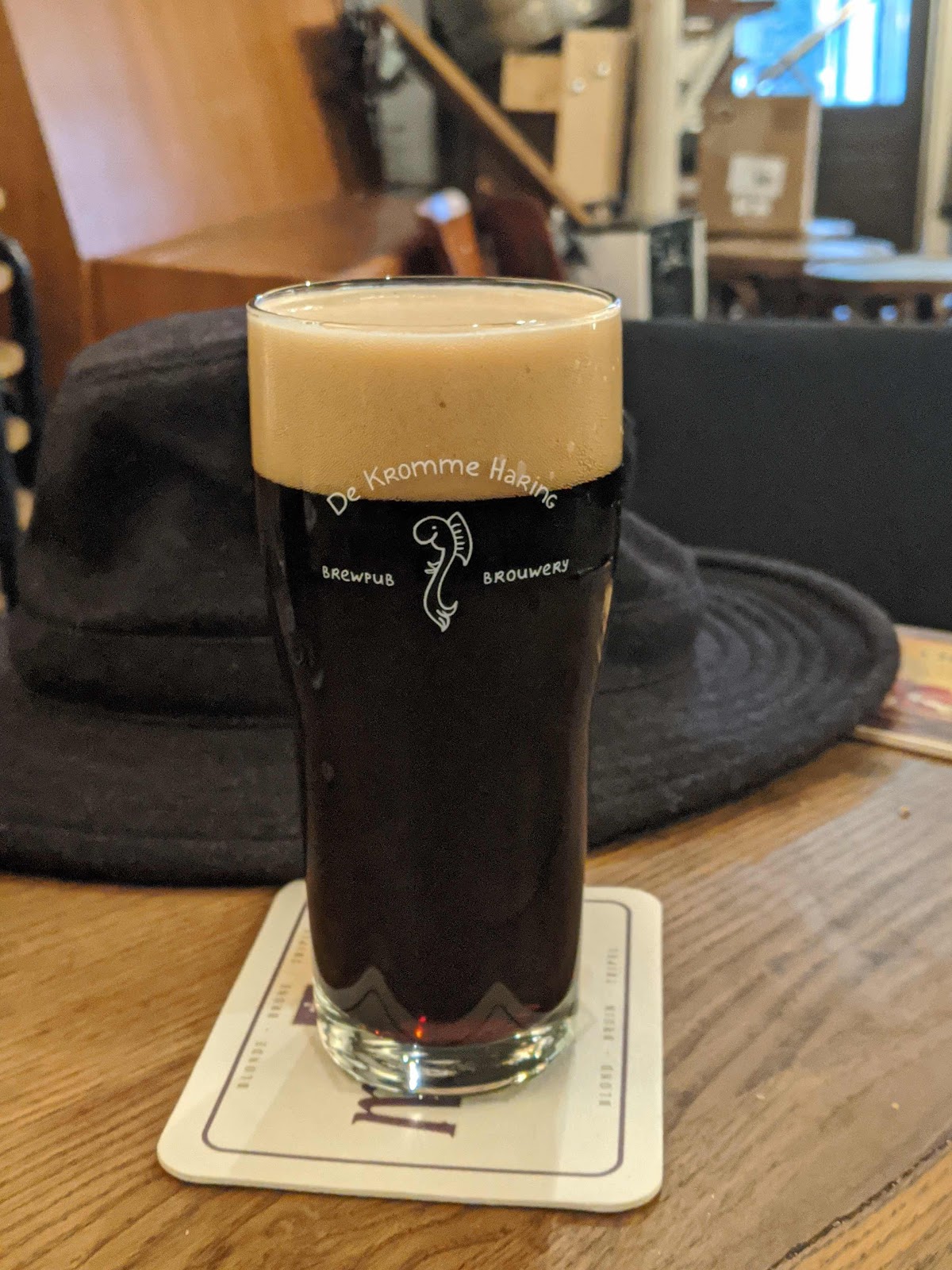 Next up was Het Uiltje Bird of Prey IPA, a beer I’ve had before and like, and this one was good as well. A nice IPA but something extra that made sure you knew it wasn’t from California. 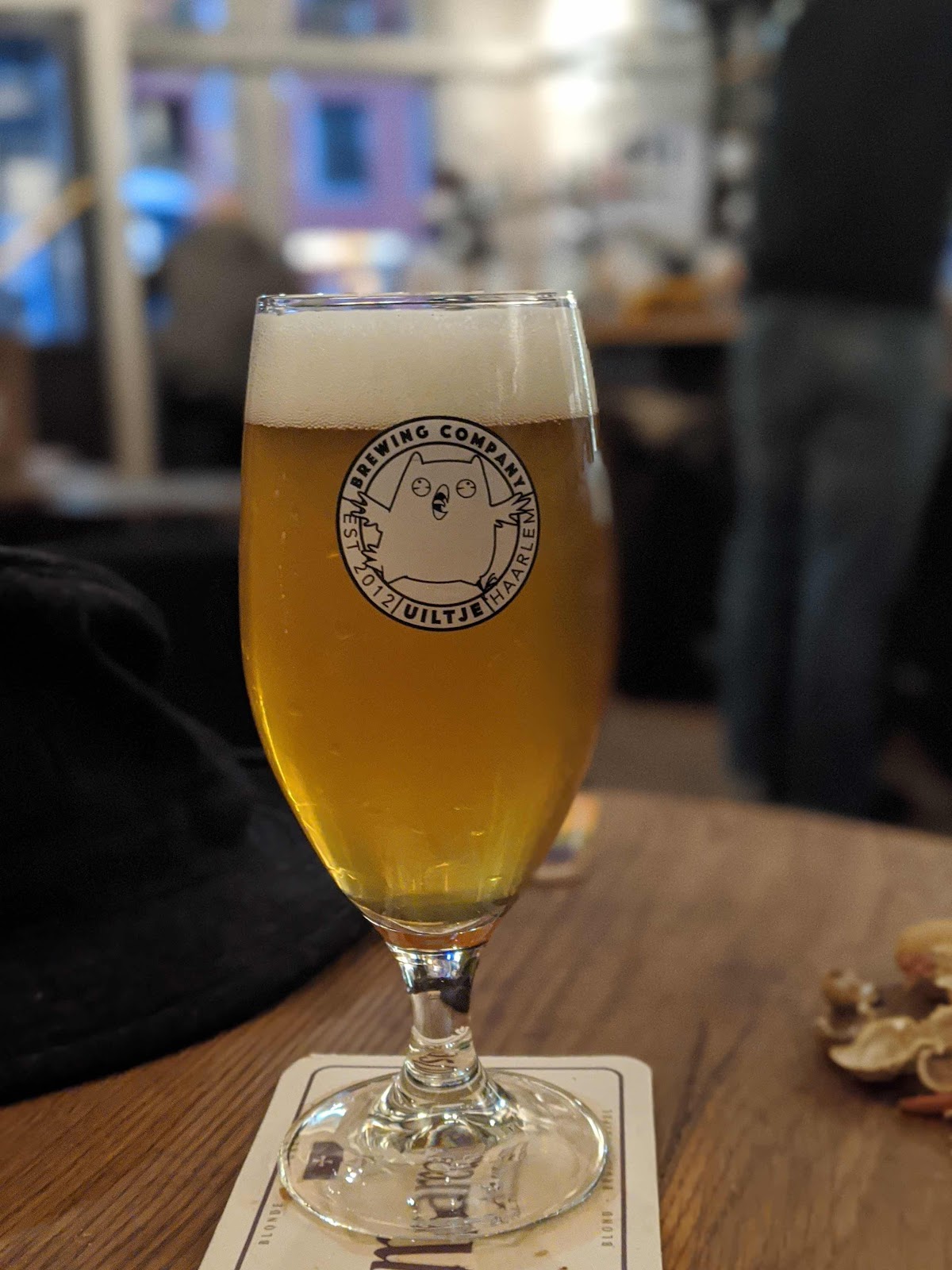 The owner of Foeders, Yuri, is from Belgium and in addition to his wonderful selection of Lambics he has lots of Belgian beers on tap. If I wasn’t headed to Belgium next week I probably would have had a few more. Tonight I just had one, the Dupont Cuvée Dry Hopping. I didn’t ask what hops were in this year’s addition, I just enjoyed it. 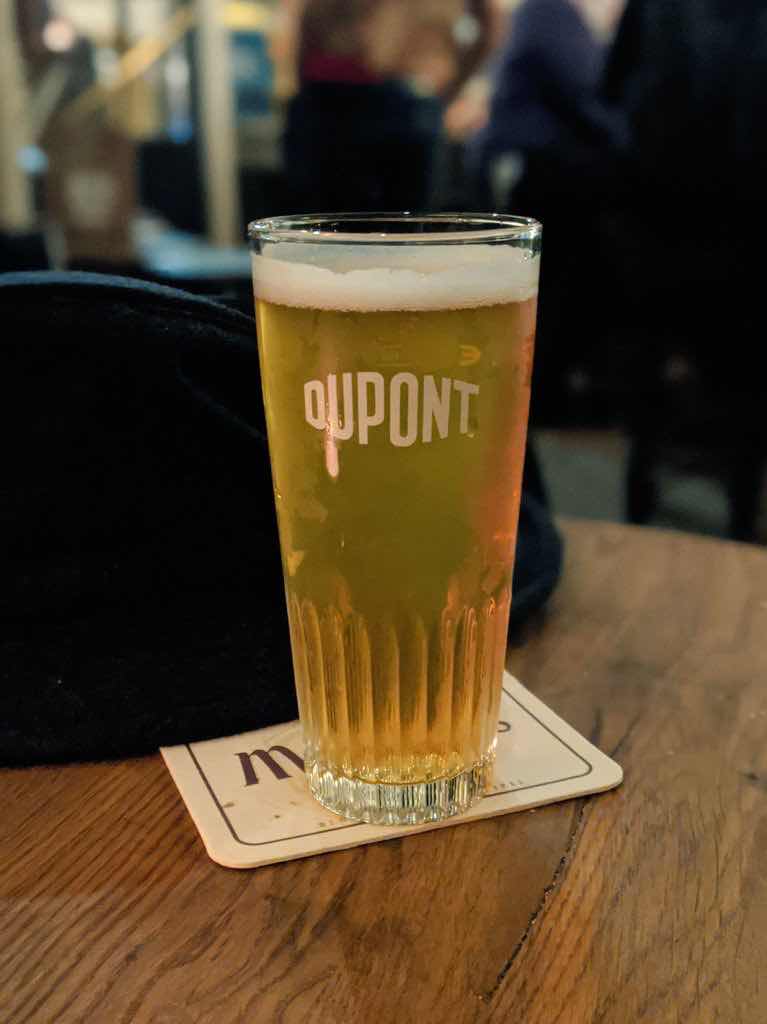 There was one beer I was hoping to find — Weisse Gueze Yasmin — a collaboration between Schneeeule of Berlin and Huissterkerij h.ertie (the lambic blender from Duisburg). This is a double Uli beer — Ulrike from Schneeeule and Ulrich from h.ertie — both known as “Uli” to their friends. Foeders is listed as one of the places that will have it, but it hasn’t arrived yet. It is supposed to arrive next week. I have one free afternoon on Dec 16 so if it has arrived, a visit to Foeders is in order.
Jet lag was kicking in and since I was only 500m from my hotel, I exercised discretion and called it a night.
Posted by The Mad Brewer at 1:20 AM

I appreciate you posting the tap list, and in particular the pricing thereof. Because were I to ever again visit Amsterdam (I was there in November 2000 for the Pint .nl beer festival. This remains the last time I was in Europe.), it gives me an idea of how much would I spend there each day.