I started off the day taking the number 11 tram to Dageraadplaats and stopped in at Cafe Zeezicht. The have 8 fairly regular beers on tap and two that rotate. Always something good to drink. 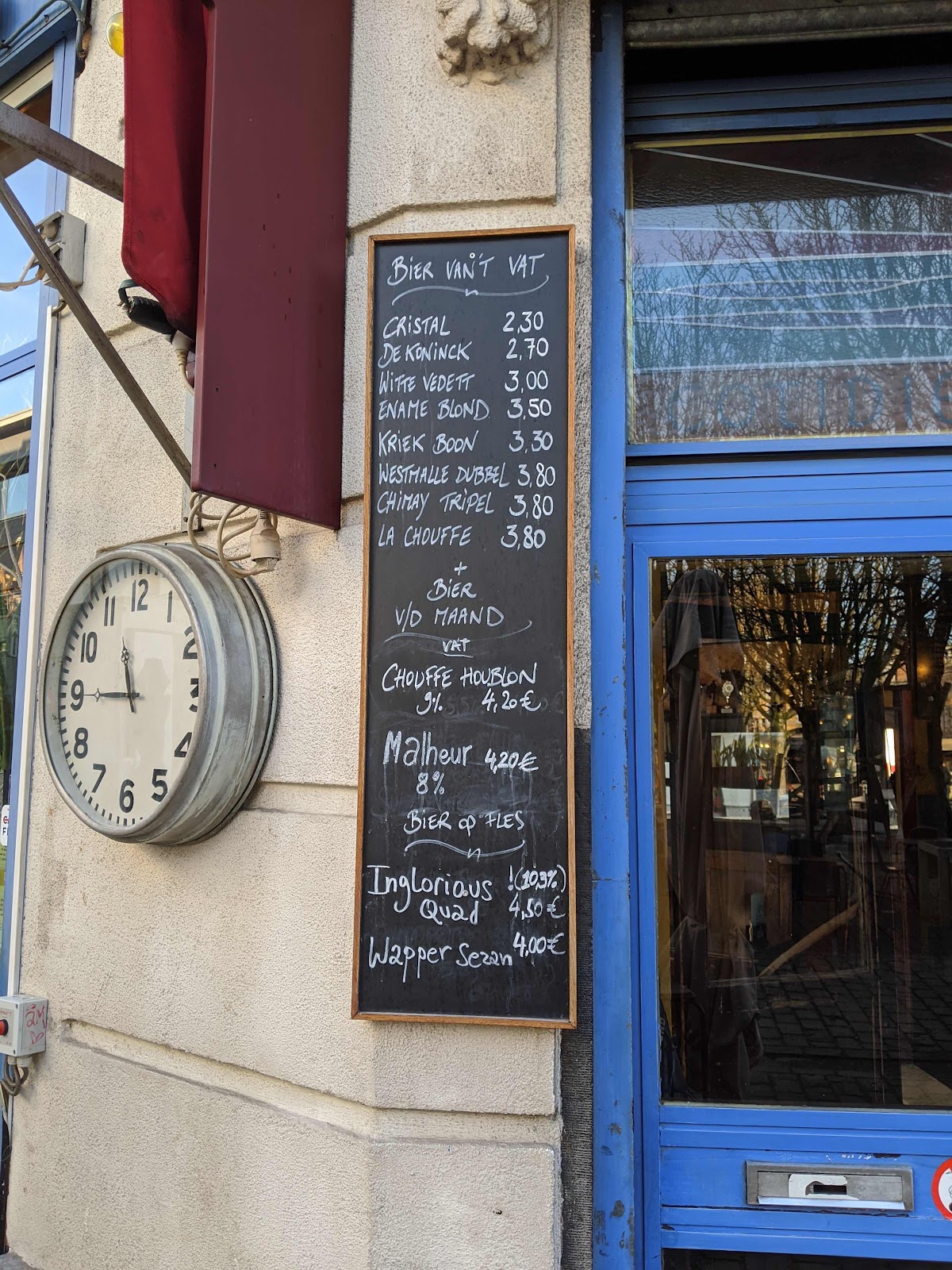 I started with what the inside board called Matheus IPA. It was delicious. 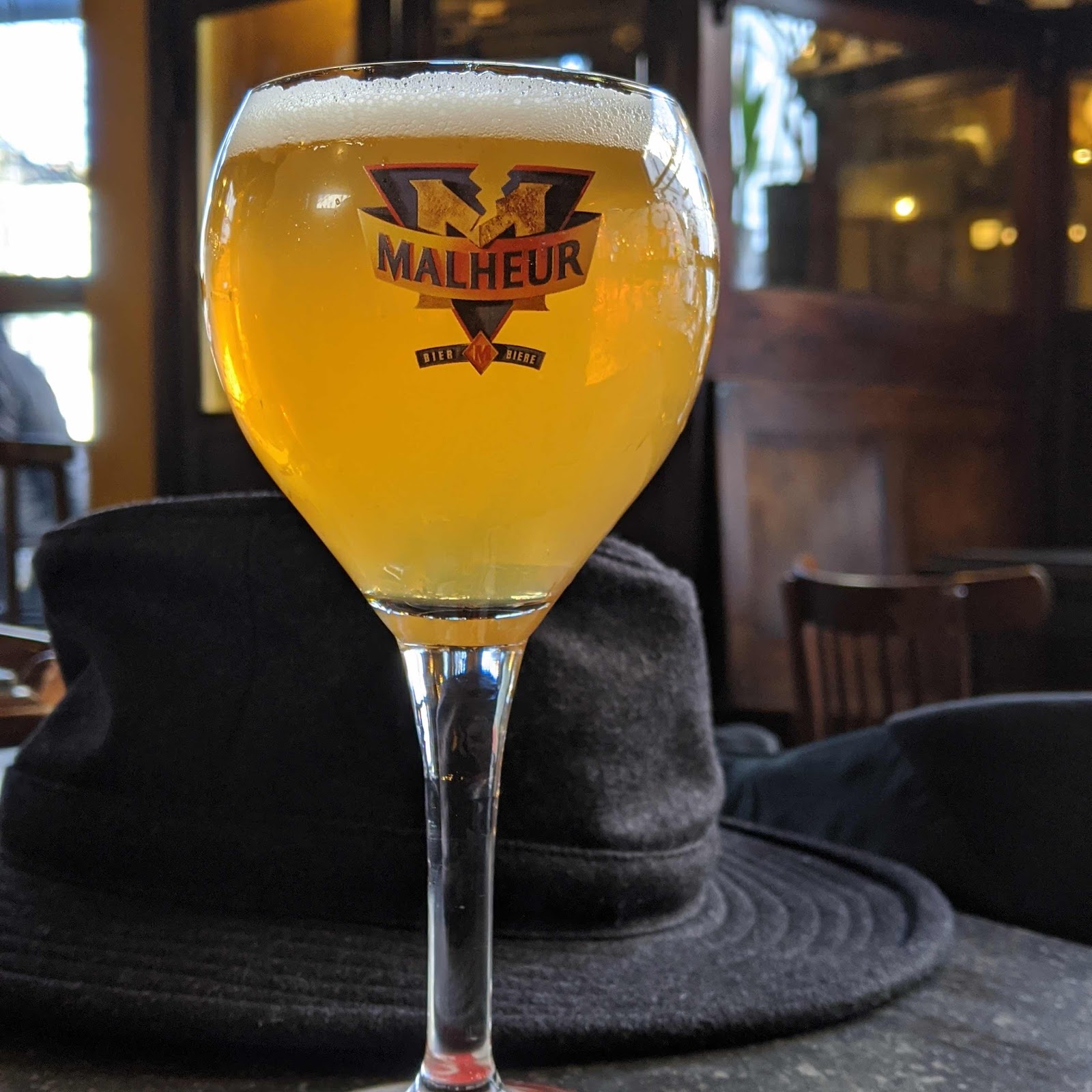 The Zeezicht has a hearty soup of the day but today I wanted a little bit more so I ordered the lasagne. Meat and spinach, what’s not to like. 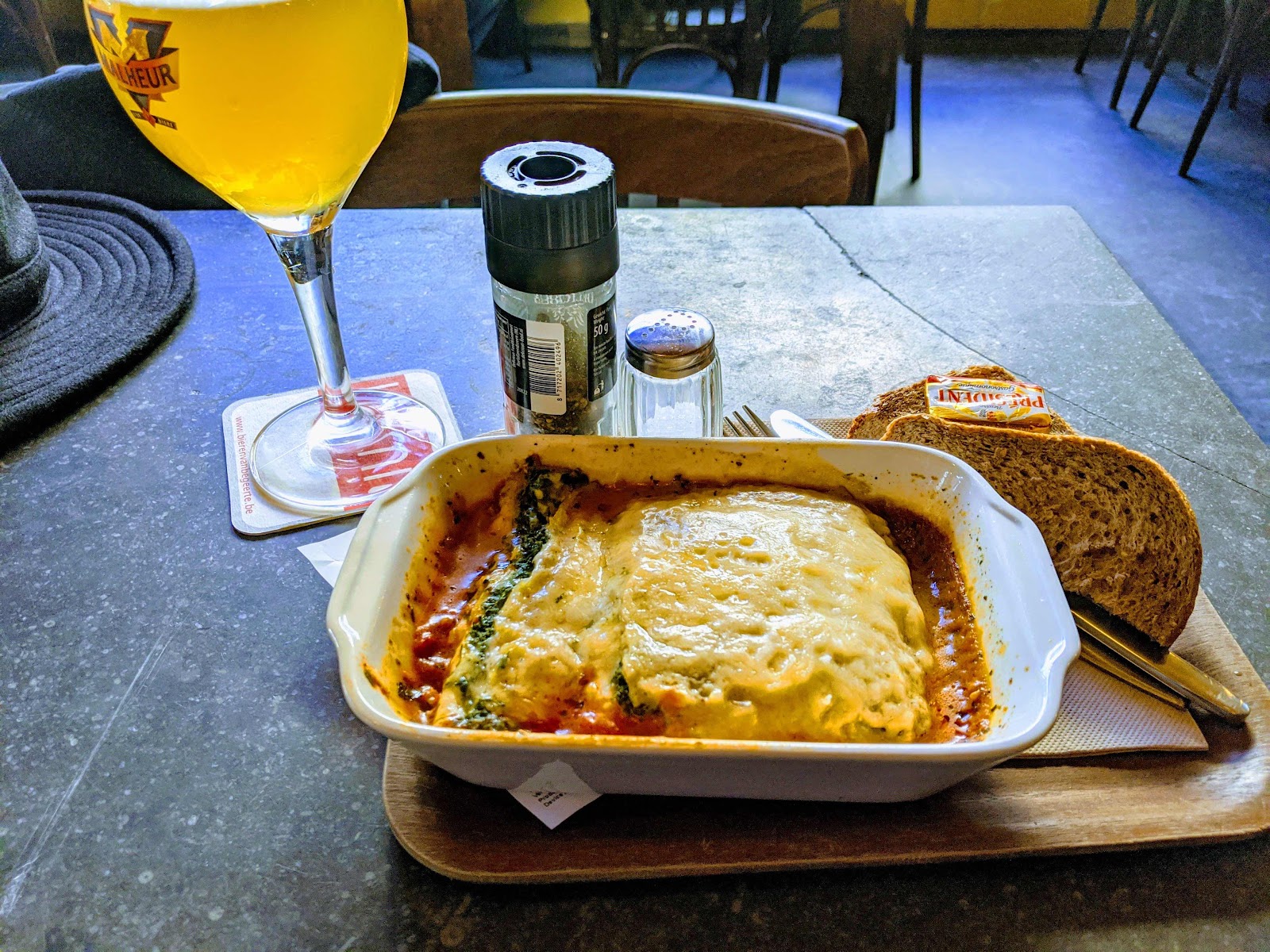 Next up I had the Chouffe Houblon. This was one of the first “Belgian IPAs’ that I had and it still is a good beer. I haven’t had one in awhile so it was a pleasant surprise. 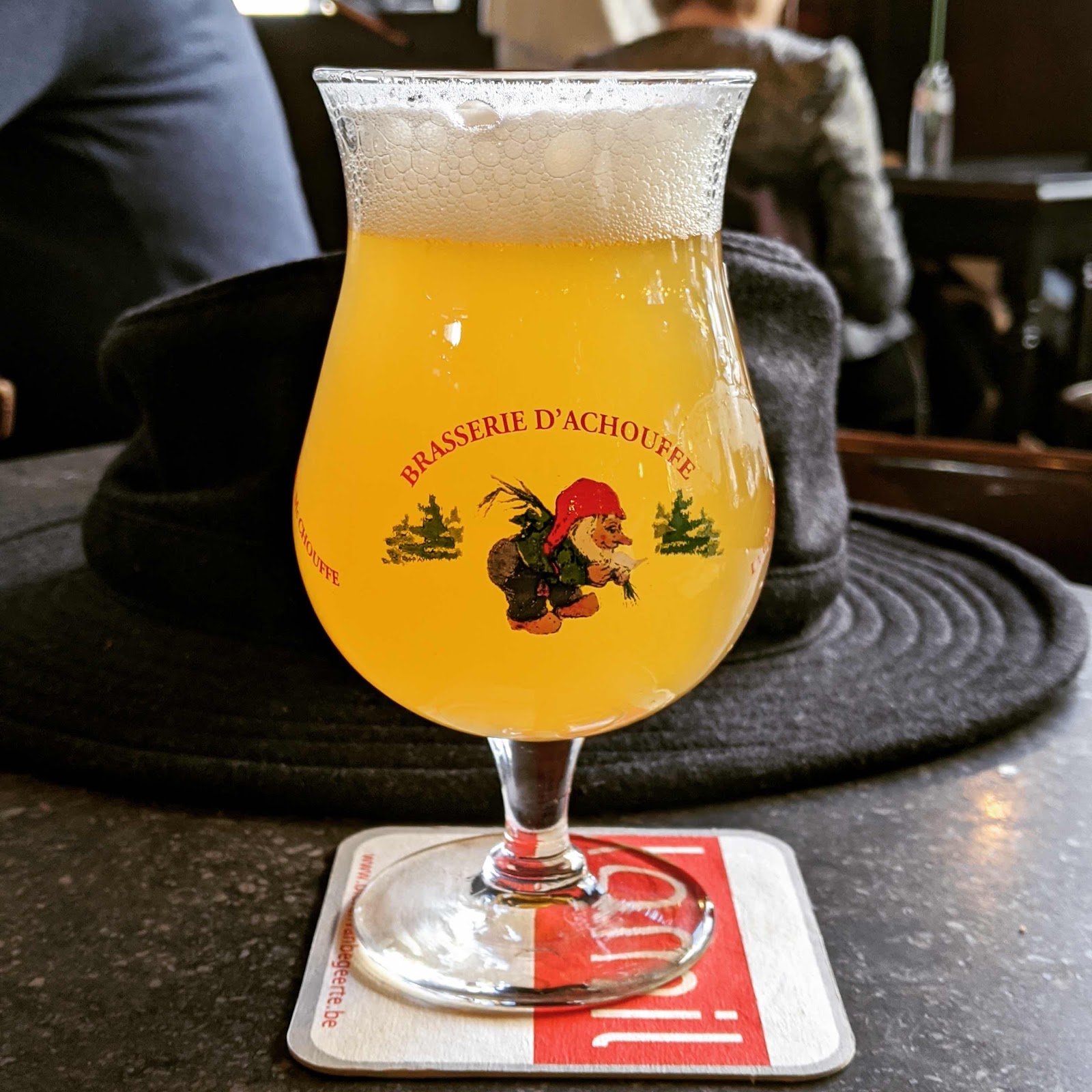 There is another nice pub on Dageraadplaats — Moeskop — but I wanted to visit a new place so I took the tram back across town. I needed up being way too early, though. Luckily in Antwerp just about every other pub carries De Koninck. This one was De Konincklijke Snor, which I assume translates to “The Royal Mustache” 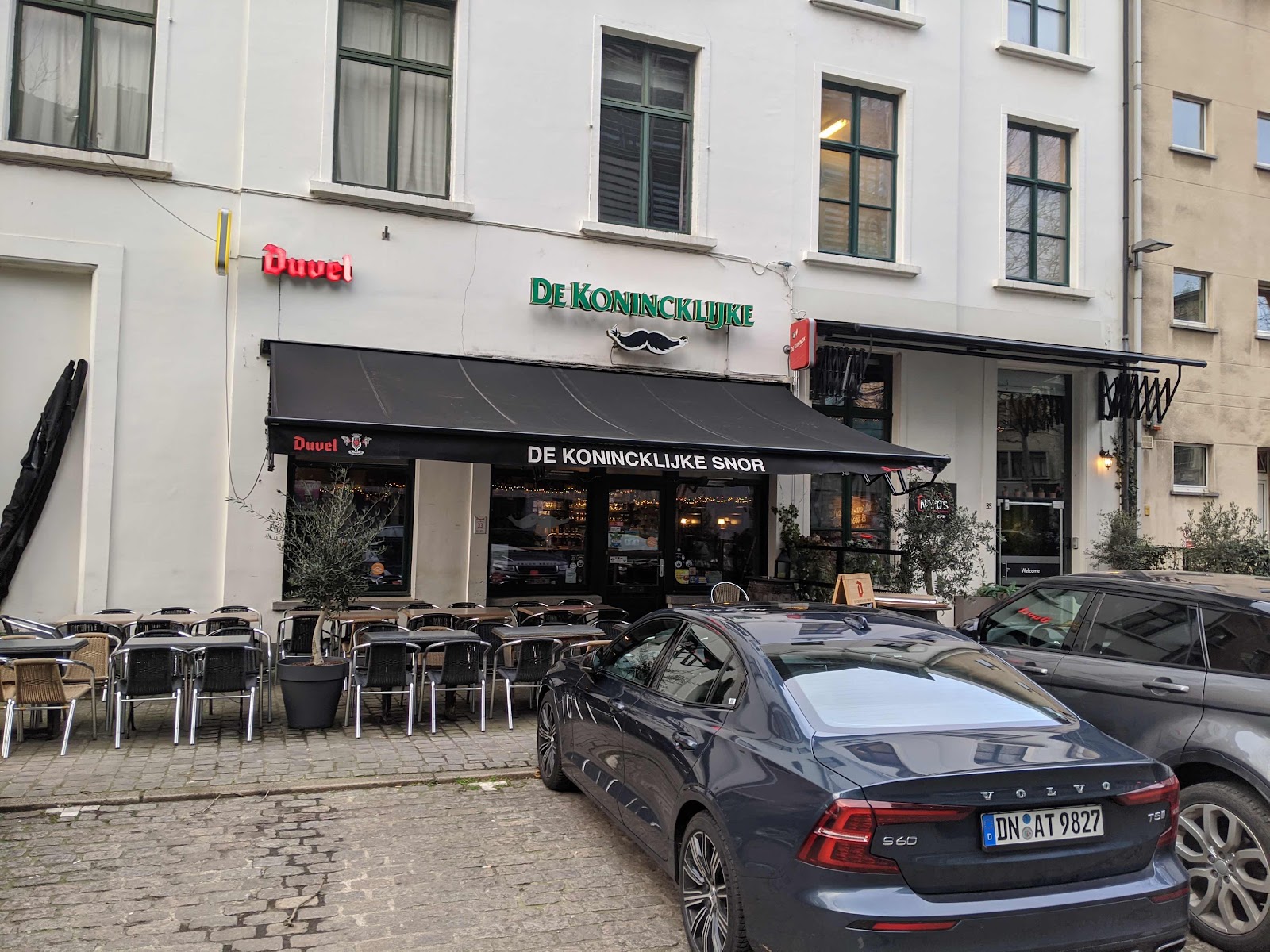 I went in an ordered a Bolleke. That also had Triple d’Anvers Tank 7 (originally by Boulevard but now brewed in Belgium) and Chouffe. A fairly standard Duval/Moortgat lineup. It obligatory Chouffe gnome was sporting a mustache, though. 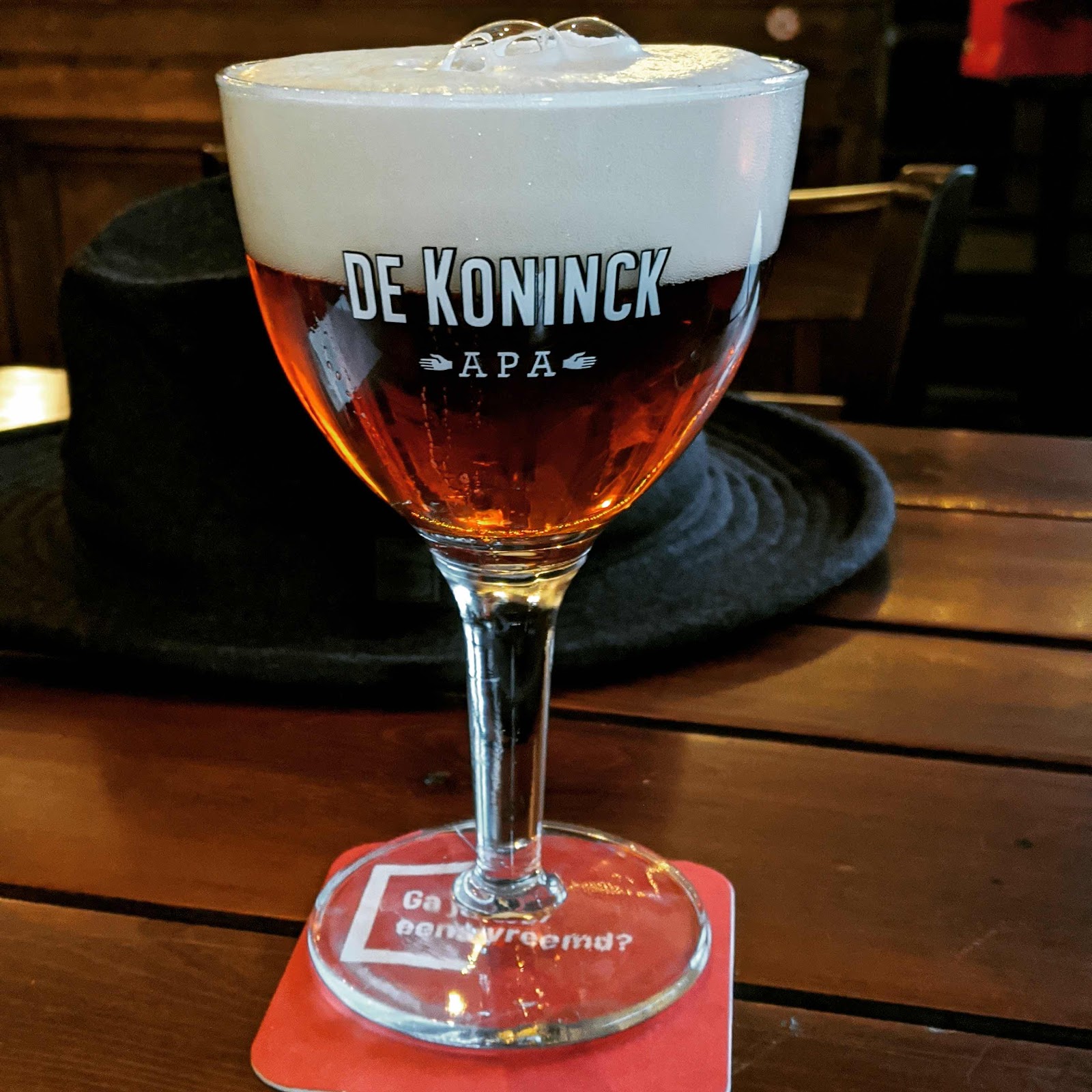 I was a little disappointed in the De Koninck — I think maybe the Mustache needs to clean its lines.
The place I was waiting for was right next door, called Dr. Beer. They are a fairly new place, have 8 beers on tap and a larger bottle/can selection. They supposedly specialize in beer from newer small Belgian breweries and I was interesting in see what they had. Unfortunately that will have to wait. I waited until 15 minutes past their opening time, before I decided it was getting too cold just sitting there so I headed back to the city center. Another man was waiting as well — he turned out to be a bartender. 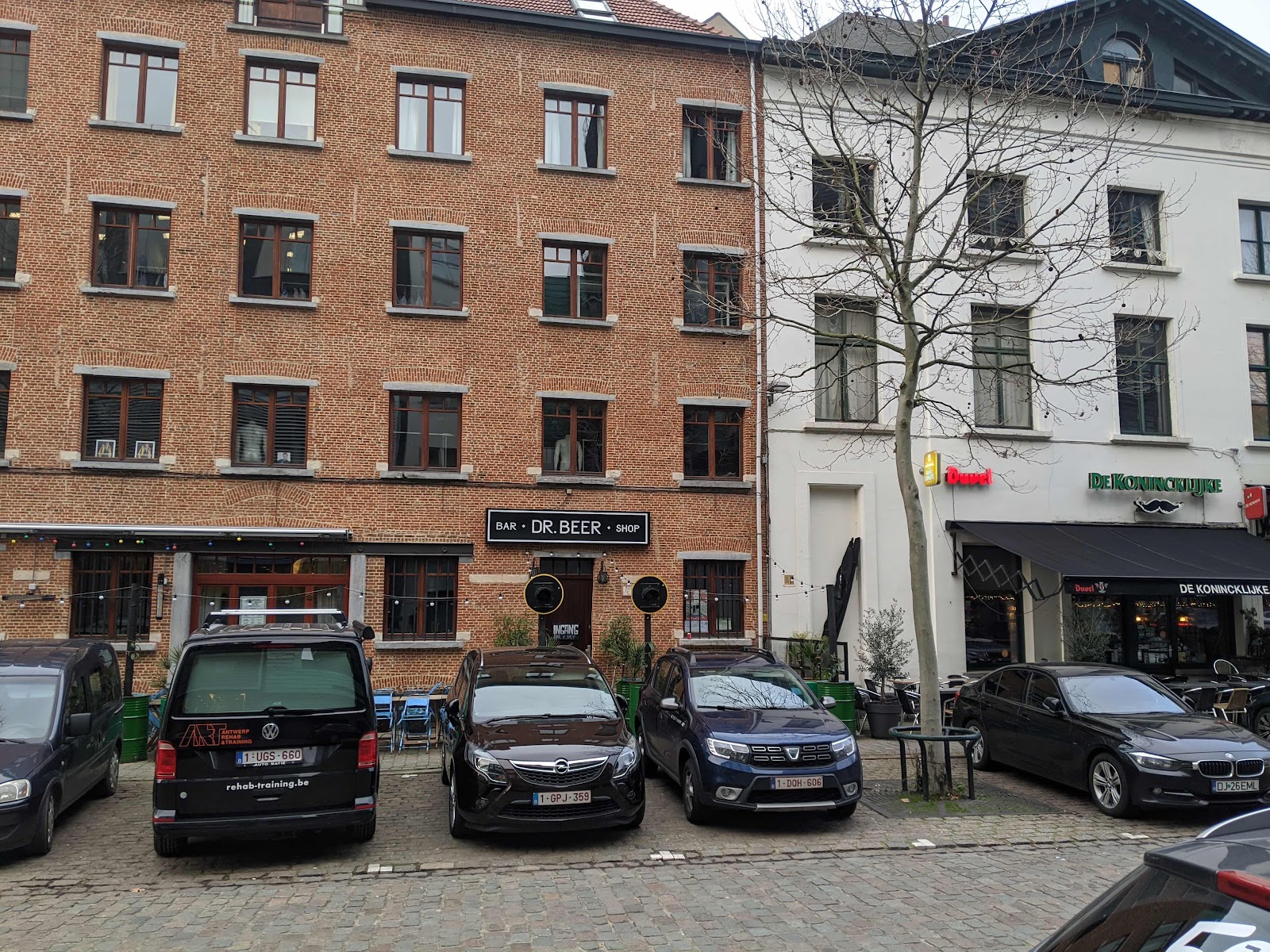 So I caught the number 7 tram and soon was at the Kulminator. I asked how fresh the Orval was and Leen checked and said it was bottled in November. Sounds good to me, they are never that fresh in Los Angeles. 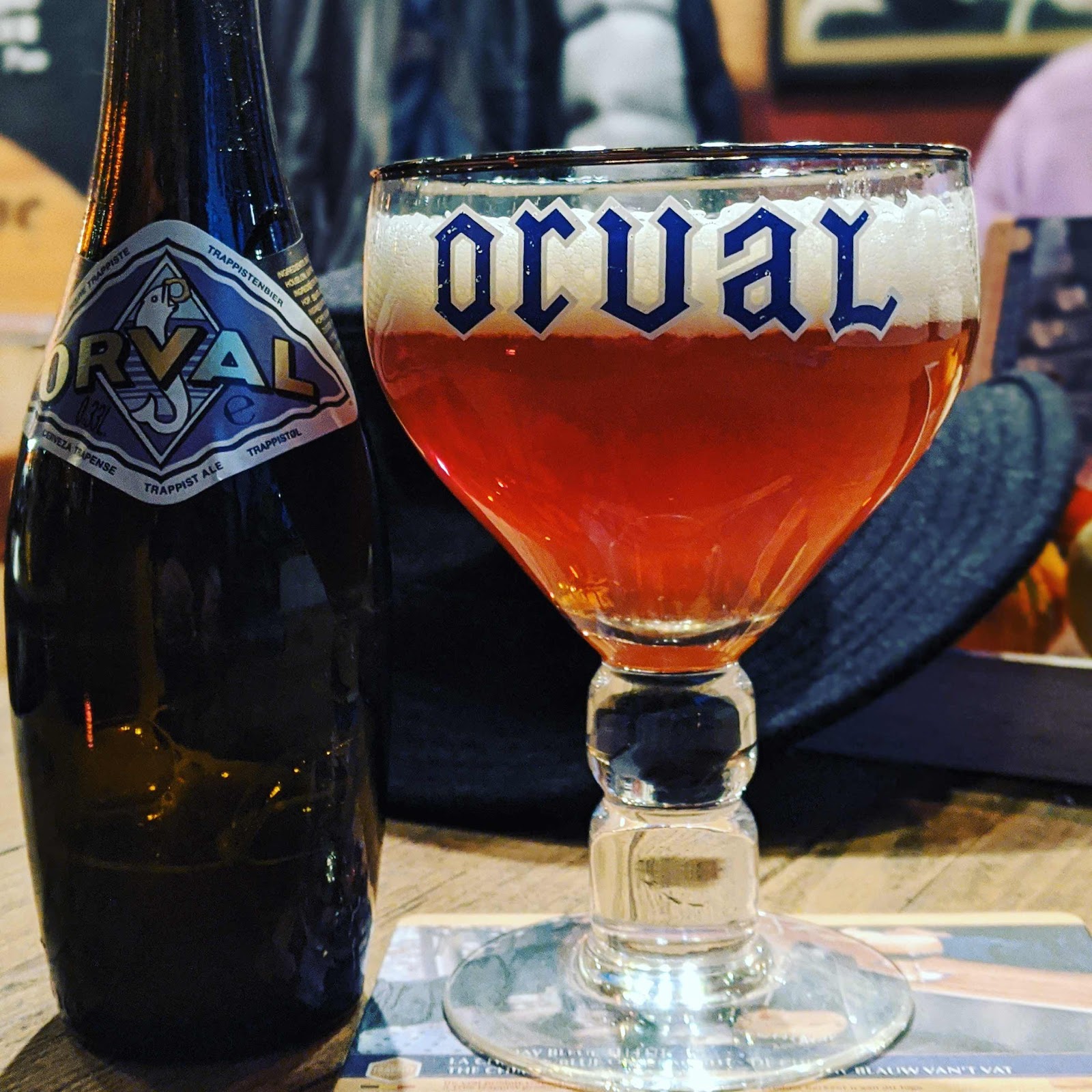 Somebody at the table ordered the Spencer IPA. This is brewed at Trappist Monastery in Massachusetts. It was tempting, but I didn’t travel to Belgium to drink American beer. 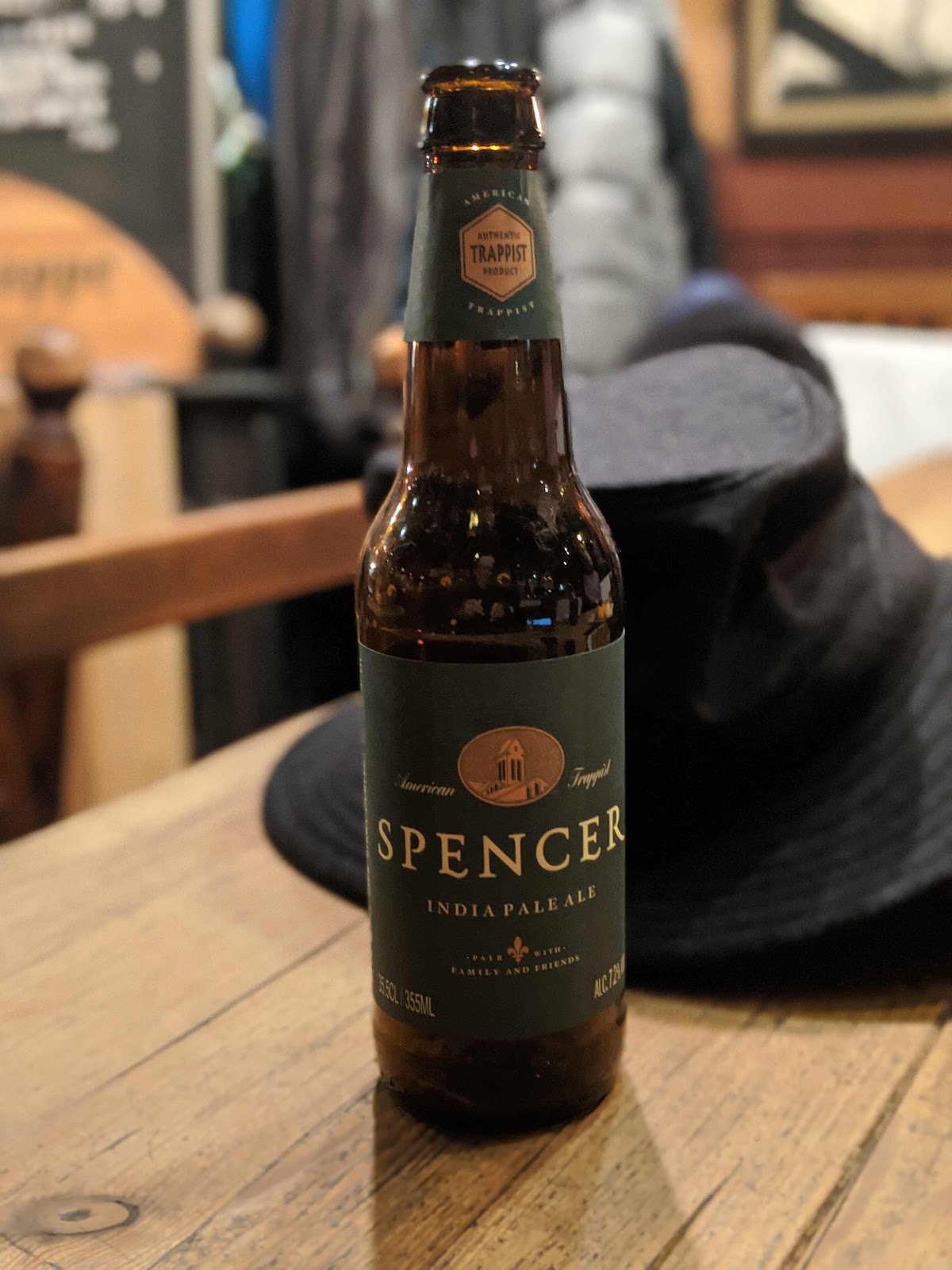 I said earlier I really like the Het Anker Cuvée van de Keizer better without the whisky infusion. That doesn’t come in a small bottle but their Gouden Carolus Tripel does, so I ordered one of those. Their beers have just a hint of licorice— which I have always assumed comes from the yeast — that I really like. 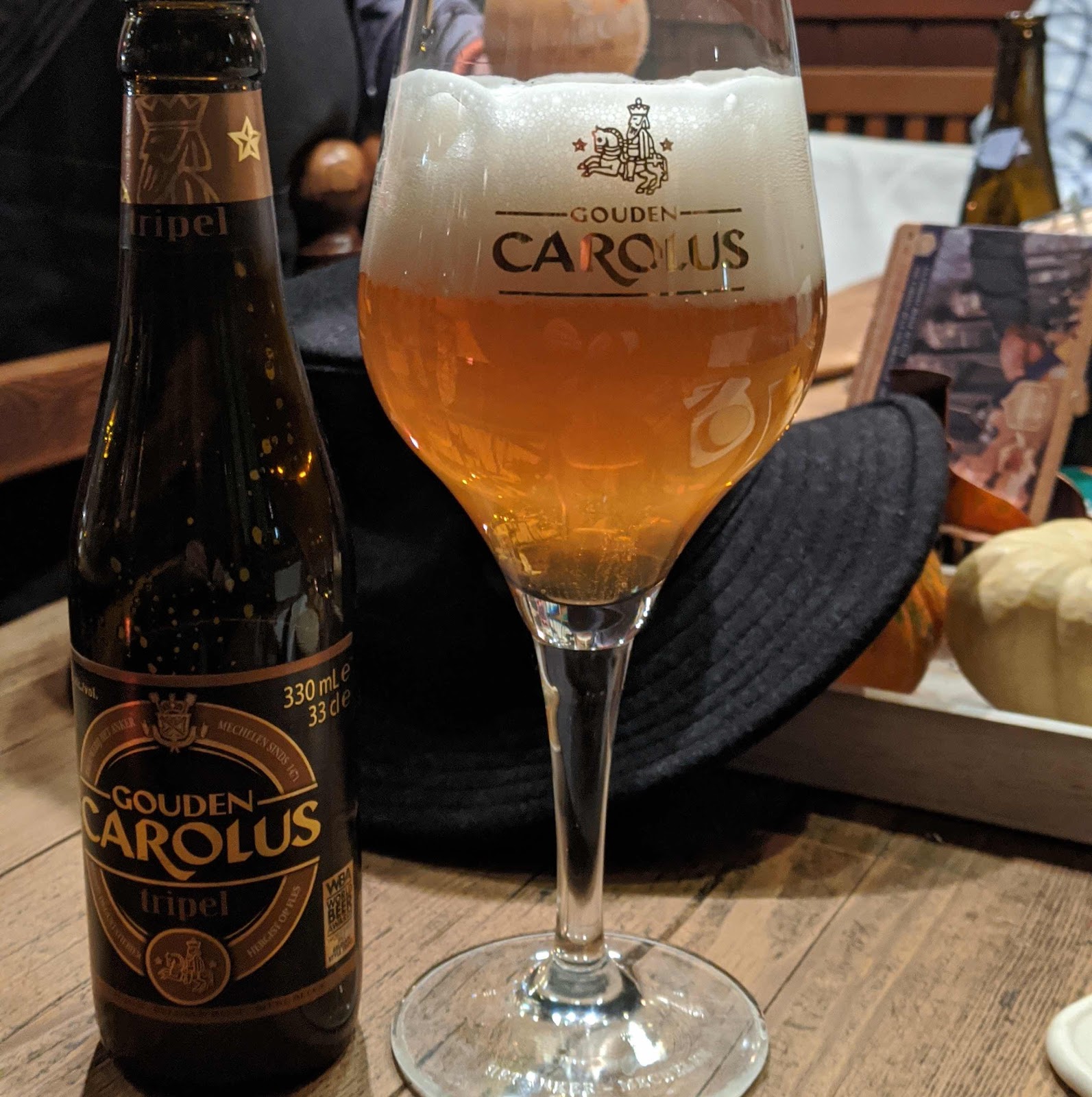 Since I was drinking tripels, I decided next to have the granddaddy of them all, Westmalle 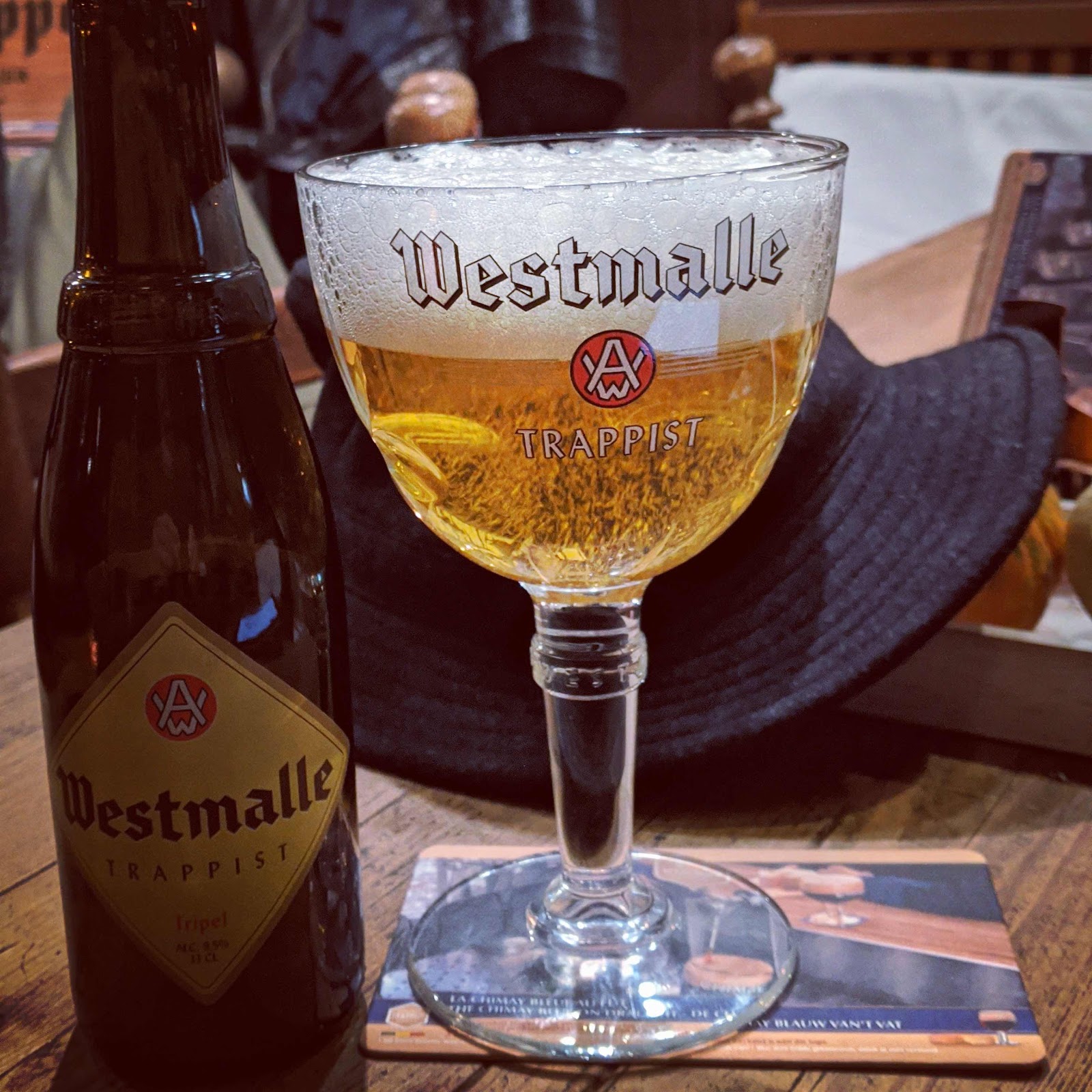 Nothing much to say about that, it was wonderful.
I was getting close to calling it a night so I had my dessert, De Dolle Stille Nacht (2019) 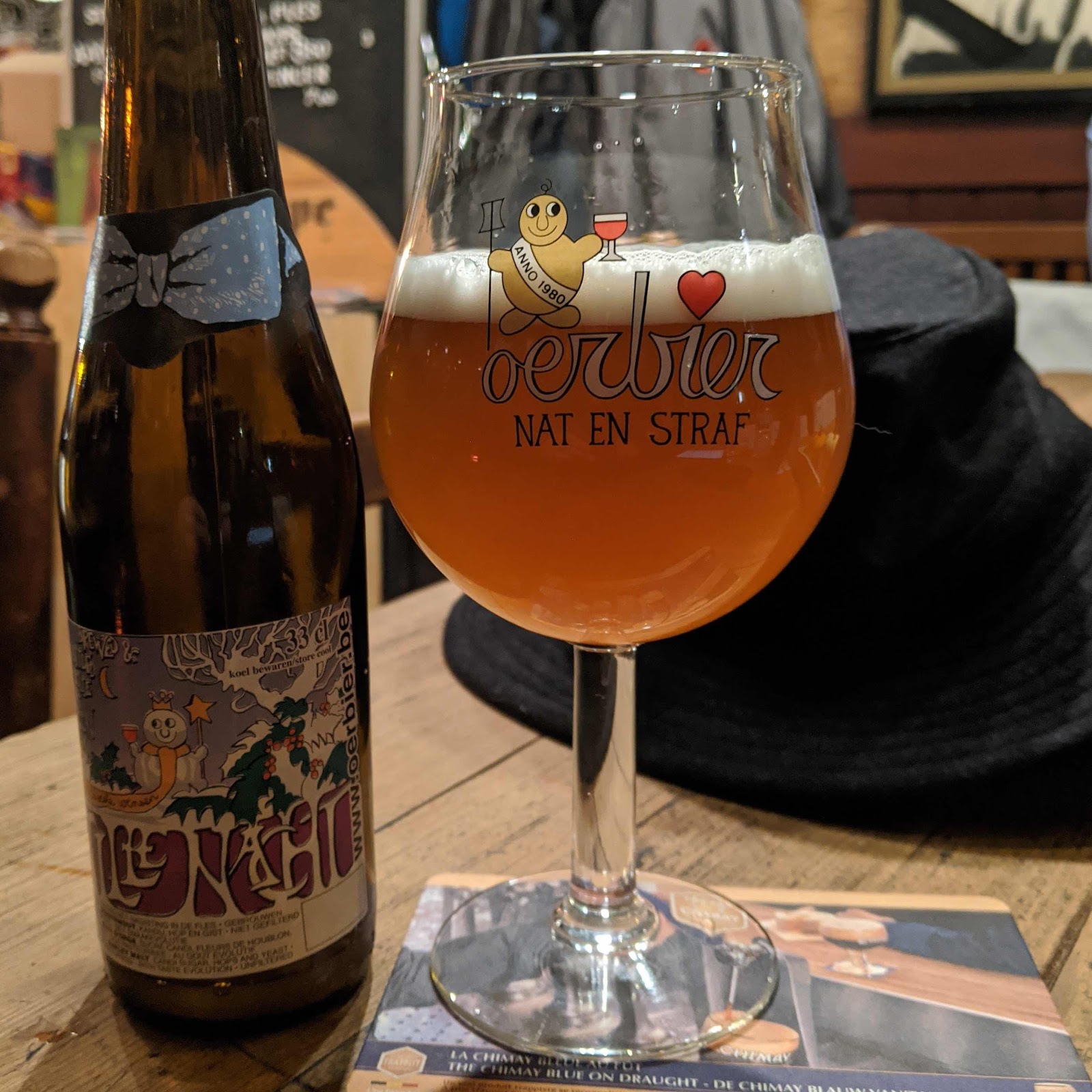 I found it way too sweet, the candy sugar just too overpowering. That means though, that in a few years this will likely be a great beer. Last years version was ready to drink right away, so each year is different.
Then Dirk brought out something special — a Postel Kerstbier from 1995. He thought this might be the last bottle in the cellar, though he admitted he might have misfiled some and they might turn up when he was looking for something else.
Unusually for a strong Belgian beer, this one was not bottle conditioned. He didn’t know if it was pasteurized. 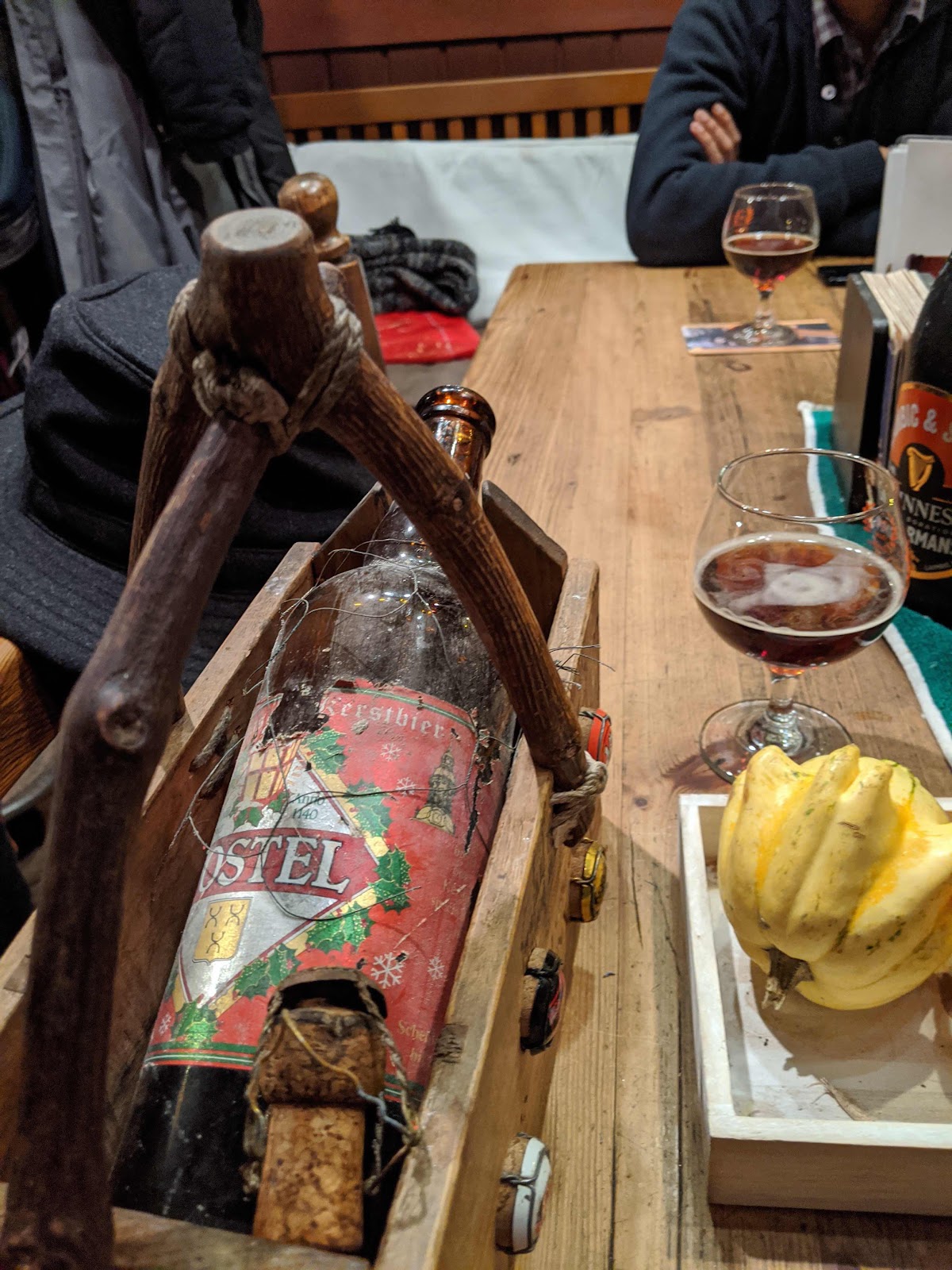 It probably wasn’t a good beer to have after the sweet Stille Nacht. It was greatly oxidized (as you’d expect) but I was getting a lot more wet cardboard than sherry, so I donated my share back to the table and called it a night.