A friend from Utrecht was coming up to drink beer with me today and we decided In De Wildeman would be a good place to meet. The beer list was unchanged from yesterday. I realized I had never had their “house” beer, Gulpener Pilsner so I ordered one. It was a perfectly pleasant glass of beer, but I don’t feel the need to have another one soon. Maybe if I’m back in the warmer months. 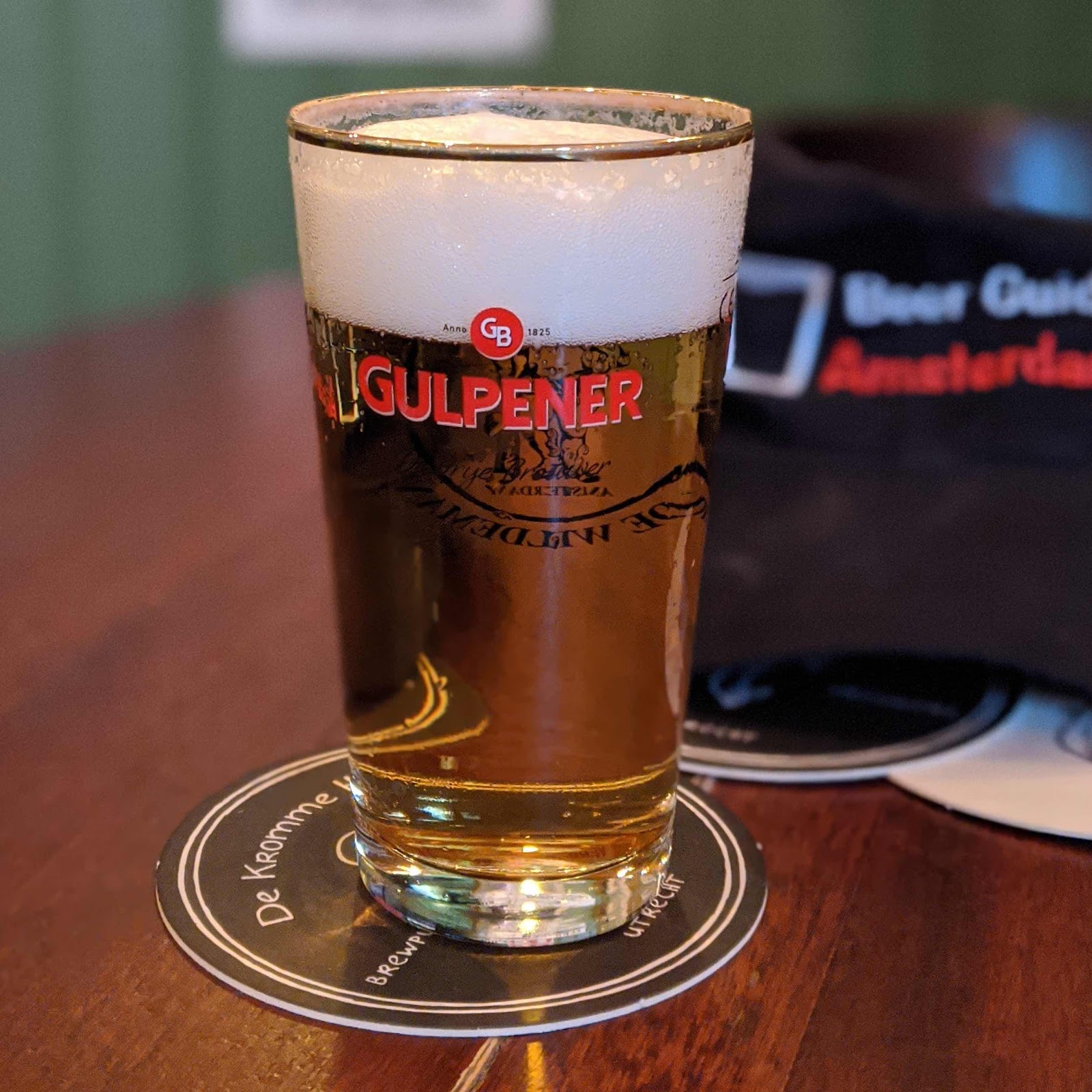 Theo emailed me that he was running a bit late. Oh no!, what to do?  I guess I’ll have another beer. I decided on the De Molen Wiggle and Turn IPA. 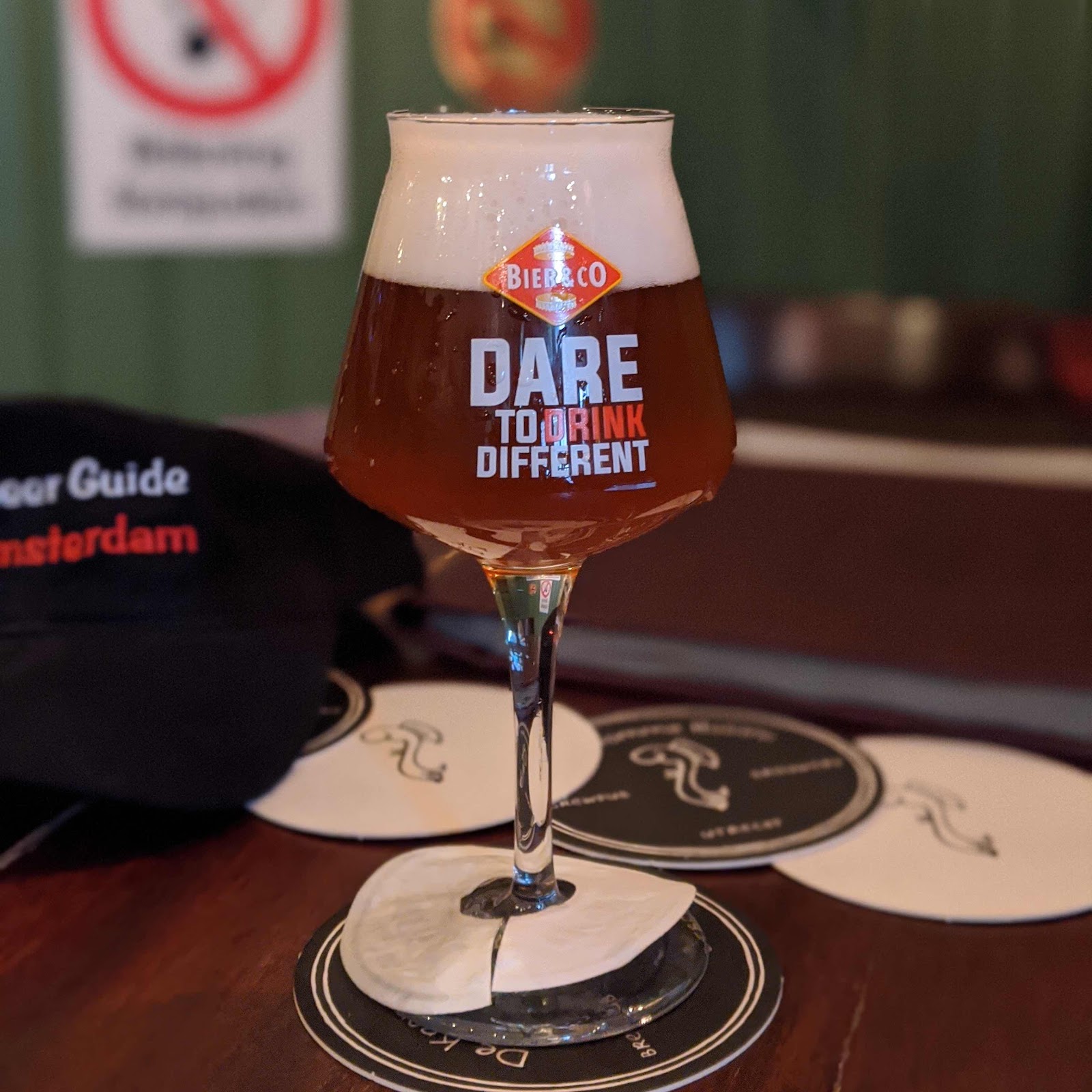 I really like the De Molen dark beers but there other beers have been hit or miss in my book. This one was closer to a miss than a hit. It was bitter enough but there was something funny going on with the malts. You couldn’t really say it was as “hop forward” they IPAs usually are. The beer was well made, no technical flaws but the receipt just didn’t work for me.
Theo arrived and I decided to have a bit to eat and ordered the Chimay Cheese plate. The monks make good cheese as well as good beer. 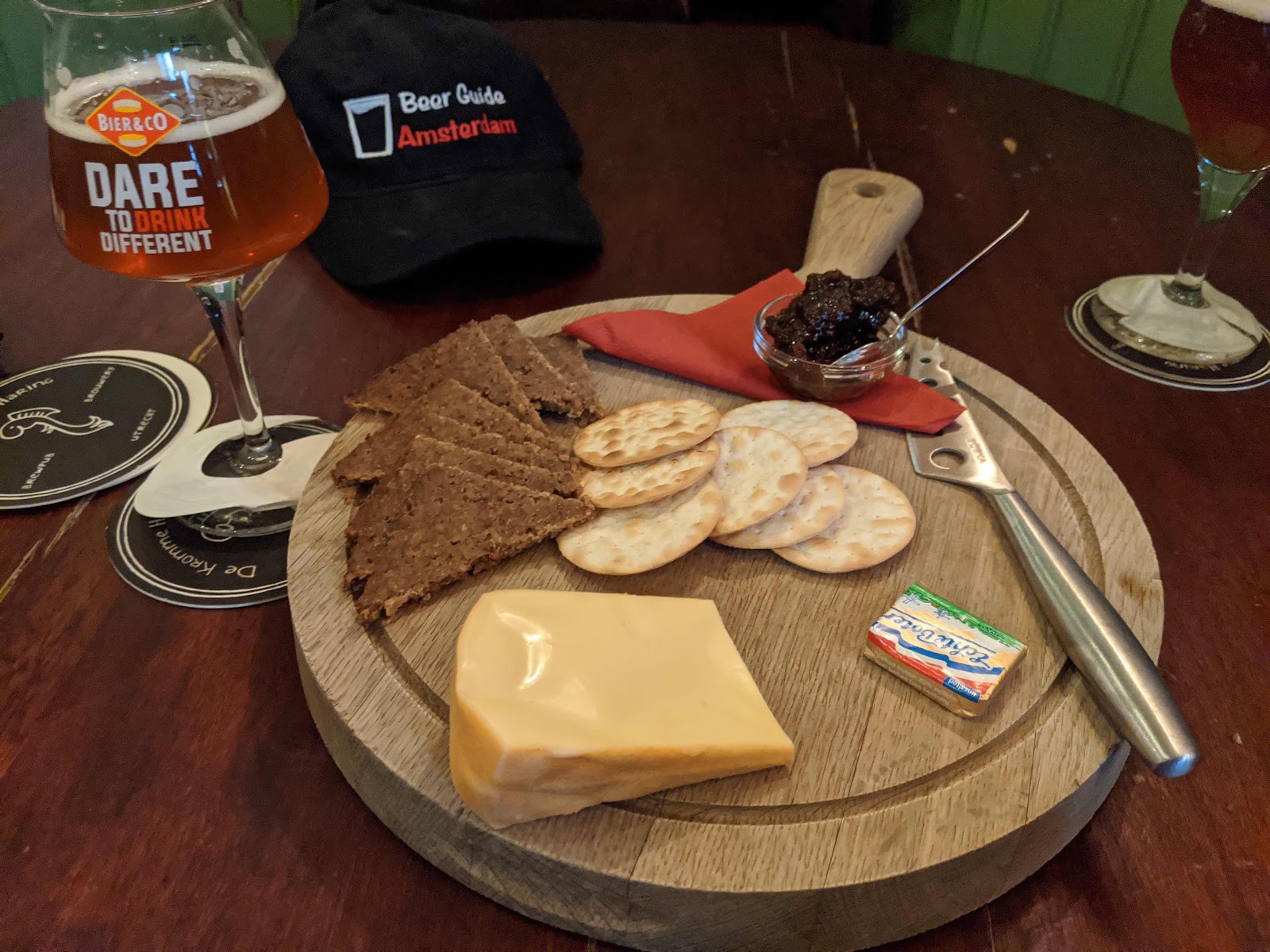 I switched gears a bit with the next beer, a Brett Pale Ale from 7de Hemel, a brewery in Limburg province. While it looks similar to the De Molen above it was completely different. A nice Brett character made this really refreshing and was a good palate cleanser. 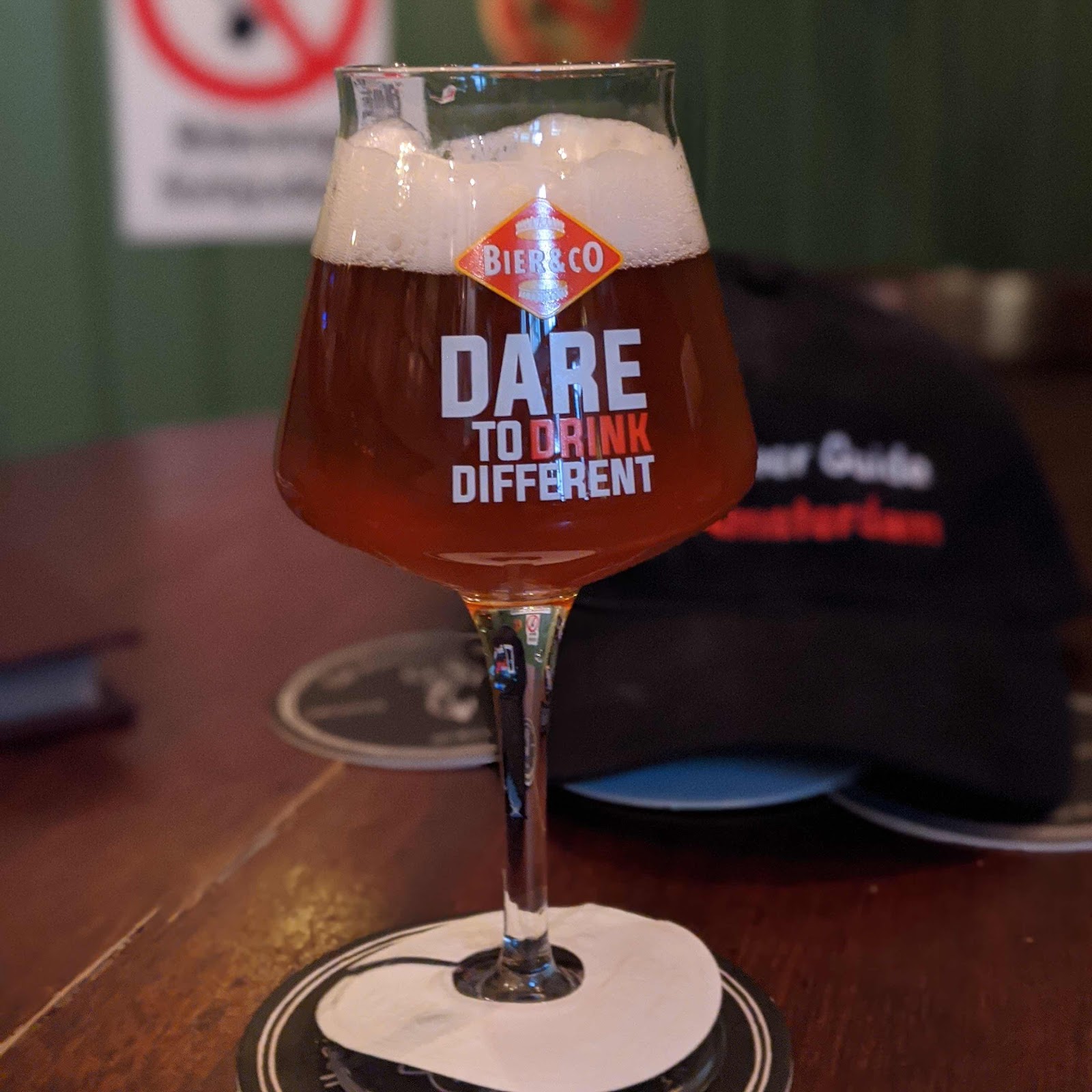 Theo wanted another beer, so I broke down and ordered a Porterhouse Oyster Stout. I really like this beer. 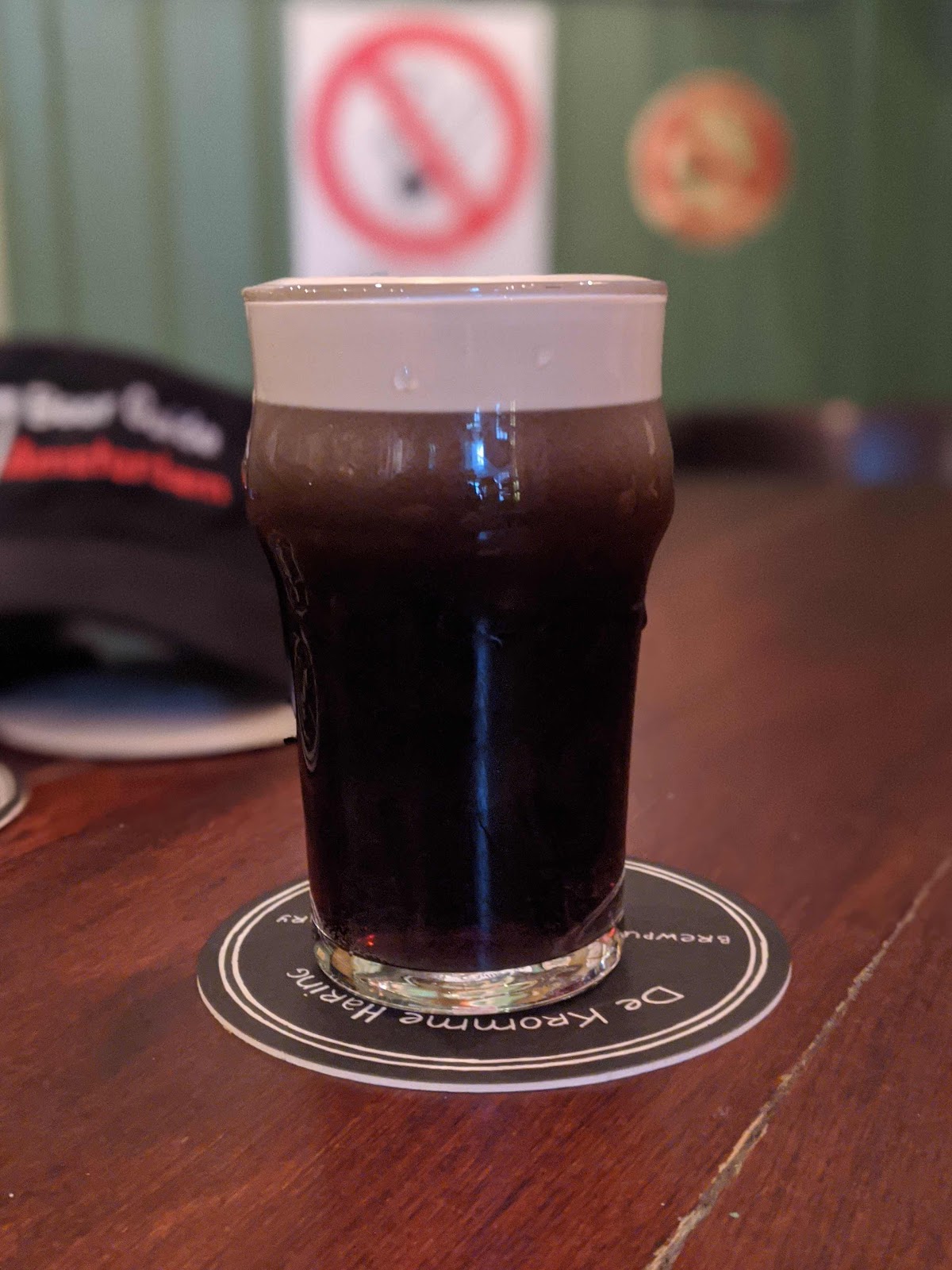 Our next stop was the taproom for De Eeuwige Jeugd. It is multi level pub located in a former bank. 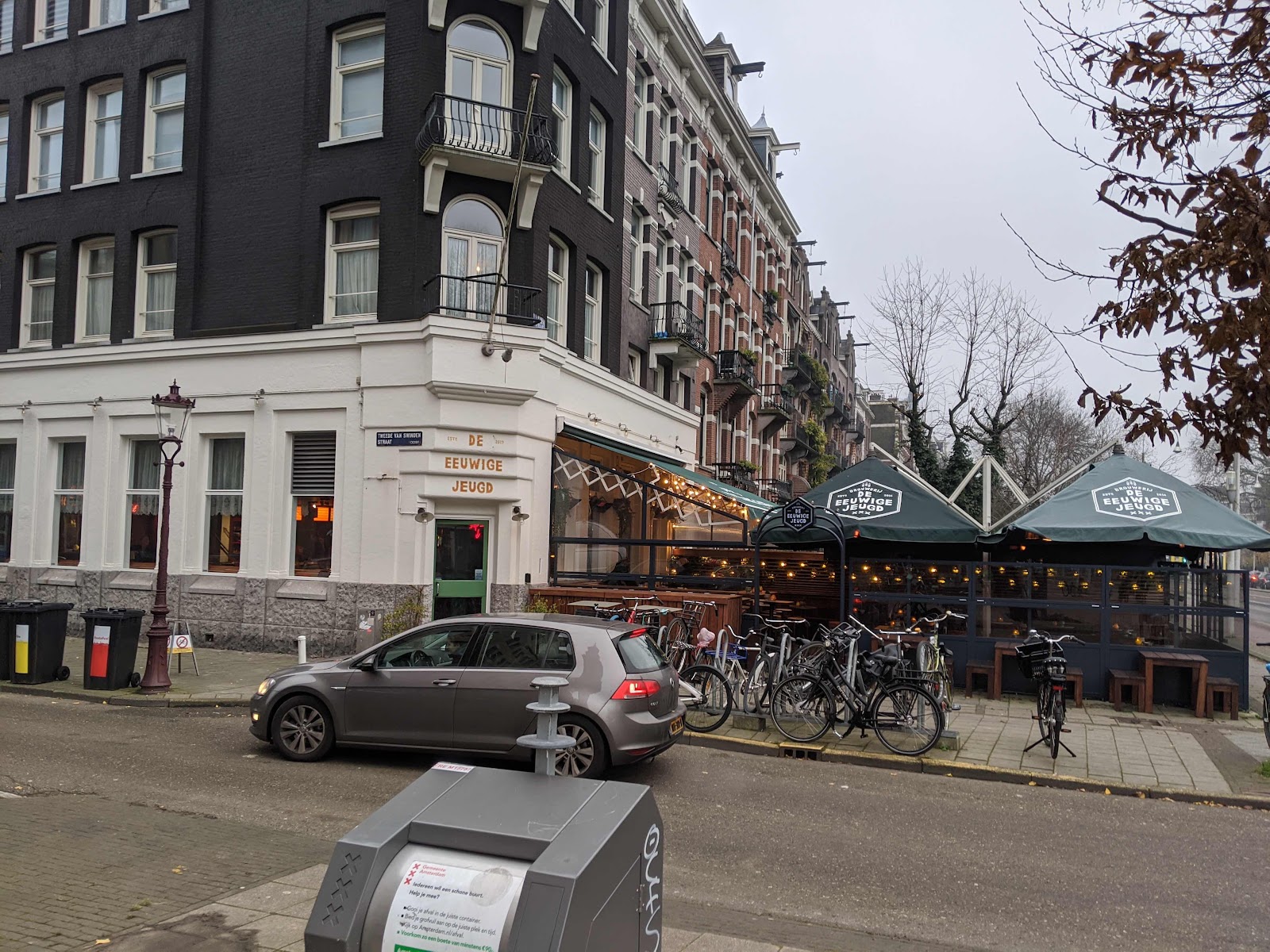 They don’t yet have their own brewery (the beers are contracted brewed) but those I’ve had have been quite nice so I was looking forward to the visit.
They had 13 of their own beers and 7 guest beers so something for everybody.

As a mathematics major I was intrigued by the  Pi IPA but decided to stick with the De Eeuwige Jeugd beers, so I ordered the Jeugd Pils. 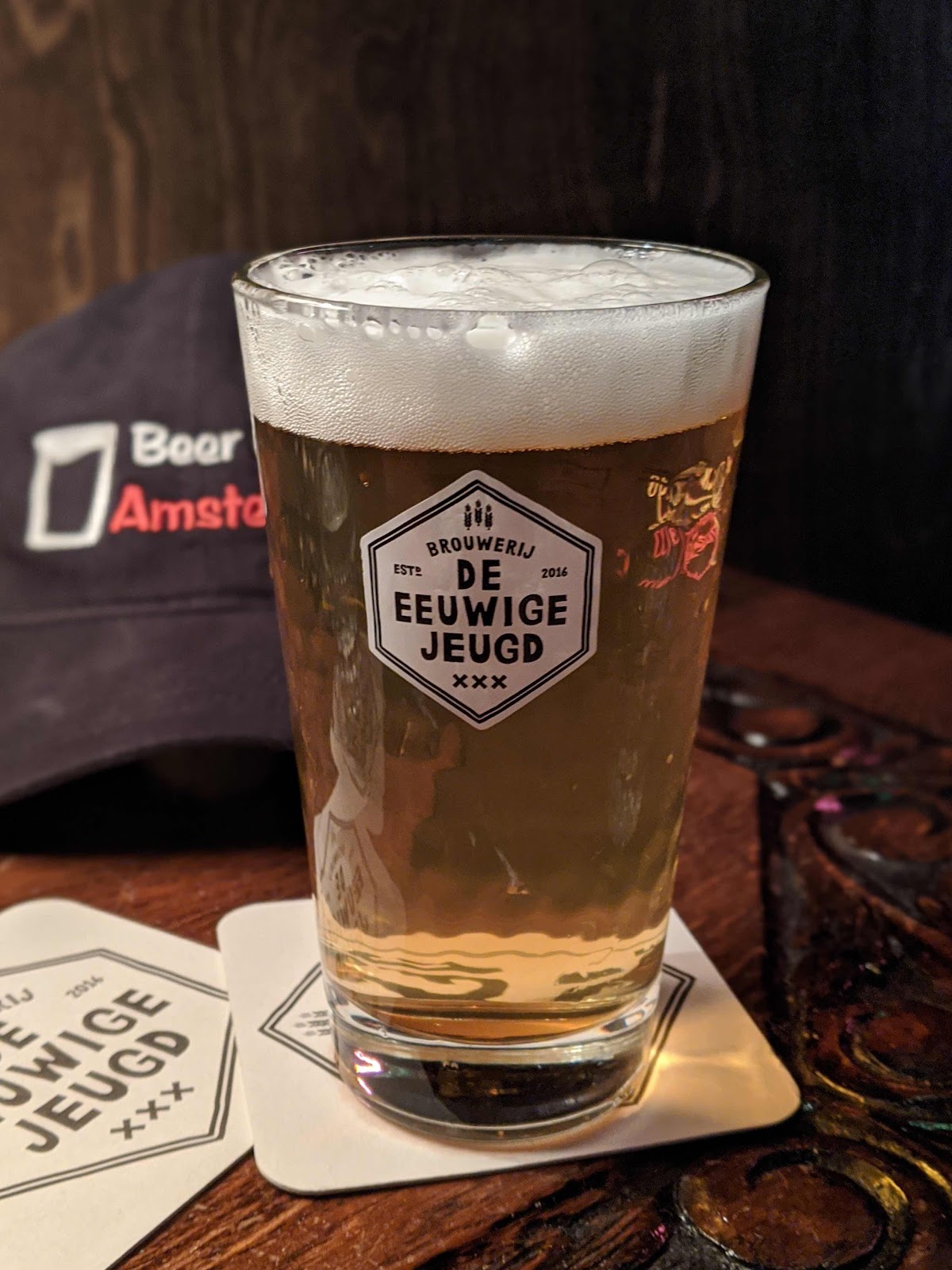 Looks pretty, doesn’t it? Unfortunately it was a buttery mess, pretty much undrinkable. Before I knew it, Theo had grabbed the beer and headed back to the bar and had an animated conversation with the staff. In a few minutes he came back and said they had another tap with the Pils on this new beer was from that. That one was very nice, what I had been expecting.
Theo went back the bar and had another conversation with the staff and then told me he got the manager to have the staff taste both taps of the beer to further their education in to beer flaws. That is making lemonade from the lemons.
I decided next to try the Thuysfluiter, which was a hoppy lager. 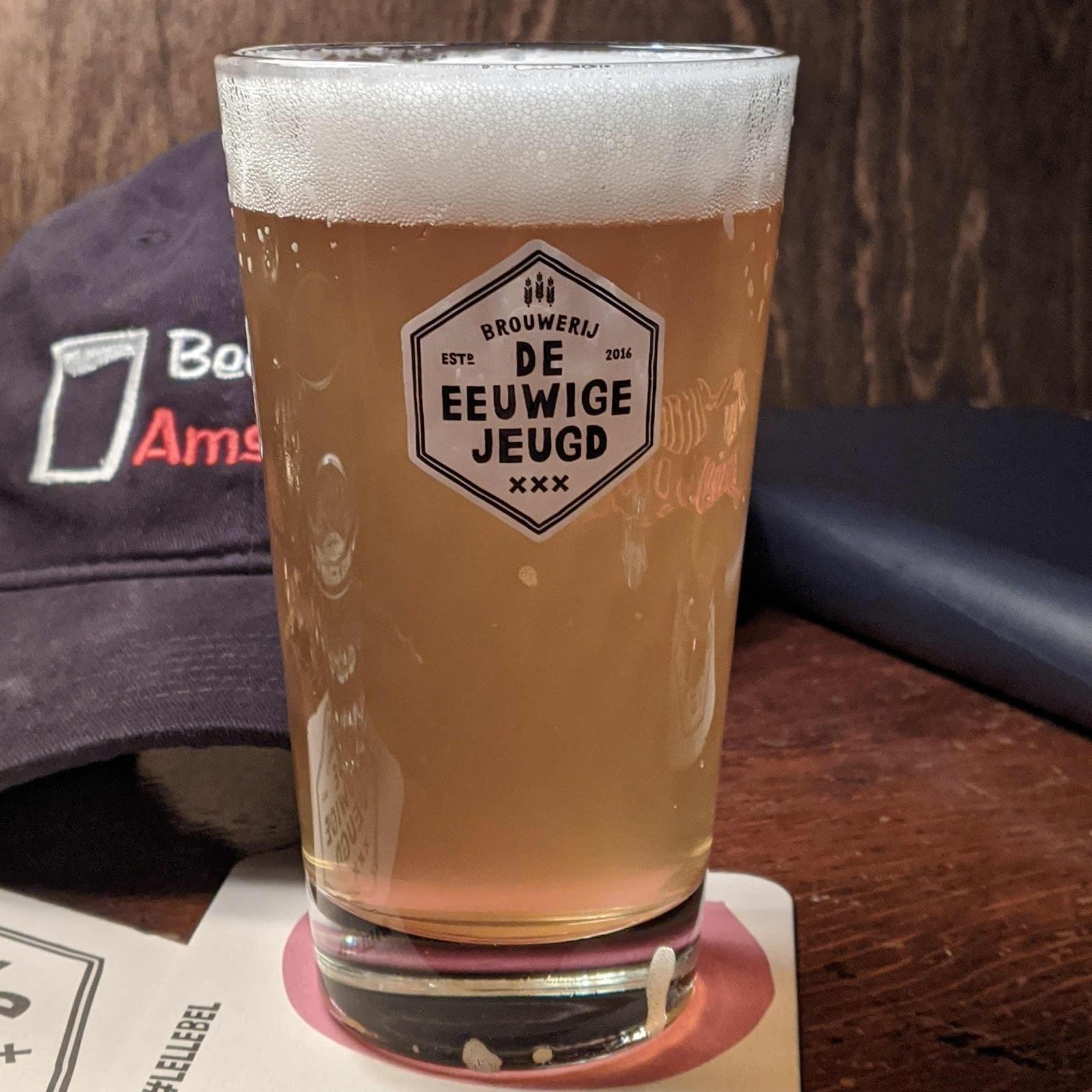 It really wasn’t that much lighter than the Pils, just different lighting in the pub (as it got dark outside they turned up the lights). It was a nice beer and I’d order it again.
Theo wanted to check out the Tears Bar (Butcher’s Tears taproom). It was on the other side of town but we had a decent tram connection so we hauled ass across town. 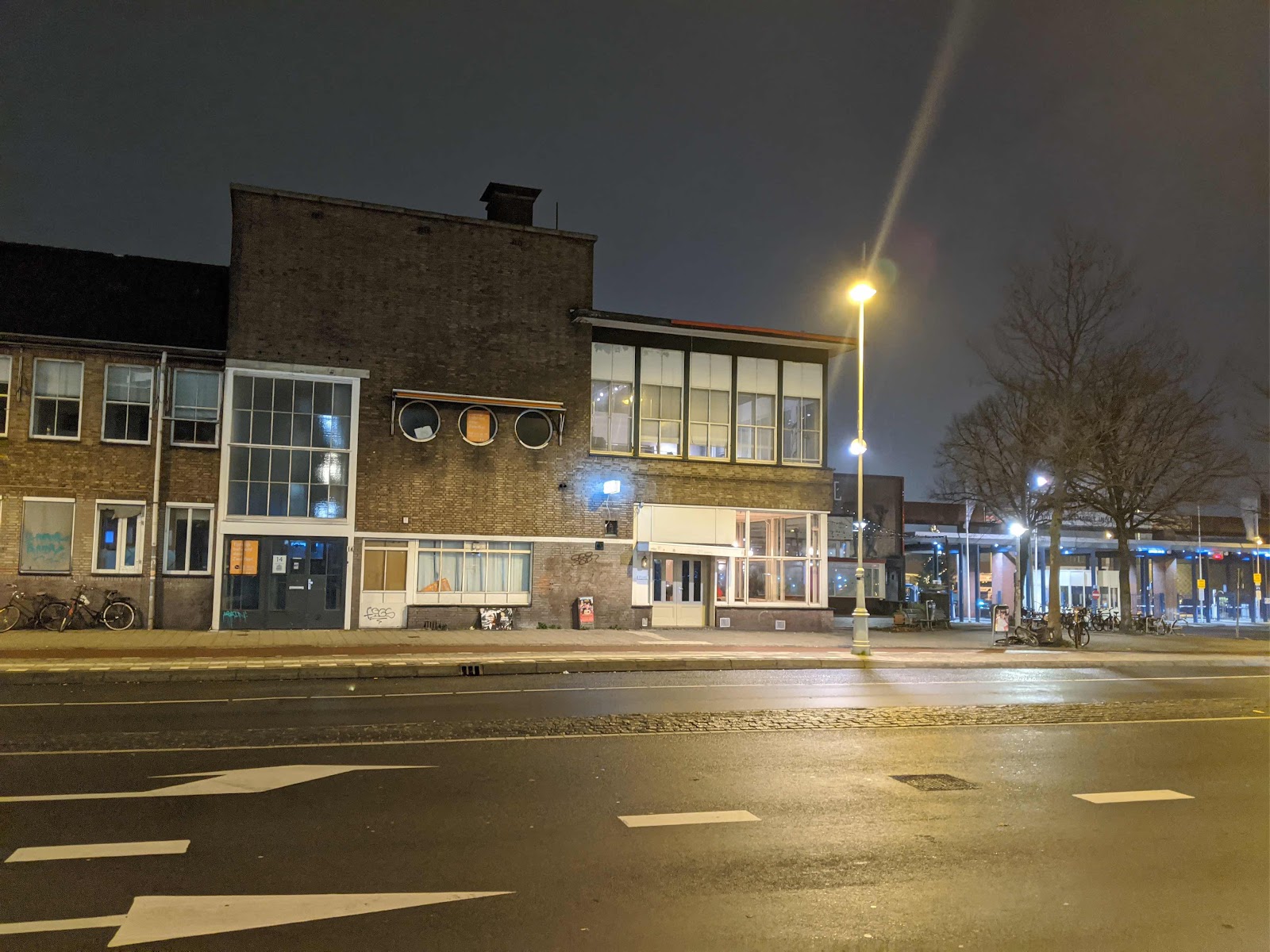 I should have taken some pictures of the inside — it is the most minimalist pub I’ve been in, to the point of being almost painful. A big open space with tile floors, 5 or so tables and a bar at one end. Two walls were windows so there would be lots of light during the day (but they are not open during the day). Old school folks would like that they had two turntables and were playing vinyl but the acoustics didn’t help. 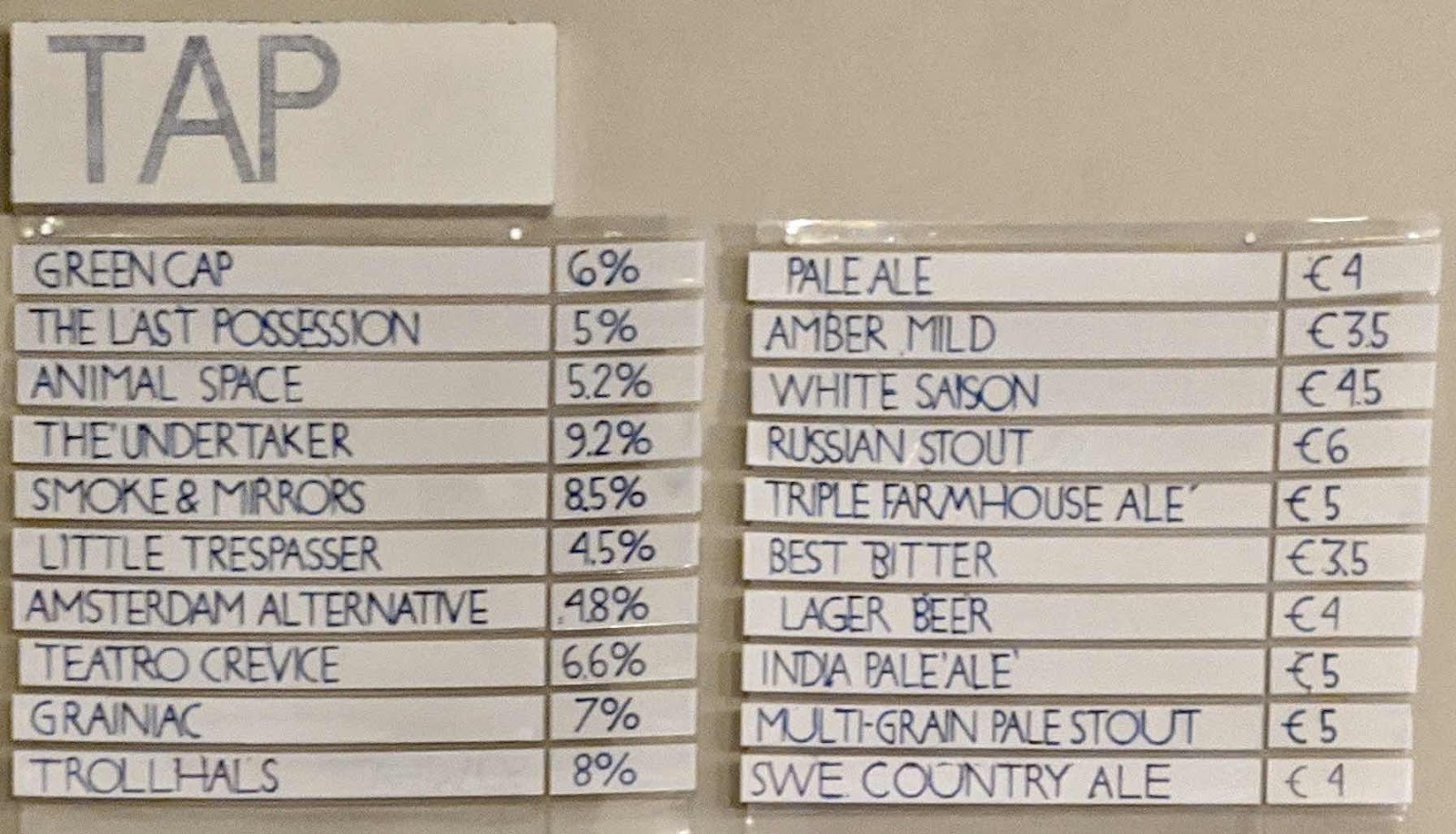 There were 10 beers on tap. I went with the Last Possession “Amber Mild” and Theo had the Little Trespasser Best Bitter. Theo’s keg was empty so there was a slight delay for his beer while it was replaced.
The designation “Amber Mild” provoked some discussion on Facebook. As is “what the hell is an Amber Mild.”  I took the “mild’ to mean it wasn’t all that hoppy (which it wasn’t). These days, I’d expect a beer marked simply as an Amber Ale to have bit more bitterness. So I didn’t mind the “Mild” qualifier. 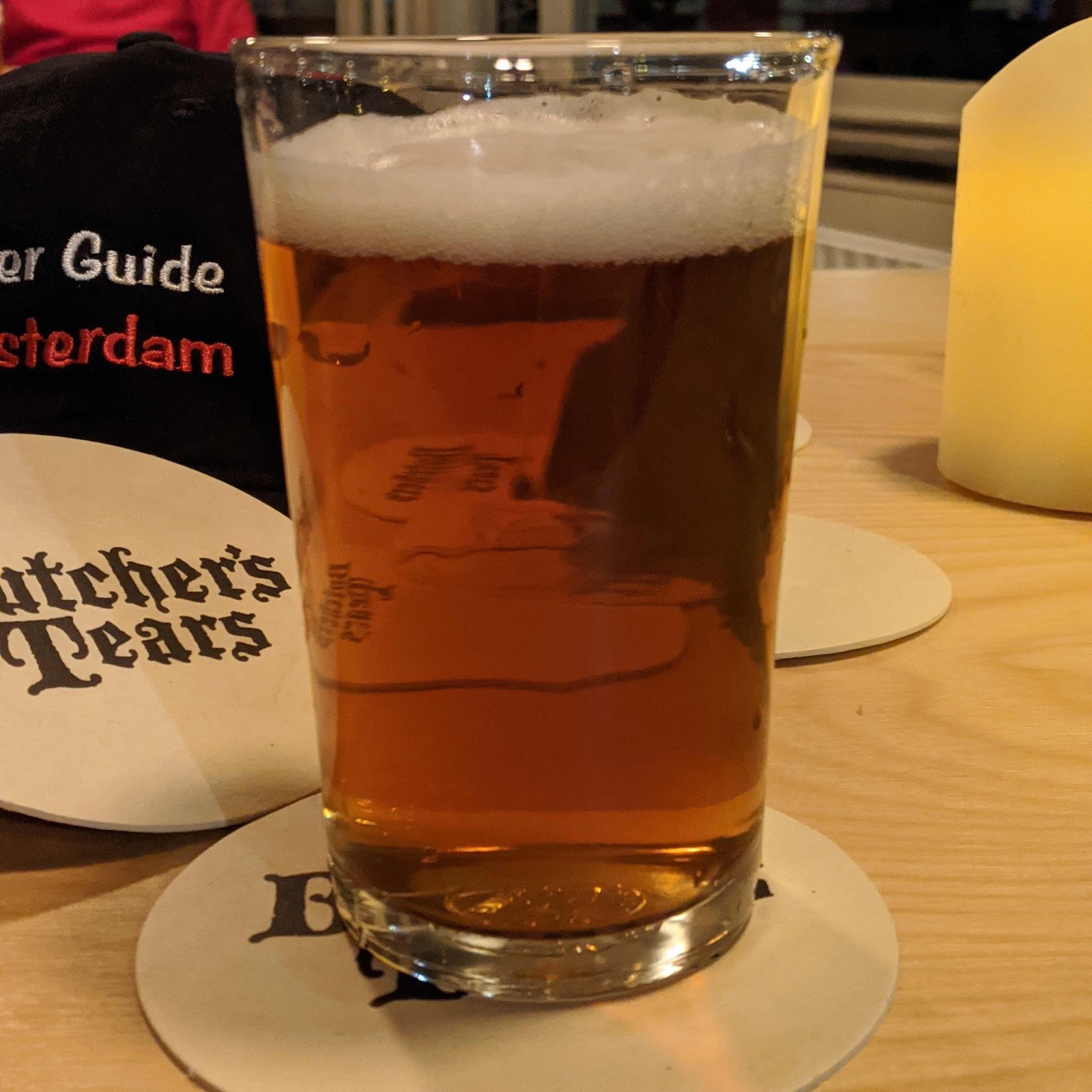 I enjoyed my beer, but Theo less so his. It had an unpleasant sour note to it — not something you’d expect is a “Best Bitter” and not the kind of sour you’d like in any beer.
I was feeling hunger and the only snacks they had were fries, so I ordered some with my beer. By the time they came, Theo had received is bad beer and was really ready to move on, but waited until I finished my beer and the fries. 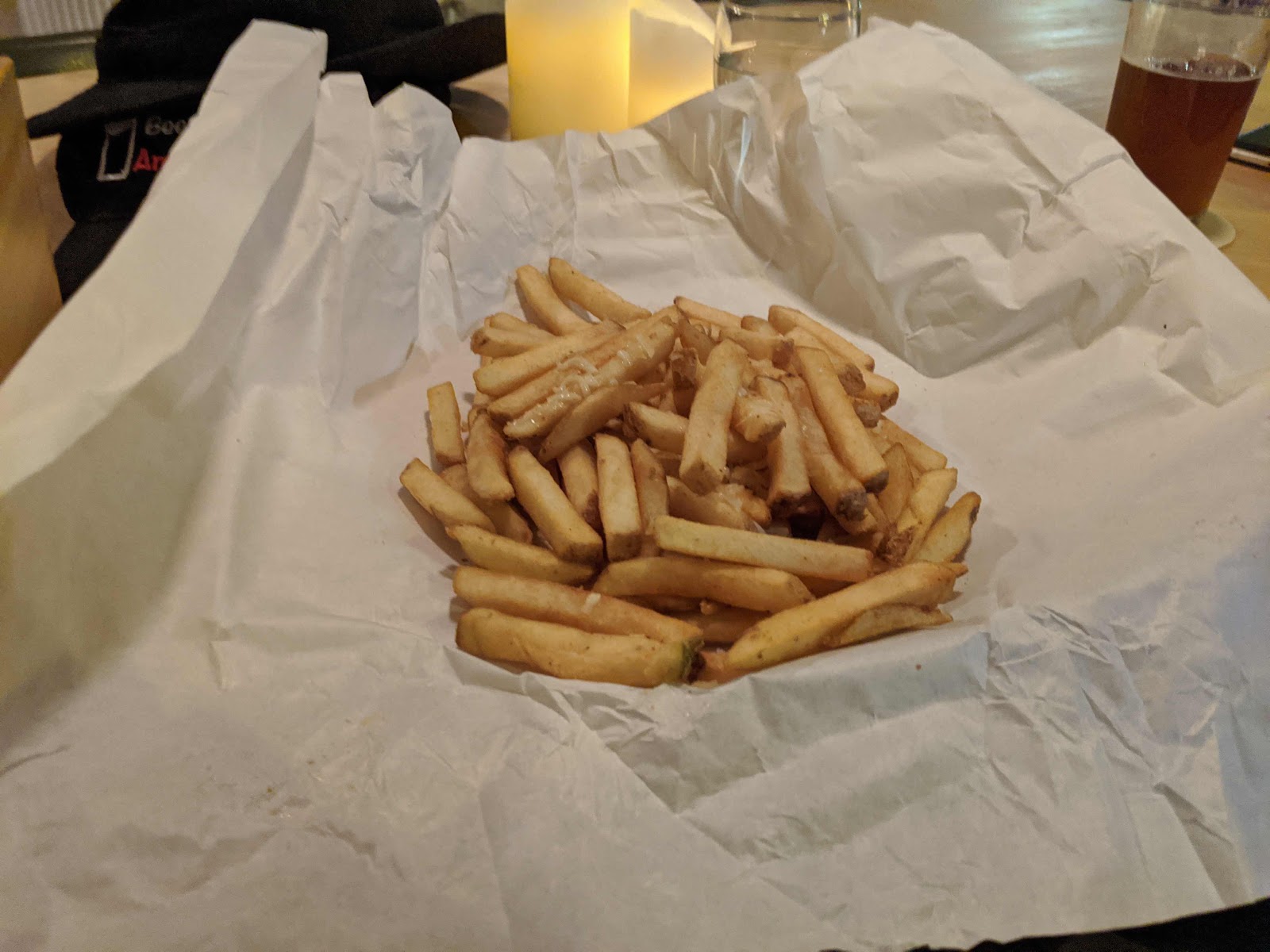 Theo wanted to go have some food at Asperius Brewing (or rather the restaurant Zest which is their taproom). I would have held off on the fries if I had known that as they were at that point a bowling ball in my stomachs. 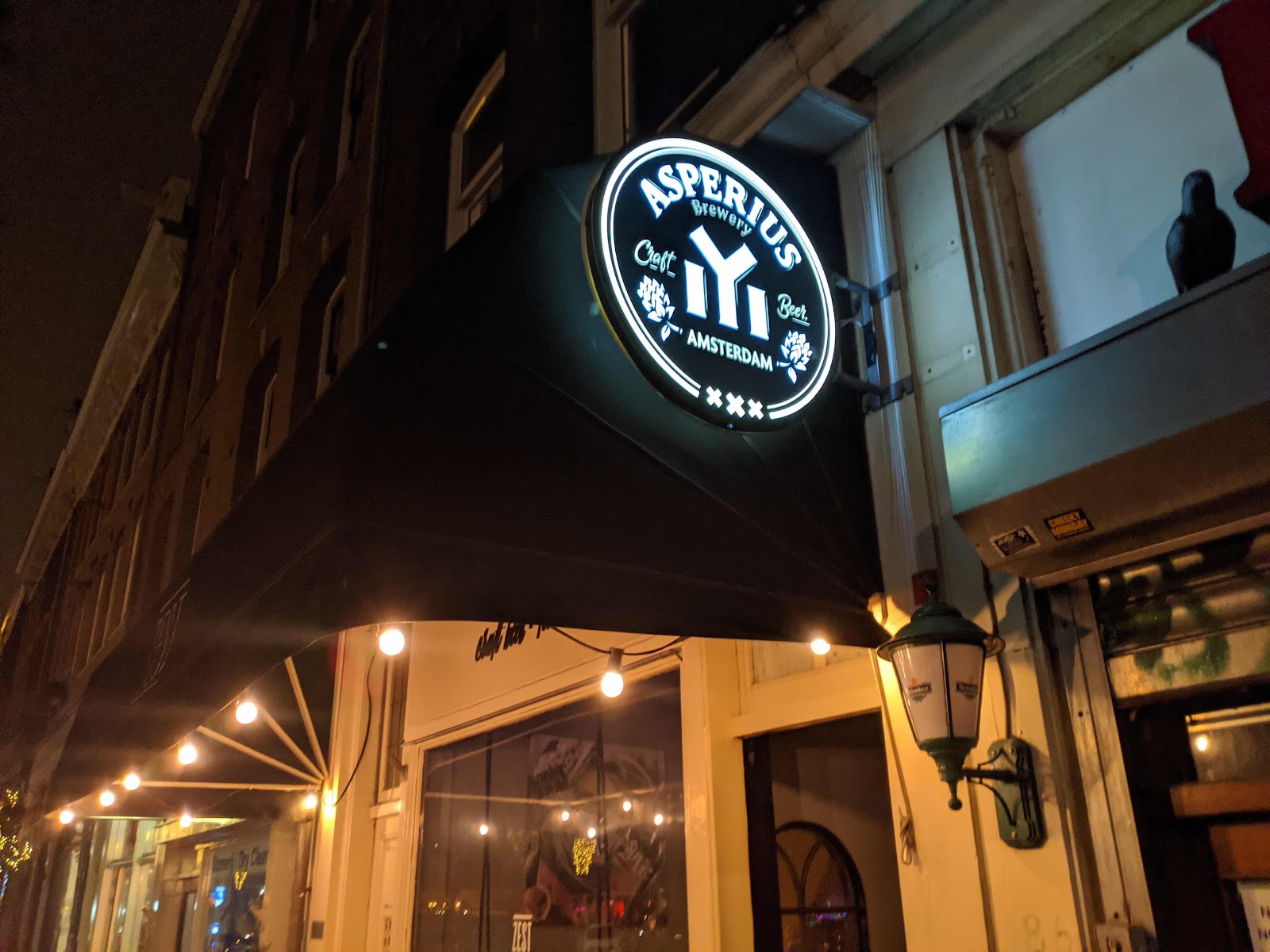 It turns out the only one of their beers that had on was an Imperial Stout which was more than I wanted at that point. So I ordered an Oedipus Mannenliefde, their Lemongrass saison. As always, a nice beer. 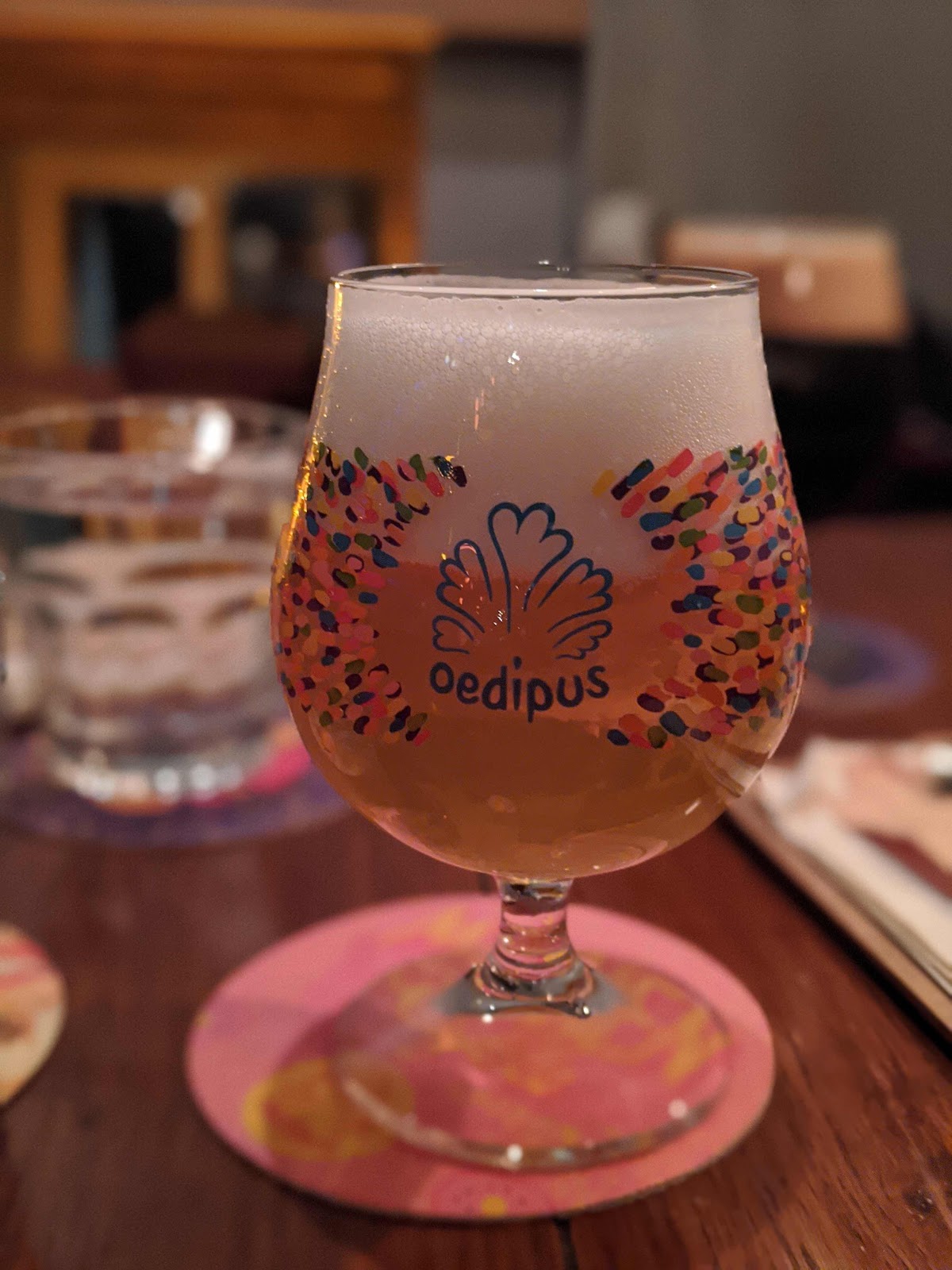 The fries were still a lumpen mass in my stomach, so I just had a bowl of their bean soup, which hit the spot. 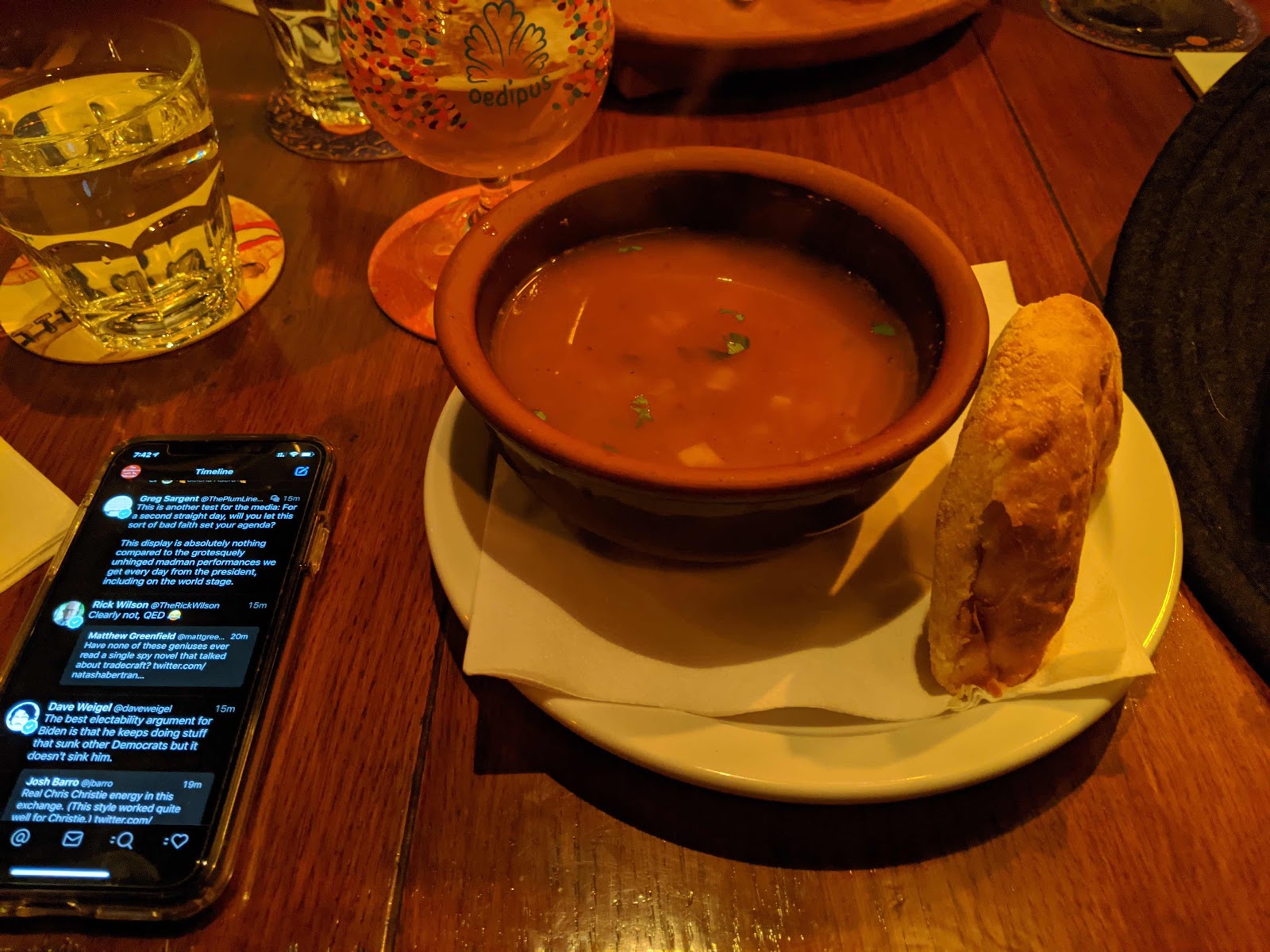 Jet lag was kicking in and I was starting to drift off at the table. So I left Theo (who I think was going to have another beer) and headed for the hotel.
Update: Jan, the brewer at Butcher’s Tears left a comment and I thought I’d update the post so it is more visible:

Hi Fred,
Michael Jackson would disagree about the hop acidity note in a bitter, especially highlighting it in his 'style' description:"BITTER - English term for a well-hopped ale, most often on draught. Although examples vary widely, the name implies a depth of hop bitterness. There is usually some acidity in the finish and colour vanes from bronze to deep copper. Basic bitters usually have an alcohol content of around 3.75-4 percent by volume, "Best" or "Special" bitters come in at 4.4 - 7.5, the odd "Extra Special" at about 5.5."About the Amber Mild. It's inspired by turn-of-the-century English X ales/milds which were stronger than their modern counterparts. Unfortunately the term Amber Ale as been fully usurpy by US style brewing in The Netherlands, therefore the fallback to the mild.

Hi Fred,
Michael Jackson would disagree about the hop acidity note in a bitter, especially highlighting it in his 'style' description:

"BITTER - English term for a well-hopped ale, most often on draught. Although examples vary widely, the name implies a depth of hop bitterness. There is usually some acidity in the finish and colour vanes from bronze to deep copper. Basic bitters usually have an alcohol content of around 3.75-4 percent by volume, "Best" or "Special" bitters come in at 4.4 - 7.5, the odd "Extra Special" at about 5.5."

About the Amber Mild. It's inspired by turn-of-the-century English X ales/milds which were stronger than their modern counterparts. Unfortunately the term Amber Ale as been fully usurpy by US style brewing in The Netherlands, therefore the fallback to the mild.

Unfortunately this beer was to sour to enjoy
The style descriptions 2019 from the Brewers Association don't mention any sourness: