First stop of the day was De Pilsener Club, a hole in the wall brown cafe that looks like it hasn’t changed in decades. 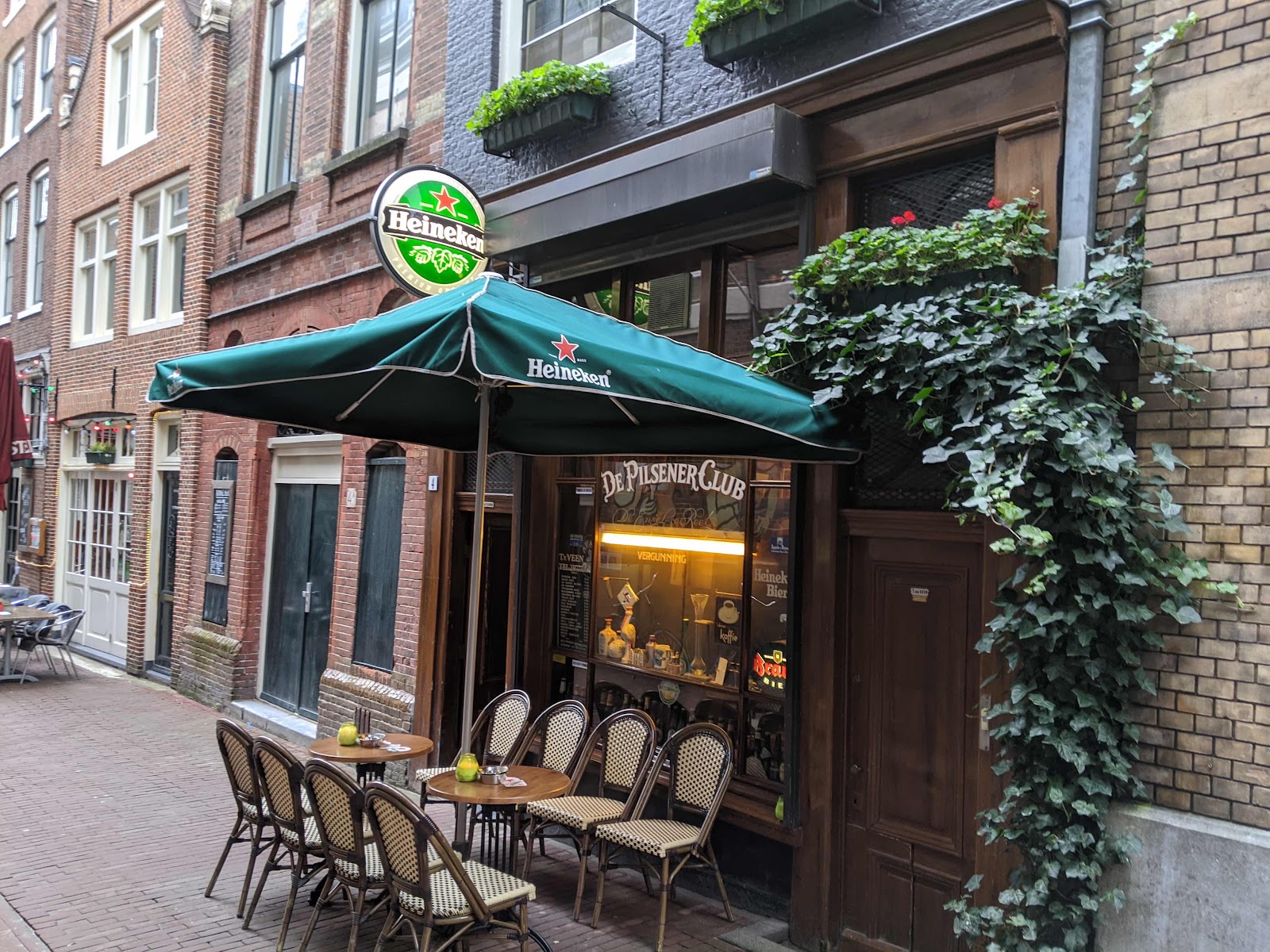 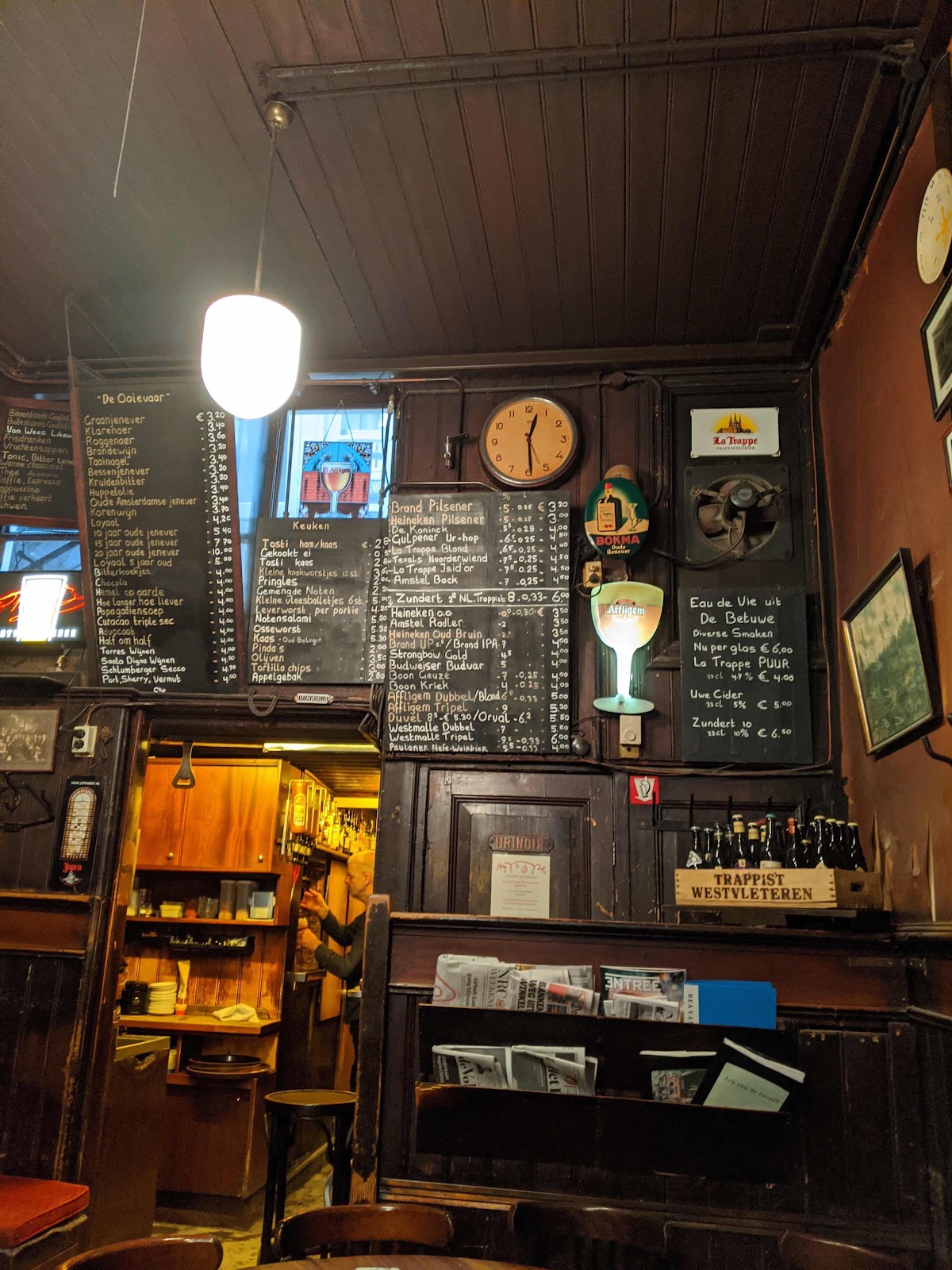 There are eight beers on tap and I’ve always found something interesting to drink. A fairly extensive bottle list as well. 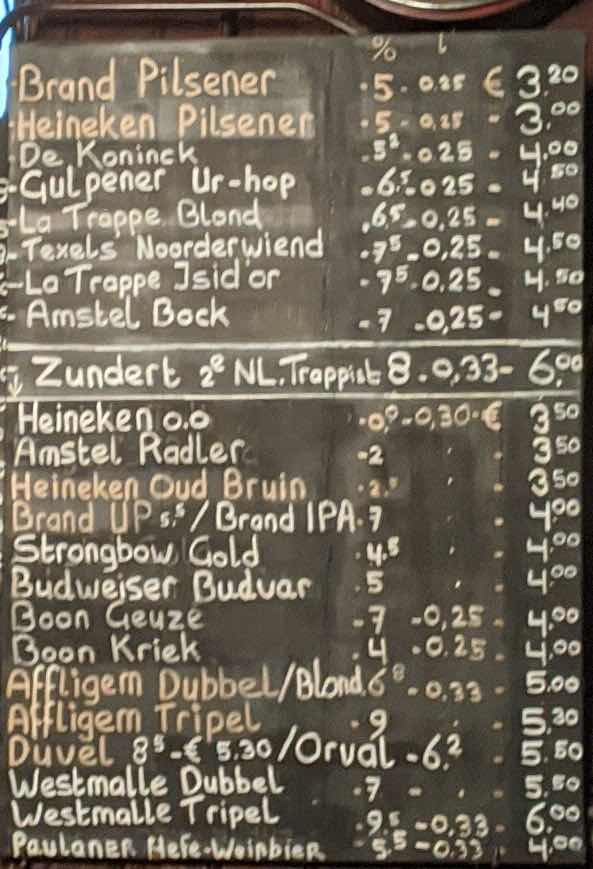 I went with the La Trappe Isid’or. This was a beer they brewed for one of their big number anniversaries (forget which) and it proved so popular they added to the regular lineup. 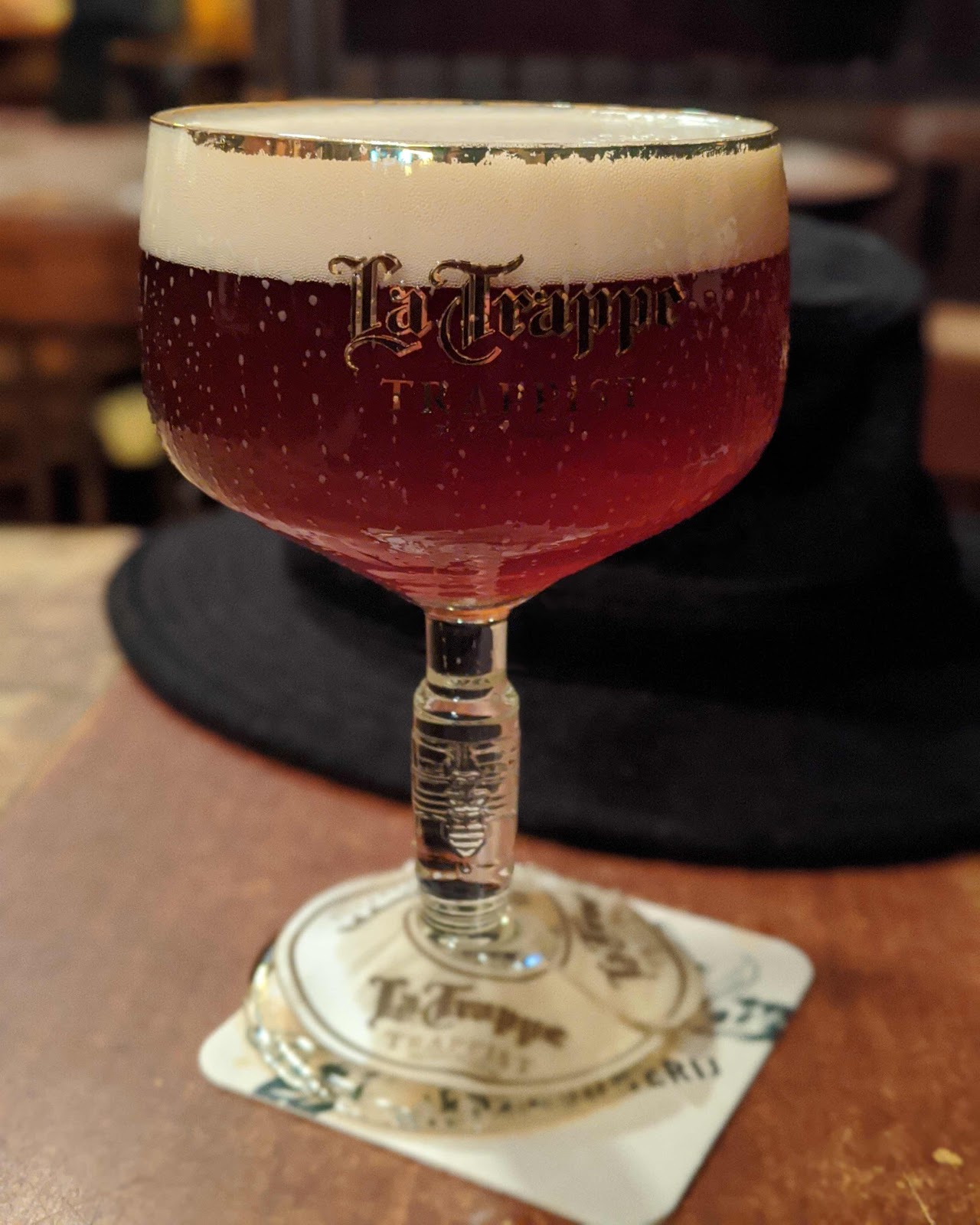 If you come here with friends, plan on talking to each other because there is no WiFi and the cellular signal is pretty crappy as well.

They have beers from the other Dutch Trappist brewery, Zundert. I think the Zundert 8 is nothing special but I really liked the one time I had the 10 (was at the De Pilsener Club last year) so I ordered one. 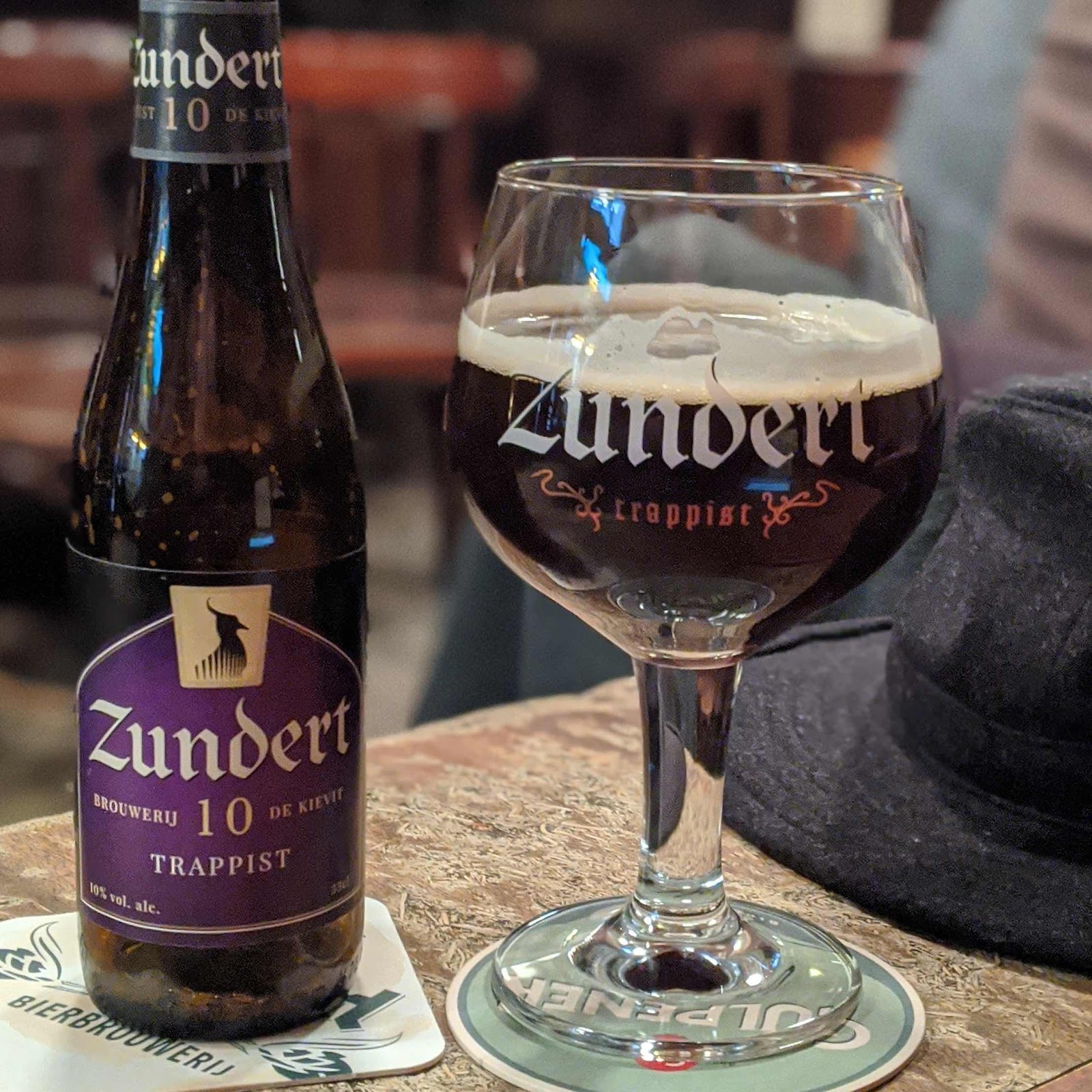 I figured this would be a mistake, a 10% beer for lunch makes me want a nap in the afternoon, but what the hey, it is for a good cause.
They also have Osseworst from a renowned local butcher. I had some so I wasn’t drinking the 10 on a totally empty stomach. Osseworst is basically beef tartare with sausage type spicing. This was very good but I understand it is not for everybody. 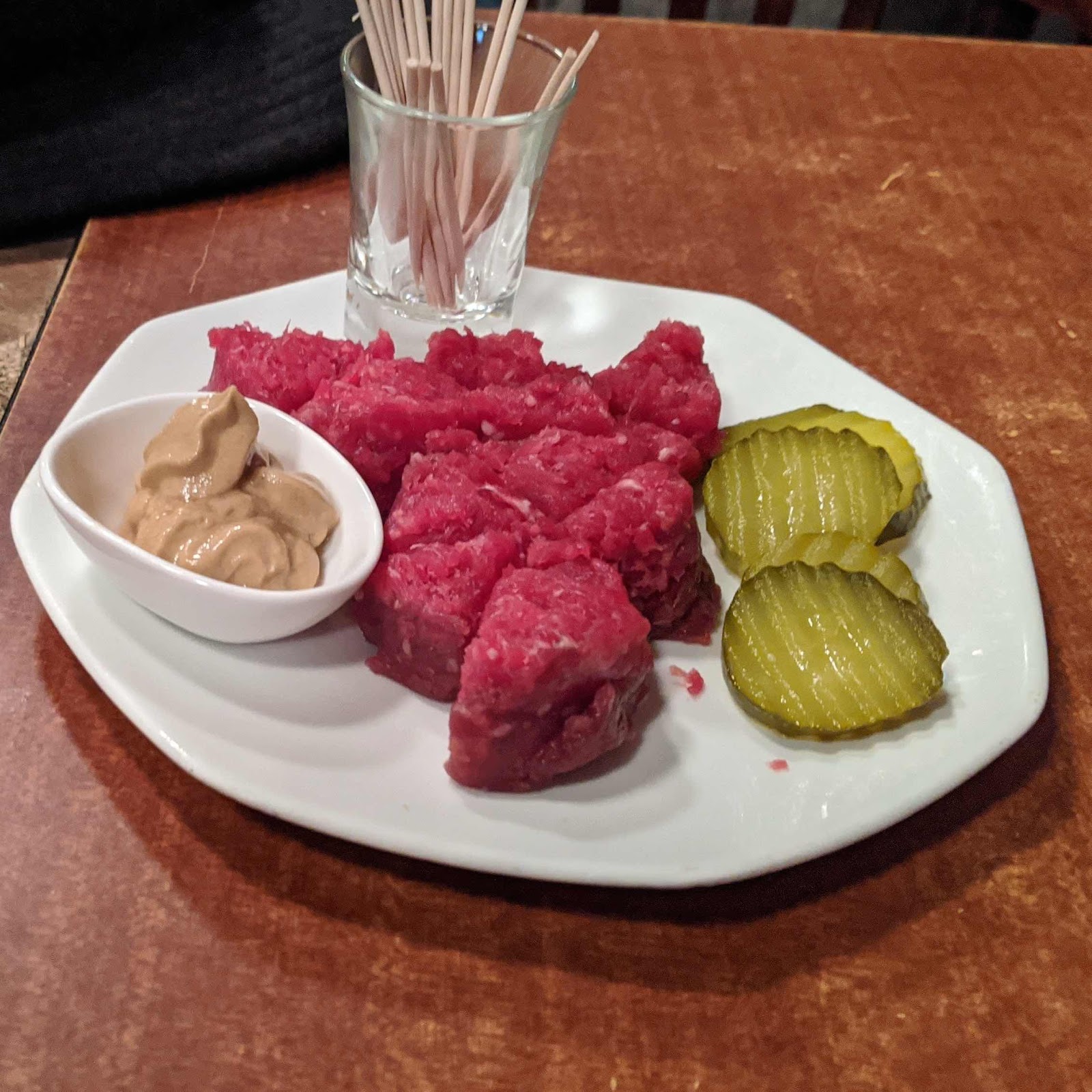 I decided next to check out one of the newer Gollem pubs, Gollem Aan Het Water. I was by last year but the opened late that day and I didn’t want to wait around. It was a tram ride and the a walk around the Artis park. I love how they have modern built “old fashioned” bridges over some of the canals. This was is basically for pedestrians and cyclists, though I suppose a car could cross it if it had to. 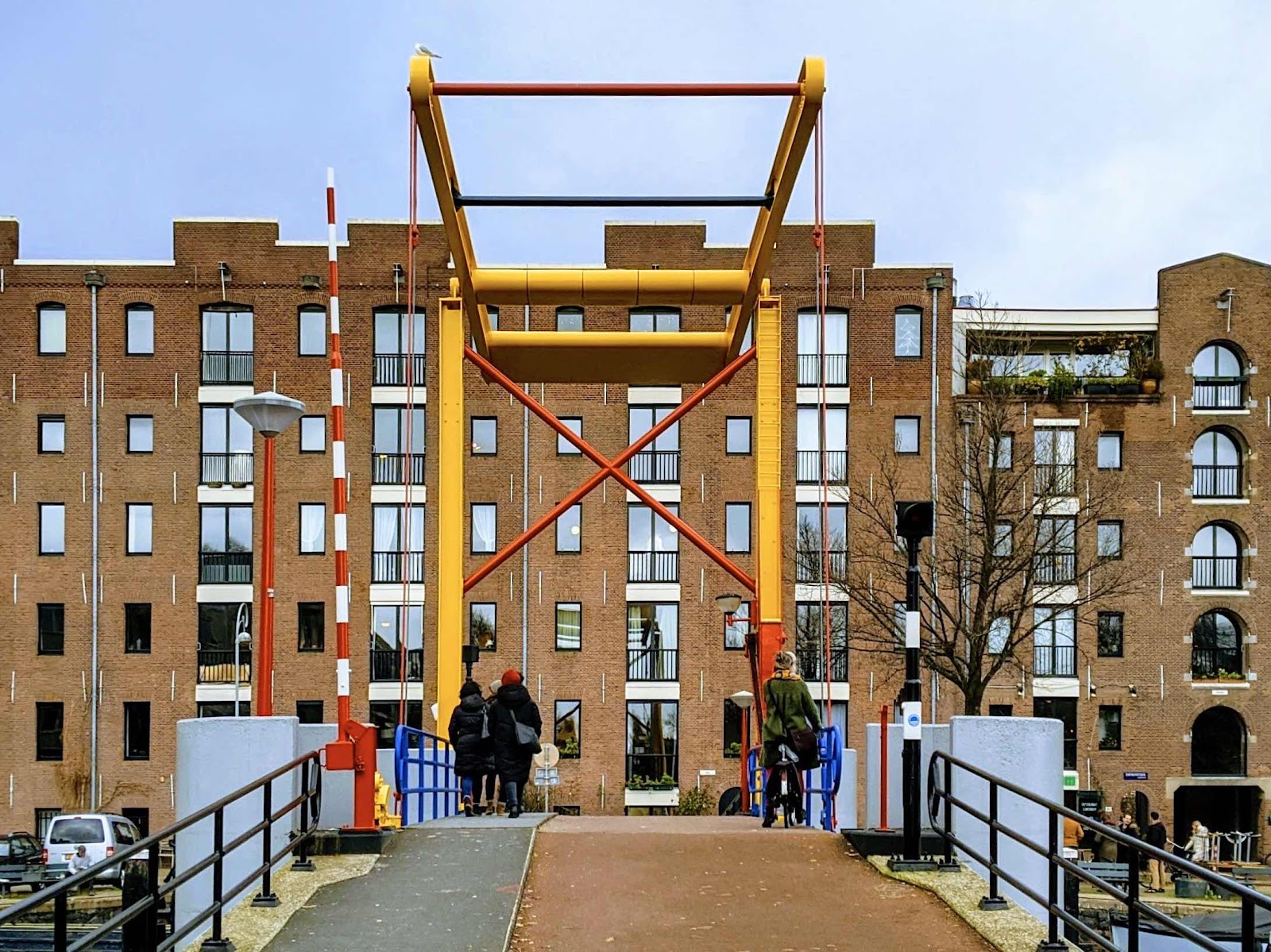 I find most of the Gollem pubs to be dark and gloomy. This is the exception. If it weren’t for the taps and the branding I wouldn’t think it was a Gollem pub at all. It really has more of a neighborhood vibe. 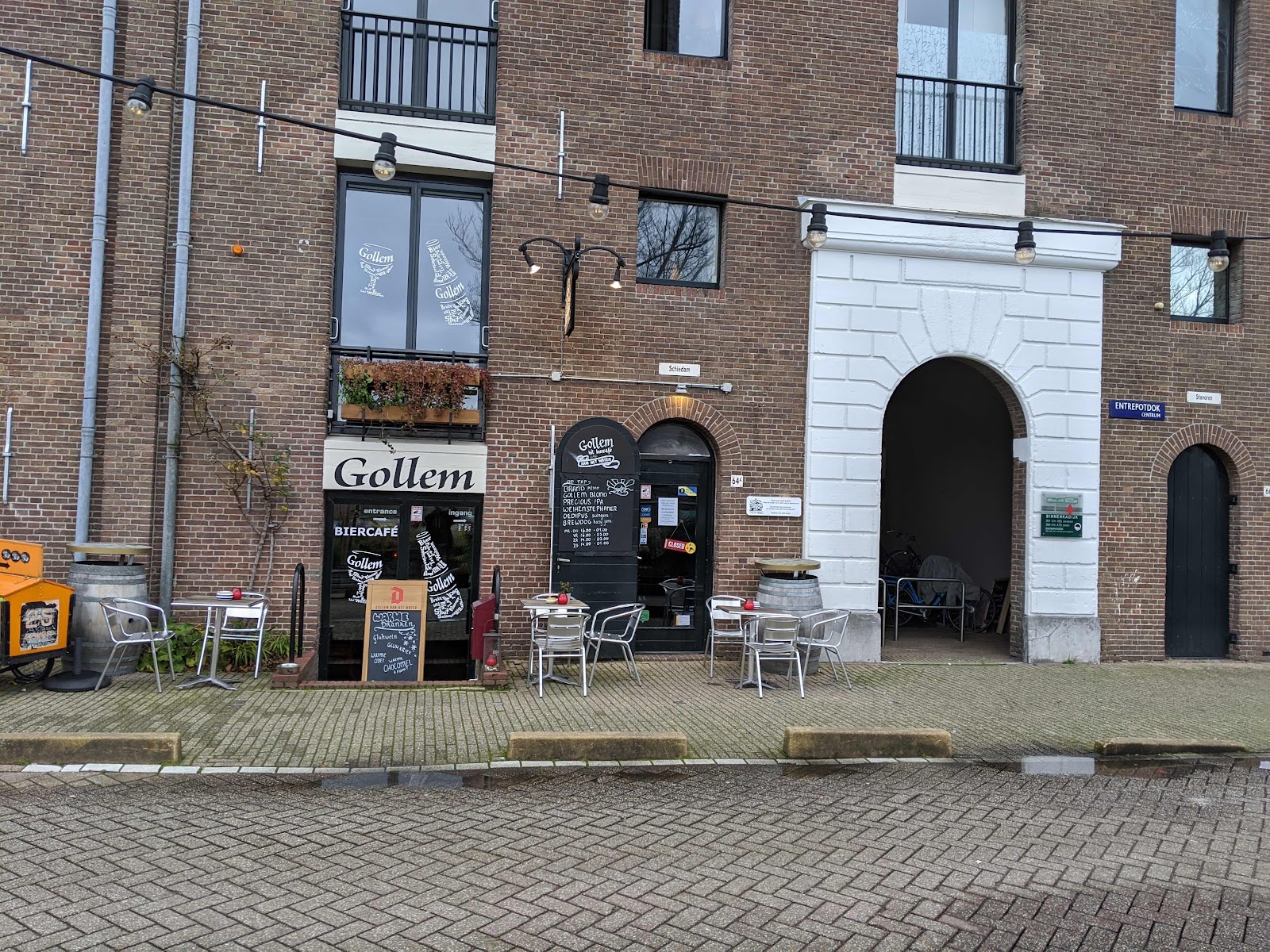 They only have six taps but the bottle list is fairly extensive. On the menu they identify Amsterdam brewed (or at least Amsterdam based) breweries, which is a nice touch.. 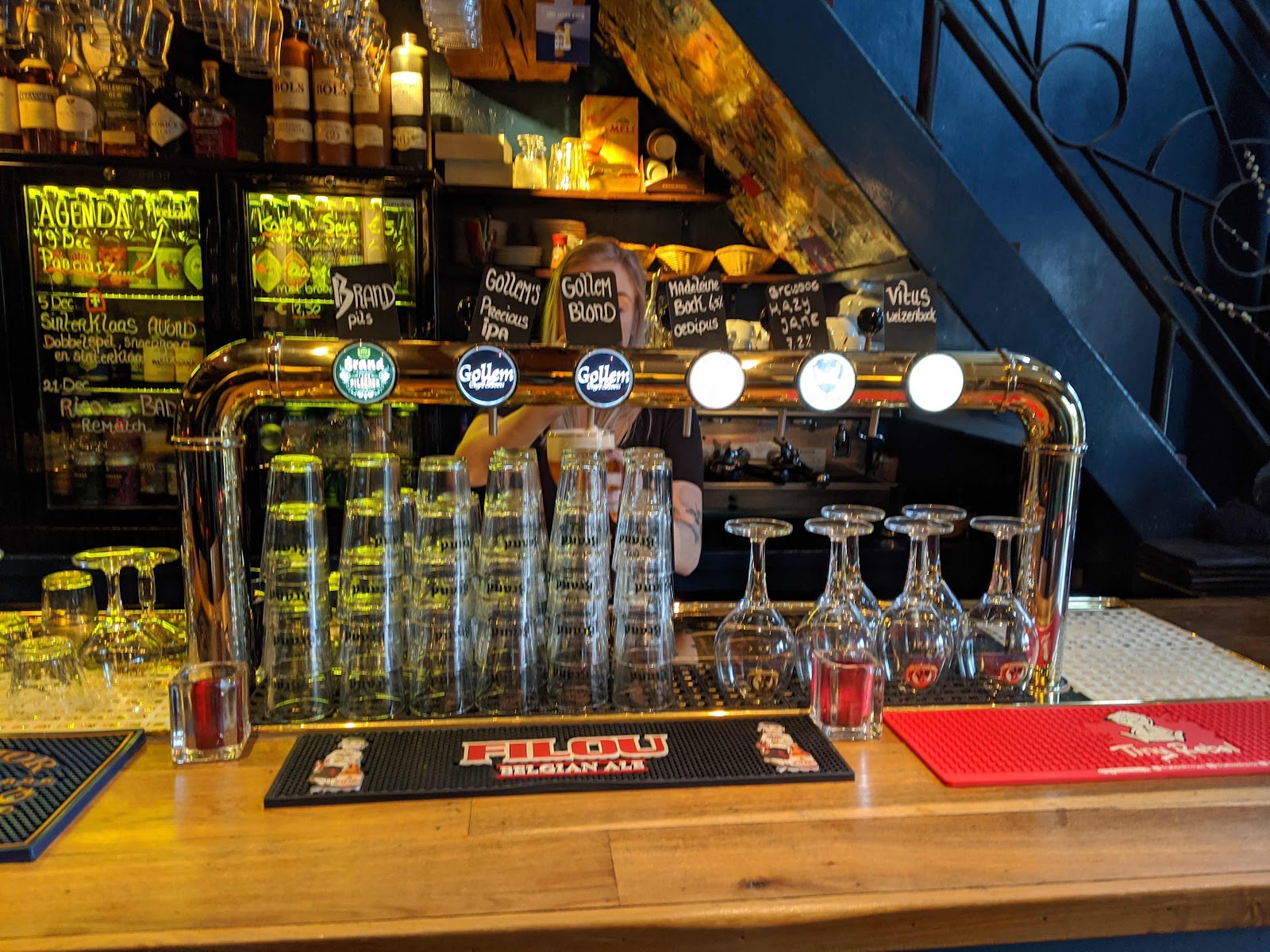 I ordered the Gollem Blond, a beer I don’t think I’ve had before. I believe their beers are made by Troubadour (Brouwerij The Musketeers) in Belgium. 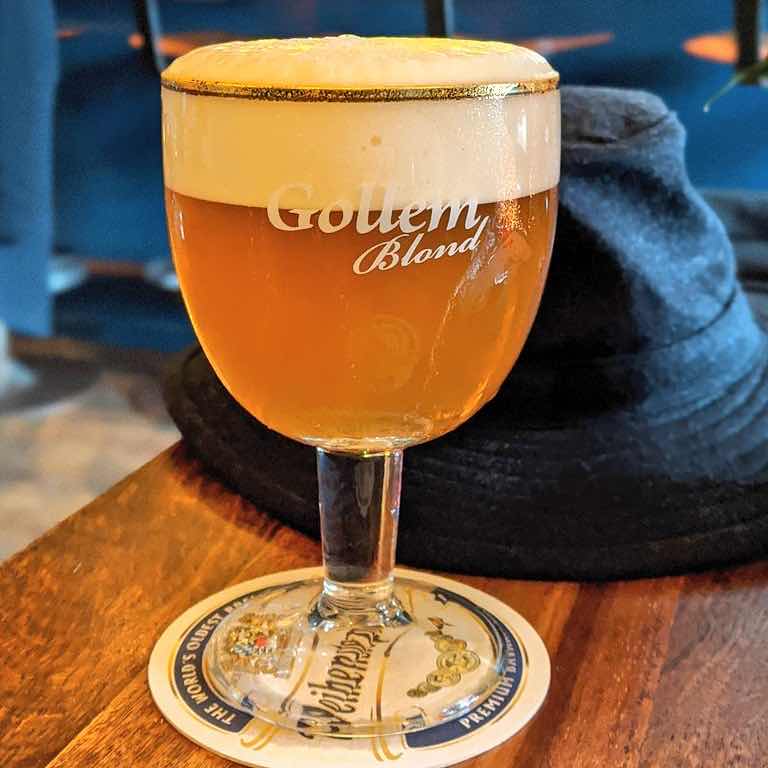 The beer was quite nice and I’d order it again.
Next I ordered a bottle from the Bird Brewery, Datisandere Koekoek Saison.  Nothing much to say about it, a perfectly fine saison. 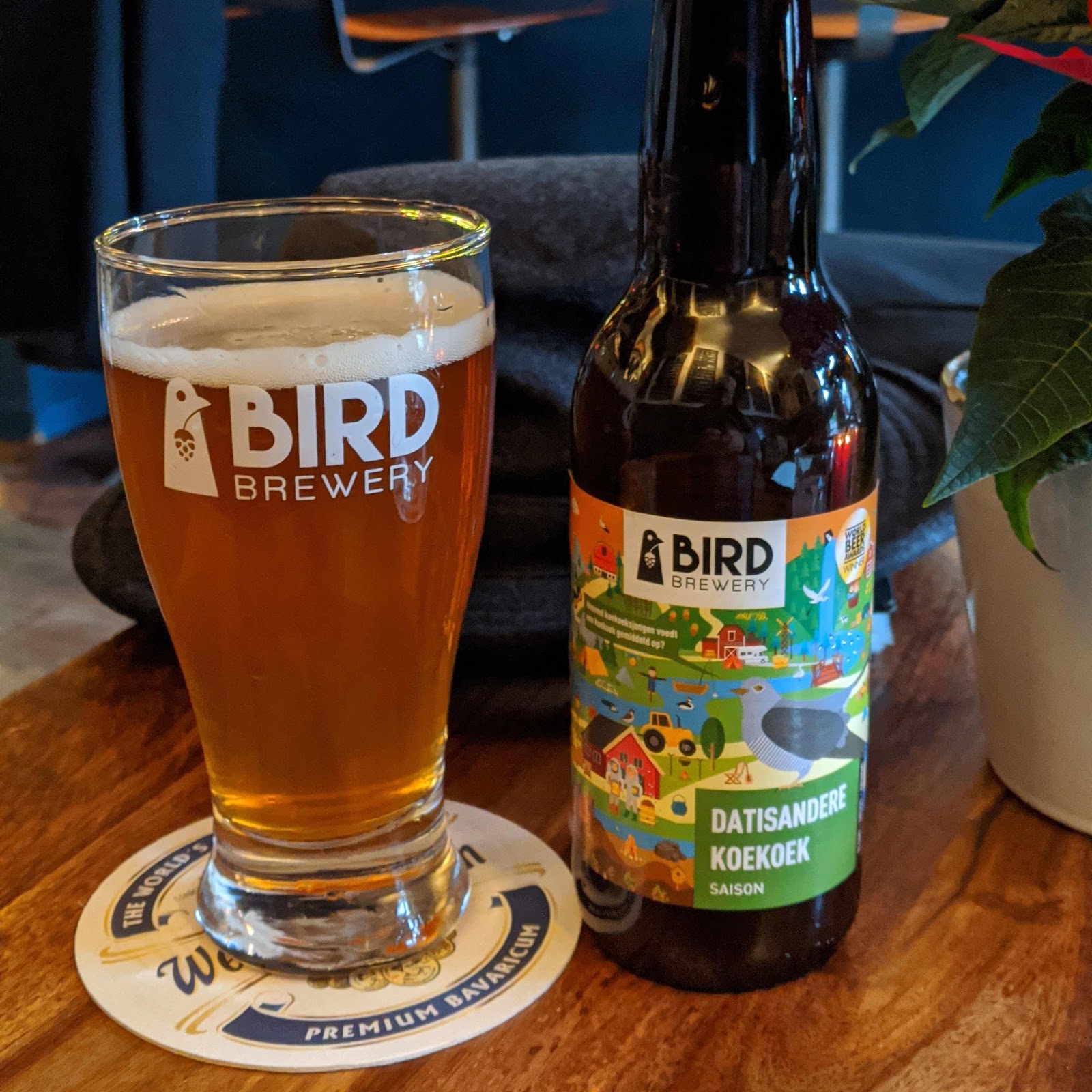 I ordered Three Cheese Flammkuchen (think flatbread pizza) to go with the beer. 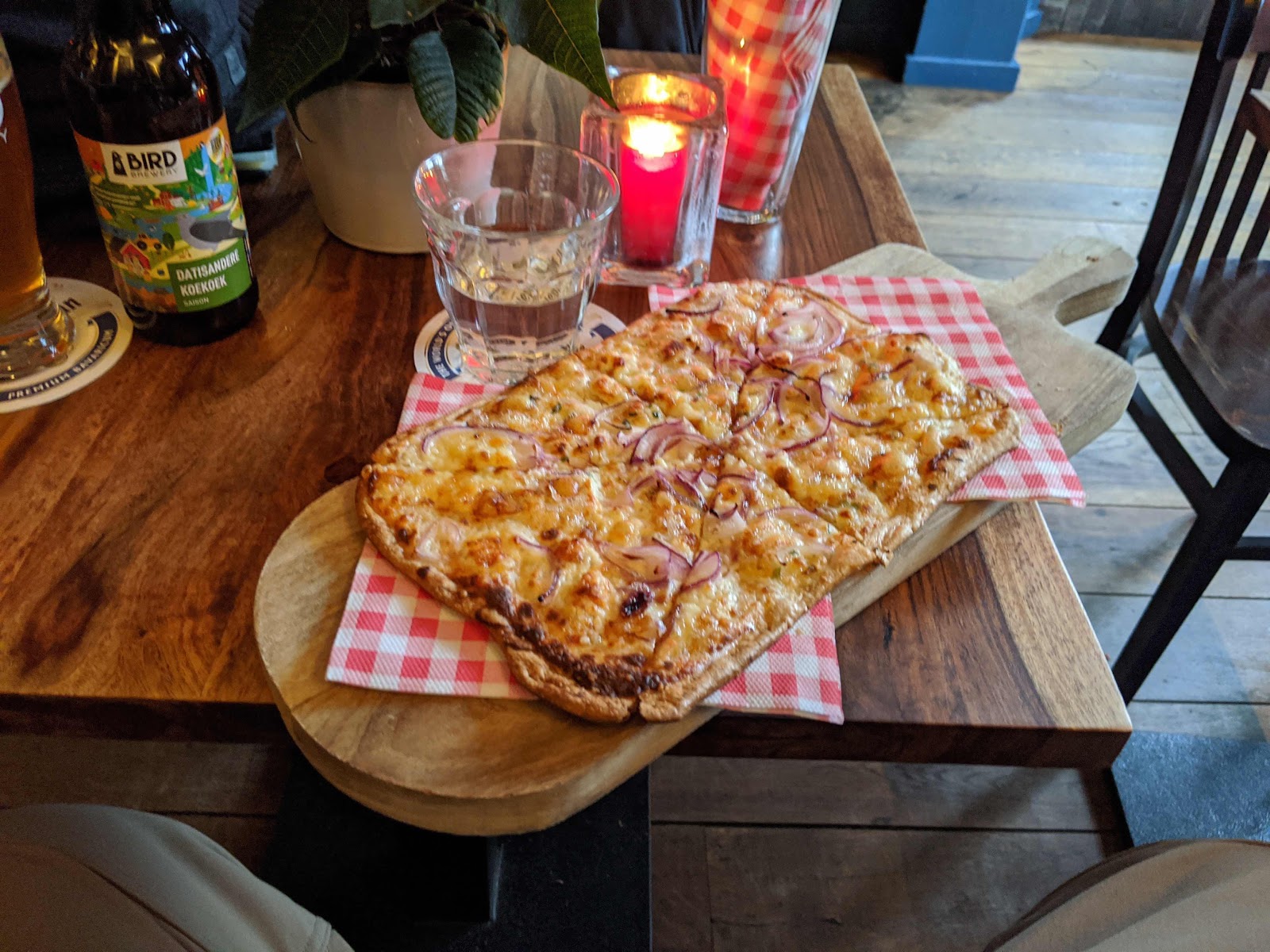 Even with the snack, I could feel the need for a nap coming on so it was time to move on. The area the pub is in was somewhat recently a commercial dock so there is a big crane by the canal. The sky wasn’t that color — I applied one of those “artistic” filters to give it this look. 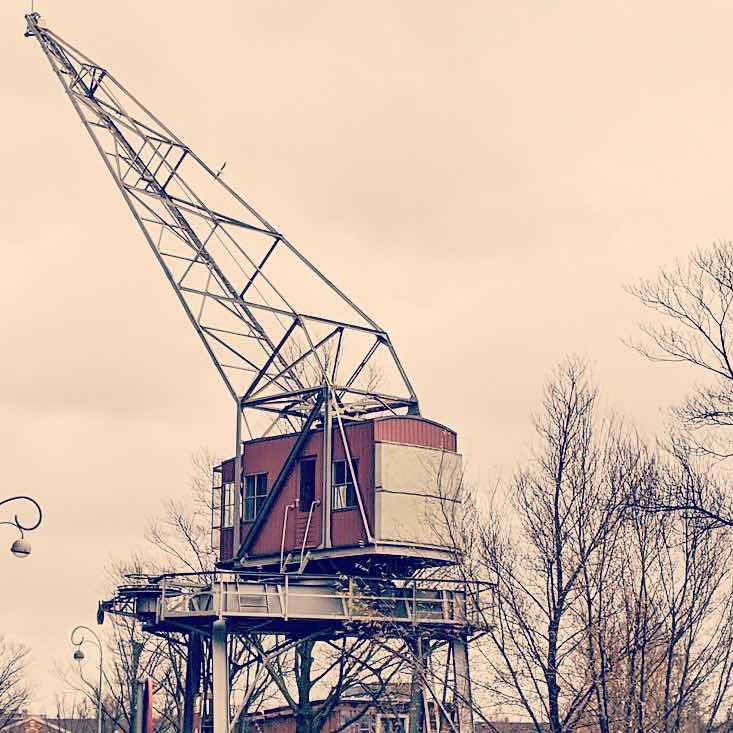 I had to cross another new/old fashioned bridge (the Pelikaanbrug) to get to my bus stop. 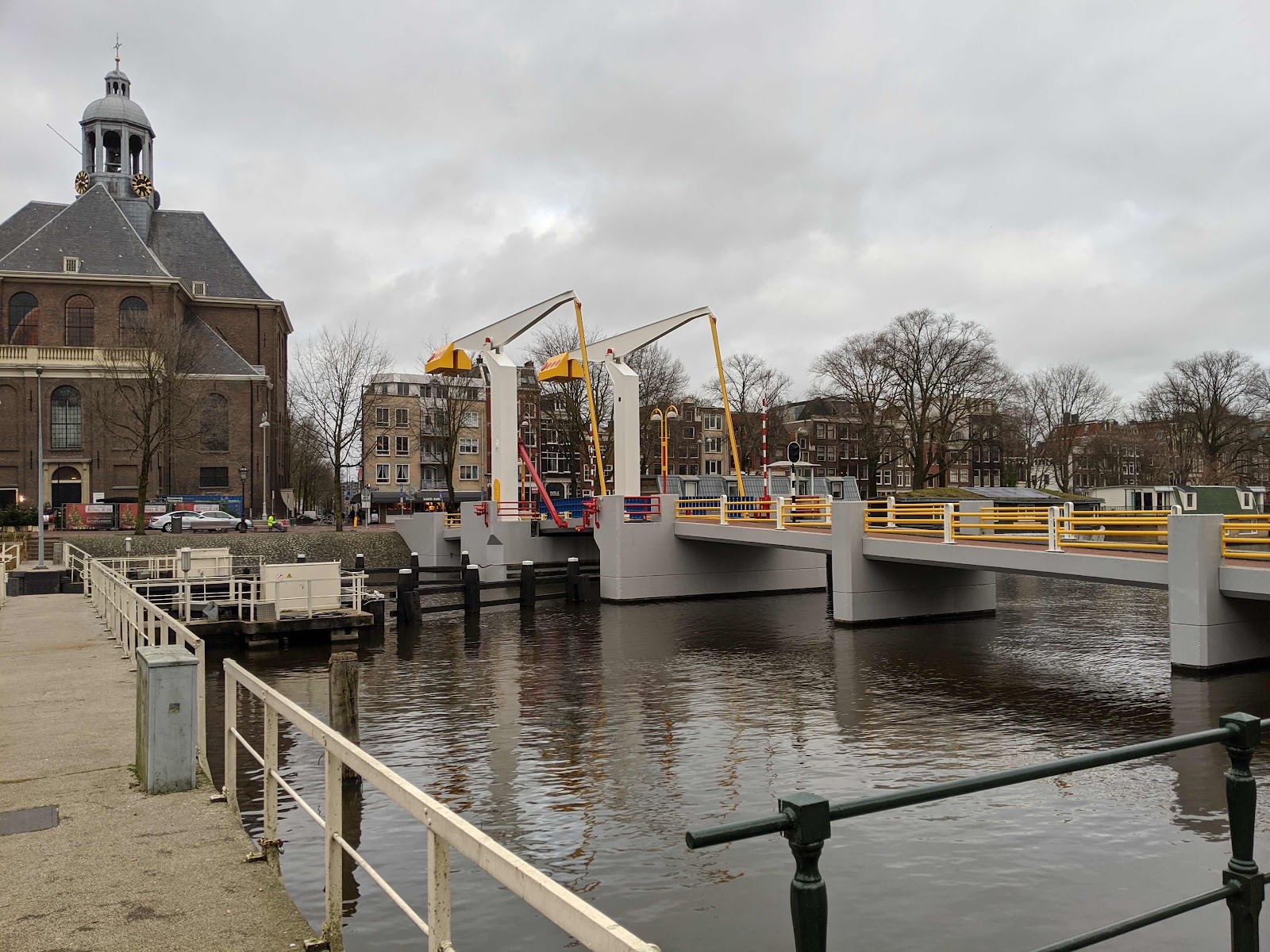 After a bus ride crosstown and a walk I arrived at JD Williams Whisky Bar. 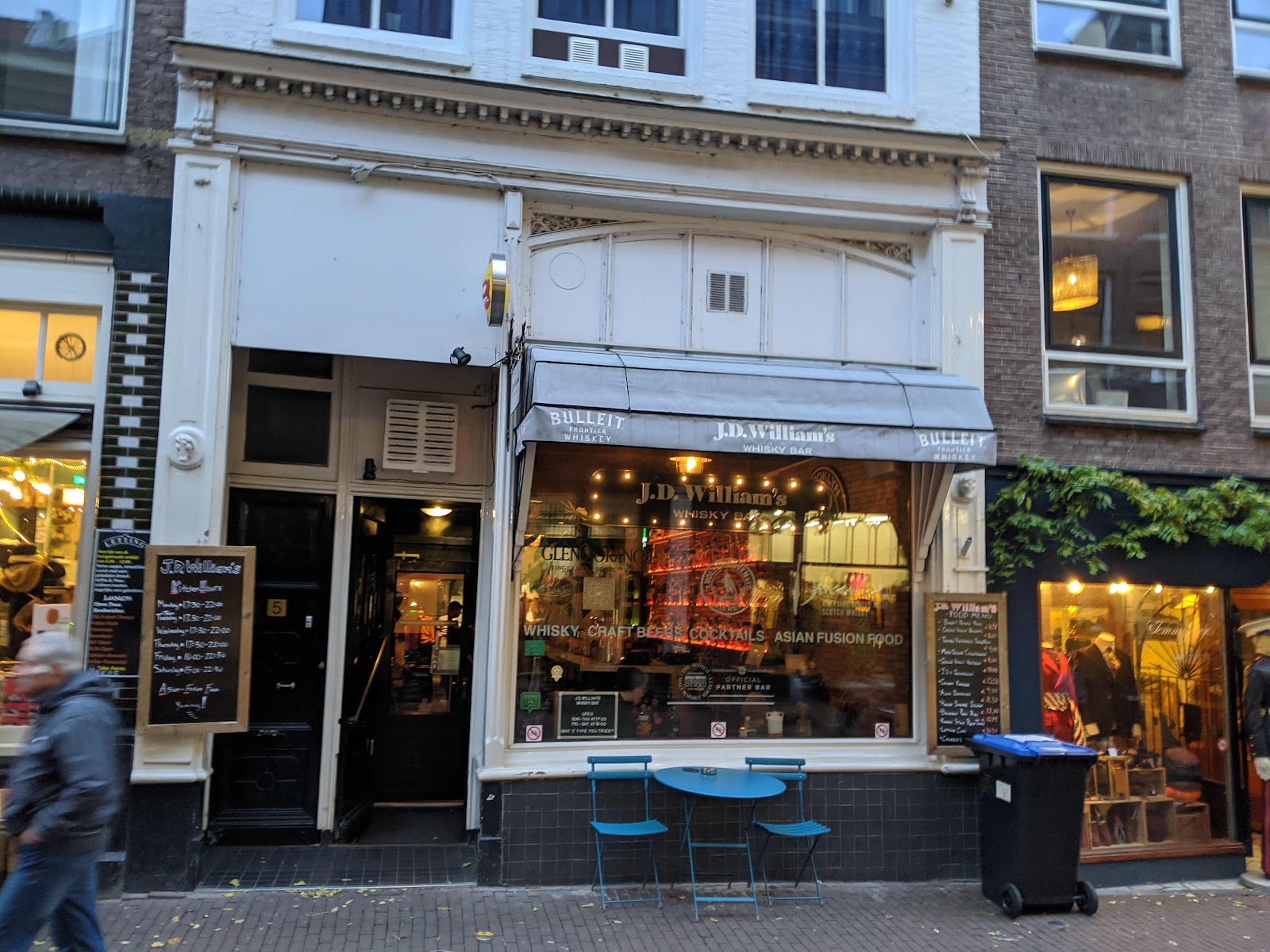 They have eight taps but only seven beers were on. I was surprised by the number of American beers. Not so good for me but good for locals (and non-American tourists, I guess). 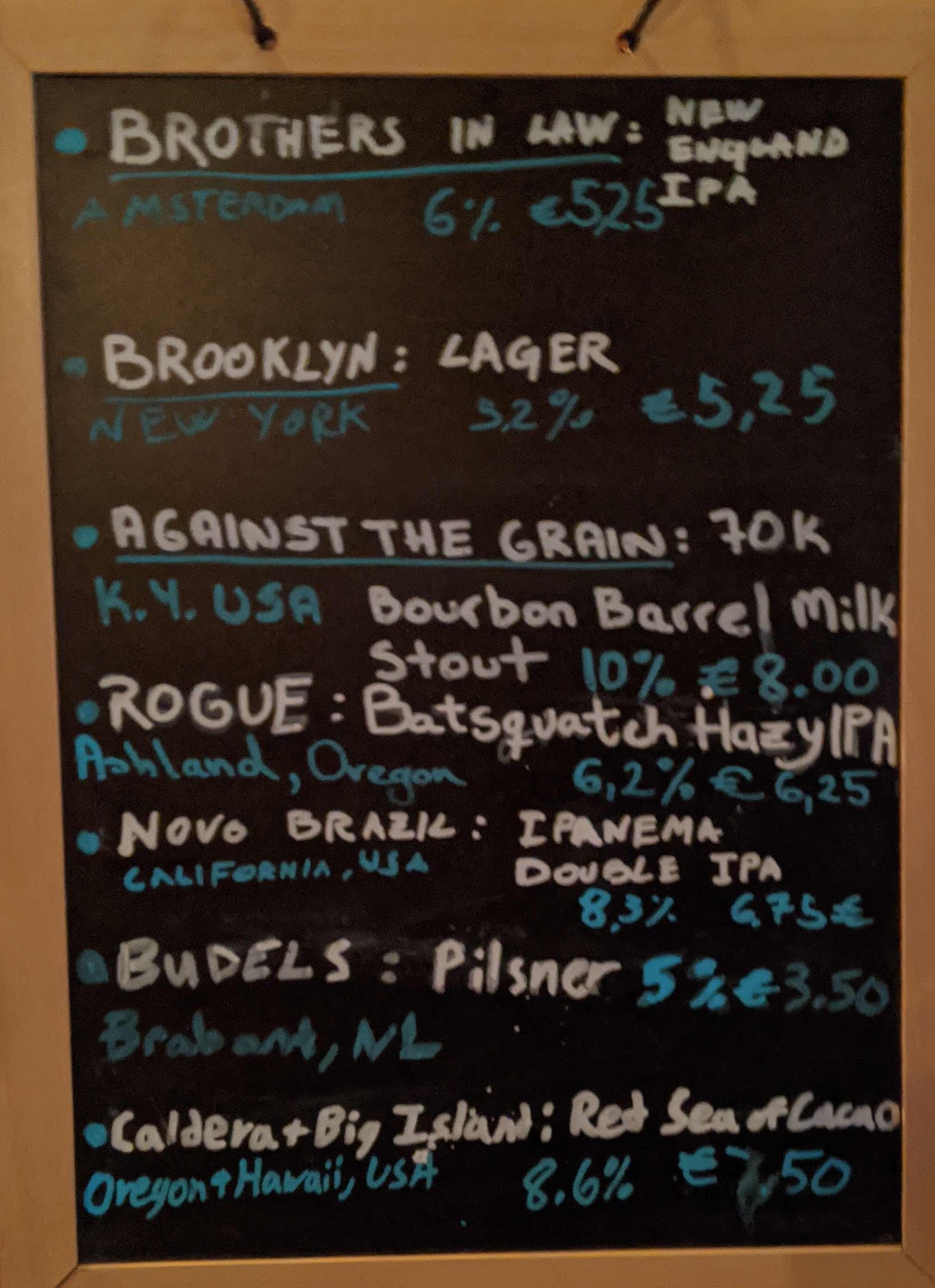 As is common in Amsterdam, the Gents is not on the main floor, either up or down some usually steep stairs. The stairs here were even worse than the ones at In De Wildeman. Really not much more than a ladder! 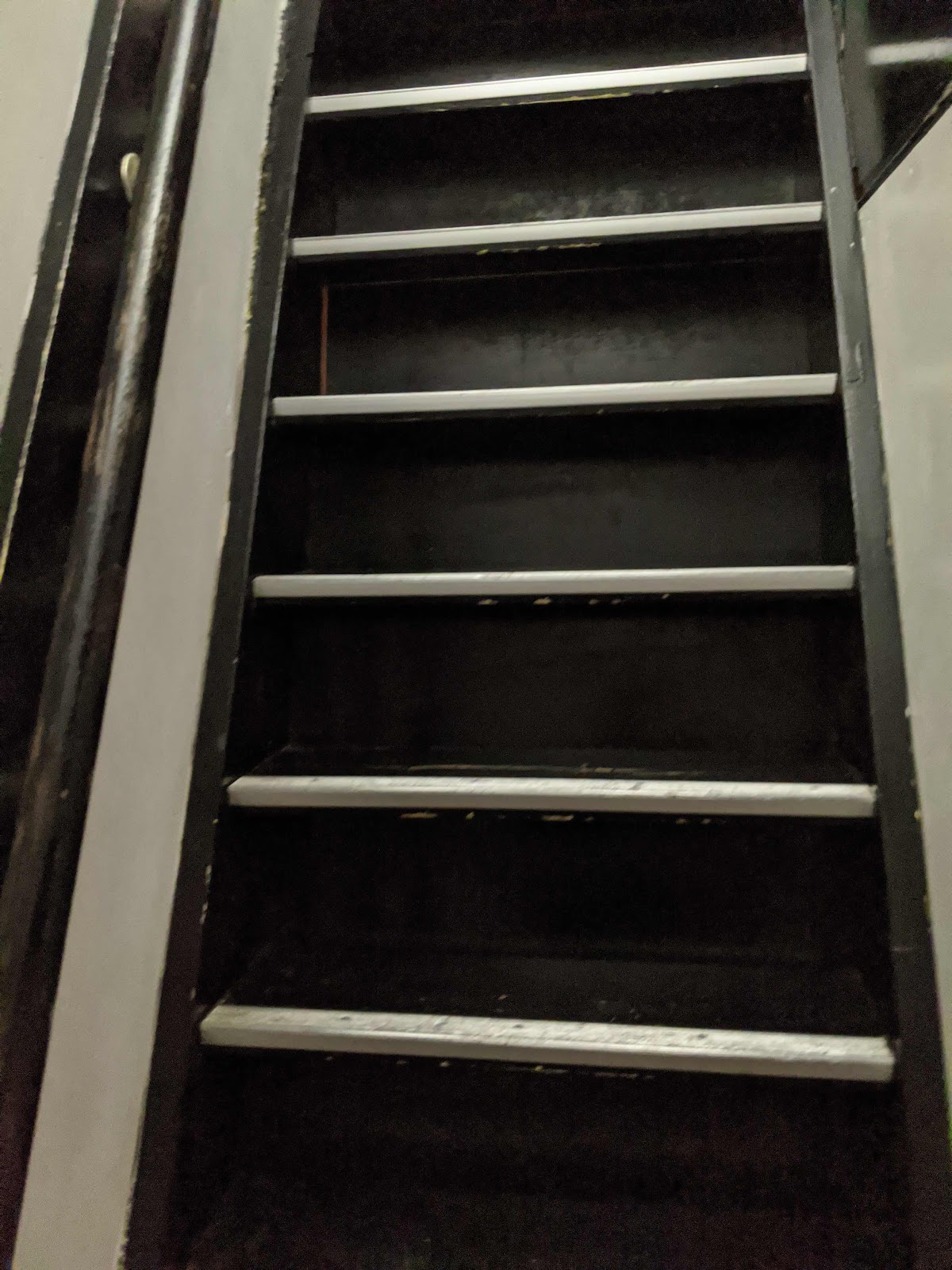 No, that is not a glass of orange juice: I went with the Brothers-in-Law NEIPA as the the only Dutch “Craft” beer. It’s not my favorite style, but this one was quite nice. The bartender tried to get me to try a shot of a Dutch Rye Whiskey, but I was able to fend him off. 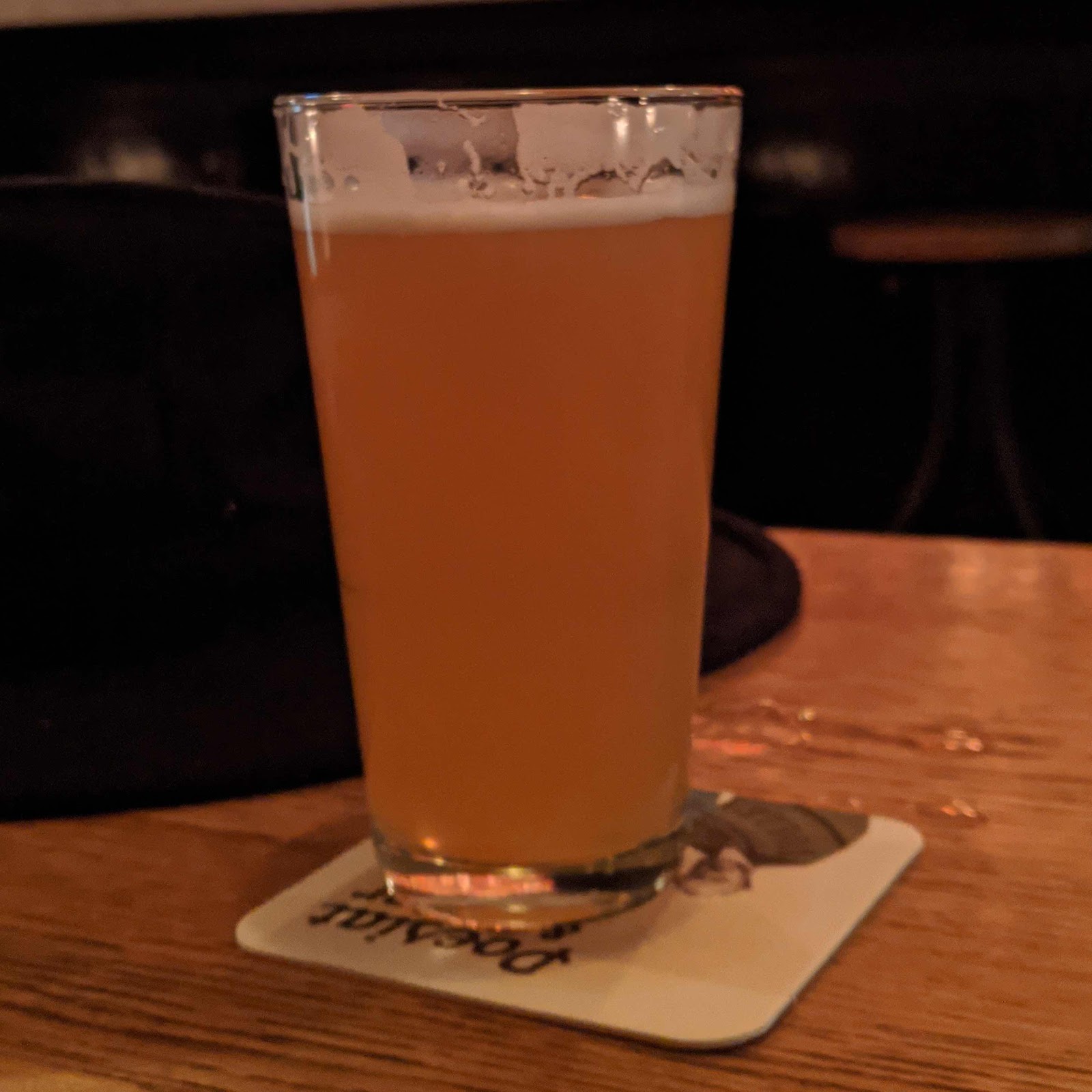 Since I had the one beer I wasn’t interested in and was not about to start on their extensive collection of spirits, I moved on.  As I was headed for my tram stop a sign caught my eye. 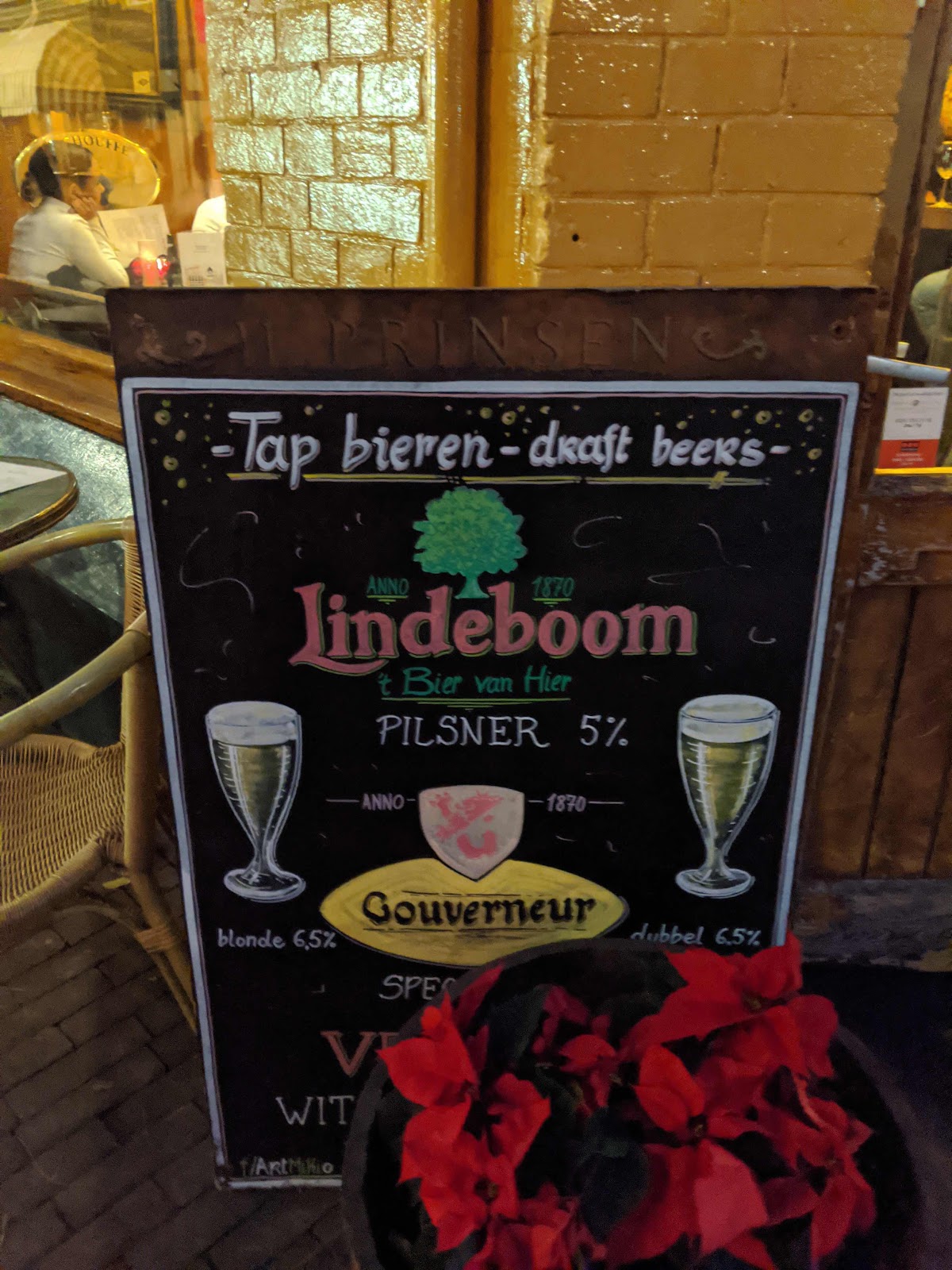 A Twitter follower had asked if I’d seen any Lindeboom beers — I hadn’t  — so this seemed like a good chance.
The place was called Cafe De II Prinsen (darn cyclist came out of nowhere!) 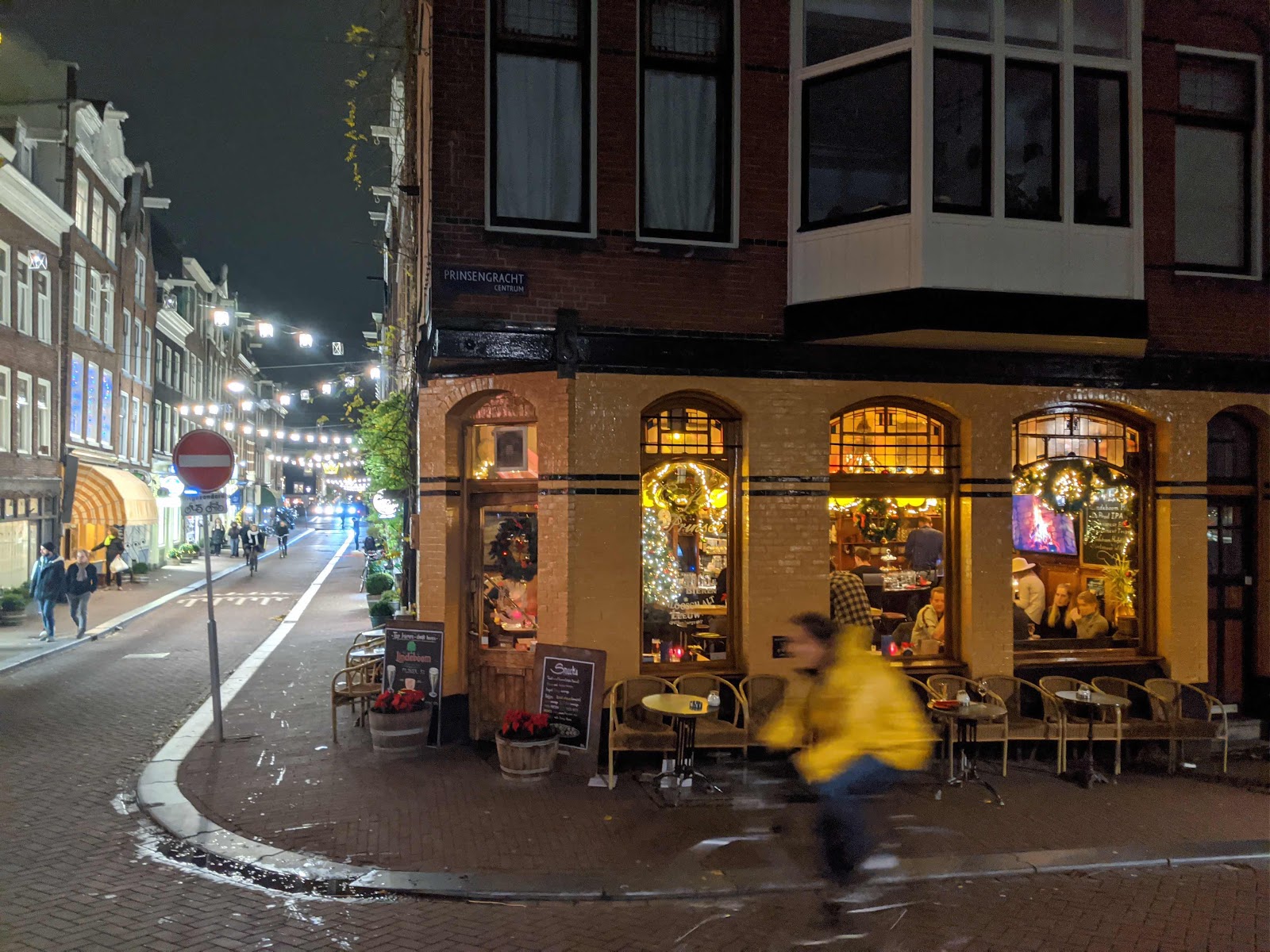 They had a number of Lindeboom beers on tap, plus a De Prael IPA (there was an extensive list of De Prael bottles). I have fond memories of the Venloosch Alt from my visits to Amsterdam twenty years a go (and a couple of visits to Venlo) 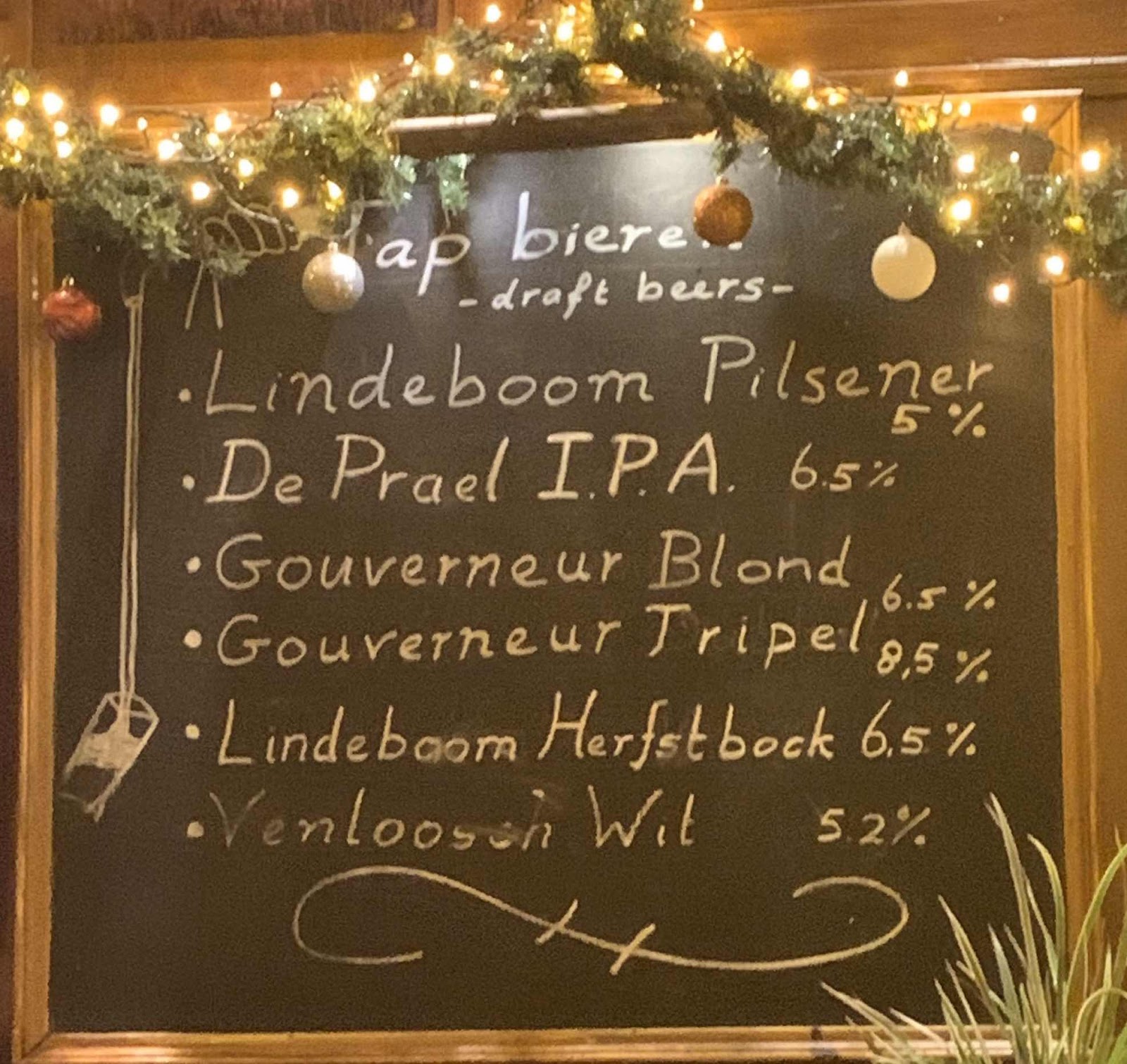 I ordered the Lindeboom Pilsener. Not much to say about it, a very drinkable Dutch Pils, but not anything super special. 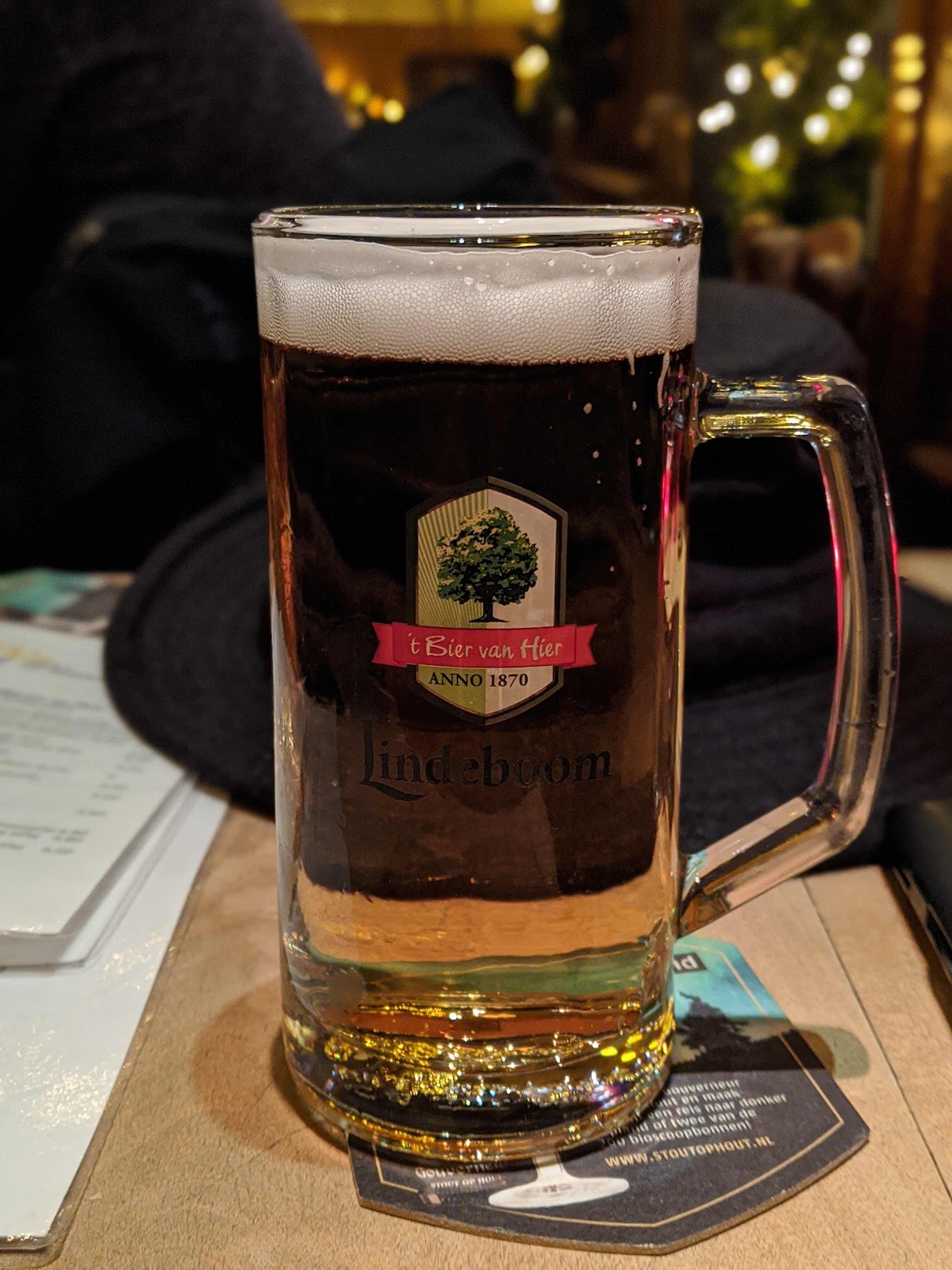 They had a snack menu and I tried the meatballs in Satay sauce. 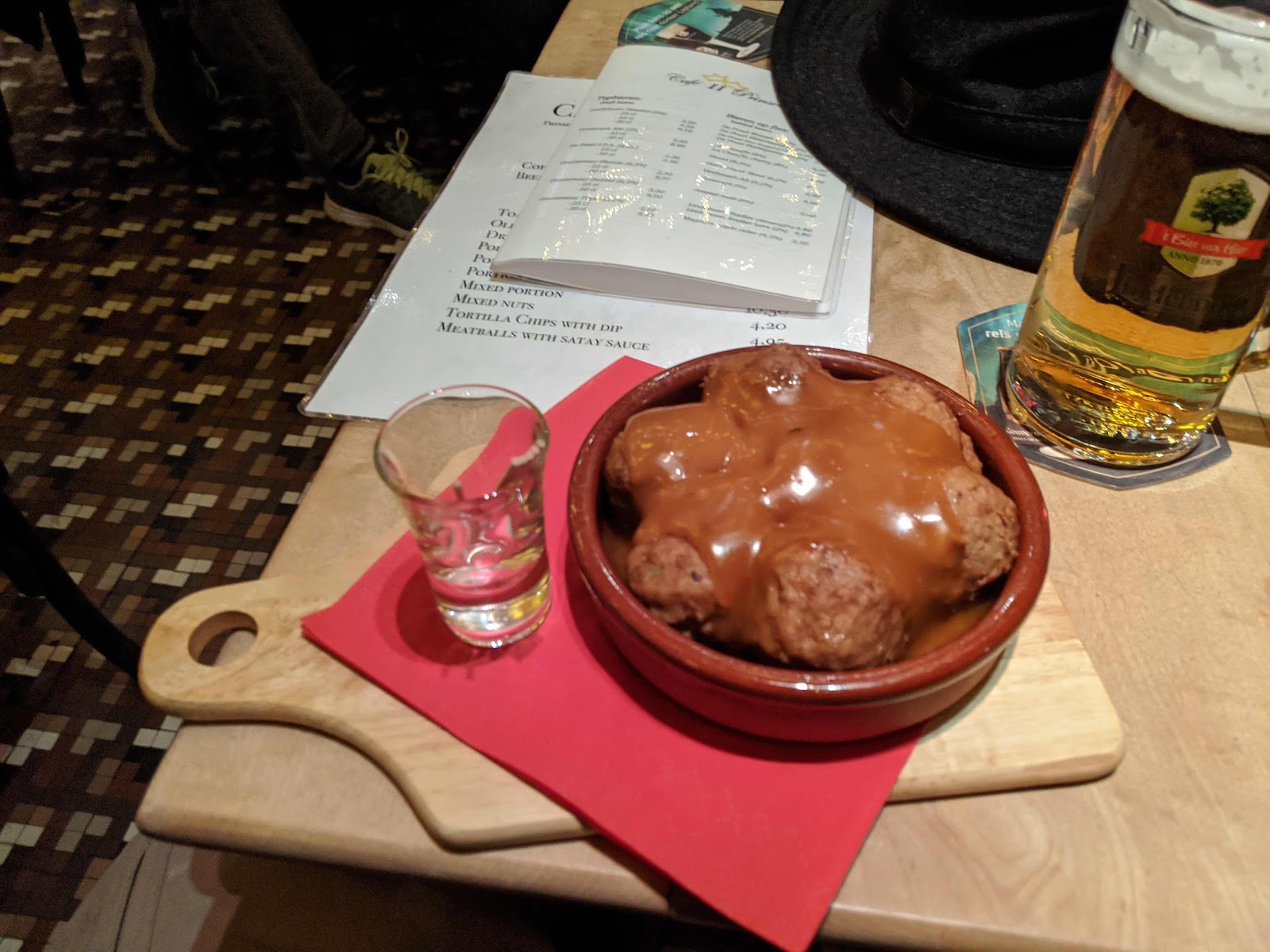 The Cafe II Prinsen is on the Prinsengracht, just north of the Anne Frank House and the Westerkerk. Looks to be a cozy place and I will try and stop in again on a future trip.

I walked to the Westermarkt to catch a tram to my next stop, but when my stop came, I stayed on the tram and continued to my hotel, making it an early night.