It was a cool and rainy day, so I decided to visit some breweries/brewery taps. On the way to the tram stop I saw something new for me — a Tesla Model X taxi. I have no idea if they charge the same prices or they get a surcharge but I thought that was fairly cool. I’ve seen a number of Teslas here in Amsterdam — not as many as in LA but a fair number. 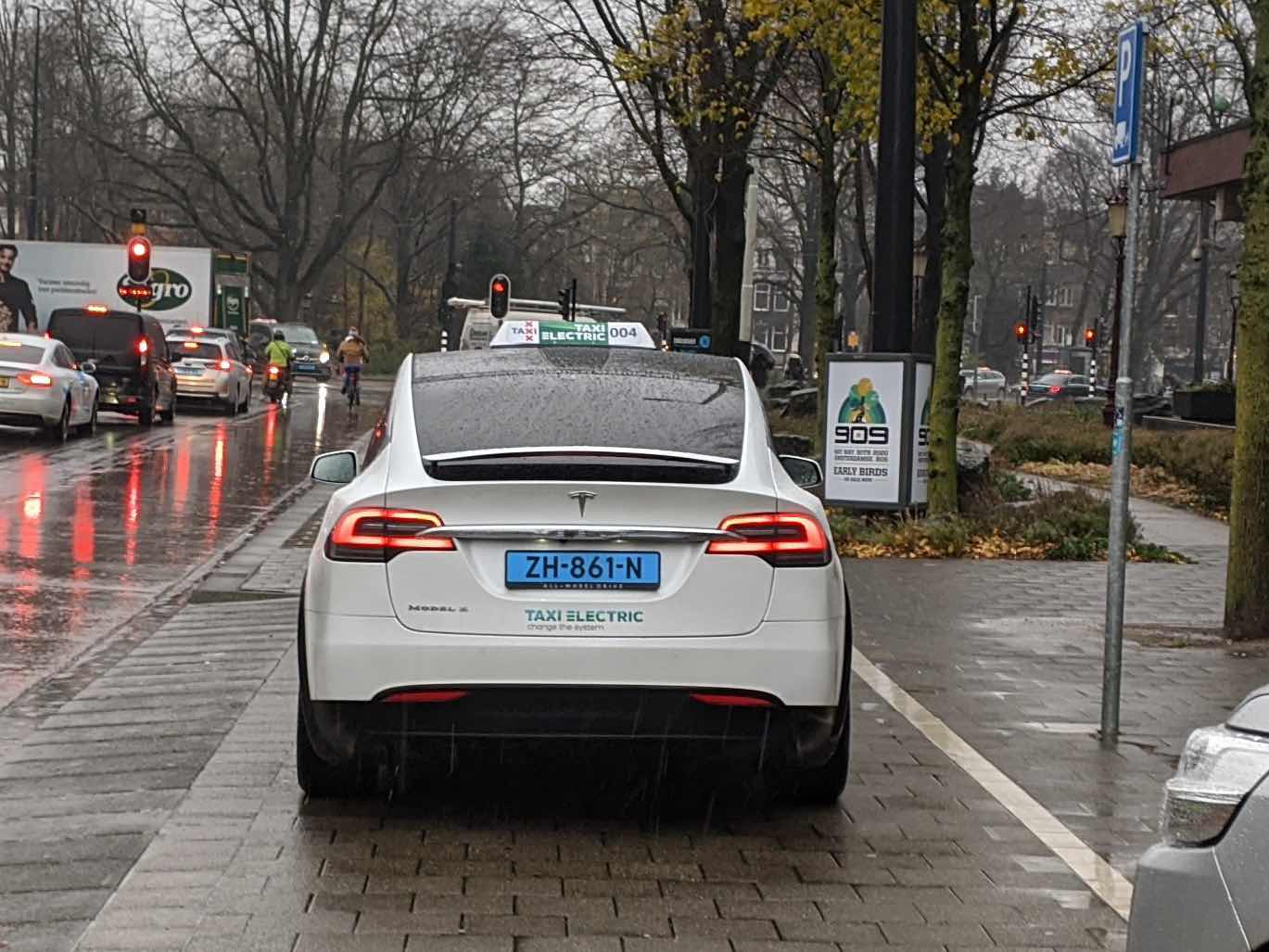 A tram and bus ride later I was at the front gate of the Marineterrein. This is the former home of the Royal Dutch Navy and is now a sort of industrial park, though there still are defense related offices here.
The former officer’s quarters is now a hotel, Pension Homeland and also houses Brewery Homeland. The restaurant/cafe also acts as their taproom. I assume it was formerly the Officers Club. It has a well kept 1960’s sort of vibe. 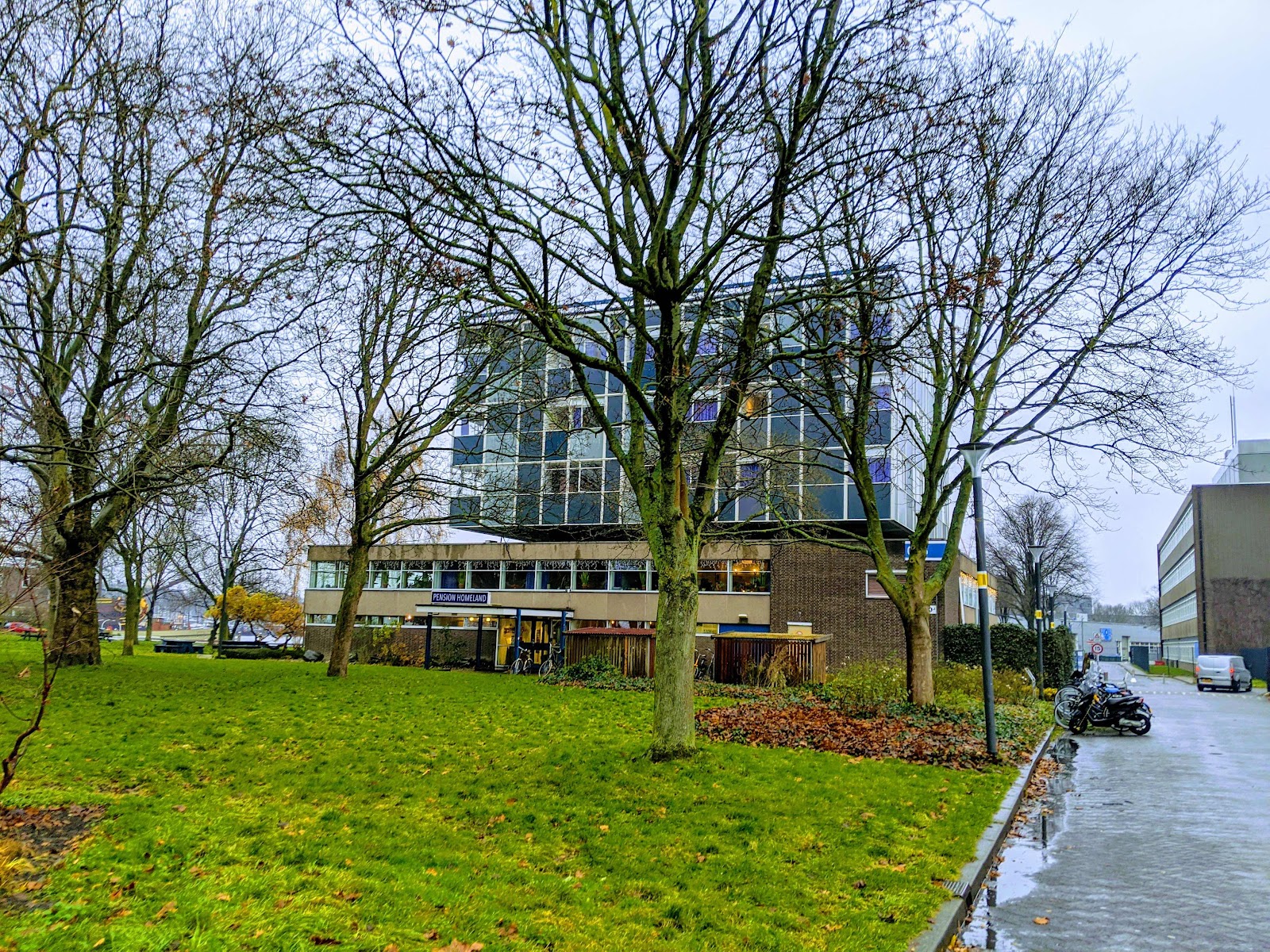 They have seven regular beers on tap here.

I started off easy with the Luwte Session IPA — about 3.5% and very tasty for such a low alcohol beer. 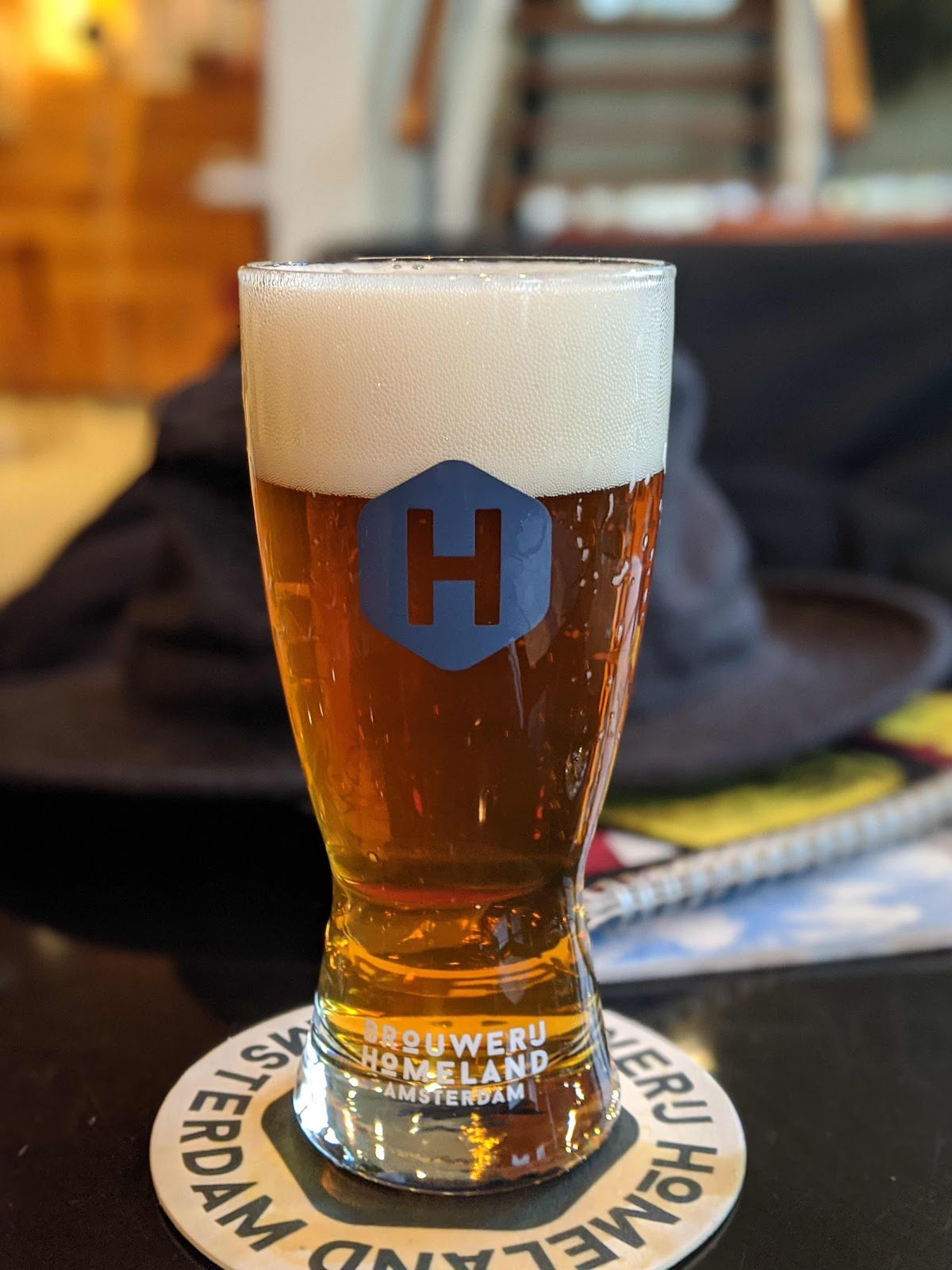 Next up was their Saison, called Pieremegoggel. A little darker than a typical saison, it is made with hibiscus flowers and Citra hops. A strange combo, but it works. 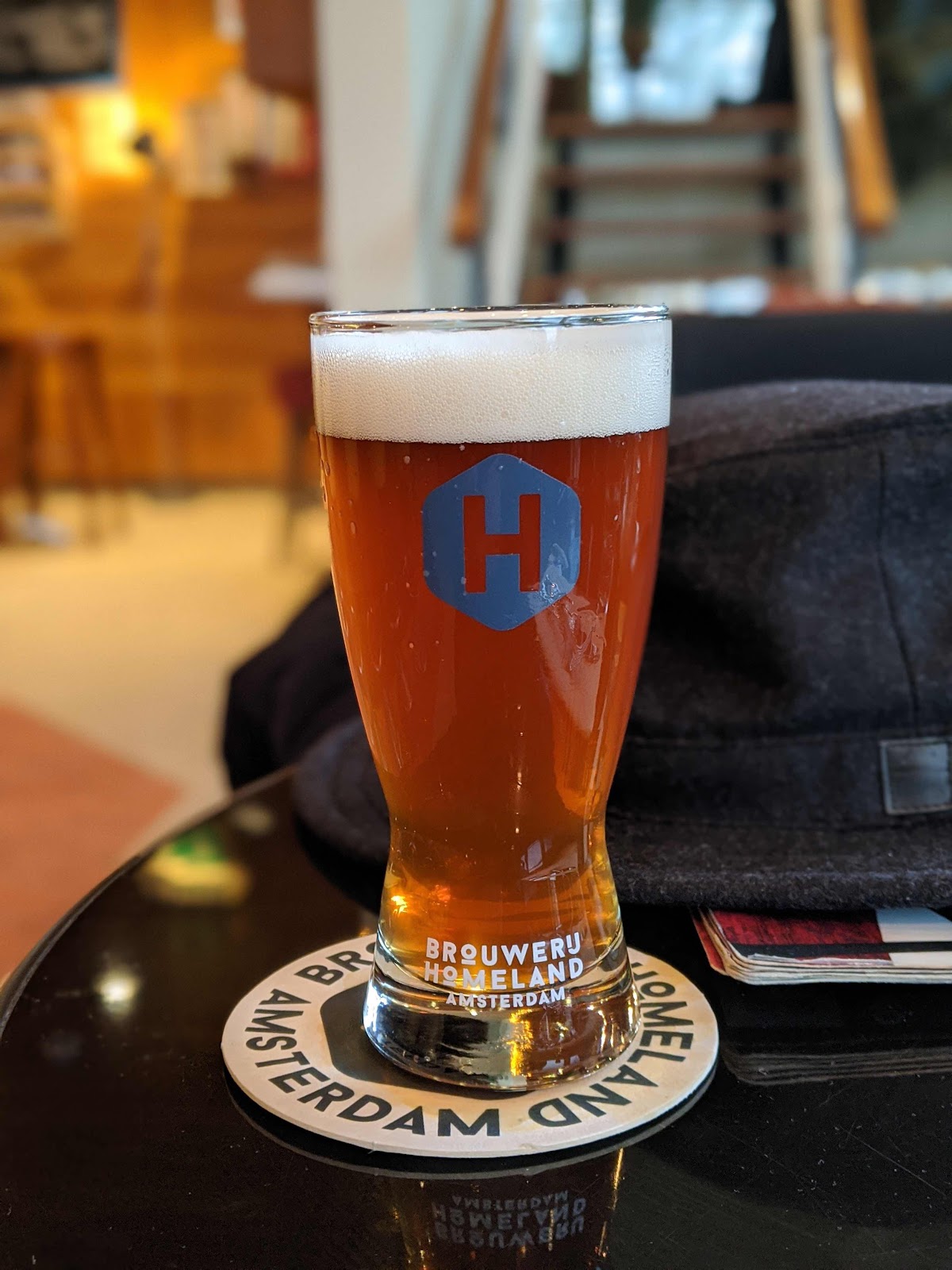 It was lunchtime and feeling nautical I ordered the Halibut Sandwich. It was not quite what I expected, being almost a halibut salad — I had expected breaded and fried piece of fish. It was very good and hit the spot. 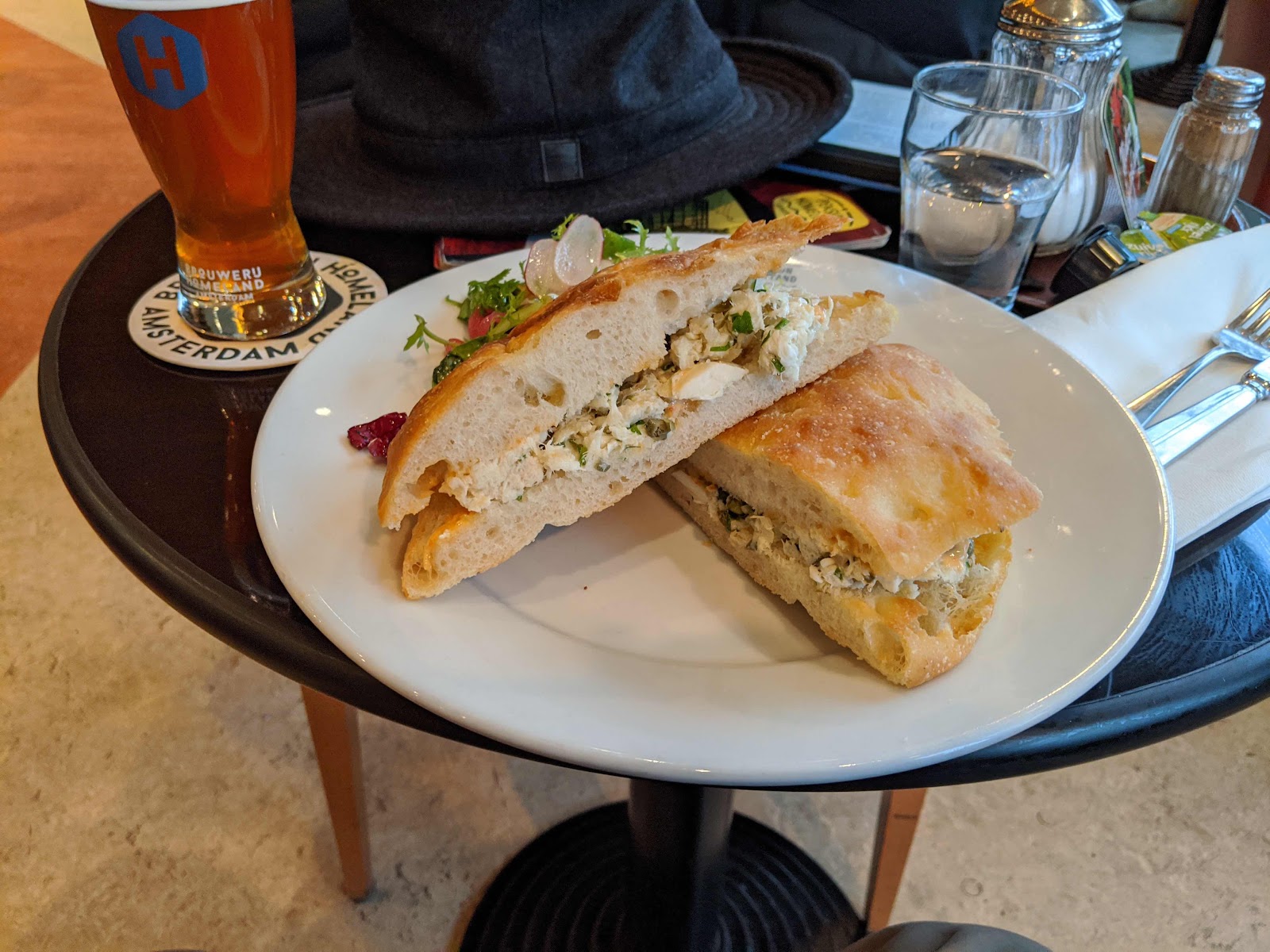 To go with it I ordered the Katzwijm IPA. This was not the big brother to the Session IPA but full on California style IPA, lots of resinous hops. 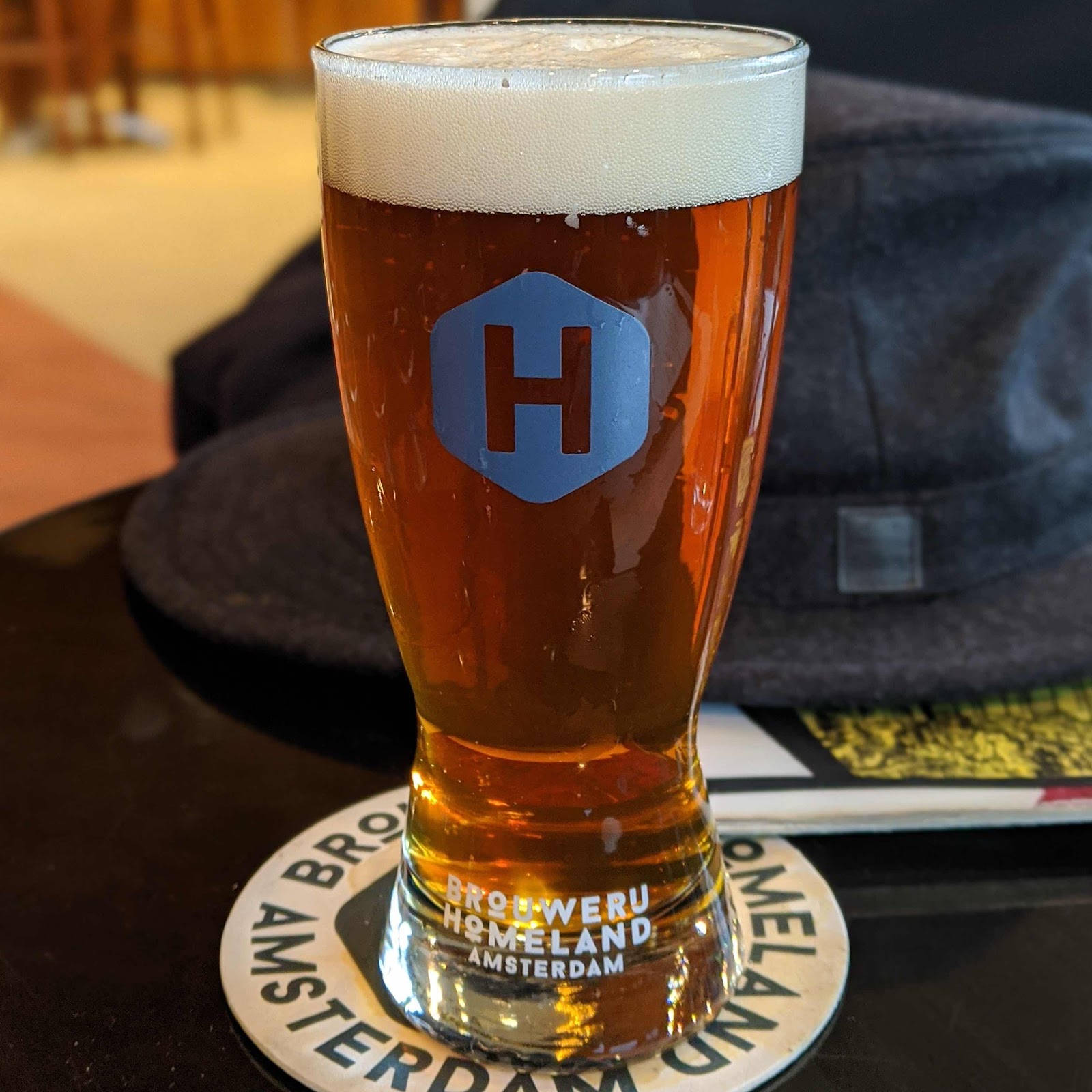 I was getting far too comfortable so it was time to move on. I walked out the Marineterrein and caught a bus headed to Brouwerij ‘t IJ, known for its iconic  windmill. The brewery was the first “craft” brewery in Amsterdam. I first visited it well over 20 years ago. The beers were often hit or miss — very very good when on but occasion basically undrinkable. There was a house character that basically was an infection — very nice at low levels but it would often take over the beer. A few years ago they were acquired by Duvel/Moortgat and they have expanded the range and improved the consistency and overall quality. But that house character I so liked is gone. Progress, I guess. 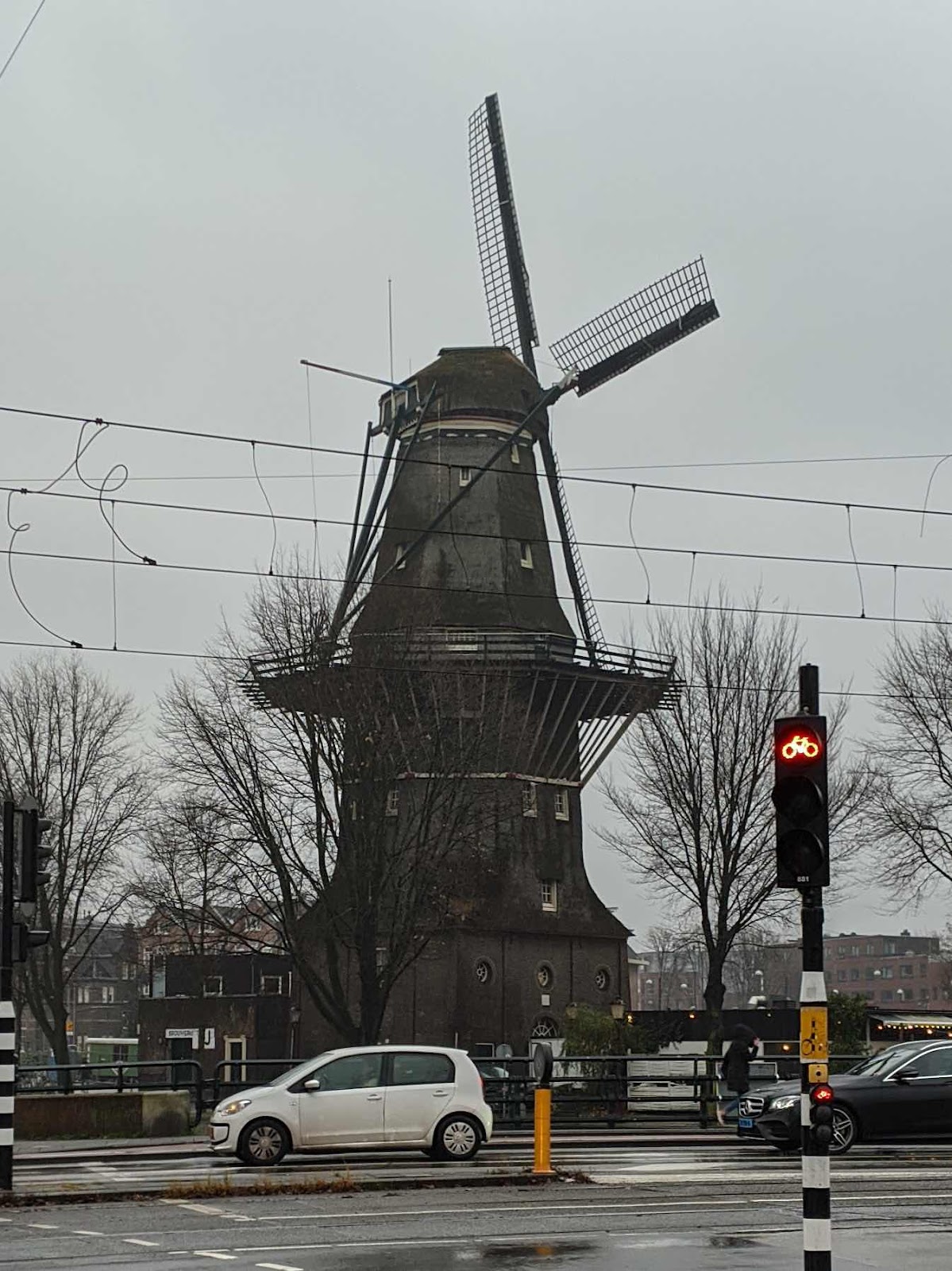 While waiting to cross the street, a truck went by, signaling future battles to come... 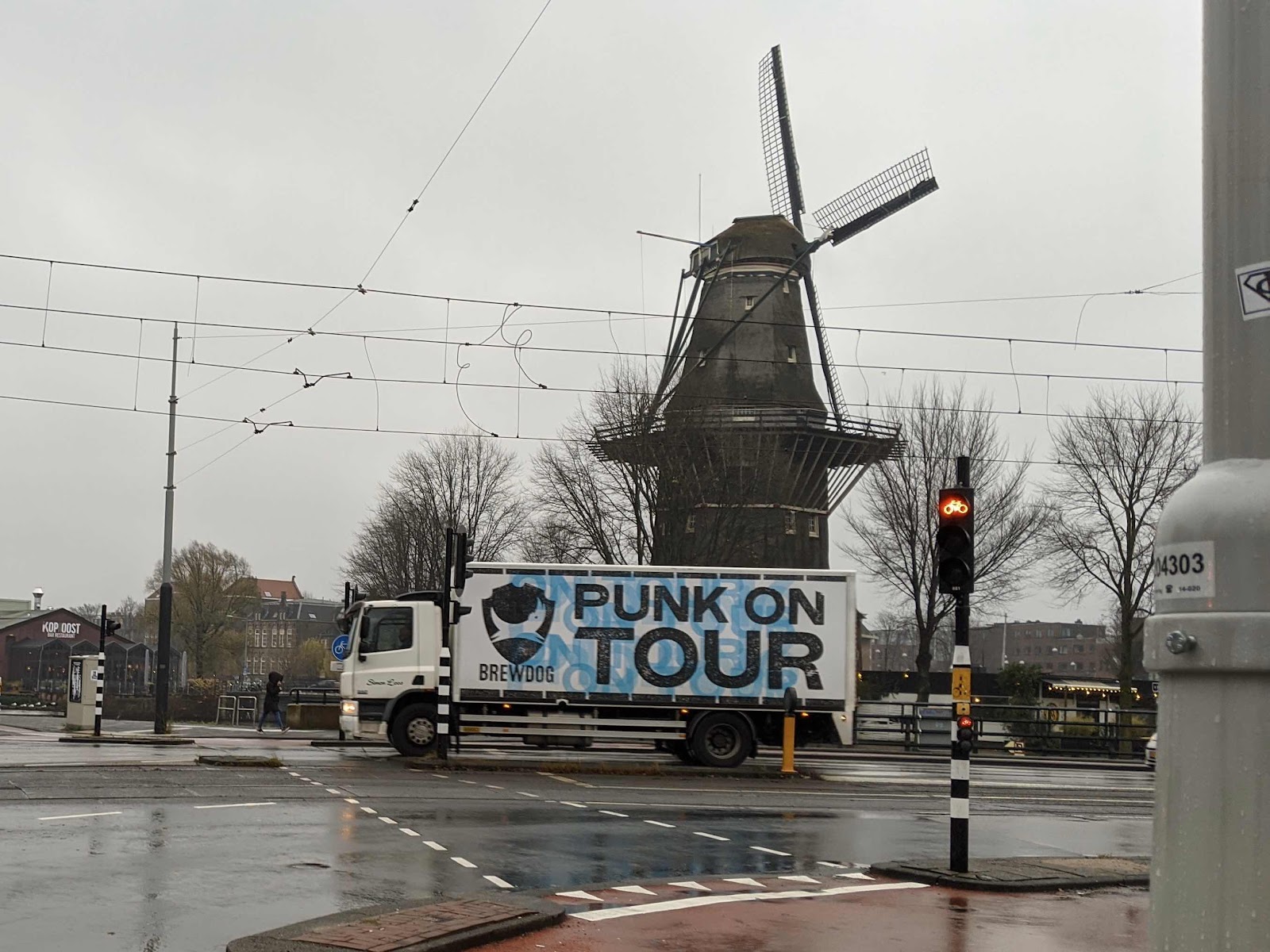 The main production brewery was long moved to a more suitable location but they still have a brewpub sized brewery where some of the specialty beers are brewed. The pub/brewery is actually in a building next to the windmill, not in the windmill itself. 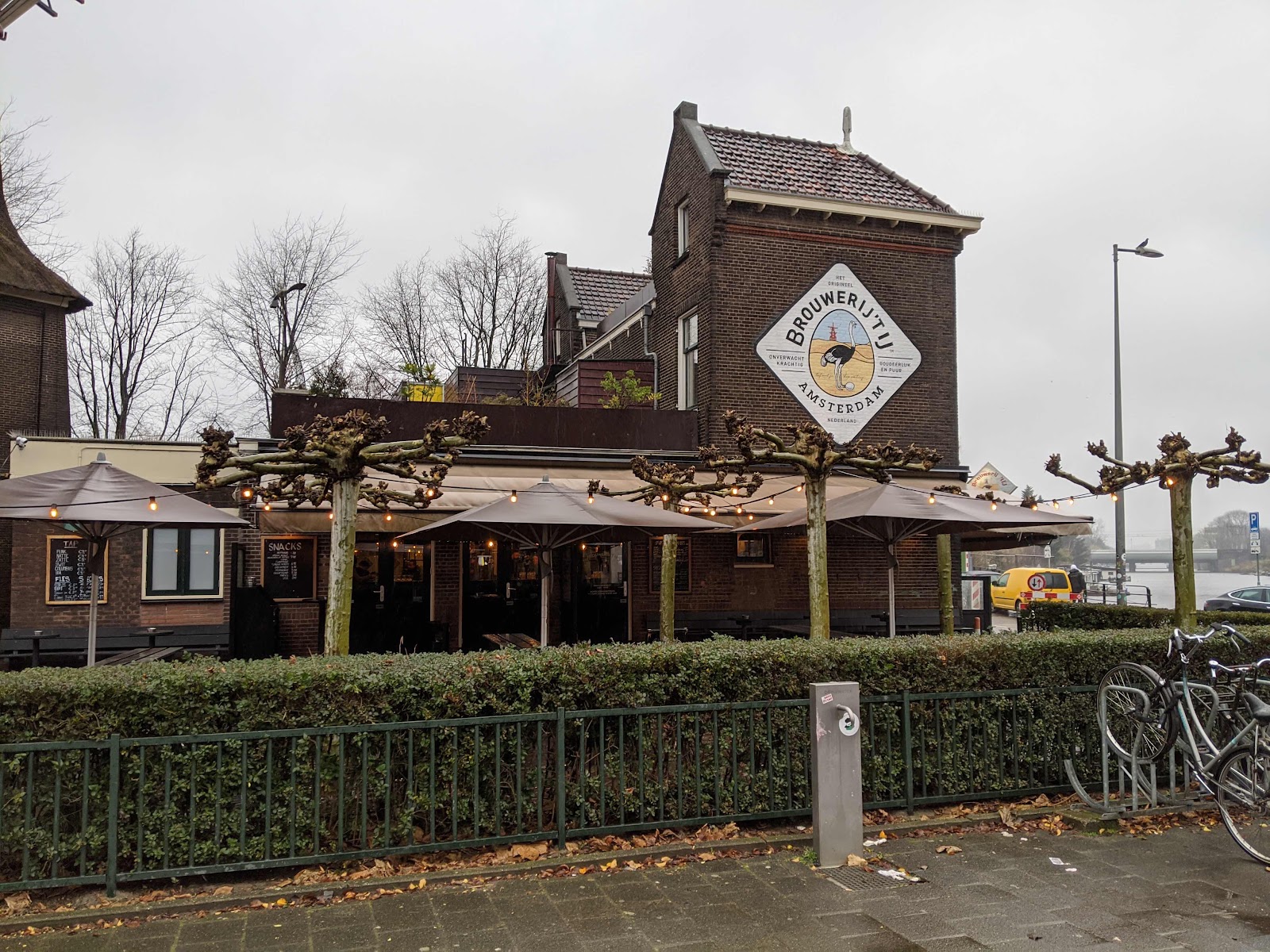 A good range of beers on tap 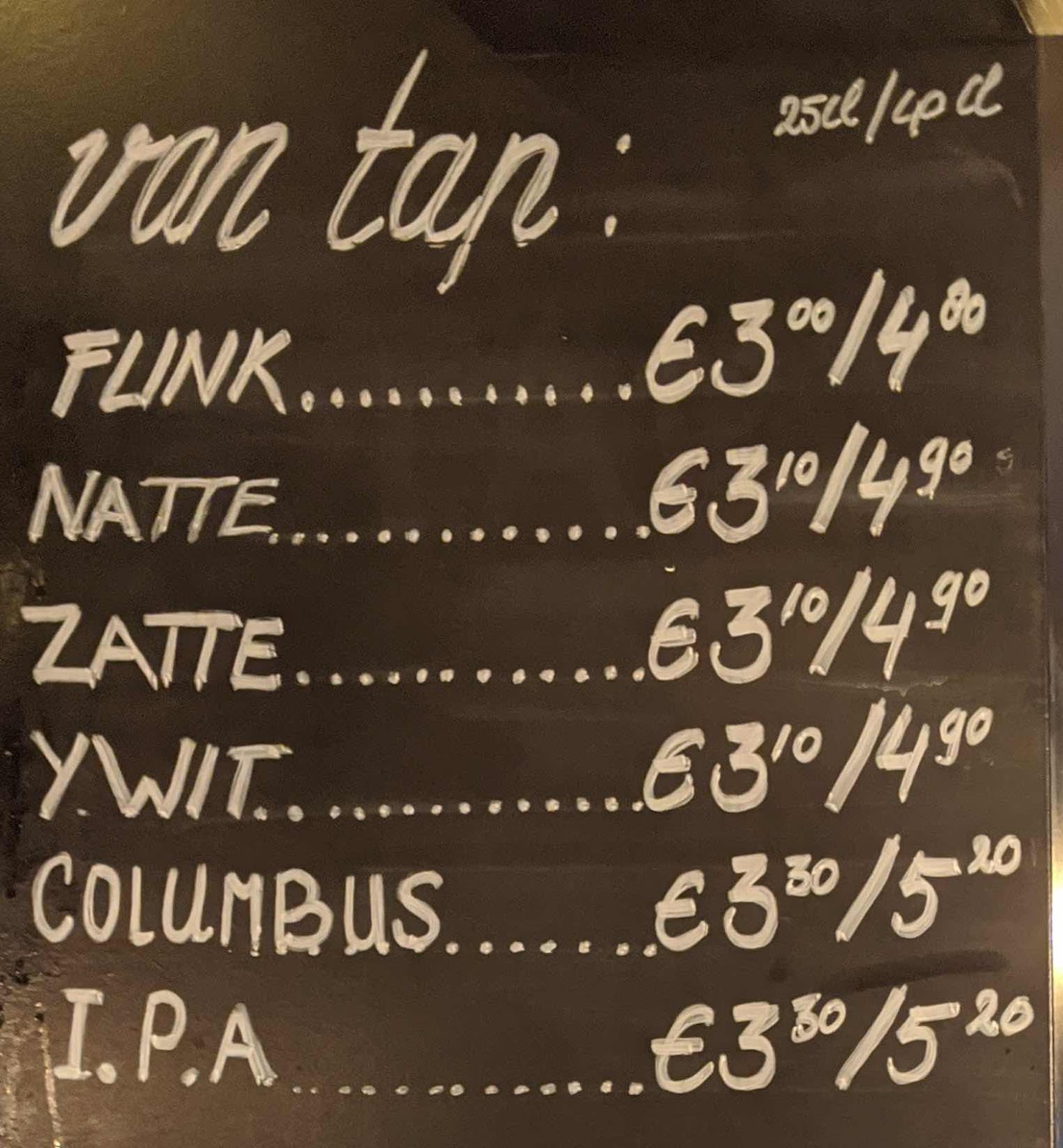 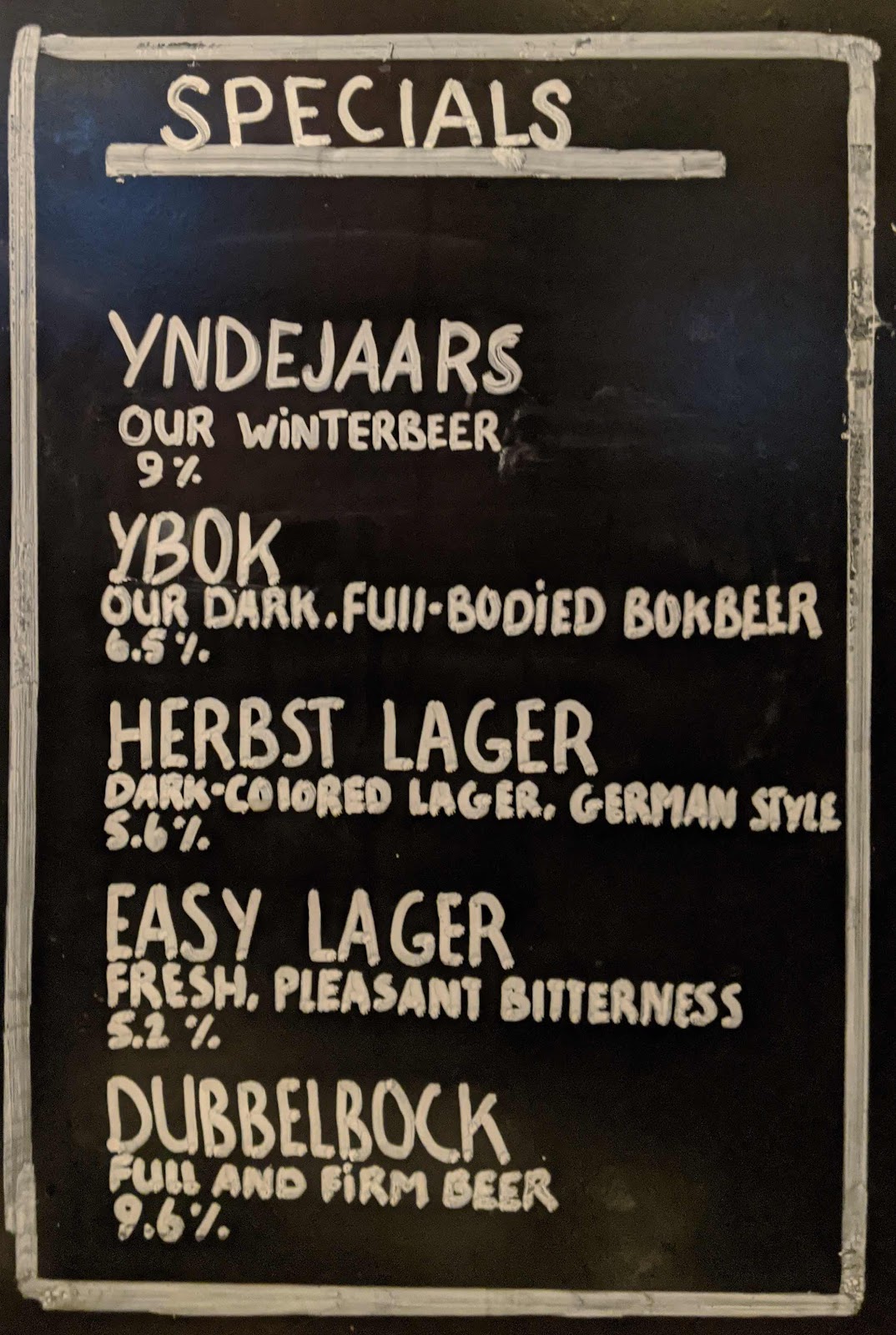 The beers (other than the Wit) tend to be a bit on the alcoholic side, so I started with the Herbst Lager, which was brewed with German malts and hops. It was very malty — maybe a bit too much, a little bit more bitterness would have improved it, I think — but was very enjoyable. 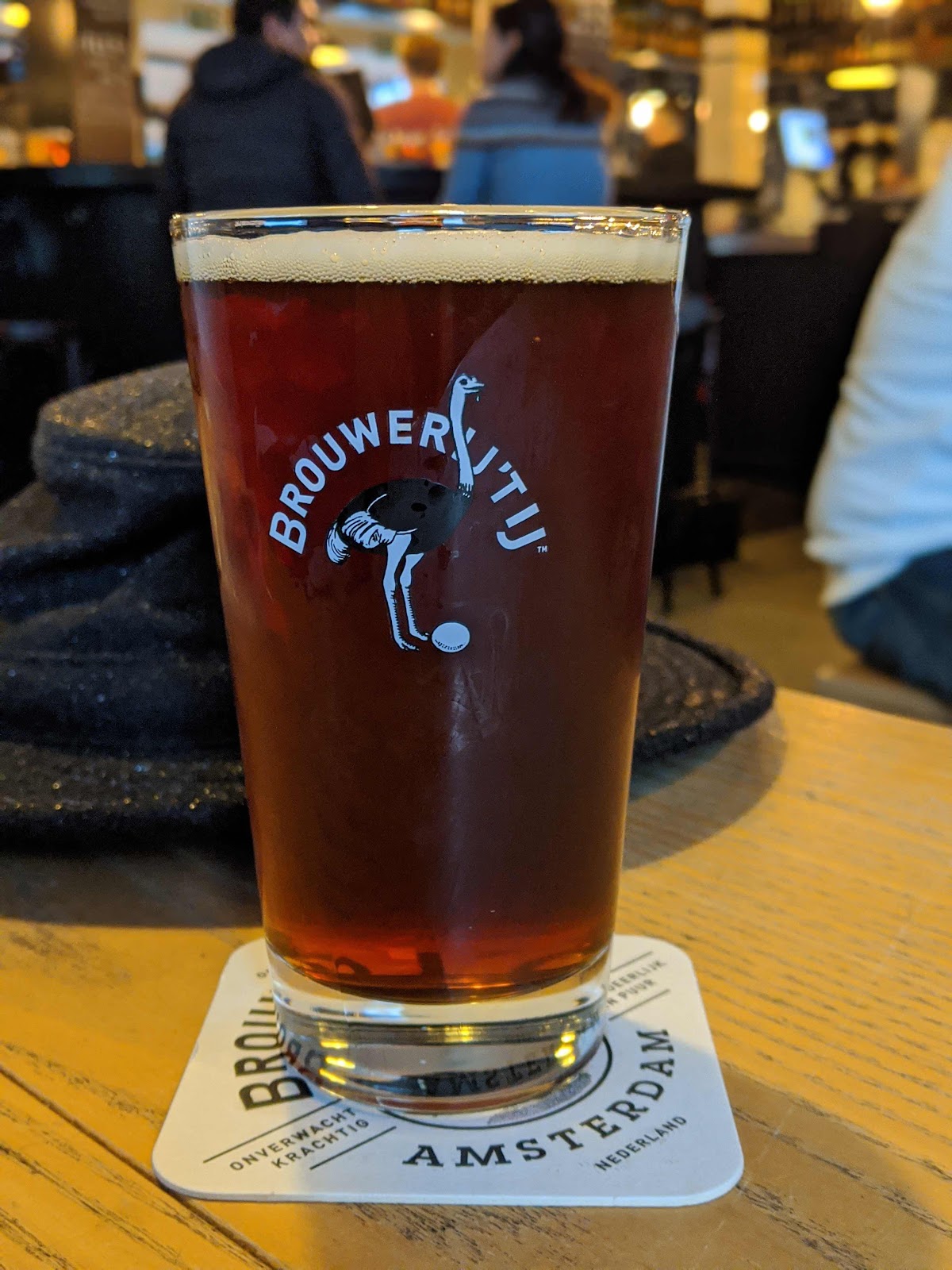 Next up I went big — the IJndejaars Winterbeer. As the saying goes — make no mistake, this is a big one (9%) They very the recipe slightly every year and I’m told the bottles are worth aging. 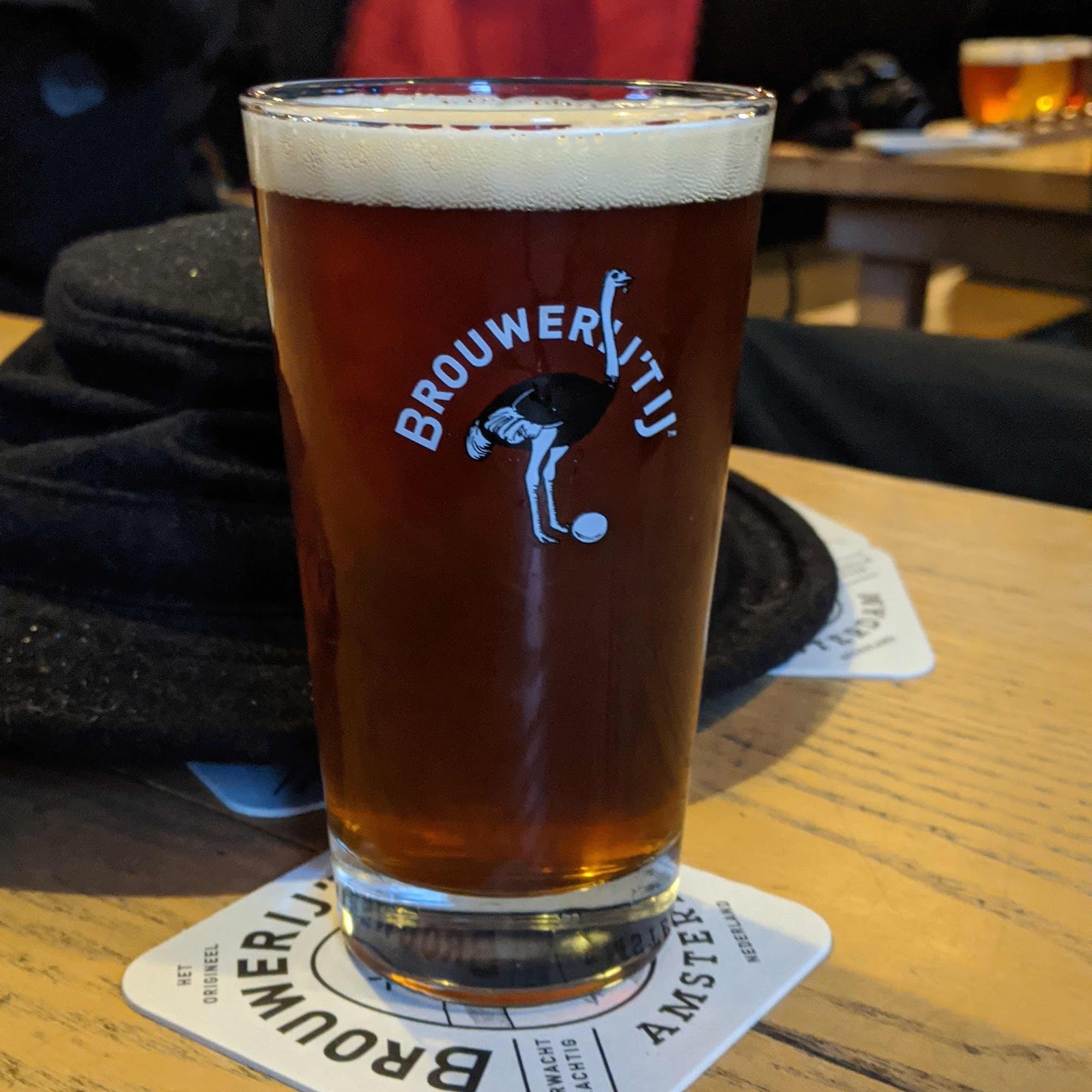 It was rich, but not cloying. It kind of reminded me of a good Christmas fruit cake. It did take a bit of time to finish, though, I was sharing a table with a Japanese couple (Mother, daughter) and when I left the daughter said “What, only two beers?”  I told her this was my second brewery and I had two more to go.  They really seemed to enjoy the beers.
I caught a tram across town and after a short walk I was at De Bar, the taproom for Gebrouwen door Vrouwen, a brewery started by two sisters. 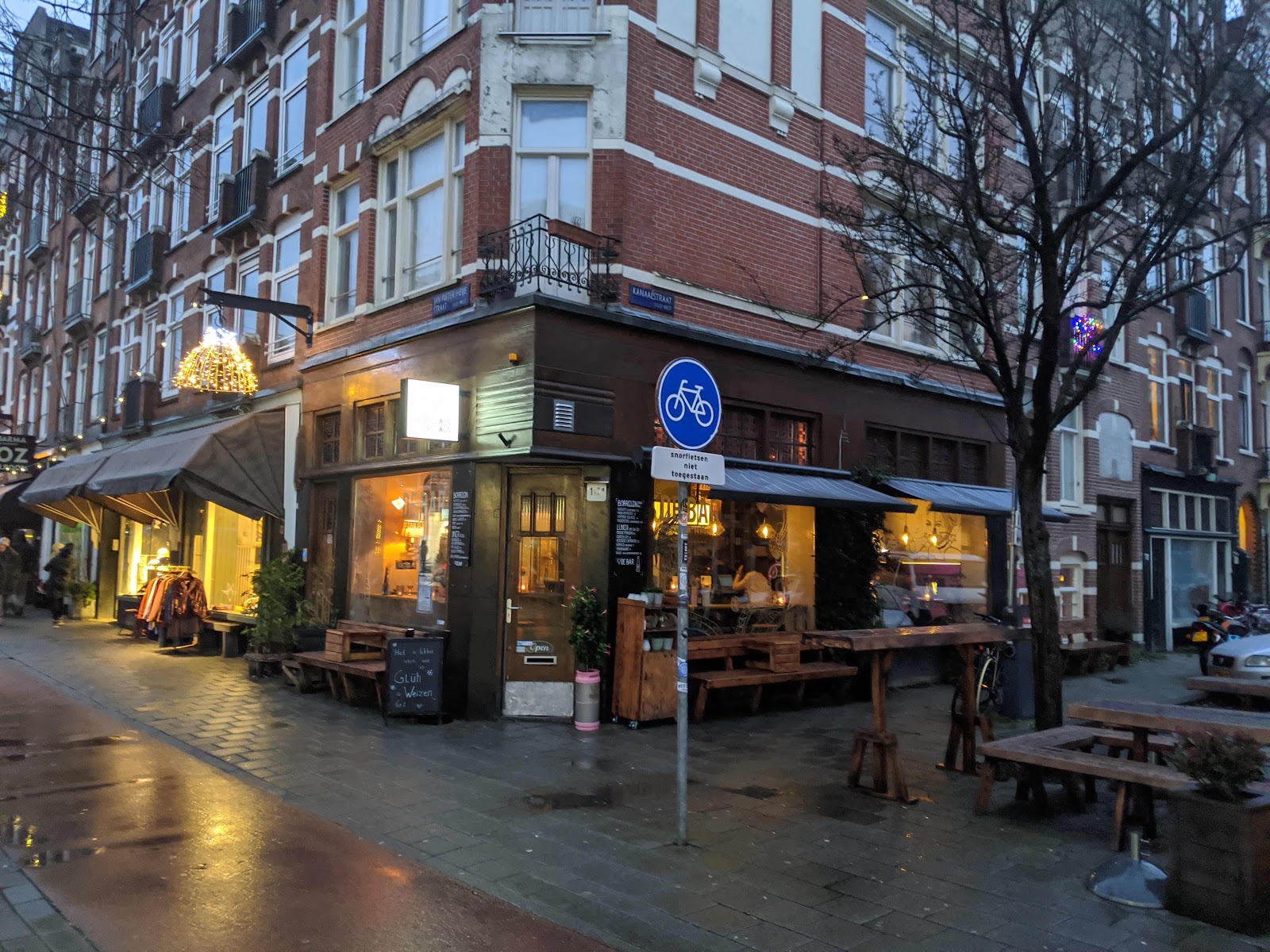 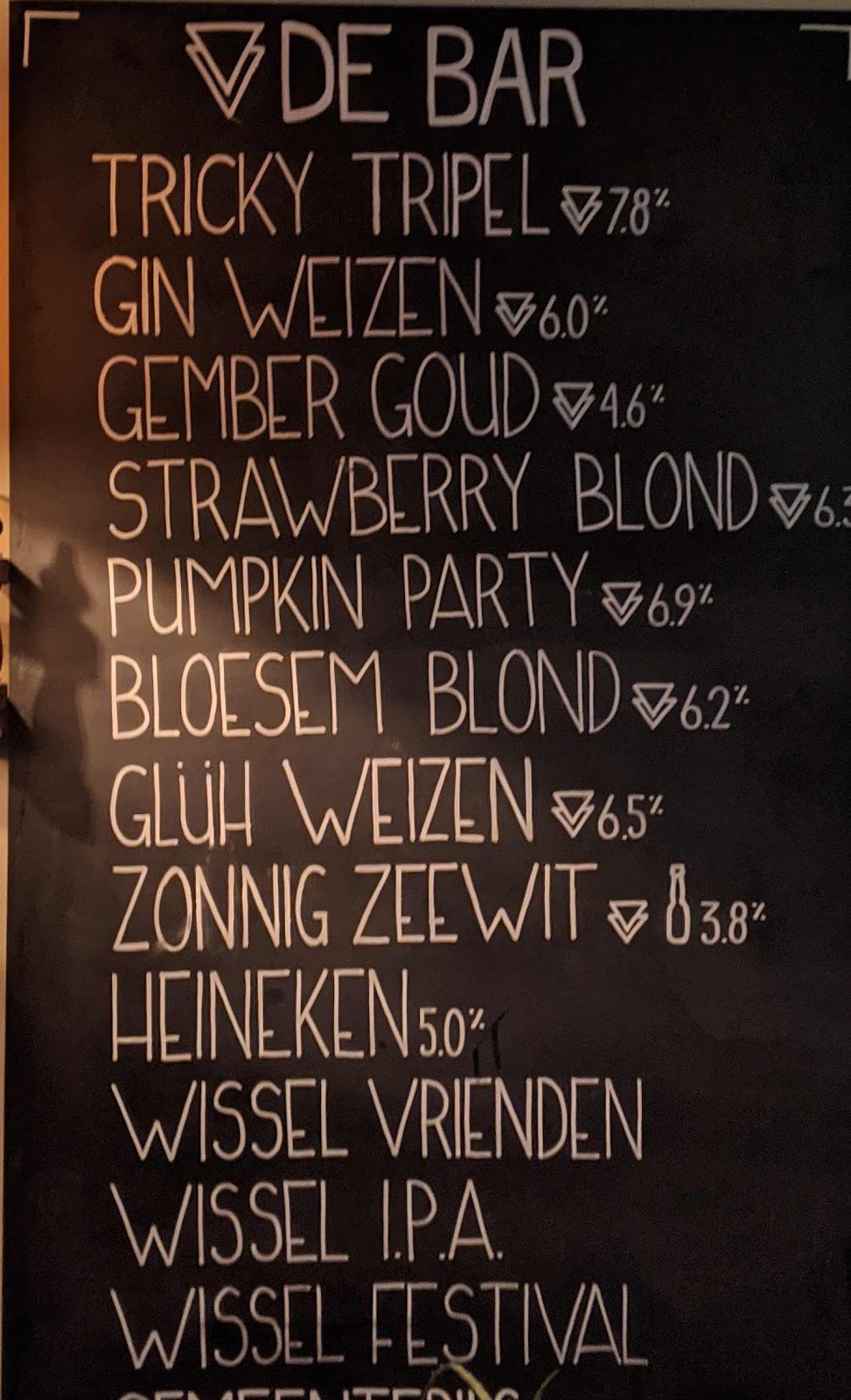 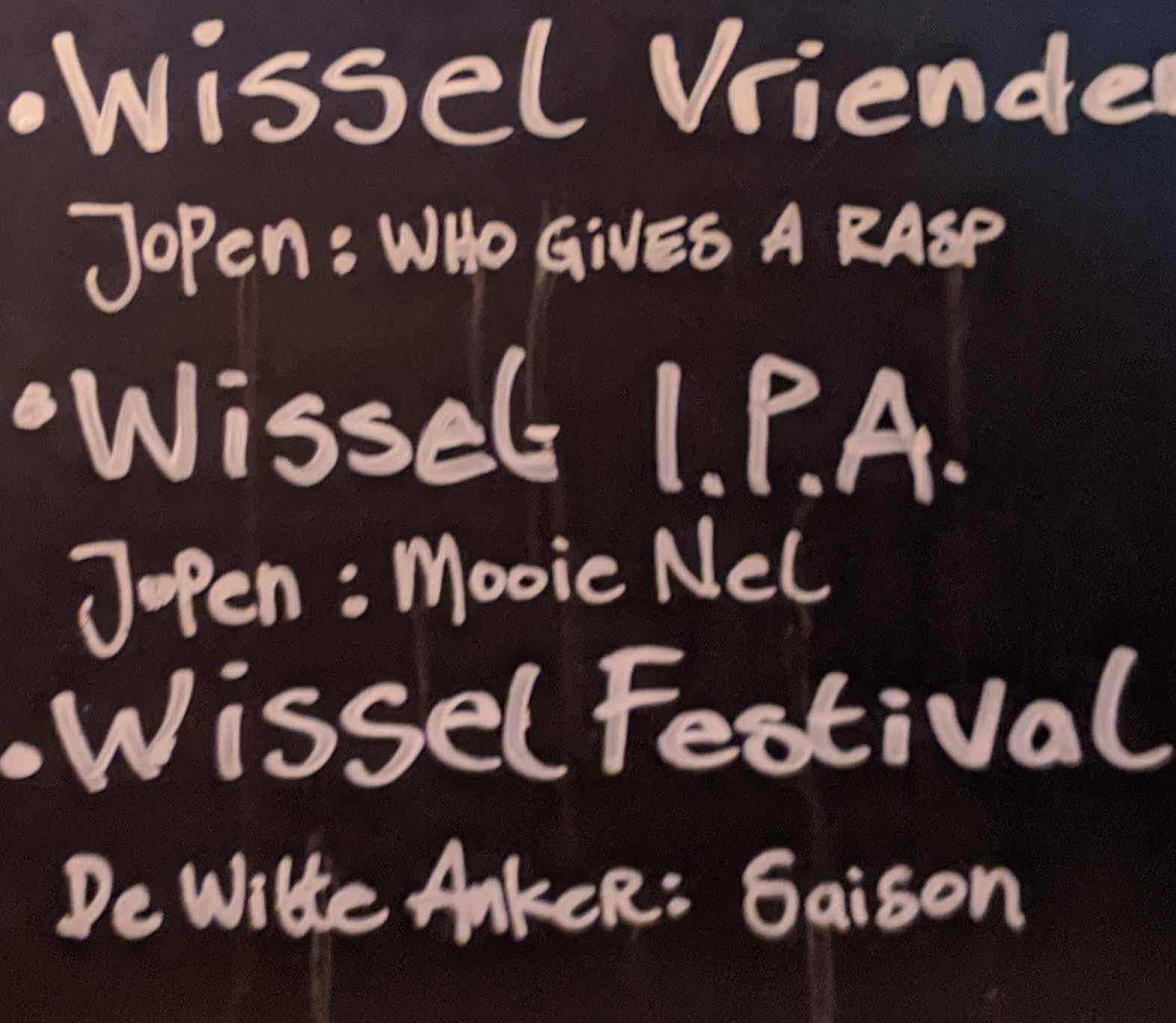 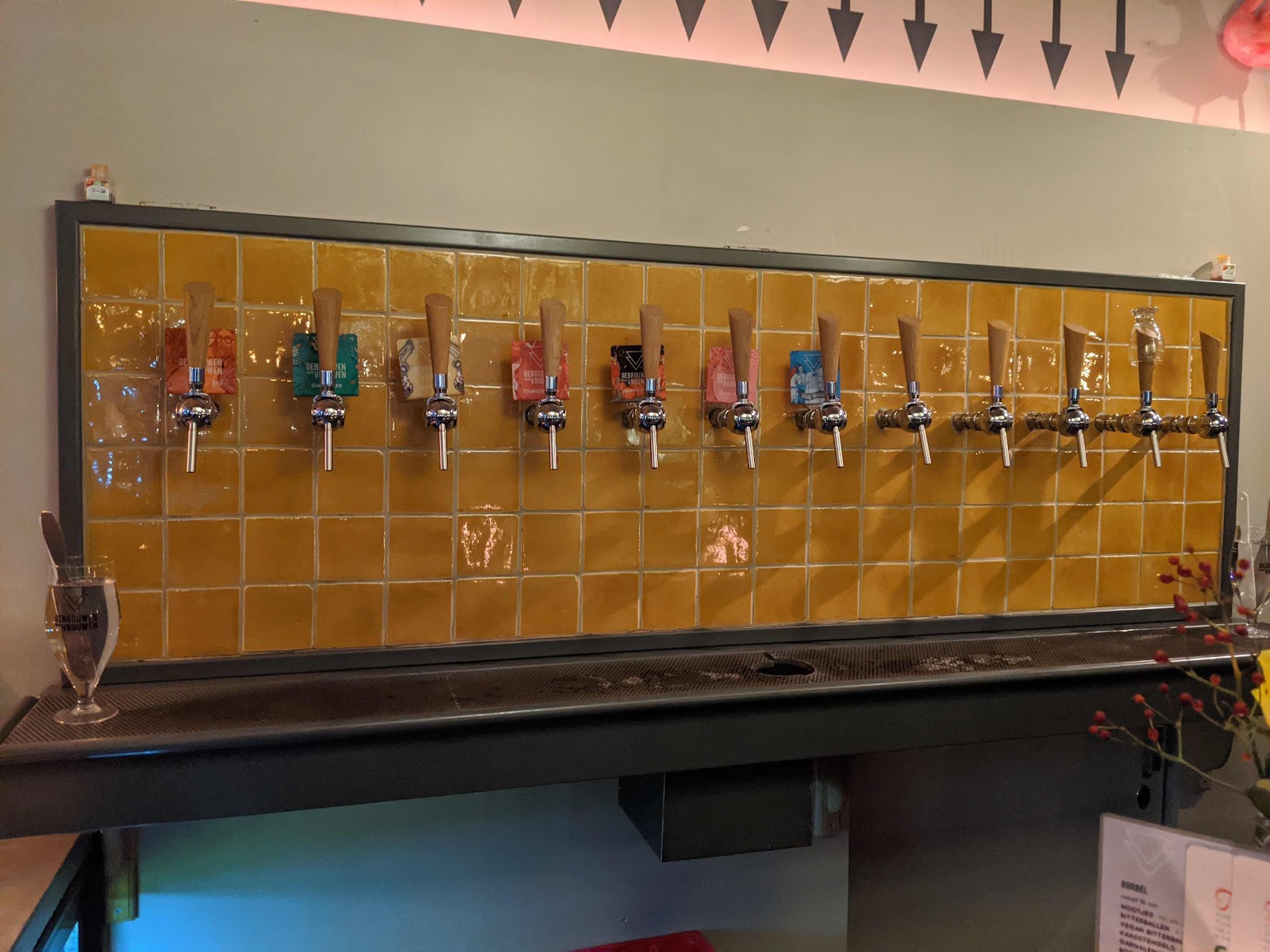 All of the house beers are flavored to some extent. I started with the Bloesem Blond, a blond ale flavored with elderflowers. Very drinkable and rerfreshing. 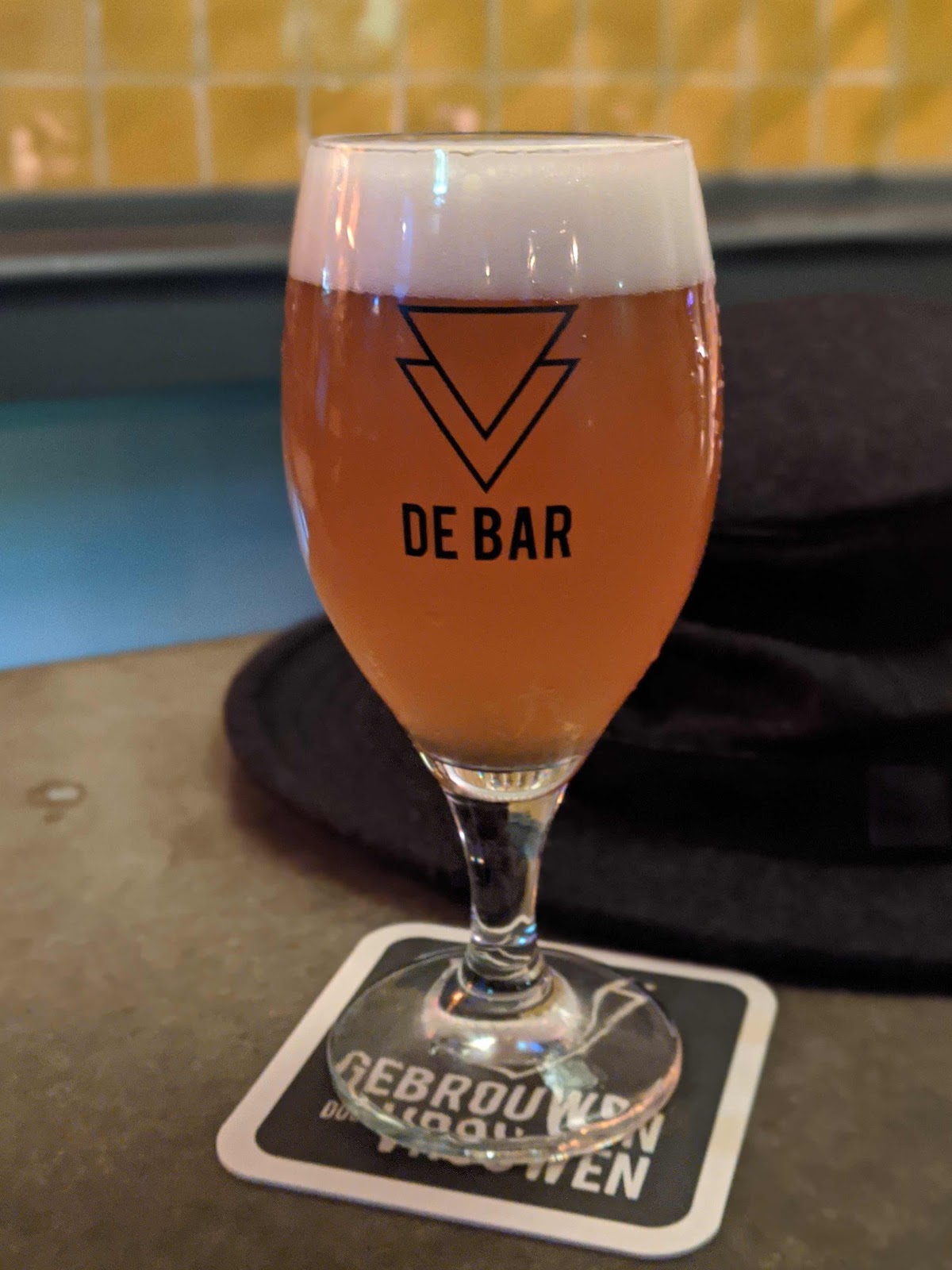 Brouwerij Witte Anker rang a bell with me — I think I had one of their beers before so I ordered their saison. Unfortunately it was the end of the keg and what mostly came out was foam. The bartender managed to get enough to fill a tasting glass, so that is all I got.  Which is too bad as I liked what little I had. 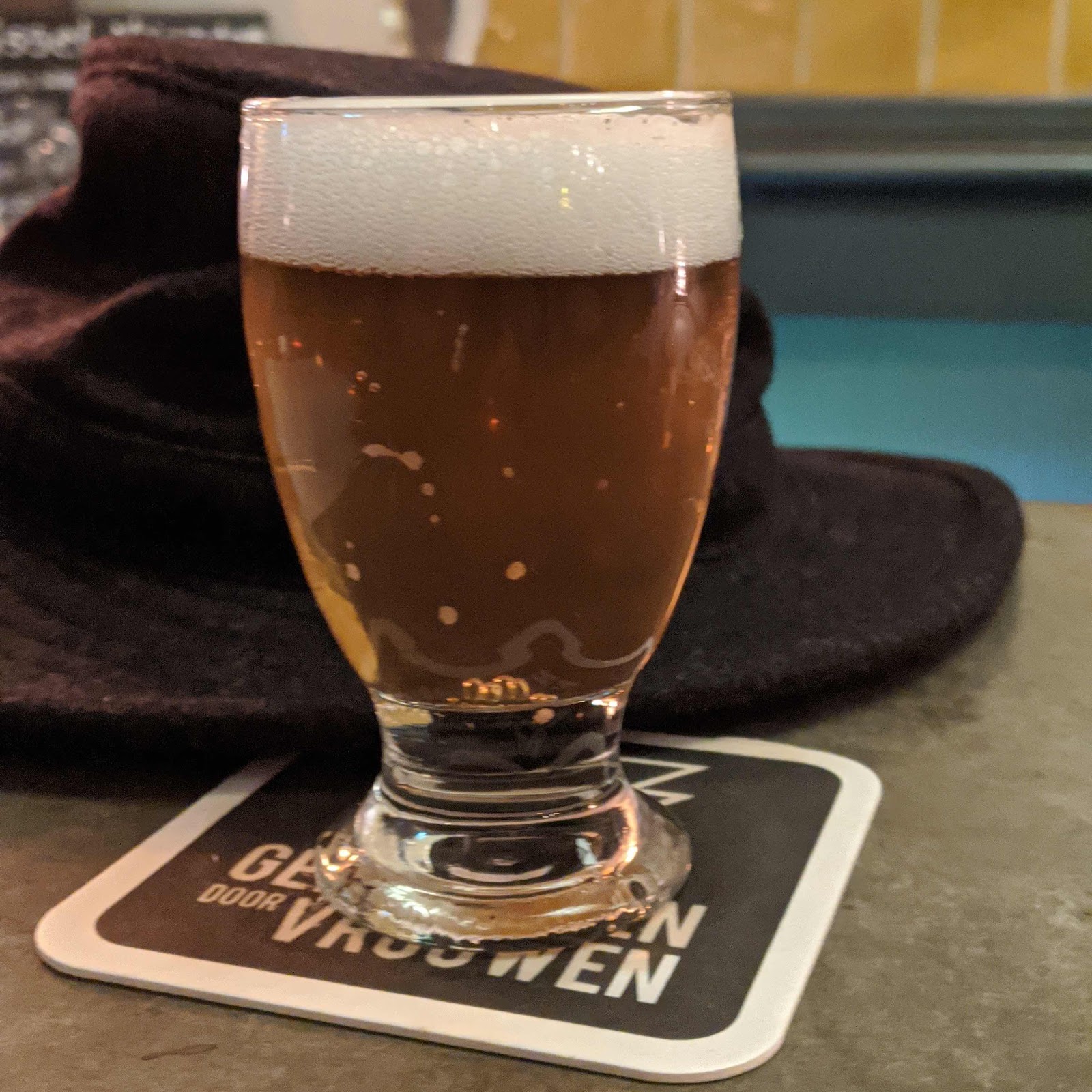 Since I didn’t get my saison, I ordered the house Tricky Triple. It was quite drinkable, maybe a little more malty than is usual but it worked. 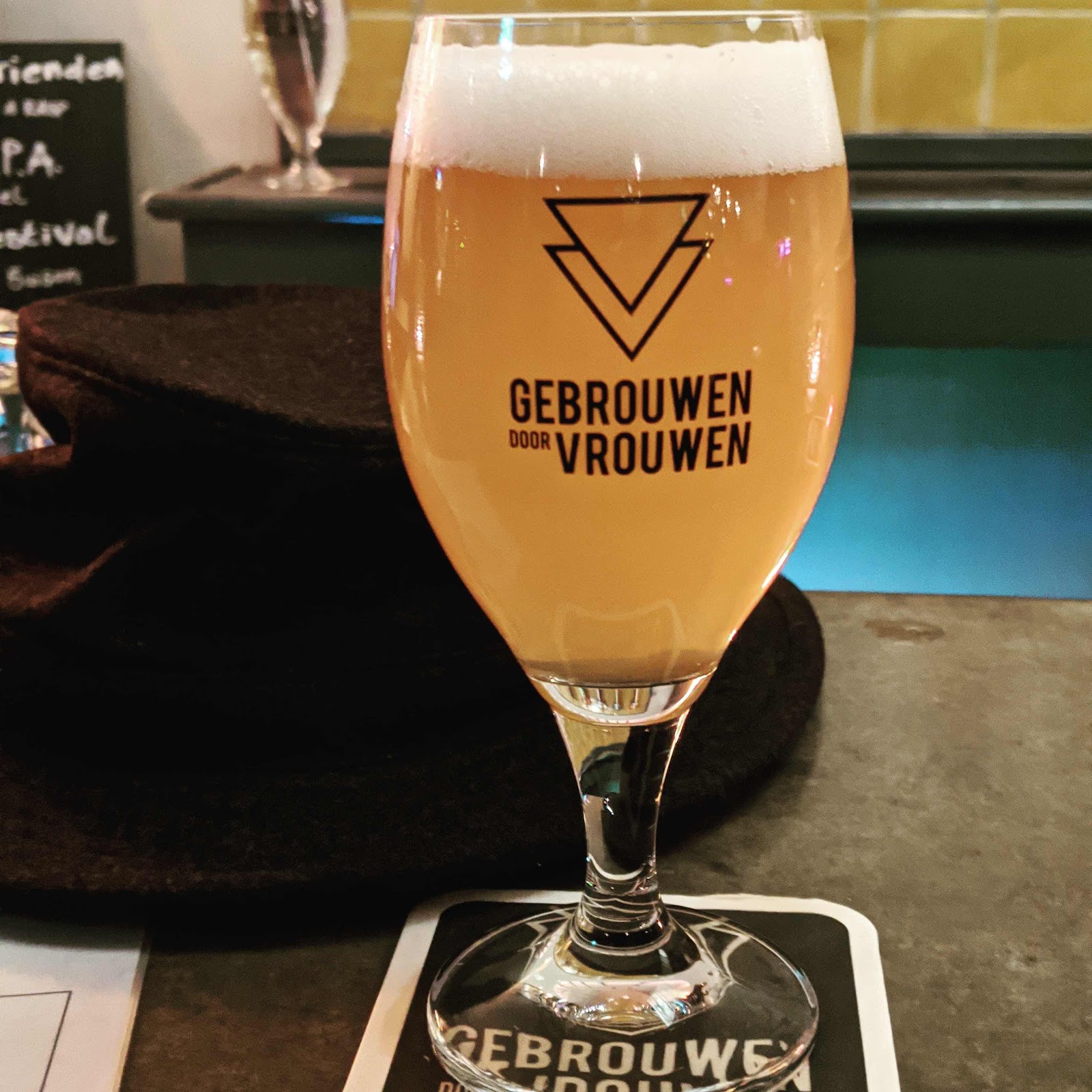 It was time to move back closer to my hotel, so I caught the tram to Stadhouderskade and walked a couple of blocks to the Lion’s Head Brew Bar. This is a brewpub that opened last year. The owner is from South Africa and the food is influenced by that. 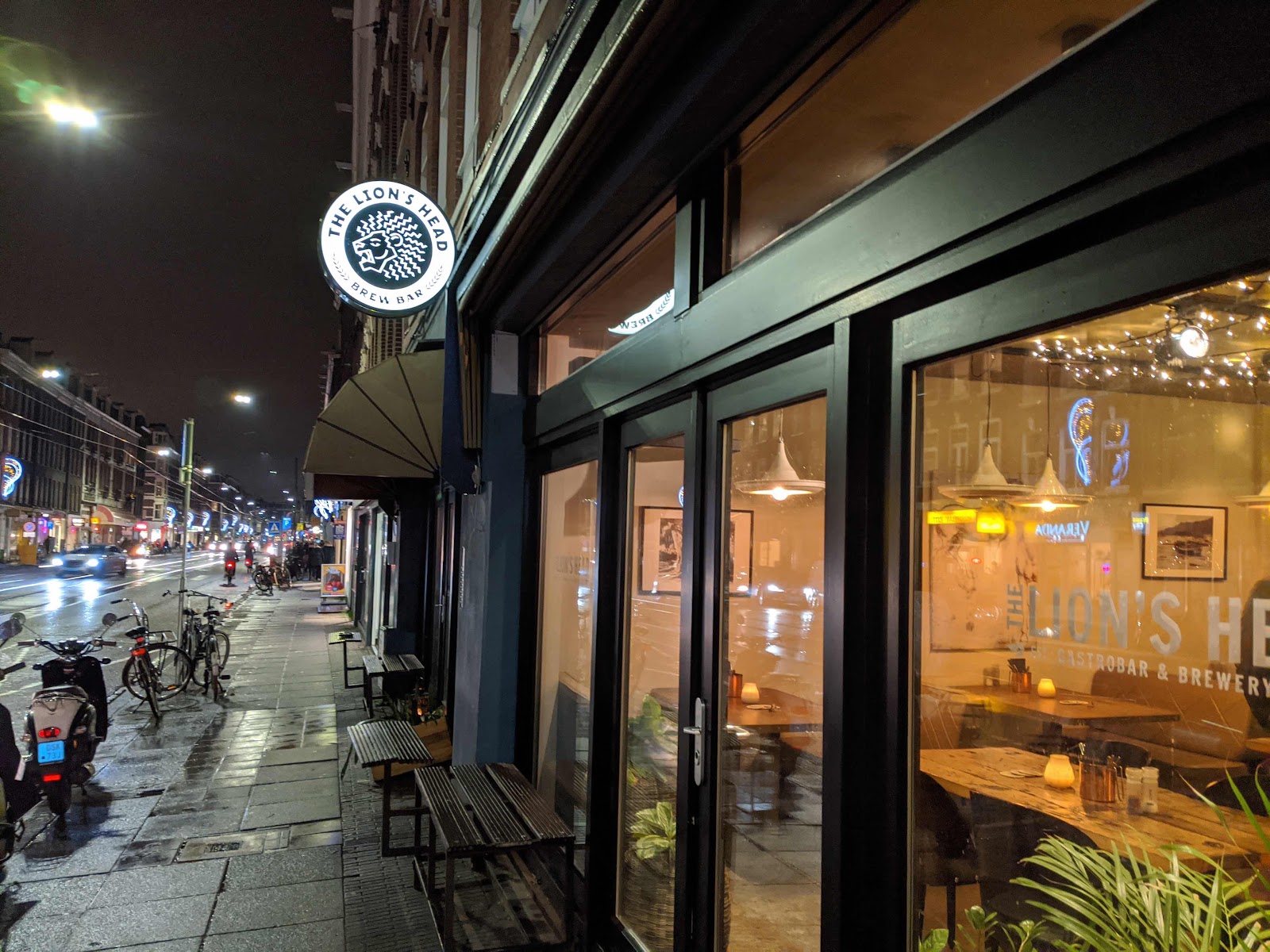 They have five of their own bees on tap. The Dortmunder is from a German brewery but I didn’t get which one. I will have to go back sometime when I am fresh and try it — it is hard to find a true Dortmunder these days. For all I know it could be a Pils from a Dortmund brewery. More research needed. The Frau Schulz is a Kölsch style ale. 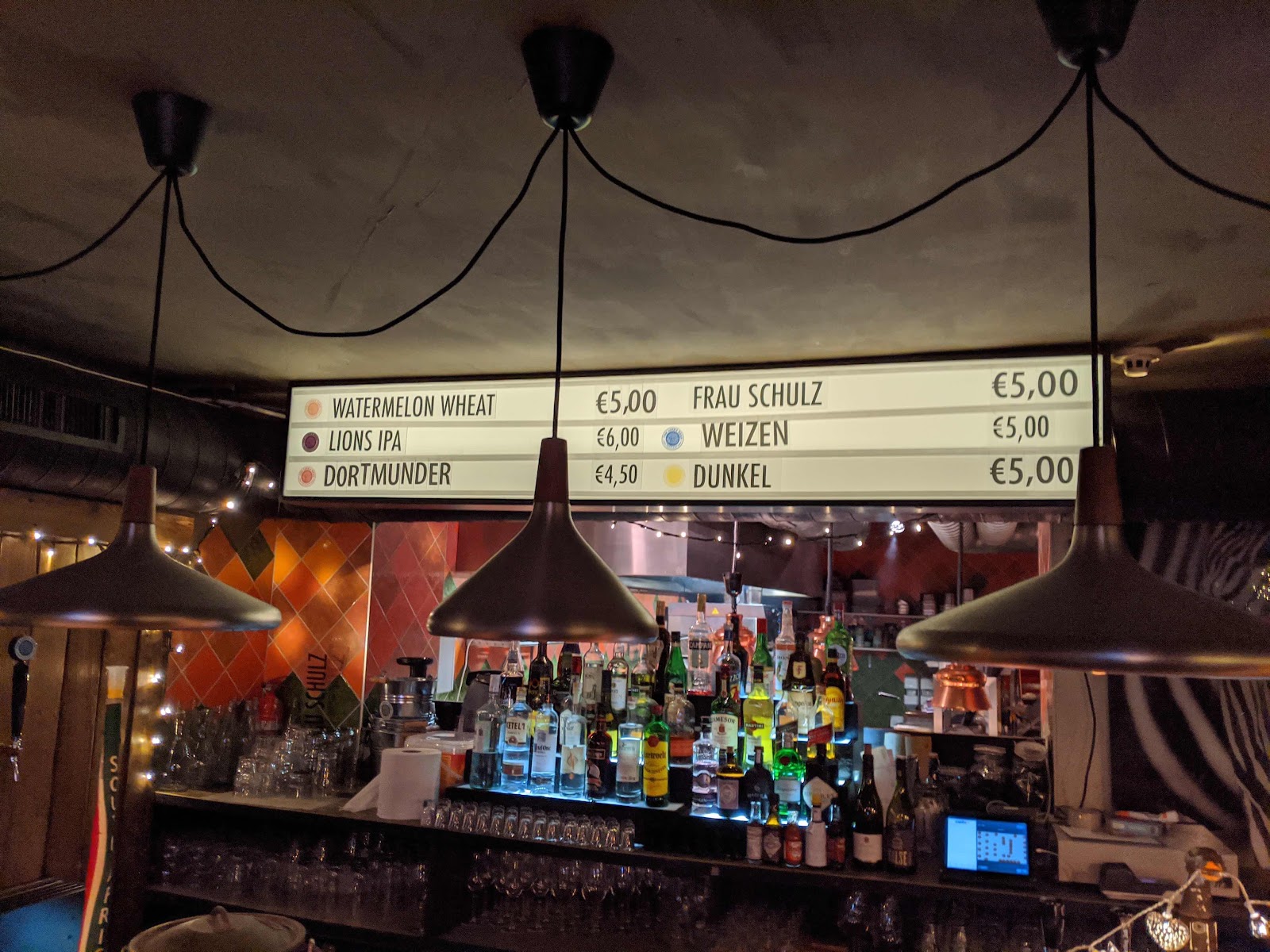 I ordered a sampler and some biltong to go with it. 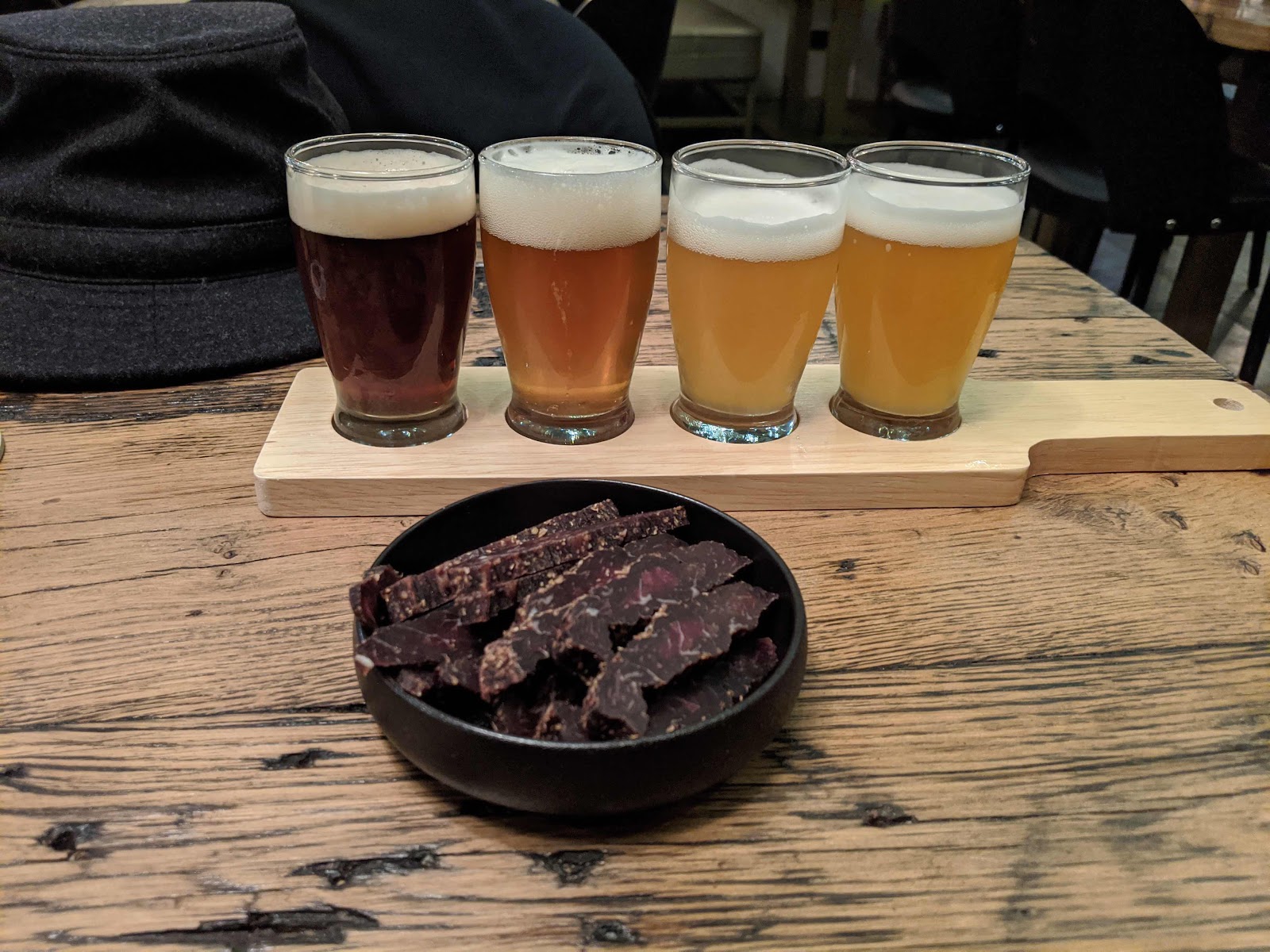 The beers were for the most part well made. There was a little bit of diacetyl in the dunkel but I am pretty sensitive to it and it didn’t really detract from the beer. The Weizen was very much in the German style and was good. The Watermelon Wheat was well made, but I’m just not a fan of that style. The watermelon was not overpowering and I could see people liking it on a warm day. The IPA was excellent — more on that later.
I ordered some dinner, their Peri Peri Chicken. It was very good, not too spicy but enough of a kick to let you know it was there. The only vegetable I’ve had these past few days were hops, so I sort of inhaled the greens. 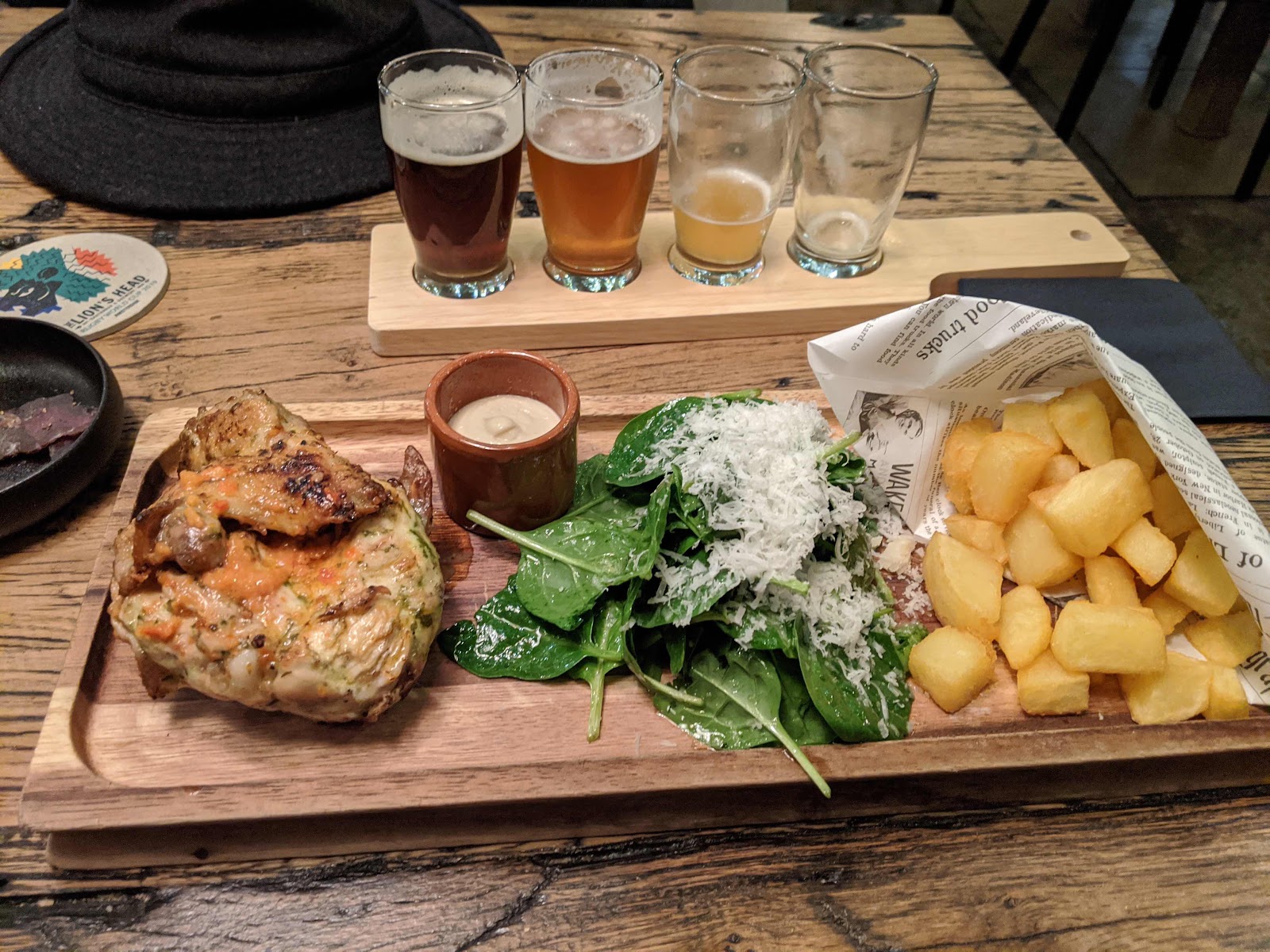 I ordered a full size (.4L) of the IPA, which turns out is more of a session IPA at about 4.8%. It had a really complex hop profile and when I talked to the brewer/owner he said he used mostly C-hops (Centennial, Columbus, Cascade, etc) in the boil, with late additions of the modern fruity varieties and dry hopped with Simcoe. It worked very well, giving a bit of a layered taste. I think it is the best IPA I’ve had in Amsterdam, though to be fair I haven’t been seeking out that style so don’t complain to me that your favorite is better. It might well be. 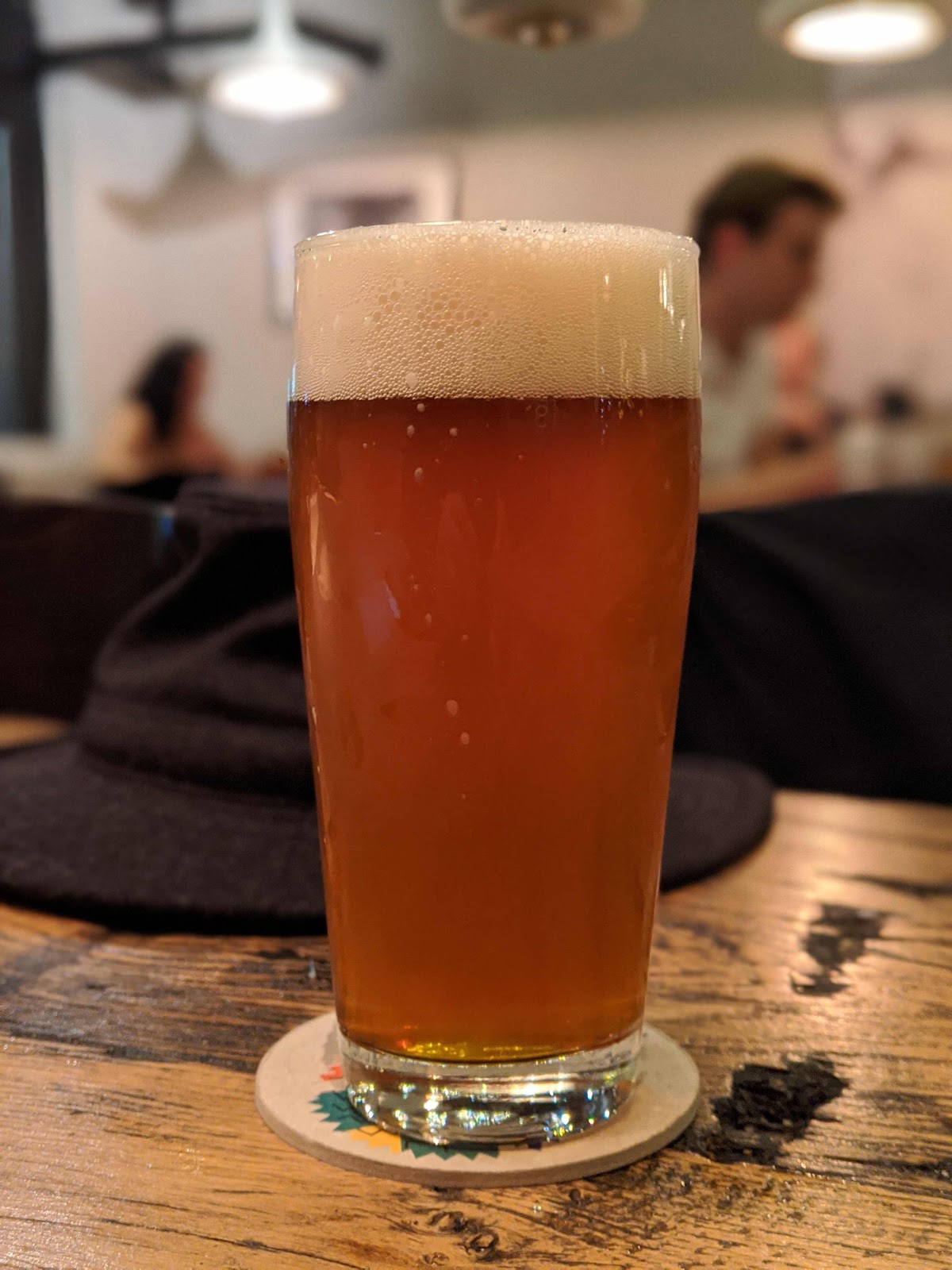 With that, four breweries or brewery taps I decided to call it a night. I had lots of good beer and only got wet on the inside, not on the outside. That is because I carried my umbrella, which is known for keeping the rain away.
Posted by The Mad Brewer at 2:34 AM