The plan was to meet Tom at The Northerner at noon, when they opened. On the way I passed De Pelikaan and decided to stop in for starter beer. The Pelikaan is handy for an early beer because they open at 8:30am. When jet lag has your personal clock out of sync with local time, finding a spot for an early beer is a good thing. 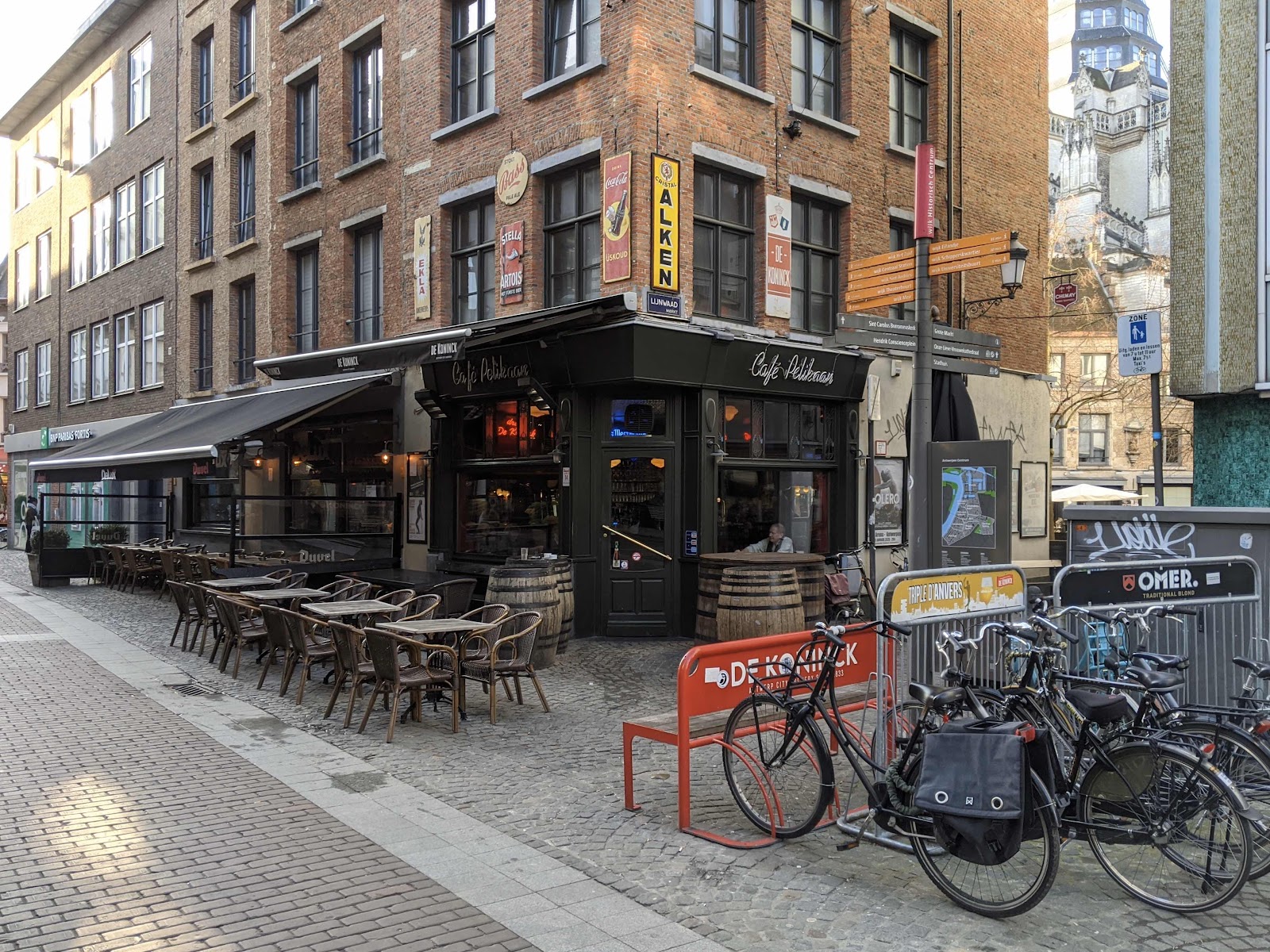 One hasn’t properly welcomed oneself to Antwerp without a Bolleke of DeKoninck. I guess since they renamed the beer itself “Bolleke” that is redundant these days. Anyway, it was good. 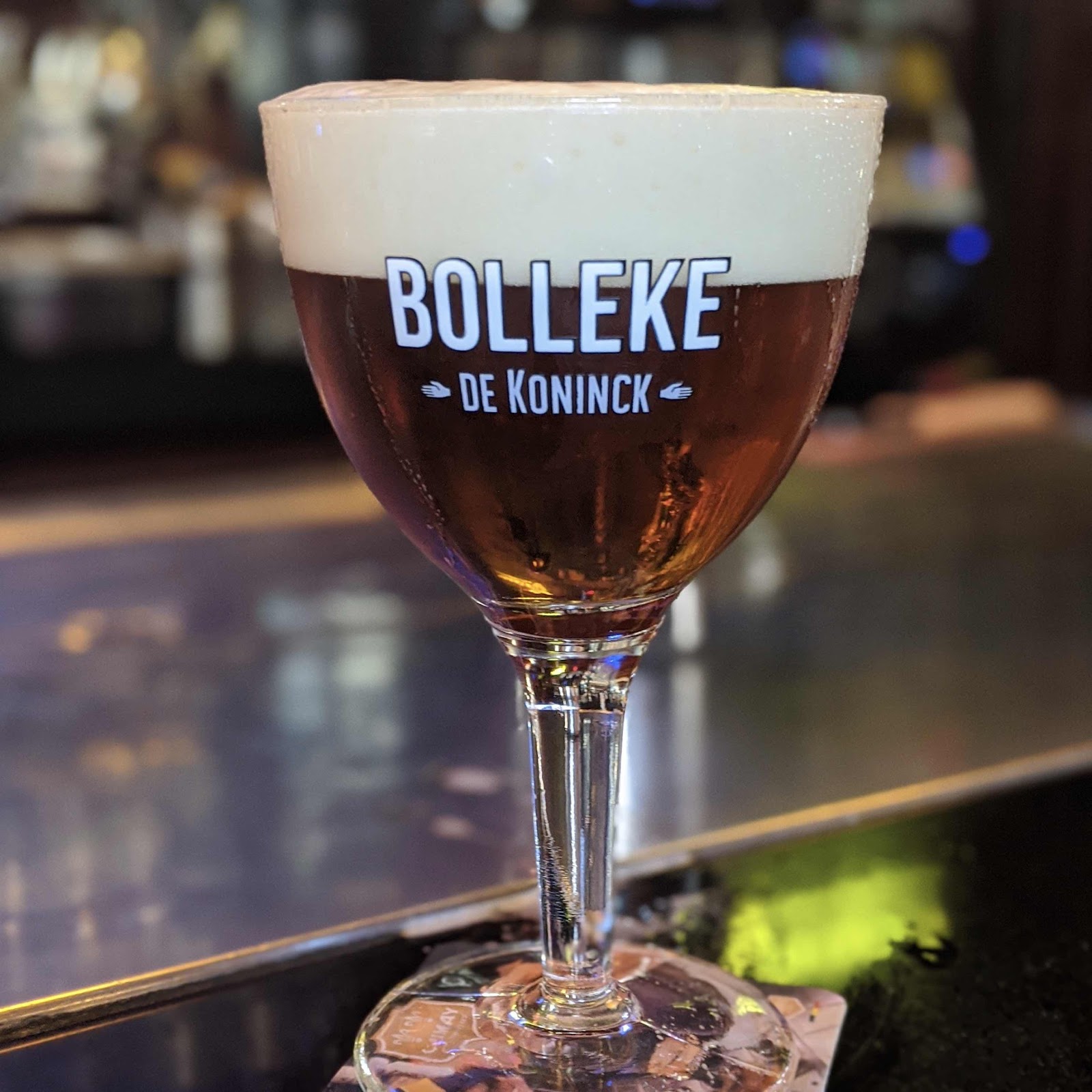 The tap list at De Pelikaan isn’t special but I always find something to drink. The Beer of the Month was a special beer Hapkin brew but I didn’t get the details. 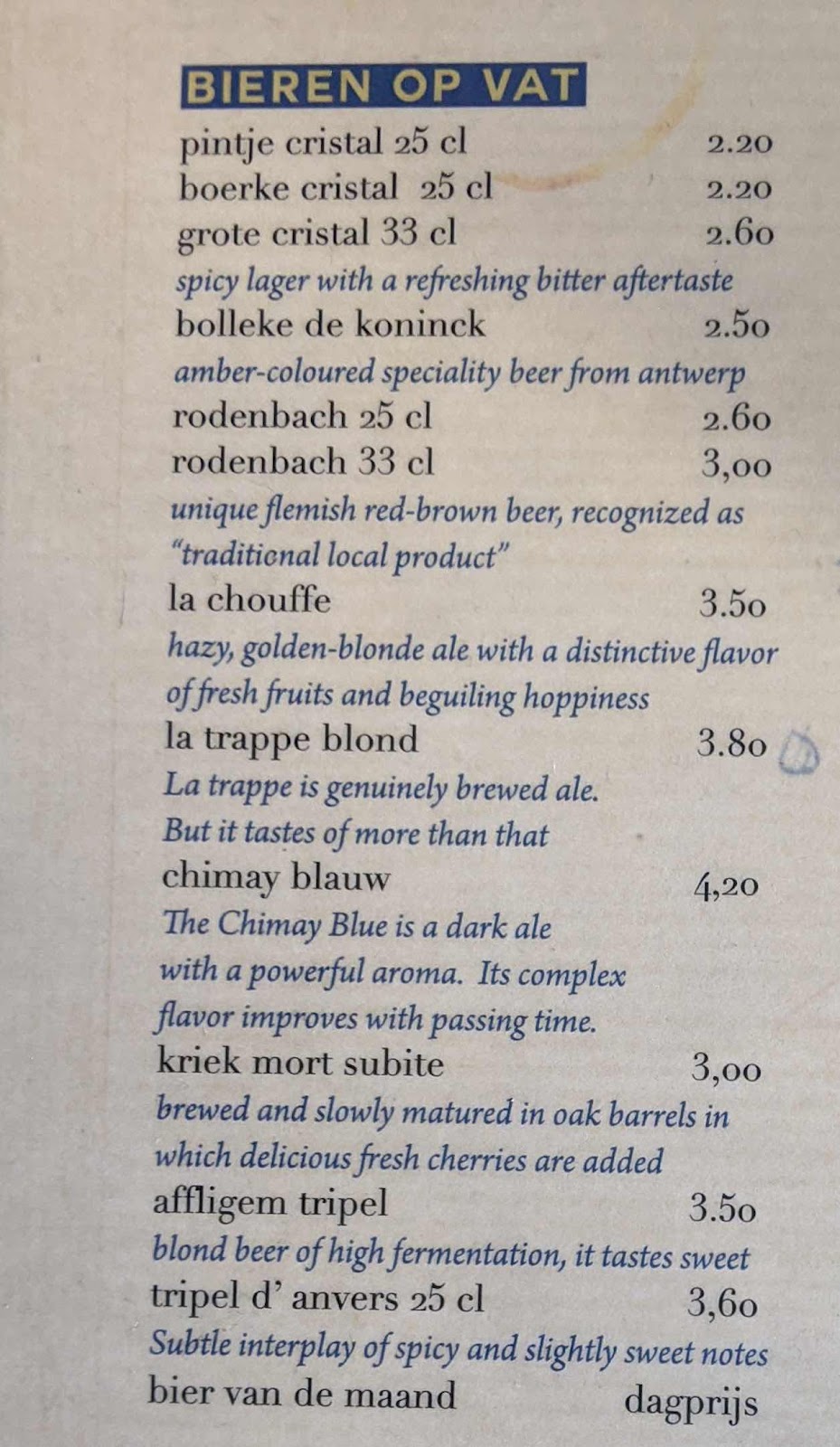 Somebody on Twitter pointed out that if you took all the blue descriptions it sounded like Samuel Taylor Coleridge poem.
It was just about noon so I headed over to The Northerner. This is a fairly new place, run by a couple, he from Northern Ireland (hence the name) and she from Belgium. It is a friendly place with good beers on tap and and improving bottle list. Worth stopping in when in Antwerp. 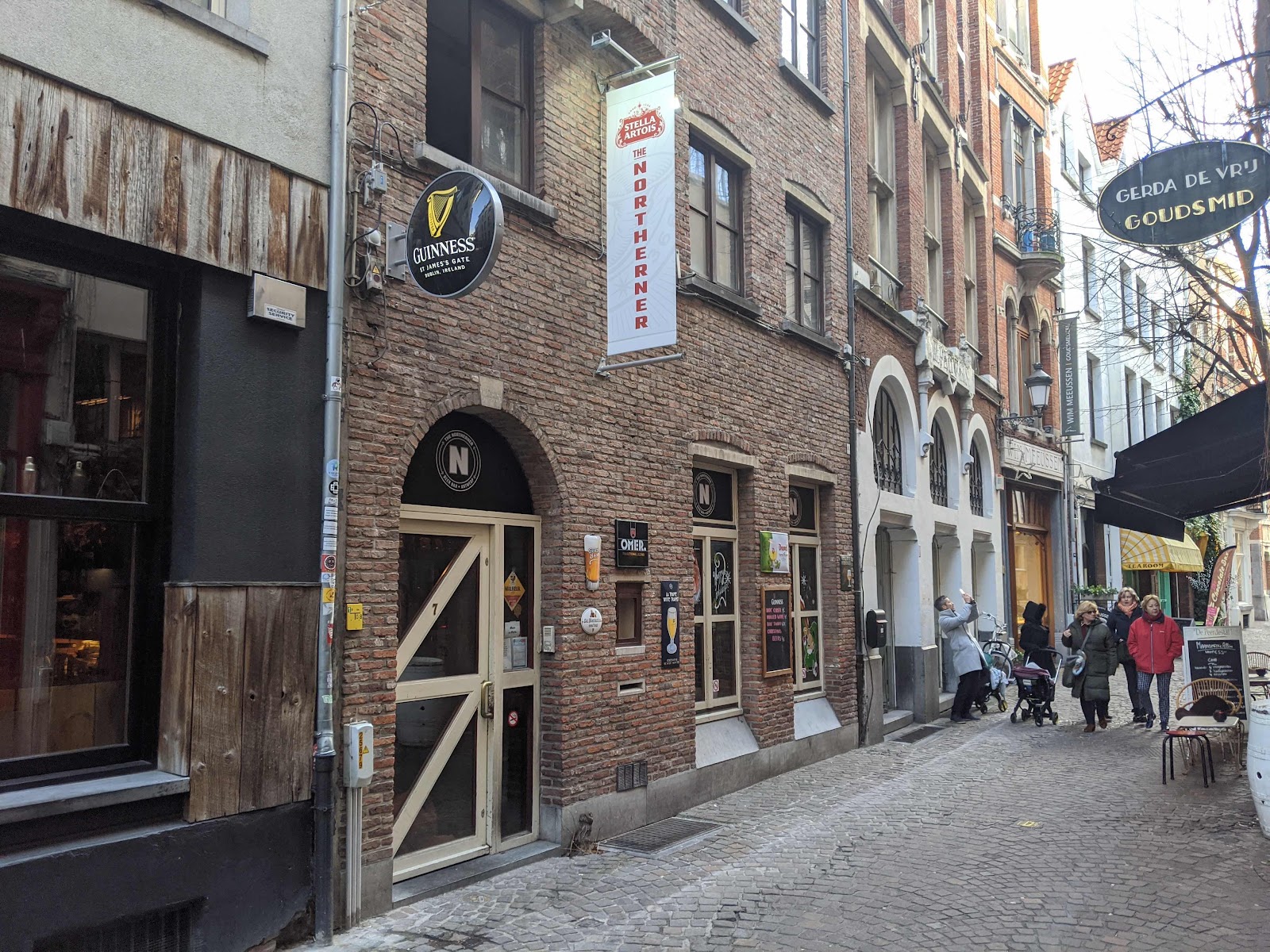 The Beer of the Month here was Paulaner Hefeweizen. 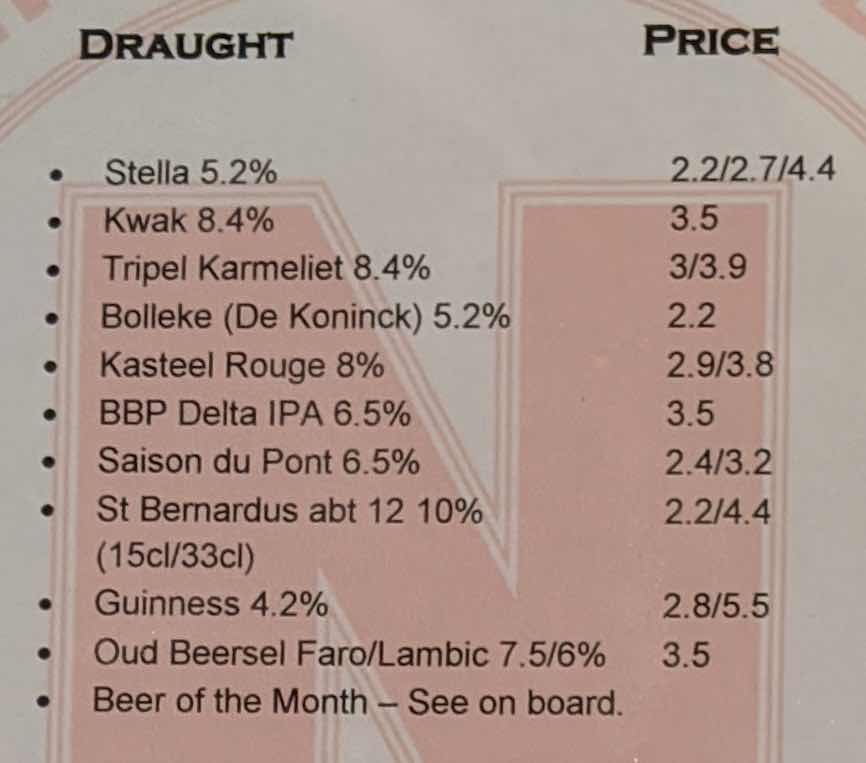 I started off with Saison Dupont. I had a little issue with my phone camera so the head had settled a bit in the picture below. 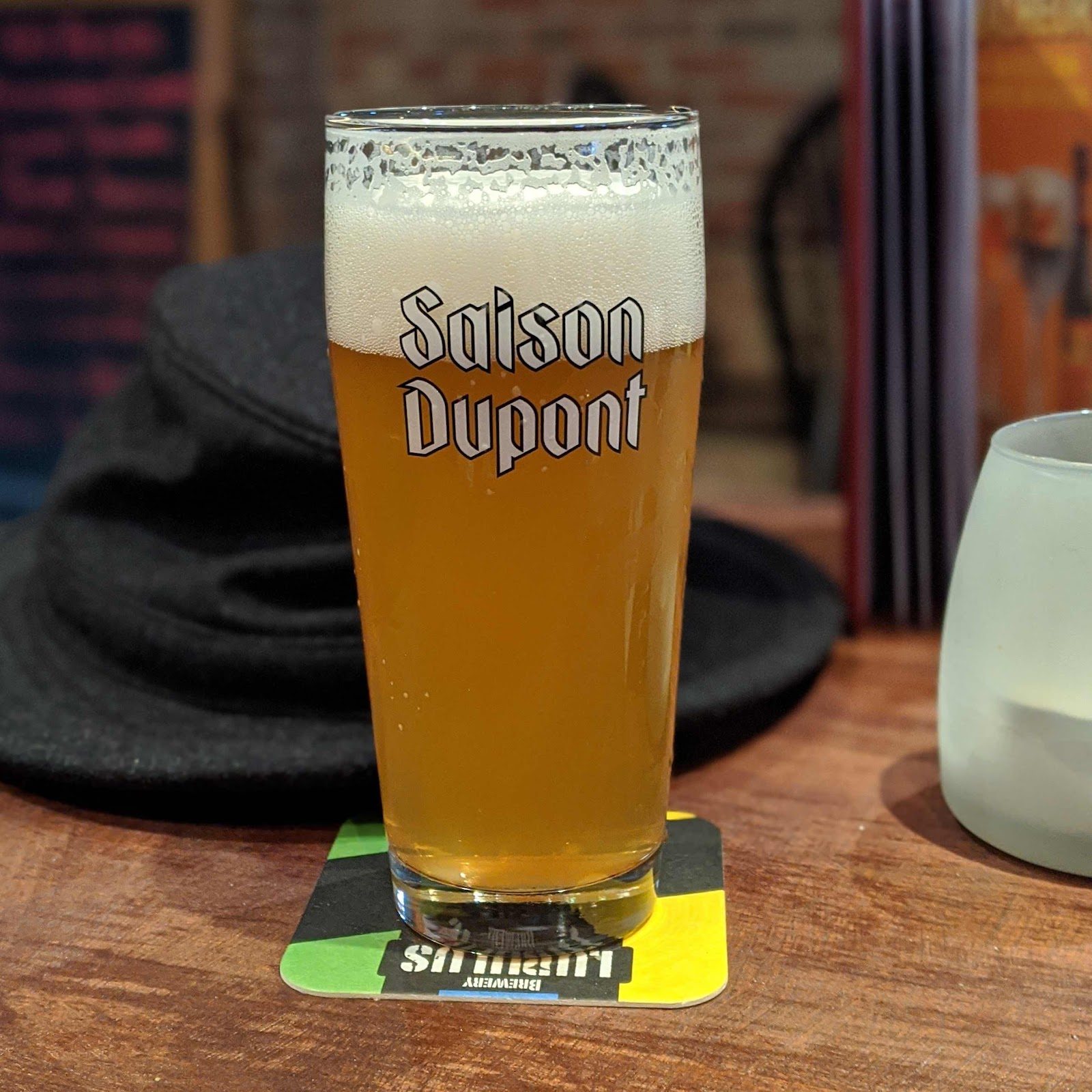 Tom had still not arrived. He often mistakingly called this place “The Highlander” which is a totally different pub up by the University (and next to ‘t Waagstuk). He doesn’t believe in carrying a phone so he had no way call for help or call up a map. Oh well, I wasn’t waiting for him, beerwise.  So I ordered the Delta IPA from Brussels Beer Project. 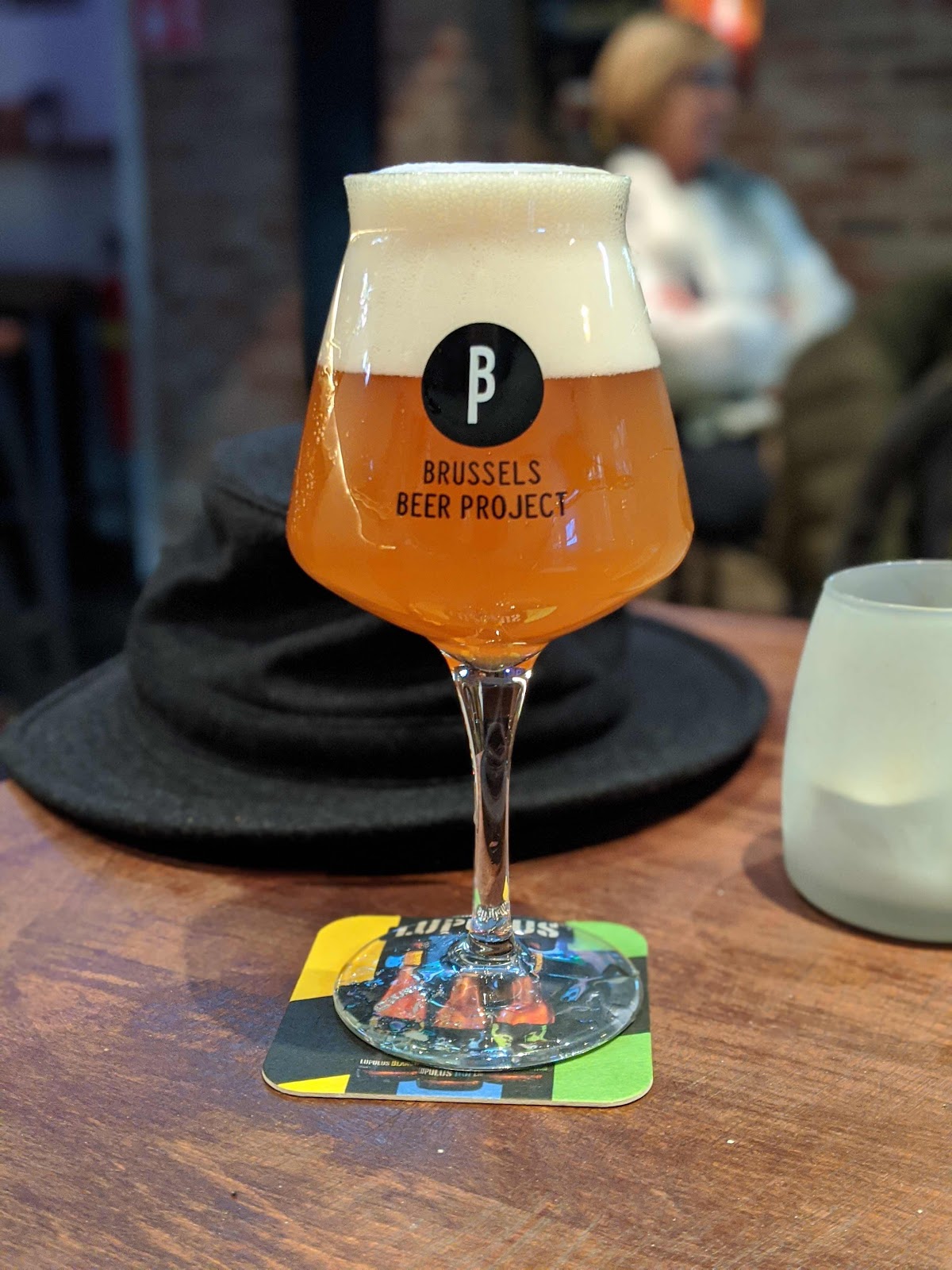 A nice IPA, nothing particularly stood out as “Belgian” though.
When The Northerner first opened that had a regular menu with Pulled Pork as the specialty. I guess that didn’t work out because now they just have the usual snacks plus a Croque Monsieur (a grilled ham and cheese sandwich). I ordered the Croque. 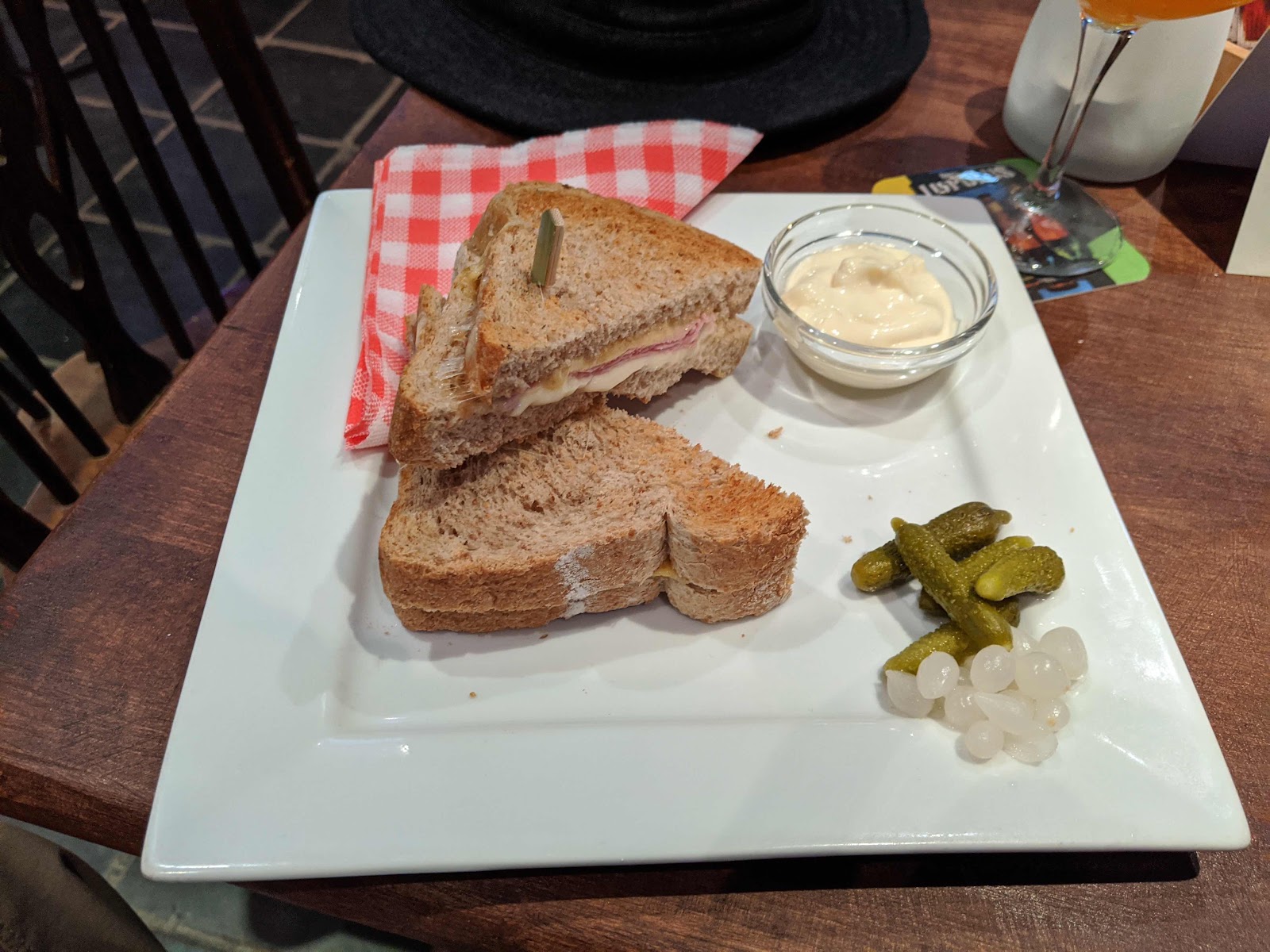 It was very nice, the bread was hearty and plenty of ham and cheese. I needed a beer to go with it, so I ordered a Dochter van de Korenaar Belle-Fleur IPA from their “Bottles about to finish” list. I have seen this at more and more pubs in Belgium, a list of beers than will soon be gone. 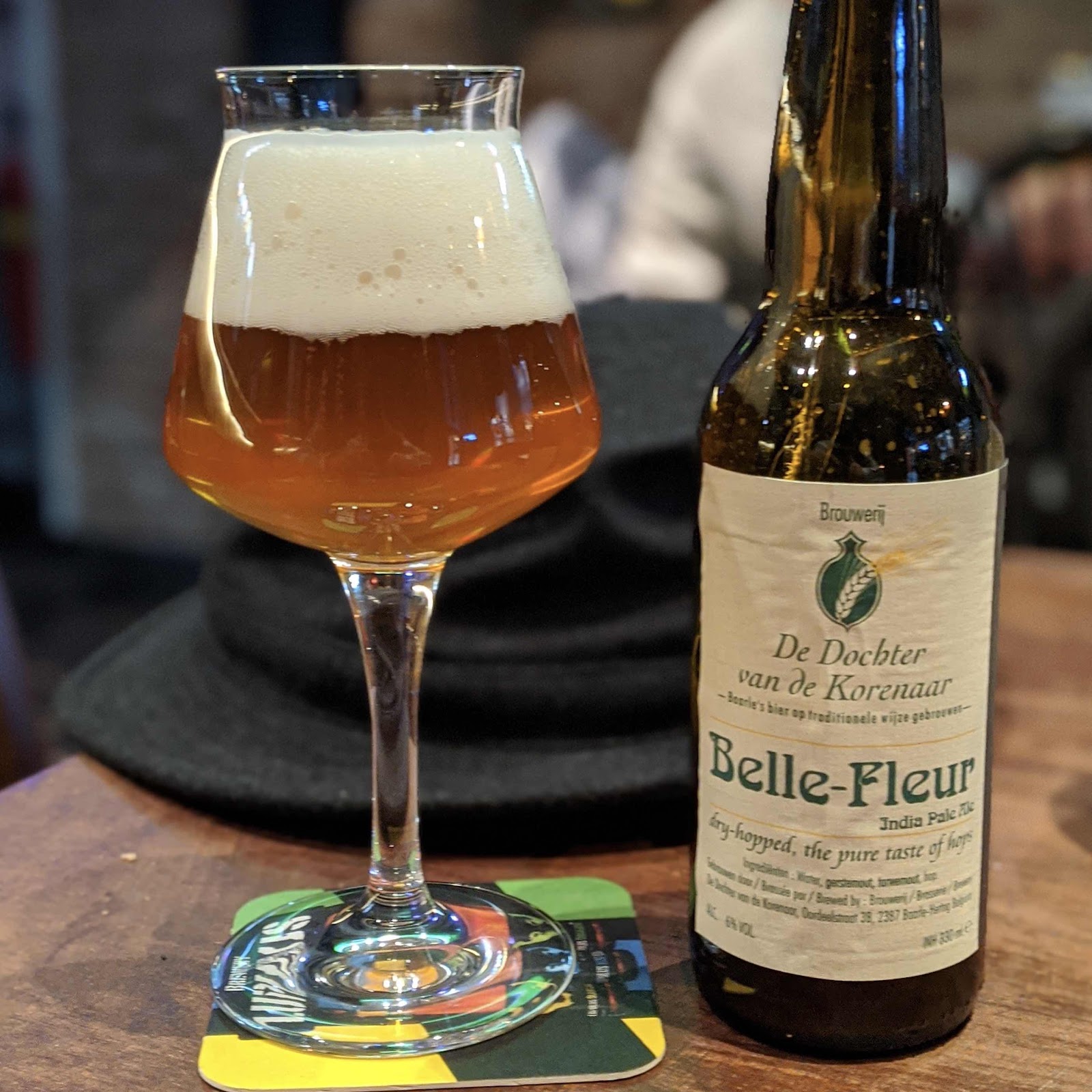 Well, it was now past 2pm and still no Tom. Luckily we had a fallback arranged, 2pm at De Ware Jacob. So I headed that way. Along the way I found out  Den Billeklester on Hogestraat had closed. That is sad news for me, as I always had a good time at that corner pub.
Soon I was at De Ware Jacob 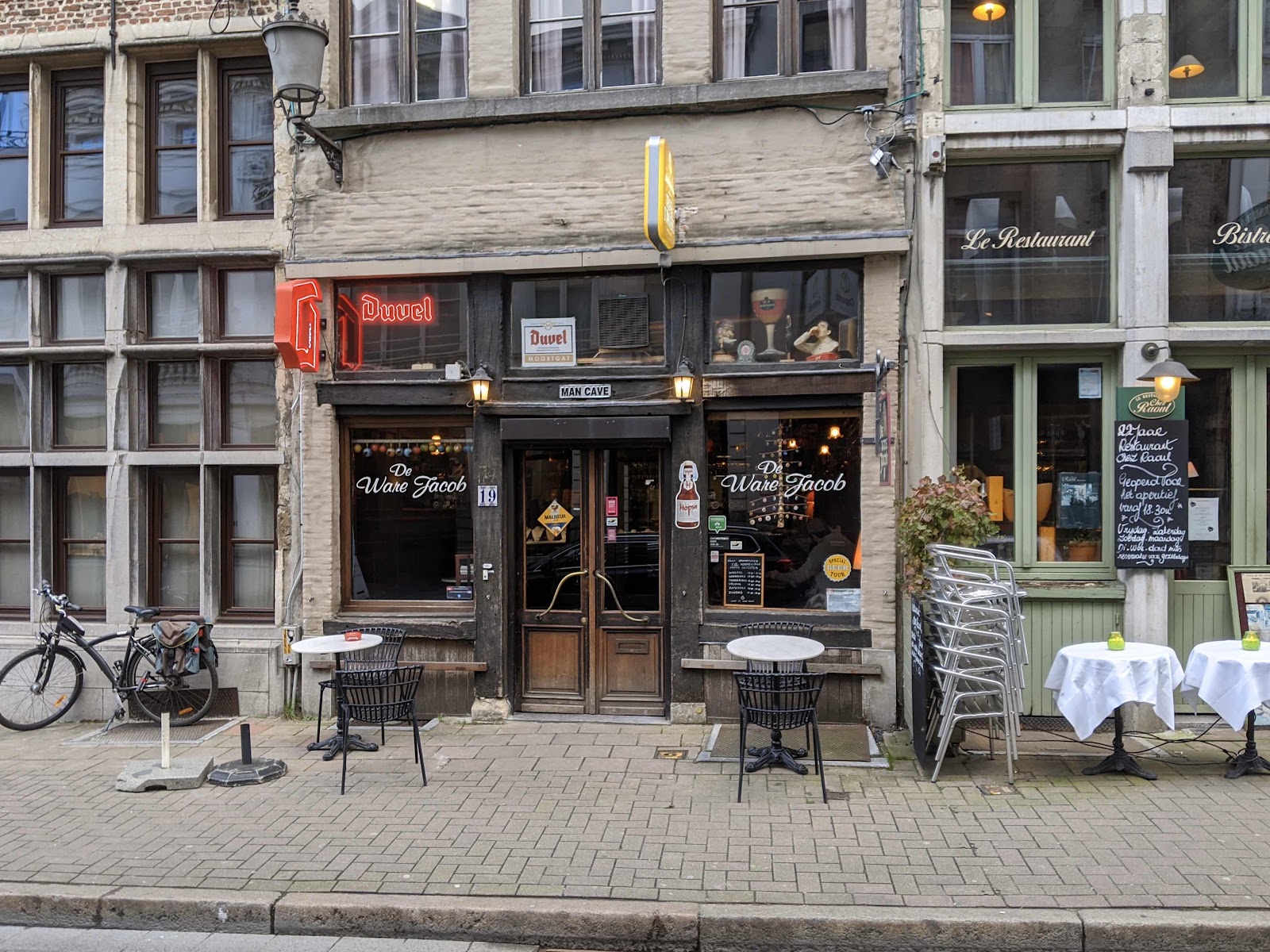 Tom was there, already working on a beer. He said he couldn’t find The Northerner after walking all over, so he just drank beer somewhere else.
De Ware Jacob only has a half dozen taps but they have Dupont Avec les Bons Vœux, the only place in Antwerp that seems to have it regularly. So I had one. 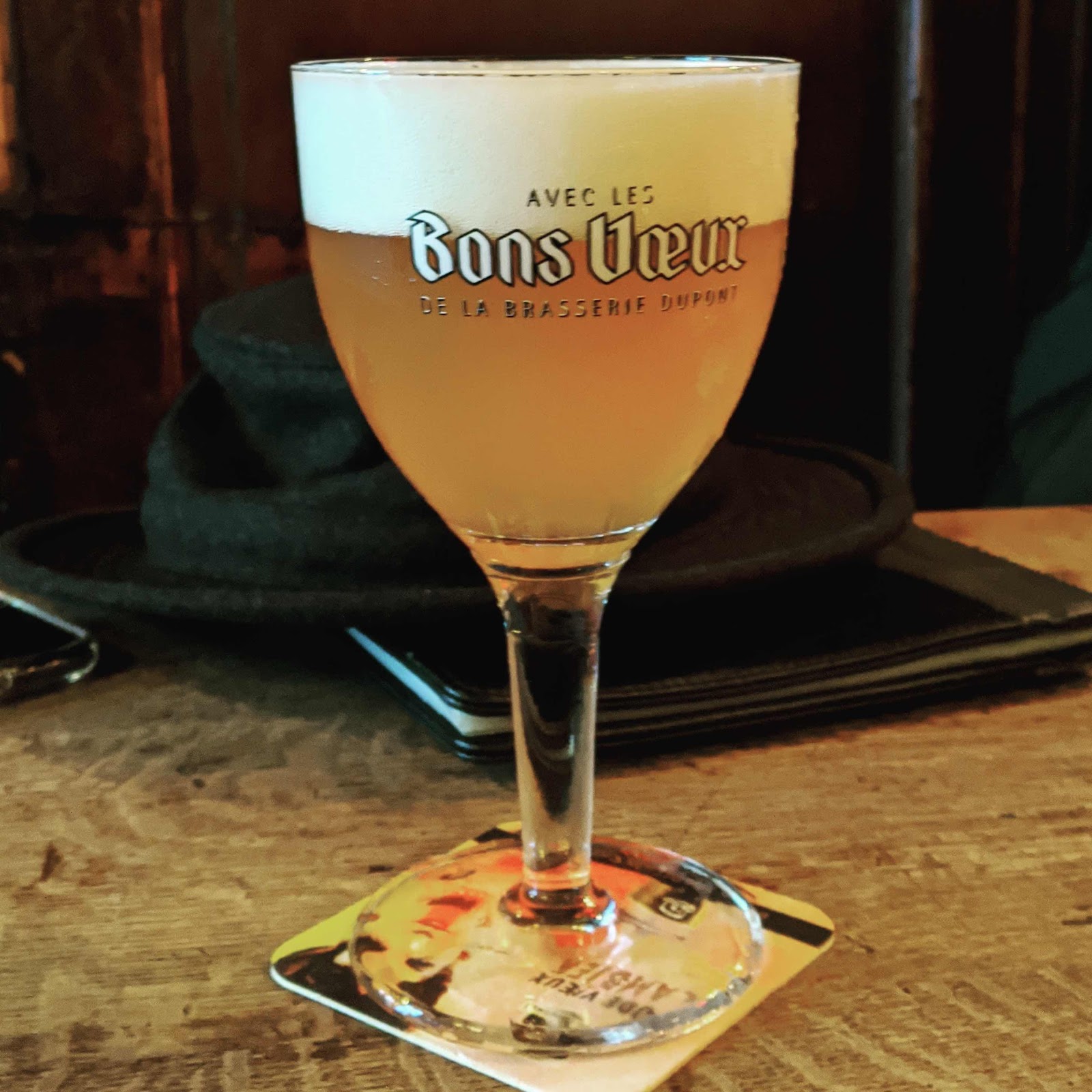 Actually, I had more than one but I won’t bore you with the pictures. This has become one of my must visit places when in Antwerp. Not just for the Bons Vœux but is just a cozy, friendly place.
We decided to give Dr Beer a try and headed up towards the harbor. It was open this time. 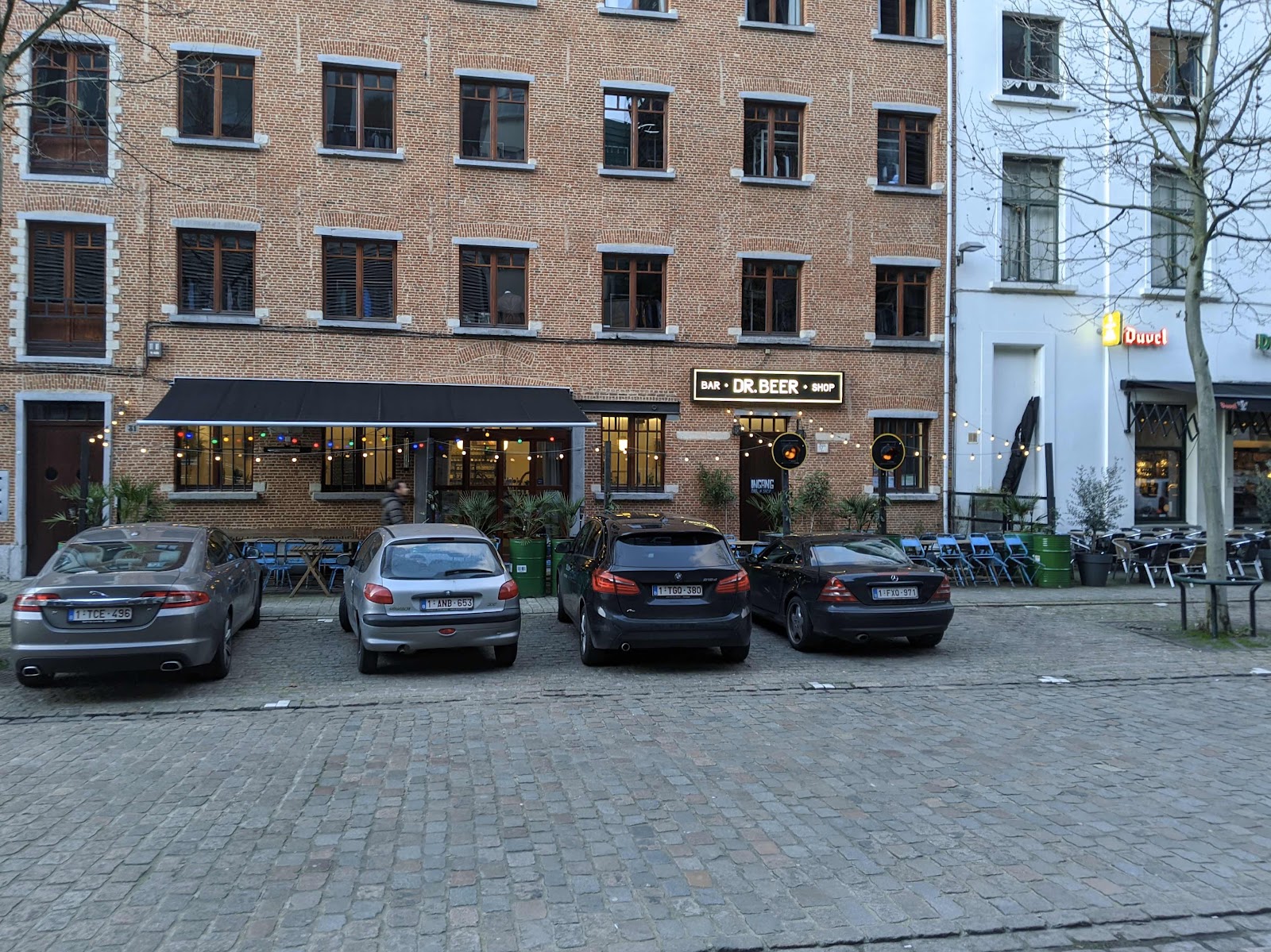 I was pleasantly surprised at the interior, very bright and comfortable. If I lived in the area I could see being a regular.
The draft list is pretty good as well. It looks like it rotates frequently 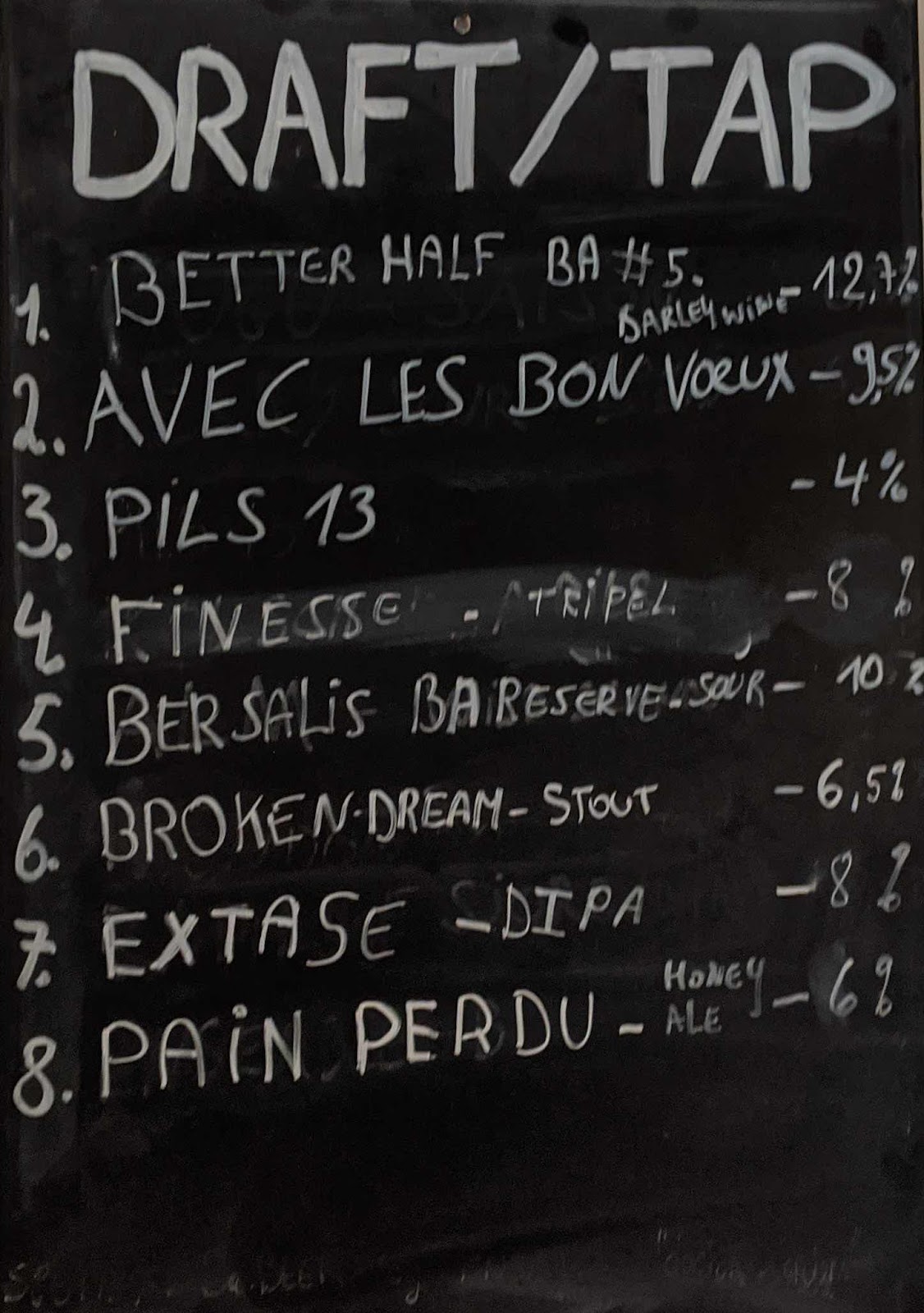 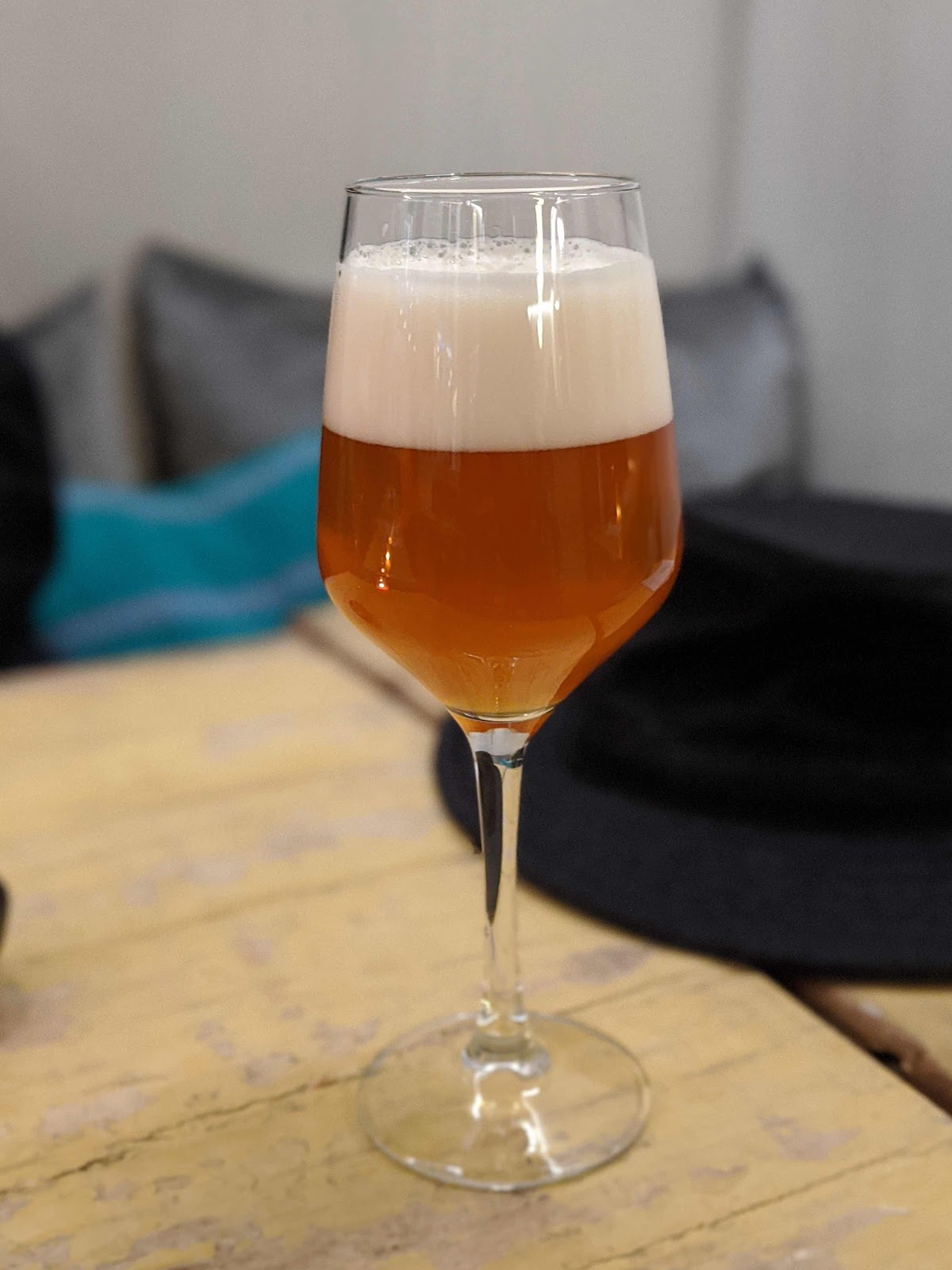 Since I already had had two beers from DvdK, I decided to go all out with their Extase Double IPA. It too was very nice but I ended up burping hops all night. I suppose that is a feature of a DIPA, not a bug. Originally I was told the plan for Dr Beer was food and beer parings but that didn’t work out for them and now they a large selection of cold snacks but no real meals. We had some smoked ham and old cheese and that tided us over. 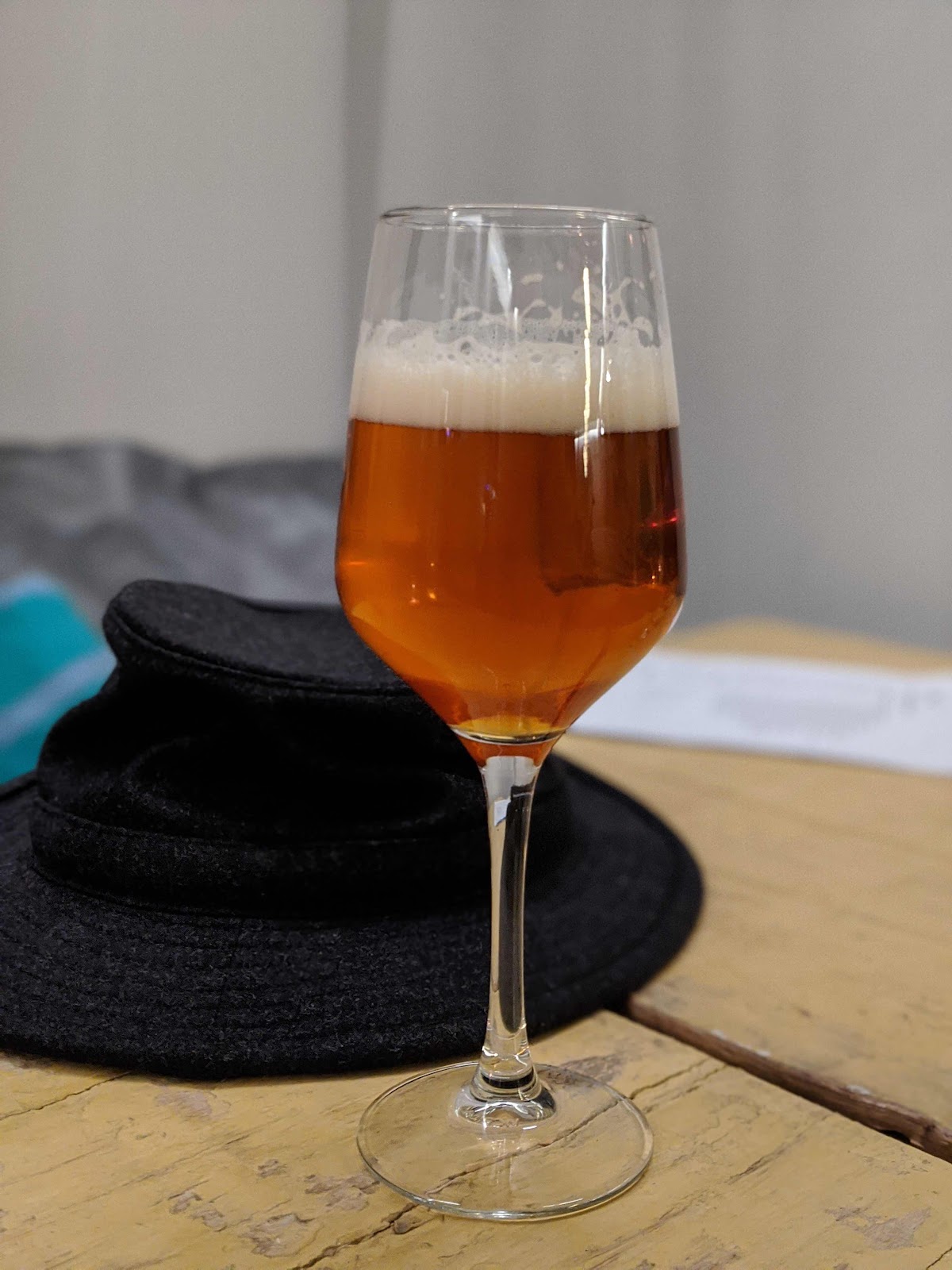 The Bons Vœux’s were catching up to me, so we decided to call it a night. On the way out we checked out the bottle shop and one bottle caught my eye... 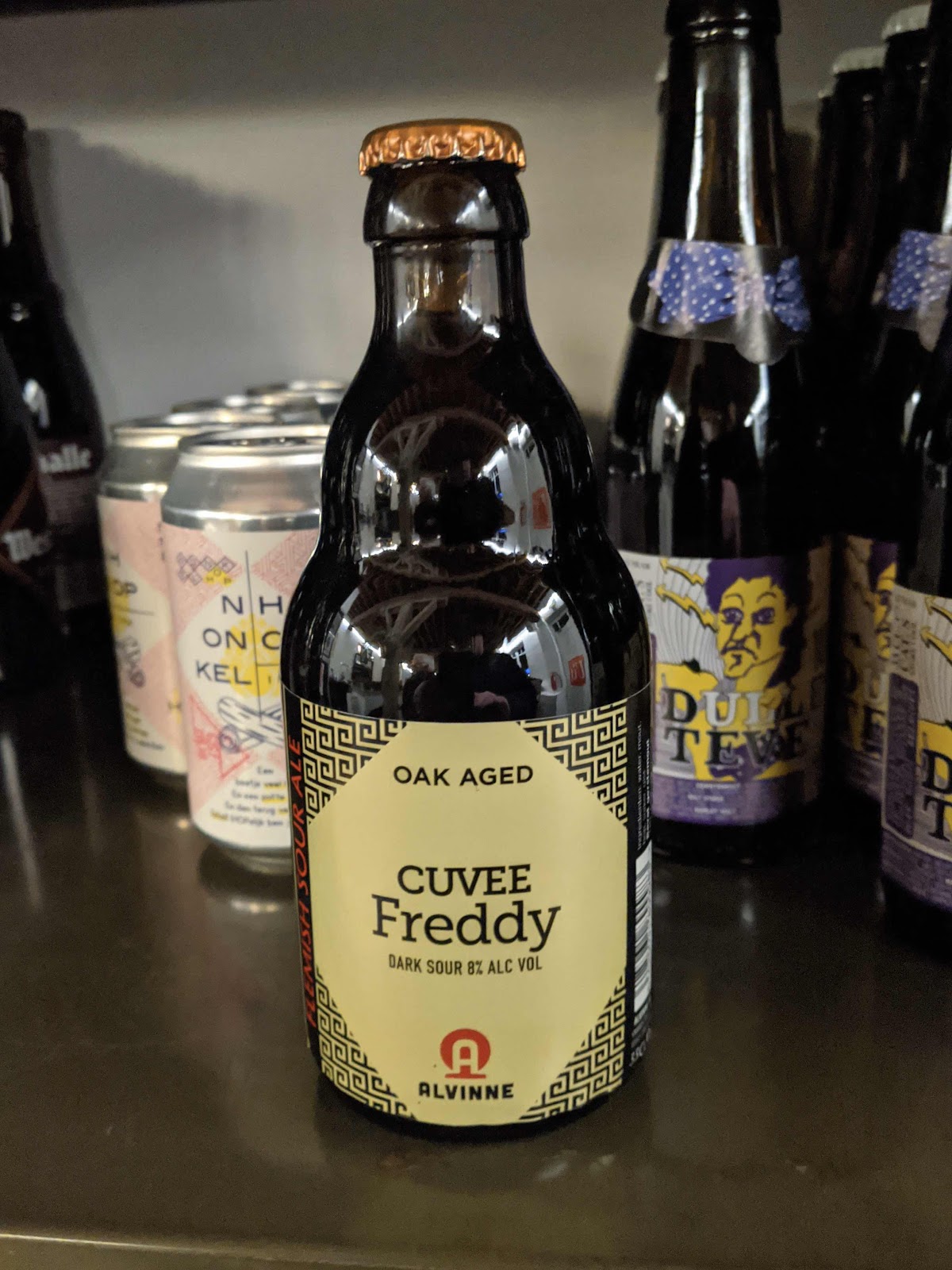 I know it wasn’t named for me — I am not that big a fan of Oak Aged beers.
Google maps suggested that we catch a nearby Number 17 bus for a direct shot to Centraal Station (where our hotels are). It turns out, though, the southbound 17 doesn’t actually go to Centraal Station but stops a couple blocks away (the northbound stops directly in front). By the time we realized that we were quite a bit south. Luckily there was a stop with some trams and we soon were on a Number 2 tram to Centraal Station. A bit more adventure that I wanted but all turned out well. Dinner was fast food so no pictures.