First post of the new year!
My last post of last year was in Antwerp as well, five weeks ago. If you remember, I made it an easy day because a felt a cold coming on. Boy did I. A few days after I got back home I came down with the chest cold from hell that knocked me out for three weeks or so. Still was not 100% recovered and here I am heading back to Antwerp. The things I do for my readers...
The flight was LAX-JFK-BRU on Delta. Believe it or not, I don’t travel as much as I used to and don’t have the super high powered frequent flyer status that let me often ride in the front part of the plane. So I was in coach, and my section was absolutely full, so no empty middle seat beside me. The flights were uneventful from a technical standpoint — not too bumpy and no delays, just the usual 45 minutes on the taxiway at JFK.
After clearing passport control, claiming my bag and clearing customs (which in Europe is walking thru the exit that says “Nothing to declare”) I came across this mural in the arrival hall. Some times it is good to be reminded why I do this... 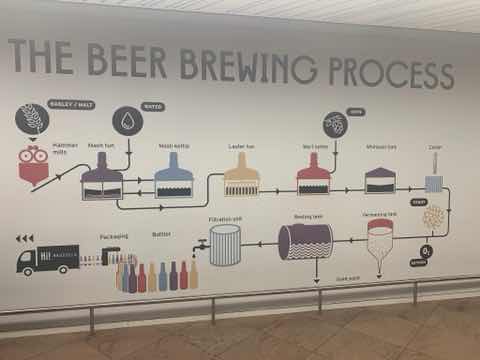 For years the fastest way to get to Antwerp from the Brussels Airport was the  “Sabena Bus.” Even though Sabena Airlines is long gone, many old timers still call it that. Leaves on the hour just outside the exit to the parking ramp and drops you off at Astridplein in about 45 minutes. The price has been a constant €10 since the Euro came in.  But it was 15 minutes after by the time I cleared everything so that was a 45 minute wait, in which time I’d probably fall asleep. Luckily, a few years ago Belgian Rail put in a new line directly from the airport to Mechelen (and thence to Antwerp). It takes 30 minutes and during the day there are three trains a hour. It costs a little more, €11.70, partly because there is a surcharge to pay for the new line. The ticket machines only take chip and pin credit cards so that often makes things complicated for US visitors. Luckily, there is an App for that. I fired up the Belgian Rail app and quickly bought a ticket, snickering inside at the long line of Luddites at the ticket machine. (Not really, but it sounds good).
Everything else was uneventful. My hotel room was ready, so I even got in short nap before I had to go meet Tom, who flew a different itinerary. Our planned meeting point was Beerlovers Bar at 3pm, which is when they opened. 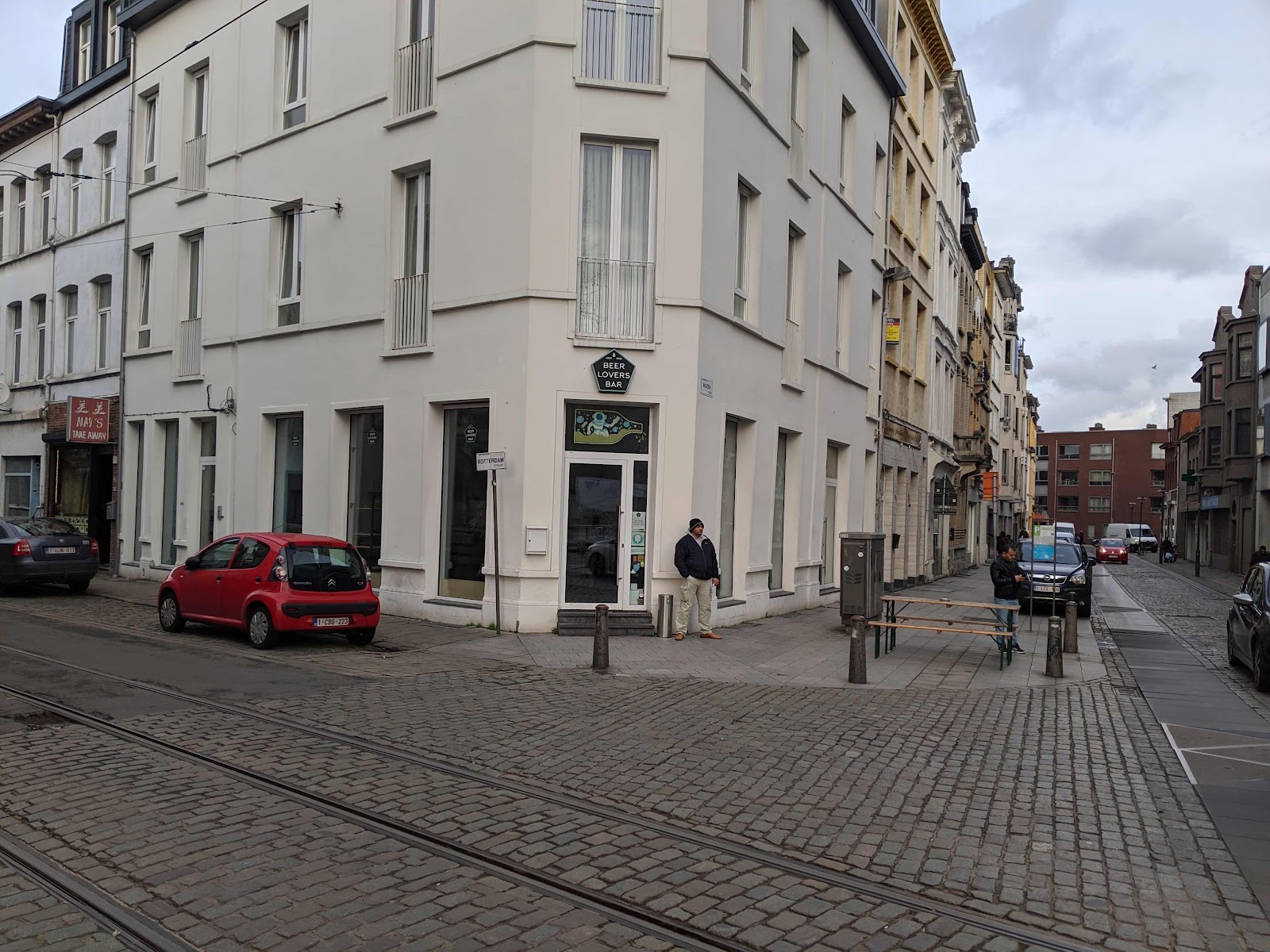 When I got there a few minutes before that guy was standing there in front of the door with a bunch of papers in his hand, as if he was about to deliver something. I sat at the bench out front and Tom came over and we waited. At about 5 past 3 o’clock I said, maybe we should try the door. Tom said, no that guy has been waiting a while. So we waited another 5-8 minutes or so then a couple with baby carriage came by, pushed open the door and went in. Turns out that guy was waiting for something/somebody else. Some phrase about the word “assume” comes to mind.
Beerlovers has really upped their bottle list but I usually go for draft beers at the start. A nice selection there, from all over Europe. Which can be a small problem if you are mainly interested in Belgian beers. 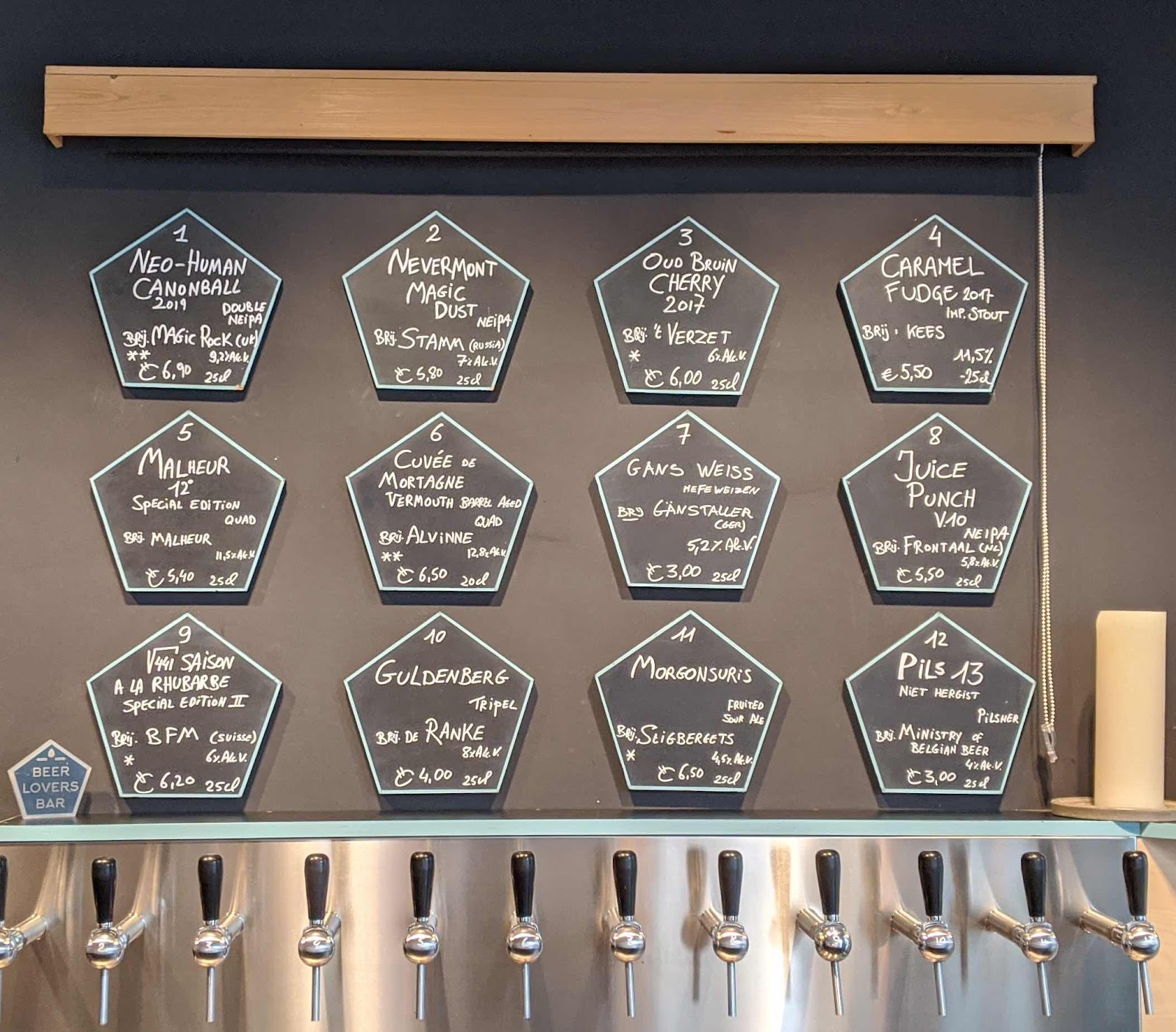 I had had the Pils 13 on my last visit and thought it was great, so I started with that. 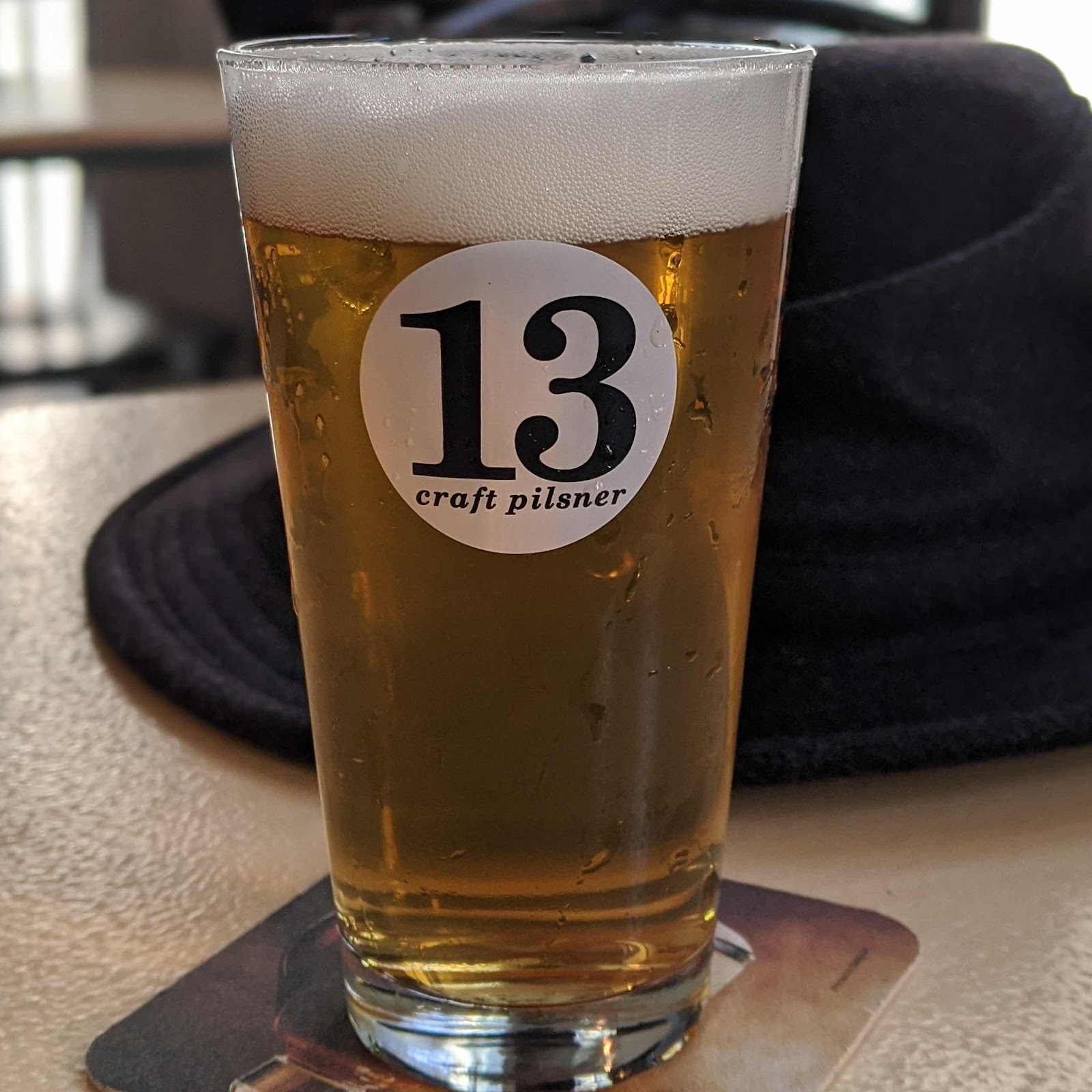 As it was before, a really nice beer. More in the German Pils tradition than the Czech but quite nice.
Number 7 was a surprise, the Gänsteller Weiss from Andy Gänsteller in Schnaid (near Bamberg). I have seen his beers in Copenhagen and Stockholm (and heard about them being often in Rome) but this is the first time I’ve seen them in Belgium. So I ordered one so support Andy. 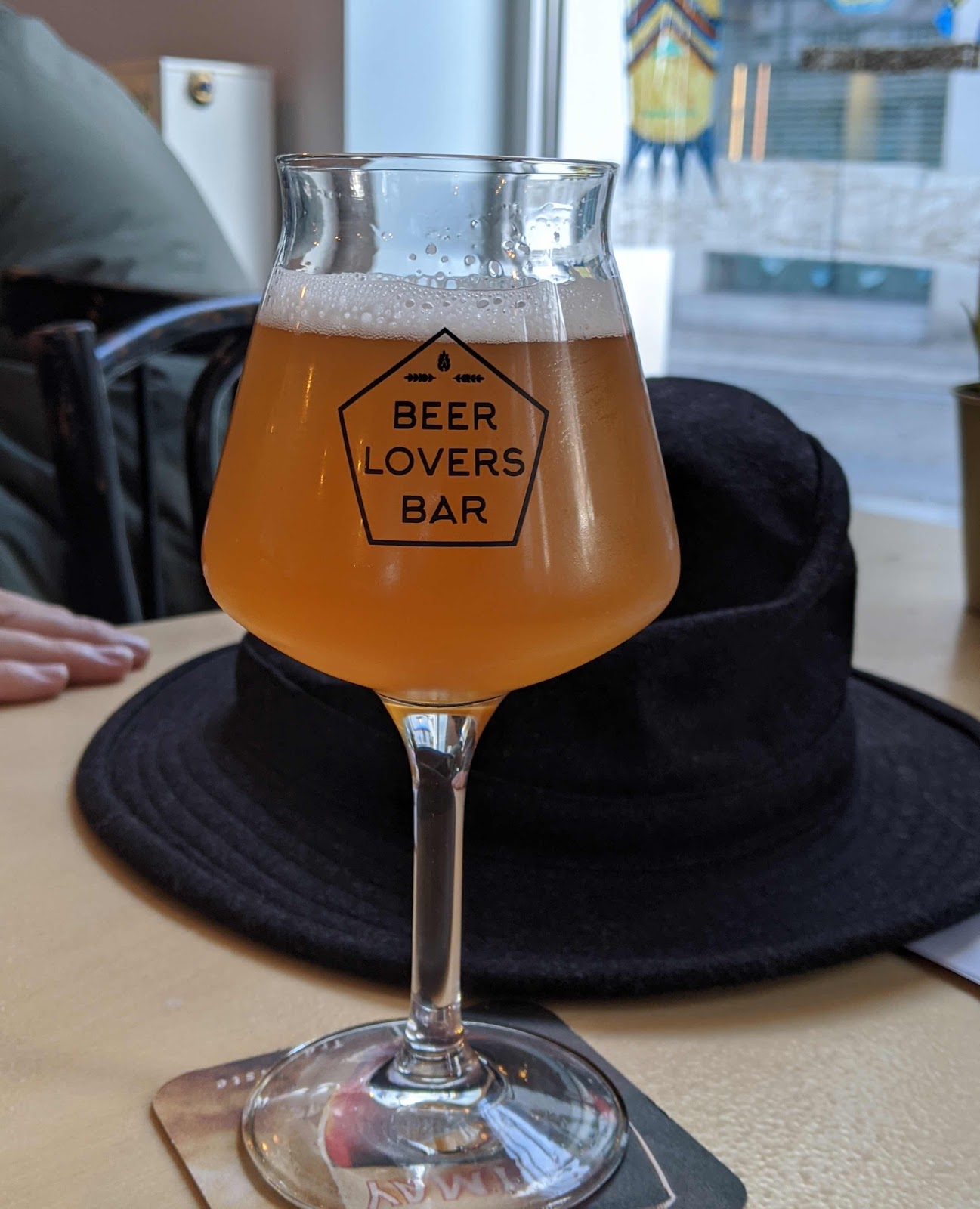 It is a bit mild for a German wheat beer, in terms of the clove phenolics and the banana esters, but as you’d expect, a very nice beer. The barman said they’d had the Kellerpils before and it was very popular. He told me “there are lots of really good beers from that part of Germany” — you don’t say. He added “and they are really cheap.” I don’t come to Belgium for Franconian beers but it wouldn’t pain me to see them served in a wider area.
I finished up with De Ranke Guldenberg, always a good triple. Tom tried the Kees Imperial Stout — which I would have tried except for the “Caramel Fudge” part. I really like Kees’ beers but this sounded like an alcoholic candy bar and smelled like one, too. The Carmel Fudge was a bit less in the taste but it still overpowered the beer. I know I am old school (as well as just plain old) but I do like my beer flavored beers.
The Guldenberg was spot on. 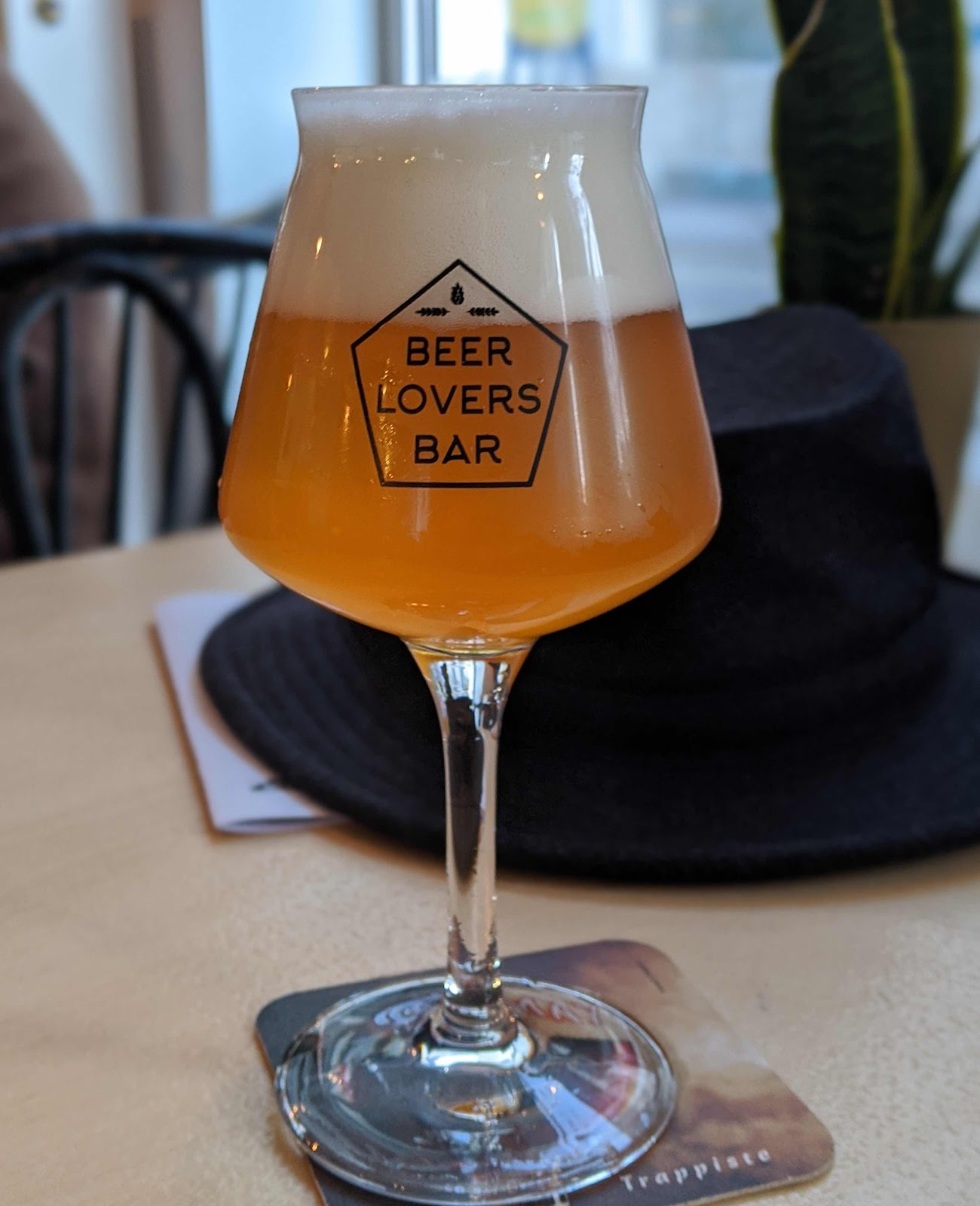 Tom too had a hard flight, so we decided to grab a bite to eat and call it a night. We stopped at the VietPho place and both ordered Lemongrass Chicken Pho.  I was so hungry I forgot to take a picture, so I’ll leave you with one I took in December of the same thing. 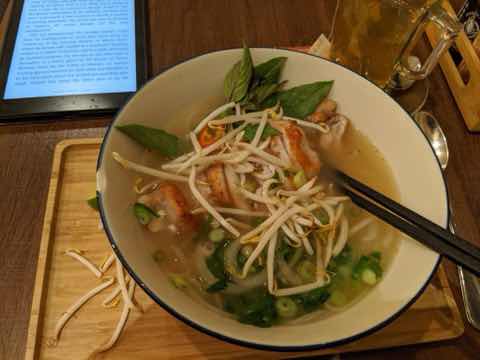