I’ve been a fan of Rascals beer for a while, and I was excited to hear they had opened a taproom at the brewery. It is definitely out in the ‘burbs but it is any easy walk from the Black Horse LUAS stop (Red line) and there is a bus stop even closer. The number 13 bus left a couple blocks from my hotel and dropped me at the entrance to the industrial park where brewery resides. 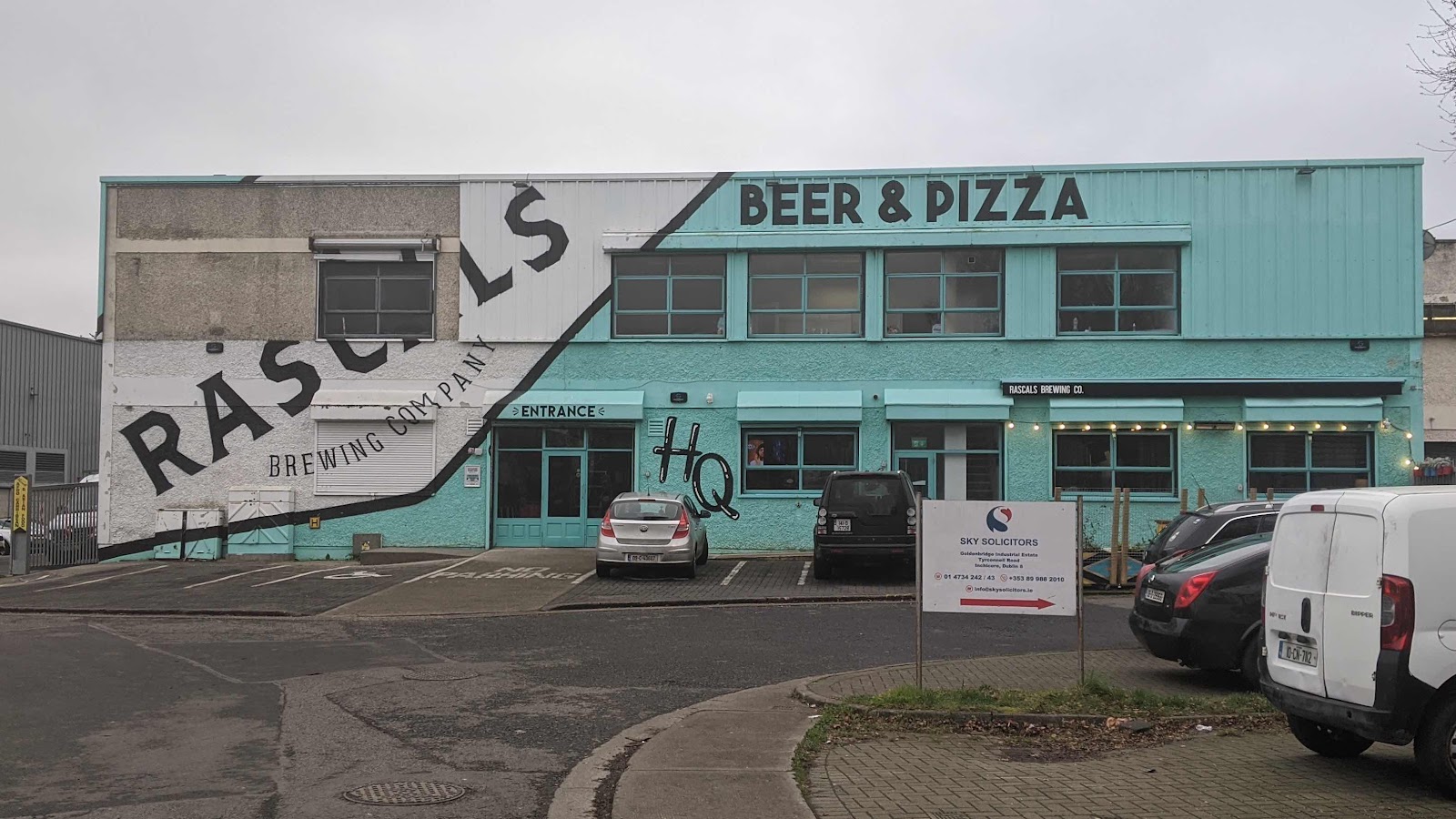 They had 14 beers on tap. The Happy Days and Yankee White IPA are their flagship beers — you see them all over town. 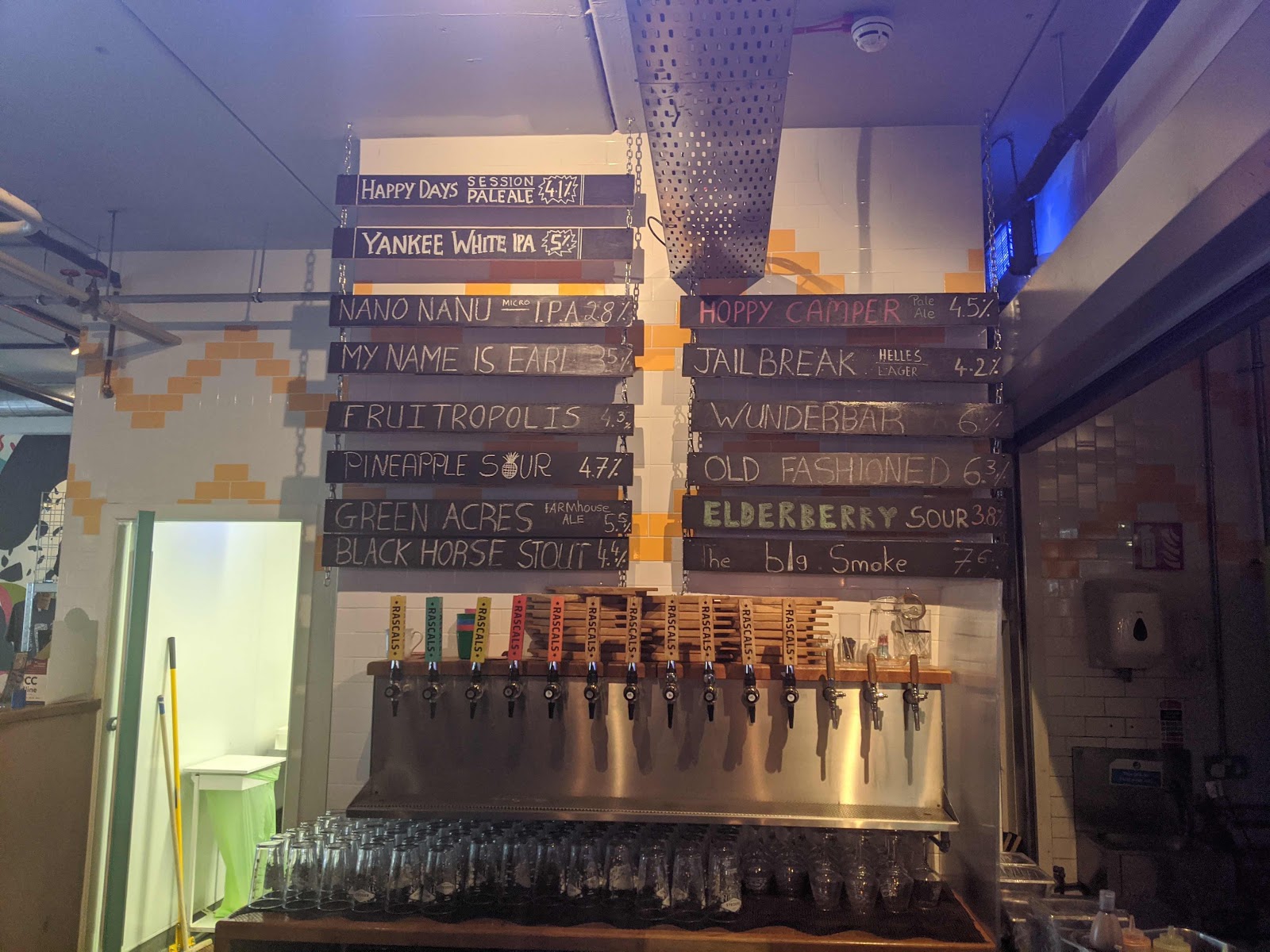 They have a couple of fixed samplers (at a discount) or you can build your own. I built my own with the Nano Nanu “Micro IPA” (2.8%), the Jail Break Helles, The Hoppy Camper Pale Ale and the Big Smoke, which is a barrel aged Imperial Stout. 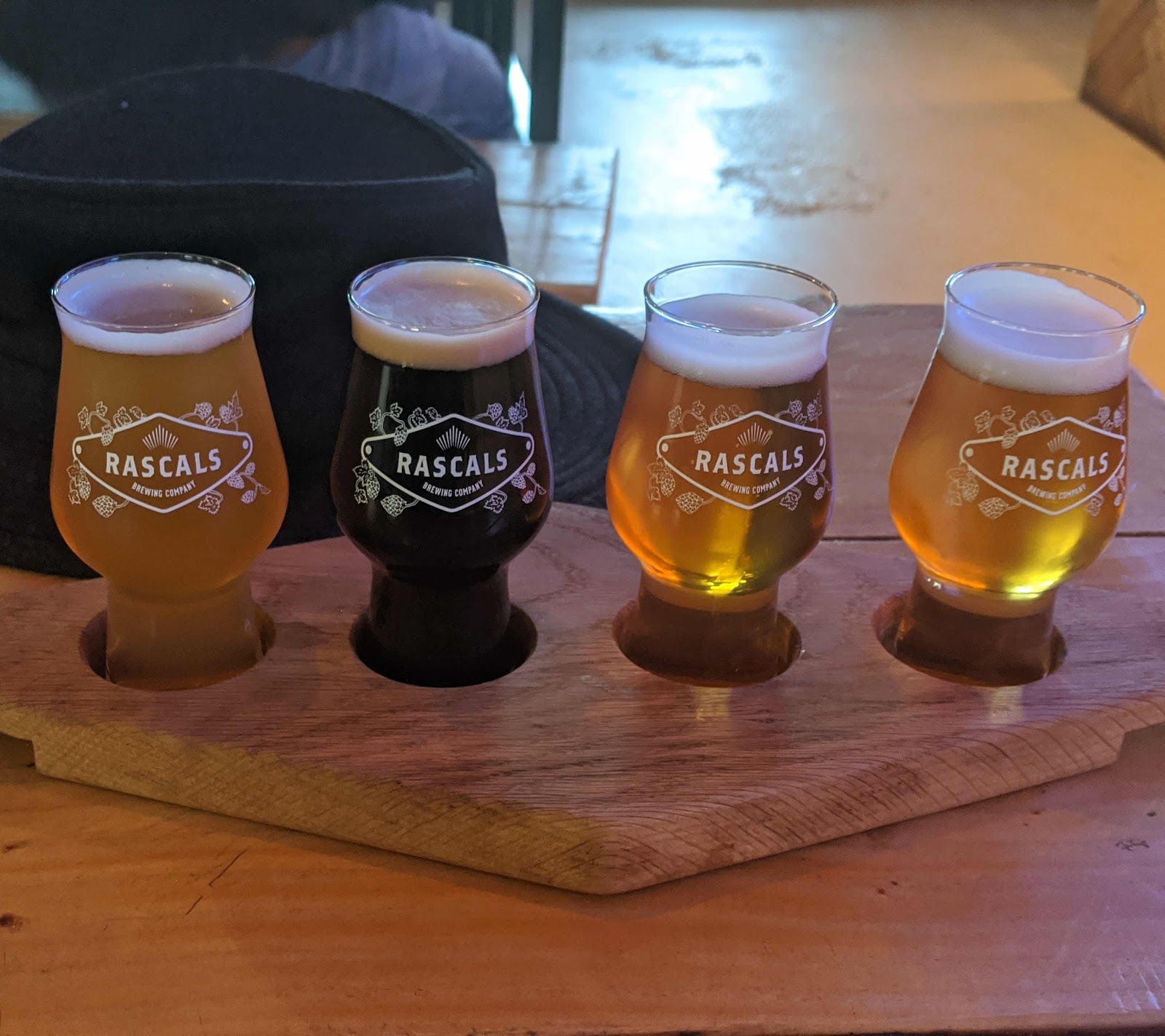 All were good. I was really impressed with the Nano Nanu — lots of flavor and little alcohol. More breweries need to brew beers like this (and more are). The Helles was clean and nicely soft. When visiting a new brewery I will often try a lager (if they have one) as if that is OK it is a sign that they have the brewing process down (not that I was worried about that with Rascals)

The food menu is basically pizzas and salads with some snacks thrown in. These were real handmade pizzas and the oven is prominent behind the bar. This one was called the “Hogfather” with various pork products. 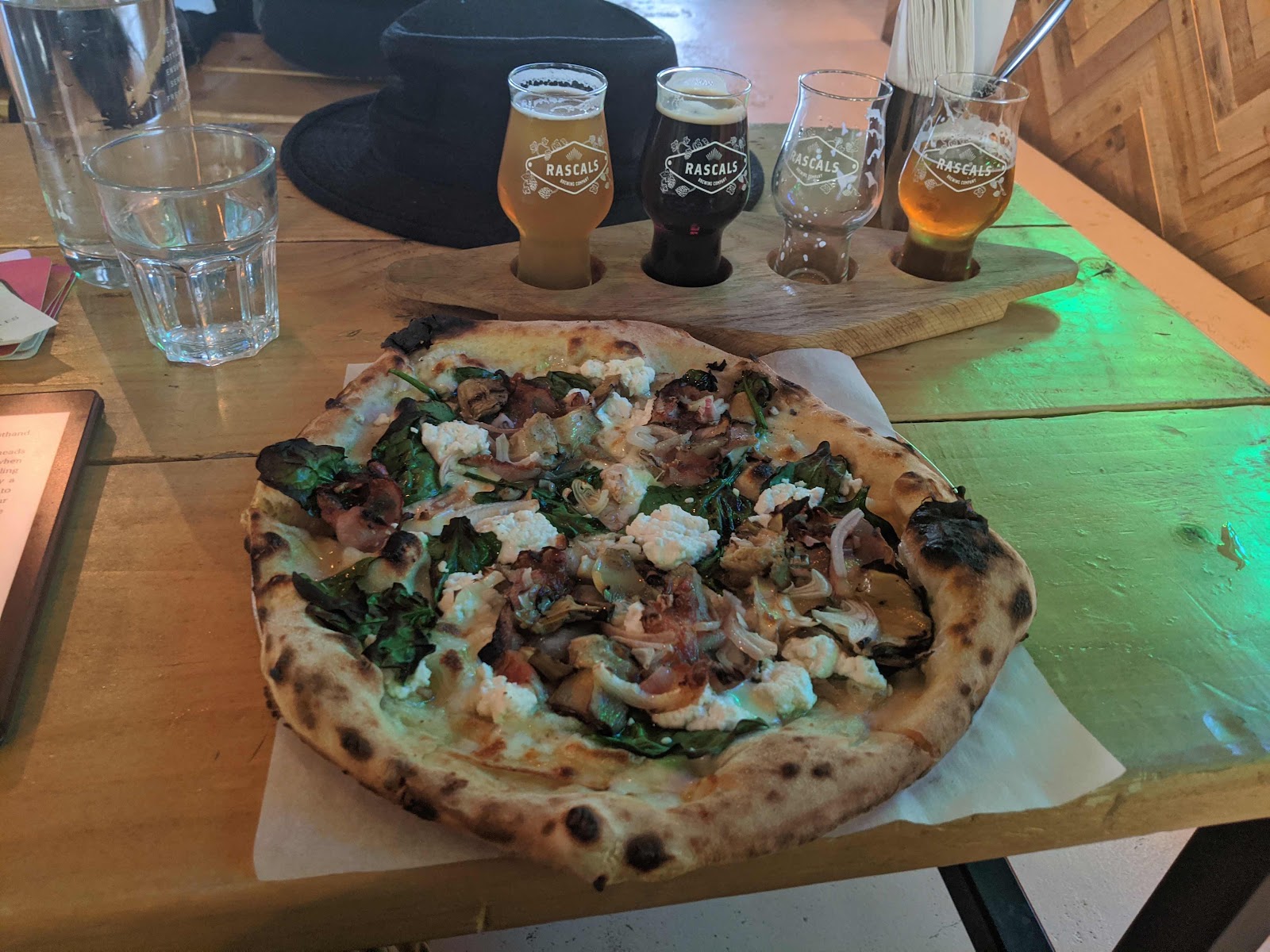 They also gave me a sampler of their Old Fashioned - Strong Blonde Ale brewed with orange peel and star anise and aged in Bourbon barrels. Sort of a homage to the Old Fashioned Cocktail. It was nice, but I forgot to take a picture.
Lots of tanks on view — the brewing vessels are a bit hidden behind. 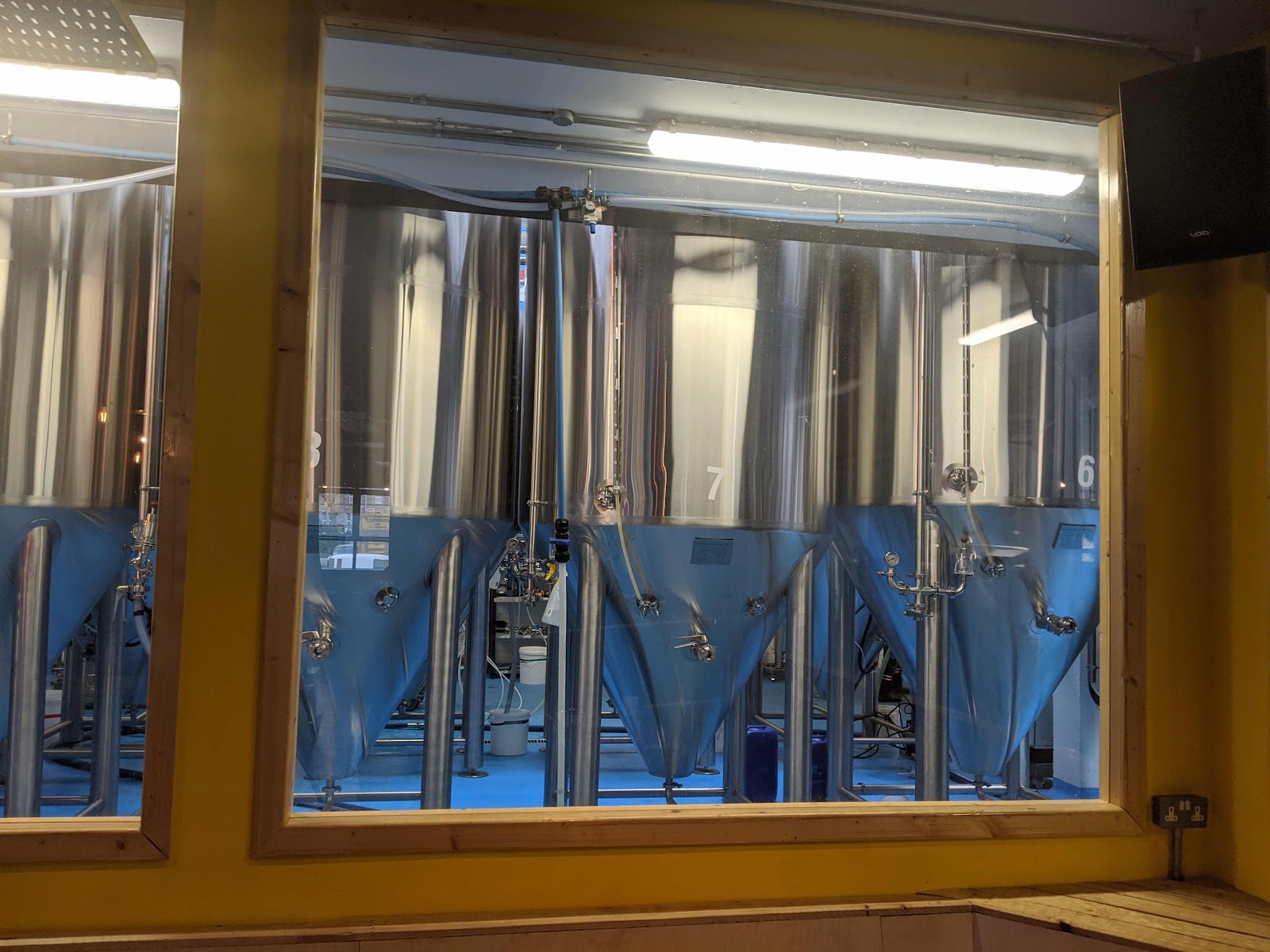 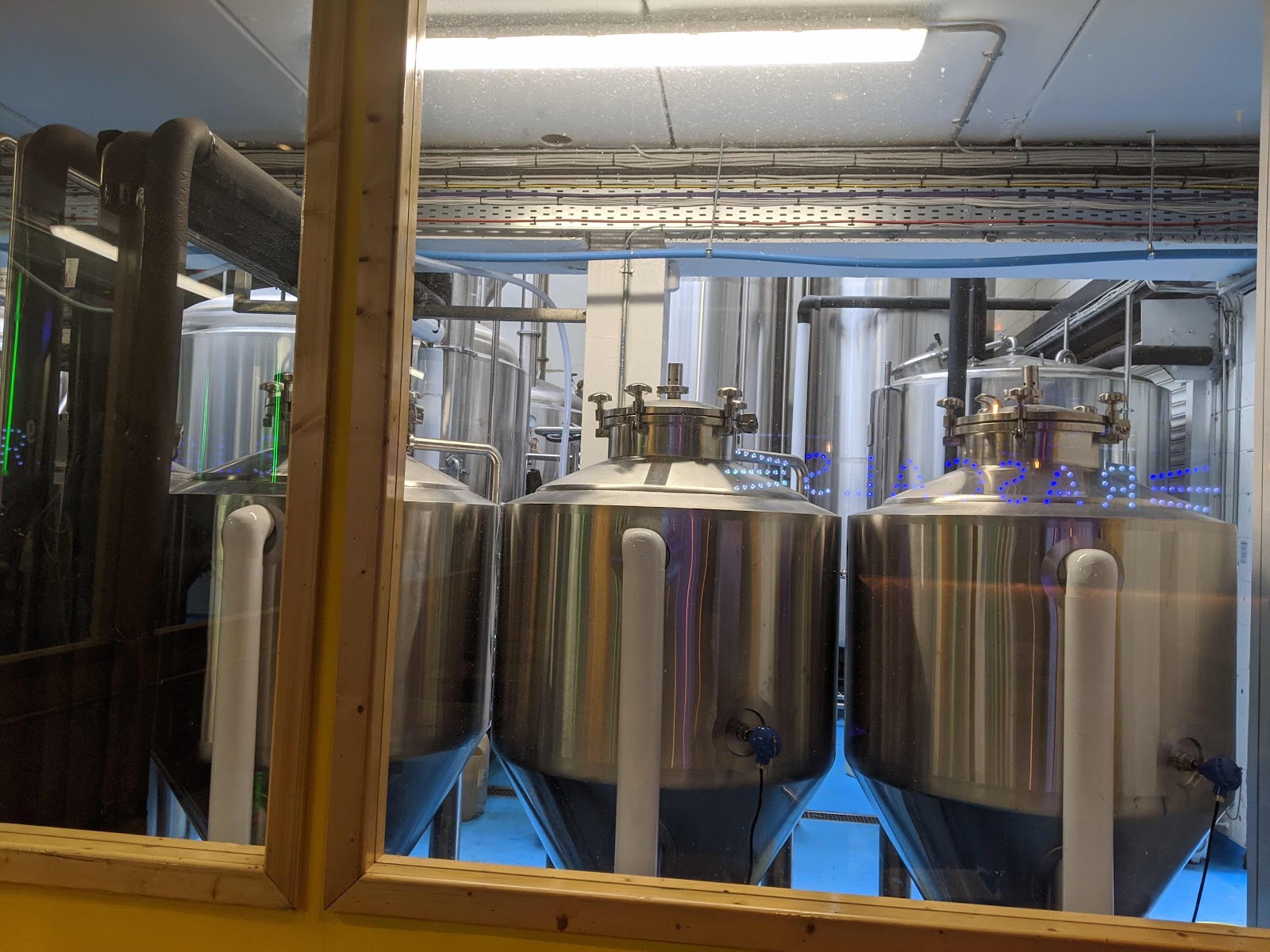 Coming back by hotel, I decided to pop in for a quick rest. Big mistake. A couple hours later and it was getting dark so I headed out to check out some new places.
First was Bonobo. They have been open for about a year. Inside is a sprawling multi room pub with lots of couches and easy chairs. Also very dark. The crowd was young — I think they (like Cassidy’s) keep the place dark so us Olds stay away. Night vision is one of the first things to go... 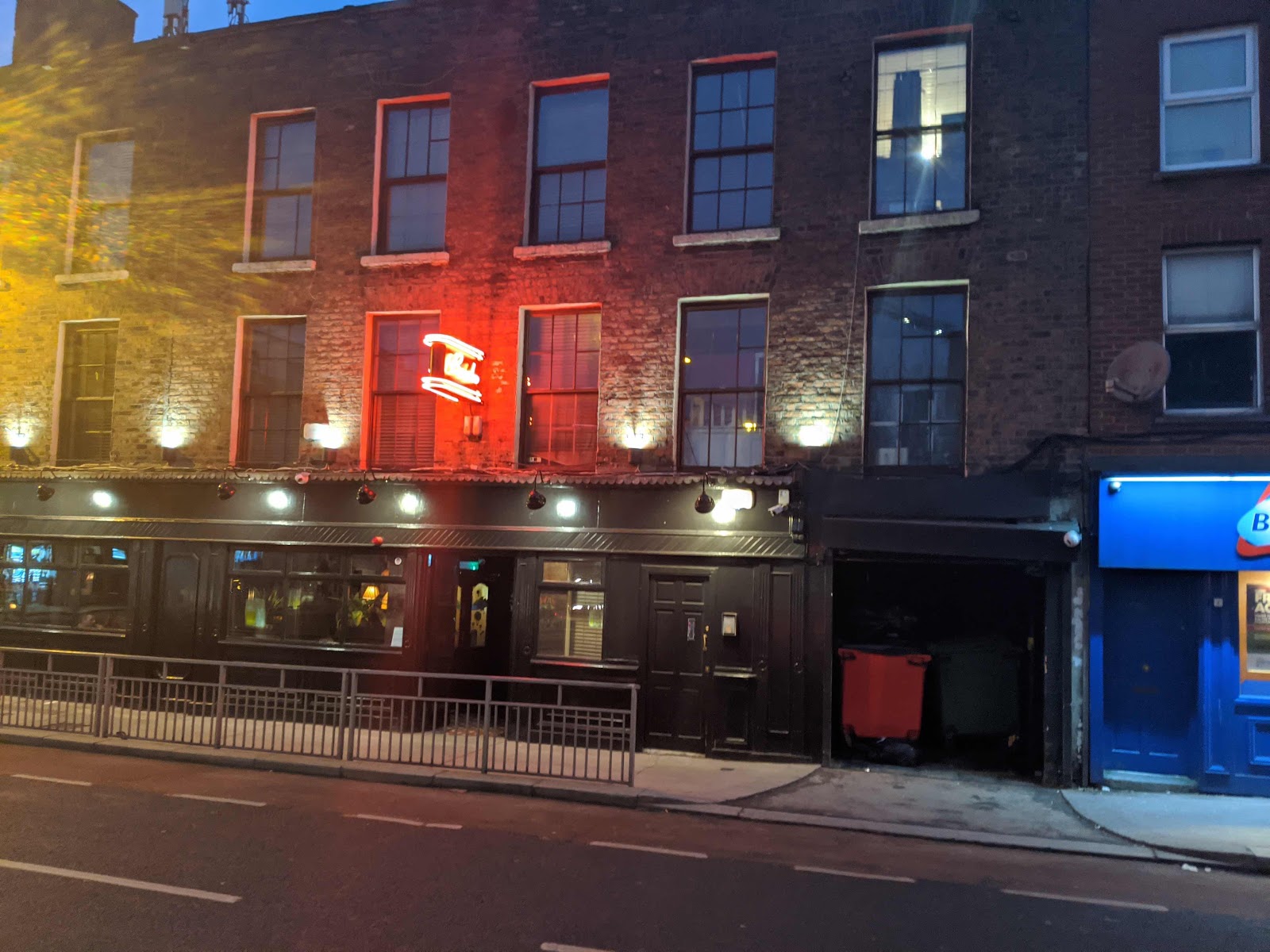 They had the Trouble Brewing Dark Arts Porter, so I had one. When I first came to Dublin 9 years ago this was one of my favorite beers and I’m glad to report it still is going strong. 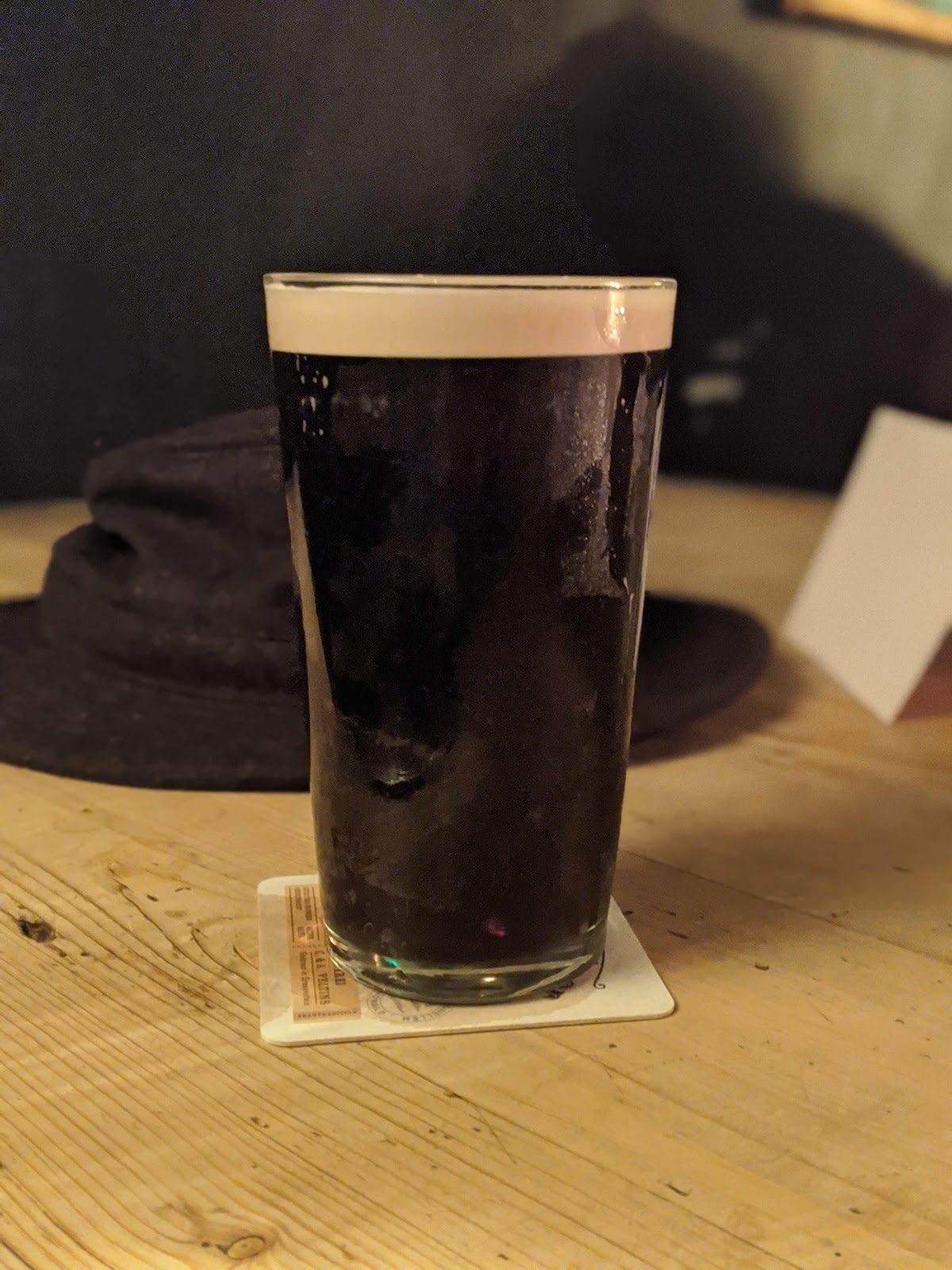 They also had Firestone Walker Mind Haze — the first time I’ve seen one of their beers over here. It is a good beer but I didn’t come all this way to drink beer brewed not that far from my home. Firestone Walker is now owned by Duvel Moortgat, which also owns La Chouffe and they had at least one Chouffe beer on tap so look for Firestone Walker wherever you buy your La Chouffe. 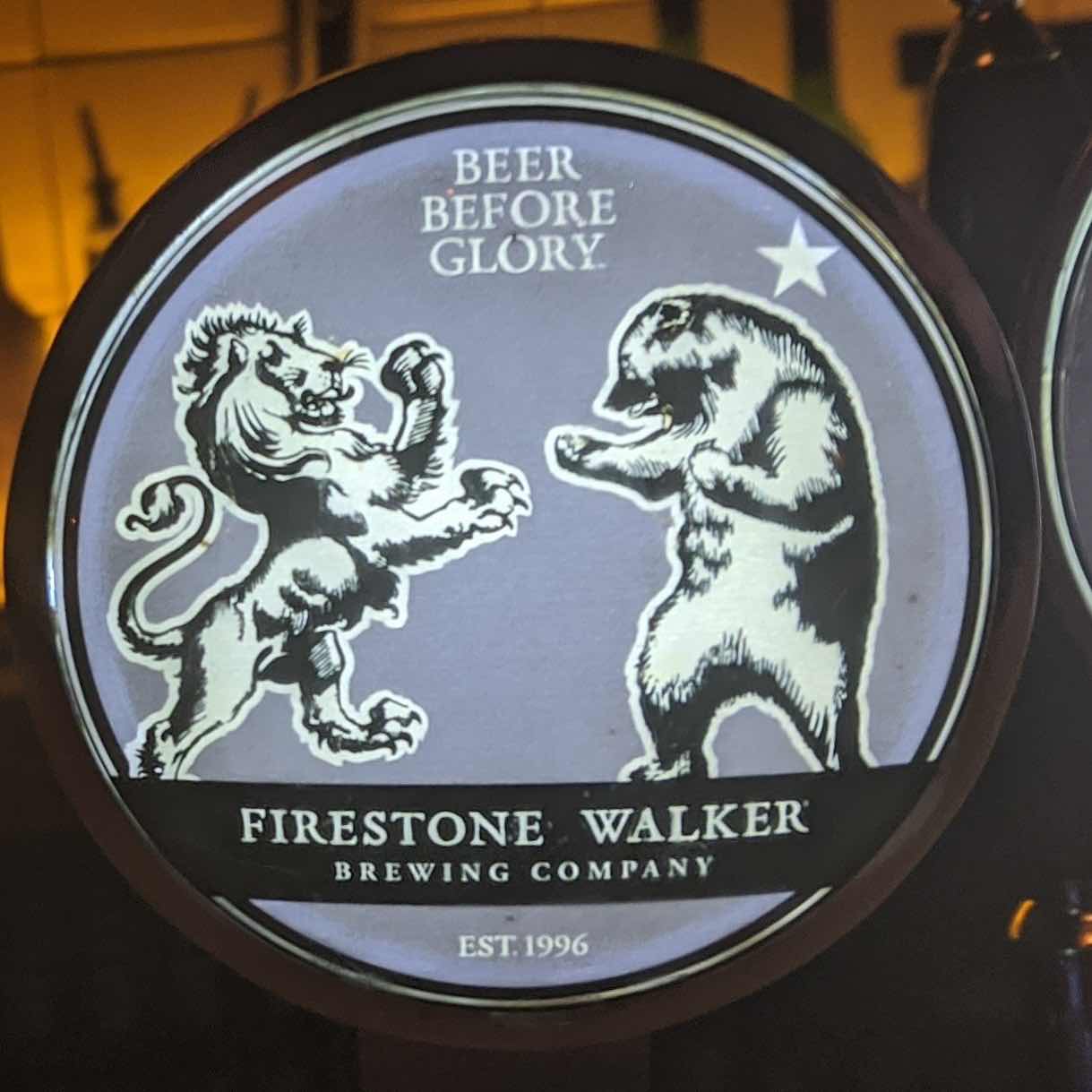 Practically next door is an even newer places, Taproom 47. They opened last November and are still somewhat in the getting started phase. Their kitchen is not yet ready but they hope to have it operating in a week or so, with wings a specialty and all the usual pub style food. 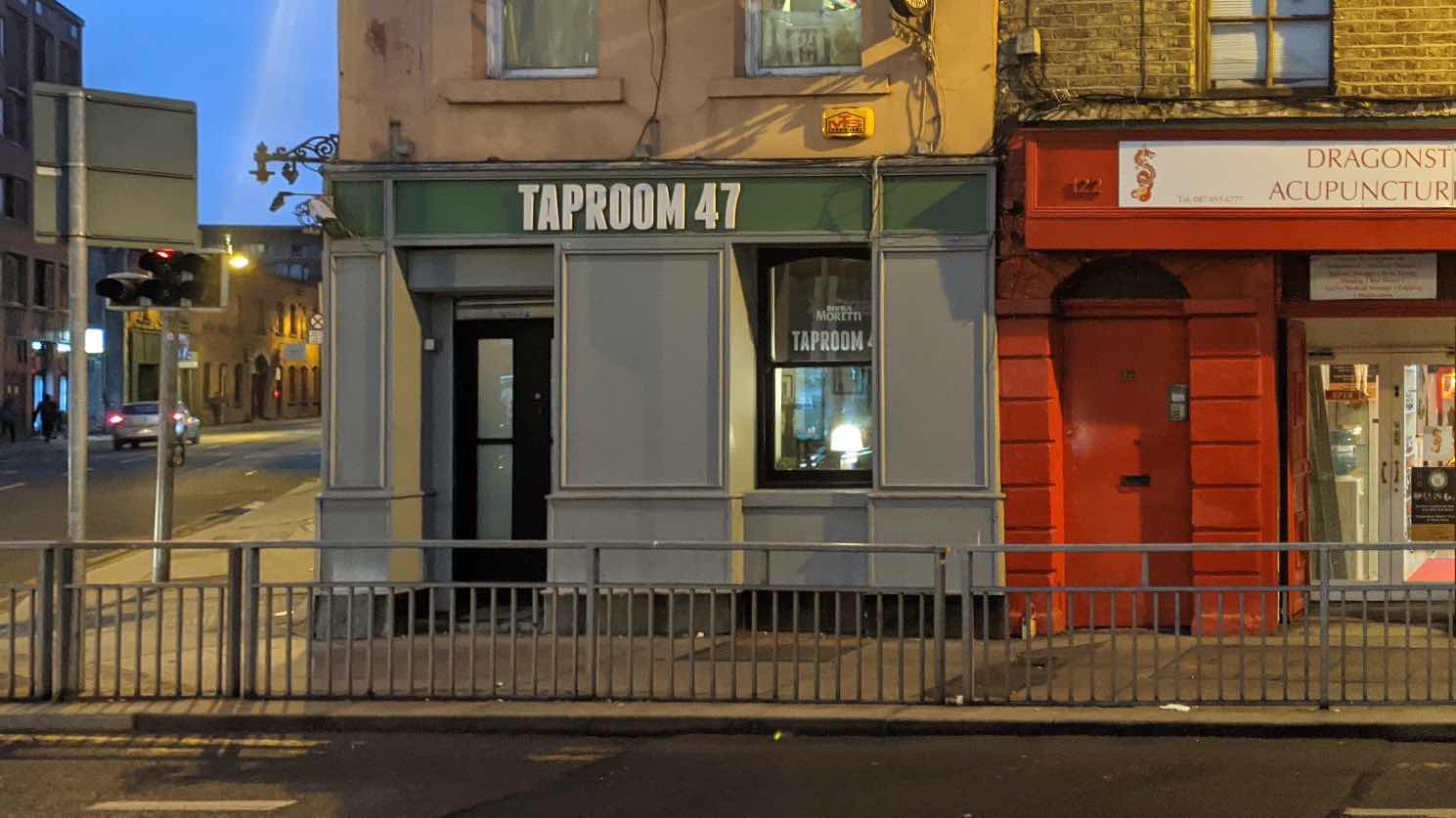 It’s another large multi roomed pub. There are two bars — one has the industrial beers and their fake craft brands and the other the more interesting beers. It was interesting two see two Stone beers. I asked the landlord if he knew where they were brewed and he said Berlin. So an American beer, brewed in Berlin, consumed in Ireland — a veritable United Nations in glass. Just needed NZ hops. 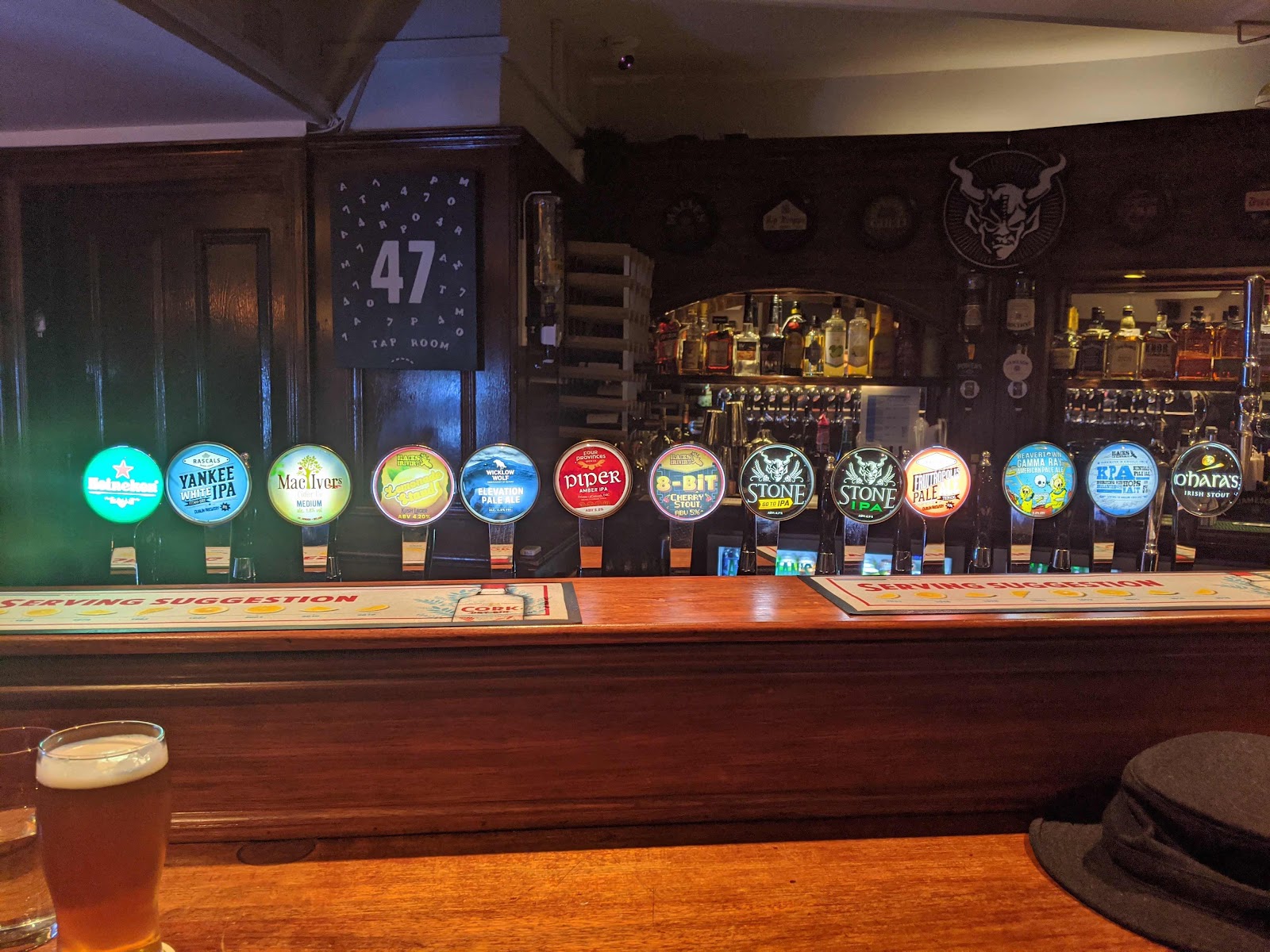 I started with the Kinsale Pale Ale from Blacks of Kinsale. 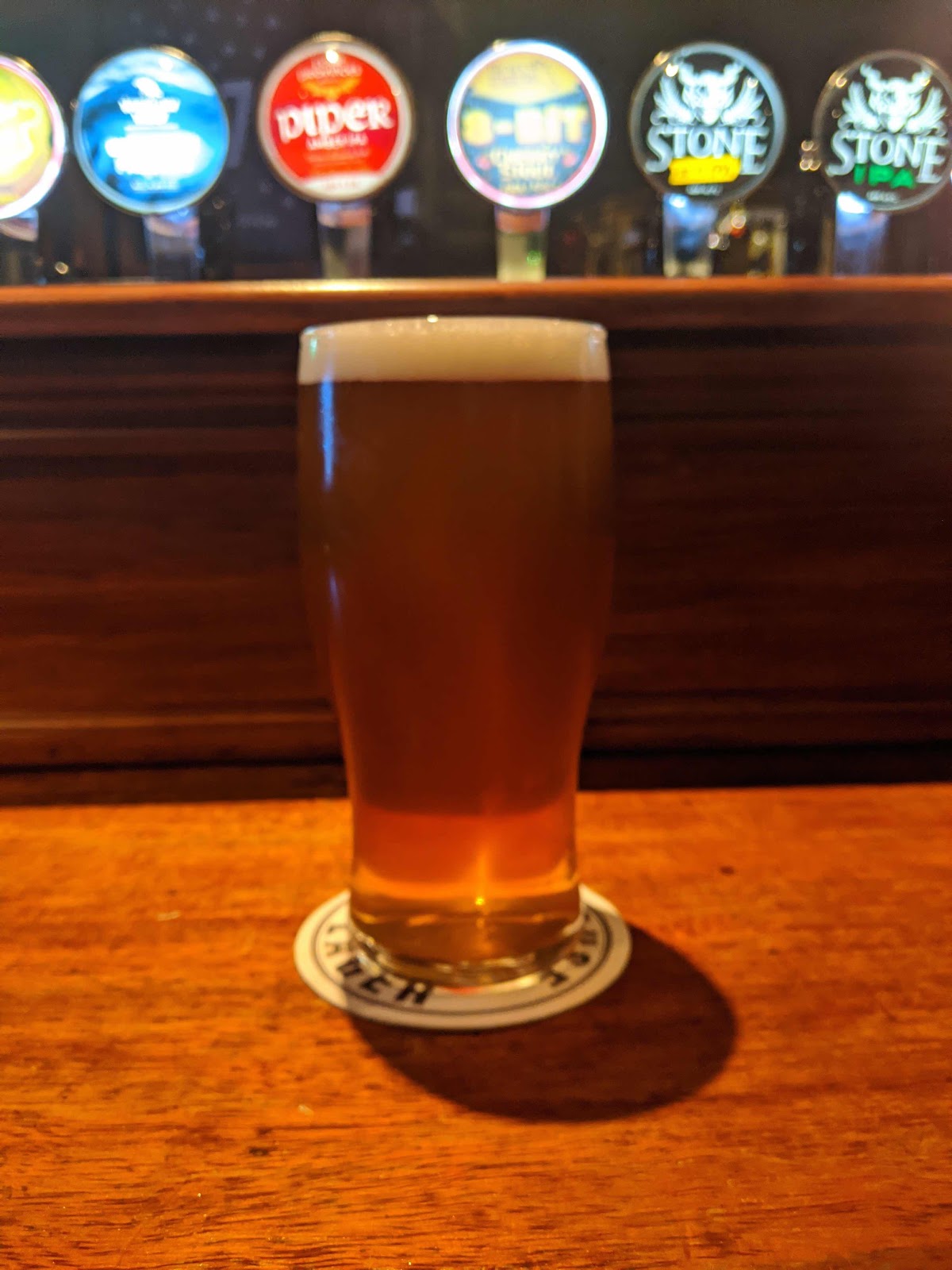 I was having a good time, talking with the owner so I ordered another beer, this one the Wicklow Wolf Elevation Pale Ale 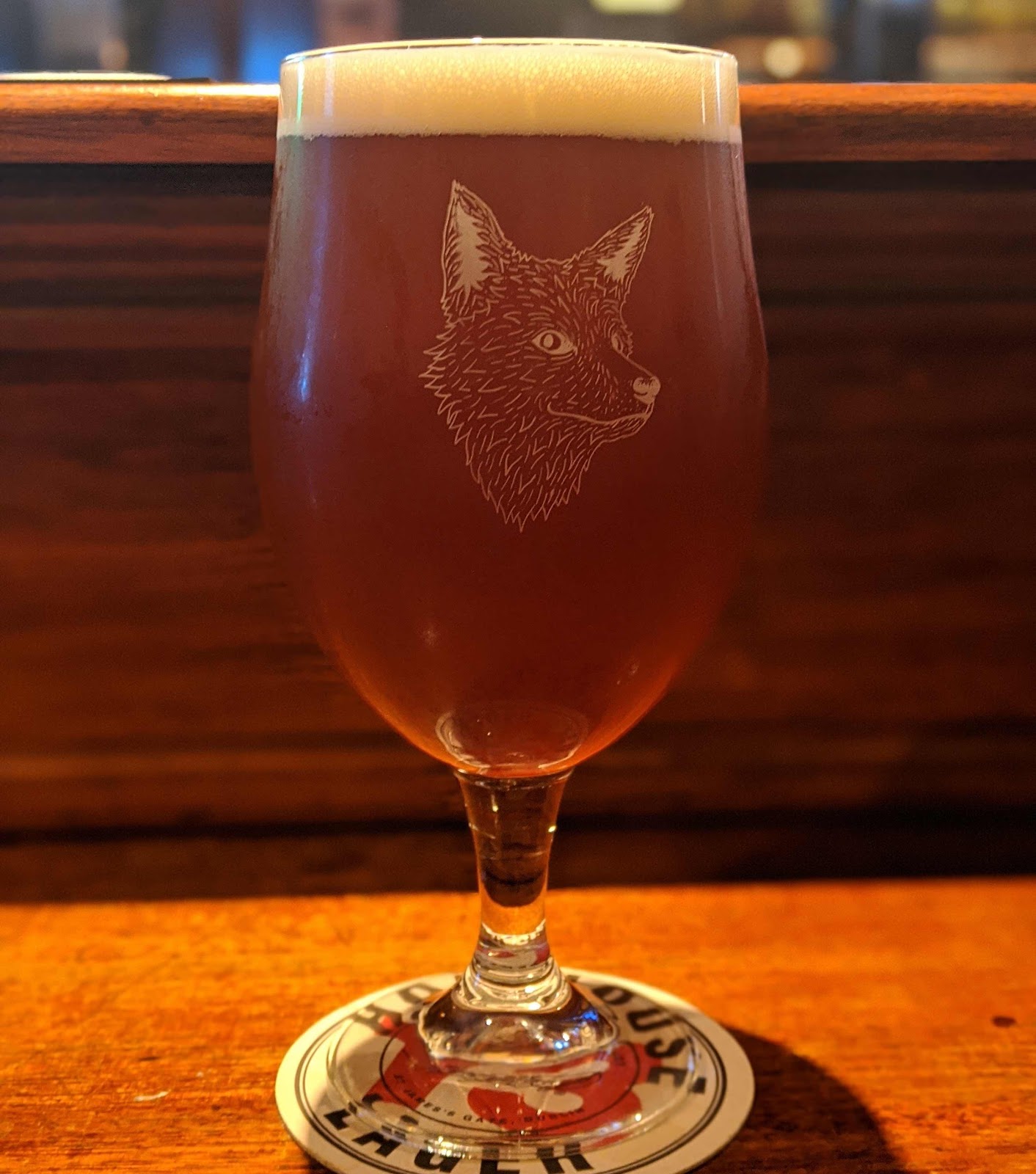 My first though was “Cool Glass” but I should have looked closer, that is really not much of a wolf. Turns out it was a fox as the glass was from Foxes Rocks, a brand brewed by Pearse Lyons in Dundalk. I’d had one of their beers years ago and it didn’t stick with me so it wasn’t exceptionally good or bad.
I was getting hungry so I walked up to L. Mulligan Grocer, one of my favorite places in Dublin. As I walked in the man behind the bar said “Welcome, I’ve been following your journey and Twitter and was wondering when you’d make it here.” The price of fame. 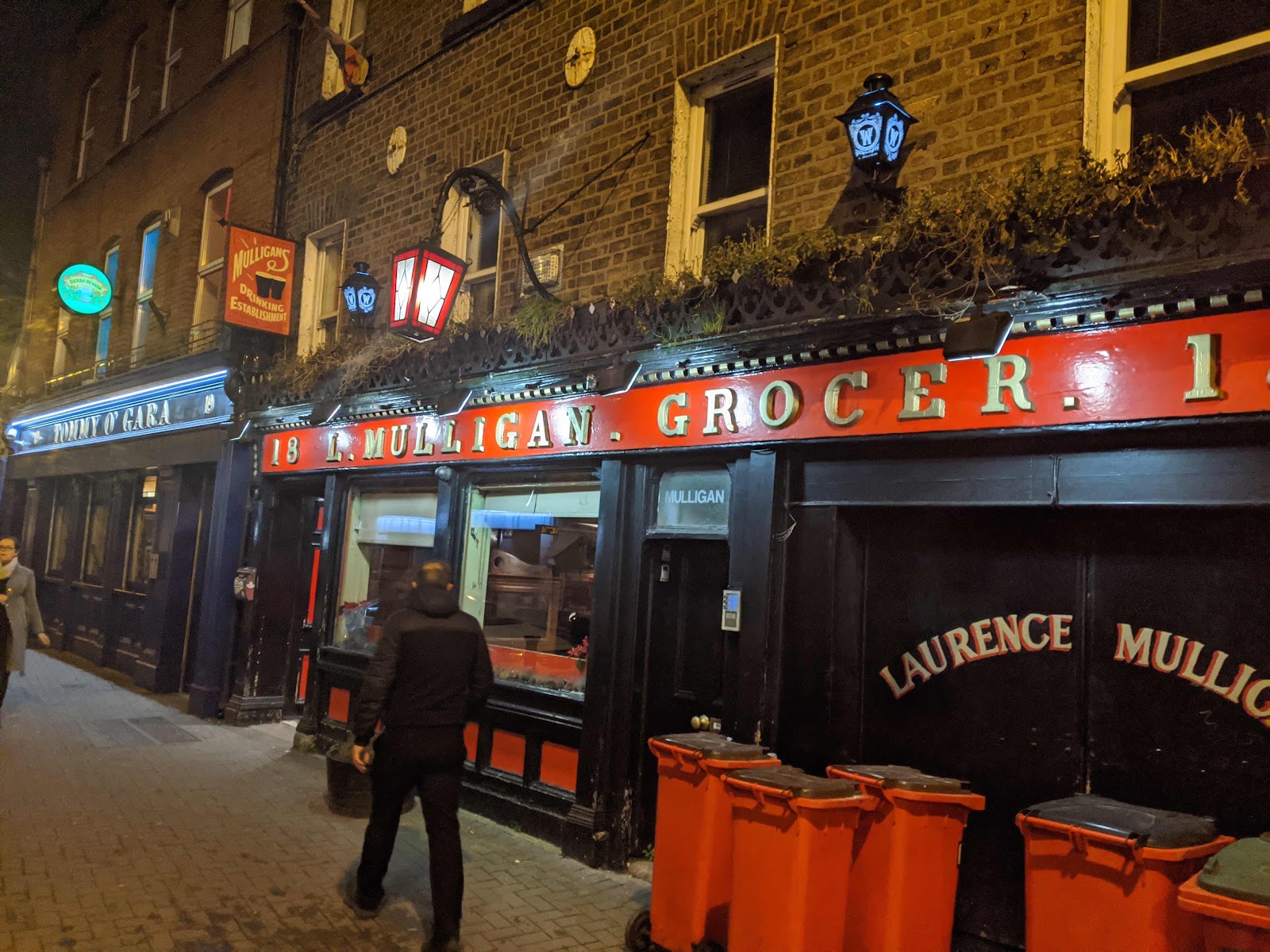 The front of the place is a normal pub and in the rear is restaurant seating. The food has always been very good and is usually a twist on some traditional fare (like Wasabi Mushy Peas). I was disappointed to learn that they no longer serve the full meals in the bar, but they did have a bar food menu.
I ordered a Stone Barrel Brewing Boom Session IPA (though at 5% not too session-y”) while I checked out the menu. 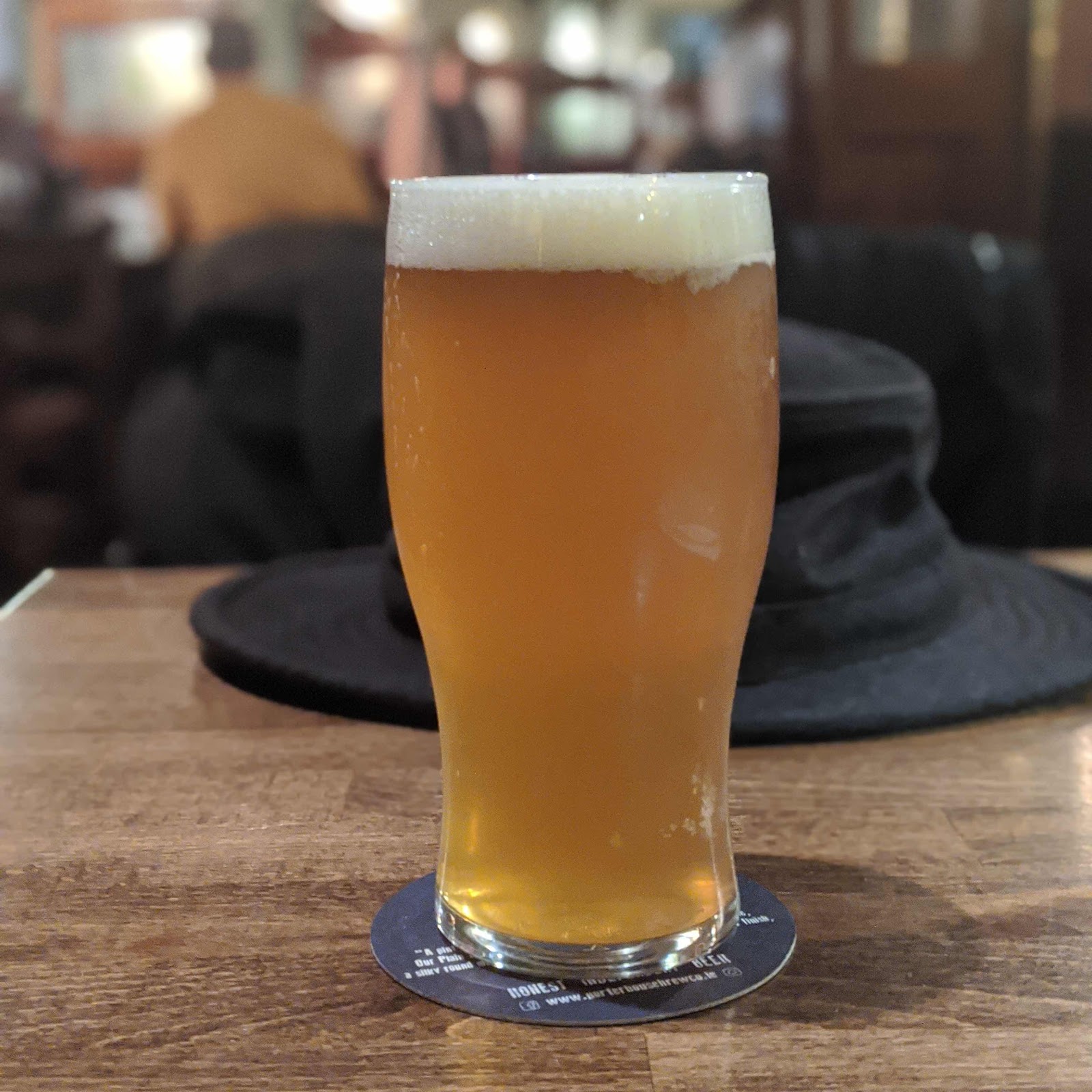 I ended up ordering the fried cauliflower and what was basically a mini “Fish & Chips” served in a beer mug. It hit the spot. 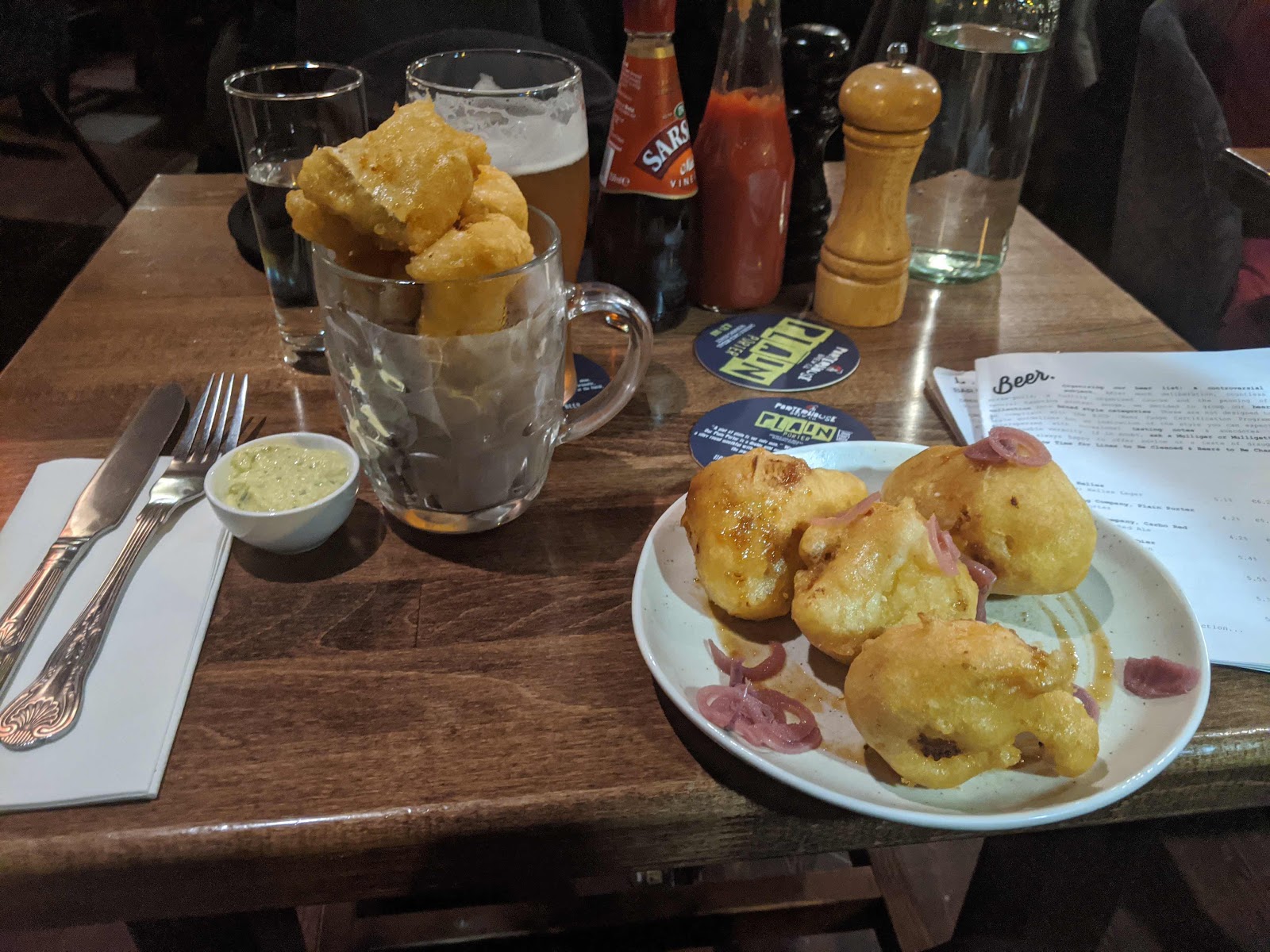 When checking out the beer taps, I saw this one, which made me laugh. I like honest brewers 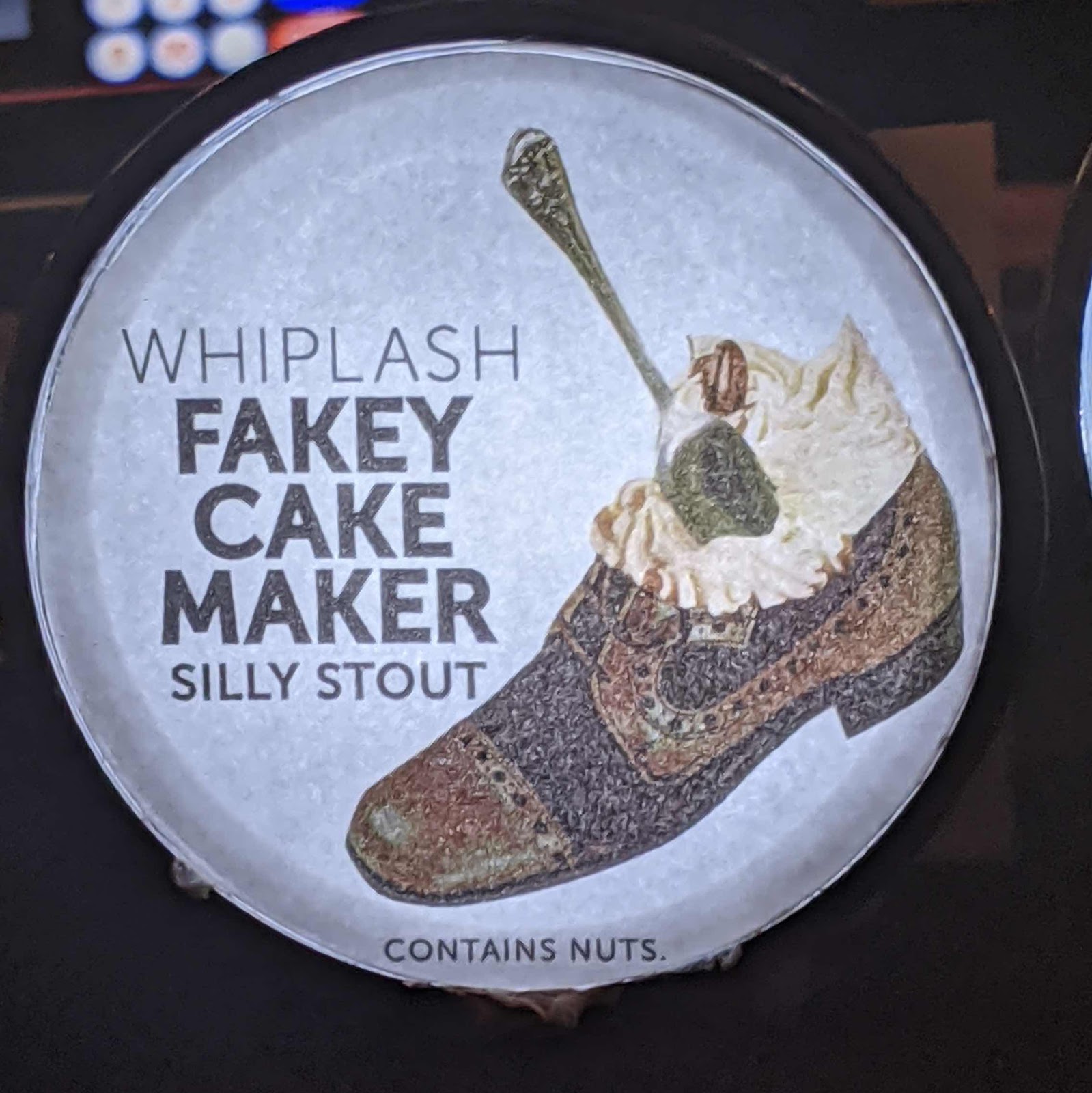 For desert I had an 8 Degrees Full Irish. This also was one of my favorite beers from previous trips and it was good. I haven’t seen to much 8 Degrees around town this trip — though I have since it in Amsterdam my last few trips there. 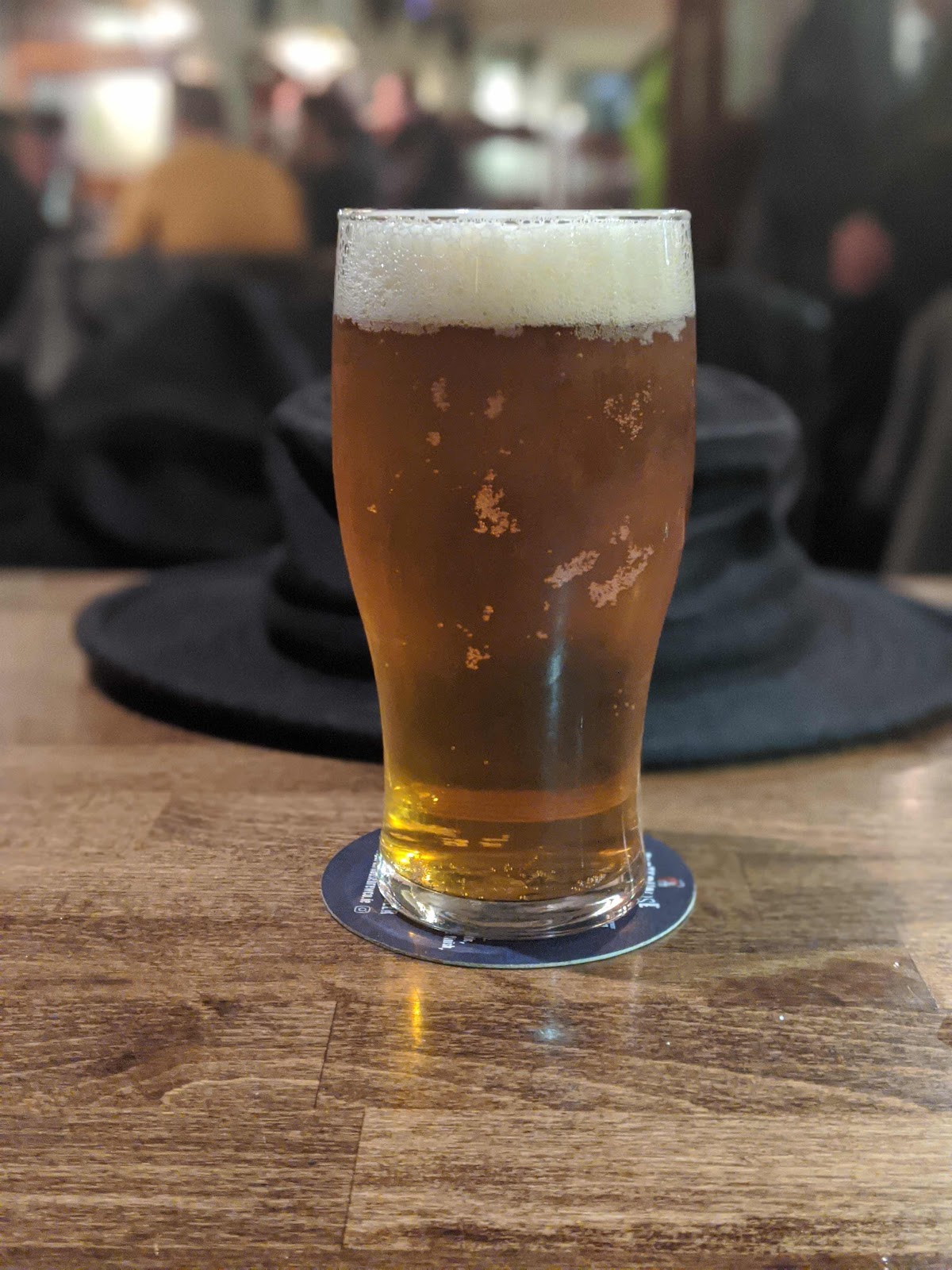 Time to head back to the hotel. I changed busses directly in from of Cassidy’s (Westmoreland St) where I had been the night before. I was slightly temped to pop in for a quick one but only slightly and I headed off home.
Posted by The Mad Brewer at 2:57 AM

Hogfather vs. mini-fish-n-chips
Is it common to find that 4.4% D.A porter?
https://flagshipfebruary.com/2019/02/23/susan-boyle-on-trouble-brewing-dark-arts-porter/