So I set out to check out some new places and one that has changed ownership.
First stop was the Bald Eagle. They had flags hanging out front for Founders and Sierra Nevada as well as a few Irish craft breweries. A good sign. Unfortunately, they were not open yet. I had bad information as to their opening times. It is amazing how many times a place will have incorrect times on their web page or Facebook page. Oh well, maybe another time. 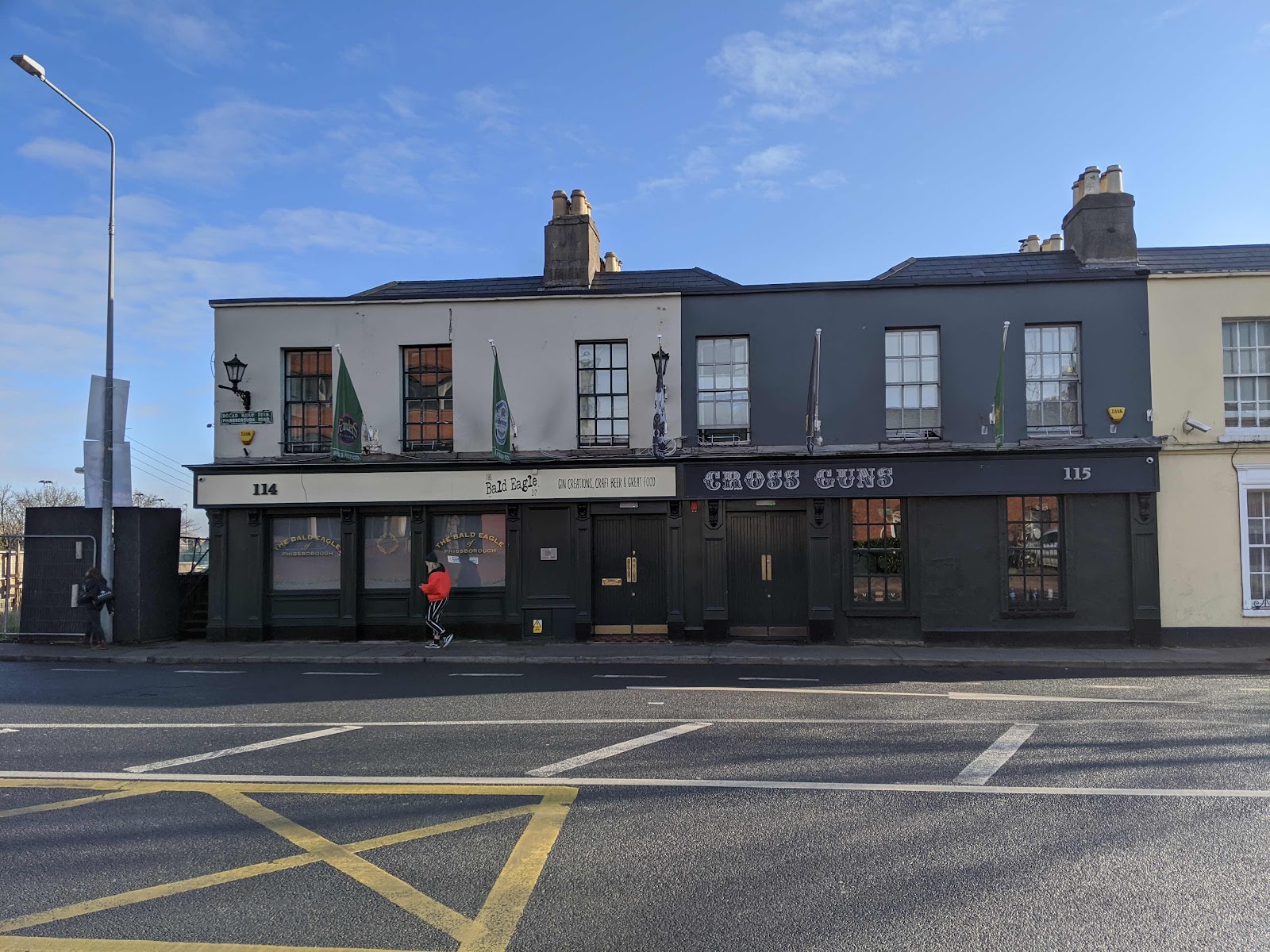 My next stop was just across the Royal Canal. In the distance off to the right, you can just see part of Montjoy Prison, which along with the canal features in the song “The Auld Triangle.”  Your daily bit of culture. 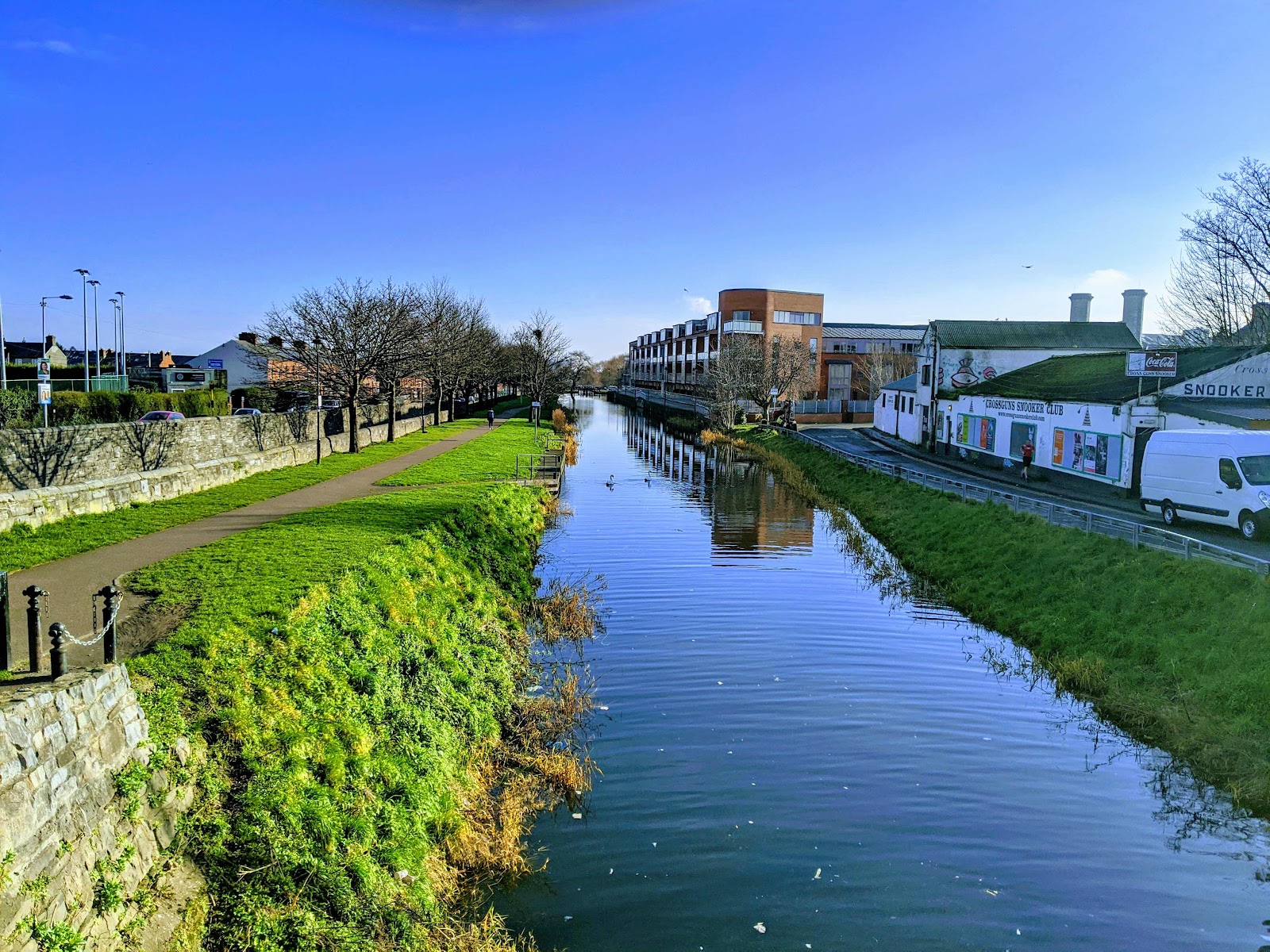 On the other side of the canal is The Bernard Shaw. At one point in time this was the Porterhouse North, which was some sort of franchise deal rather than a company owned pub. It has changed names a couple of times in the meantime. The Bernard Shaw was in a different location and was closing when this site became available, so they moved. 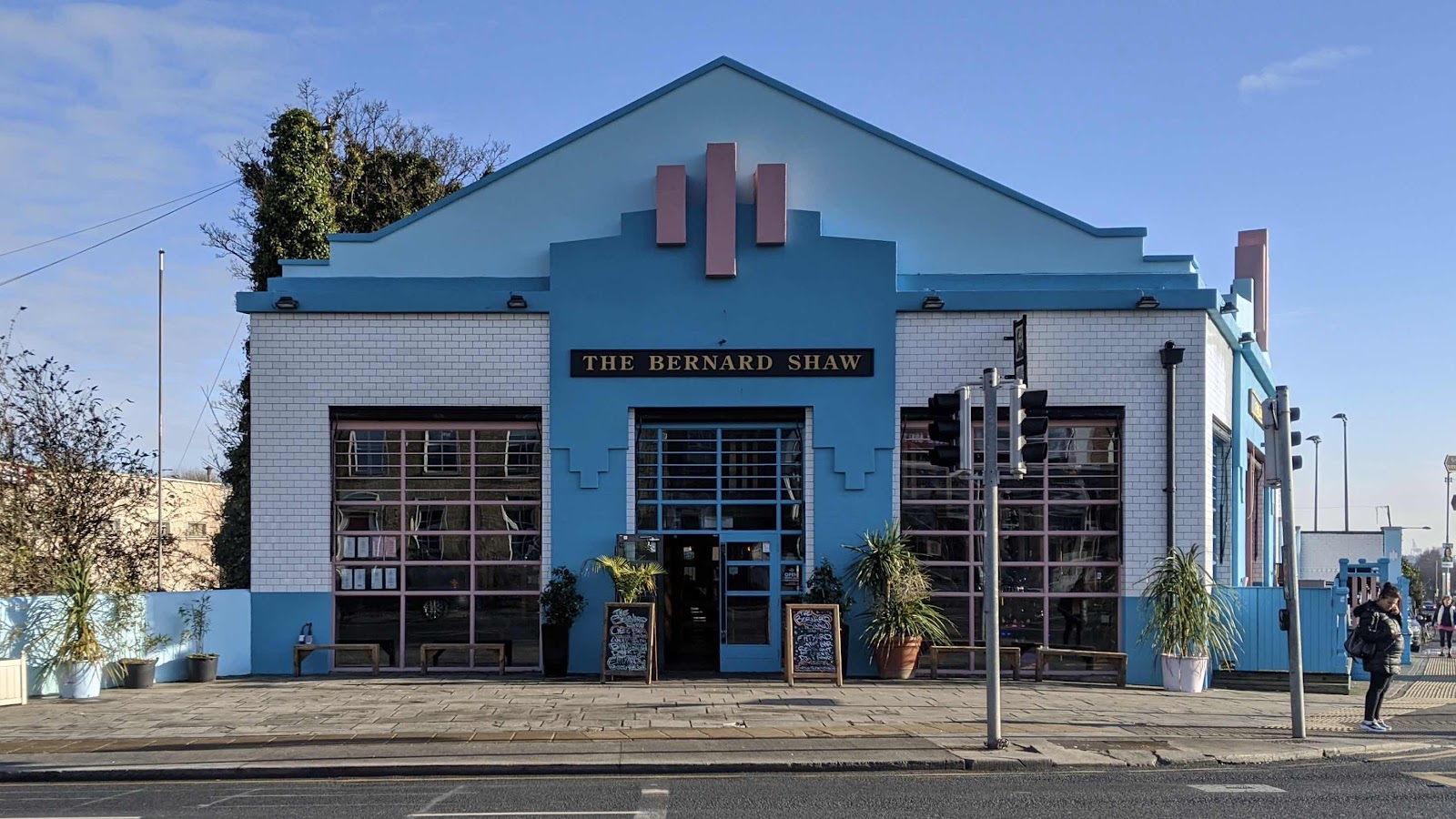 They had four Porterhouse beers on tap, the rest were mostly industrial beers or the “craft” brands of industrial beers. The pub is part of a group called “Bodytonic” which has their own label beers, which at one time were (I believe) brewed by Rascals and were decent. Don’t know the current status. Anyway, there were a few of those on tap as well. 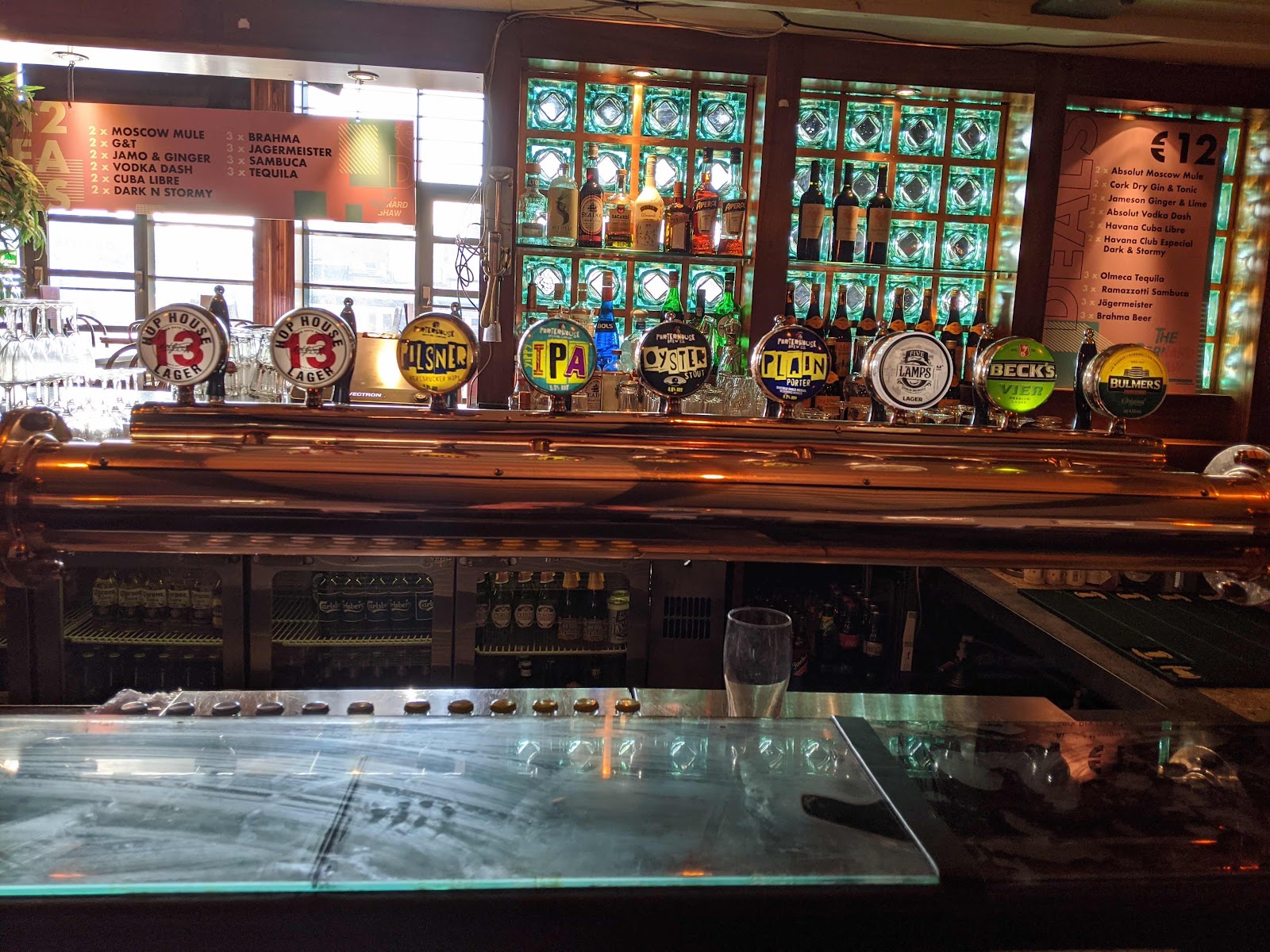 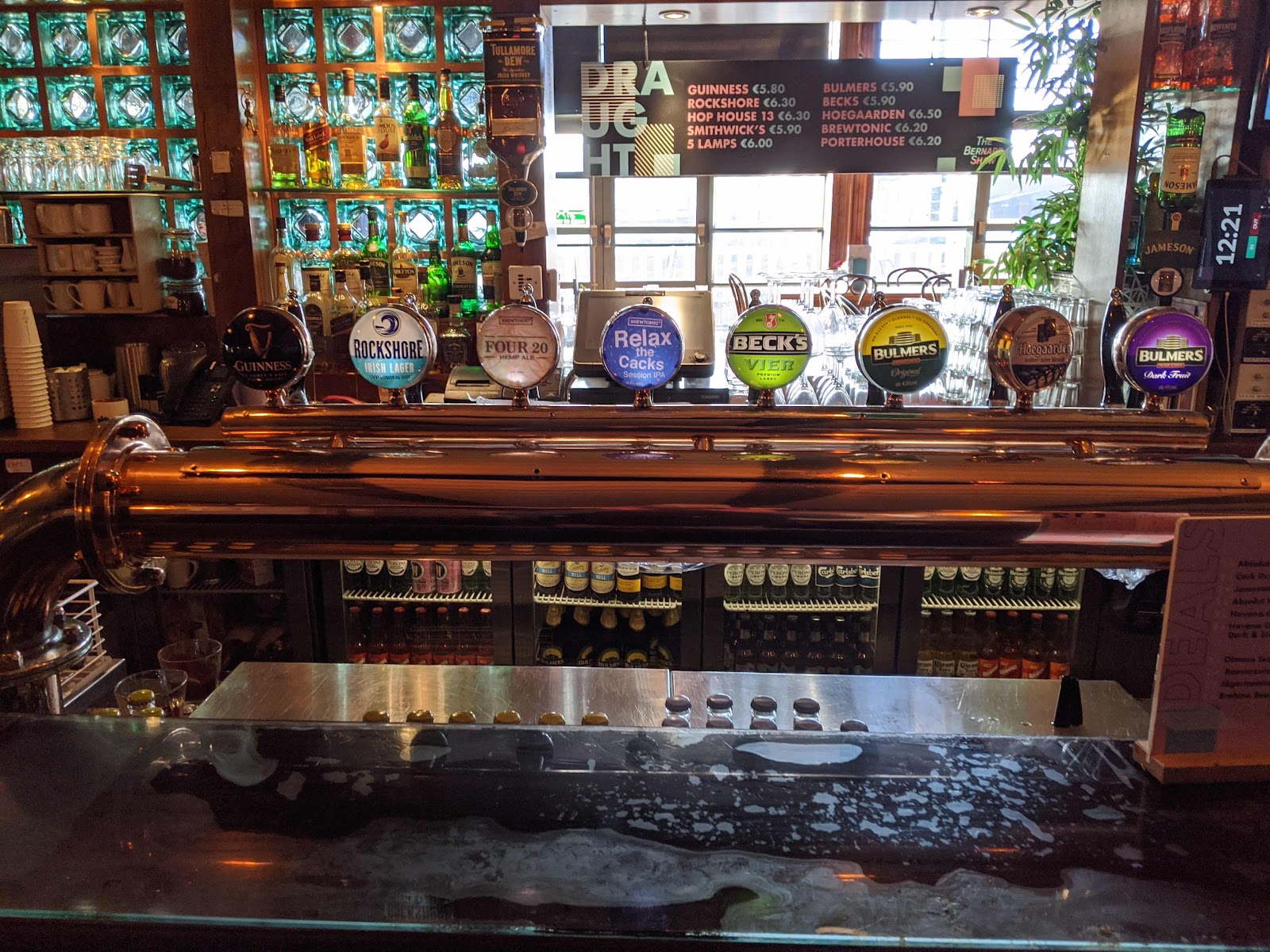 I ordered the Porterhouse Plain Porter. I heard from an old time patron of another bar that this is what Guinness tasted like back in the old days. I don’t know if that is true but it is a good beer and much more interesting than Guinness. 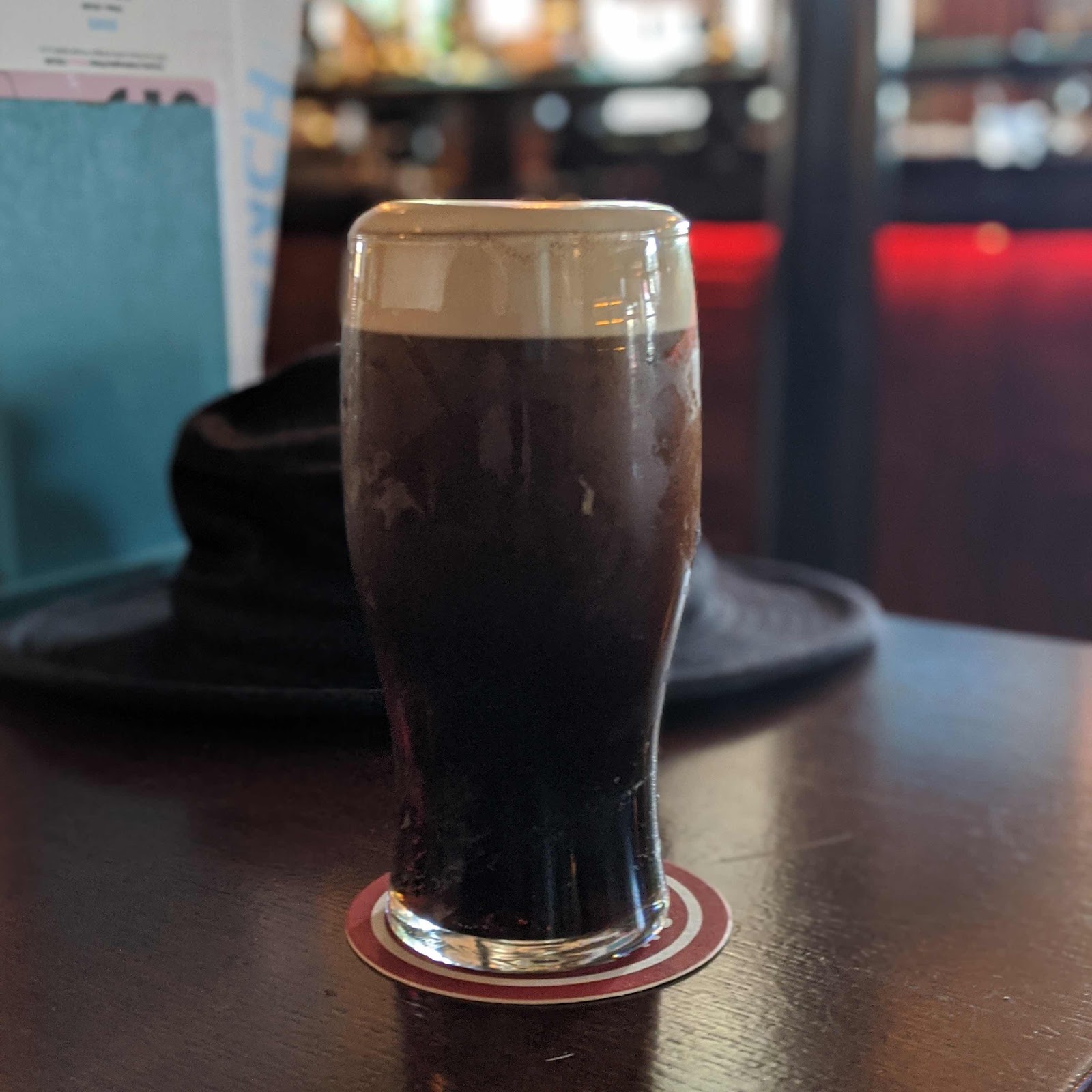 It was lunch time, so I ordered a “Chicken Taco Salad” and a bowl of soup. The soup was good and the salad would have been OK but it was drenched in some weird (slightly spicy) sauce. 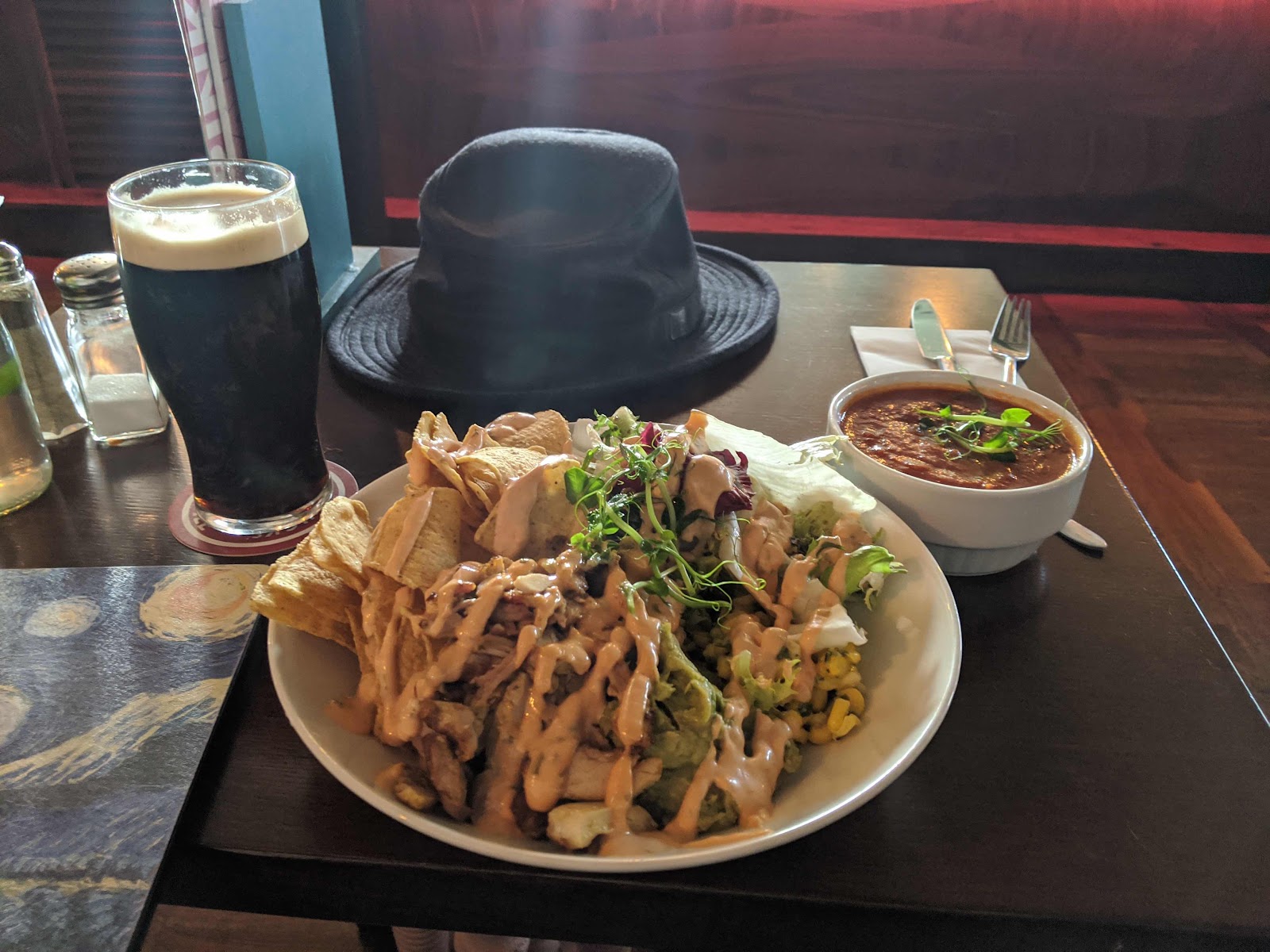 If I was going to drink Porterhouse beers, I though I’d rather do it at Porterhouse pub so I passed on another beer.
Walking around, doing some errands I came across an Asian fish market. I always like pictures of dead fish on ice. Makes me hungry.

Somebody with too much time on their hands, but it got a laugh out of me. 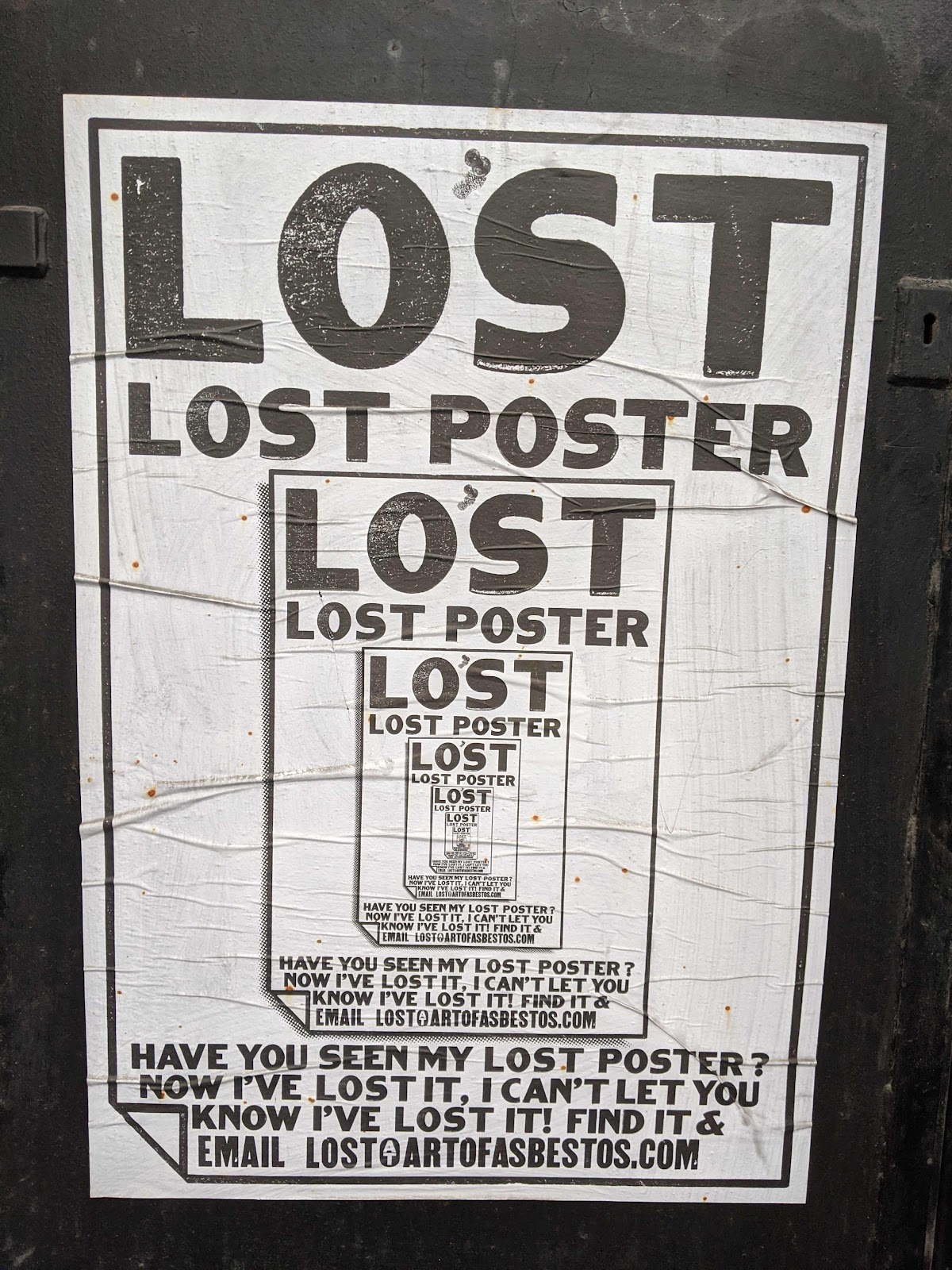 One of the places I wanted to check out was called the Ruin Bar. When I got there I saw it was a sister pub to the Camden Exchange. Not good news but not bad news either. 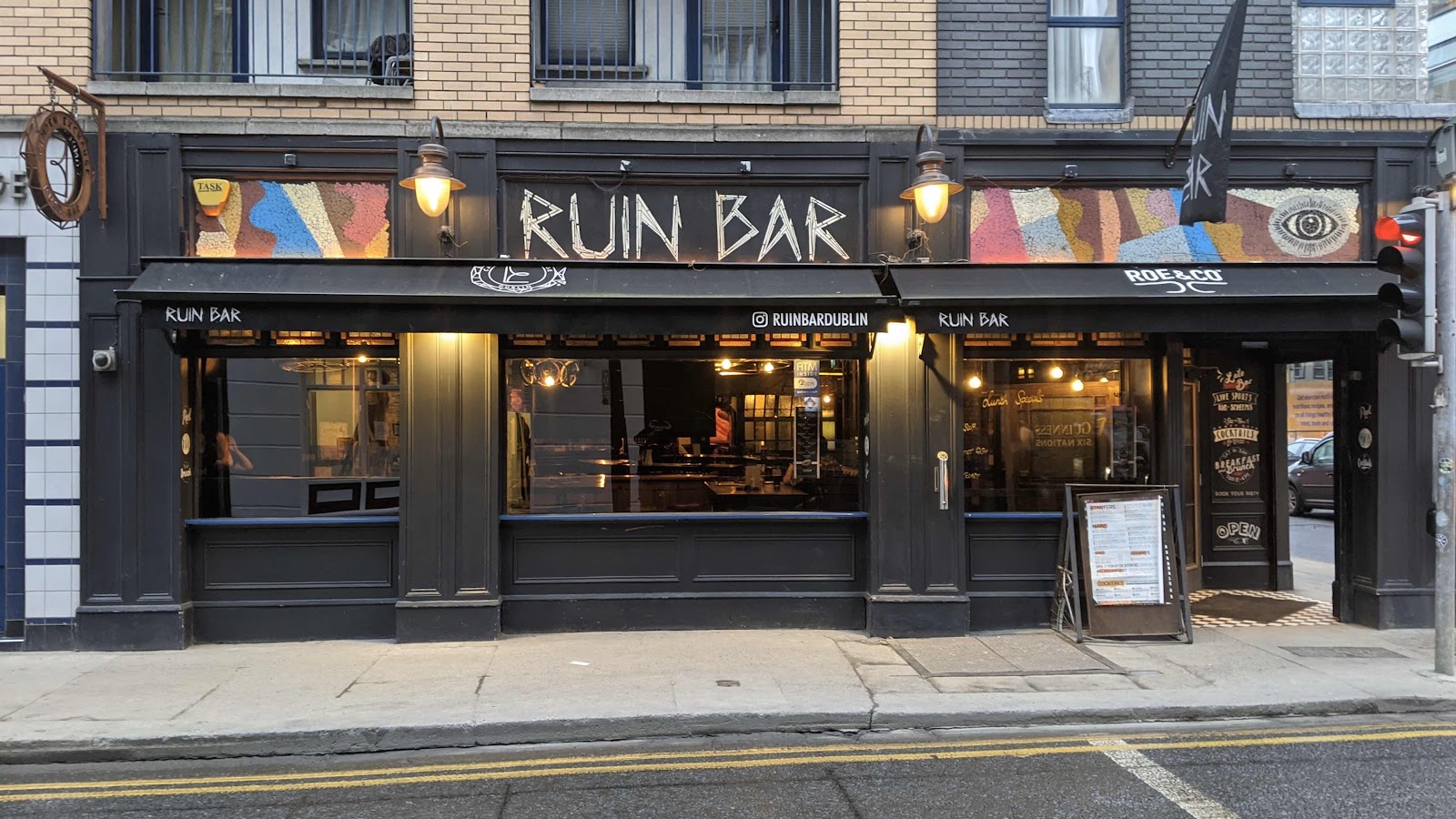 Like the Camden Exchange they have 30-40 taps, mostly industrial beers but they do have 8-10 interesting Irish beers. I went with the Kinnegar Big Bunny IPA which according to their website is an “East Coast IPA.” Now Ireland does have an East Coast but something tells me that is not what they had in mind. As with all of their beers that I’ve had from them it was tasty. 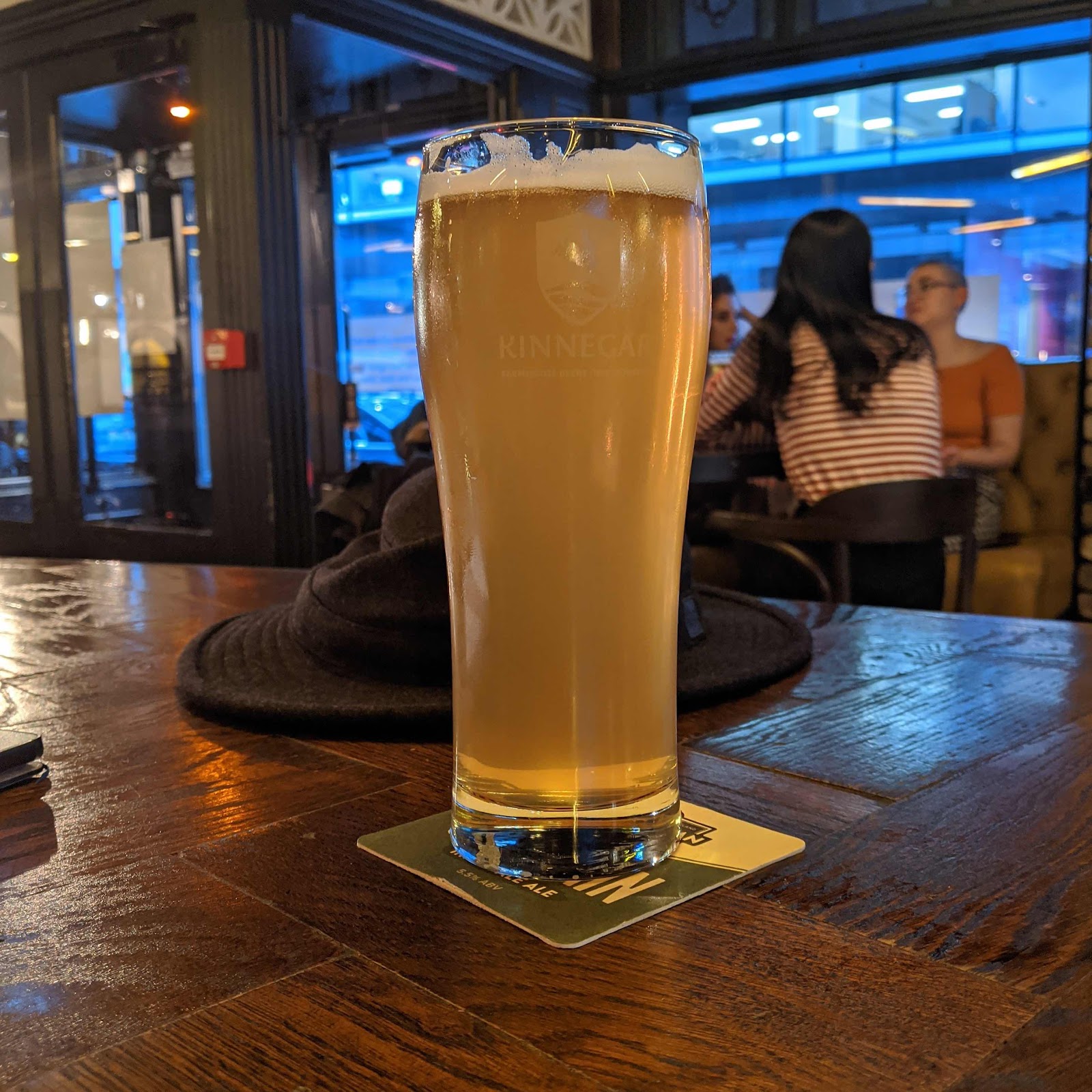 As I left to check out the next place I saw this sign and just thought of Audrey. 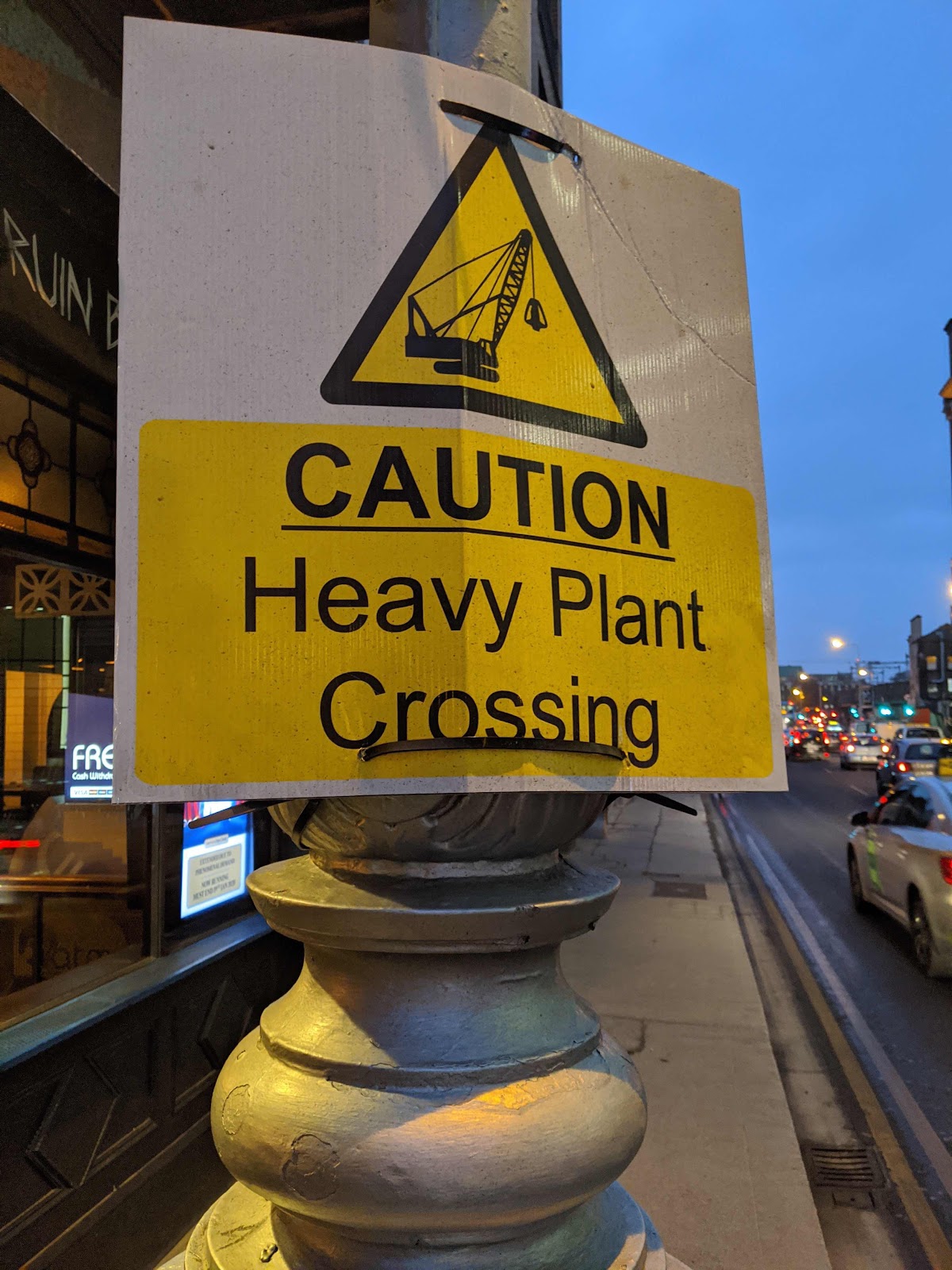 My next stop was Mulligan’s of Poolbeg St. This is a classic old pub, said by many to have the best Guinness in town (if you are into that sort of thing).  I had heard that they had upped their beer list and now had some craft beer, so I went to check it out. 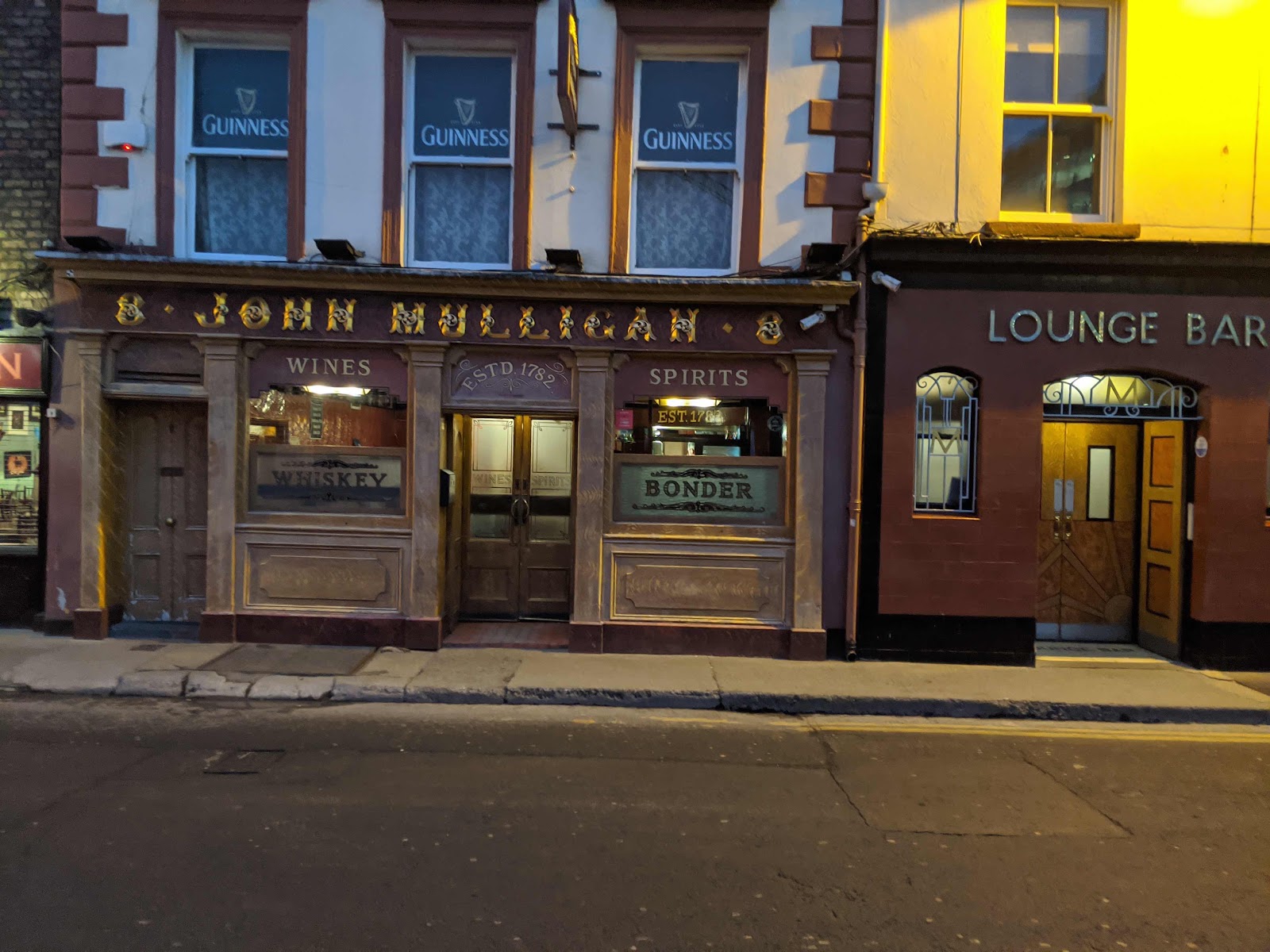 There are actually two bars, each with its own set of taps. On my side they had O’Hara’s Pale Ale (and Sierra Nevada Draught Ale) so I ordered the O’Hara’s. It turns out the other side had a bunch more beers, including another 3 or 4 O’Hara’s. 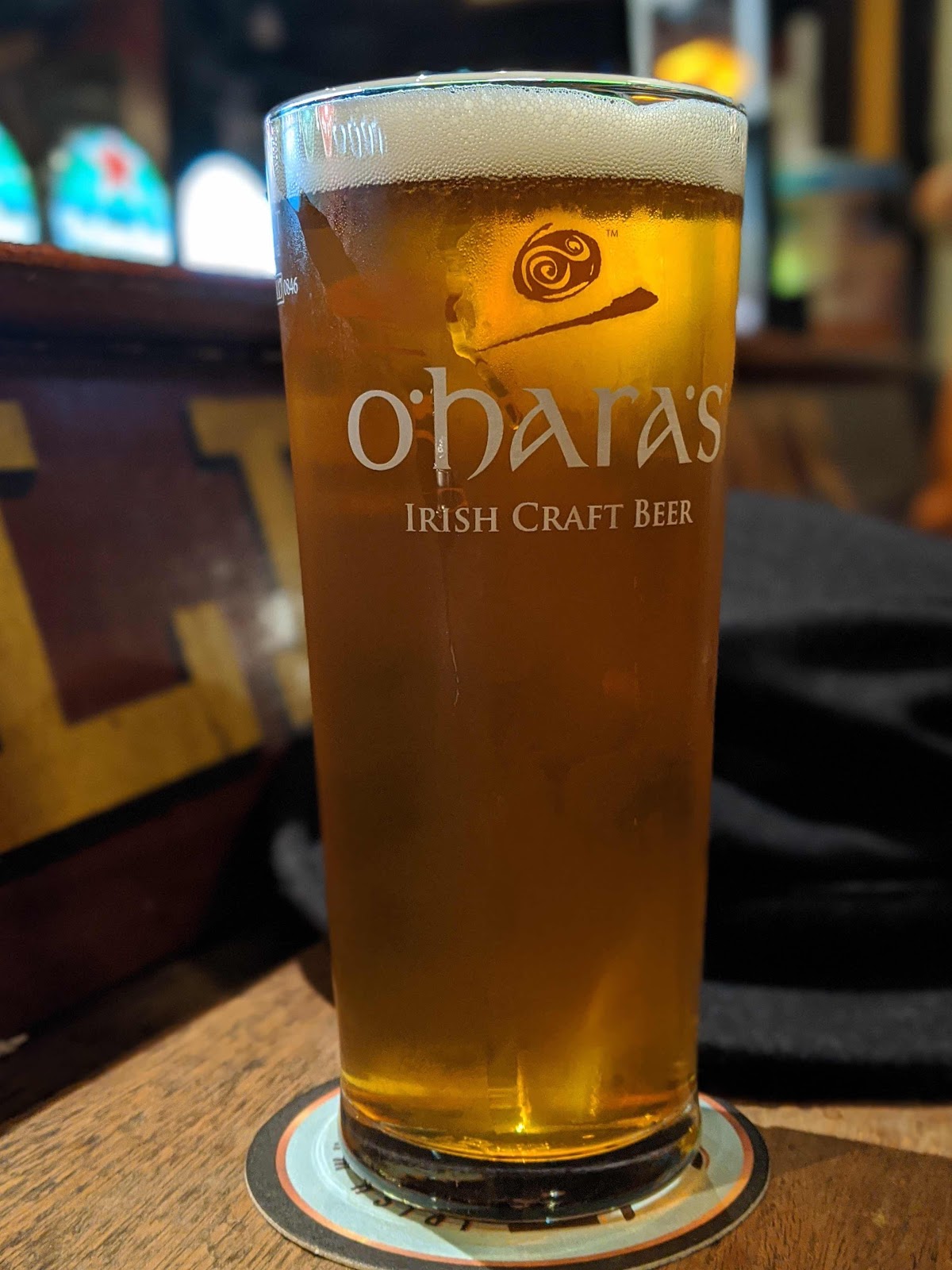 The O’Hara’s was good, as I’d expect. Watching the bartender, Guinness was far the most ordered beer, followed by Heineken. There was the occasional order of Carlsberg and even a couple for Beamish.  They had four taps of Guinness and two of Heineken (on this side alone) so that probably is reflective. The Guinness taps were mostly used one at a time, occasionally two at once. So I asked why four? He replied that was so when a keg kicked they didn’t have to waste time changing it but would switch to the next tap. The keg could them be replaced when there was a quiet(er) moment. I had never thought of that.
The had coasters on the bar for Roe & Co Irish Whiskey, so I thought I’d try one. It seemed like a good idea at the time but my morning headache probably says otherwise. I did enjoy it though, 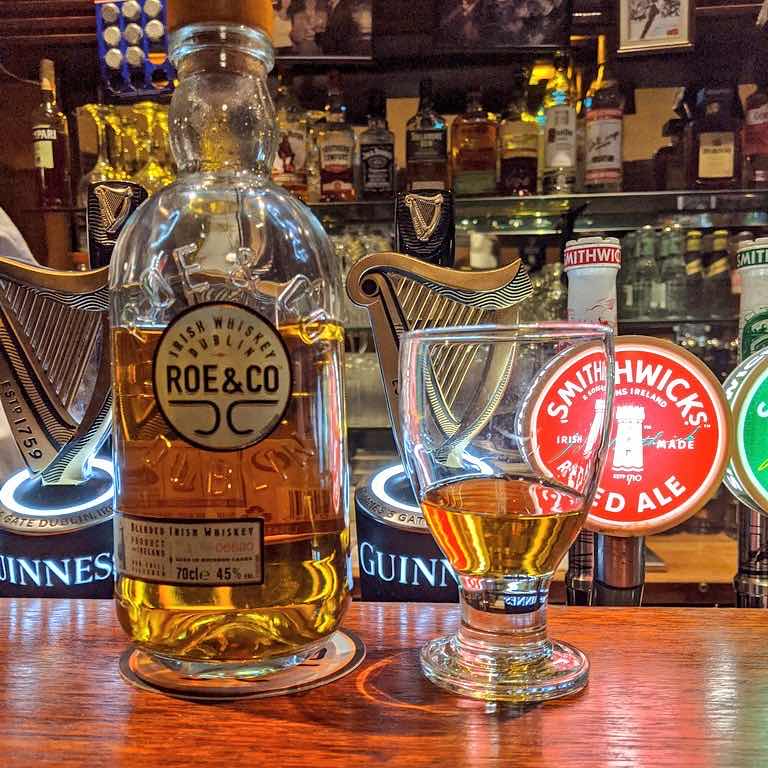 With all the Guinness being poured, I figured I probably should have one. When in Rome and all that... 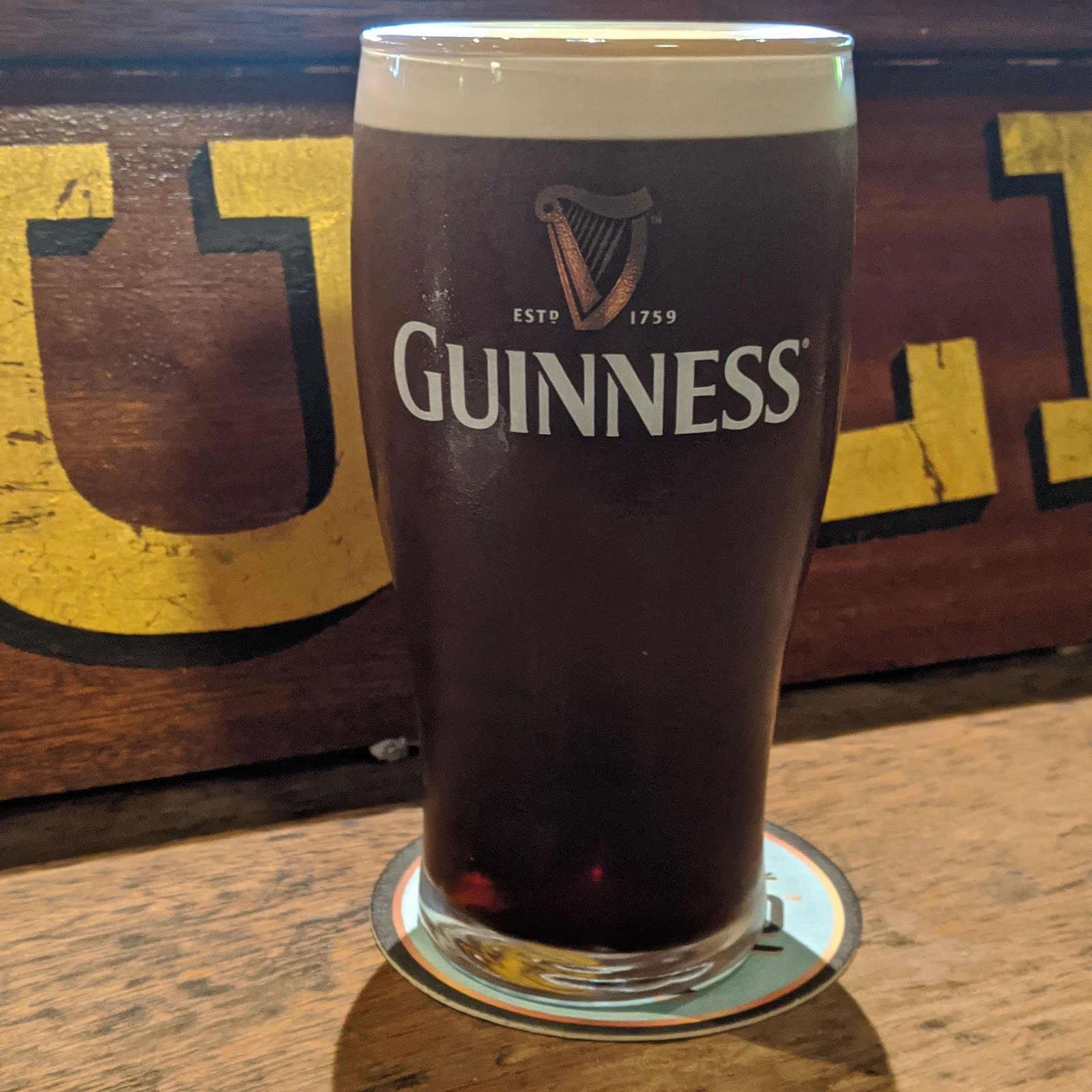 I never have understood the “Cult of Guinness.” There is nothing wrong with it but I find it a bit thin and not all that roasty compared to say the Porterhouse Plain Porter or the O’Hara’s Irish Stout.  A lot better than most country’s industrial beer I’ll grant you. I guess for many people growing up with bland industrial lagers Guinness was the first beer they had that was different. If you like it, enjoy it.

This sign, BTW, was not honored (or rather not honoured) 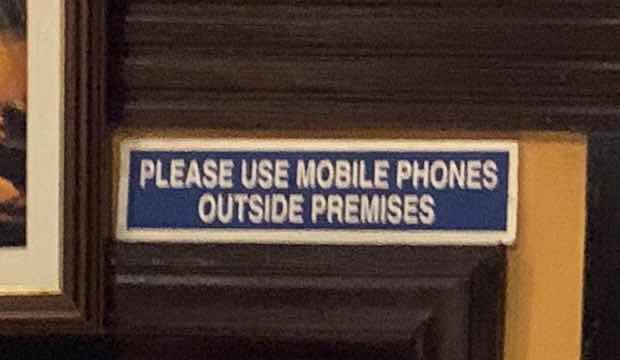 I had a place in mind for dinner and called up Google Maps to find where I should catch a bus. It gave me a stop and I headed in that direction. On the way I saw my bus take a turn away from where I was going and I realized Google was wrong. So I fired up the Transport for Ireland app, which is accurate but not as easy to use. I saw my stop was down by the river and headed that way.
Then I realized I was just around the corner from Bowe’s and thought why not stop in.
Bowe’s is another old Dublin pub. I included in the first edition of my Dublin beer guide (www.BeerGuideDUB.com) because they had a couple of interesting taps in addition to the usual suspects. Somewhere along the line I downgraded it as pubs with a bigger selection came along. Tonight they had three or four interesting taps and some good bottles and with the historical nature it probably is worth putting it back in the guide. Also nearly 300 whiskeys if that is what you like.
I ordered the O’Hara’s Irish Stout. Much better than Guinness! 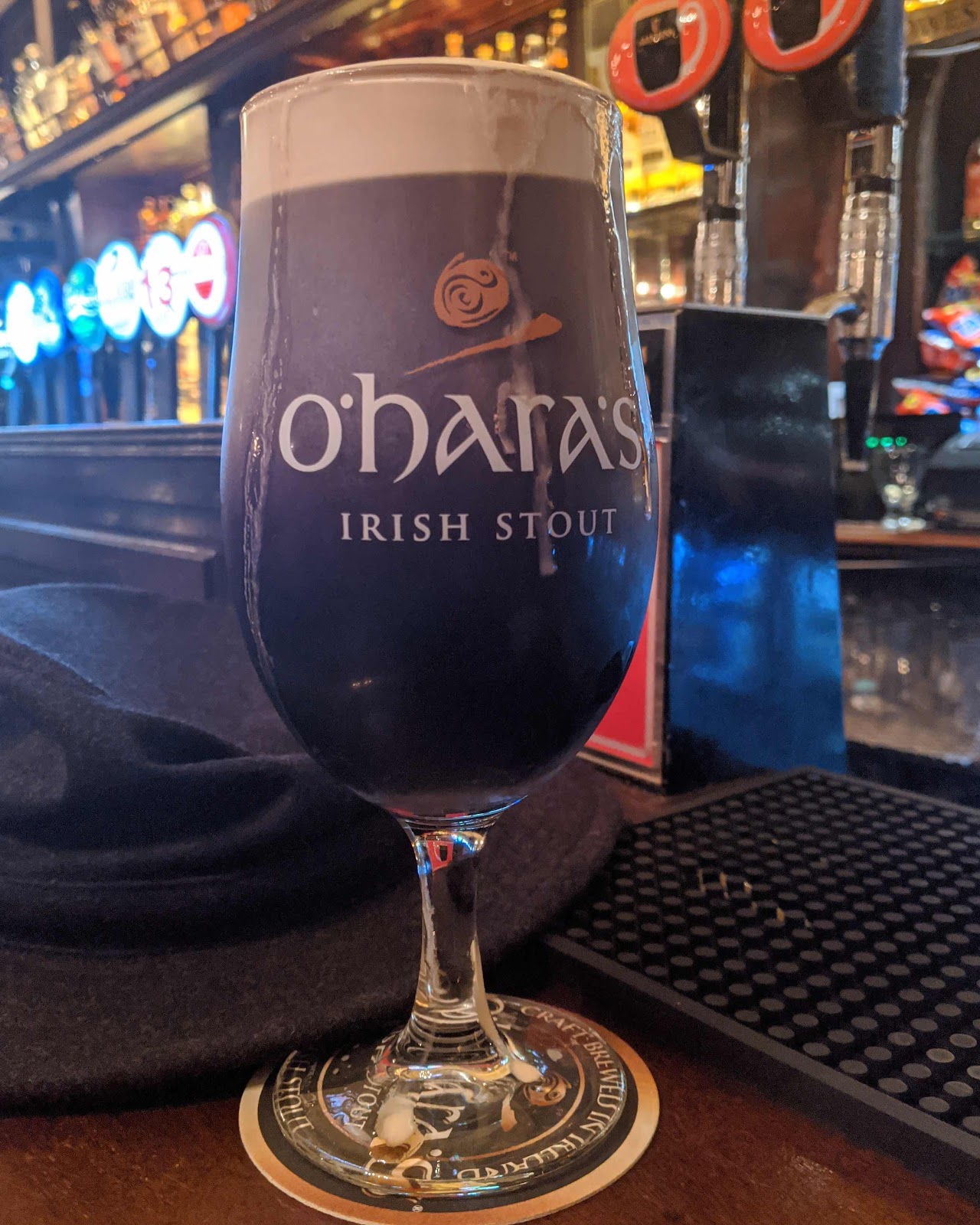 I do like that they have some old school Guinness taps. 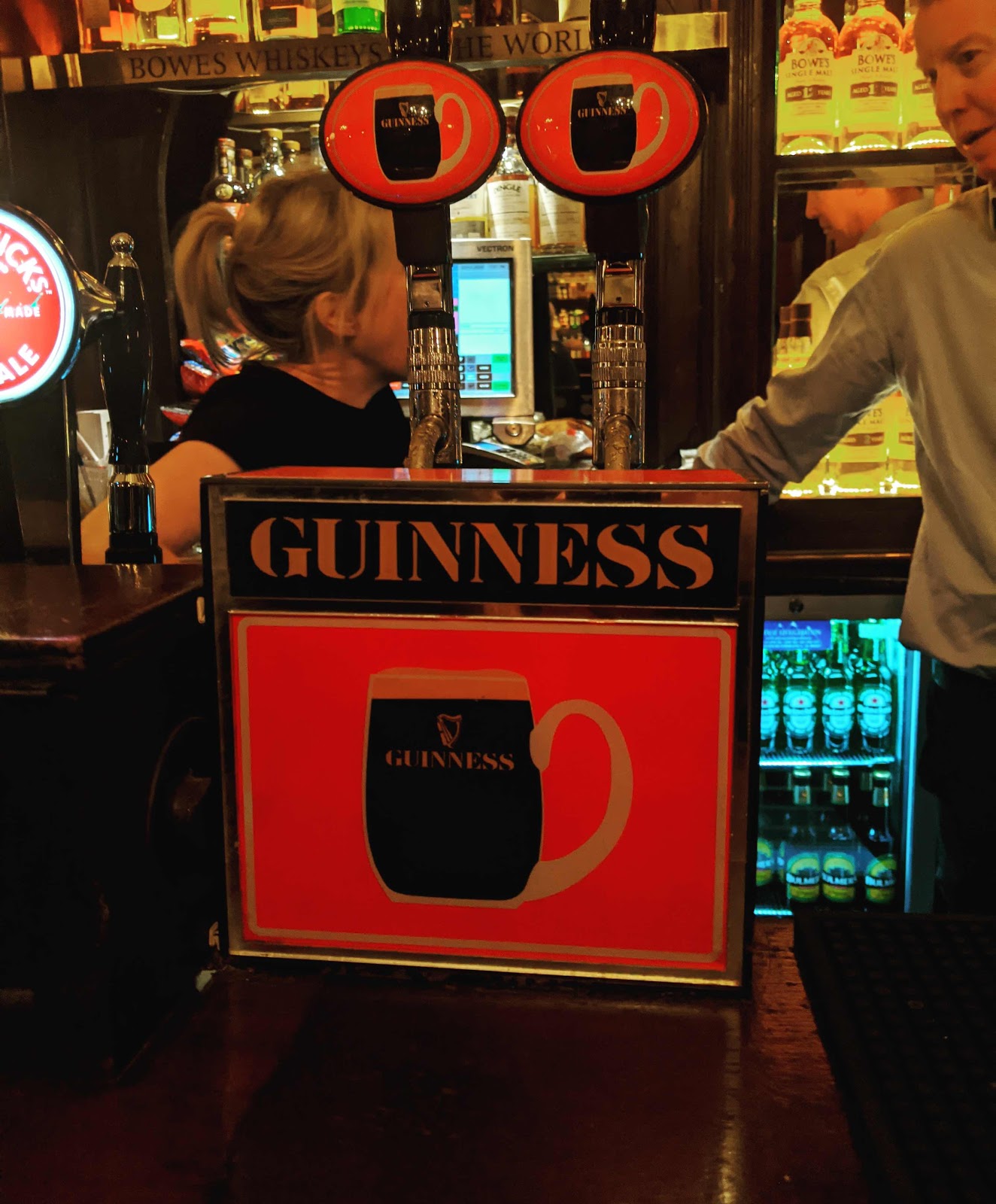 So one beer and done and back walking toward my bus stop. Then I passed Cassidy’s, another pub I hadn’t visited in a while. Why not?
I always describe Cassidy’s as where I channel my inner Danny Glover — as in “I’m too old for this shit.”  If I wasn’t the oldest person in the room, I severely impacted the mean age. Add in the fact that I had no idea what any of the songs playing were until my Google phone told me. But they have a good selection of beer. Believe it or not, I too was young once.
So I ordered a Trouble Brewing Ambush “Juicy” Pale Ale. The room was very dark with lots of red lights and I took this with the Night vision option on the phone. In person it was not so pink. 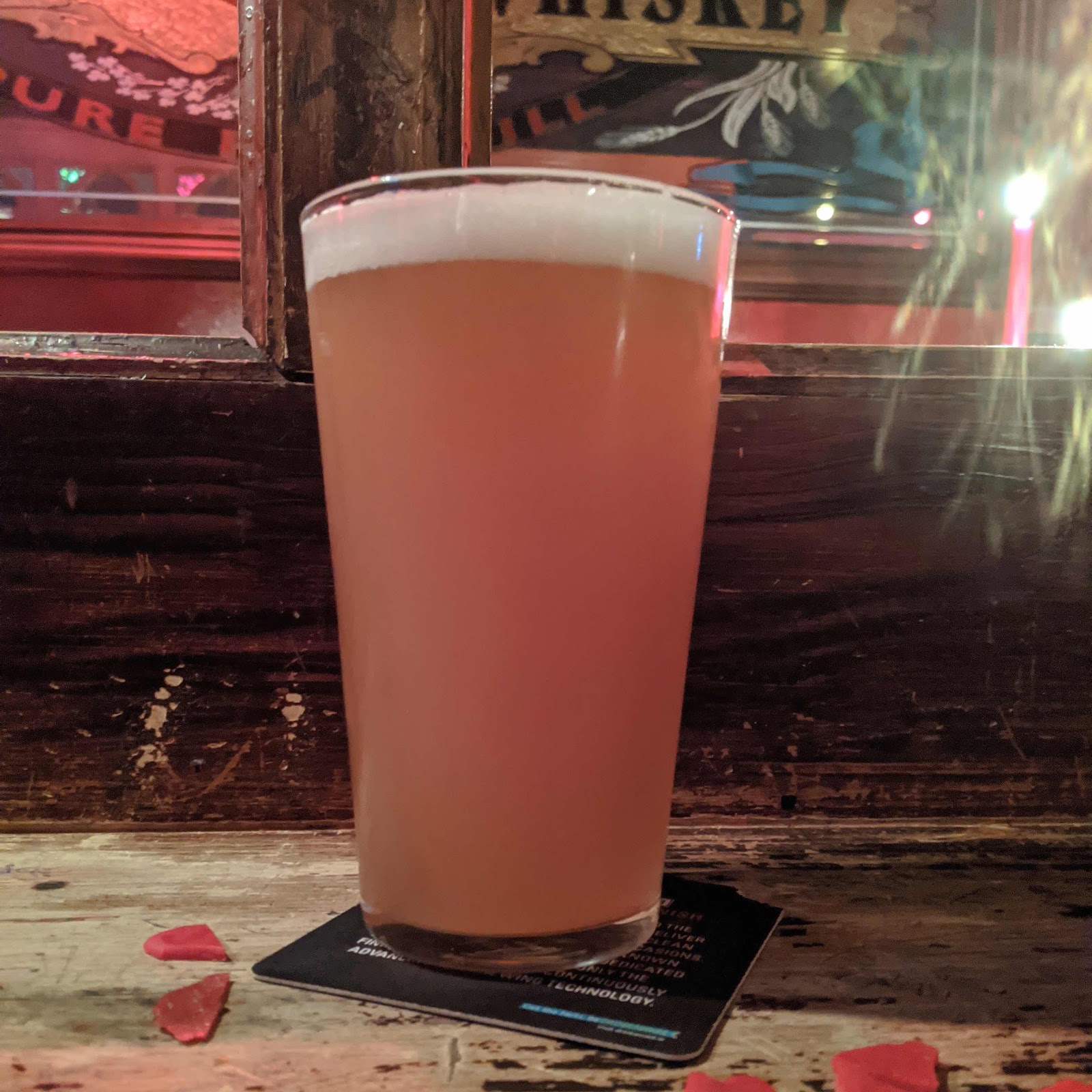 I realized I wasn’t going to make it to the place I had in mind for dinner, so I ordered one of their pizzas. I’m sure it was probably frozen when I ordered it but it wasn’t bad for a bar pizza. Filled up the empty spaces. 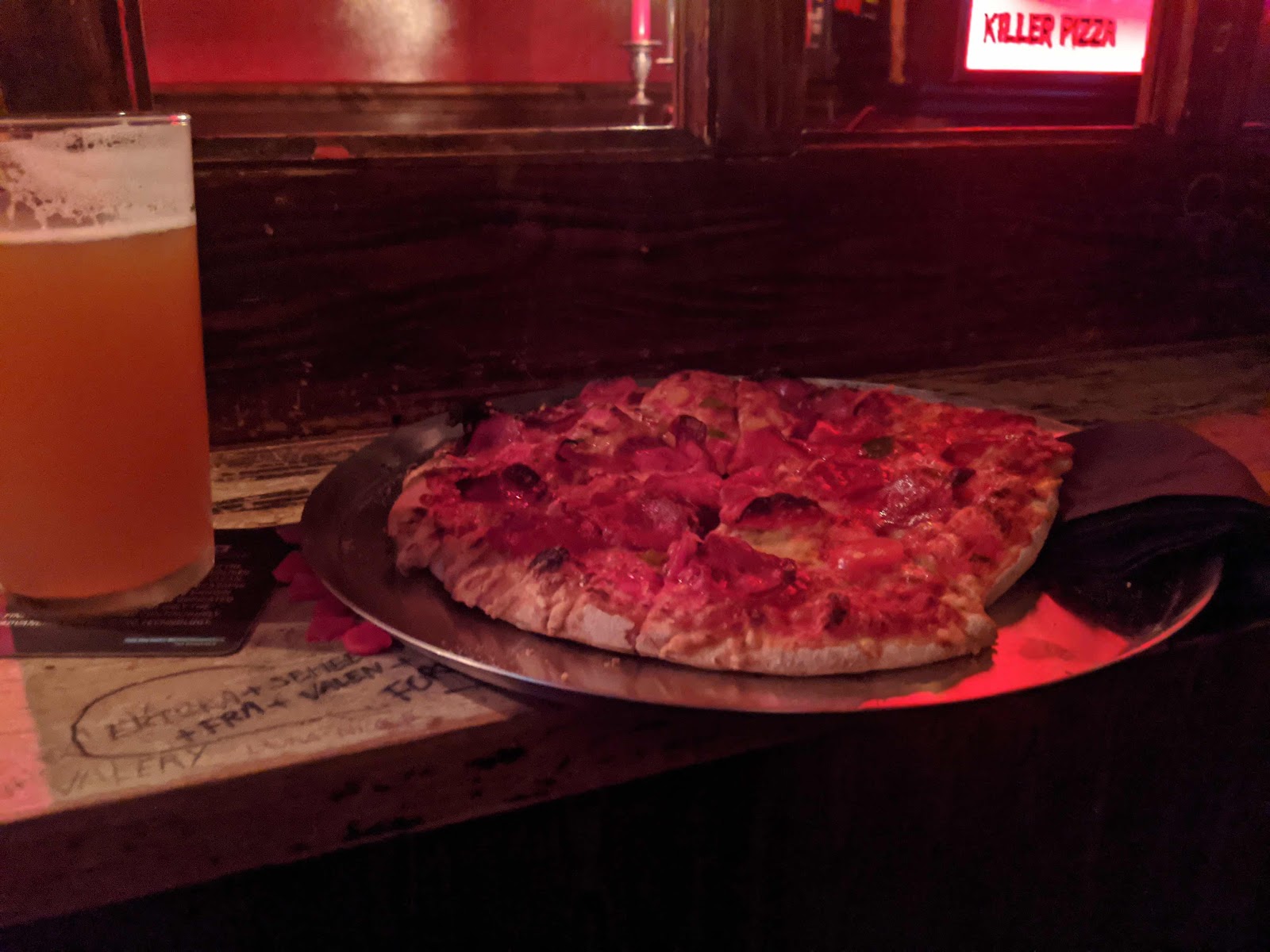 There was a LUAS (tram) stop right in front of Cassidy’s and a couple of stops later I was at my hotel. Tomorrow is another day.
Posted by The Mad Brewer at 2:24 AM

The weird sauce is taco sauce. That's what makes it a taco salad! How this substance evolved out of Mexican cuisine, if indeed it did, I do not know. Taco Cheese Chips is a classic late night Dublin dish; again no tacos are involved.

Porterhouse North / The Bernard Shaw is actually owned by the Porterhouse group but has been leased out for some time now. And AFAIK the Bodytonic beers are still brewed at Rascals. I hope the new Rascals brewery is on your itinerary: it's a real jewel of Dublin's beer scene.

I’ll take your word on the taco sauce. Writing this at Rascals — well worth the bus ride!