The day got off to a bit of a false start. I had intended to take a bus down to Dùn Laoghaire to check out a fairly new place, The Beer Keeper. Their website says they open at 1pm on weekends. But when using Google Maps the listed opening time was 4pm. I checked their Facebook page and it also said 4pm. So I sent a message thru Facebook and sure enough, the website was out of date. So scratch that.
I had additional issues with bus routing with Google Maps today and I think I figure out at least part of the problem. Somebody said that Dublin Bus recently rolled out a bunch of route and schedule changes. I think what happened on some of these when calculating a bus route they forgot they drive on the left in Ireland. I noticed two times that the stop at which Google wanted me to exit was actually a stop on the bus line in the opposite direction. That is, it is on the side of the street the bus would have stopped in right hand drive country. In most cases that problem wouldn’t matter as usually opposing stops have the same name. But sometimes they are offset a bit and have different cross streets and different names. And with one way streets in the older parts of town the routing of buses in different directions is completely different. Now I may just be blowing smoke as most of the time things work fine.
Anyway, I decided to head to 57 The Headline instead. This is one of my favorite places in Dublin — good beer selection and good food, 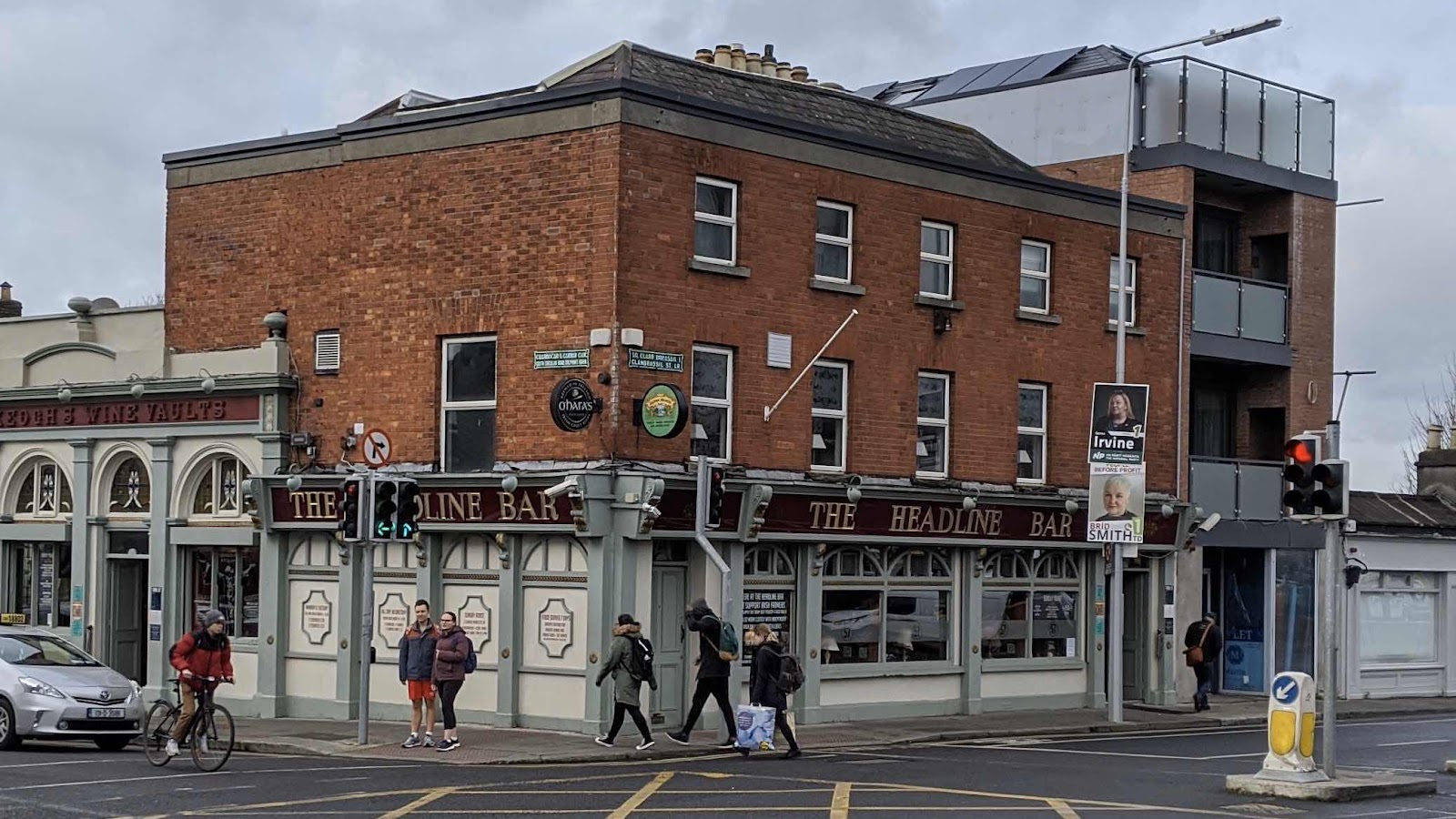 I started off the with O’Brother Brewing Bringer of Light Session IPA. A good start to the day. 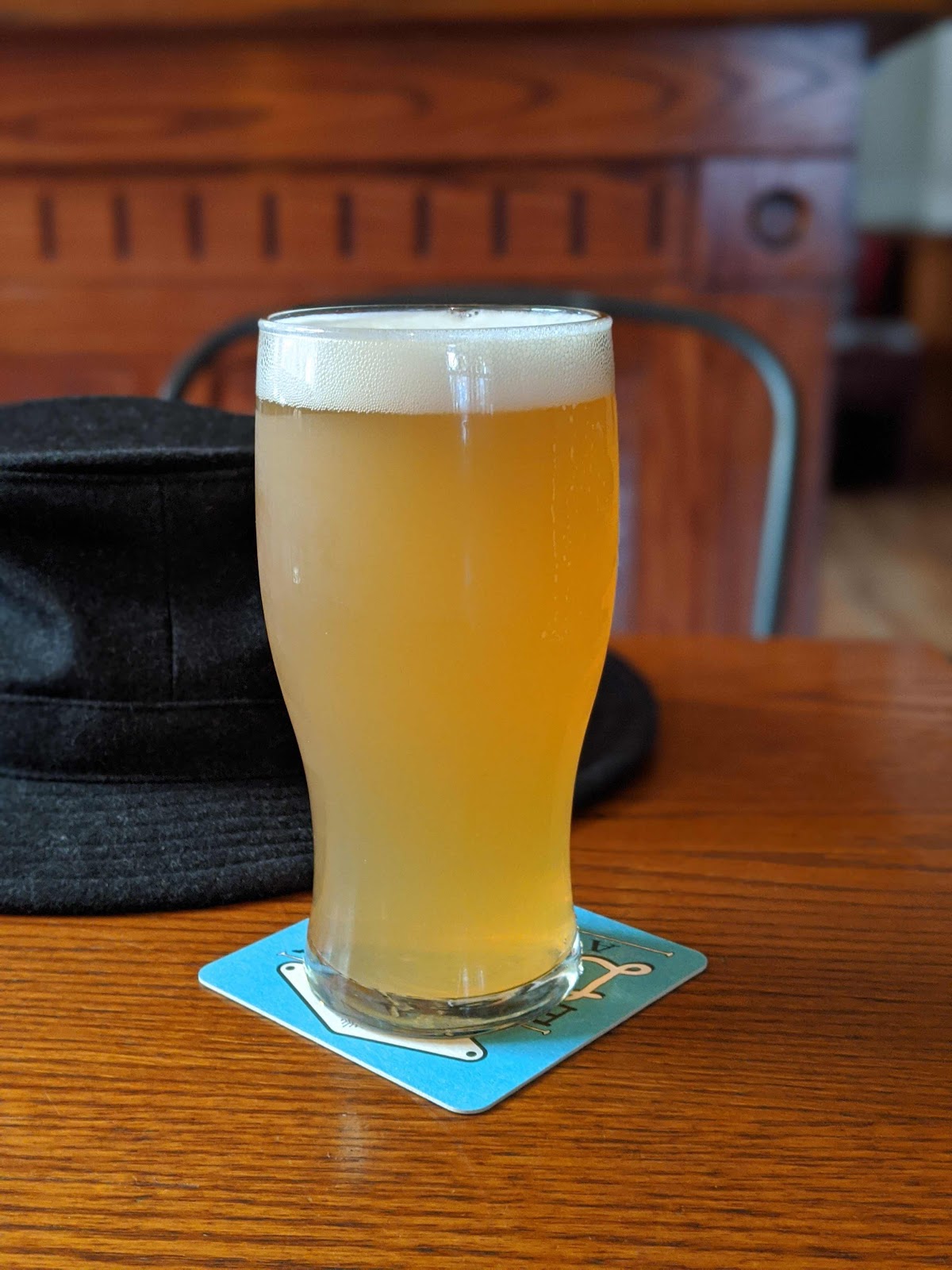 It was really past time for lunch so I ordered the Fish & Chips. Was told the fish were still swimming the day before. 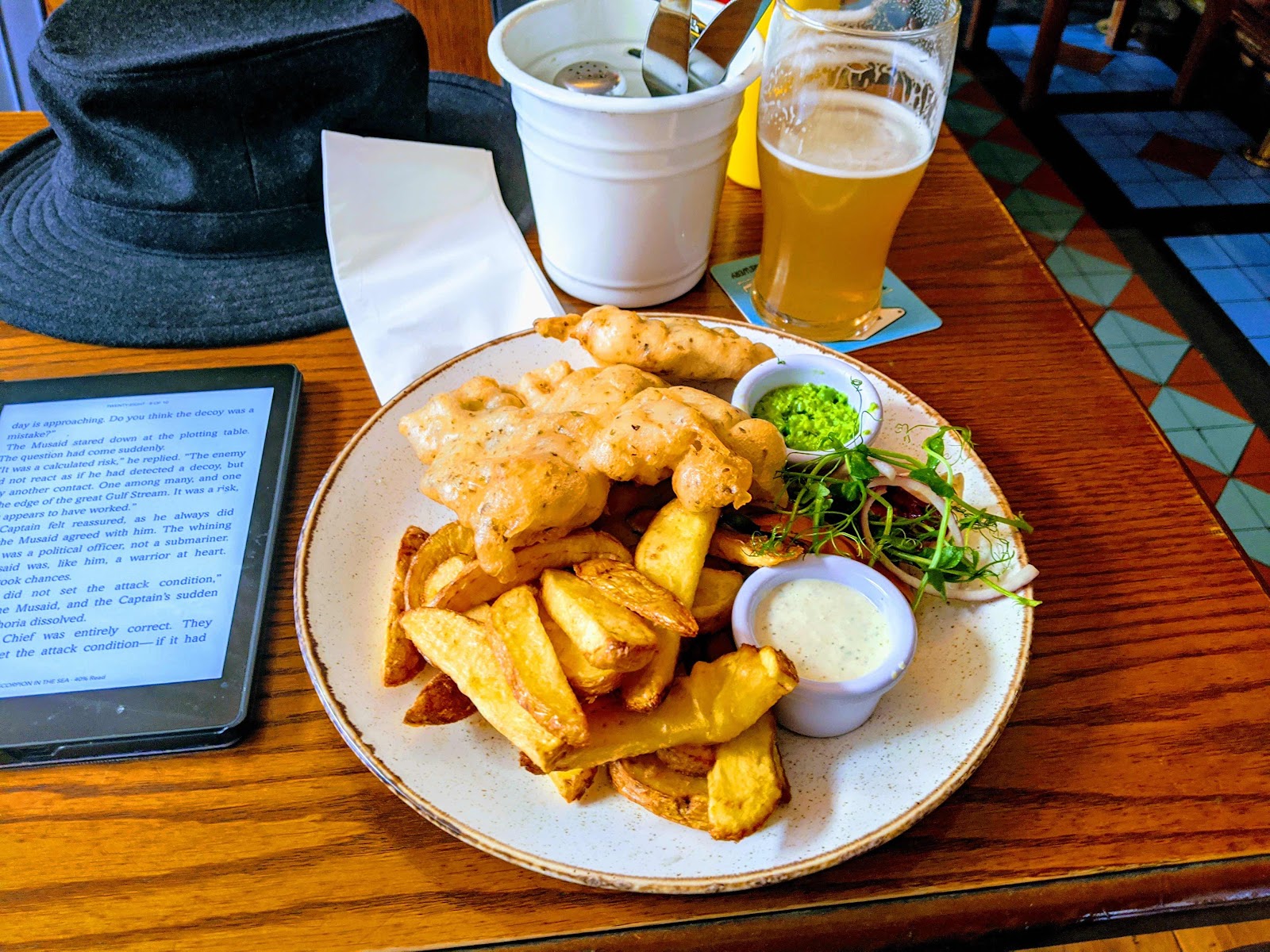 I followed that up with another Session IPA, this one called Graffiti from Trouble Brewing. A quite different flavor profile than the first but still good. 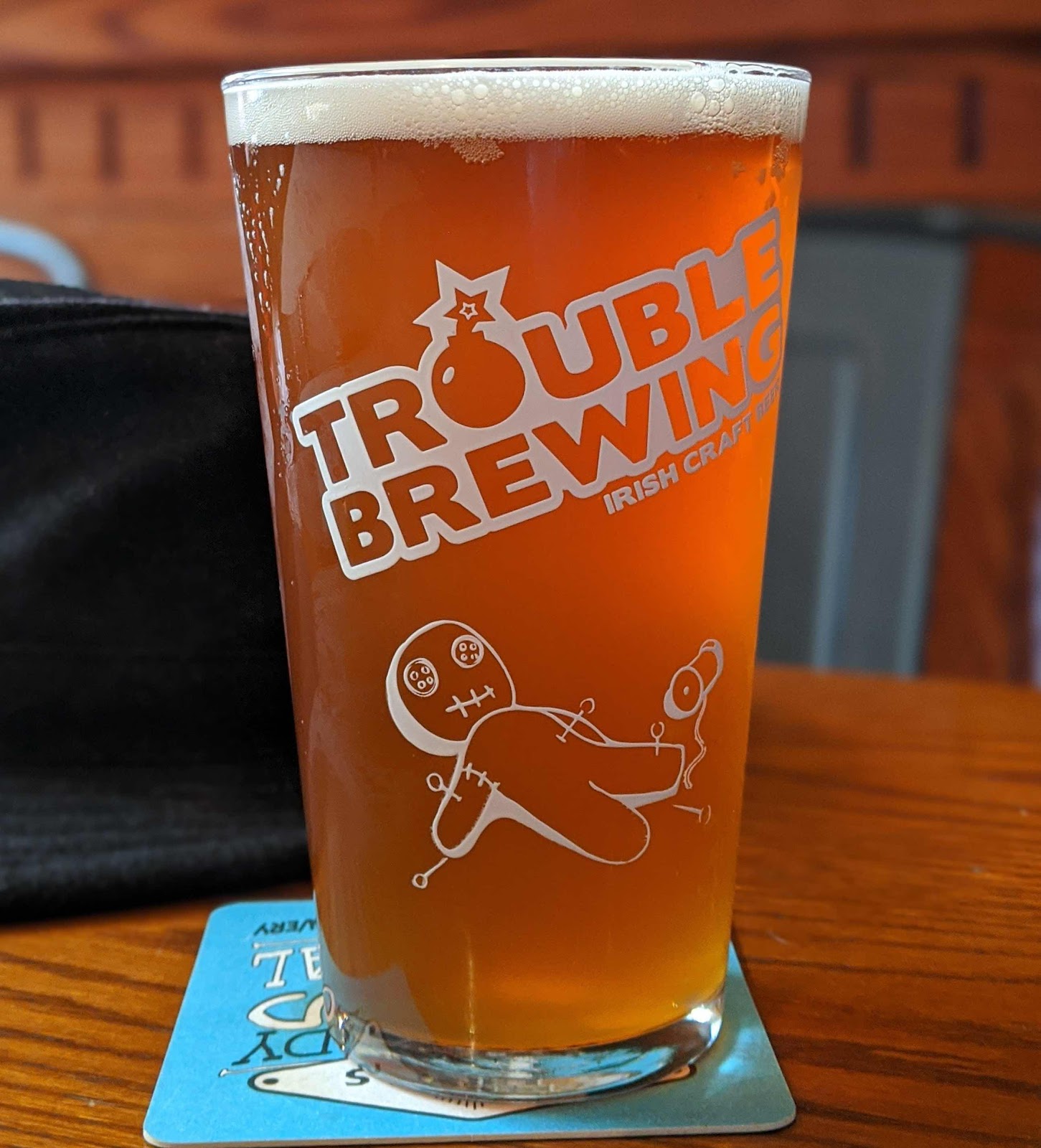 Always like to see a familiar face when traveling... 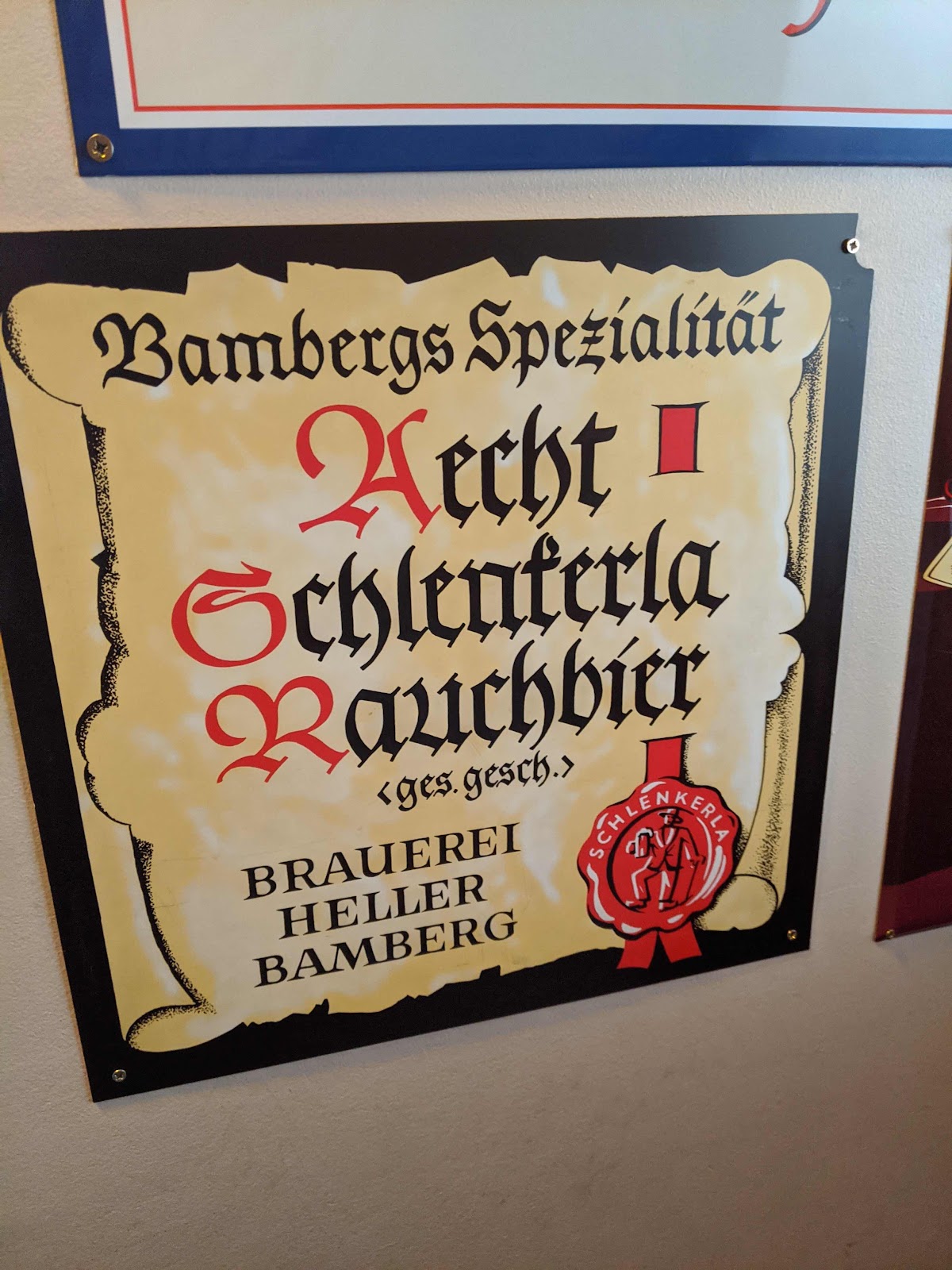 A couple people on twitter said to be sure and try the Two Sides Brewing Shop Local Double Dry Hopped IPA. Two Sides is a joint venture between 57 The Headline and The Brickyard Pub. I forgot to ask where the beers are actually brewed, but it was really good. Bursting with hop character. 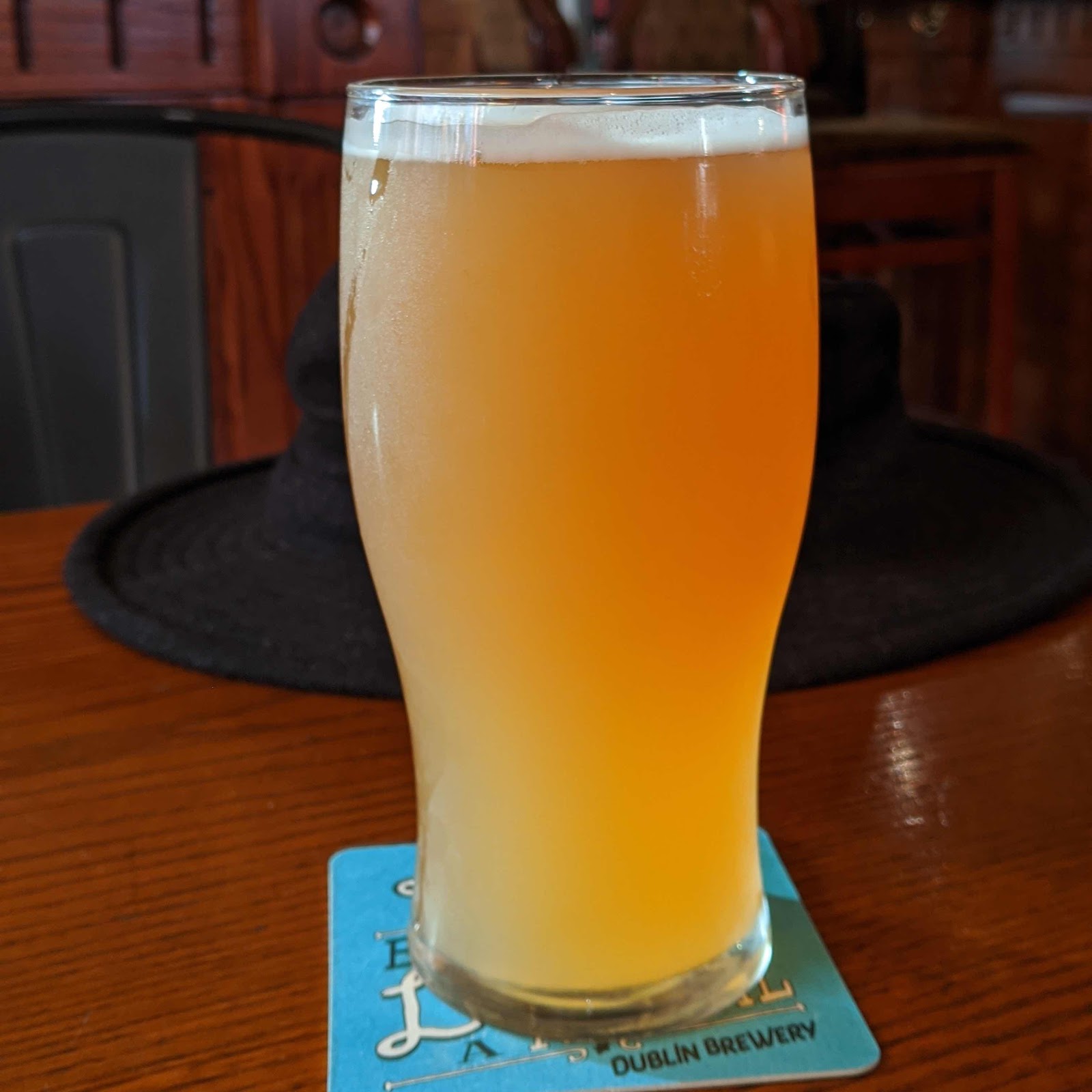 It was time to move on so I thought I’d head to another favorite that I had yet to visit, The Underdog Pub. At one of the stops along the way, a prospective passenger asked the driver “Do you go to such-and-such?” The driver laughed and said “No, whoever told you that?” “Google Maps,” she replied. Said the bus driver “Google is always wrong.” So I am not the only one. 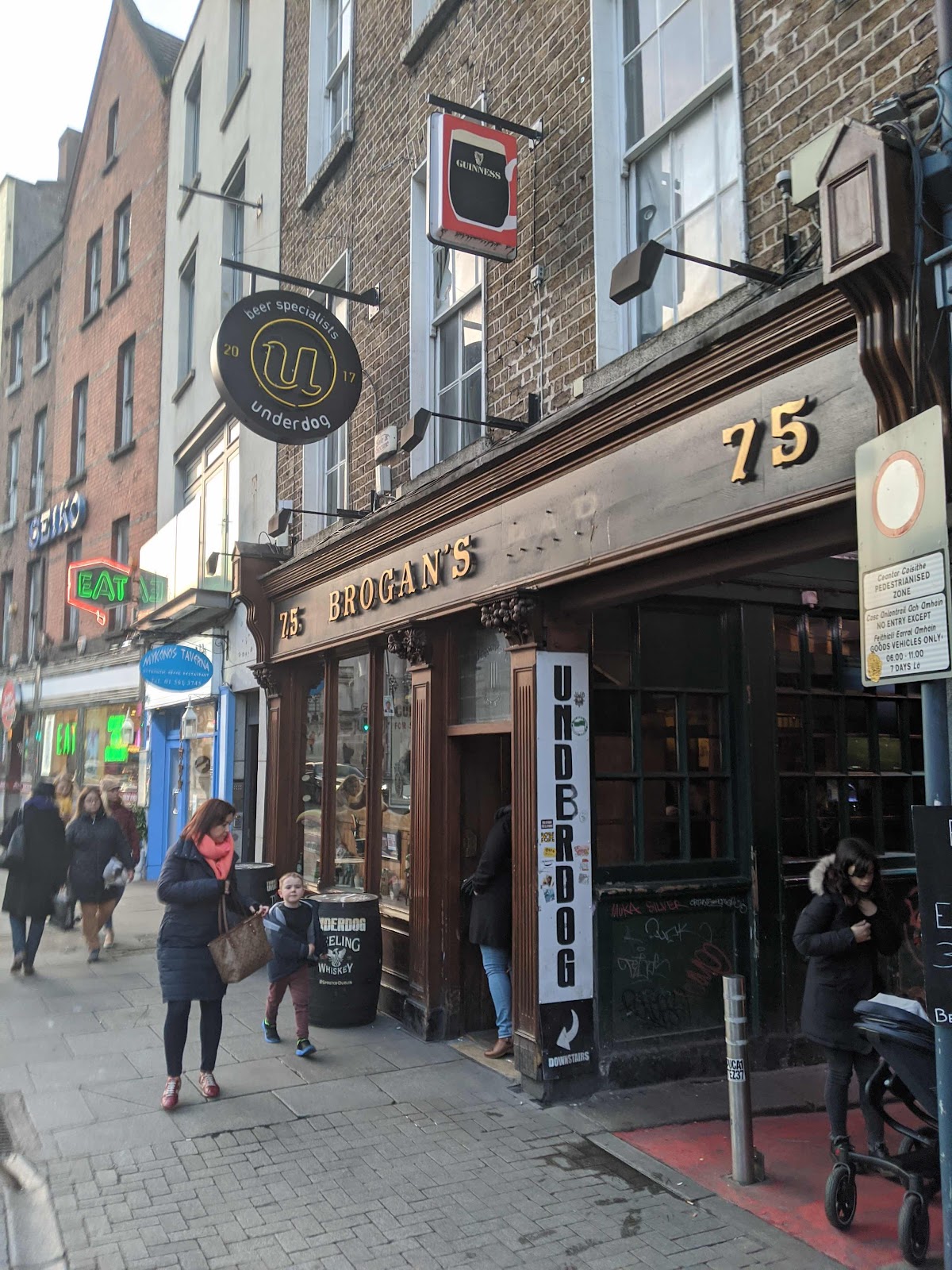 Underdog (as you might expect from the name) is downstairs, in a very cave like cellar. They have three fixed and 16 rotating taps, plus a beer engine. The cask beer usually goes on Friday and is not replaced once its is gone,
They have the usual video board by it was dim in the pub and I didn’t realize the picture was not quite in focus but you get the idea.

I hadn’t had a beer yet from Yellow Belly so I ordered their Snooze Button Stout. Very nice. 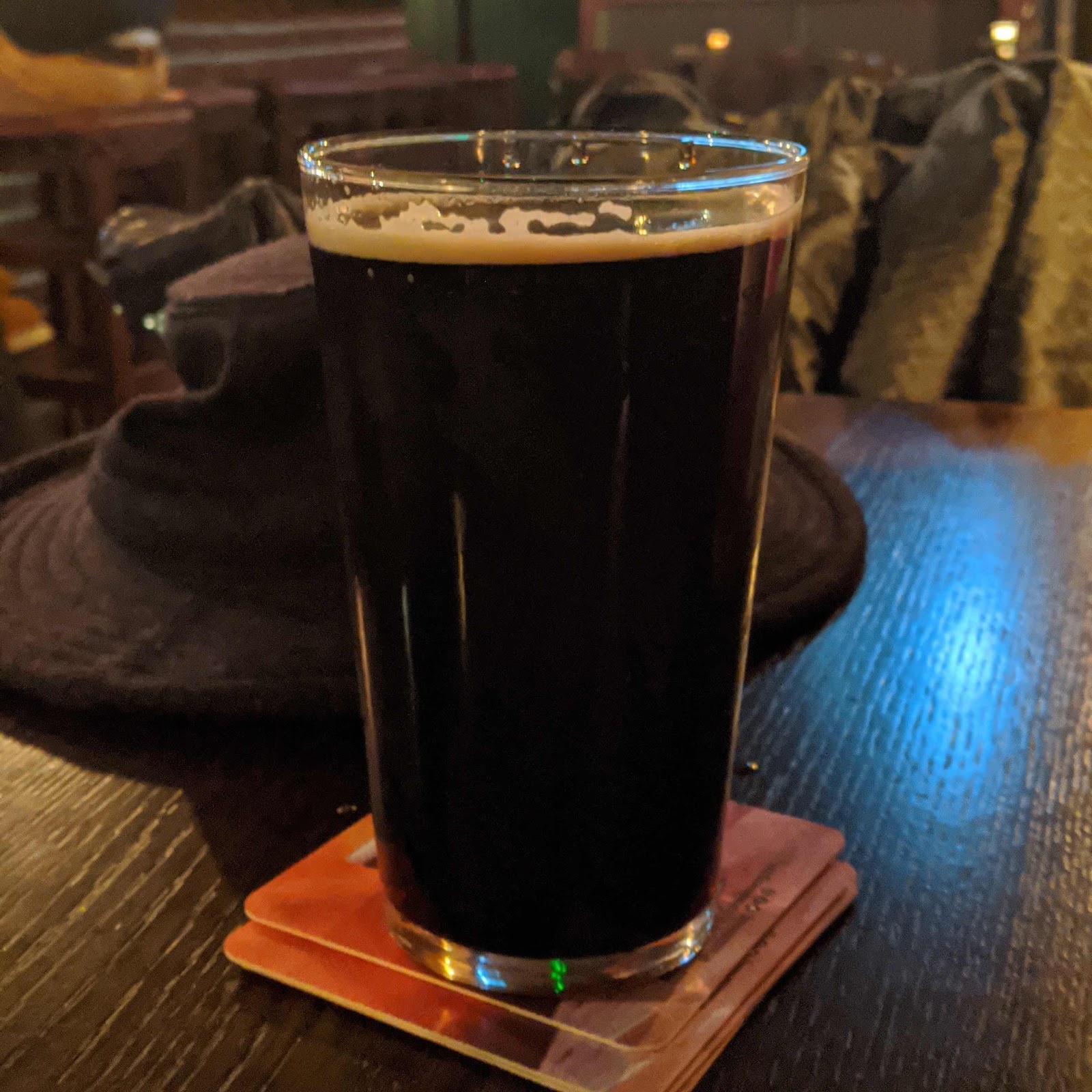 Next up was Hope Brewing Foreign Extra Stout. A bit stronger at 6.5% and lots of flavor. These Irish breweries know how to brew good dark beers. 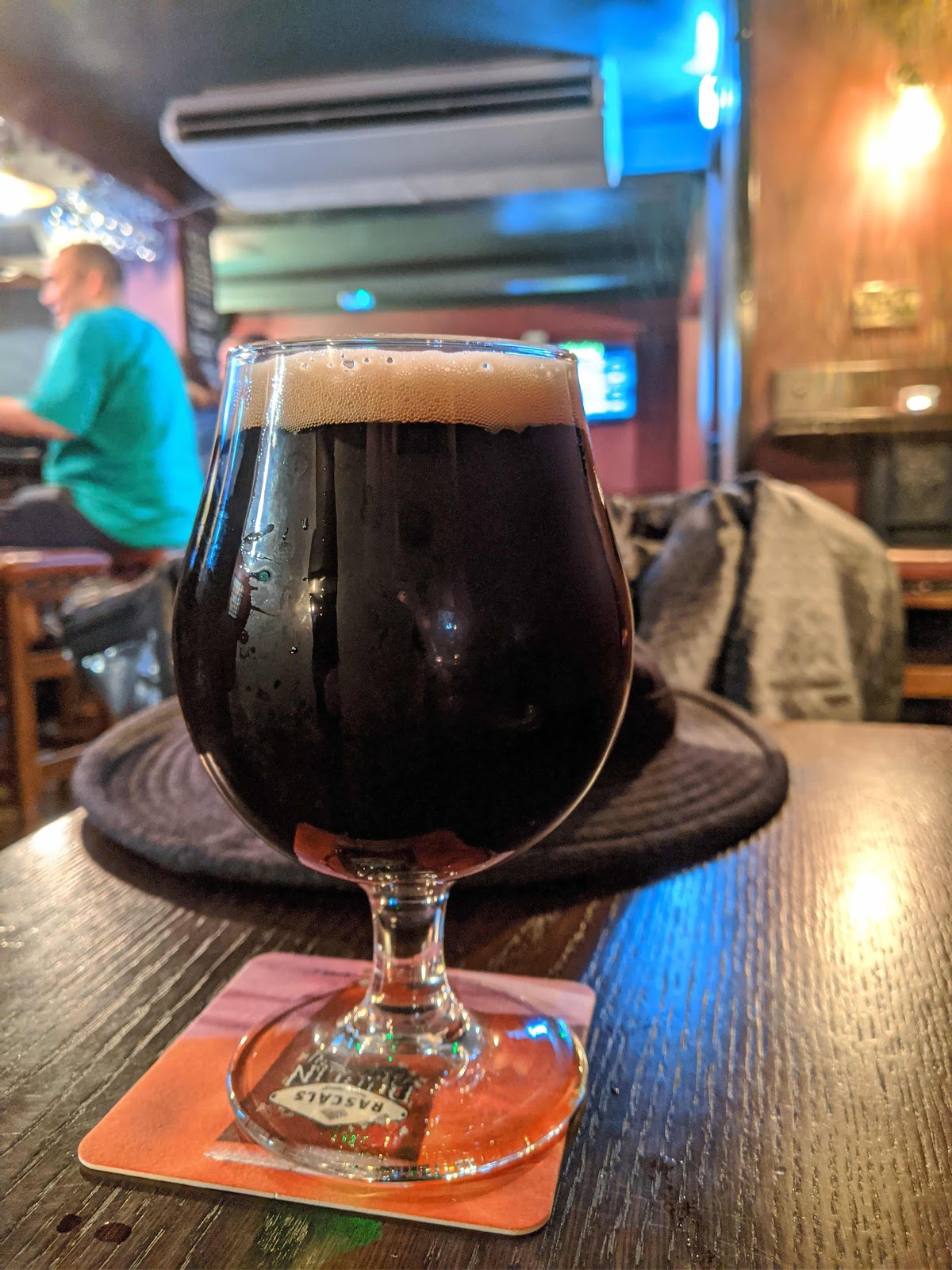 I wasn’t ready to leave so I had an O’Brother Liberty Pilsner to sort of clear my palate. Also a very nice beer. 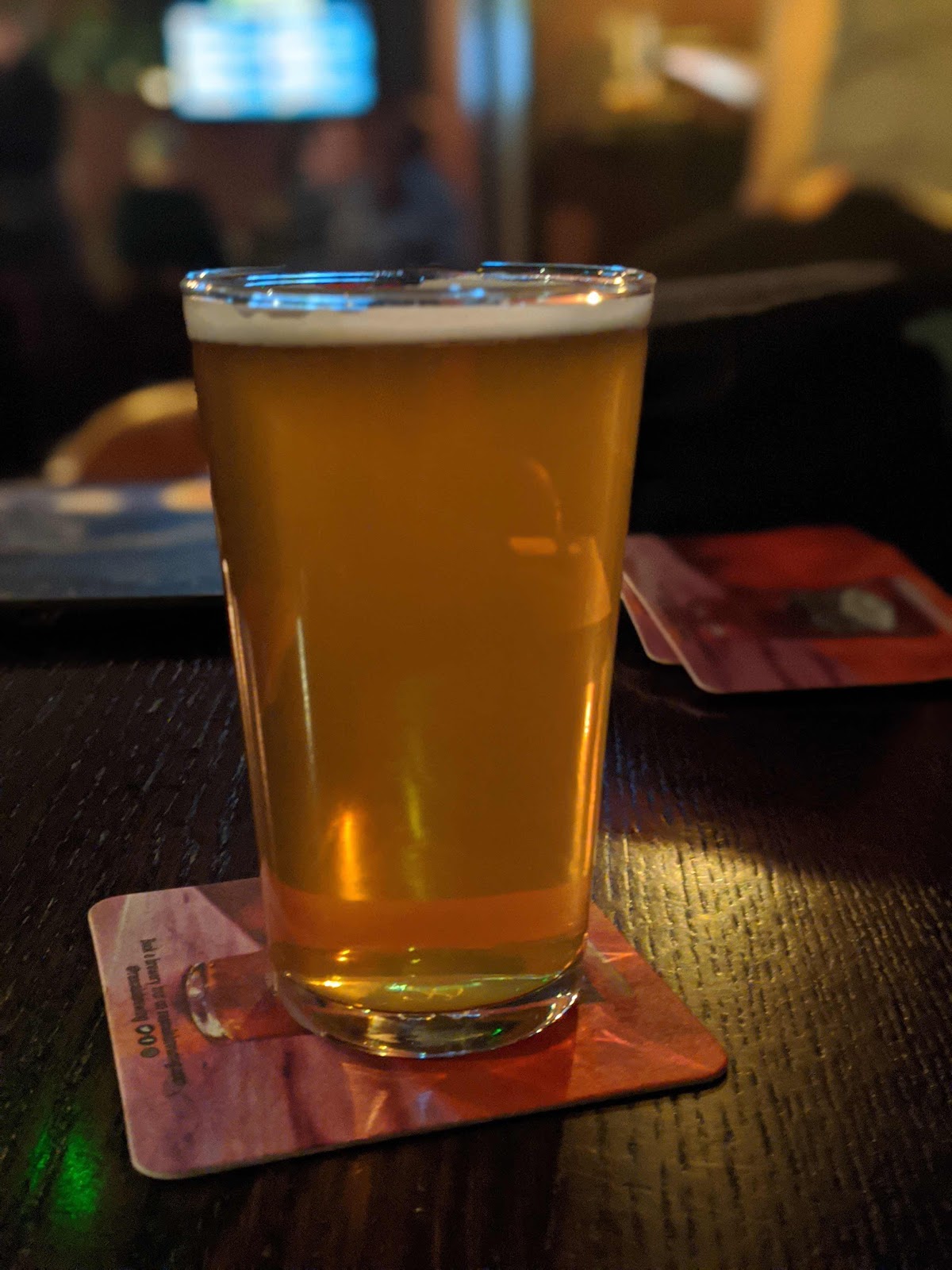 Lots more was going on — in the Underdog I met a guy who used to live within of few miles of me in Los Angeles but has lived in Stockholm for the past 8 or 9 years. He was trying all sorts of bottled beers and sharing them around. I only remember the Cantillon but there were some interesting Irish beers as well.
Posted by The Mad Brewer at 2:11 AM

Two Sides beers are brewed in Dublin at Third Barrel Brewery. It does a lot of contracting for various local brands at the moment, including Pleasuredome, The Format and Crafty Bear.

I asked out at The Brickyard and they told me the same :) Also that a new version Shop Local was in the works with different hops.. They also brew the T O’Brennens house beers, I was told.

Yes, I think the "Two Sides" referred to are the northside and southside as the brand belonged to 57 and O'Brennan's before Brickyard got involved.

Thanks a million and please continue the enjoyable work.풀싸롱