Another Day in Prague

Are you bored yet?
It looked to be a wet day, a good day for indoor activities.  Not that, I’m here by myself. Drinking beer.
I headed over to OSSEGG Praha, which was originally at tap room for the OSSEGG brewery in Osek, near the border with Saxony (Germany). But they’ve installed a small brewery here and claim all the beers are locally brewed. No reason to dispute that. 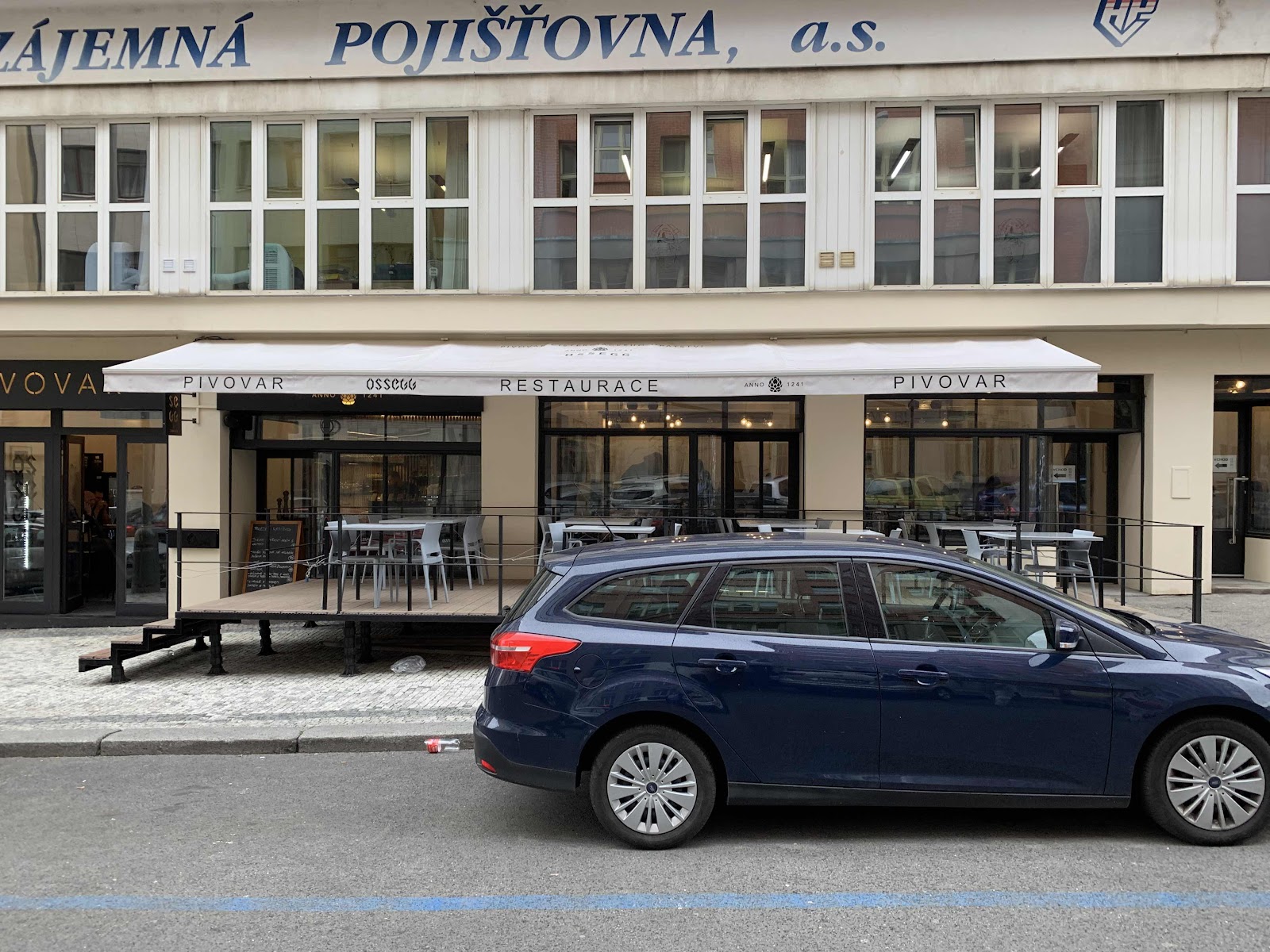 I’m big fan of the beer and the food. 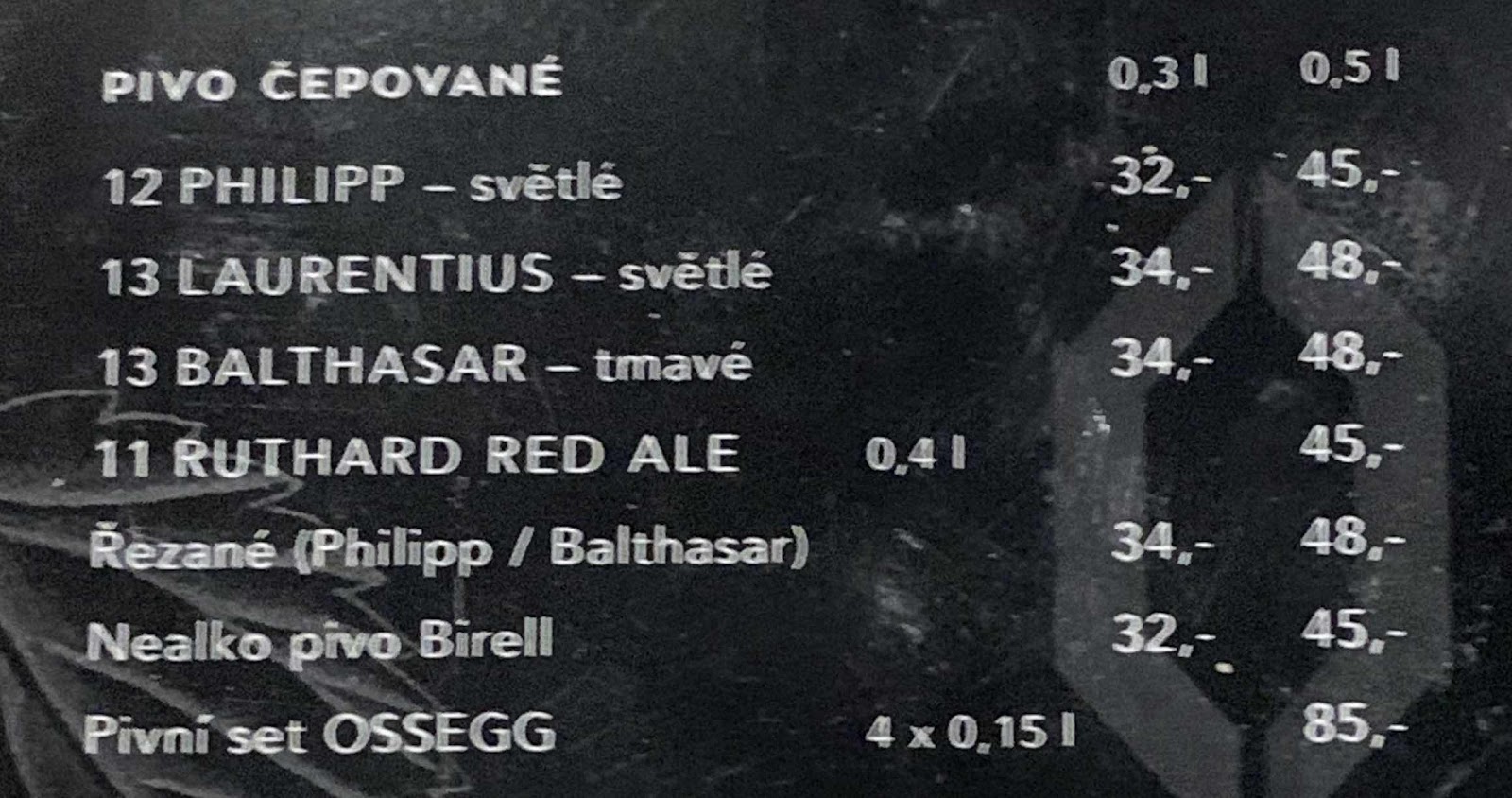 I started with Philipp 12º, nice and clean and just enough bitterness to keep you interested. 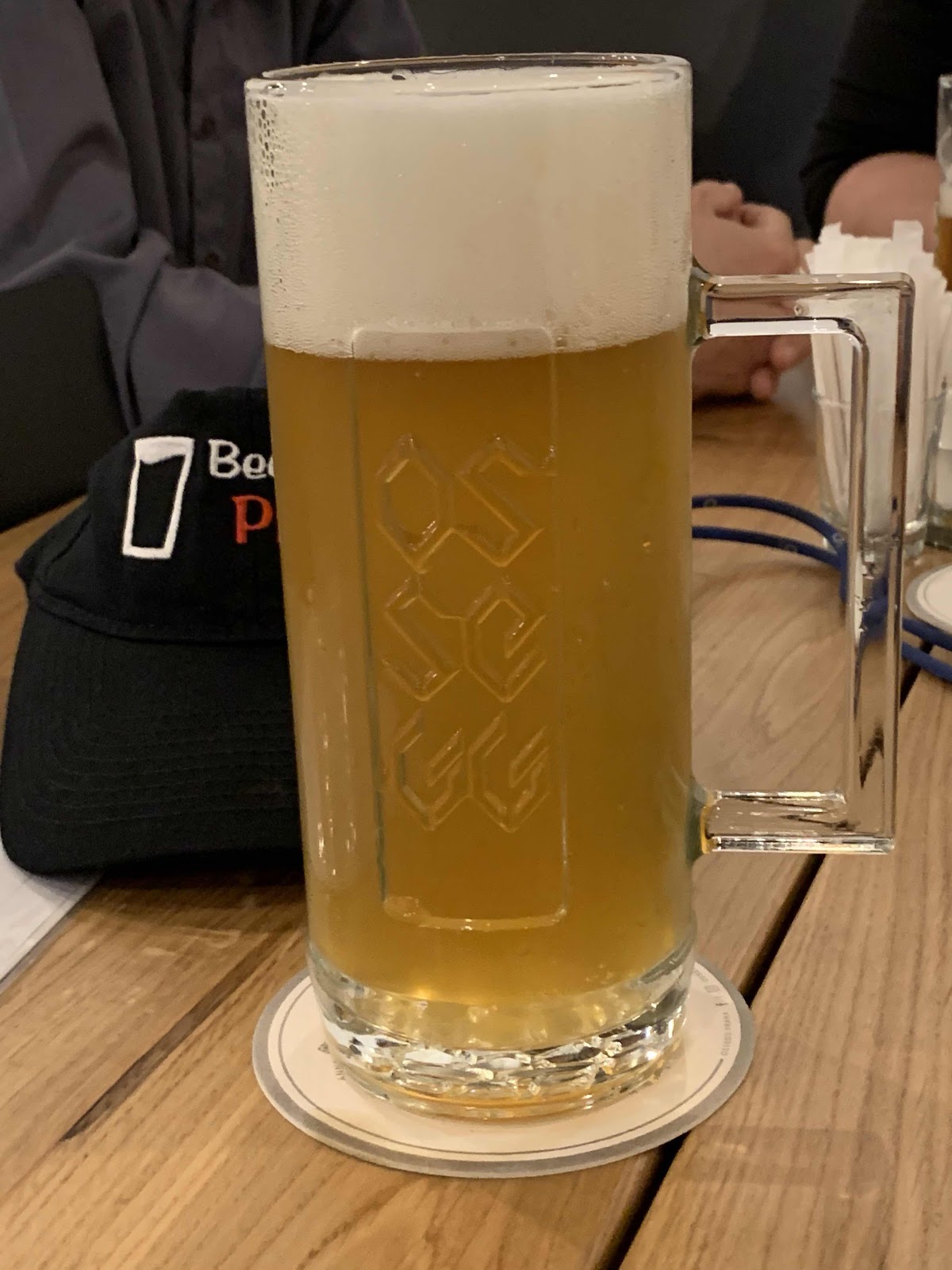 For lunch they have a daily soup and 3 different entrees. Asked for the beef one, was told it was sold out and ordered the roasted chicken breast instead. 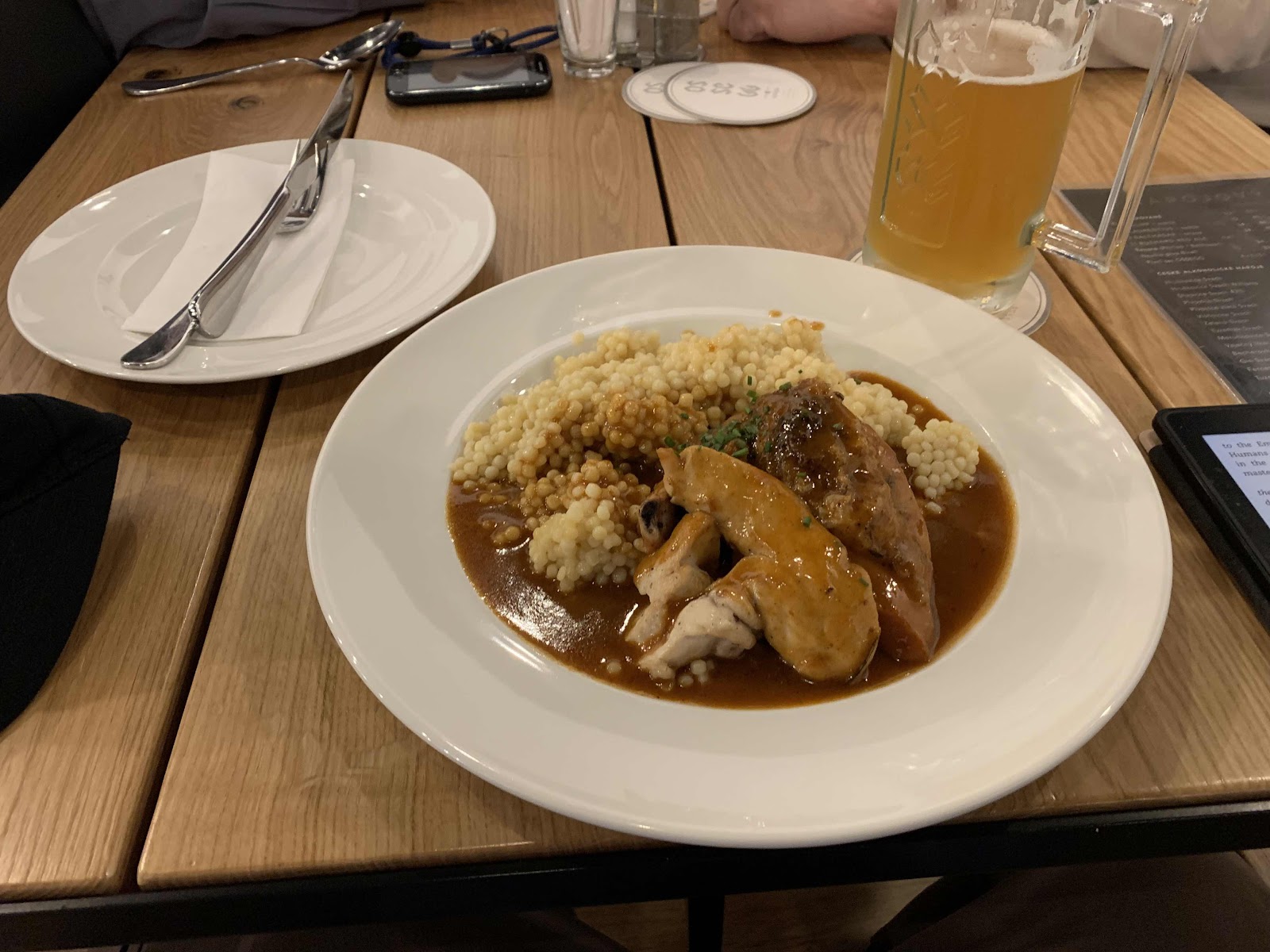 It came with at first I though was corn but turned out to be some very small pasta like thing. I didn’t take a picture of the menu so I don’t know what it is called, but it soaked up the gravy quite nicely, which is its purpose, I assume.
I forgot to check the chalkboard for special beers and noticed that they had a 10º beer with some suitable Latin sounding name, so I ordered one. 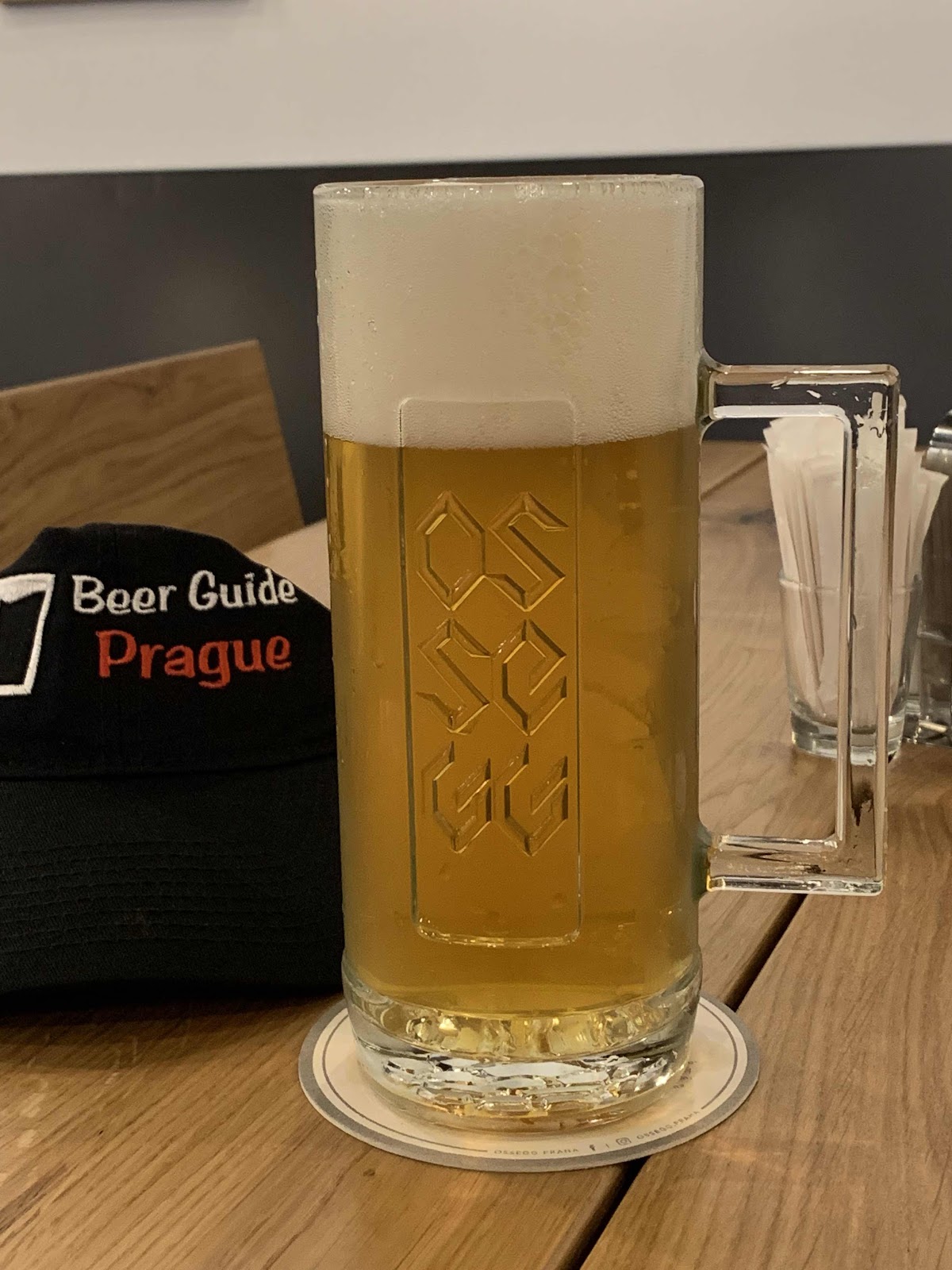 It was clearer than the 12º and while good, one was enough. I probably would have liked it better if I’d had it first.
When I came out the rain was really starting to come down.  So I hopped on a number 11 tram and rode it to the end station. Sure enough, the rain had let up a bit by the time I got to První Pivni Tramway. 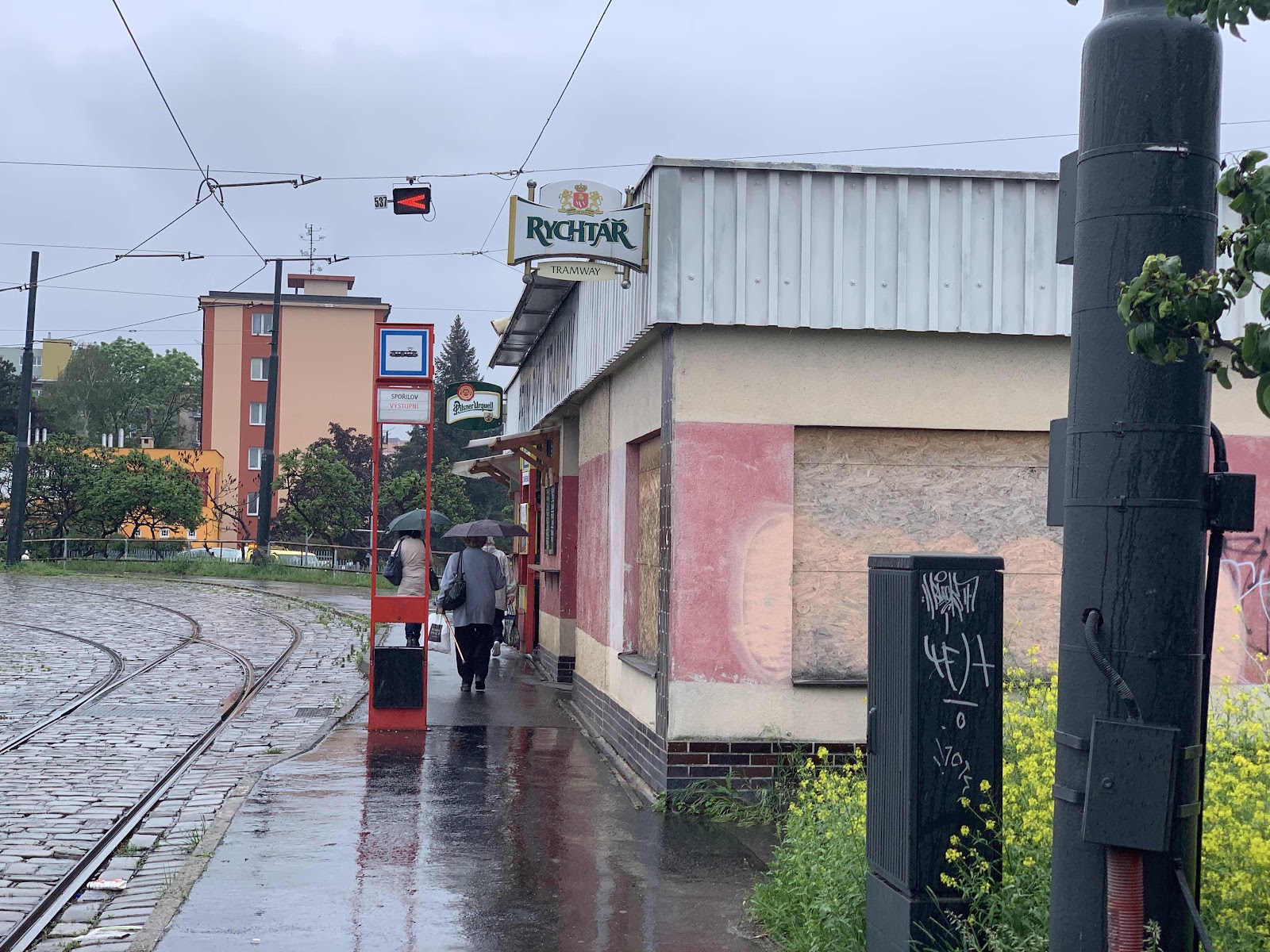 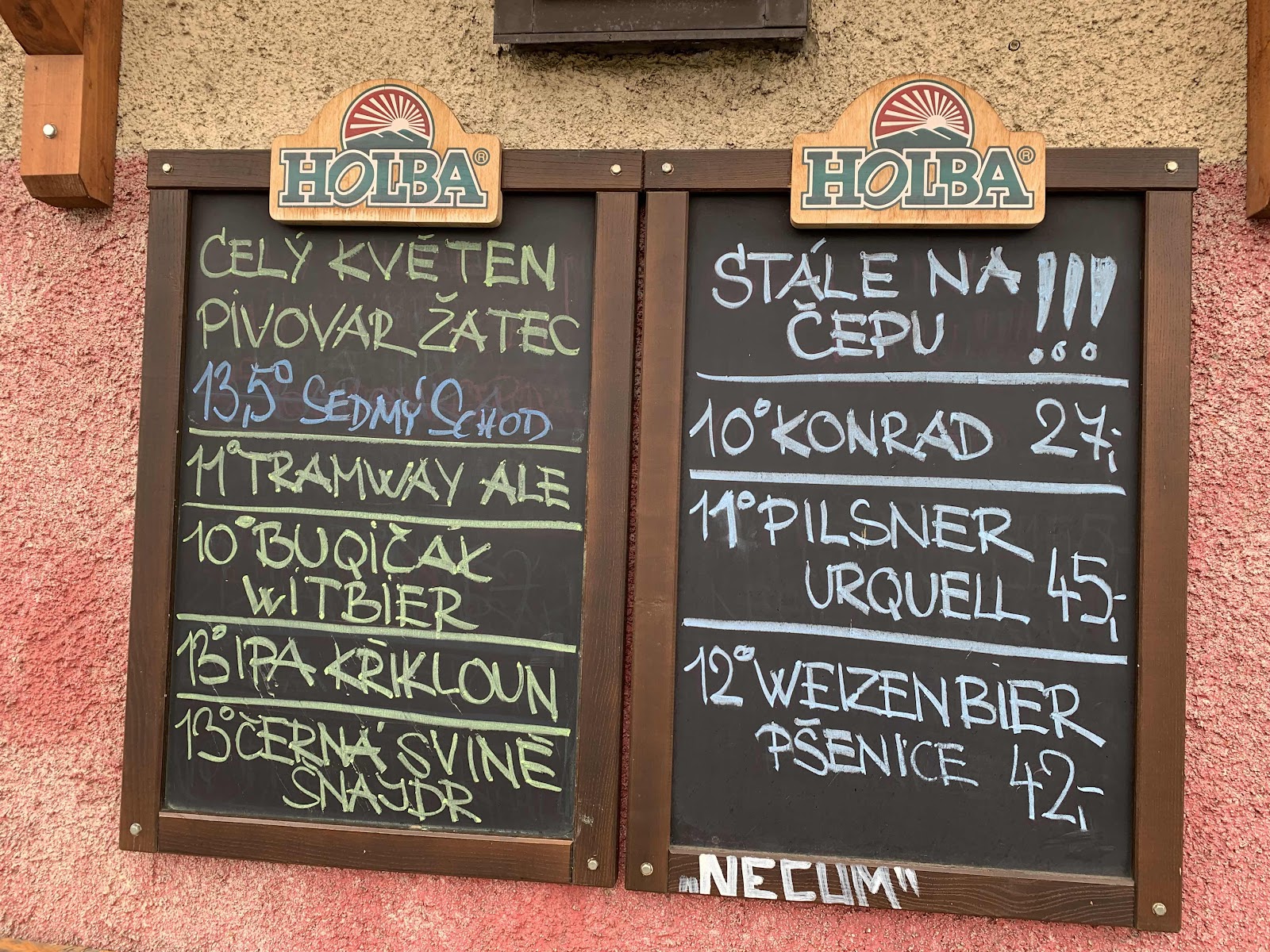 But when I got to the door there was a sign saying they weren’t going be open for another 90 minutes. That has happened to me a couple times before. Then I just hop back on the tram and go have a beer or two at Pivovar Bašta and head back. Didn’t do that today, just got back on the tram and headed for the city center.
There is a lot of street repair going on in Prague and that can mean tram lines are canceled or rerouted. For example, you can’t get a tram to Jiřho z Poděbrad right now (or until July) — the closest tram stops 3 blocks away.  So I haven’t visited any of the pubs around there and thought this might be the opportunity.
So soon I was at Beer Geek Bar, which technically wasn’t open for 15 minutes yet but people where going in already, so in I went, to find out why the early start. 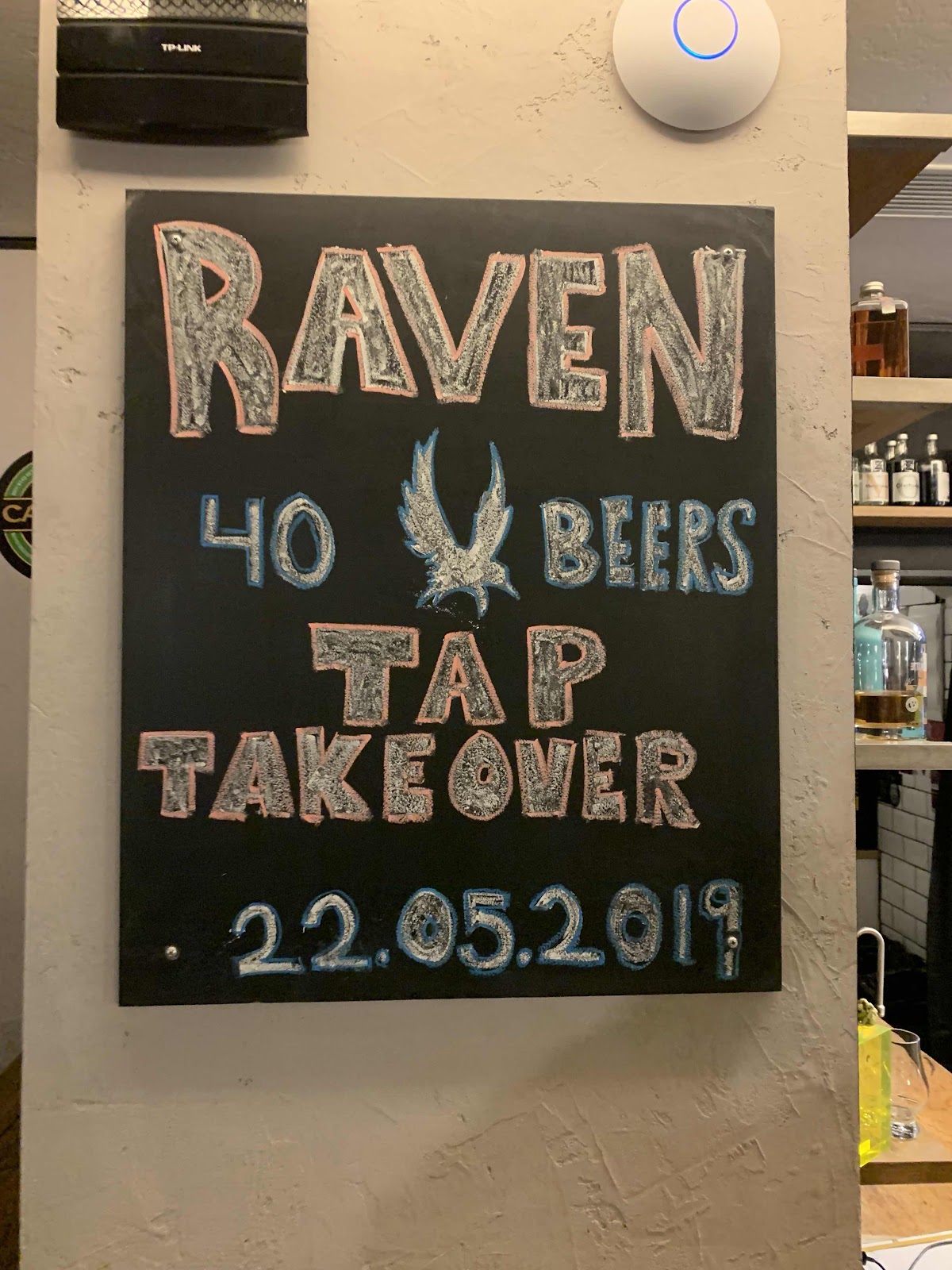 Yep, a tap takeover. All thirty taps and two handpumps were filled with Raven beers. Pivovar Raven is a fairly new brewery in Plzeň and I’ve generally like the beers I’ve had, but I’m not ready for 32 of them. Especially since many of them are the same beer with different flavors, include 8 different faux-Berliner Weisse. 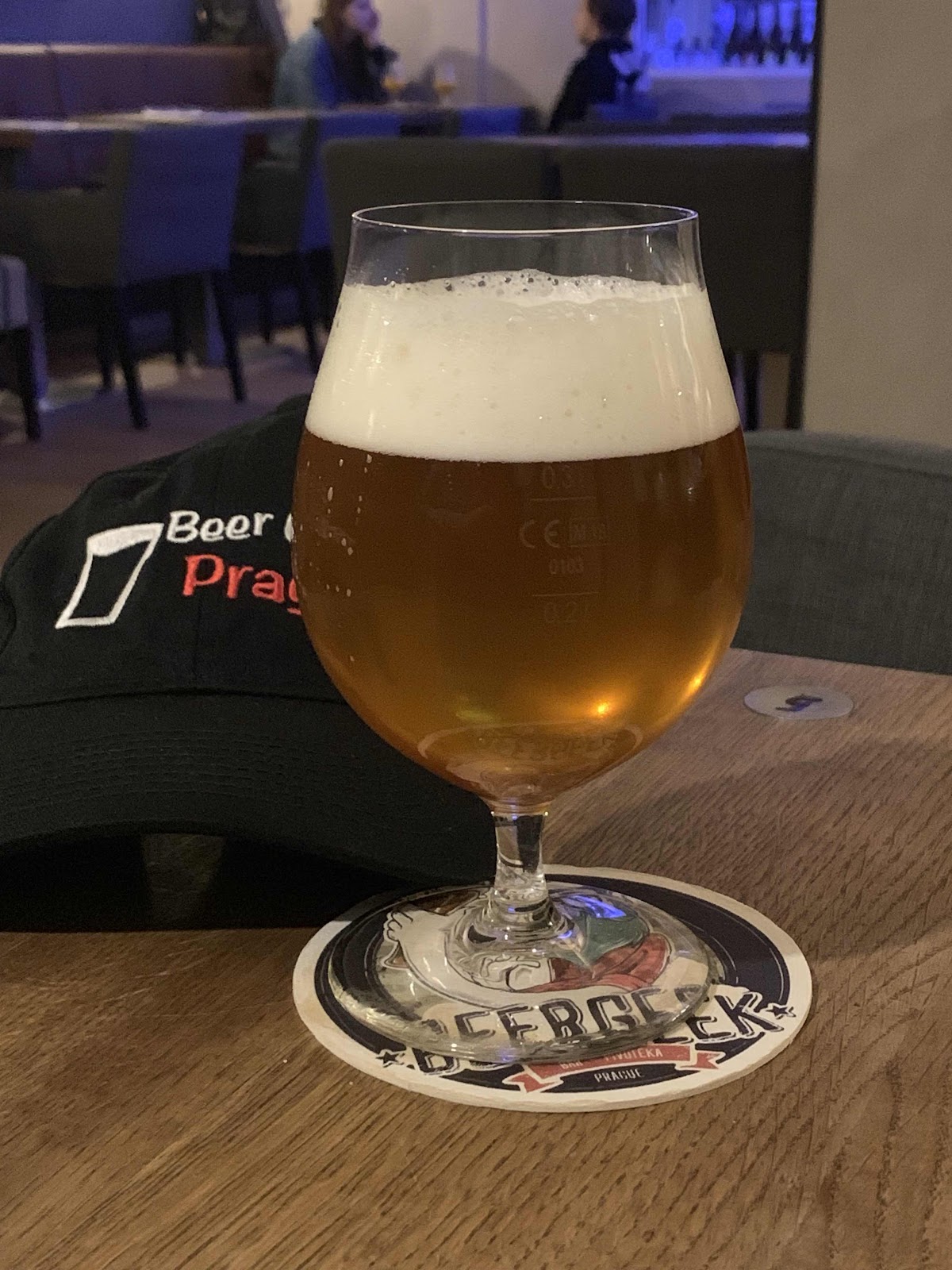 It was fine but I’d not put it in the top tier of similar beers I’ve had this trip.
It thought I should at least try one of their other beers and number 29 caught my eye “Brown Ale with Stroopwafels.” I love stroopwafels. I’ve been known to come back from Amsterdam with a 12-pack box. So I ordered one. 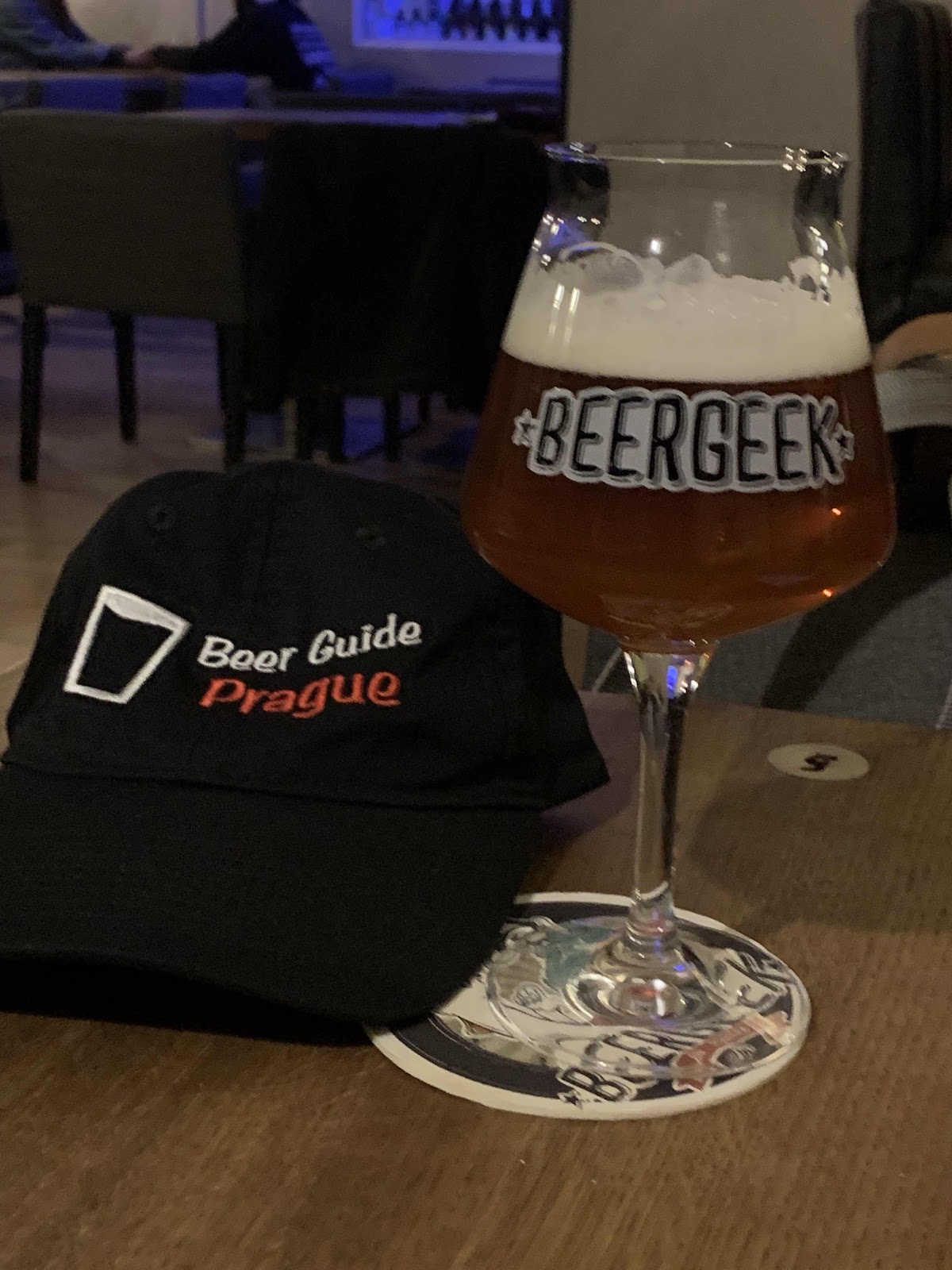 It was maybe a bit light for what I think a brown ale should be. But you definitely got the taste of waffle and it was very sweet from the caramel. I can’t imagine drinking a half liter of it, but .3L was fine.
Not far from BeerGeek is Pivni Šenk U Kaciře or “Beer Tavern of the Heretic.” 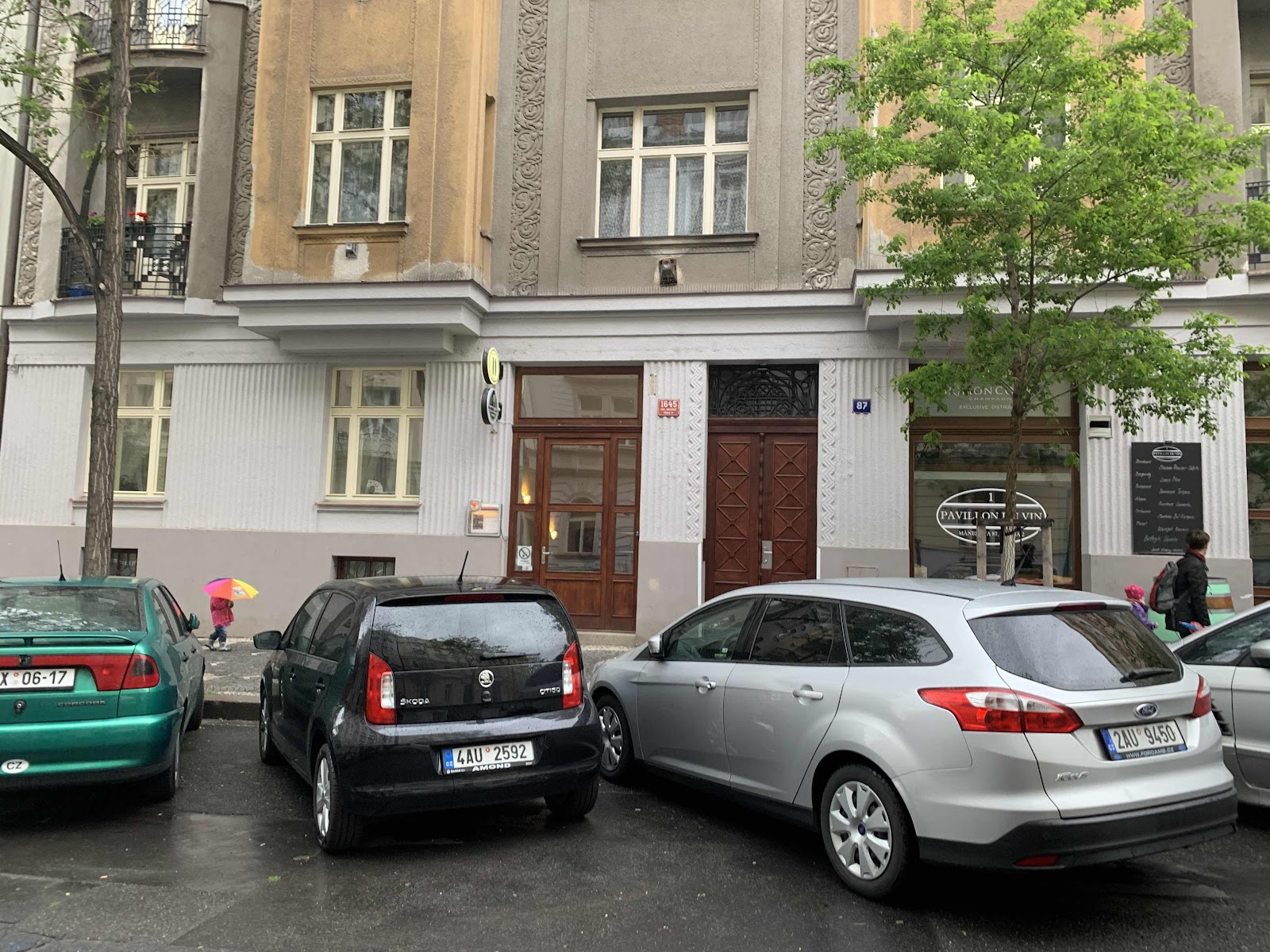 They usually have 8 beers on tap. 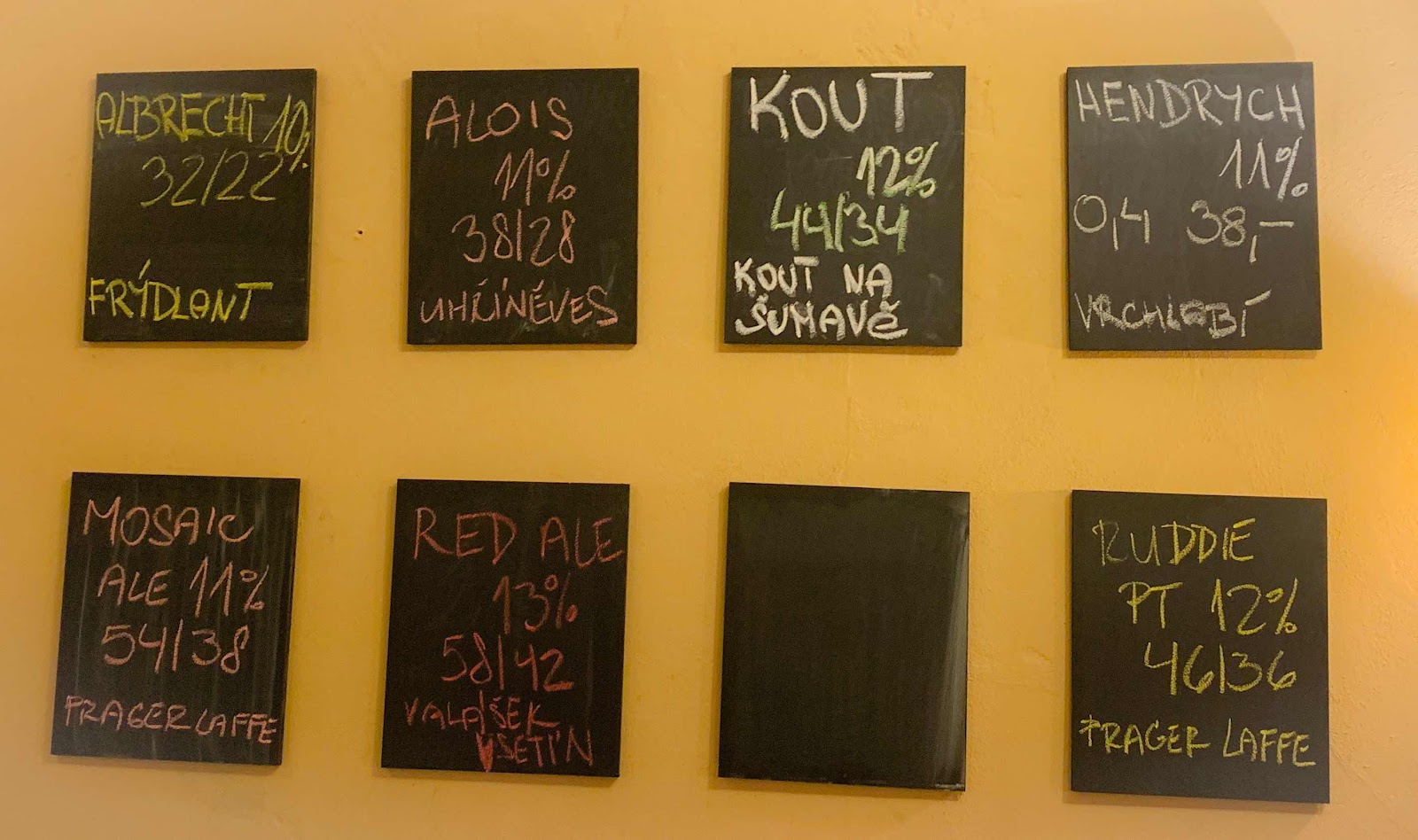 One will probably jump out at you. They are one of the few places in Central Prague that routinely have the Kout na Šumavě 12º. There are a few that carry the 10º but here is really the most reliable place for the 12º.
When I first had this beer over 10 years ago it blew me — and a lot of other people — away. About four years ago I thought the quality was way off. At first I thought it was maybe that the overall level of  Czech beers had increased with newer breweries like Uněticé and Hostomice. But two years ago I had a really bad one at the Heretic. I reached out to some friends who are more plugged in (i.e. they read Czech) and said the brewery was having problems, financial and managerial, but that things had improved recently.
So I ordered one and held my breath... 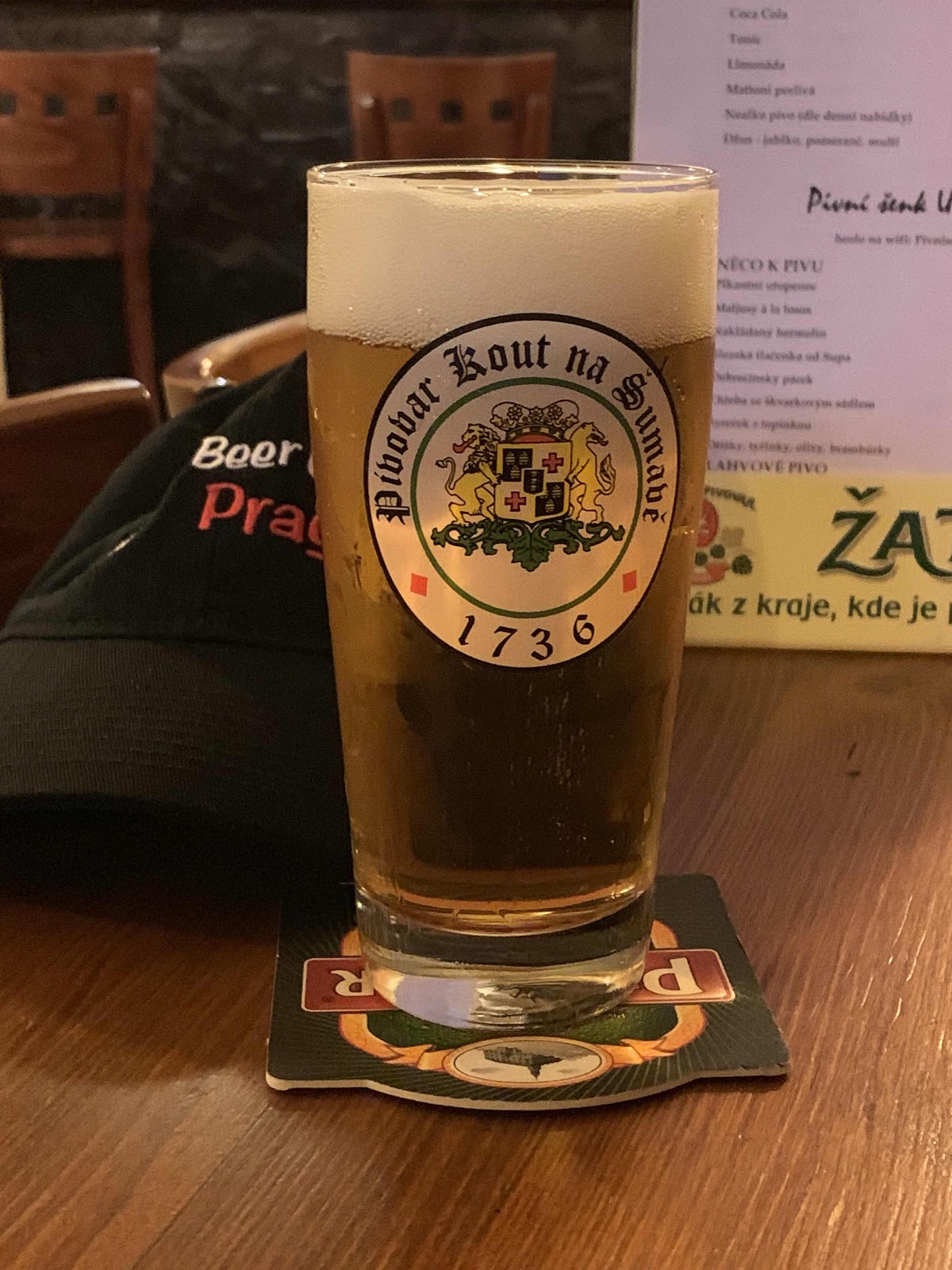 It was fine -- very good in fact. It didn’t blow me away like that first one ten years ago, but that is probably more on me. I’d say they’re back.
I got a text from a local friend saying he was at Pivovarský Klub and was headed to Dva Kohouti for one quick beer.  With the trams messed up there was no way I could get there in time on public transit, so I broke down and ordered an Uber.  Boy am I glad I don’t have to drive in Prague, especially in the rain during rush hour.
Soon I was back a Dva Kohuti and drinking a Matuška California. This is maybe my favorite Czech hoppy beer. “Only” an APA but it also somehow says to me that it is Czech. Yum. 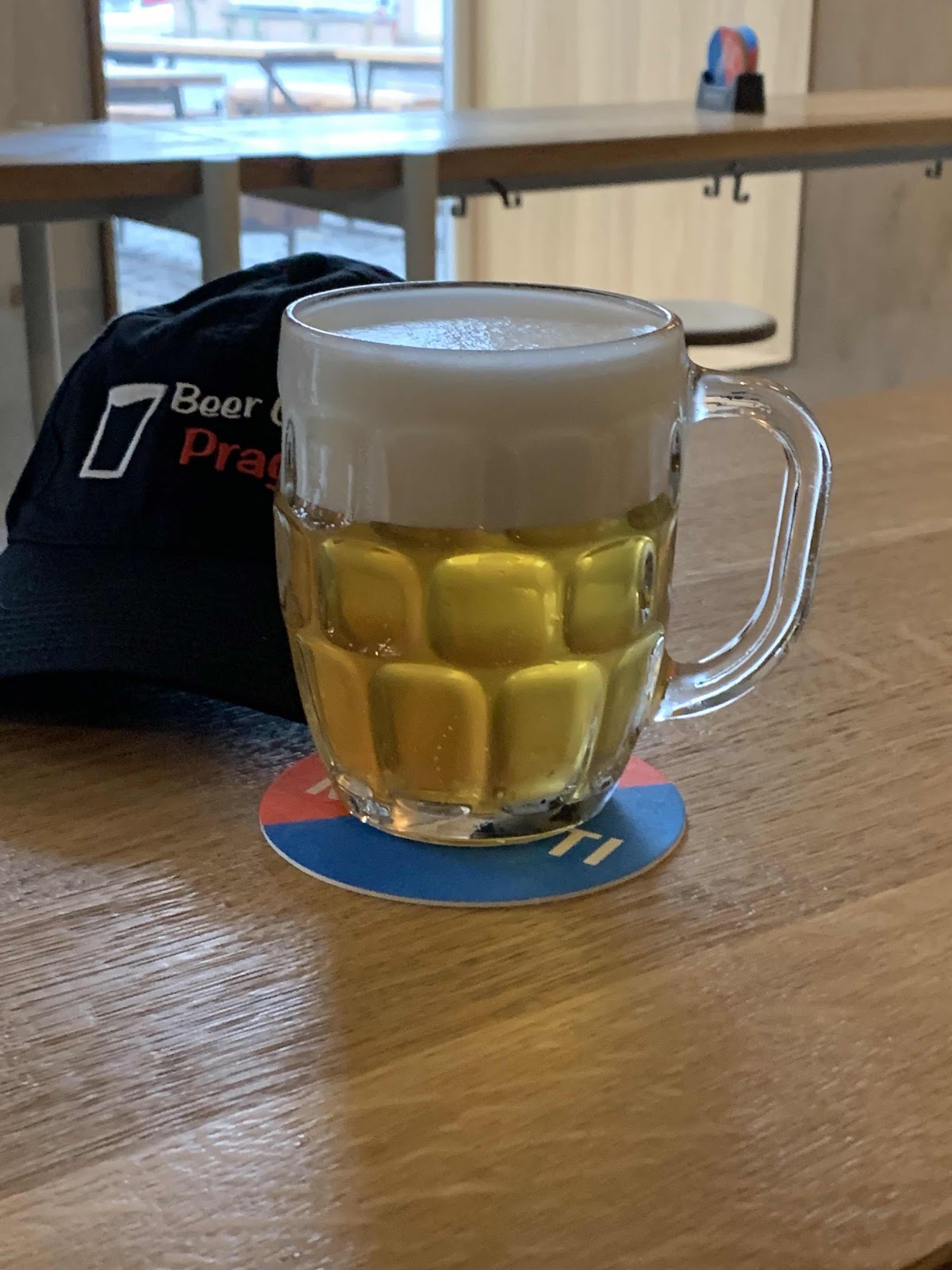 I meant to take a picture but forgot, but if you should go to Dva Kohouti take a look at the taps. The Czech side pull taps are amazing — they let you quickly pour a full half liter of beer and put a creamy head on top. The problem is they take up lots of horizontal space — you need 8 inches or so between each tap. That is a lot of space. At Dva Kohouti they have a prototype tap that emulates the action of the side pull with a tradition front to back motion. Coming soon a good bars everywhere.
There isn’t a direct tram from Dva Kohouti to my hotel. I have to change somewhere. If I do at stop Dlohá Třída I can make a short detour to here 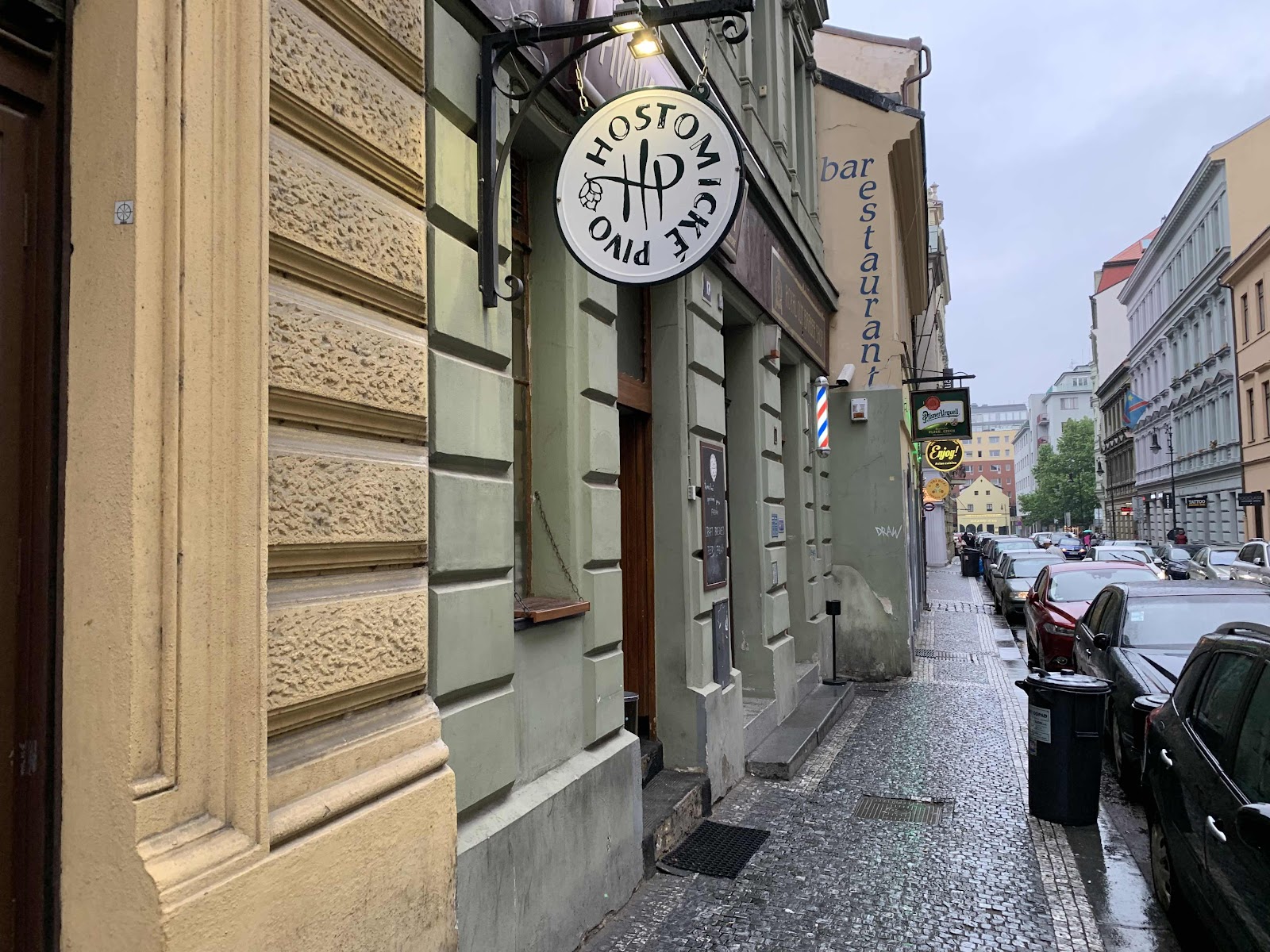 And have a couple of these marvelous beers, Hostomice 12º 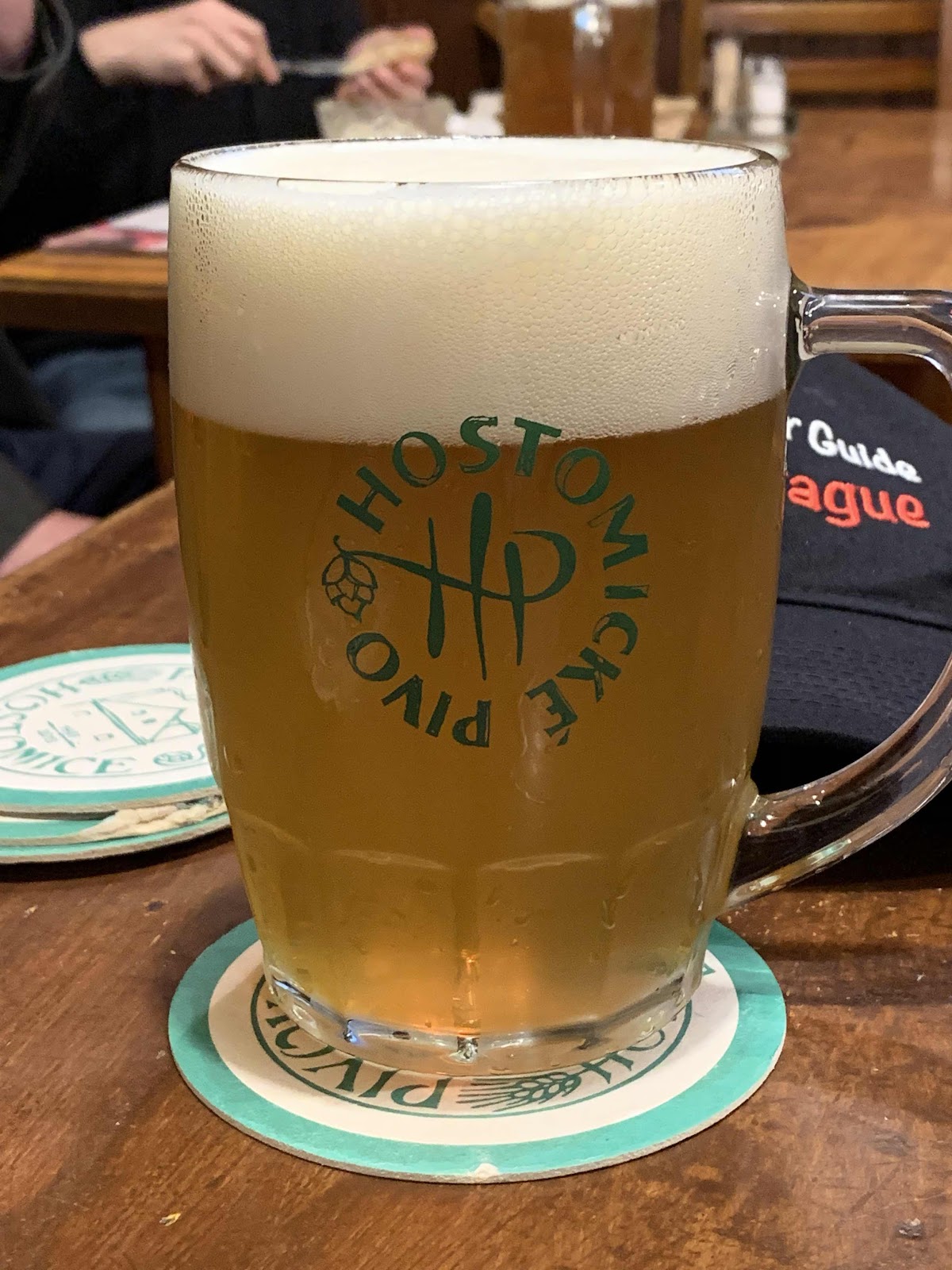 After a couple (well, a few if couple is exactly two) I went and got a meal and back to my hotel.
I’ll leave with another look at the taps at Nalévárn 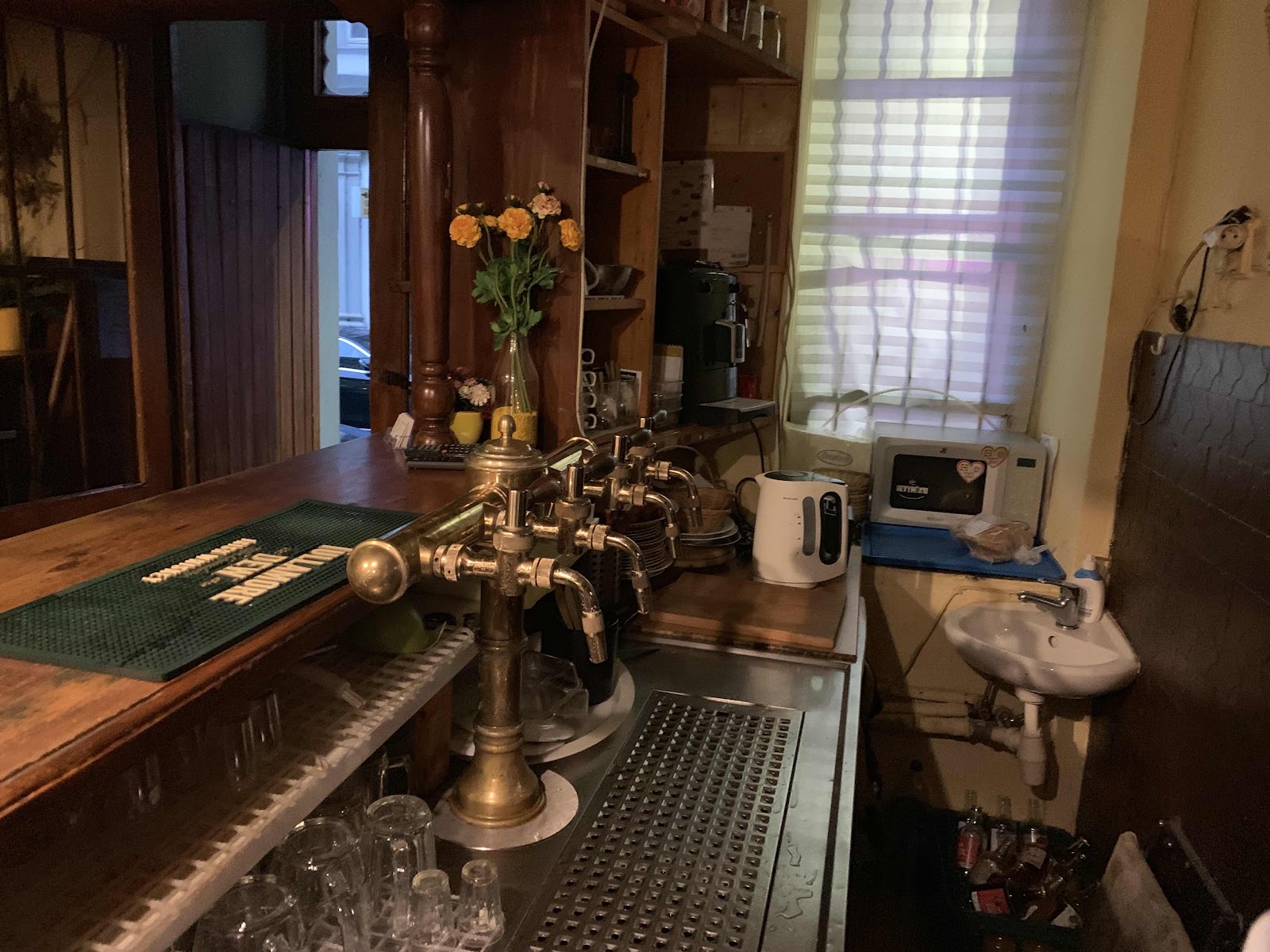