Here we go again...
The goal today was to visit some new places in Žižkov.
On the way I hopped off the tram to check out Bullerbyn, a cocktail bar with Herold beers. 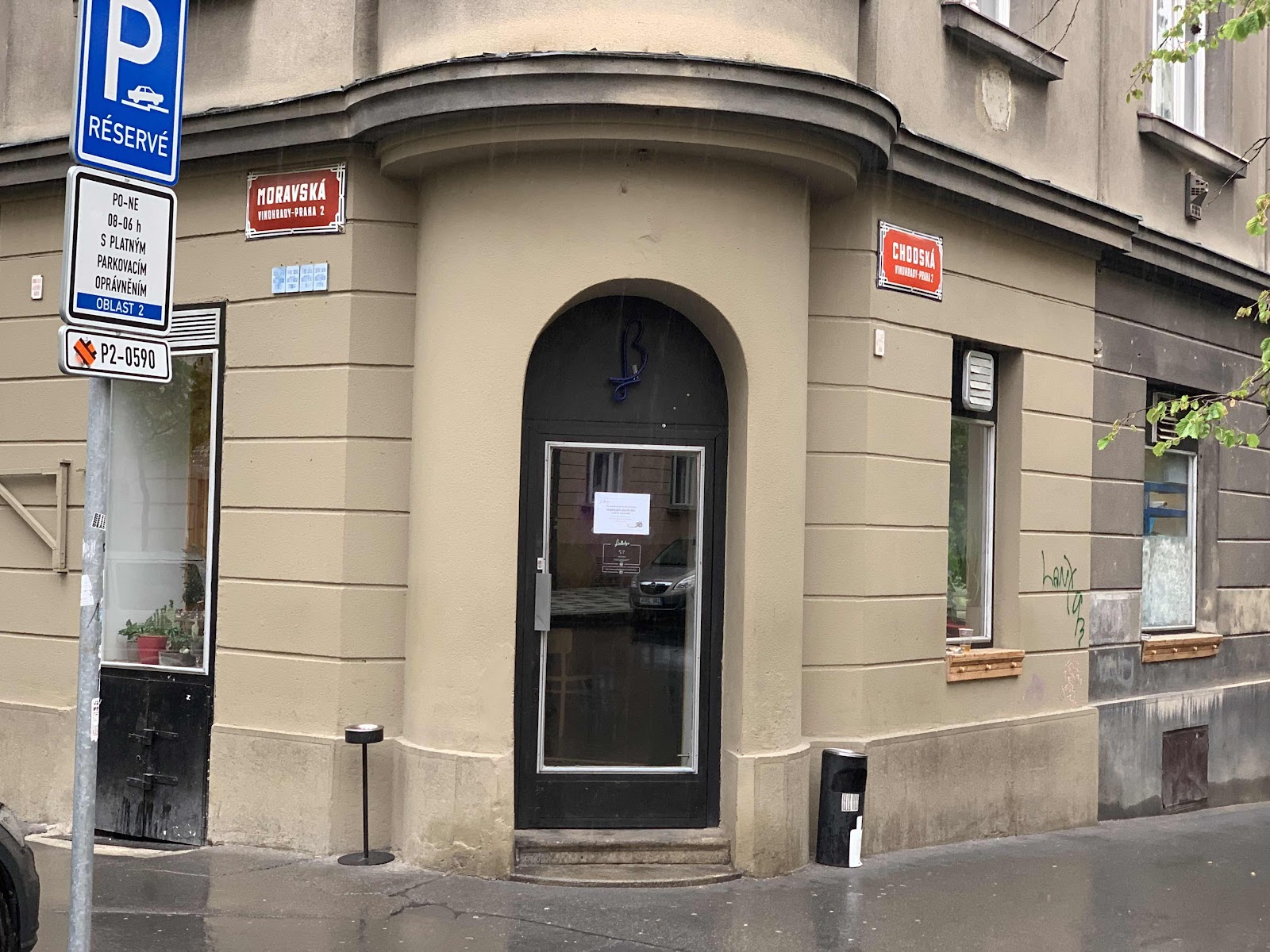 It’s not well marked on the outside but there is a stylized “B” above the door.
I ordered the Nefintrovany 12º 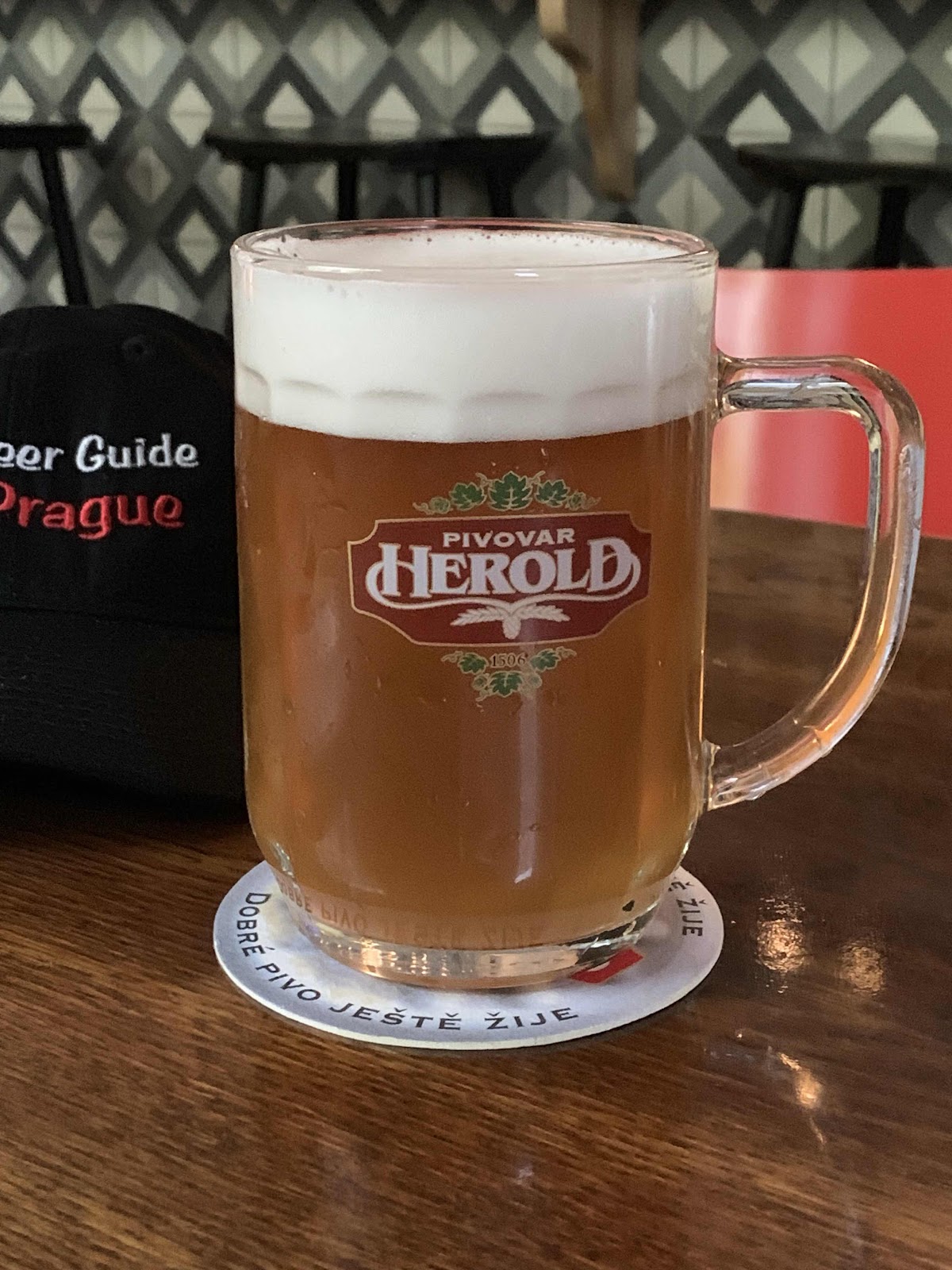 I’ve found Herold to be imminently drinkable, though not a favorite. They open at 11am so worrying stopping in for an early beer if you are in the area.
It really is more of a cocktail bar/cafe  rather than a beer pub. 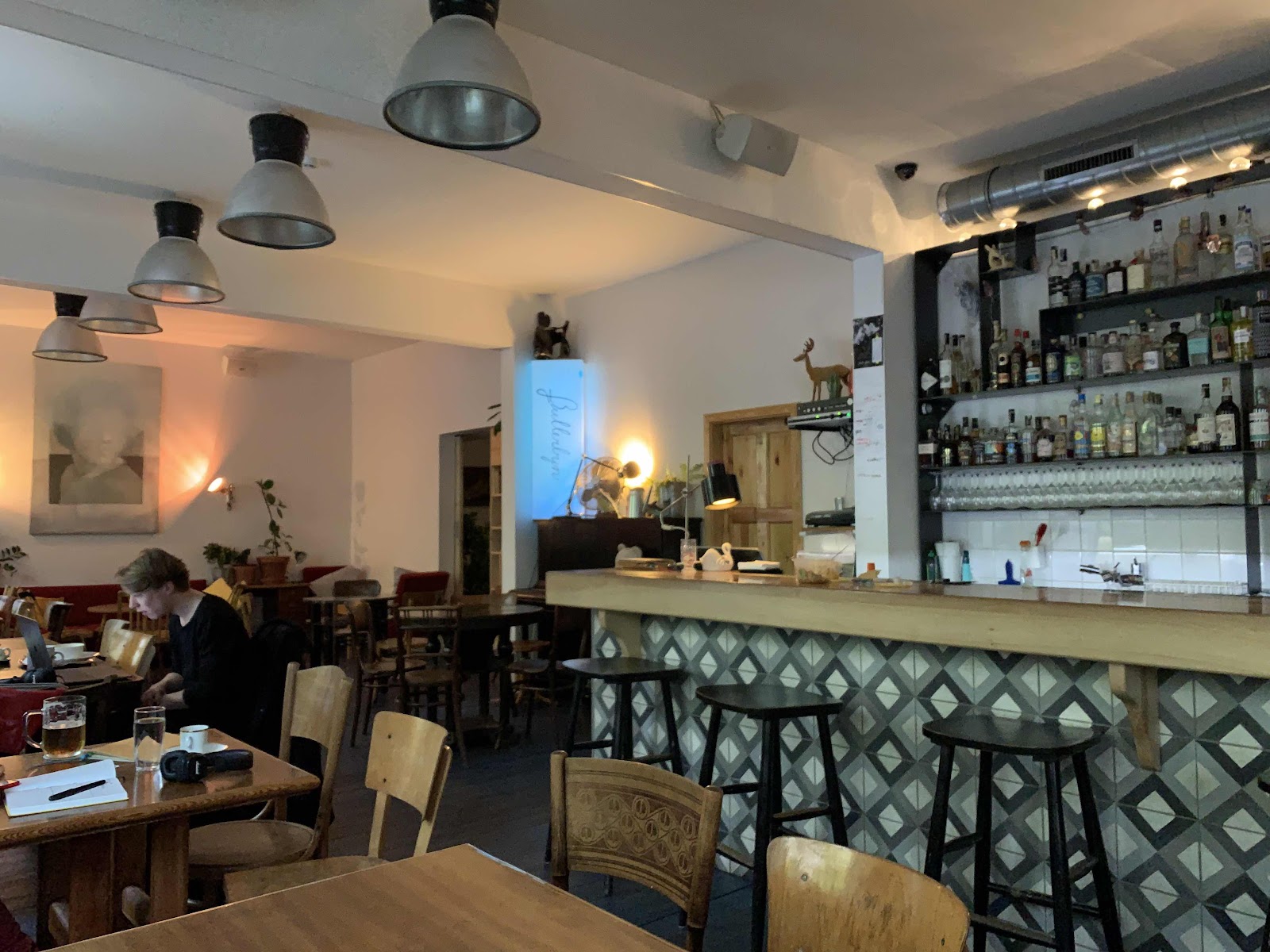 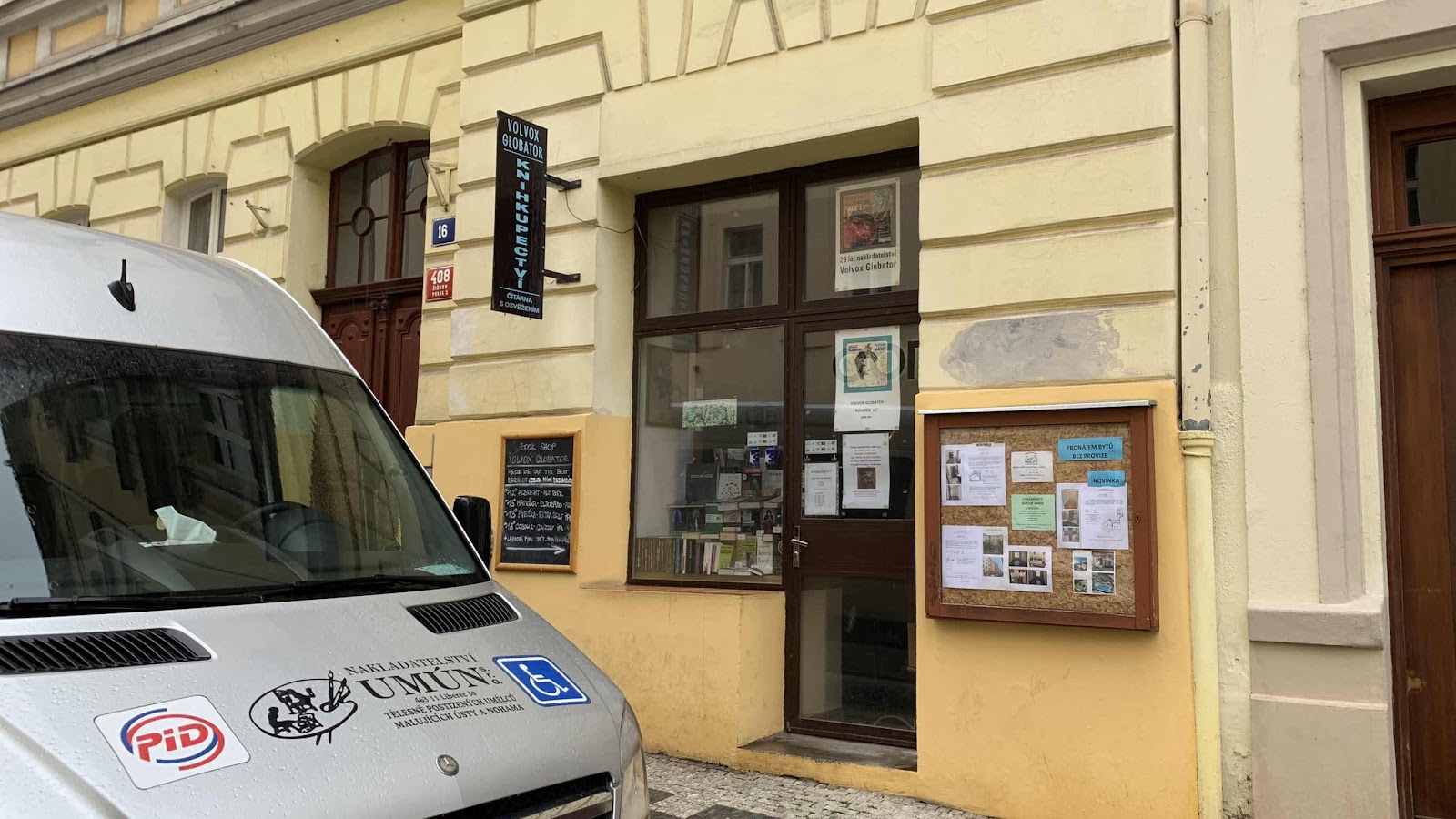 What is that, you ask. Why it is a book store with a small pub inside.  Heads up Barnes & Noble — if you really want to compete with Amazon start putting in some beer taps. 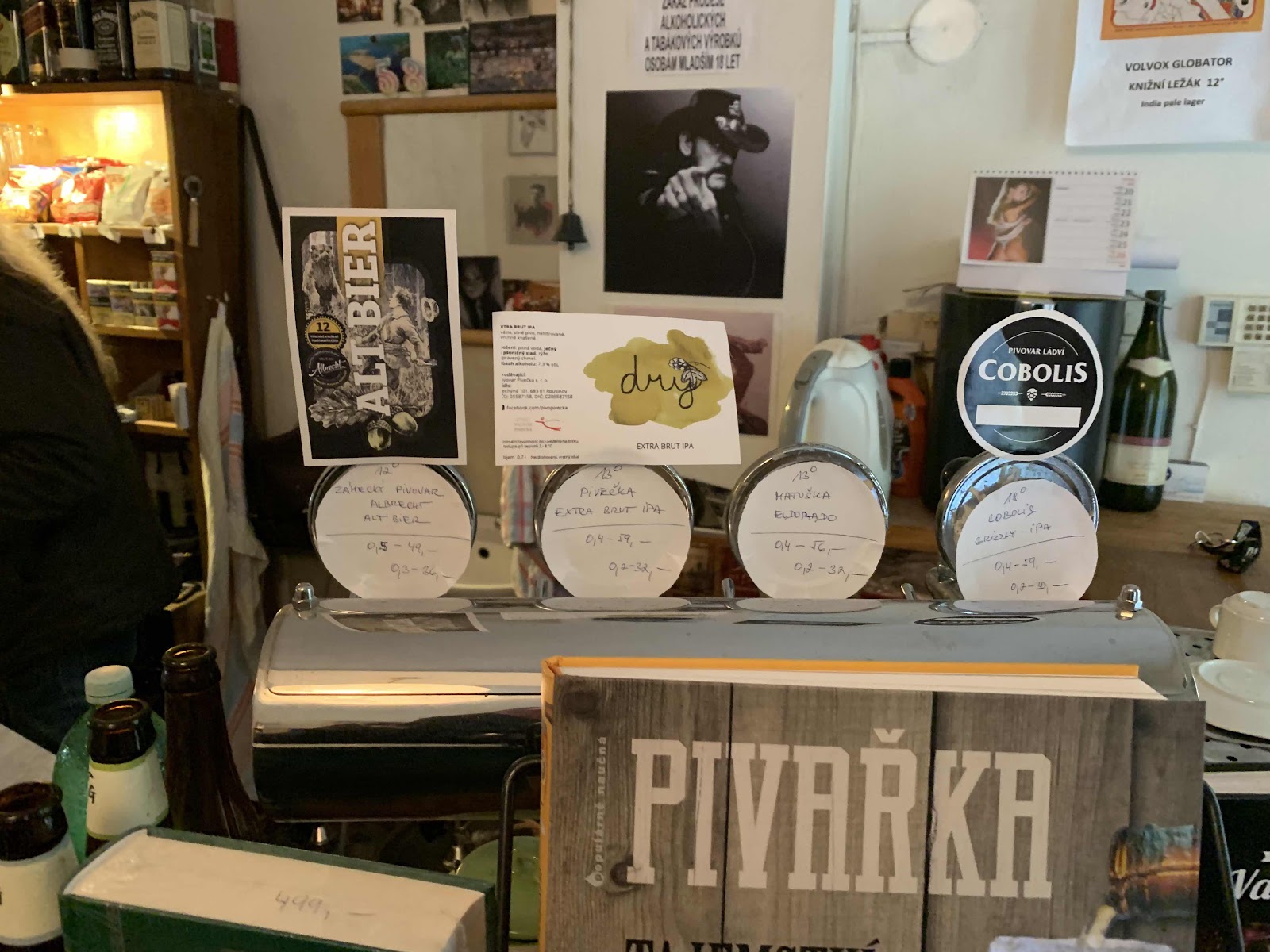 The bar itself is up a half flight of stairs. It is not very large, a couple of tables is about it. There were four beers on tap, I went with the Albrecht Alt Bier. 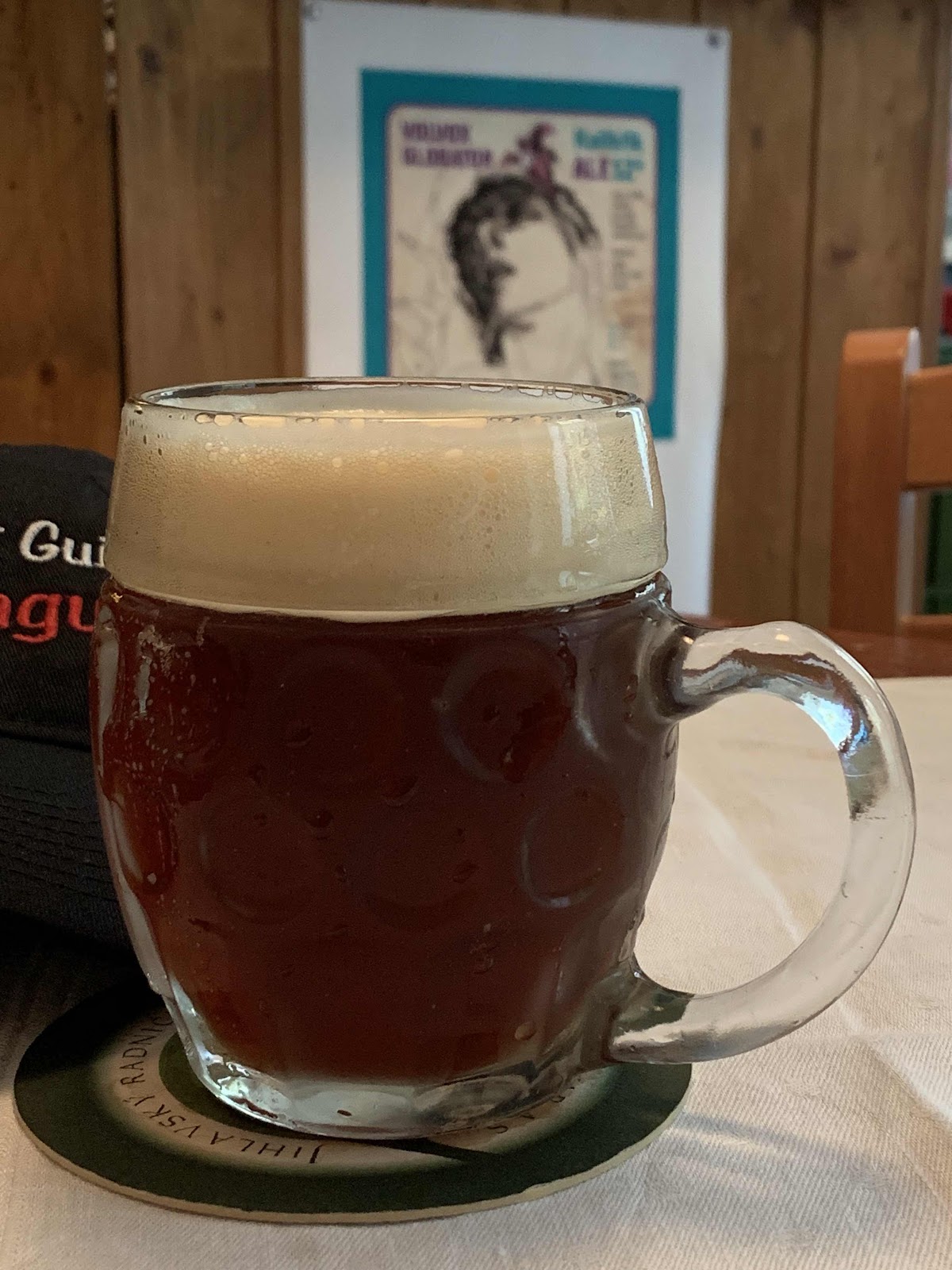 It was a tasty amber beer but I would really call it an Alt Bier, at least no in the Düsseldorf style. But as I’ve found all of the Albrecht beers I’ve had this trip, it was a nice, drinkable beer.
Just about around the corner is Pivoteka ŽižkOff, a bottle shop that has four taps for onsite drinking. When I was in Prague last year it was “Closed for renovations” but it had an air about it that it might be a permanent closure. I gather it was a six month project and the re-opened last fall. 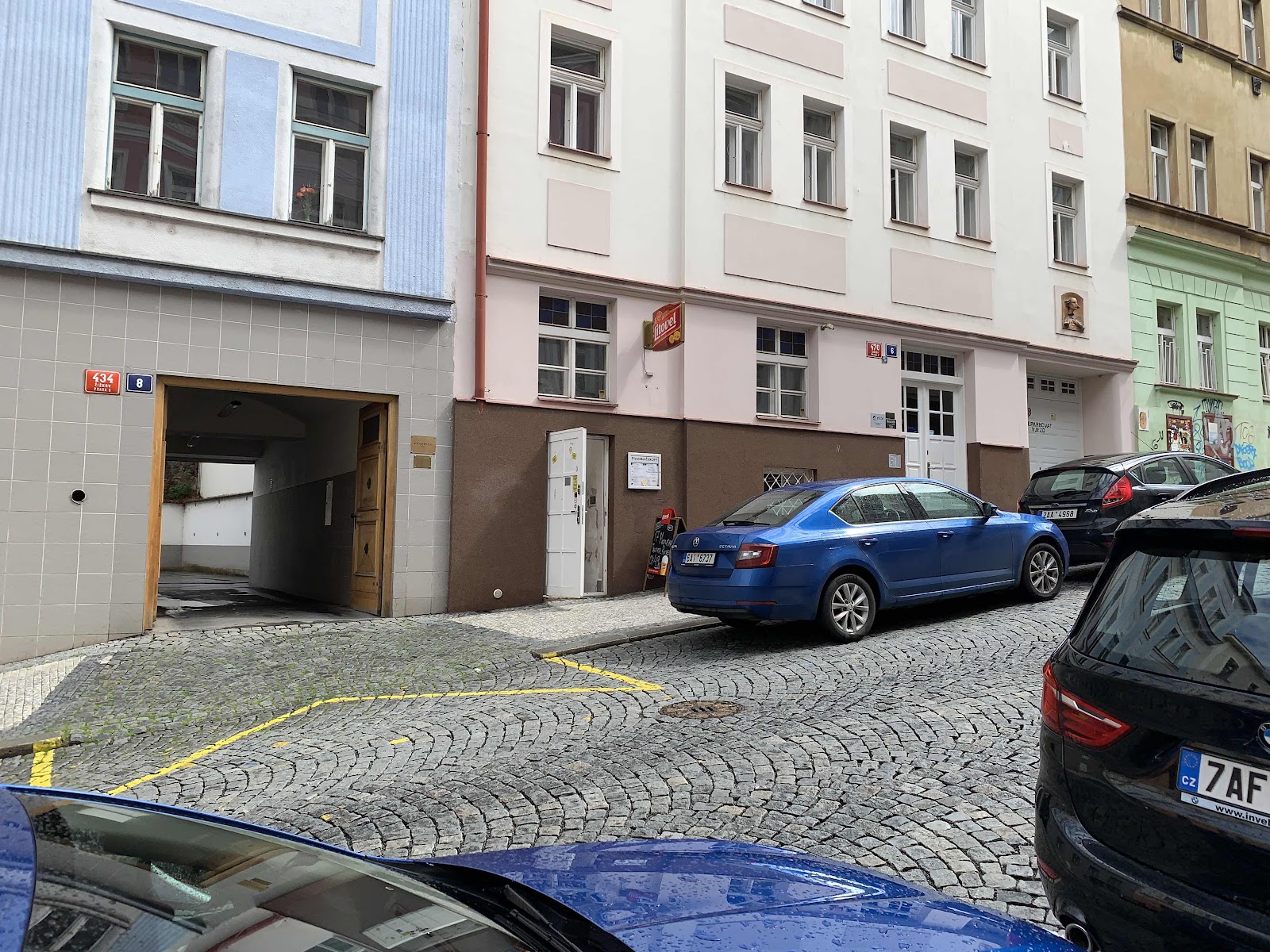 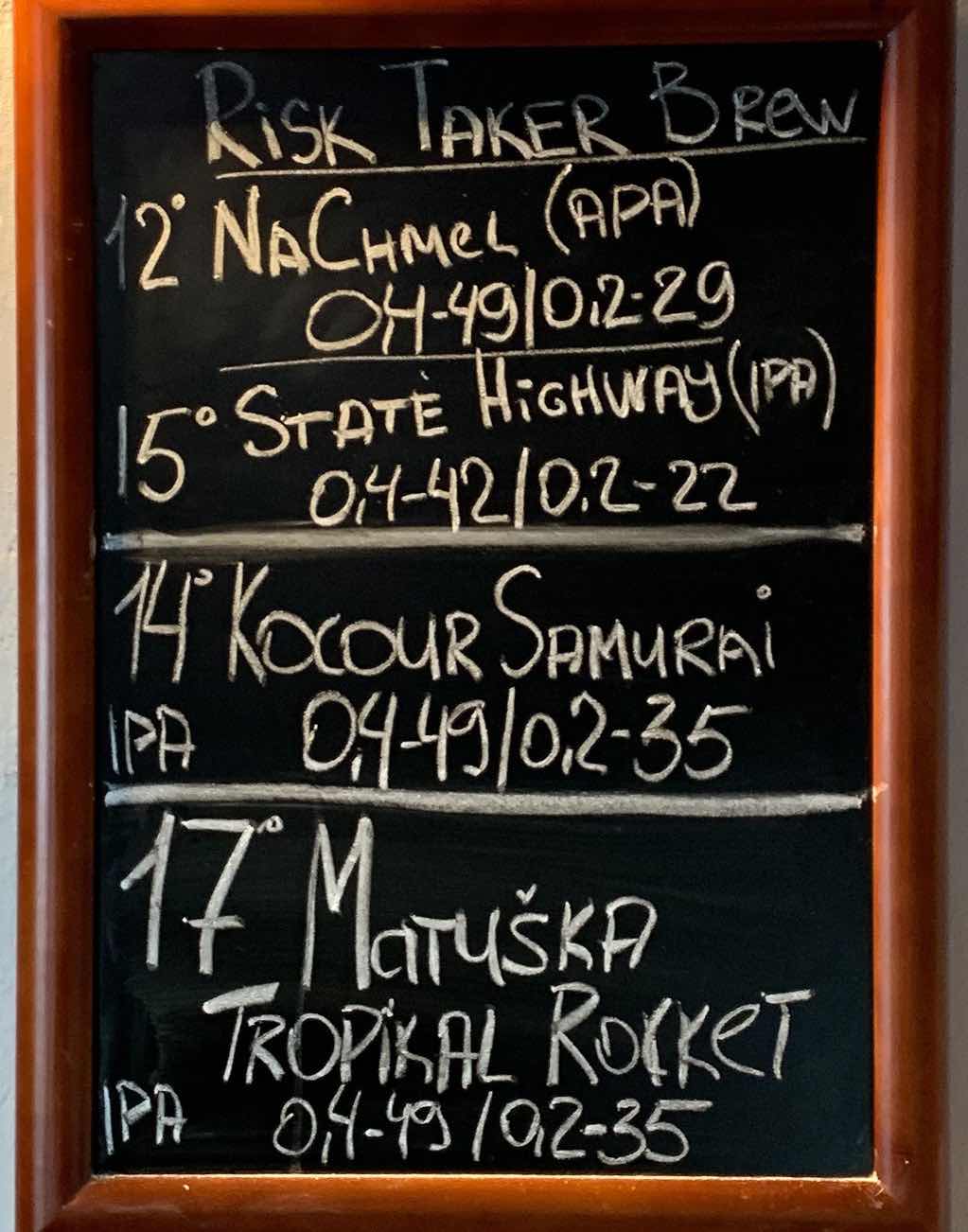 I decided on the Kocour Samurai 14º an IPA that I’ve had in the past but not recently. 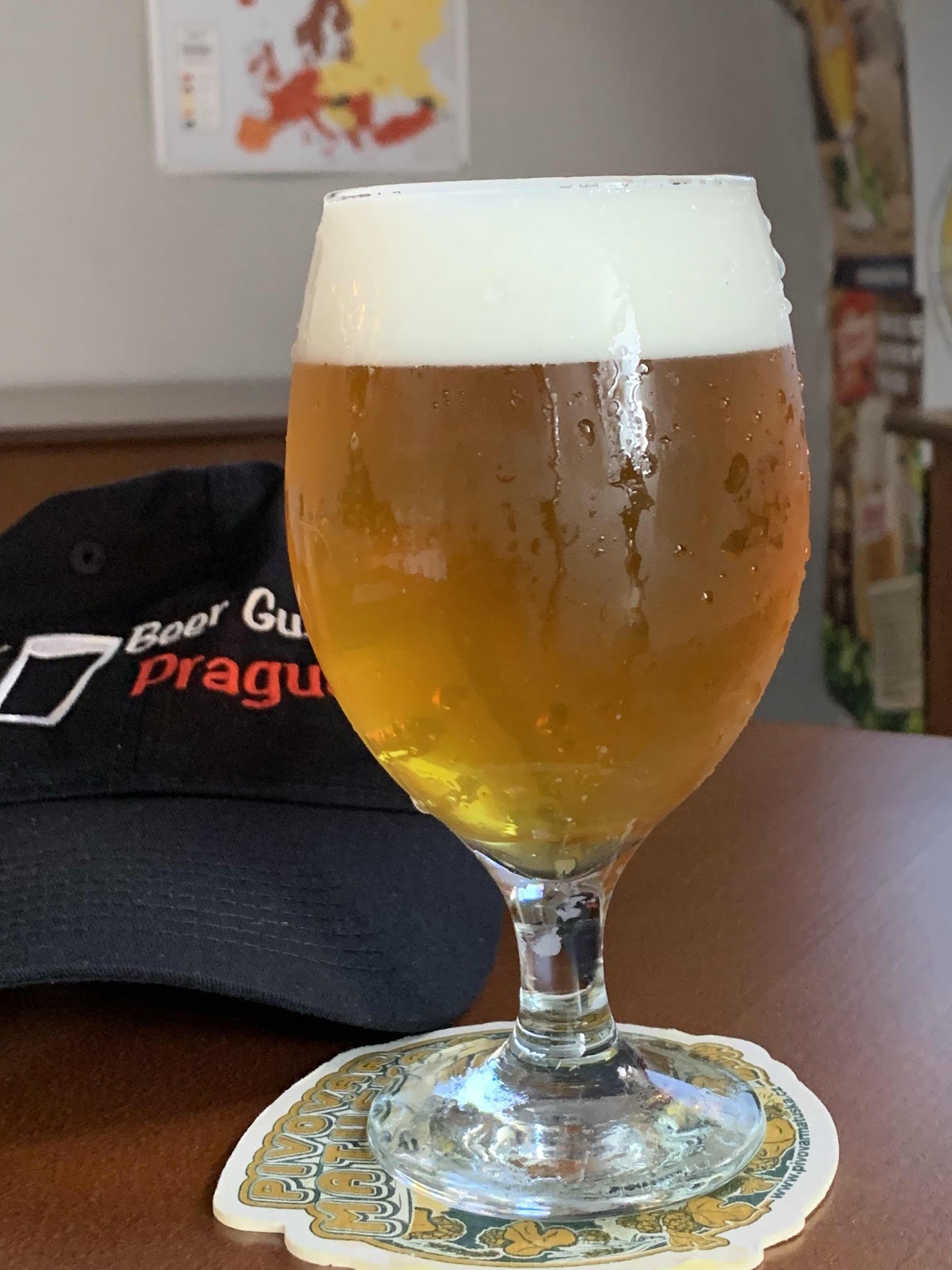 It is a nice IPA, sharp bitterness up front and some nice malt behind it and fairly clean in the finish.
Up and downs some hills, the Restaurace Žižkov Na Žižkově — a bit of a play on words. In the Moravian region of Czechia there is a brewery Pivovar Žižkov. This restaurant is sort of their tap room in Prague. 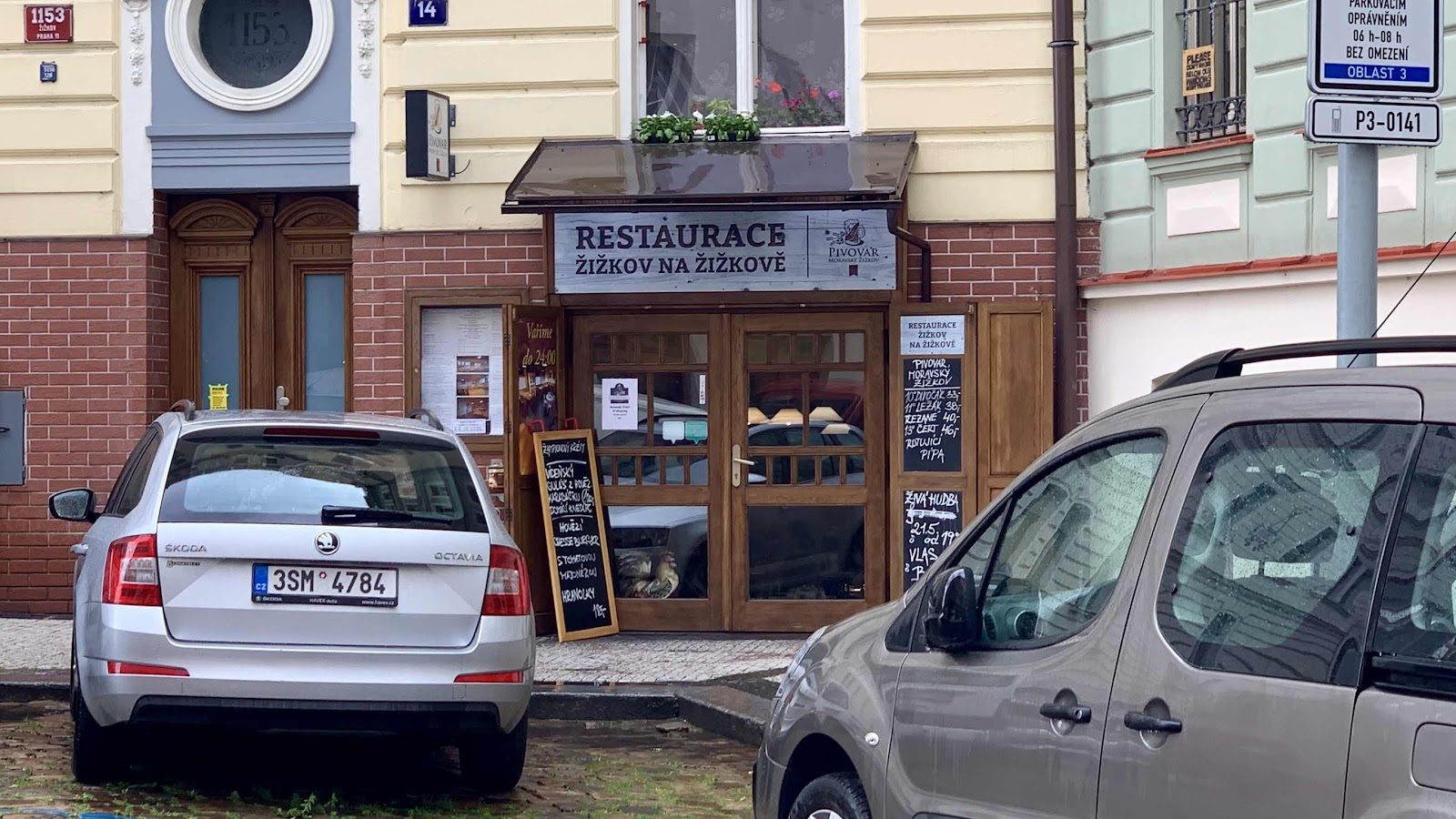 The had five beers on tap.  As is my pattern, I had the Divočák 10% 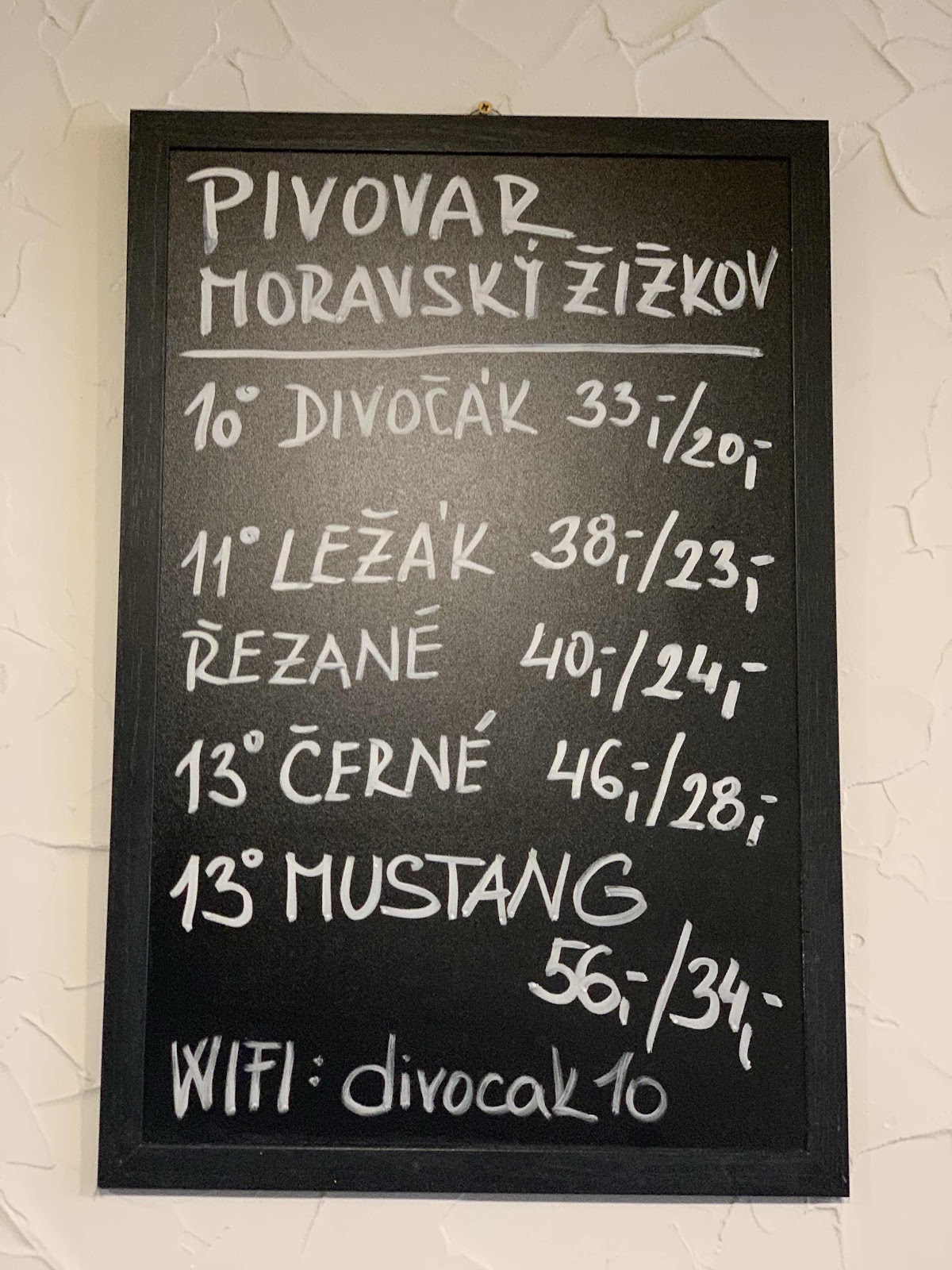 A very nice beer, clean and refreshing.  The menu looked interesting and the food smelled good. I will definitely try to come for a meal on my next trip. 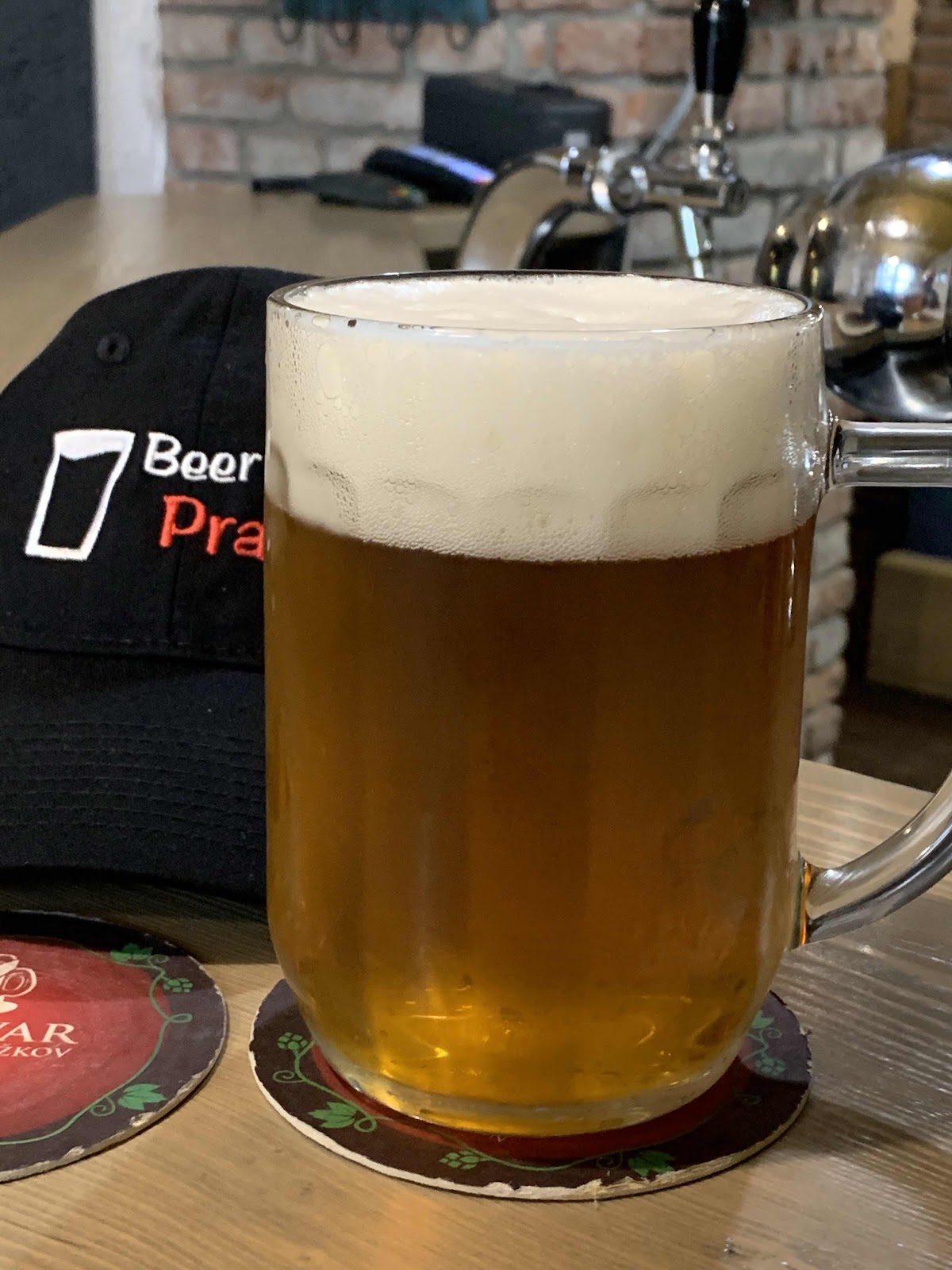 I decided it was time to visit an old favorite, Bar Na Palme, near the Palmovka Metro and tram station. They moved to this location a couple of years ago, originally being on the other side of the station. The new location is in the basement and is much larger but the old one had a nice patio and wasn’t in such a dodgy looking building.
You go thru the entranceway and the stairs down to the pub are on the right. They do have a few tables in the courtyard but there is no table service so you have to go downstairs to get your beer. 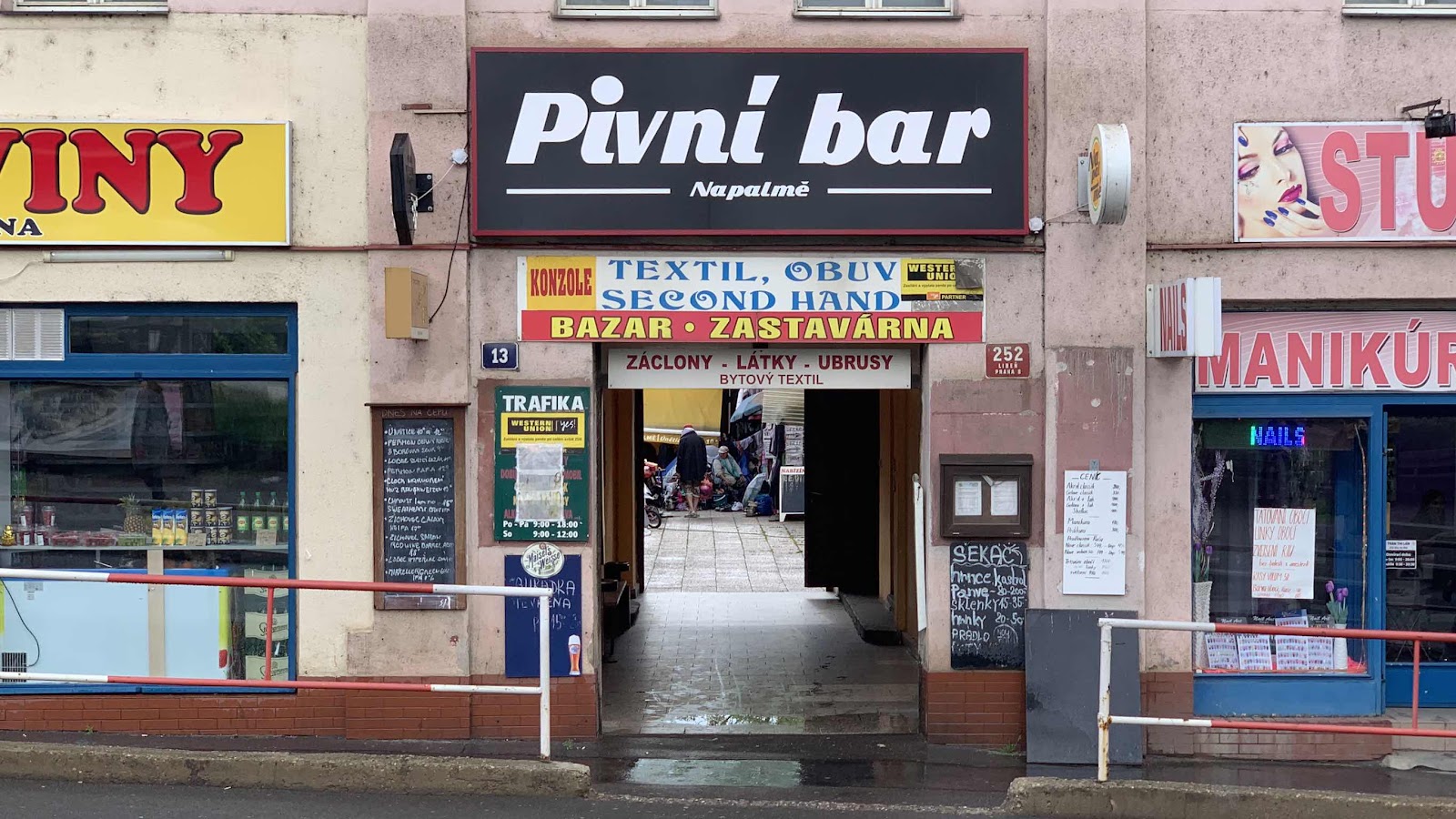 They have seven rotation taps, always something interesting on. They also have two fixed taps for Uněticé 10º and 12º plus a cider tap. 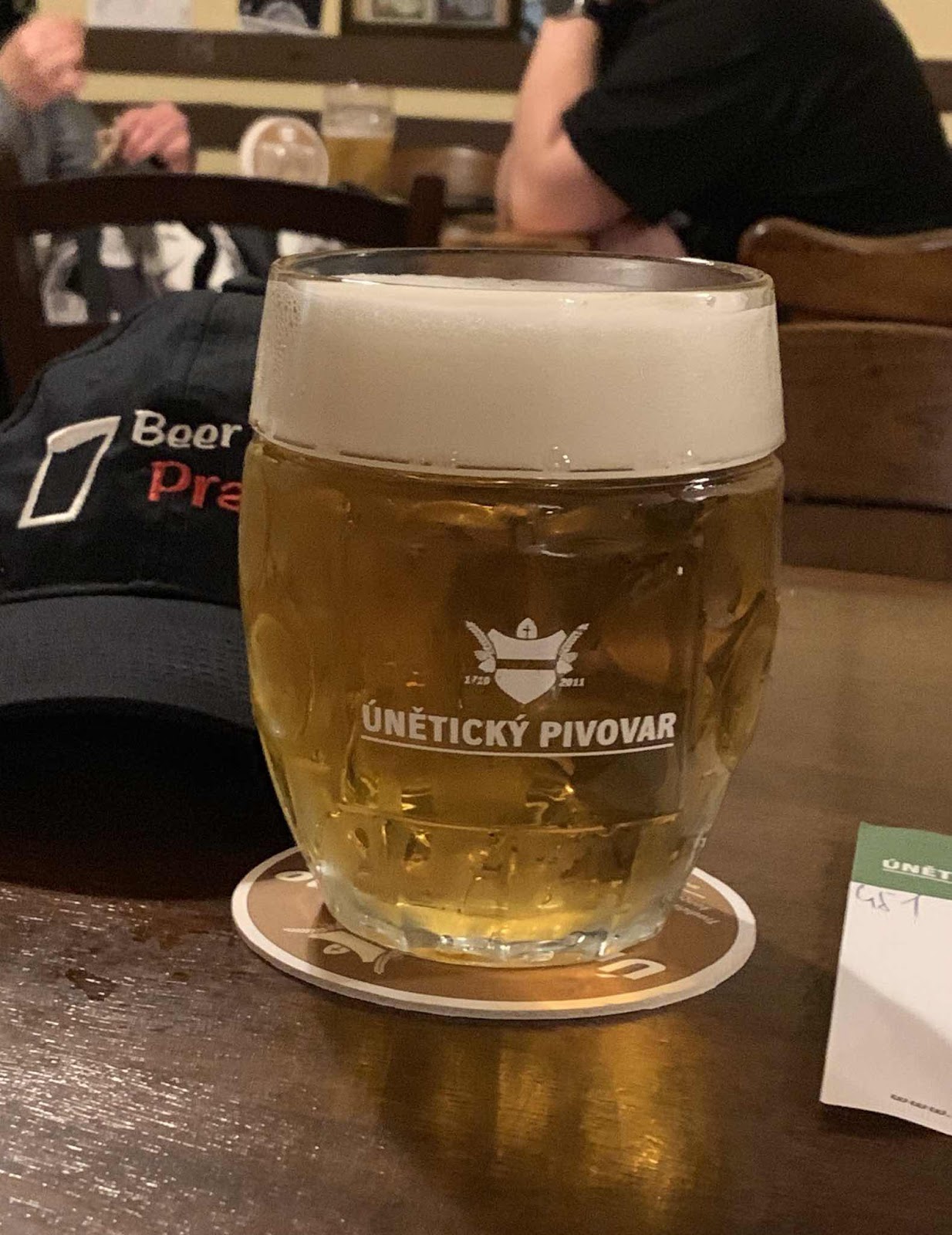 They do the tab the old fashioned way — that little slip of paper on the right is my tab, As I order beer (or food) they will add it to the slip.
For food options there are just the usual Czech bar snacks but they do have a spicy sausage that hit the spot. Two kinds of mustard, horseradish and bread. 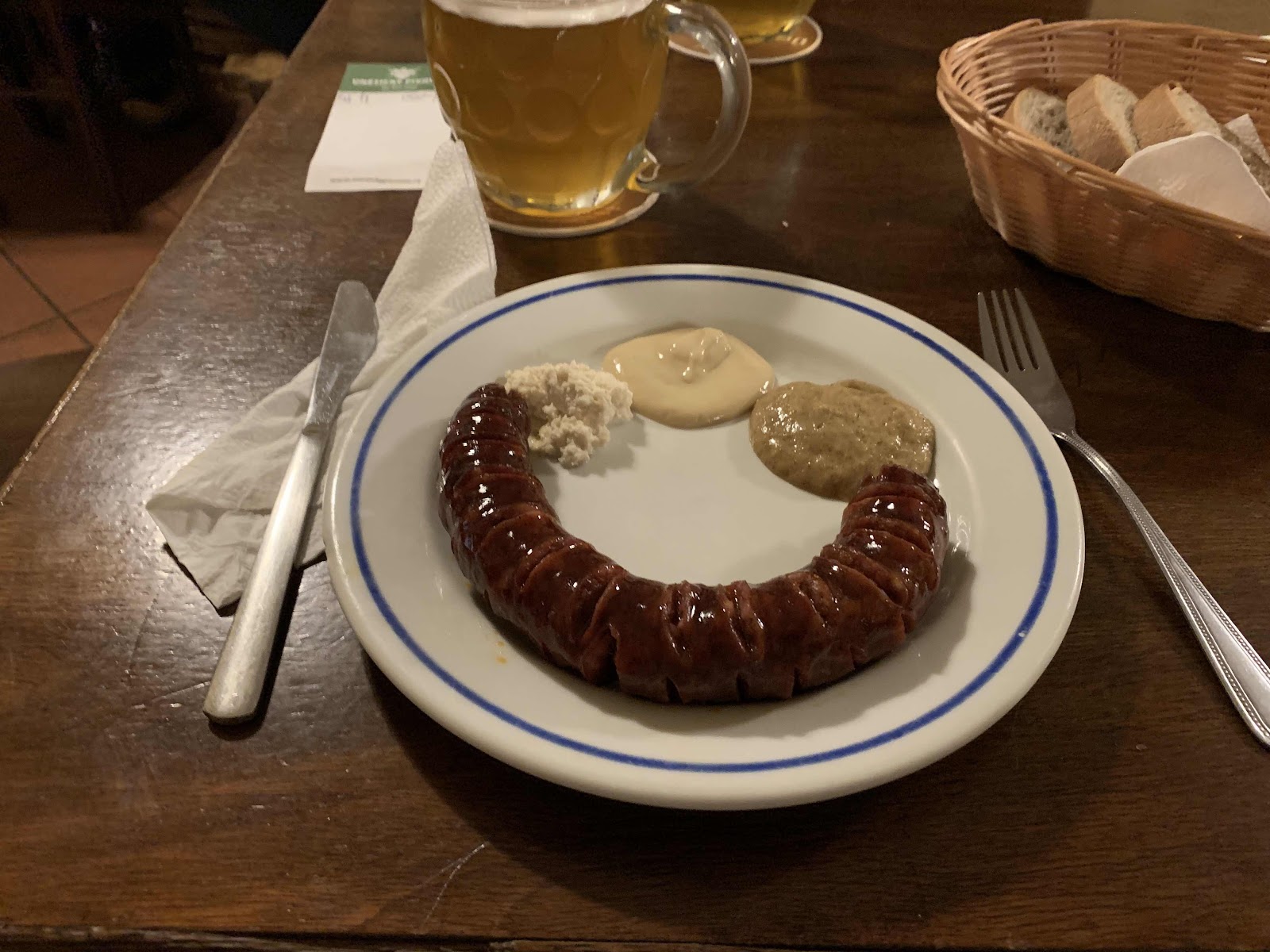 On the way to the Gents is a mural that I just laugh every time I see it. It is exactly they way I feel when enjoying a beer and I get an email from a client with a problem. 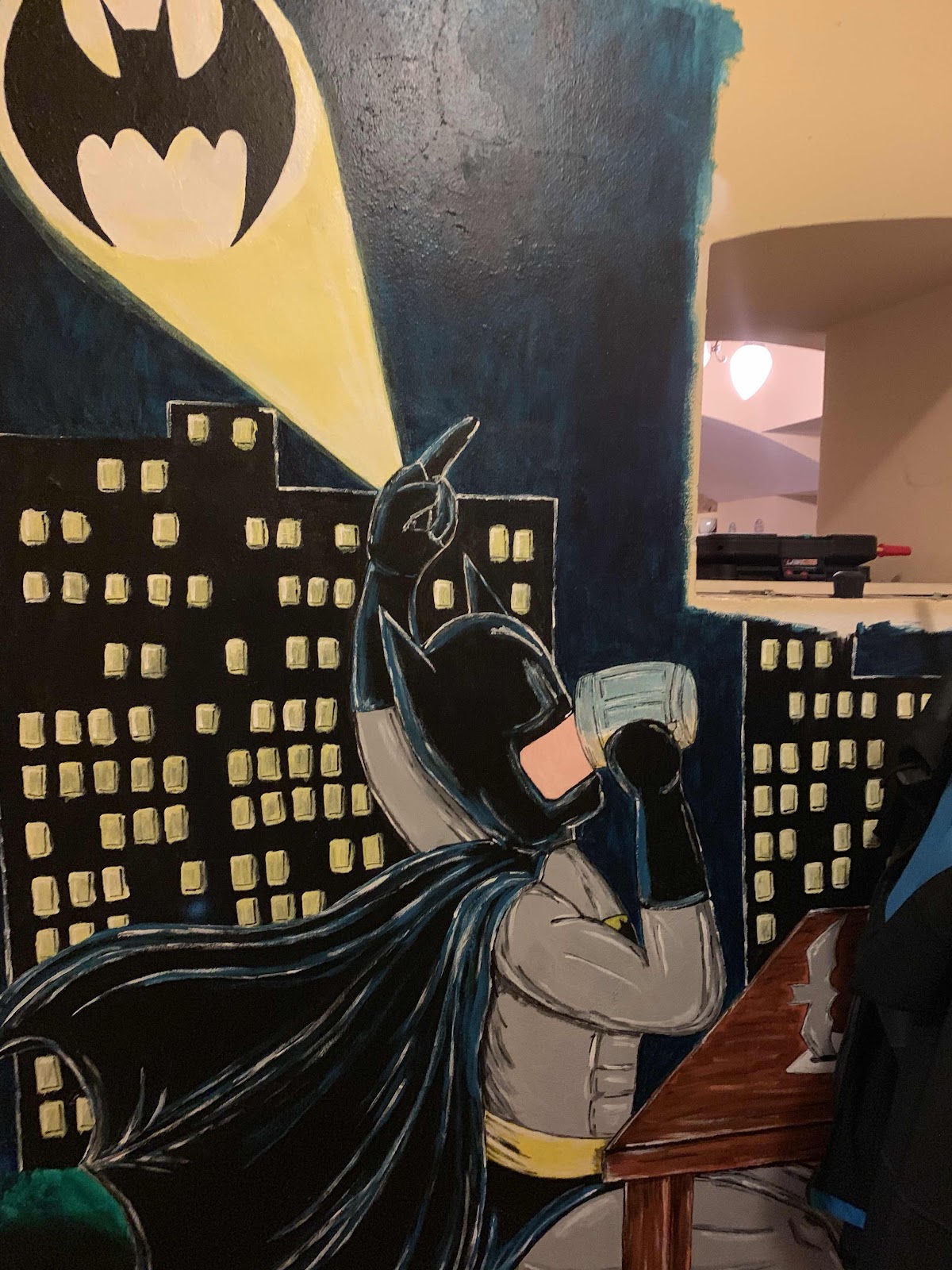 After a few more marks on my tap, I decided to head for the hotel. I wanted to make one stop along the way, Pivo Karlín, a new brewpub in the nearby Karlín district.
It is in a new business development right up to be base of the Žižkov mountain (which separates Karlín and Žižkov) 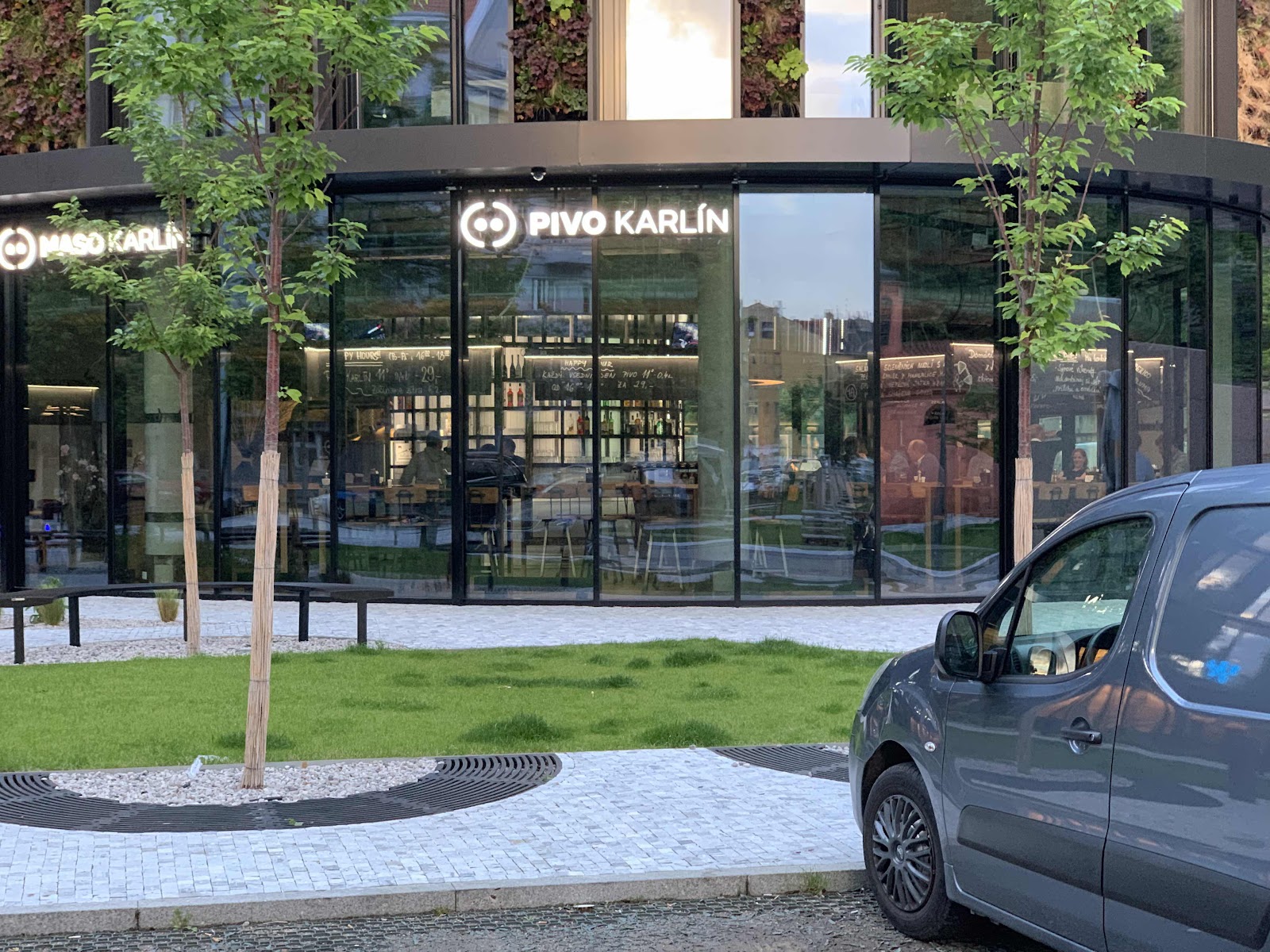 They had seven of their own beers on tap.

Went with the Karlín 11º 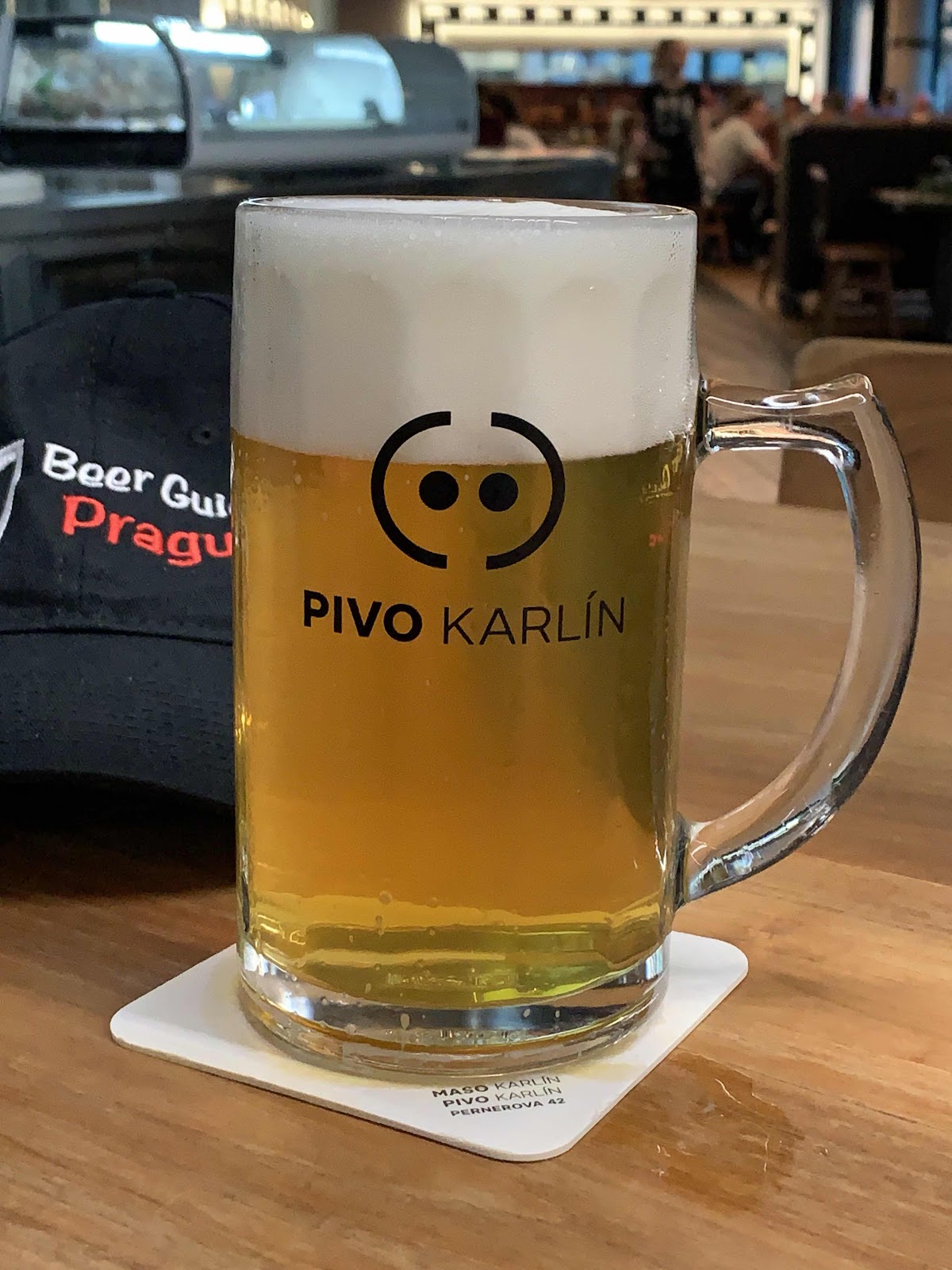 They serve their beers in .4L measures, which seems to be a trend in the newer brewpubs/tap rooms. I know people who won’t go to such places because they usually don’t make it clear up front so it seems like you are getting scammed. But the beer was fine, not terribly exciting but well made and drinkable.
It is very much an industrial chic vibe and you can see some fermenters from pub. 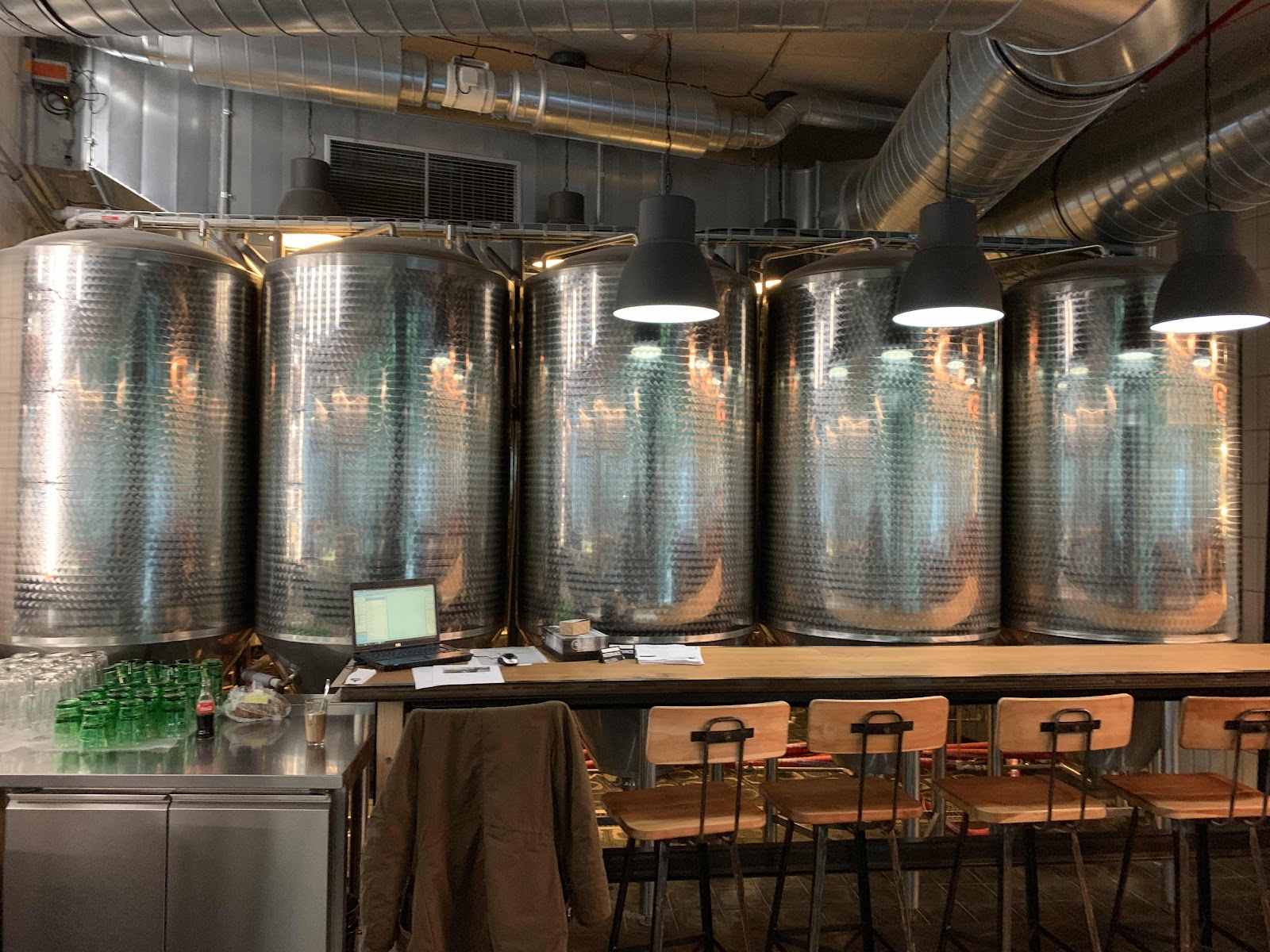 The rest of the brewery is visible if you walk around the other side of the pub.