Sunday, a day of rest? Not when there is beer to drunk. But it was a less hectic day than some.
So I headed off to the district of Wedding to visit Vagabund Brauerei  a small brewpub founded by exPat Americans.  On the way there I saw a sign for business that was worth a picture... 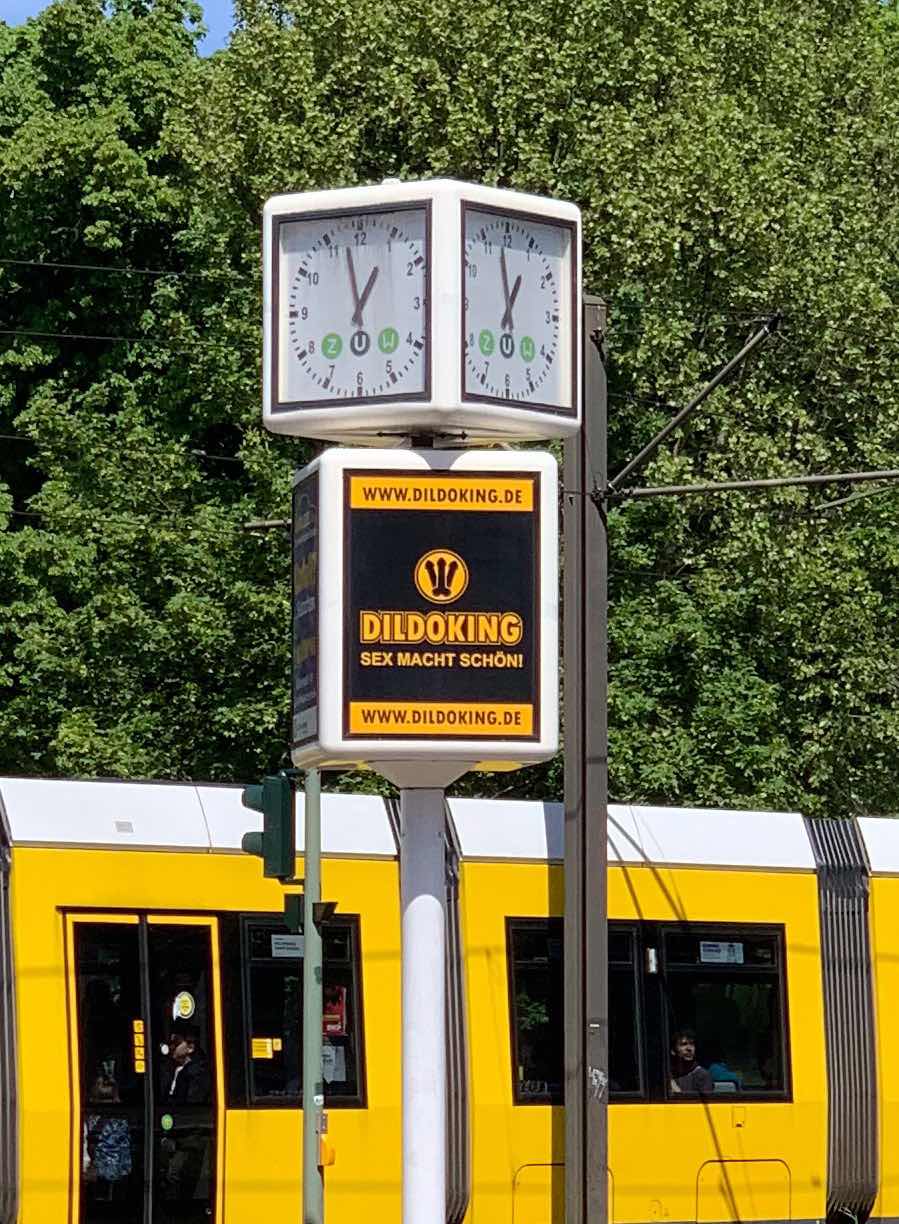 When I first saw such a sign 3-4 years ago from a distance I only saw the words. German has lots of compound words — when they need a new one they just stick 2 (or 3 or sometimes more) together. Sometimes that makes for patterns that are humorous for English speakers.  And “-ing” is a common word ending in German, so I figured this was the case. Then I got close enough to see the logo. OK.
Anyway, I soon was at Vagabund on a quiet, mostly residential street. 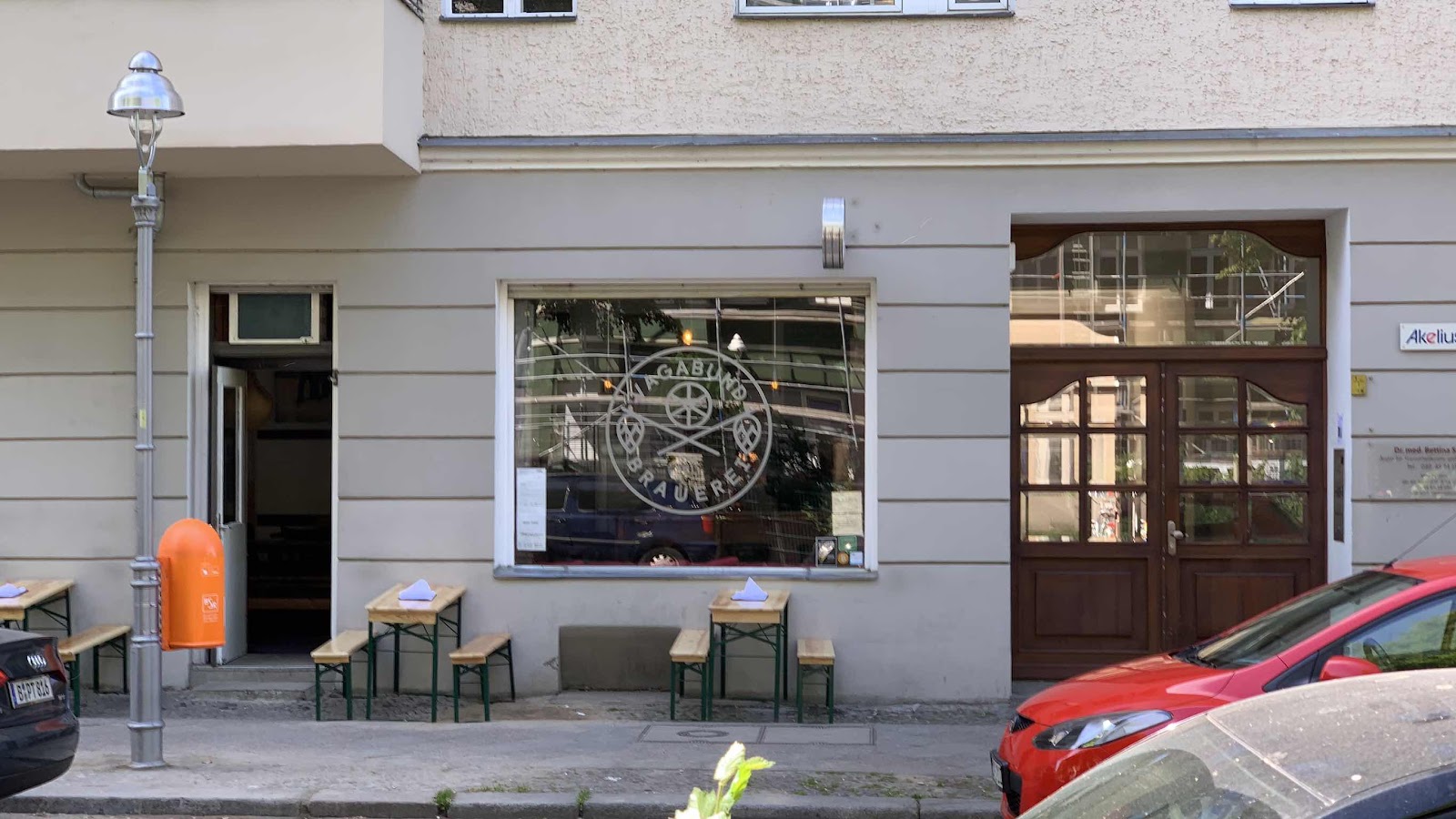 The inside is fairly small and the outside tables have a curfew because it is a residential area so it can be quiet crowded. But at 1pm on a Sunday I was the only customer. 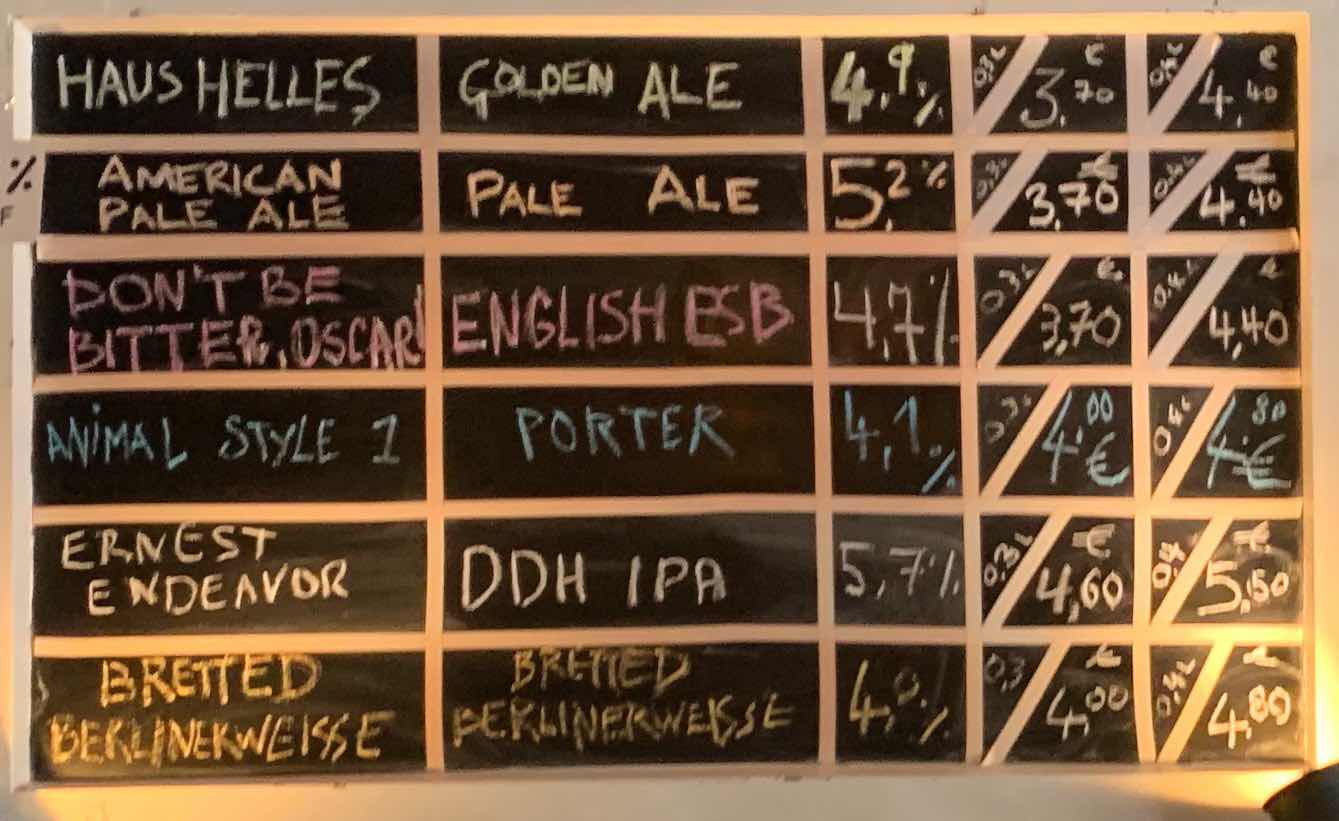 The Animal Style 1 Porter was the result of their first experiment with partigyle brewing, a technique where you can get multiple beers from one mash. I like porters so I though I’d try it. 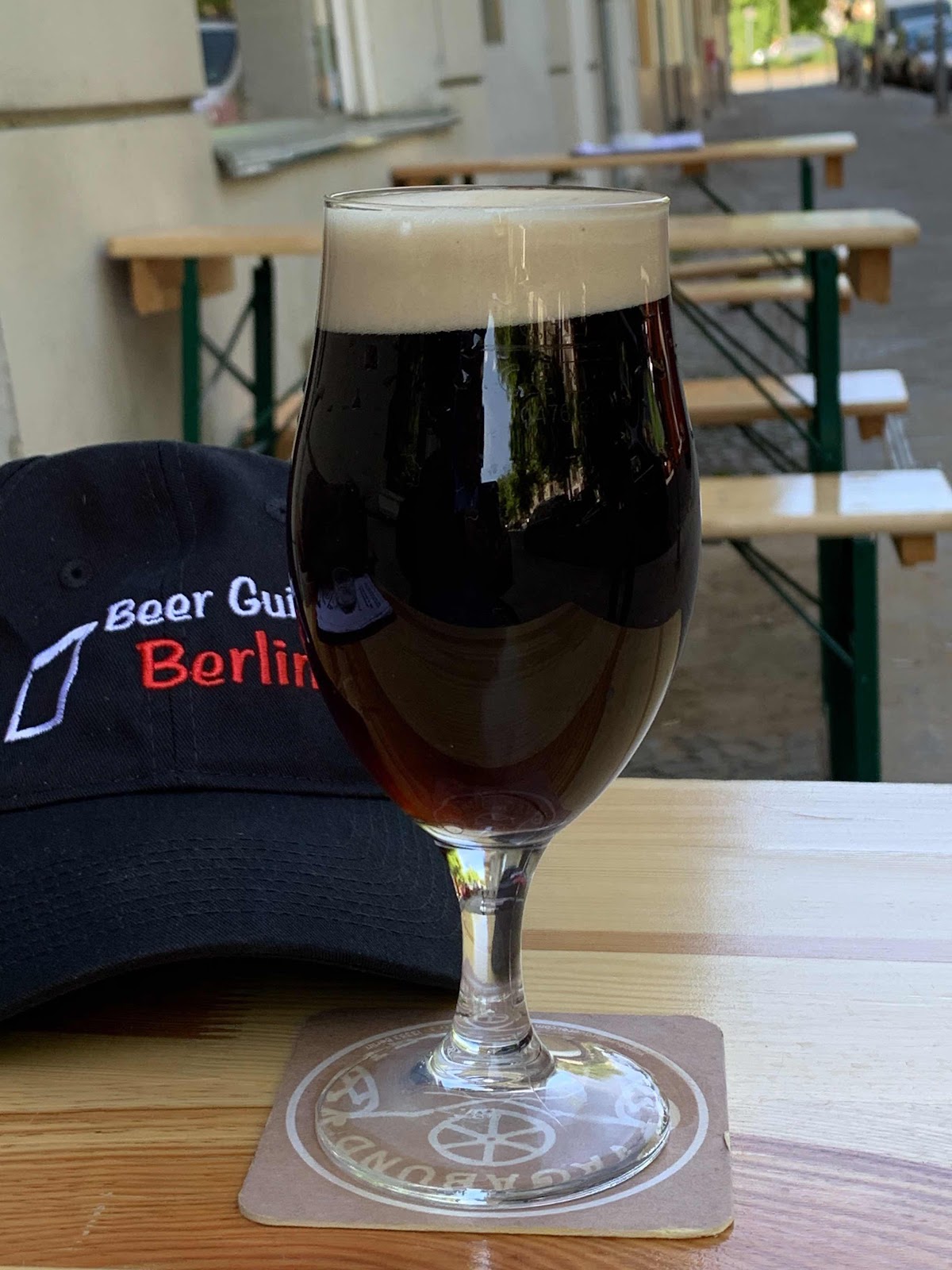 The tables outside are on an angle so it makes for interesting photography. It was a very nice brown porter, a good start to the day.
I decide to try the American Pale Ale next. Higher in alcohol and happier a fairly classic APA. 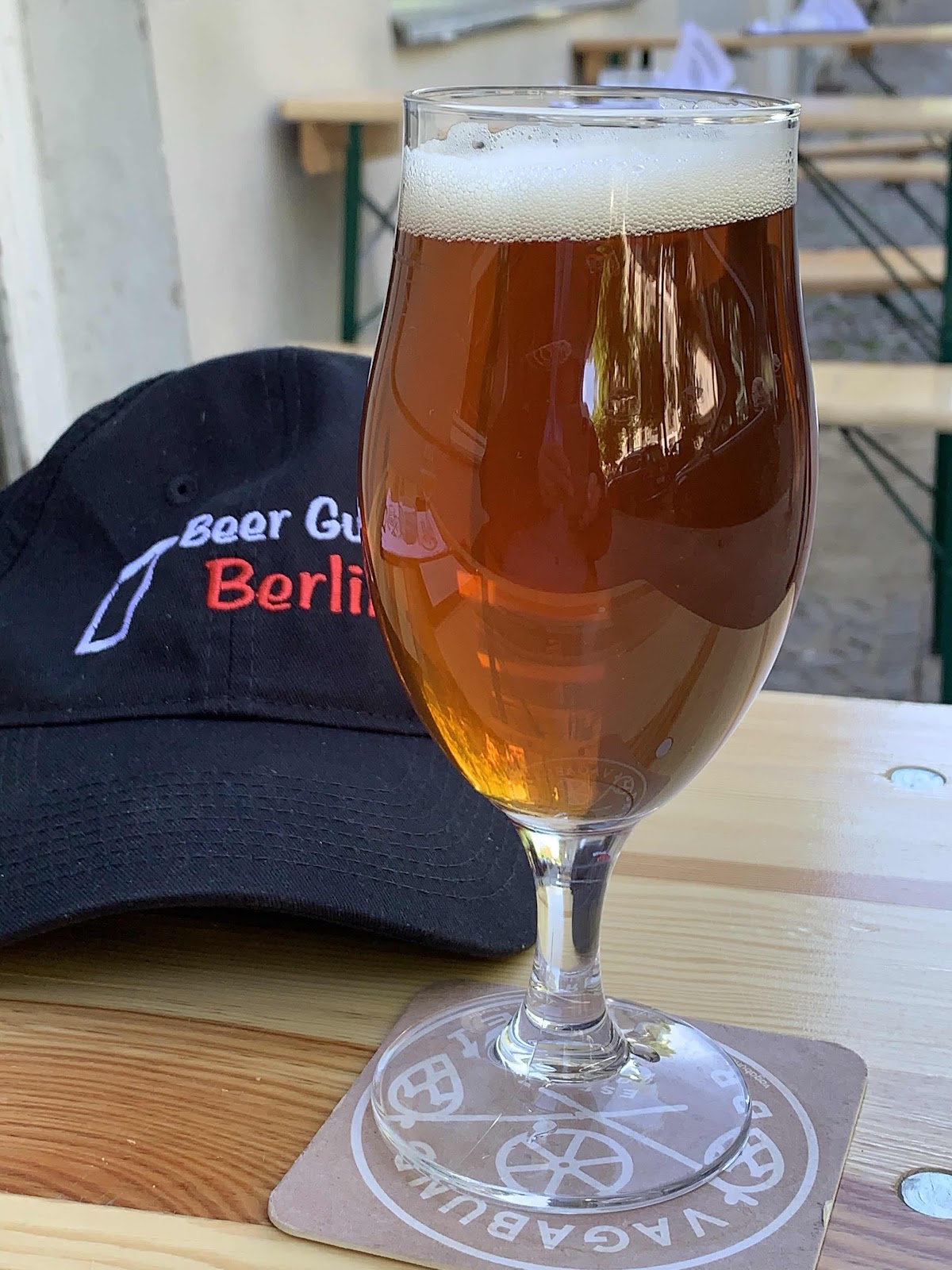 It was getting along time for me to leave to make my next appointment. The bartender kindly offered me a sample of their Berliner Weisse and I accepted. 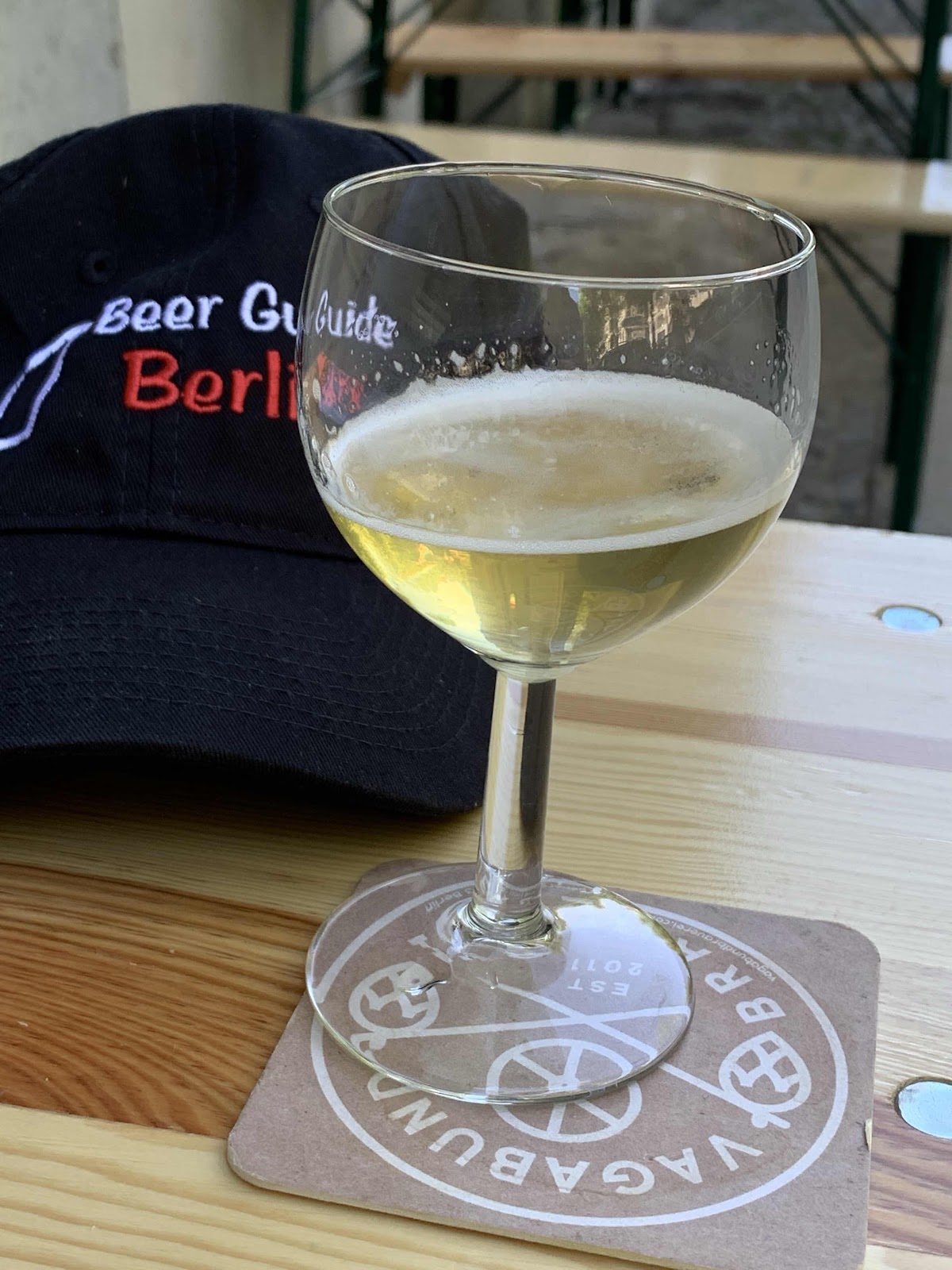 The Brett character was noticeable but not too strong. It made the beer interesting, much more than the typical one dimensional “kettle sours” that most breweries do. On any other day I would have stayed for a full pour.
My next stop, and “undisclosed location” home the Schneeeule Brewery — though it is more of a “fermentarium” as the wort is actually brewed elsewhere. But the magic here is in the fermentation so this is where the action is.
I started off with their flagship beer, Marlene.  This one was aged a bit, about 18 months since bottled — and 6 months past the “best by” date but that can be ignored with these beers. 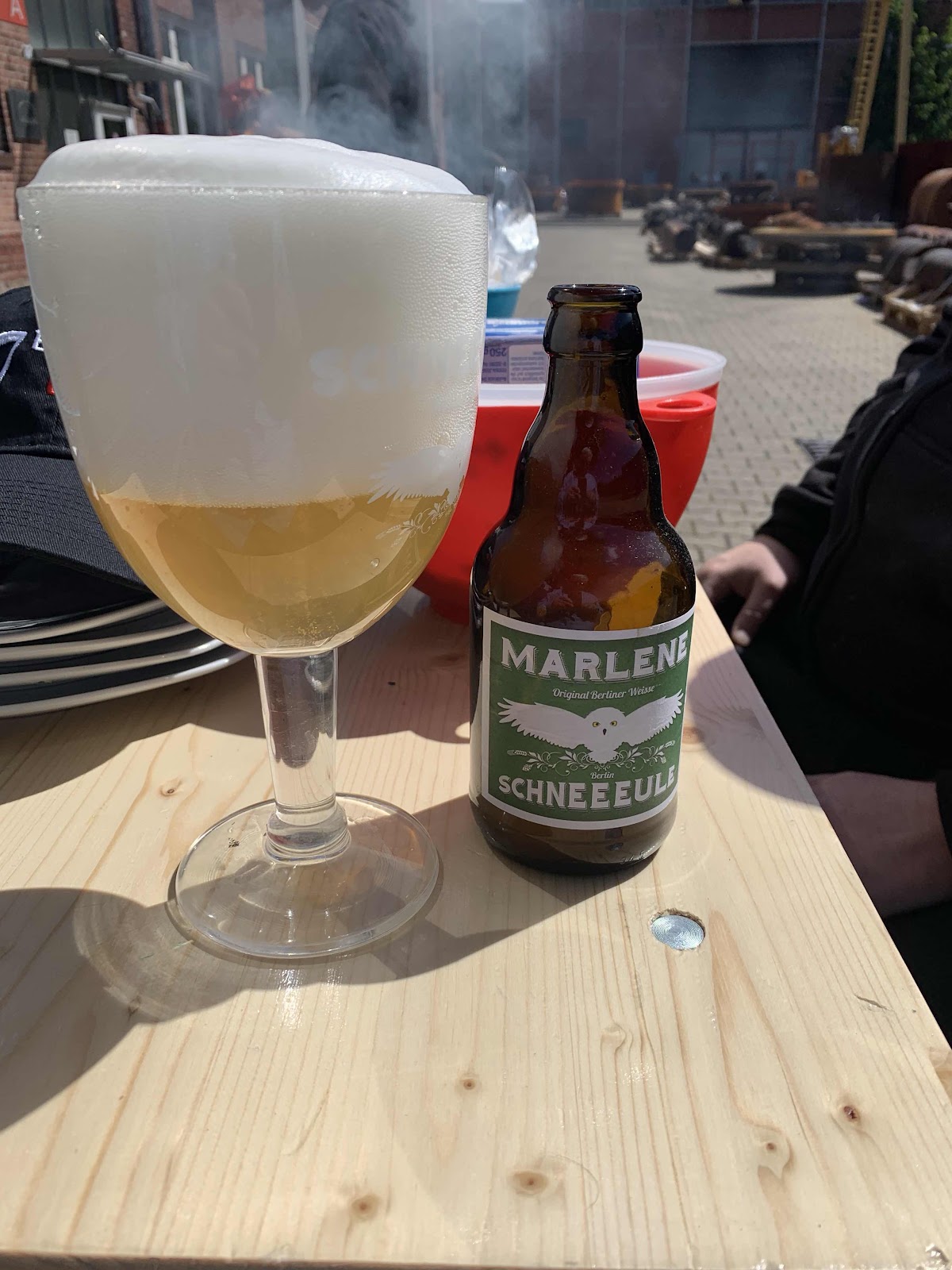 To me, Marlene is the Gold Standard to which all Berliner Weisse should be compared. This one did not disappoint. It was not quite as “funky” as a fresh one but nicely tart — enough to let you know “this is no ordinary beer” but not so much you feel compelled to adulterate with a sweet fruity syrup. Yum.
Next up was a three year old Yasmin, a Berliner Weisse brewed with Jasmin. Again, a bit mellower than a fresh one but nicely complex 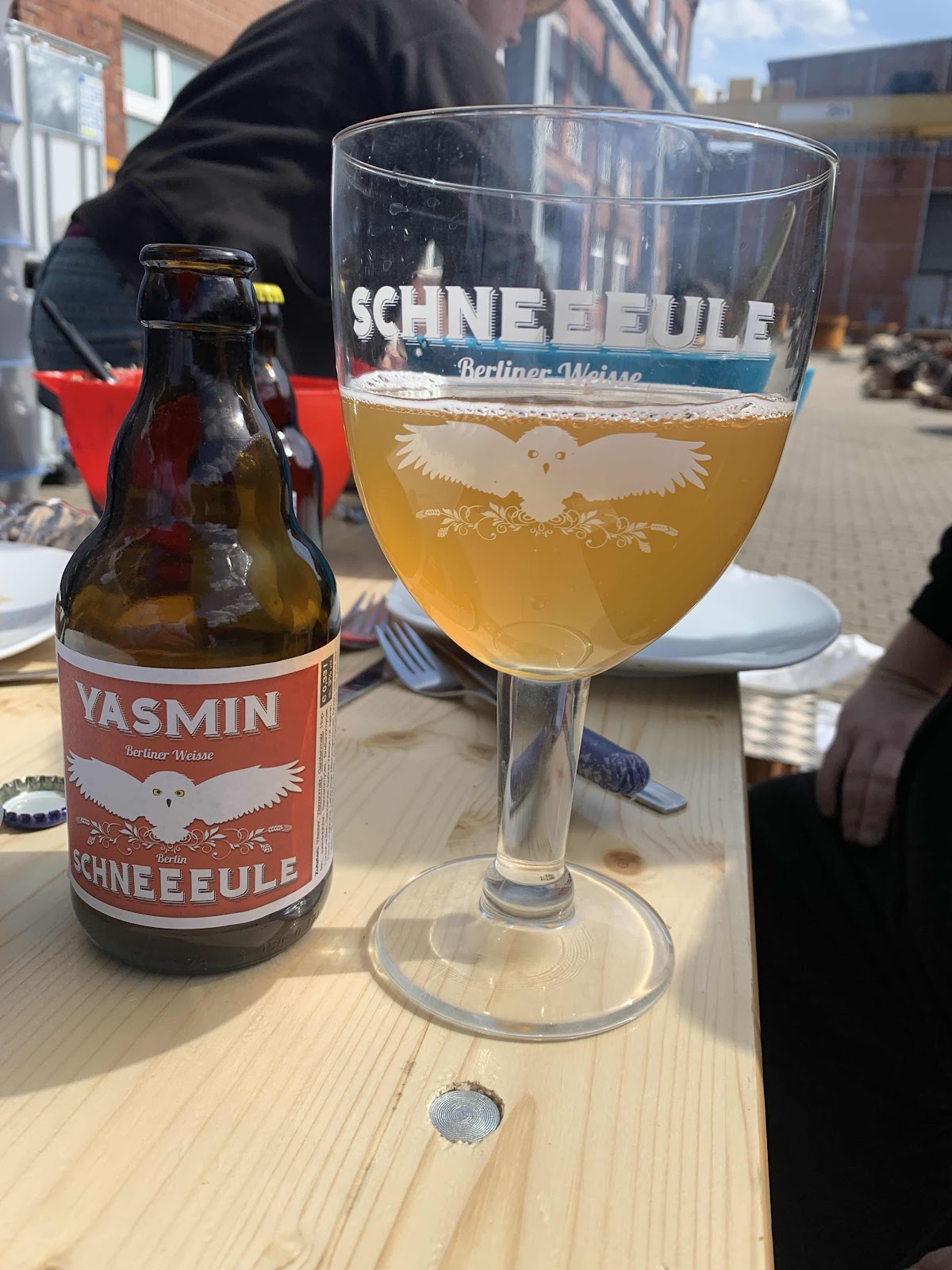 Next up was a new beer for me, Mr Paul — a Bretted Porter. This was was just bottled (by hand — and hand labeled — as are all their beers). 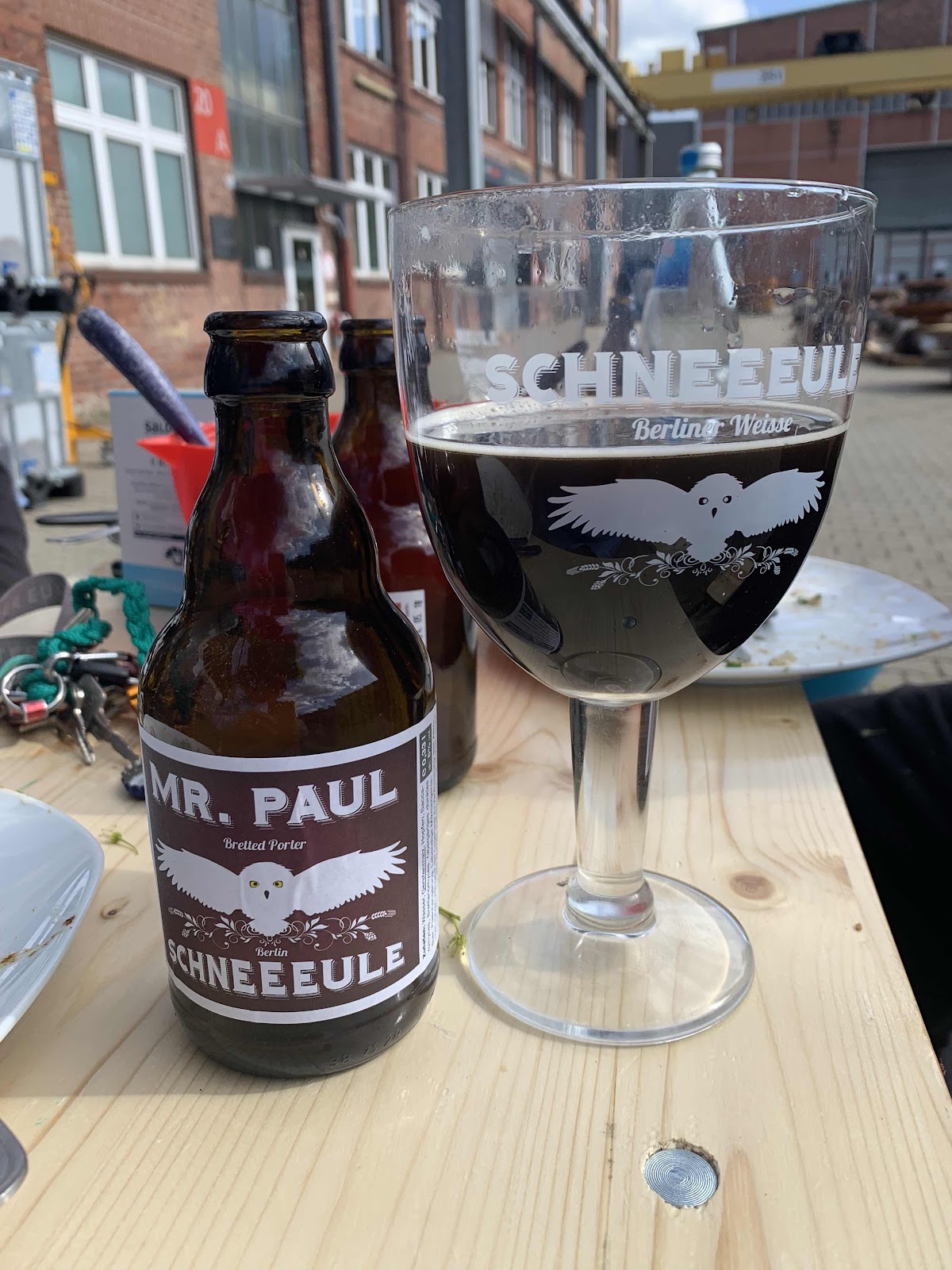 Very nice. I imagine this was a porter was like in the old days when they blended a sour porter with fresh. The wort is made from the same grain bill as the Bruno just with different “critters.”

The last beer was an experimental beer, not publicly available— an extra ginger version of Irmgard ginger Berliner Weisse with habanero peppers. Oh boy. You got one kind of burn from the ginger, another from habaneros plus the acidity of the base beer.  Ten years ago I would have loved this beer. I loved it today, but I could hear my gut saying “You want this beer, go ahead but I will make you pay tonight” — one of the many downsides of being an Old Fart™️. I drank about a third and pined for my youth and its iron clad stomach. 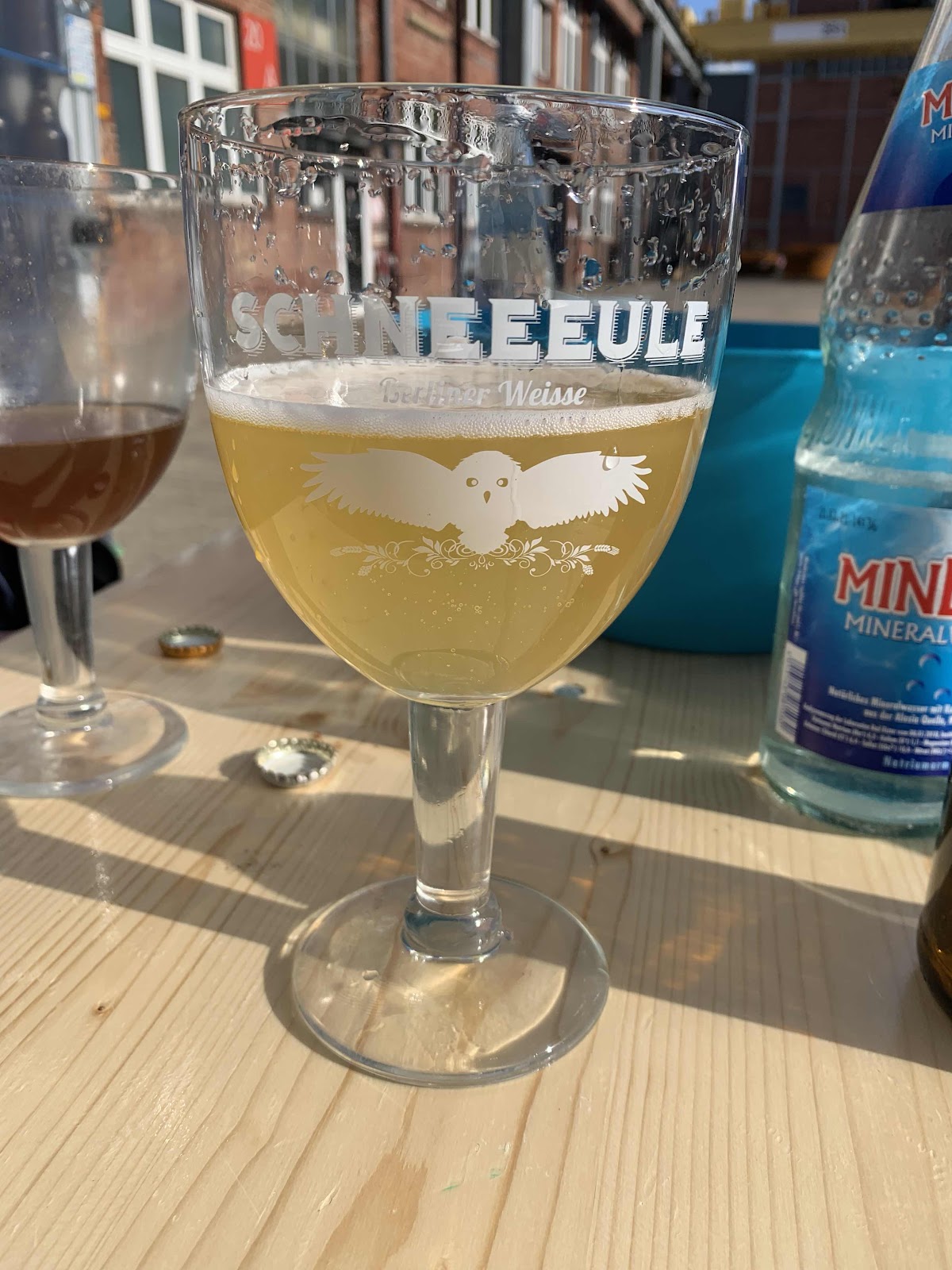 I accepted a kindly offered ride back to civilization, where I ended up at Eschenbräu, my favorite “Traditonal Style” brewpub in Berlin. The brewery and pub is in the basement of a student residence (a/k/a “dorm”). I am sure I would have flunked out if I’d had this brewery in my building while at University. 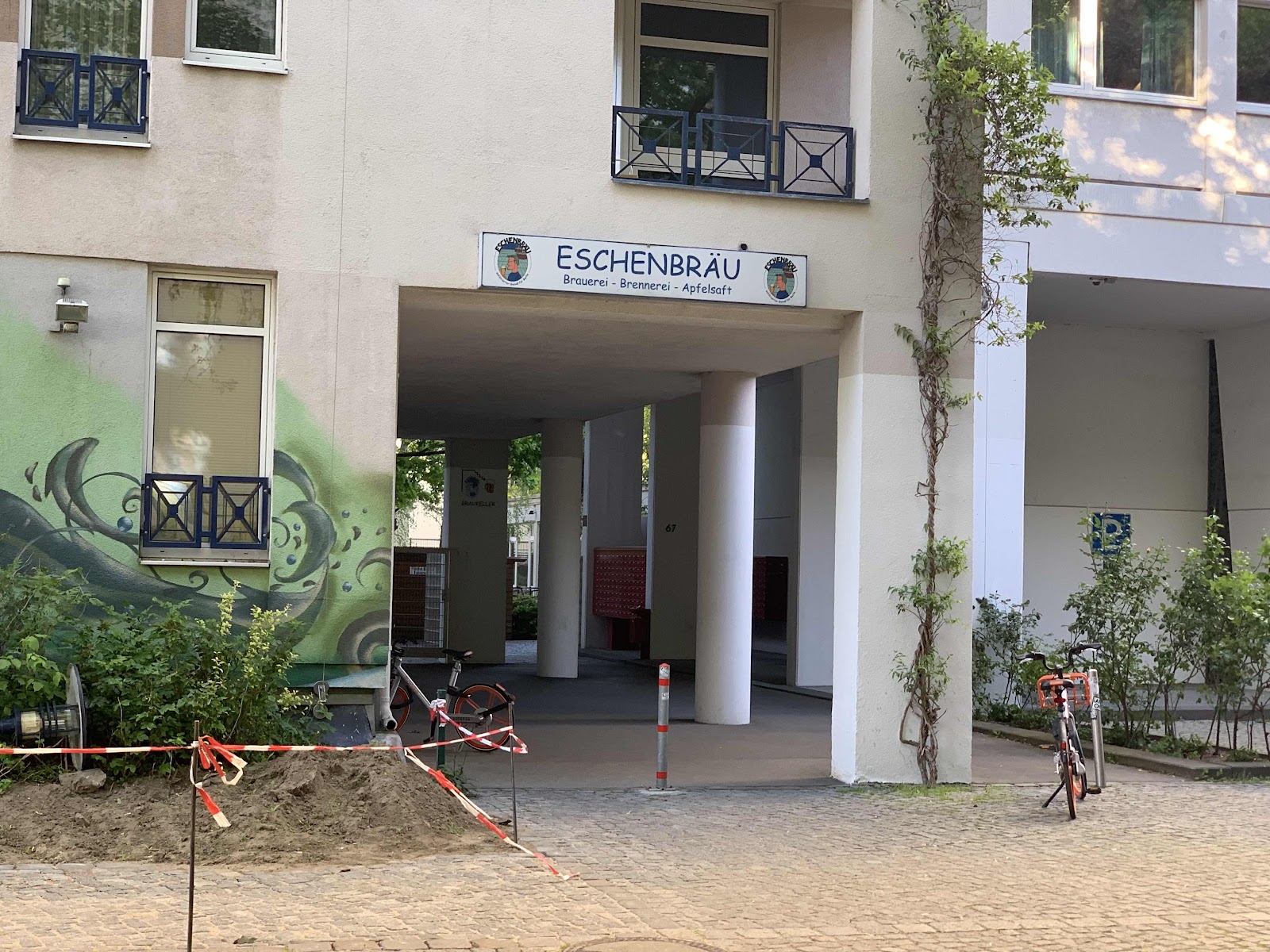 I started off with my favorite, the Panke Gold 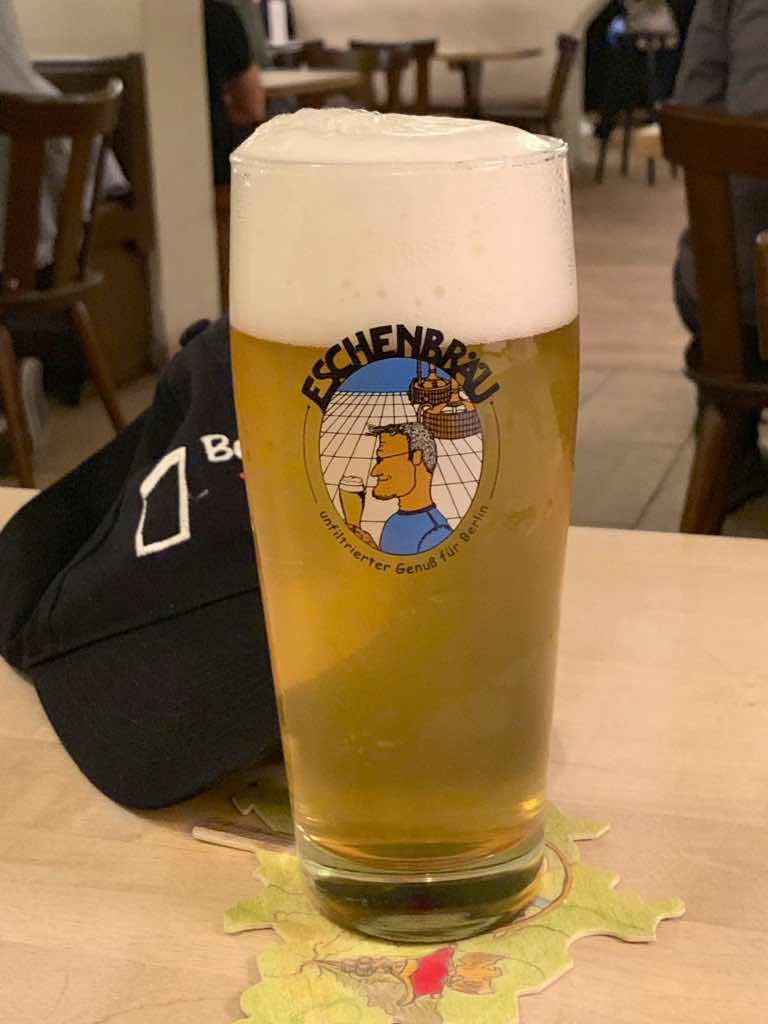 Wonderfully drinkable, it is my favorite Berlin beer for “mass consumption” — I could (and have) drink it all afternoon or evening. But to me fair to my readers, I felt obligated to try the other beers on tap. 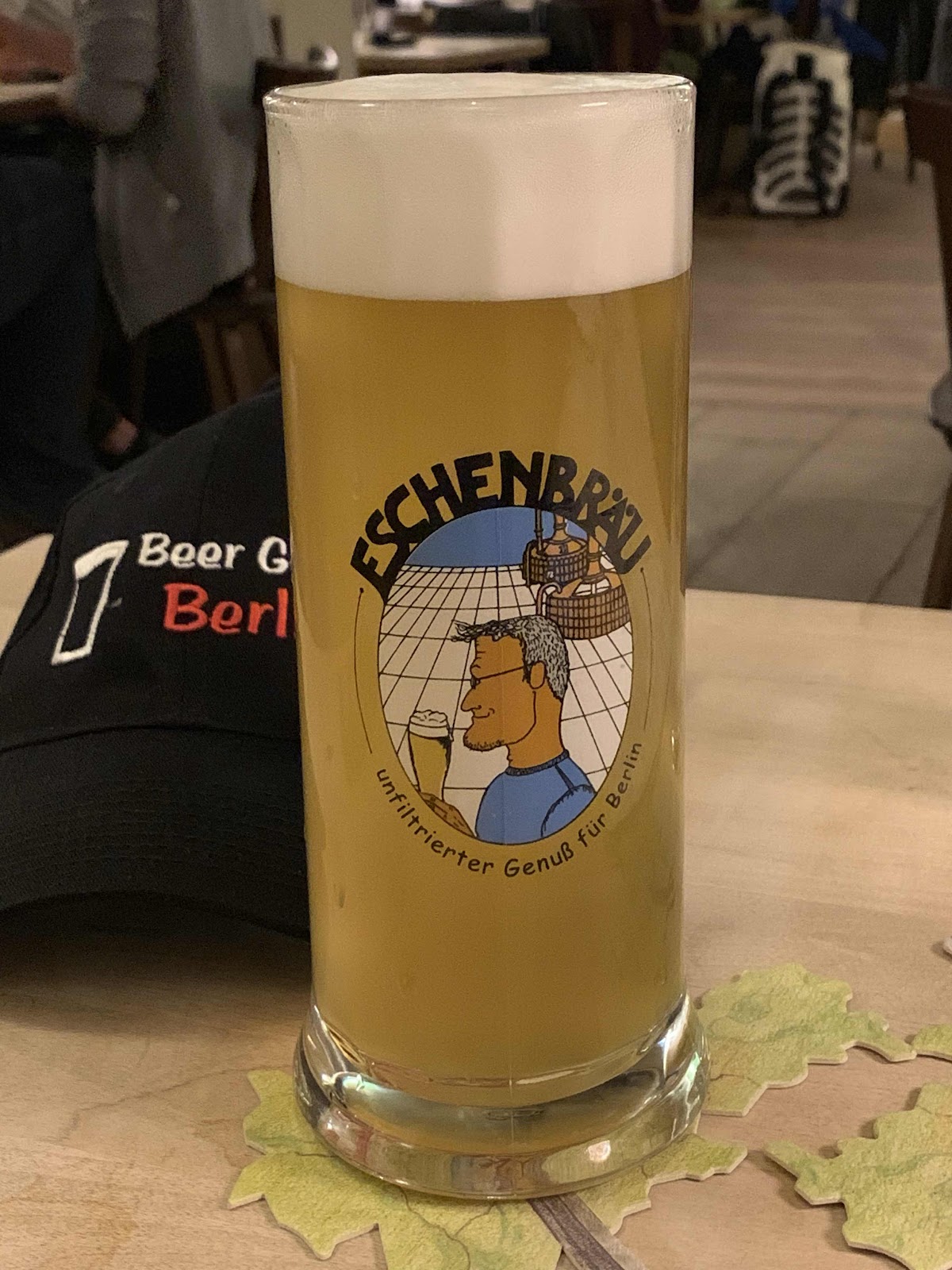 This is their Pils. A bit hazy (not as bad in real life as in the picture) but that is expected since all their beers are unfiltered. Nicely bitter and easy drinking — a good all around beer but I like the Panke Gold more.
In the warmer half year they brew a Hefeweizen — which I remember as being good but I wasn’t in the mood for that. In the cooler months they brew “Roter Wedding” a nice red lager. The other year round beer is their Alt Berliner Dunkel, so I had one. 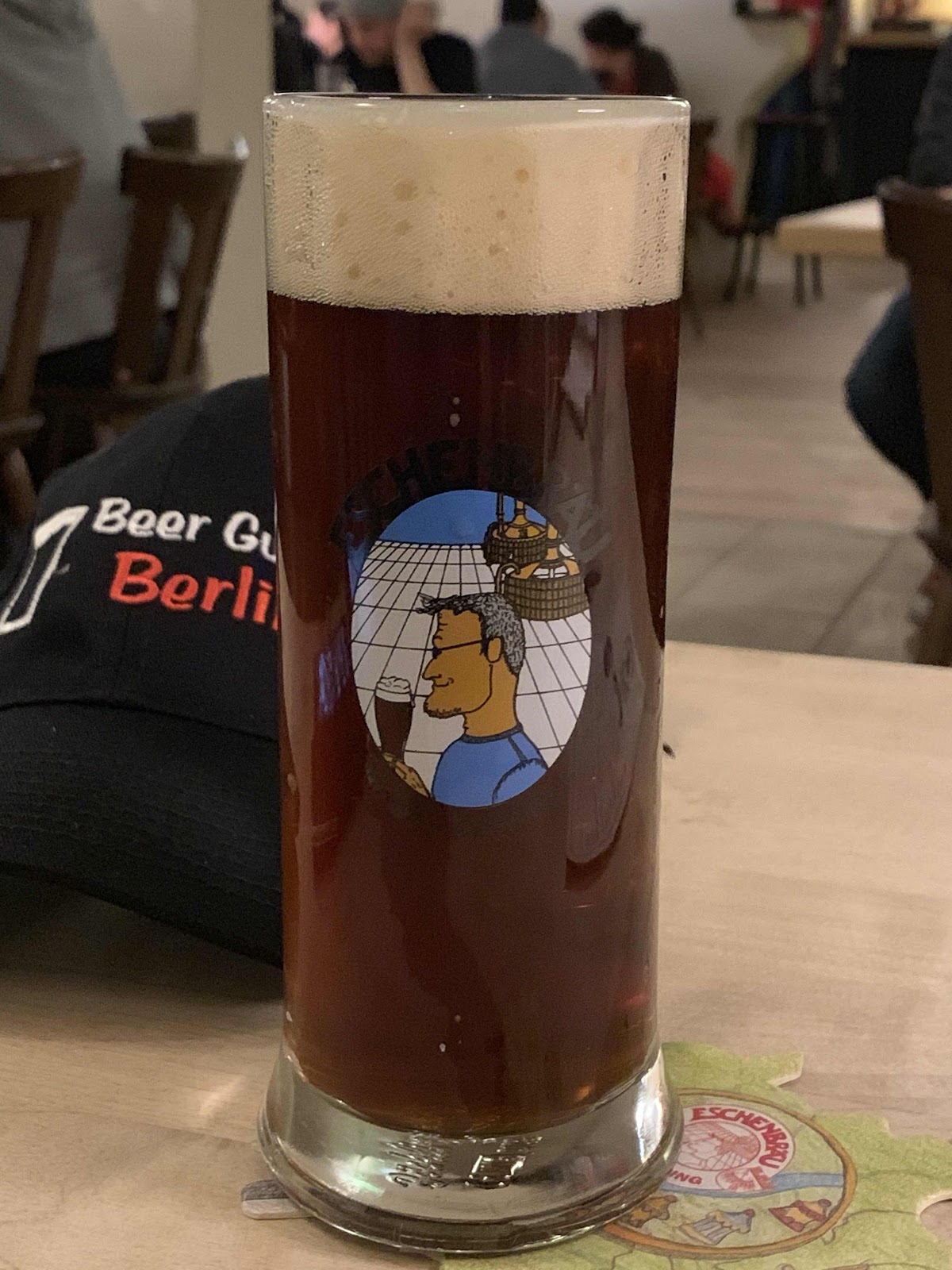 It is a tasty well made Dunkel but it doesn’t excite me that much. I’d much rather drink the other two beers.
They don’t have much food, but they do make a “Flammkuchen” — basically a flatbread pizza originally from Alsace. 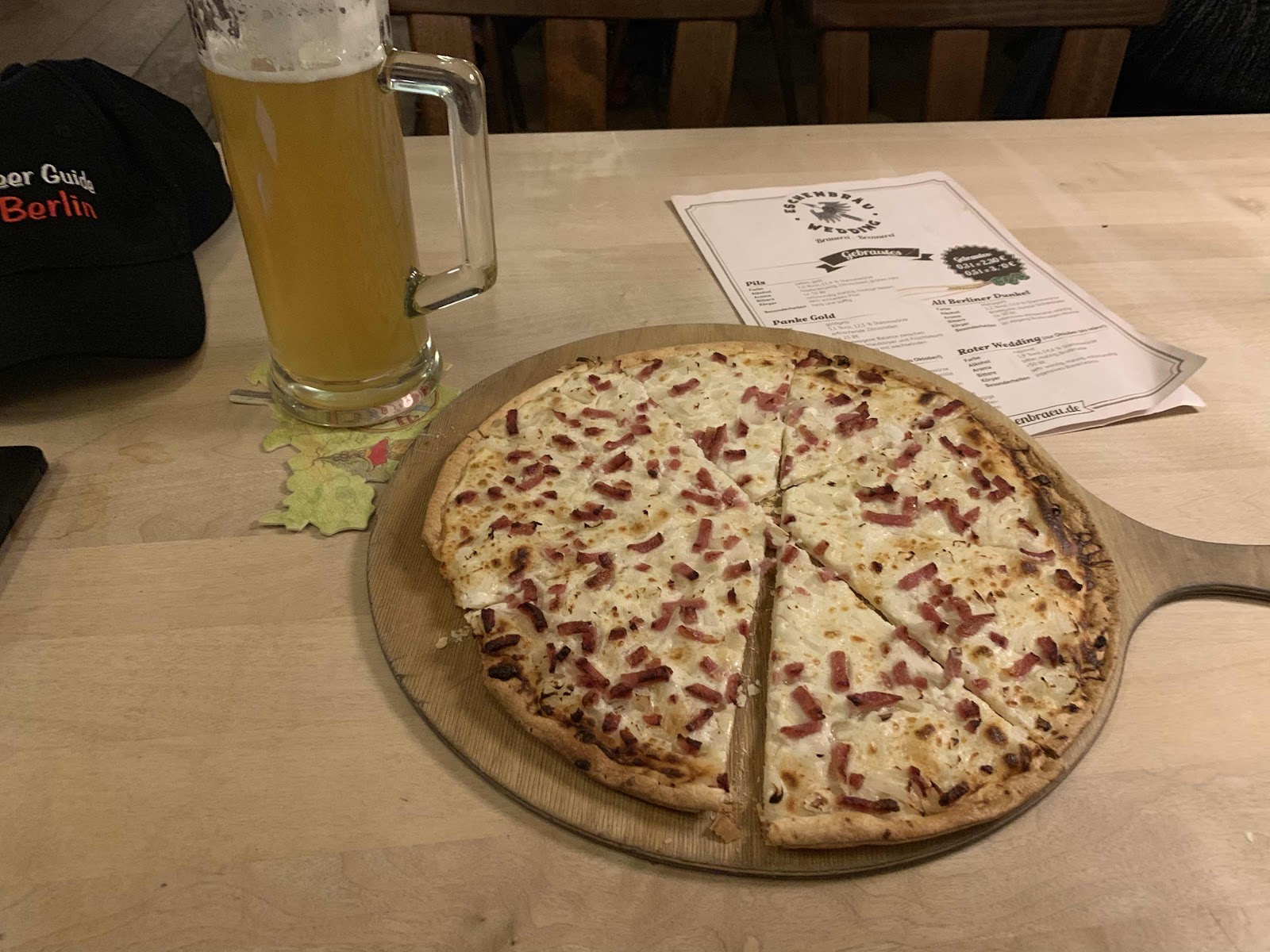 I was getting ready to leave when I heard the waiter say “Maibock” to the couple at the other end of the table. He must have seen my interest and brought over a table card with the details. Strength of about 6.5% — right in that deadly range where it can drink like a normal beer but hits you after you’ve had a few. I ordered one. 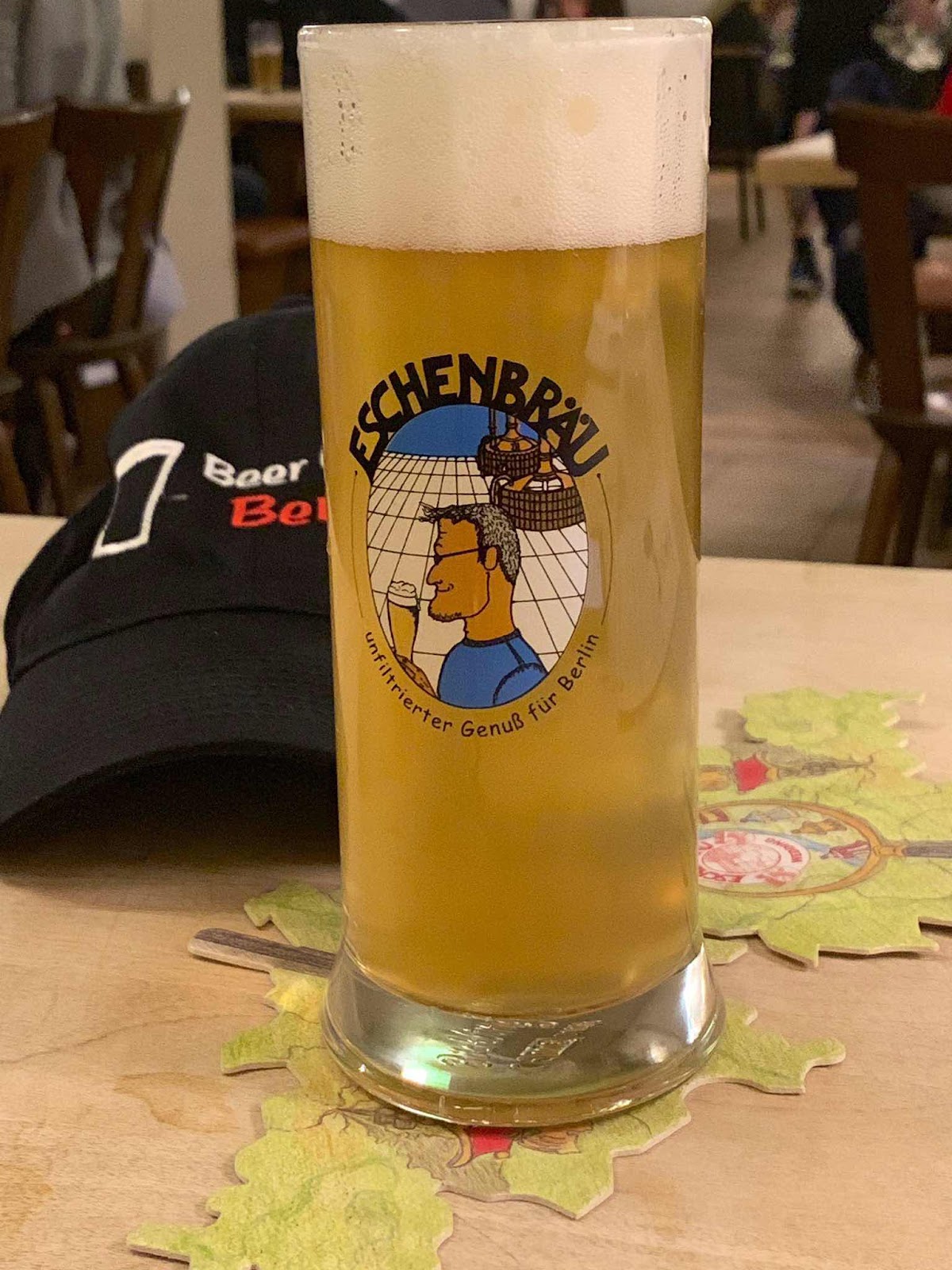 It was delicious. It was good that I was tired because I really wanted another but it was a long trek back to my hotel and wisdom prevailed.
With two days left and I down the the triage point — deciding which places I won’t have time to visit. It is complicated by many places being closed on Monday and with a morning train on Wednesday I don’t want to be out too late on Tuesday.
BTW, if you haven’t checked it out yet, take a look at BeerGuideBER.com were all of these places (and more) are listed along with transportation connections. Also available as IOS and Android apps.
Posted by The Mad Brewer at 1:42 AM

Thank you for taking the time to document your day's.
Much appreciated and wonderfully dry humour...all the best.