One of the problems with traveling to Europe from the US is because of the time change one is up a ready to drink beer when it is “too early” for the locals. That is why I am always happy to find a place serving interesting beer that is open early.
One such place on my “To Do List” in Berlin was R/D Coffee and Craft Beer. It sounded like a coffee shop that installed some beer taps. So I went to check it out. 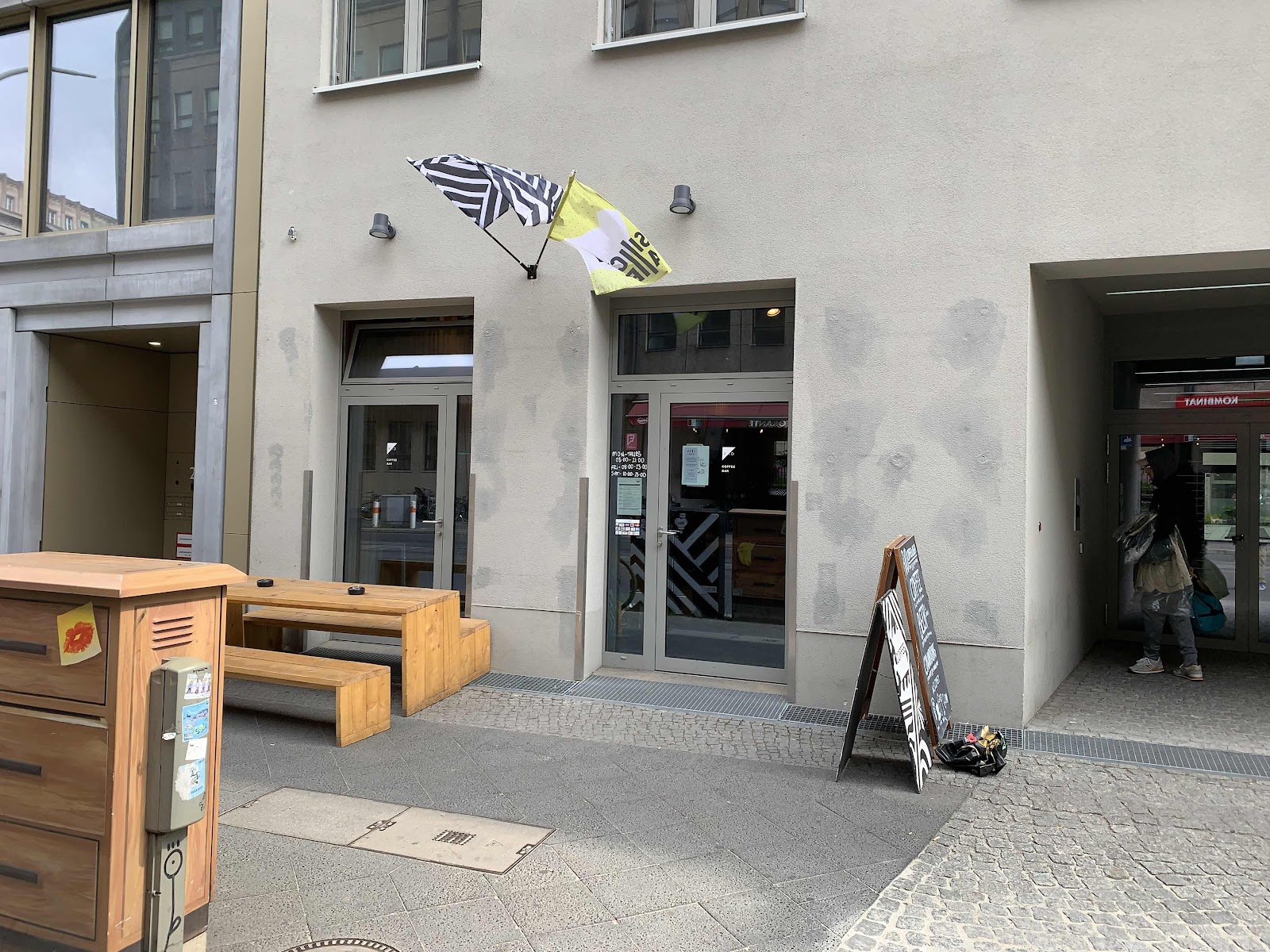 But when I got inside their board said “No draft beer today.” Oh noes, what’s up? Turns out their draft system is “broken” and they hope to get it fixed in a week or so. Oh well, maybe next time.
Next on my list was the Zollpackhof, a restaurant and Biergarten near the Hauptbahnhof. 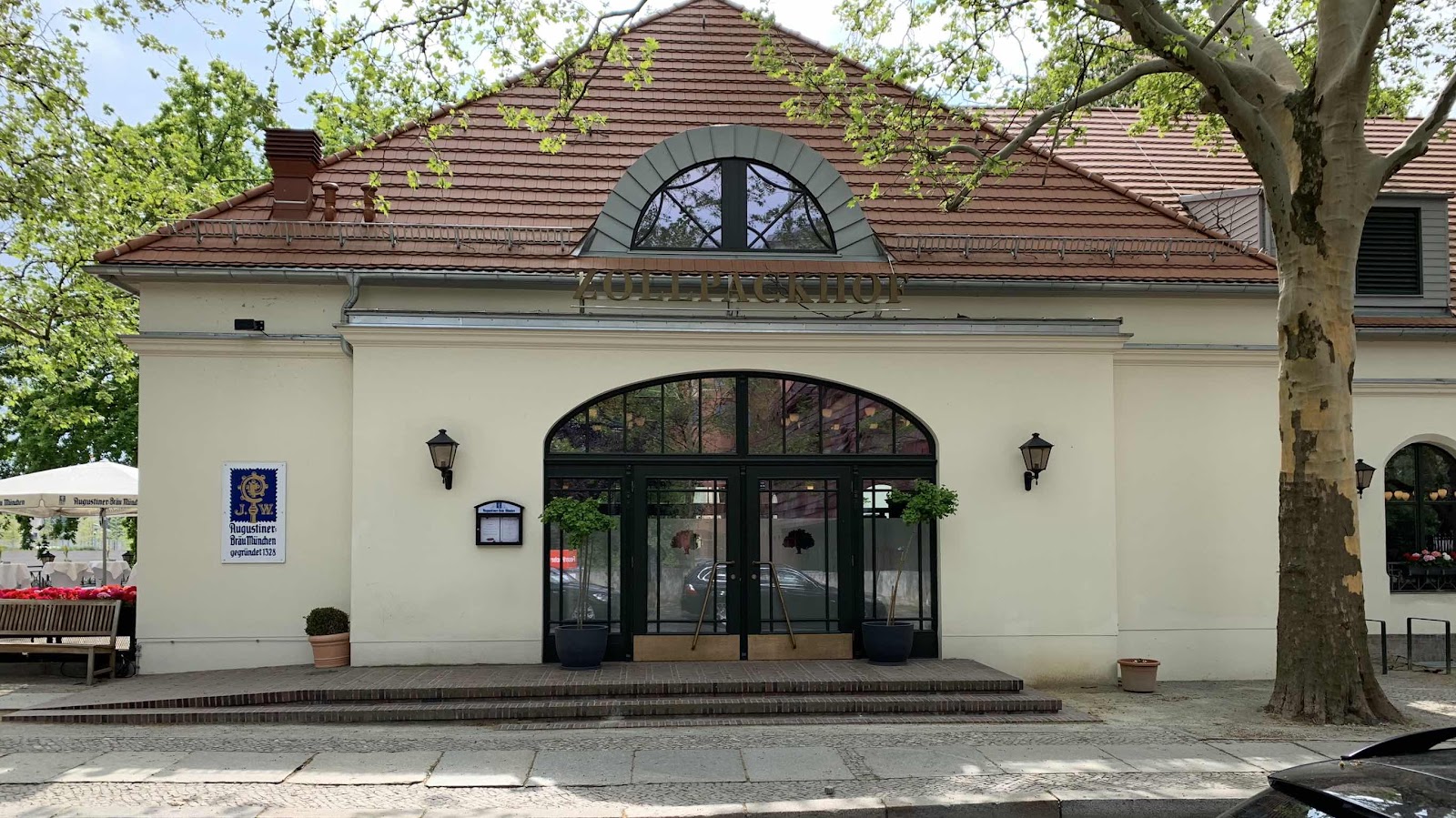 The weather was trying to be nice, warm but overcast and it looked like it was trying to rain.  I decided to try the Biergarten anyway. Very Bavarian with a self serve window. They are an Augustiner München house and had both the Hell and Edelstoff on draft. I order a “small” Hell — small being .5L instead of the normal 1L Mass and Brez’n to go with it. 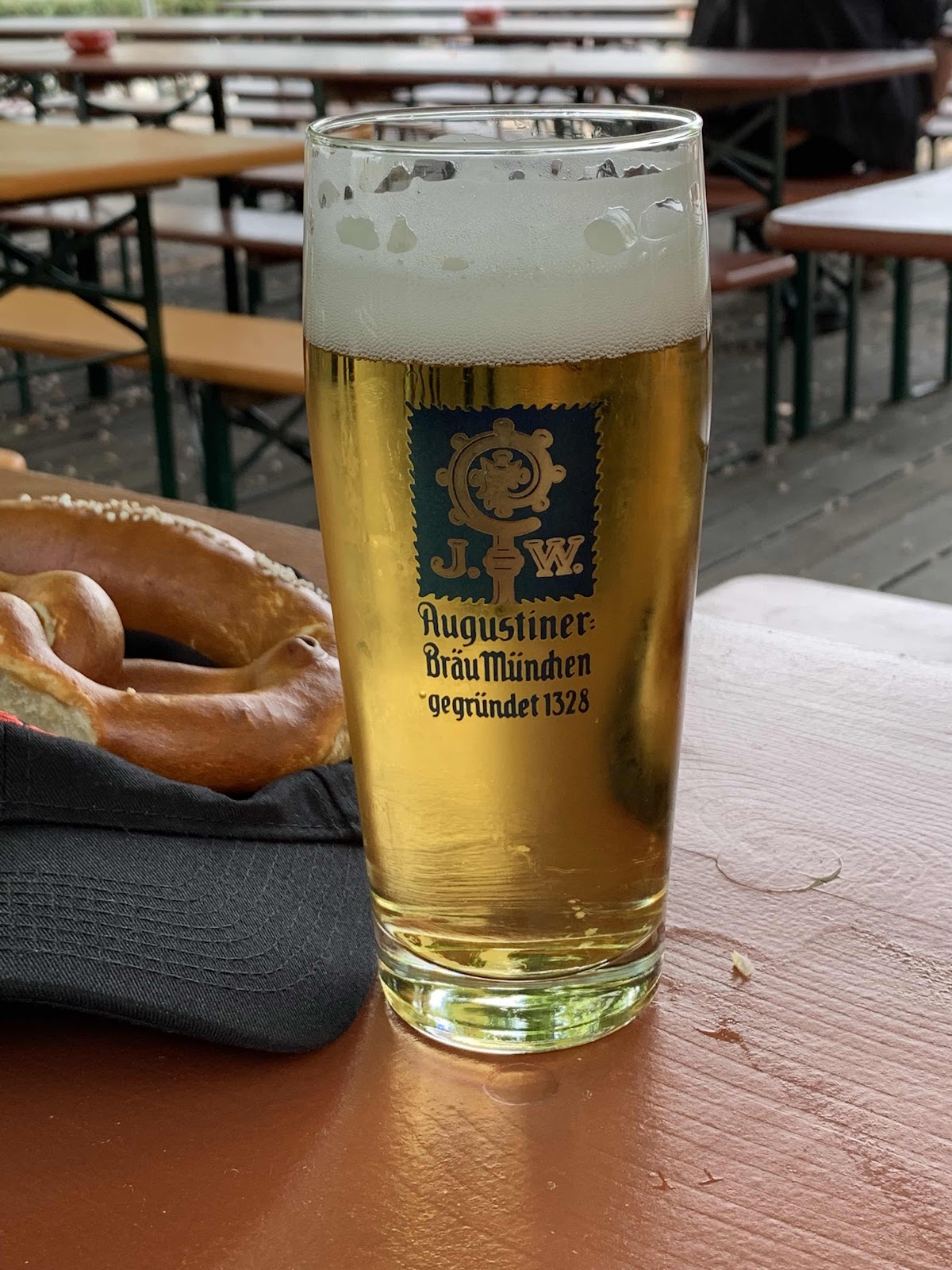 It was pleasant sitting beside the river and the weather was holding so I decided to have an Edelstoff and when I went up to get it I saw they had Weisswurst as well so in the spirit of Bavaria I ordered a pair. 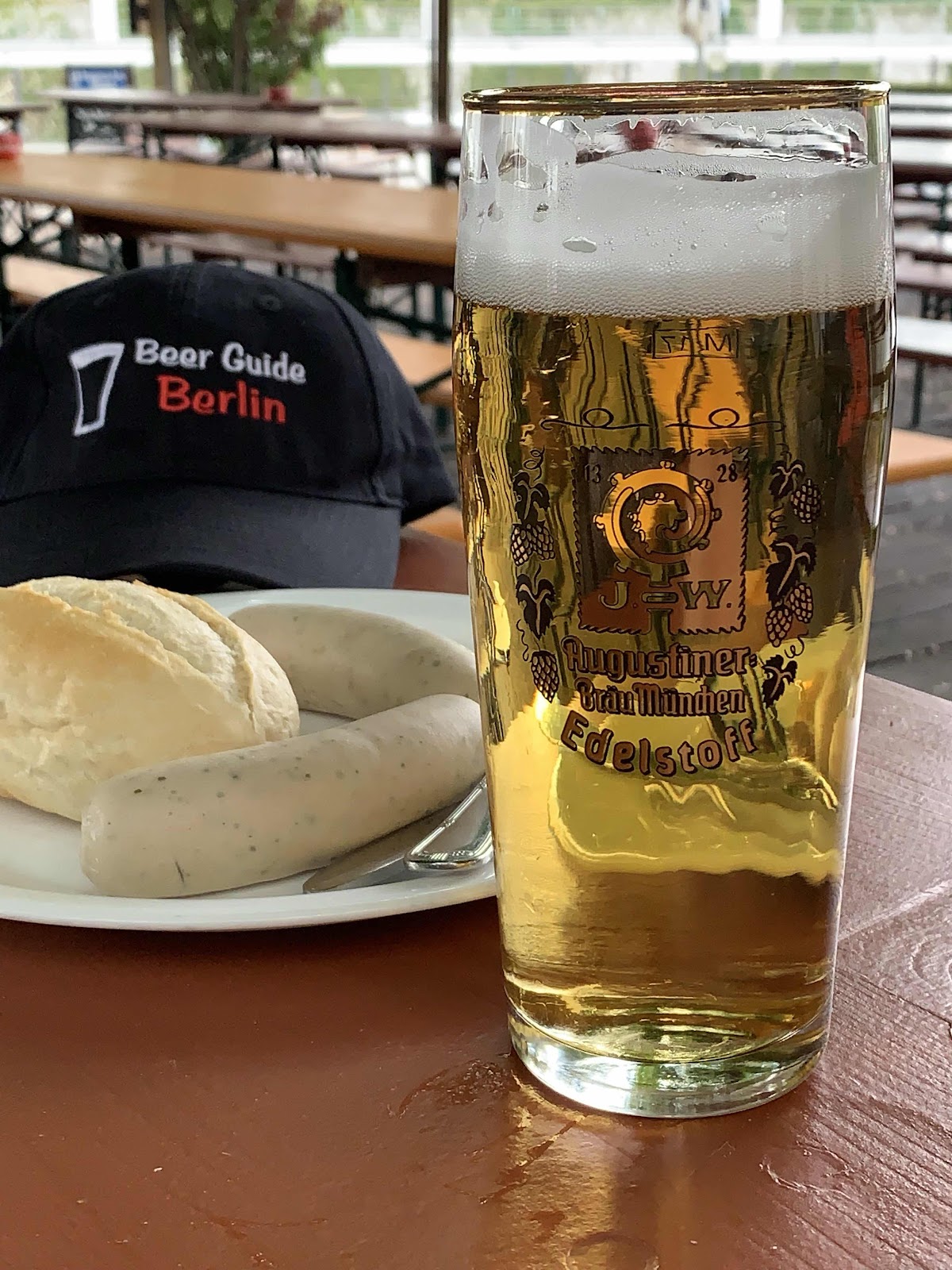 The Augustiner Edelstoff has reached the level of “cult beer” in some circles. Me, I never thought so. It is a fine beer but in truth I prefer the Hell and this just re-enforced that opinion. Let the flame wars begin.
On the way out I notice this... 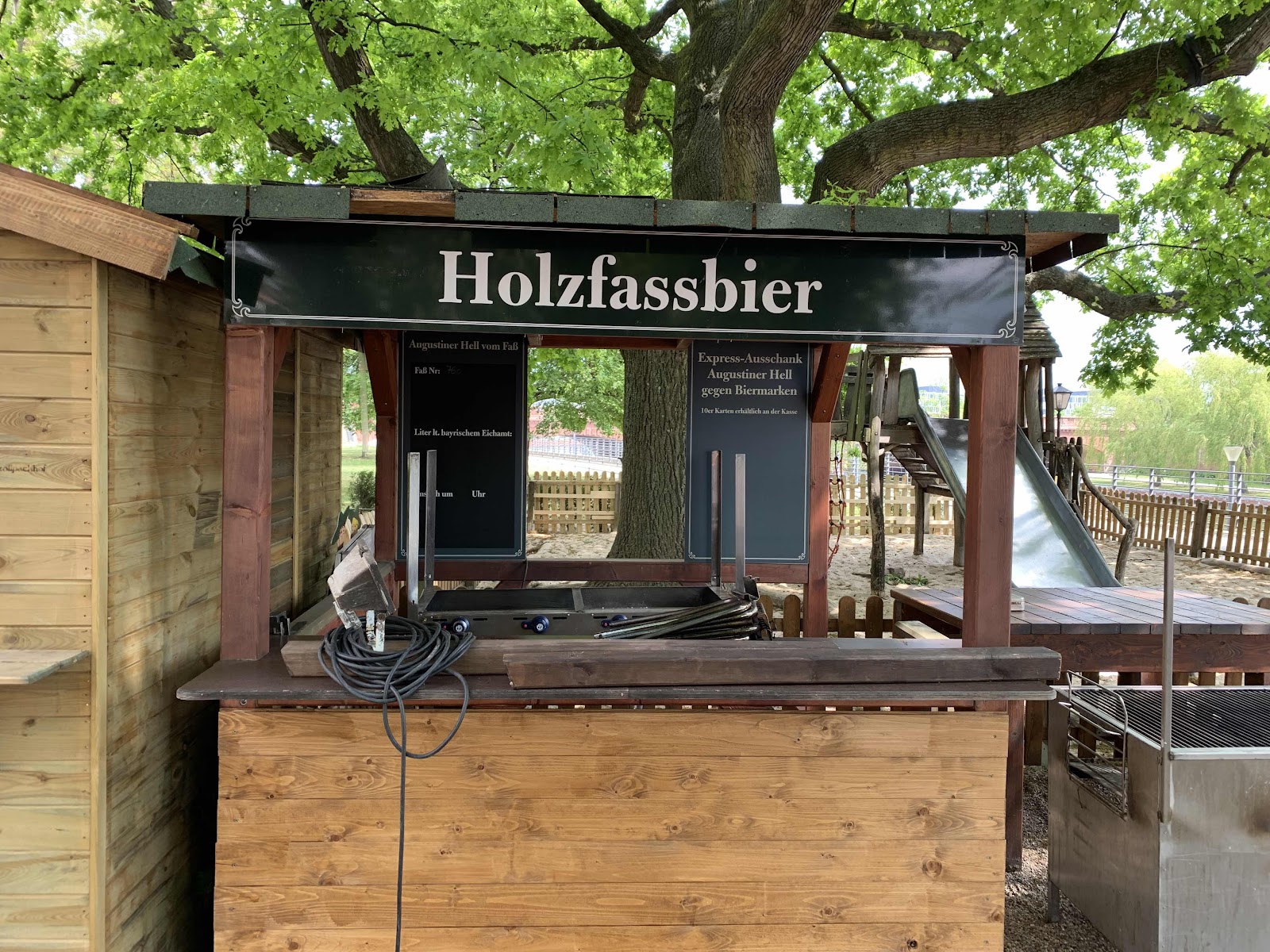 At 6pm I gather they tap a gravity barrel of the Hell. It looks like you have to buy a token first, then exchange the token for a beer. That way the server doesn’t have to slow down to deal with money and can dispense the beer non-stop.  They usually means they serve a lot of beer!
Well, there were beer to be drunk and they don’t drink themselves so it was off to Friedrichshain to check out the new Castle Pub there. Well, I had bad information on the opening times — I had they open by 10am but it turns out they open at 4pm. But I saw it on the internet, it has to be true. Oh, well.
So back on the U-Bahn and tram to Prenzlauer Berg to visit a new brewpub, Bräugier. They were open, so the internet is sometimes correct. 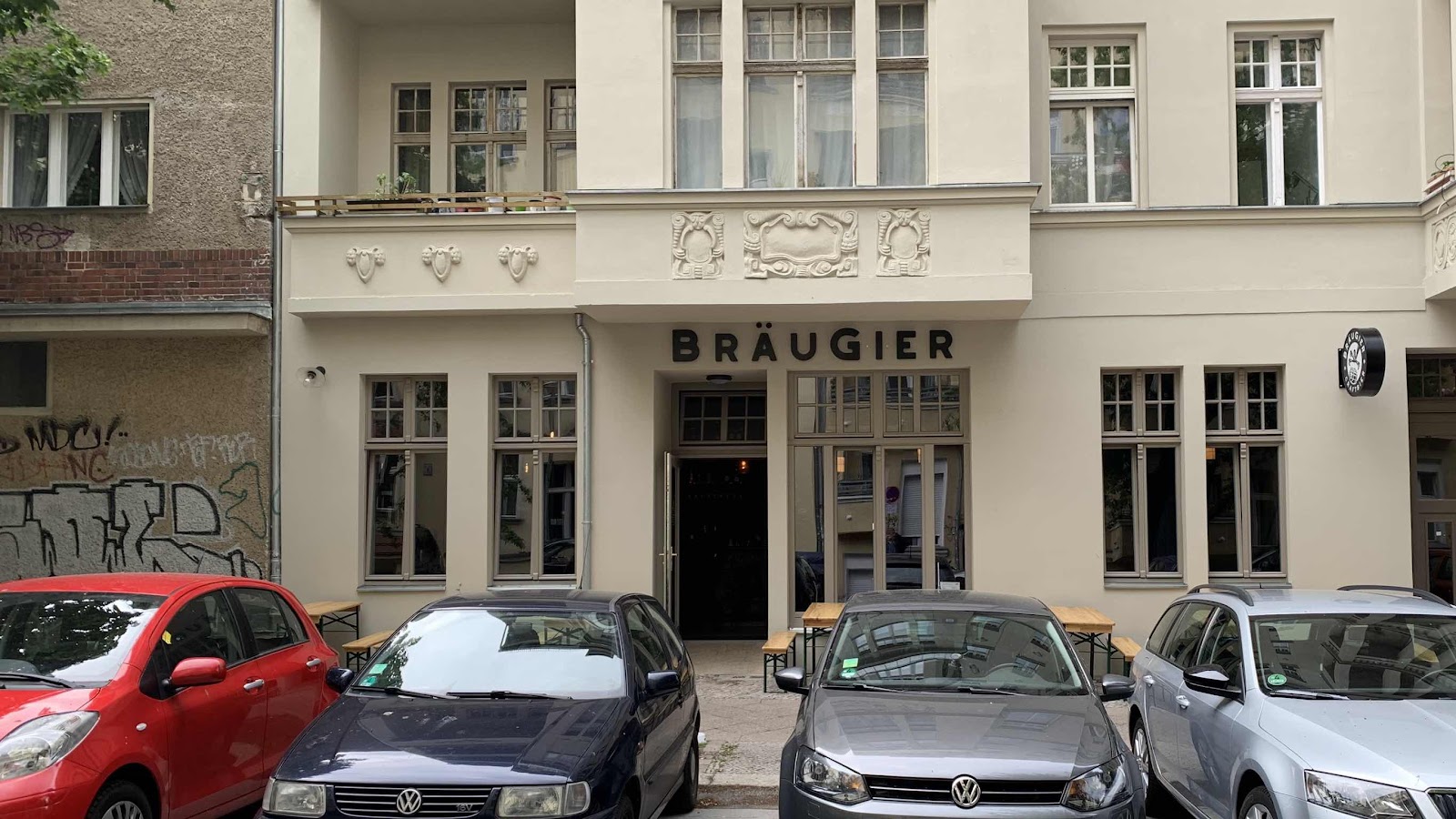 They had a good selection of beers on tap,  mostly their own but a few guests. 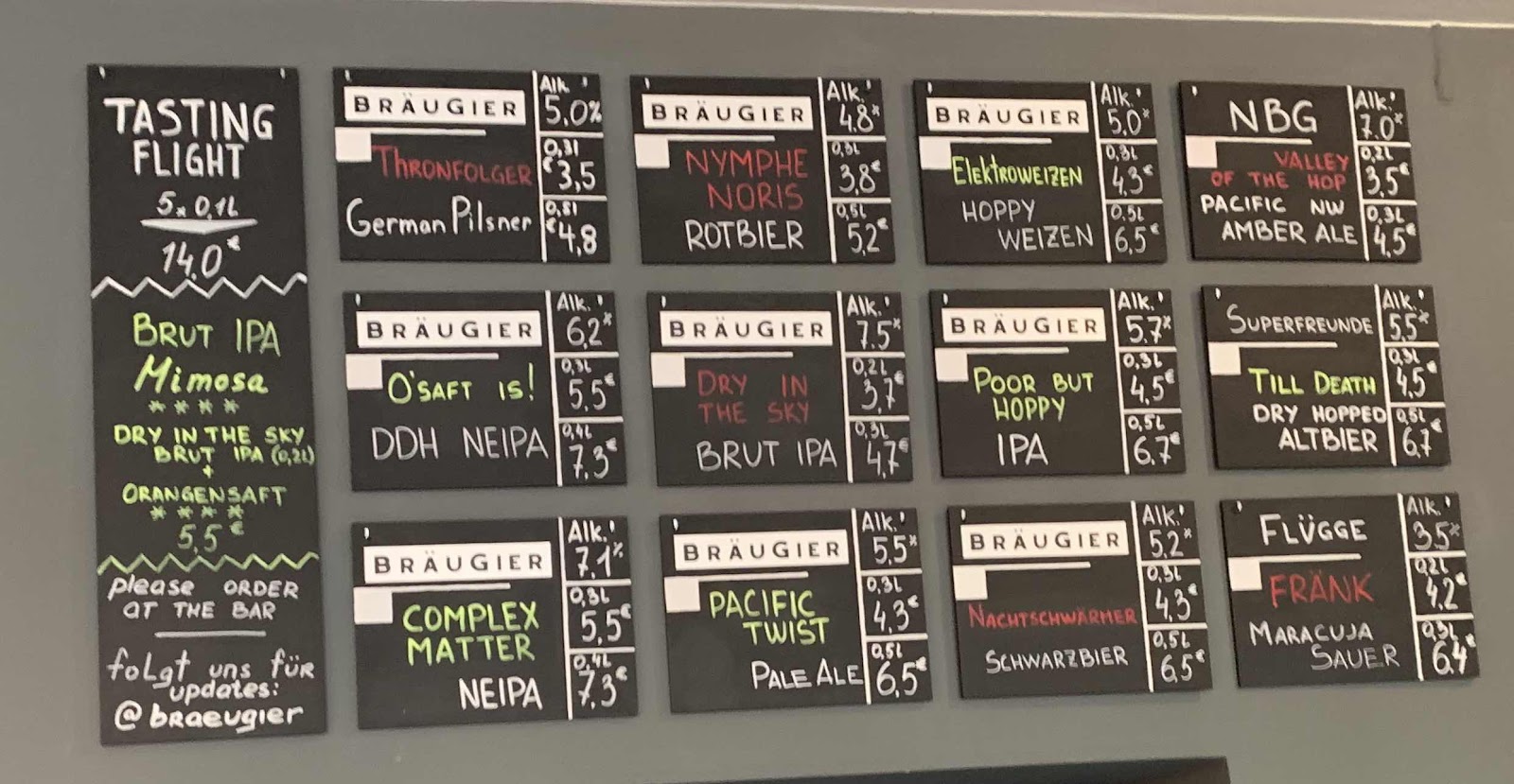 I started with their Pils 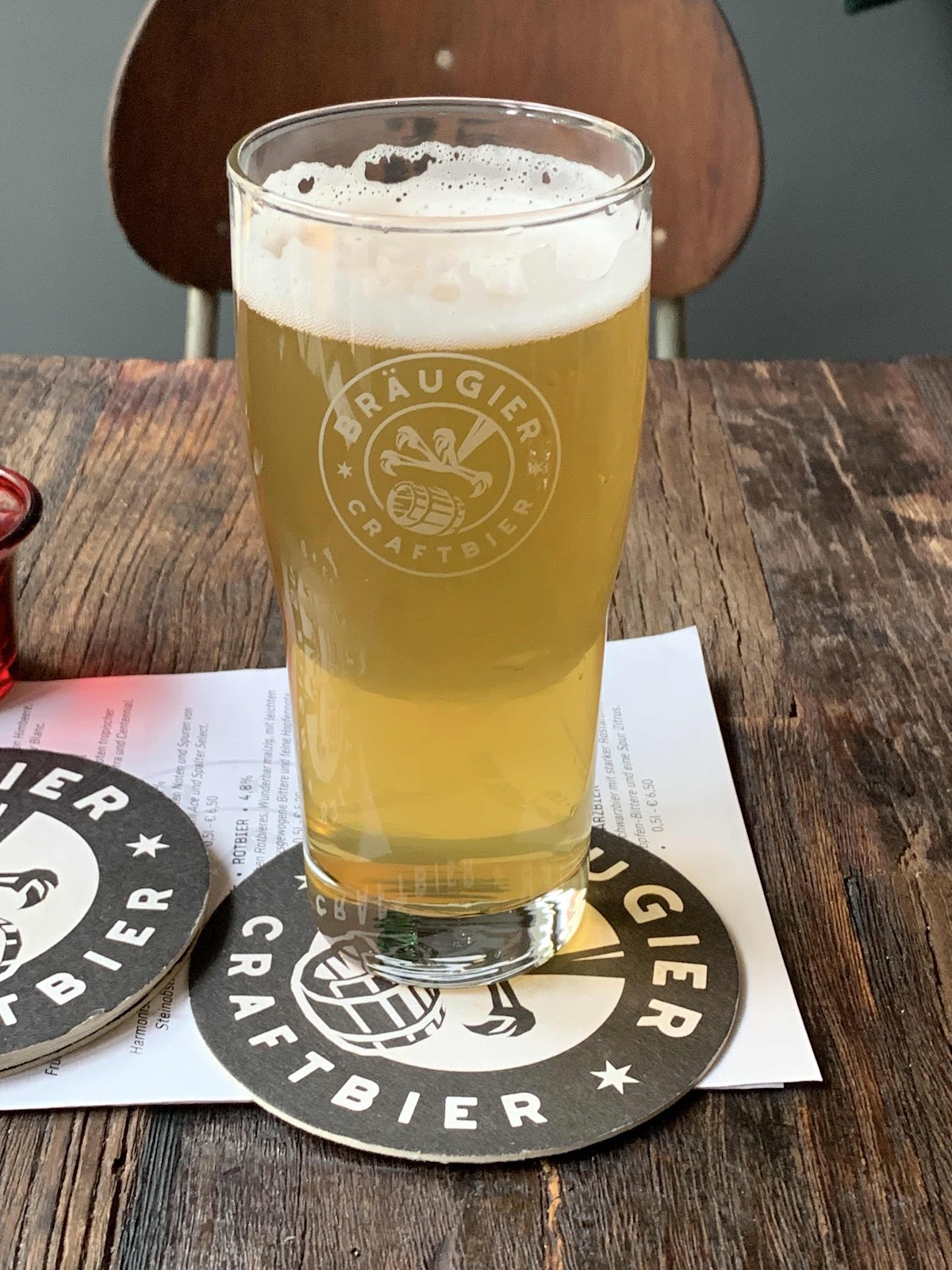 Perfectly fine, a little hoppy and clean. It turns out they are still transitioning to in house brewed beers, the Pils (and the Schwarzbier I had next) were brewed at another brewery, under their supervision. 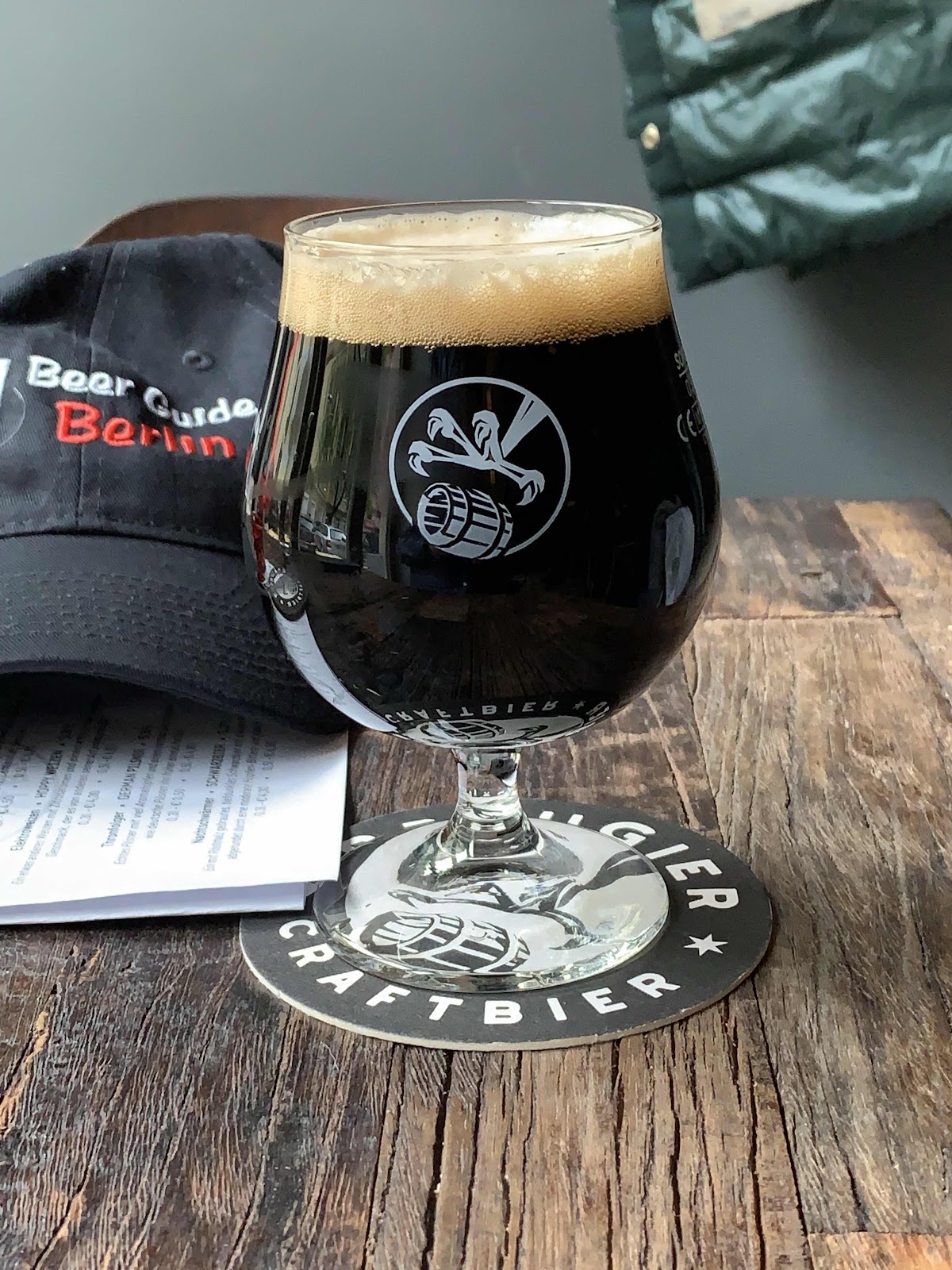 I asked if which of the beers had been brewed in-house and was told the Rotbier was, so I had that next. 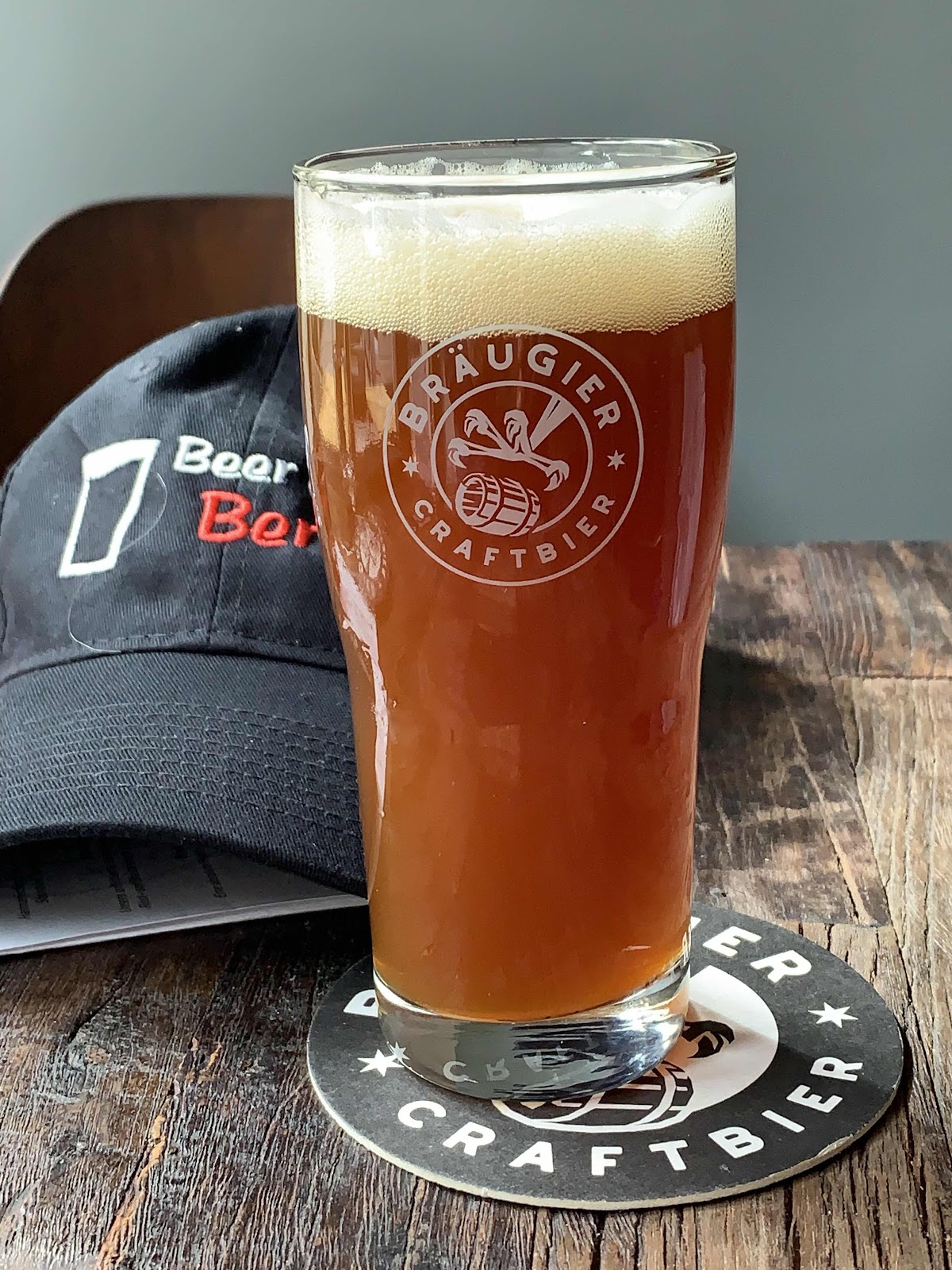 Maybe a tad cloudy but it tasted fine. So I guess they have their new brew system pretty well dialed in. I was told the next beer up would be a Helles but they were waiting for it to clear. Did I want a taste?  Oh yeah. 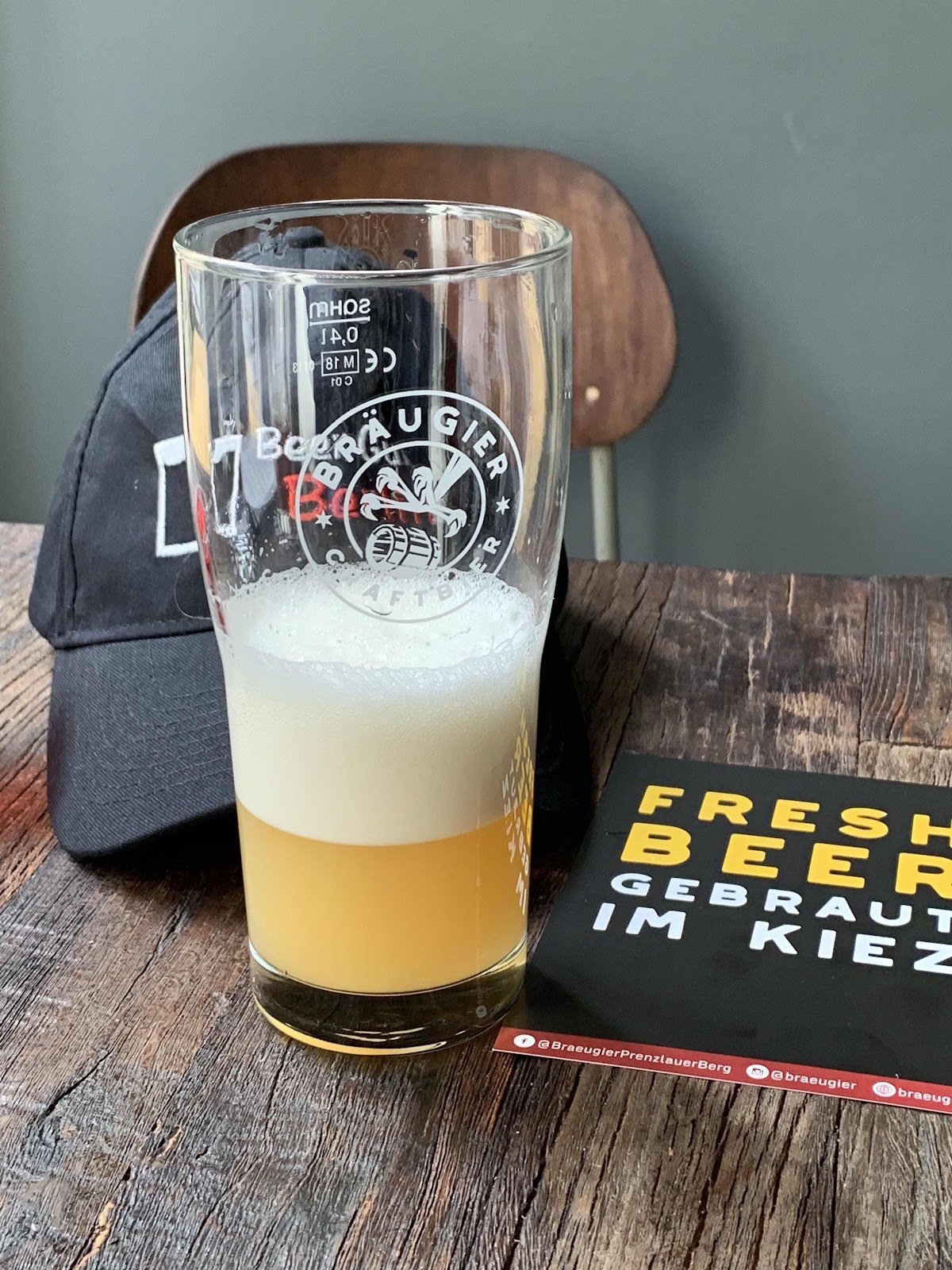 This beer I really liked, would gladly have paid for a full glass. It was getting time to move on but I thought I would try the Flügge Sour they had on. I’ve heard good things about Flügge (based in Frankfurt) but this was my first chance to try one. This one was a Passion Fruit sour it was very nice. 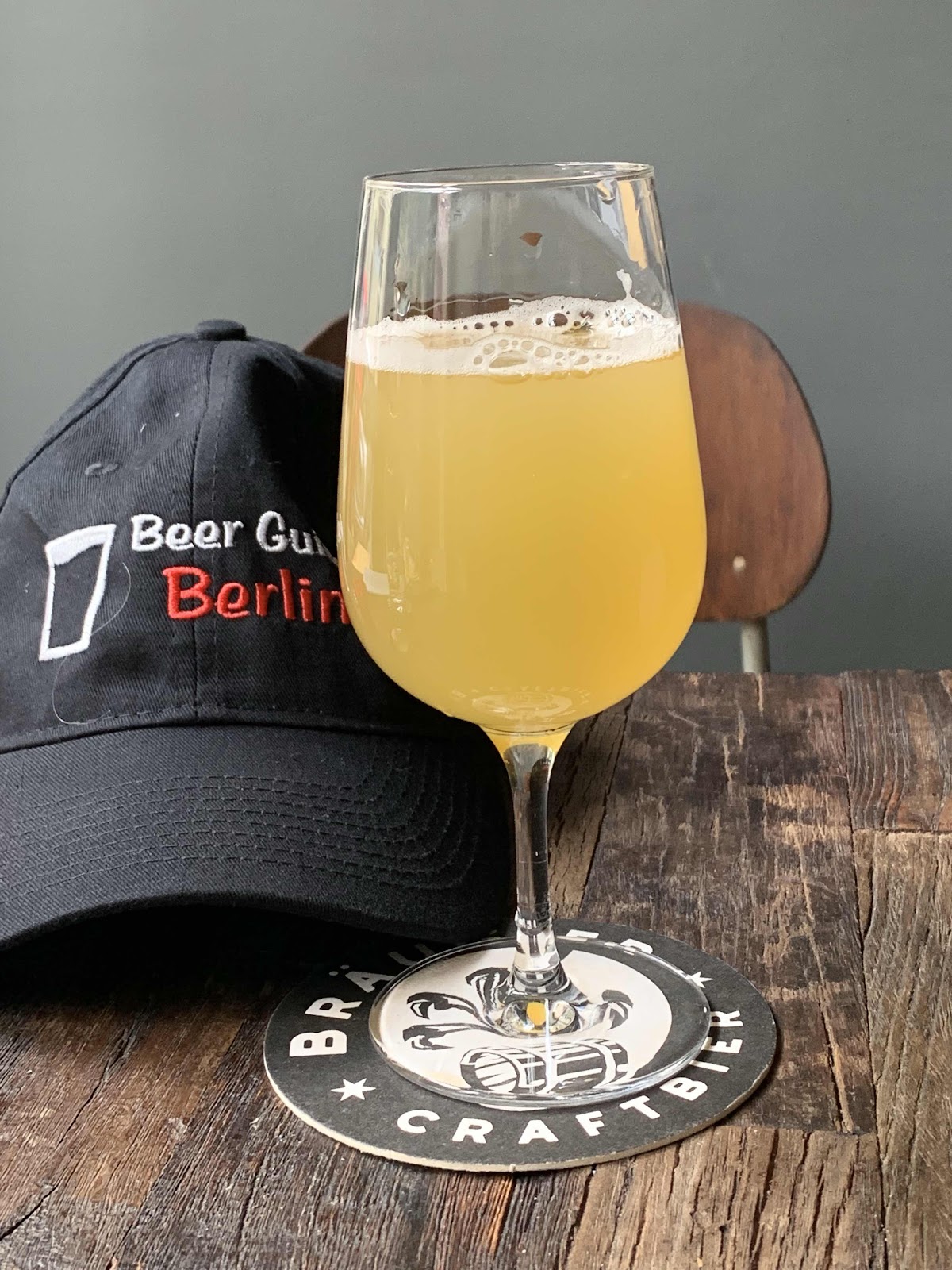 A couple blocks away was my next stop, Bryggeri Helsinki, a tap room of the Finnish brewery of the same name. I was actually uncertain if it was open because there had unrest over it. It turns out the Finnish owner reputedly had links to a neo-Nazi organization in Finland and that wasn’t going over that well (understandably) with some locals. 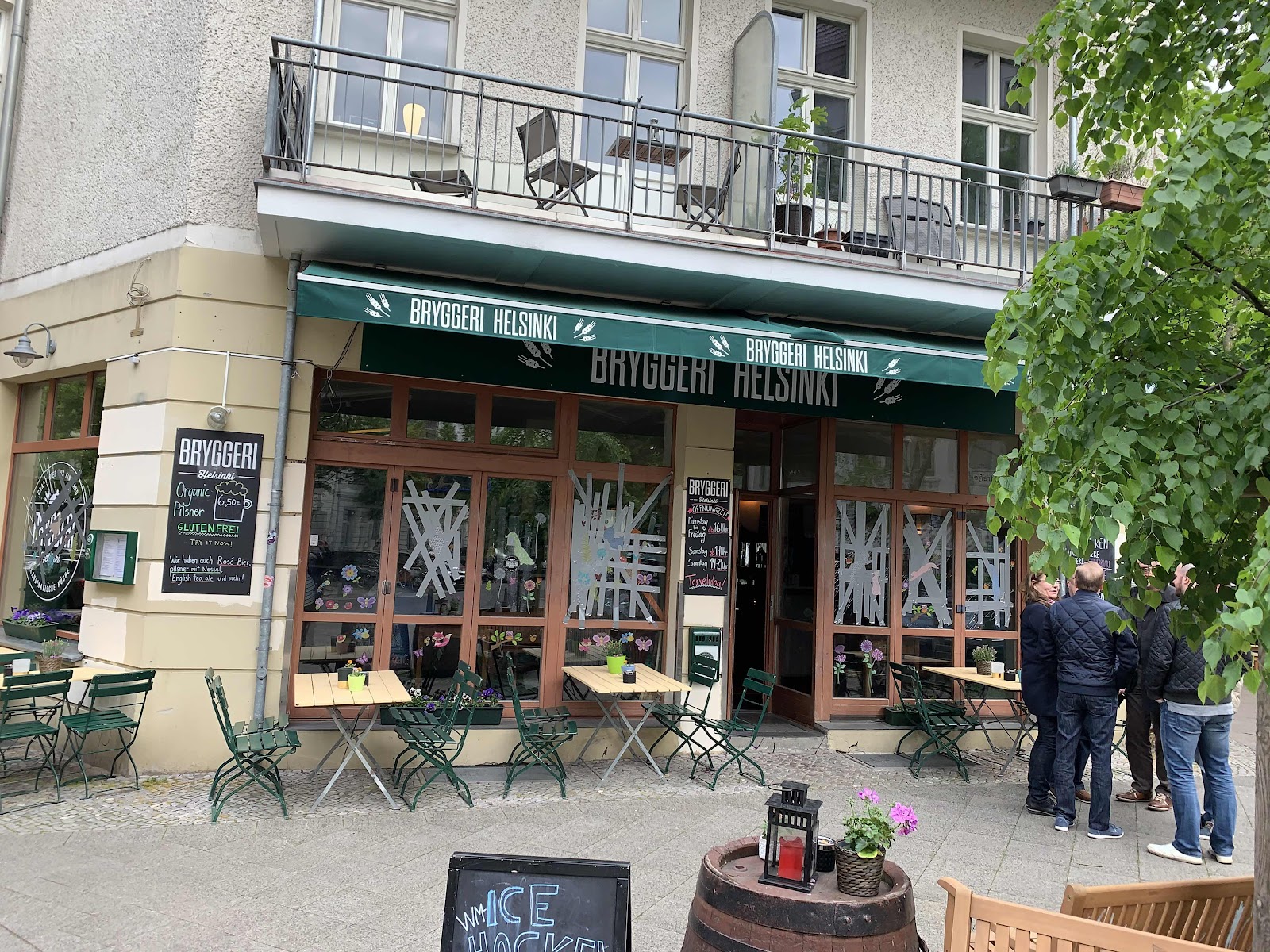 It looked like nearly every window in the place had been broken. They were open for business and while a little hesitant, I decided to try a beer. I chose the Pils... 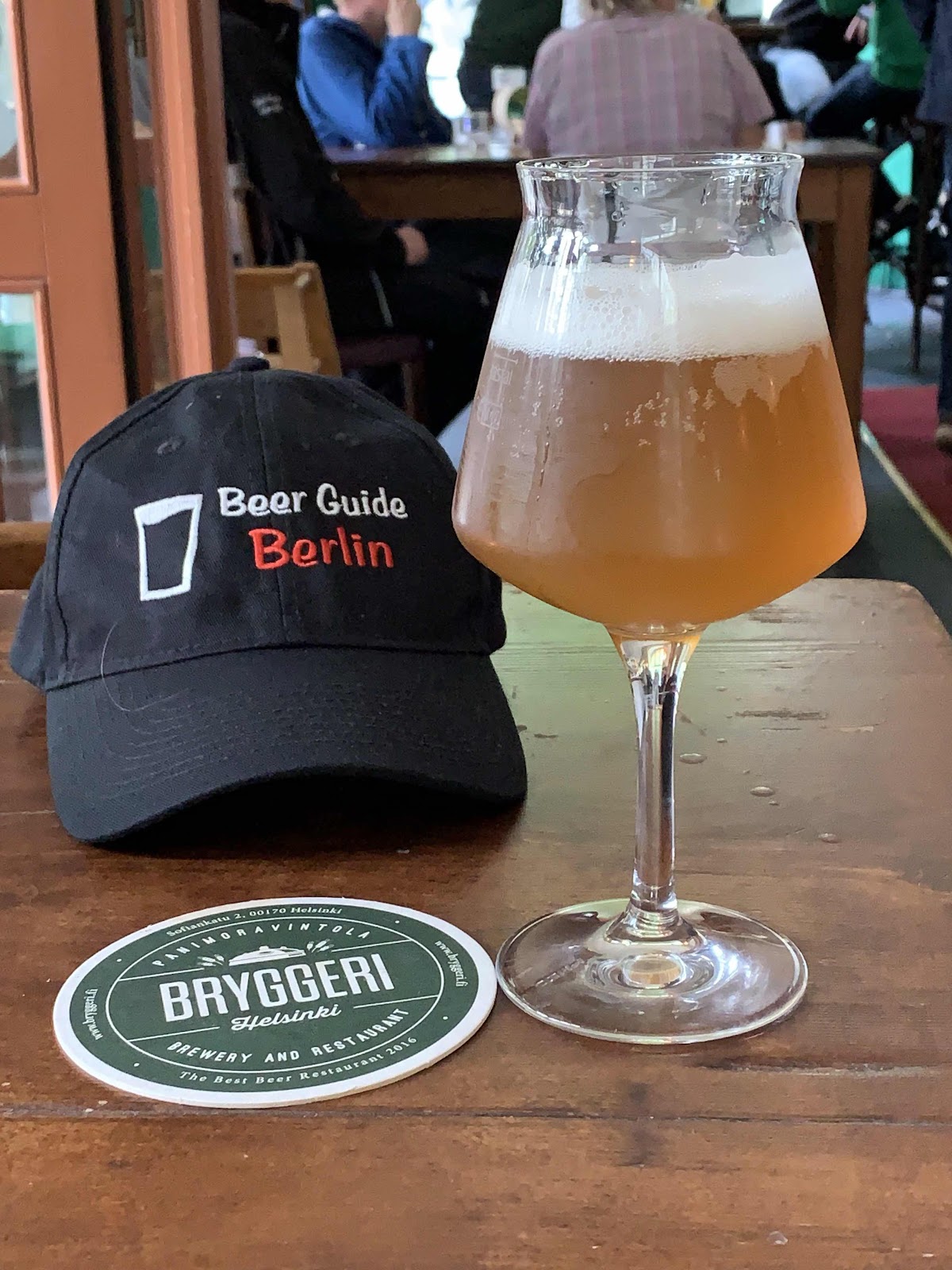 ...and the beer was about as clean as the glass. It was drinkable and I hesitate to draw a conclusion based on one beer but it won’t be high on my list for a return visit.
By now it was 6pm and I was not far from Birra, which specializes in Italian beers.

One of the original partners (I gather he may no longer be directly involved) is big fan of Franconian beers and every time I’d been their before they had a tap dedicated to them, usually from Brauerei Knoblach. No joy this time, but there were some kegs in the corner. 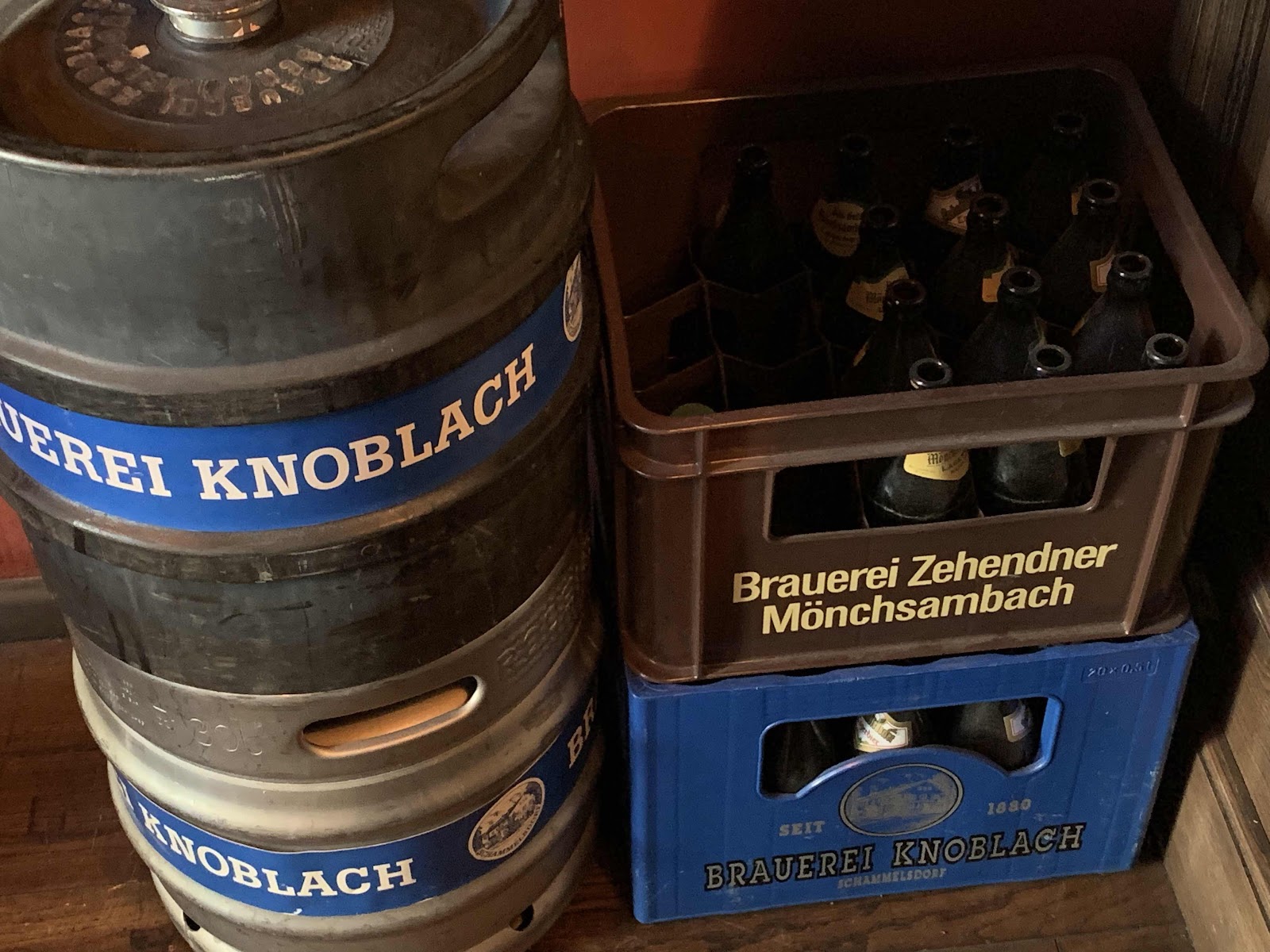 I went with the Eastside Brewing (yes, it is Italian) Bimbamia Hoppy Saison. 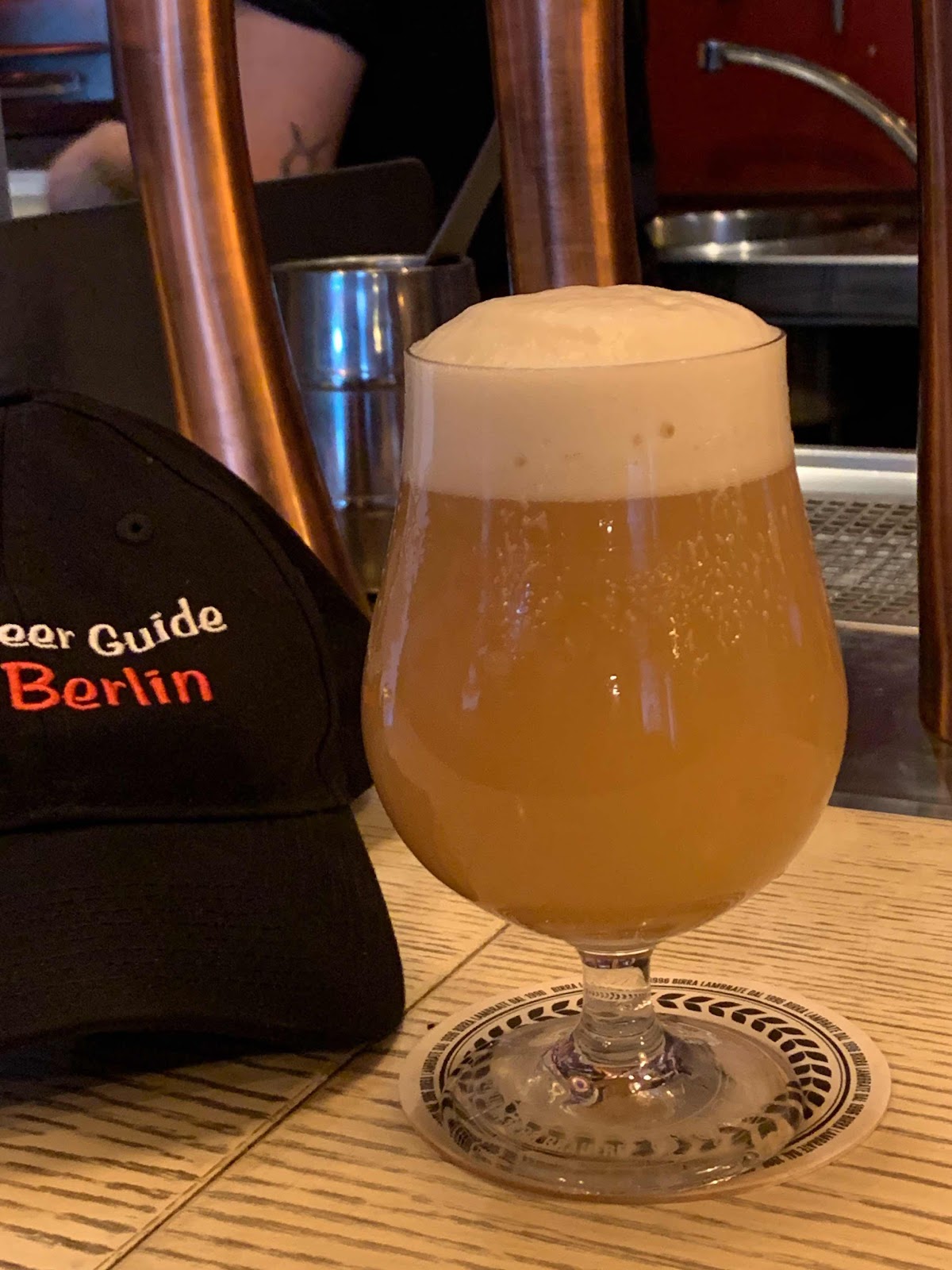 I got the next to the last glass before the keg kicked, so there was way to much yeast. But it was tasty. I was going to have another but jet lag was starting to kick in and there were still places to visit.
Around the corner from Birra is Monterey Bar which always has something interesting to drink. 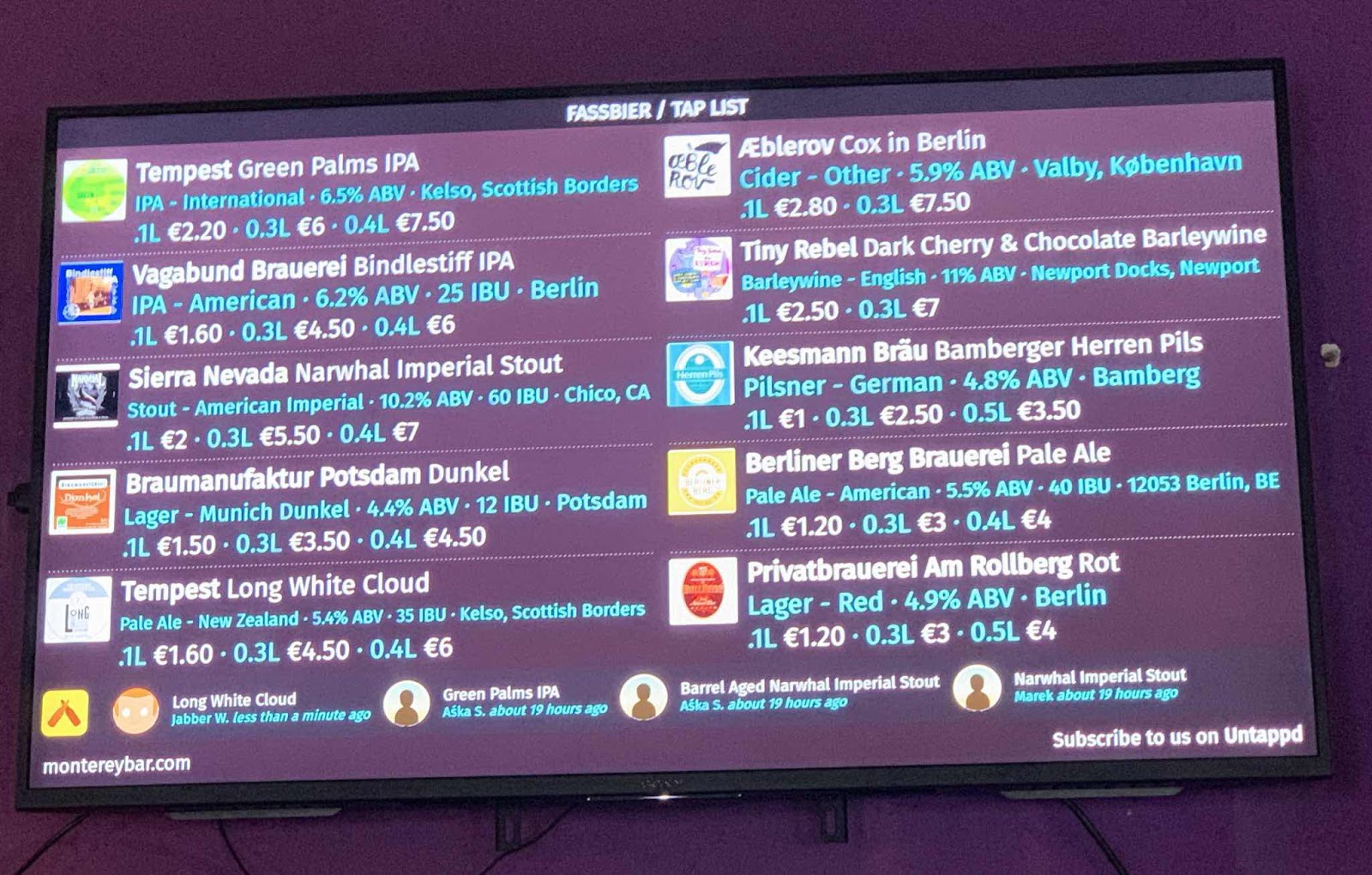 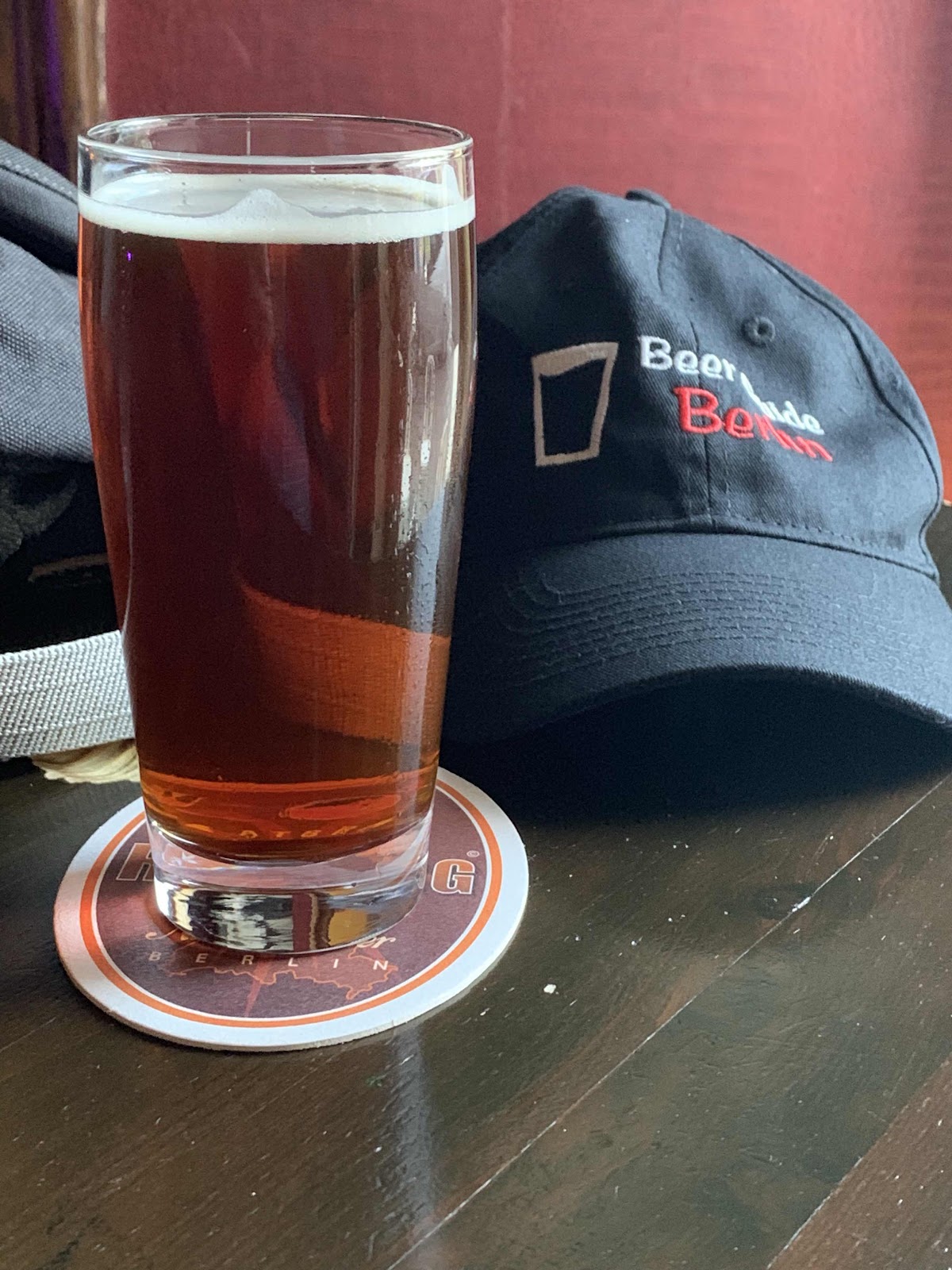 It was a little light for dunkel in my opinion— not enough toasty dark malts. And since it was low in bitterness there wasn’t enough going on to make me want another.  I decided to call it a night.
But wait — while changing trams I noticed 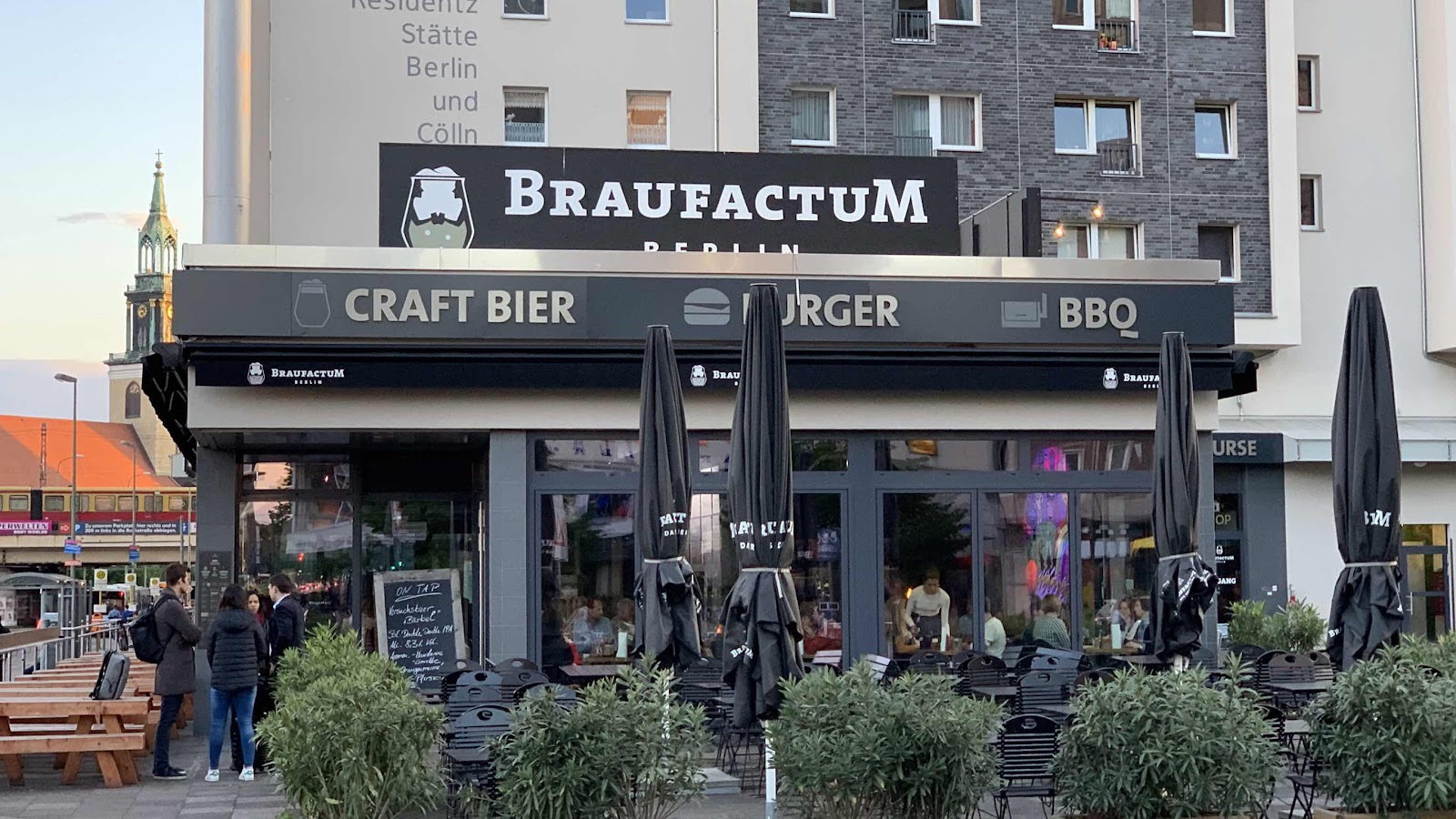 BraufactuM is the “craft beer” arm of the Radelberger Group. They had quite a selection of beers. 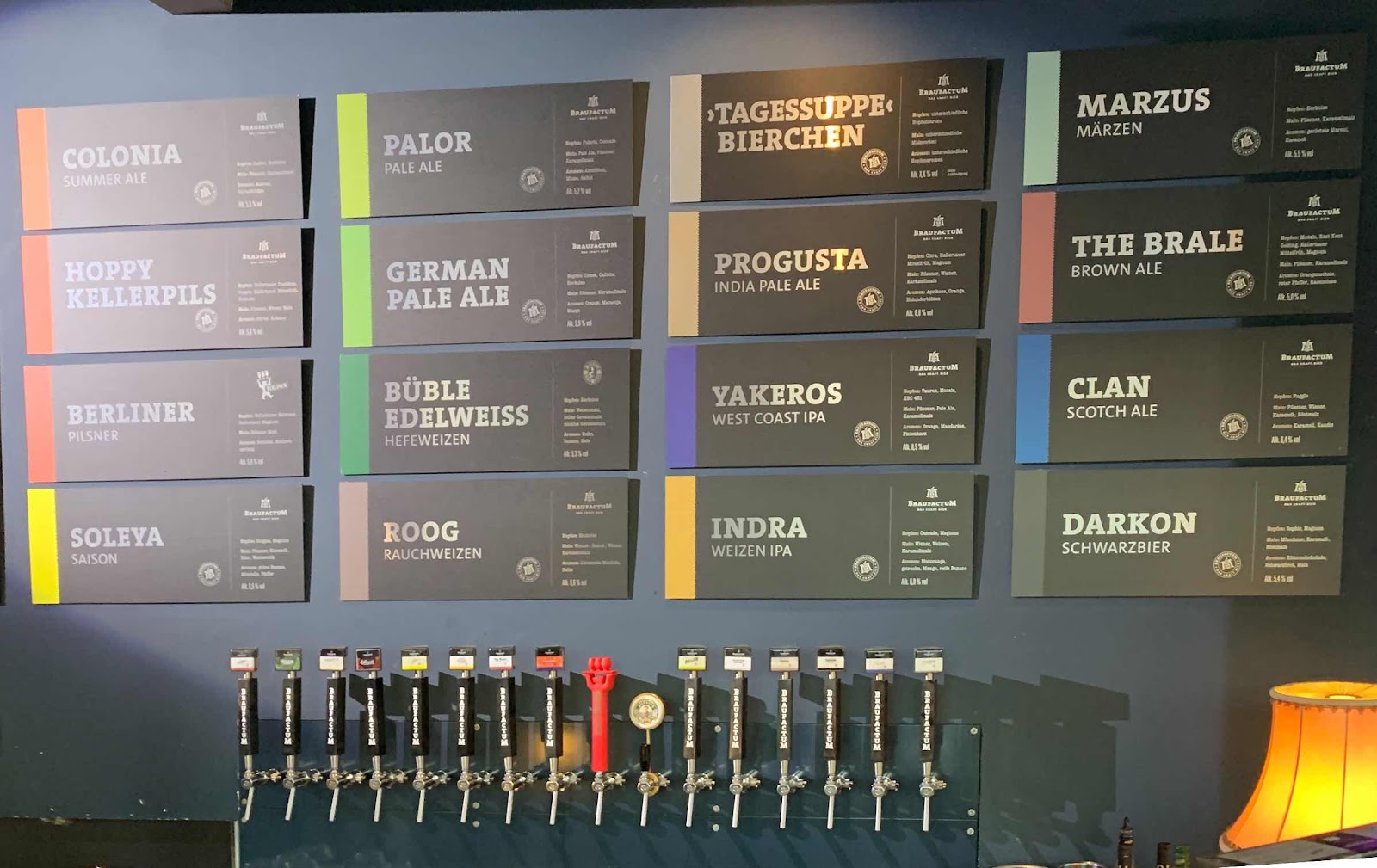 I chose the Hoppy Kellerpils 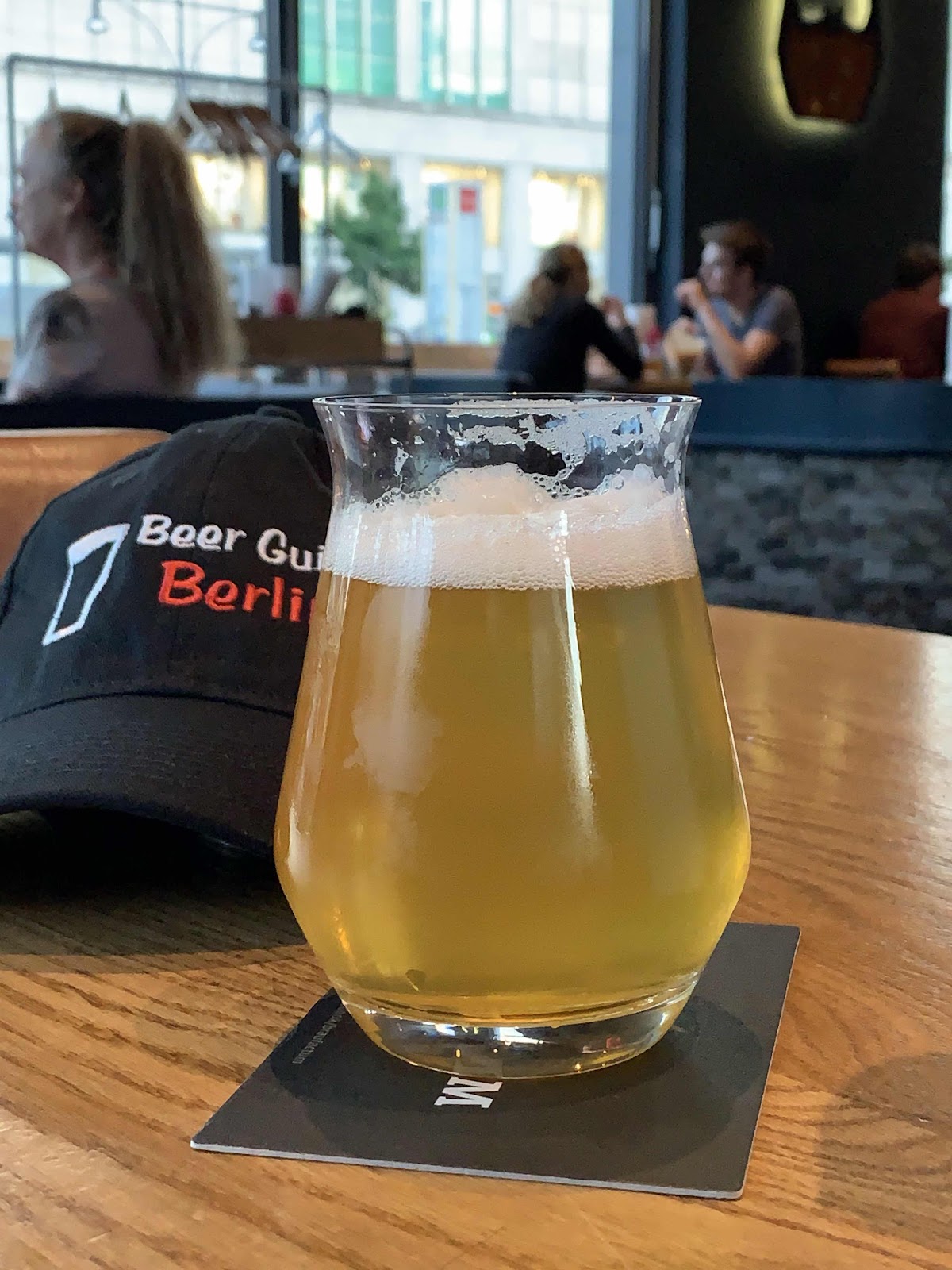 It was a perfectly drinkable beer. They have also taken over the former Das Meisterstück in Hauvogteiplatz so I may stop in there if I have time.
Then I did call it a night.
Posted by The Mad Brewer at 2:26 AM