Headed to my first stop, I passed the “Cheers Bar”, leading to the age old question, “Did Norm drink Kozel or Pilsner Urquell?” 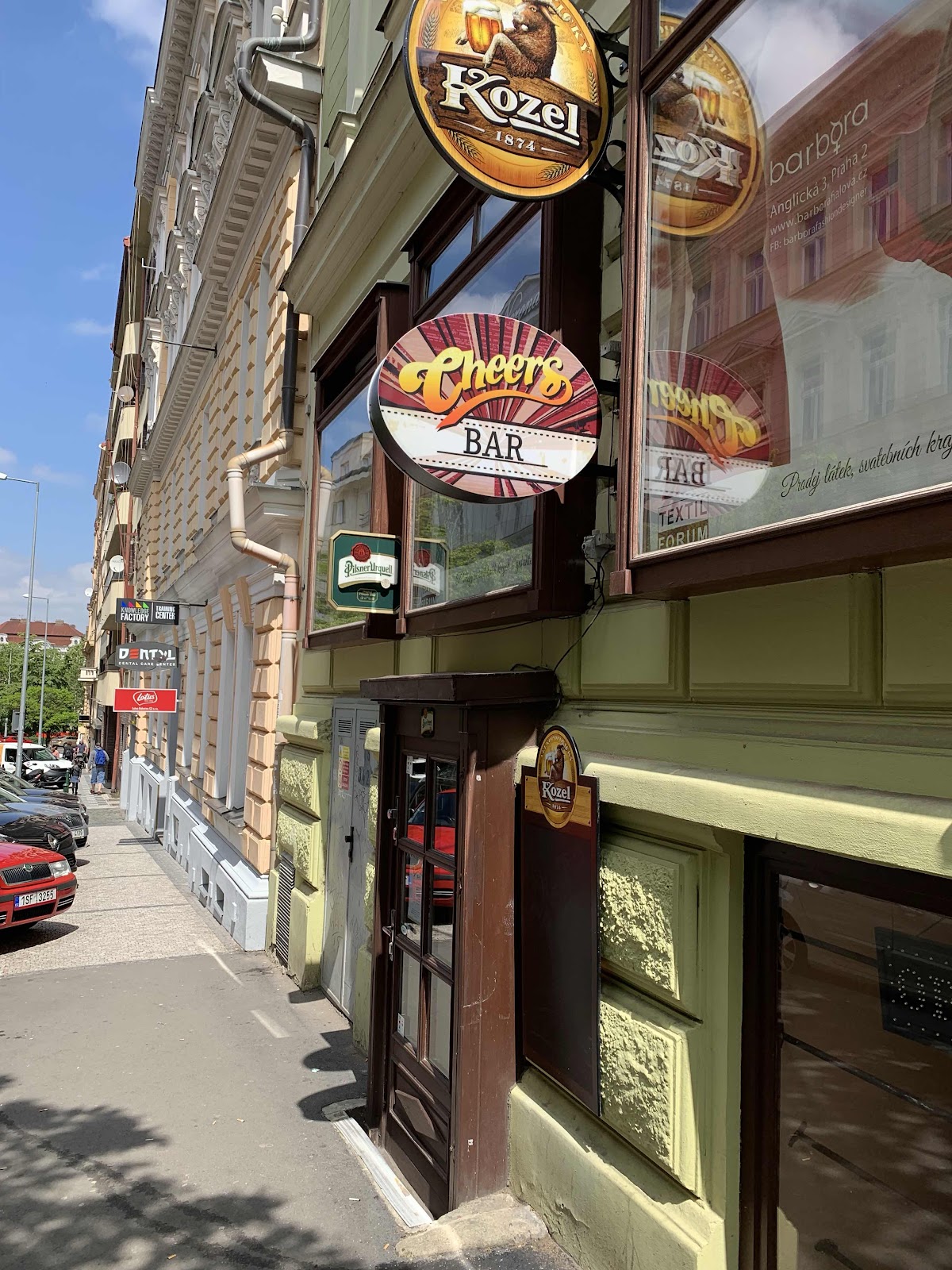 I was soon at Kaiser Franz Beer and Burger. These folks started out with stalls in various outdoor markets and graduated to their own place. 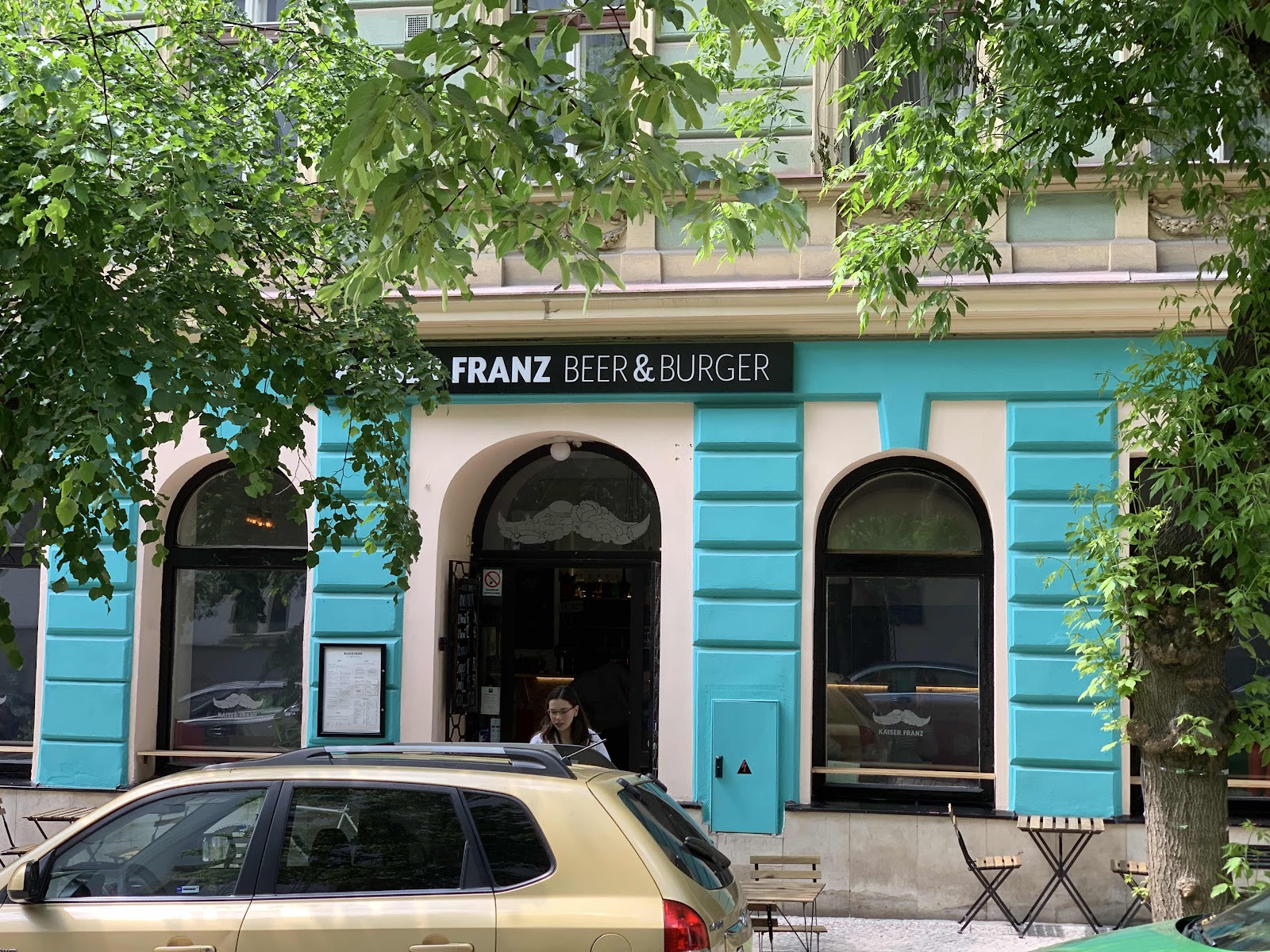 Six beers on draft. The two U Vacků are fixed, the others rotate. 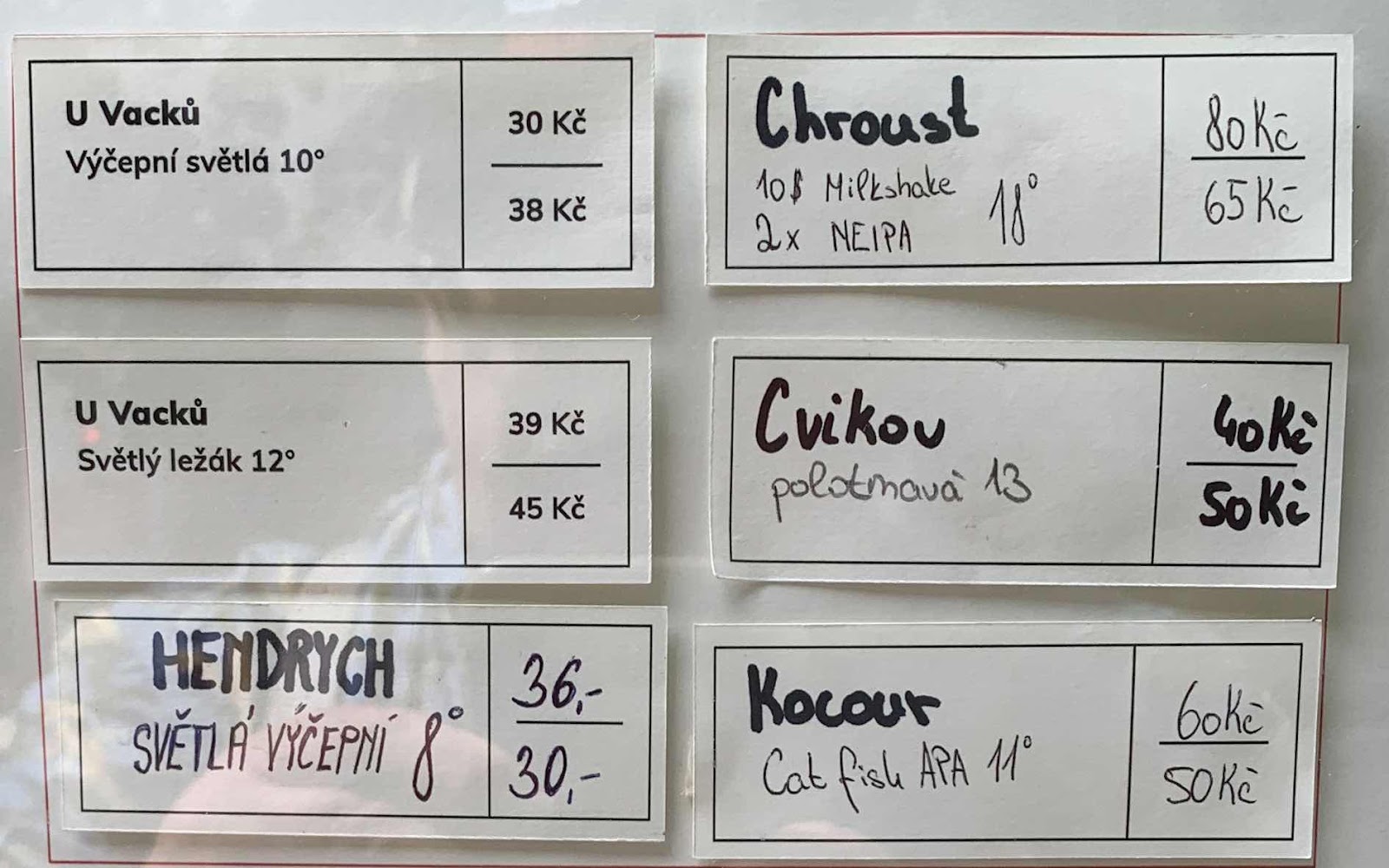 I was able to resist the Milkshake Double NEIPA and went for the opposite, the Hendrych 8º. I’m told in older days you saw lots of 8º beers around — works out to just over 3% abv but I can’t remember the last time I saw one in Prague. 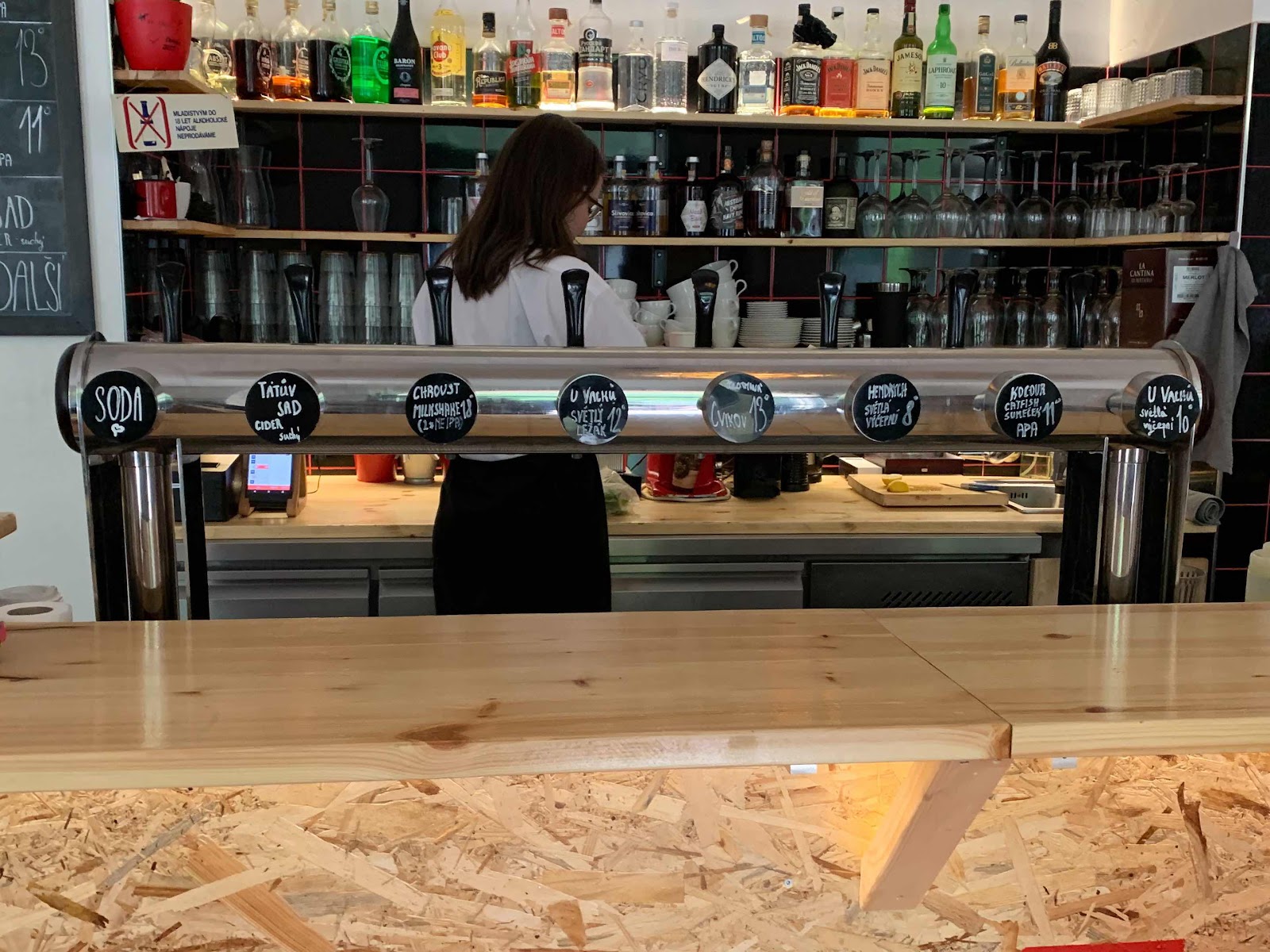 The first thing that hit me was the bitterness. Very clean, though. A little light in the body as you’d expect but the bitterness sort of made up for that. 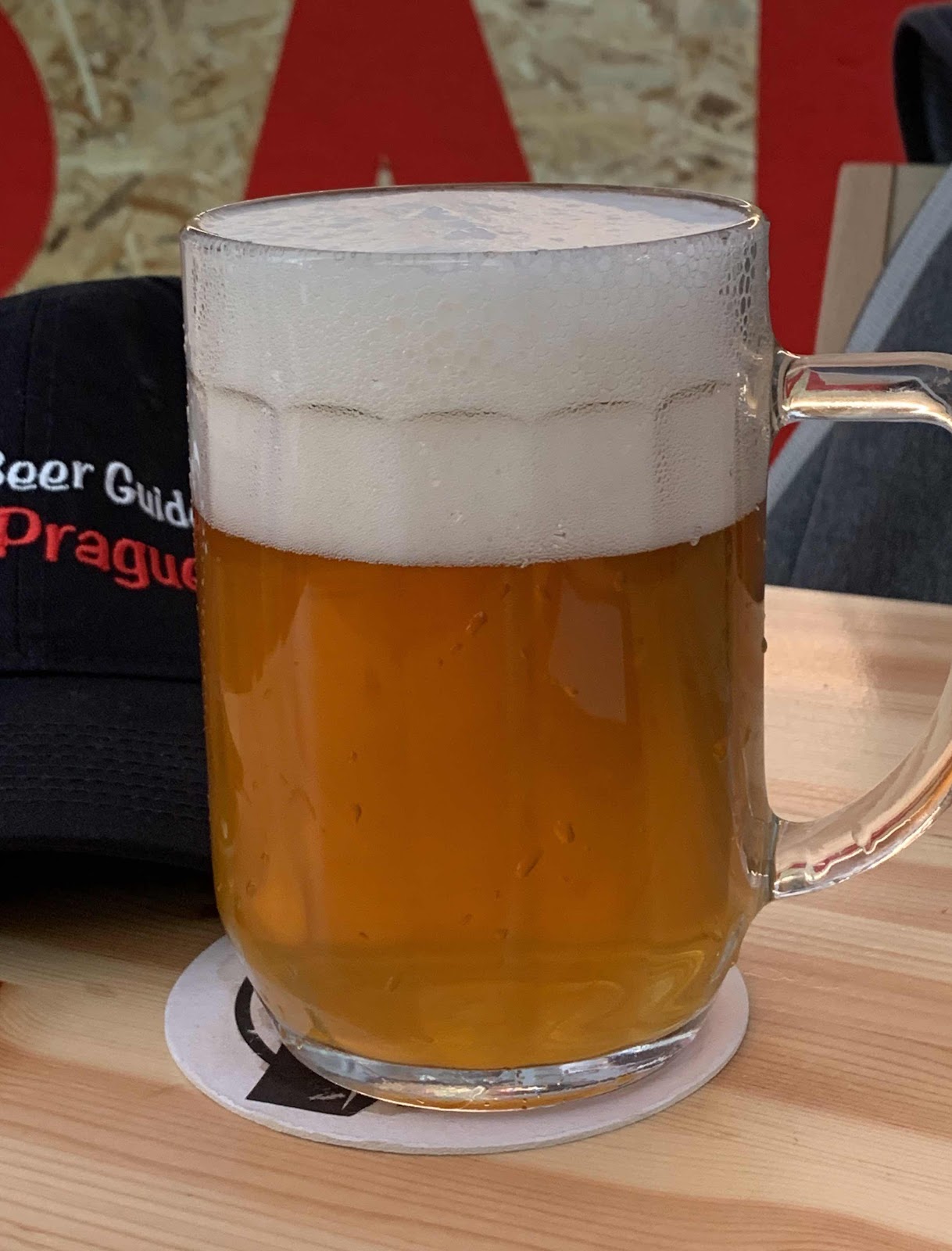 I decided to have lunch their and had their “experimental” burger — I guess each week (month?) they try something new and see how customers like it. This wasn’t a burger exactly. Take a rouladen and slice it and put it on a but with burger fixings and that’s about what you have. I liked it. 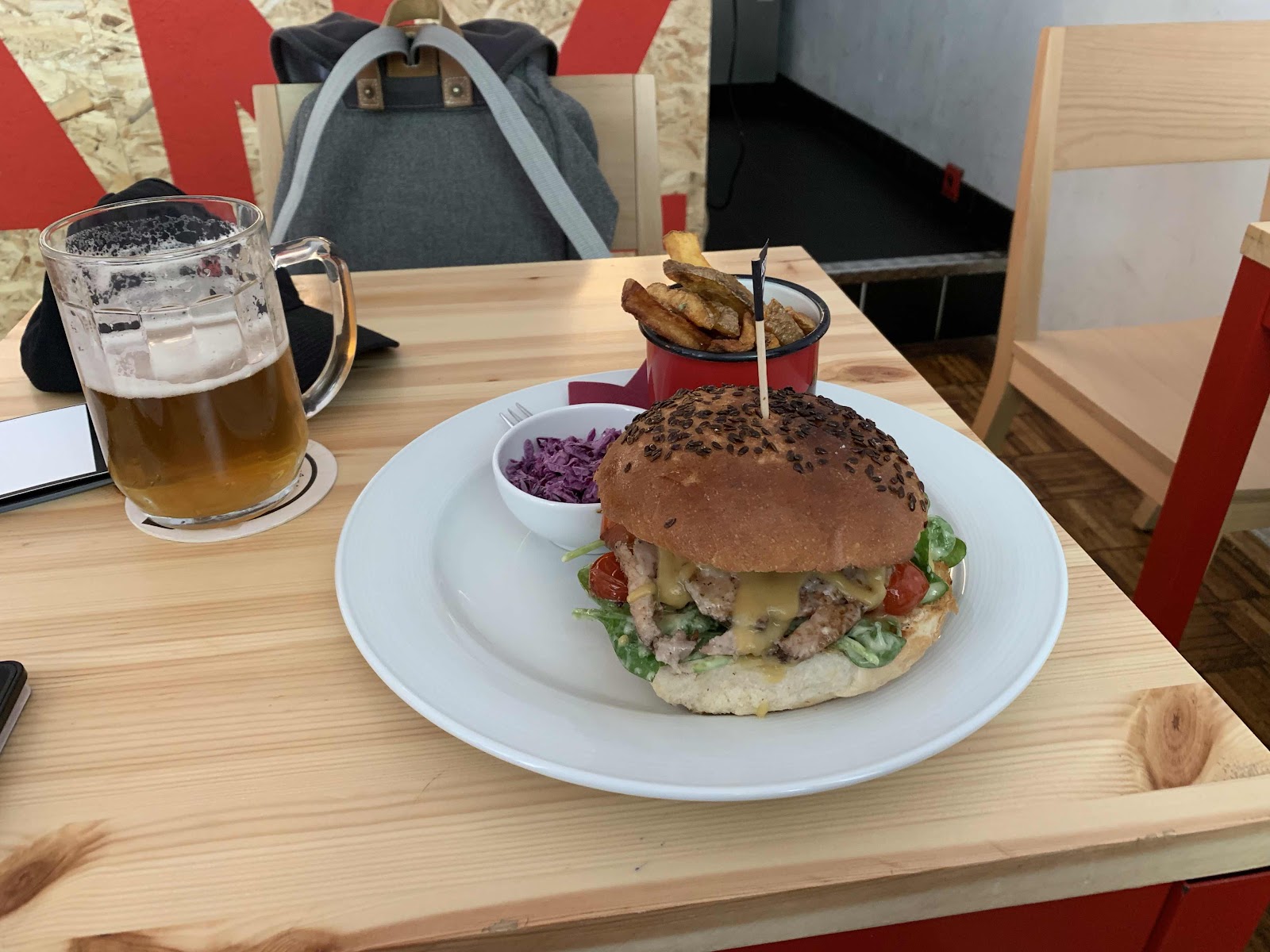 In the meantime I had another Hendrych 8º. I really like that beer.
A couple blocks away is a place a friend recommended. They describe themselves as a “literary cafe.” There are books all over (to read, to borrow or to buy) and sort of decorated like you might find a rich person’s library. The food is vegetarian (which is why my friend likes it). 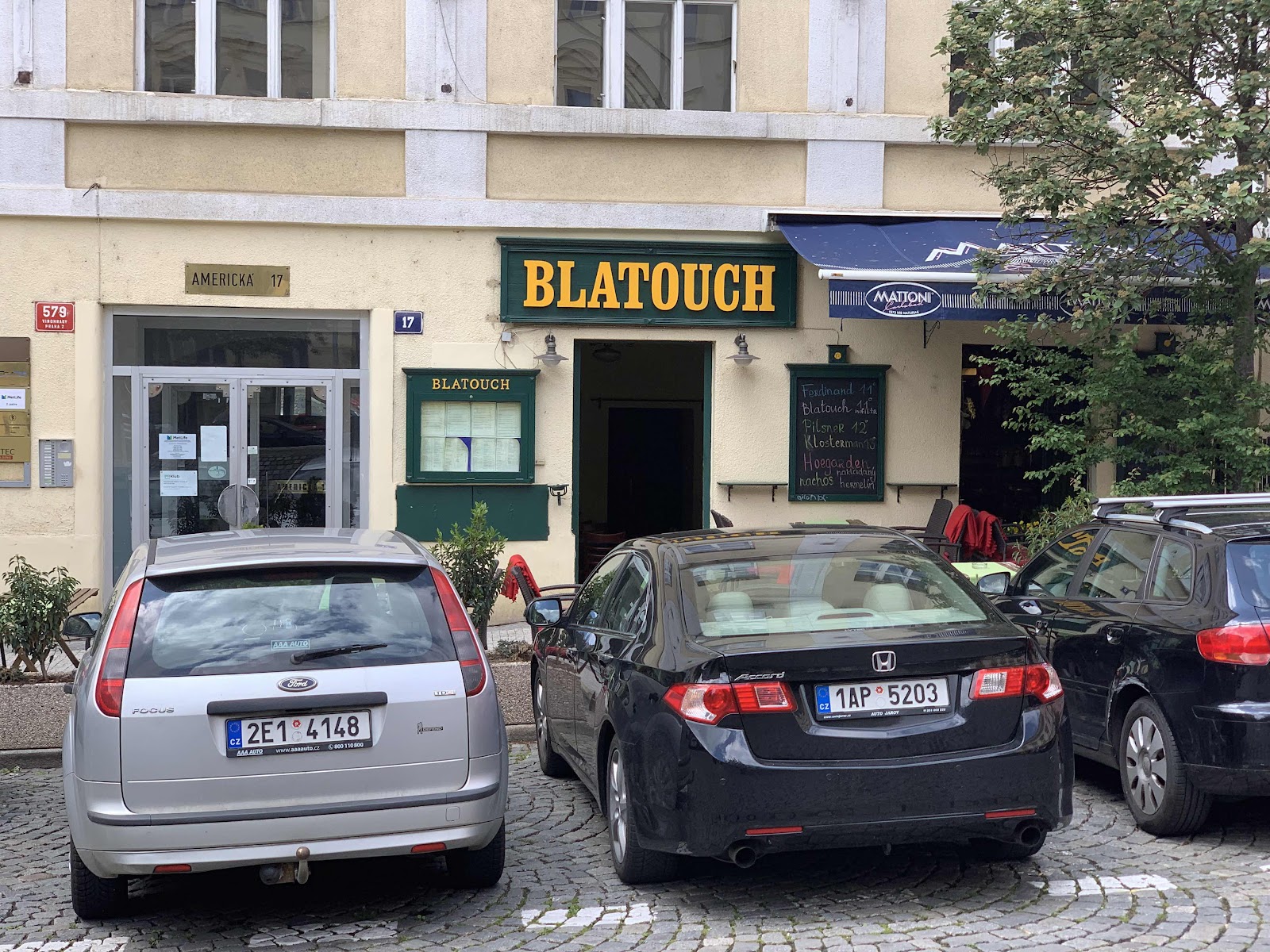 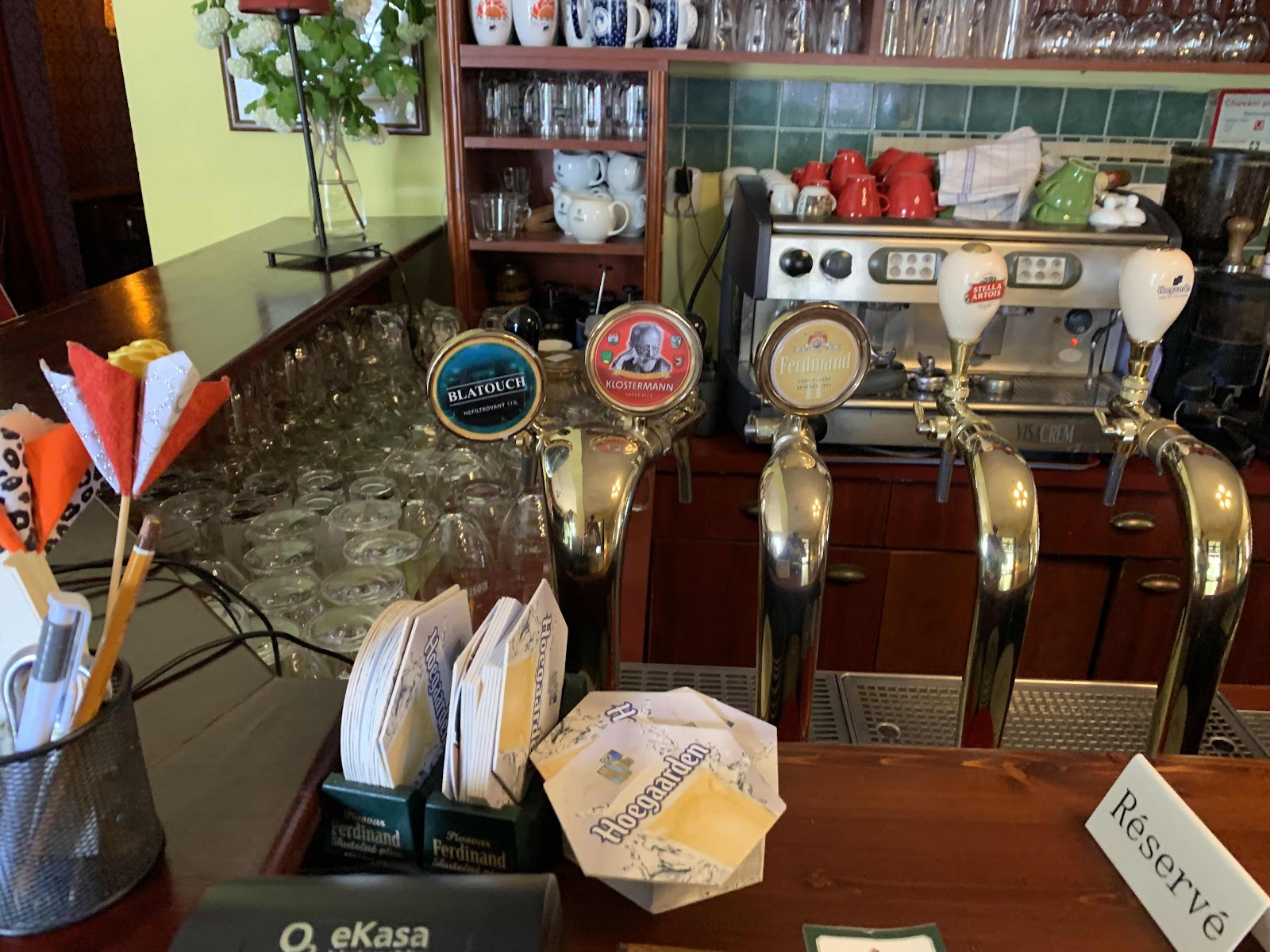 Their house beer is brewed by Strakonice and I ordered one. It was undrinkable. I asked the bartender if it was the first beer of the day and she said yes, and would I like a replacement. I did. 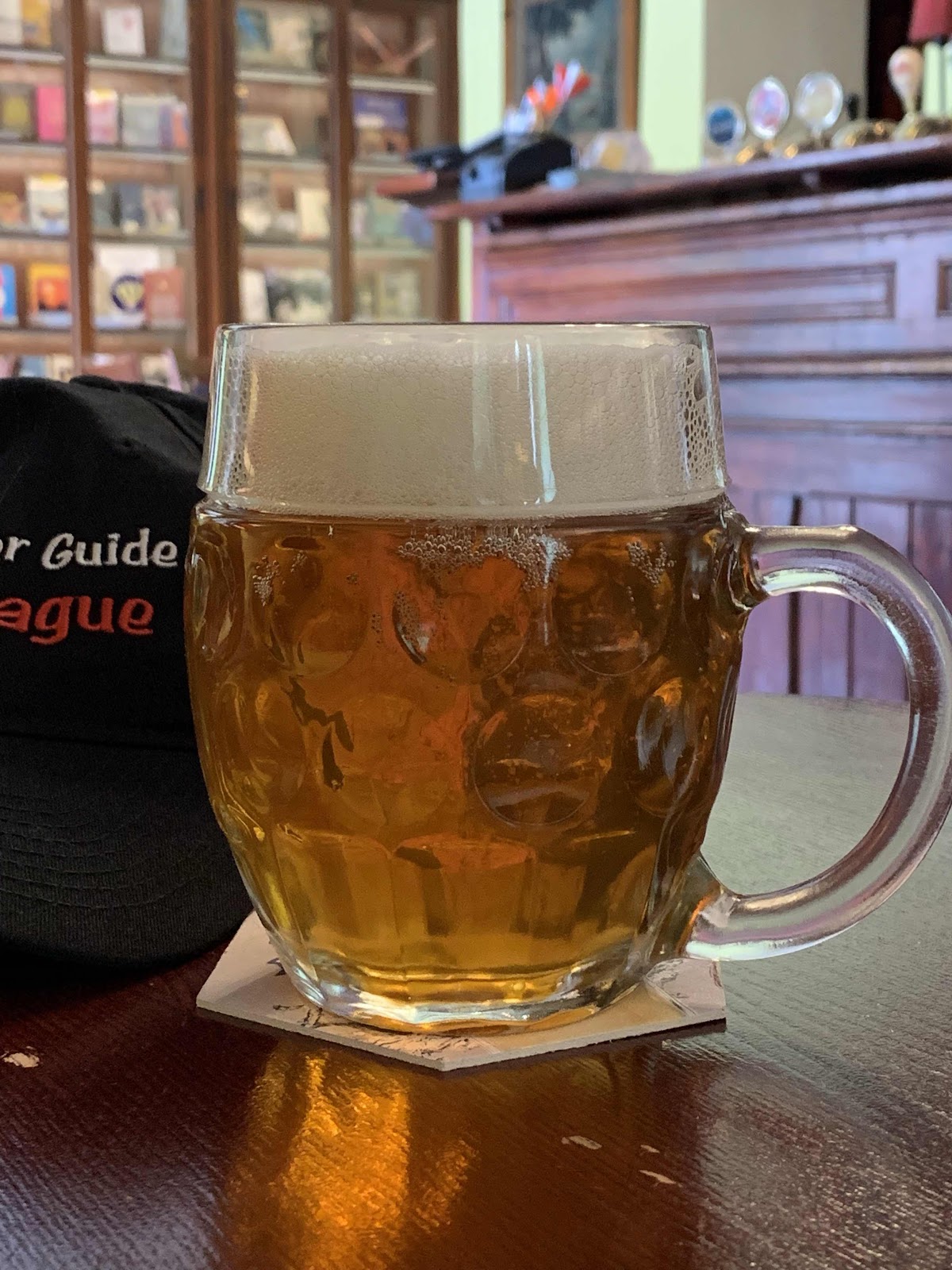 The replacement was better but still a bit too vinegary. I finished it, but it was hard. In someways the system were you pay first is better because then I could have snuck out while she was in the back room. I am a chicken, don’t like to make scenes. What is interesting is my friend happened to stop by in the evening and said the beer was fine. So I guess they need at least two beers to flush the lines. The people who came after me owe me a beer. And Blatouch needs to clean their beer lines.
It was the first warm sunny day so I decided to visit a new beer garden. It is about a 30 minute ride on the number 16 tram. You come to an old industrial park that is being re-purposed at an art space — and also Permanent Beer Fest.
You can’t really see much from the entrance to the park. 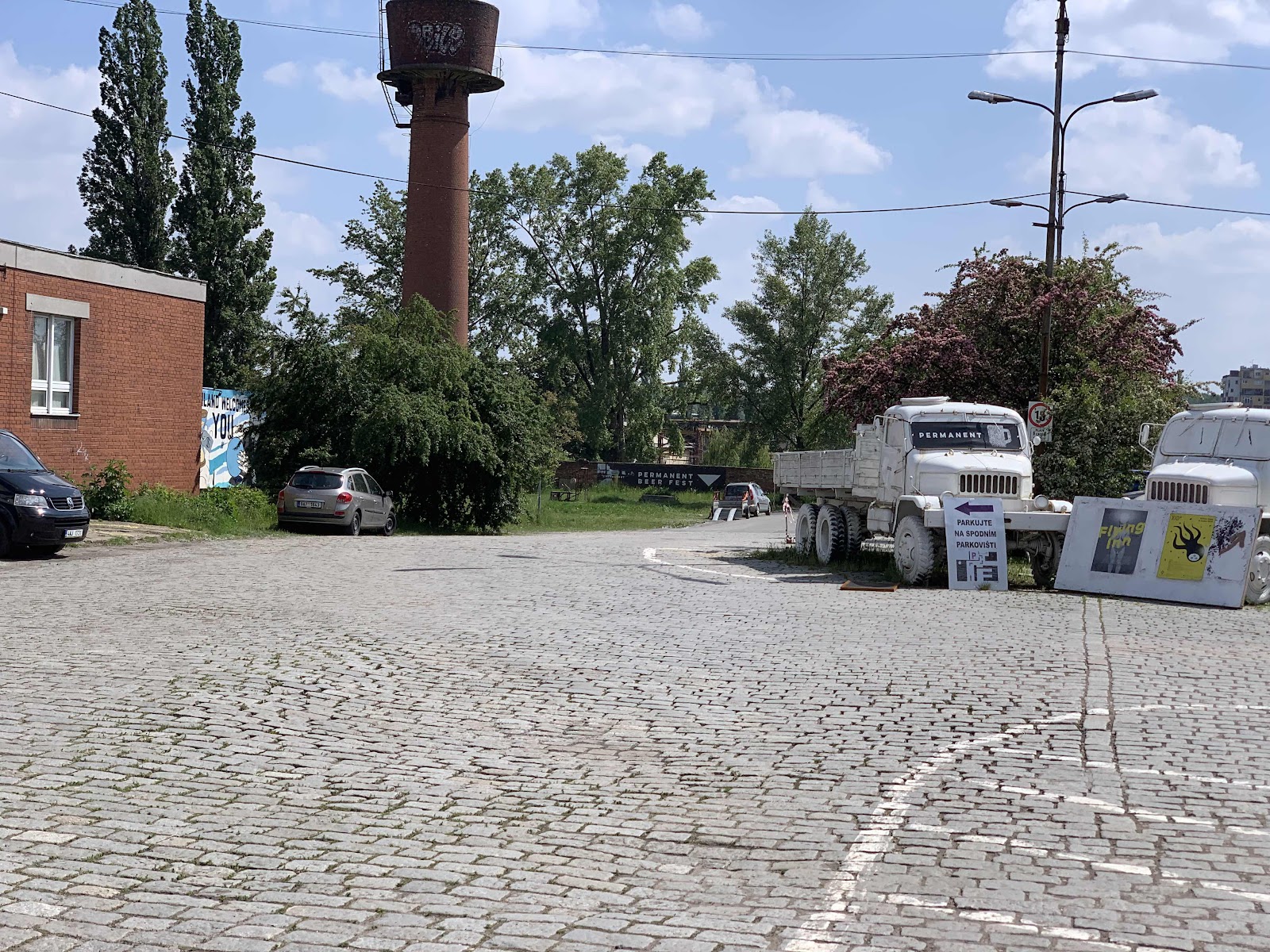 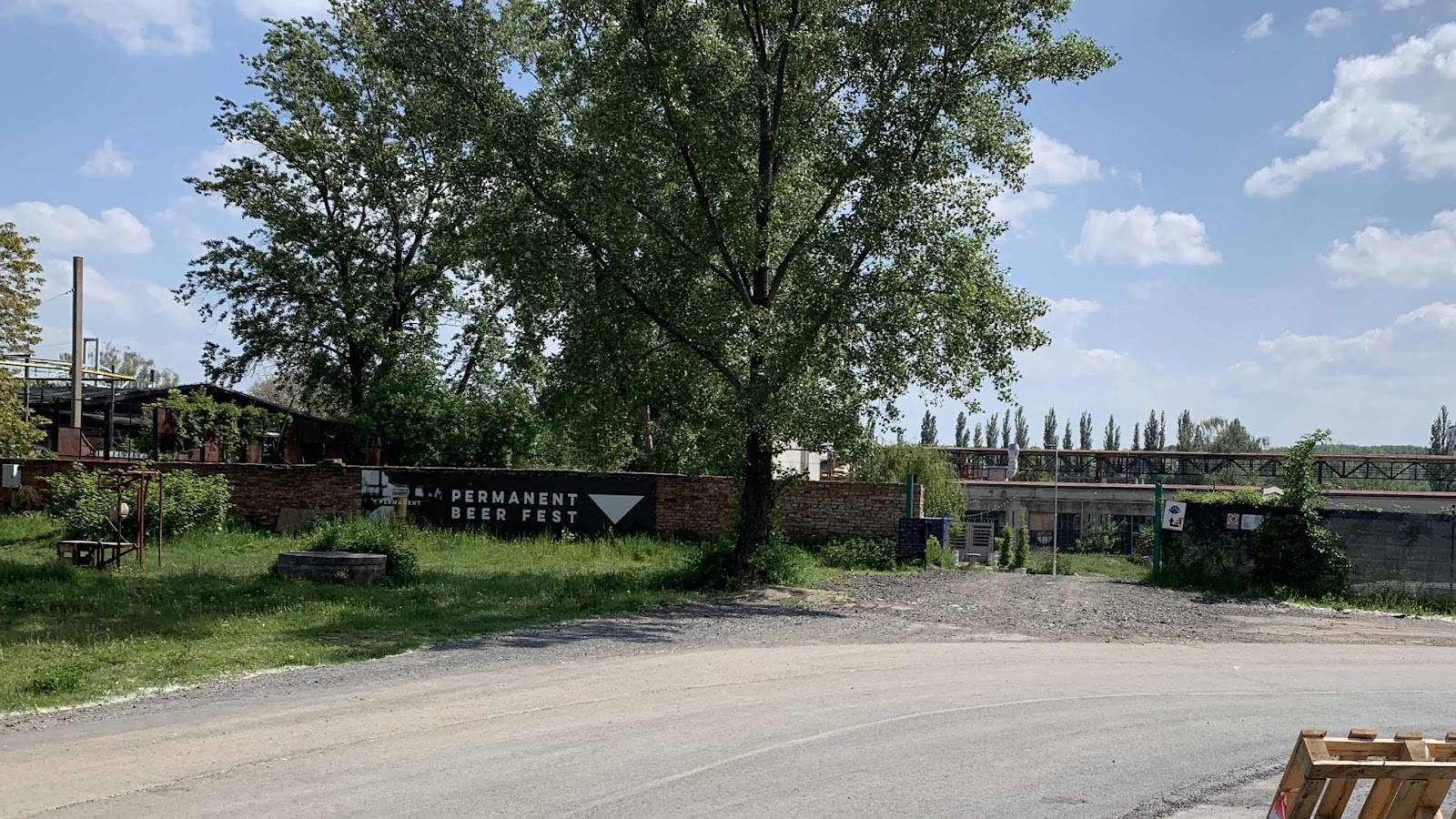 And then you come to the beer garden itself. 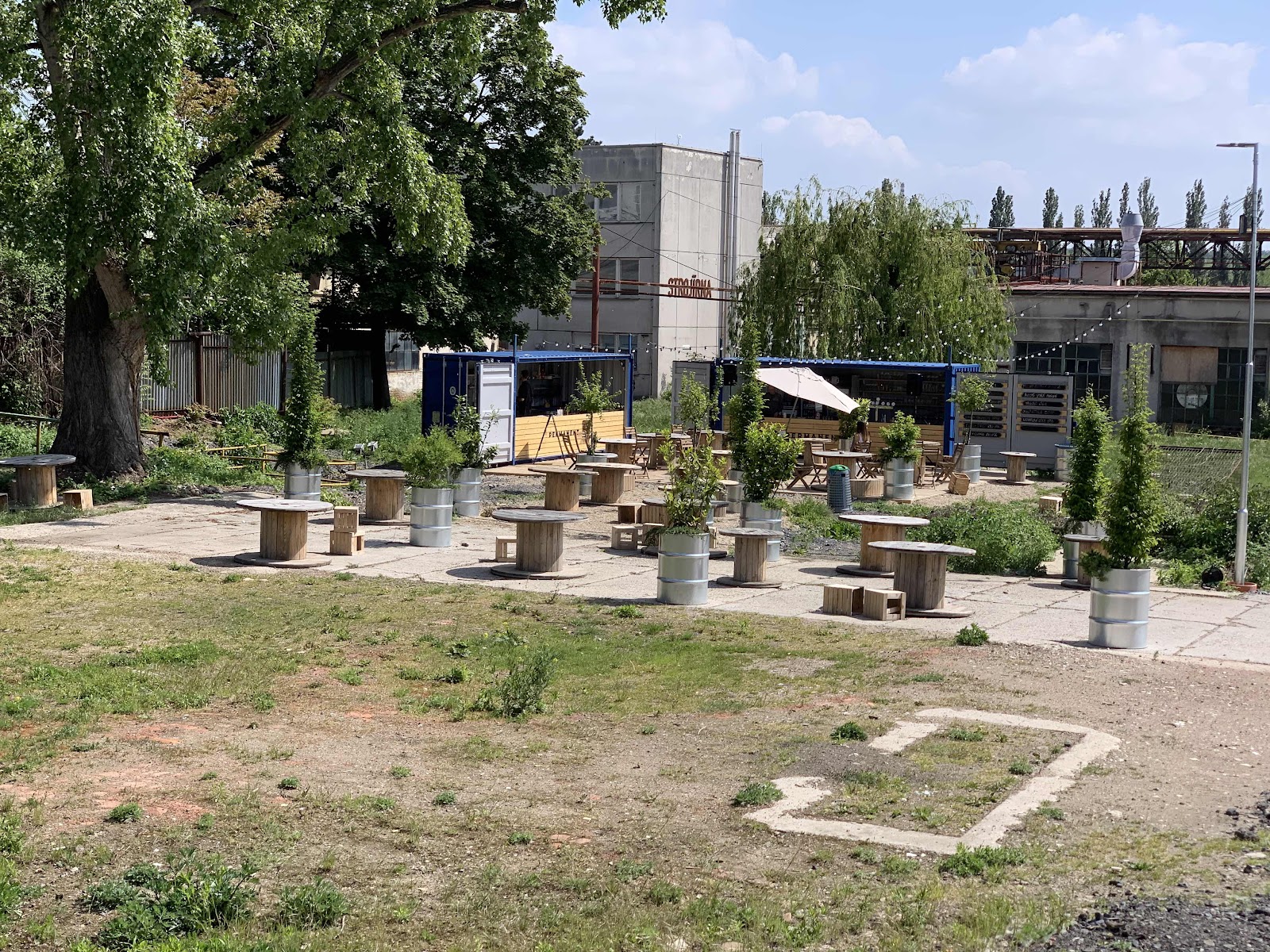 “Garden” is maybe the wrong word, it is industrial not rural. As soon as I set my backpack down a guy came out and put up a shade umbrella. 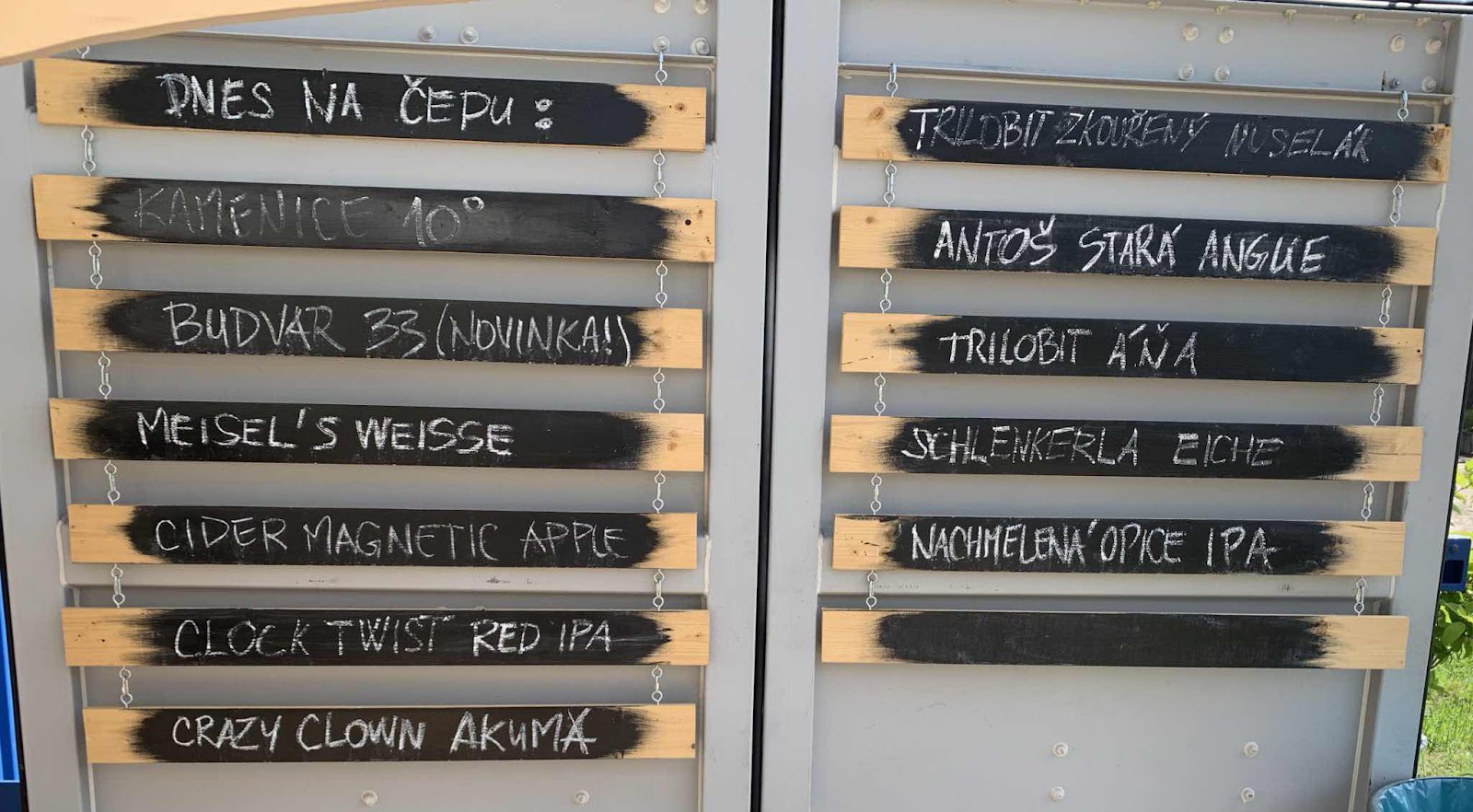 They have twelve taps but one was dry today. My eye was drawn to the Schlenkerla Eiche but that is not really a beer to drink while sitting in the hot sun. I told the bartender/manager how I liked that but not today and he told me one of the Trilobit beers was a rauchbier so I ordered it. 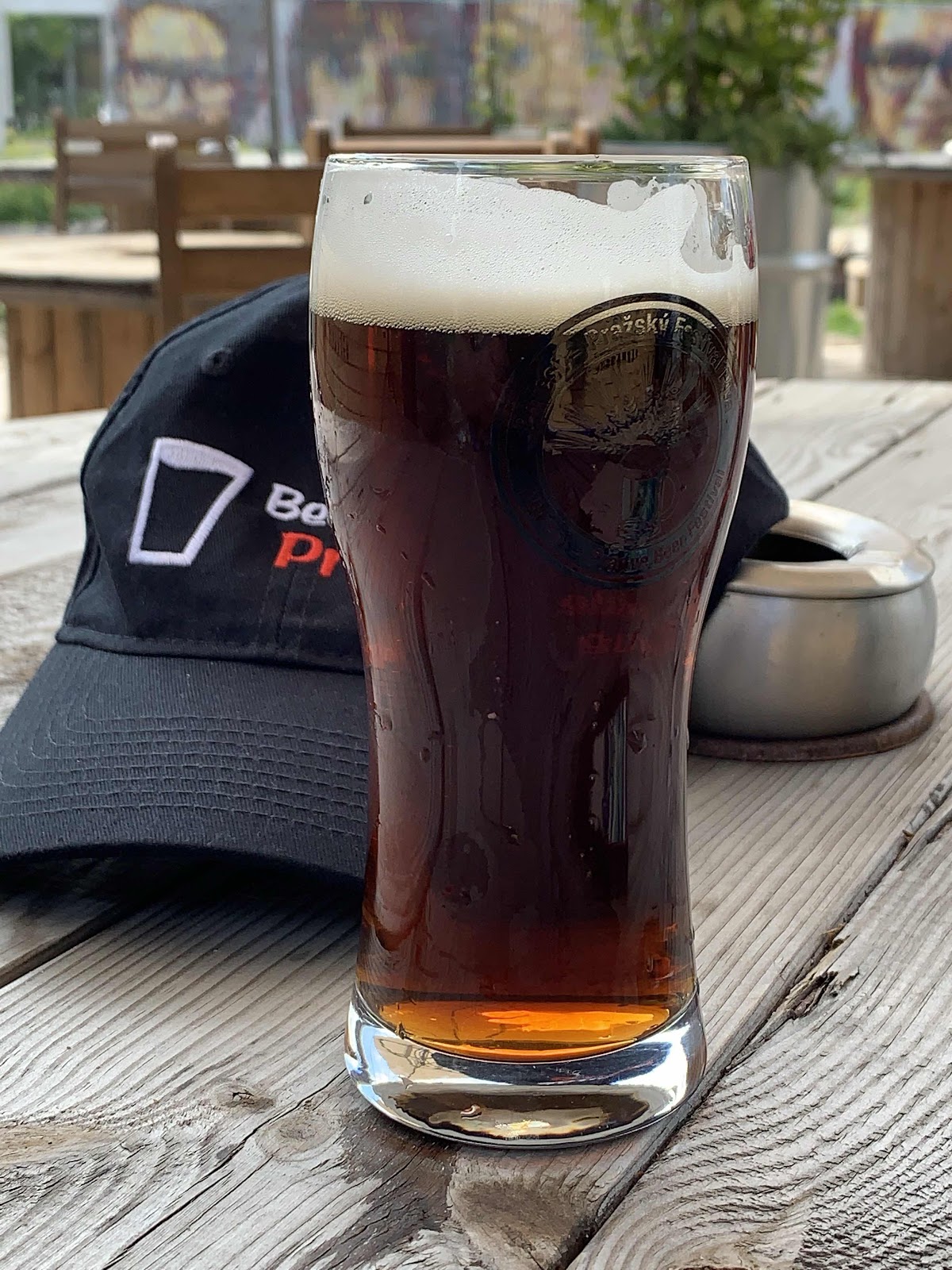 This is Trilobit Zkouřneý Nuselák 13º. It was nice but it had a bit of the medicinal phenol I get with beer made with too much Weyermann Rauchmalz. I liked it, but I didn’t want another.
I decided to stay with Trilobit and had their Aňa IPA — supposedly named after a new baby in the family. BTW, the proper Czech pronunciation for these beers are “ee-pah”, “nee-pah” and “ah-paw” — being IPA, NEIPA and APA. I am not making fun, just observing. And considering how badly Americans (and yes you Brits too) have mangled foreign words it would be hypocritical of me to do so. 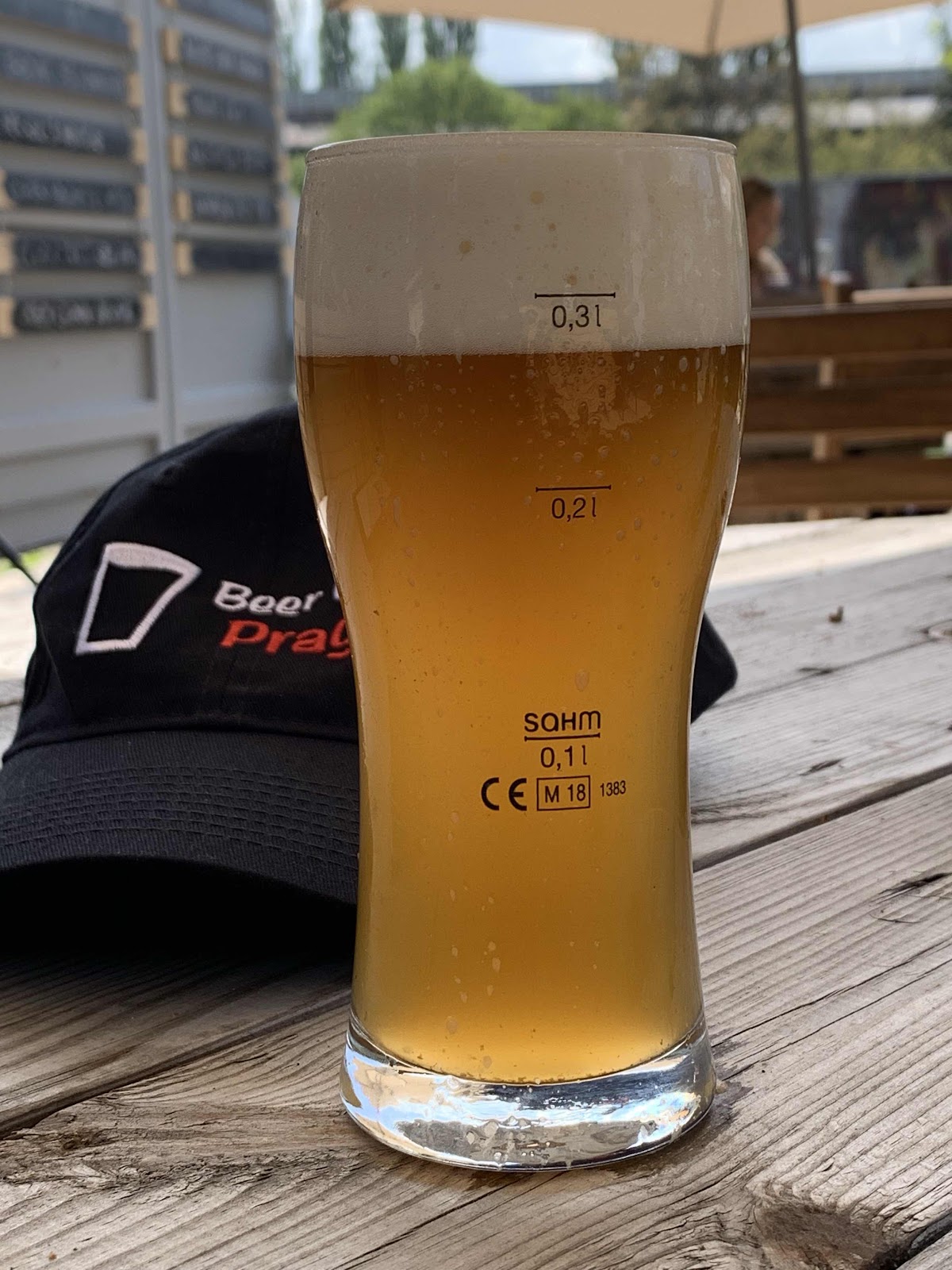 The manger was a home brewer and offered to open one of his NEIPA but I passed saying I would only drink a taste. He told me a familiar story, how he liked to bottle in swing top bottles and they were hard to find. His is originally from near the German border and when he goes back to visit family he goes to a small Bavarian brewery that still uses them and buy a case and whatever empties they will sell him. Back when started homebrewing I used to buy whatever Mexican beer was on sale just for the bottles. I used the beer in cooking and rinsing equipment and whenever a (soon to be ex-) friend would have “don’t you hav any real beer” when offered a bottle of home brew.
The manager also complained about the cost of American/New Zealand hops. I told him we do the same about Czech hops. I think he was about to offer a business arrangement but I don’t want to travel internationally with bags of green leafy material.
I wasn’t sure how often the trams ran on Saturday so I decided to head back. I got off at Naměstí Míru and wander over to Vyčep na stojáka, a totally standing bar based in Brno. The rumor was true, they have closed. Part of me is not surprised — I could see how a small place with 20-30 standing places might work in the right location but this place was huge — maybe room for 300-400 people standing.  That is a lot of rent.
As I was walking back towards my hotel I past close to NUBEERBAR (they spell it all caps). 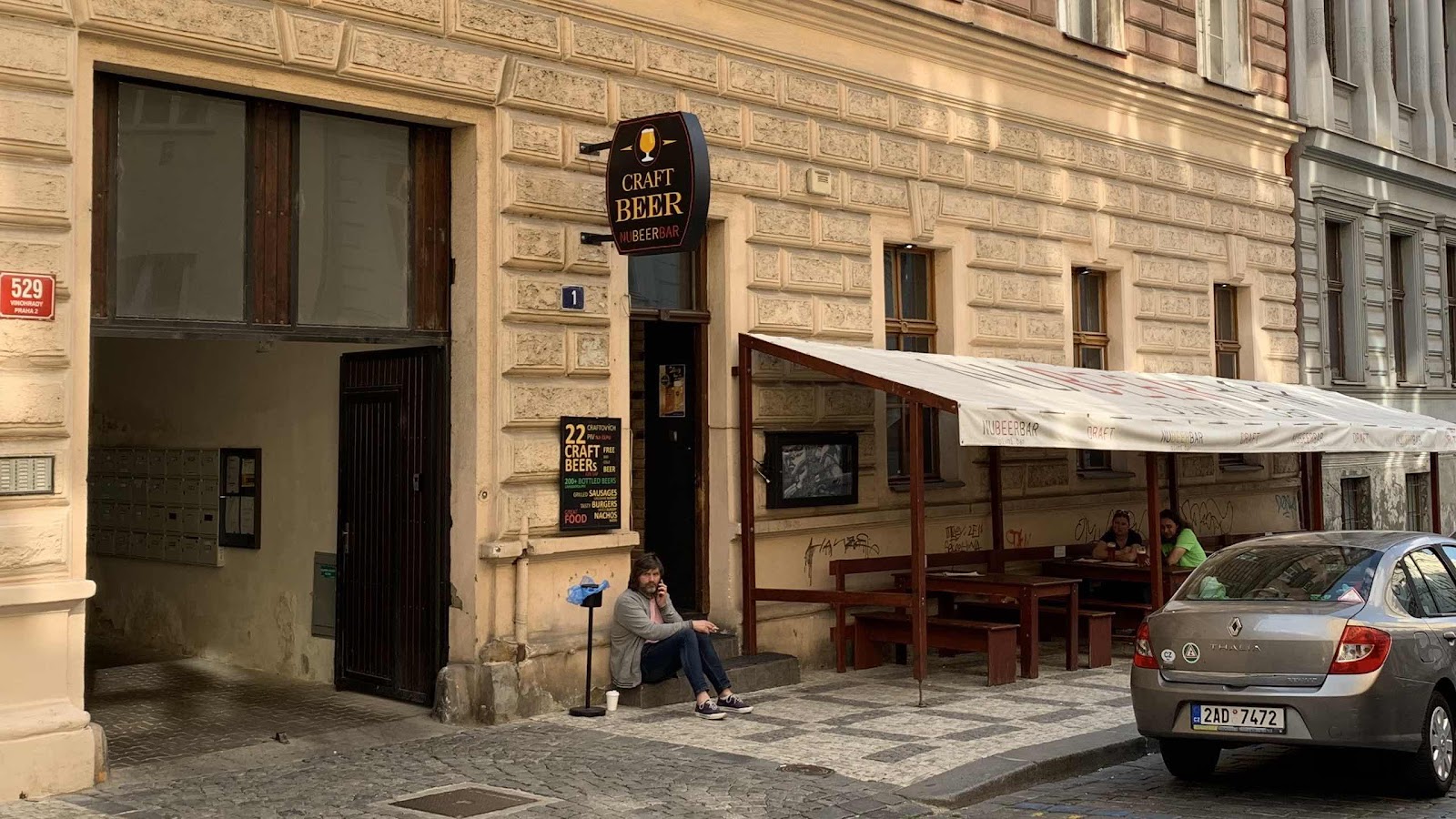 They have 22 taps with a mix of traditional and modern styles. They have added food since I was last there. 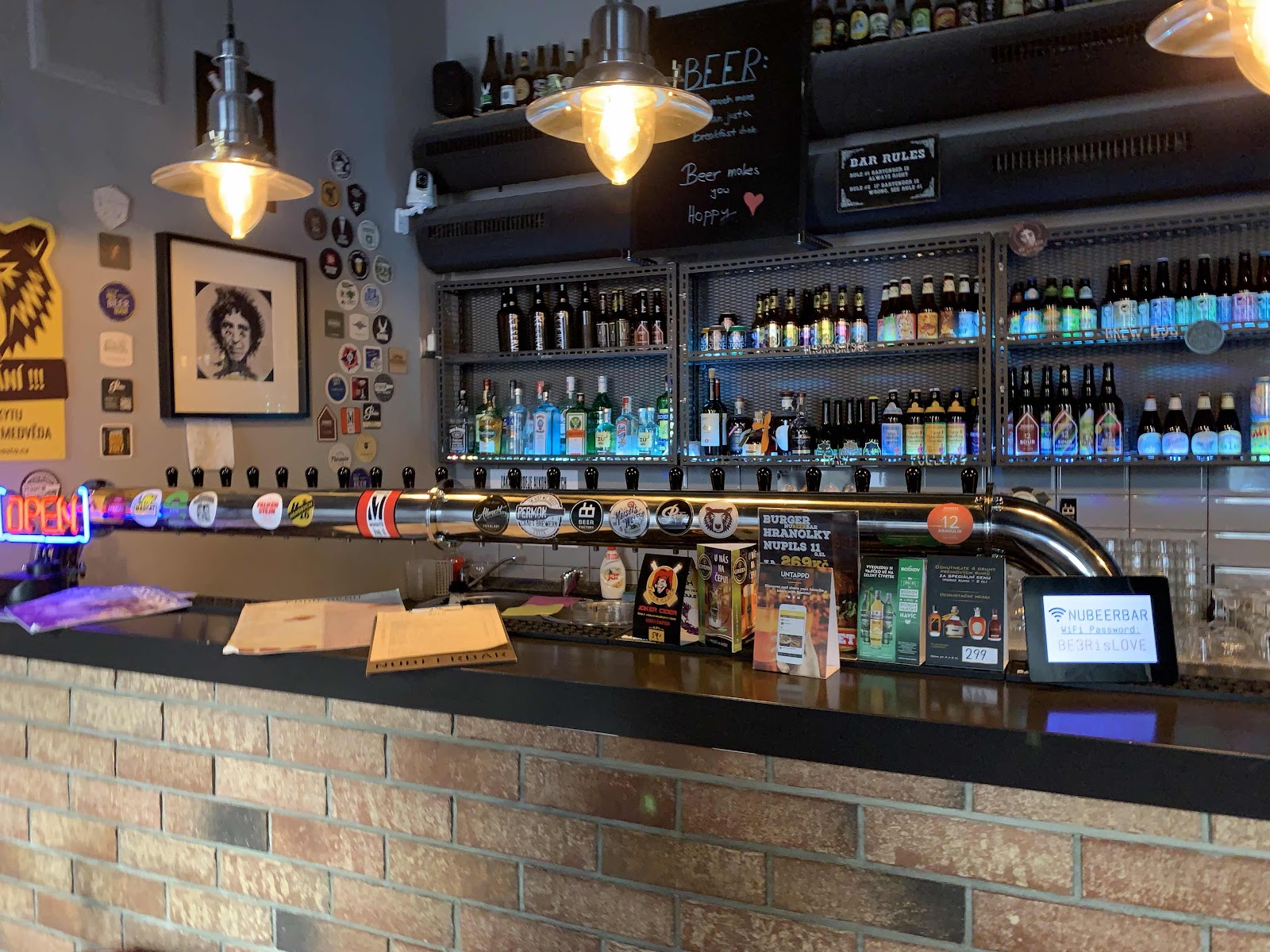 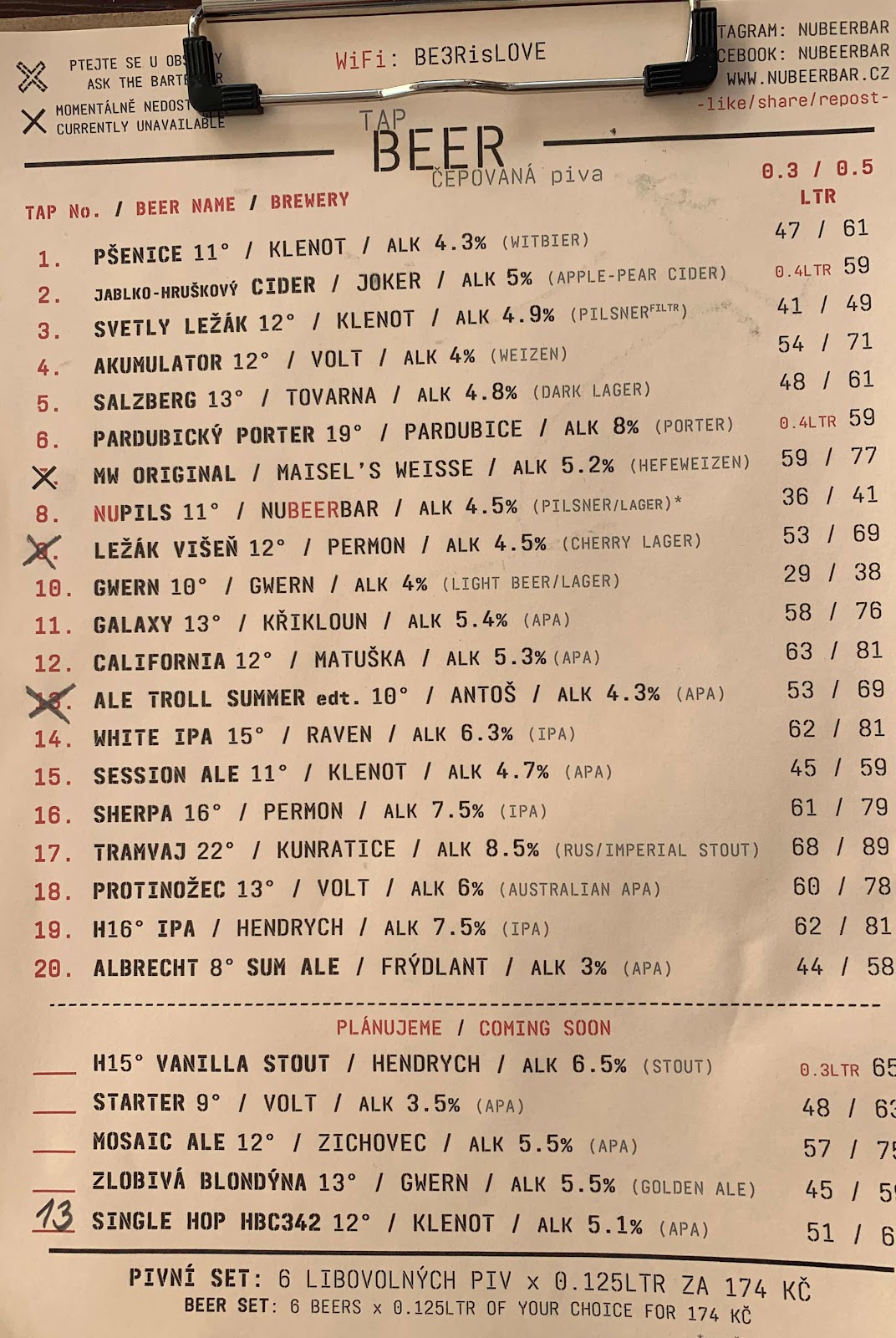 What caught my attention was the Albrecht 8º Summer Ale. To 8º beers in one day! 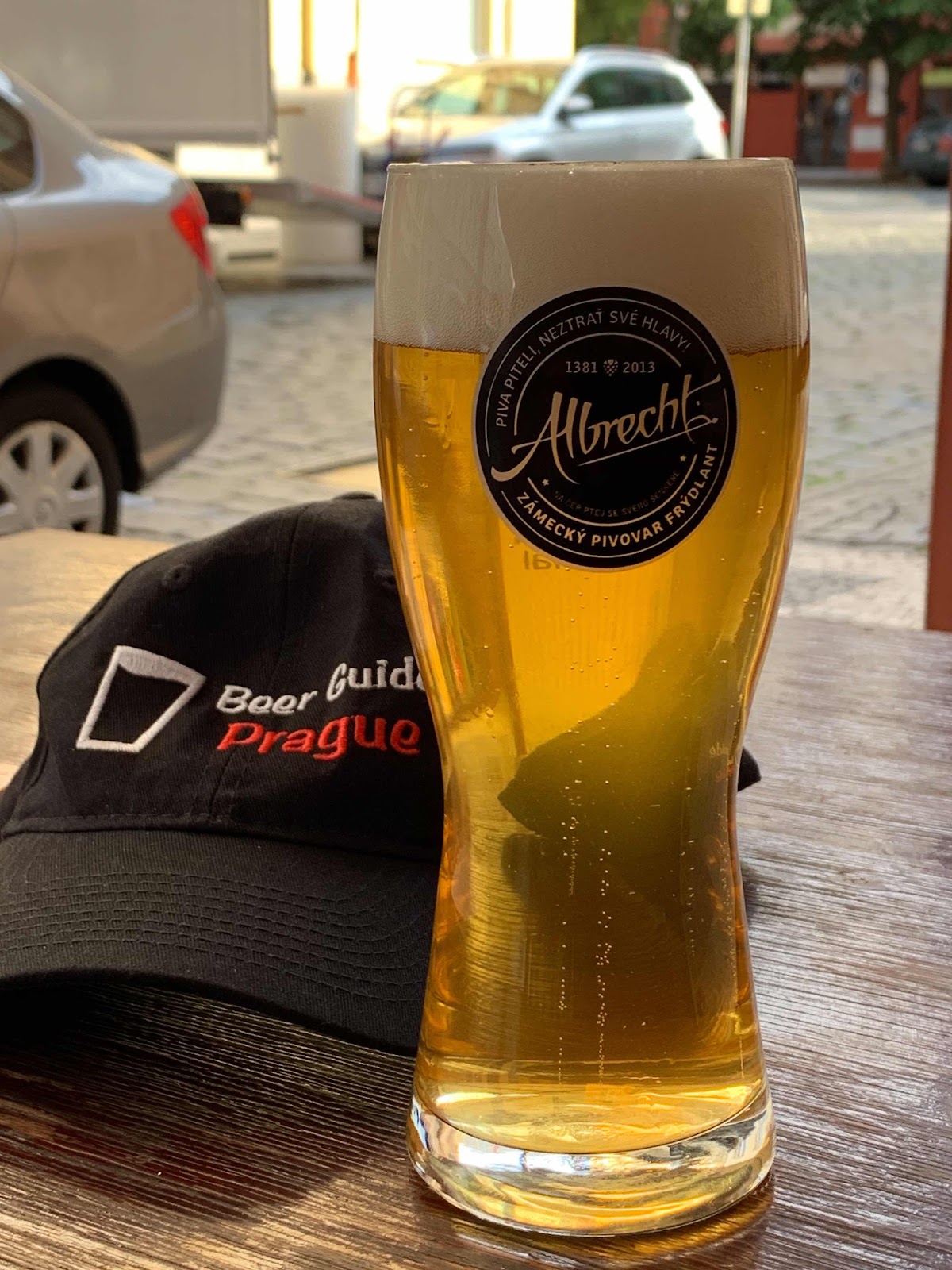 Like the Hendrych 8º the bitterness hits you first. Being an ale it was not as clean either but the fruity esters worked. A very enjoyable beer, as have all the Albrecht beers I’ve had.  The beer looked lonely by itself so I ordered a burger to keep it company. 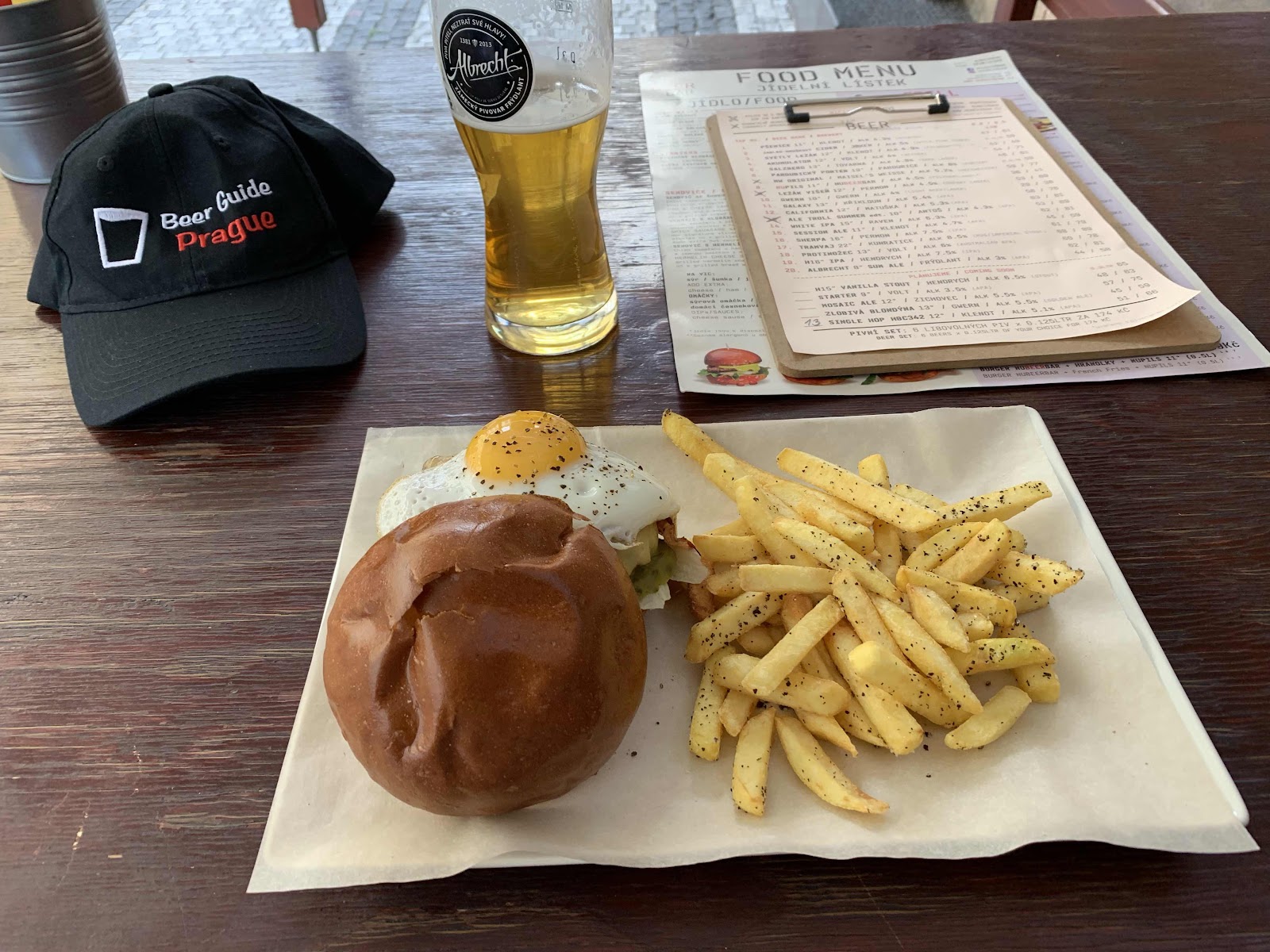 Nothing much to say about the burger — good but not outstanding. And yes that is a fried egg on top.
Posted by The Mad Brewer at 2:08 AM