I hope you all appreciate how hard this job is, getting up every morning and going out to drink beer.
No new places on the agenda today, mostly just visiting places I’d been to before to see how they were doing.
I headed out and did check out a couple places that didn’t seem quite up to being the the Guide. Luckily, I didn’t have to have a beer in either of them.
I soon found myself in the neighborhood of Novoměstský Pivovar, which claims to be Prague’s first (modern) brewpub. “Modern” because U Flecků has been around a few hundred years longer. The quality of the beers is very variable. Over the past 10 years I’ve had some very good one and some that I left on the table, but mostly they are just average — which is how they were today. Drinkable, enjoyable even, but no need for me to have two. 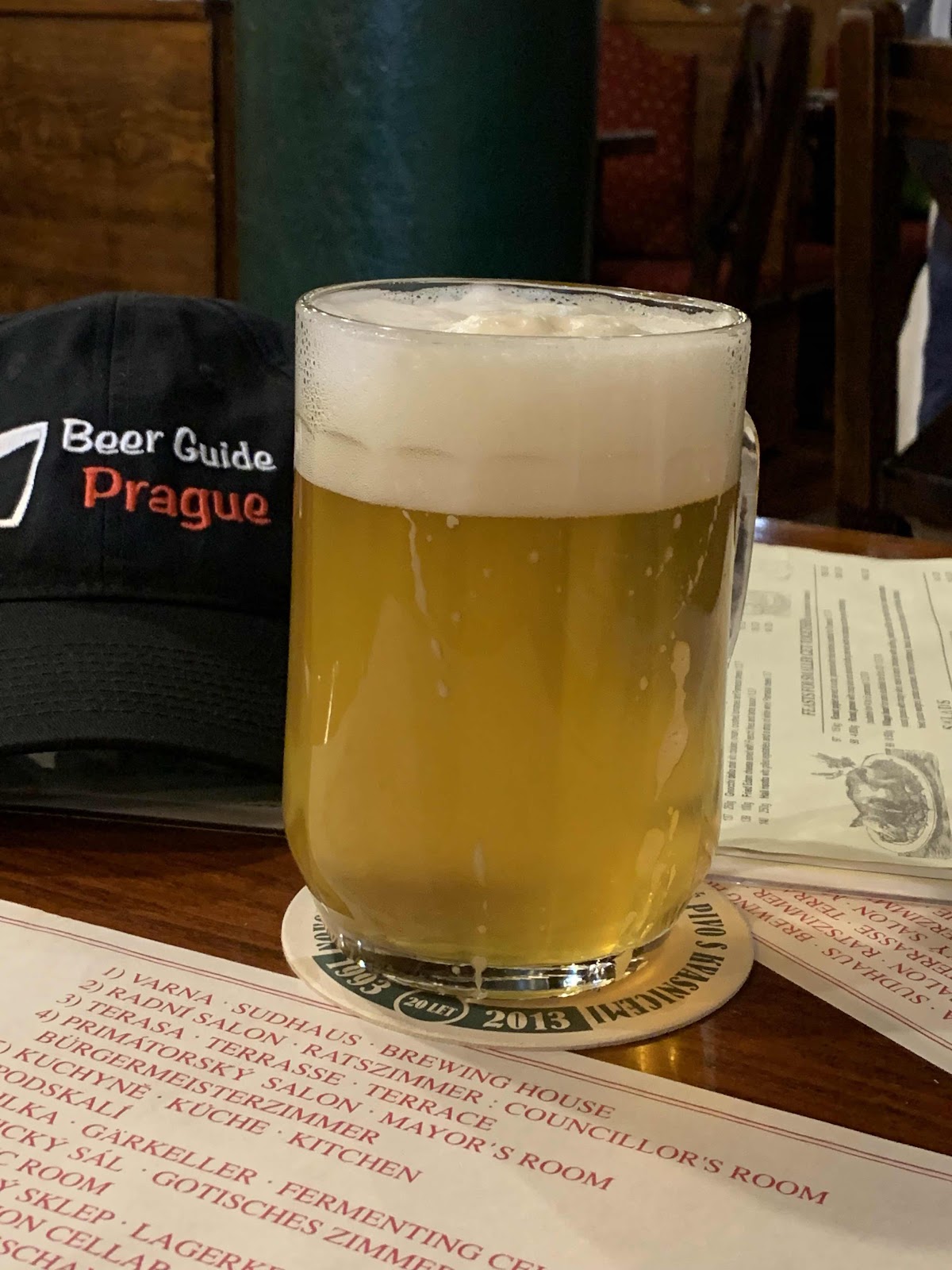 However they do have good roasted chicken wings. The menu says “spicy” but that is “Czech spicy.” Lots of garlic and pepper and a bit of heat. And when they say “5 pieces” that is 5 whole wings, not way it is done in the US (and places that copy American  style) by getting 4 “wings” per chicken. 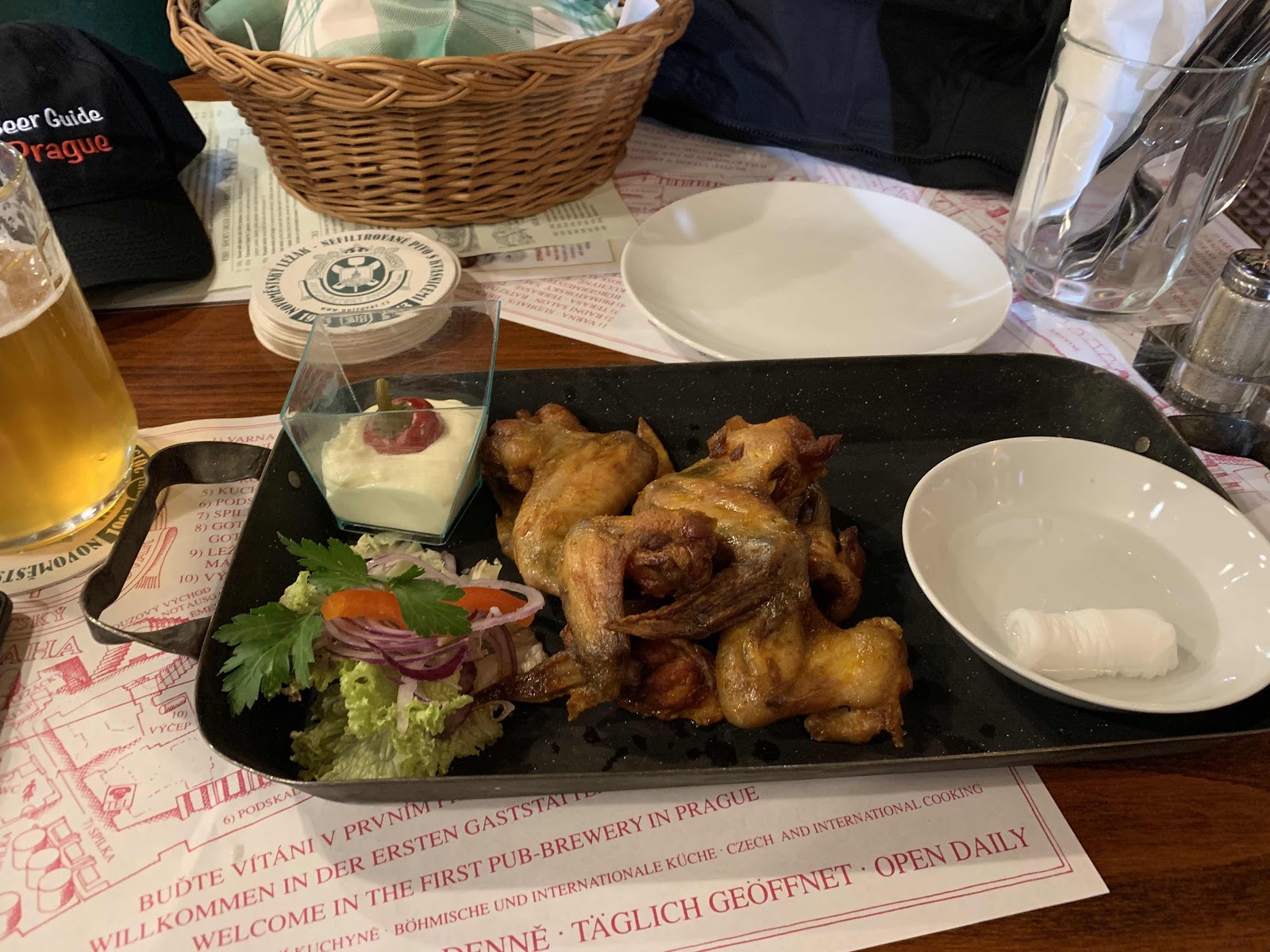 The brewery is right in the upper room for all to see. 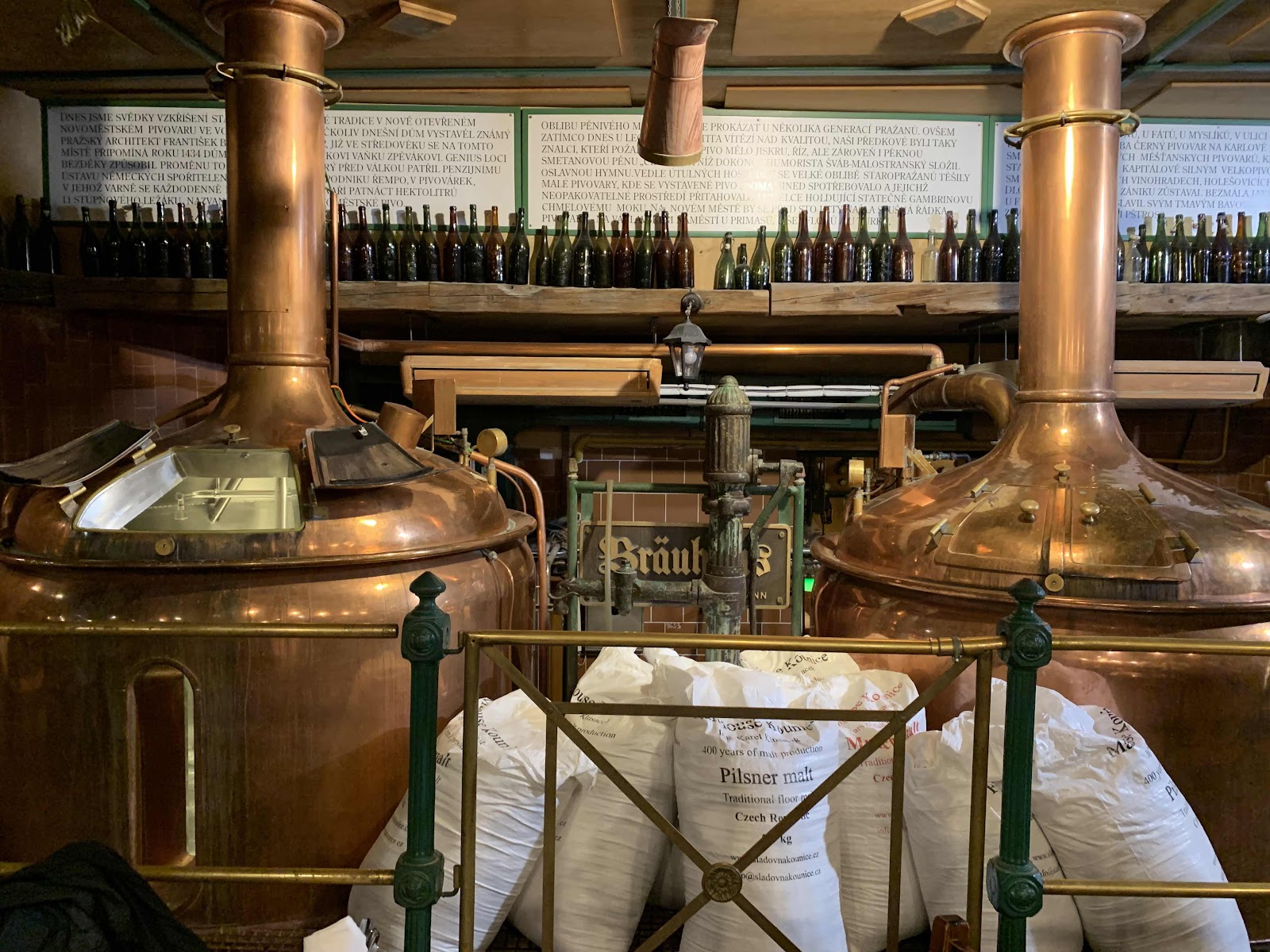 Next it was over near to Beer Story, not far from Stároměstké Náměstí (Old Town Square). They once were connected with he restaurant/deli next door called “Food Story.” The restaurant has changed hands but the pub and bottle shop remains. 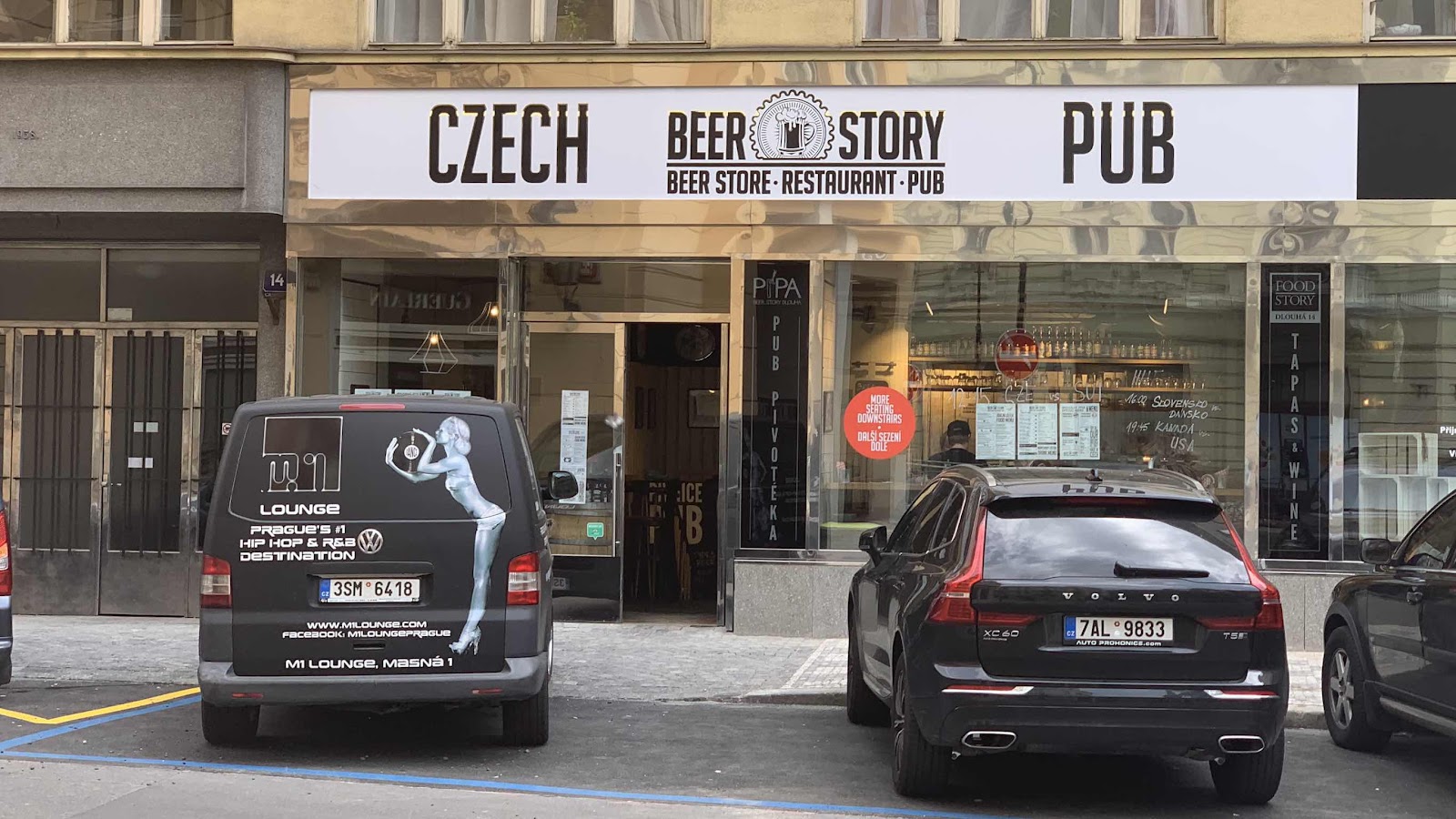 One reason I like to stop in is they usually have the Břevnovský Klášter Světlé Ležák 12º on tap. I really, really like this beer. The brewery is a monastery  on the outskirts of Prague that can be easily reached by tram. (This is not the closer in Strahov brewery) 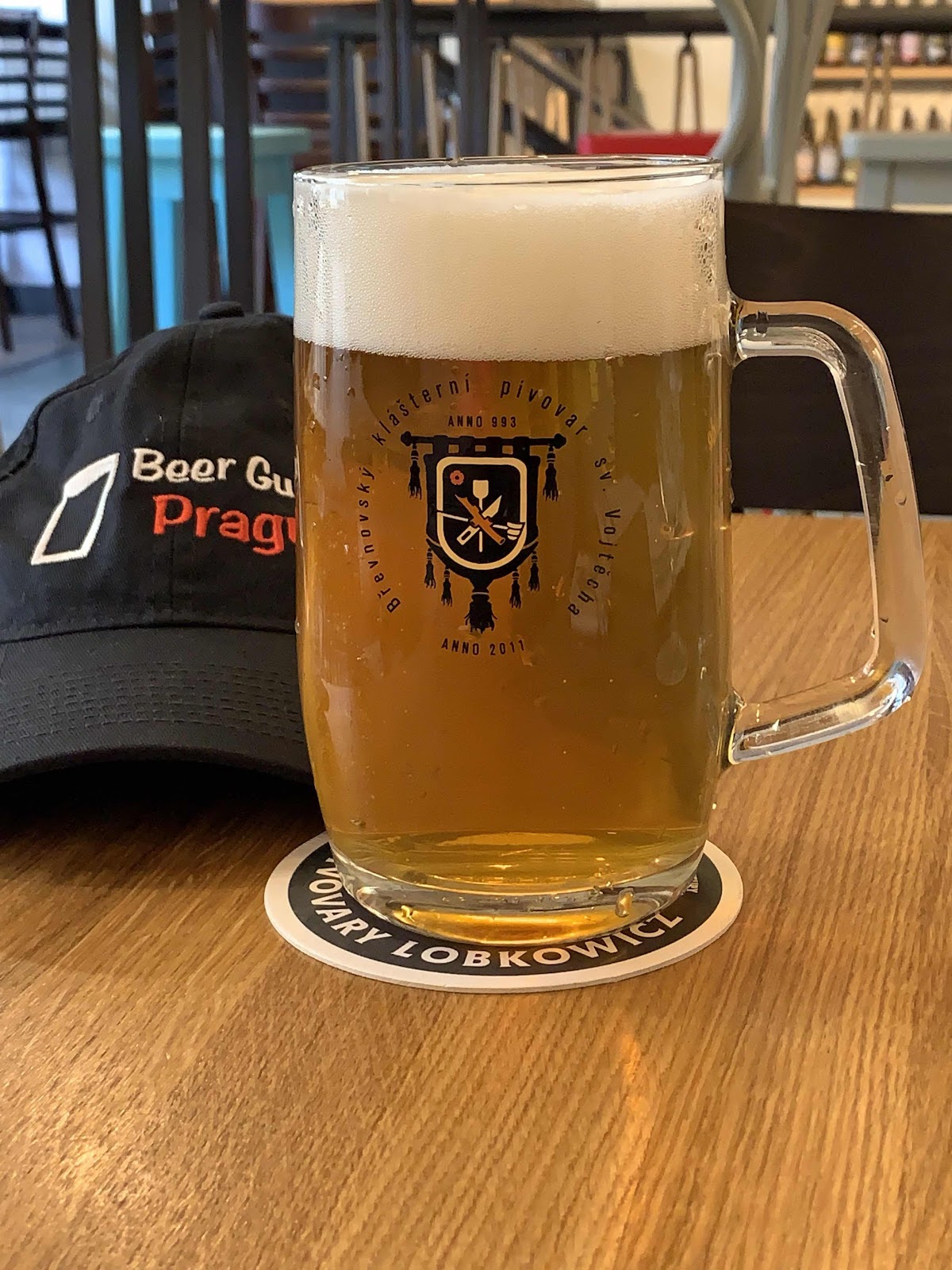 Since you are in a touristic part of town, you pay tourist prices. When I see these prices at first I am outraged! How dare they charge so much for this beer! Then I realize that the sky high Kč 82 I paid for that delicious beer works out to be about US$3.50. All is relative as Dr Einstein used to say.

I hadn’t yet had a Pilsner Urquell and I knew where I wanted to go. It wasn’t that far as the crow flies, but it would take me thru the heart of Tourist Prague, which I find annoying, so I took the longer way by tram.
Prague has lots of public passages thru buildings — usually they are shopping arcades. Google Maps is aware of these and will often route you thru them. Of course, some of them are closed after business hours but Google doesn’t know this and tries to send you there anyway. Very frustrating.
But sometimes there is a positive side effect — a few years ago it routed thru this shopping building and I ended up an a marvelous garden I never knew was there. 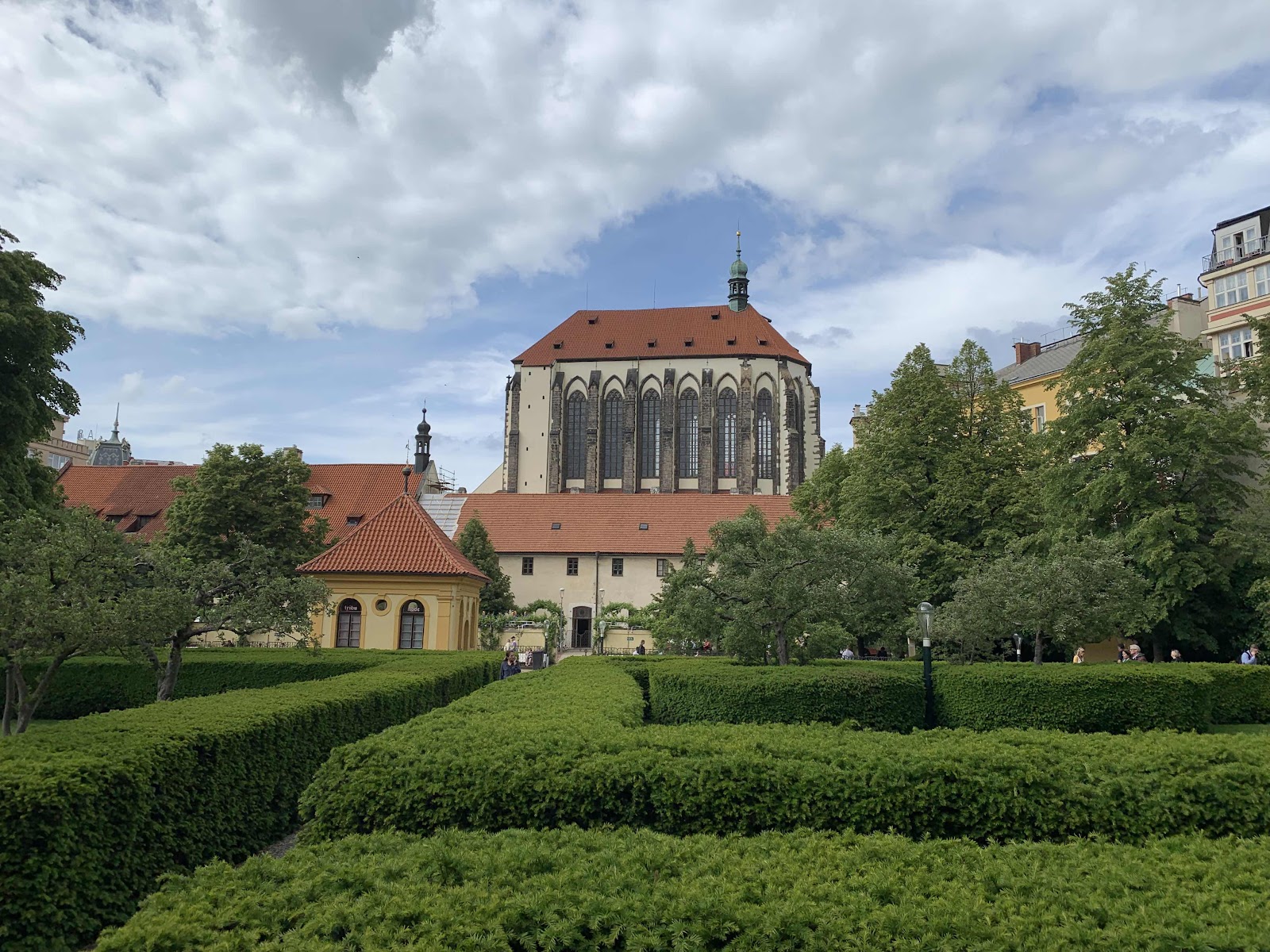 That is a monastery in the background. There are benches all thru it and I’ll just sit and watch people for a few minutes.
Shortly after that I arrived at Jelúkova Plzeňskȧ Pivnice. 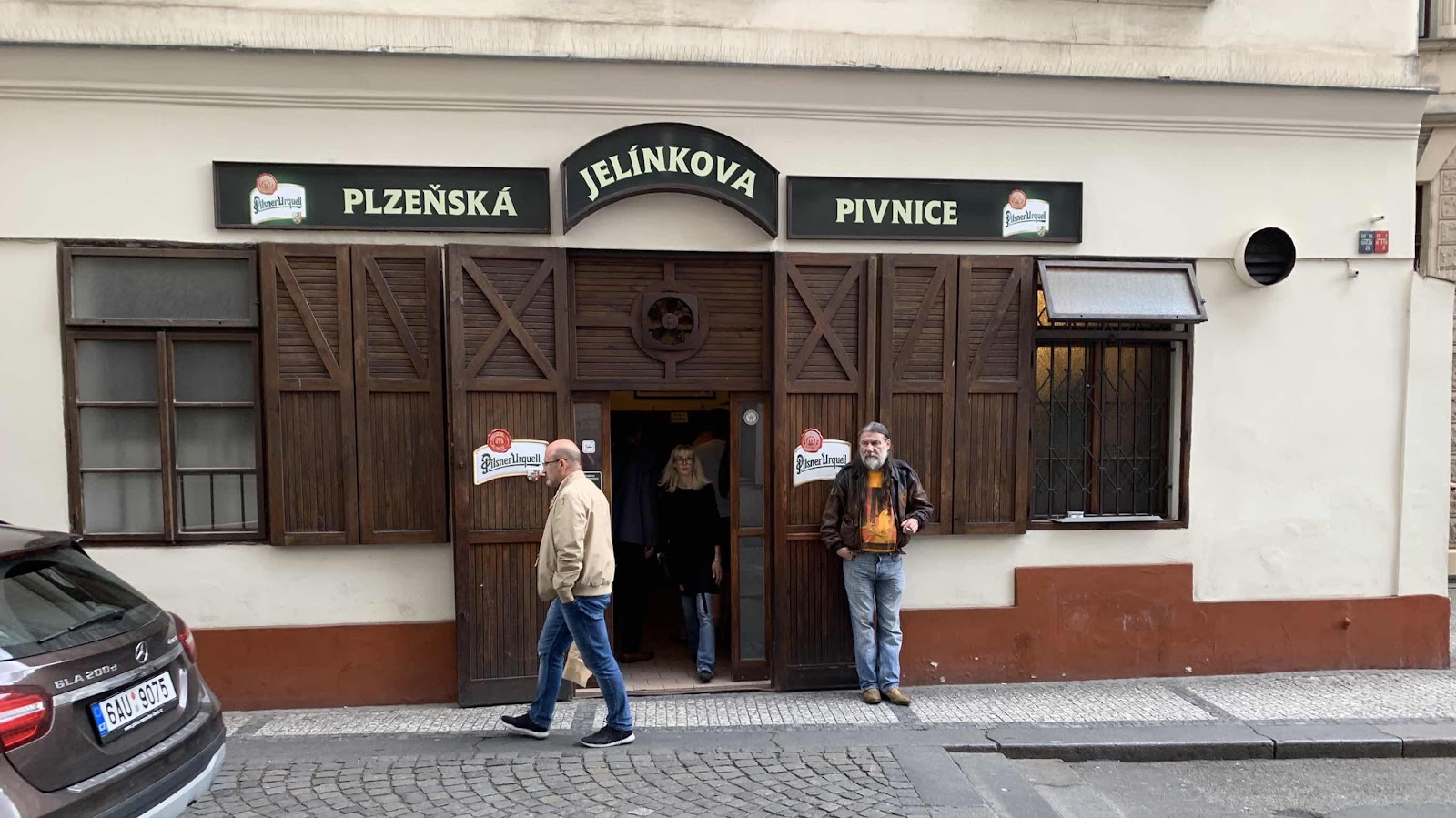 Local friends have told me they have the freshest Pilsner Urquell in town. I can’t dispute them. In the front is a standing bar and the tap. Around to the right is a small room that might hold 20 people. I usually stand up in the bar but today I checked the room and there was an empty table so I sat down and ordered a beer. The only question is the size because they only serve the one beer. 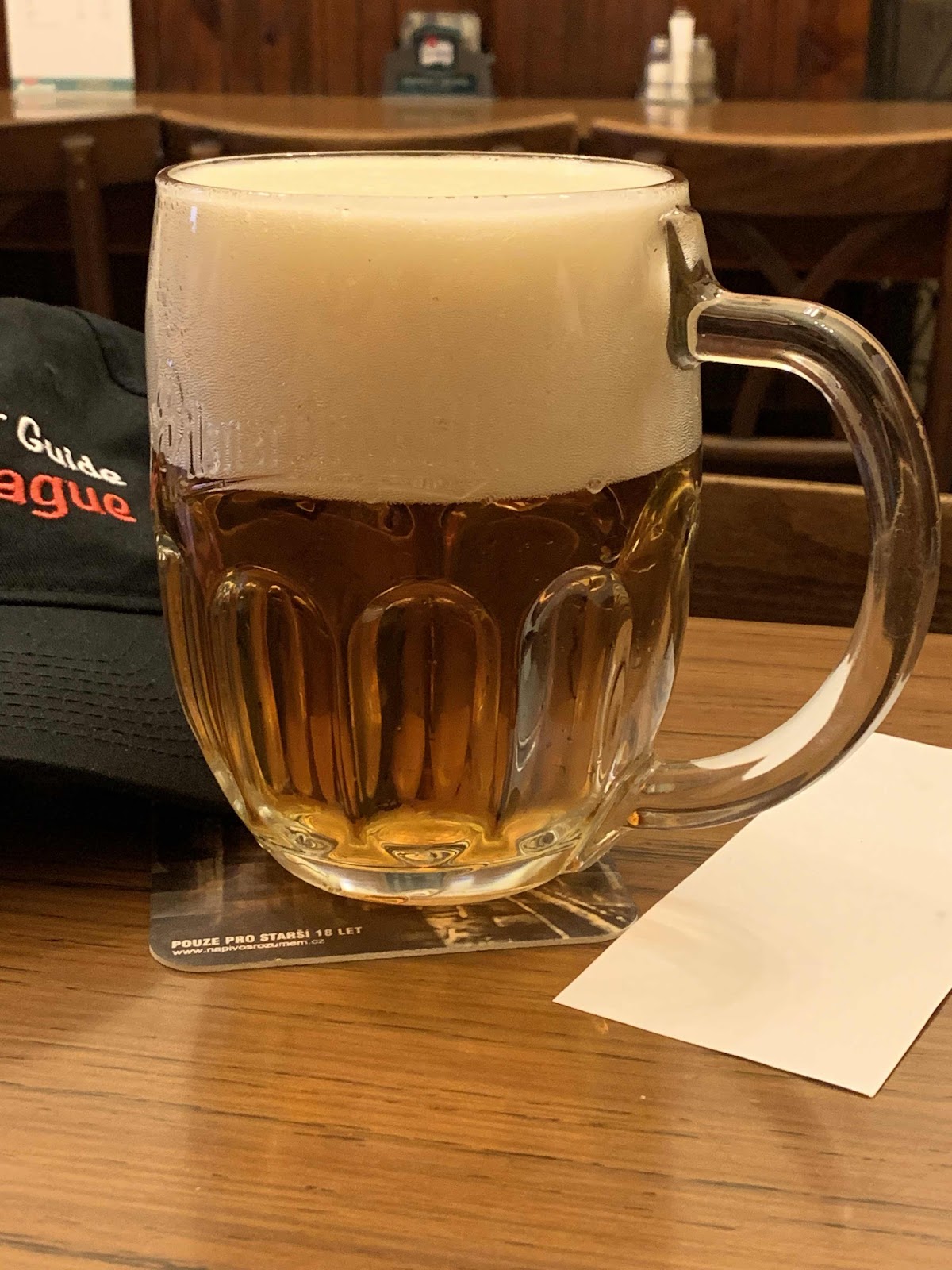 I’ve always had table service in the room but others have told me they had or get their beer at the bar and bring it back. Probably depends on the time of day.

They have a bunch of Pilsner Urquell memorabilia on the walls, all of it in German. 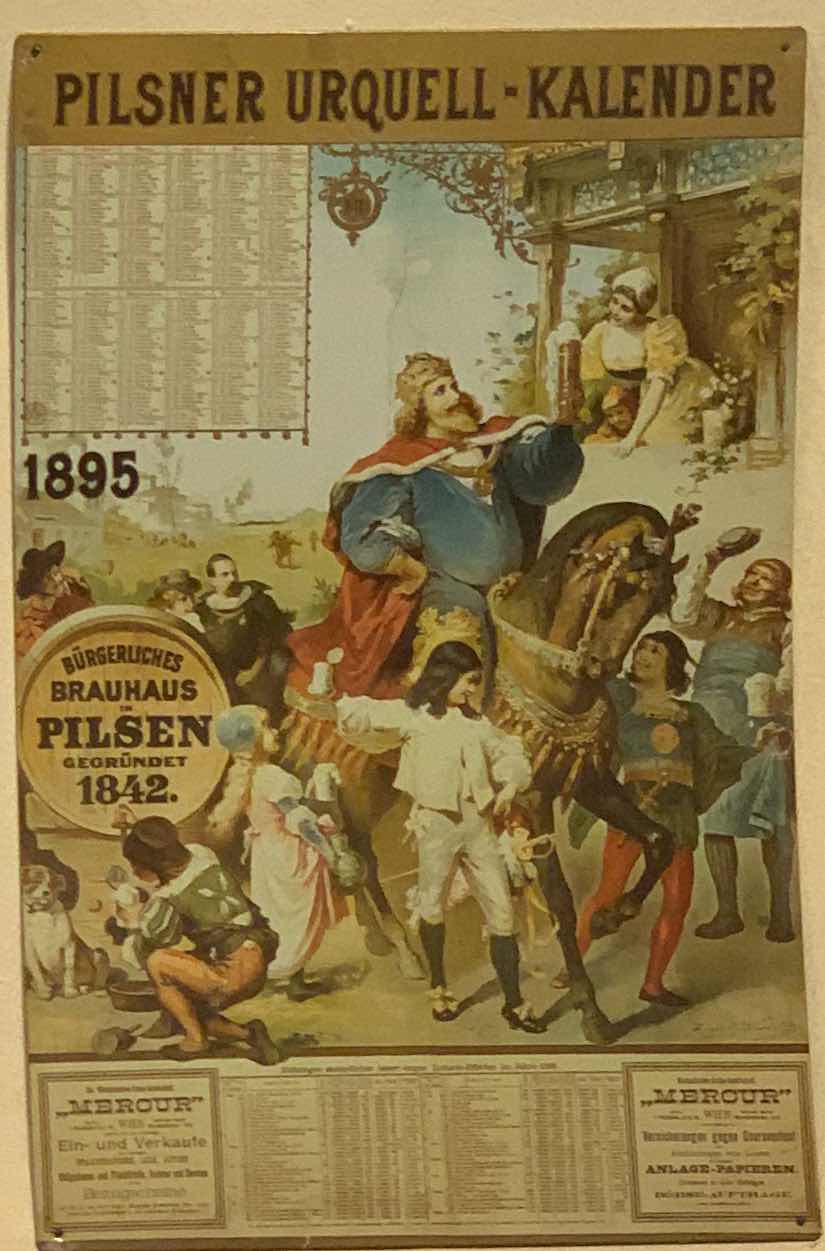 I had a second Urquell just because I was too lazy to get up. Another Kč 47 down the.... drain. It is a nice beer but it is probably in the middle of the pack in regards to beers I like in Prague.
I was just about 5pm so I headed over to Illegal Beer. They open at 5pm and I got there a few minutes before. There were a couple of guys standing outside, I figured they were waiting as well. Then I took a look in the window and people were already drinking. I guess they opened early today and those I thought were waiting, were smoking. 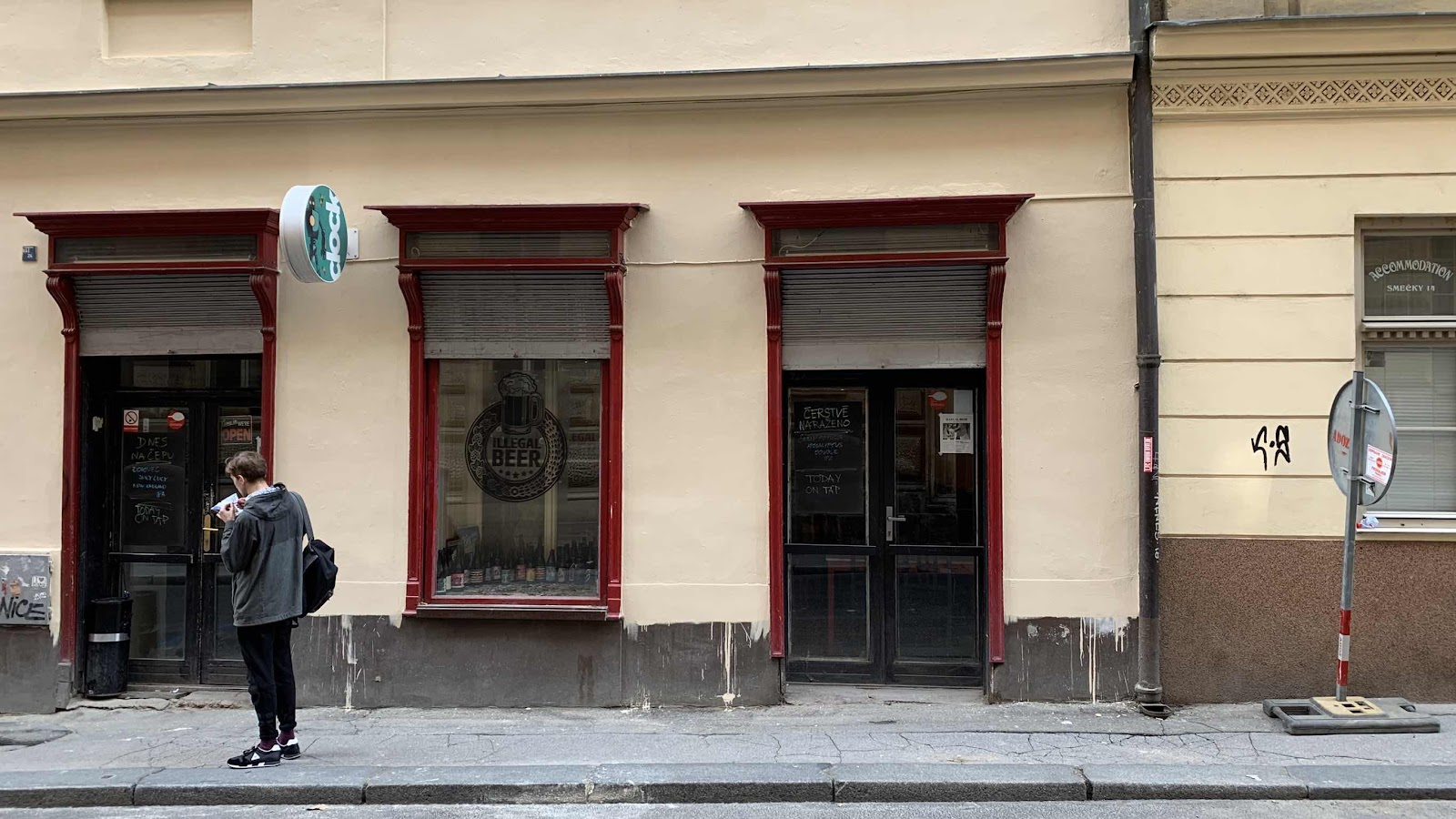 They tend towards “Modern” styles here

I ordered the Zichovec Juicy 15º Orange Juice  New England IPA. A very nice beer. You are seeing Zichovec more and more around town, even in “non beer” establishments. Much like Uněntice. 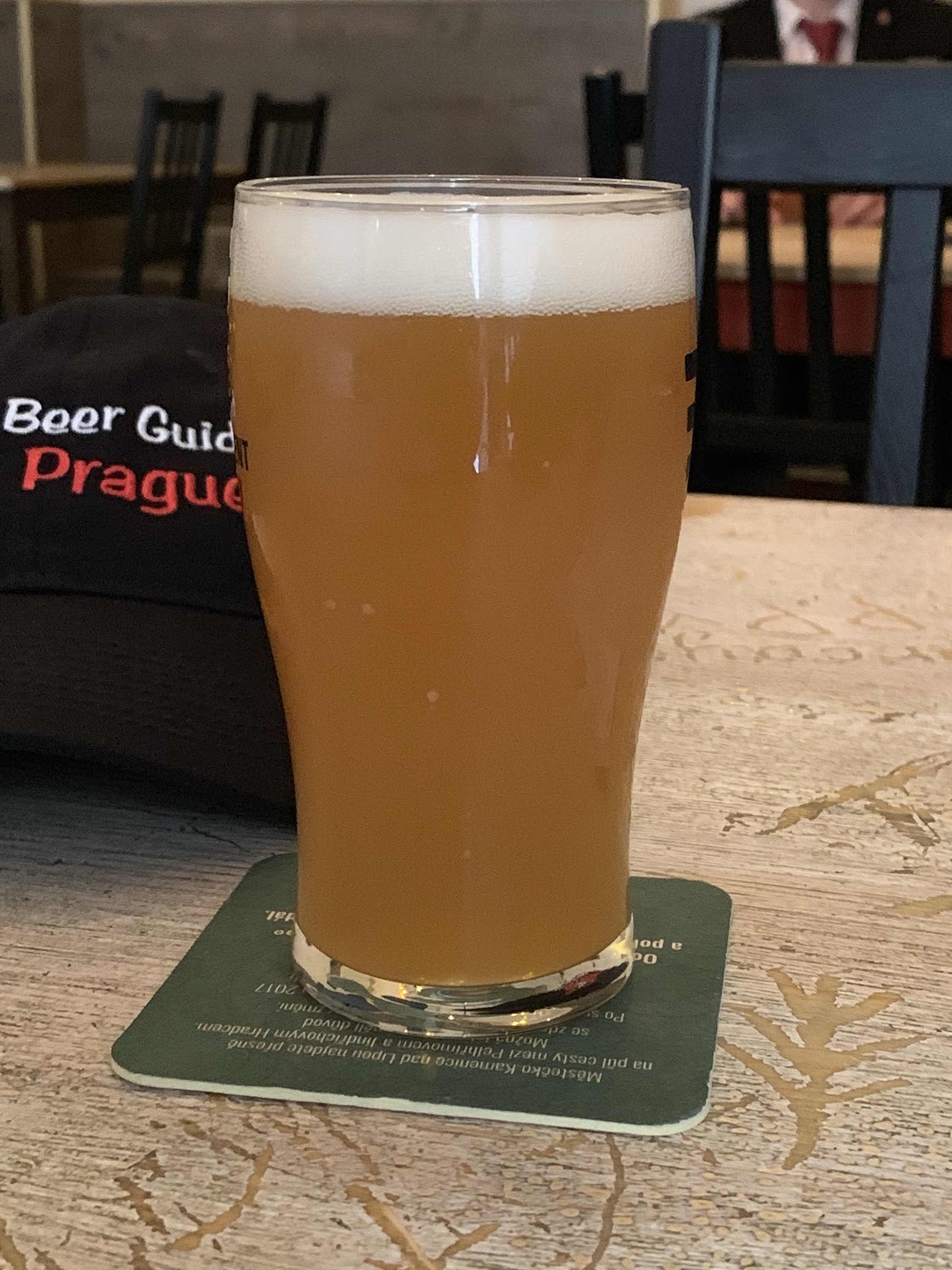 They had the usual Czech bar snacks and also a sausage that was from someplace special that I never heard of but I ordered it anyway. 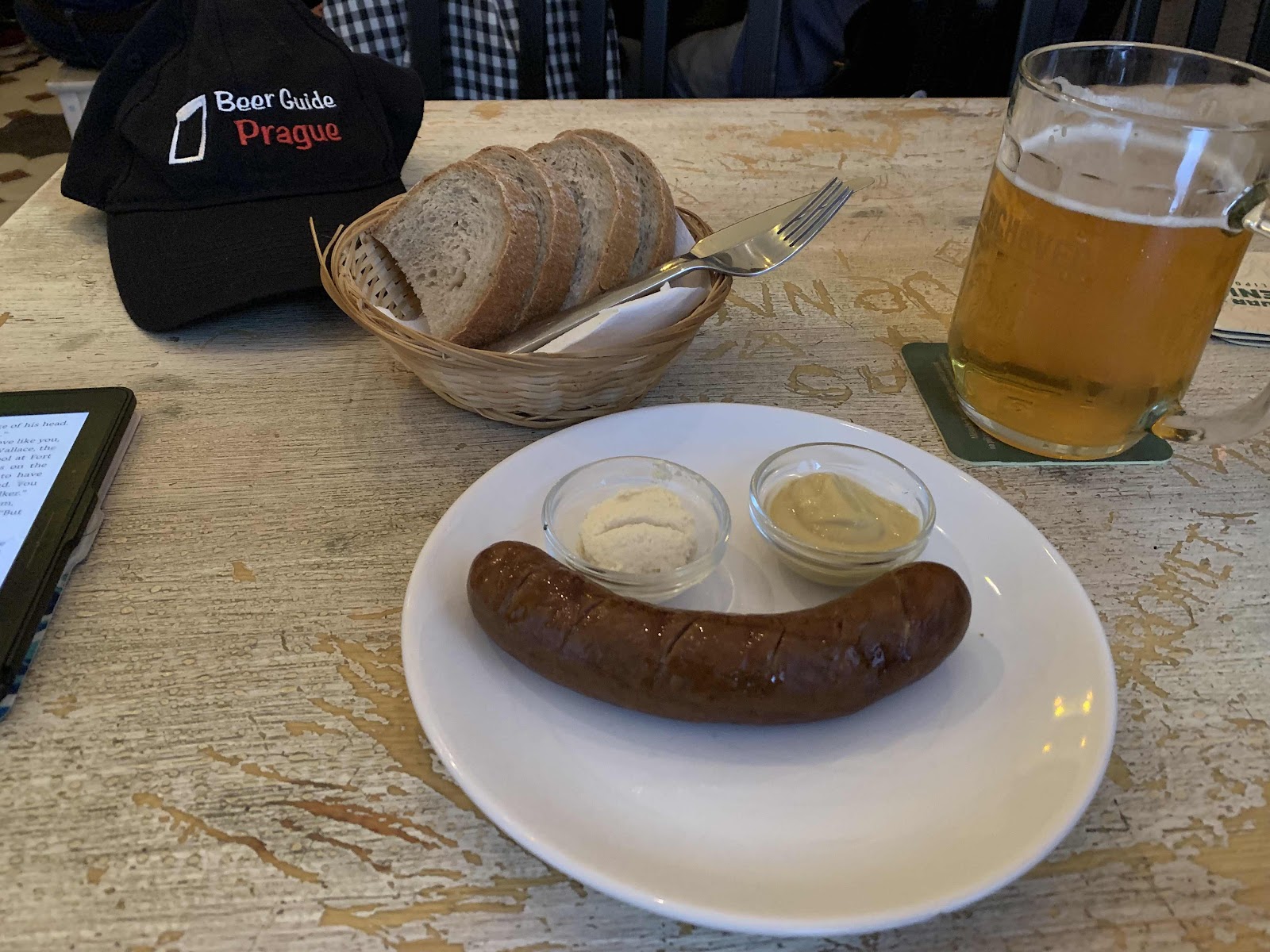 In there somewhere I did order another beer, a JuneBerg Světlé Ležák 12º from the town of Hořice. Another very nice pale lager. 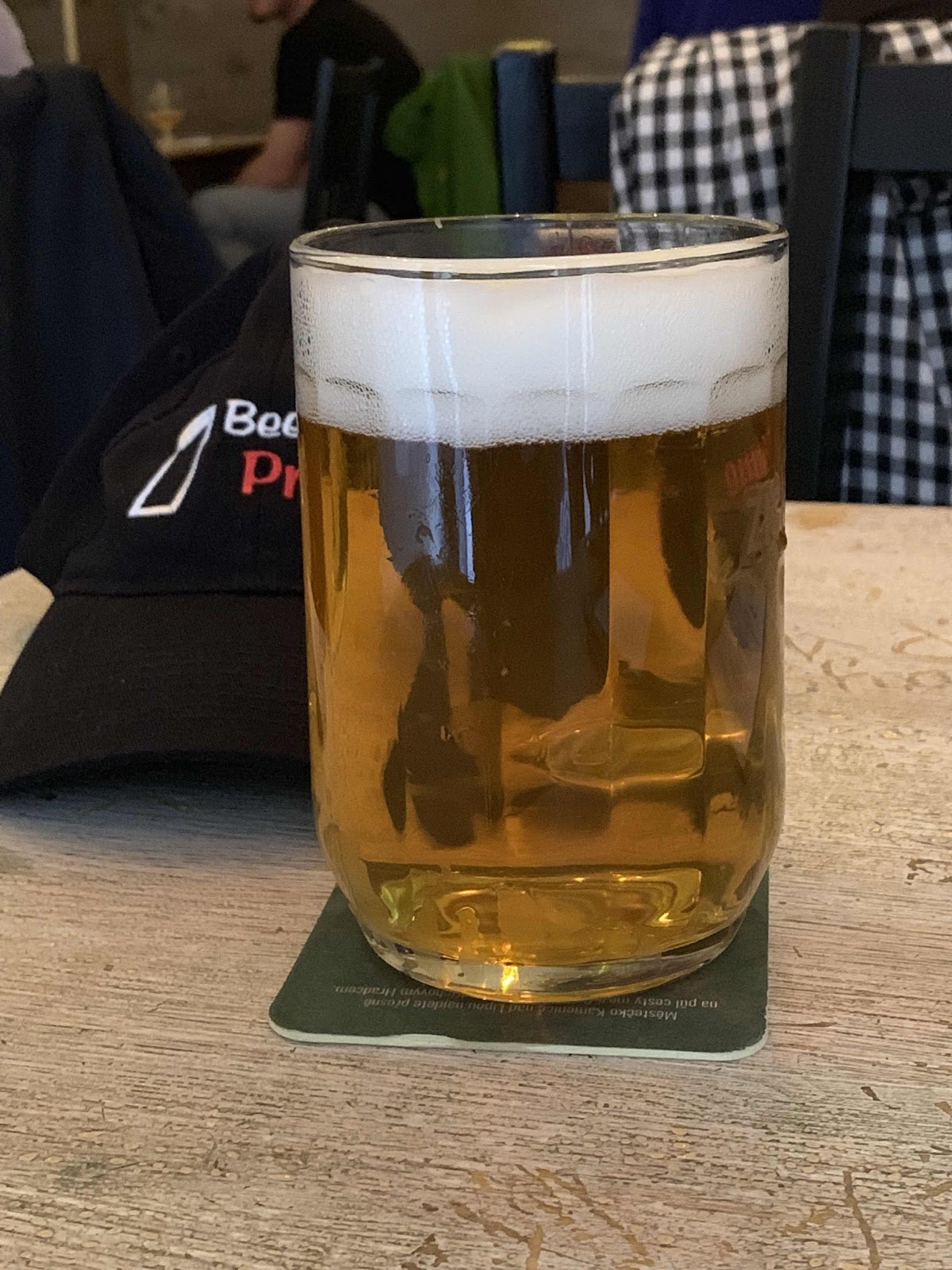 Time to move on and I thought I’d go to Malý/Velký next as it is close to my hotel room. On the way a poster caught my eye... 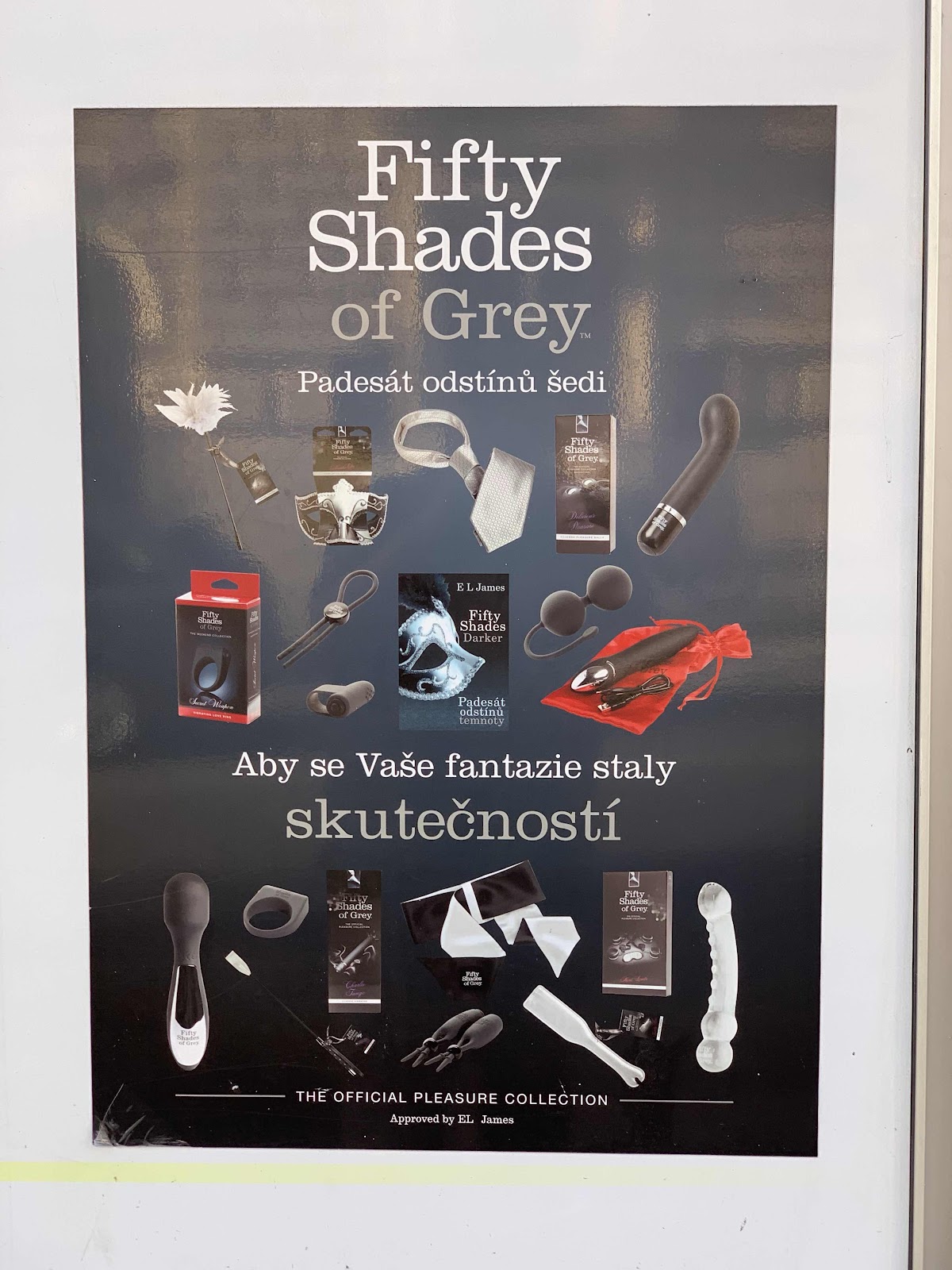 I guess I need to get our more as I didn’t know there were official “50 Shades of Grey”  branded adult toys. Never miss a marketing tie in, I guess.
I was soon at Malý/Velký 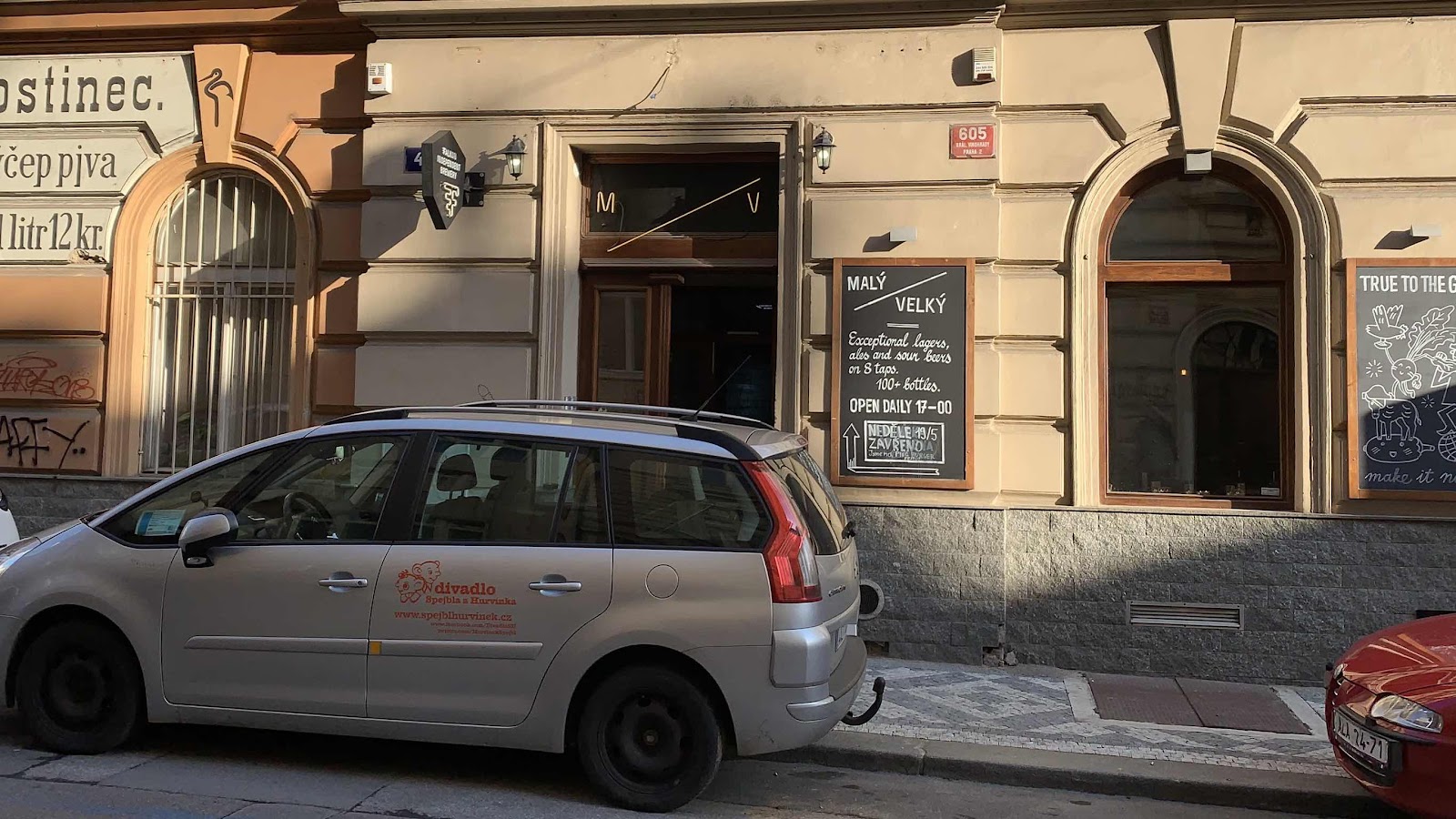 An interesting selection of beers on tap 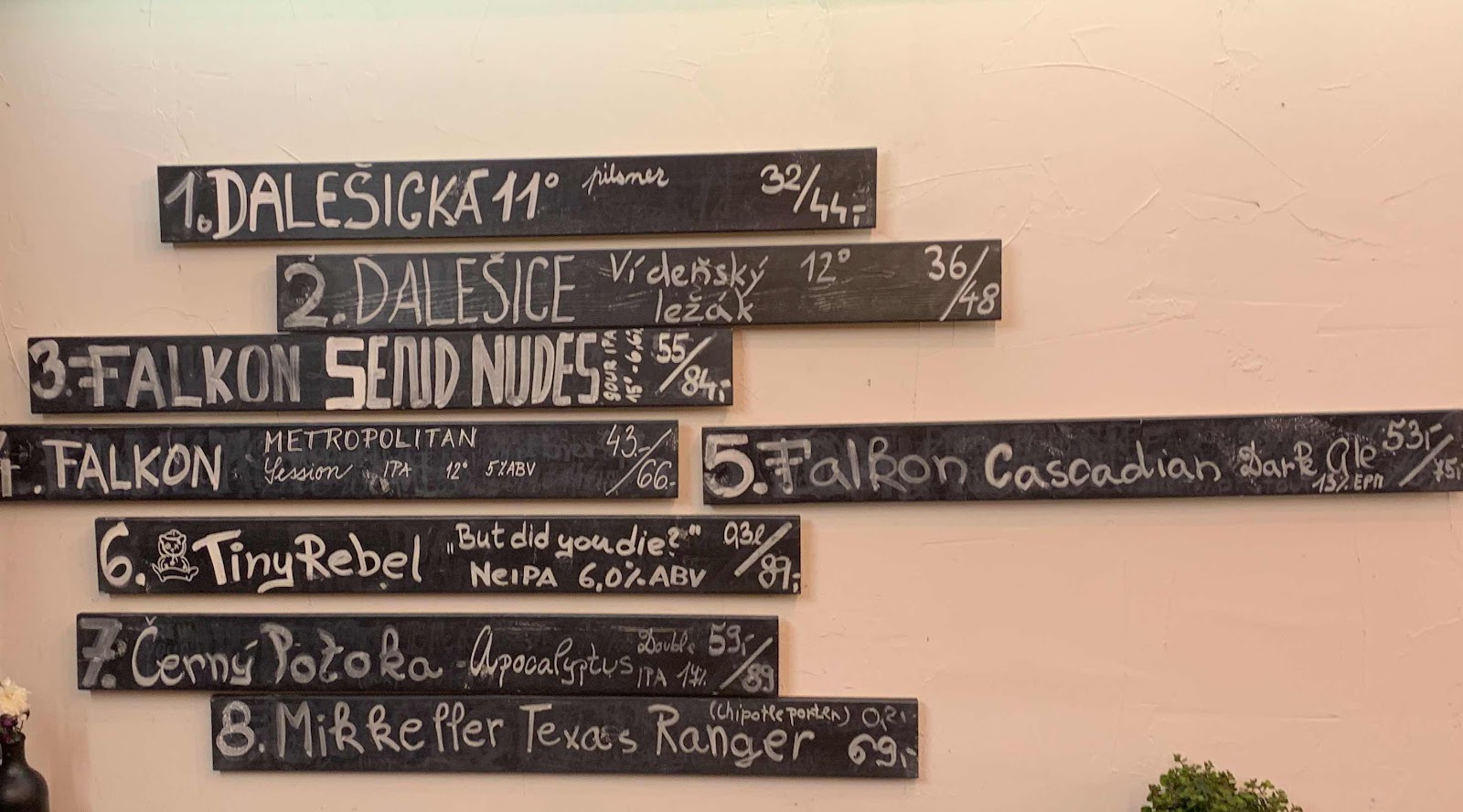 And relatively new addition, some bag-in-box Lambics from Oud Beerlsel 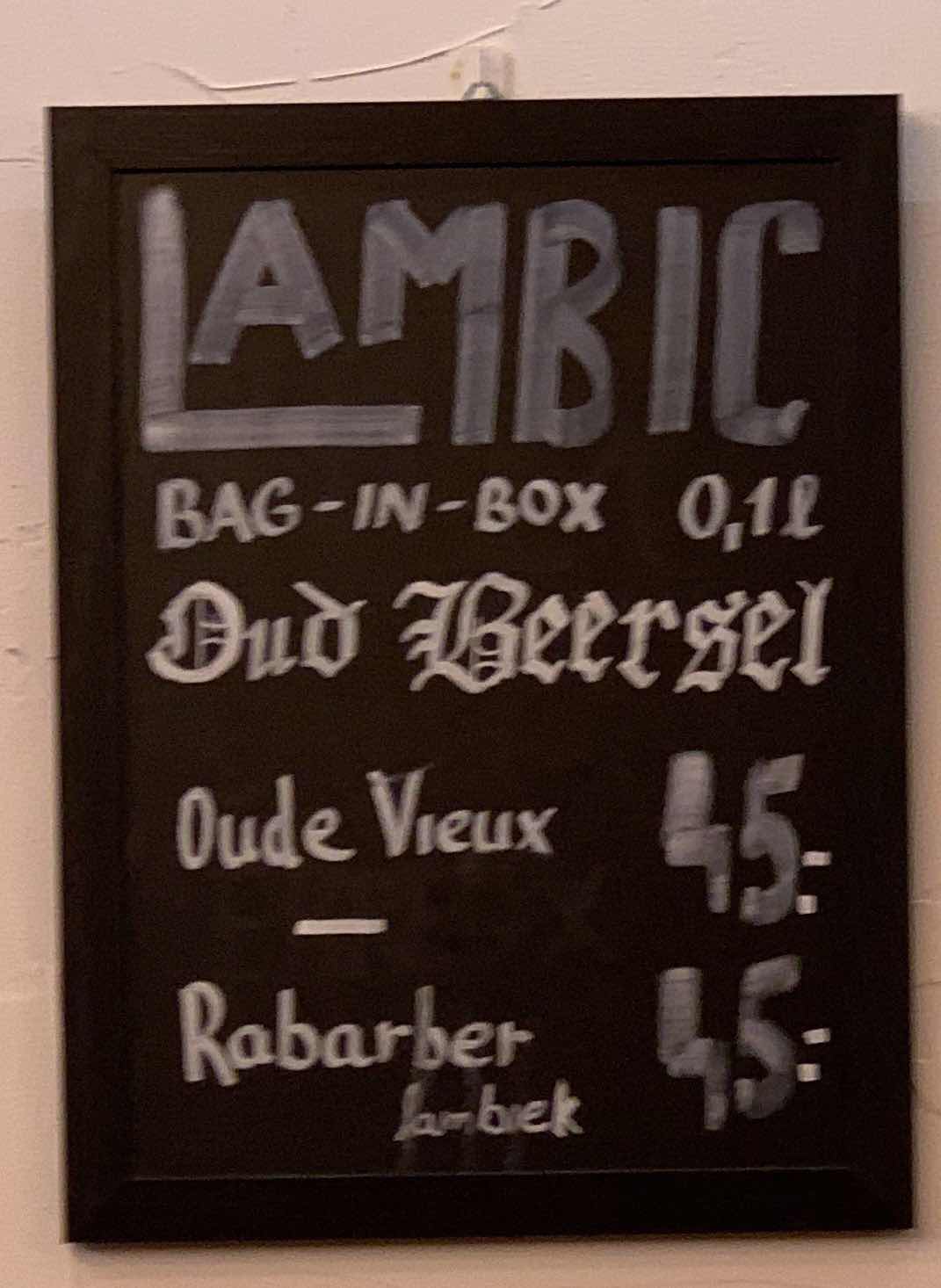 Being Old School (at least in Prague) I went for the Dalešice Videňský Ležák 12º (Vienna Lager). Unlike when I was at the brewery tap the other day, here they served in proper .5L mugs. 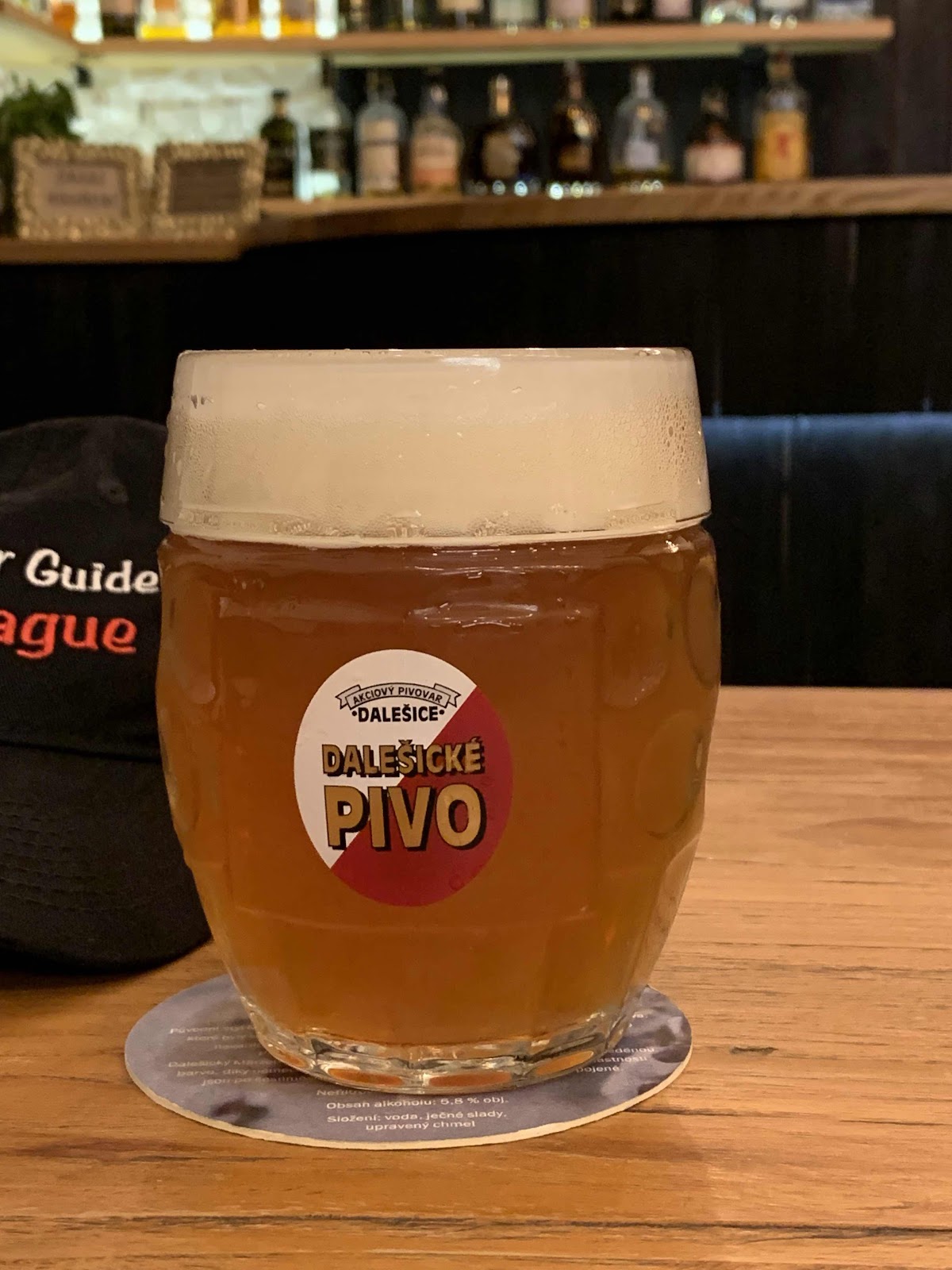 This appears to becoming a more popular style in Czechia. Go for it, brewers, I like these beers.
Since I was drinking my supper, I decided to not challenge my stomach too much and ordered a bowl of Boršč. I’ll leave it to the reader to do the translation, Hint It involves beets. 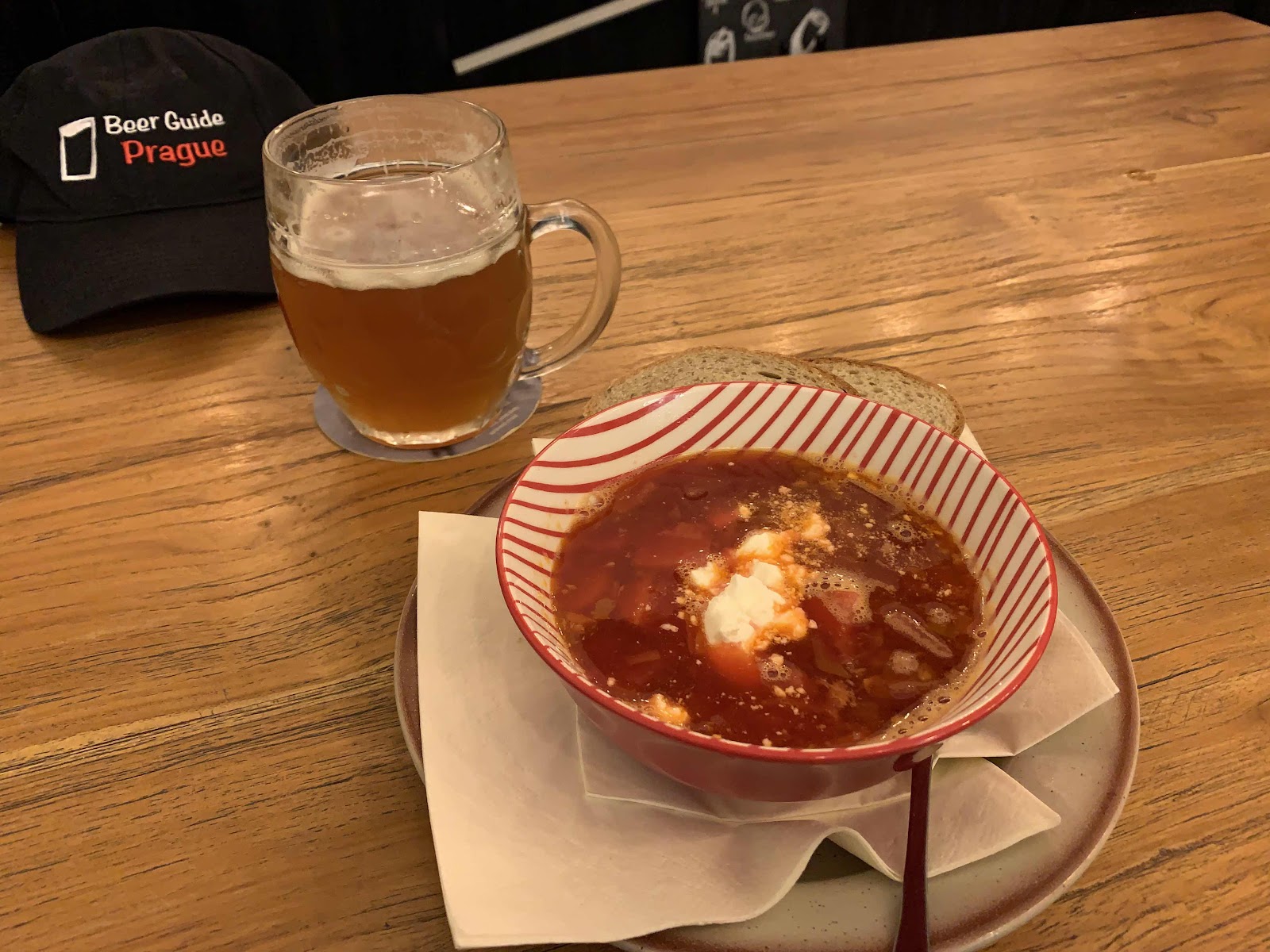 I love the tap setup, two side pull taps for lagers and normal taps for the top fermented beers. That is the way you do it. 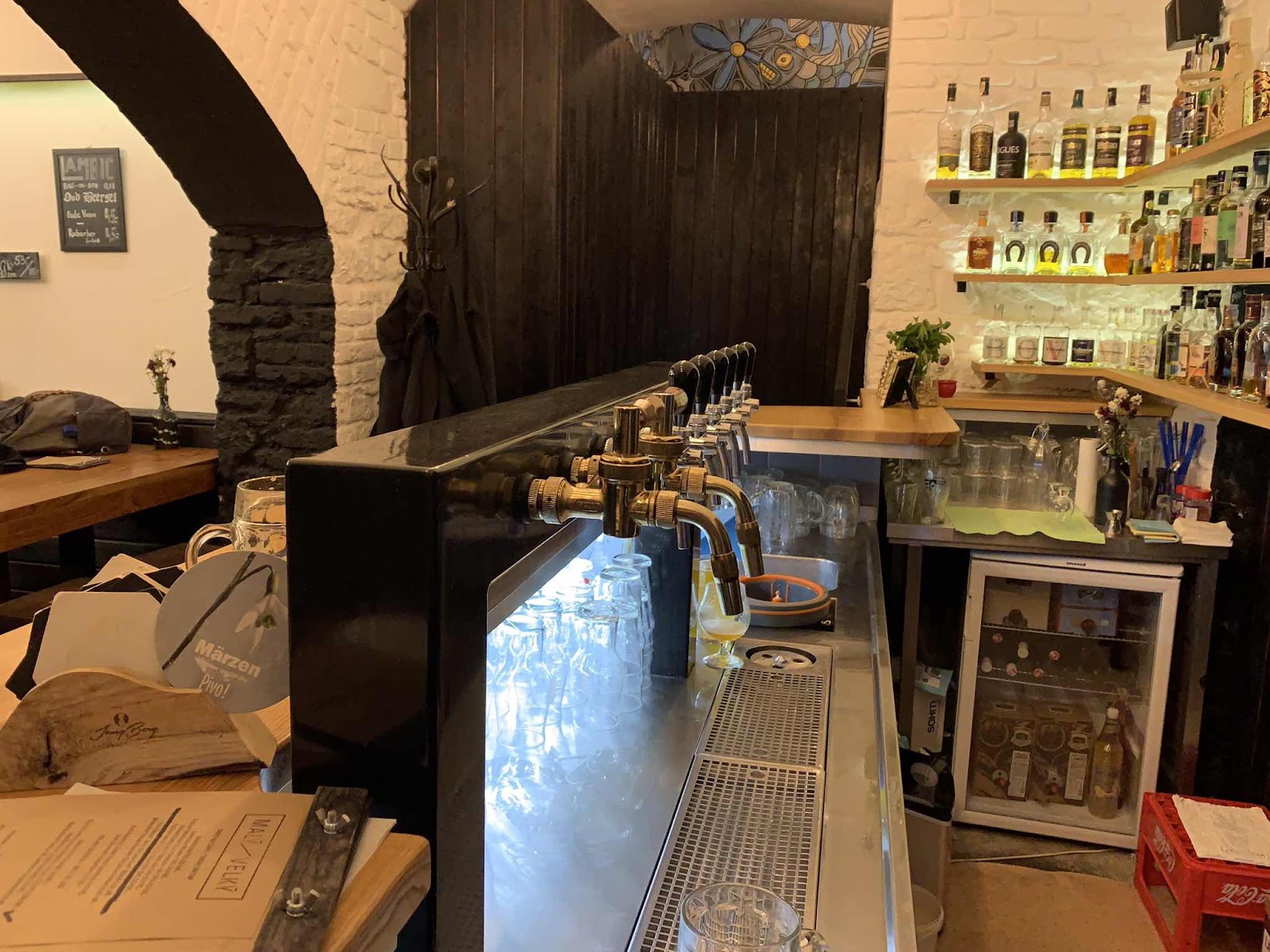