Tuesday was to be my last drinking day in Berlin.
I started off by meeting some old (non-beer) friends for lunch, down in Willmersdorf at a place called Robbengatter. 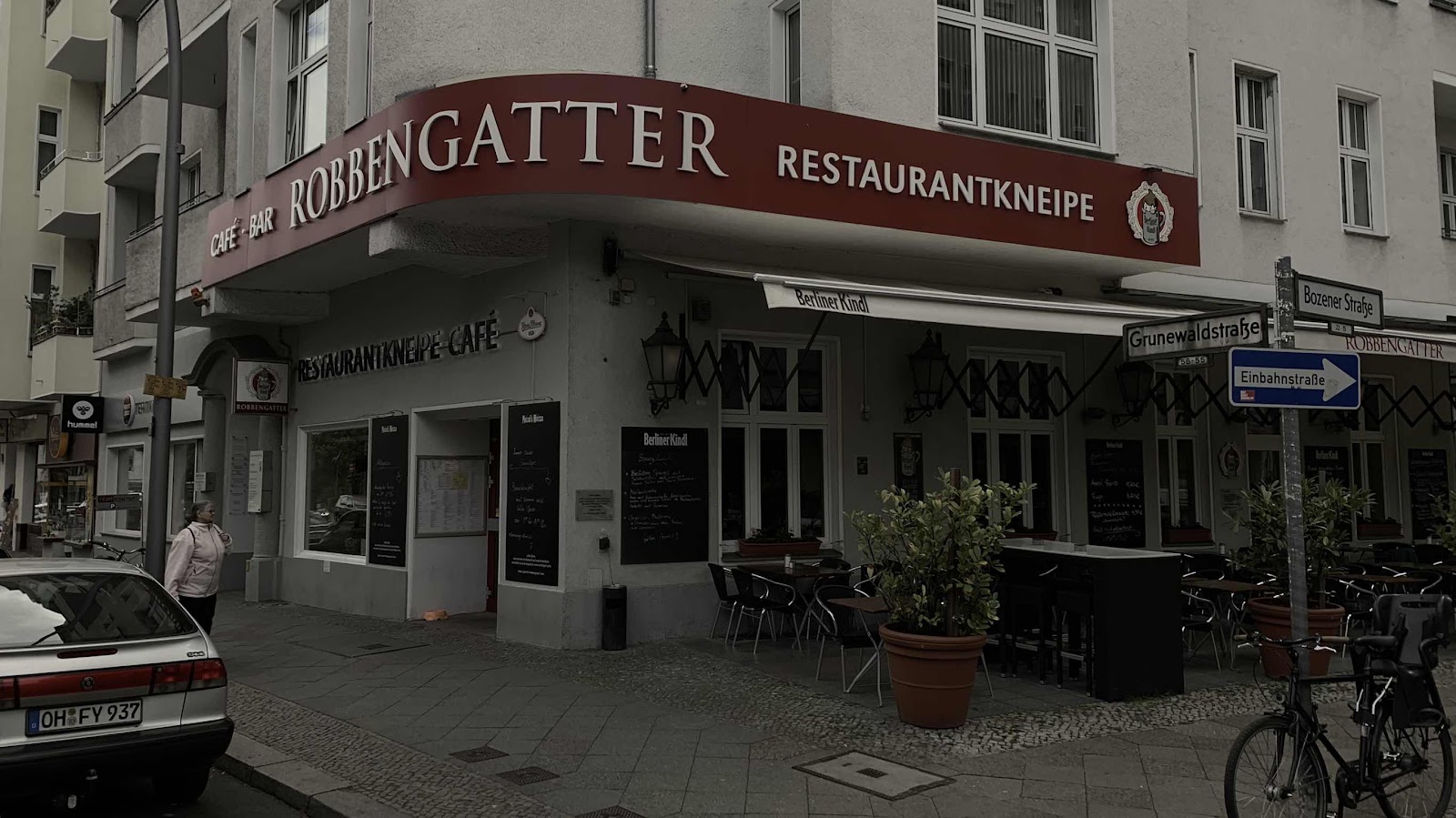 I wasn’t expecting there to be much of a beer selection but I was pleasantly surprised — the “Beer of the Month” was BRŁO MaMa Weisse, a fruited Berliner Weisse. 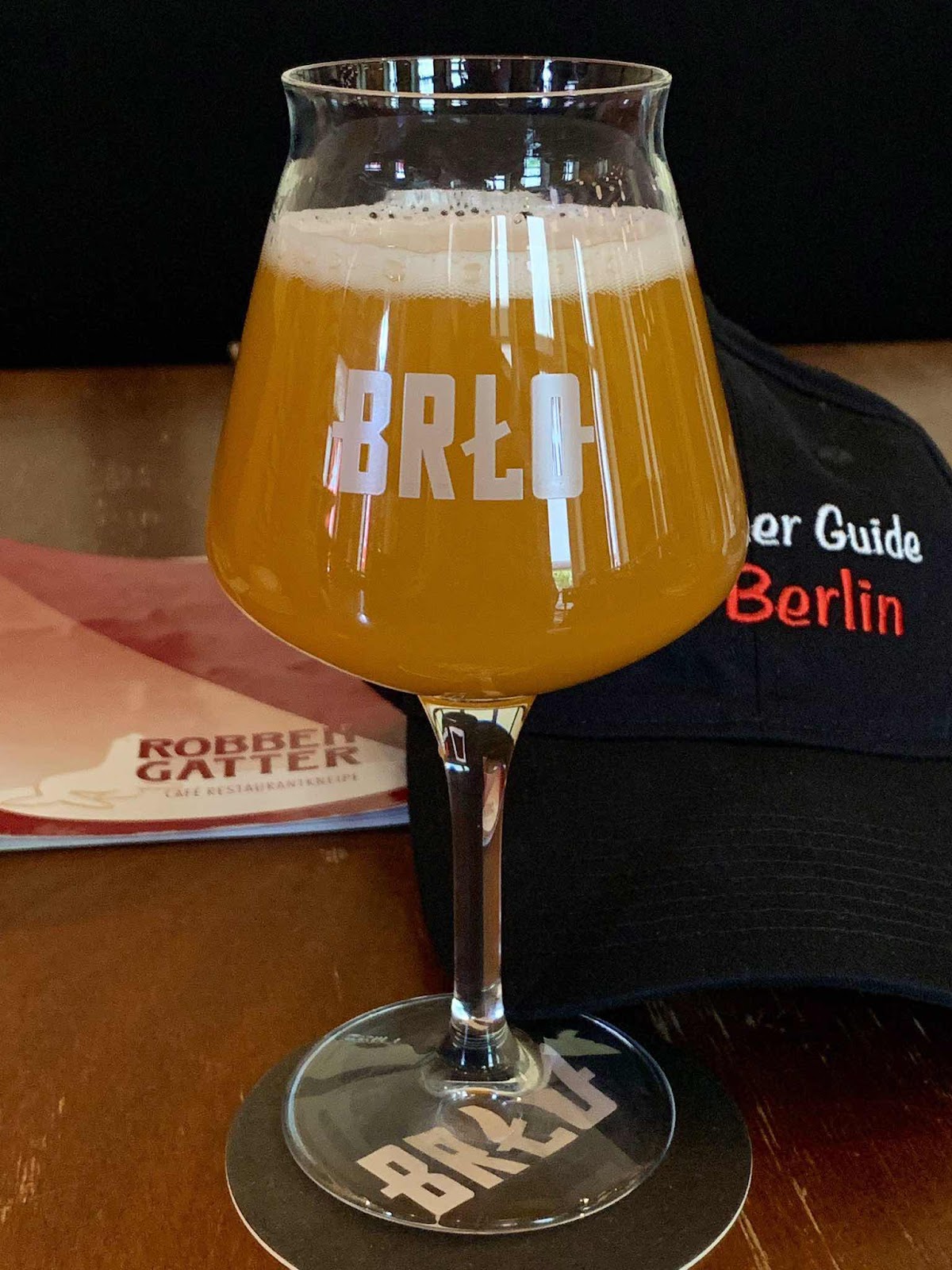 Their regular beer list wasn’t spectacular but I could find something to drink there... 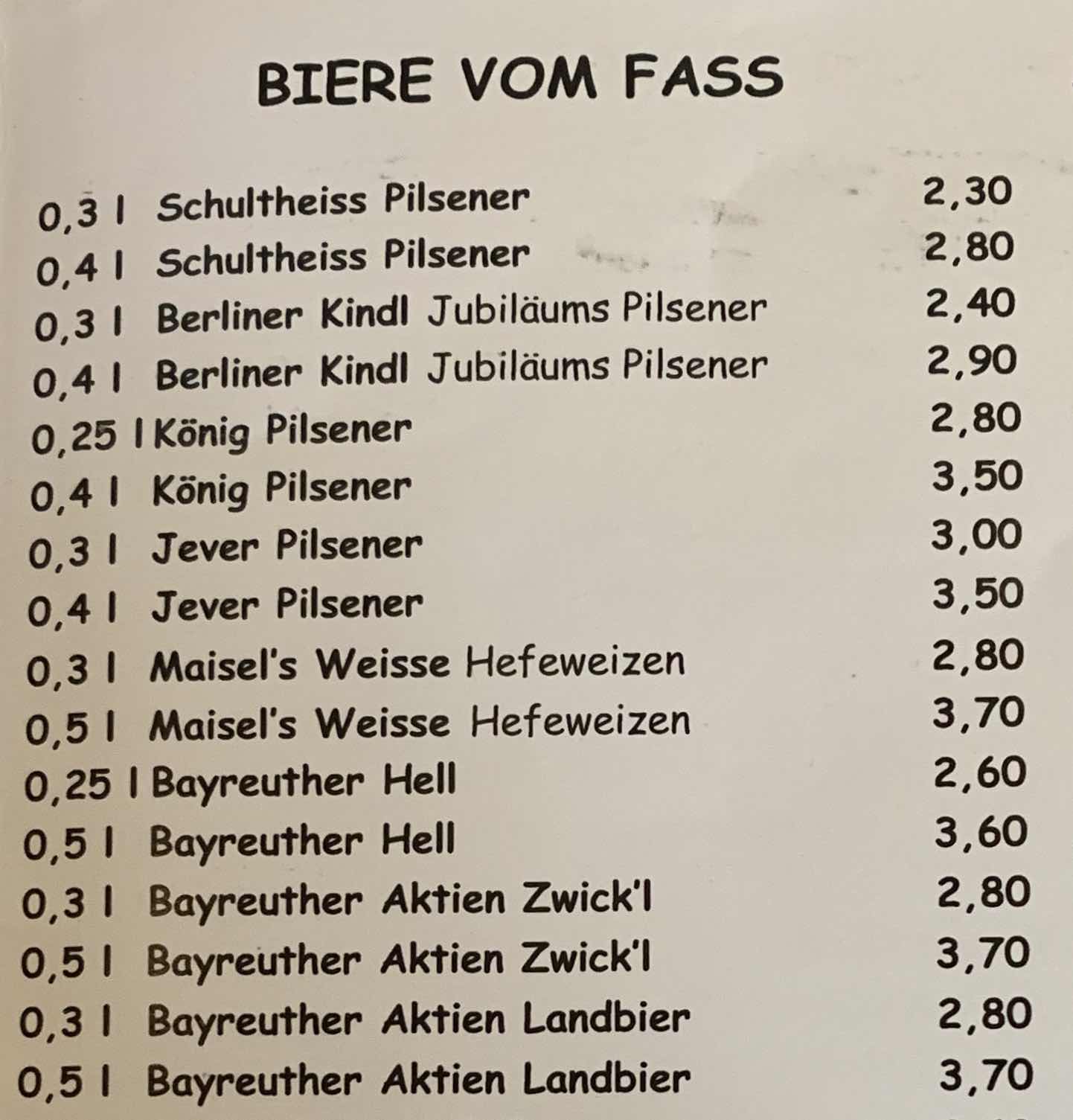 I spend a good part of the rest of the afternoon doing boring non-beer errands. I did come across one interesting thing: 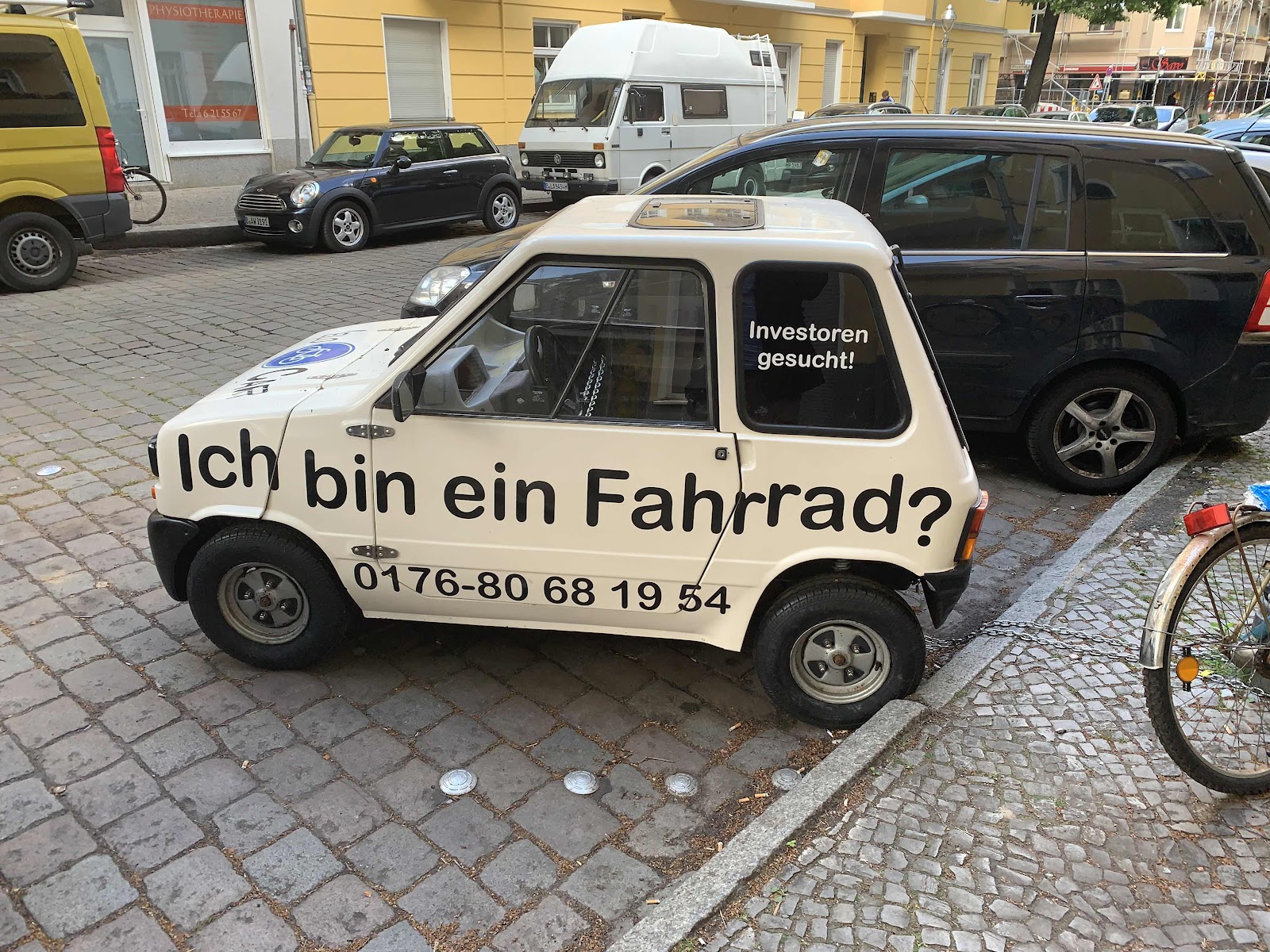 I peeked in and sure enough there were pedals. I hope it has an electric assist because I bet that sucker is heavy. I don’t know if the license plate is real but I thought it cool as well... 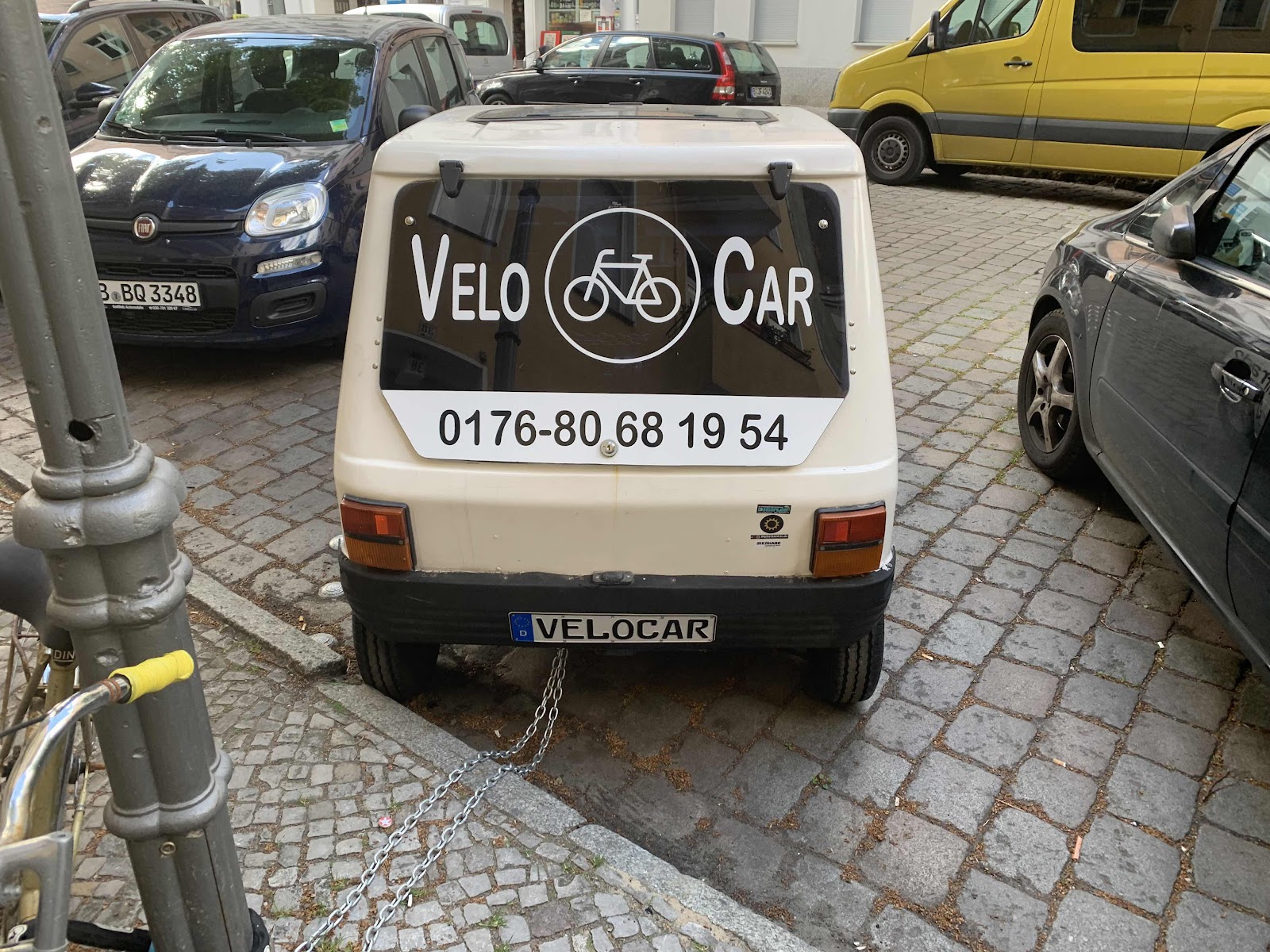 I ended up in Neukölln at a place called Becherek that somebody mentioned might have an interesting beer. 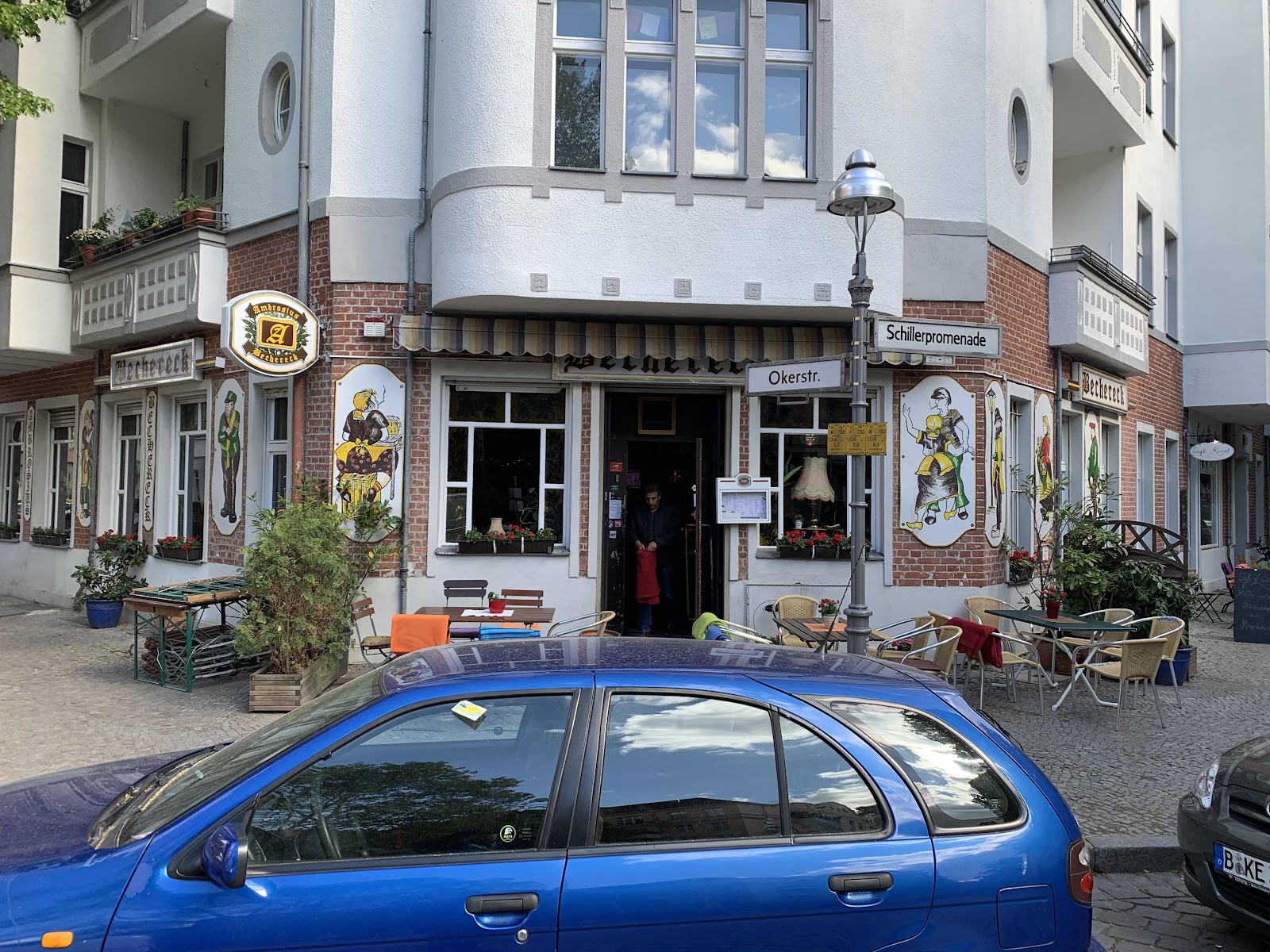 They had two “house bees” a pils and a dunkel. I asked the man inside (the husband of the owner, who was on a “Girls Night Out” vacation) where the beer was brewed and he would only say Bavaria. I tried the pils. 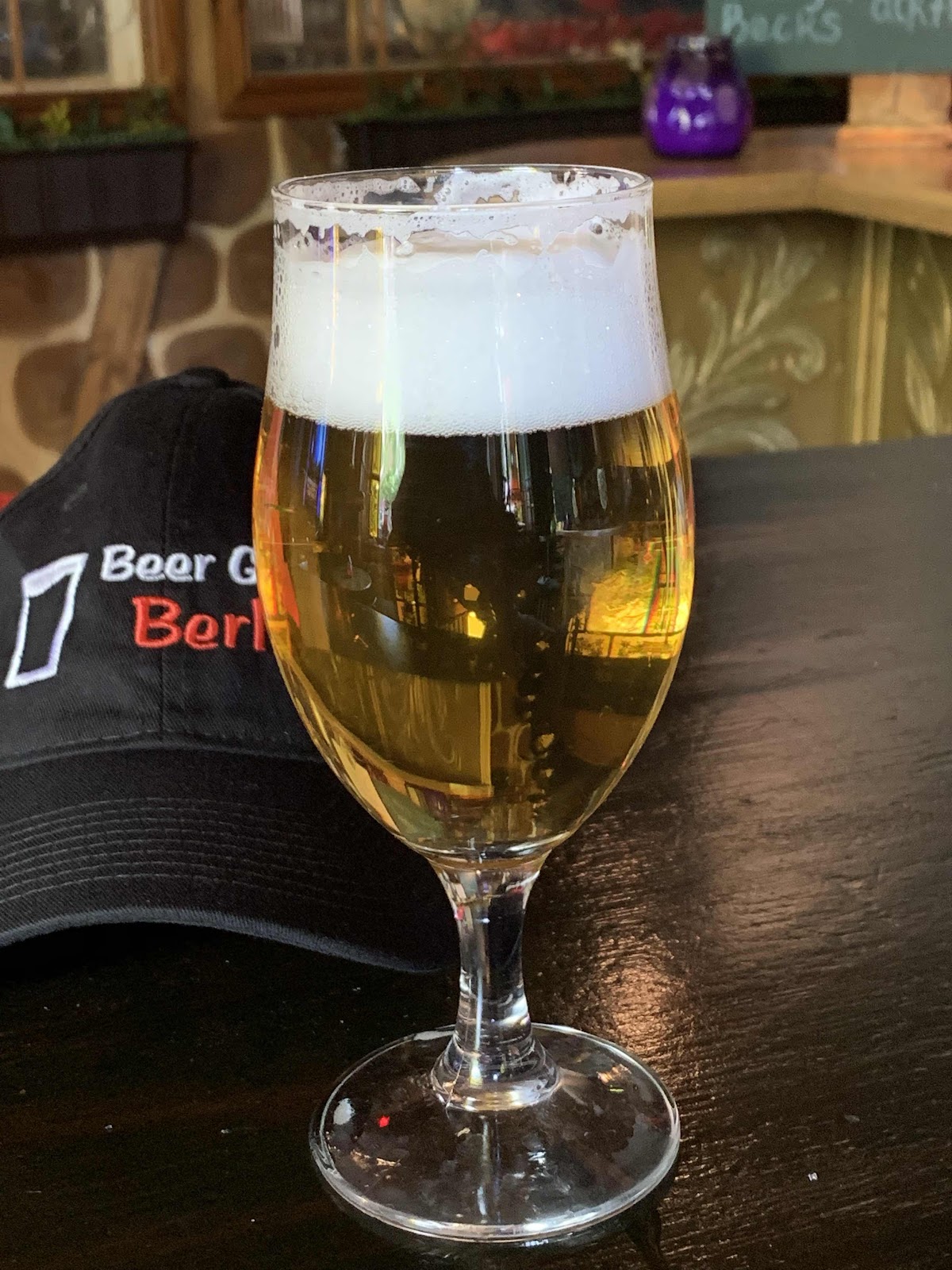 It was drinkable but not all that interesting. Looking around at some of the tables and I saw all the beer coasters (beer mats) were from Löwenbräu München and it wouldn’t surprise me that the beer was as well.  I did like their “Soup of the Day” 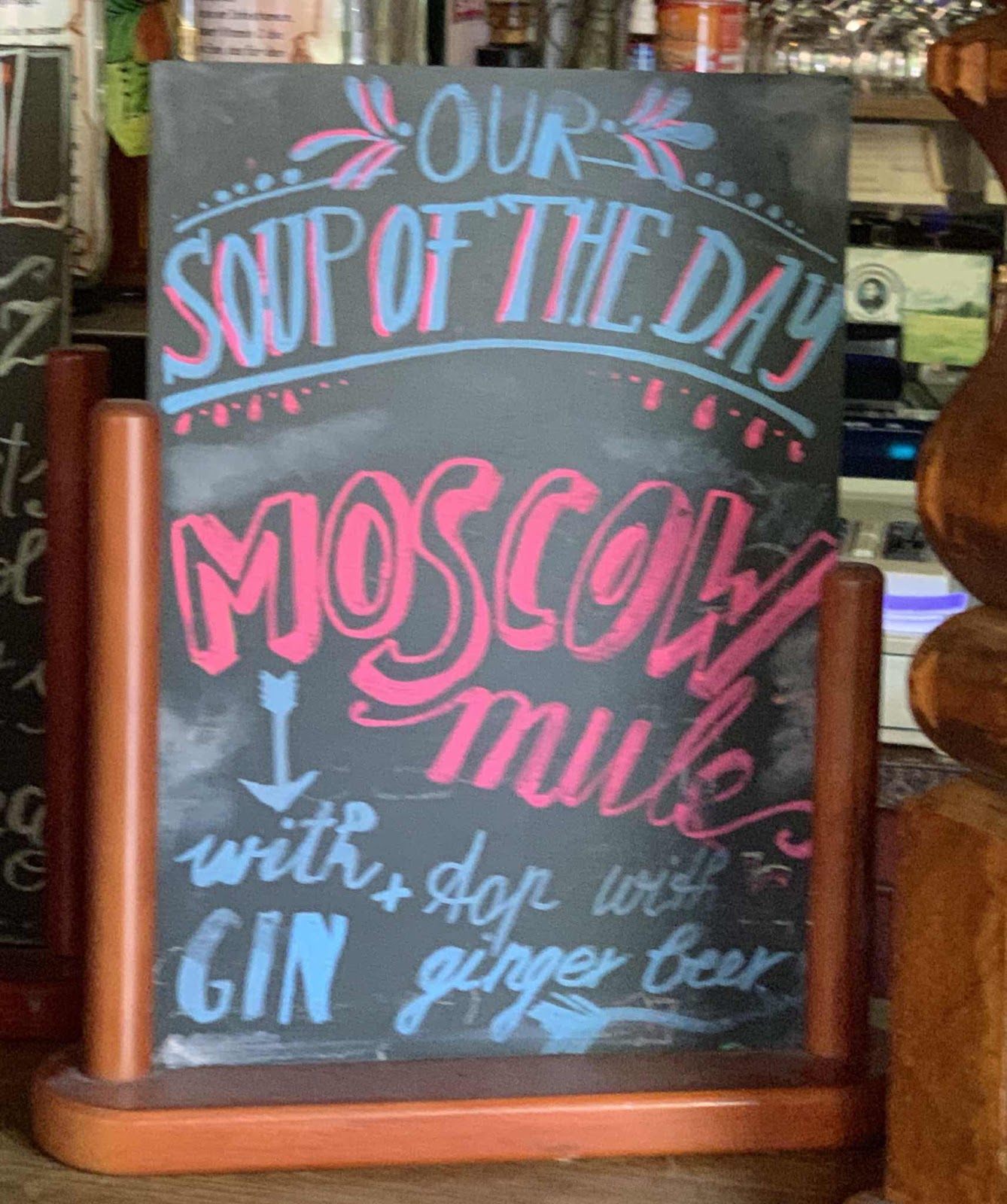 The house specialty was about 25 different home made flavored spirits— there were jars all over the bar that I assume had various things soaking in them. He gave me a sample of the “Sweet Ginger” and it was very good, probably very dangerous as it would go down quickly. 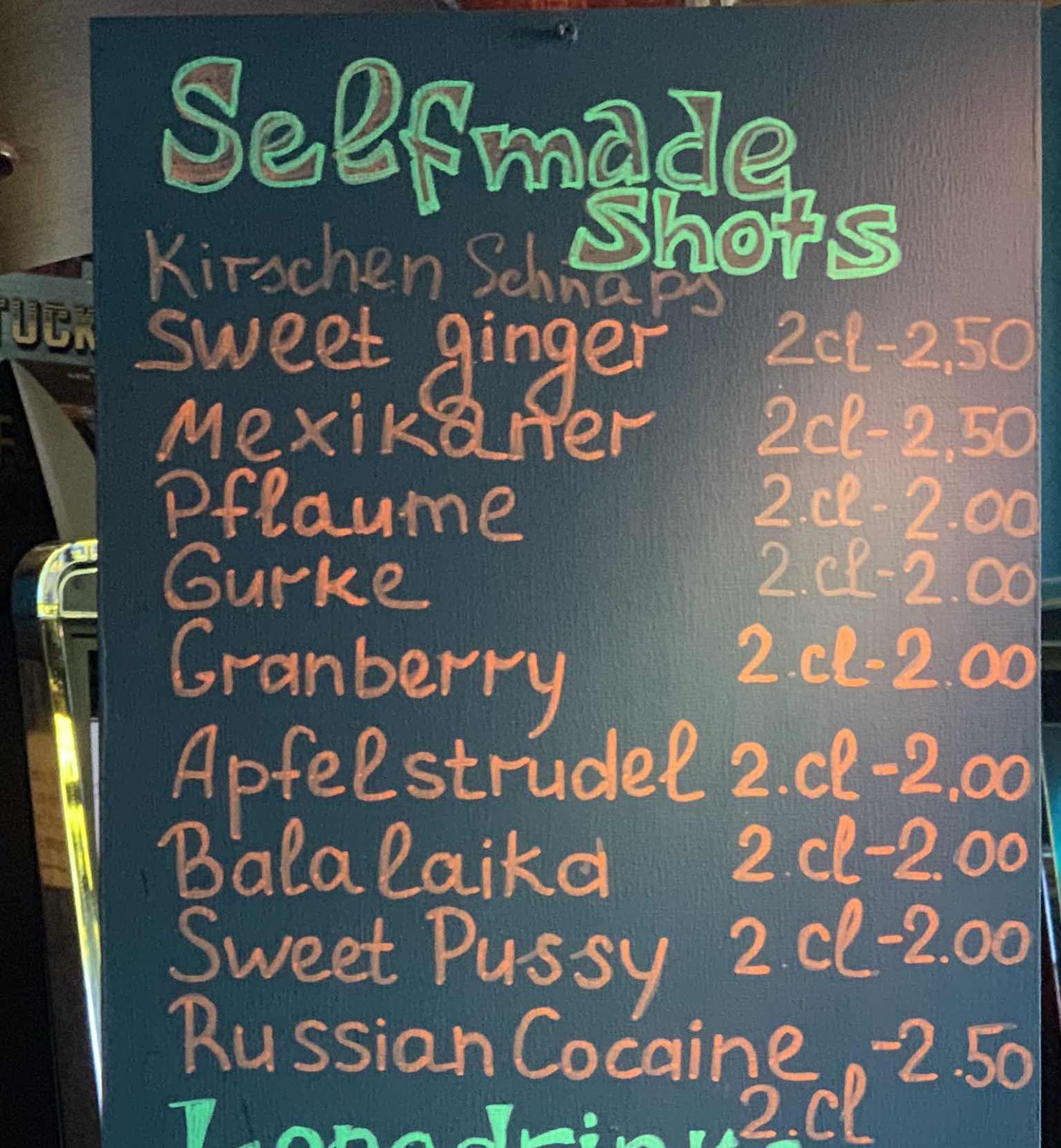 It really looked like a friendly, funky neighborhood place. If they just had a better beer selection.
About a km away is Muted Horn, one of the better beer bars in Berlin. 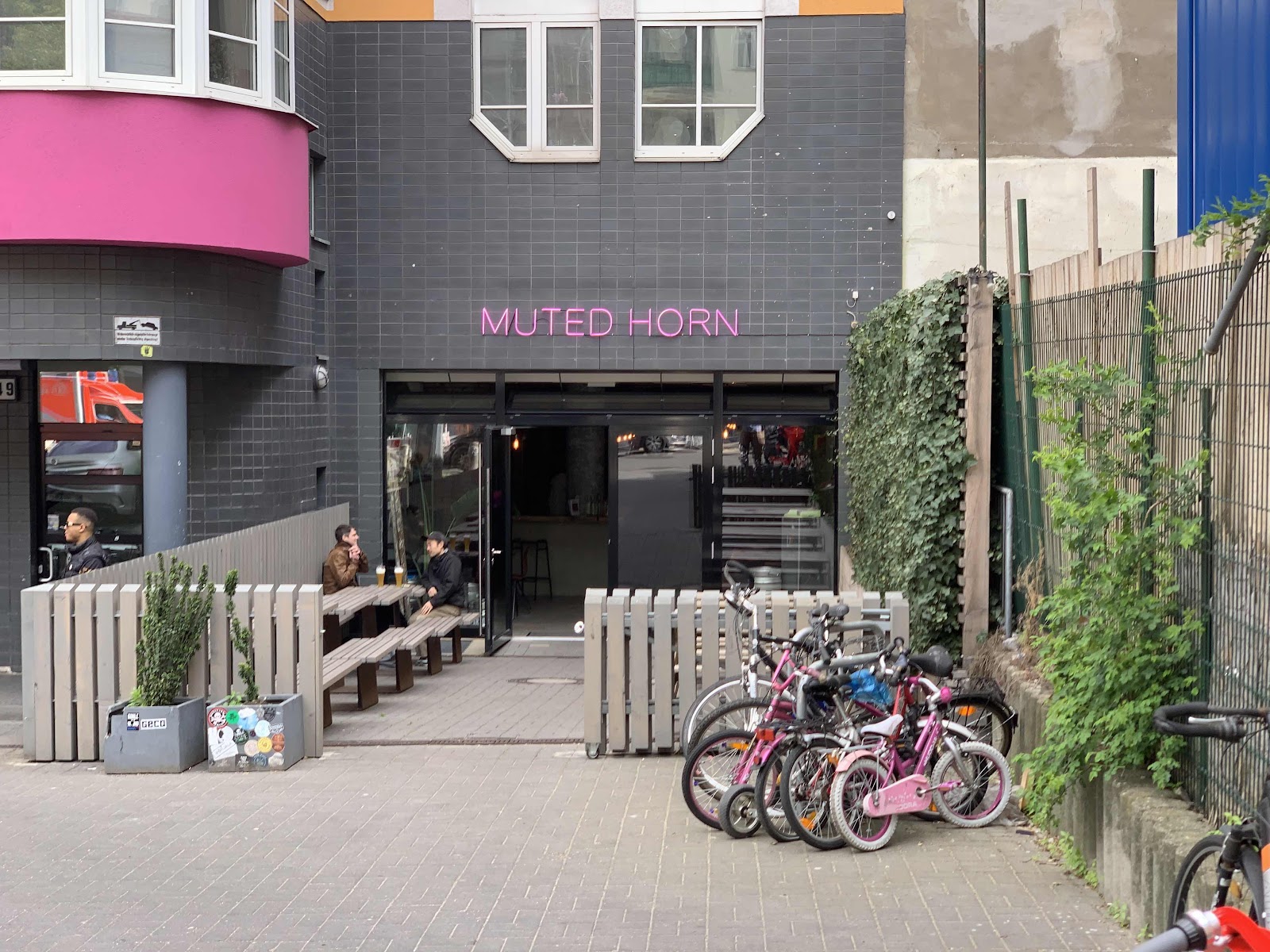 My only complaint is they have too many interesting non-German beer, leading me to breaches of the Rule. 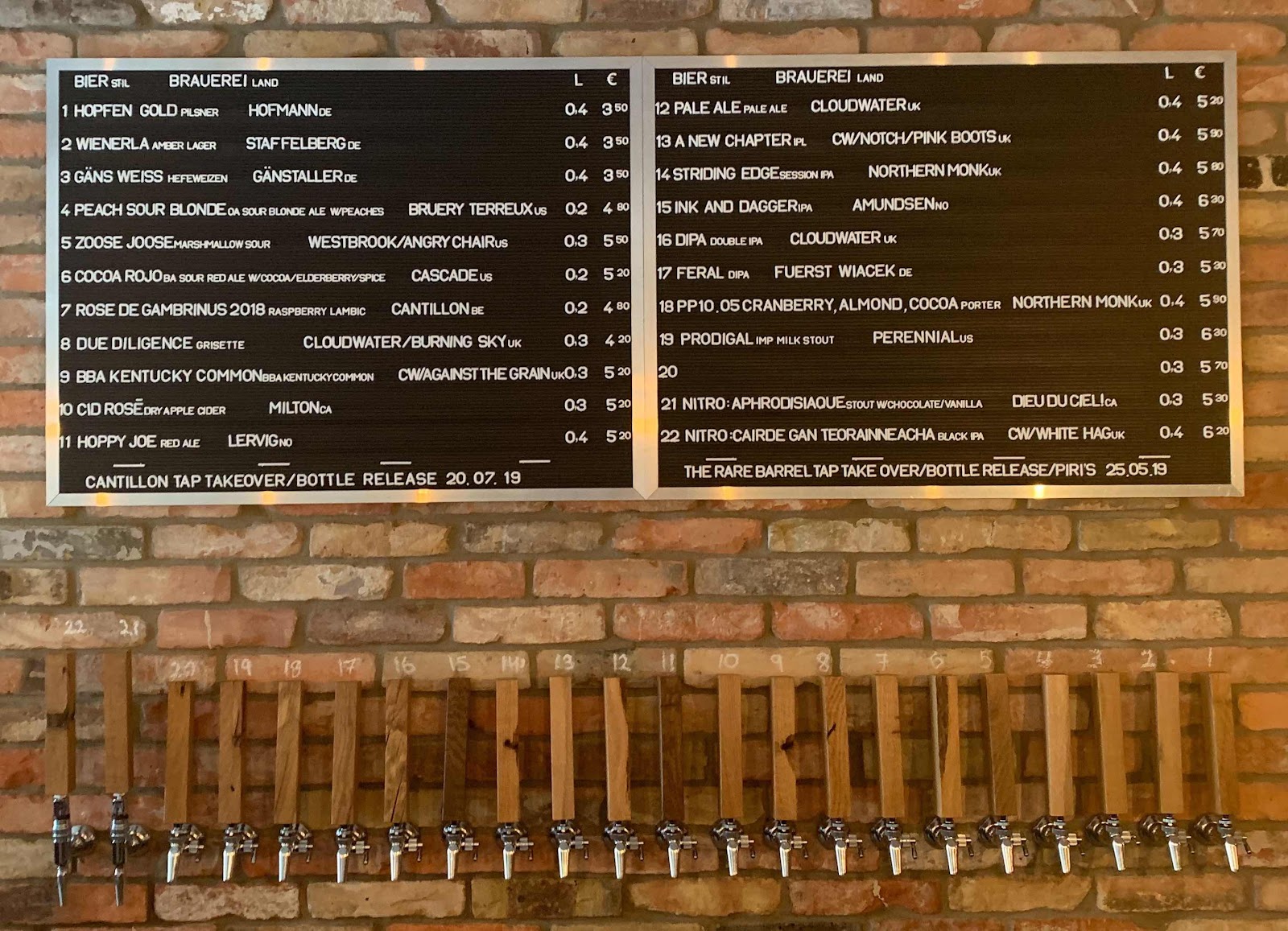 Notice the upcoming Cantillion and De Ranke tap takeovers — it would be hard to resist and just drink German beers.
I decided to go the Gäns Weisse from my old friend Andy Gänsteller. I was delicious as all of Andy’s beers are. 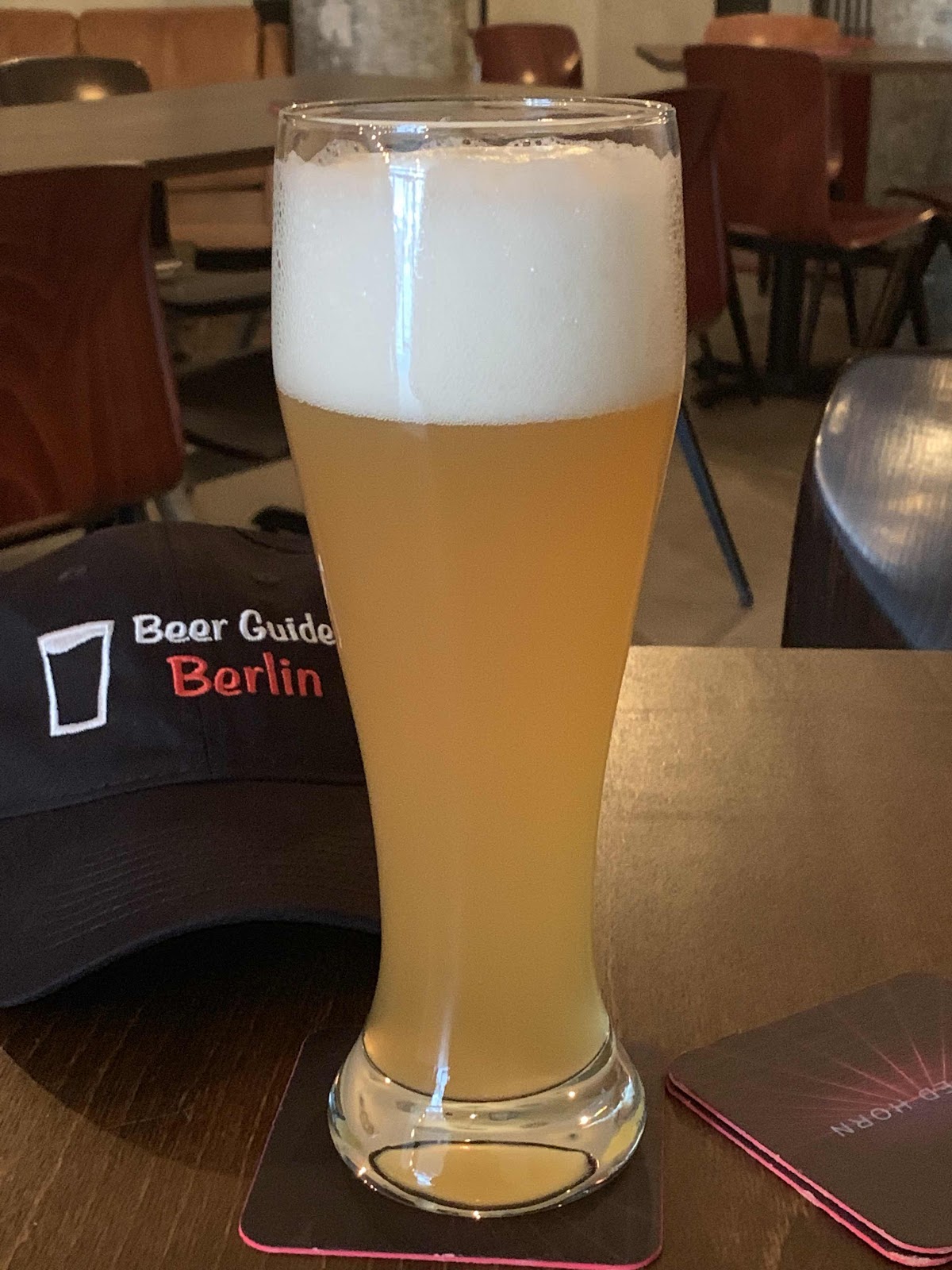 It looks like a short pour but for some reason they serve it in .4l measure in a .5l glass. Go figure.
Next up was a Weinerla from Staffelberg-Bräu in Loffeld, near Bad Staffelstein. 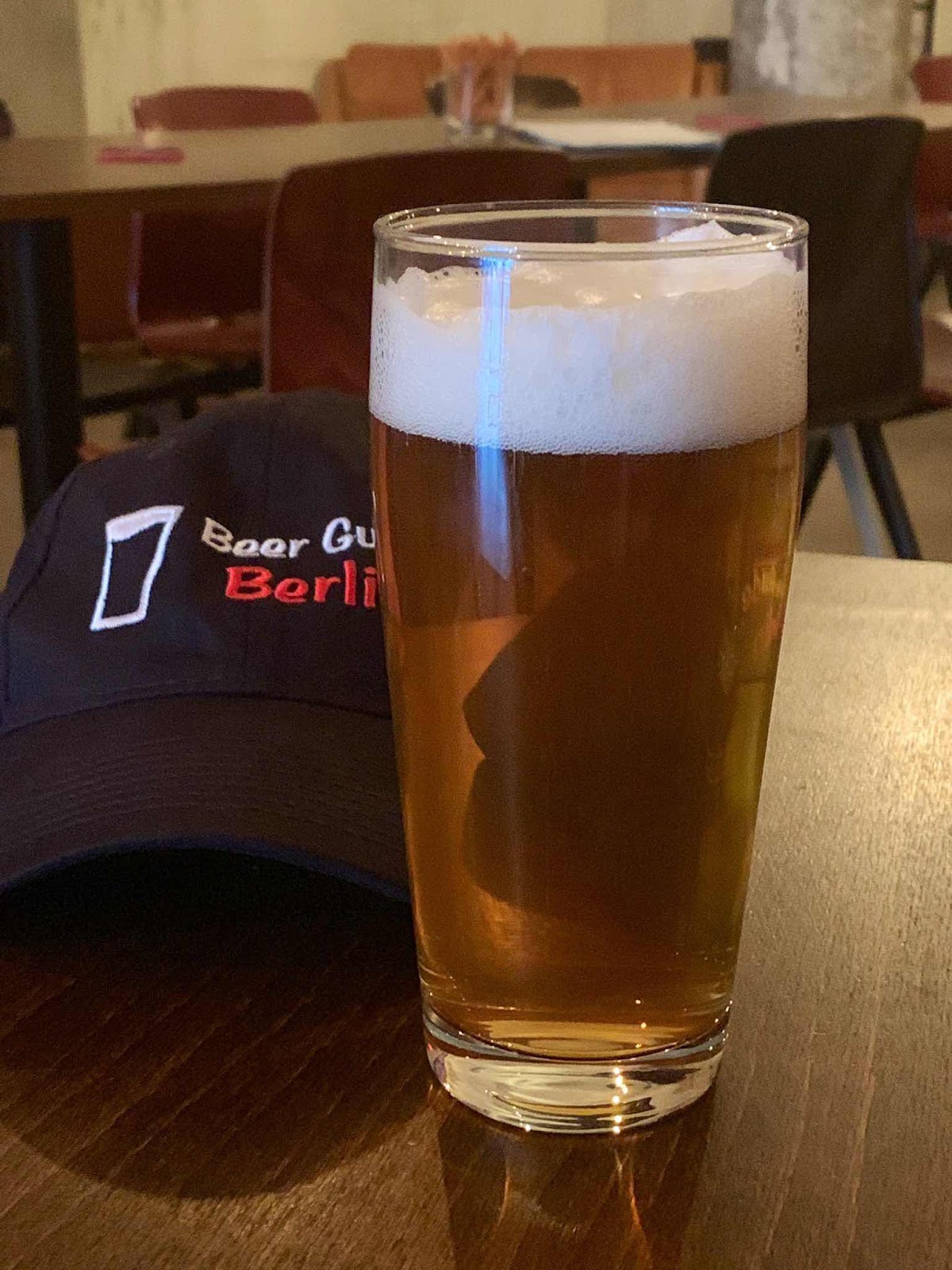 A few blocks away was a fairly new brewpub, Brauhaus neulich (yes, they second word in in lower case). When they first opened there were reports that the beers had issues. So I decided to see if that was still the case. 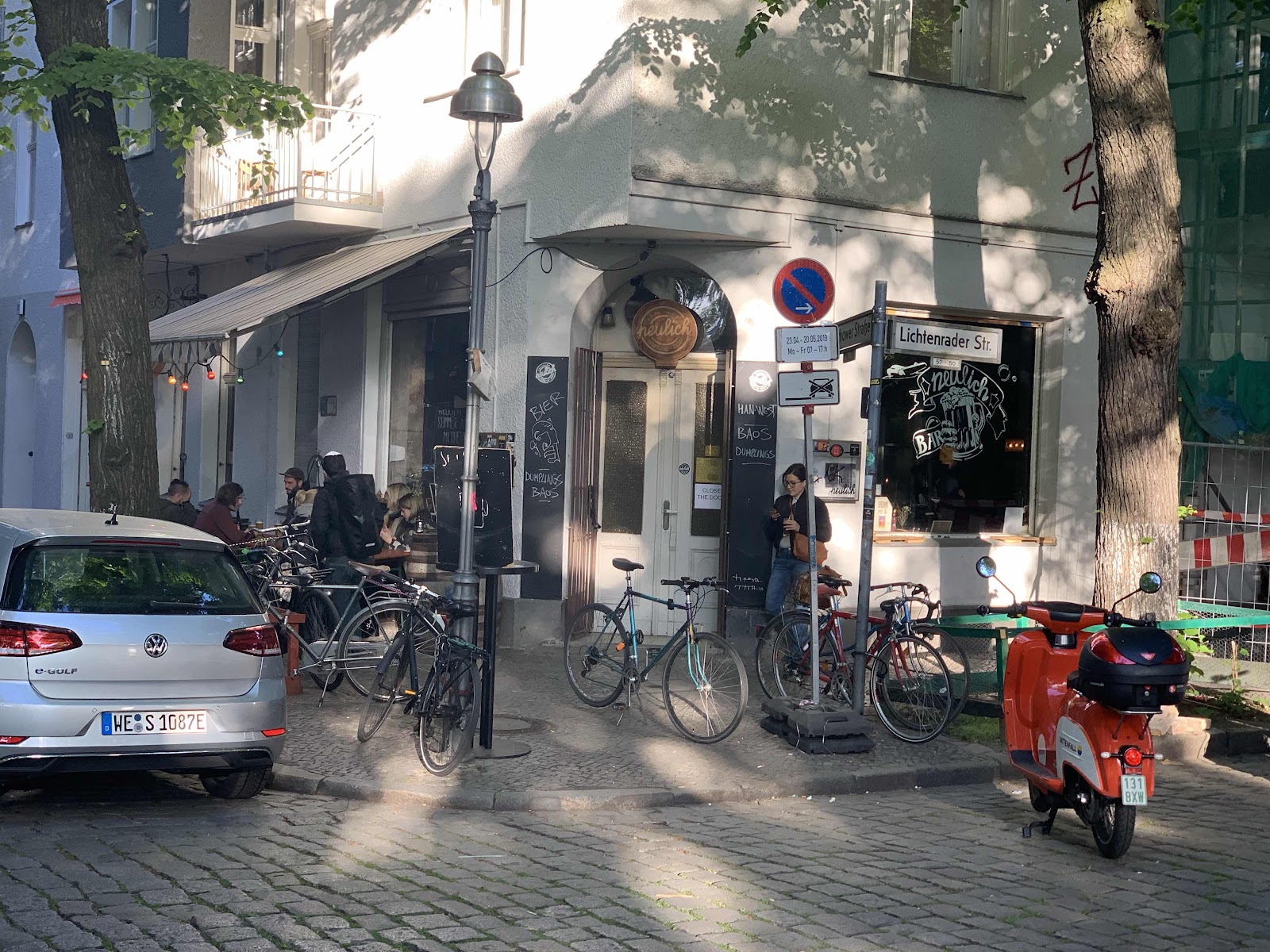 They had 7 beers on tap, having recently run out of their Eisbock and had not yet replaced it. 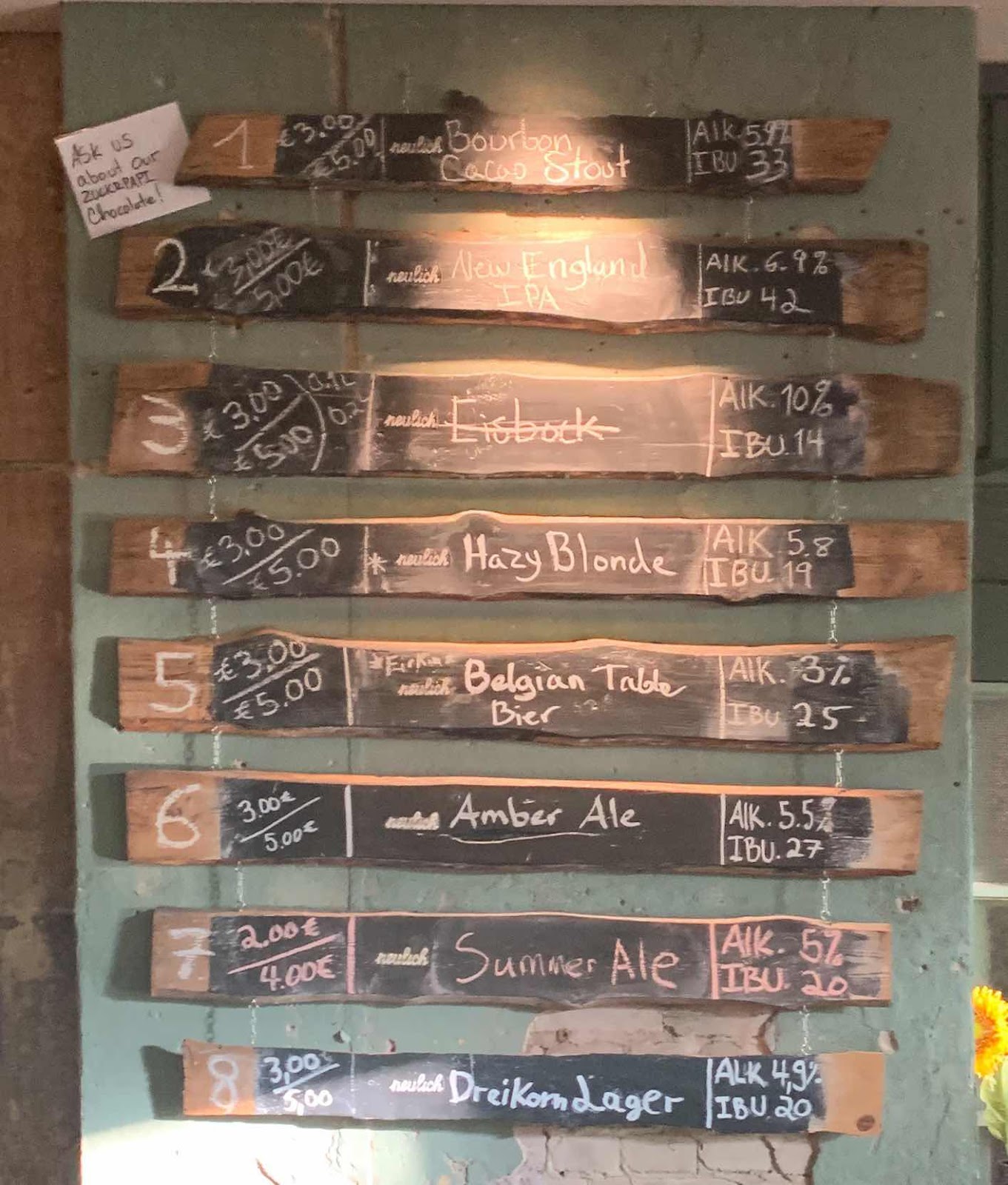 I decided to start with the DreiKorn Lager — which was made with barley, wheat and rye.  In the old days that would not be legal as bottom fermented beers had to be 100% barley malt. So either things have relexed,  they are breaking the beer tax laws or it was actually top fermented beers. I have had beers in the Rhineland that were top fermented and called “Lager” so that was not out of the realm of possibility. 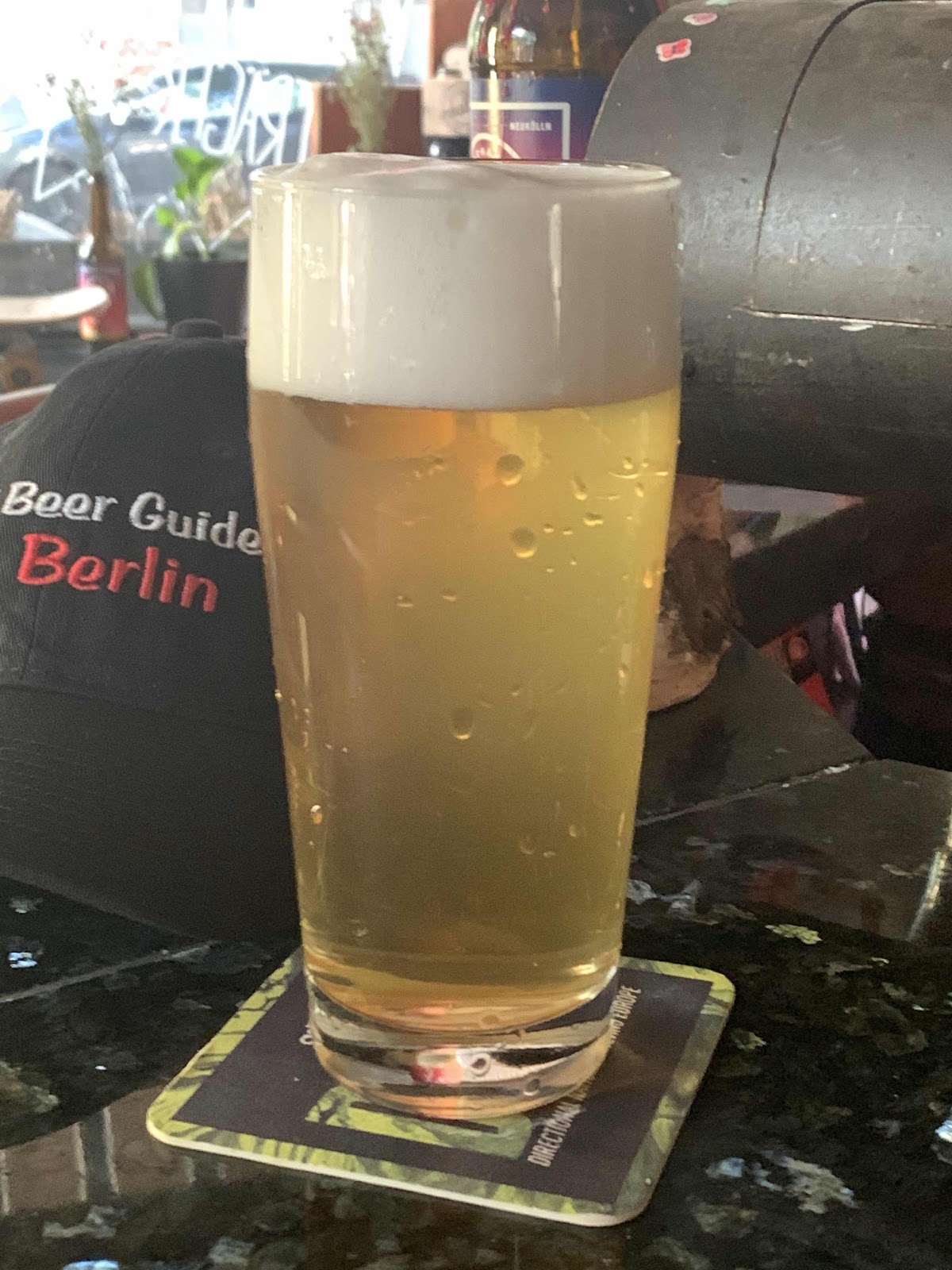 The first two thirds of the beer were fine. On the last third (I guess as it warmed up) I was picking up a hint of something. I wasn’t actually objectionable, just out of place. Didn’t stop me from finishing it.
Next I ordered the Amber Ale. 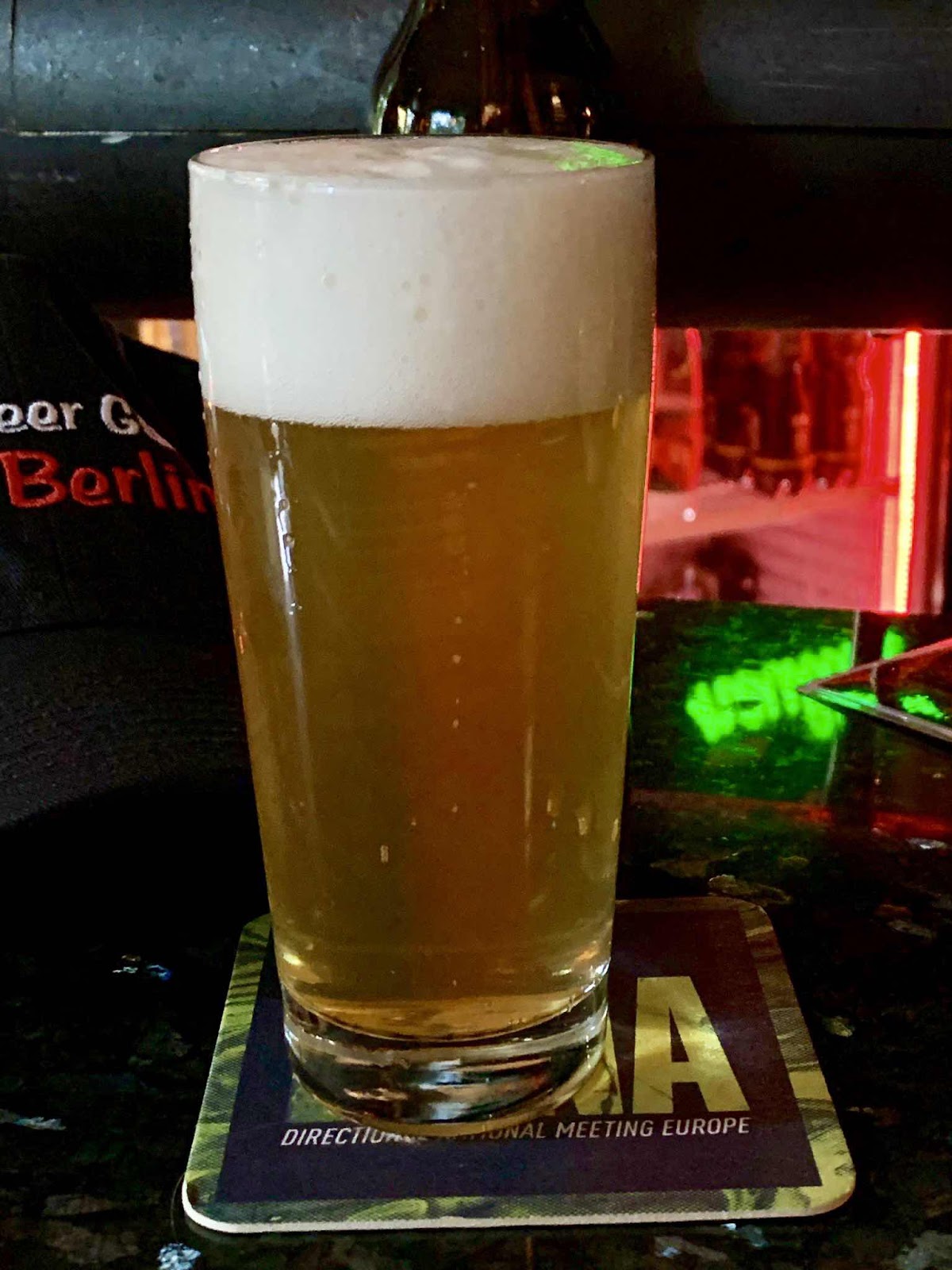 When it came it seems a bit light and it turns out the bartender heard “Summer Ale” so that is what I got. No big deal, as I almost ordered that. I too had a bit of the that same “something” so I guess we can call it a “house flavor.”
I thought about stopping back in at Muted Horn but I had a morning train to Prague and I might get too distracted. Near the U-Bahn entrance was Kiosk44, a “Späti” that carried the Nordberliner Pils that a friend (Florian) has brewed for him with is recipe. 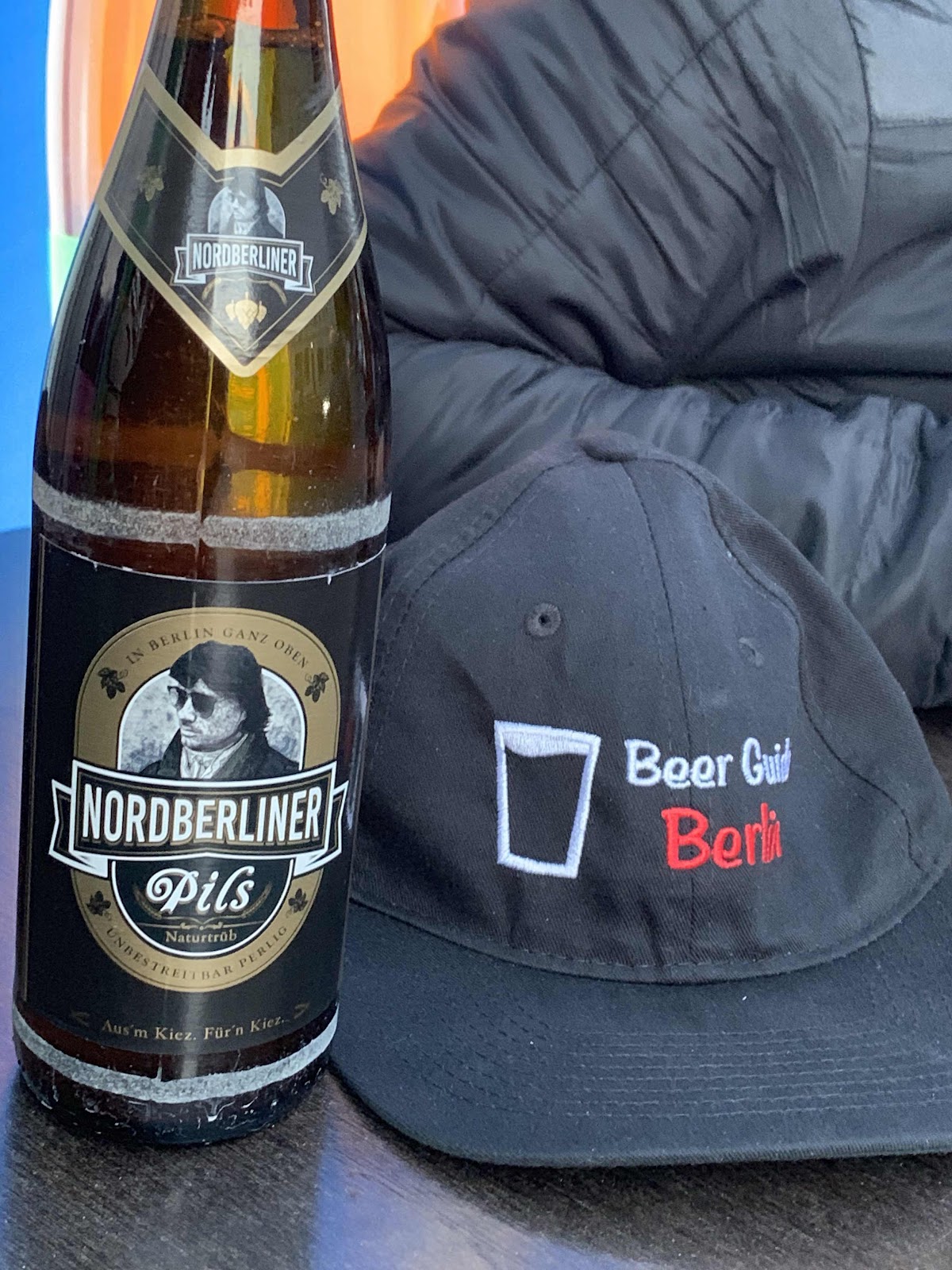 They will open the bottle for you but after that, you are on your own. They did have a couple small tables outside where you could sit and enjoy your beer, so it did. It was a very drinkable beer. Good job, Florian.
I sort of think of these places as selling mostly cheap, mass produced beer, but I was surprised at the selection 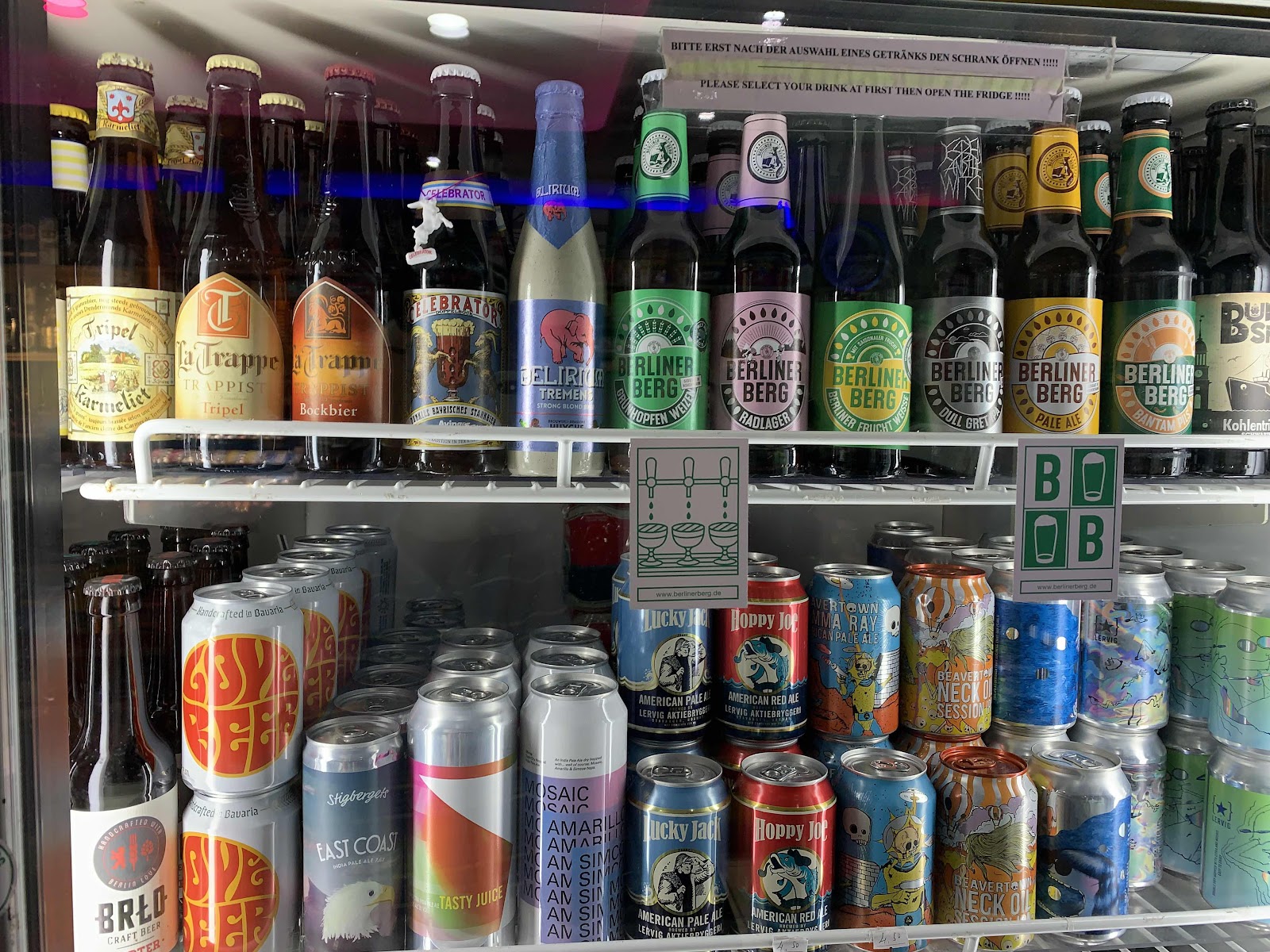 Some of those cans are from Beavertown (UK) and Lervig (Norway) and To Ol (Denmark). Pretty fancy for Street Drinking.
On Wednesday I say farewell to Berlin and head for Prague. The beer drinking will continue. I’ll do a recap of Berlin in a couple of days after I’ve had time to process it a bit.
(Writen on the train to Prague with decent WiFi on board)
Posted by The Mad Brewer at 3:28 AM

Both Altbier and Kölsch are top fermented lagers in my book, but I get bashed when I say so.

Again Fred, it was a blast to meet up! Have a great time in Prague! We will write when you back to the states bout the "missed" objects in B and i will do some tours with pic :)