Prague is not an early drinking town, which was OK today because I was getting a late start. Around noon I headed for the nearby Blah Blah Coffee and Craft Beer. 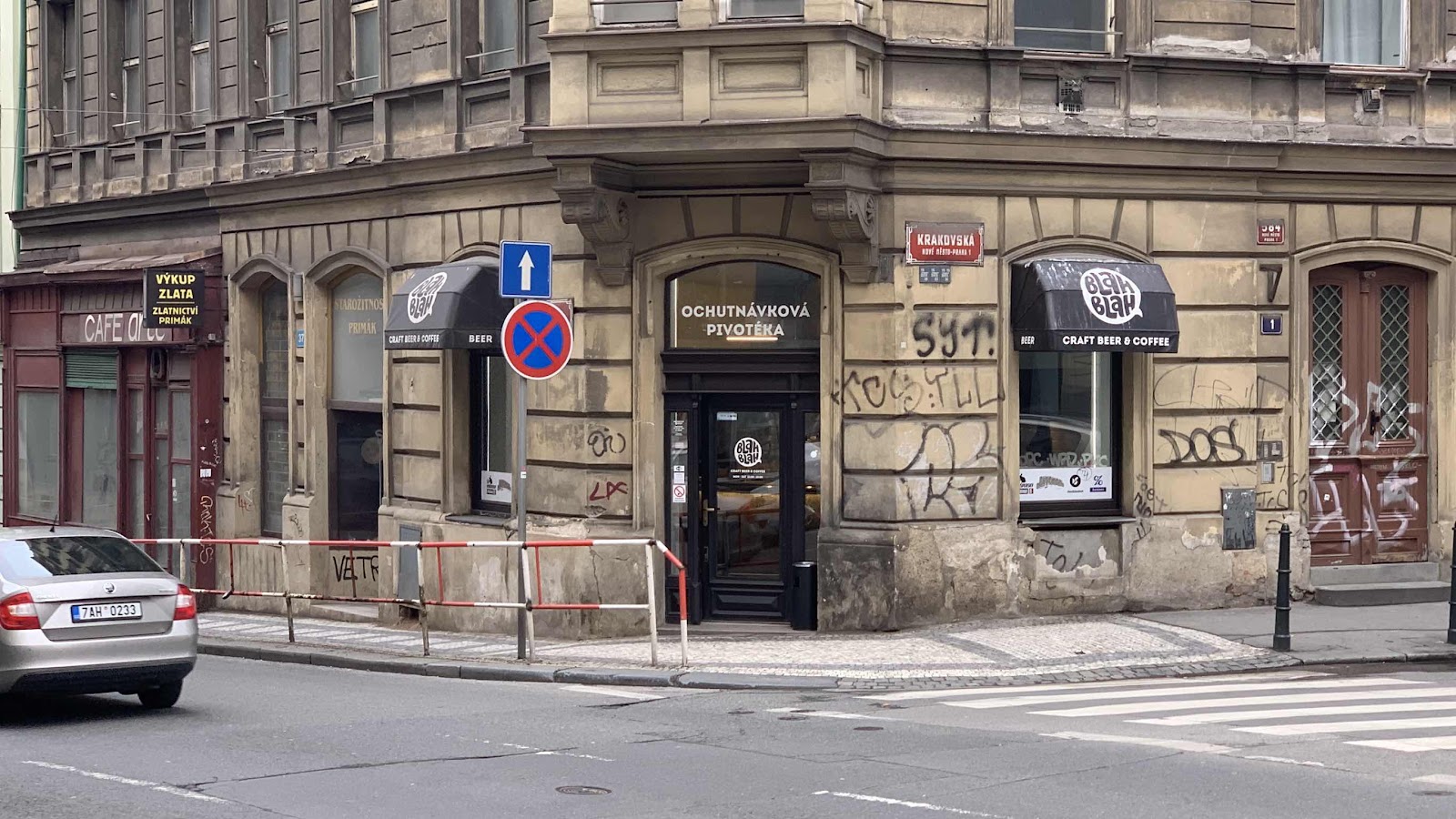 It is connected to the nearby Blah Blah Cocktail Bar. Despite being on the corner, it actually is very tiny inside, really just a bar with maybe 8 stools and some room to stand.
There were four beers and one tap on today, one tap being empty. You can kind of read what it was thru the sticker. I probably would have order that if it had been on. Obviously lots of people had that idea. 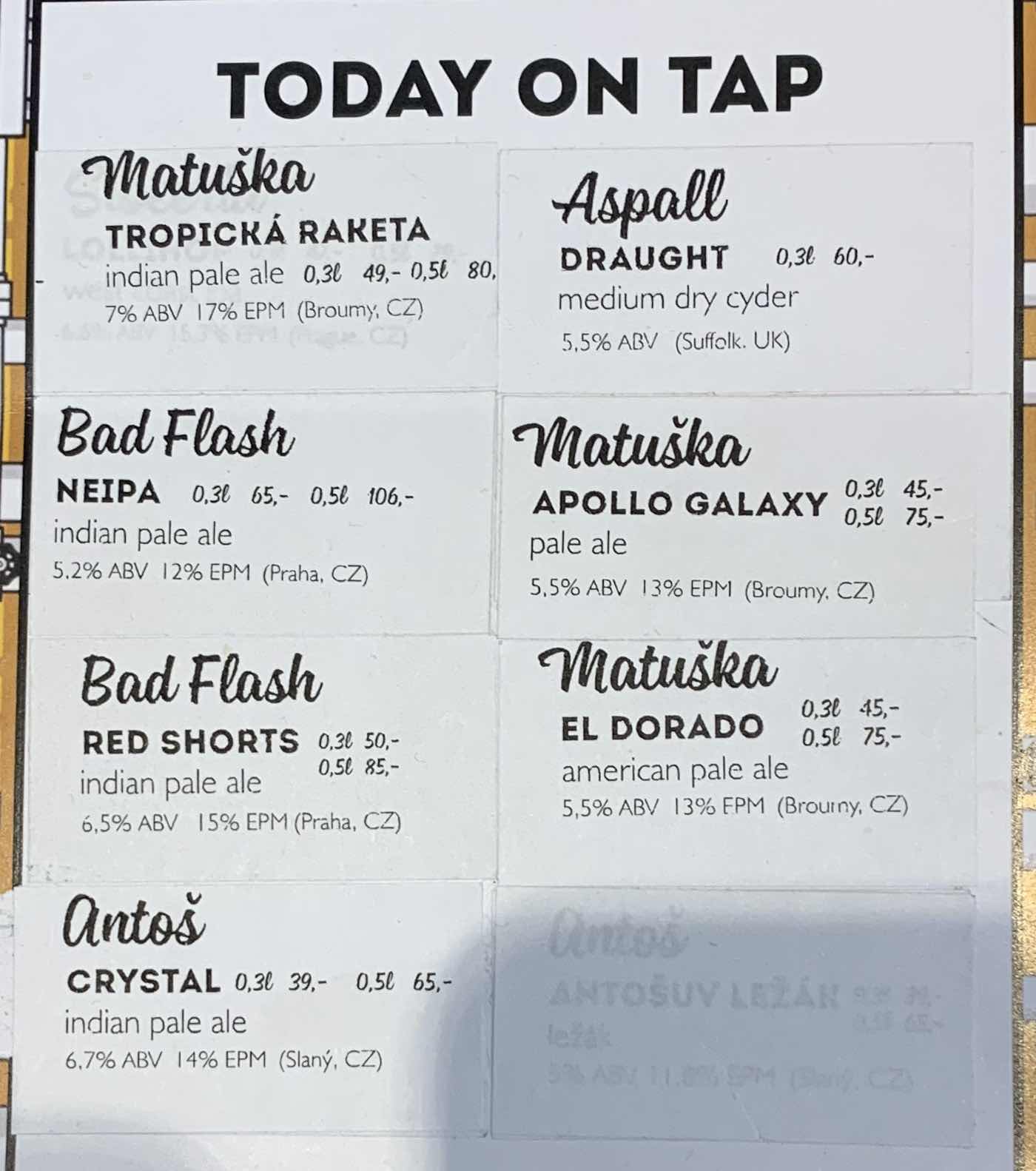 I went with the Matuška El Dorado 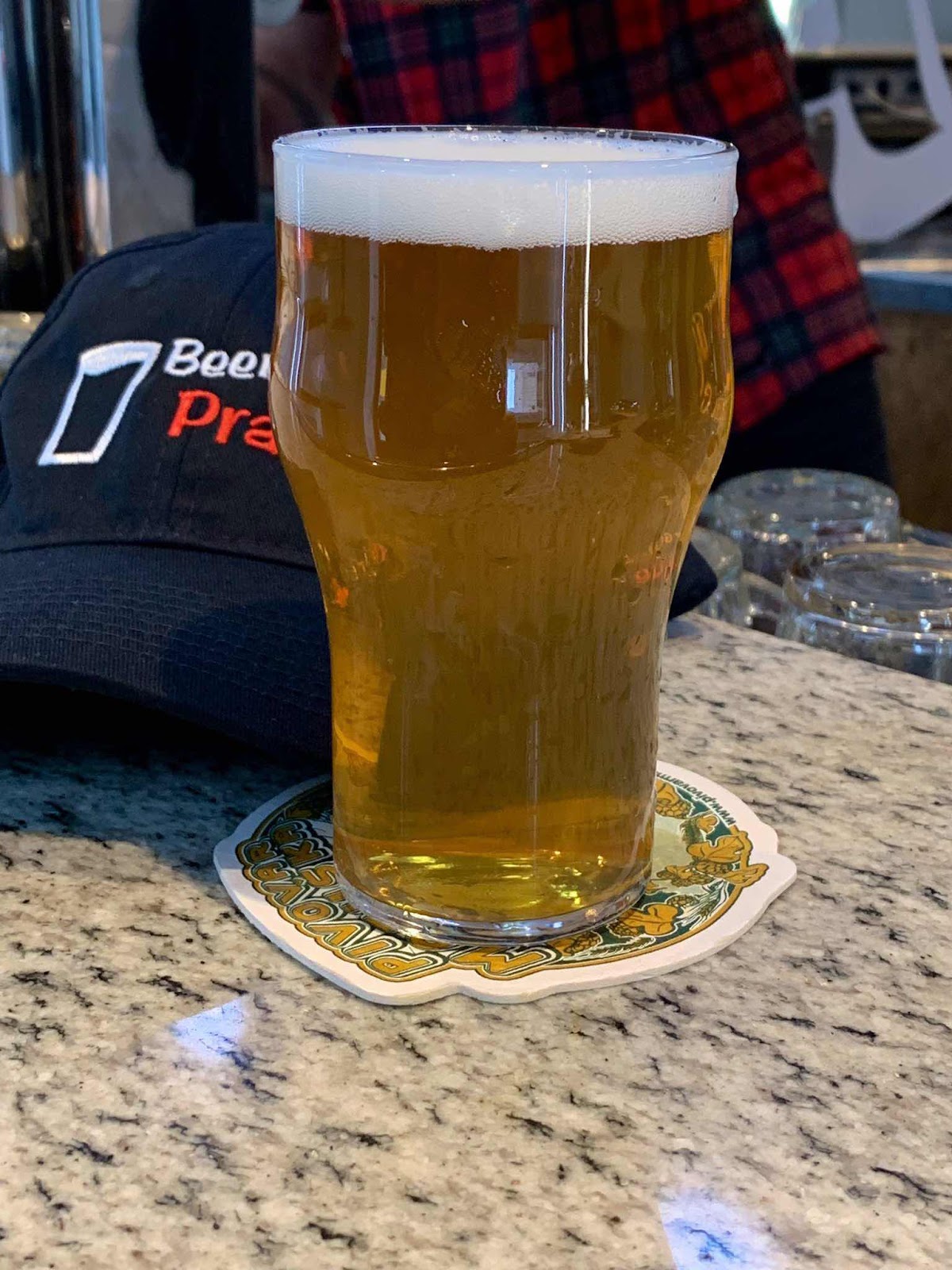 It was a perfectly fine American Pale Ale. If you told me it was brewed in California I wouldn’t be surprised and I guess that is a credit to the brewer as I expect that was what he was shooting for.
They also have a good selection of bottles, with Cantillon, De Molen and Brassie de la Senne among then. A bunch of Flying Dog as well. 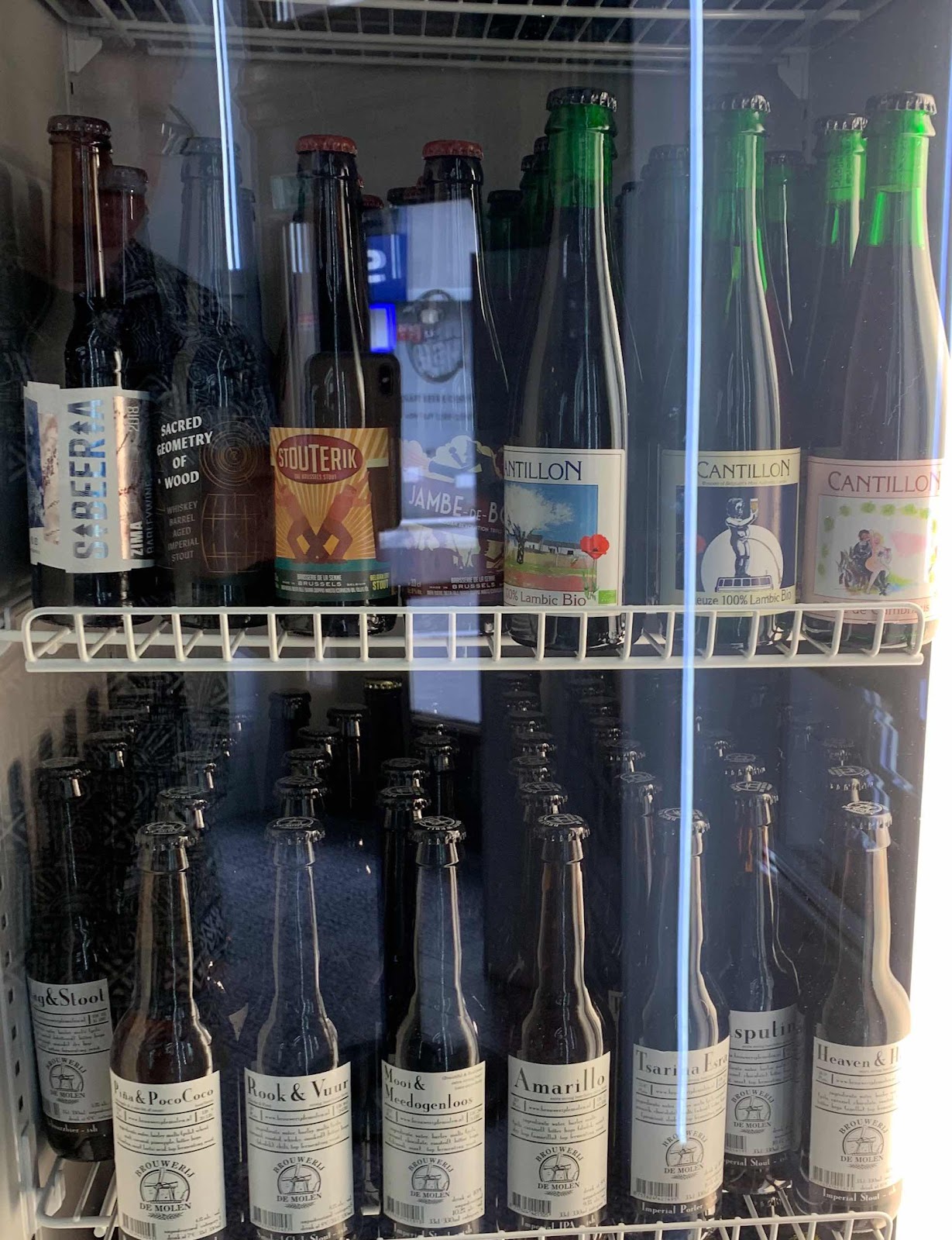 Suitable fortified, I caught a tram across the river and was soon at Andělský Pivovar 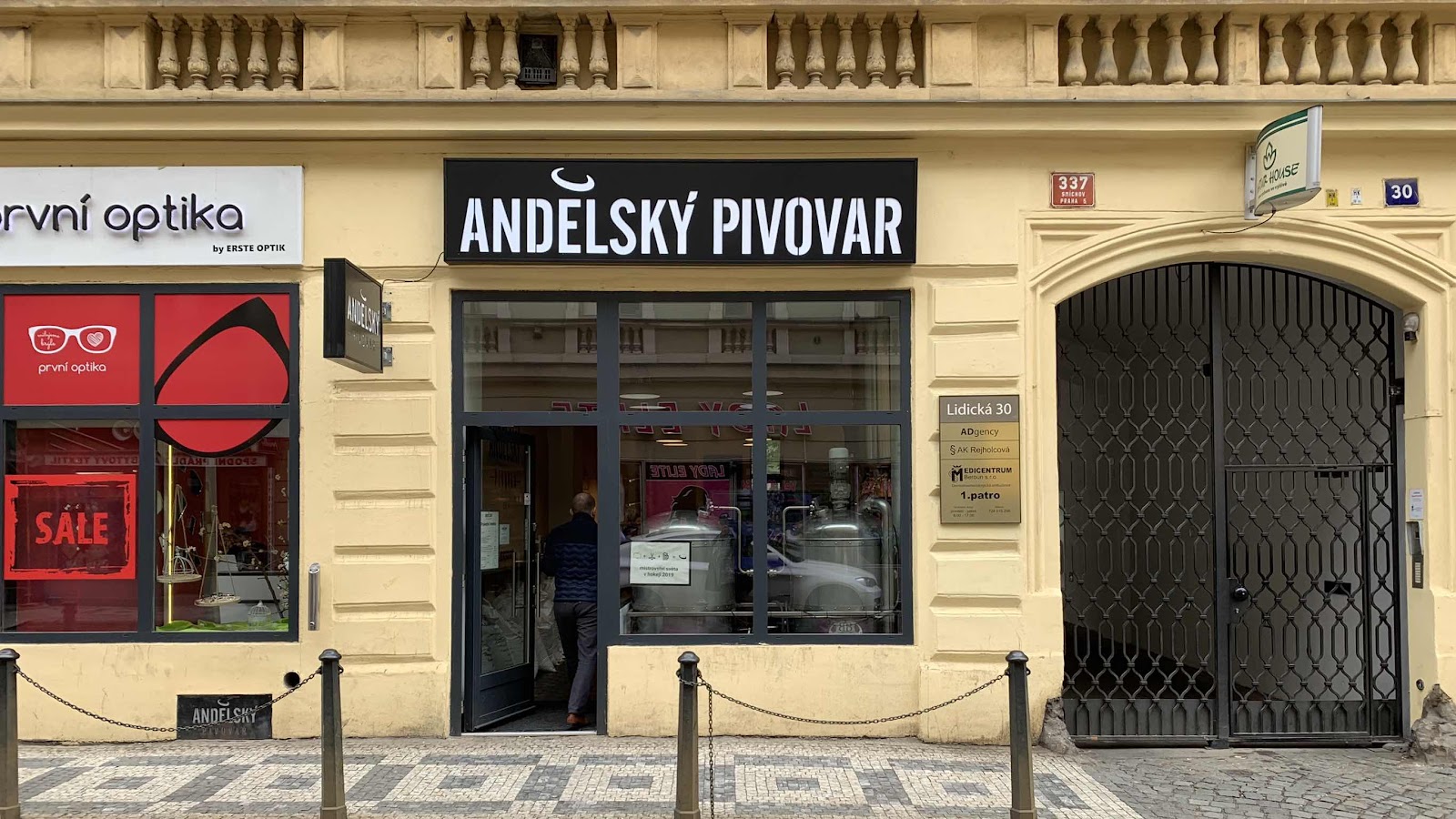 It looks very small — and it is on the ground floor but the basement is quite large and nicely appointed.
They had three of their beers on and one guest beer, an Earl Grey IPA but I didn’t catch the brewery. It is a little hard to see but they have those wonderful side pull tap handles that are really important to getting that perfect Czech pour. 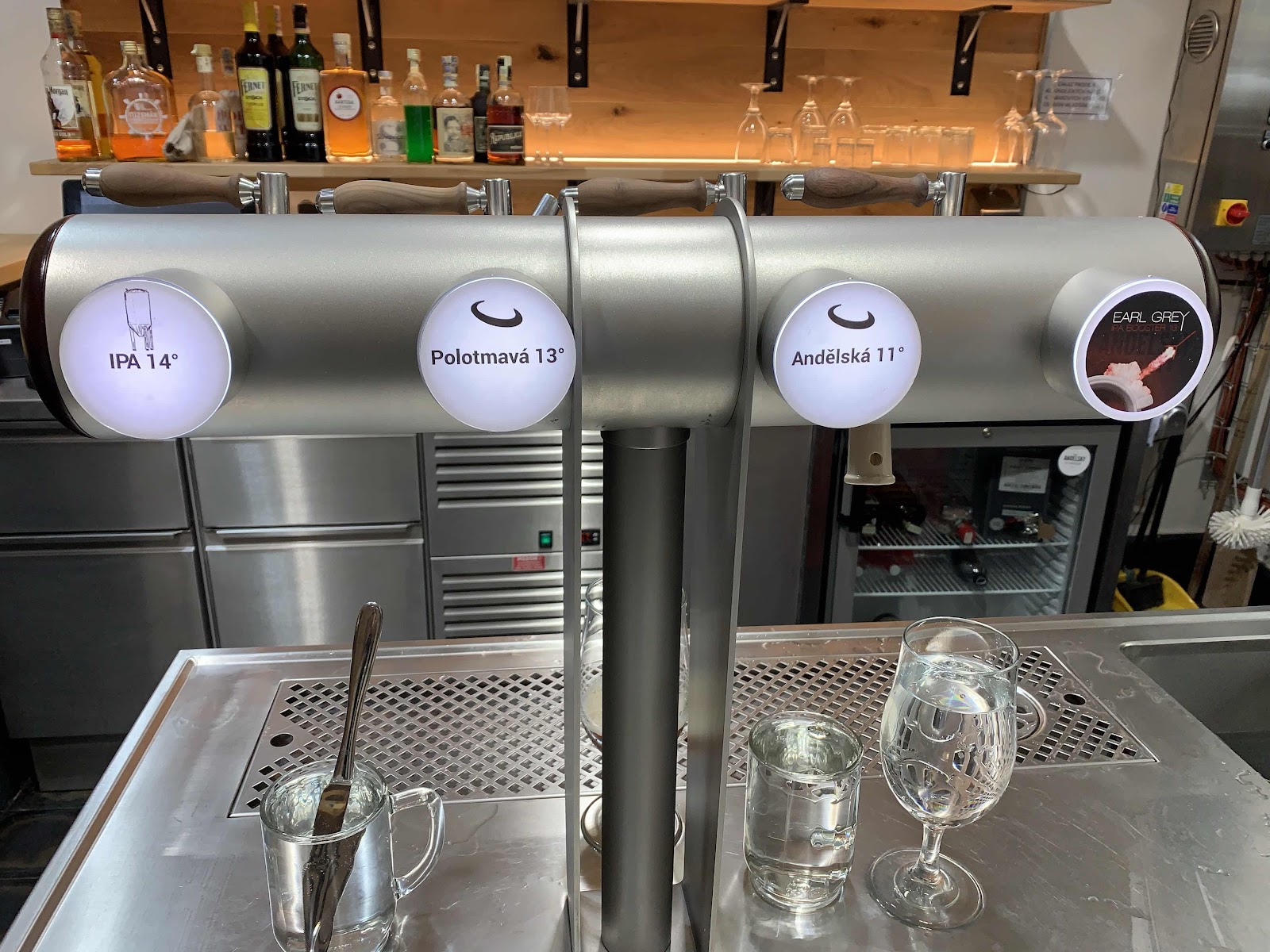 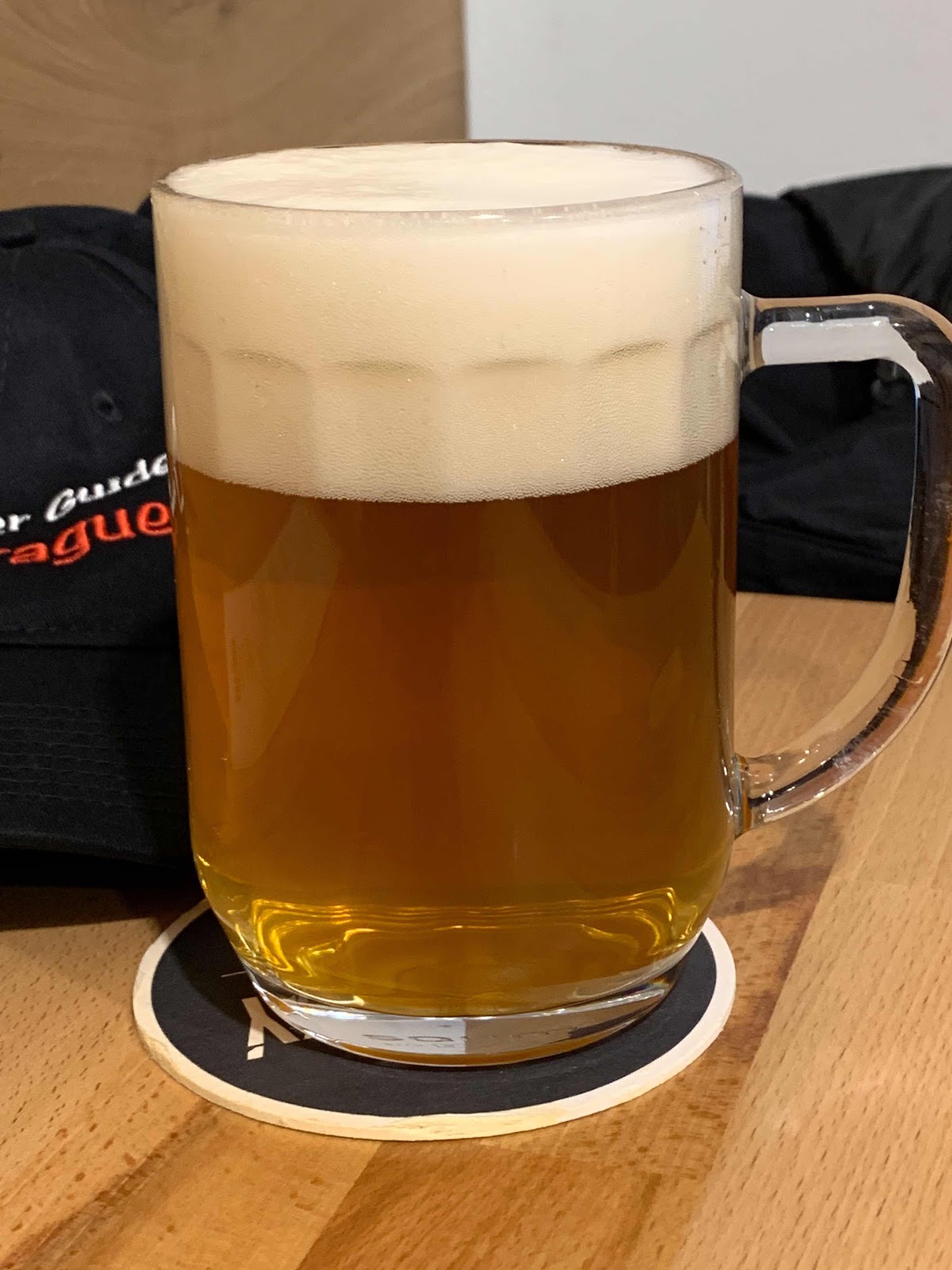 That is a pretty beer and it tasted as good as it looked. The menu was only Czech (not a complaint!) and with my limited knowledge and a little bit of Google Translate I figured out one of the daily specials was pasta with ham. Sounded good, so I ordered some. 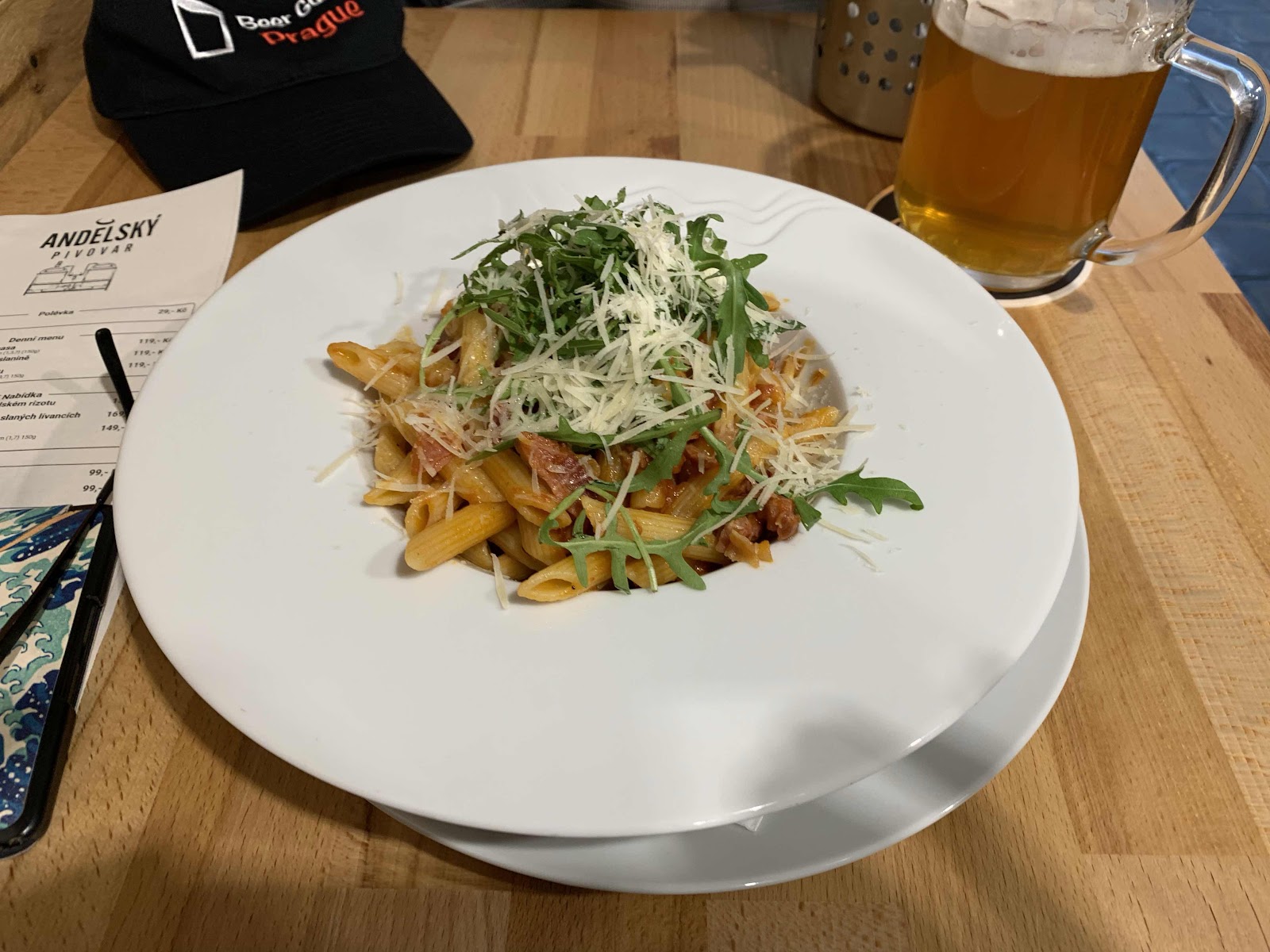 It hit the spot, gave me some energy for the travails ahead.
I decided to have another beer and had read some good reviews of the IPA so I ordered one. 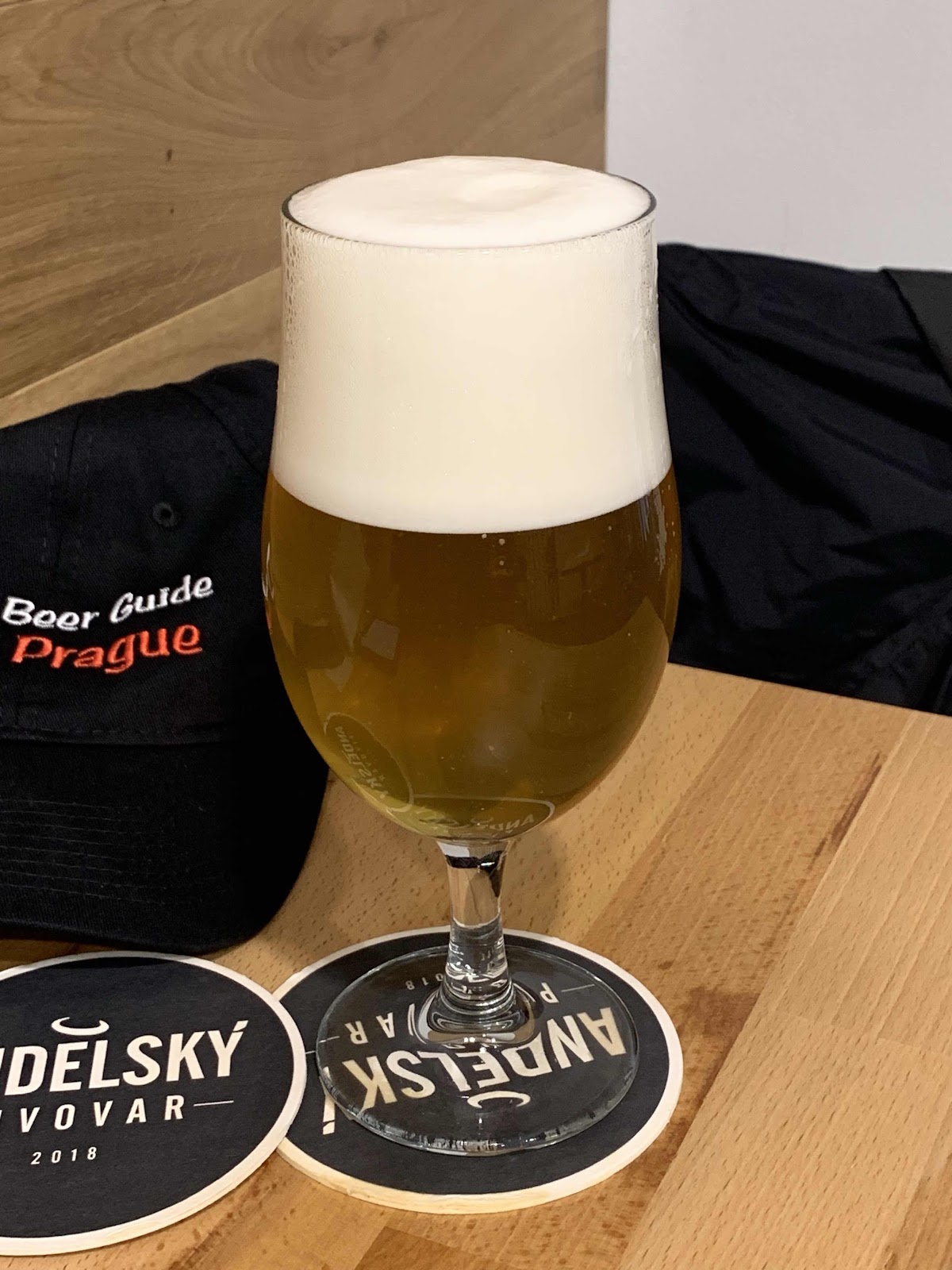 A nice beer, clean and bitter. No lactose, no orange juice, no murkiness, just the way God intended IPAs to be.

They had a nice mural on the wall explaining the brewing process, which is kind of handy if you want to learn some Czech brewing terms. 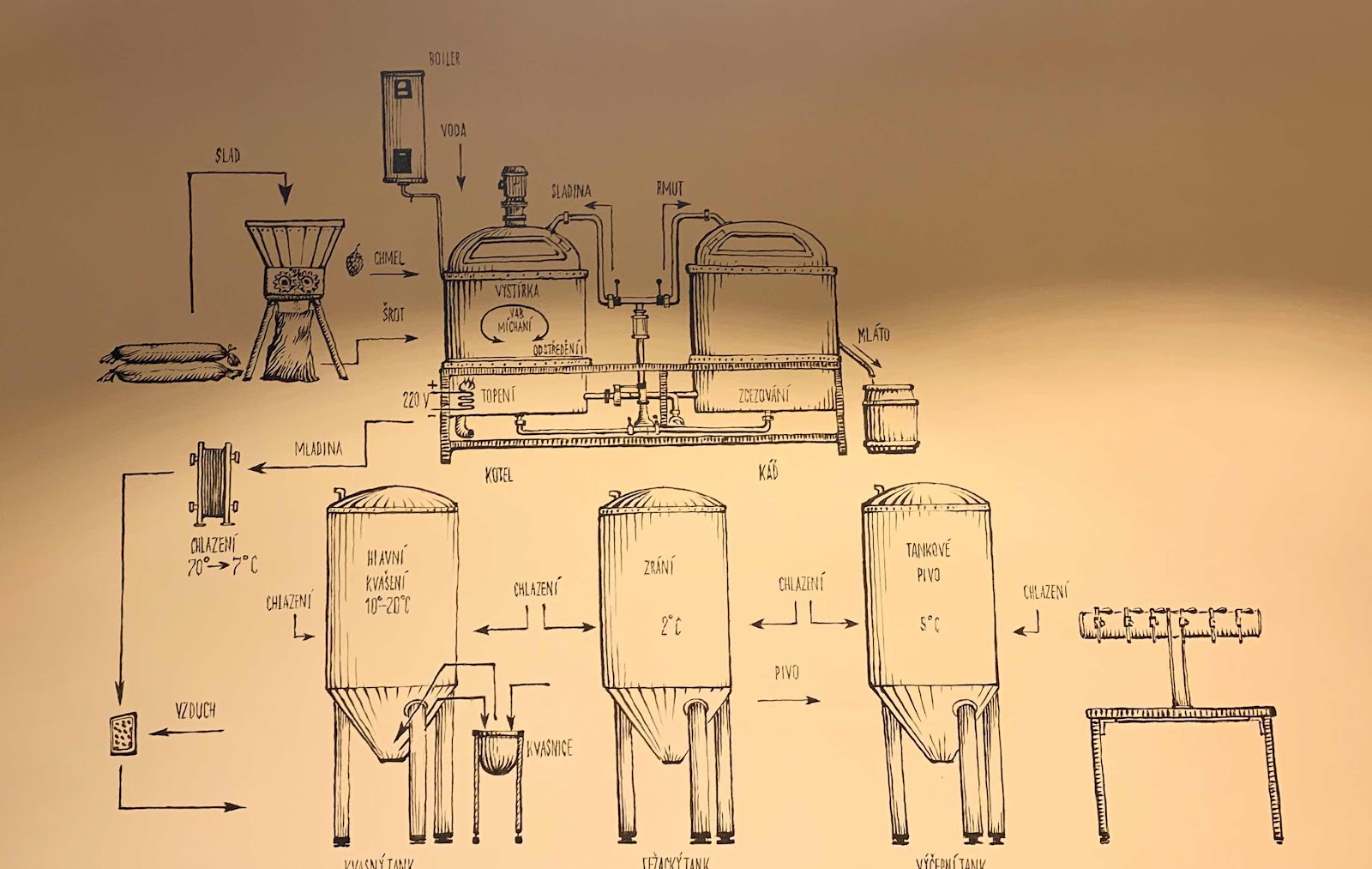 Also bags of malt by the door as you come in. I thought about trying the Amber but decided to move on. I should note when they first opened there were reports the 11º was brewed elsewhere. I asked if it was brewed here and was told yes but they pretty much always say that so take it with a grain of salt.
Around the corner was a pub I’d seen mention of on the internet, Pivnice Jamajka 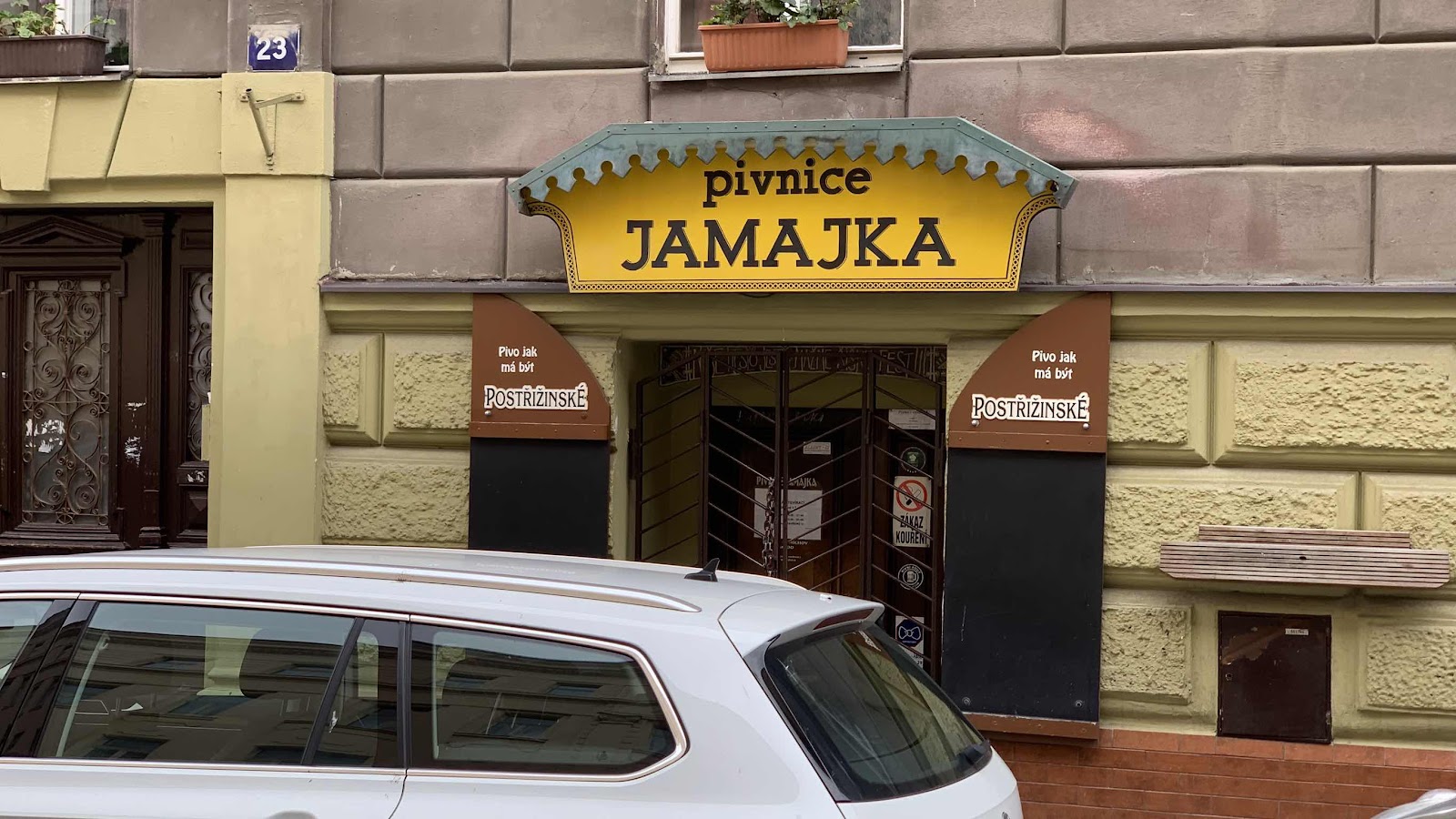 They had Postřižinské beers from Pivovar Nymburk, which I had never tried. They also had the Kácov Humbertus 10º, Uněticé 12º and the rotating tap was Matuška Raptor IPA. 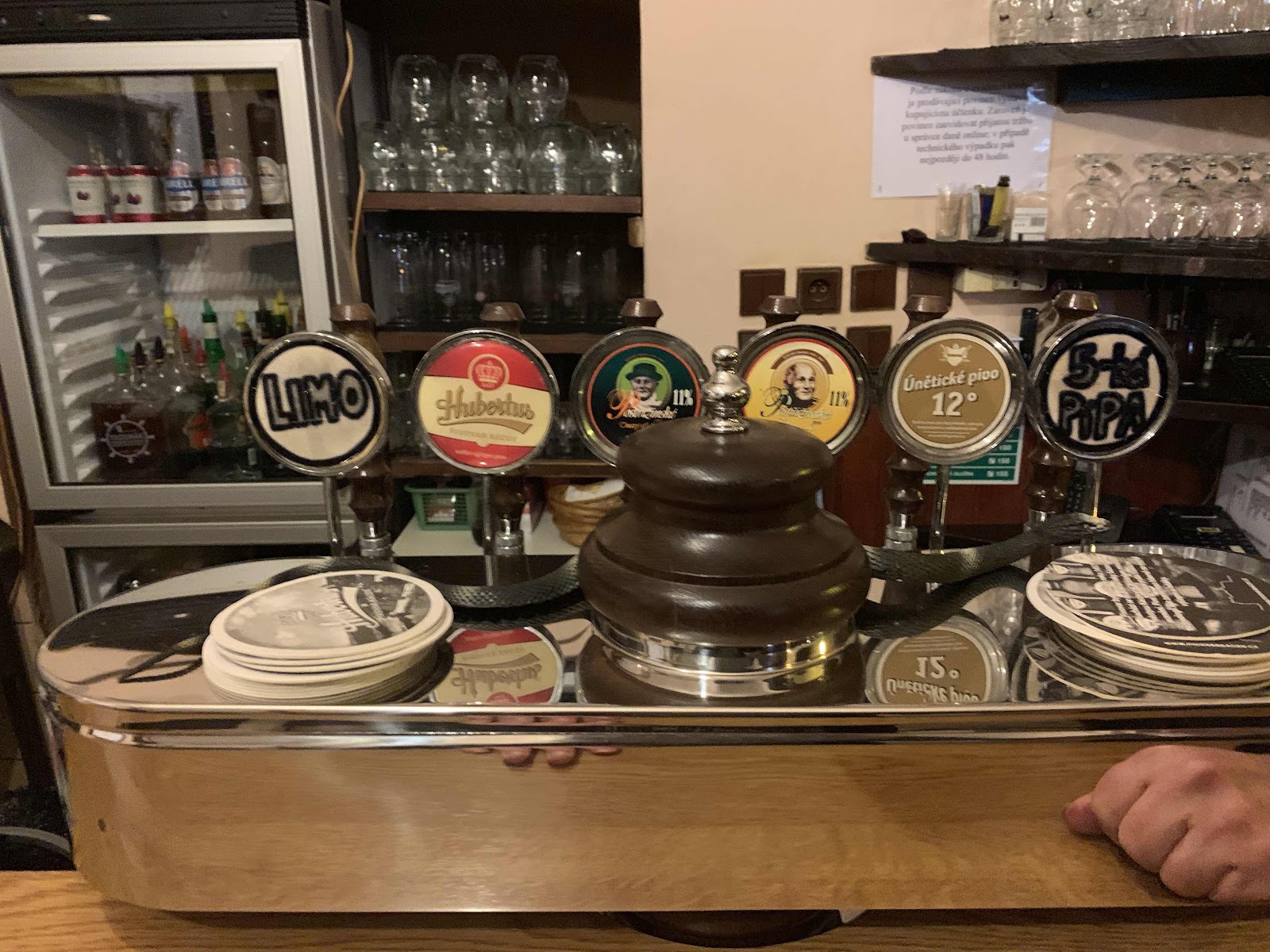 I ordered the tmavé and my drinking companion the světlé 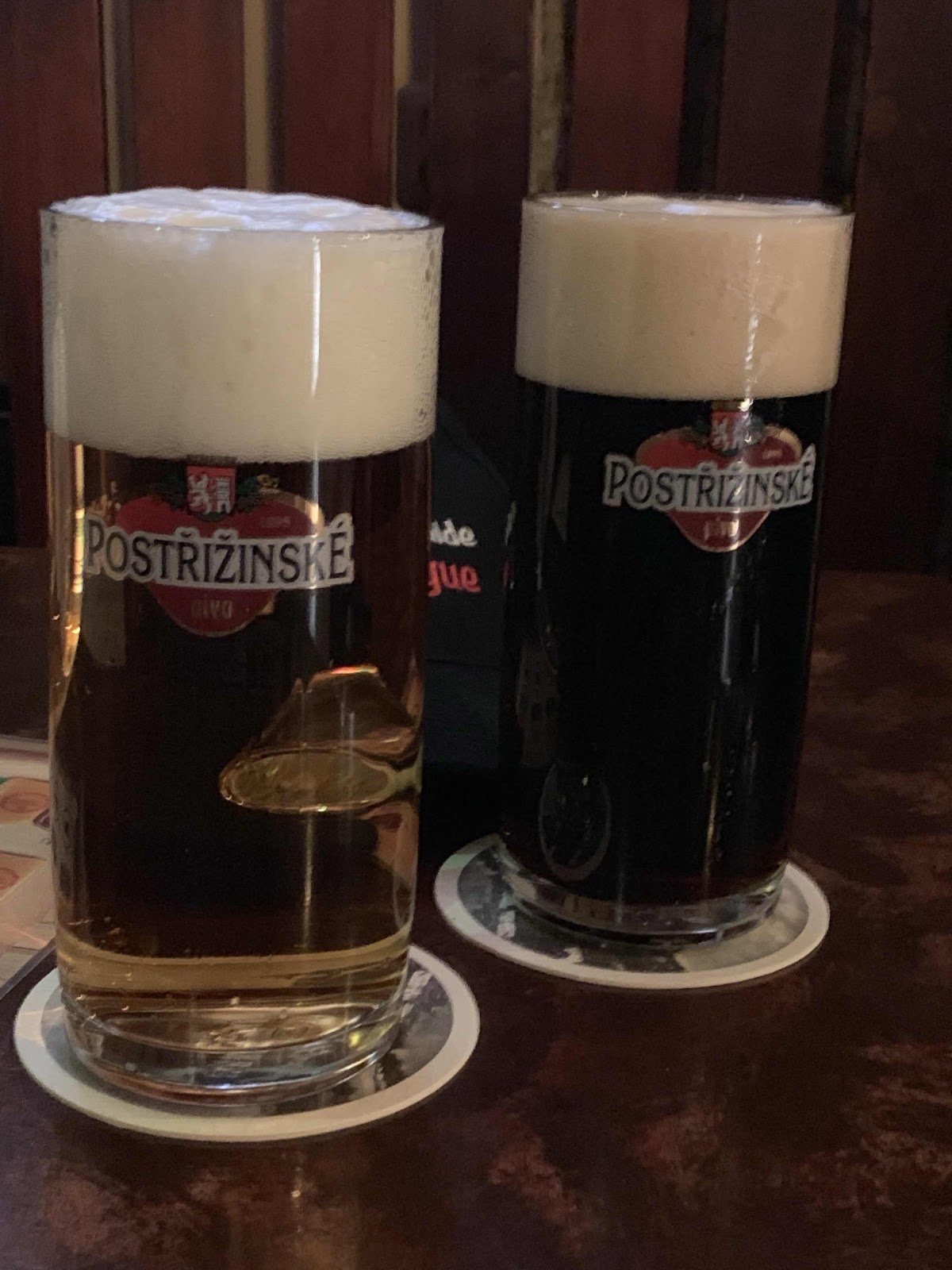 I found the beers a bit too buttery for my taste but he didn’t mind them. The světlé was the better of the two, I found the tmavé lacking any dark malt character.  I wouldn’t be surprised if they used a color beer to get the dark color.
On the way out I noticed a small fridge, with lots of De Molen and Lindeman’s Apple? Not a combination I’d expect. But I definitely could find stuff to drink in this pub. 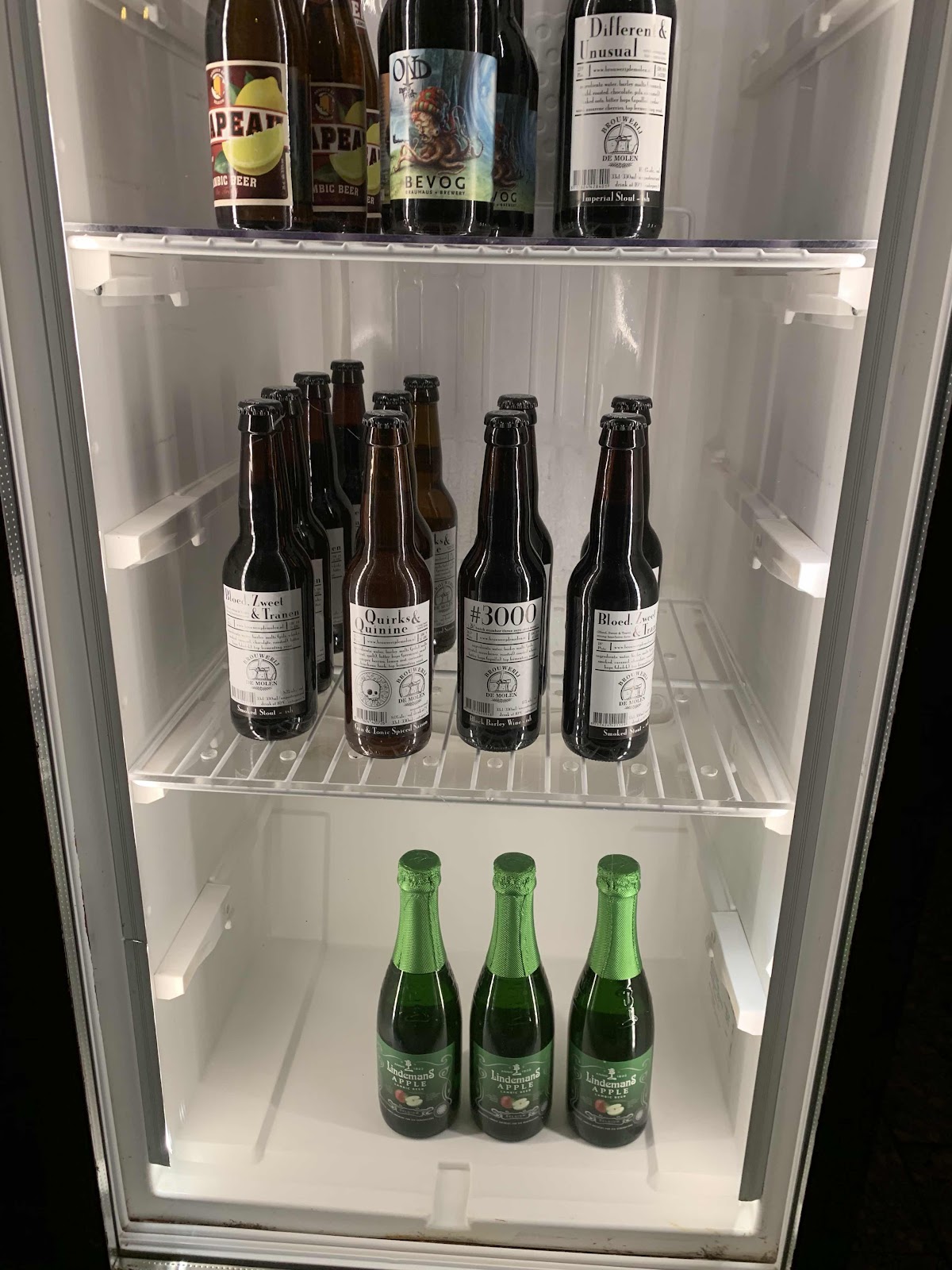 We hopped on a tram headed north and soon were at Craft Beer Spot, and brand new pub. 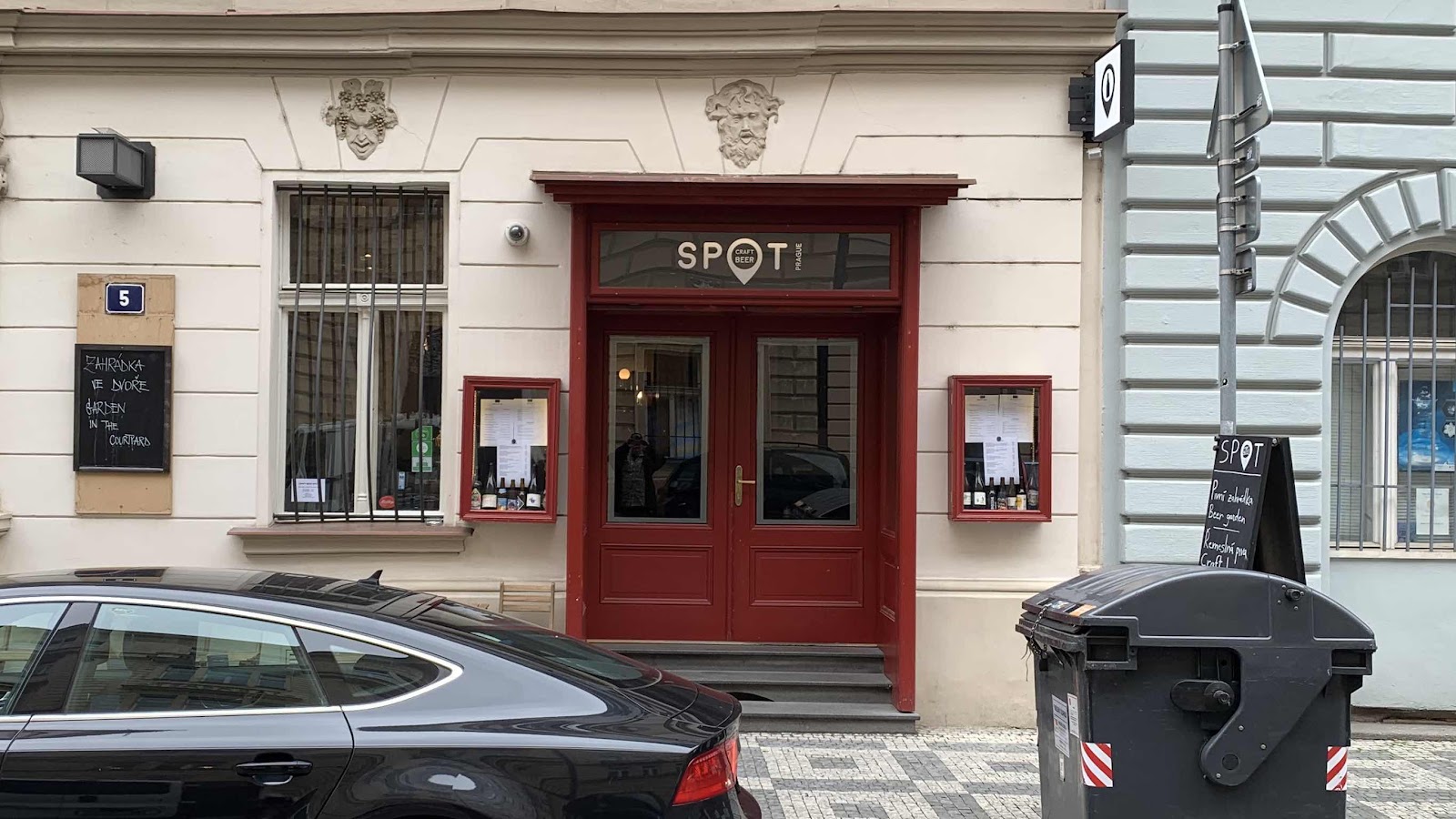 They have 10 beers on tap and a huge bottle selection. When I commented on that the bartender said they were connect with U Kunštátů which is renown in Prague for its bottle list. 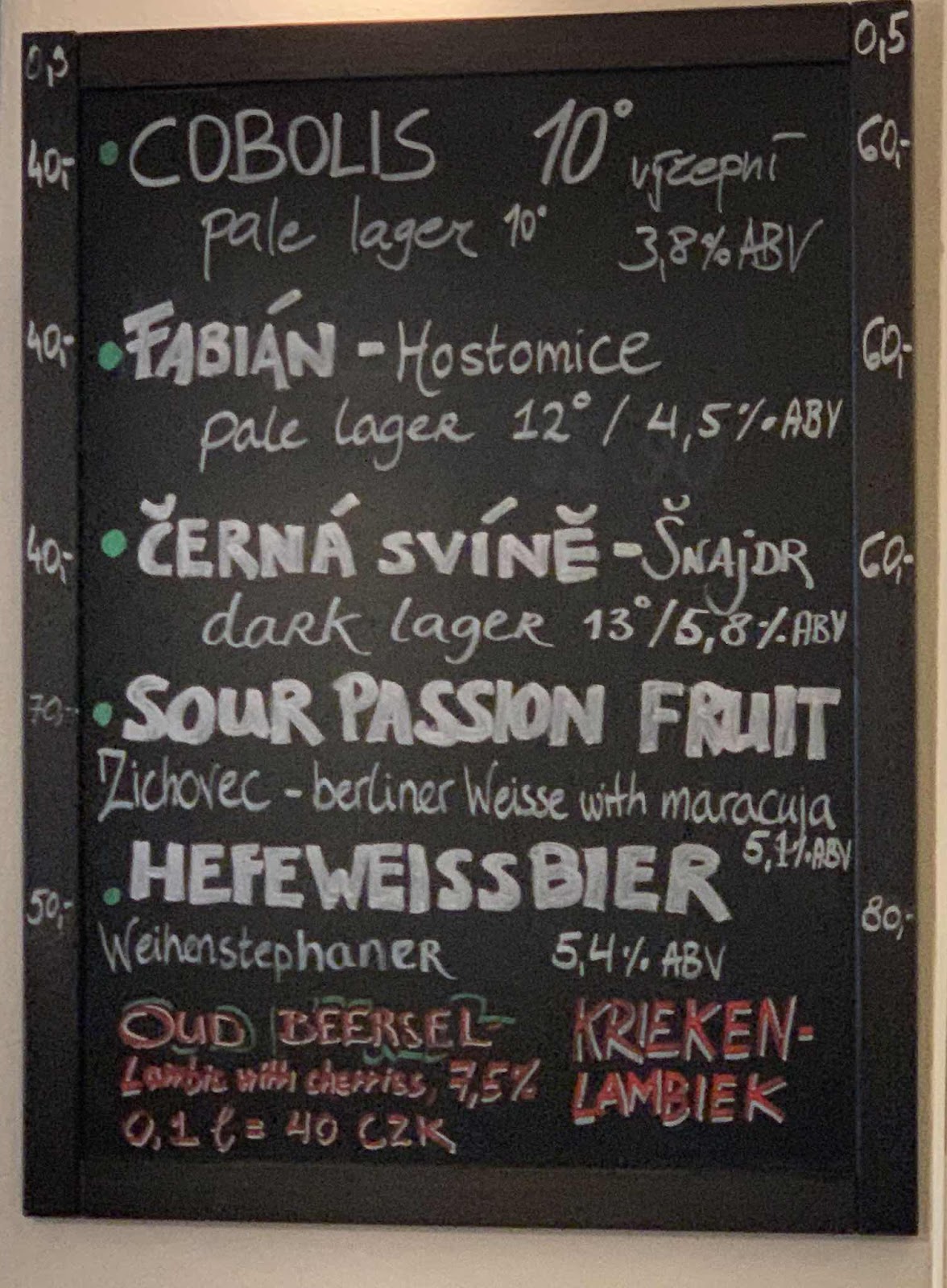 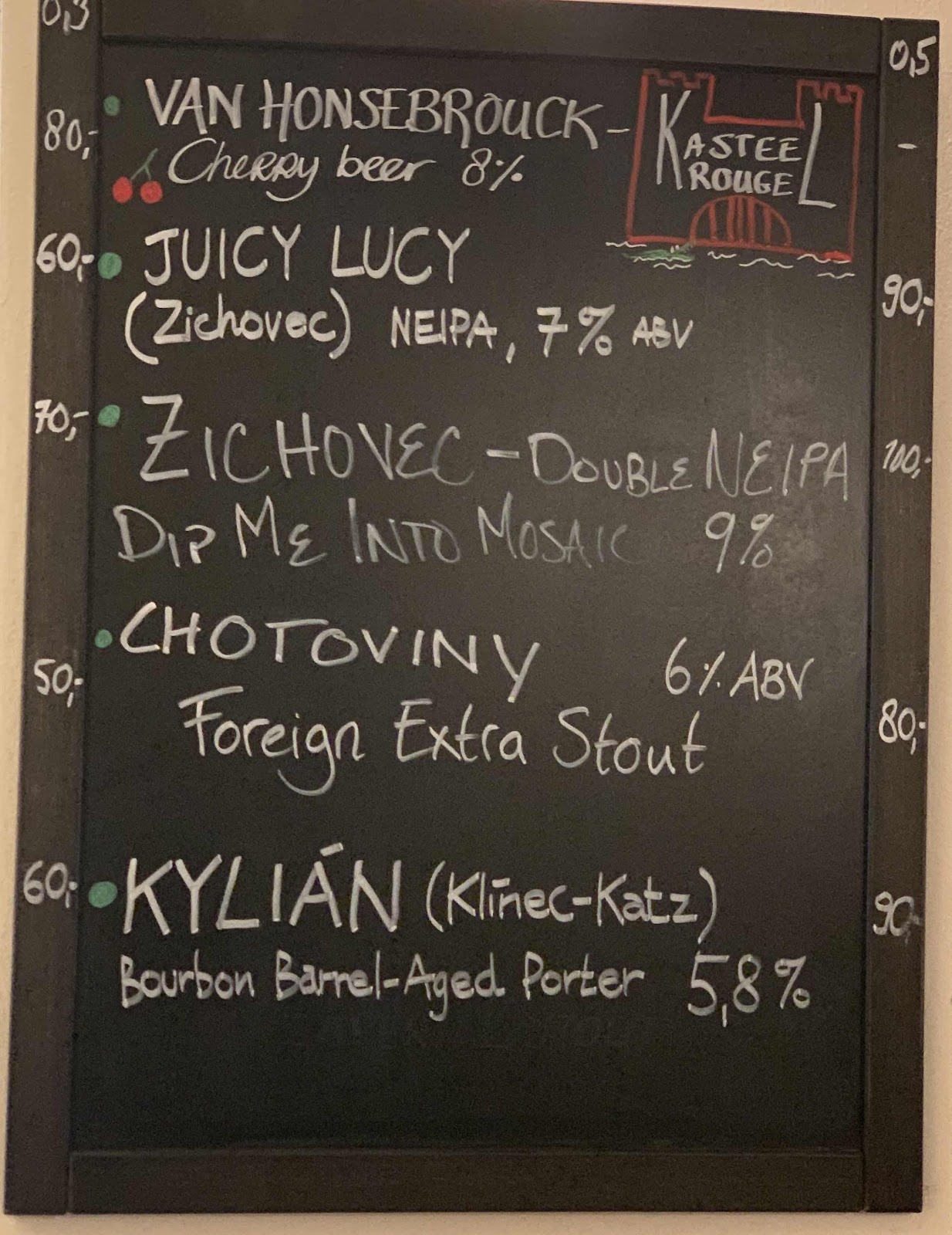 I went with the Hostomice 12º an old favorite. 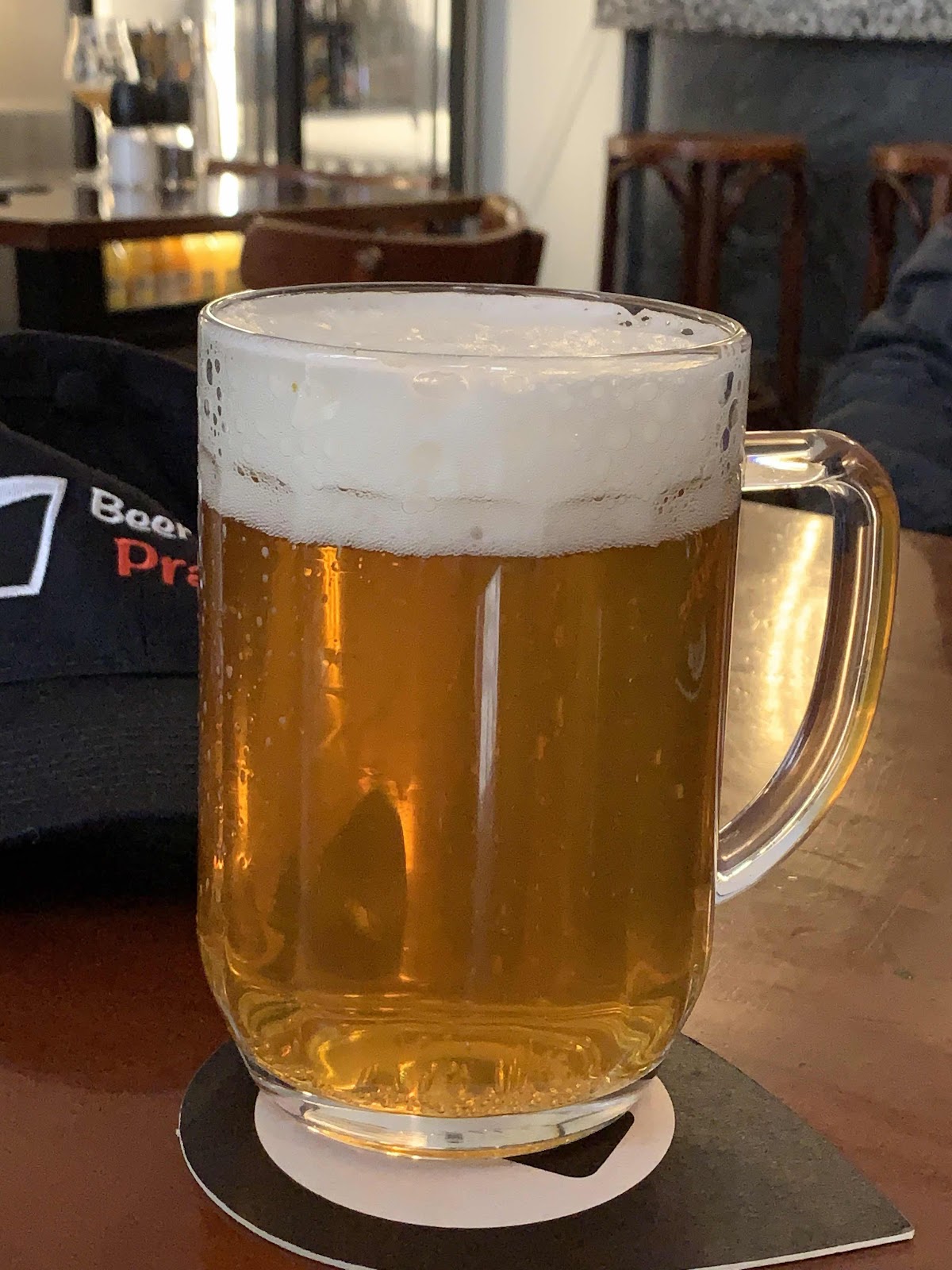 It didn’t taste as fresh and bright as I remember from the brewery tap in town, but I haven’t been there yet this trip so not really a fair comparison. But it was perfectly drinkable.
There were 5 or 6 fridges with beer, I took a picture of part of one because it had some old friends... 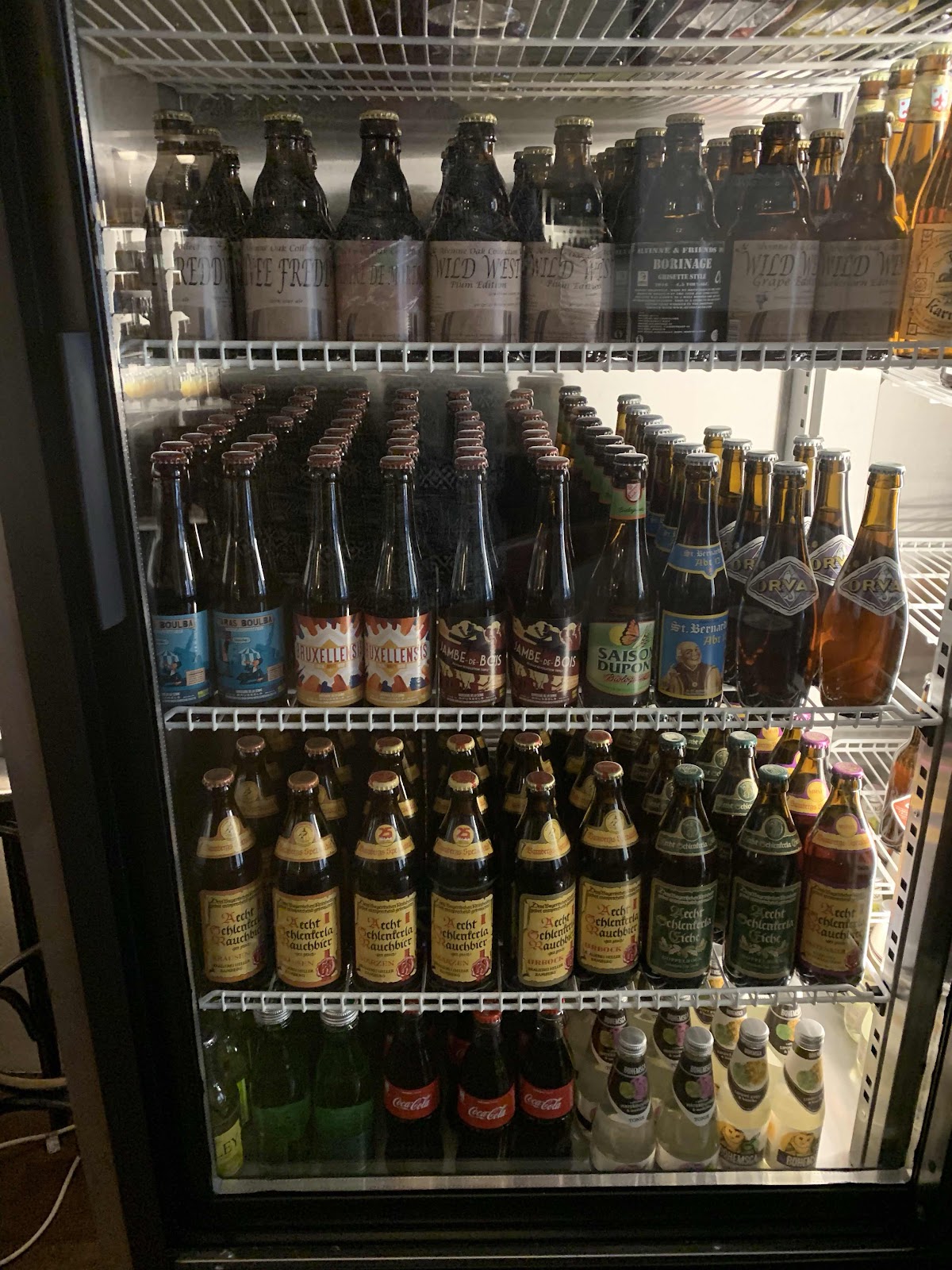 Then it was back on a tram back across the river to Indigo Ale Bar. It is a crappy picture because some guy parked a huge van right in front and it is such a narrow street I had few options. 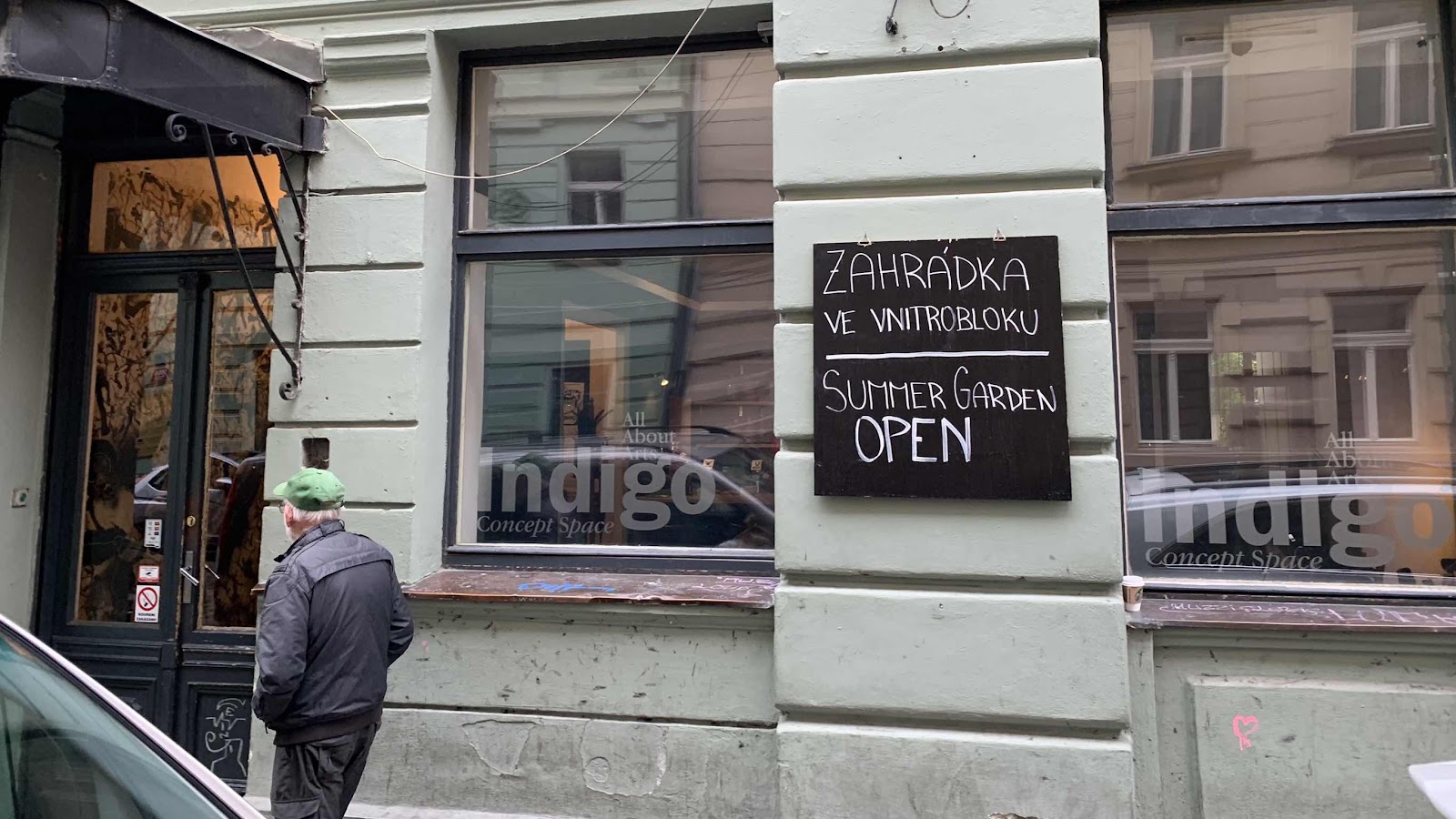 The day before they had a tap takeover by Zlatá Kráva from Nepomuk, near Pilsen. There tagline is Farmářský Pivovar Nepouk, with farm references in their beer names. 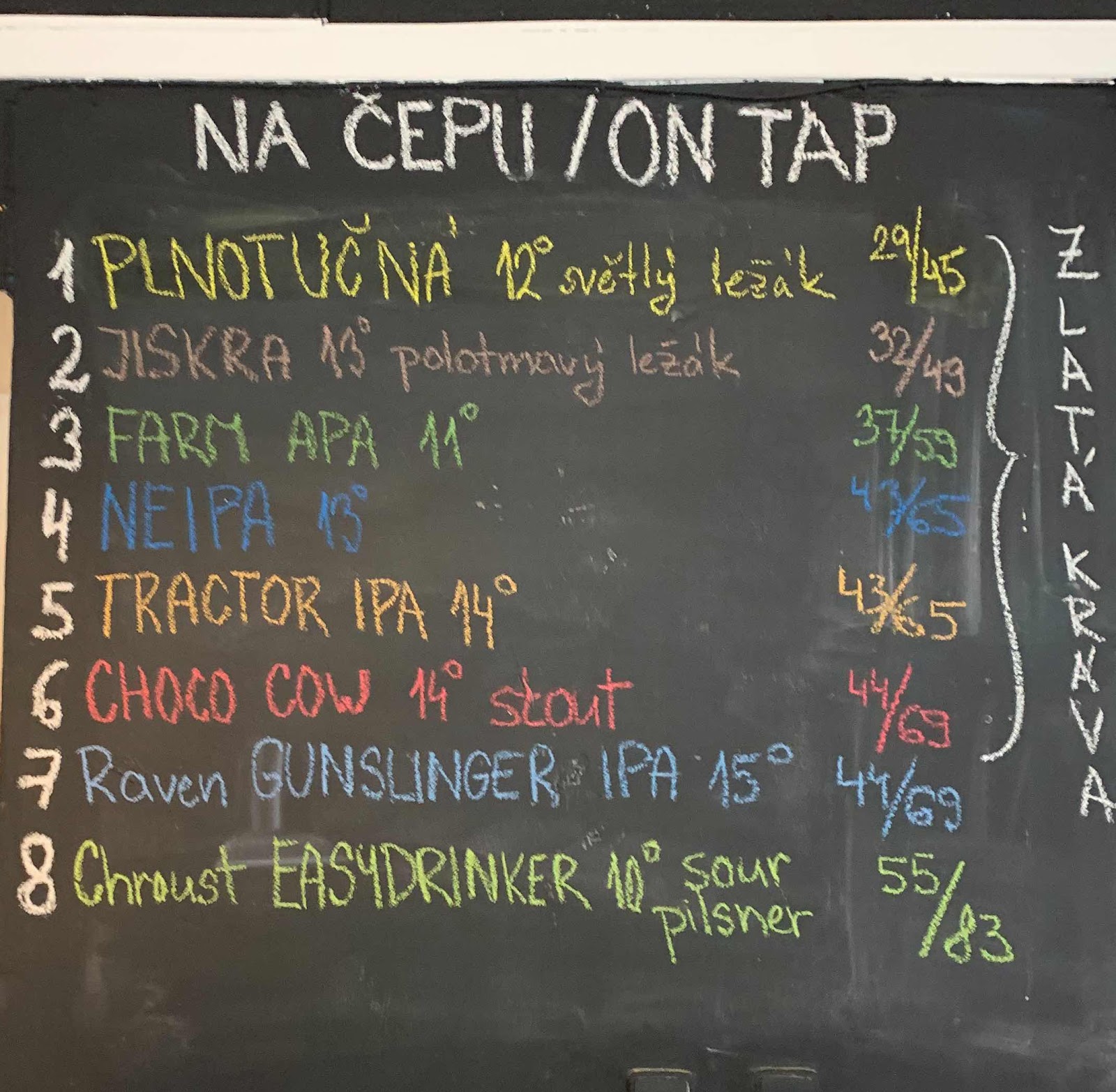 As usual I went with the světlé lažák and was not disappointed. I hope I have time to stop back in and try some other beers. 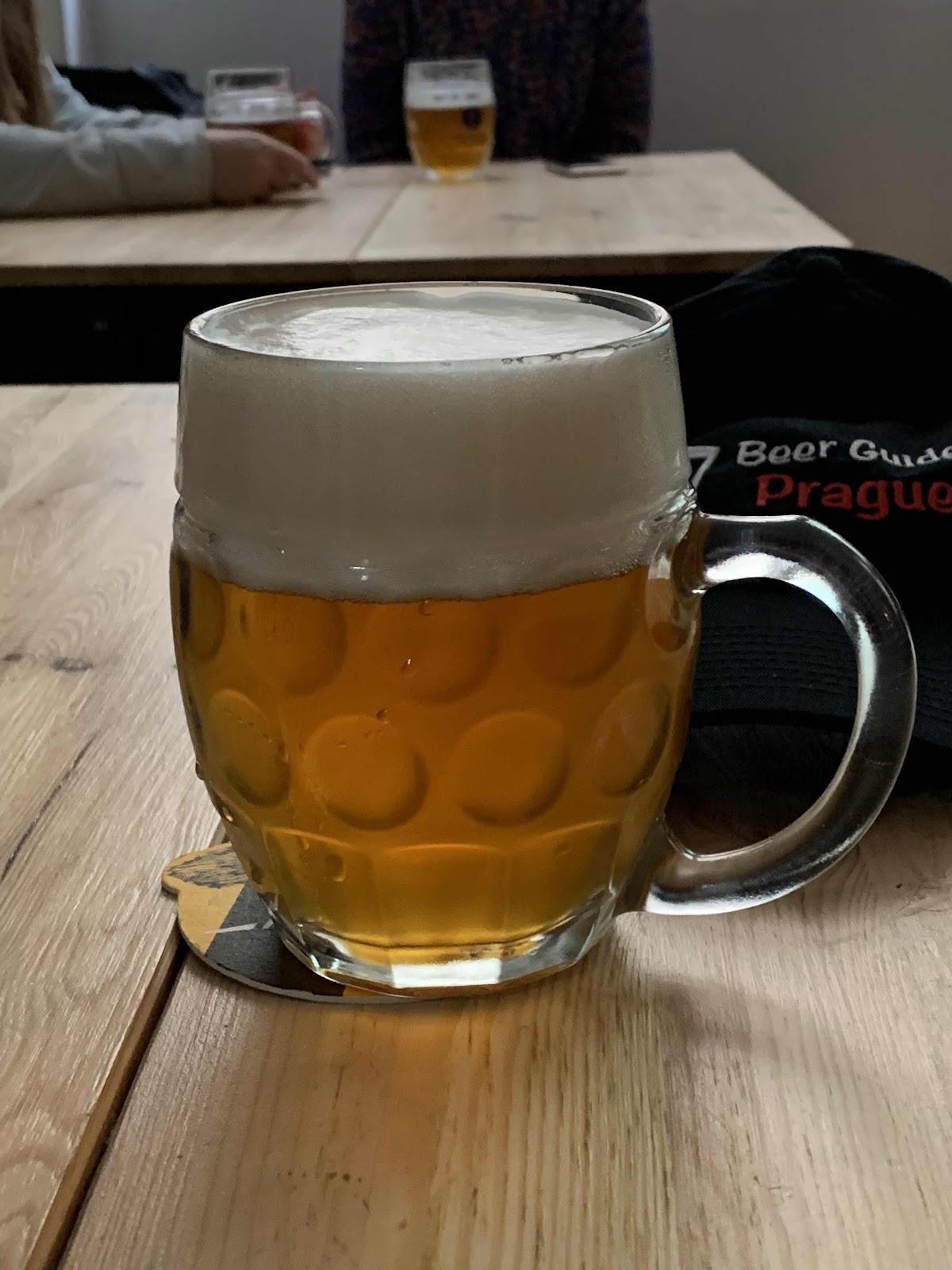 It was getting past time to eat, so I headed back towards my hotel, which is conveniently near Kulový Blesk, a restaurant with good food and a great beer selection. They have two sections, upstairs and downstairs each with its own set of taps. I was sitting upstairs. 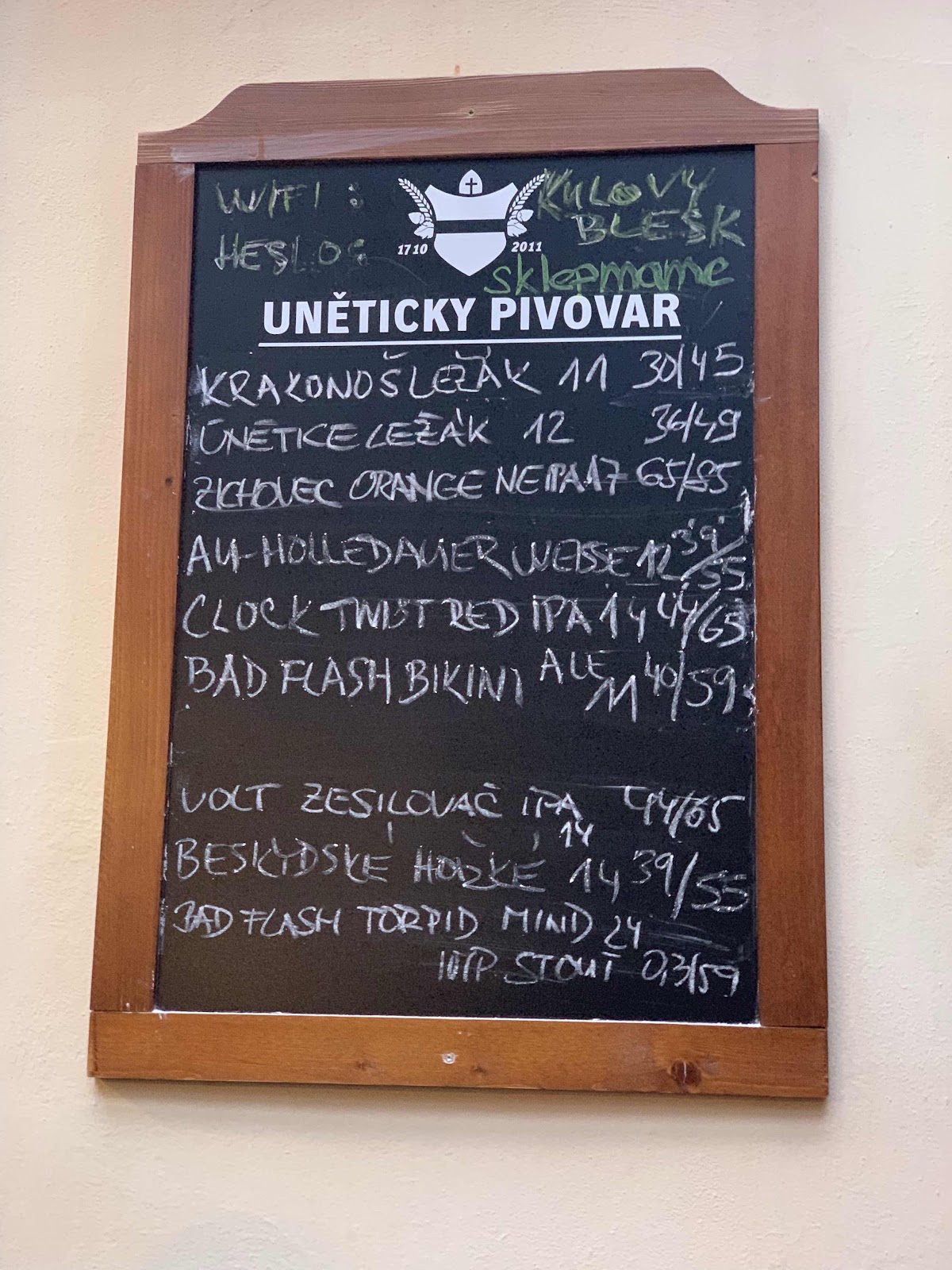 That is the third or fourth time I’d seen Uněticé on a menu so I figured it was time for one. 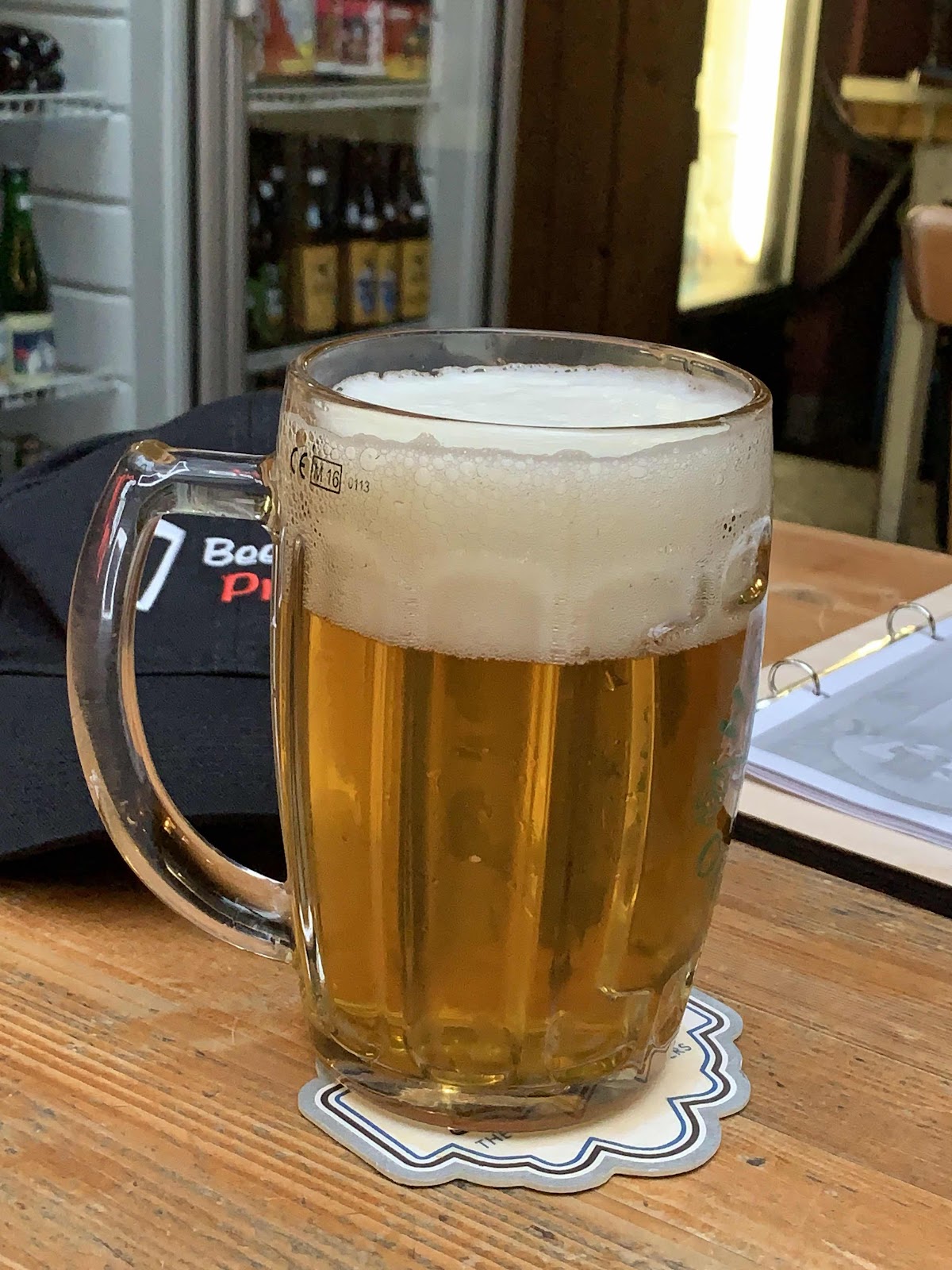 As delightful as I had remembered. The waitress automatically gave me the English menu. When in Germany I insist on the German menu because I don’t always recognize the dish when translated. But no such luck in Czech. I was late enough that the two of the daily specials, goulash and beer braised pork ribs were gone. I’d had both before and they are great. The menu had “Port Tenderloin” so I ordered that. In Germany that often is the translation of a schnitzel — and if fact growing up in the Midwest a fast food stable was a Pork Tenderloin sandwich, basically a schnitzel on a bun. But I was miskaken 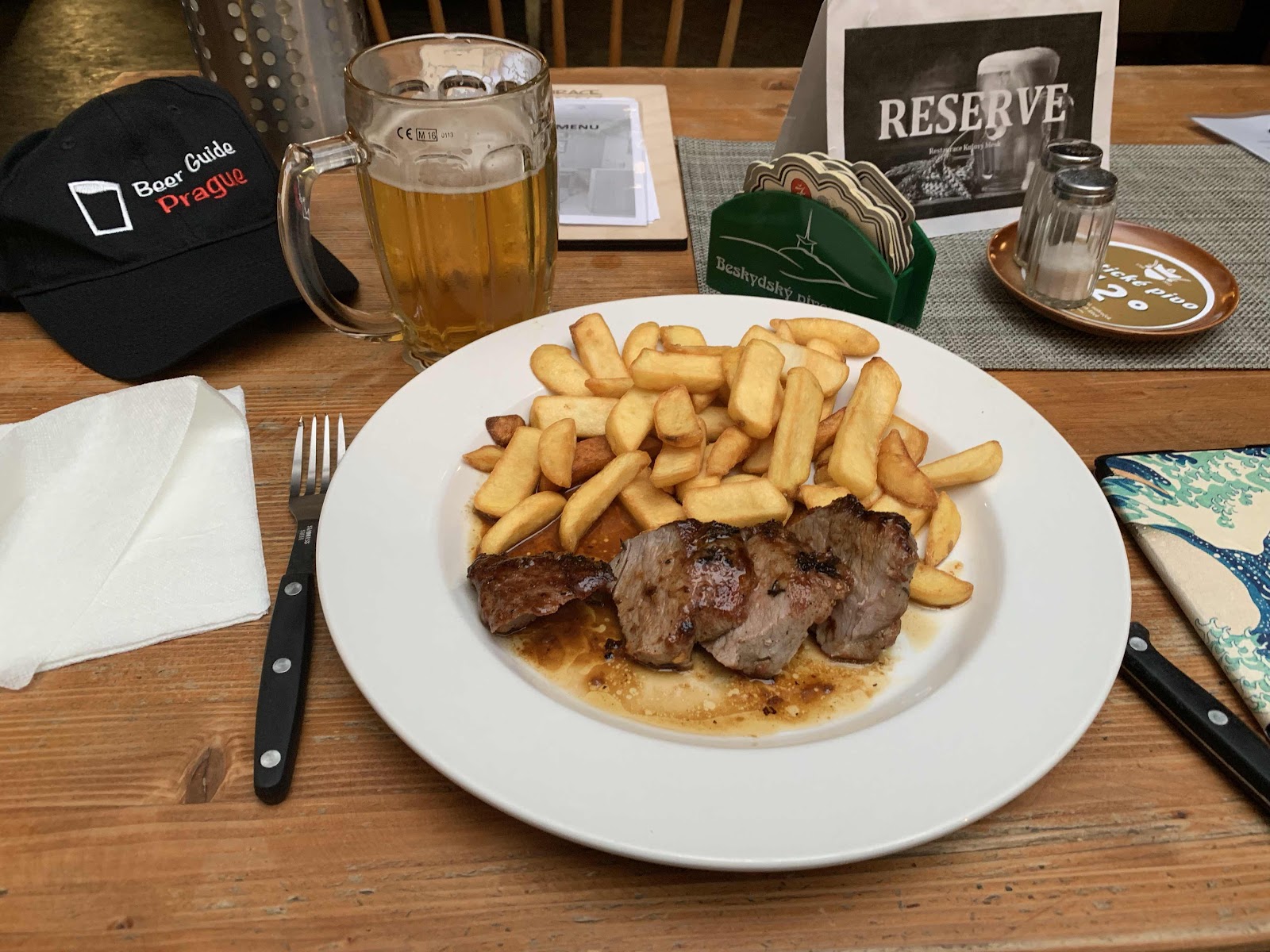 Then it was back to the room to rest up for another day of beer drinking in Prague. I visited 5 new places which is good progress.
Posted by The Mad Brewer at 1:47 AM