Of course, when you are early, the train is late but it was only a few minutes. The ICE on the track before my train was running over 45 minutes late.
The second time the snack cart went by, a green bottle in the back winked at me and soon I had company. 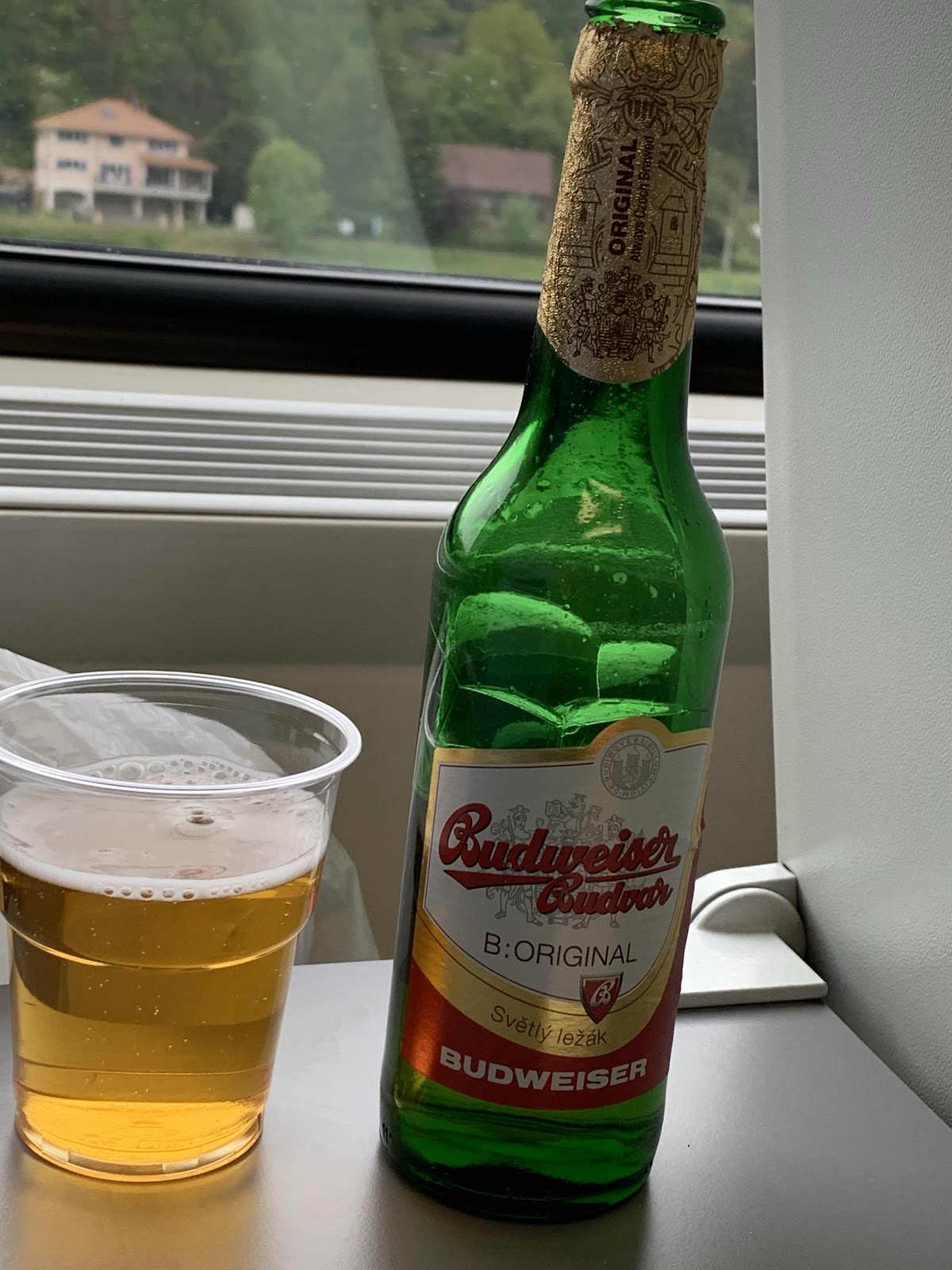 Sorry about the awkward angle, I was trying to get some scenery in the background.  I’m always nervous around green bottles but this one wasn’t noticeably skunked, bit it was not fresh, just a bit of oxidation peeking thru. Of course, back in the day some called that  “continental flavor” as did one friend explaining why he didn’t like the Heineken in the Netherlands — it lacked that continental flavor.
Crossing into Czechia was evidenced by two things — the tracks got rougher and the train WiFi went from a 500MB limit to unlimited bandwidth. It was a Czech train so maybe they had to pay roaming charges.
Mostly becoming an Old Fart™️ is pain, but it Prague it has its advantages. If you are 60 years or older, for 20 Kč (about US$1) and a color passport photo you can get a “Senior Card.” If you are between 60 and 64 that allows you to travel on public transport for half price. If you are 65-69 the senior card lets you travel for free. If you are 70 or older you don’t even need a card, just your passport. So I was soon had my card and was going to buy some day passes at Kč 55 each — that is like a free trendy craft beer a day. The nice lady at the window said “no no, you want a monthly pass.” I said I was only here a week and she help up her calculator (being at the extent her English and we’d long passed my knowledge of Czech since it didn’t involve ordering a beer or finding a restroom) and punched in  7x55=385 and said “monthly pass Kč 130.” Sold! Free travel for a month (well, actually 30 days) for US$5.50! I might have to stay over an extra week just to ride the trams. I can see explaining that when I get home. 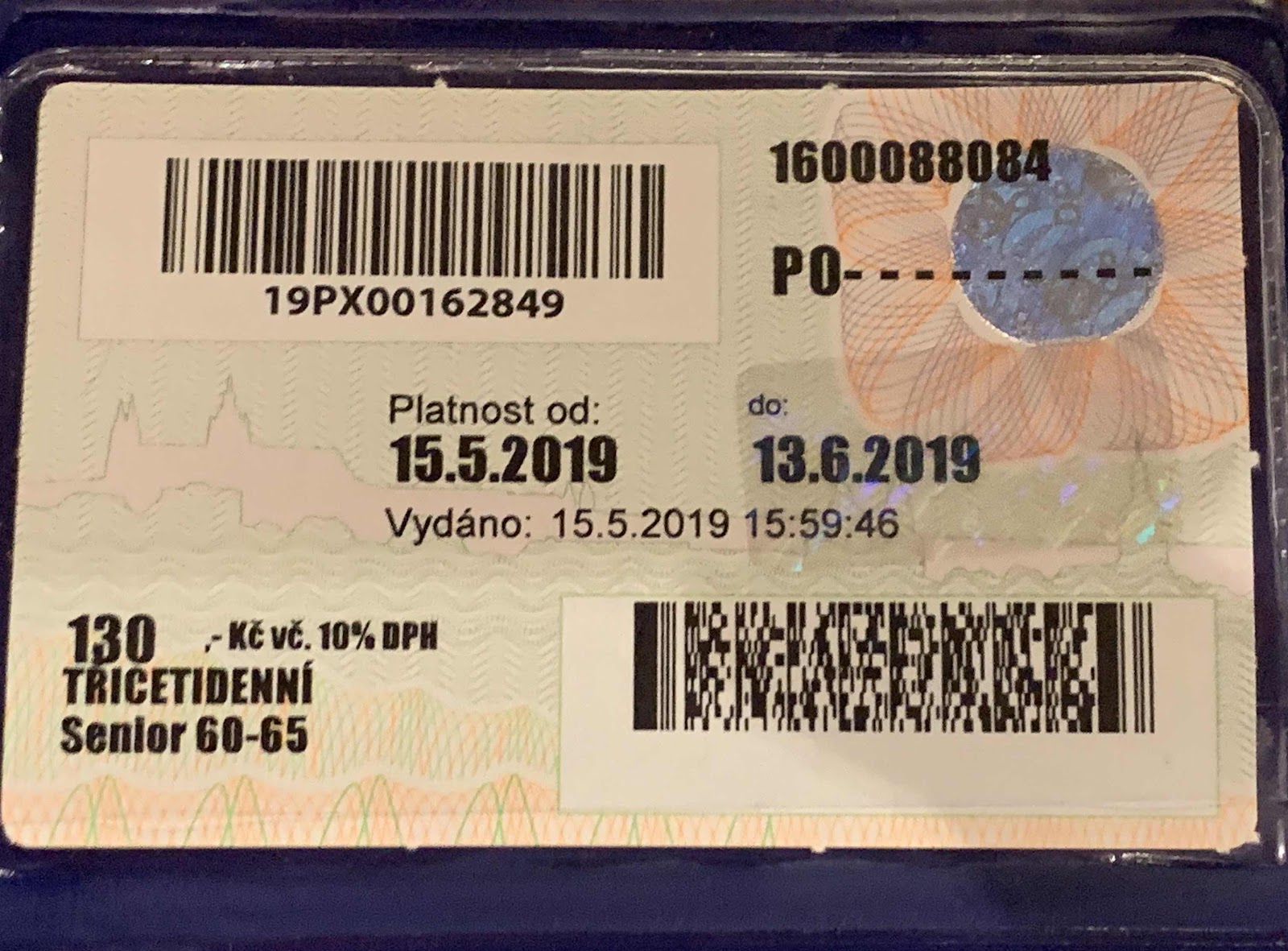 You can only get the card  some DPP ticket booths. There are two at the main train station and another in Terminal 1 at the airport (the booth at Terminal 2 doesn’t do them). I believe also at the Museum Metro station but I not not sure about that. The internet is your friend here.
Soon I was checked in at the hotel and unpacked as much as I needed to be and off for a beer. A beer friend who is originally from Southern California but has lived in Pilsen for a decade or so was in town meeting up with some American brewers and they were next headed to Dva Kohouti, a new brewpub in the Karlín district. The brewery is supervised by Adam Matuška (of Pivovar Matuška) so I had high hopes. Another friend, who now lives in Wales also happens to be in Prague we all agreed to me there.
It is a little hard to find, being in a courtyard behind the Lokál restaurant). 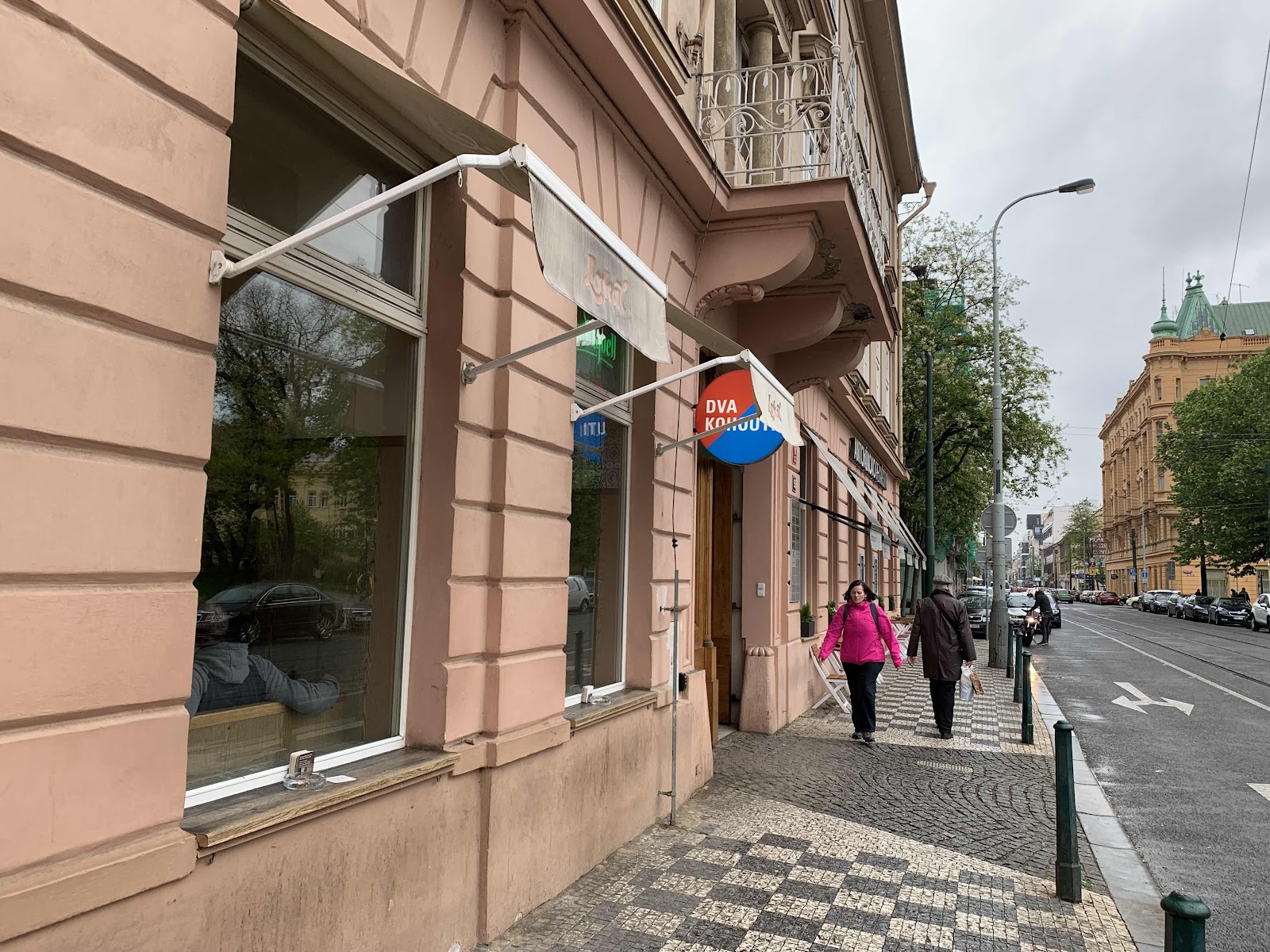 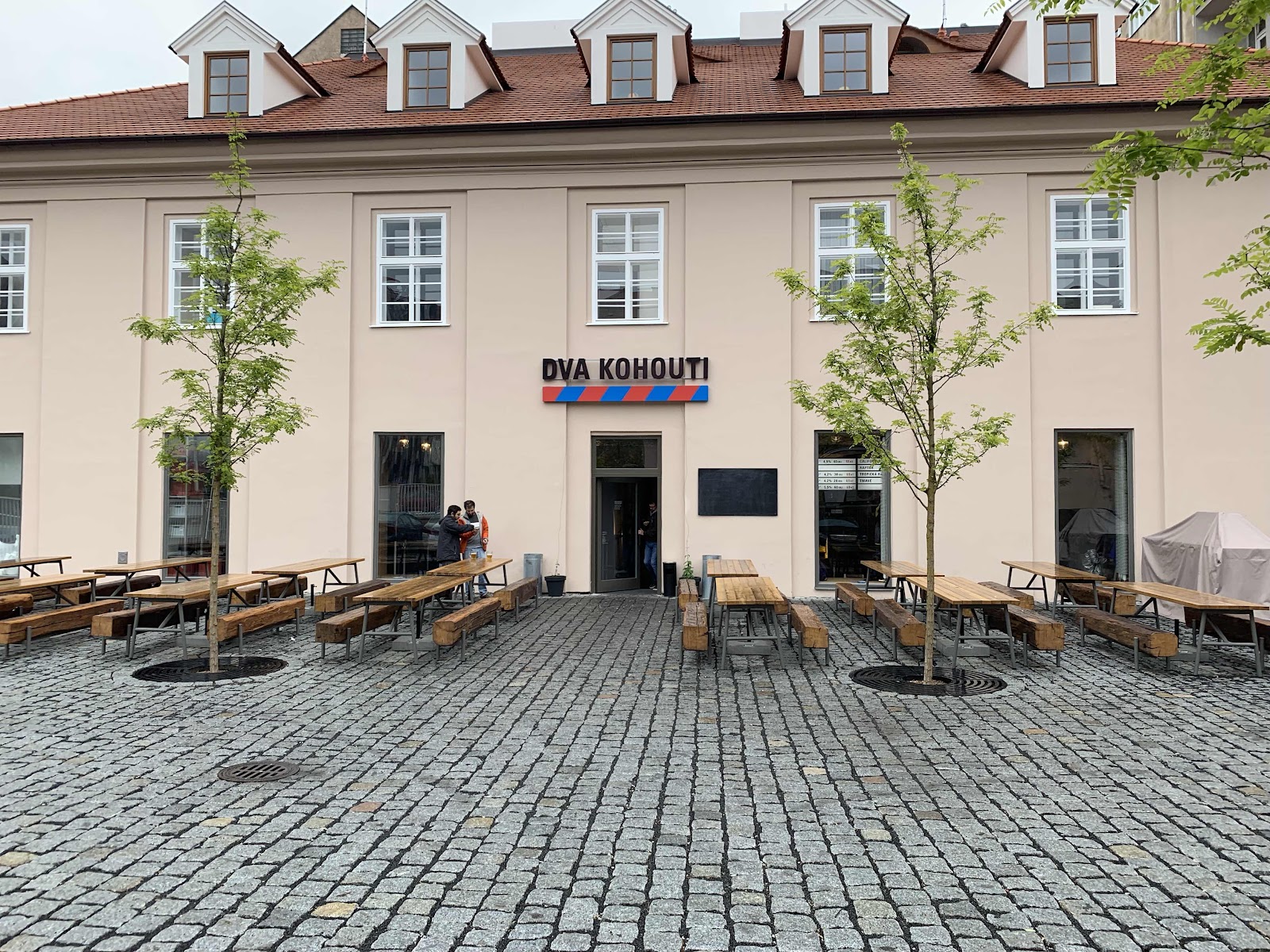 When you go in your pay for your beer and are given a receipt and then you pick it up further down the bar.  Only one beer was brewed on site, the others being regular Matuška beers.

I started the the on site beer, Mistní Pivo, fresh from the tank.. 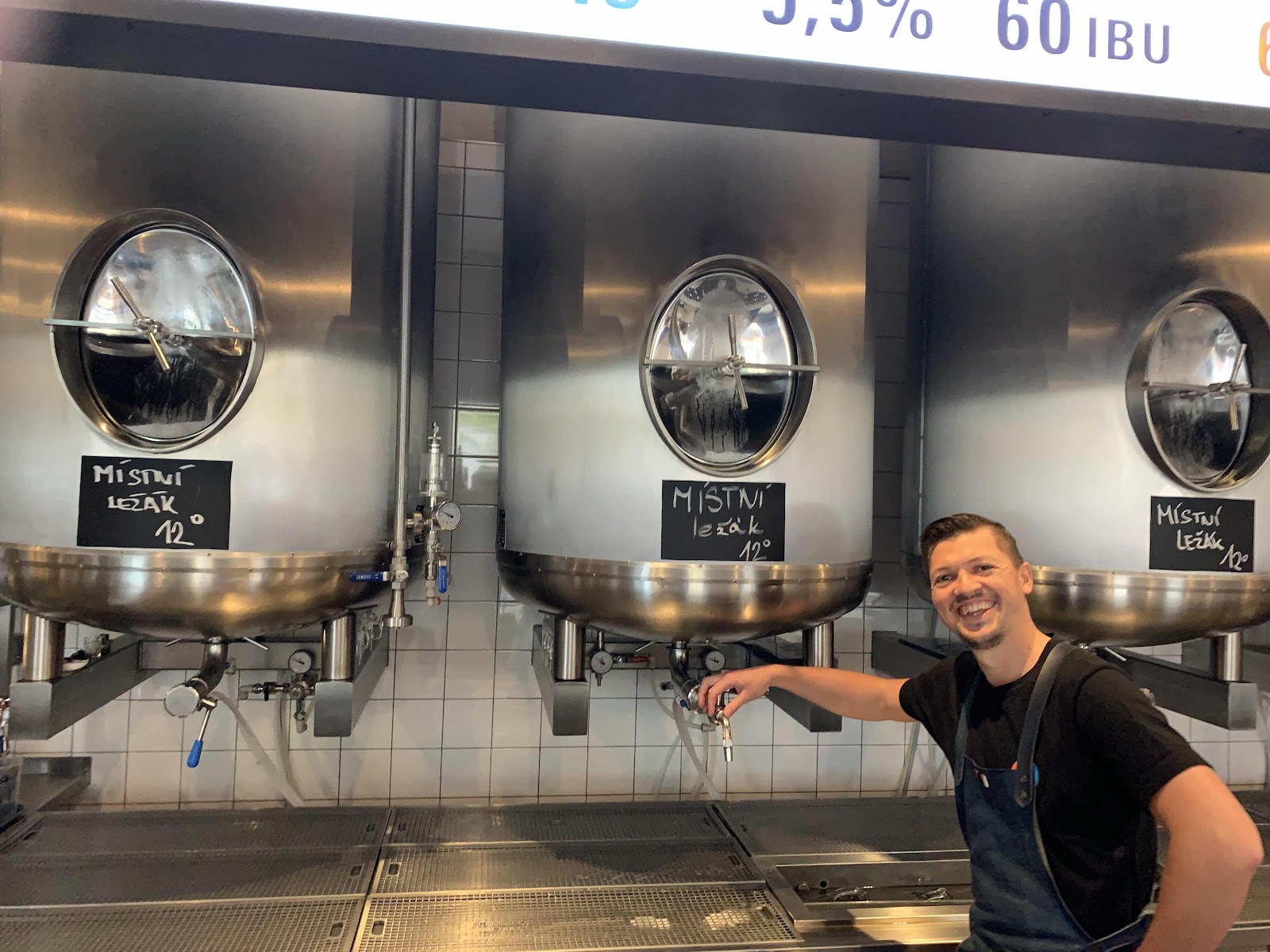 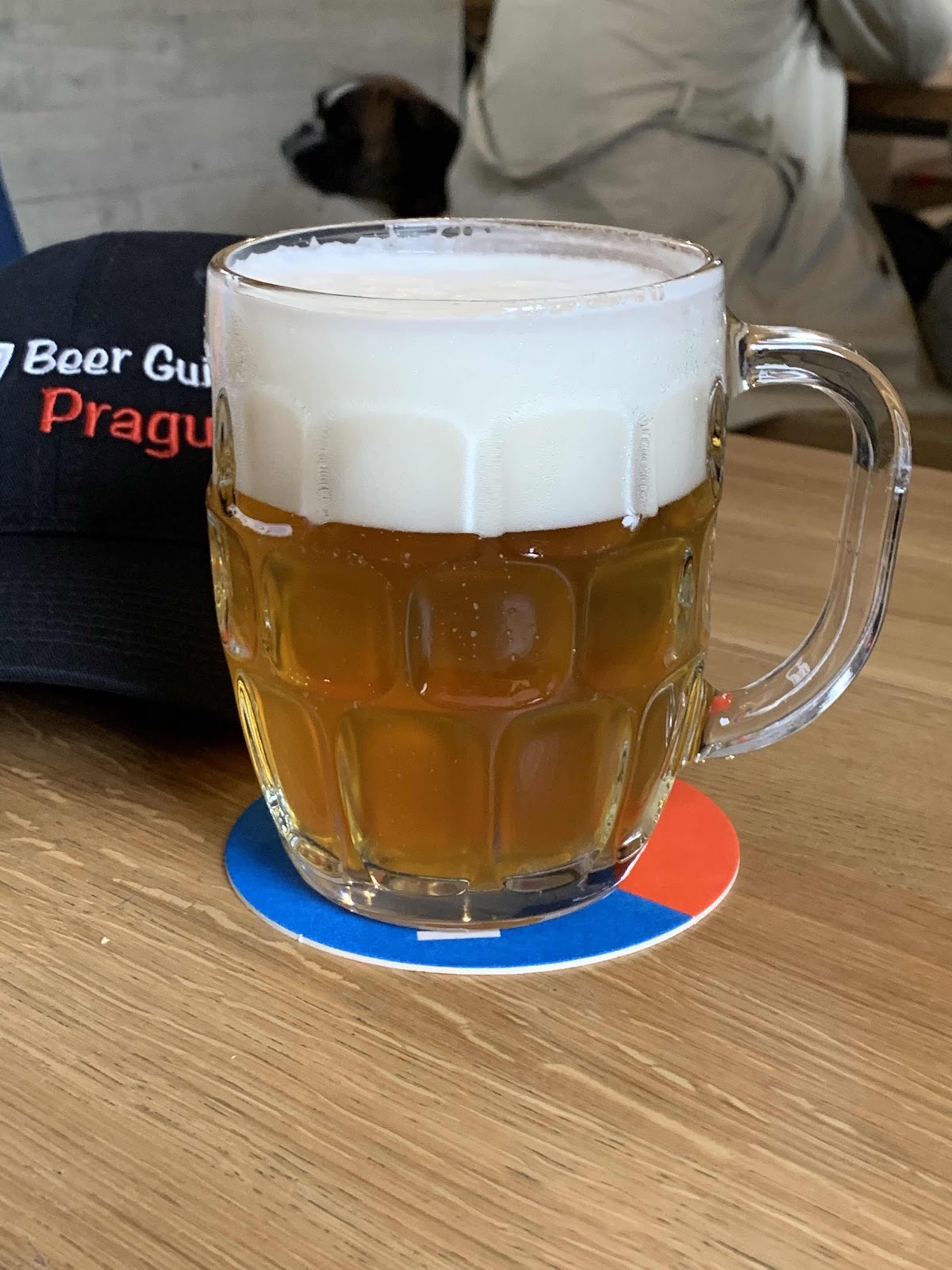 It is a little hard to tell in the picture but the mug is only .4L instead of the standard .5L. The beer was fine but I had gotten my hopes up and it didn’t reach my expectations. Especially at a premium price.
Next up I tried the Matuška Pílá Perla. Nobody knew what the style was. It turns out it pretty much wasn’t any style, it was brewed with various leftover lots of malt, including some Sauer Malz which explained the slight note of acidity. It was a cleaner beer than the in-house one. 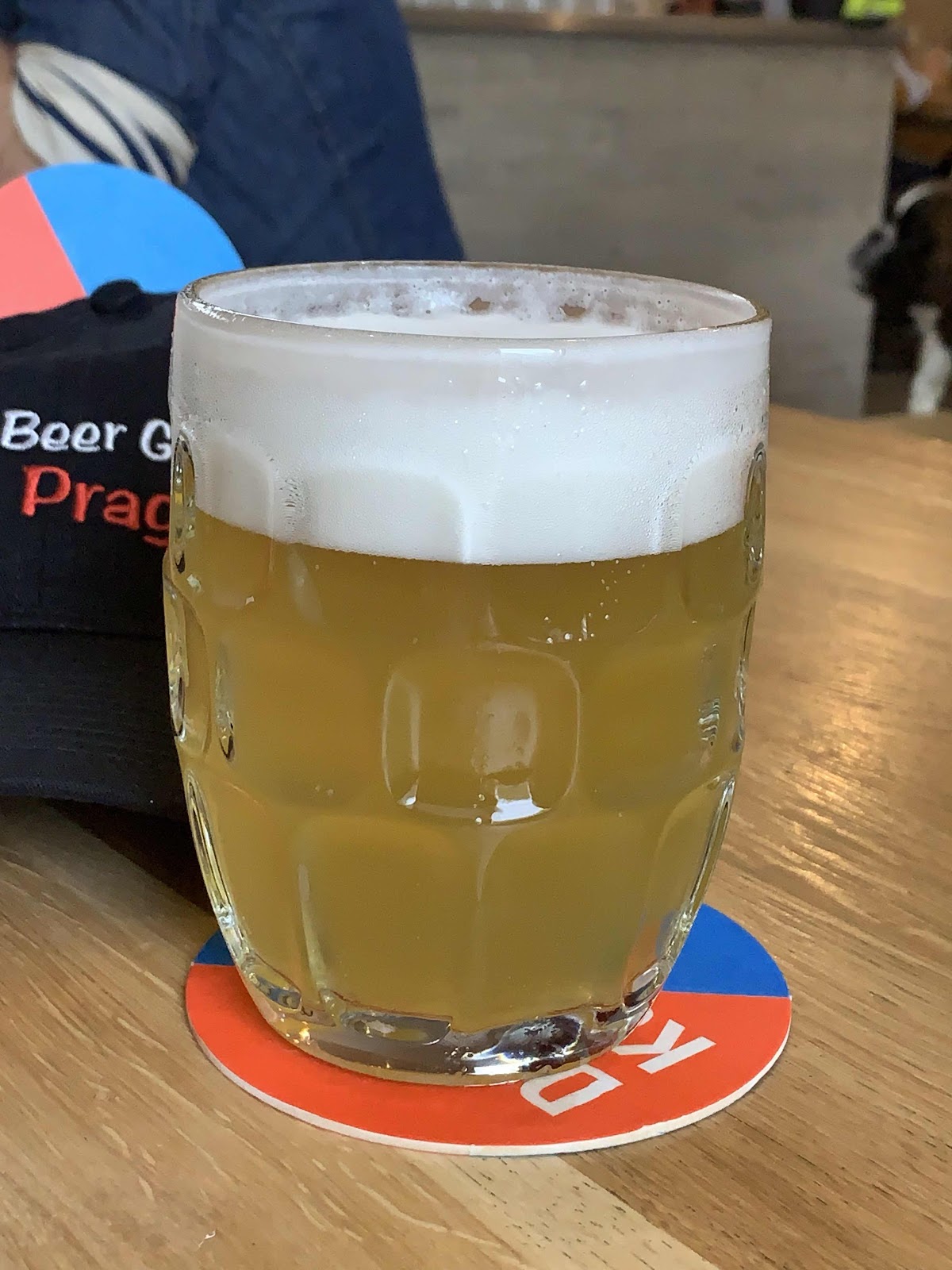 The friend from Pilsen had brought along some unfiltered Pilsner Urquell to share with the group (after receiving permission to do so). 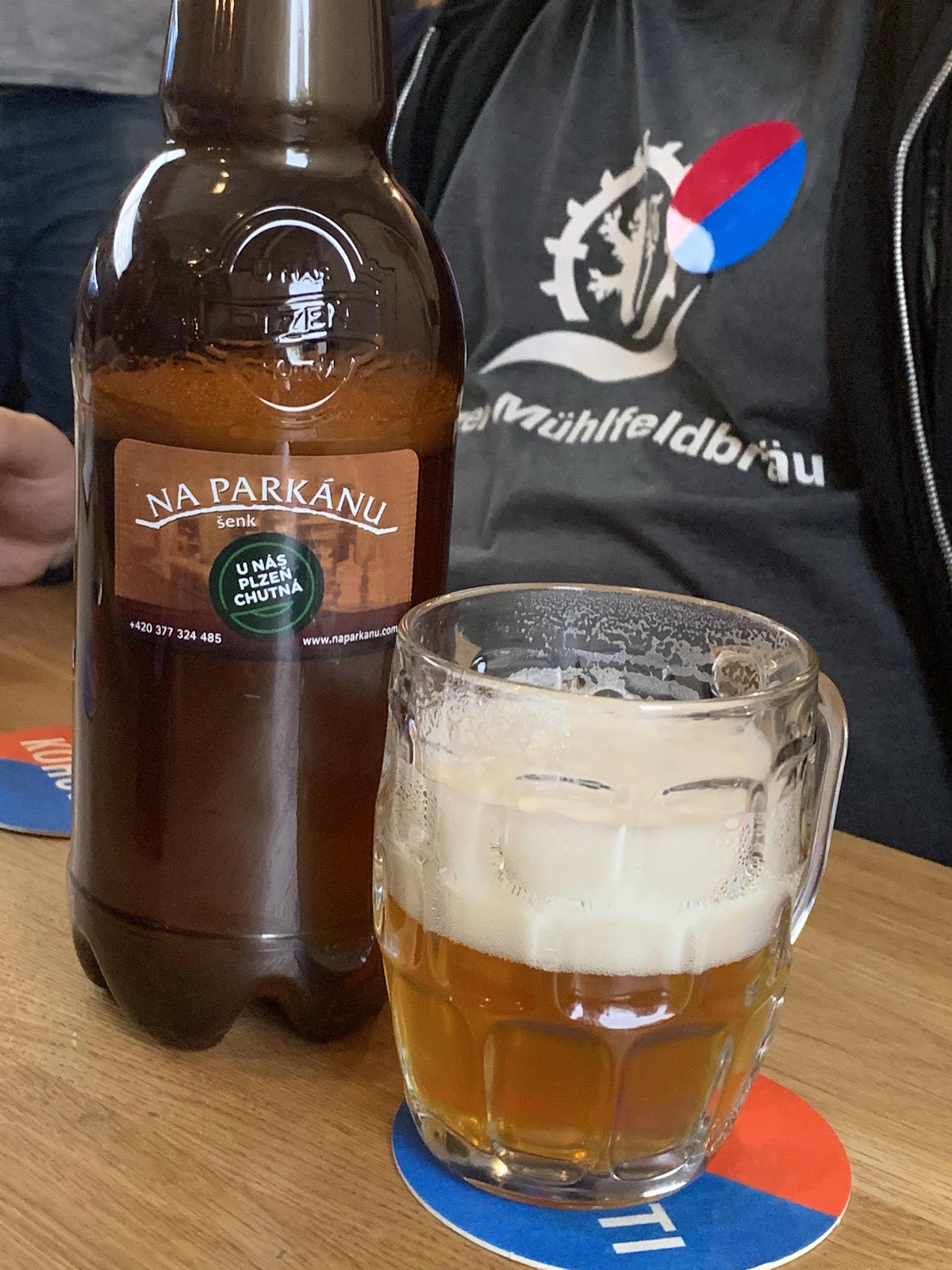 It actually wasn’t all that good, way to buttery. And it was only about 24 hours in the PET bottle at that time. No thanks!
Needing to rinse the butter flavor, I ordered the Matuška Tmavé 14º. It was very good, with a strong black malt flavor that almost made it taste like a bottom fermented stout. 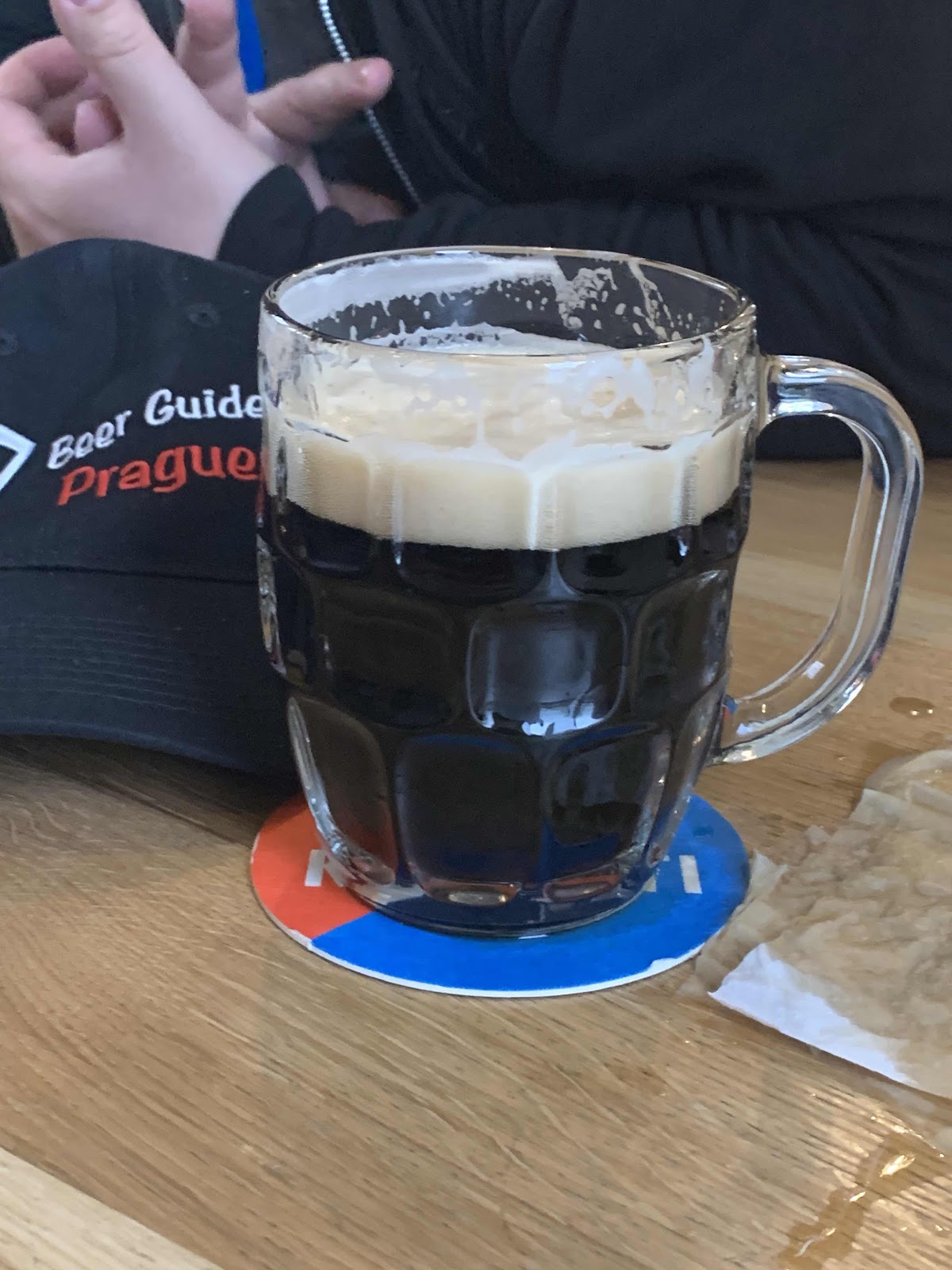 That is not a bad pour, if you look closely you’ll see beer on the table — I spilled some but saved most of it.
After that, I was ready to move along. A few blocks away was another new place, Vrátnice, which has mostly Albrecht beers but also some guests. 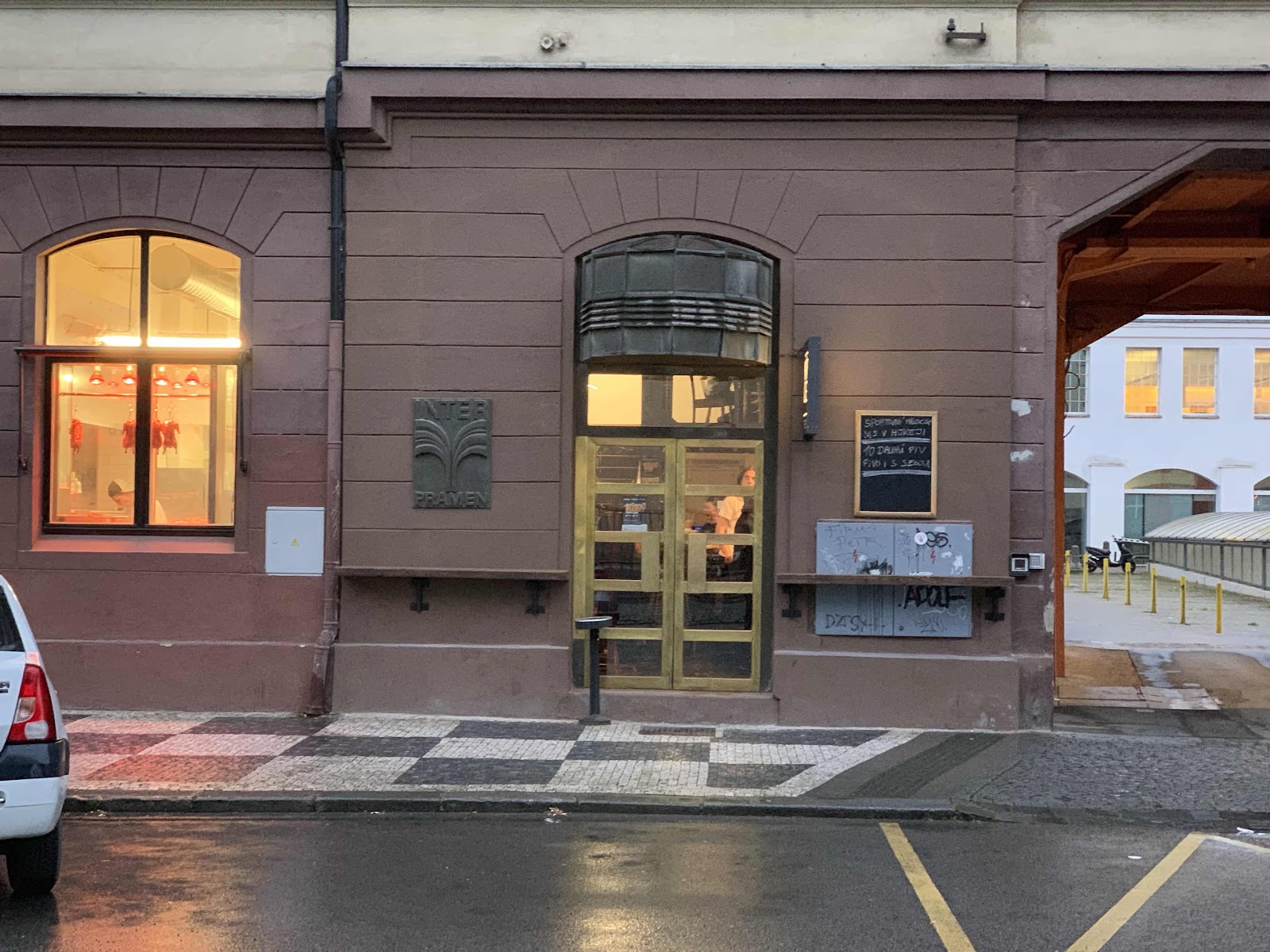 They have 10 beers on tap 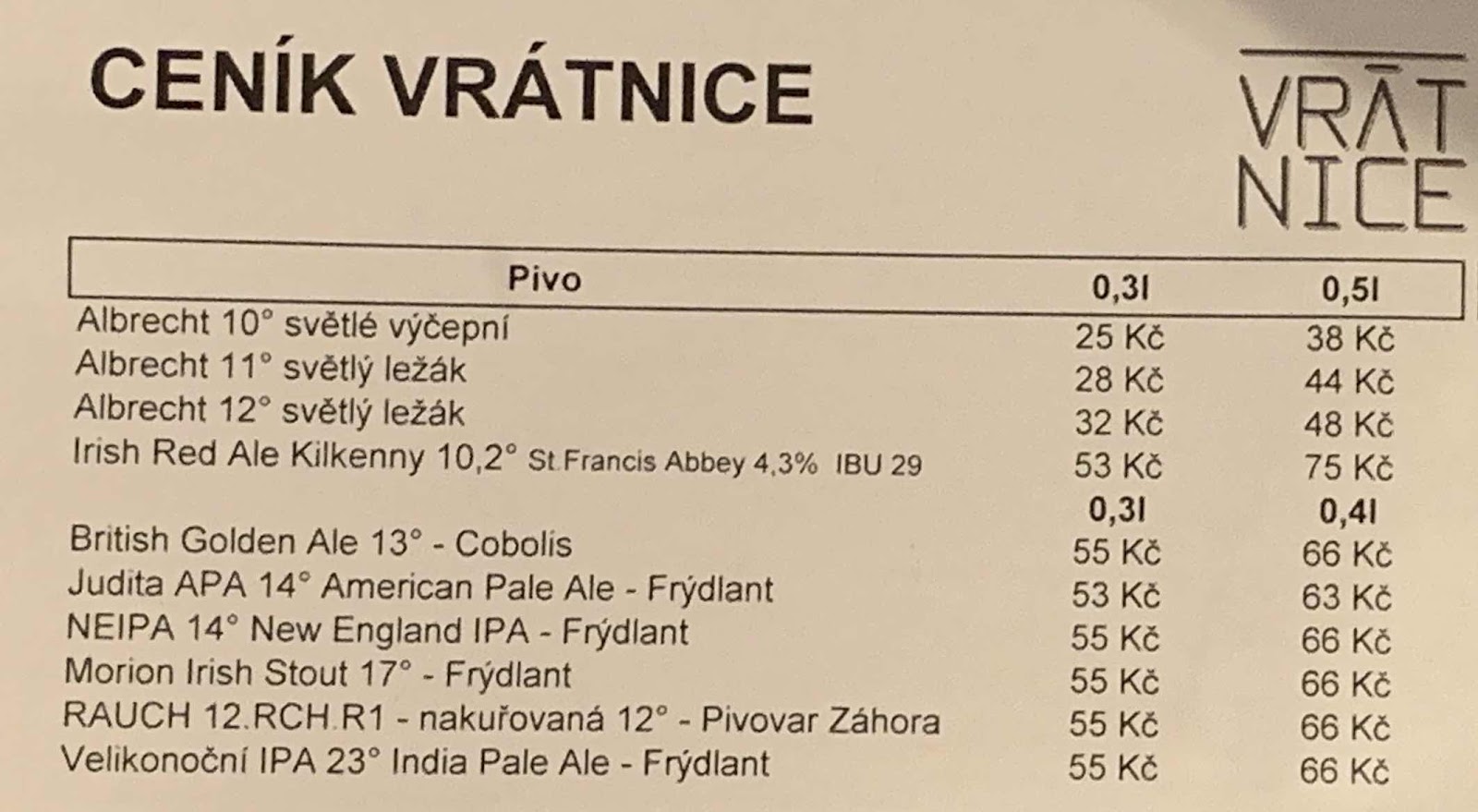 I started with Albrech 12º Světlé Ležák. A very enjoyable beer. Some Frýlant beers are sold under the Albecht name and others just Frýlant — they are all from the same brewery. 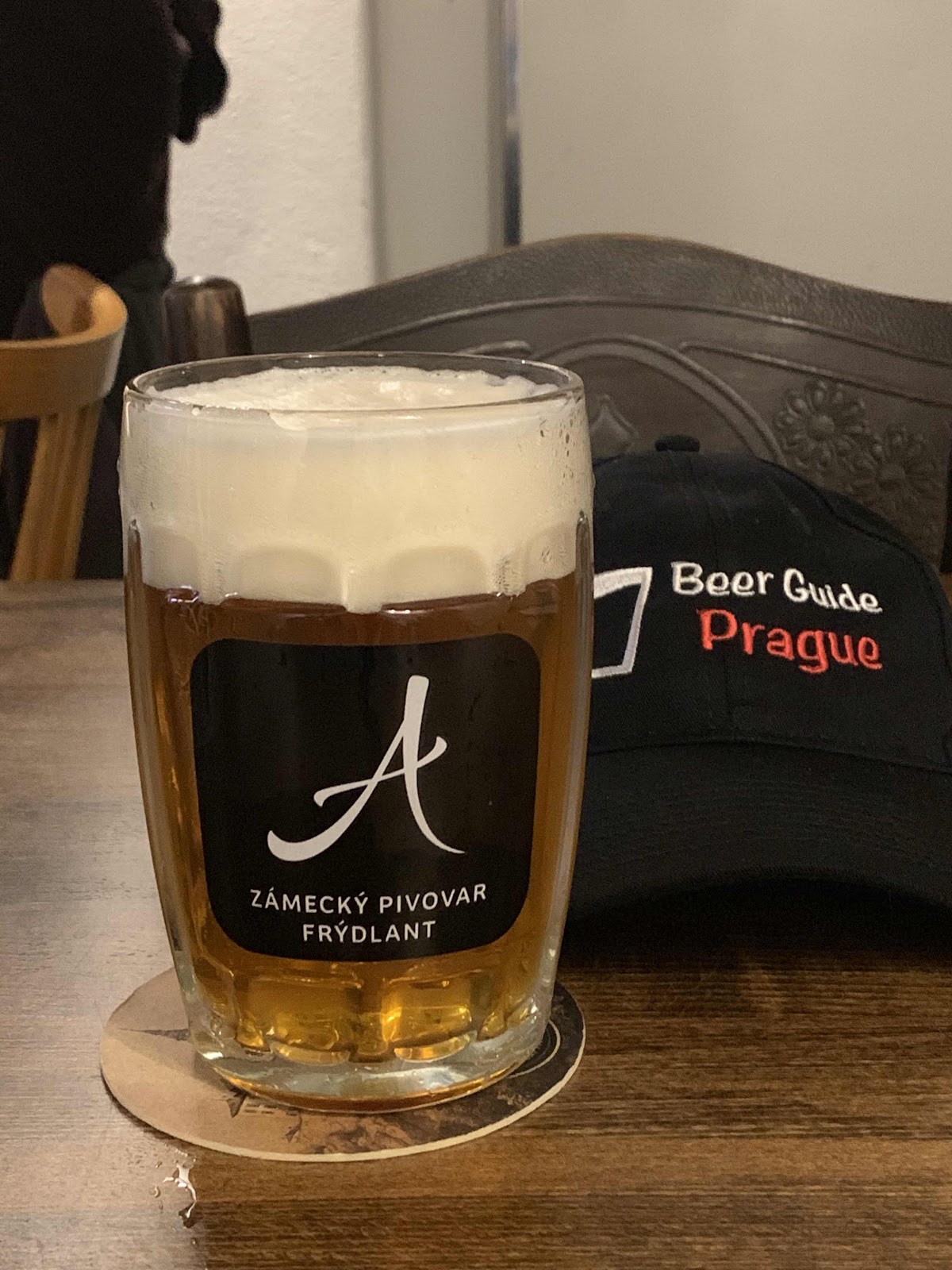 I was feeling a bit pecking, so I ordered some hermelin cheese (a Camembert style cheese, marinated with onions, garlic and peppers) 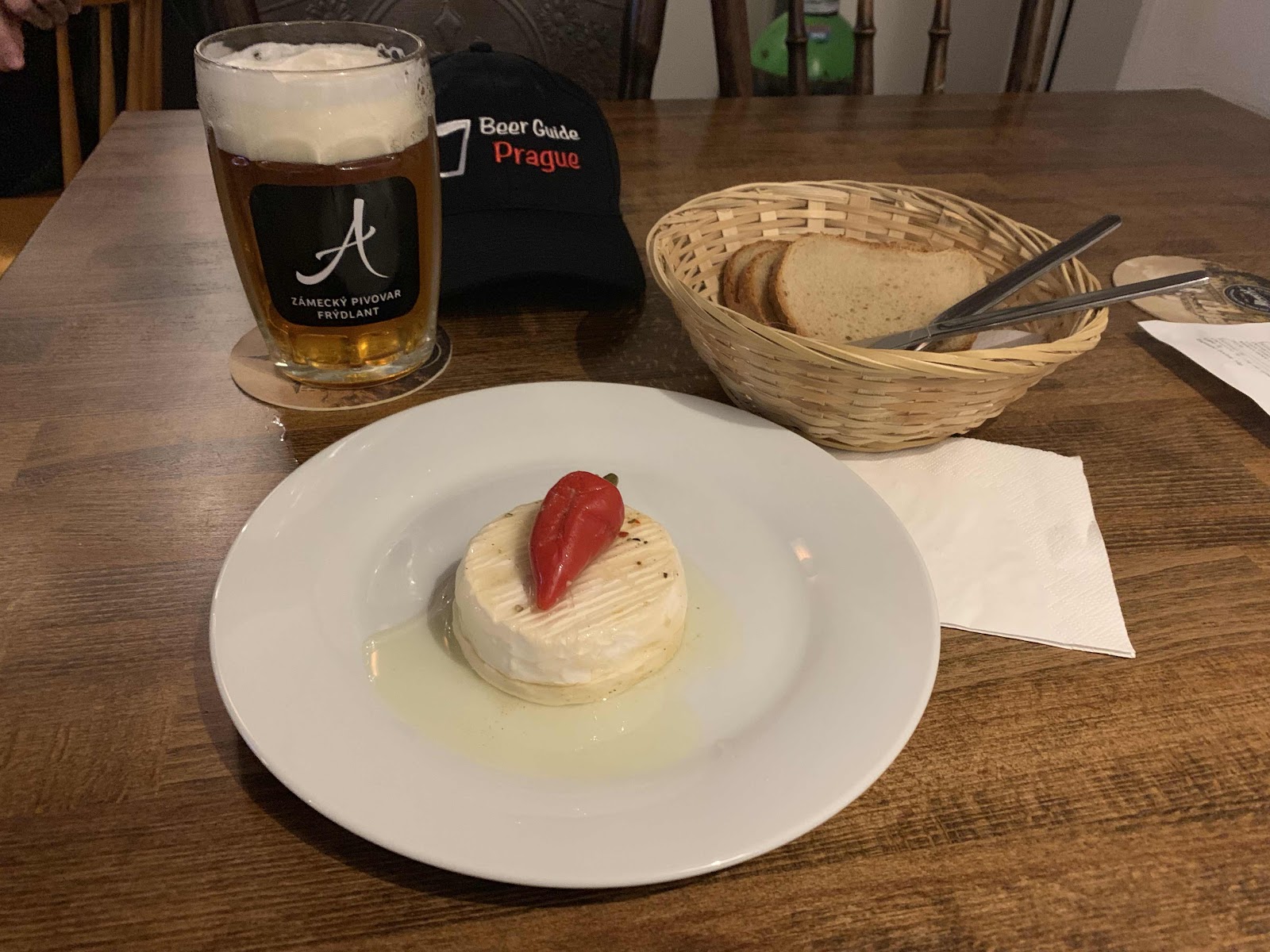 After that I was still a bit hungry so I ordered some utopenec, a similarly marinated spicy sausage. These are stable Czech pub snacks. 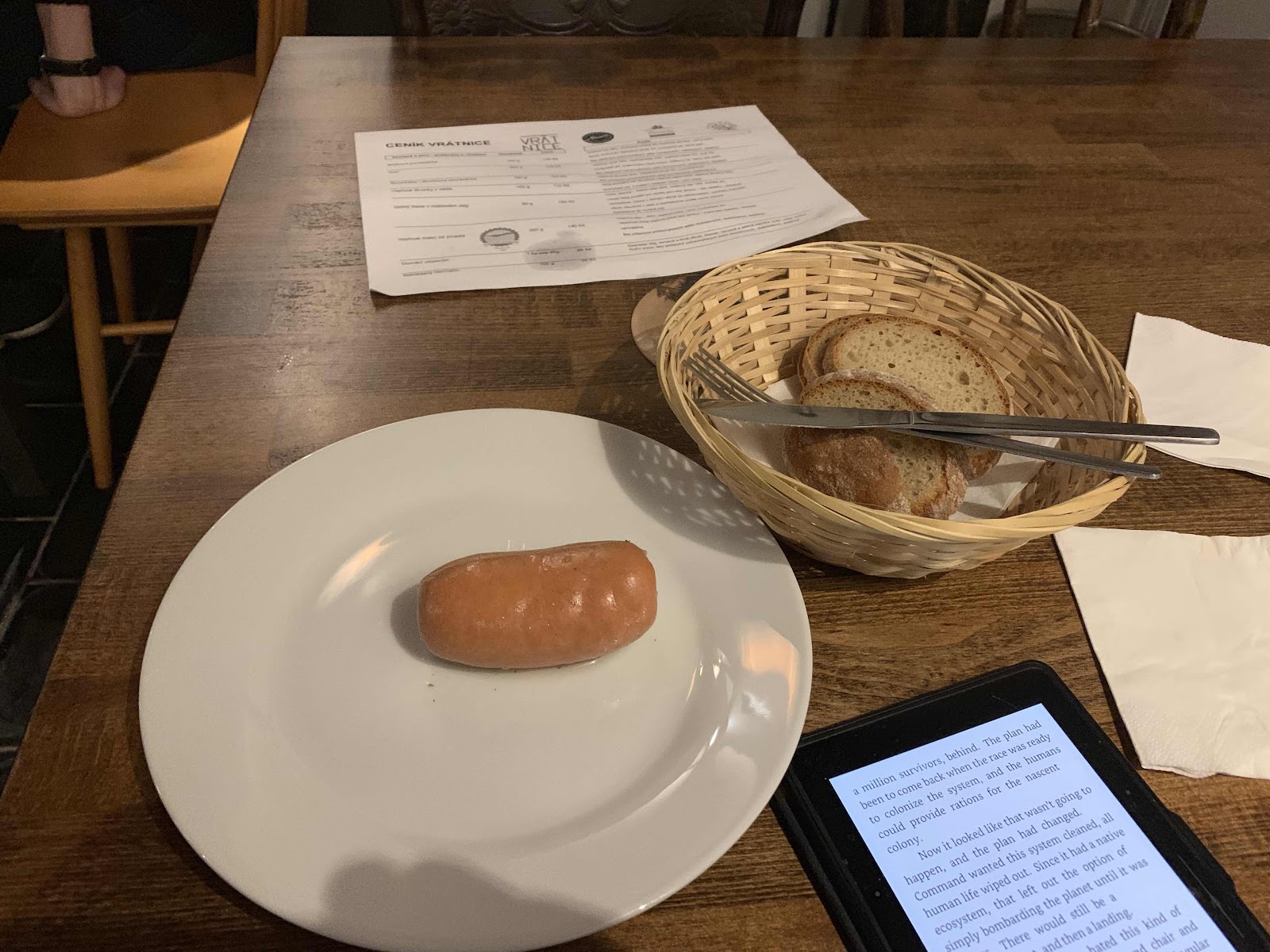 Next I ordered the Rauchbier from Pivovar Záhora. If you follow me on Twitter I mistakenly said it was from Albrecht, probably because of the glass. 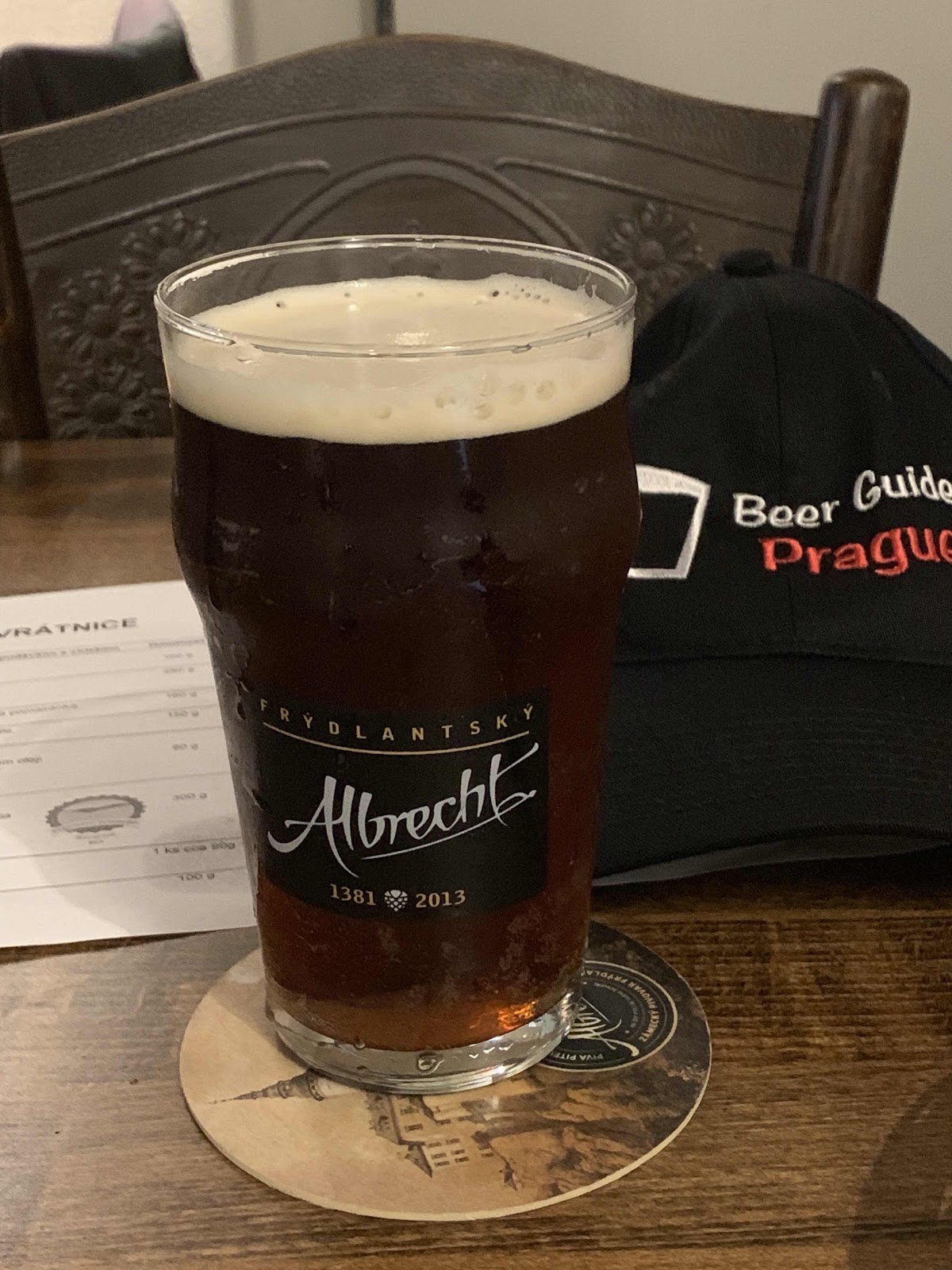 I enjoyed the first two thirds of it, but there was a little too much phenolic in the smoke and it built up. I had a hard time finishing it. If I’d ordered the .3L it probably would have been perfect.
The rain was starting to come down again and I had a trek back to my hotel so I called it a night after that.

Matuška seems to have picked up a rogue R in your post, Fred.

I thought I got most of them, looks like I messed one. Misspell it once and autocorrect rules.

Fixed it. If you’re still see it the it’s probably cached in your browser...