Day four in Prague was pretty much the same as day three — I got up, drank beer, went back to the hotel.
Oh, you want more?  OK.
I took tram 20 all the way out to the end of the line, Divorká Šárka. Across from the terminus is Hostinec nad Šarkou, home if Libocký Pivovar. This is in the Liboc district Prague, hence the name. 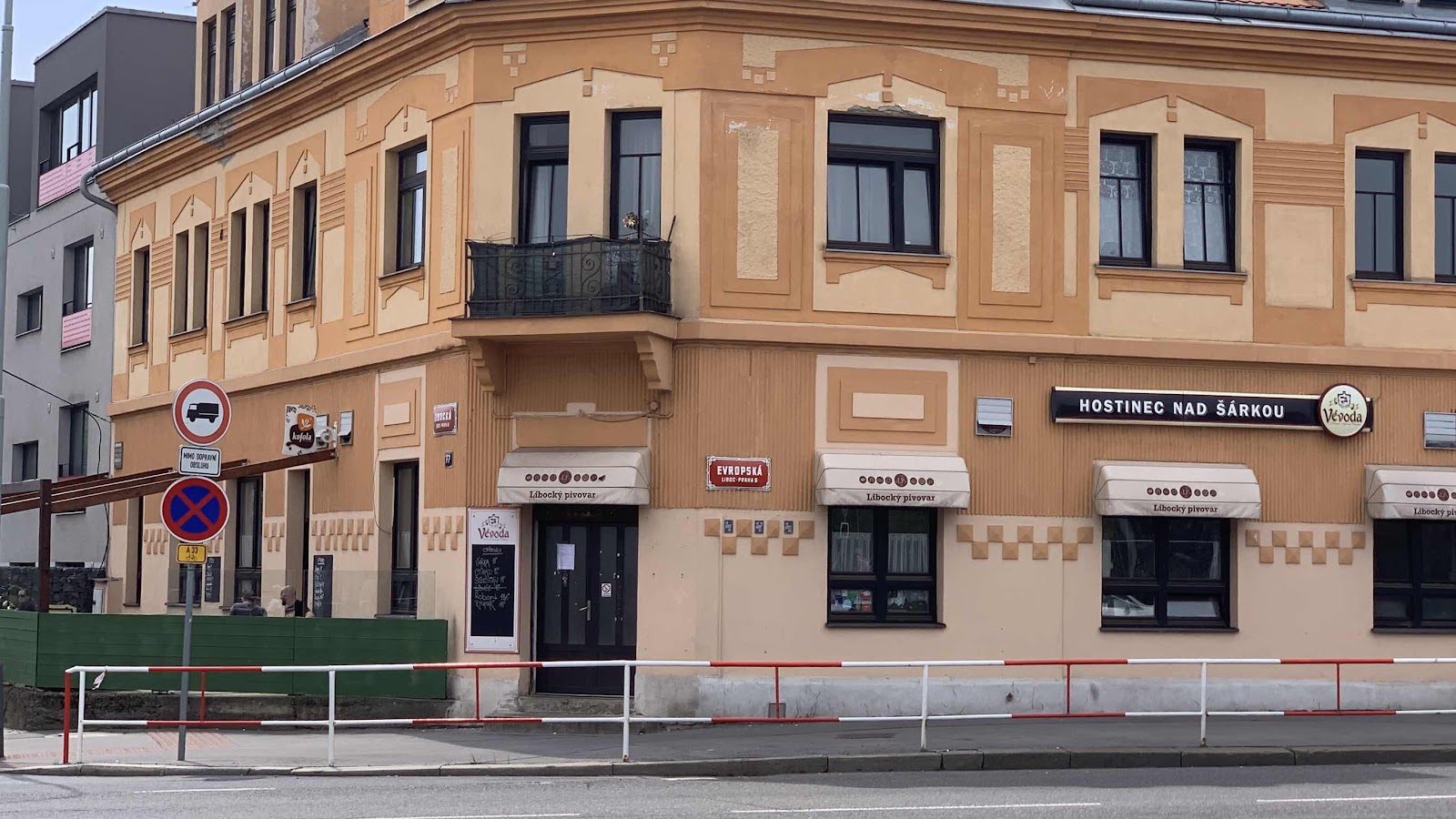 They had four of their beers on tap plus one from Rychtař. 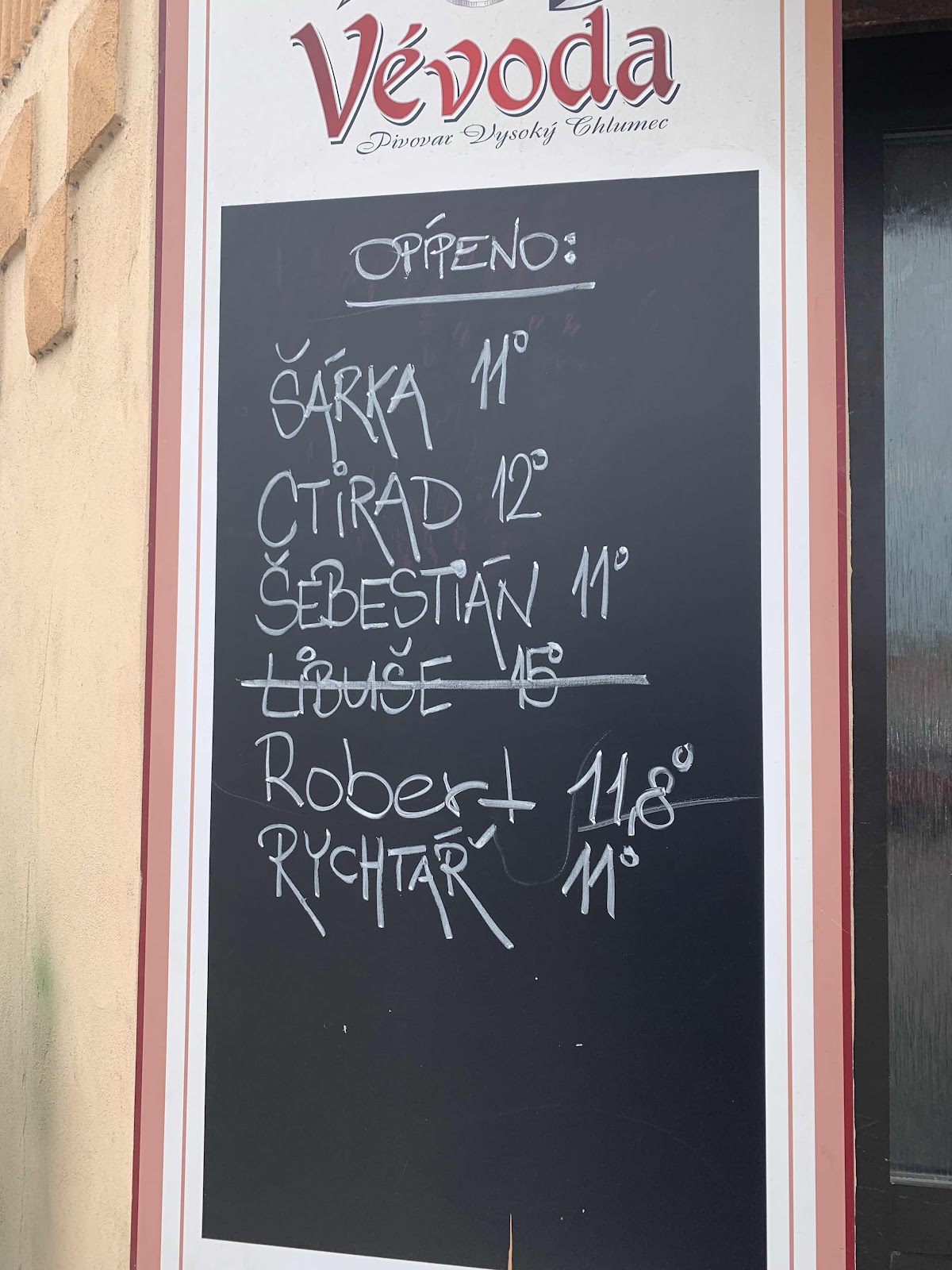 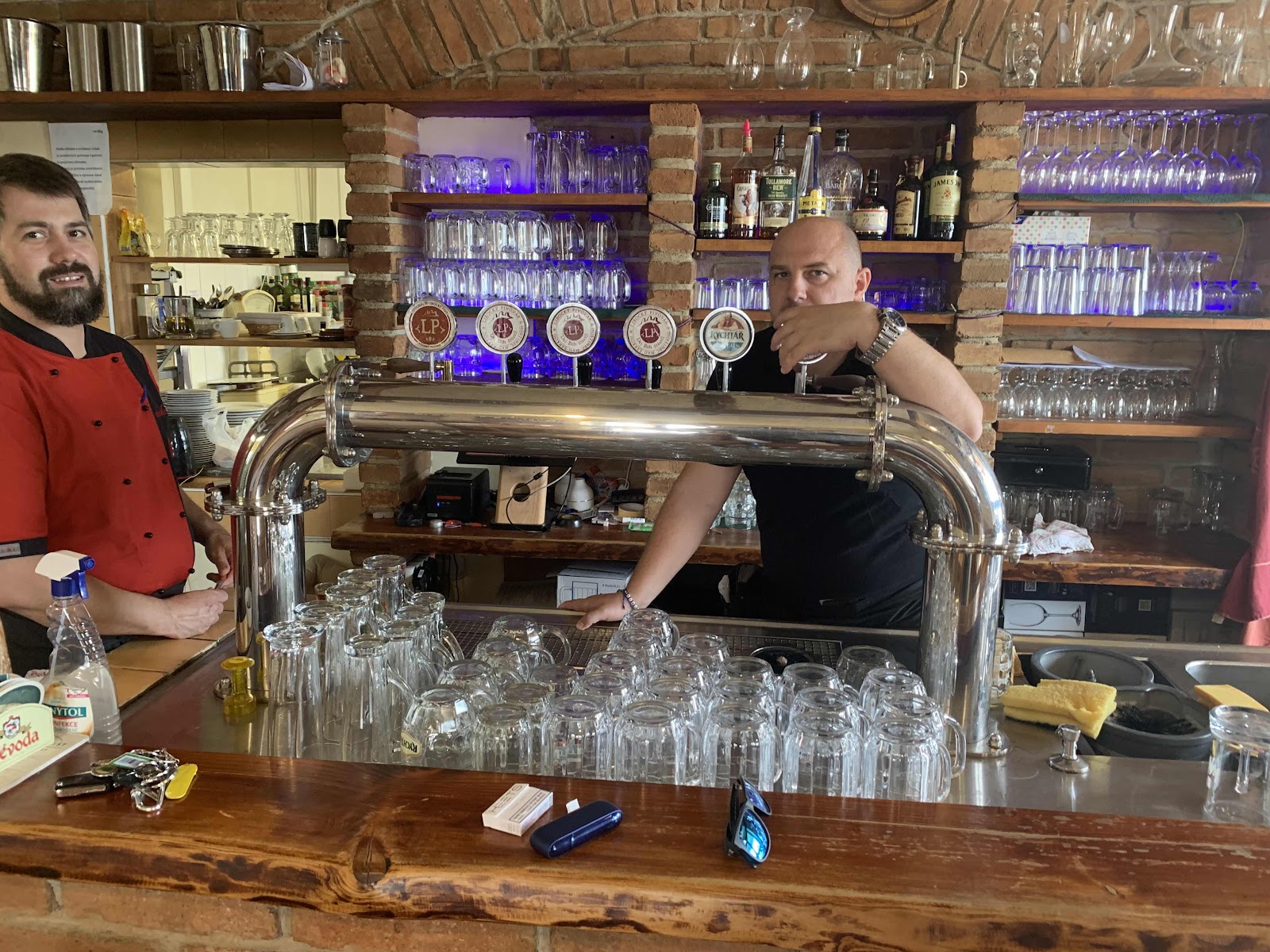 As is my usual, I started the the Šárka 11º a nice Světlé Ležāk. 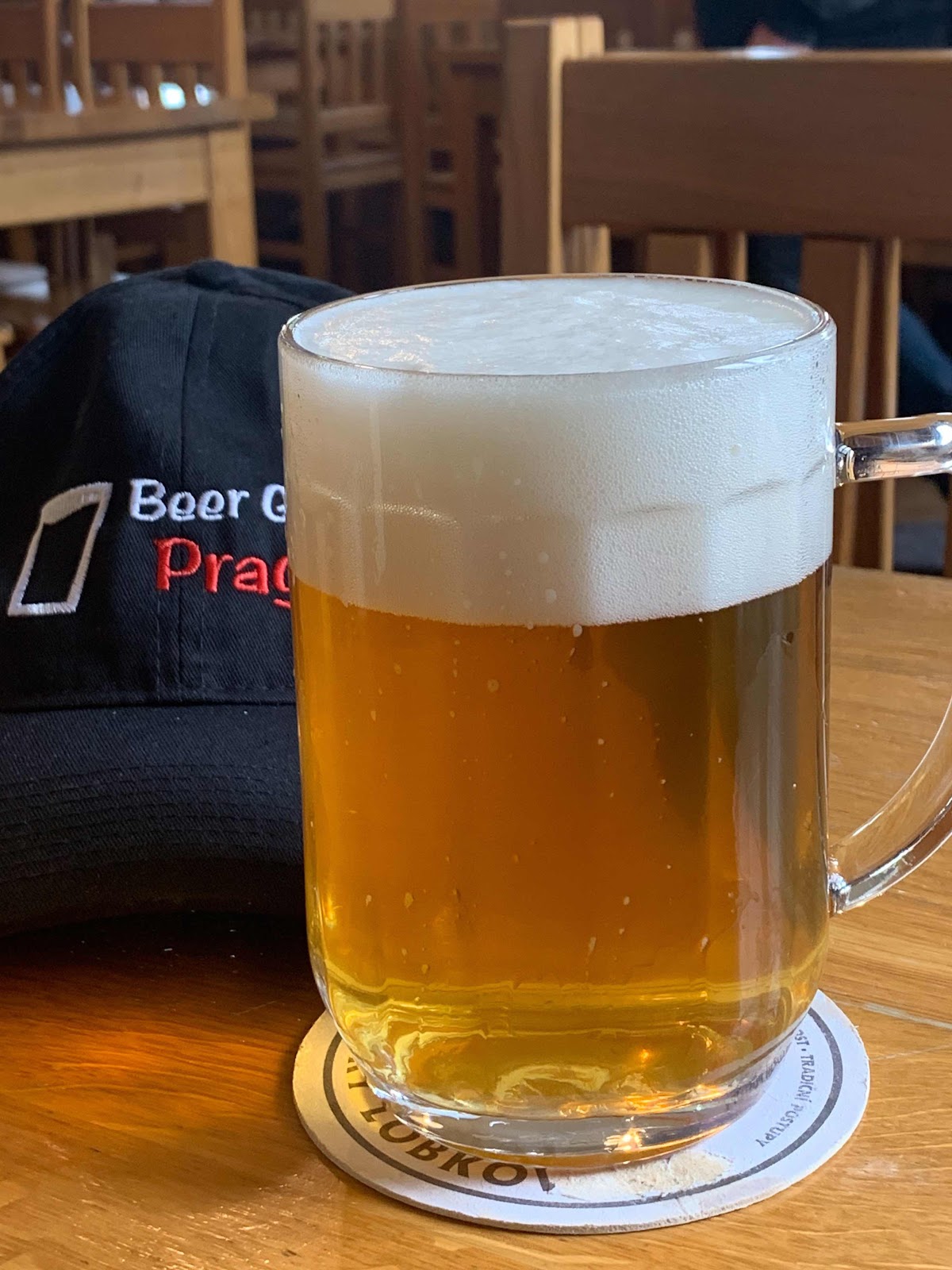 I was able to puzzle enough out of the menu that one of today’s soups was mushroom, so I ordered one. It was good. So was the bread. 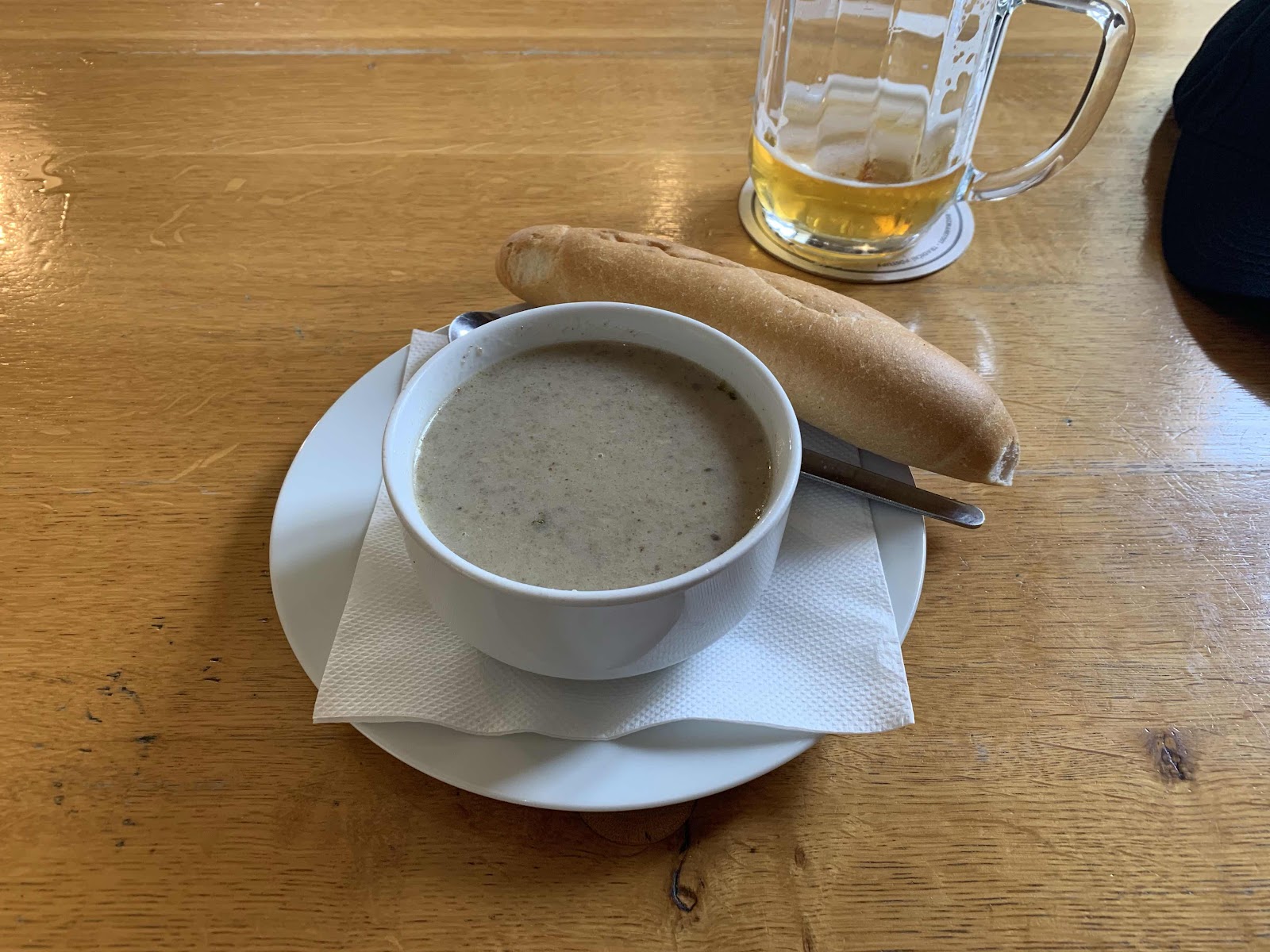 They had descriptions of the beers hanging over the bar and when I can in I took a picture so I didn’t have to get up and look. Two of the remaining were APA/IPA styles. One placard was crumpled and I couldn’t read this description. On the menu was a dish cooked in “dark beer” so I figured the one I couldn’t read was the dark beer, so I ordered the Šebastián 11º. 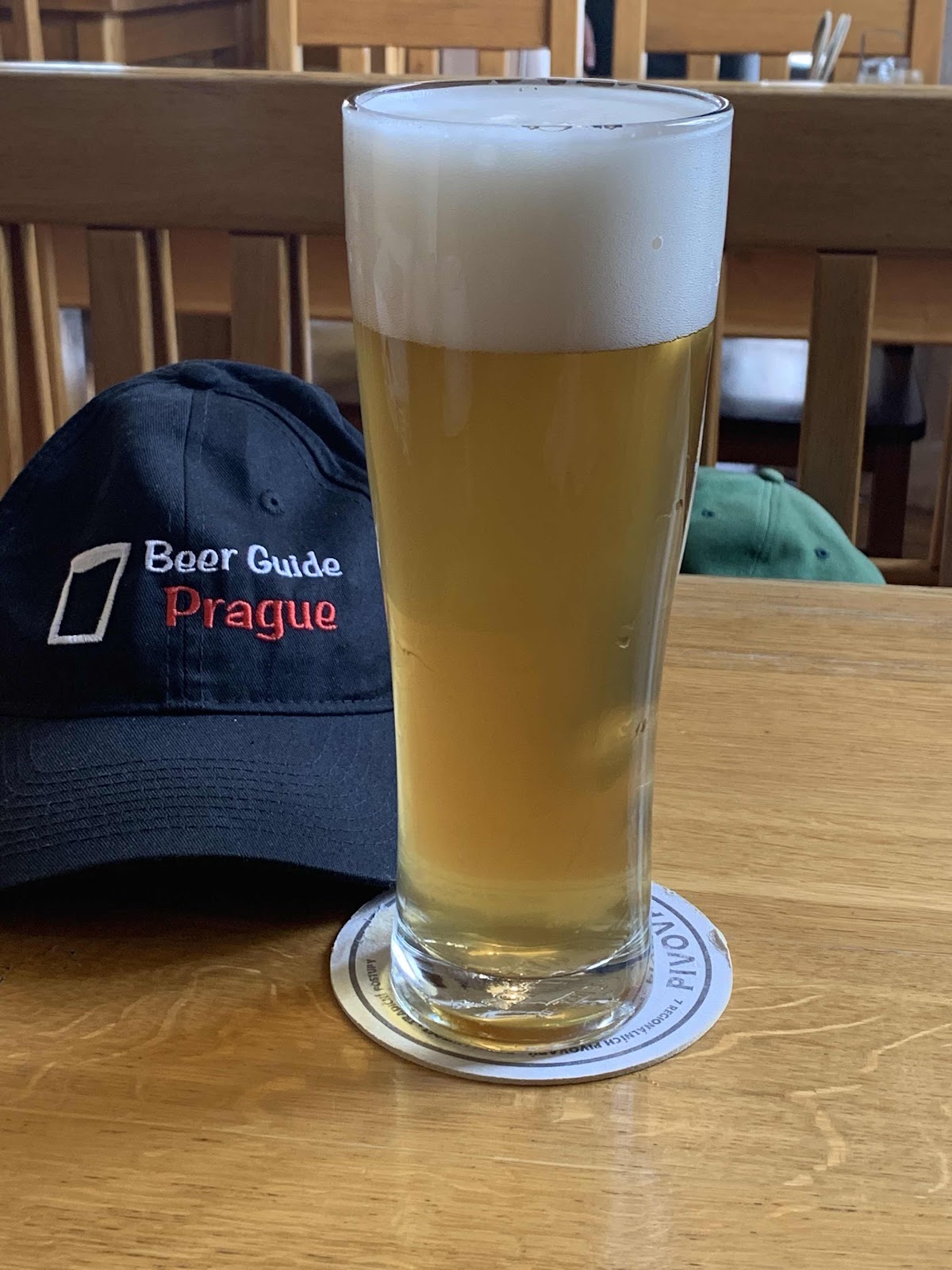 Well, it turned out to be a wheat beer. They are not my usual favorite but this one was fine. They are not worried in Kelheim, though.
I was still a bit hungry so I ordered the disk that was “baked in dark beer” — it was sausages in onions and peppers in a spicy sauce. It was good but “Czech spicy” which is an order of magnitude or so down from, say, “Thai spicy” 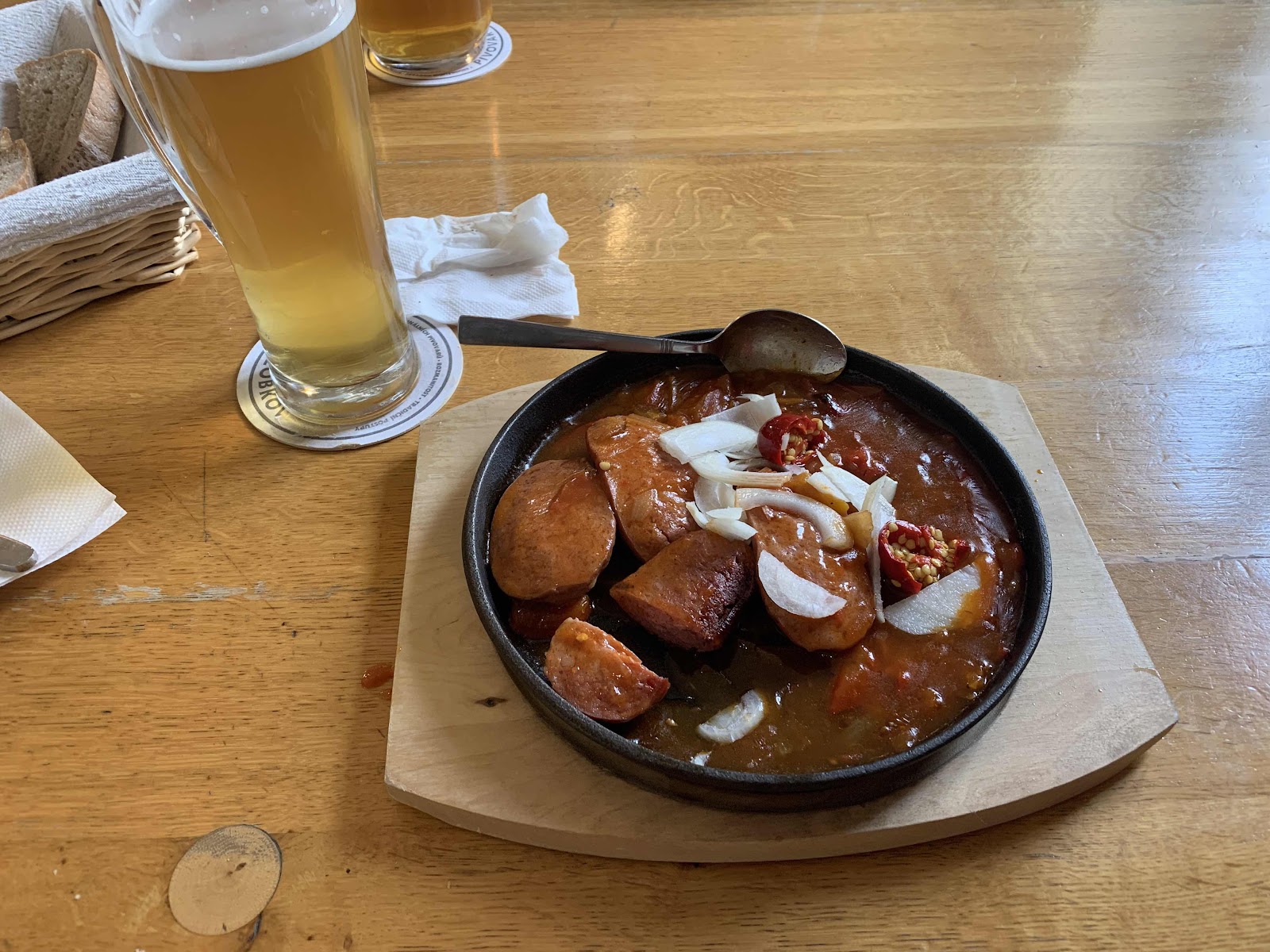 The pub itself was very comfortable. There was a back dining room that looked a little more formal and a patio, though the patio had no shade. 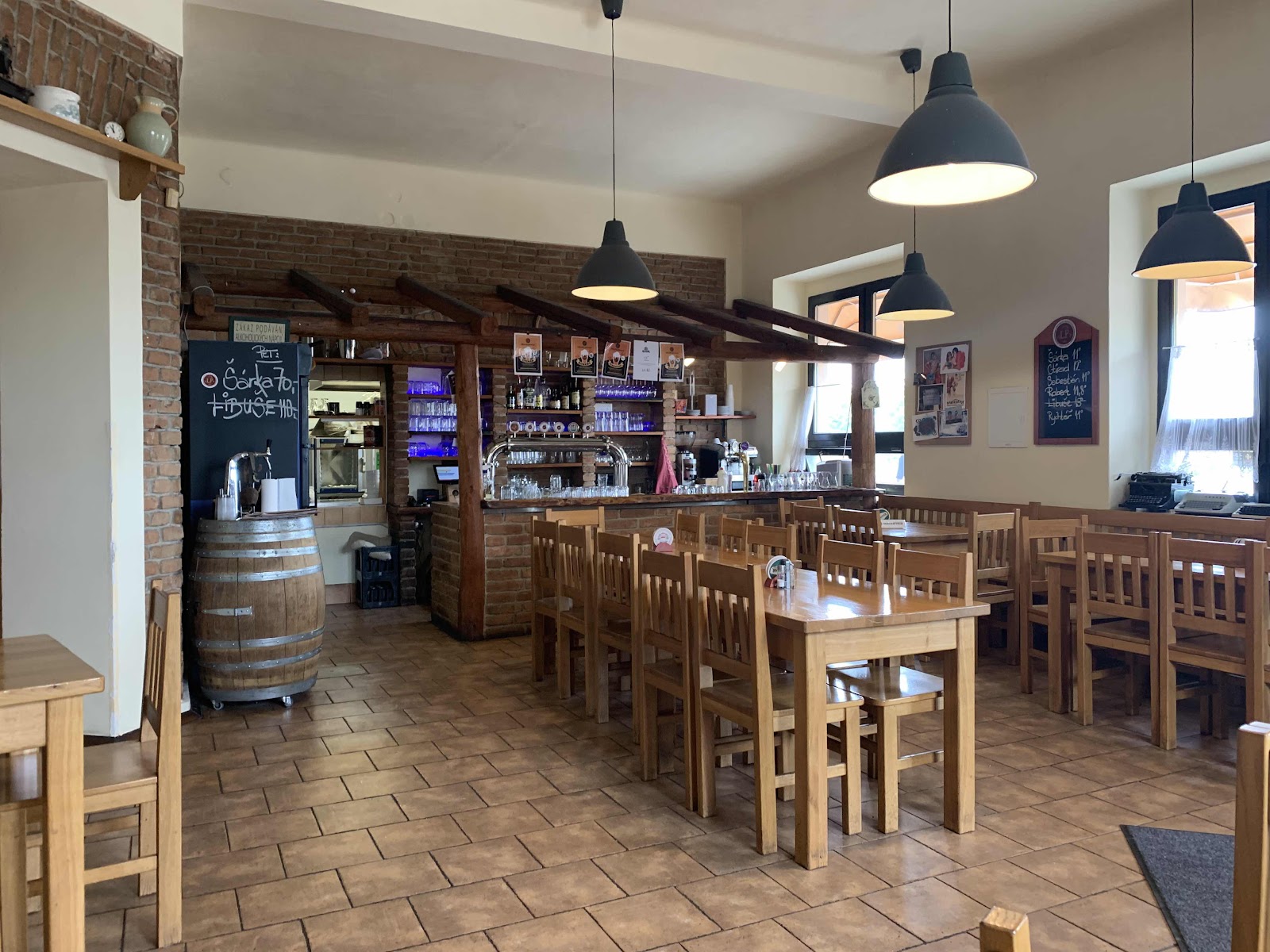 So we hopped back on the tram and headed back towards the center. After 20 minutes or so we were at the Letenské Náměstí tram stop and a few minutes walk came to Pivovar Lajka. When I visited last year it was “Cafe Lajka” but a couple of months ago they opened a brewery and changed their name. 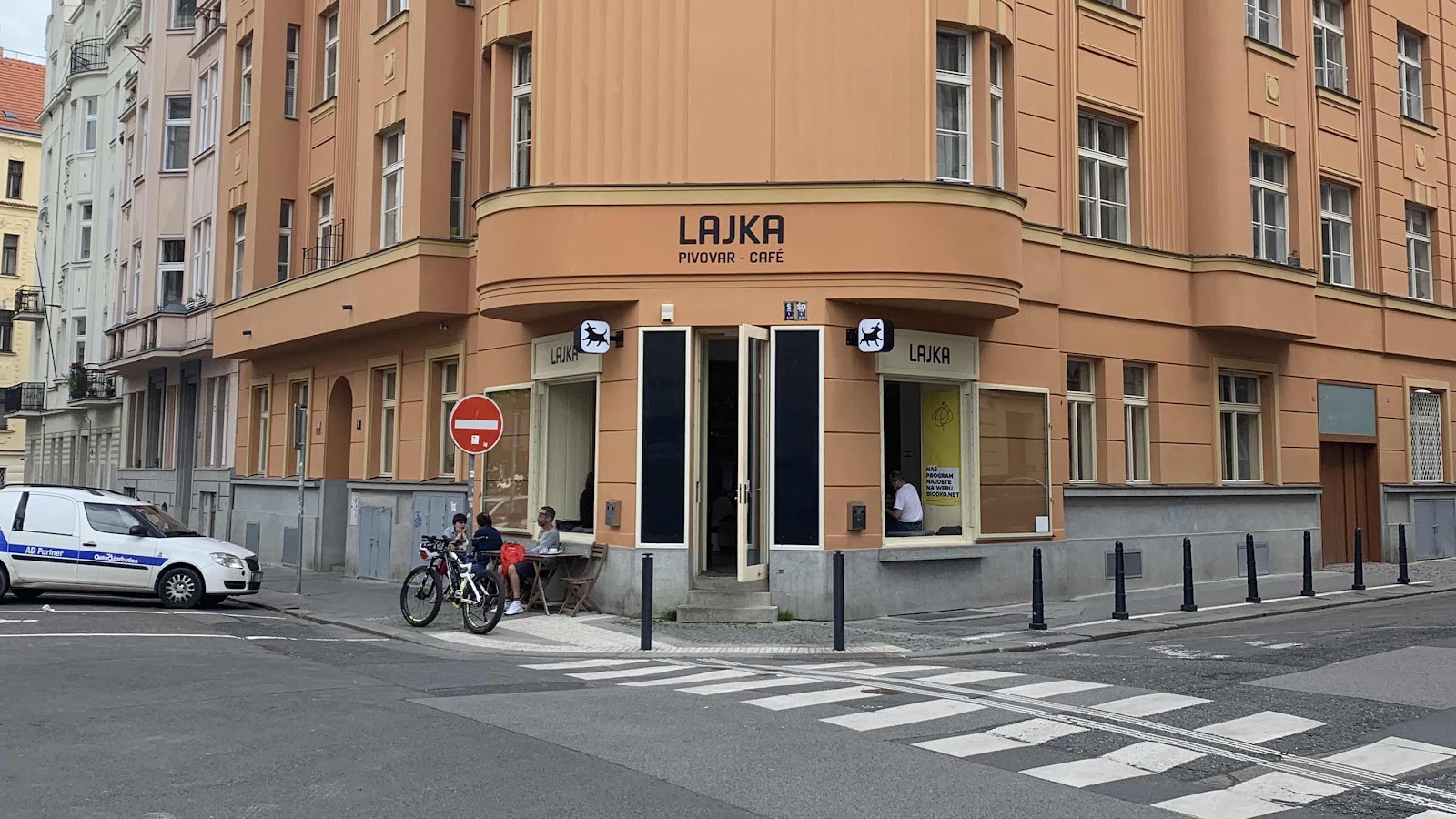 They have five beers on tap (up one from last year) but only one of the house beers. 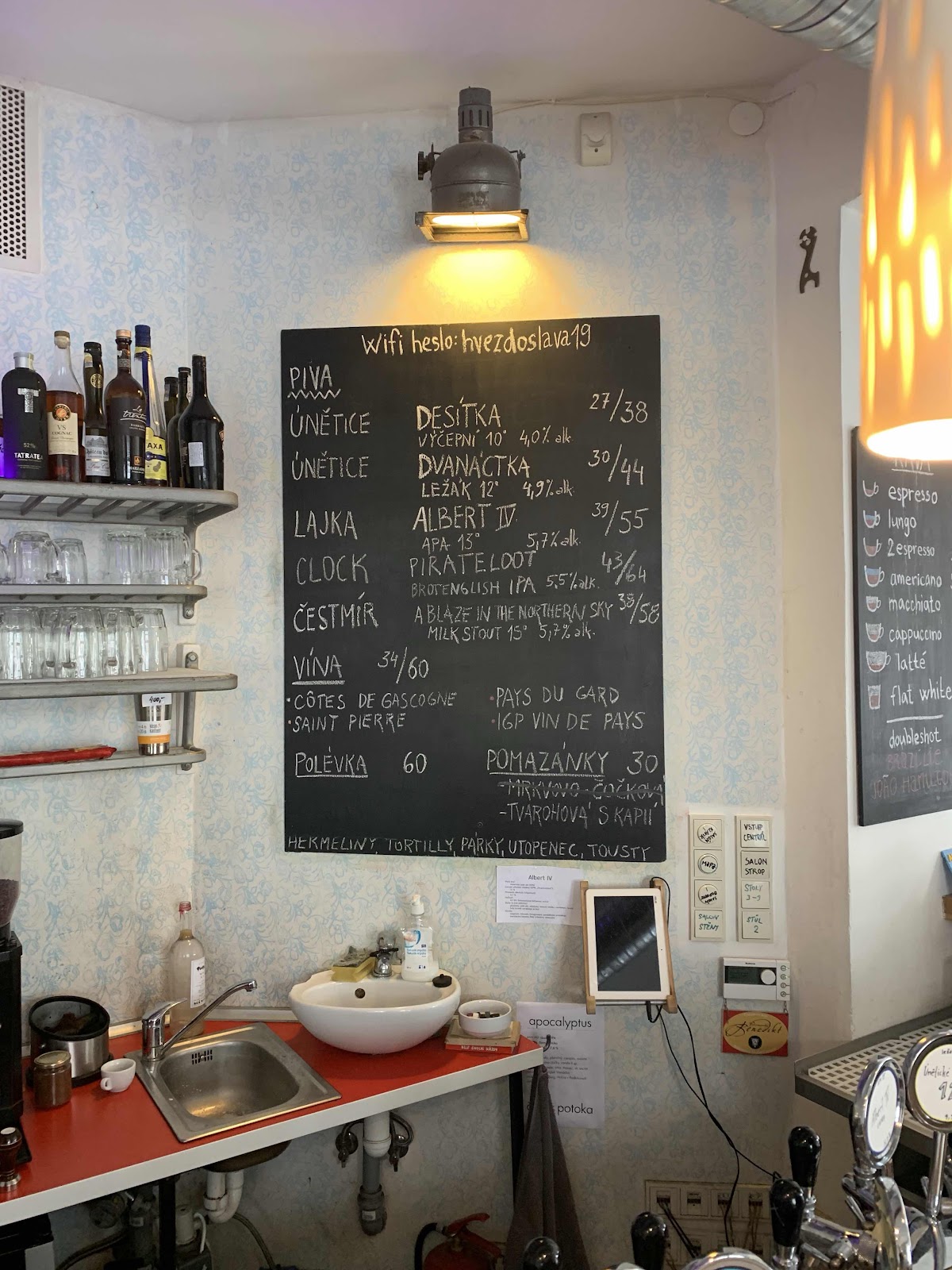 I had the house Albrech IV 13º APA. It would have been rude to do otherwise. A very nice beer, I enjoyed it. 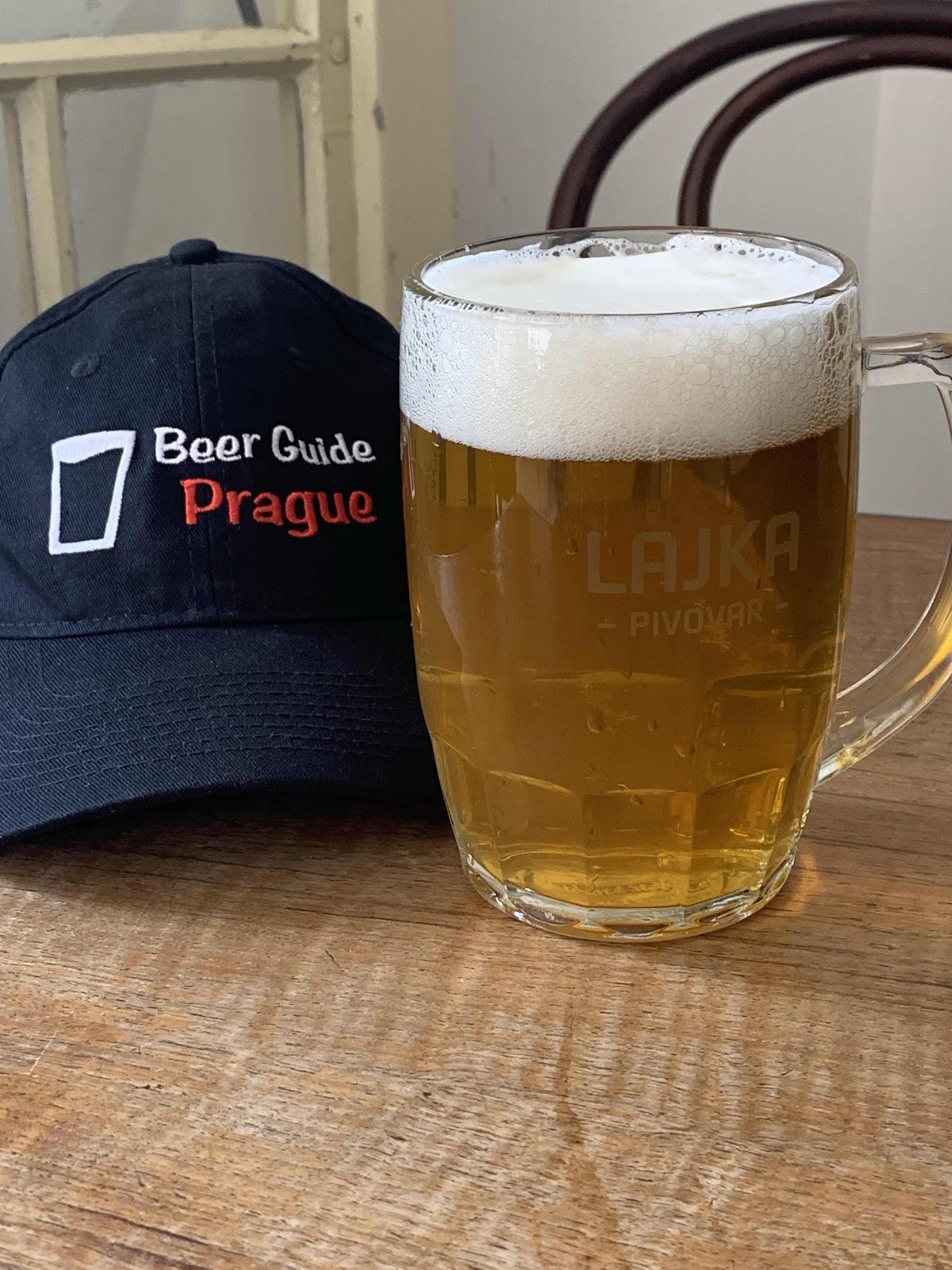 While drinking my beer I could see a young boy sitting outside with his mother and he had a half liter mug of what looked like a stout — very dark with a very creamy white head. He was downing it a prodigious rate.  At first I thought maybe he was tasting his mother’s beer, but he kept at it. As the only dark beer on the menu was a 5.7% Milk Stout I was suitable impressed. This kid has a future. Turns out it is a Czech soft drink, Kofola, that pours with a big head, sort of like the A&W Root Beers I remember back in the day.
We walked back towards the tram stop and a little past to a green building, the home of Klášterní Pivnice. 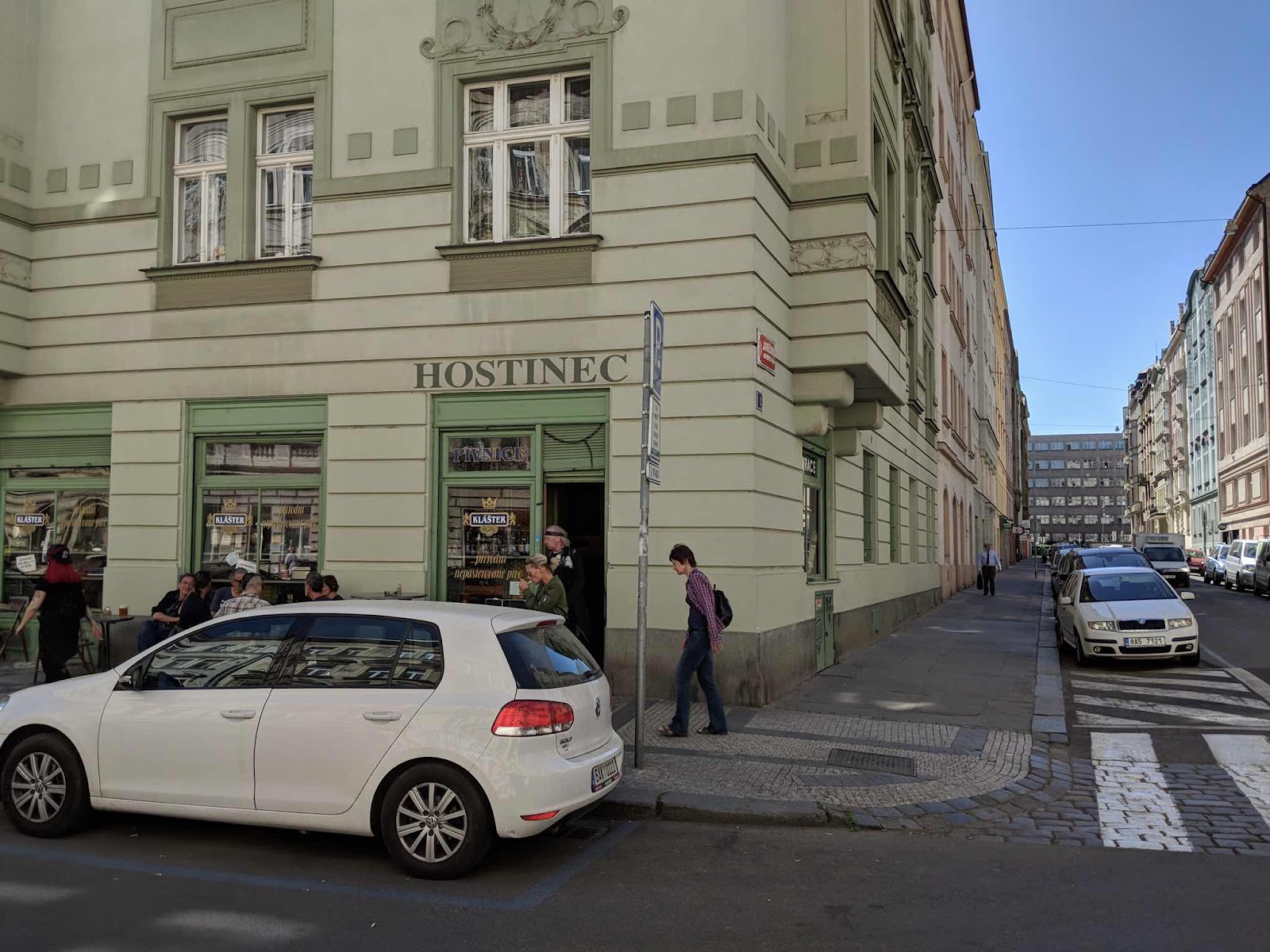 This is quite a place. They are open from 9:30am until 9:30pm.They have two standard taps, a Světlé Ležāk from Chotěboř and one from Klāšter. Then there are two rotating taps, the details of which are on sign on the front door. 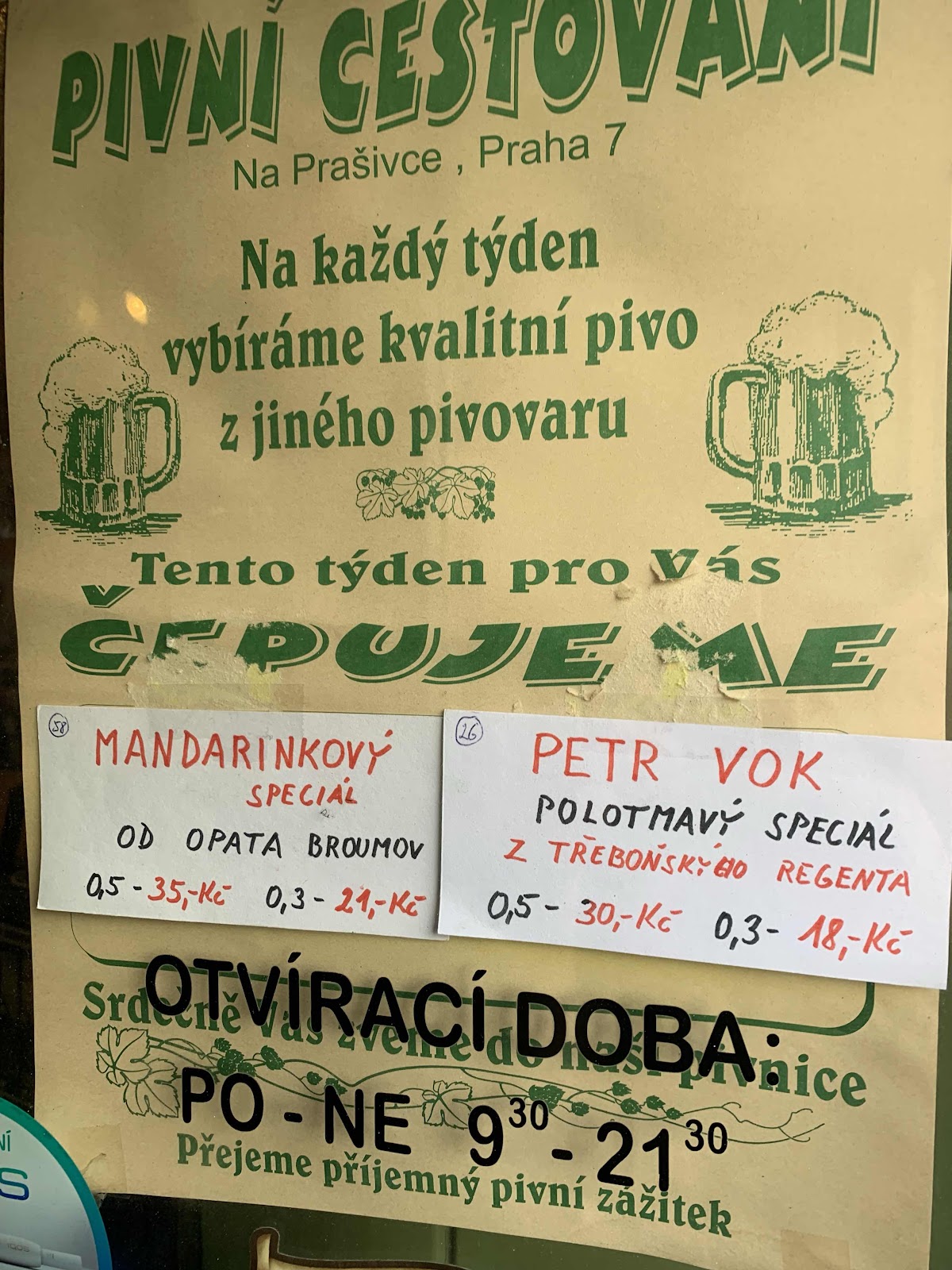 In the past, I’ve found the Chotěboř and Klāšter beers to be a bit buttery for me, So I usually have one of the rotating beers. I went with the Pete Vok polotmavý, and had a small one, because that was Kč 18 which works out to 78 US cents. That’s right, a beer for less than a buck. And a good one at that. 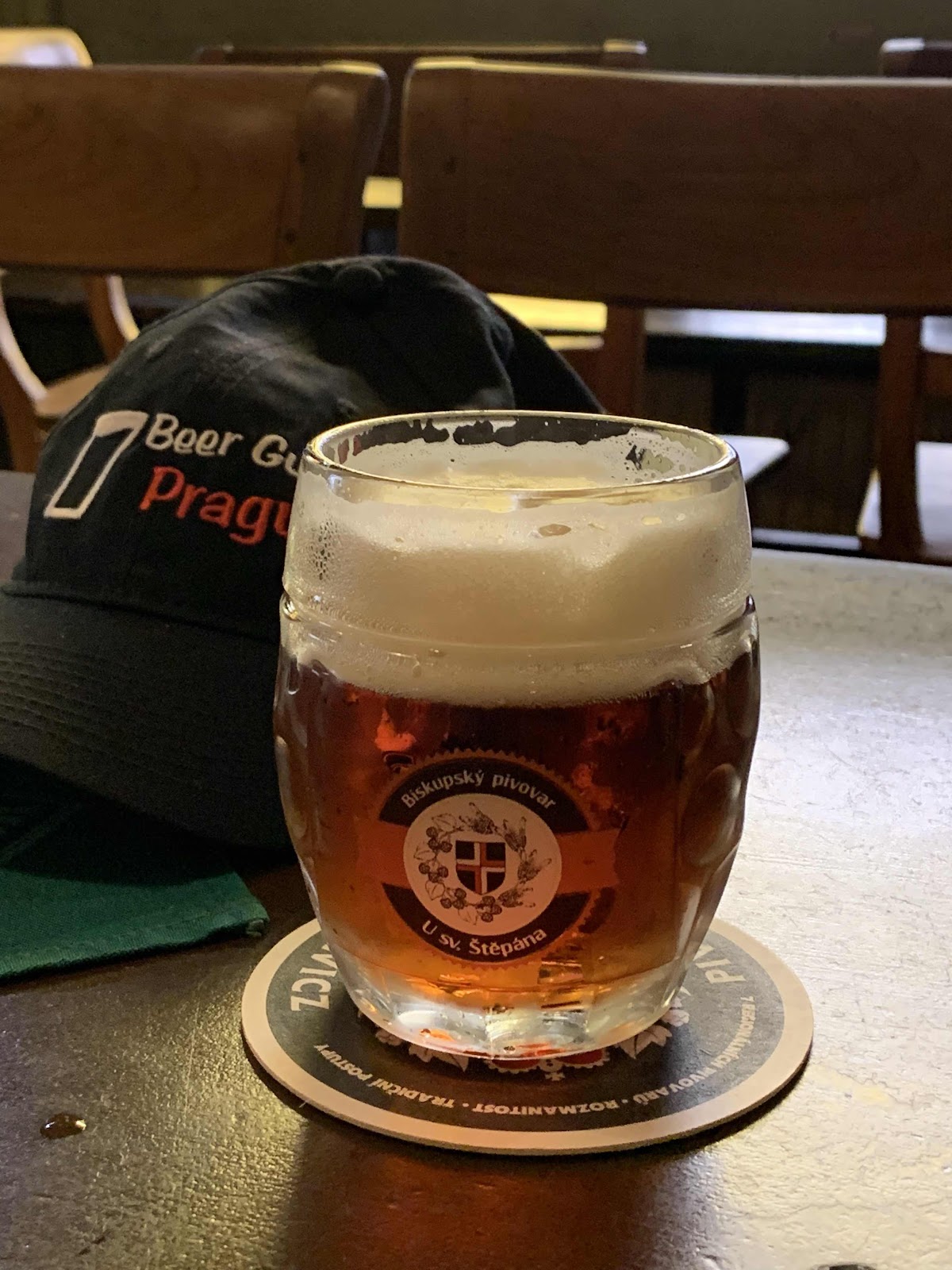 These are some of the cheapest prices I’ve seen in Prague. There is no WiFi, no food, no hipsters in sight. The inside is decorated with football (soccer) memorabilia and the windows have old radios. A totally unique place.
And in the Gents was this sign. 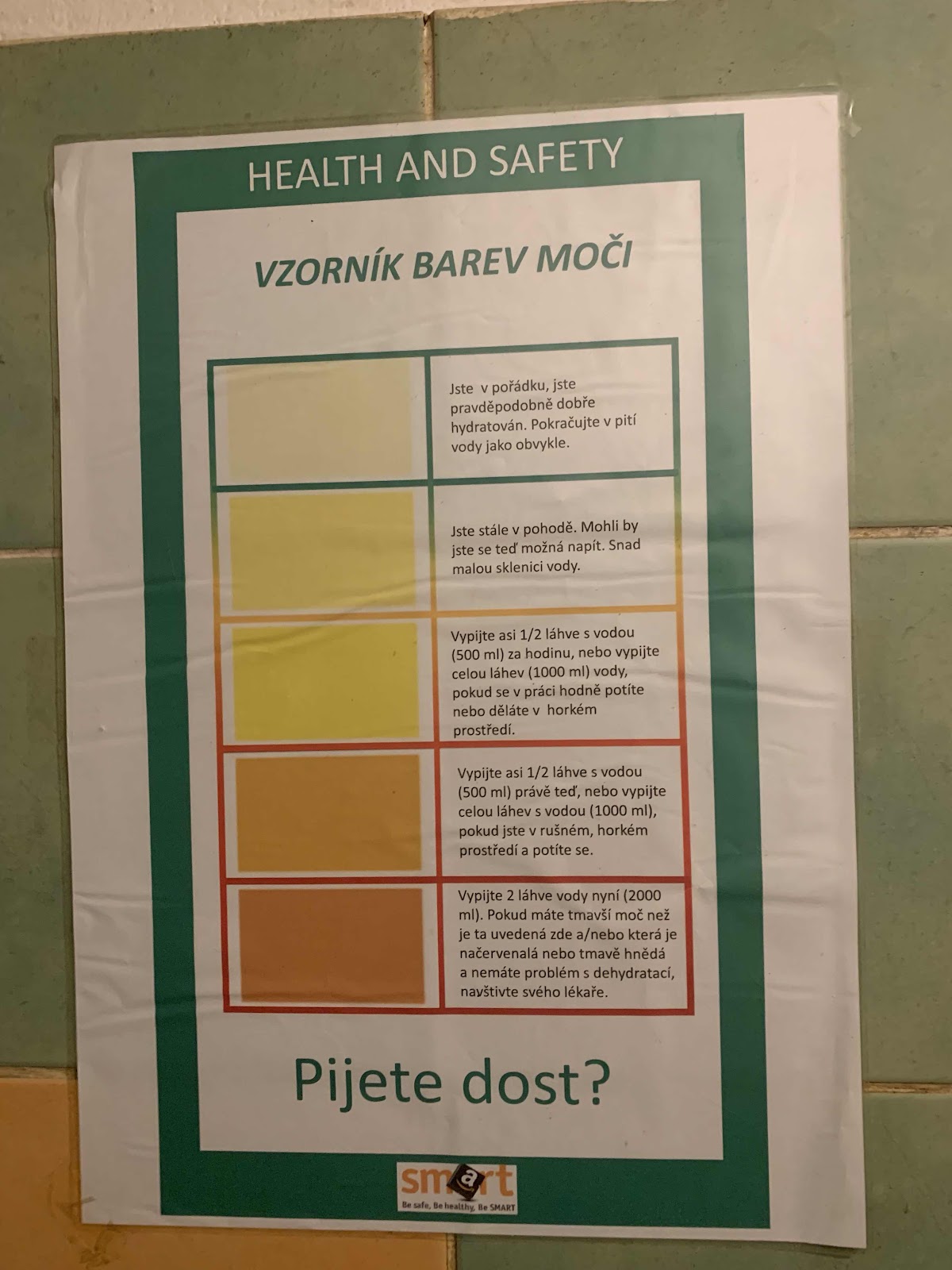 From google translate, it seems to be all about hydration, with the darkest color saying “Drink 2L of water now!”  This has been your public service announcement for the day.
Around the corner used to be a place called Pivní Club 300. The owner thought that adding CO2 to a beer was a bad thing so he dispensed them all with compressed air. That would oxidize the beer fairly quickly but he claimed it wasn’t a problem. I had one good beer and one oxidized and never went back.
I saw recently that it is now called Hangár and from pictures on the web it looks like there was a total renovation. I was hoping for a new owner. 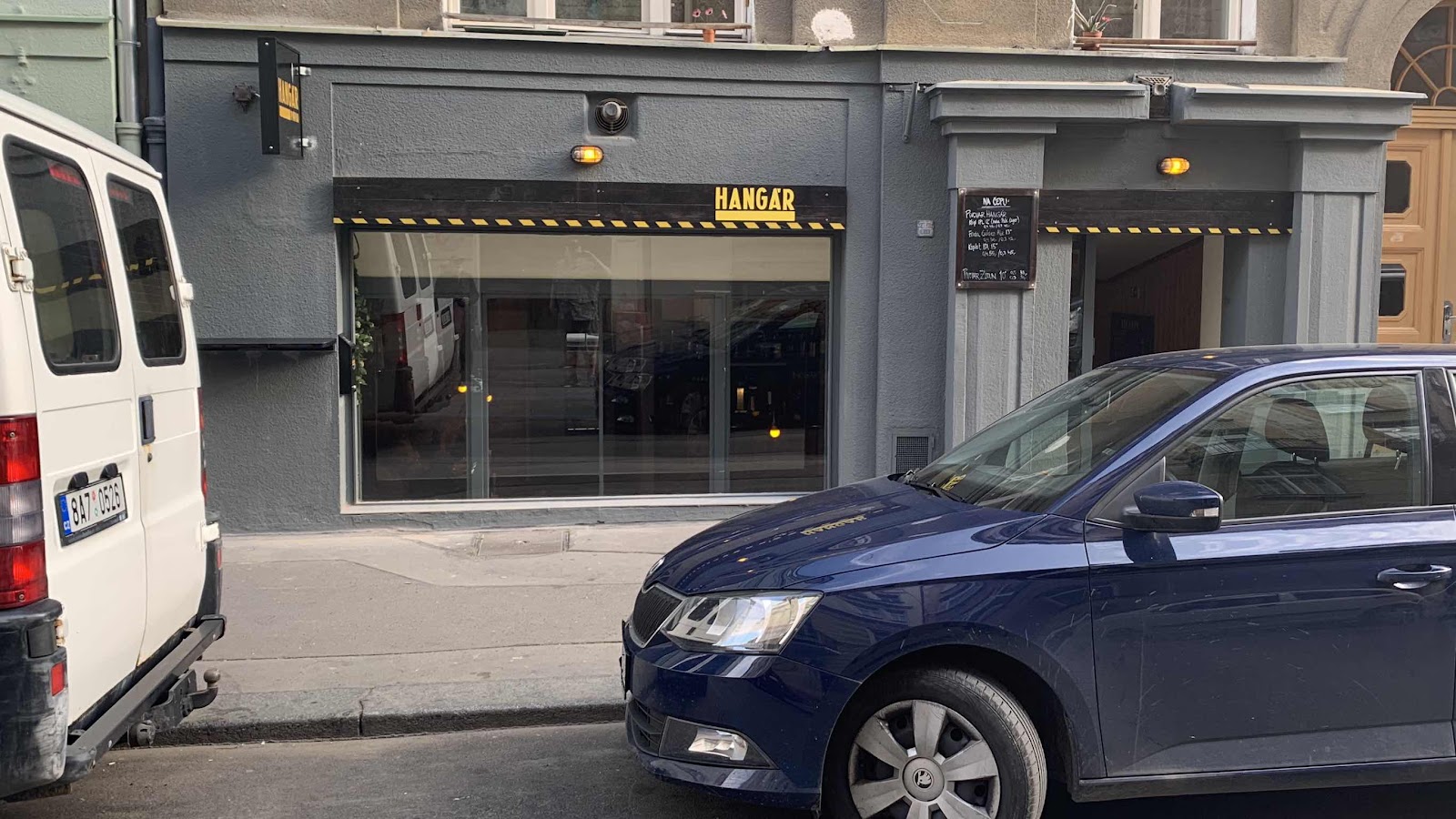 The old place was closed on weekend and somehow I thought that continued but they were open.  It turns out Hangár is the name of their “flying” (i.e. contract) brewery. They had 3 of their beers on tap (normally it is 4) and one from Zloun were their beers are brewed. 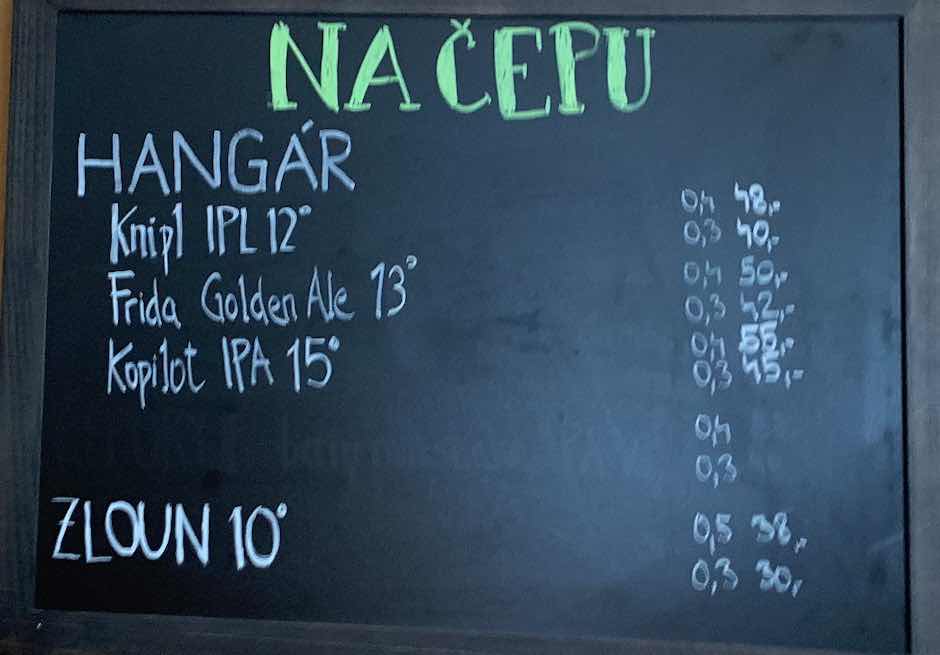 I went with the Knipl IPL 12º. It basically is a hoppier Světlé Ležāk and I enjoyed it. The new owners are originally from Munich and I wish them luck. A worthy stop on a Letná pub crawl

I hopped on a tram to quickly check out a place people had told me about. I thought it was going to be a short ride but it turns out there is some construction going on and the tram makes a big loop around it. Like a 6 stop loop. But soon I was at Knihopec, which is one of the more unusual beer venues in Prague. It is a small bookstore that sells beer. There doesn’t seem to be any seating inside but they have a nice patio next to a park. They have two beers from Pivovar Chříč. I had what I assume the Pazdrát 11º  Světlé Ležāk 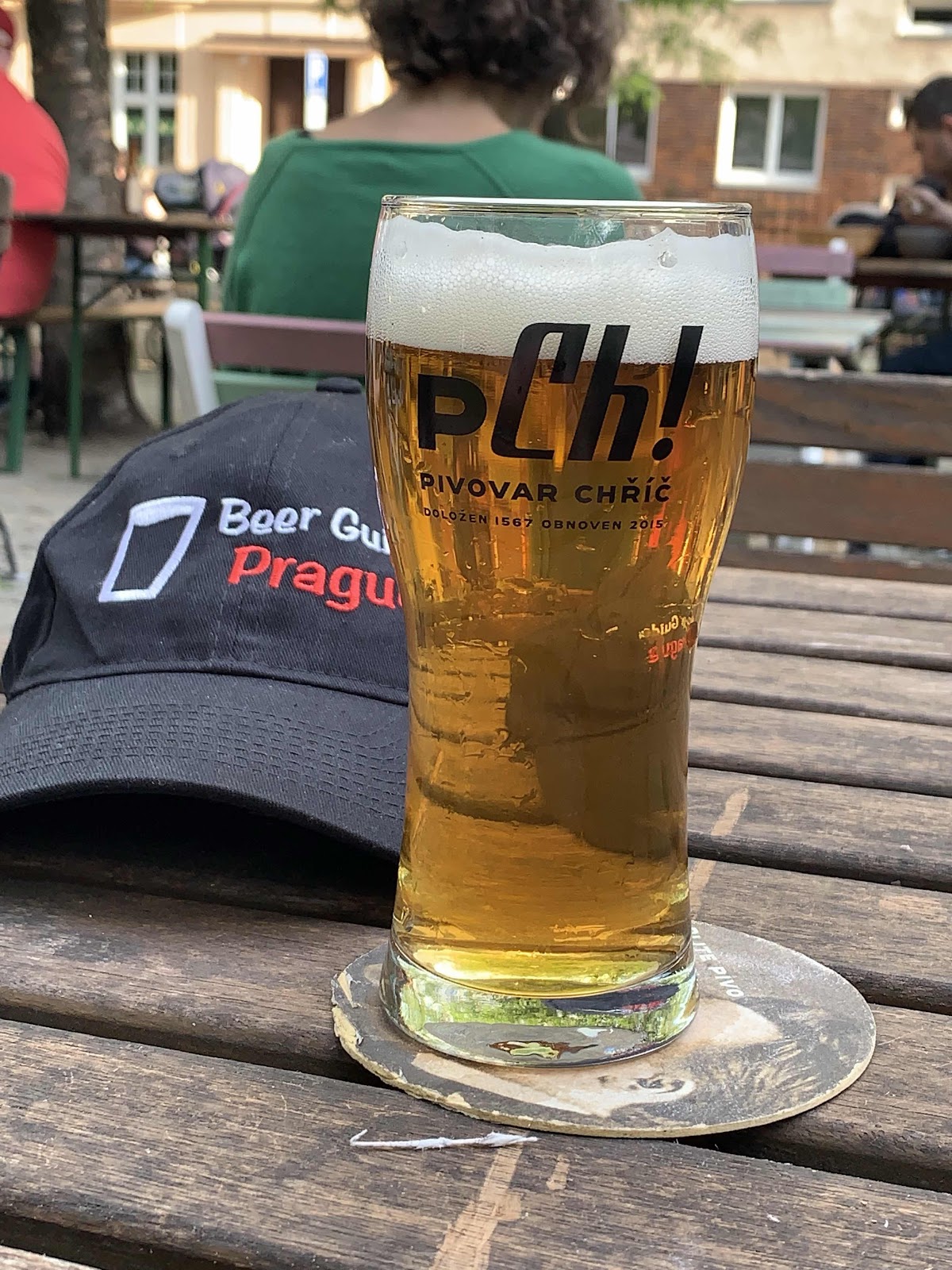 It was fine but not one I would go out of my way to drink. But it could just have been the end of a long day. I asked what the other beer was (there was no posted tap list) and the waiter said (in English) that it was an ale.  Sometimes in Czechia that just means a stronger bottom fermented beer and from looking at the brewery website this seems to be the case. There other beer is a 13º amber lager.
There has been tram construction all over Prague and one of my favorite pubs has been hard to reach due to closures. But those lines were restored over the weekend so I headed to Hostomická Nalévárna for some wonderful Hostomice beer. 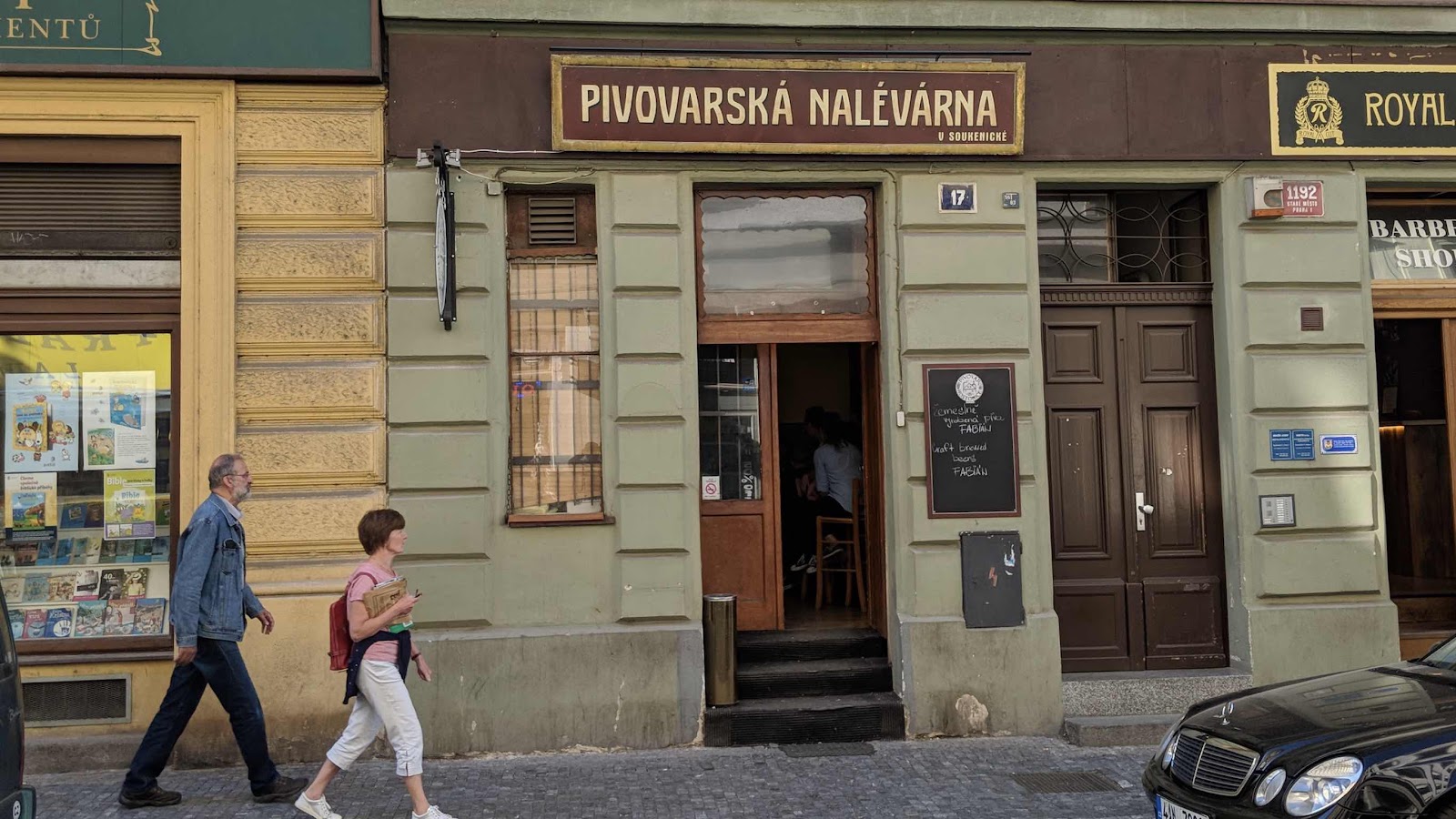 I started with the 10º which was as nice as I remembered. A full bodied, full flavored 4% abv beer. The price had gone up a bit since my last visit. It was now Kč 31 for a half liter — that is US$1.34 — outrageous! 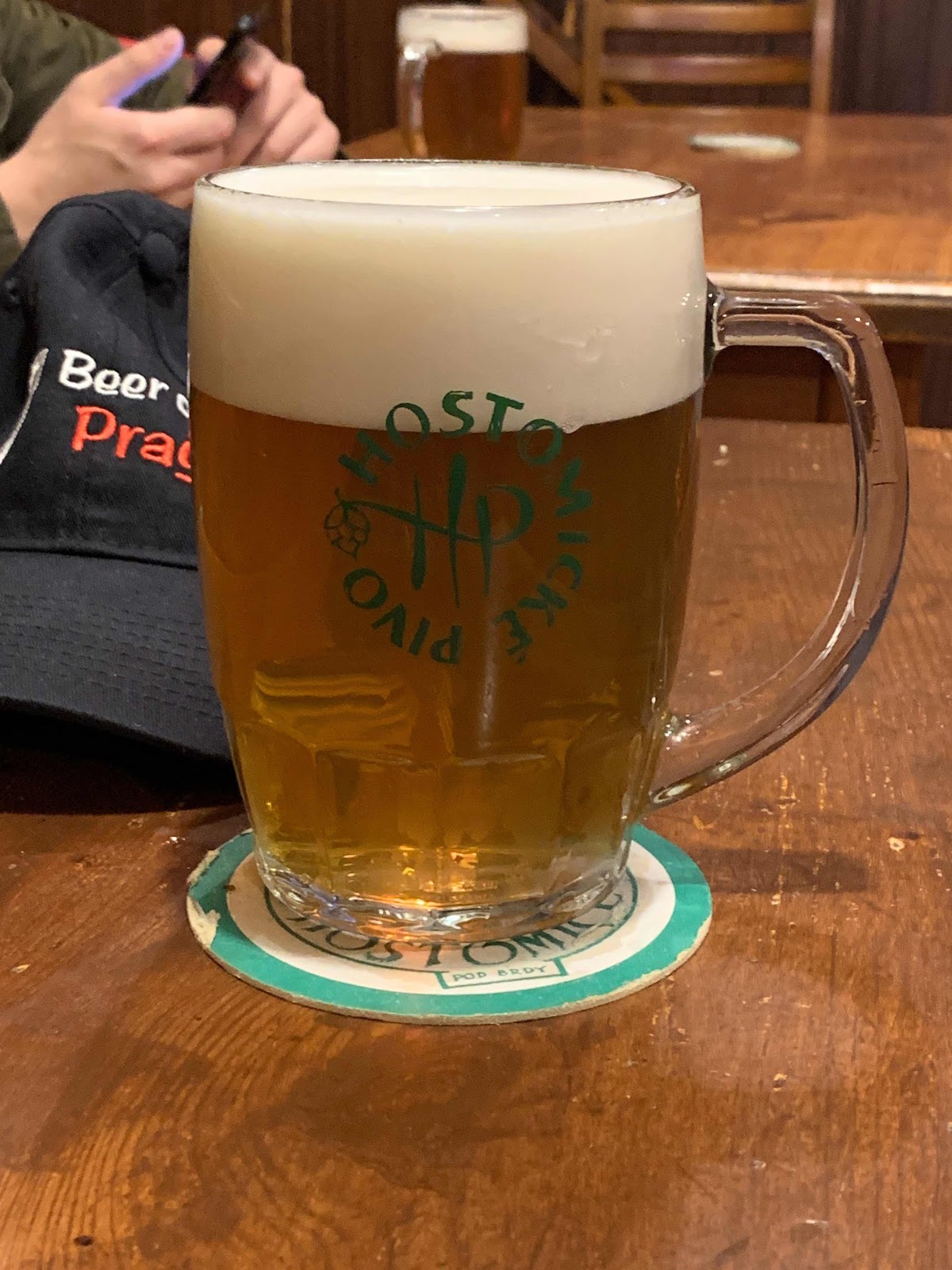 As good as I had remembered.
I had noticed sign on the way in... 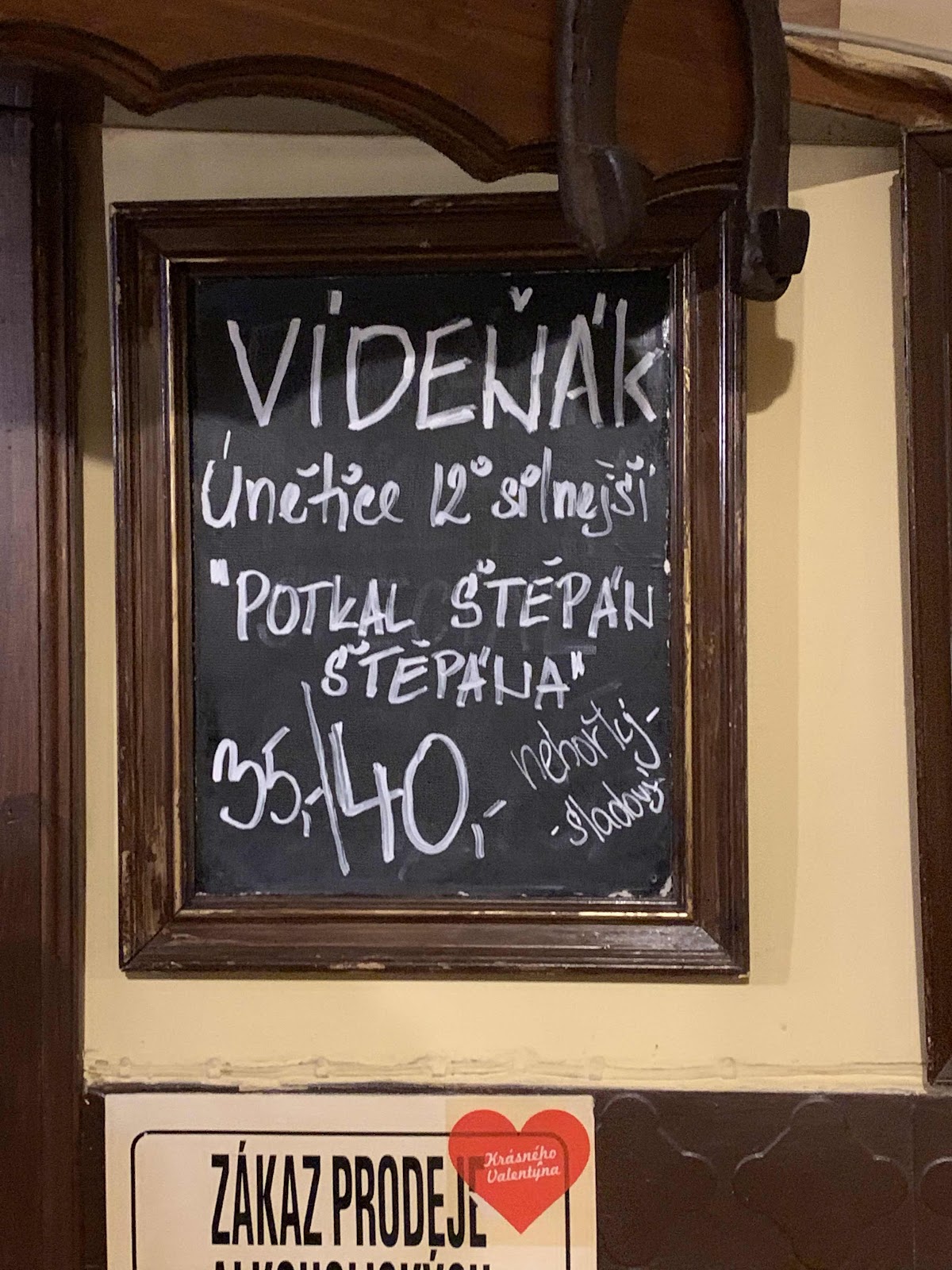 A Vienna Lager? Collaboration between Hostomice and Uněticé? That is like finding out your two favorite banjo players — Abigail Washburn and Bella Fleck — got married. Sign me up. 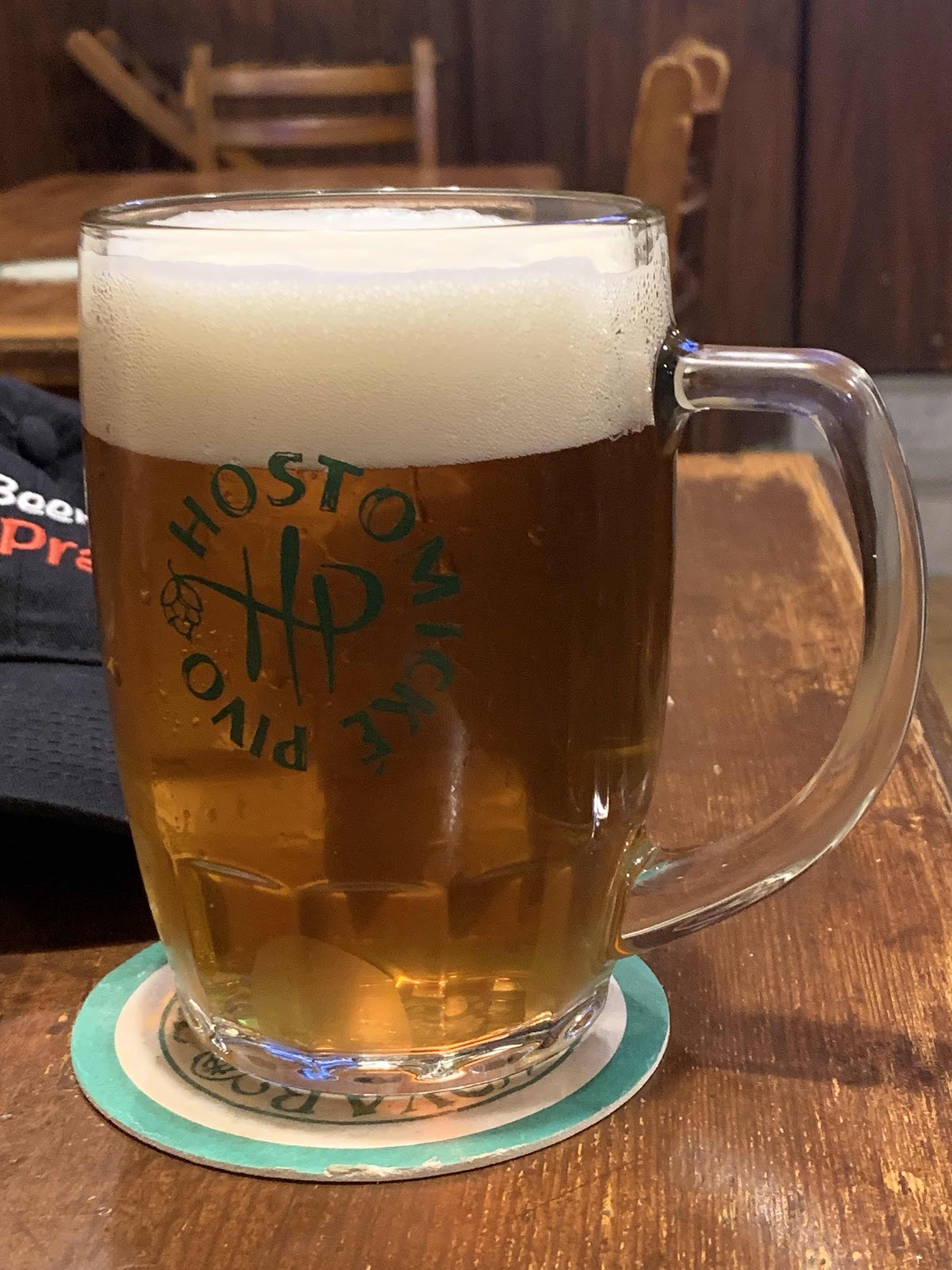 Last fall they had a special Vienna Lager that was brewed with 100% Vienna malt and lagered for like 6 months. That was an amazing beer. This beer was very good but not up that legendary beer.  It was getting late, so I put off having the 12º for another day and headed back to the hotel.
So much for my “I’ll take it easy today.”
Posted by The Mad Brewer at 2:17 AM