As is our tradition, we caught a 10:00am bus to Merkendorf, home of two good breweries, Wagner and Hummel. There is limited service to Merkendorf so the 10am bus is really the only one that works.

Half an hour later we are at Brauerei Wagner. 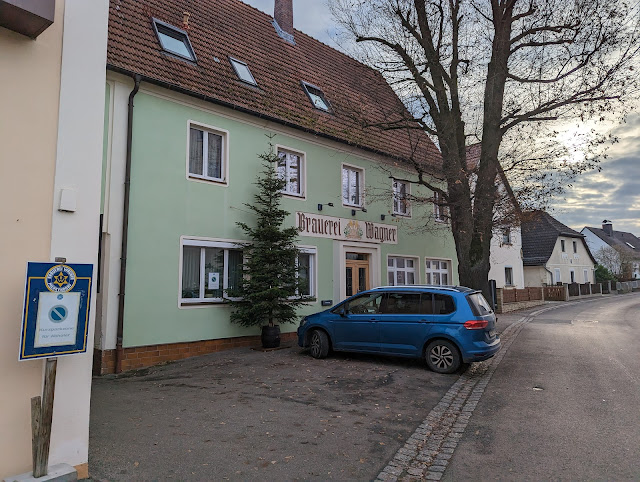 After a hiatus of three years the parade of beers at Brauerei Wagner, Merkendorf has returned. We passed on the Weizen so 8 beers to start. We missed it last year because a wind storm shut down long distance rail service and we lost the only day we could visit Merkendorf.

All were good. From left to right: Pale Bock, Dark Bock, Jubiläumsbier, Rotbier, Märzen, Pils, Festbier and Lagerbier.
Usually my favorites are the Pils and the Lagerbier, which was the case today, but the Märzen was much better than I remembered. All were good though. I chose the Pils and my next beer. 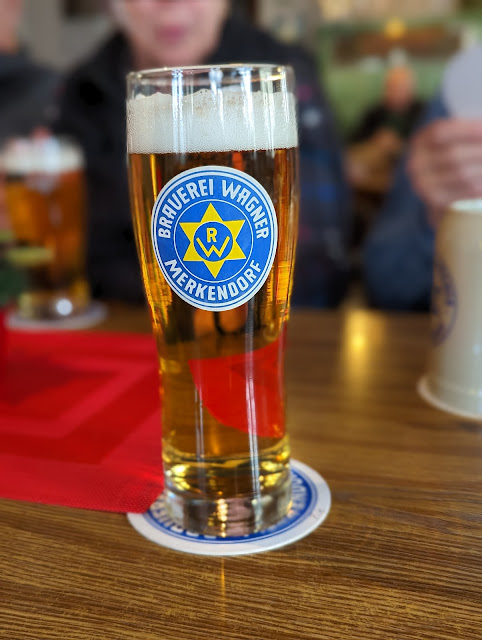 Kartoffelsuppe was on the menu and I am a sucker for that. This one was a bit different but tasty. 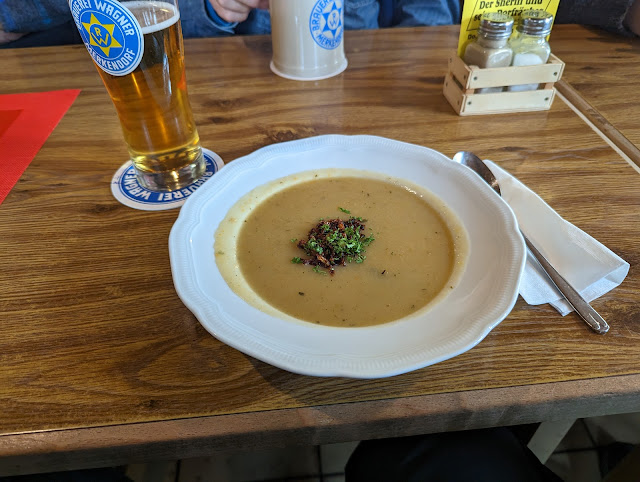 Lunch was a Schnitzel Sandwich -- €6 or an extra 50 cents for cheese and onions. 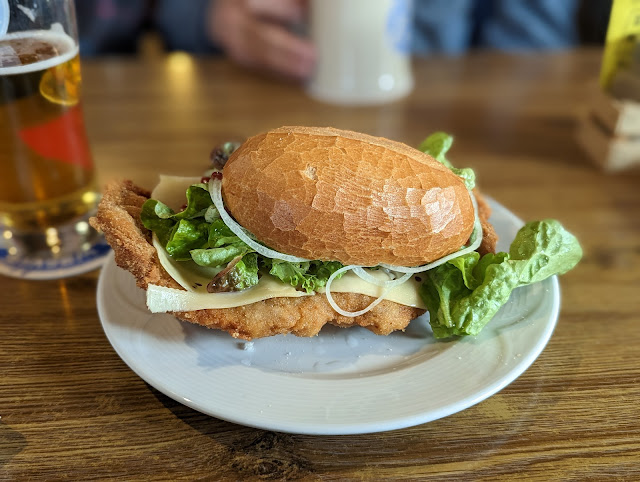 It was good. It would have been outstanding with a bit better bread. That was the secret ingredient at the old Cafe Abseits -- they had a special bread baked for them by a local baker.
I chose the Lagerbier for my next beer. In the background you can see somebody chose a Weizen so we touched all the Wagner bases... 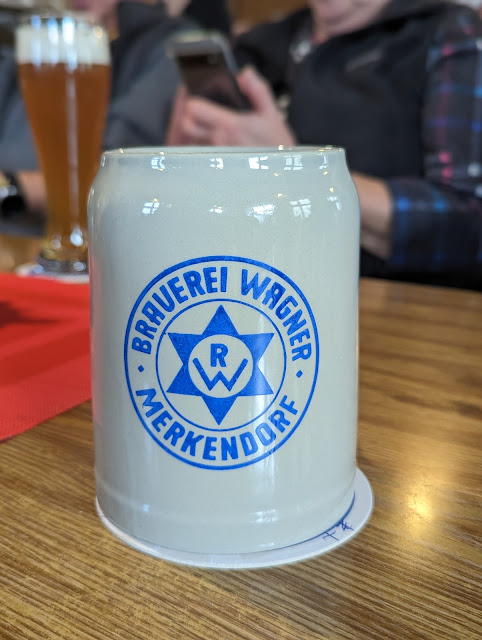 I love this brewery name signs over the bar. Just in case you forget where you are. 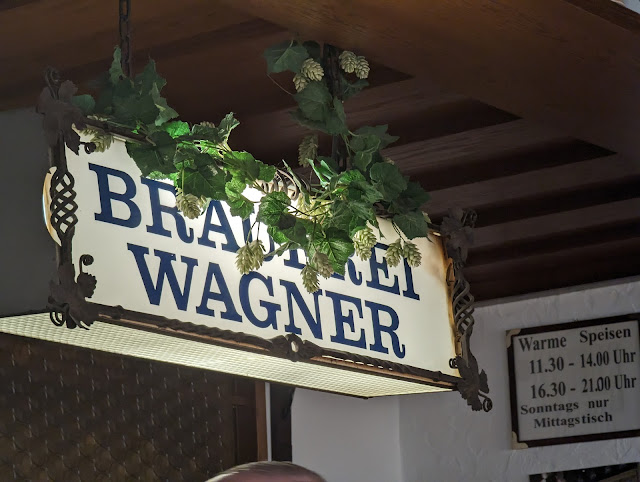 Their main room is just cozy, and quickly filled up with locals. We did get a few side looks. 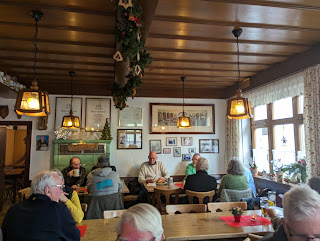 We then trekked back up the hill to Brauerei Hummel, which only had seven beers on tap. Luckily the dreaded Cowboy Schwarzbier was not one of them. Every day is a beer festival in Merkendorf. A village with just over 900 people has 16 locally brewed beers on tap. Should be in the book of records. 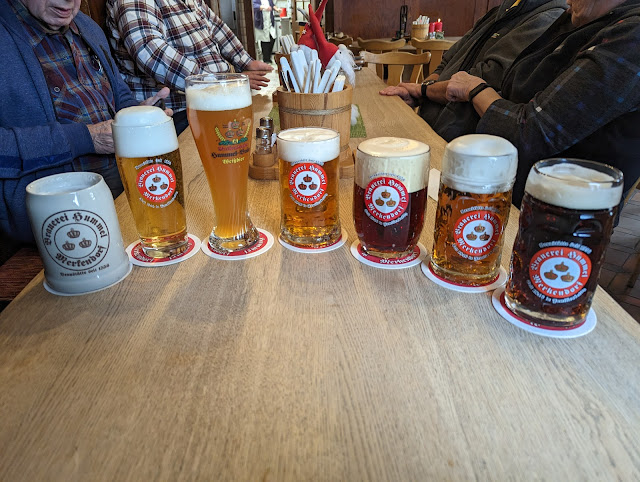 From left to right, Kellerbier, Pils, Weizen, Märzen, Bock, Jubiläumsbier, Dunkel. All were good but a few were on the edge of butteriness but were drinkable.
As is usual, the Kellerbier was my favorite. 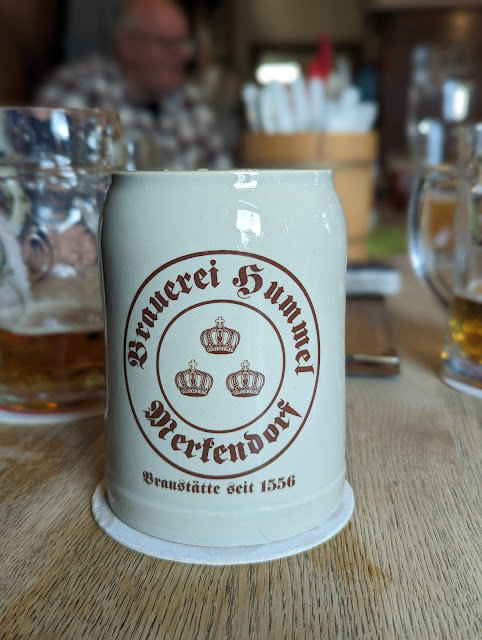 The kellerbier is gravity displeased and they have a special fridge for it. I want one of these in the worst way... 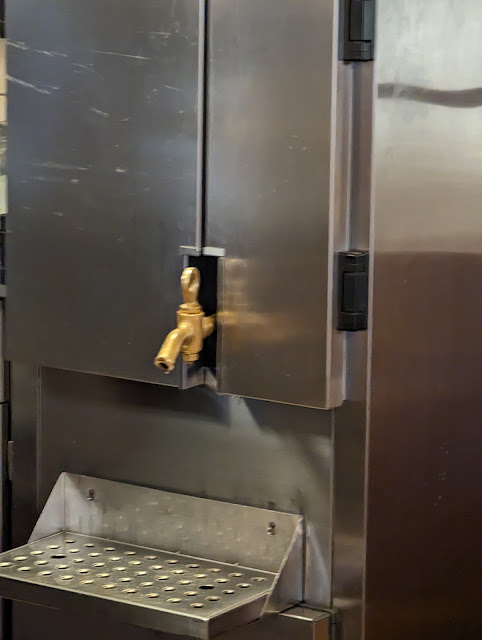 We hopped a bus back to Memmelsdorf where it dropped us off almost in front of Drei Kronen. 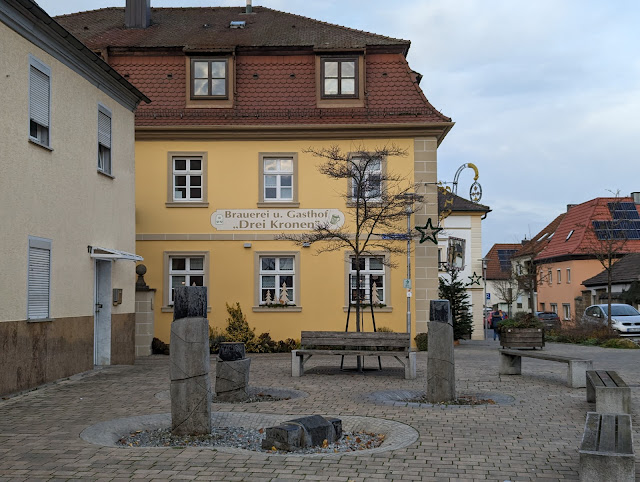 They had three beers on tap today Helle Lotte (wedding beer), Böckla, and 1457 Lager. All were well made and tasty. 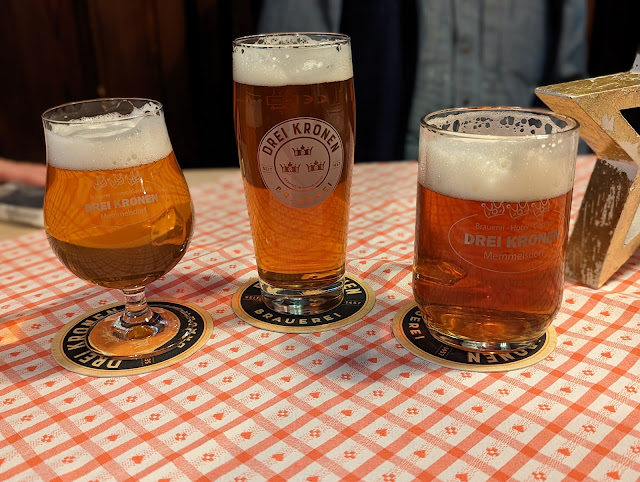 Turns out they also have an IPA in the bottle and my brother ordered one. 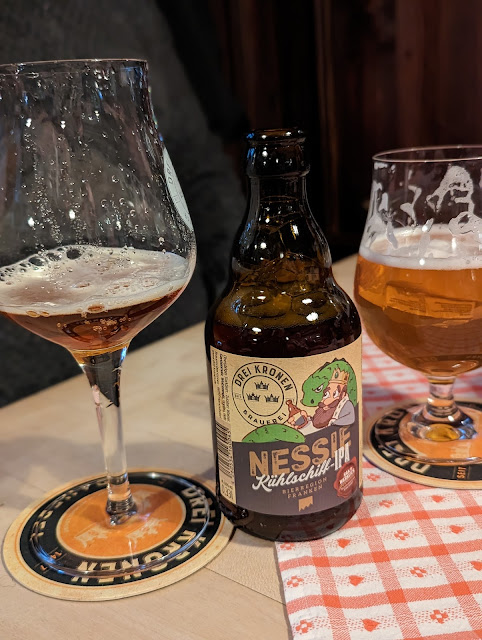 It was what you'd expect for a well made German IPA -- clean and crisp, a nice bitterness and some nice hop flavor.
It is hard for me to get used to sunset at 4pm -- it looked like it was quite late so we headed back to the bus stop and caught the next bus back to Bamberg.
It turns out the same bus continued on the Wunderberg (after a short rest for the driver) and we had purchased day tickets so stayed on the bus and check out Brauerei Keesmann 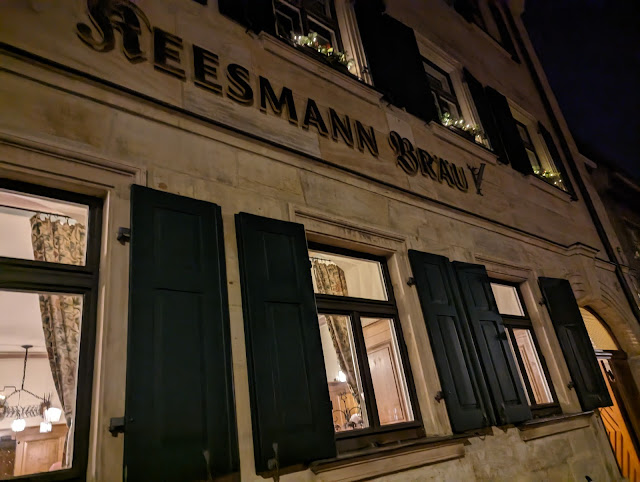 We had already inquired about dinner reservations a couple of weeks ago and we told no chance, but we thought we might have a quick bock int he Schwemme. 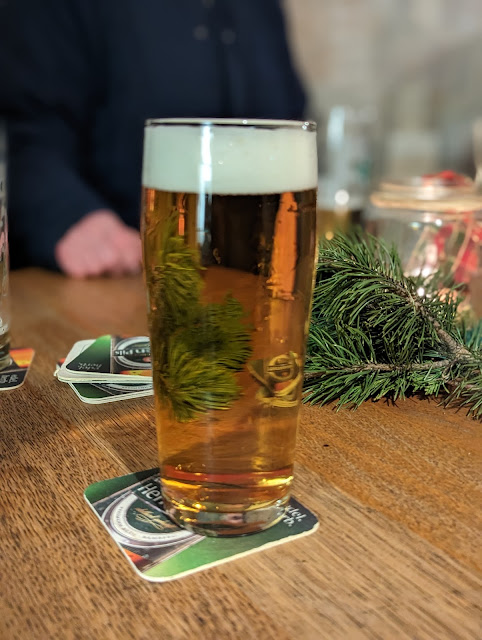 It turns out the Schwemme was also fu ll so we were relegated to the smoker stations outside. By my phone it as 31ºF so the bock was consumed a bit faster than maybe optimal. As expected it was very good and by far the best bock we'd had so far.
We walked across the screen to Mahrs Bräu and they had a table for us, sort of. They have covered the entire courtyard under canvas, making it one huge tent. They had a couple of heaters trying their best but it still was fairly chilly. But we where hungry so we sat down.
I ordered the U. There is a bit of a controversy raging on the internet about the U. I found it be an enjoyable beer, with no flaws, but a shadow of its former greatness. 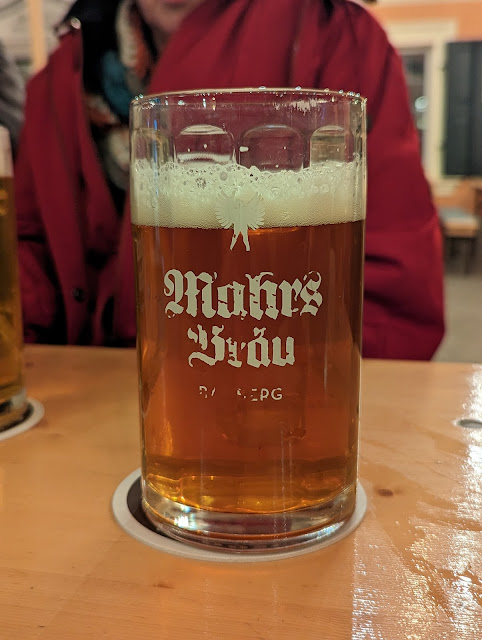 It really reminded me more of an unfiltered Helles. It used to be a bit more bitter and much more "lively." I'm not really sure how to describe the latter, bit it used to have it and now it doesn't. But if you hadn't tasted it before (or for a long time) you might wonder what the controversy was because on its own, it is a good beer.
Somebody else ordered the bock. 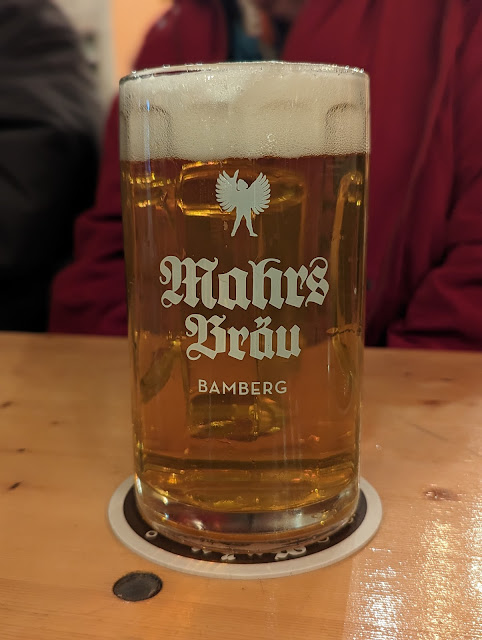 I found it to be too sweet -- I'm glad I didn't order one because I probably wouldn't finish one.
For dinner I had the Treberschnitzel -- a Schnitzel breaded with spent grains. It was good but not as good as the ones we used to get at Andy Gänsteller's place in Strassgiech. 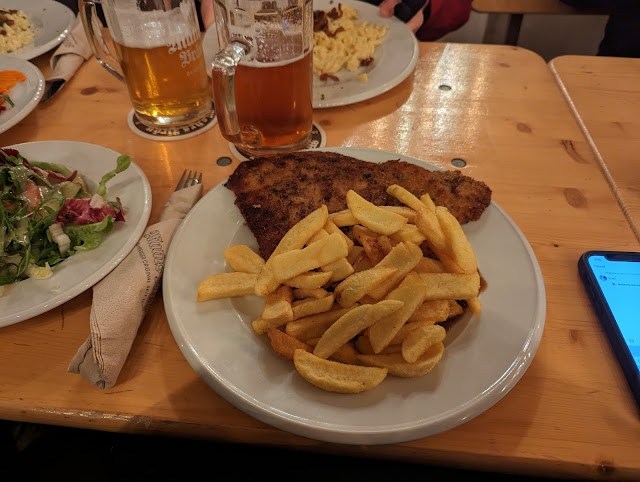 One beer was enough and we decided to head home. On the way we passed a pub (Undisclosed Location #1) were I popped in for a Spezial U. They also have Sonne (Bischberg) Helles and Keesmann Herren Pils on draft, so something for everybody. If you know it, good for you but remember the first rule. If you don't know it, come drink with me and I'll take you there... 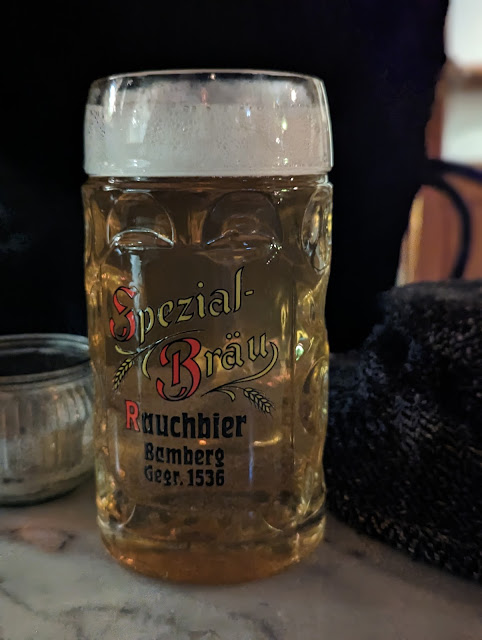 Further along I came to Undisclosed Location #2. I have head recently that they will have to close next year for some reason which wasn't; clear to me. They have a nice bottle selection and on the weekends they usually have a gravity feed barrel on the bar. Today's was the Kellerbier from Eichhorn in Dörfleins. A very nice beer.
It was dark so I apologize 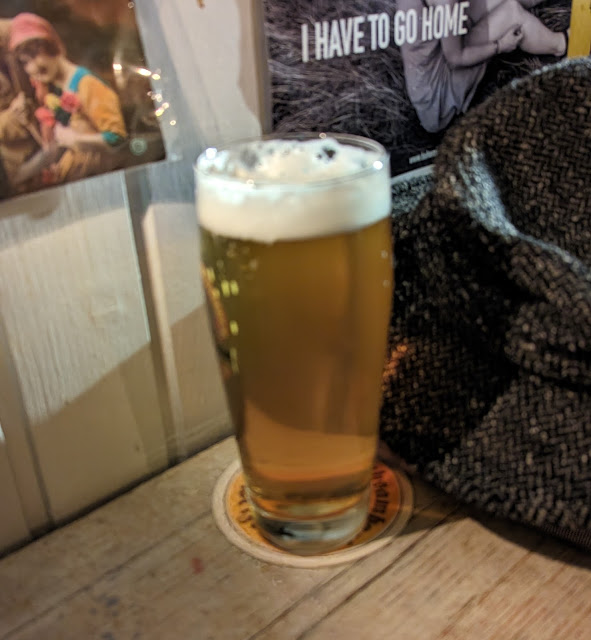 By the time we got back to Spezial they had closed the front doors (but we have a key) but there were still people in the pub. We might have been able to finagle a last beer, but I called it a night.

i may need to confirm the identity of undisclosed location 1&2 prior to my visit next year - presume you have a beer guide for bamberg and surrounds?