I see the last post I did was "Last Day in Prague" -- I guess this blog is mostly about Prague these days :) 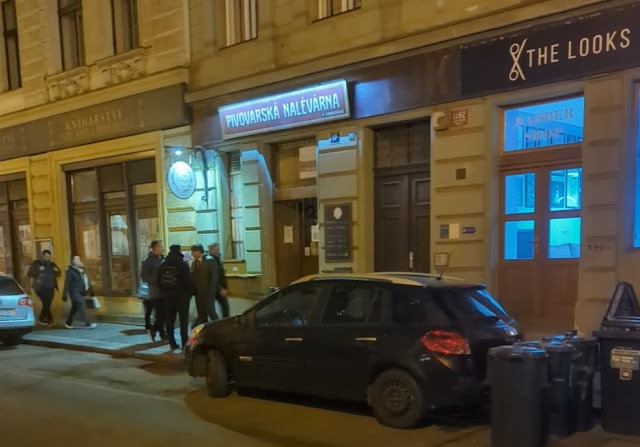 I often start with the 10º but this time I jumped right in to the Hostomice Fabian 12⁰. Worth the hassle of getting here... 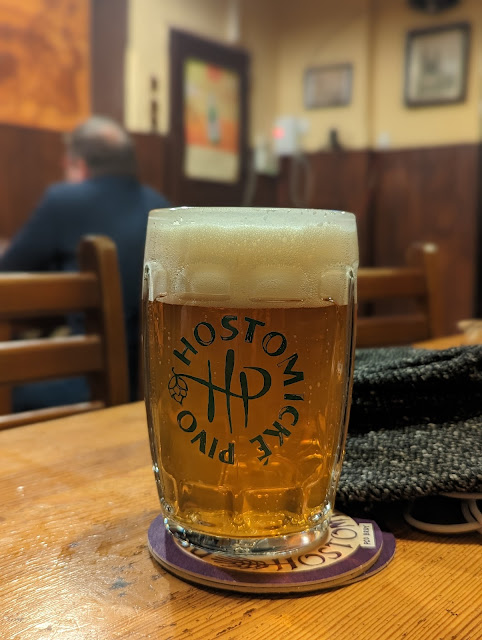 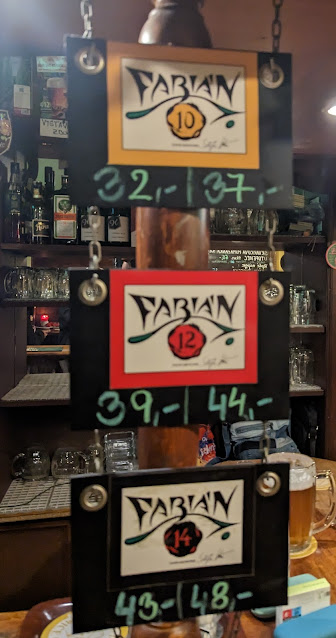 The most expensive on at Kč 48 works out to be just over US$2 -- a great deal.
They also have an occasional fourth beer. I saw the the Czech word for "hops" in the name. Hmmm. 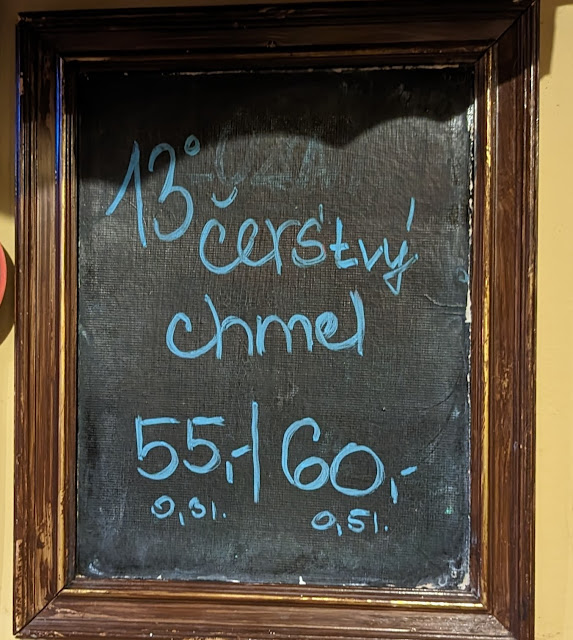 A little google translate and it turns out it is a "Fresh hop" beer -- sign me up! 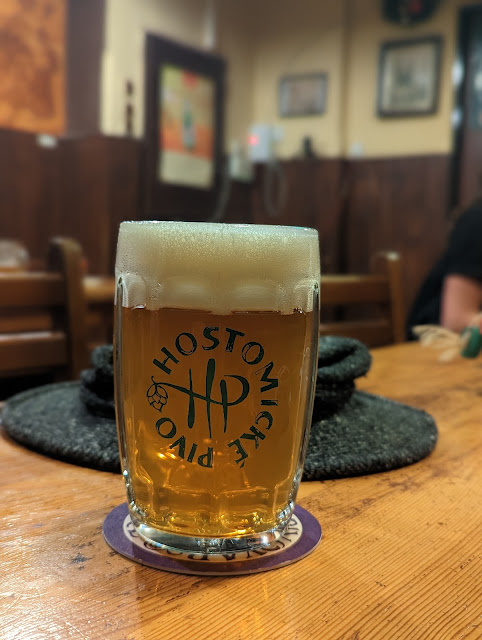 Oh boy was this good. Lots of hop flavor up front with a clean, crisp finish. And sadly, today was the last day as they put on a 16º beer tomorrow -- A Christmas beer (or Advent beer as they are sometimes called here). I guess I'll have to come back.
I ordered some Hermelín, a camembert style cheese that has be marinated in oil with onions and peppers. It is a common bar snack here as it doesn't require refrigeration. And another Fresh Hop 13º to go with it. 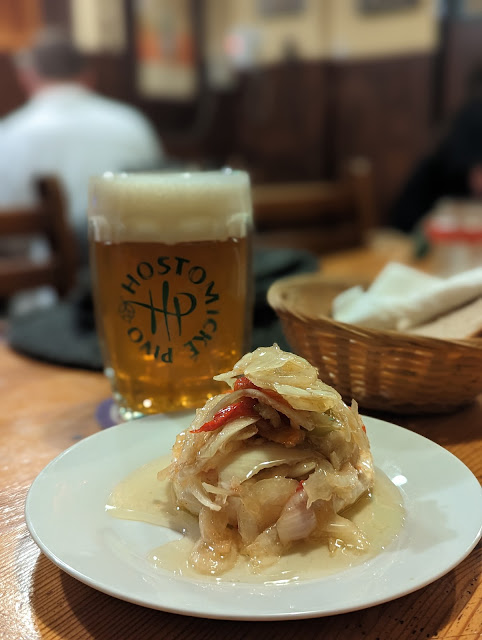 I could have stayed for a another beer or three but decided to head back towards my hotel. Along the way I stuck my head into Minirest to see what they had on tap. I saw they had the Black Jack Stout, a collaboration between the local Sibeeria brewery and Budvar. I had read about it and I hoped I run across it. 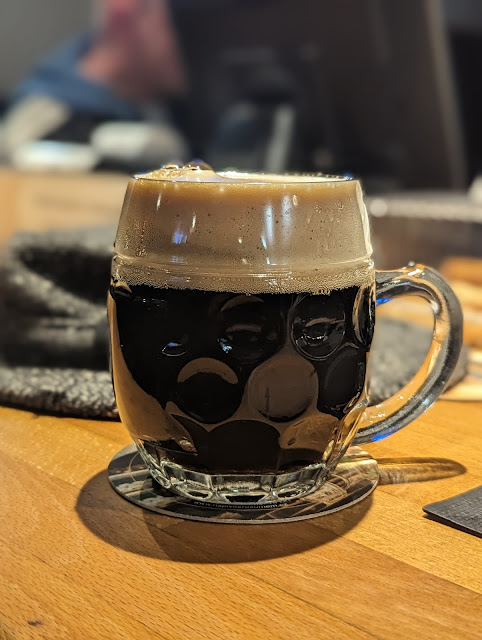 They call it an "Imperial Baltic Porter" -- 8% abv and 46 IBUs.  What ever they call it, it was delicious. Lots of chocolate notes, I'd be curious to see if there was actual cocoa in the beer or if that was just from Chocolate Malt. Definitely one I'll have again, if I can.
Minirest has a fairly eclectic tap list for the kind of bar it is. The Hrádek beers are well made but I don't find them all that interesting. But there is usually something else where trying. 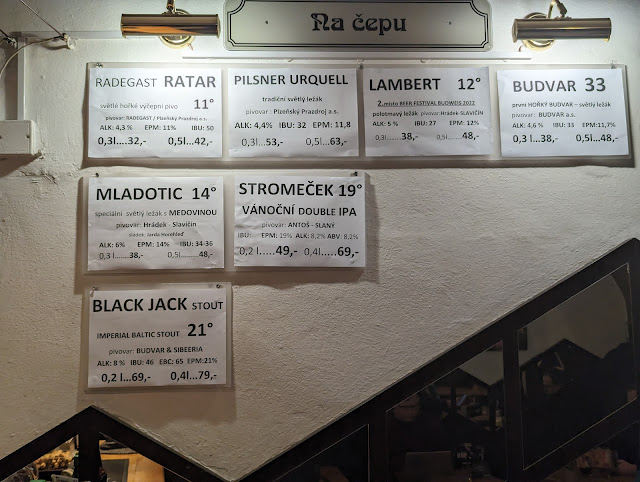 They also had a poster for a Rauchbier Fest this Saturday at a BBQ restaurant. 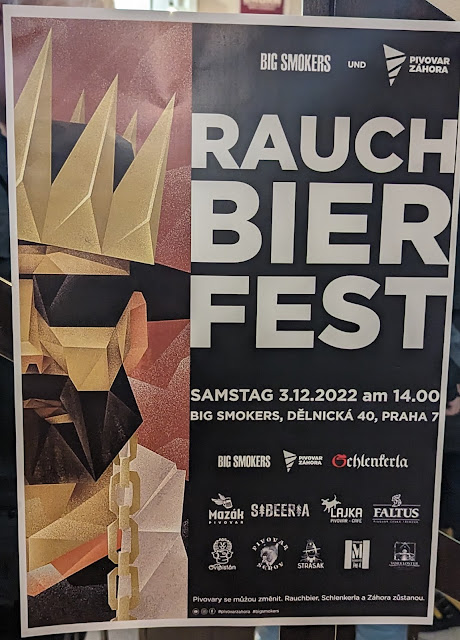 When I first came across it, it didn't see Schlenkerla mentioned.  If we weren't headed to Bamberg next I might check it out. Who knows...

With that, jet lag was really kicking in so I called it a night.