We started off the day at the new Automat Matuška, right at the Hradčanská tram and Metro stop. 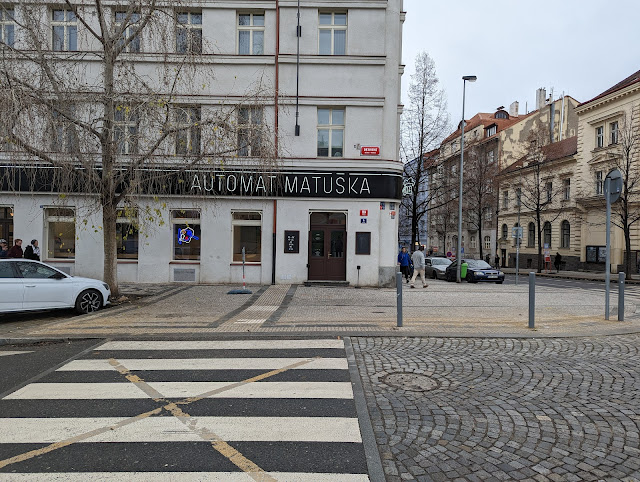 .
During the week they open at 11am but on weekends it is noon and we were too early. Not to worry, I had. plan B: Not too far away is Dejvická Nádražka, a pub at the Dejvice train station. It is a very old school station pub. 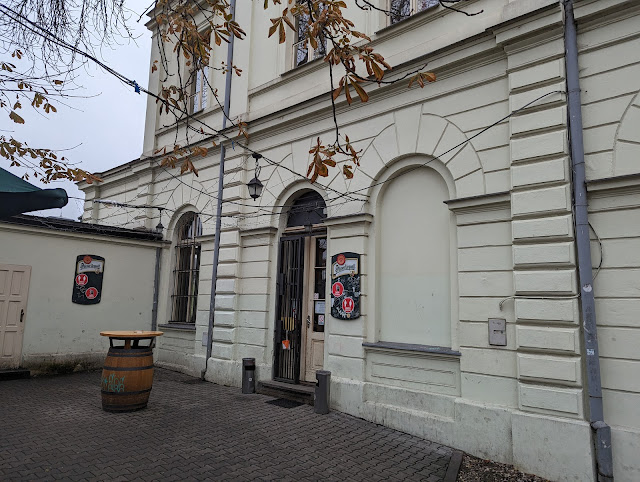 They serve two beers but one is really the reason to come here, the Staropramen Smichov 11º. Not only is the Staropramen brewery close by, it is probably the cheapest beer in town at Kč 29.5 for a half liter. That is about US$1.28 at today's exchange rates. 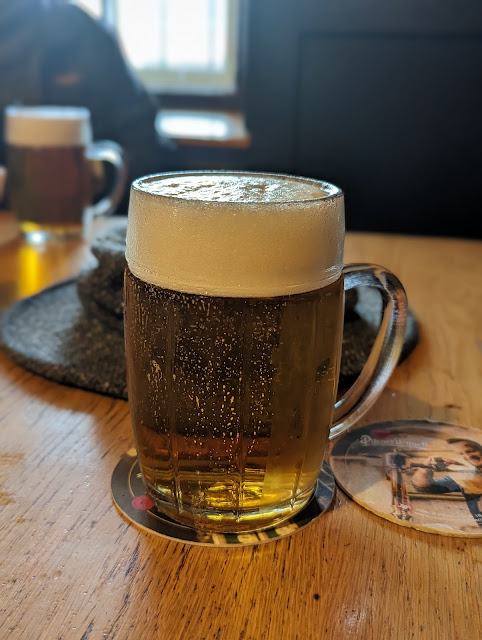 It is not best beer of the trip but far from the worst. Eminently enjoyable for one or two mugs. Most of the beers we'd have the rest of the day would be two times that, at least.
We downed our Smichov 11º and headed back to Automat Matruška for the house Dvanáctka (12º) Světlý Ležák. As I sort of expected, it was served in. a .4L glass. 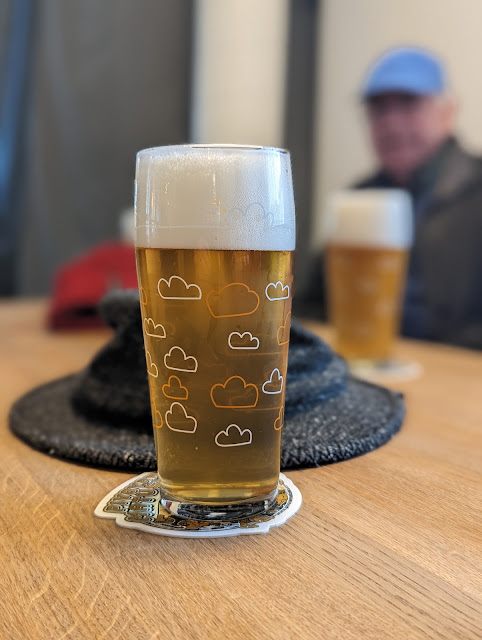 It was.a nice beer and I could have had another if we'd had the time. They had 10 beers on tap -- these are most of the beer flavored beers.

There was another board that at first I thought was other drinks, Grape Ale, Strawberry Milkshake but it turns out they had abv% listings, so they must have been beers... 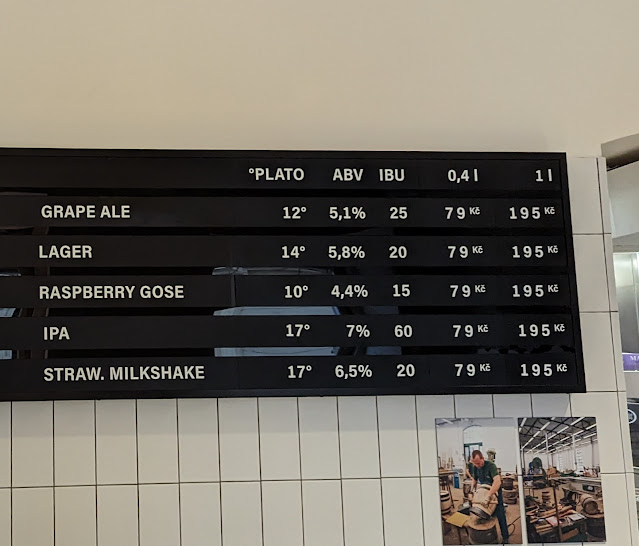 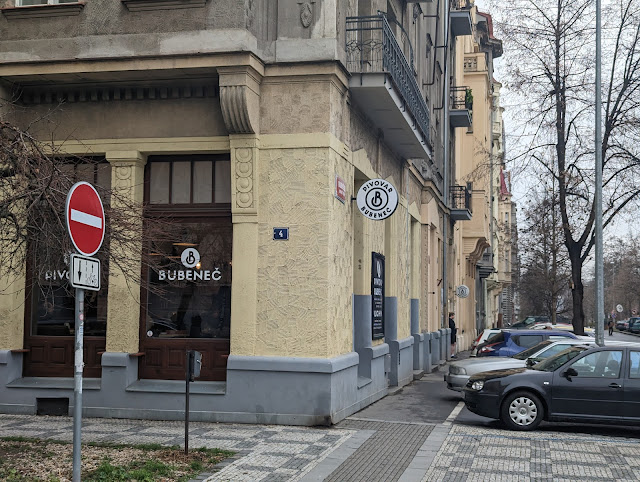 I almost always start off with the Bubeneč 11º and I wasn't disappointed. Looking at the beer board, I saw they still had the Ovesný Leźák. I head read about this earlier -- an Oat Lager. 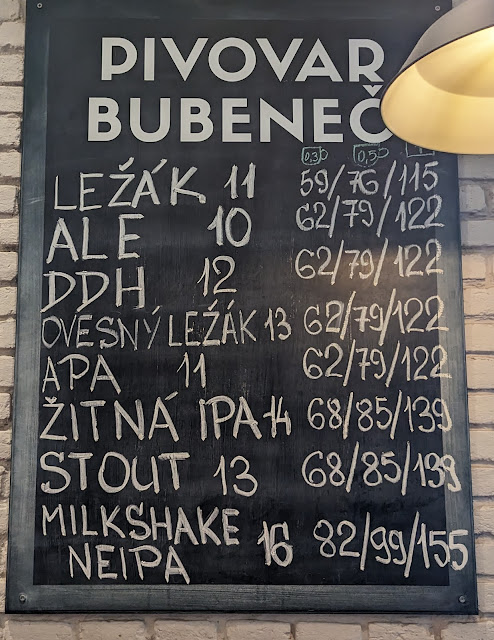 It was lunch time so I ordered the Goulash. At first I thought the white stiff was cheese and that seemed unusual but it was grated horseradish. 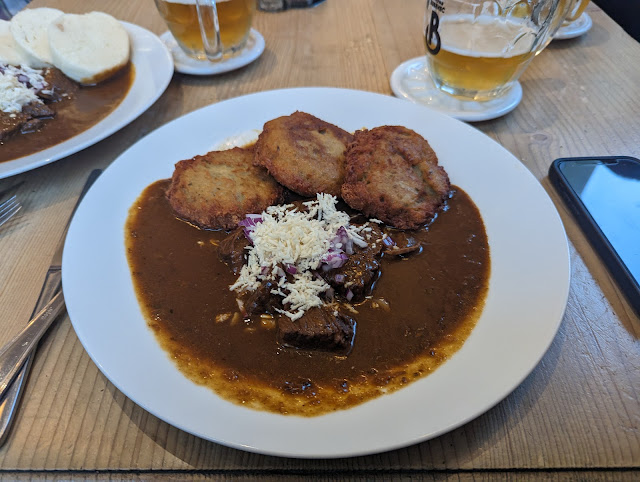 And of course and "Oves" to go with it. There definitely were some different flavors in there. It was good but I don't think I could drink more than a couple. 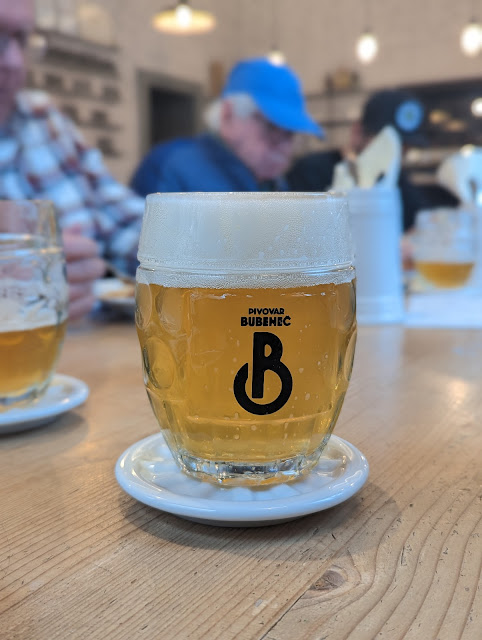 Somebody at the table had the DDH 12º (Double Dry Hopped) and it too was a very nice beer. Lots of hop flavor but still clean and dry in the finish.
We said goodbye and walked over to Pivní Jistota. I've been here 3 times before and always had a good time and good beer.
º
I ordered the house IPL 12º -- at less than two Staropramens it was a good deal. Tasty too. 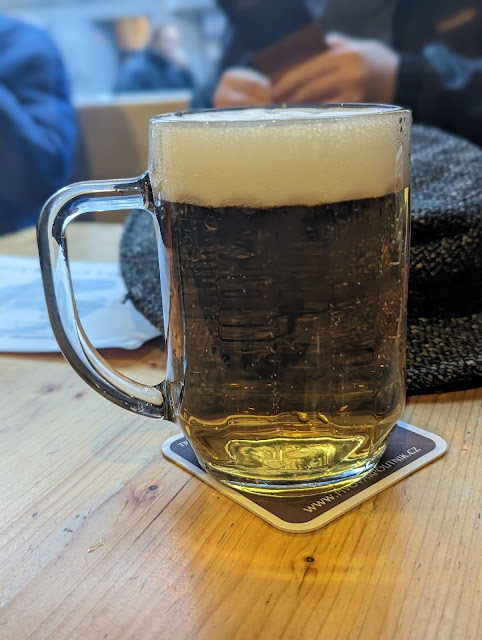 Unlike a lot of places, the tap list wasn't overwhelmed by IPAs and pastry stouts. 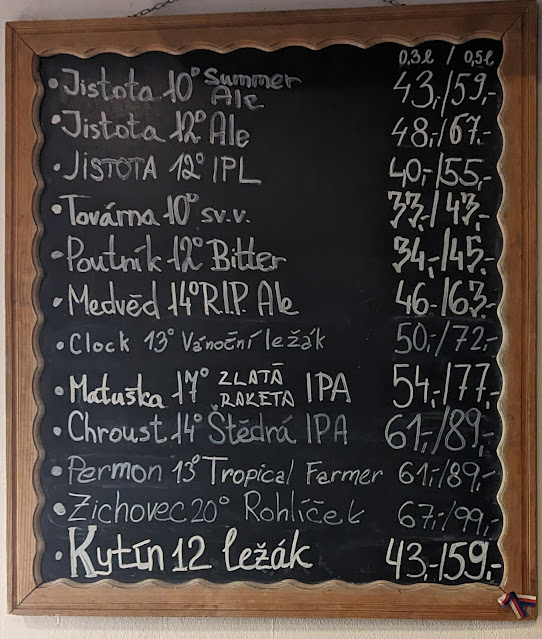 It was.a tough decision but we decided to move on after just one. Getting dark at 4pm sort of confuses the time sense and it seemed really late.
Not far away is Budvarka, a Budweiser Budvar restaurant 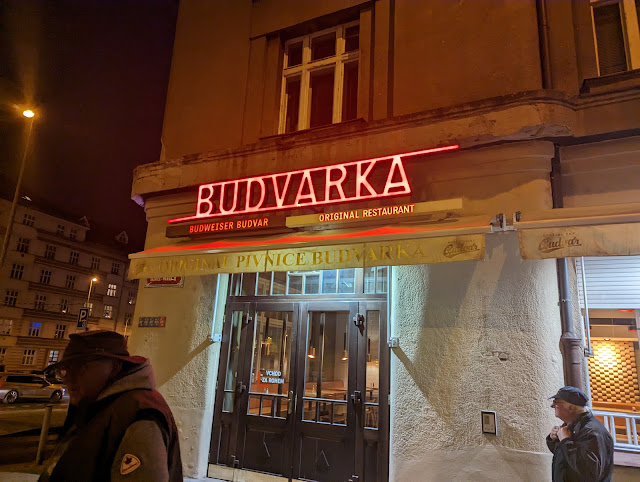 They have the Kvasnicový so I ordered one -- it is a favortite. 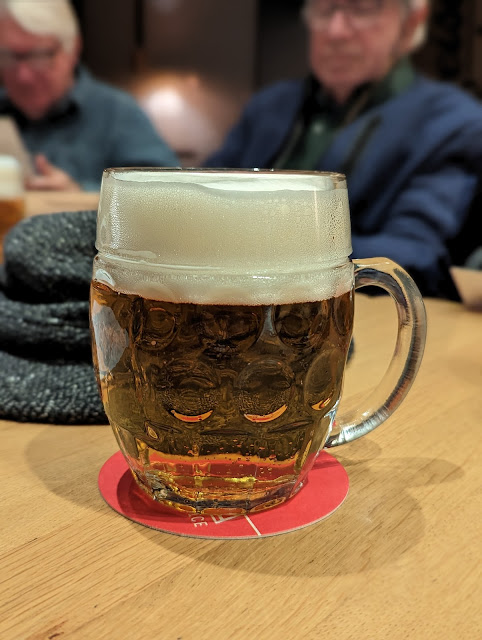 The taps at Budvarka. I asked about the Redix and the man said it was the original Budvar but upon further research it is a different beer.
Added: A knowledgeable reader told me the Redix is made with red malt and is 10º. So probably they had the original on but didn't change the tap handle.  Sorry for the confusion

I ordered the Redix and it tasted like how I remember the original but it has been at least 3 years since I had one so it hard to tell. It was a tasty beer in any case, and was served in .5l mugs. 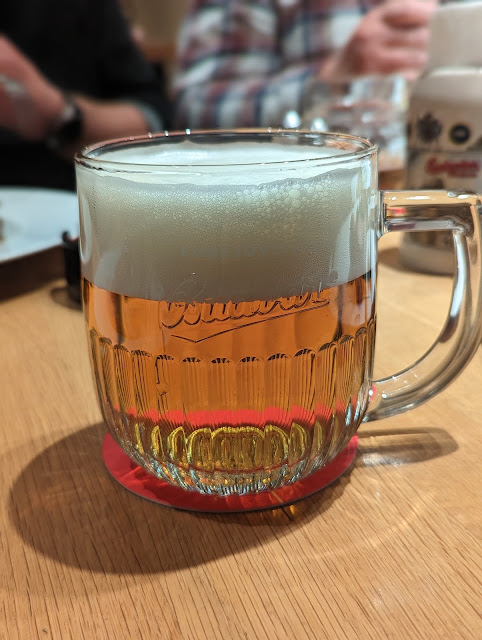 After that, we headed back to the hotel but a few of us "accidentally" got off the tram a stop early and had to walk by Pivovarská Nalévárna. It wold be rude not to stop in. So we did.
I started off with the Hostomice Fabian 12º. I usually am torn between the 10º and 12º but I think I've settled on the 12º as my favorite. 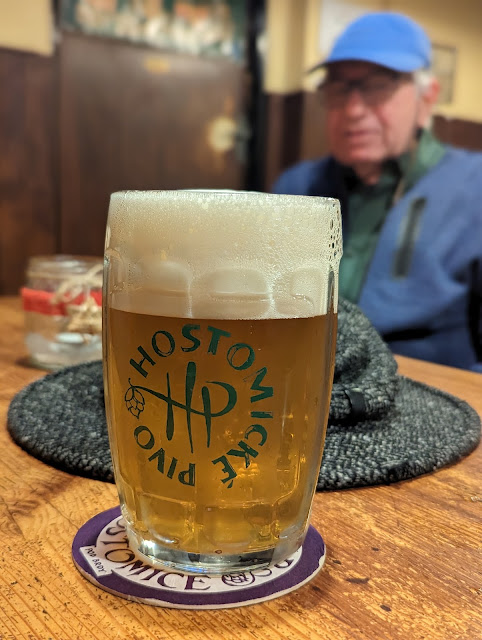 The 16º "bock" was still on so I thought I support the effort and have one. 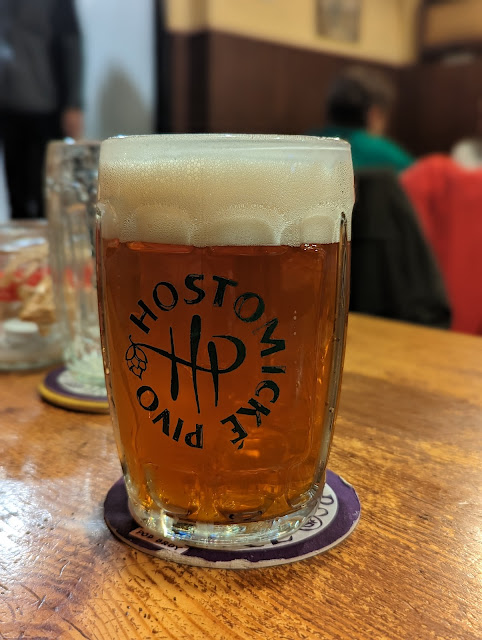 As is usual, it did not disappoint. This would not be out of place in Bamberg doing bock season (better than many) and could be deadly as it goes down easily. But I managed to limit myself to one and stumbled back to the hotel.

You’re slacking, there are fellow travelers in your photos, keep it up.