We had a bit of a chaotic end to an otherwise good day. But no beer was spilled so all is good. 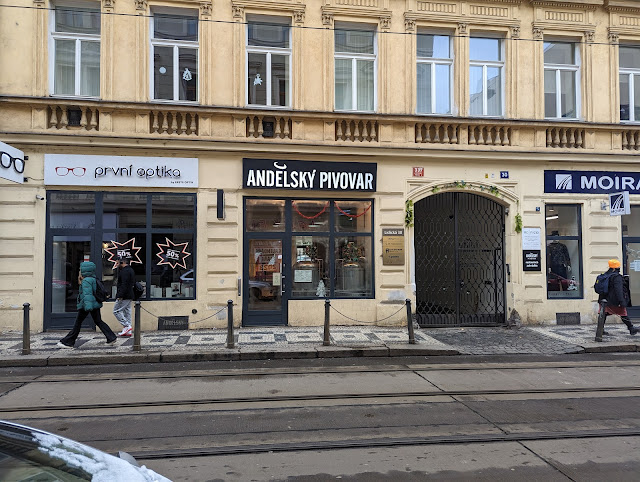 The have four beers on tap. The house beer is the Anděl 11º which is my favorite, but many of my local friends prefer the IPA 14º. It is a very clean West Coast style IPA and I can see why it would attract lager drinkers. 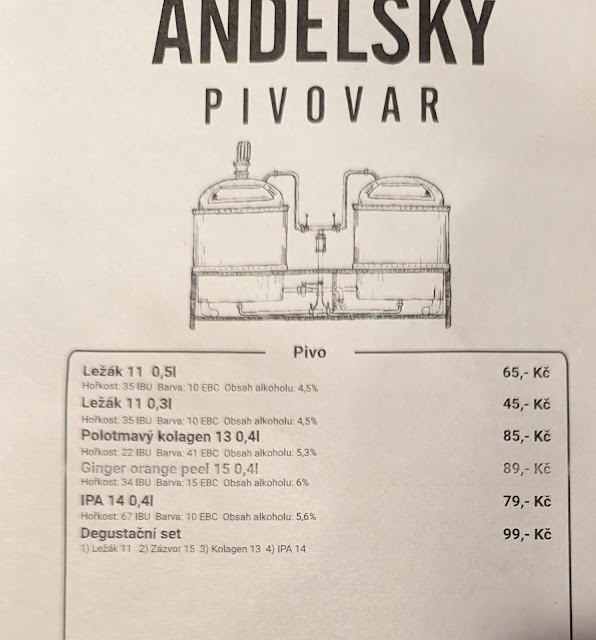 I had the house 11º probably not surprising anybody. 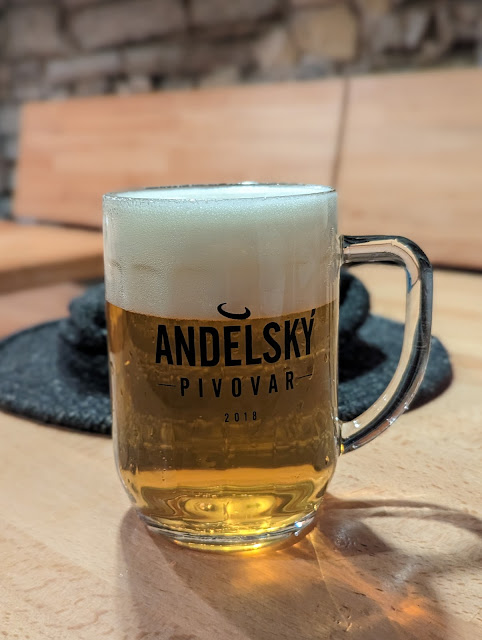 Not the best beer I've had on the trip but certainly in the upper echelons.
Their amber lager (Polotmavý) had collagen added. I am not sure why, but brewers often but the strangest things in their beers. I didn't really notice anything special but if I get compliments on my hair and skin in the next few days I'll credit the beer. 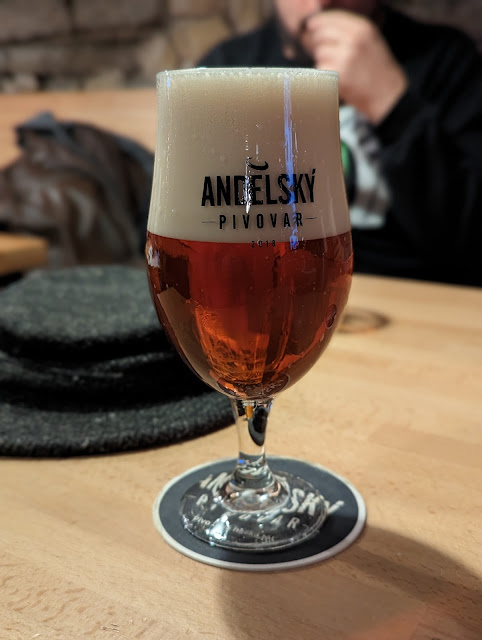 We weren't initially thinking of eating but they had something intestine on the menu -- a Pulled Duck bowl. There was shredded duck meat, red cabbage and fried onions served with the strange oblong potato dumplings. It was very good. 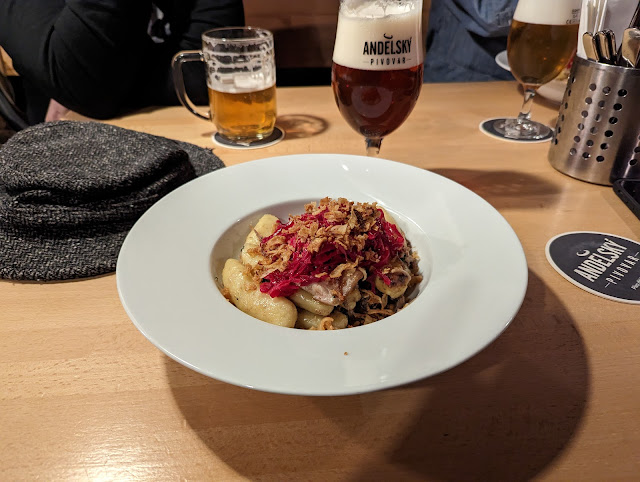 We walked over a couple of blocks to another nice place Beertime.pub. They have 14 beers on tap and there usually is sometime for every taste.

I had the Kamenice 11º. I like the beers from Kamenice but I usually prefer the 10º or the 12º as they are a bit happier. The 11º has more "malt forward" than the others. But it is still a nice beer. 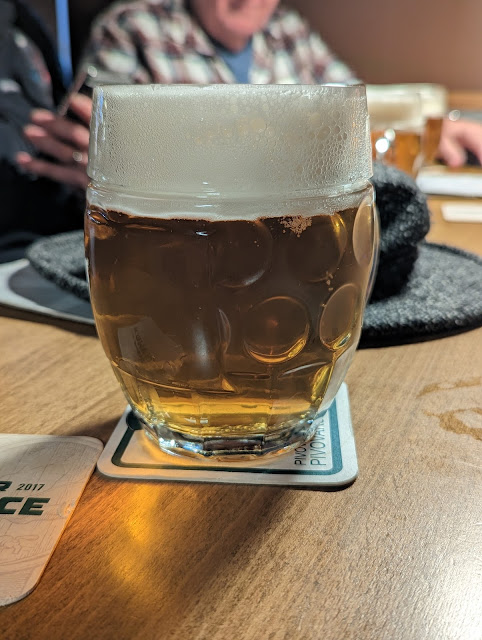 The rest of the group caught up with us (they were doing sightseeing things) and since they hadn't eaten the ordered some food and we ordered another beer. This is the Sibeeria (a local Prague brewery connected to the BeerGeek pub) Grave Pack Dark Rye Lager 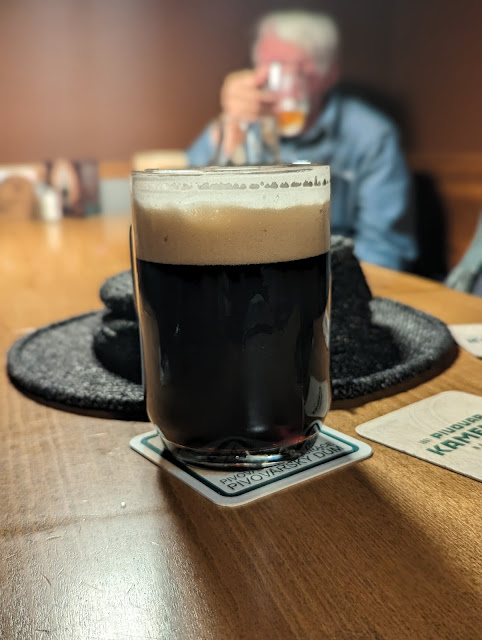 This was a very interesting beer.  Full of flavor but only 3.9% abv A nice blend of dark malts, some spiciness from the rye and hops. I would drink this regularly.
A couple of doors down from BeerTime is the original location of The House. I had heard that they had a variety of beers and the one I visited on Thursday didn't, so I thought I'd stick my head in the door and check out this one. 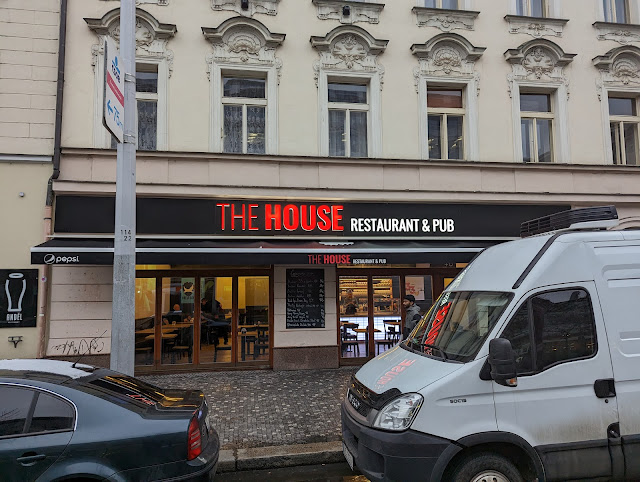 Turns out they had a half dozen beers from Pivovar Antoš, which while not one of my favorites, the beers I have tasted from them were solid. So maybe another time.
On my way out I notice the board so I didn't even have to go in... 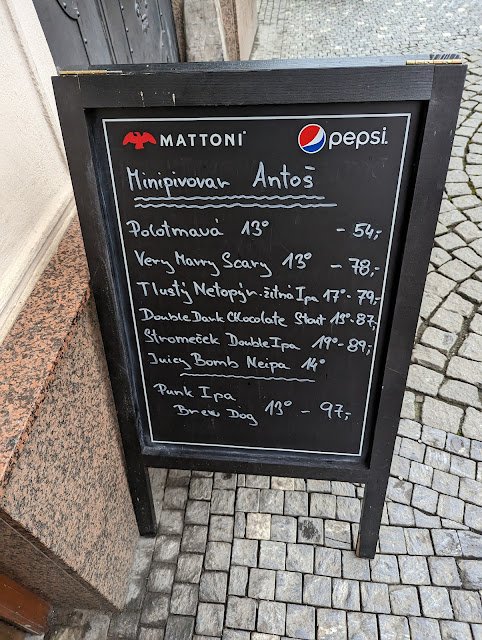 We hopped on a tram up to the Letna district and walked a couple of blocks to Hangár.  There were a few places we could have stopped along the way, but we wanted to get a bit closer to home base as the final member of our group was arriving soon. 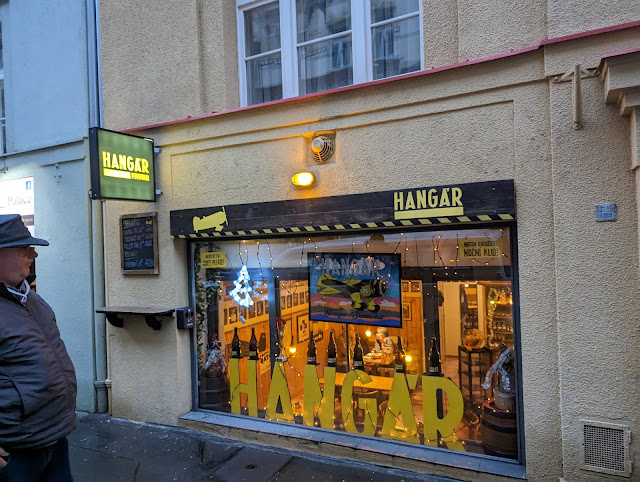 It started out as a pub (and still is) but they now contract brew their own beers. 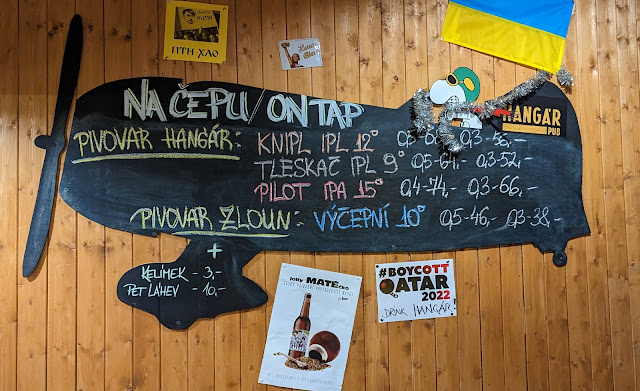 I am a sucker for IPLs (under whatever name you want to call them) so I ordered the Knipl 12º, It did not disappoint. 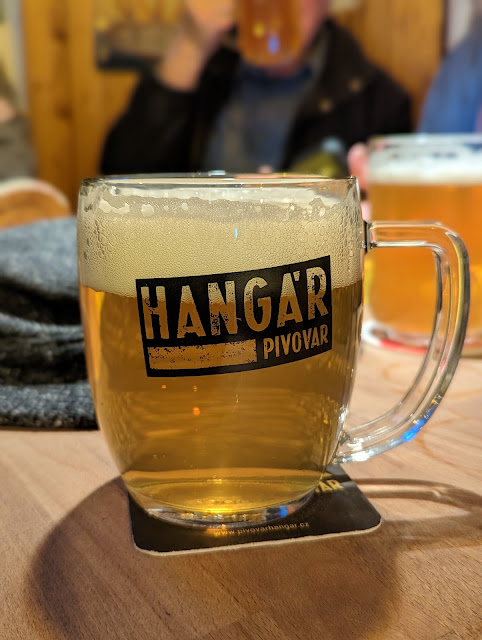 We were having good time and so we all ordered another beer. I ordered the ZLoun 10º. I believe in a previous visit they said this was were their house beers were brewed. It was also a solid beer.
About this time I got a text from our last member that his plain had landed. The best place to meet would be the Hostomice taproom but our advance scout had said all the tables were reserved. But, one wasn't received until 7:30pm so that gave us time for a quick beer. I had my favorite, the Fabian 12º 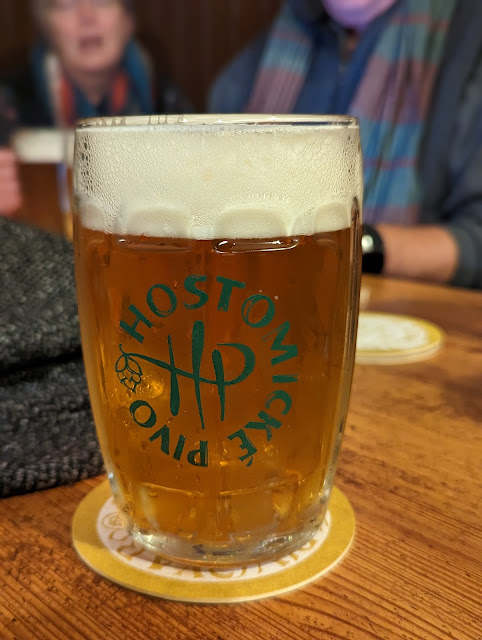 Our wayward traveler showed up (actually my youngest brother) and he had a quick beer and we headed out to find some food. We stopped at the new Prague Beer Museum pub on Dlouhà. The advertise 30 beers on draft but they had a temporary list of 15 and even a couple of those were dry.  The manager said he called their sister pub off of Old Town Square and they had room and the beers we wanted. So we trekked down there but one side or the other had lied because the beer we wanted (Úněticke) was also out. Hmmm.
So we ended up at Fat Cat Beerhouse, which doesn't have a great list but it was good enough. I had the Pardubice Premium 12º (listed as "Bitter 12º" on the menu) with my Reuben sandwich. Both were good. 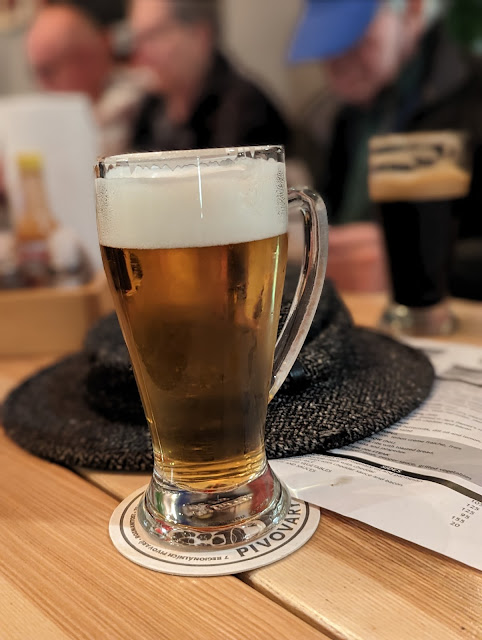 At that, we called it night.