The TL;DR version of our day: We walked around Düsseldorf and drank beer. You want more?
We convened at Uerige to make sure the beer had not changed overnight. It hadn't. This was actually my third beer: the lens was fogged on the first one and a forgot to take a picture of the second one. Trust me, they looked the same. 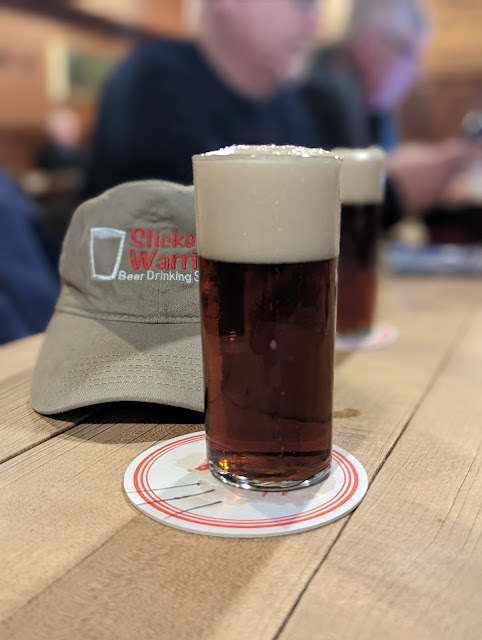 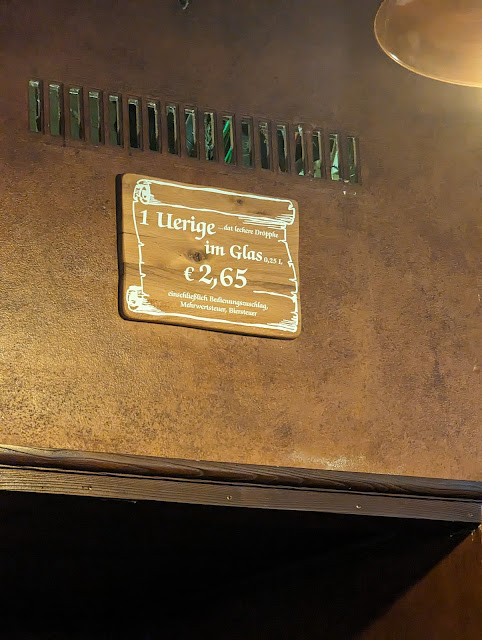 In past years, on Tuesday they had Königsberger Klopse for lunch but that is not available in the winter. So I had goulash for lunch. 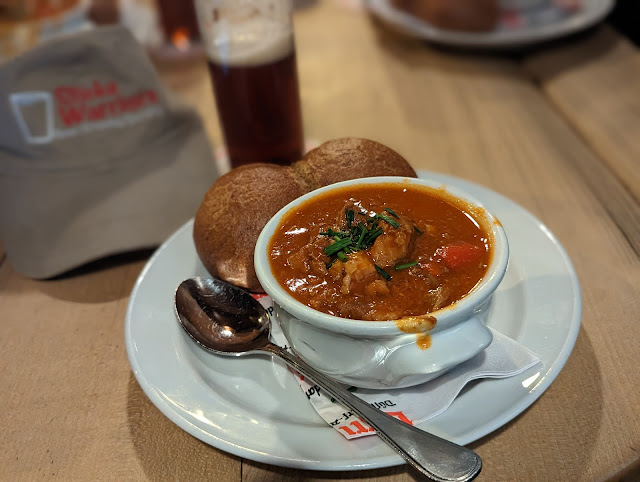 Unlike some that I had in Bamberg (and Prague) this had some paprika and peppers in it. The best goulash of the trip.
A few more beers and then we decided to adjourn for a bit a reconvene at Schlüssel. One change from last year (and before) is many places are closed a couple days a week and/or open later in the day. Uerige and Sclüssel are unchanged but for example Im Goldenen Kessel (the Schumacher tap room) is closed Sunday and Monday and opens at 3pm on some other days. There are also a lot of empty shops.
Another sign of the times: If asked to describe the location of  Im Goldenen Kessel I could say between the McDonalds (new) and KFC, across from the Burger King. 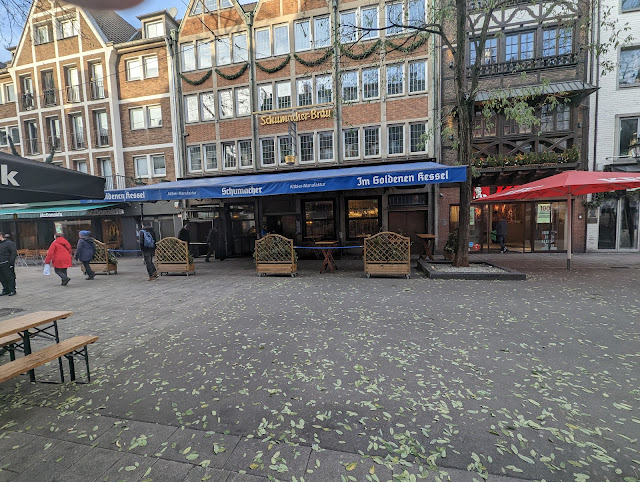 At Schlüssel, the beer was pretty much as I remembered, not a bitter as Uerige, making it seem sweeter. Still good, though 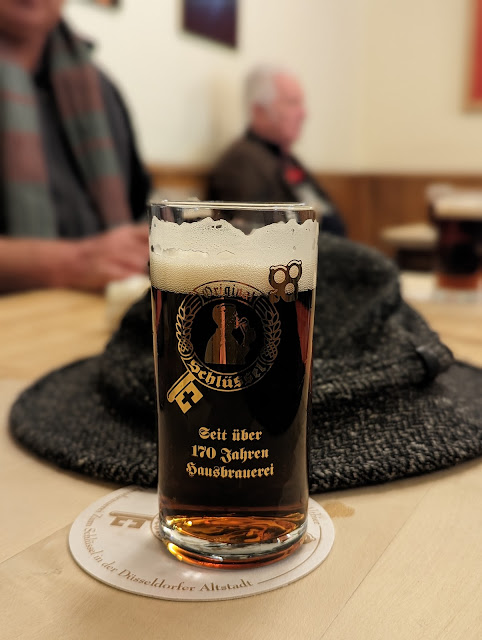 We had a few to insure that the first wasn't  a fluke. Soon it was 3pm, the opening time for Füchschen, so we headed over there. 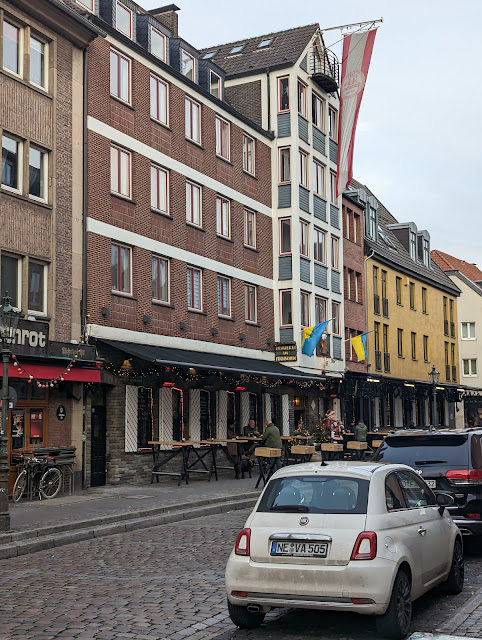 Normally, the Weihnachtsbier (Christmas beer) is only available in the bottles until Christmas Eve when they serve it from the barrel. This year, however, they started serving it from a keg (not a gravity barrel) on December 1. I believe they have a gravity keg on Sundays. 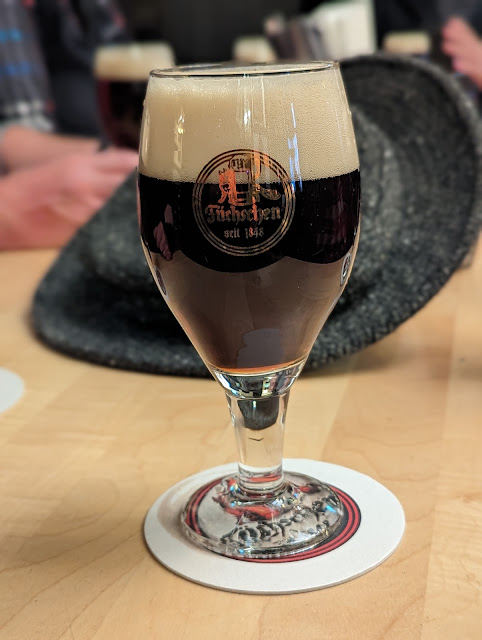 It was very good. Malty and hoppy, much better than what I remember of the bottle 6 years ago (which was probably consumed on the street).
For research comparison purposes, I order the regular Füchschen Alt. It too was very good. They have been upgrading the brewery at Füchschen and I think it is paying off. 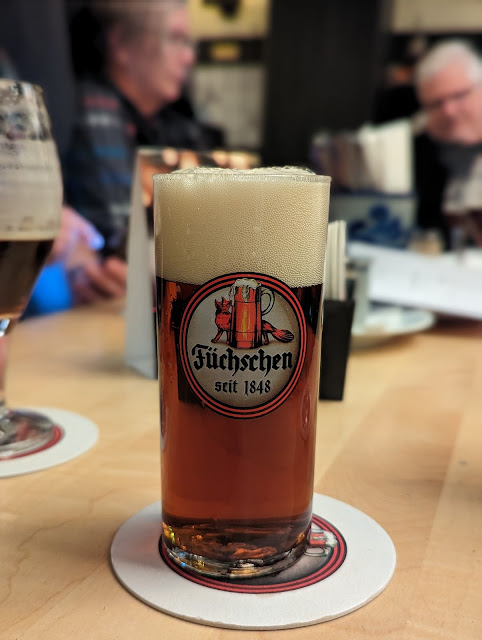 We had a reservation at Uerige for 5pm so we headed back that way. There was supposed to be a barrel of the Jrön, their "Green Hopped"Sticke (we'd say "Fresh Hop"or "Wet Hop") but that was not to be. Not really a hardship because I do like the regular Uerige Alt quite a bit.
Our original table was in a room called "The Sauna" -- it can get a bit warm in there if they don't open the windows (which open into another room, not the outside). The windows were closed as that other room had their projection TV system and they were going to be showing some kicky-ball event. But they said "plenty of room in the Brauhaus"so they moved us over there. That is my favorite room.
The beer was the same as it was that morning -- very good. 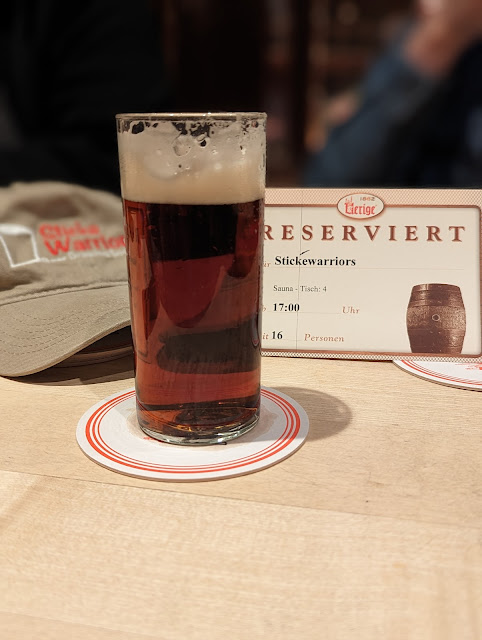 We had. a good view of the brewhouse and a brew was underway.  The young man doing the brewing was having problems though. He had a concerted look on his face and was talking on a phone. The face was similar the one I have when I am on the phone to technical support trying to get my computer to boot.
We was back and forth to the control console and the two kettles and I think he had a stuck mash because he was using the long piece of wood they use as a dipstick in the boil kettle to try and dislodge something in the mash/lauter kettle.
For dinner I ordered the Kasespätzle. It was good but I thought a bit overpriced for what you get. That is sort of true of all of the entries at Uerige. I think they are priced for when there are trade fairs and people are on expense account. 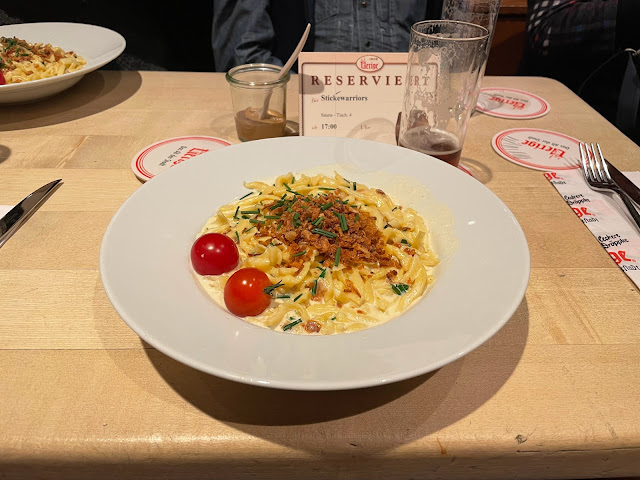 Beer drinking continued apace for a few hours. Take any of the above pictures and repeat. 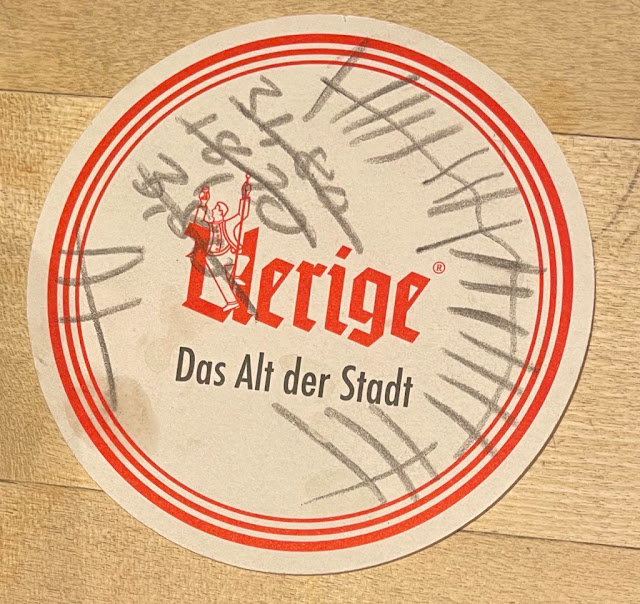 (This was just for part of one table).
Of course it's not over until it's over and the Killeptisch has been consumed. 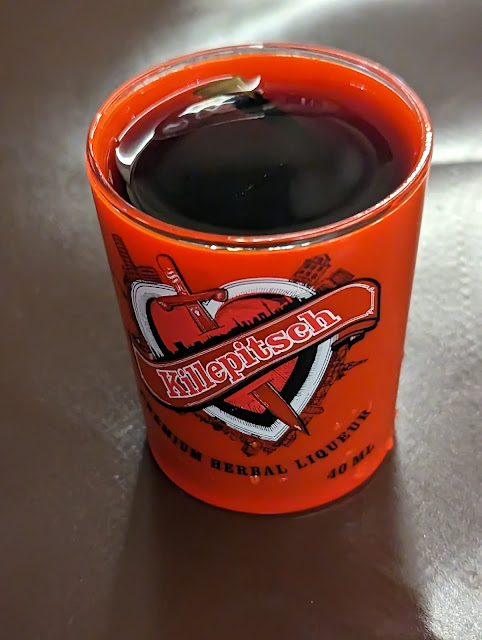 With that we called it a night. Our "Sticke-less"Sticke night.