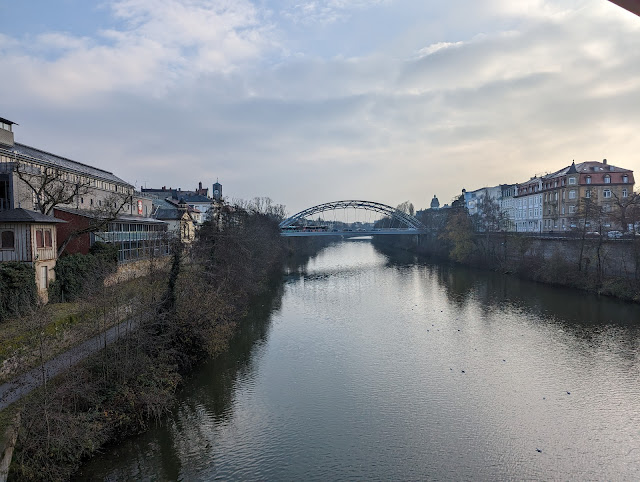 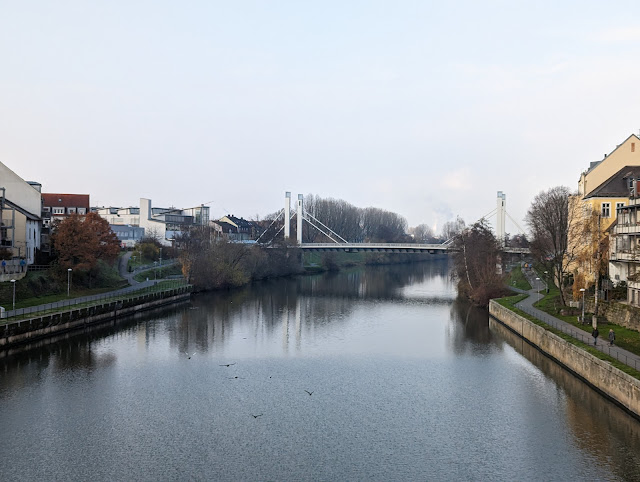 We headed down to Hopfenhaus. the taproom for the Brauerei Hopfengarten. They are a very small brewery in the Gärtnerstadt. They are connected to the family that owns one of the remaining commercial gardens in Bamberg. They are know for making "infusions" with products from their commercial gardens. People know know me know I like "beer flavored beer" but their creations are interesting and worth trying. The also grow the hops used for dry/wet hopped beers. 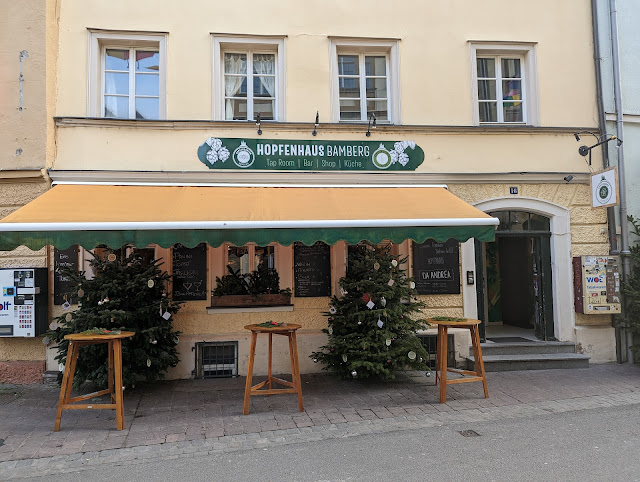 They have 7 taps but one was dry. The one off frame is called Koala and is made with eucalyptus. 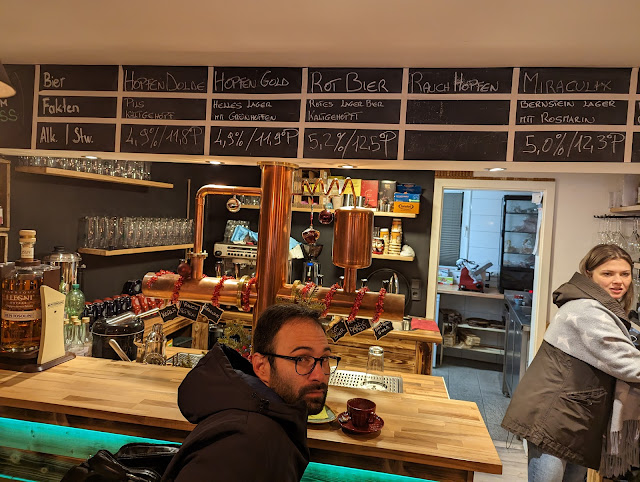 I usually have the Hopfen Gold but today started with the Hopfen Dolde ("Hop cone"). 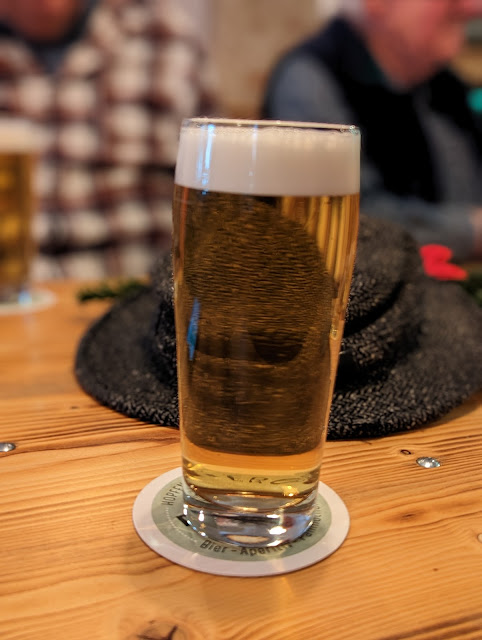 The flavor was nice but sadly it breached my threshold for diacetyl -- too much butter. Others had the Hopfen Gold and Rotbier and they were quite nice.
One thing I remember from past trips was their "Hop Gin." Today they had a Smoked Hop Gin., which sounded like it would be worth a try. 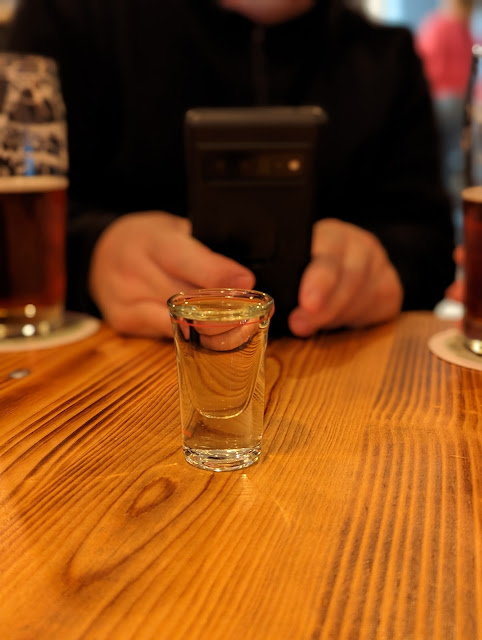 Another miss here. it was fairly rough with not much noticable hop flavor and some general suggestion of smoke. Stick to the plain hop gin.
I asked of they had small sizes and they did, sort of, a half pour in a regular glass. So I ordered the Koala. 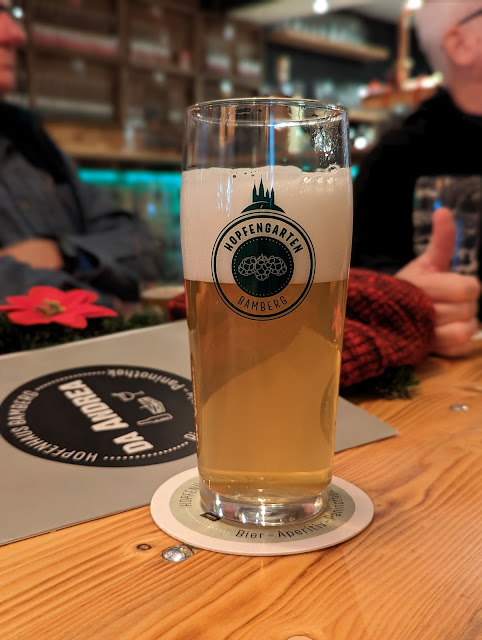 There was just a hint of Eucalyptus -- I'm not sure I could have identified it without being prompted. A half measure was about right -- I enjoyed it but a full seidla would be too much.
We headed down toward the Obere Brücke and tucked away in the Obstmarkt is Brüderla, the new taproom for the contract brewery BroBeer. 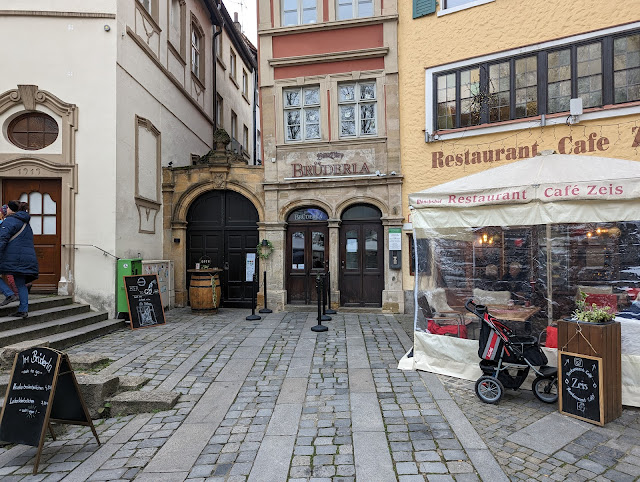 Last year this was a place called :"Bier Haus" and had a nice selection of draft and bottled beers from the area.  BroBier brews their beer at the industrial sized Schlossbrauerei in Reckendorf (they used to have full wrap bus ads for their "Recken Pils" on the Bamberg city buses.
I ordered their Vollbier and it was a good beer, a bit hoppier than most, which I gather is part of their goal of attracting younger drinkers. 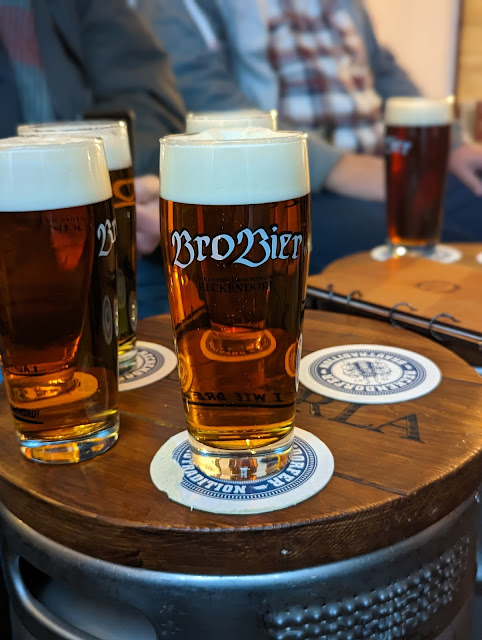 They have 5 standard beers, one seasonal (a Pale Ale today) plus two Reckendorfer beers. 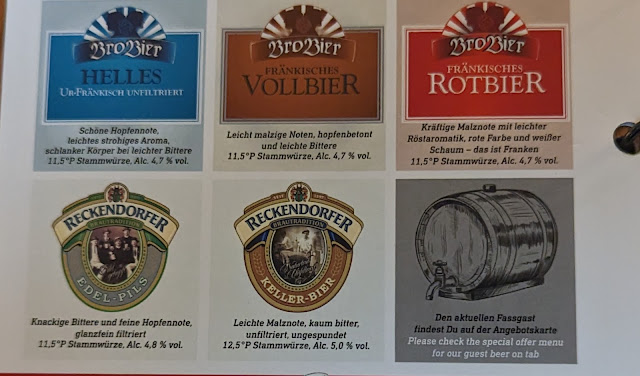 The Helles and Rotbier were also nice from tastes from other peoples beers. The Pale Ale was a bit of a disappointment. Nothing really wrong just no reason to drink another.
I had a positive memory of the Reckendorfer Kellerbier from a long ago visit to the brewery. It was good, though not it the top tier of area Kellerbiers. 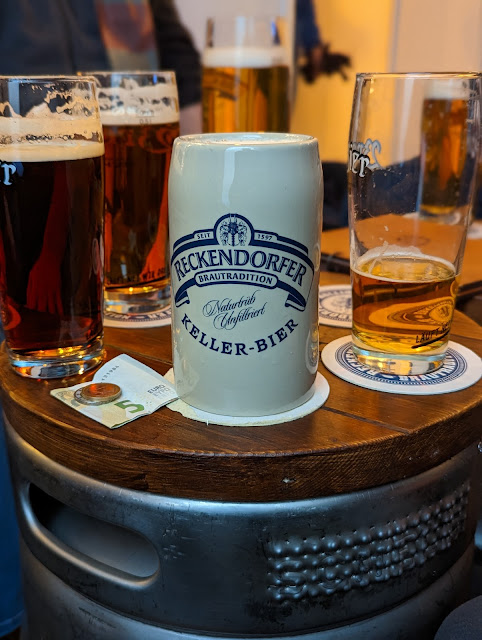 We couldn't decide what to do next and we had time until our dinner reservation at Klosterbräu. But we headed there anyway and decided to have a beer in the Schwemme.
Twenty odd years ago Klosterbräu was one of my favorites. In fact, the first beers I had in Bamberg were from Klosterbräu. The Braunbier and Schwarzla were excellent and they did a killer pale bock.  Starting about 10-12 years ago the quality went downhill and I used to joke it was time for my annual beer dump check, because they were (to me) not drinkable.
About 3 or 4 years ago they were purchased by the local industrial brewery Kaiserdom, who upgraded the brewery and provided trained brewers. Brewery turnover was one the the problems with Klosterbräu. The beer quality has greatly improved.
Some locals are concerned, though, viewing like we might when a large brewery buys a local craft brewery. Are they going to use their larger size to muscle in on the smaller breweries? It is something that bears watching,
But in the meantime, the beers have improved. They have added a Rauchbier to the lineup (no matter what their marketing says, it is a new beer). Very smokey. 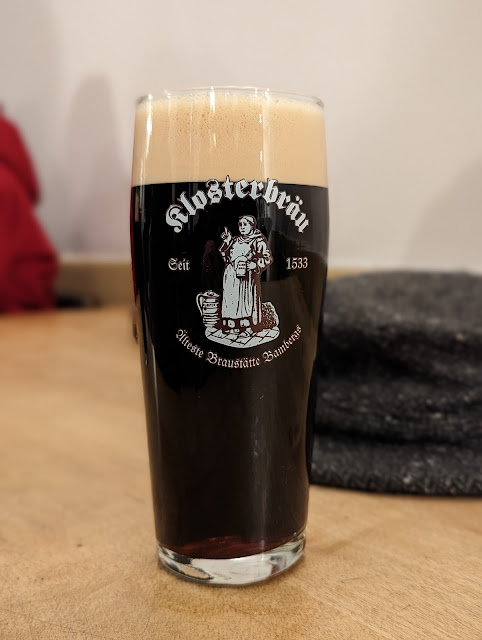 After freezing the Schwemme, we found out our table was a side room and was ready for us. We gladly moved indoors.
Next up was the Schwärzla ("Little black") and it was much, much improved. Almost like a bottom fermented stout. 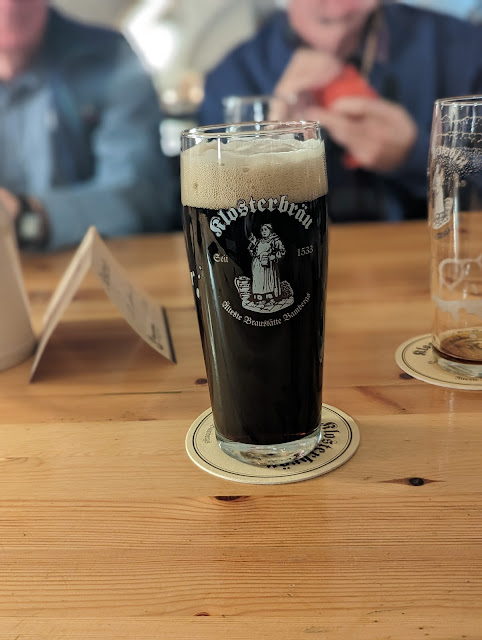 Leberknödel soup was on the menu and it sound good, so I ordered it. It was not like any other I've had in Germany. The broth was like beef soup and the dumpling was very dark as well. It wasn't bad, just not what I expected. 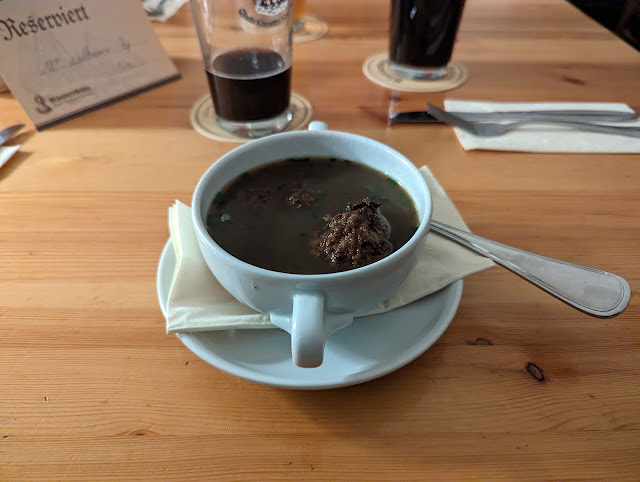 The other new beer since the takeover is a Kellerbier. I first tasted it in 2019 after a bike ride and it really hit the spot. This is edition was good, but not as good as I remembered, though the bike ride may have influenced me. 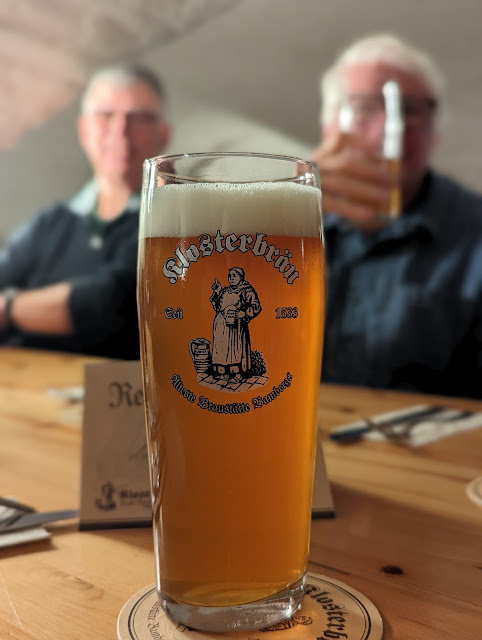 The main course was Schweinebraten with Kloss and Wirsing. Again, the gravy was a bit darker than I'm used to but it was good. The wirsing was a bit strange, not really creamed and a bit think and lumpy.
With that we finished up and headed back to the hotel. It was Saturday night so Spezial was closed so no danger of a night cap pulling us in.
I played with the night mode on my phone and here a couple of Bamberg night scenes. 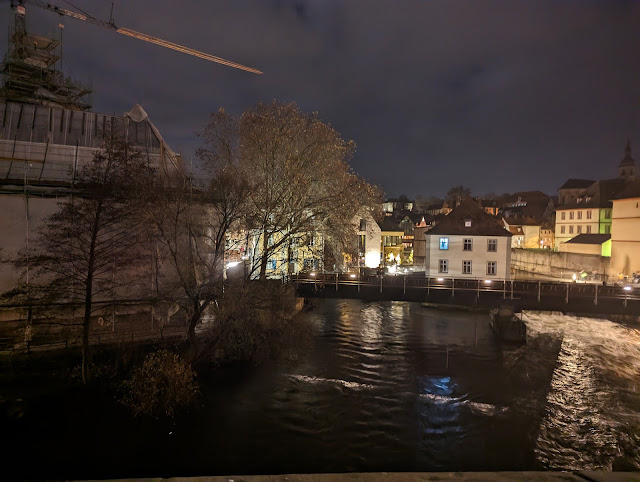 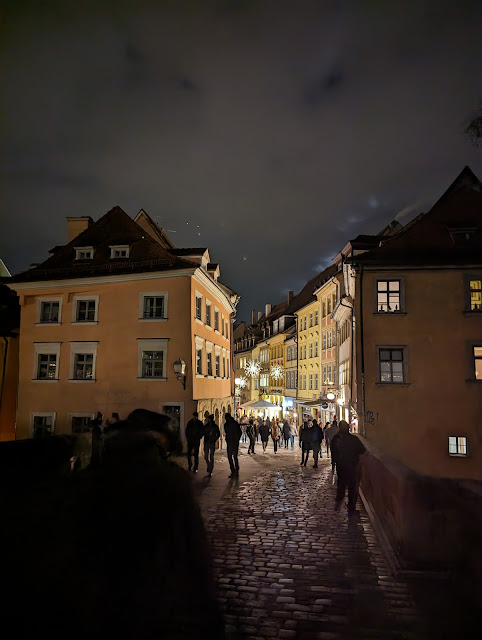 I remember that, on our first visit to Bamberg, what is now Bruderla was an Irish theme pub - they were all the rage then. It has gone under several guises since. I seem to recall someone telling me that it was a favourite hangout for US-serving personnel back in the day. Bamberg must have been a rather different place when there were tens of thousands of US forces stationed there. Where is the Hopfenhaus? In the Gartnerstadt?