We had booked a 9:26am train, getting us into Düsseldorf about 1:30pm, giving us plenty of time to get to the hotel, check in and and have an afternoon session or two before our dinner reservation at Füchschen.
About ten minutes after the train left Bamberg I got an alert on my phone that our connecting train was going be be an hour late arriving in to Würzburg. By the time we reached Würzburg the delay was up to two hours, giving us a 2:30 minute wait. If I were writing a movie script about this the direction would be:: "Cue ominous music."
Our RB (regional bahn -- one small step up from milk run) actually continued on to Frankfurt, arriving about the same time as our delayed ICE. There is frequent service from Frankfurt to Düsseldorf but if we stayed on our local train we would have no seat reservations and with what looked like a developing chaotic situation might mean standing. So we decided to wait for our original ICE (express) to of Würzburg. Decision point number1
The two hour delay slowly increased to three hours.
We decided to break open one of the "train beers" a 2021 Spezial Bock that had been aged in Laphroaig whisky barrels. It had been int he bottle for a year and we were warned it might be a bit sour. 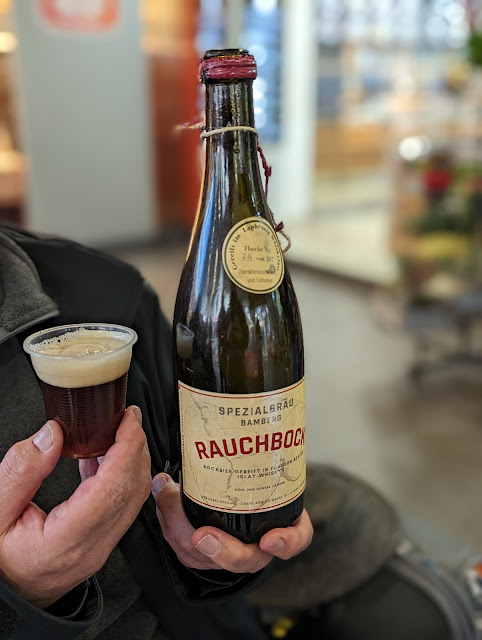 It wasn't but there was a bit of acidity that someone might perceive as sourness. The beer was interesting but the Laphroaig really dominated. You couldn't really tell much about the original beer except it was malty.
We had been tracking some of the other trains from Würzburg to Düsseldorf -- all were delayed but there was one that was scheduled to arrive before our train -- originally by 30 minutes but its delay increased until it was about 5 minutes earlier than our train. Both trains were on the same track.
When the delay was 30 minutes we thought we decided to go to the track and make a snap judgement if we thought there would be seats. But when the delay was down to 5-10 minutes we decided to wait for our train and our confirmed seats.
Cue ominous music #2, Decision Point #2
The earlier train came and left with lots of people getting on. Our train arrived and we boarded and found our seats. We would be 3 hours late but would still make our dinner reservation.
So we broke open train beer #2. Broughton Breweries Old Jock Imperial Stout, Canadian edition. 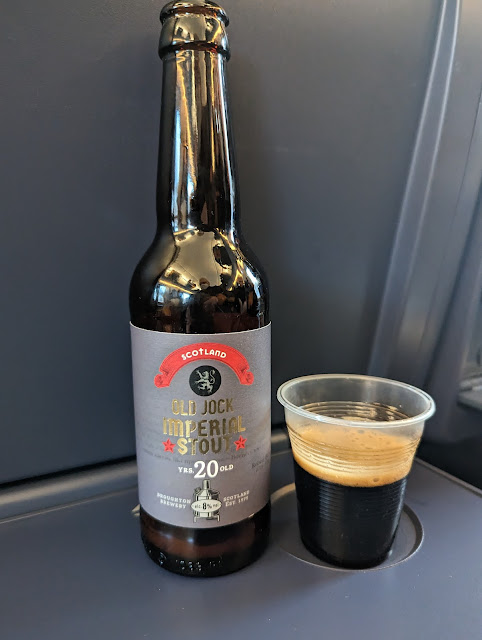 The story on the label was they had brewed this for an export customer in 2000 and put it into whisky barrels. But the customer never claimed it So it (supposedly) sat in the barrel for 20 years until they decided to bottle it and sell it exclusively in Canada in an attempt to break into the Canadian market.
The twenty year thing makes some sense because if the customer paid up front the brewery couldn't just dispose of it. So after 20 years it might become "abandoned property" and the brewery could sell to to recover storage costs. I saw something similar once in Antwerp with 20 cases of Chimay that a merchant ship bought but never picked up. However British beer friends scoffed at this idea and said we were being scammed. I don't know -- if you can't believe in what is written on a beer label, what can you believe?
Anyway, the beer was awesome, no matter it's story.
Now back to the drama. Our train announcer mumbled when he made announcements and he held the microphone to close to his mouth so there was lots of distortion. I couldn't really understand the German or the English version. But I perked up after once announcement, that sounded like the train would now end it Frankfurt.  Surely it wouldn't be just a sort of passing comment. But the lady across from me got quite upset and the DB App now showed all stops past Frankfurt canceled so I knew I had heard correctly.
So we found ourselves standing on the plant form at Frankfurt Hbf, over an hour later than we would have been had we stayed on the local train. And the earlier train we had just about border but decided not to and just left Frankfurt, headed for Düsseldorf.
Decision Point #3:
We had two choices, a train that left in 30 minutes but took the old Rhine route thru Mainz, Koblenz and Bonn and took 2 and half hours. Or a train on the direct route that took a hour and forty minutes but we'd have to wait over an hour in Frankfurt. The trains scheduled arrival were about 10 minutes apart.
The longer route train had only a two minute delay posted, while the later one was running about 1:30 late. We decided to take the longer route as that would probably be less popular (so more chance of seats) and it hadn't had any real delays.
The train came and we managed to find seats fairly close together. Some of them technically were reserved for frequent travelers with last minute change of plans but we gambled and no one came to kick us out. We would, however, not make our dinner reservation, so I called and canceled.
Once the train was pass Mainz, we broke out the last train beer. A 1999 Thomas Hardy's Ale, the last vintage brewed at the Eldridge Pope brewery before the brewery closed. 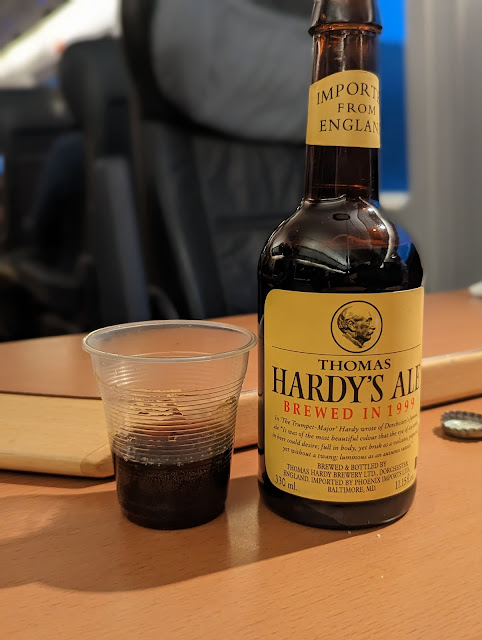 I have a bunch of these and the have probably reached their peak and should be drunk. This one seemed to have less carbonation that other's I've had recently but was still a great beer. Very much brown sugar and raisins and alcohol.
I didn't really relax until we reached Köln (Cologne). 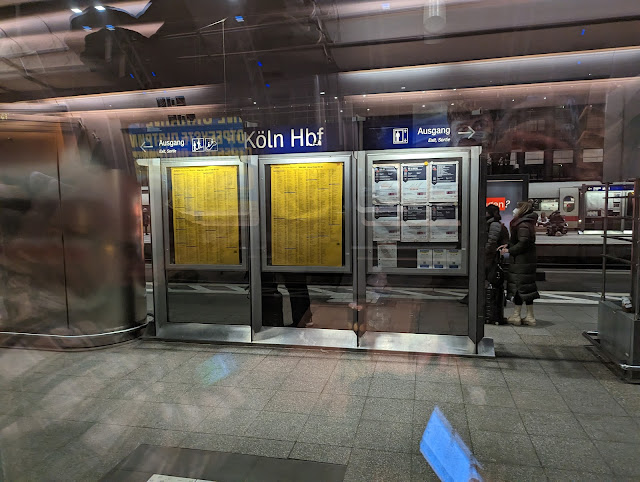 Soon after, we were in Düsseldorf. I resisted the impulse to kiss the cement, mostly because I wasn't sure I'd get back up.  We took the U-Bahn to the Altstadt, checked into our hotel and soon were headed out in search of food and beer.
Our route took us past Sweine Janes, so we popped in for a Schweinebrötchen. Food on the go. I was standing under their red lights so the picture isn't that good. But the sandwich was. 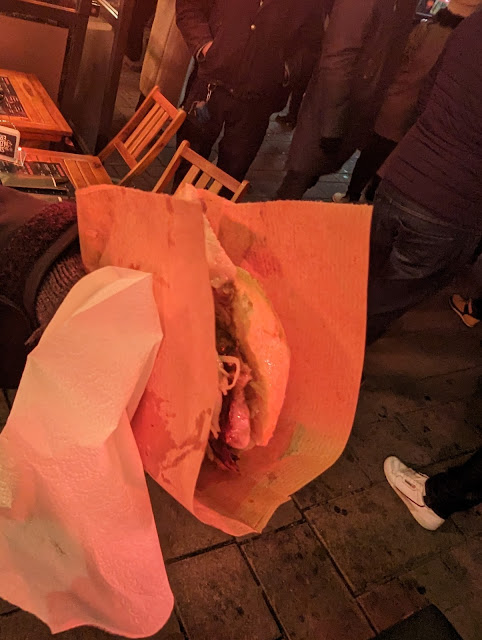 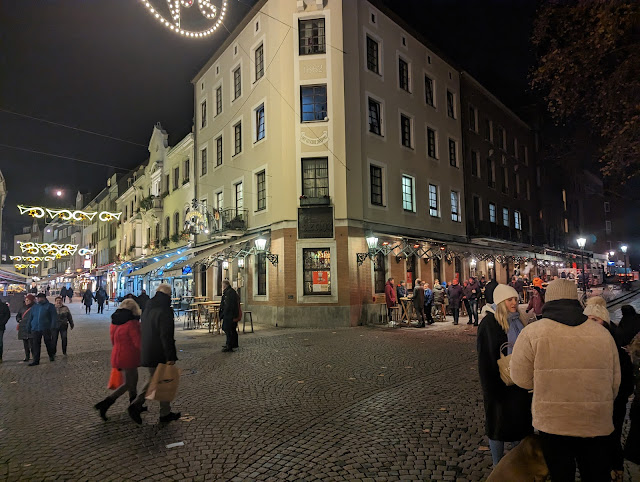 The front rooms were full the the Brauhaus had tables so we parked ourselves there and soon the first round of Uerige arrived. The phone software burped because the glass was not curved. 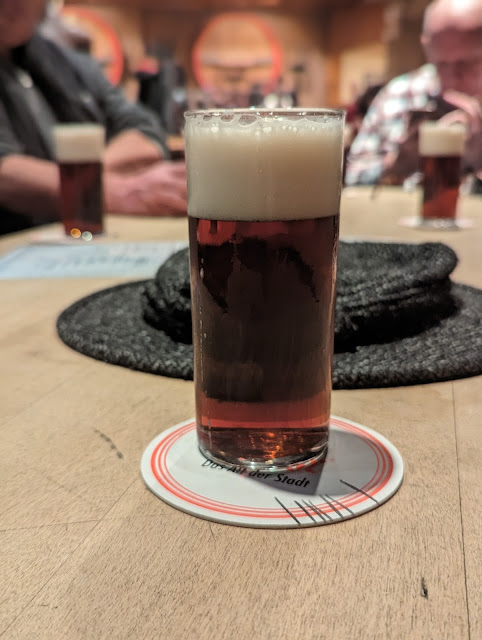 The piggy sandwich filled a void but a Frikadelle seemed to be in order. And the mustard, oh the mustard... 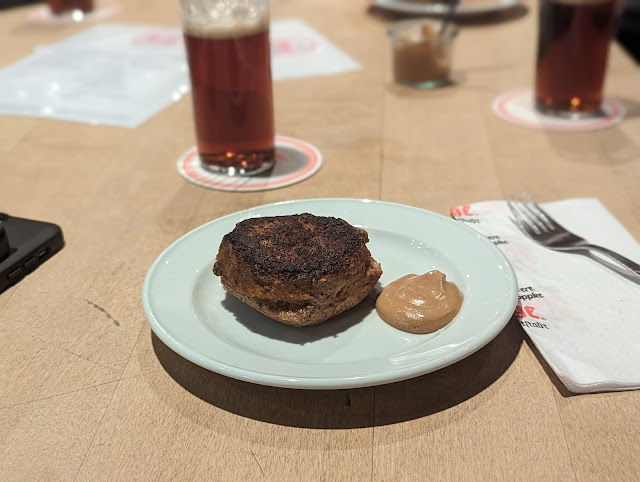 As is the case at Uerige, once it was clear we would be there for a while, glasses were replaced almost as soon as they were empty. 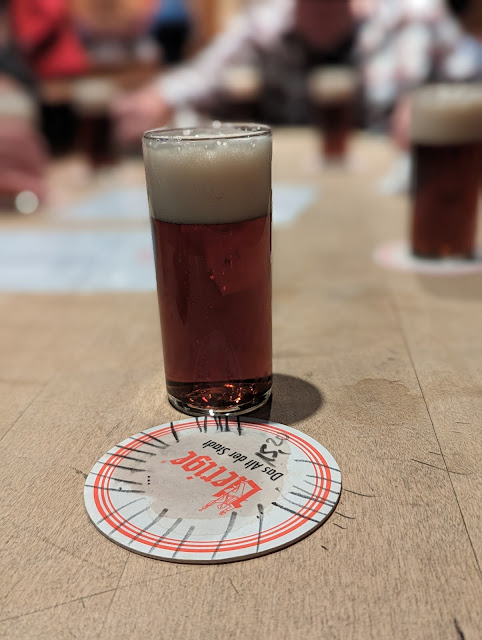 After a bit, the events of the day took their toll and we decided to reconvene in the morning. But on the way back to the hotel, an obligatory Killepitsch 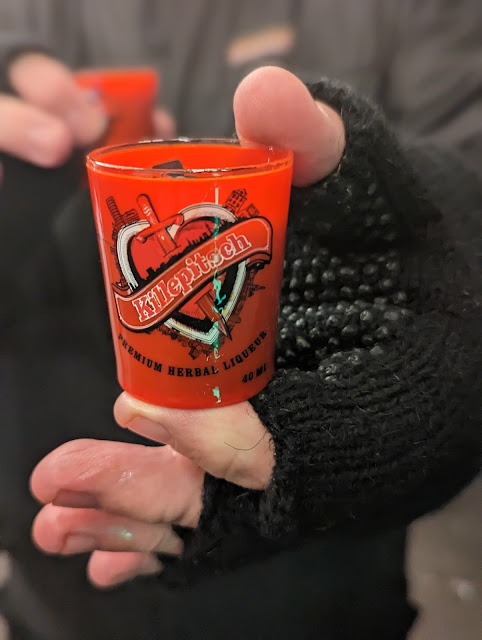 Last year Deutche Bahn cost me a day of drinking in Bamberg. This year it was an afternoon in Düsseldorf. Of the five past Sticke trips we've had major problems on the stretch at least 3 and maybe 4 times. In theory they will refund half our fare but they can't refund the lost time.
Posted by The Mad Brewer at 1:41 AM