Today we were going to explore the Karlín district. First stop was Diego Pivní Bar 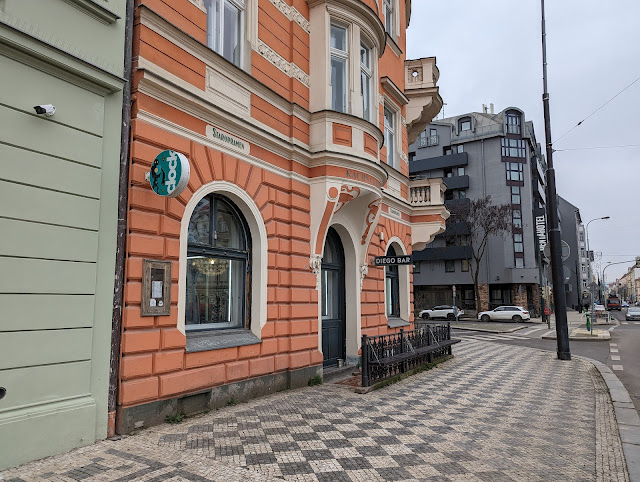 It is a cozy underground pub with a Mexican theme. I tell people I had the best tacos al pastor in Prague there. Of course, it is the only place in Prague I've had tacos al pastor...
They have 10 taps with a decent selection. 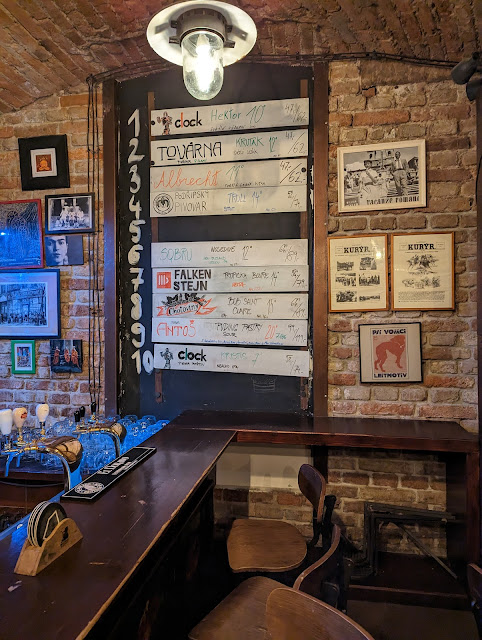 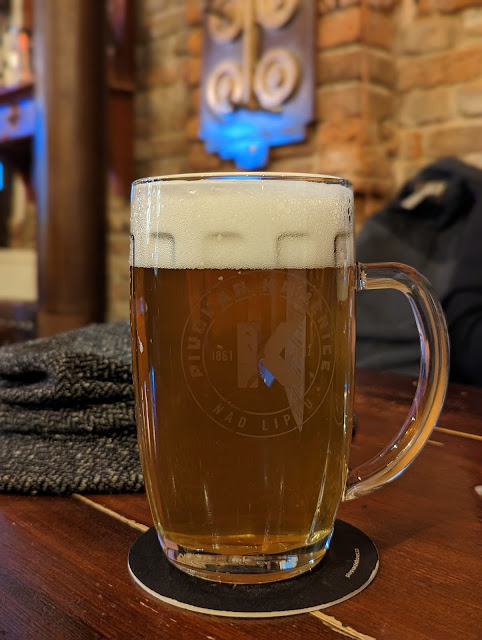 I happened to have a picture of the beer board from May 2017 and this same beer was on then. Today it was Kč 62 while back then it was Kč 46. Fairly standard increase for Prague, it seems.
We were really ready to eat and the place was filling up with the lunchtime crowd, so we decided to move on to Pivo Karlín, a fairly new brewpub I last visited in 2019.
The first warning sign was there were Pilsner Urquell signs in the window. 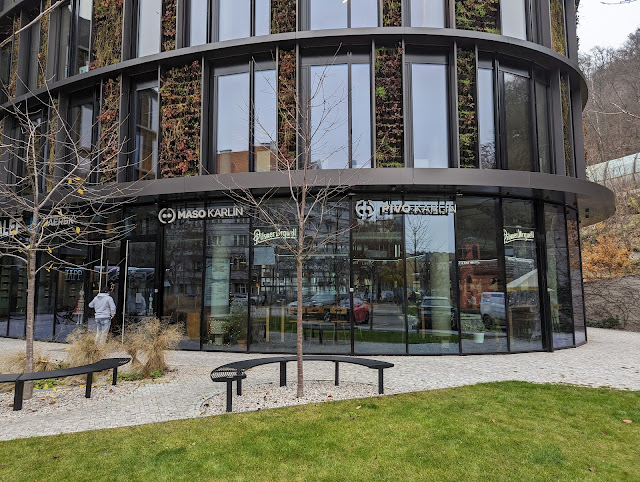 But the brewing setup was intact and they were still brewing beer. I ordered the Karlín 11º the same beer I had back in 2019. 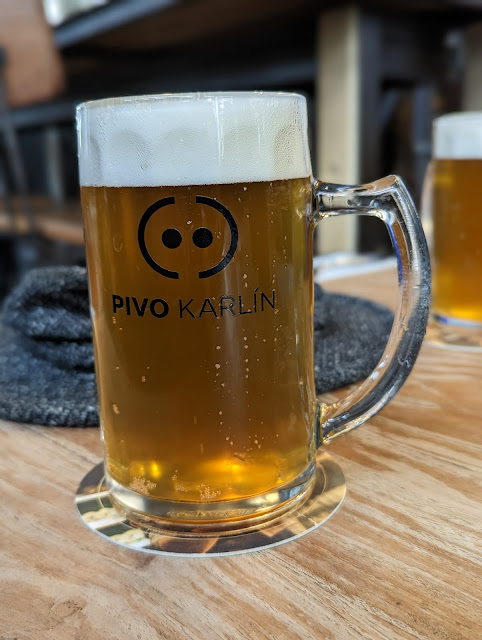 It was kind of ordinary back then and if possible, even more ordinary today. Nothing bad you could point to, but one was enough.
It was about time for food so we had some fun the Google Translate and the menu. Different phones came up with different translations and few of them made sense. That is why in Germany I always refuse the English menu -- the translations often don't make sense.
Well it turned out what I ordered was a schnitzel with potato salad. 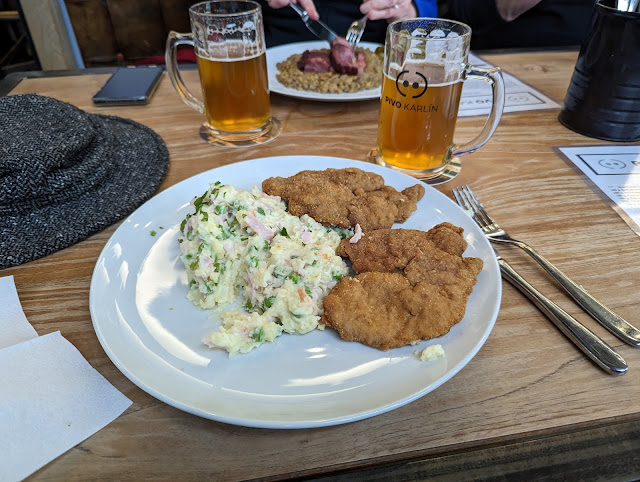 The schnitzel was good, maybe not as pounded flat as you find in Germany, but tasty. The potato salad was... bland.. It tasted just like what I had at the House the day before, so the blandness was a feature not a bug.

The next place didn't open for over an hour so we decided to have another beer. Two of us order the Polotmavý and the other two the Tmavý. 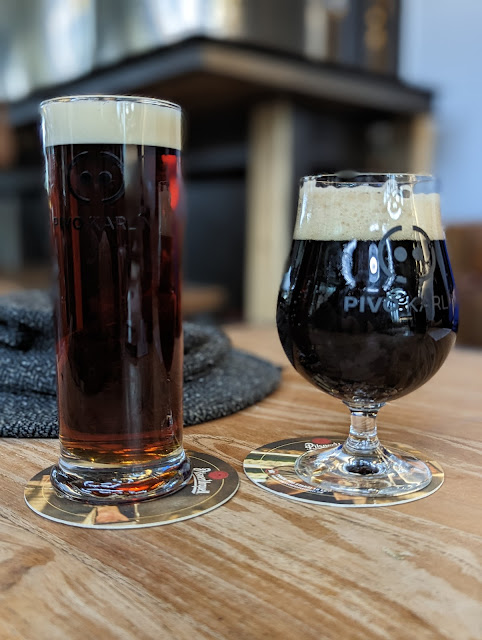 The Tmavý was the better choice by far. It wasn't great but it was enjoyable. The Polotmavý less so. Very buttery and kind of muddled in the finish. It took a while to finish, which is good I guess, since it passed the time.

On the way out they had a chalk board with the beers and it turns out the Polotmavý was actually supposed to be an Alt, Thinking back I raised its mental score a few points. Still way to buttery to be enjoyed but I was evaluating as a lager, not an ale. It wouldn't sell in Düsseldorf but clean up the butter and it would be a passible brewpub Alt. Sort of explains the glass as well.

We still had some time to kill so we stopped in at BeerGeek Karlín. This is a bottle shop owned by the BeerGeek bar but they have a couple of taps and usually a lambic in a bag-in-a-box.

I knew it was unlikely that they'd have a lager on tap. I went with the NEIPA (pronounced NEE-PA here) 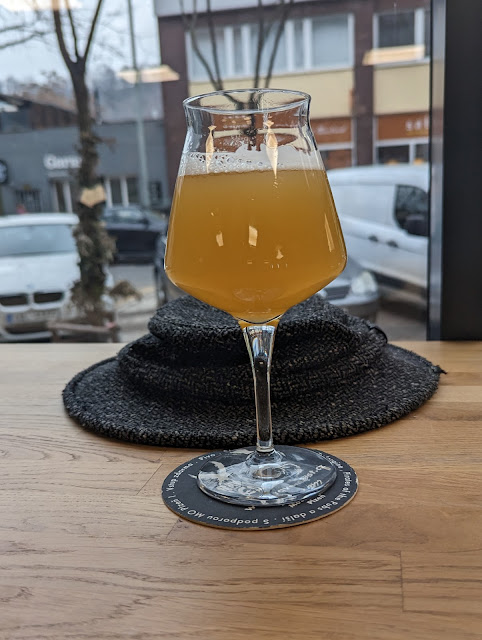 It was actually very good, just not what I came to Prague to drink.
Across the street was a poutinerie, not something you expect to see in Prague. It didn't look like they were open yet or we might have explored more. 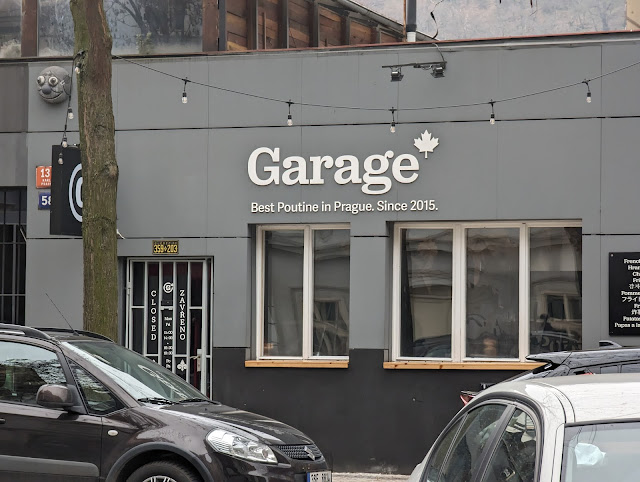 It was now 3pm and Vrátnice was open. 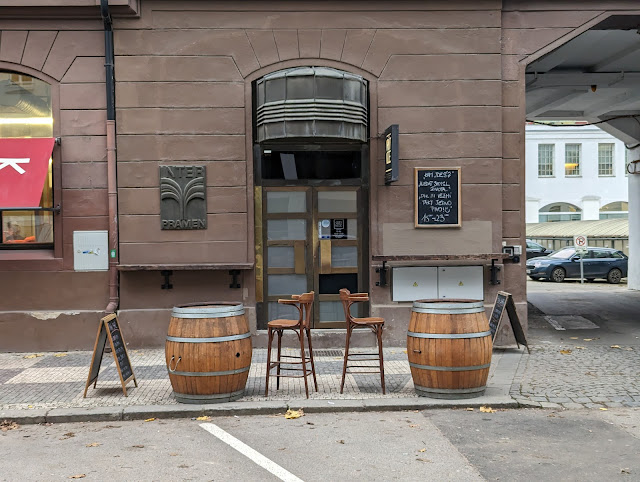 Their beer board has a light fixture poorly placed for photography, so you get an image of the printed menu. 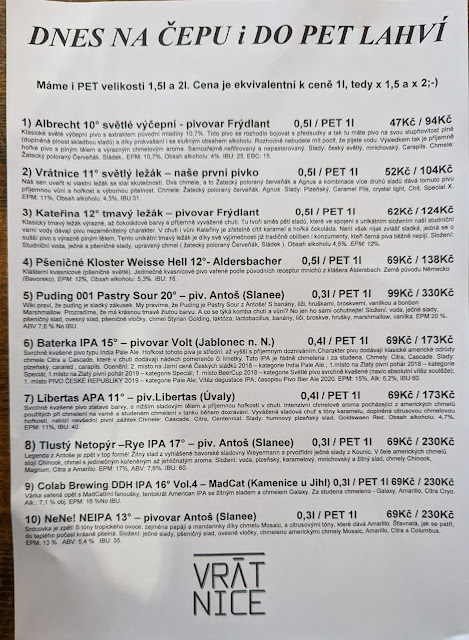 They have a lot of Albrecht beers (and I believe their house beers are from there). I ordered the Albrecht Kateřina Tmavý. It was the best of that style so far on the trip. 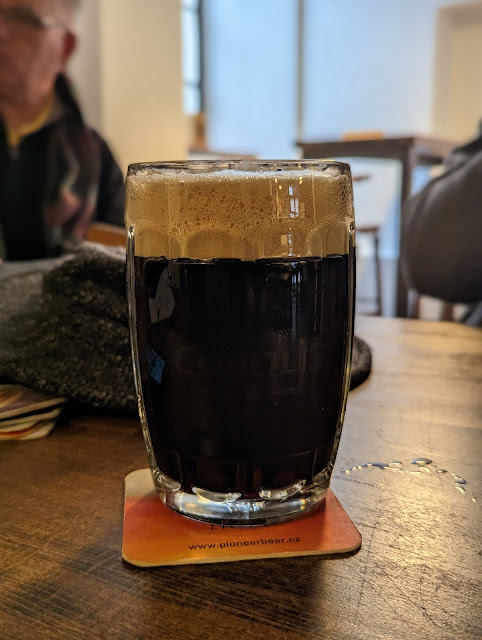 We were trying to decide if we wanted to order another when I got a text from two more of our group who were arriving today. After delays and rebookings they were finally at the hotel and ready for beer.  So we decided to pay up and meet them at the next place which was more convent to the tram they would be taking.
So we walked up to Sednº ("Seven Degrees") which is a fairly new place with a good tap list. 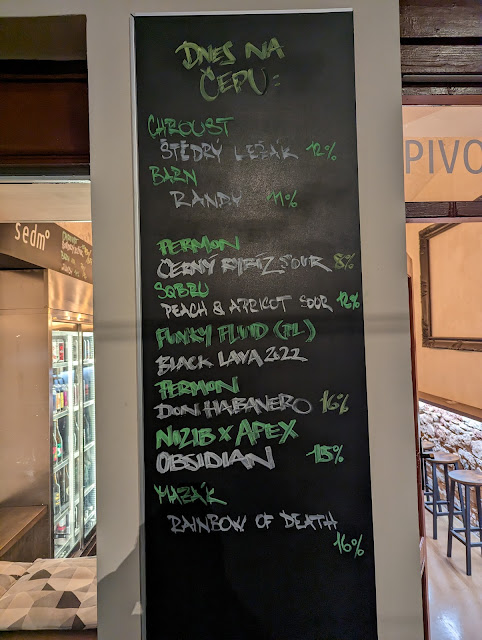 I ordered the Chroust Štědrý Ležák. It was good but had an unusual side note -- turns out it was aged on oak chips. 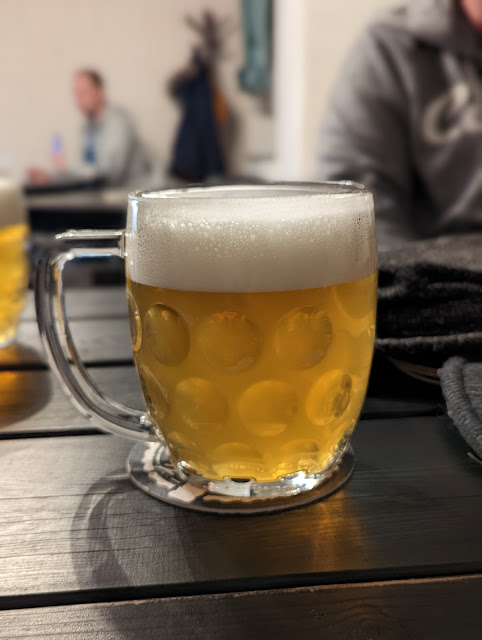 It turns out we got the last of the Chroust and the replacement was Kolčavla Vanočni IPL 14⁰. Kolčavla is a local brewed and I've always had good luck with their beers so I ordered one. 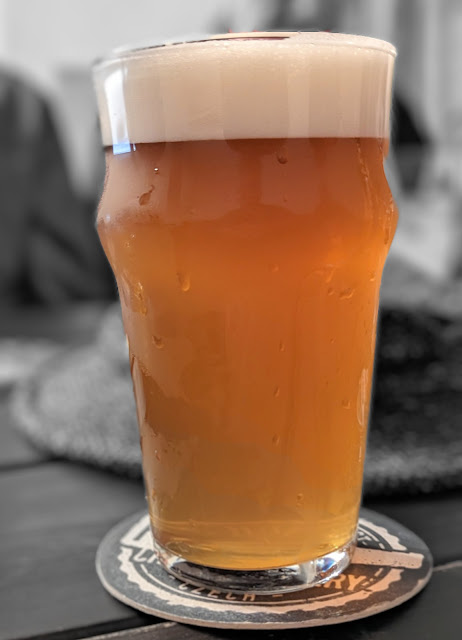 I really enjoyed this beer. Lots of hop flavor and quite a bit of bitterness. Some of my compadres were less impressed but that just meant I didn't have to share...
That morning I had gotten a text from a friend who lives in Prague (but was in Munich this week) about a new place on the edge of Karlín, called BeerHere. It was about three tram stops east and about a 500m walk from the tram stop. We had a little bit of trouble with Google Maps directions, but eventually found it. BTW, it had started to snow. 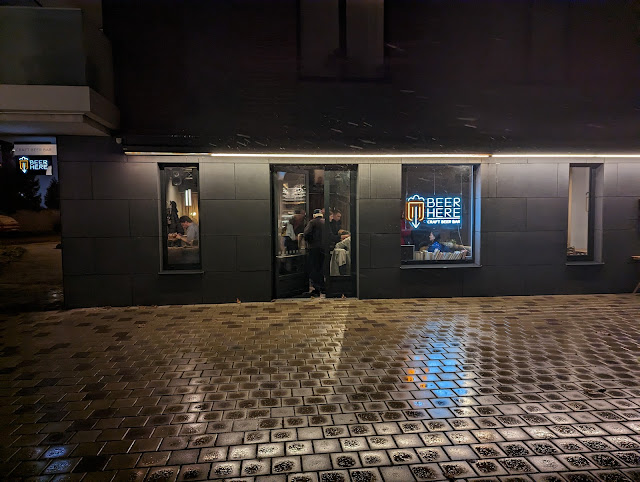 They were just in their third week of operation and the place was fairly full. It was on the ground floor of what looked like an apartment tower in a residential neighborhood  so lots of potential clientele.
They had 15 taps but a couple of them were dry. M.ost of their beers were either from Pivovar Vik or contract brewers who brewed at Vik

I ordered the Angry Thistle Ležák 11⁰ which apparently brewed by "Brewi" but I couldn't find any info on them. 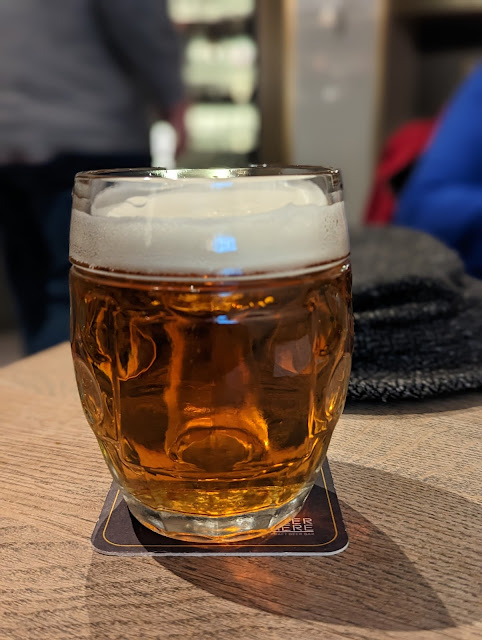 It was a fine beer but some other ordered the Vik Ležák and it was much better. 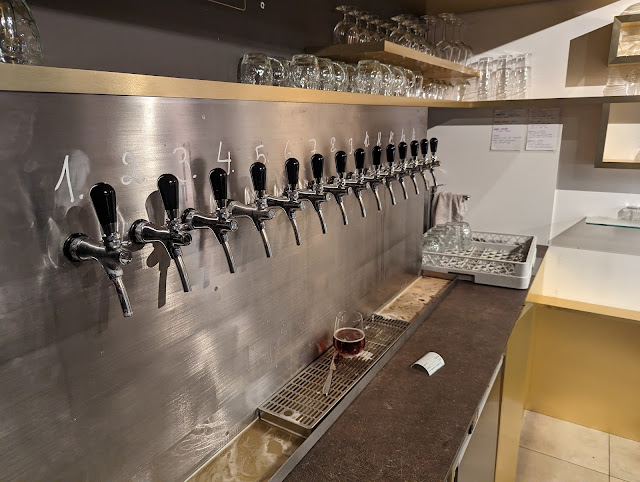 It was time for some food. The menu was various hot dogs, smothered fries and a Cuban sandwich. I had the "Kraut Dog"which was good. 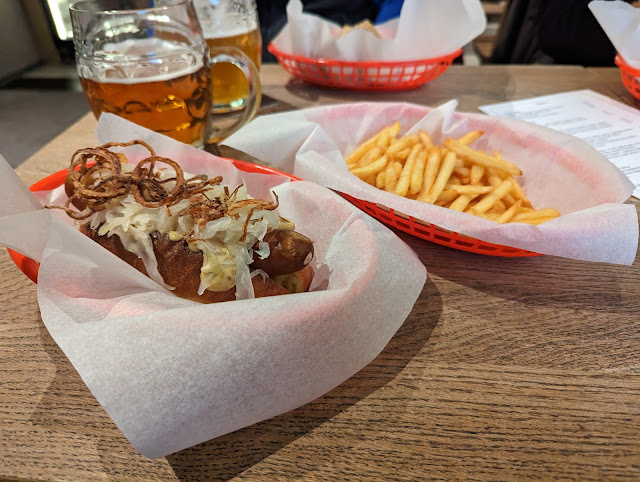 I was going to order the VIk Ležák as my next beer but it had kicked and was replaced with a sour. So I tried the Potmehůd Cascadian Dark Ale. It was very nice. 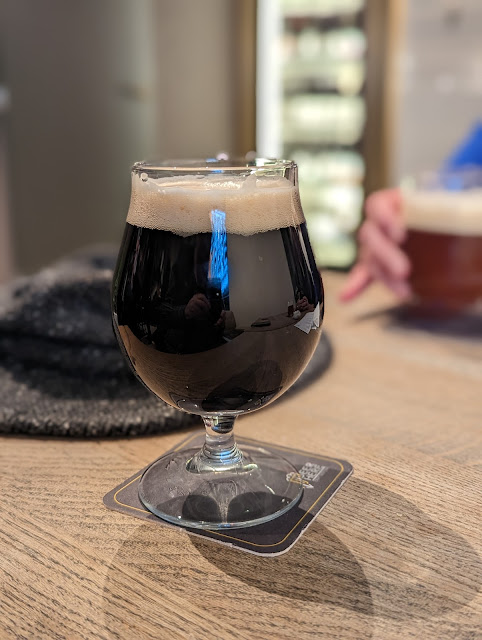 We decided to call it a night then

It is hard to judge when places are new but I really like BeerHere and if you are in Prague and have time you should check it out.