I hopped on a bus and a short walk later I was at Pivnice U Járy. They are sort of a taproom for Pardubický Pivovar. I wanted to visit because the brewery (which is owned by MolsonCoors) will be closed down next year. Production of some beers will be moved to Ostravar brewery (also a MolsonCoors property) 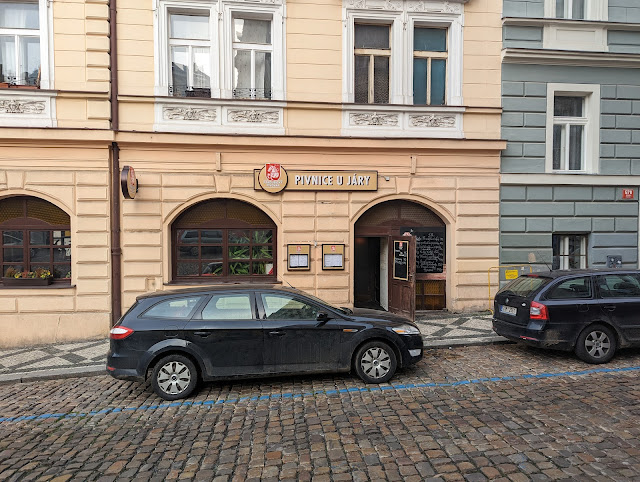 First beer of the day Pardubický Ze Sklepa 12⁰. Quite bitter and a very nice start to the day. 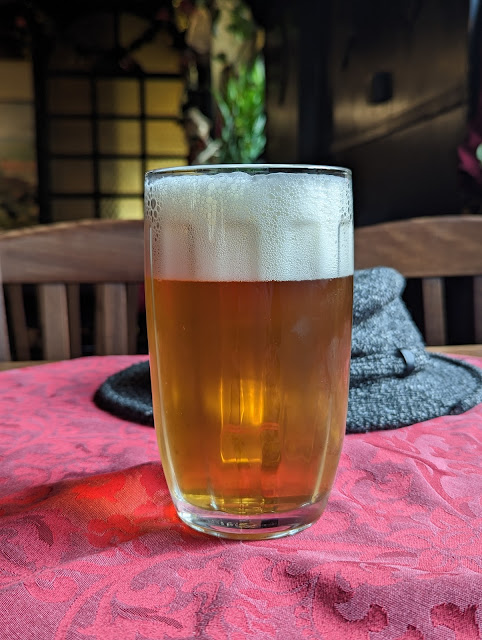 I wasn't really ready for lunch but I remember the food being good (and everybody else was eating) so I ordered. a bowl of sausage soup. 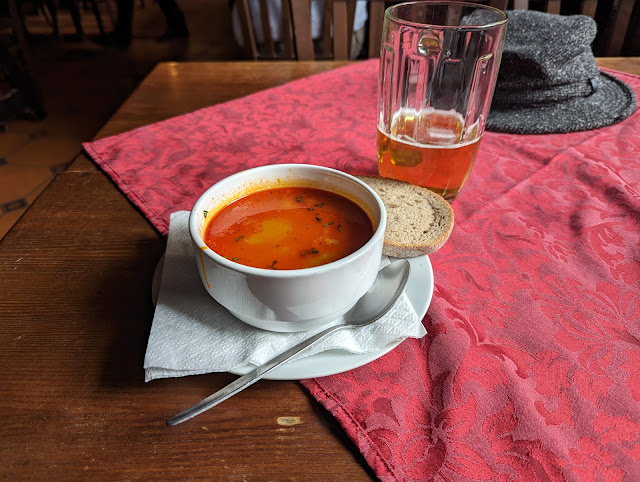 Next up is the reason I came here, the Pardubický Porter. A little early in the day for an 8% abv beer, but I am willing to sacrifice for my readers. It did not disappoint. This is one of their more popular brews so I'm sure production will continue, but there is always a risk that things change when moving to a new brewery. The barman said the Pardubický brewmaster would be working for a least a year at the new brewery so we can hope for the best. 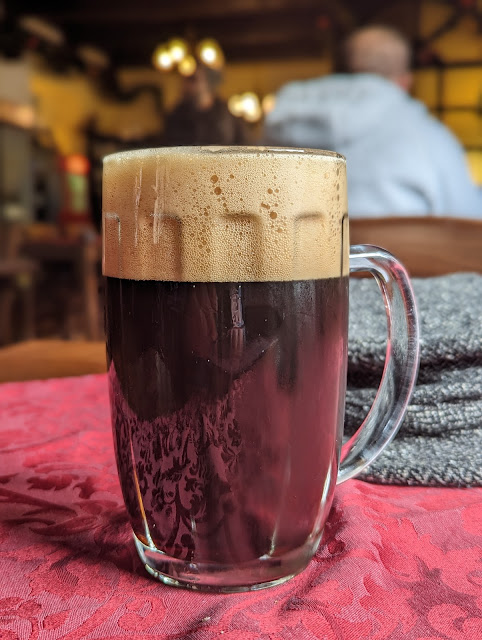 Next on my list was a new place, The HOUSE Restaurant and Pub. They appear to be a chain, or at least a start of a chain. They have two in Prague and a third is under construction. This is the one on Vodičkova 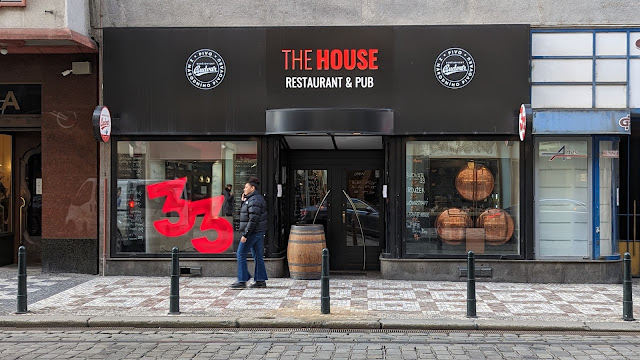 I new they had Budvar 33 in tanks but I had the impression they carried other beers as well. Not really the case. I ordered Budvar Kvasnicový Ležák to start. 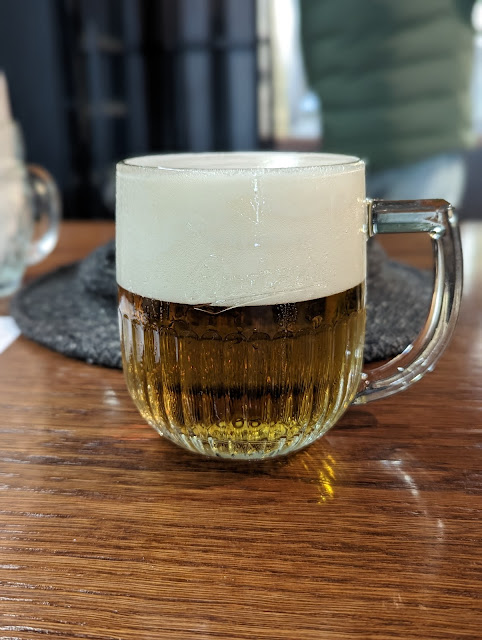 Other than Brewdog Punk IPA they were all Budvar beers. Being side pull taps, I guess one could order a Mlíko pour of Punk IPA. Might be interesting to try sometime.

The "Minipivovar" beer was a Chocolate Stout. It didn't occur to me until later that in might have been the Black Jack collaboration with Sibeeria.
The had lunch specials so I ordered what translated as meat loaf with potato salad. It was fine though the potato salad was a bit bland.
Soon the first couple of people in the group arrived. I was ready for another beer so I ordered the Budvar Tmavy. 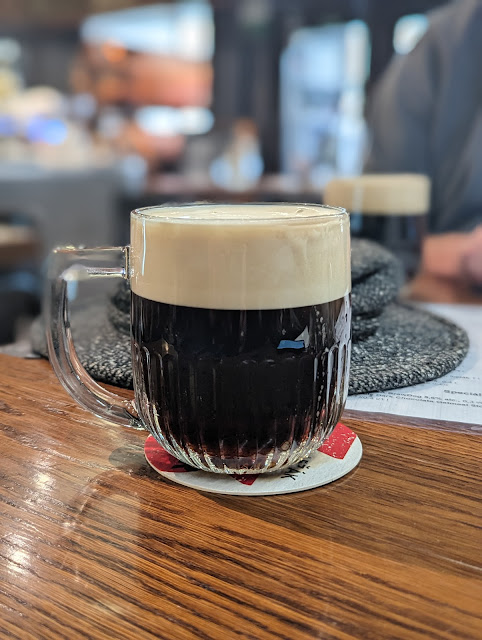 Kind of like the potato salad, I found it a bit bland. With closed eyes I am not sure you could tell it was a dark beer.
The Budvar 33 is tankovna. I was a bit surprised that they didn't carry the Budvar Original. The 33 (it has 33 IBUs) was formulated to appeal to Pilsner Urquell drinkers and they seem to really be pushing it. 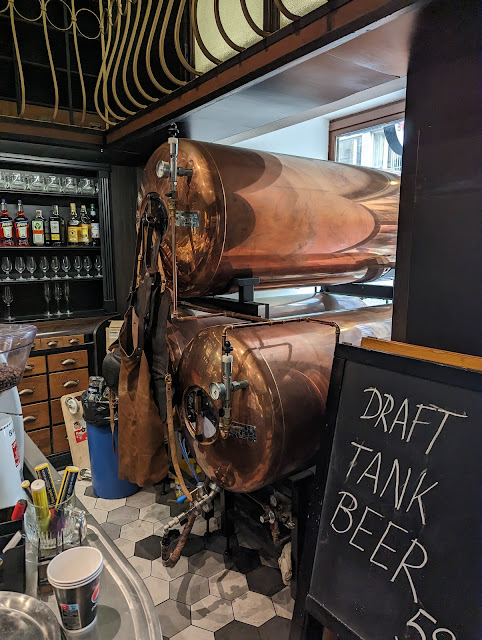 I had a couple of new (to me) places to check out. The first Beer Store was a bust as they don't have any beer on draft and no place really to drink on site.
The second is called BeerMeca and is a bottle shop and a tap room for the Wild Cock brewery. It is very convenient to the Krymskà tram stop. 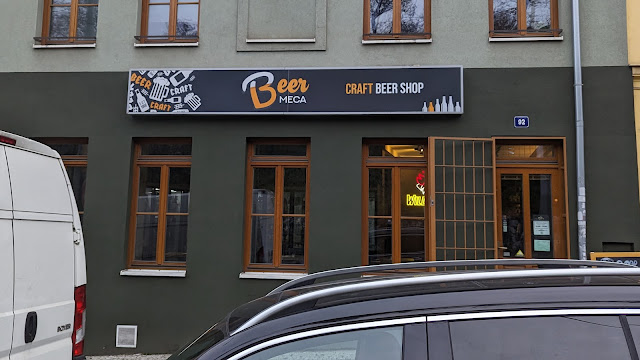 They had an Italian style Pils called Catenaccio, so I gave it a try. Very tasty. 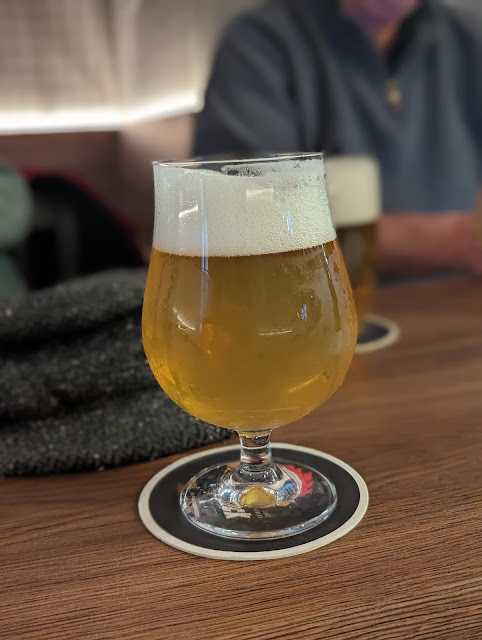 They have four beer on tap. The others had the Kokrhel a Světlý Ležák 12° that was also very nice. 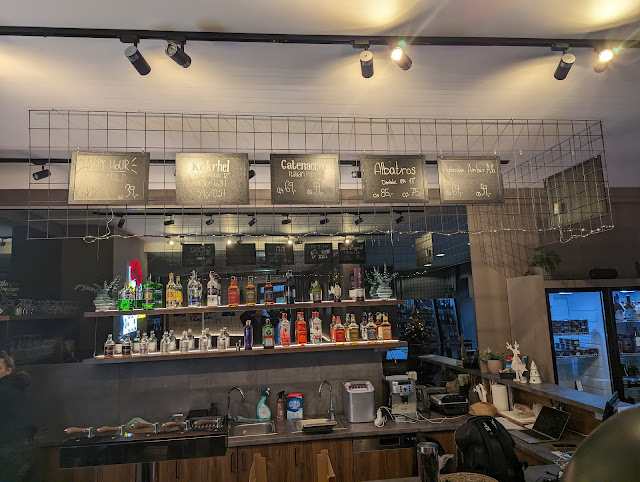 I nice big neon sign let you know whose brewery they were serving. All in all it was a very pleasant place. I wasn't that familiar with Wild Cock and I was pleased with the selection of beers. 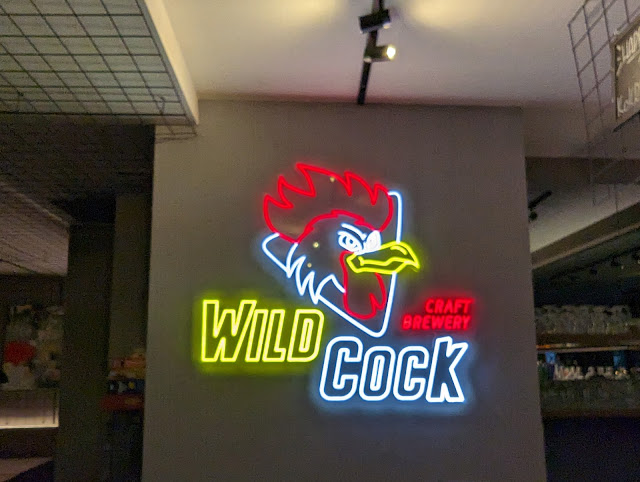 Next we hopped on a bus to Pivní Zastávka. They have been around for a few years but recently moved to a new, larger location. They are also bottle shop with taps, though they are not connected to a brewery 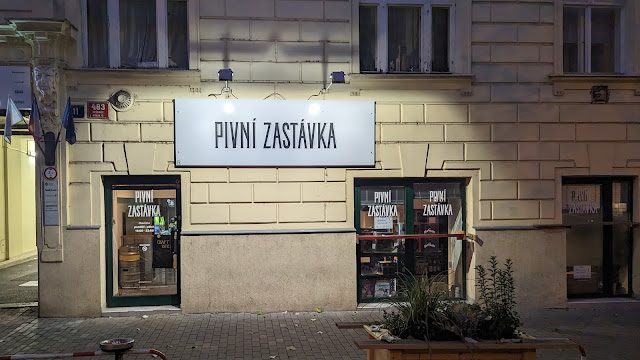 The have five beers on tap. 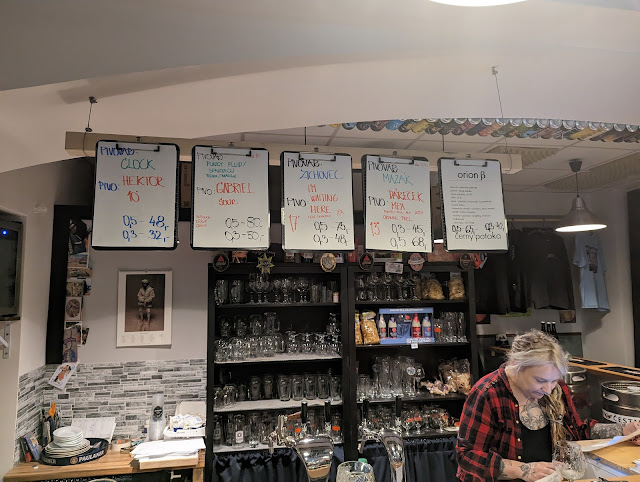 We all ordered the Clock Hector 10º Another nice beer. 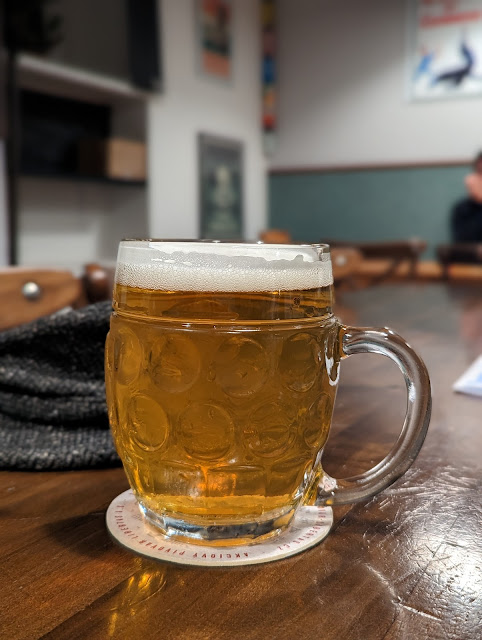 While we were enjoying that, I got a text from the third member of our group to arrive. He had checked into the hotel and was getting thirsty. So we hopped on a couple of buses and soon were back at the hotel, and we immediately set off for Pivovarská Nalévárna.

We all started off with Fabian 10º which was its usual brilliant self. 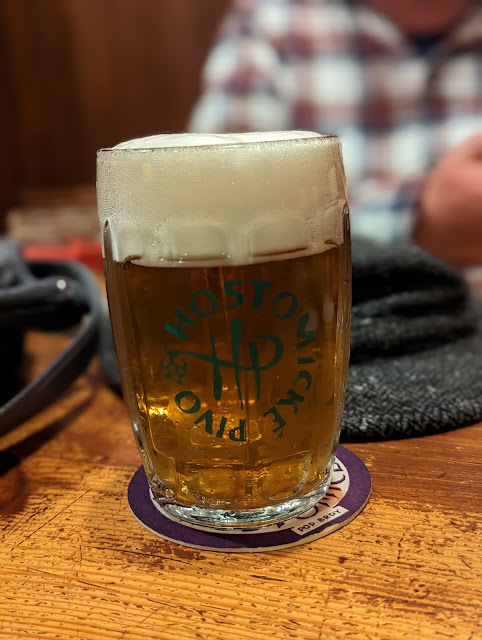 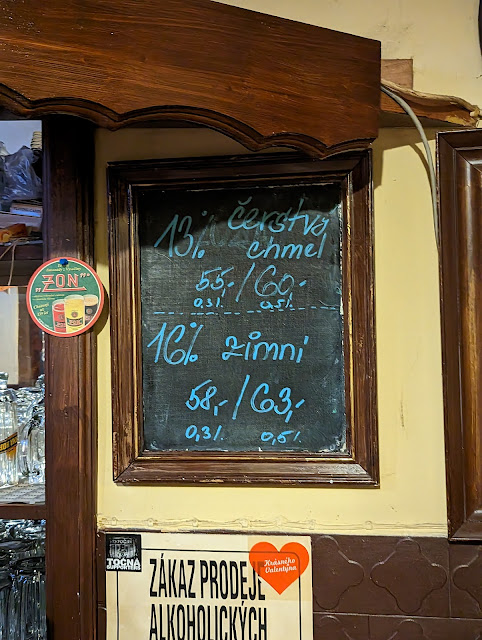 It was pretty much an amber bock -- no "special" ingredients and very nice. It went down way to easily for its strength. 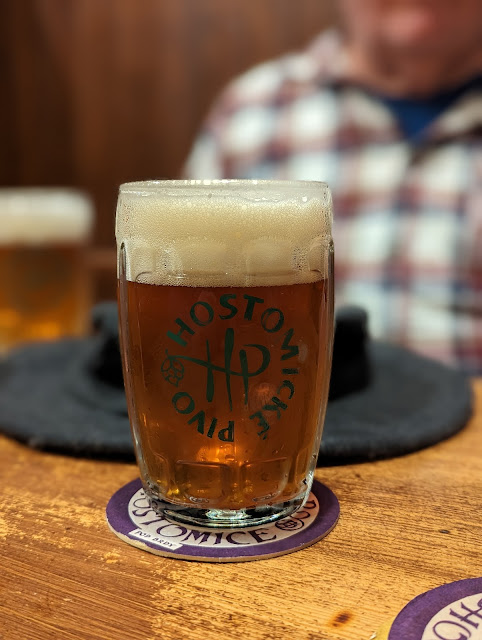 You can see from the sign that the Fresh Hop 13º was still on, so it seem the polite thing to do was to order one. It was still great. 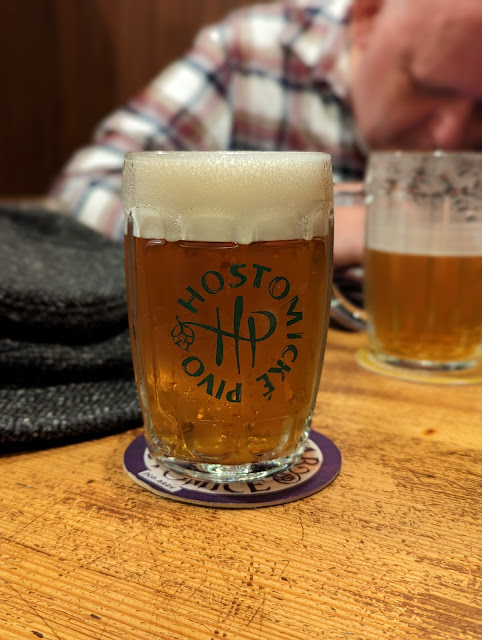 While we were drinking this we learned the next two people in the group, due to arrive Friday, had their flight out of LAX delayed by 6 hours. Hopefully they will make it or we will have to drink their share of the beers.