We got a bit of an earlier start, took the tram down to Vodičkova and a short walk and were at Jelinkova
plzeňská pivnice, my favorite place to drink Pilsener Urquell. 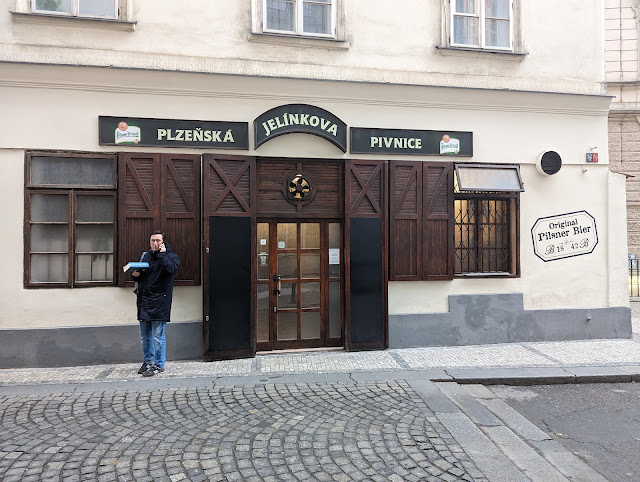 The front room has the tap and and standing bar and around the back is a room with a half dozen tables. 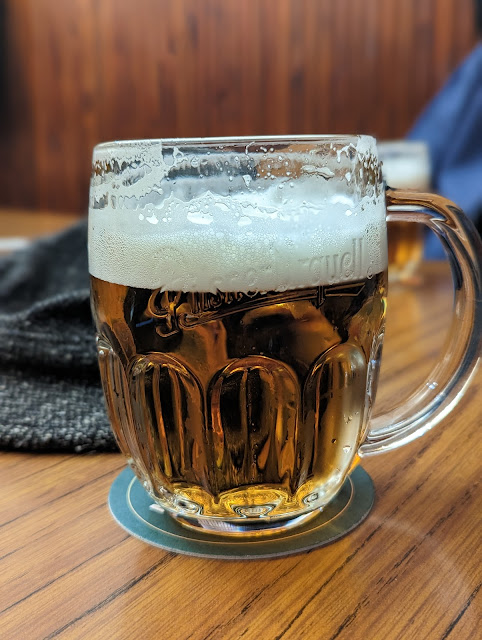 A local friend said they had the reputation for the freshest Urquell in town. There are times when I seem to be super sensitive to diacetyl and the tankovna Pilsener Urquell at places like Lokál were practicably undrinkable. But at Jelinkova I've never had that problem. 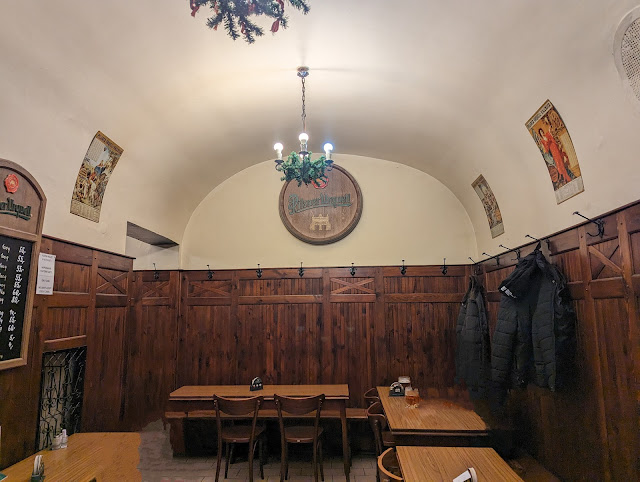 They keep track of the bill the old fashioned way, on. a strip of paper. Much easier when you only serve one beer. 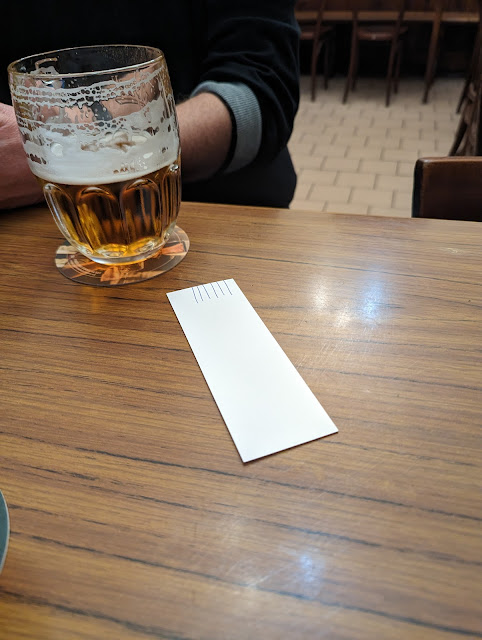 We. were all enjoying it so much, we had a mother. Much like the first (only this time I took a picture before I drank some) 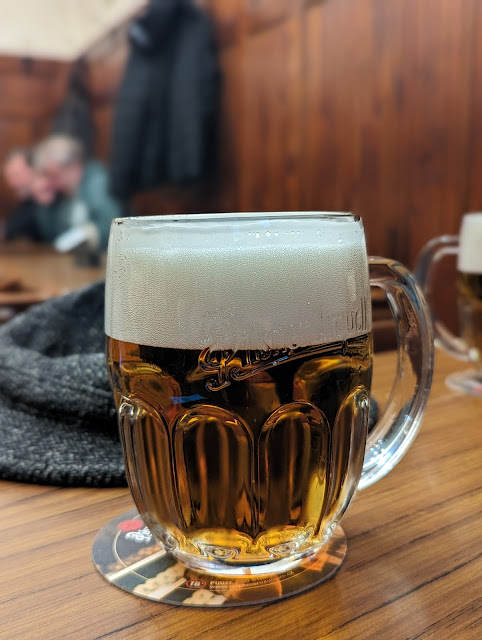 There is no hot food at Jenikova, only the traditional cold bar snacks, so we went back and hopped on the tram and soon were at U Šumavy. 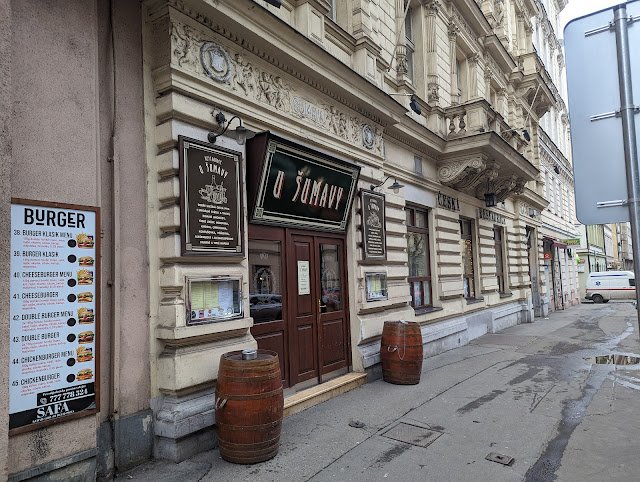 As in Jelinkova the front room has the taps and a standing bar. A bit more taps here. 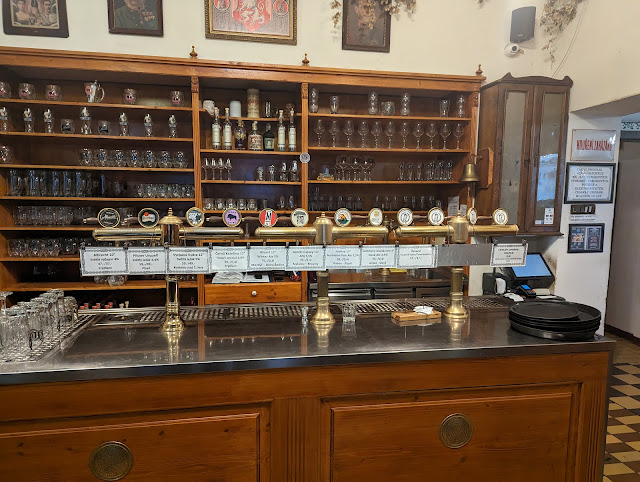 The main lunch room is to the right but it was full. We were directed to the back where they had some larger tables. I ordered the Albrecht 10º 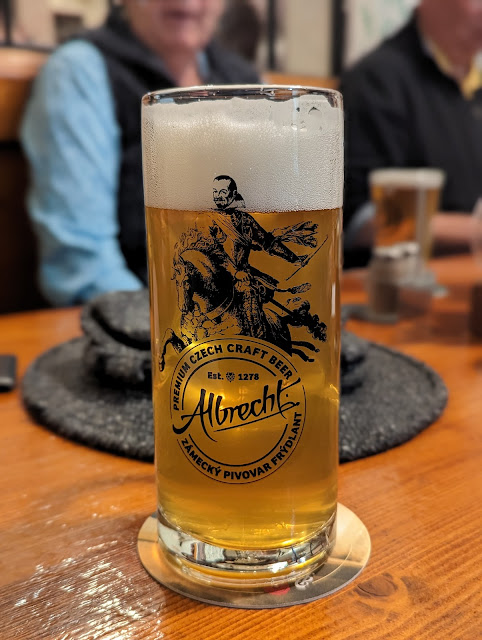 A good selection of beers on tap, which is what I expect here. 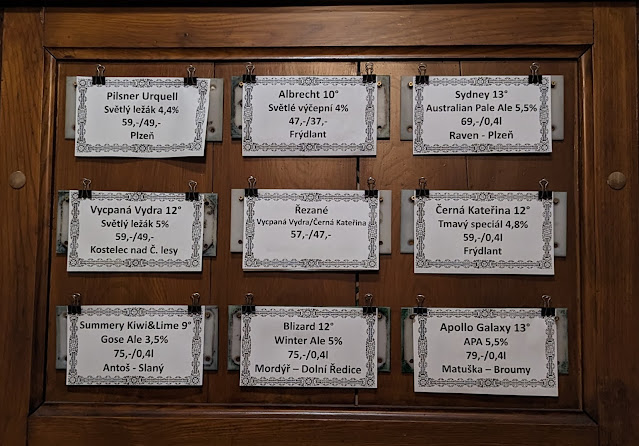 We all ordered lunch. The English menu said this was Baked Pasta -- which it was but it was not what I expected. I was sort of like my Mom's tuna casserole except with chicken. It was good but a bit dry. 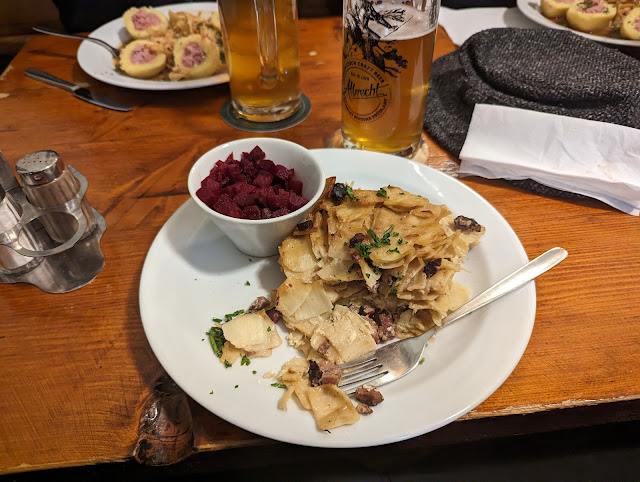 Around the corner and across the street is the place now know as Pivovarský dům Benedict. 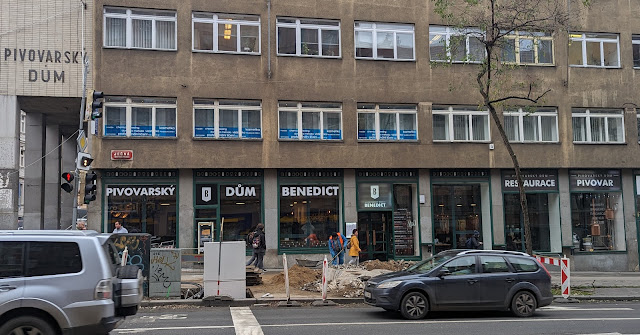 It was one of the original brewpubs it was bought earlier this year by Břevnovský klášterní pivovar, which sells their beers under the name Benedict.
I ordered the Benedict 12º, which usually is one of my favorite beers in Prague, but this one had a bit more diacetyl han I like. It was drinkable, just not as enjoyable as it usually is. 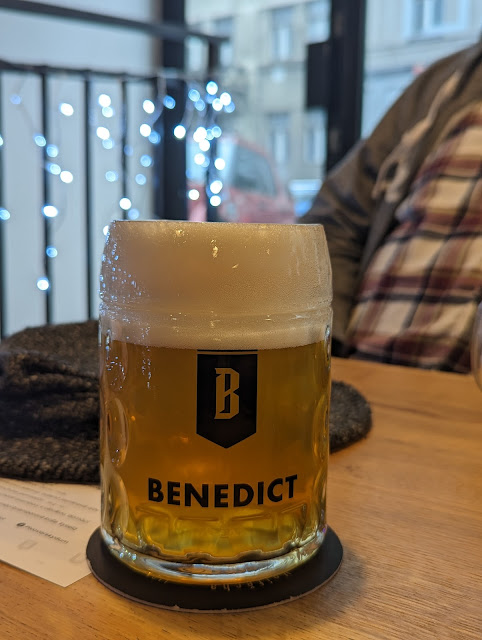 The beers they were serving were all brewed at Břevnovský and are part of their standard range (except for the Advent beer, which is a seasonal). If Google translate was correct a couple of beers brewed on brewpub system we coming online soon. The press release they posted said season and special beers would be brewed at the brewpub.
A noteL they use the more old fashion notation. My Benedict 12º is listed as Benedict 12%. That causes some confusion as people say "wow, I had the 15% abv IPA in Prague). The 12% refers to the wort before before fermentation as 12% sugar. The more modern was is 12º Plato 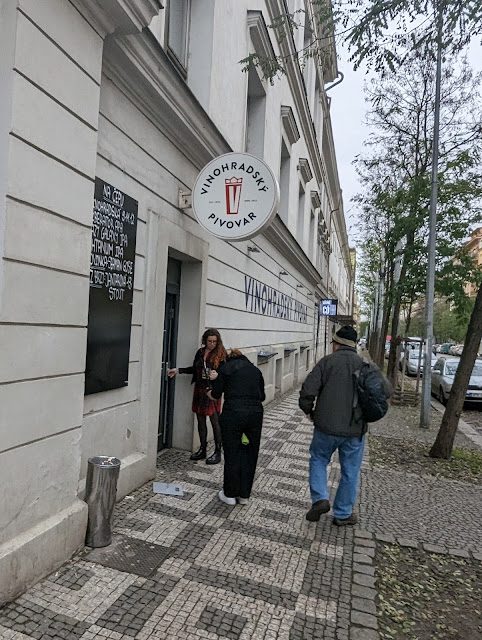 This is another of my favorite places in Prague.Their Vinohradská 11º is maybe my favorite beer in Prague not brewed by Hostomice. However I started off with their  Vinohradská 9º výčepní pivo, which just means "draft beer" but due the vagaries of Czech beer laws, you can't call a beer ležák unless it is at least 11º starting gravity. But whatever you call it, it was delicious. 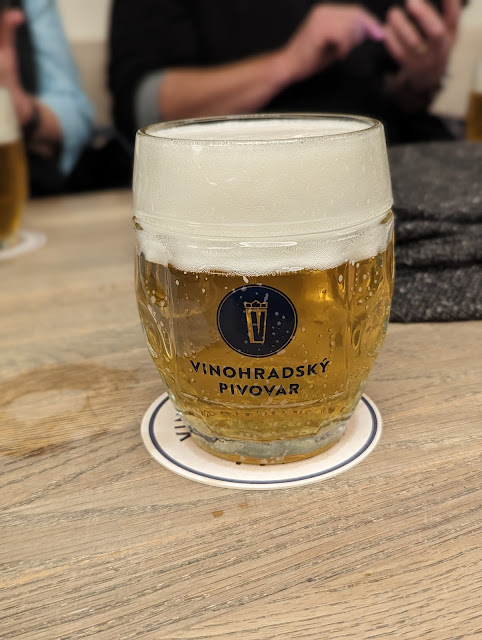 They had 7 beer on tap today 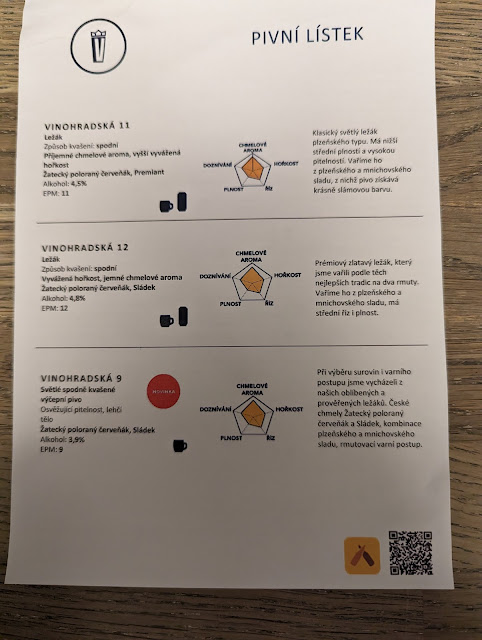 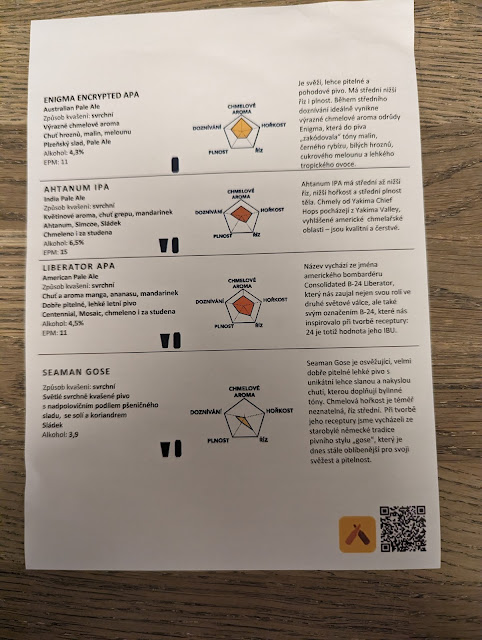 Next I had the Vinohradská 11º. I think I liked it better than the 9º but it was a close run thing. On another day it might have gone the other way... 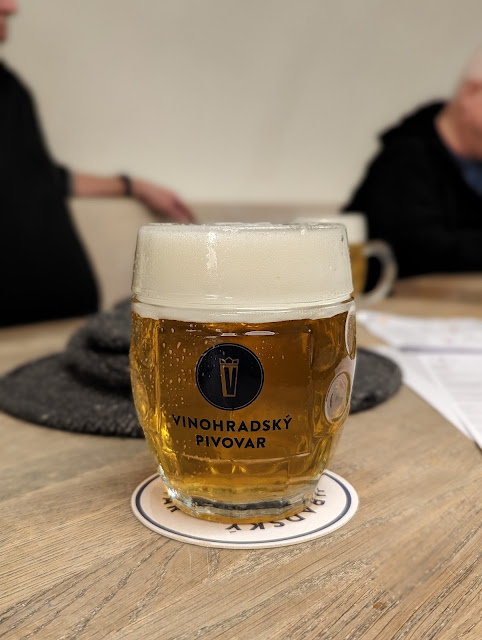 I had a couple other possible stops planned for next. Two of them had beer lists online and there wasn't much that got people excited, mostly pastry stouts, fruity sours and various forms of IPA's. I had more hope for a third place but as we walked by you could see about 3/4 of their beer list from the window.l Names like "Commander Tom's Magic Juice" (not the real name) didn't generate any interest.
So we headed to OSSEG. 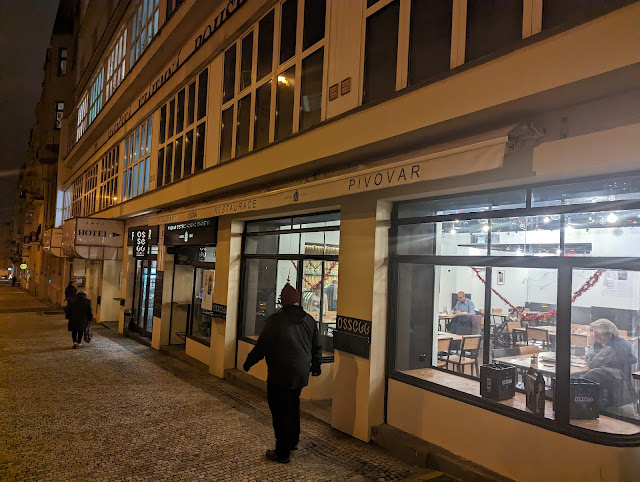 I ordered my usual Philipp 12º and while it was nice, I think it has been better in the past. 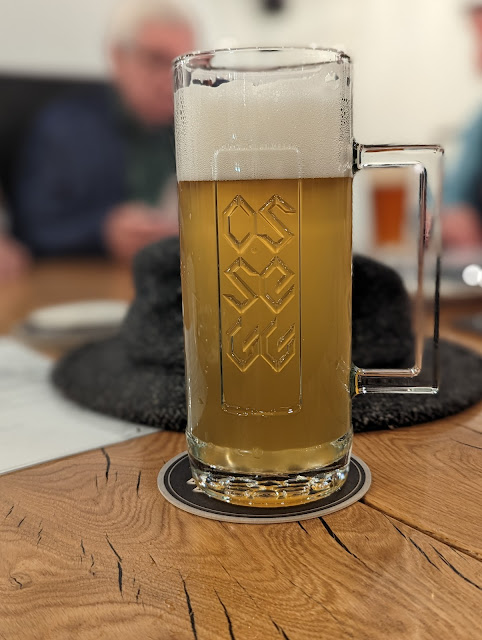 We ordered dinner but the food took so long to come we really weren't interested in another beer there. So we decided to call it a night. Some were off to visit Christmas Markets, others to rest our weary feet.