We gathered a Spezial for lunch and a beer or two. I started off with the U 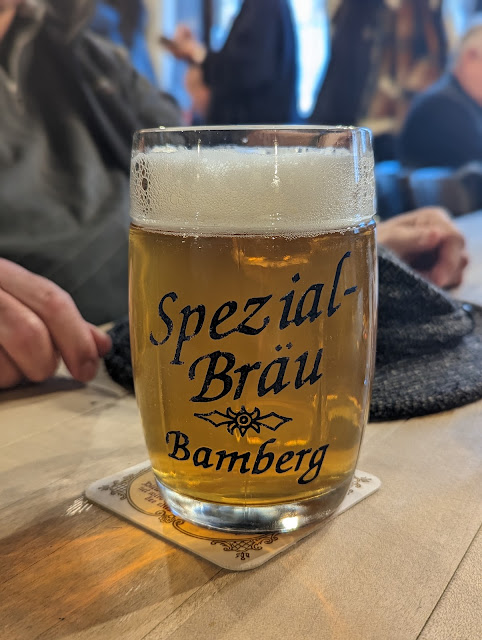 This is a really good beer that gets overshadowed by its more famous sibling, Anyplace else it would be a flagship beer.
Lunch was bratwurst wit sauerkraut. It seemed appropriate. 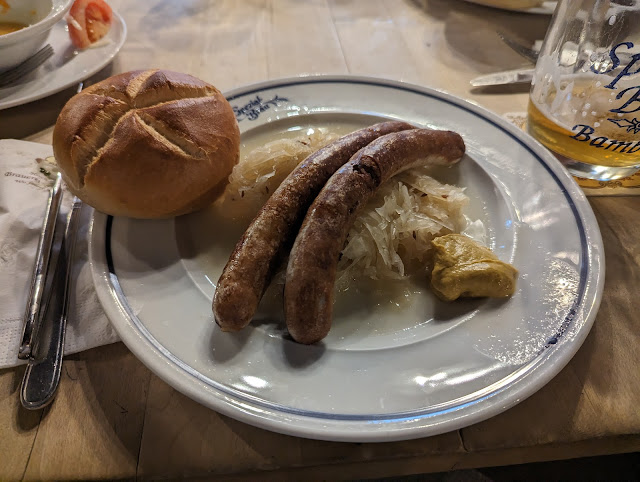 Desert was a seidla of Lagerbier. I wouldn't want to cause jealousy in the family. 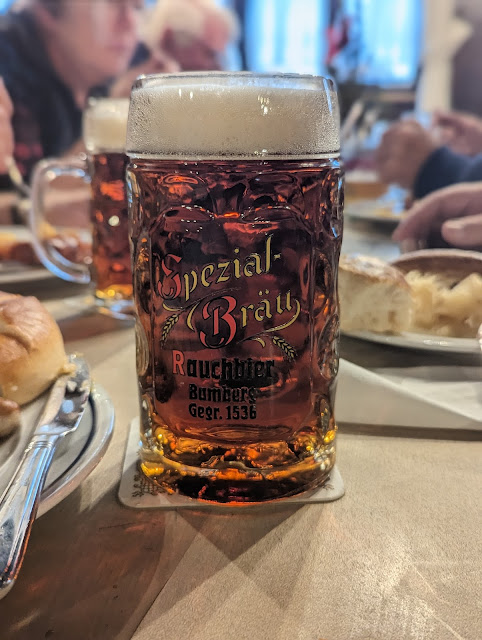 We walked across the street to Fässla. I think they have been the victim of their own success -- they brew more than than their brewhouse really supports, so sometimes the beers are served too soon, My favorite of their two draft beers is the Gold Pils. 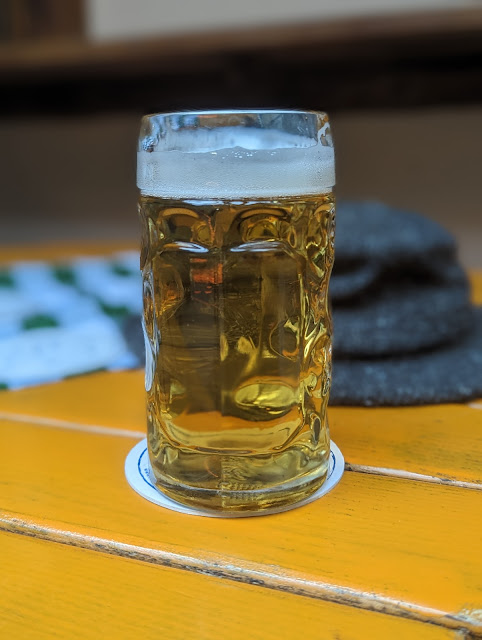 It was fine, perfectly drinkable but not so interesting that I wanted another. The others had the Lagerbier (Helles) and thought the same, so we moved on.
Up until the 50's Brauerei Einhorn ("Unicorn") sat at the end of Sandstrasse. Eventually the brewery merged with another and by the 70's all that was left was the brewery sign. When I first started coming to Bamberg it was a night club called "Nelson Lounge" and served Paulaner beer (from Munich!). It lay vacant for many years and then reopened as a pub/restaurant "Ahörnla" -- Franconia dialect for "Little Unicorn") 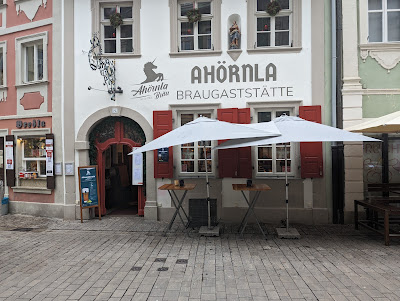 They served beers brewed for them (I believe by Mahrs) and restore the interior. 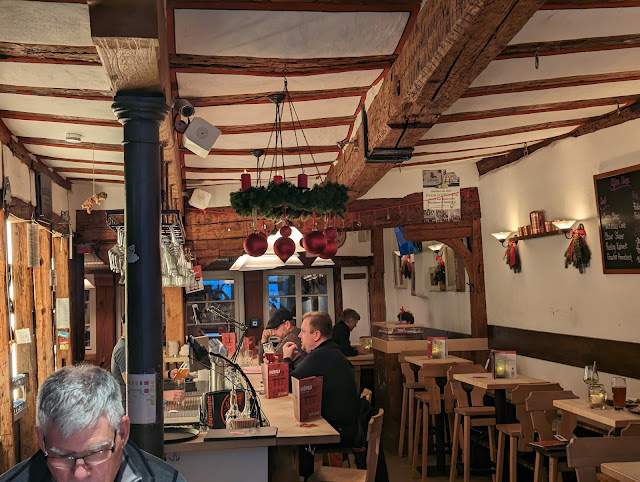 A year or so ago they installed a brewery and started brewing their own beers. 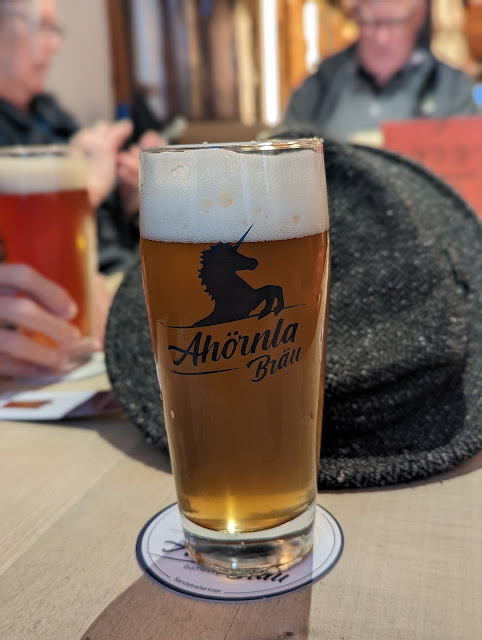 This is their Hell and was a good beer -- not the best in town but not the worst. They also had an Advent beer which was spiced with nutmeg and clove and probably some other spices. A full seidla of that would be too much for me.

We had some time to kill before our dinner reservations at Schlenkerla, but we stopped in for an early beer. 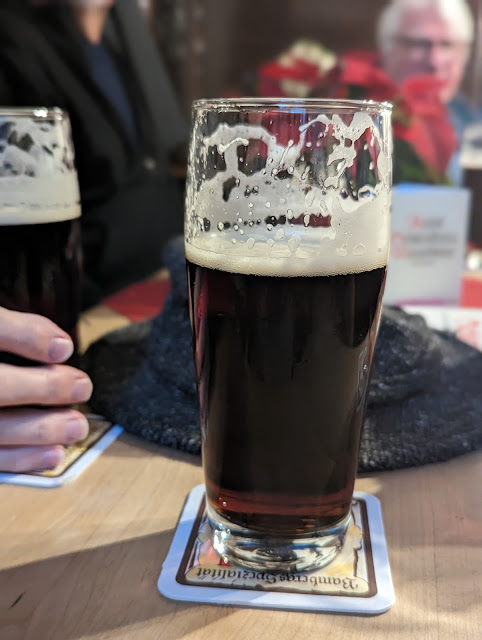 The Märzen was in fine form and the Eiche (the Doublebock made with oak smoked malt) was tasty also. Much smother than I remembered from 6 years ago.
The tables for our dinner reservation were free so we moved there and soon they brought out our keg of Ur Bock, Six years ago they had me tap, which was a mistake, This time they had one of their veteran tappers to the honors. 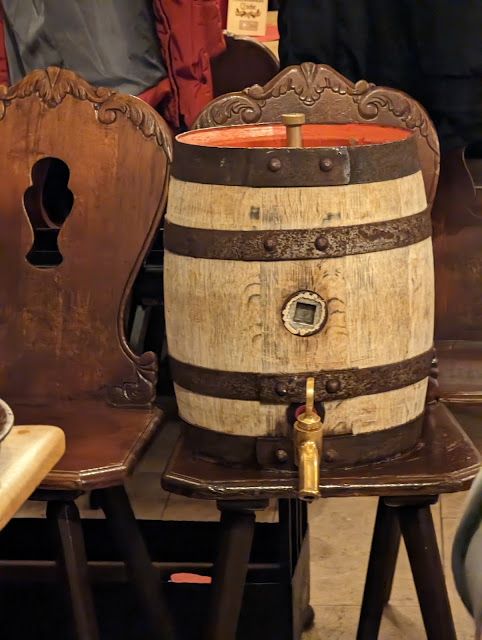 The Ur Bock has its own glass, so they brought out a tray of those. 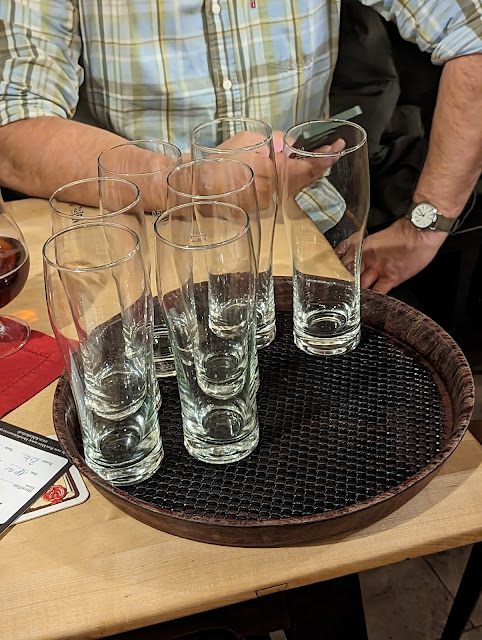 Some locals had warned us that they had found it a bit sweet,  It definitely was malty but for me it didn't cross the line to "sweet."  Nice and smoky and notably stronger in alcohol, One of the better ones of recent years, I'd say. 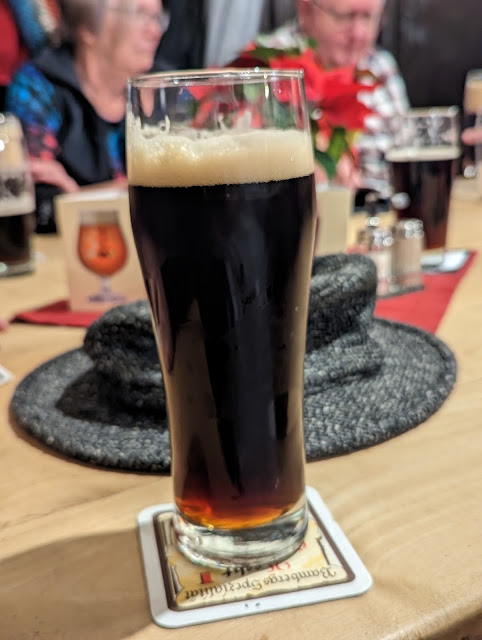 We all ordered the famous Bamberg Onion for dinner. It just seemed the right thing to do. 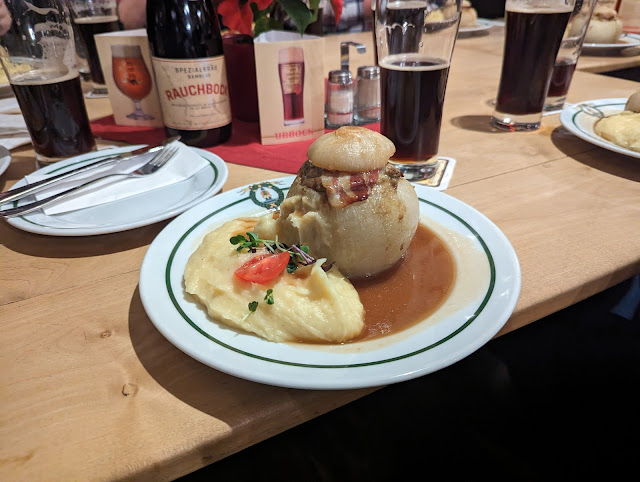 We tried hard, but we actually didn't finish all 15 liters. Maybe a liter or two was left. So we failed in our basic task.
Posted by The Mad Brewer at 12:44 AM

I've watched the Fass Anstich many times, specially in Schenkerla. Having tapped hundreds of British casks, I was always amazed at how easy the Franken version is. I'd love to have had a go but could never persuade anyone to let me. Don't be ashamed Fred, I've watched many 'professionals' in Schenkerla make a mess of it!