A few years ago a new Altbier appeared at my local beer shop: Schwelmer Alt from Brauerei Schwelm. It was a decent enough alt -- no Uerige, but that's no shame because most alts aren't.

When I decided to visit Wuppertal I looked at nearby towns to see if there were any other breweries around to visit. Two or three birds with one stone, as it were. Schwelm showed up as the next stop on one of the trains from Düsseldorf to Wuppertal, so I decided check it out.

The brewery used to be owned by the megabrewer Veltins and it was slated to be closed. A man by the name of Dr. Lohbeck bought the brewery and has continued the brewing tradtion dating back to 1830.

I knew it was a quite large brewery and that there is no tap room there, but there is a pub just down the street that is the "unoffical" tap room so I figured it was worth the time to check it out.

After arriving at the train station it was a pleasant 10 minute walk to brewery. Not really much to see, except they do like red paint. 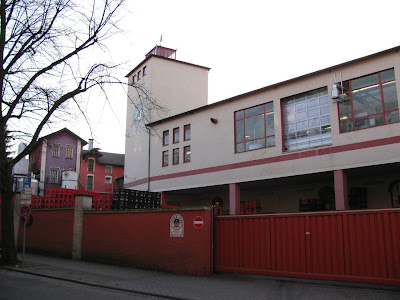 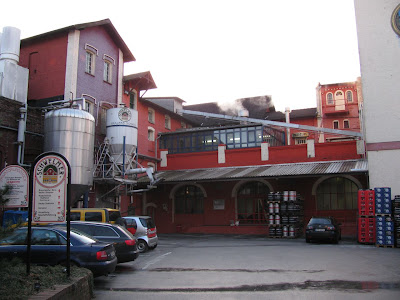 Around the corner and down a block or so is the Braustübchen. 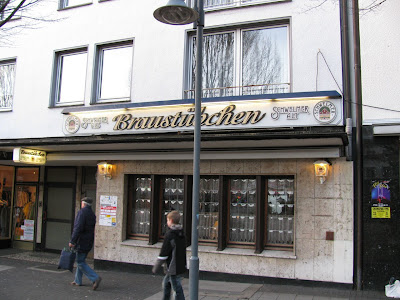 The first bad sign was literally a sign on the door -- think of the international sign for "no smoking" and remove the diagonal line. I think it means "smoking required" because everybody inside, including the bar maid, was chain smoking. The German state of North Rhine-Westfalia as an exemption in their no-smoking law for small, single room pubs that don't serve food. And that is what we were in.

They had two Schwelmer beers on draft, an alt and a pils. The alt was how I remembered the bottled version only better because it was fresh. Not much bitterness, a little on the sweet side but not so much that you couldn't drink a bunch of them if you wanted. The pils was also hop-deprived and suffered for it. There wasn't really any malt there as well so the primary taste sensation was "wet"

The pub itself was nice -- it had a late 60's early 70's vibe and looked like a place were you could spend a pleasant afternoon drinking beer and chatting with the locals. But the smoke was overpowering. There were only about five or six other people, but they were smoking non-stop and there wasn't much ventatlation. The two beers were small (.2 liter) so they were quickly drained and it was off to the train station to return to Düsseldorf and a few final Uerige.

Along the way, I noticed another place -- Altdeutsche Bierstuben -- that served the Schwelber beers. It is a hotel resturant and has a biergarten in the back so it's likely it is a less smokey place to drink. If I ever return to Schwelm, I'll do my drinking there. 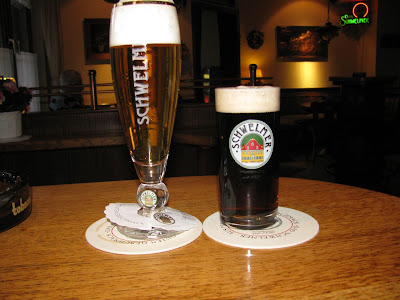 Schwelmer Pils and Alt
Posted by The Mad Brewer at 9:47 PM