Brit Beers on the Patio

Sometimes, when you can't travel to the beers, the beers have to come to you.

When in Belgium last month, we traded some beers bought in Bamberg to the Black Haddock for some British Winter Warmers. And a member of our homebrewing club, Mike Steinberg, has in-laws in Britain who always bring him beers when the come to visit, so on New Years Day he brought his (quite large) stash over to share. Tom Rierson and Luis DiStefano were there as well, as they helped carry the beers from Bamberg and from Belgium. 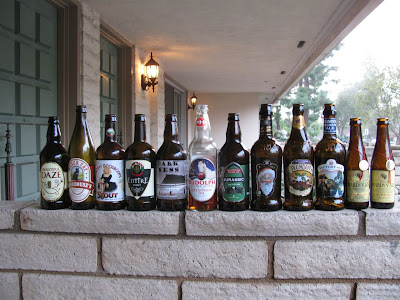 Brit Beers on the Patio

We sorted them roughly by alcohol, which means we started out with some older, lower gravity beers. There was some concern they might not have held up (they were all at least a year old, probably two in most cases) but they held up very well, which attests to the skill of the brewers (and the quality of the bottling line :) )

The beers in order (* means it was from the Black Haddock):

Moorhouse, Black Cat, 3.4% -- a beer I've often had at the Great British Beer Festival but this was the first time in the bottle.

Wye Valley Brewery, Dorthy Goodbody's Stout, 4.6% -- another one I've had on cask at the GBBF. Won the label contest, hands down.

*Whitehorse Brewery, Rudolf the Red Nosed, 4.8% -- the first of the new beers. We were a little disapointed, but that probably was due more to its placement after some darker, richer beers. There was nothing wrong, just seemed a little un-interesting.

*Bateman's Rosy Nosey, 4.9%. The second of our winter warmers. Very nice, fairly hoppy for a Brit Beer and a nice 'cracker' hint to the malt profile. Tag line says "Compliments any Turkey" but it didn't say anything to the turkey's at the tasting table :)

*Wychwood Brewery, Plumduff, 5.0%. A very interesting beer, brewed with spices and primed with plum juice. There was a definite non-estery fruitiness, but we wouldn't have made it out to be plum without reading the label. A split decision here -- I like it a lot but others thought it was a bit too strange.

*Bateman's Victory Ale, 6.0%. An old favorite that I haven't had in the bottle for a long time. We used to be able to get it in LA but I haven't seen it in a while. For me, my favorite of the tasting so far.

Mike still had about 10 beers left, but everybody was ready to quit so we adjourned for another day.
Posted by The Mad Brewer at 12:16 PM

Email ThisBlogThis!Share to TwitterShare to FacebookShare to Pinterest
Labels: Local