Birrificio Baladin's distribution chief Franco "Cico" Faranelli is at the Fossano station to transport Lorenzo and ourselves to the snow-covered village of Piozzo some 8 km out of town, driving those winding curves like, well, an Italian driver.

On the town square and occupying what was once half of the town hall, Casa Baladin is a 5-room hotel, top-flight restaurant, performance/music/play room with an Internet loft stocked with classic comics and books and a retail shop. Oh yeah, and there is a Turkish bath too. Pan-ethnic decor and modern furnishings co-exist artfully on the exposed brick walls of the structure.

It is like a Disneyland for adults. The master chef (whose name I forget at the moment) takes us on a tour of the guest rooms so we can choose which to stay in as we are the only guests this evening. We pick the African room, done in that style of design, while Lorenzo chooses the Barbie room, a more arts 'n kitsch affair, including the namesake doll.

Soon, the brewer-sommelier-designer-musician-entrepreneur-and-all-around-Renaissance man Teo Musso, who designed all of this and built much of it himself, appears. He plays a mix of bossa nova and American pop/jazz on his incredible sound system as we are introduced. As Teo's English is limited, Lorenzo acts as translator.

Soon, we are whisked across the square to the separate Baladin brewpub for a sampler of 6 of their tap brews, including the draught-only Chiara (a dry and fruity blond) and Nina (hoppy pale ale), as well as the only-draught-at-Xmastime Nöel, spicy and warming.

Before I could even finish all the tasters, we are escorted back to Casa Baladin's dining room for an amazing 9-course meal and beer pairing prepared just for us guests as well as Teo, Chico and
Baladin's marketing guy (again, forget name), who looks like and reminds me of my LA friend Mike Kunkes. 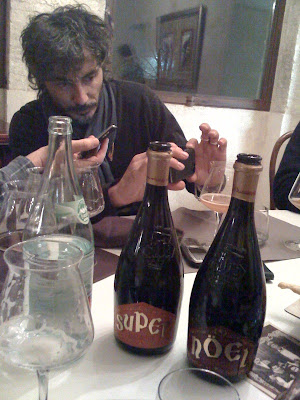 Teo enjoys photographing beer with his iPhone too

For course-by-course details, you'll have to read the inevitable Celebrator article, but among the highlights were: Sakura, a salad of Japanese greens in vermouth with tuna fish, oil and spices -- accompanied by Baladin Wayan (named after Teo's daughter), a ginseng and pepper-spiced Saison; and Capraino, sour goat cheese wrapped in chocolate and served in blueberry sauce with drops of olive oil -- served with X Fumé, Baladin's aged and purposely oxidized Xyauyú strong ale that was spiced with smoked tea from China.

We all talked, ate and drank till after 11 pm, and I was so full (from one of the best meals I've had in a long time, let alone on this trip), that I declined an invitation to return to the pub, so we went upstairs to Africa to crash. And slept like tribesmen after a mystical meal. 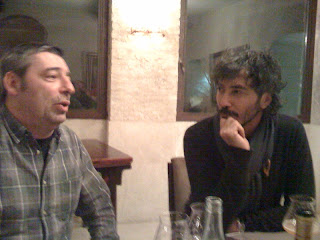