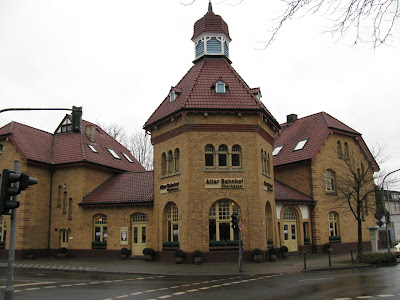 Brauhaus Alter Bahnhof, Oberkassel
This is in a former streetcar station across the Rhine from the Altstadt. In former days it was a brewpub owned by the same family that owned Brauerei zum Schlüssel and the Gatzweiler Brewery (which was later sold to Carlsberg). Over the years it has opened and closed under a number of different names. I think the last time they were actually brewing there it was as "Gatz Brauhaus."

Every few years I take the U-bahn (except it's a tram once it leaves the Altstadt) over and see what is happening. The place has always been closed, but from time to time there were signs of activity. Don't know if it was the dregs of the last place or the next place getting ready. In any case, there was no beer so I quickly lost interest.

Today when I stepped off the tram there were signs of life. The lights were on, I could see people sitting at tables and a sign that said "Brauhaus Alter Bahnoff." My pulse started to quicken, my mouth got dry anticipating that first taste of a new beer -- but my hopes were cruelly dashed. The menu in the window said "Schumacher Alt, Krombacher Pils, Schneider Weisse."

Now there is nothing wrong with Schumacher Alt, but I don't need to take a tram across town to drink it when it is closer to go to the brewery on Oststrasse or the "Im Goldenen Kessel" taproom in the Altstadt. To give them credit, the Schumacher was served the proper way, via gravity feed from a barrel. At noon on a Sunday it was a little 5 liter barrel, but it was a barrel. 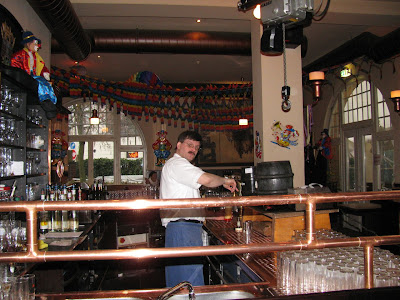 The bar (this is a 10 liter barrel that went up later)
Since I had come this far (all of a 10 minute tram ride) I had a couple glasses of Schumacher and a Strammer Max (open faced ham and fried egg sandwich) and headed back to the Altstadt.

The mash tun is still there, but it is now decorated with clowns. The brew kettle used to be next it but that is now gone. The new owners have upgraded the place a bit -- the last time I was inside I remember it being a bit run down. 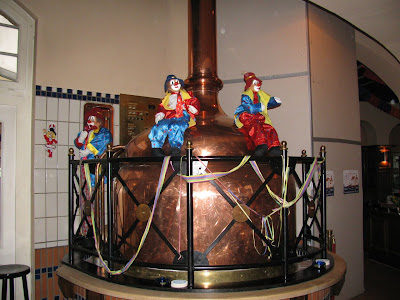 Good use for mash tun?
Posted by The Mad Brewer at 3:35 AM