If you take the high speed ICE train from Frankfurt to Düsseldorf, the train sometime stops in Siegburg/Bonn. The other times in passes thru at a high rate of speed. Nevertheless, as a town that I visited -- in a most fleeting way -- I was interested to discover that it had a brewery.

About .75 km from the Siegburg train station, along a pedestrian shopping street is the Siegburg Brauhaus (also known as Seigburger Abteibrauerei after the Abbey in town) 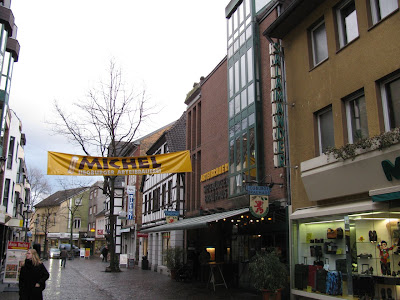 Siegburger Brauhaus
It is a typical modern German brewpub and except for the decor, not that different from a typical American brewpub. The brew house is the middle of the room, open for all to see and from the smell of boiling malt lingering in the air, they had brewed earlier in the day. 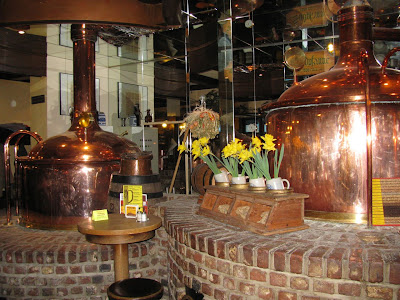 The brew house
They have three beers on draft -- Michel, a Kölsch style ale; Siegburger, an amber lager; and a seasonal, which was a schwartzbier today. 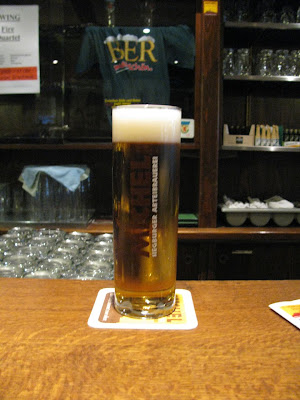 Michel, a Kölsch style ale
The Michel was very Kölsch-like. It was less bitter than the Cologne examples I like, but very drinkable. However, it is not such an outstanding version that I'd travel past Cologne to drink it on a regular basis. 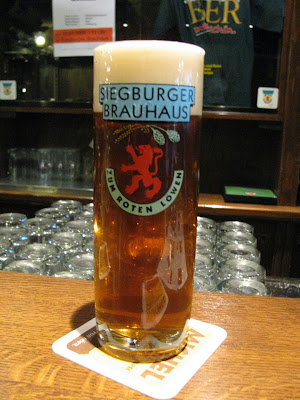 It may be hard to tell from the picture but the Siegburger is unfiltered, which is a good start in my book. If it had been more attenuated it would be a nice Märzen style beer, but as with the Troisberger at the last brewery, there was a little bit too much residual sweetness. 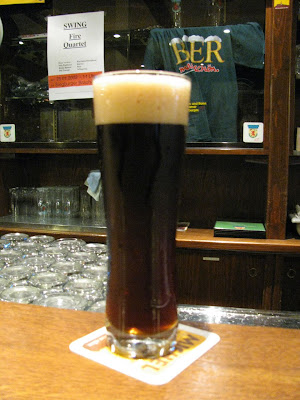 Seiburger Schwarzbier
Thier seasonal beer for January and February is Schwarzbier or "black beer." This one wasn't all that black, not really all that much darker than a typical Bavarian Dunkel. There was a nice roasty taste to it, but again, it would have been a much better beer if it had been drier and not so sweet in the finish. Of the three, though, it would be the one I'd order again.

Just as I was getting ready to leave, I noticed a sign behind the bar "Happy Hour 4-6pm" For €1 you could get small glass (.2 liter, same as a Kölsch glass) of any of the beers. I thought about staying but it had been a long day and I had a ways to go to get back to Düsseldorf.

Hey wake stike boy, You never taake us anywhere when we go to dusseldorf, put this on the next stike trip.

Hey wake stike boy, You never take us anywhere when we go to dusseldorf, put this on the next stike trip.