We wisely choose the Hotel Bologna right across from Torino's Porto Nuevo train station for our 2-night stay, as moving around Italy whilst lugging beer is getting tiresome.

A few hours of relaxation and catching up on some year-end news on CNN Int'l in the room before heading out to ring out the old.

Freezing temps and the return of snow flurries greet us on the street, but before long we have cabbed to La Piazza dei Mestieri, a compound/school for disadvantaged teens, who are taught crafts and skills -- one of which is brewing beer.

The organization's GM, Enrique Jiménez, a Spainard who speaks fluent English, introduces us to master brewer Sergio Orema, who speaks hardly any at all. Sergio teaches the students at the small brewing facility in the pub, as well as runs the respected birrificio, Grado Plato, in nearby Chieri.

We sit down in a quiet corner for some talk and beer sampling -- and before long, Cuban waiter Felipe is bringing us plates of antipasto.

We sample 2 draughts: Manet, a tasty, 5% kölsch style, that is curiously unfiltered, and Renoir, a quite good ESB at about 5.5 that nicely shows off its Maris Otter and crystal malt profile. These 2 beers were brewed and kegged or bottled by students under Sergio's tutelage.

Grado Plato birra is also on our tasting list, as Sergio pours draughts of Sveva, a 4.5% hoppy and dry lager made with Hallertauer hops; Spoon River, a well-balanced US-style red ale made with Amarillo and Cascade hops; Sticher, a hoppy alt-style inspired by Düsseldorf brewery Uriege's Sticke alt; and Kukumerla, a sweet 10% Birra de Natale made with a Belgian yeast.

By that's not all. From bottles we have Strada S. Felice, an 8% beer made with chestnuts, and the famed 7% Chocarrubica, brewed with carob and cocoa (the only 2 available in the US). 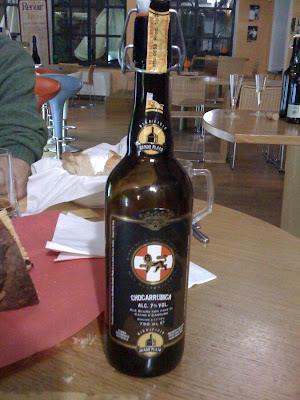 At the stroke of midnight, there were fireworks and firecrackers going on out in the streets, while the party goers who were not beer geeks danced to the Macarena, disco hits and the Chicken Dance (sung in Italian), spun by the pub's DJ. But we got a tour of the school's micro brewery, including new fermenters and a kegging and bottling operation.

After a final toast and some pannecotta cake for desert, we wished our hosts a Buon Ano Nuevo and extended grazie mille.

And Enrique was kind enough to drop us at our hotel en route home. Quite the memorable New Year's Eve, all day long. 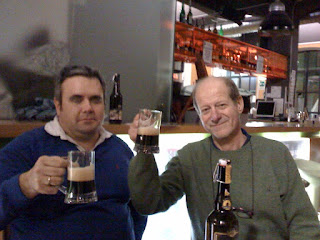