The tradional beer in the area around Düsseldorf is called Altbier -- the literal translation is "old beer." It is a top fermented beer ("ale") as opposed to the newer bottom fermented beers ("lagers") for which Germany is most known.

Within Düsseldorf are four small(ish) breweries that still produce this beer. My favorite of the four is zum Uerige. Unlike most American brewpubs, they basically brew only beer. They have an old tradition of occasionally brewing a stronger version that is served in place of the normal beer. The price is the same -- it is sort of a "thank you" for regular customers. This special brew was brewed perioidically and not advertised in advance. The word "Sticke" is the local dialect for "secret." The only way you knew it was coming was the day before they'd post a sign that says "tomorrow Sticke" (it actually says "morje Sticke" which is the local dialect again.) 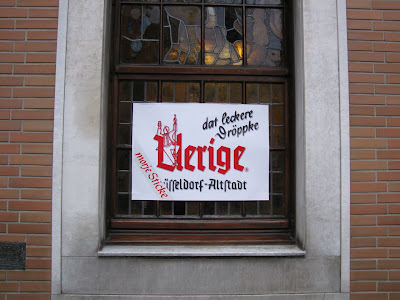 When the day comes, the "morje Sticke" becomes "hütt Sticke" or "today Sticke." 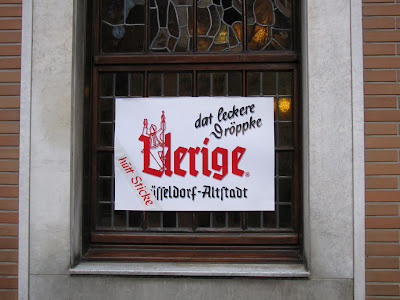 The three other breweries do something similar. Brauerei Schumacher produces what they call "Latzenbier" three times a year, while Brauerei zum Schlüssel does a "Stike" in later October. The third brewery, Brauerei im Füchschen brews a Christmas beer. It is available in bottles during the month of December but only on draft on Christmas Eve. Needless to say, that's not one I've had or am likely to. The principal is the same for all of these: they are stronger (6-7% instead of around 5%) and are served for only a day (or until they run out) at the same price as the regular beer.

And in closing, a picture of one of the three "serving stations" -- I'd call it a bar except there is no to sit to stand -- at Uerige. They go thru an amazing amount of beer each day. 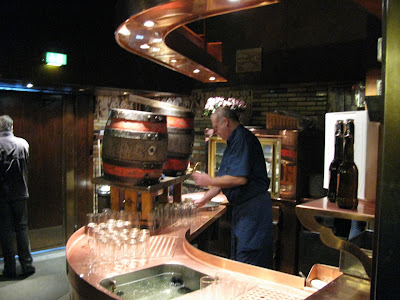 Heaven, one glass at a time
Posted by The Mad Brewer at 1:55 AM