Before I headed off to Bonn and parts south to investigate the bastard nephews of Kölsch, I stopped in at a big department store in Düsseldorf, the Carsch Haus. I wasn't shopping for anything -- in the basement they have a food court with a "mini-Uerige." This little stand opens when the department store opens -- 9:30 -- a half an hour before the brewery on Burgerstrasse opens. It is also convient to the subway station if you are headed for the train station, as I was. 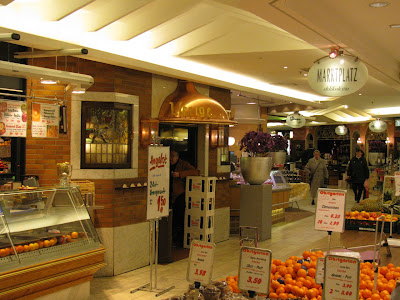 Uerige at the Carsch Haus
The marque over the door is from a mash tun they used in the 50's -- it is amazing how small it is. Inside they serve Uerige from wooden barrels just as they do at the brewery. It is not unusual to see a couple come, have a beer and then one goes off shopping while the other stays for another beer or three. Usually, but not always, the husband stays -- Hey, this is Düsseldorf where you're just as likely to see a group of women drinking at the brewery as men. 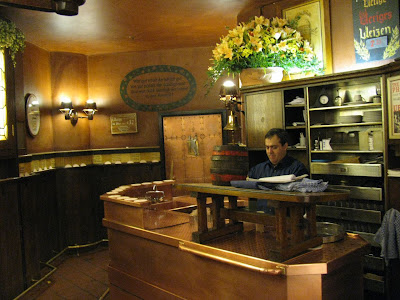 Inside Uerige Carsch Haus
Then it was off to the train station to catch my train to Bonn. It is about an hour away, passed Cologne.

Brauhaus Bönnsch is not far from the train station, in about 10 minutes I was there. Unfortunately I was too early -- they weren't open yet. Well, Bonn is known for a few other things other than Bönnsch, one if which is the birthplace of Beethoven. The Beethoven Haus is about 300m from the Brauhaus, so I wondered down. 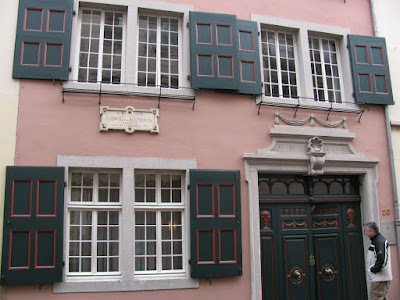 The museum was open and I stuck my head in, but there was an admission fee and they didn't serve any beer, so I went back to the brewery. 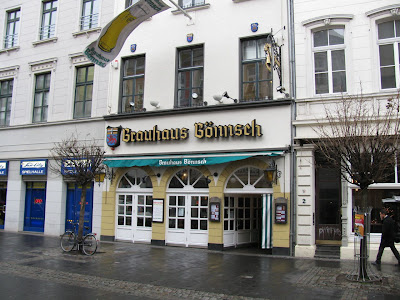 My destination in Bonn

Since they had just opened, I was the first one there. It turns out whomever was on duty the night before hadn't drained the beer line, so it took a couple minutes for the beer to come, but it was worth the wait. The Bönnsch is perhaps most famous for its beer glass -- it is the same size as a Kölsch stange -- .2 liter -- but it is angled and has what looks like a pistol hand the side. 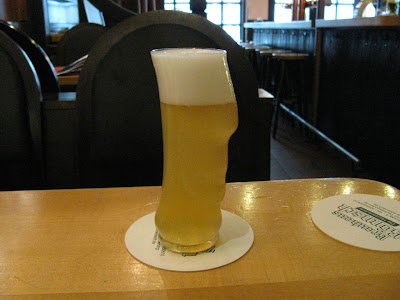 The beer is very much in style of a Kölsch but unfiltered. It is very, very drinkable, and with the added benefit of an easy to grip glass, I can see one consuming mass quantities. I generally like unfiltered beers -- they somehow taste "fresher" to me. If Bonn was closer to Düsseldorf than Cologne, I definitely drink Bönnsch over most Kölsch.

The also have a wheat beer. In the interests of science, I tried one. It was a very nice wheat beer but nothing worth an hour train ride. The Bönsch was much more interesting, so I had a couple more. Hey, they are served in small glasses.

I come from a mathematical family, so as I headed back to the train station, I happen to notice and plaque and had to take this picture: 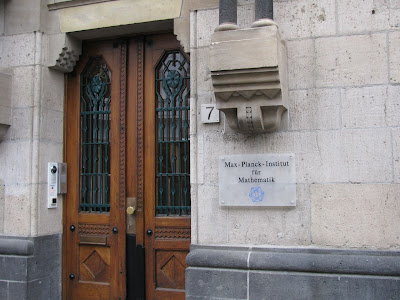 I also passed the ZOB -- Central Bus Station or "Zone of Bus" as I call it, and saw there was a bus directly to Troisdorf, my next stop. It takes about 20 minutes longer than the train, but with the train I have to change at least once and so decided to take the bus.