The last day of the year, and I can't think of a better place to wake up in than Casa Baladin, overlooking the snow-covered town.

After a light breakfast of Chinese tea (did I mention that Teo collects exotic tea?), bread, biscuits and pumpkin marmalade, Teo, Lorenzo, Danise and I are off to visit the current Baladin brewery, just down the street and next door to his parents' house, where he was born. We get a taste from the fermenter of a 2-months-young Xyauyú (that still has 22 months to go before it will be bottled) that is already impressive.

Then it's off to the new, larger facility down the hill from town. Aside from housing a much bigger brewery and aging rooms, it also includes offices and areas dedicated to Baladin's other ventures, including distributing its own olive oil, pomodoro sauce and pasta. And, of course a music room. Plus plenty of space for expansion.

The new facility is due to open in March, and will be celebrated with a group brew with Italy's top brewers, as well as the introduction of a new Baladin birra, rumored to be made with American hops (look for details in an upcoming Celebrator).

There, Cico joins us and we drive to nearby Mondovi, where we lunch at MondooF (a combination of Mondo and Food, the latter spelt backward) on a delicious pasta and artichoke dish, complemented nicely by a bottle of Baladin Nora, the spicy beer made with gamut and myrrh -- and barely any hops -- and named after Teo's ex-wife.

Back to the room to collect our things, and then Cico and Lorenzo drop us off at Stazione Fossano, from which we'll continue on to the next leg of our journey: Torino, about an hour away.

But not before Lorenzo makes a cellphone call and gets us invited to the New Year's Eve party at the birrificio/pub at Piazza dei Mestieri in Torino tonight.

Hopefully, we will see Lorenzo, Cico and Teo at a US beer event in the coming year. 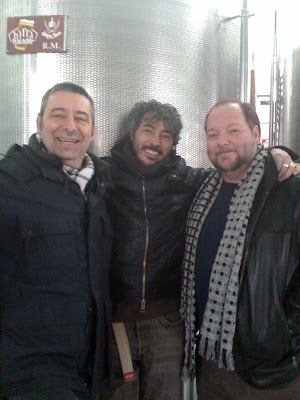 Lorenzo, Teo and yours truly in front of one of the fermenters at the new Baladin brewery.
More to come...

Submitted by Tomm Carroll
Posted by The Mad Brewer at 12:22 PM