Farewell to Florence as we depart for our much anticipated visit to Casa Baladin, the hotel/guesthouse across the street from the Baladin pub, down the street from the Birrificio Baladin (soon to move to much larger facilities down the hill and almost outta town) in the tiny,
Northern Italian village of Piozzo. Baladin, of course, and it's brewmaster/reniassance man Teo Musso, are at the forefront of the Birra Artiginale Italiana movement that is starting to make itself known in the world of craft beer.

But first, we have a rather uneventful, somewhat relaxing ride on Trenitalia (Italian Rail): 6 hours, 3 trains, 2 adventurously thirsty passengers and 1 goal -- Baladin. 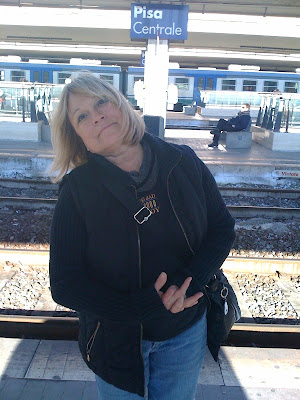 In fact, the highlights amounted to changing trains in Pisa (their brewpub, Orzobruno was not open until evening, so we didn't visit, thereby precluding a look at the leaning tower), drinking my first taste of La Trappe Witbier (the only Trappist wit/blanche, and much clovier than expected) en route, from our Firenze stash... 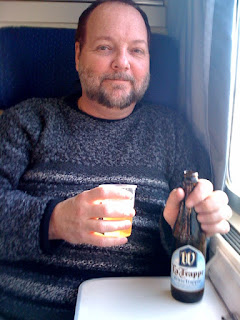 ...training thru Genoa and other sunny seaside towns (wishing we had rent a car to drive to iozzo), and then the overcast, snow-covered hills of the Piedmont region (gratefull we had NOT rented a car) and, finally, thankfully managing NOT to miss our final connection from Torino to Fossano (despite that the train arrived at different track than stated).

Lorenzo was waiting for us at the Stazione Fossano.