Well, I ended up not taking the bus and that probably was a mistake. I guess I had just missed one and it was going to be a half hour before the next. I ended up on the wrong tram line and by the time I got it all straightened out the bus probably would have been quicker. Oh well, that is why traveling is an adventure.

When I finally got to Troisdorf, I turn on my new GPS, a Garmin Nüvi 770 and started walking in the direction suggested by Google Maps. By the time I found the brewery, the GPS was still trying to find the satellites. Since I had had in on a little while earlier in Bonn, that seemed a bit long, Walking thru Troisdorf was not walking thru a skyscraper canyon.

Anyway, in a building next to the City Hall (Stadt Haus) was the Stadt Brauerei Troisdorf. In some German towns, the brewery is actually municipally owned, but in this cases it was a private brewery just next to City Hall. 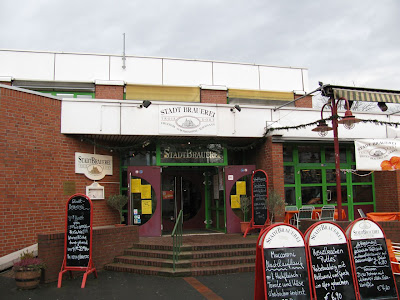 They brew four beers here, as shown on their sign -- even with pictures of the different glasses! 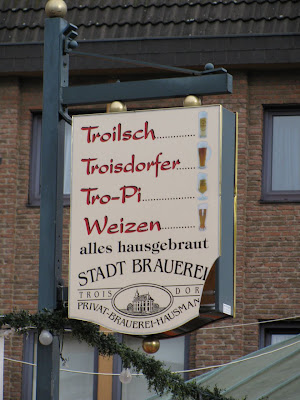 The four beers of Troisdorf

The inside was quite large, with at least two large rooms. Being as it was early on a Monday afternoon it was pretty empy. The brew house sat in the middle of the room as is typical in these modern brewpubs. 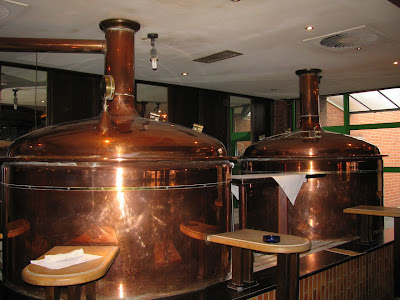 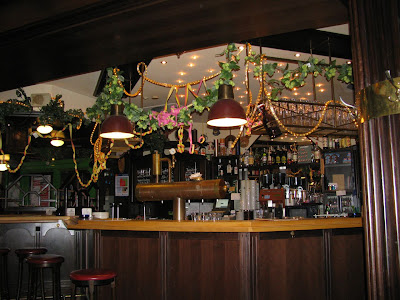 The bar
They served all the beers except the Weizen i .3 liter glasses, so I ordered one of each in order to do side by side comparisons. The weizen only came in a .5 liter glass and so I skipped it. 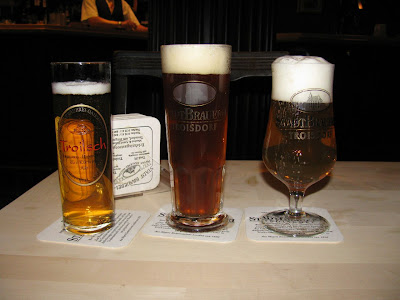 Three of the four beers of Troisdorf: Troilsch, Troisdorfer, Troi-Pi
I started with the Troilsch, the bastard nephew of Kölsch I'm come to try. The glass said "In the Kölsch Style" and had the tag line "Pure. Pale. Clear." It started out very much a Kölsch but it wasn't as dry in the finish as a Kölsch usually is. Usually a Kölsch is cold aged for a period of many weeks which helps attenuate the beer. I have a feeling a small brewpub such as this didn't have the capacity to age the beer that long. That is often true of American brewpubs as well.

Next up was the Troi-Pi, a pils. It was clean and dry (maybe that was what was using up the lagering tanks). I would have liked it better with a more bitter finish, but it was not out of line with many German Pils.

Finally came the Troisdorfer, a unfiltered amber lager. It also was a bit under attenuated, but it had a nice caramel malt finish that actually went well with the sweetness. Its not a beer I could drink a lot of (it would fill you up) but it was a very pleasant finish to my visit.

Then it was back to the train station to visit Siegburg.
Posted by The Mad Brewer at 5:27 AM