Today was going to be a rest day — for the bikes not for our livers. Bamberg’s version of Oktoberfest (in that it is a Volfestival) is called Sandkerwa. It is held in late August (i.e. now) and this is the 69th edition. All along Sandstrasse and many side streets of the Altstadt there are booths selling food, wine, snacks, and of course beer. Most of the Bamberg breweries have booths as do many of the breweries in surrounding villages.
The Schlenkerla tavern is in the heart of it and they turn the Dominikaner courtyard into a beer garden. We stopped there first. 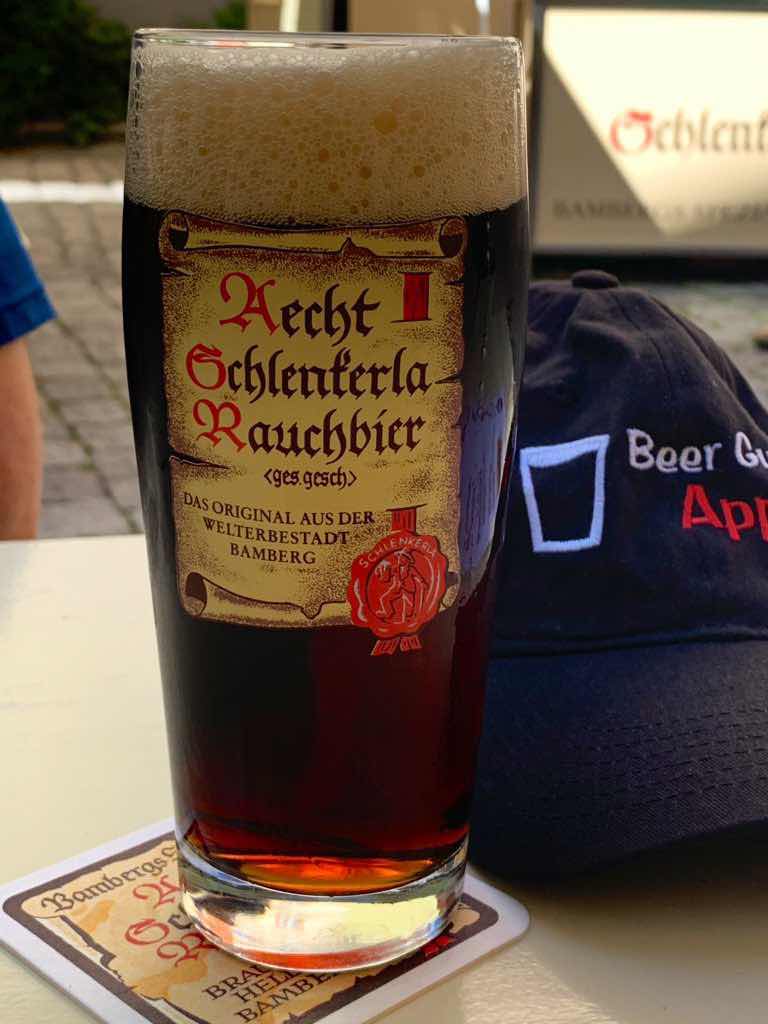 Of course, the beer is dispensed via gravity from a wooden barrel. 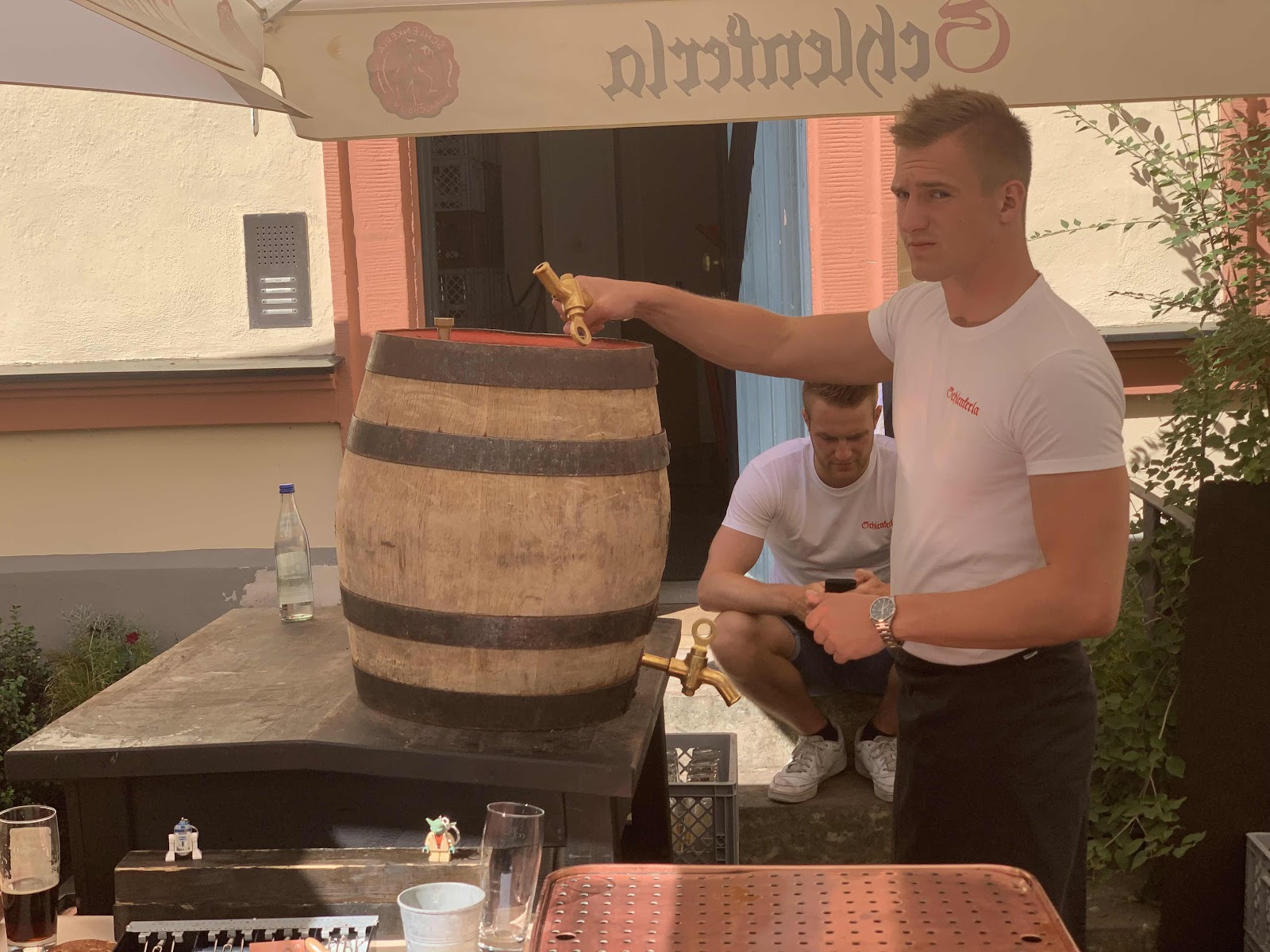 It was really comfortable siting there and I could probably have spent the whole afternoon there but then this would be a very short blog post. So we started exploring. I thought I had read that things kicked off at noon but many of the stands were not yet open. We finally stopped it at tent restaurant that was serving beer from Hausbräu Stegaurach, a relatively new brewery (last 10 years or so) but there is some question about the beers now being contract brewed. We tried the Lager and the Rauchbier. The Rauchbier was the more interesting of the two but both were in the “glad we had it, no need for another” category. 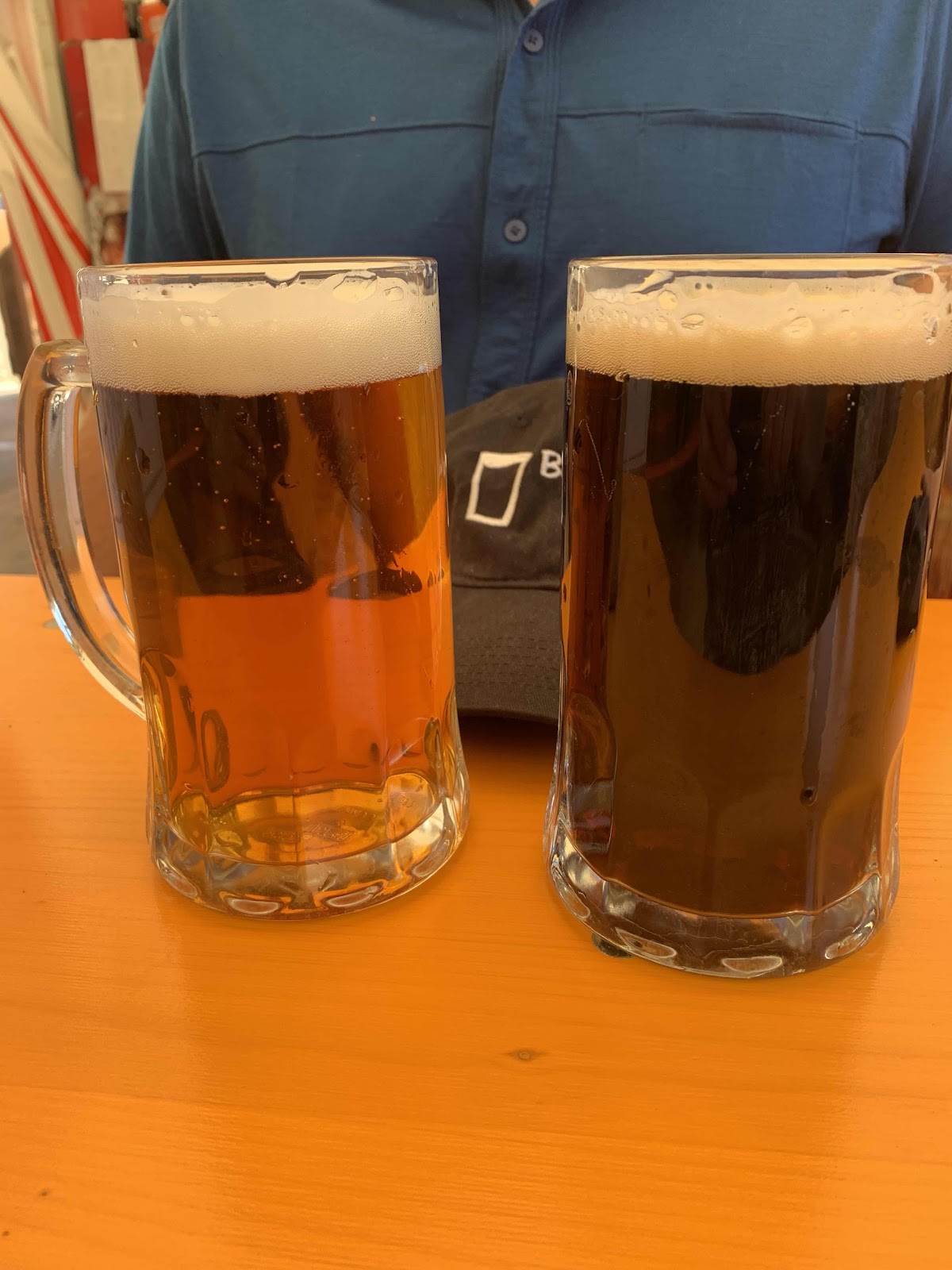 Walking around some more we came to a both selling Drei Kronen Schesslitz and also had a sign for the Hopfengarten Hopefen Gin. I had the Drie Kronen Lager and Bob though he ordered a shot of the Hopfen Gin but he ended up with like a quad shop with some sparking water and some sort of simple syrup. Just the thing you need at the start of a day drinking beer.
The gin was interesting — there we notes of juniper as you’d expect but lots of hop flavor and even some bitterness but that probably was from other “botanicals” in the gin. It was way more than we wanted but it was expensive enough we didn’t want to throw it away, so we bought a bottle of water, drank it, and then put then gin drink in it. We sipped at thru the afternoon. 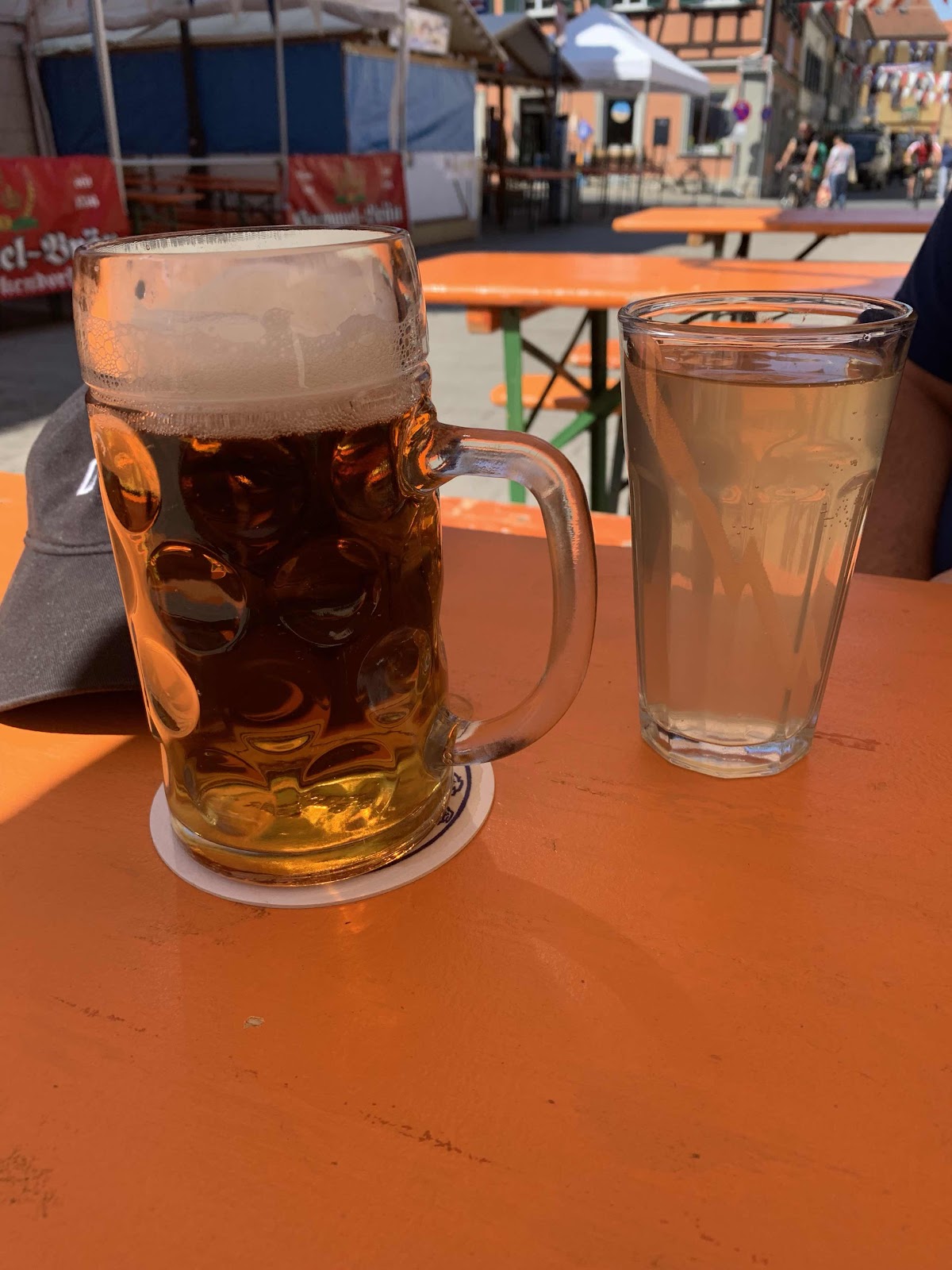 In our strolls we passed Metzgerei Liebold and picked up a couple of their famous Leberkäs Brötchen. A good price of Leberkäs and really good crusty roll just hit the spot. 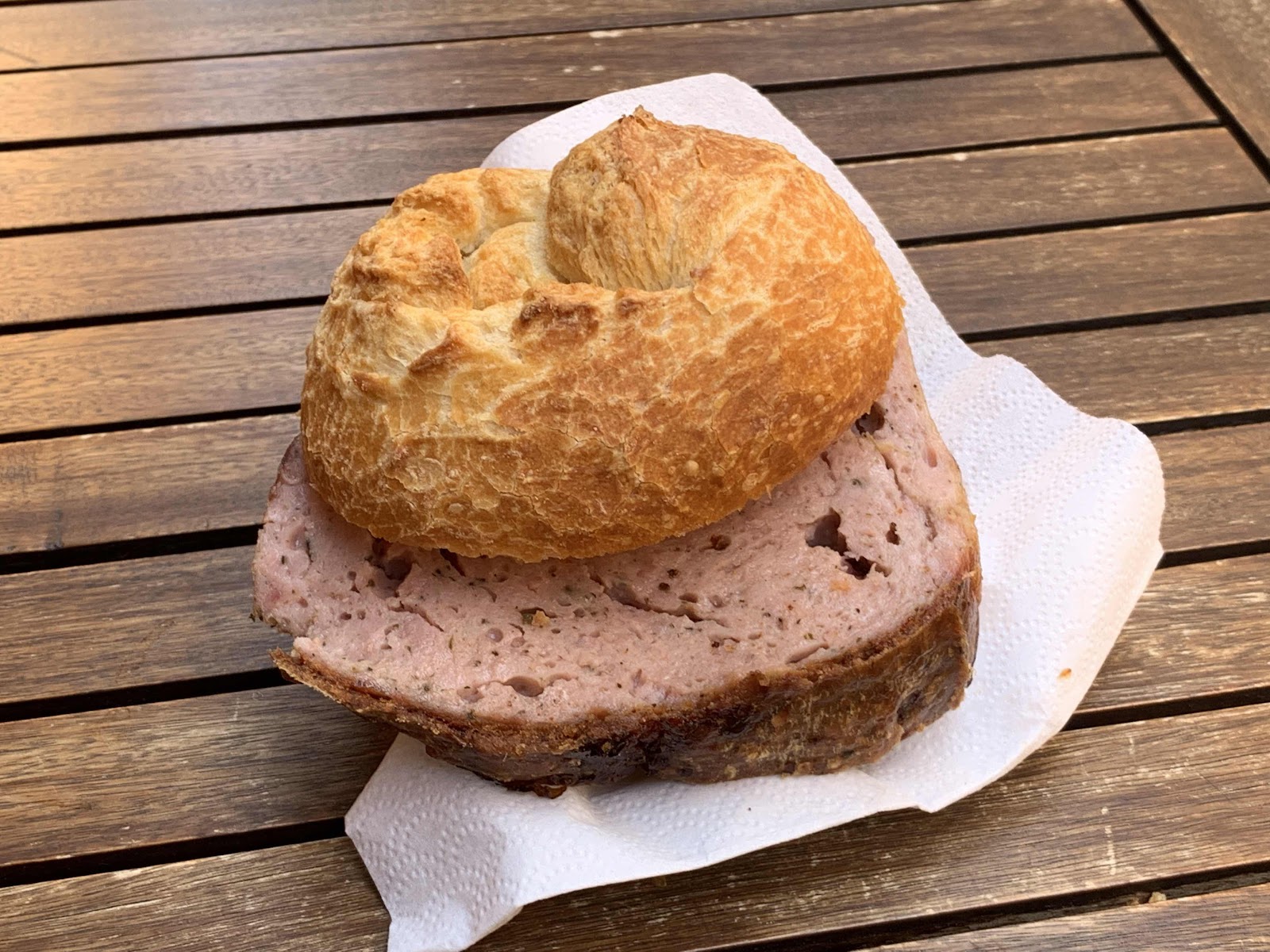 We next passed a stand selling Huppendorfer (Brauerei Grasser) and Lohndorfer (Brauerei Hölzlein). The Hölzlein beers have a reputation for some diacetyl and just about every twitter commenter mentioned that but it must have been the Leberkäs because I didn’t really detect any until the very end when the beer had warmed up a bit and even then it wasn’t objectionable. I am usually fairly sensitive to it. Oh well. 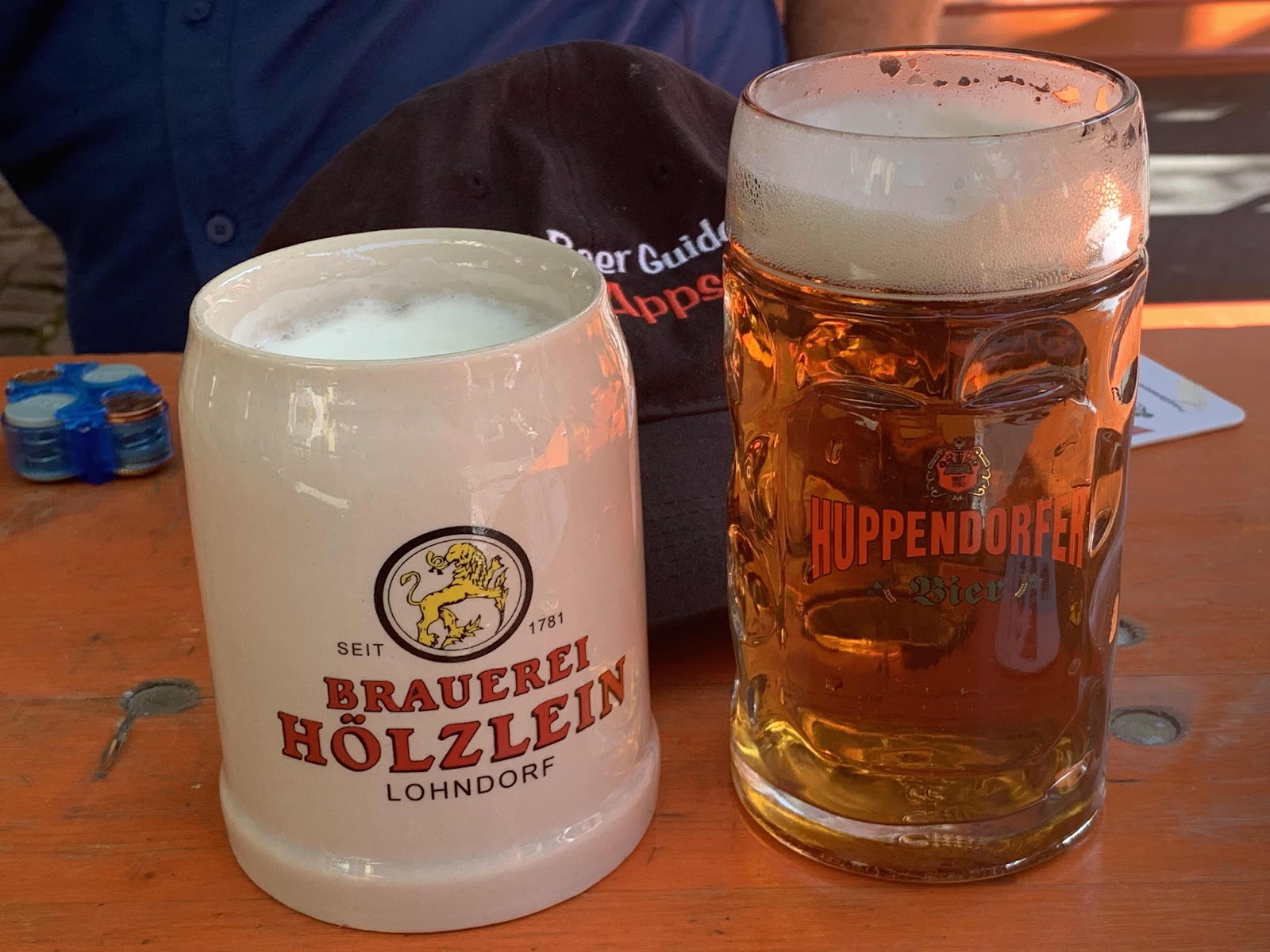 We passed a good old American style food truck that had and idea I thought brilliant and I hope they open a version in Los Angeles. 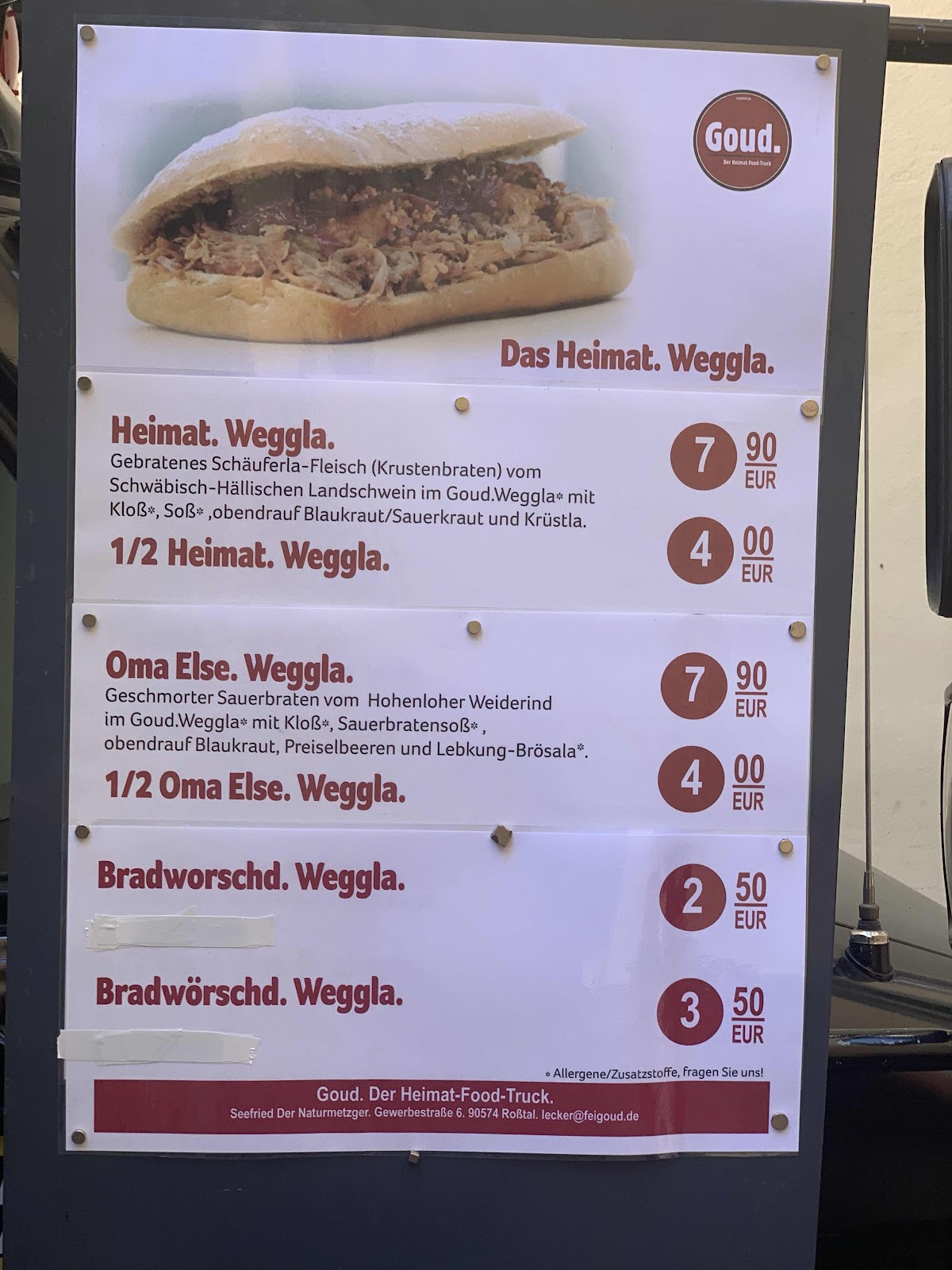 Take.good bread roll, add some meat from a Schäuferla, a slice of kloss, some gravy and sauerkraut on top and you have a traditional Franconian meal you can take with you. The Sauerbraten version was similar, except blaukraut instead of sauerkraut. This was the half size version. It was yummy. 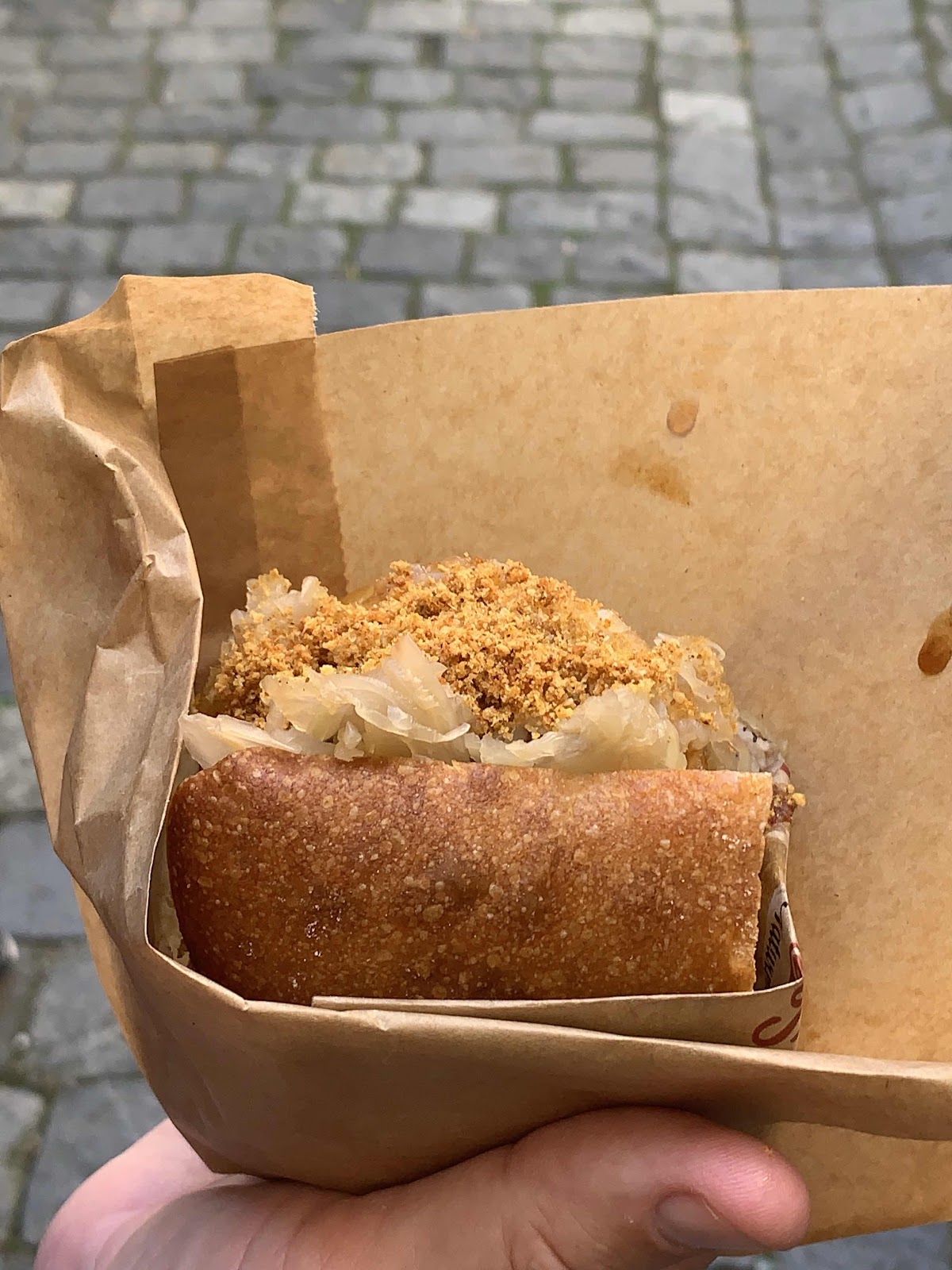 We wandered back around to the Spezial booth and they were now open so we sat and had a couple. Spezial, how I missed you. 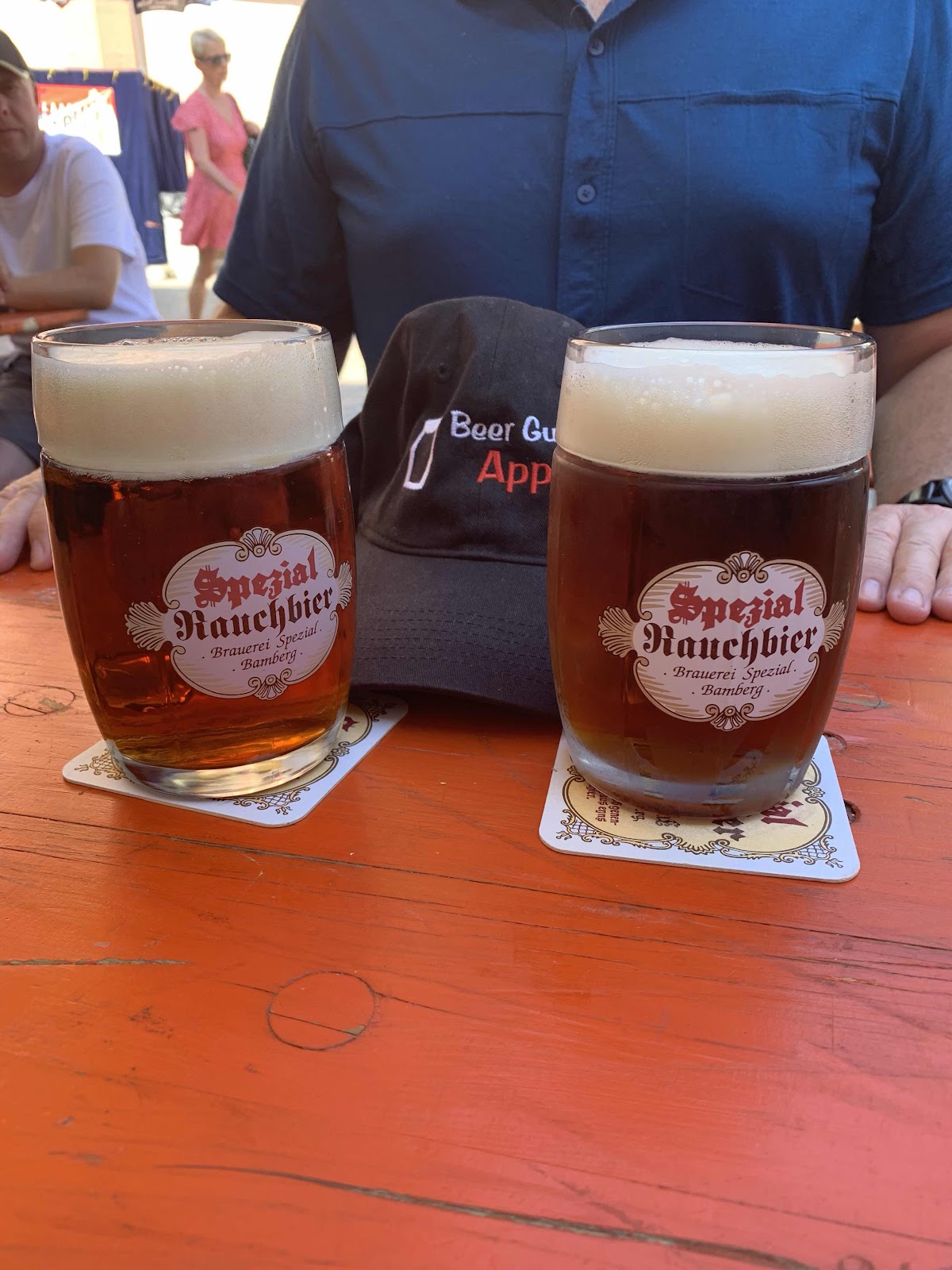 Across from the Spezial booth was one from Kapüziner one of the brands of the Kulmbach brewery, majority owned (if not more) by Heineken. There always was a rivalry between Bamberg and Kulmbach so this guy didn’t get a lot of business. It was a smart move pushing the wheat beer because the Kapüziner is a decent enough wheat beer.l I think he sold more bottles of what than beer while we watched. 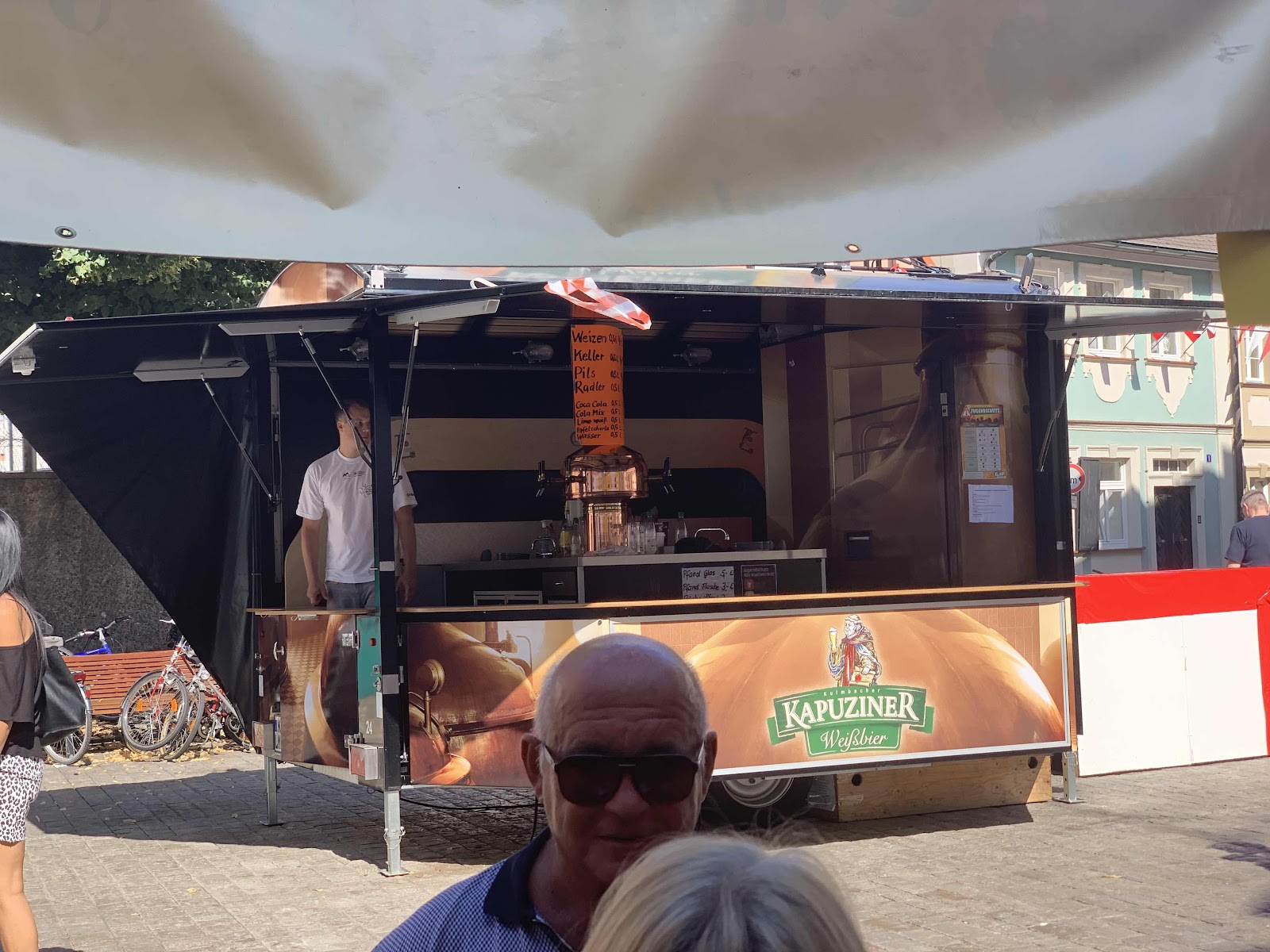 Down from the Spezial booth was one from Brauerei Will in Schederndorf and I remember liking their Landbier last time I was at Sandkerwa so bought a couple and brought them back to our table (everybody was doing that, so I assumed it was ok).
I like the beer, a bit malty/sweet but tasty. 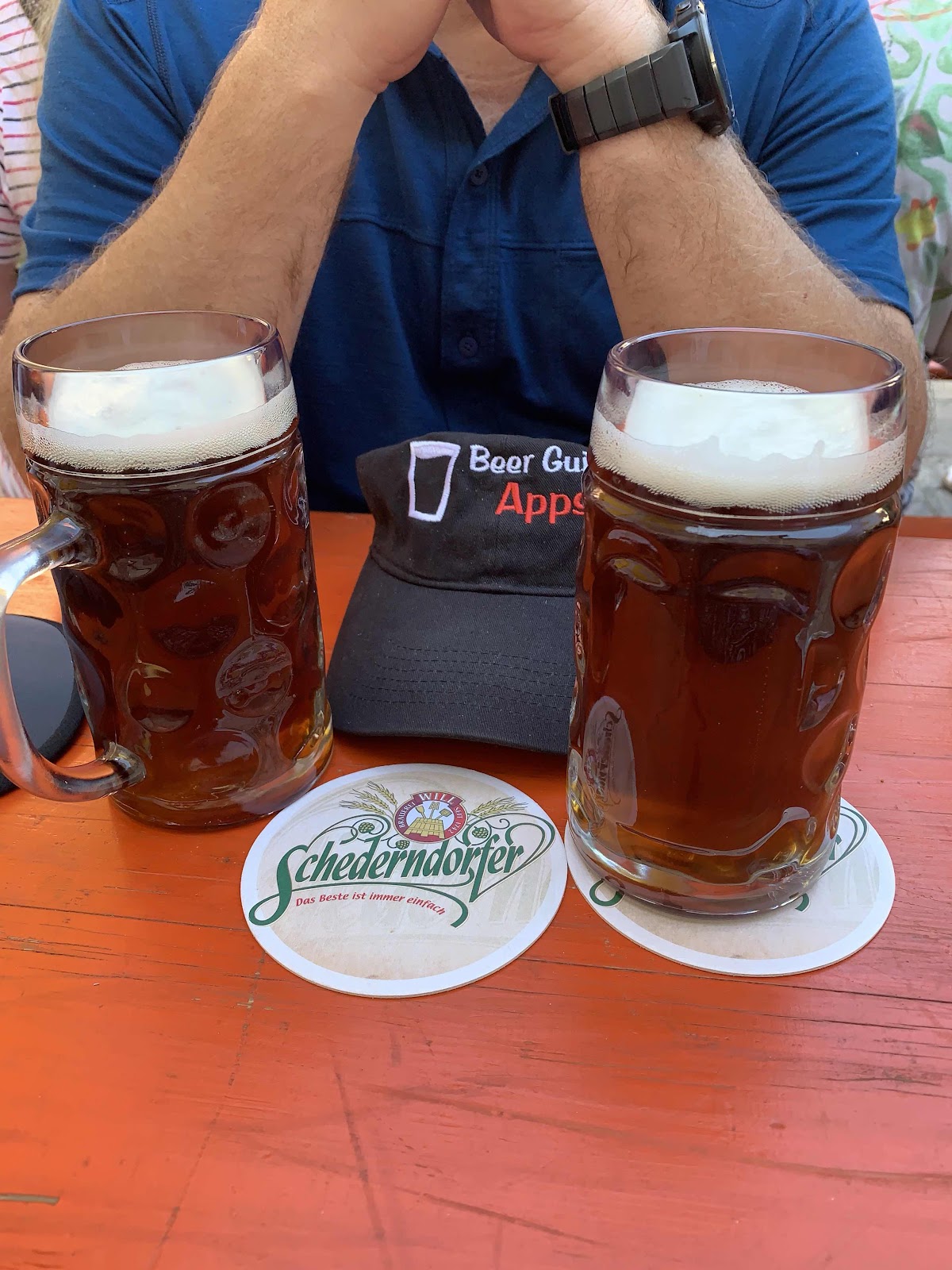 We decide to head back and as we cross back over the Obere Brücke we passed the stand of Brauerei Eichhorn of Dörfleins. The day we rode by there was the first day of their vacation so we didn’t get to try to the beer. 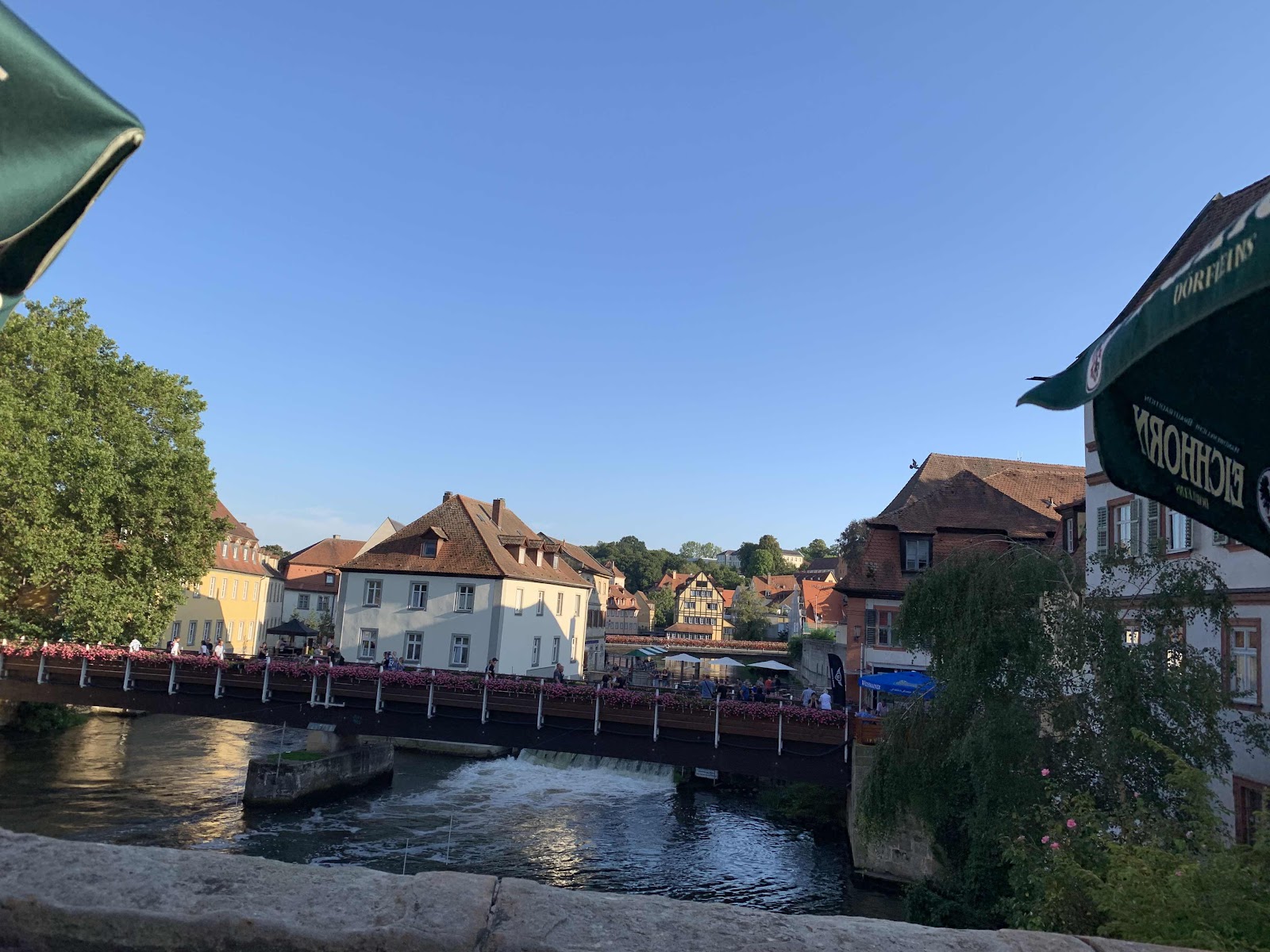 It was a fitting end to a fun day. We people watched while drinking our beers and the Altstadt was getting quite full of people. That is the one thing I hate about Sandkerwa — narrow streets crammed to the max with people (many who have had one — or six — too many beers) 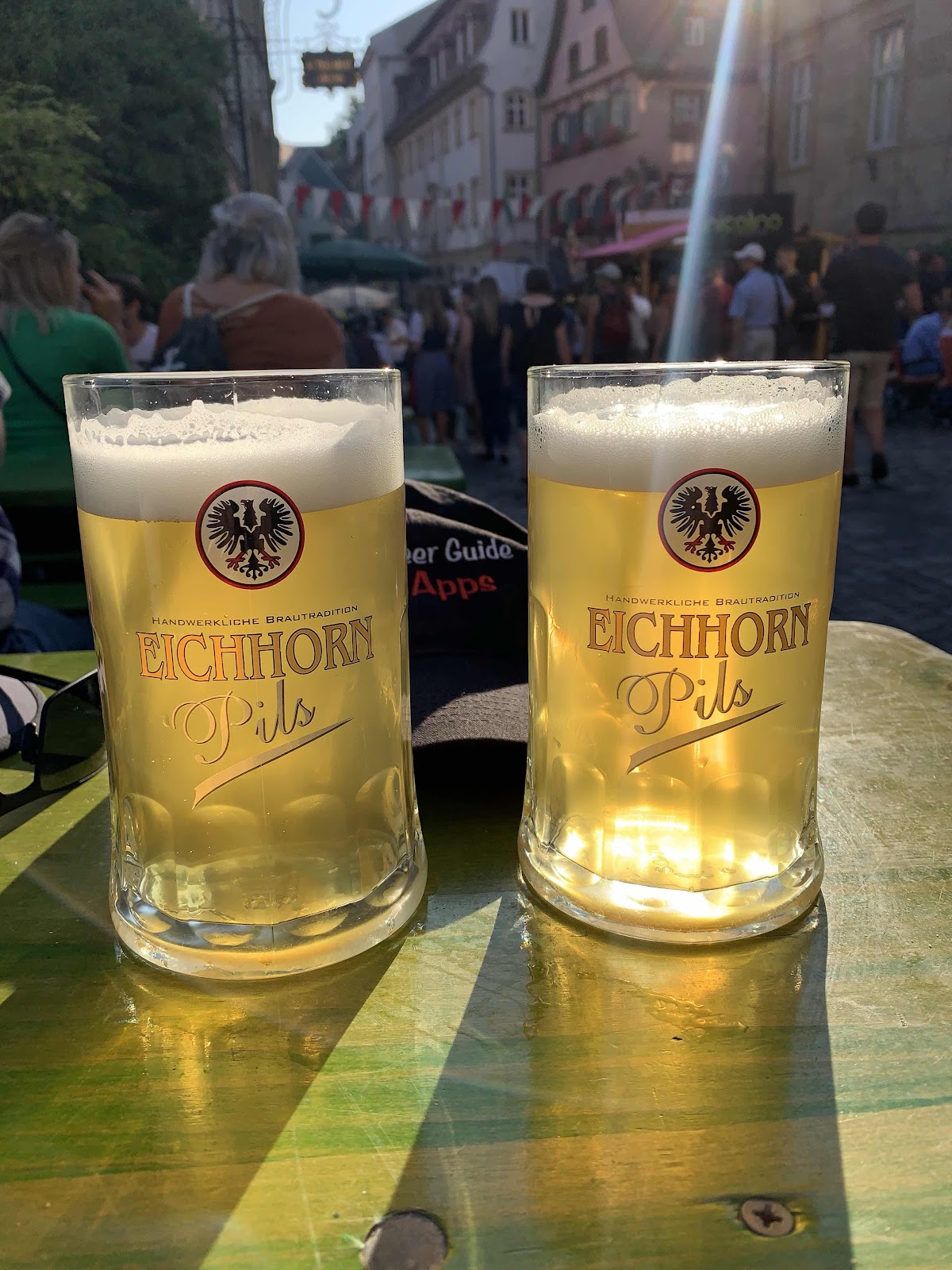 Back to riding tomorrow.

Email ThisBlogThis!Share to TwitterShare to FacebookShare to Pinterest
Labels: 2019, Bamberg